“Bailey County is a part of the Southern High Plains and has an altitude of 3,800 to 4,400 feet above mean sea level. Its 835 square miles of plain are surfaced by sandy loam covered with grasses and mesquite brush. The Double Mountain Fork of the Brazos River drains the northern parts of the county; other sections drain to numerous small playas.”

“The county was marked off from Bexar County in 1876 and named for Peter J. Bailey, an Alamo hero. Bailey and twenty-one other counties newly formed at the time were attached to Jack County for judicial purposes. In 1881 jurisdiction of Bailey County was transferred from Jack to Baylor County; then, in 1887, to Hale County; and in 1892 to Castro County. Settlement of Bailey County did not come early, since the XIT Ranch held most of its land from 1882 until the division and sale of the ranch in 1901.”

“Fencing in the county was done between 1883 and 1886, and the first cattle reached the ranch in 1885. Among the eight major divisions of the XIT, Bailey County land fell within the Spring Lake, Yellow House, and Bovina divisions. Even after the XIT sold lands in 1901, other large ranches (the VVN, the Snyder, the Bovina Cattle Company, the YL, and the Muleshoe) dominated the region. As late as 1900 the United States census counted only four people living in Bailey County.” 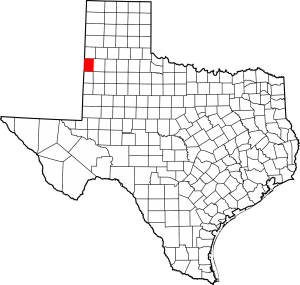 “The county developed rather quickly during the early twentieth century, however, as old ranchland was divided up and sold to farmers by land developers. From 1906 to 1912 the Coldren Land Company and the Vaughn Land Company held promotions in Bailey County. Midwestern farmers took special excursion trains to nearby Farwell, then were taken south and shown Bailey County lands selling at ten to twenty dollars an acre. In 1909 the county’s first irrigation well was dug. By 1910, seventy-one farms had been established in the county and the population had increased to 312.”

“A severe drought in 1910 drove away many of these early settlers, but others moved in to take their places, particularly after the Santa Fe Railroad extended its tracks through the county in 1913. Hoping to establish a taxing authority that could provide schools and roads for the area, residents decided to organize the county. They raised $1,500 to send delegates to Austin to lobby for a revision of the minimum county-voter requirement to seventy-five. Despite the opposition of ranchmen who feared that organization would bring taxation, the delegates succeeded. A county seat election followed in 1919, with Muleshoe carrying seventy-four of the 111 votes cast. By 1920 there were seventy-nine farms and 517 residents in Bailey County.”

“In 1920 little if any cotton was grown in the area, but by 1929 over 24,000 acres was planted in cotton and it had become the county’s leading crop. The first cotton grown in the area was sent to Plainview for ginning; but Bailey County got a gin in 1923. By 1924 there were 302 farms in the county, and by 1929, 758 farms had been established there. The expansion of cotton farming continued in the county even during the years of the Great Depression, when cotton farming in other parts of the state suffered severe declines.”

“In the early 1990s the county had 160,000 acres of irrigated lands and was among the leading counties in agricultural income. It has been said that Bailey County “is one of the few areas in the United States that can produce varying crops such as cotton, wheat, corn, grain, sorghums, soybeans, castor beans, hay, peanuts, cabbage, lettuce, peas, and beans.” About 40 percent of agricultural receipts derive from livestock. Manufacturing income in 1980 was almost $2 million, from farm tools.”

“Communities in Bailey County include Baileyboro, Bula, Circle Back, Enochs, Goodland, Maple, Progress, and Needmore. Muleshoe (population 5,078), the largest town in the county, hosts the Mule Days festival each August and the county fair every September. Muleshoe National Wildlife Refuge is a major recreation site.”

I was the guest of Muleshoe and Bailey County on July 27, 2013 and returned to rephotograph the courthouse on August 16, 2016.