“The county was named for casino con slot book of ra deluxe apk, the empresario who was consul general to Paris for the Republic of Texas.”

“The area now known as Castro County was once occupied by Apaches, who were forced out of the region by Comanches around 1720. The Comanches ruled the Panhandle-Plains area until they were defeated by the United States Army in the Red River War of 1874. The Indians were confined to reservations in Indian Territory during 1875 and 1876. Buffalo hunters arrived in the region in 1876 and by the early 1880s had eliminated the last remnants of the formerly huge herds. The Texas legislature established Castro County in 1876.”

“Ranchers began to arrive in the county in the early and middle 1880s. James W. Carter brought his family in 1884 and established a medium-sized ranch of seventy-two sections, the 7-UP Ranch, in the southwestern part of the county on Running Water Draw. Other ranches, headquartered in surrounding counties, controlled Castro County lands. The XIT Ranch held some land in the southern and western parts of the county, while the T Anchor Ranchcontrolled some of the land in the north.” 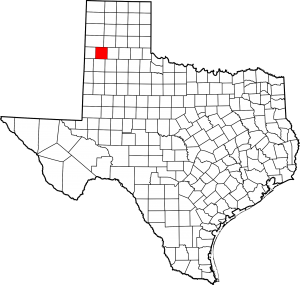 “In 1888 Lysius Gough filed on land south of the site of present-day Dimmitt, and in 1889 James L. Beach and his six sons from Grayson County each filed on sections of land in the same general area and dug dugouts, confident that a county seat would be soon be established nearby. In 1890 only nine people lived in Castro County; most of them were members of the Carter family.”

“Between 1890 and 1900 Castro County slowly developed but remained a sparsely populated stock-farming and ranching region. Some settlers arrived in the nineties to claim land for agricultural or commercial uses. On March 4, 1890, the Bedford Town and Land Development Company was formed in Grayson County with H. G. Bedford as president. On May 27, the company, eager to establish a county seat for Castro County, bought a section of land near the center of the county, dug a well, built a water tower, and platted a town. The new town was called Dimmitt because of the close bond between H. G. Bedford and the Rev. W. C. Dimmitt, a partner in the venture.”

“Castro County was formally organized by an election on December 21, and Dimmitt was designated the county seat. By 1900, seventy-six farms and ranches in the county encompassed 191,362 acres of land (including 12,131 acres classified as “improved”), and the county’s population had risen to 400.”

“Soon after 1900 the XIT and other Panhandle ranches began to sell lands to arriving settlers, and the advent of German farmers in the eastern part of the county between 1902 and 1906 helped to stimulate farming on a large scale. The German immigrants came to Castro County as a result of the colonization efforts of a Catholic priest, Father Joseph Reisdorff. Reisdorff established a town, Nazareth, in 1902 to serve as the center of his new colony.”

“The Germans and other newcomers took up both farming and stock raising, and farming gradually grew in importance over the years. Meanwhile, a rapid rise in agricultural mechanization, coupled with a rising demand for agricultural products in the 1920s, helped to stimulate the county’s farm economy. The number of farms in the area consequently grew steadily between 1900 and 1930. By 1910, 327 had been established in Castro County, 365 by 1920, 521 by 1925, and 751 by 1930.”

“After World War II, however, the county’s economy began to expand again as underground irrigation water began to play an important role in the local farming economy and farming acreage increased. By the 1980s more than 400,000 acres of Castro County (over 70 percent of county lands) was under cultivation, with over 300,000 acres irrigated by underground water. As the farming economy grew, the county prospered.”

“Railroads came into the area relatively late. The county’s only rail line is a branch of the Fort Worth and Denver Railway built from Plainview to Dimmitt in 1928. The Pecos and Northern Texas Railway, an Atchison, Topeka and Santa Fe subsidiary, built across the far northwestern corner of the county in 1898 but made no real contribution to the local economy.”

“By the 1980s Castro County was ranked as one of the state’s most productive agricultural counties. Its yearly average crop, valued at over $195 million, consisted principally of corn, wheat, sorghum, cotton, soybeans, sugarbeets, and vegetables. The county maintains several large vegetable-processing plants. The cattle feedlot industry developed on a large scale after the 1950s and reached a capacity of over 200,000 head.”

“As of 2014, 7,781 people lived in the county. Most people in Castro County live in its towns and communities, including Nazareth (population, 303) and Hart (1,088). Dimmitt, the county’s largest town and seat of government, had a population in 2014 of 4,375, and hosts Castro County’s yearly Harvest Days festival.”

Castro County was formally organized after an approval vote on December 21, 1891. That same year, Dimmitt was chosen as the new county seat and a site was quickly set aside for the town square. A local leader, J.N. Morrison, offered his office for temporary court facilities while the county’s first courthouse was being constructed. That project finished the next year.

The 1892 courthouse was a two-story, wooden structure with a central cupola and small, corner towers. The Texas Historical Commission describes its architecture as being part of the “Italianate” school. Unfortunately, no pictures of it survive.

Lightening struck the courthouse in 1906, and the subsequent flames brought it to ruin. 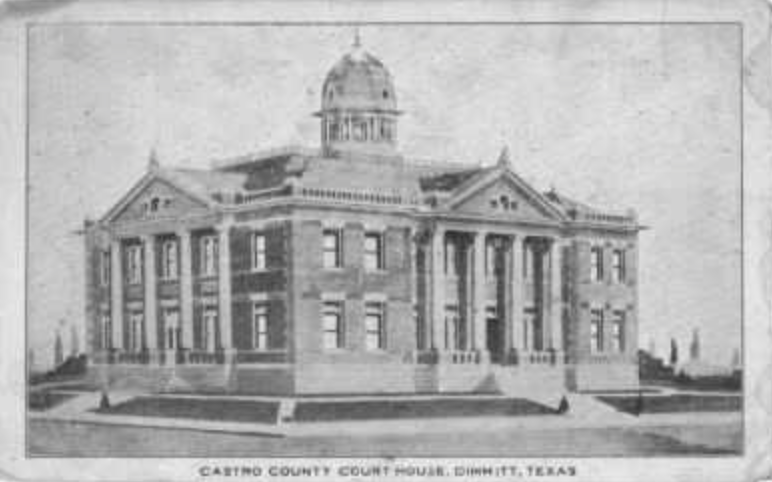 The next courthouse was much larger, and took approximately two years to complete. Constructed of brick with a central dome, it was dedicated at a community picnic in 1908. Neither the information of who the architect(s) was/were nor the contractors survives/is readily available.

All I can tell you about it is that it was razed in the 1930s to usher in a Works Progress Administration creation. 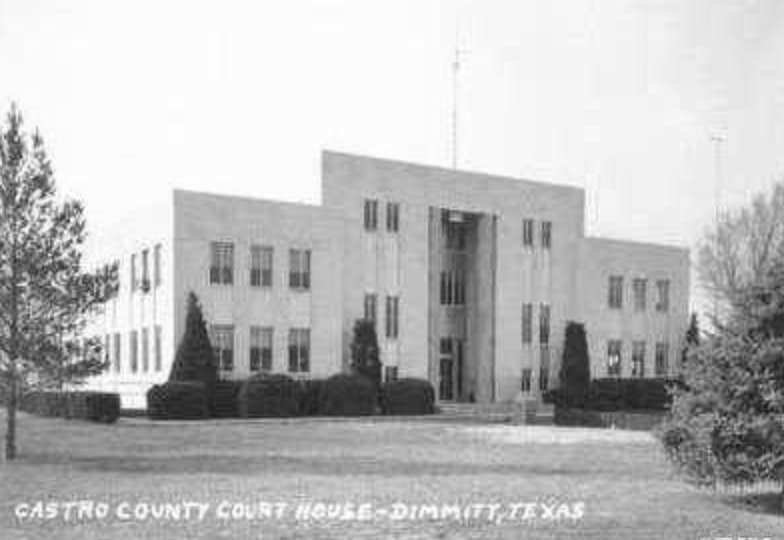 The WPA arrived in Castro County at the end of the Thirties to implement a design of Moderne pragmatists Townes & Funk. Its Art Deco elements were very popular in this period, and are visible among many of this courthouse’s contemporaries across the state. This one is made of sandstone.

The Texas Historical Commission describes it as:

“3-story, center building with 2-story wings on either side set forward a few feet. Entrance bay recessed the full height of the building with 2 modern fluted columns (no capitals). The windows are all decorative-glazed casement windows[.]“ 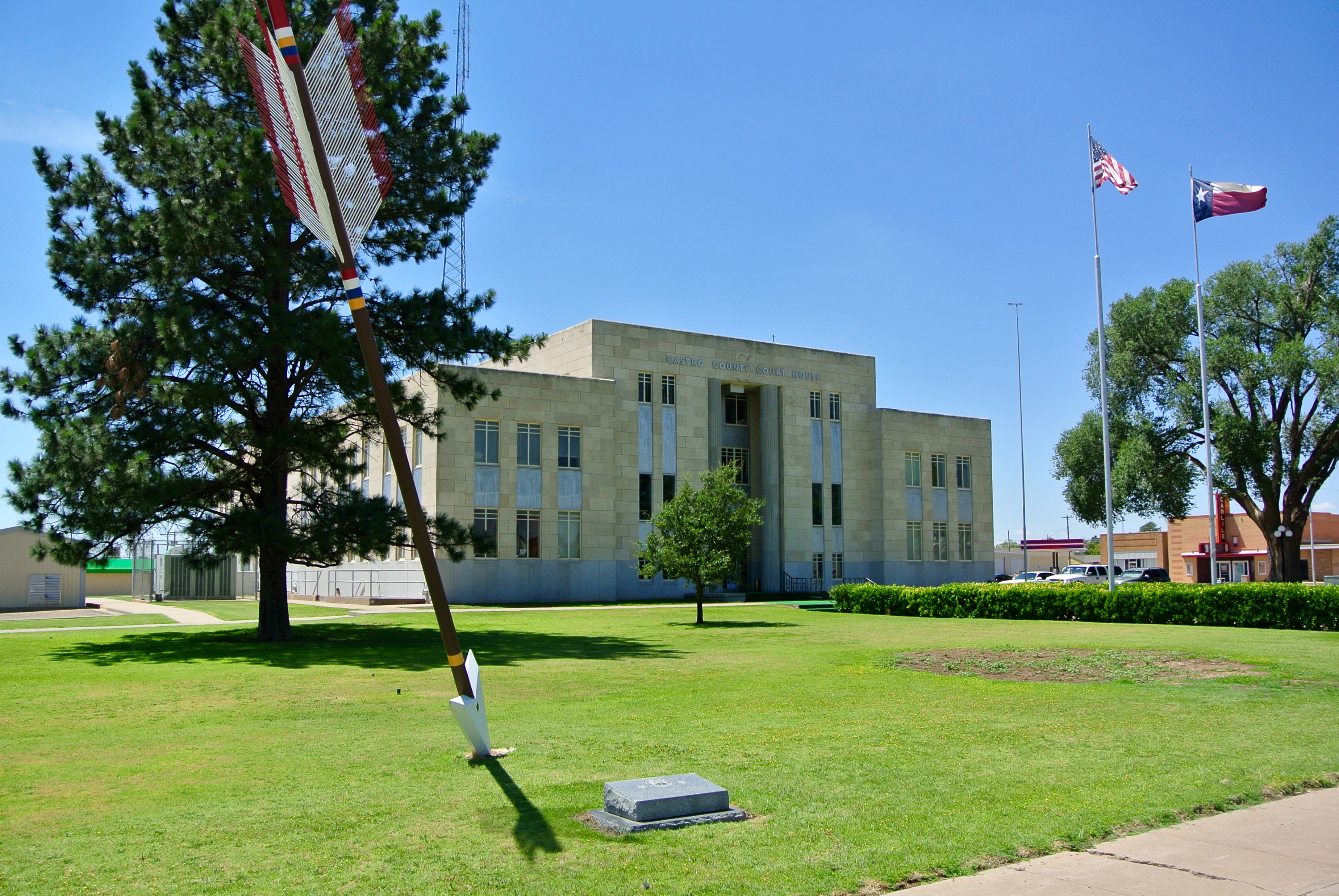 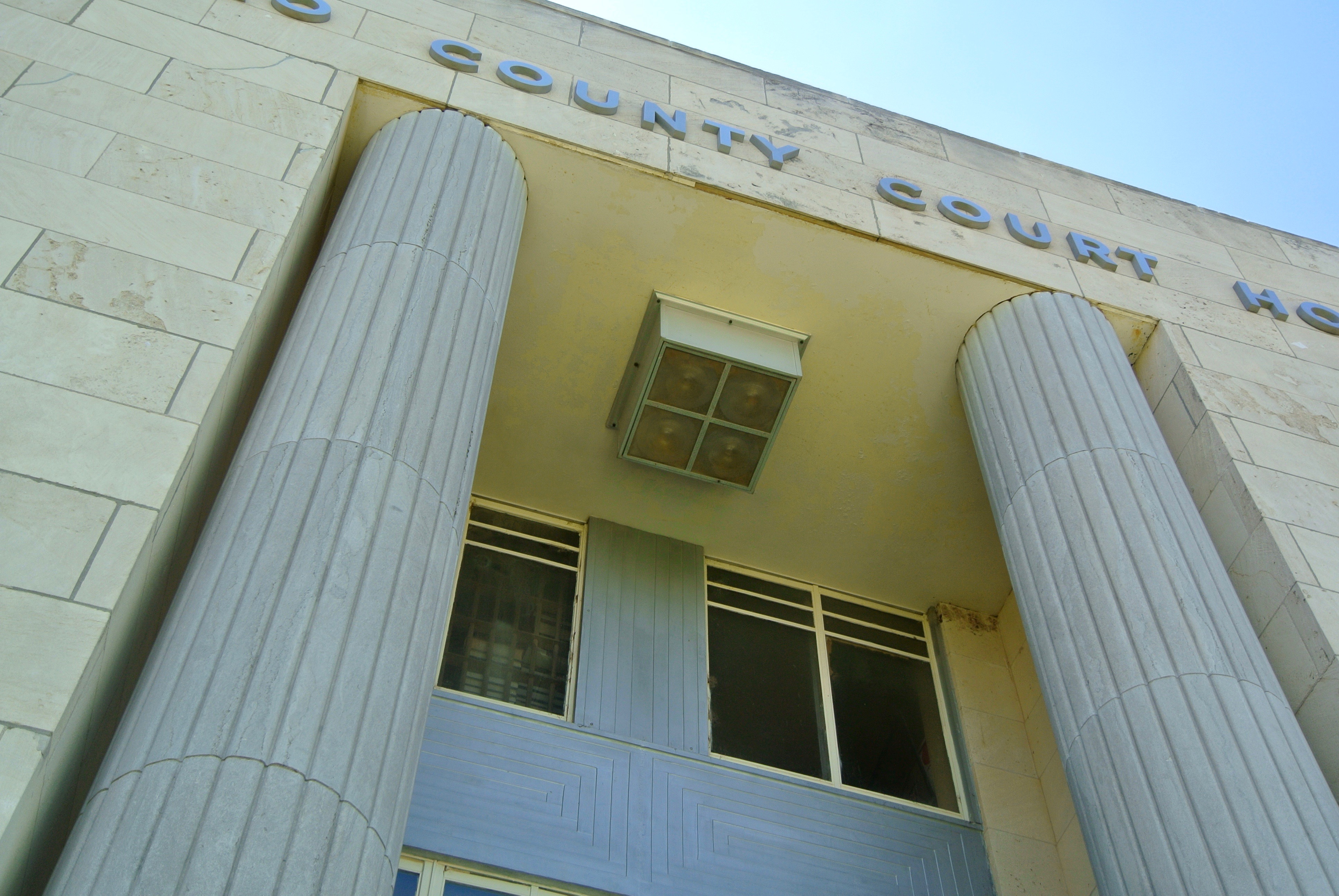 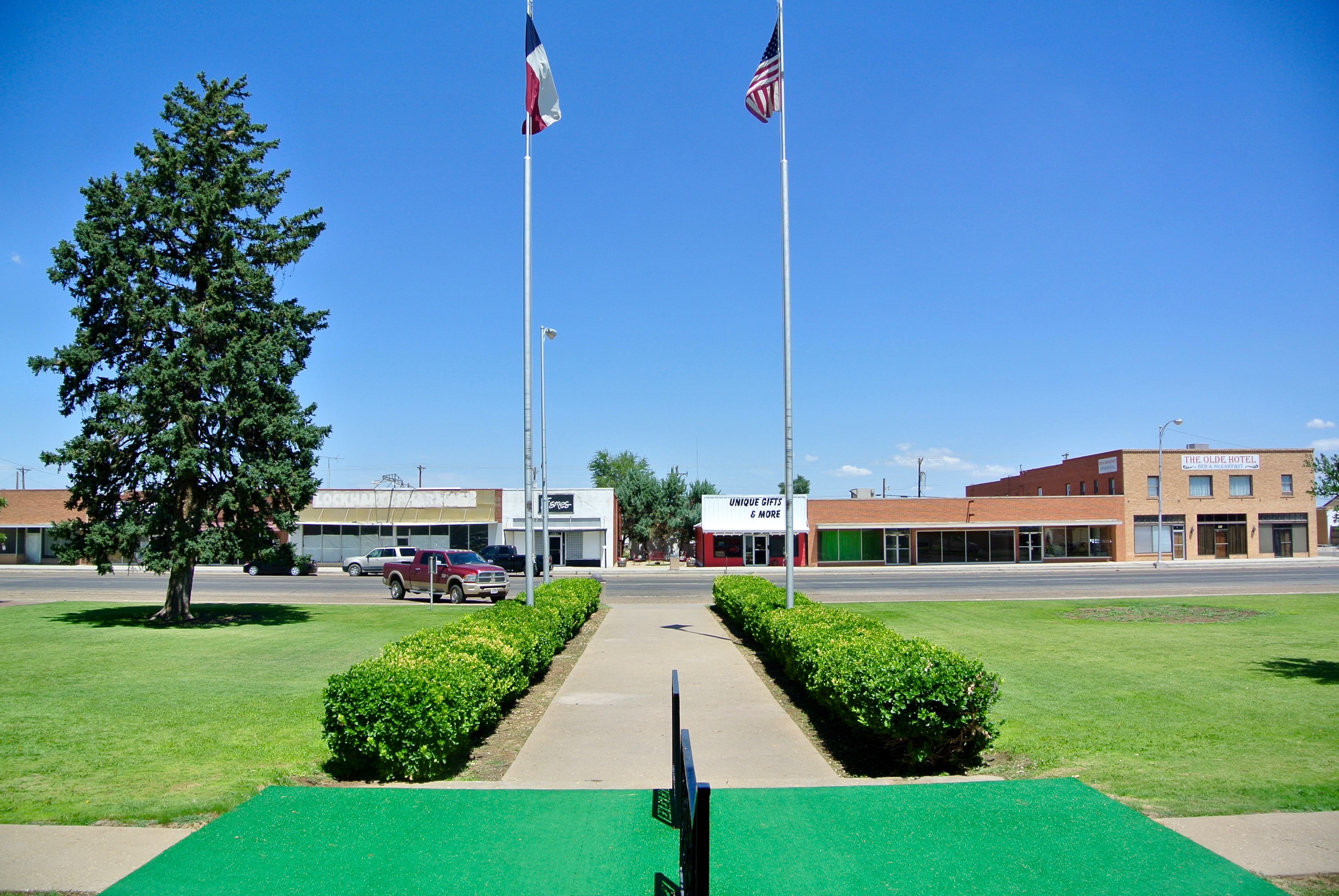 Bedford Street, as seen from the front doors

Art-Deco elements above the front doors… 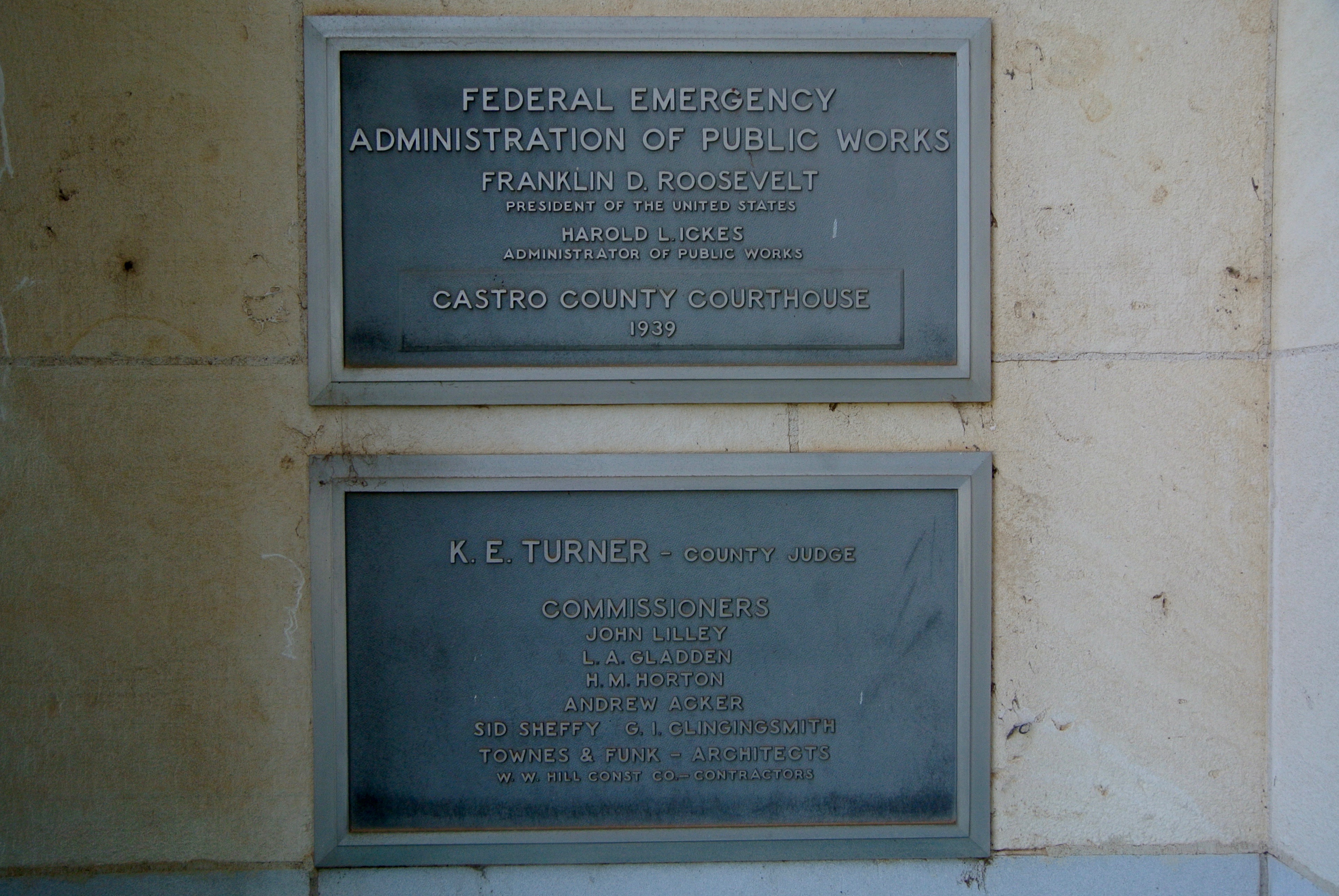 …and a little bit of history nearby too 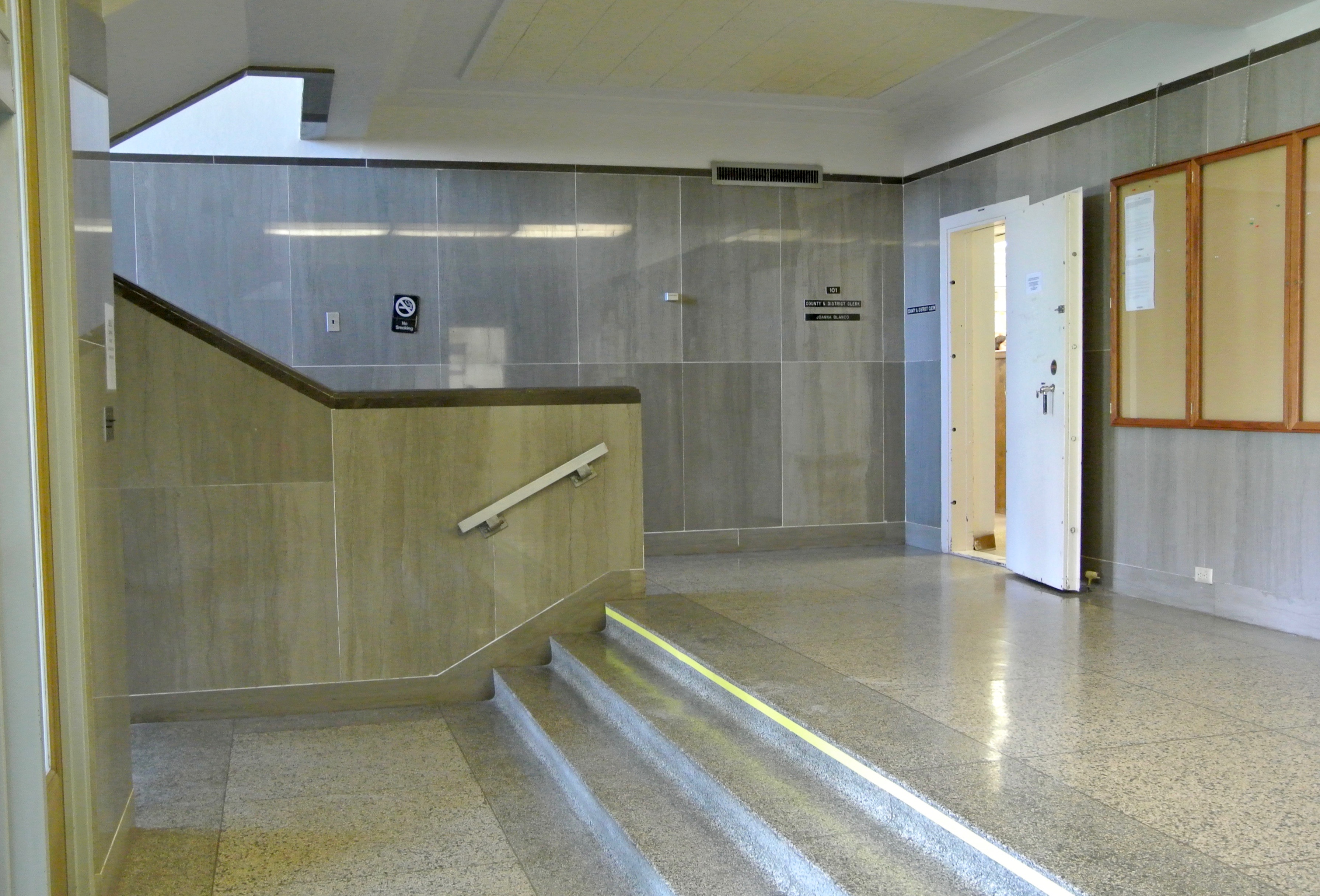 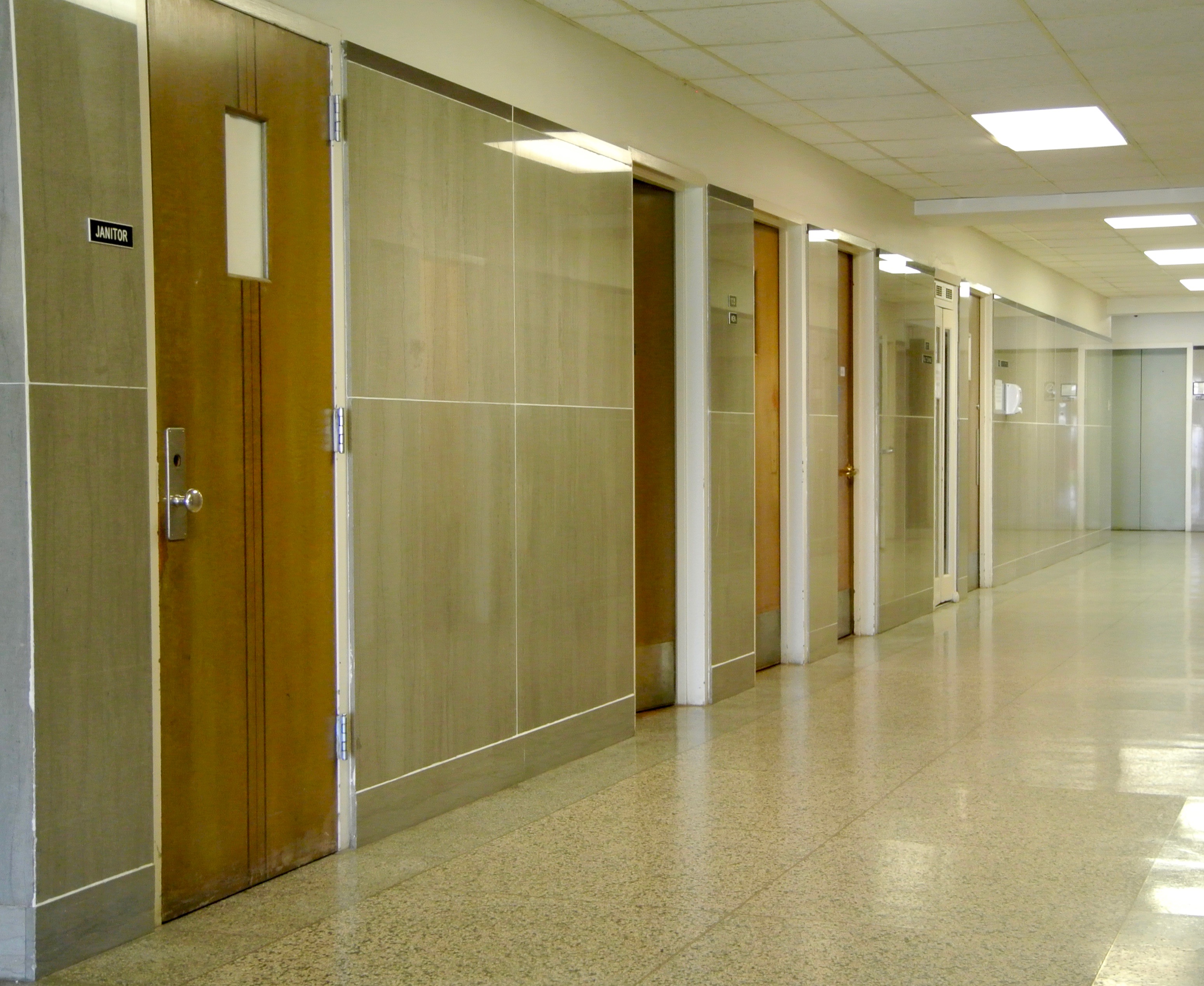 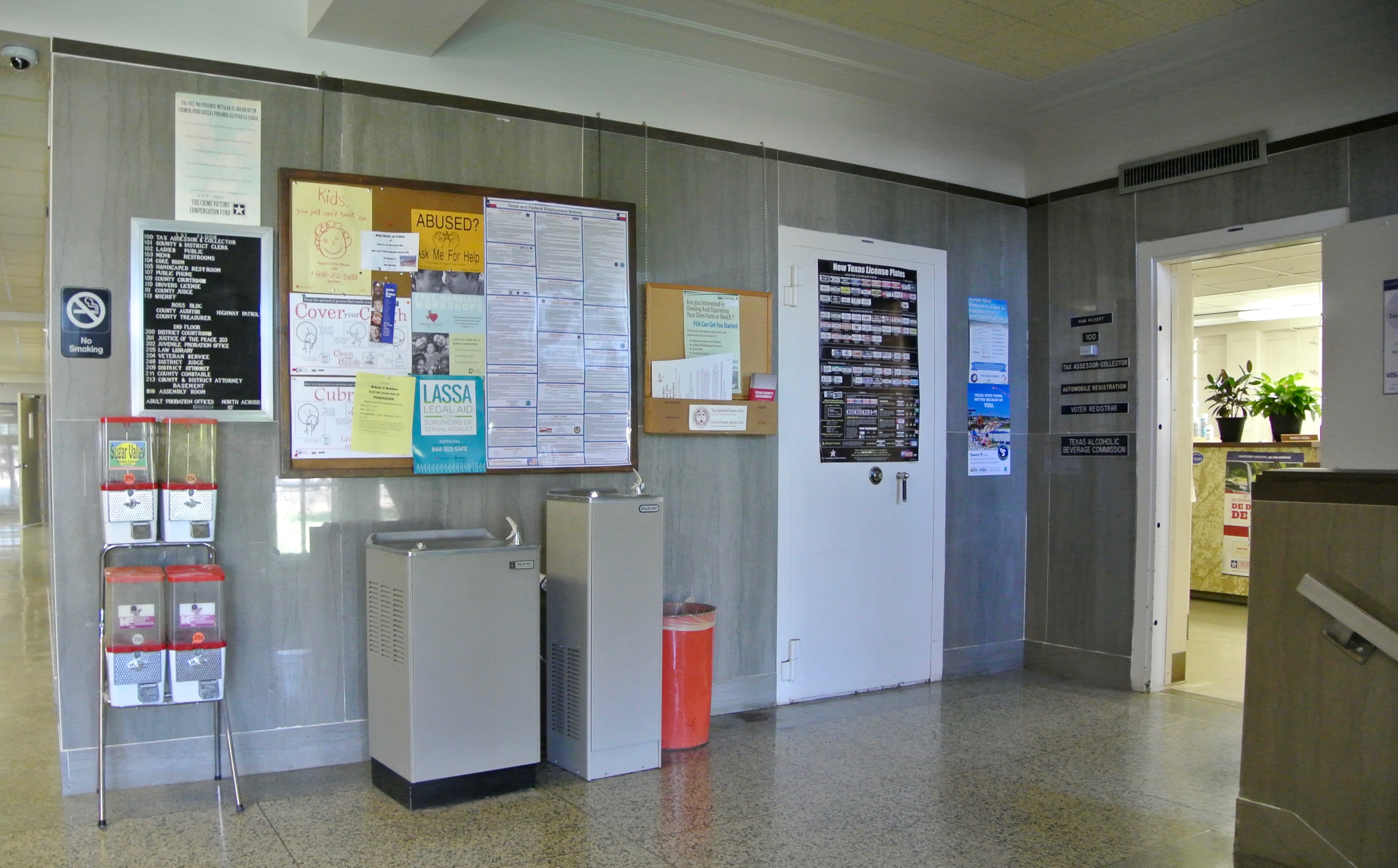 A cross-section of county government 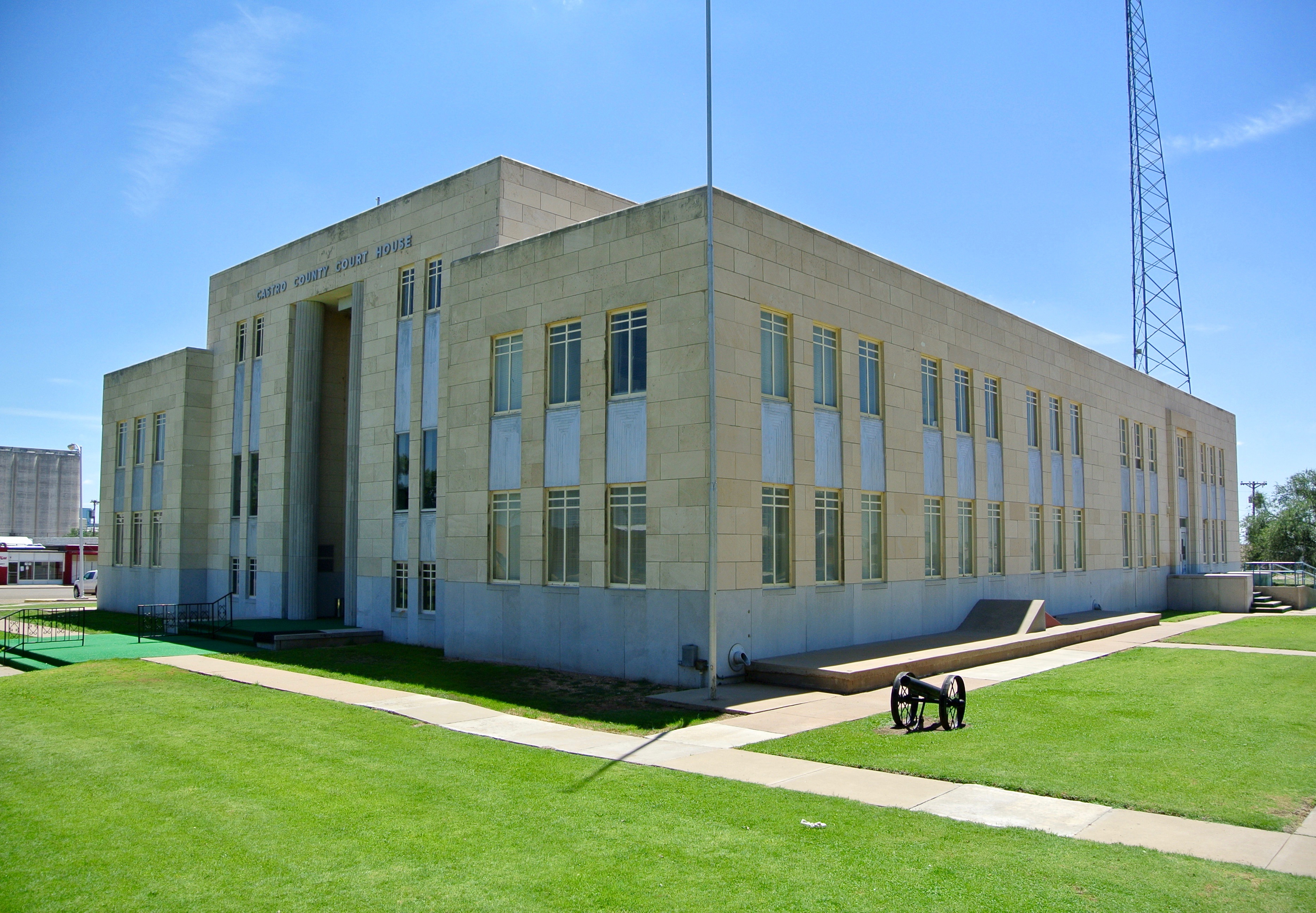 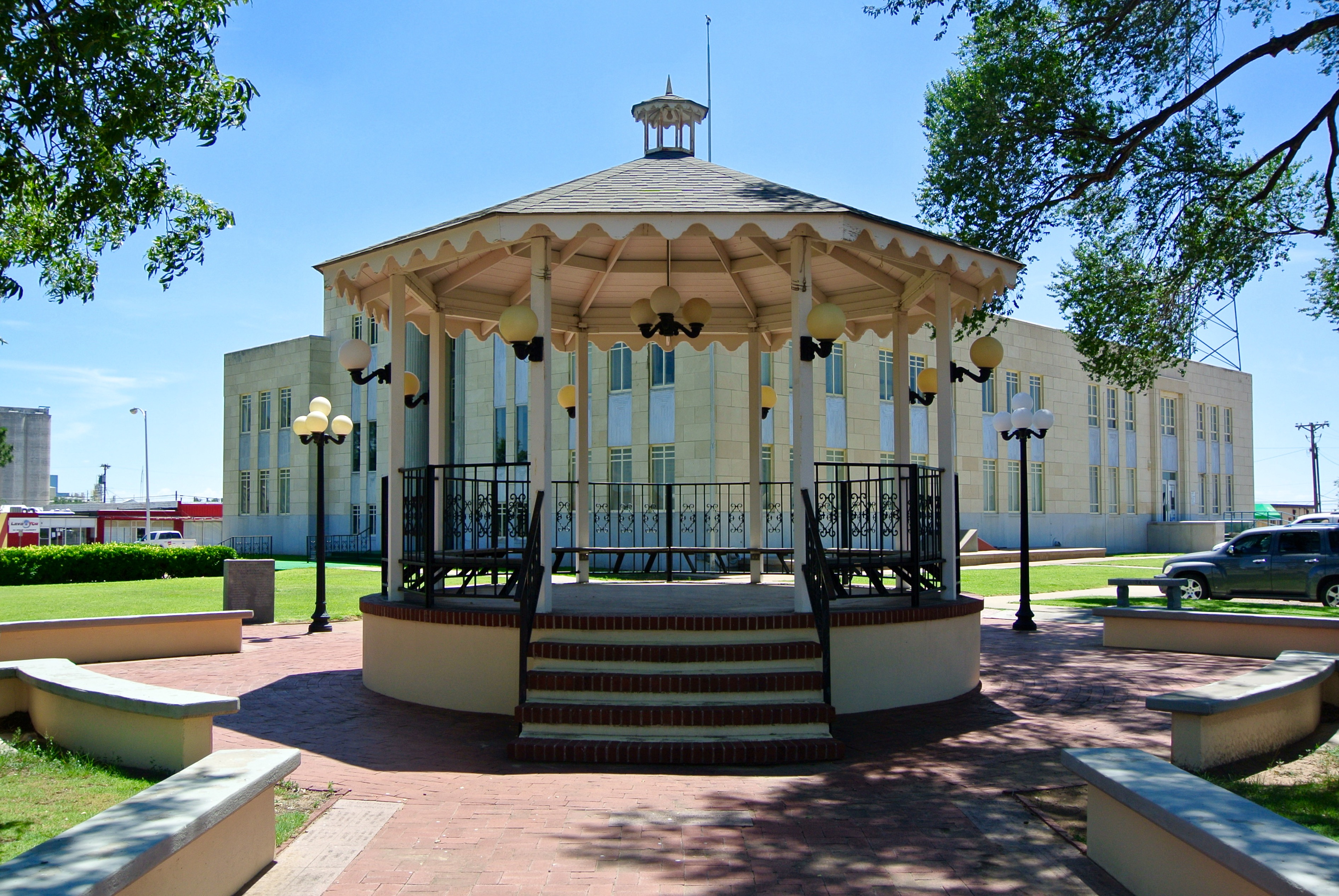 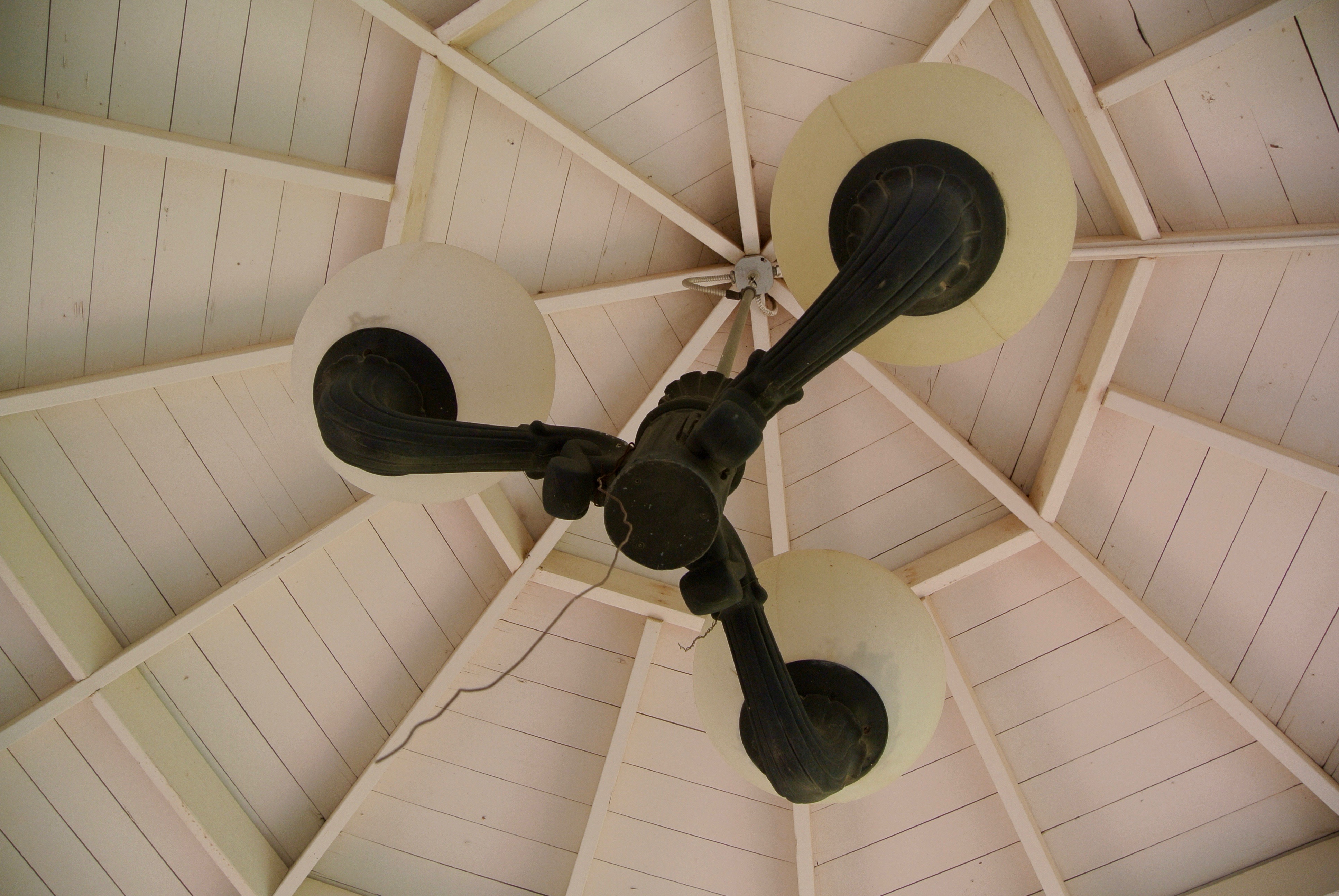 If this gazebo could talk… 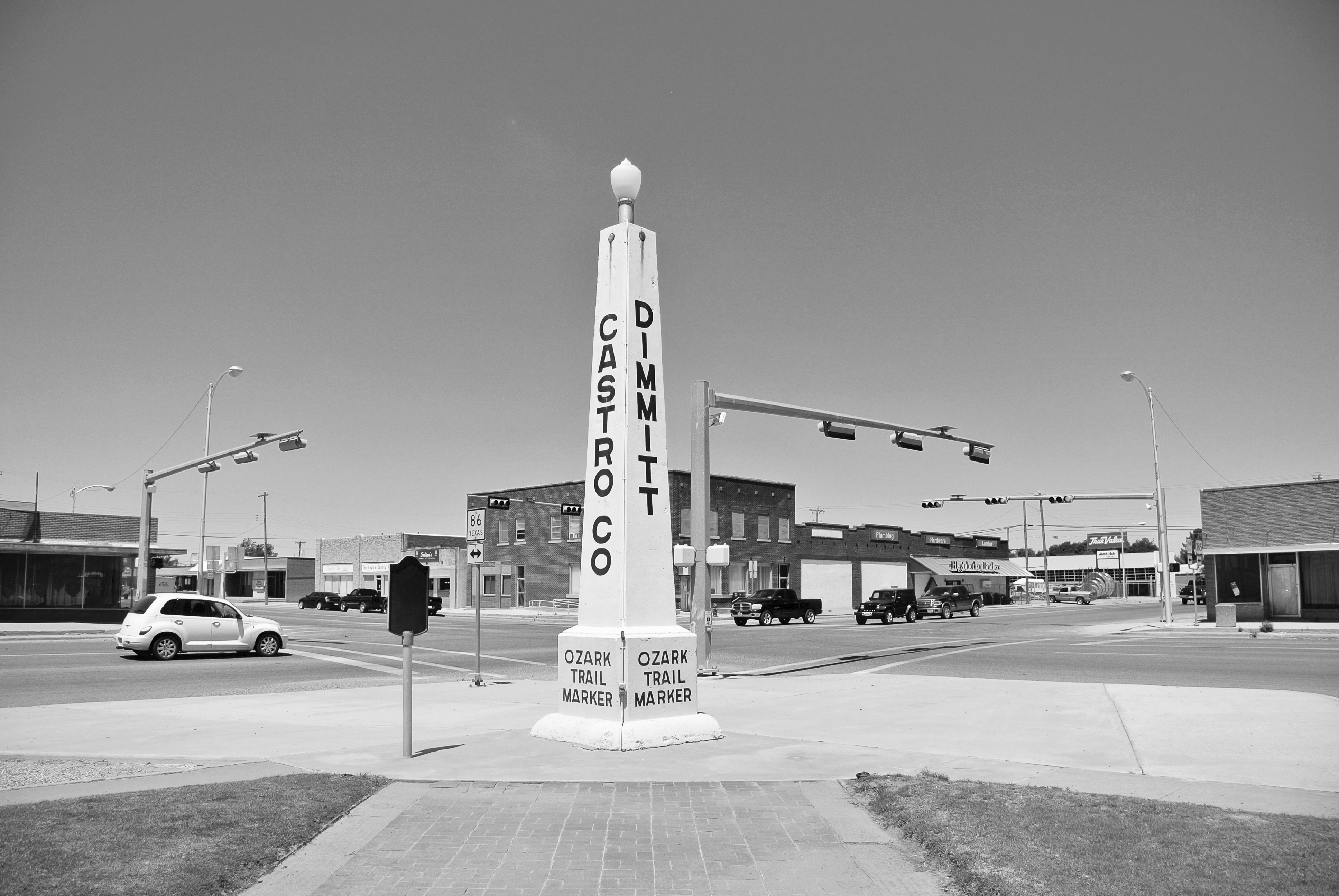 Looking from the northwest corner gazebo, towards the intersection of Bedford & Broadway 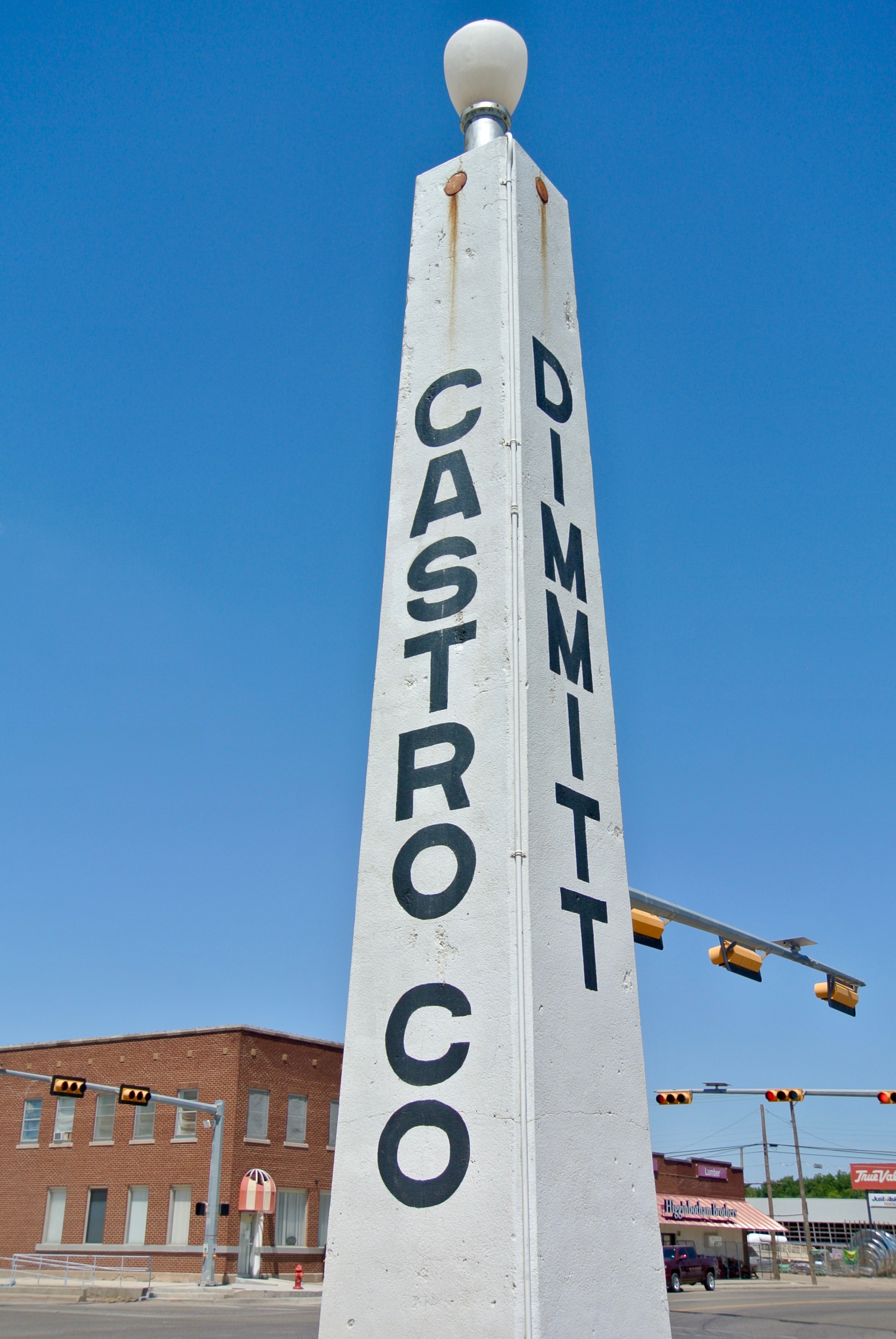 This is one of several markers found throughout the Panhandle that marks the “Ozark Trail”. You can read more about them here. 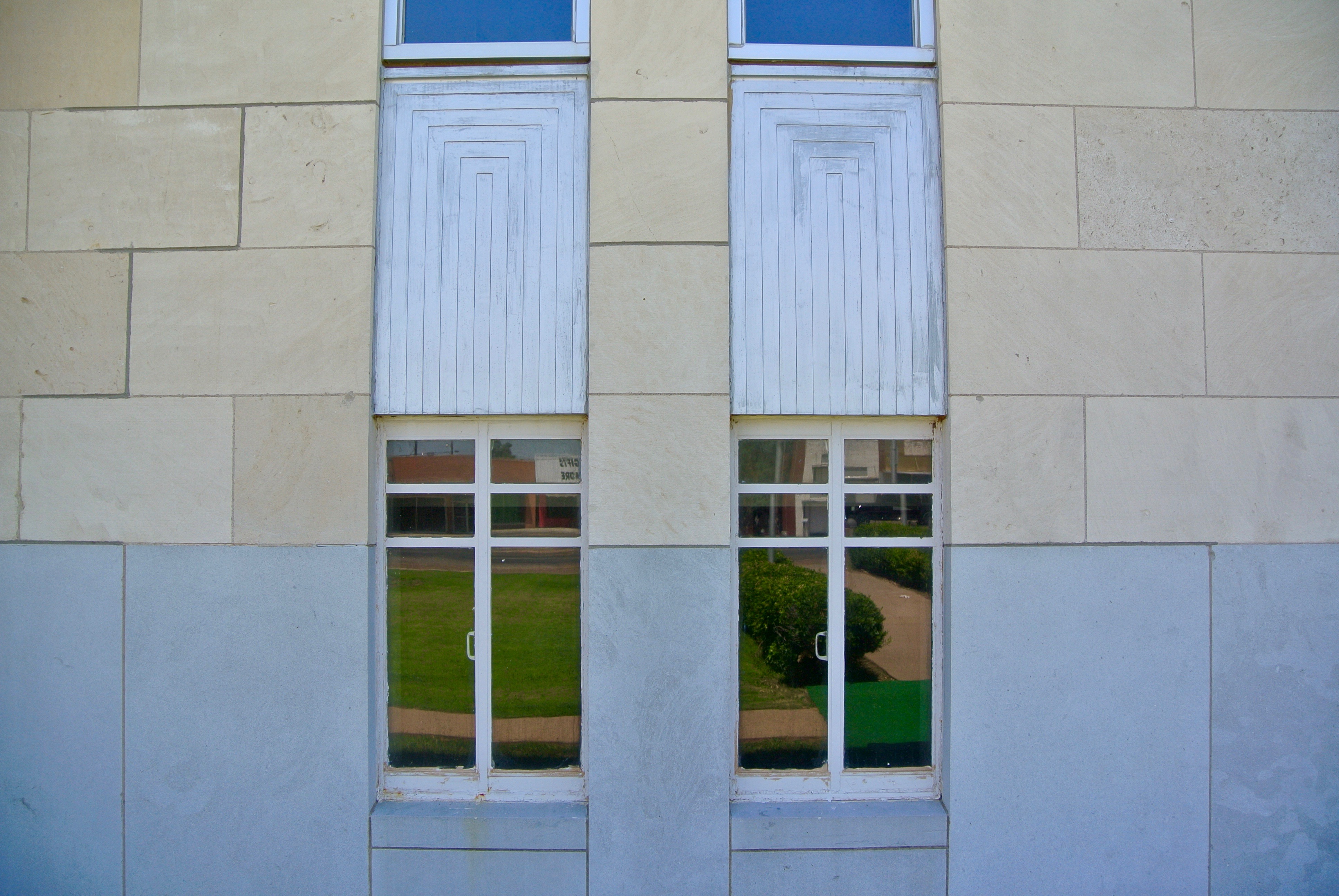 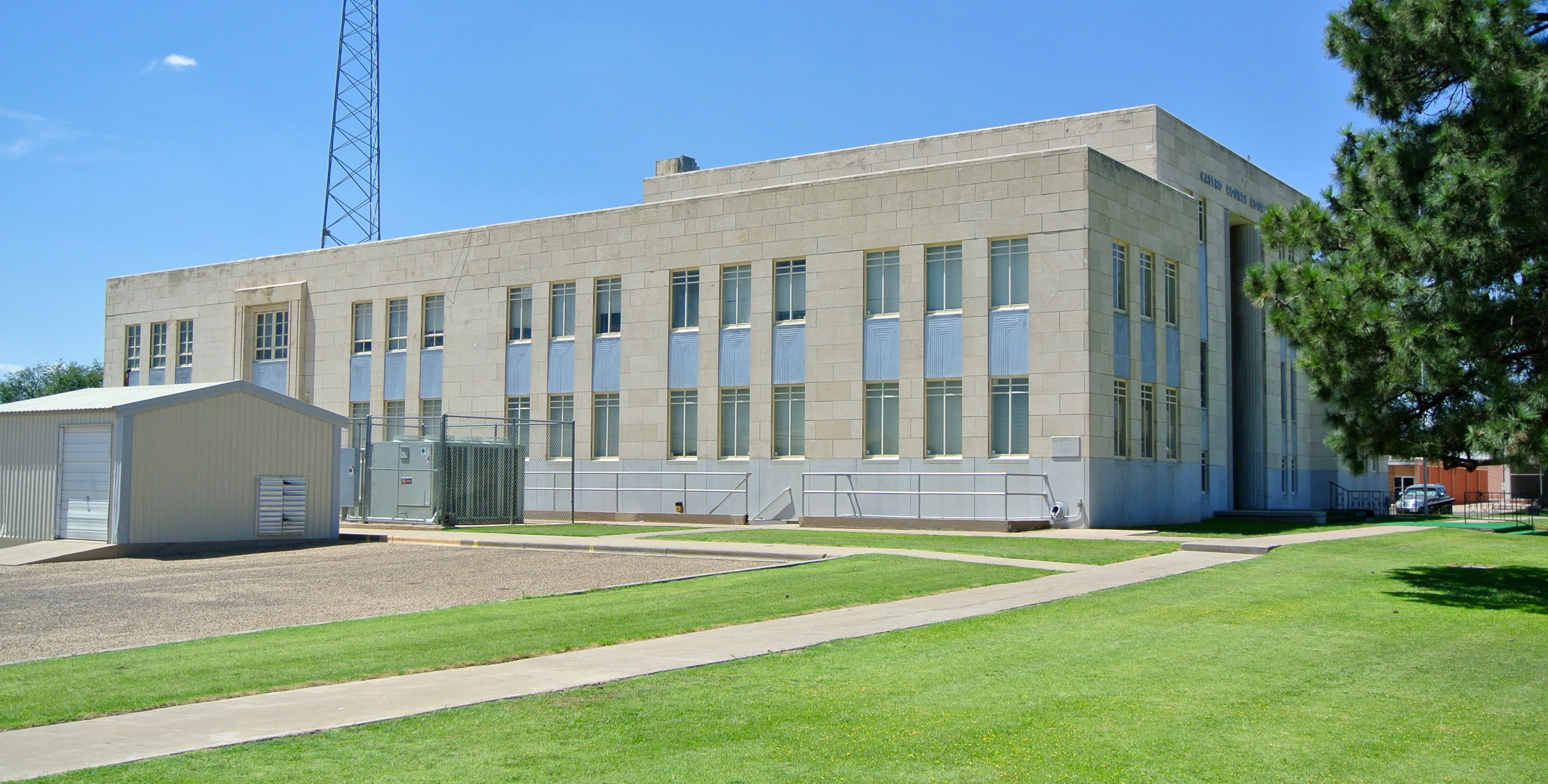 At the northeast corner 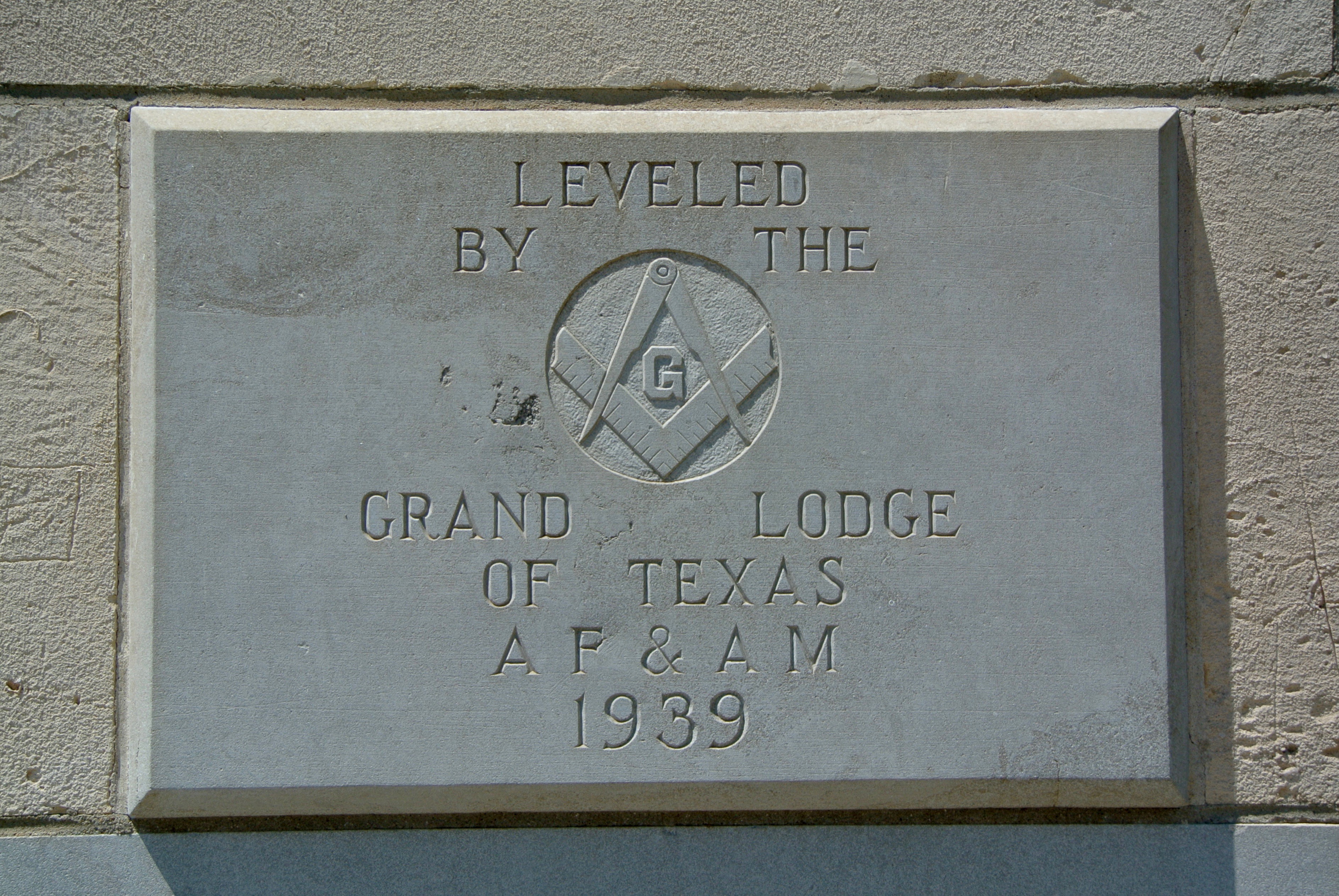 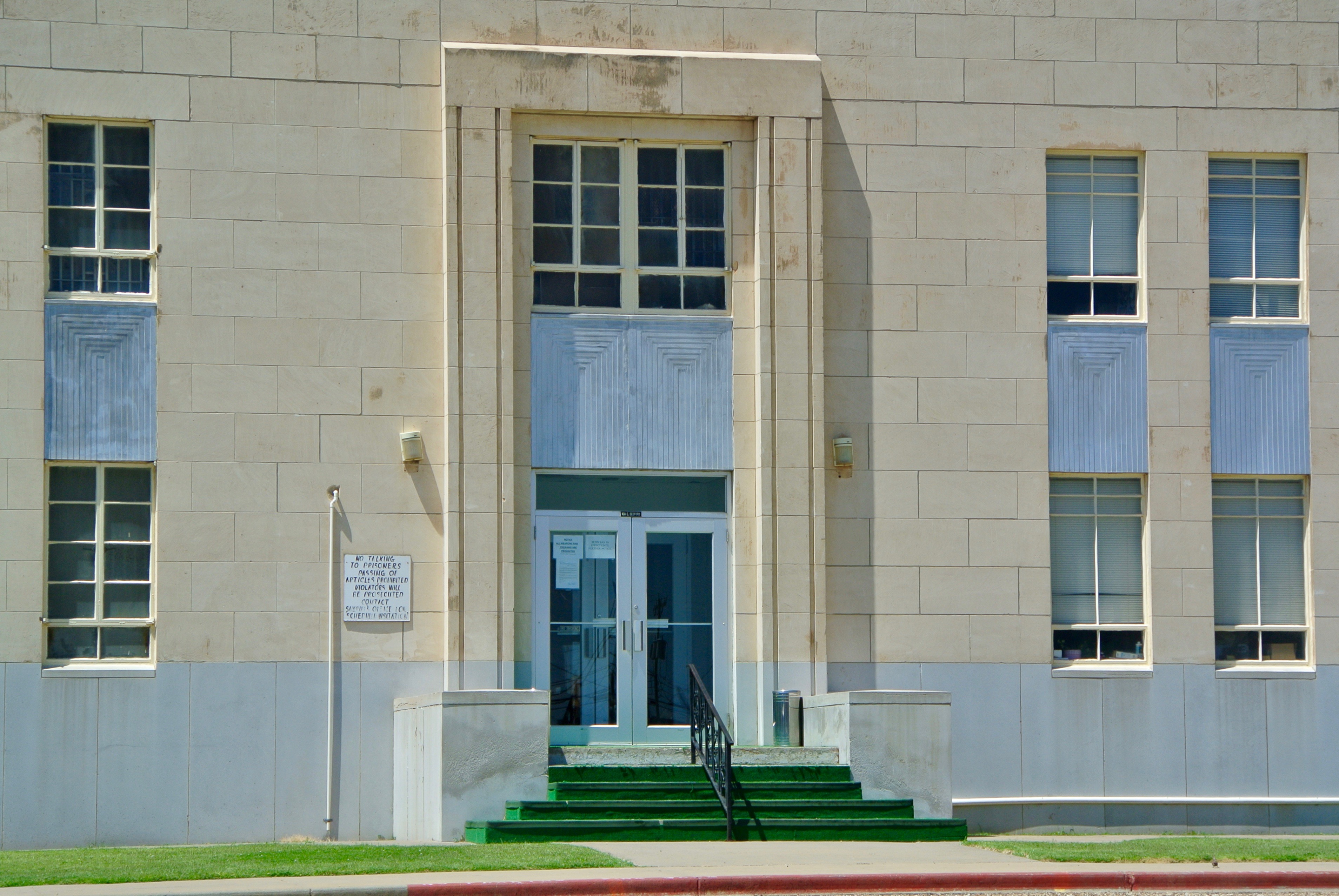 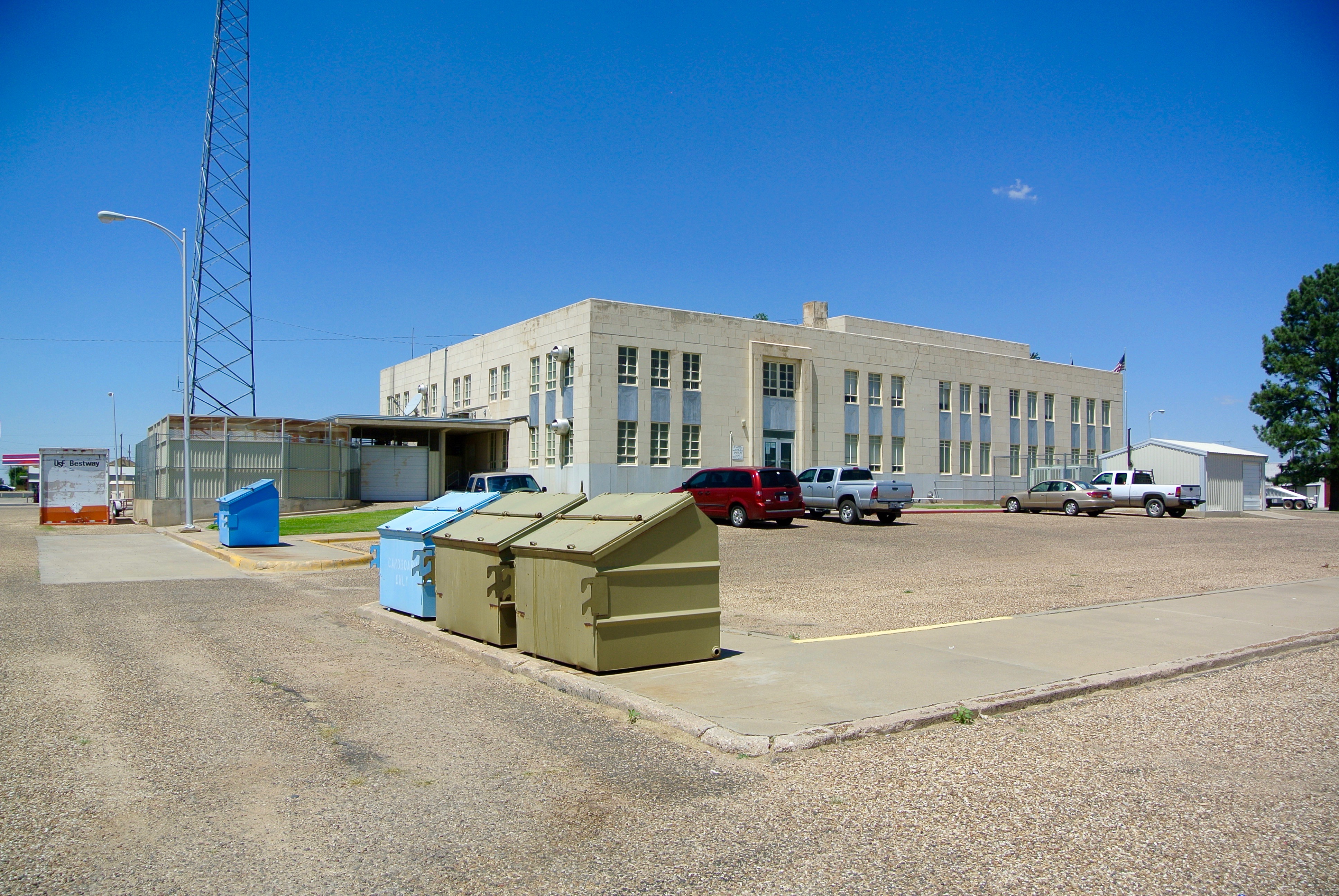 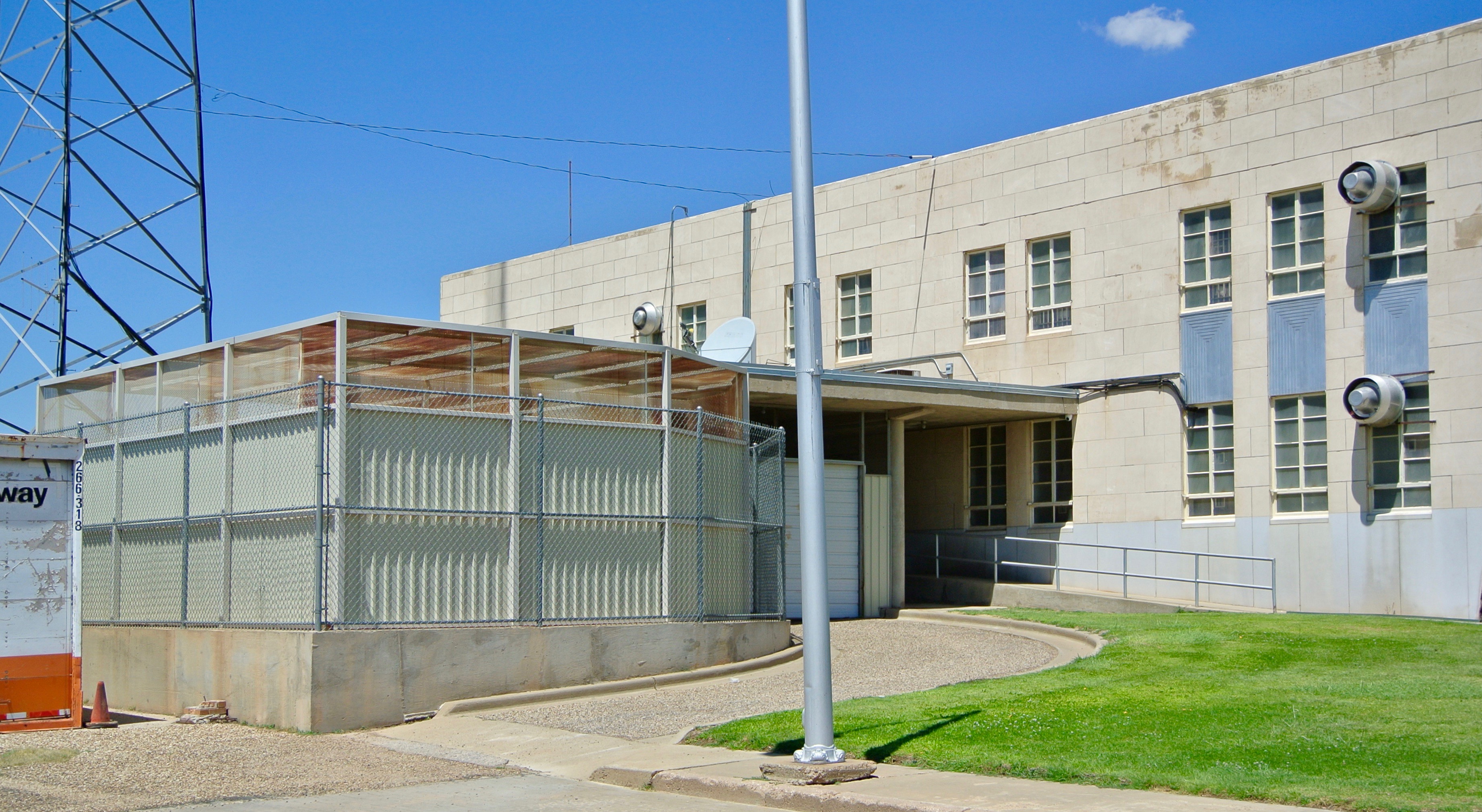 The rear entrance into the building, where the county jail is located 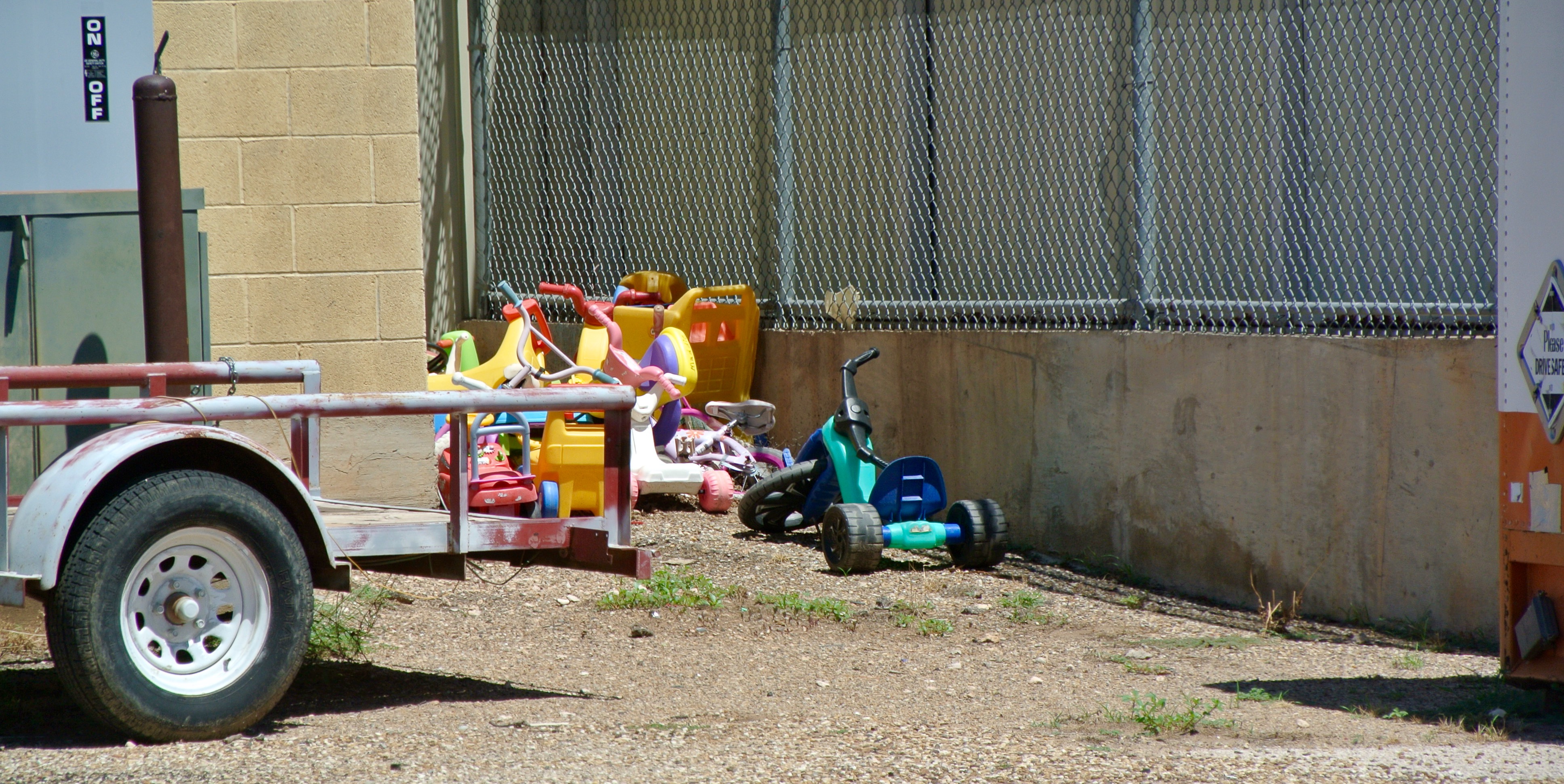 The prisoners’ rec-yard toys, I assume 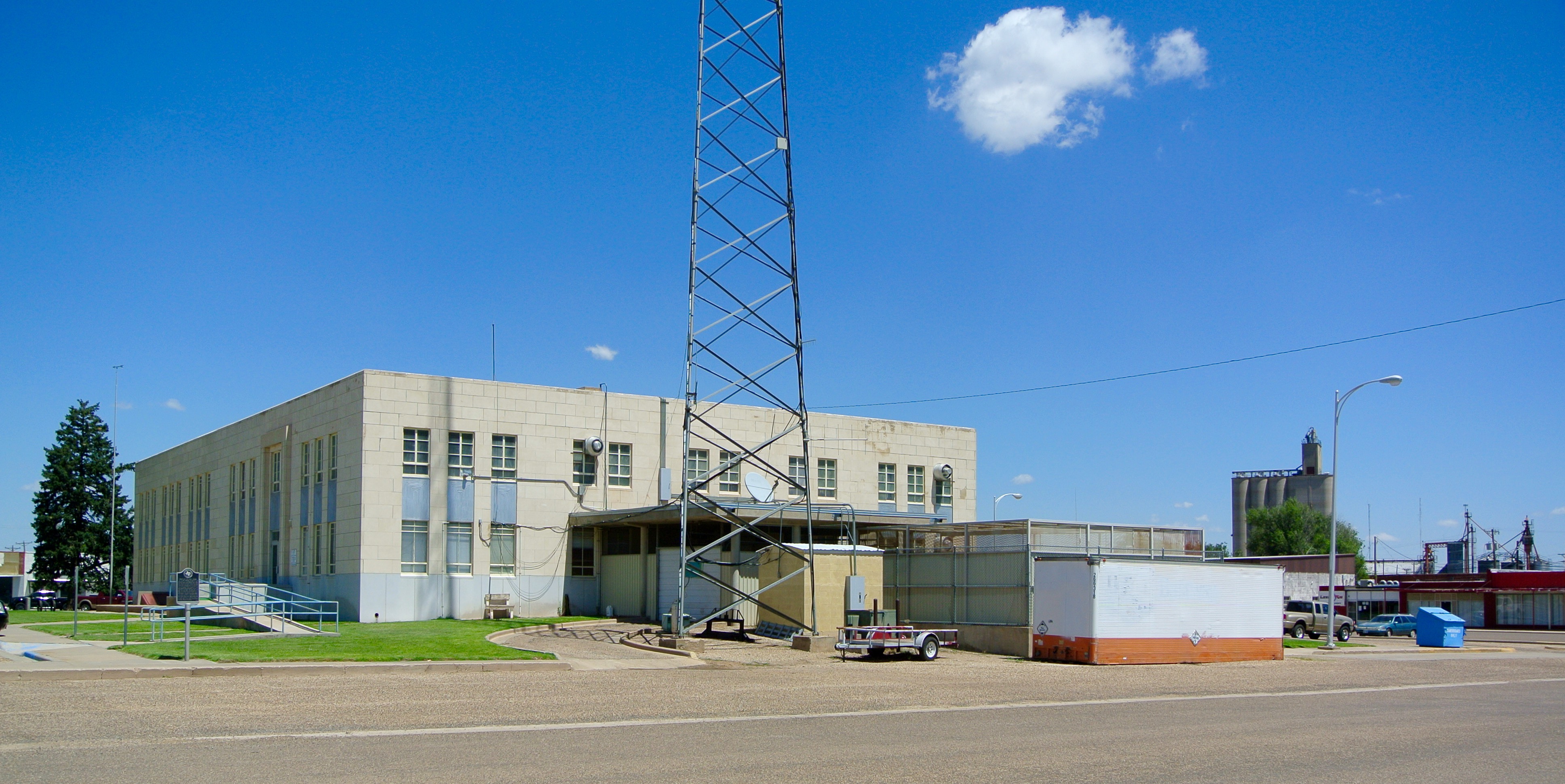 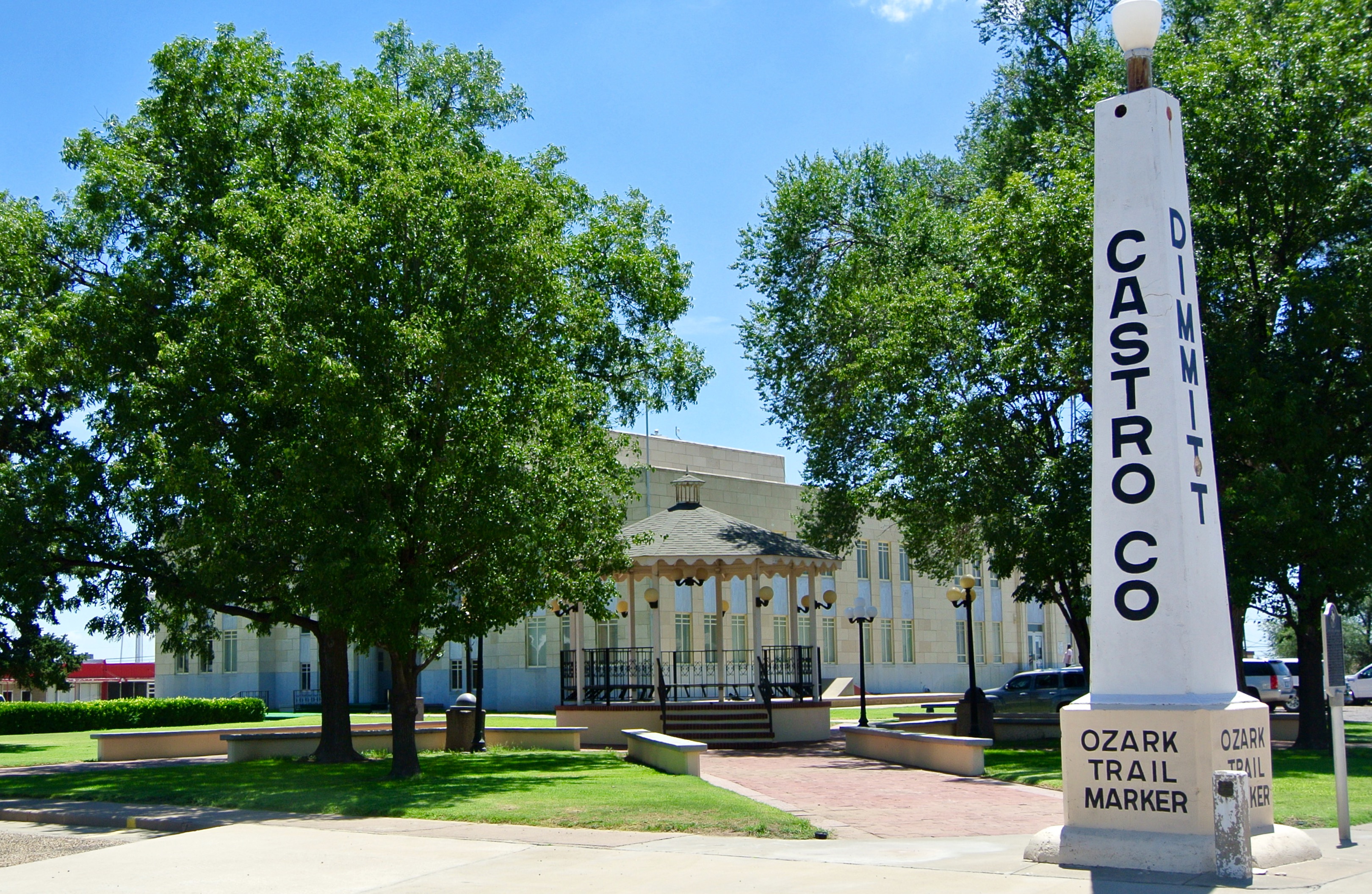 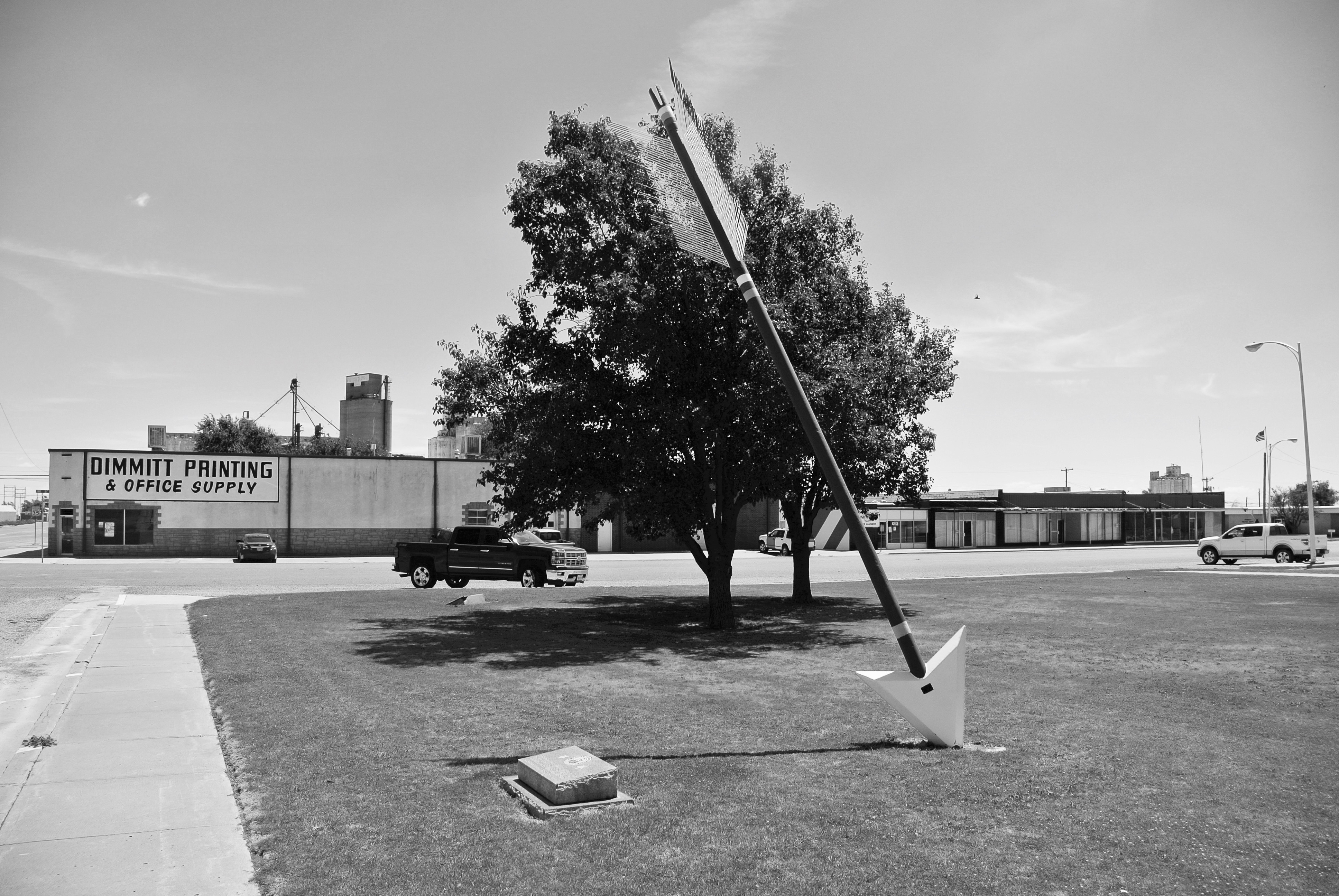 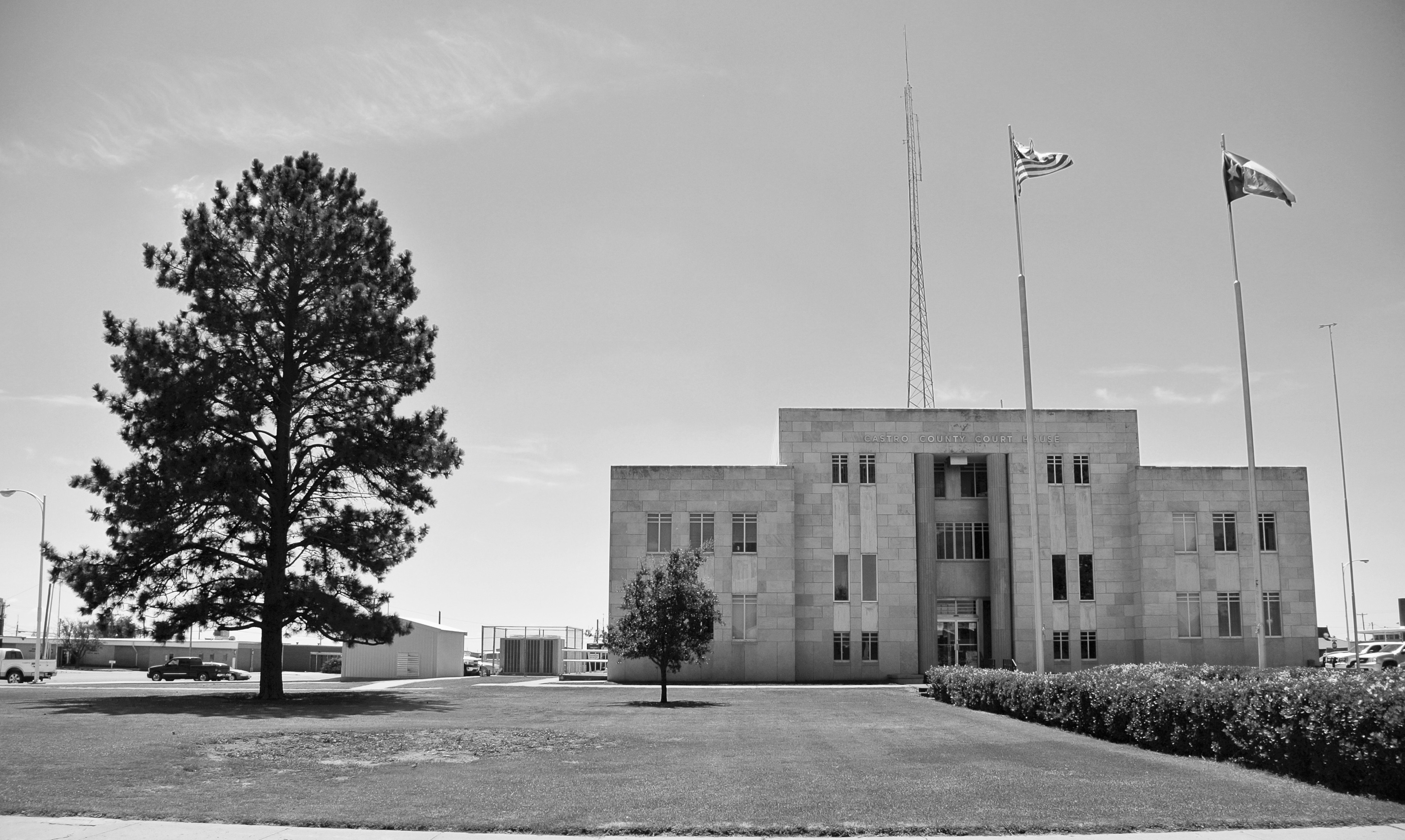 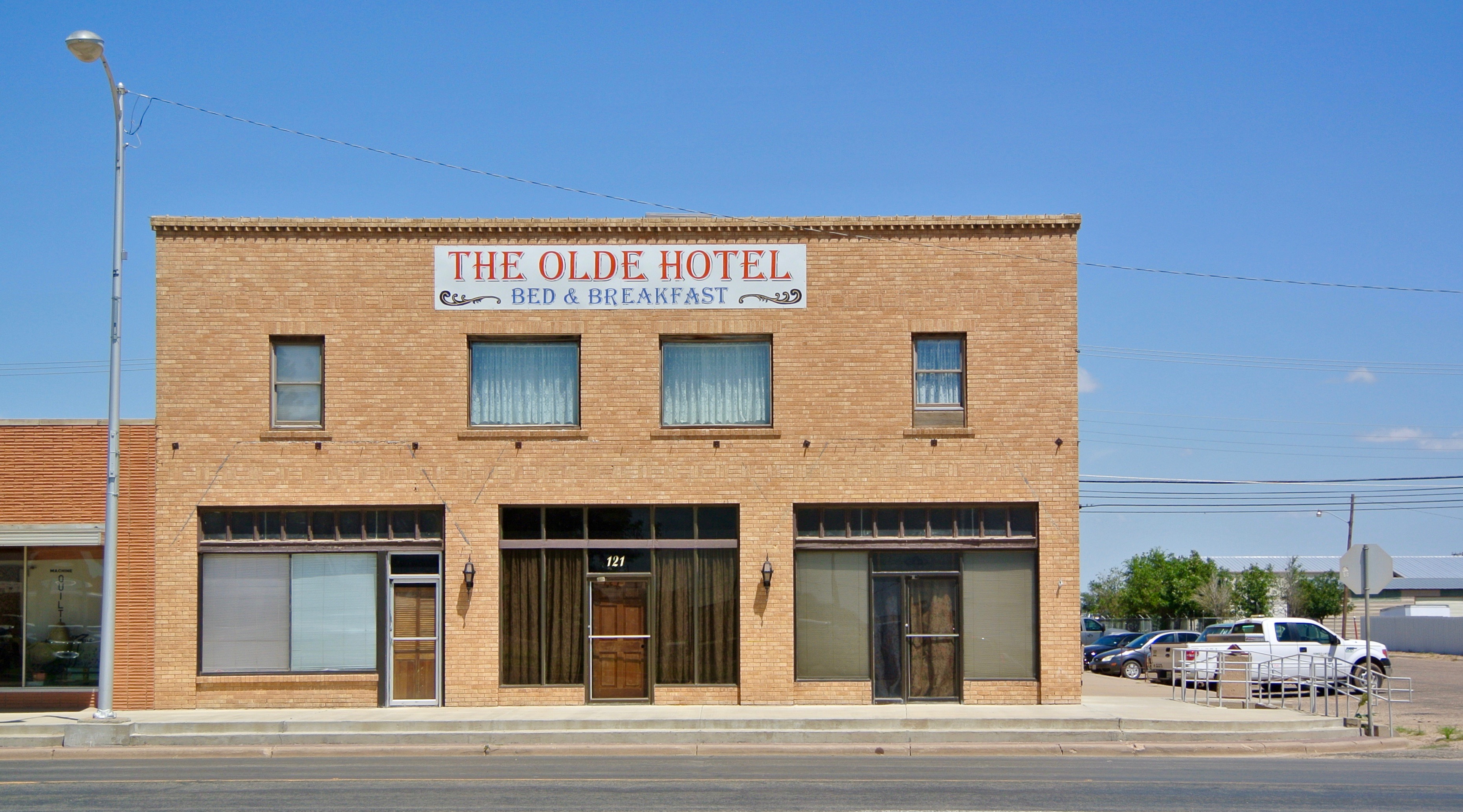 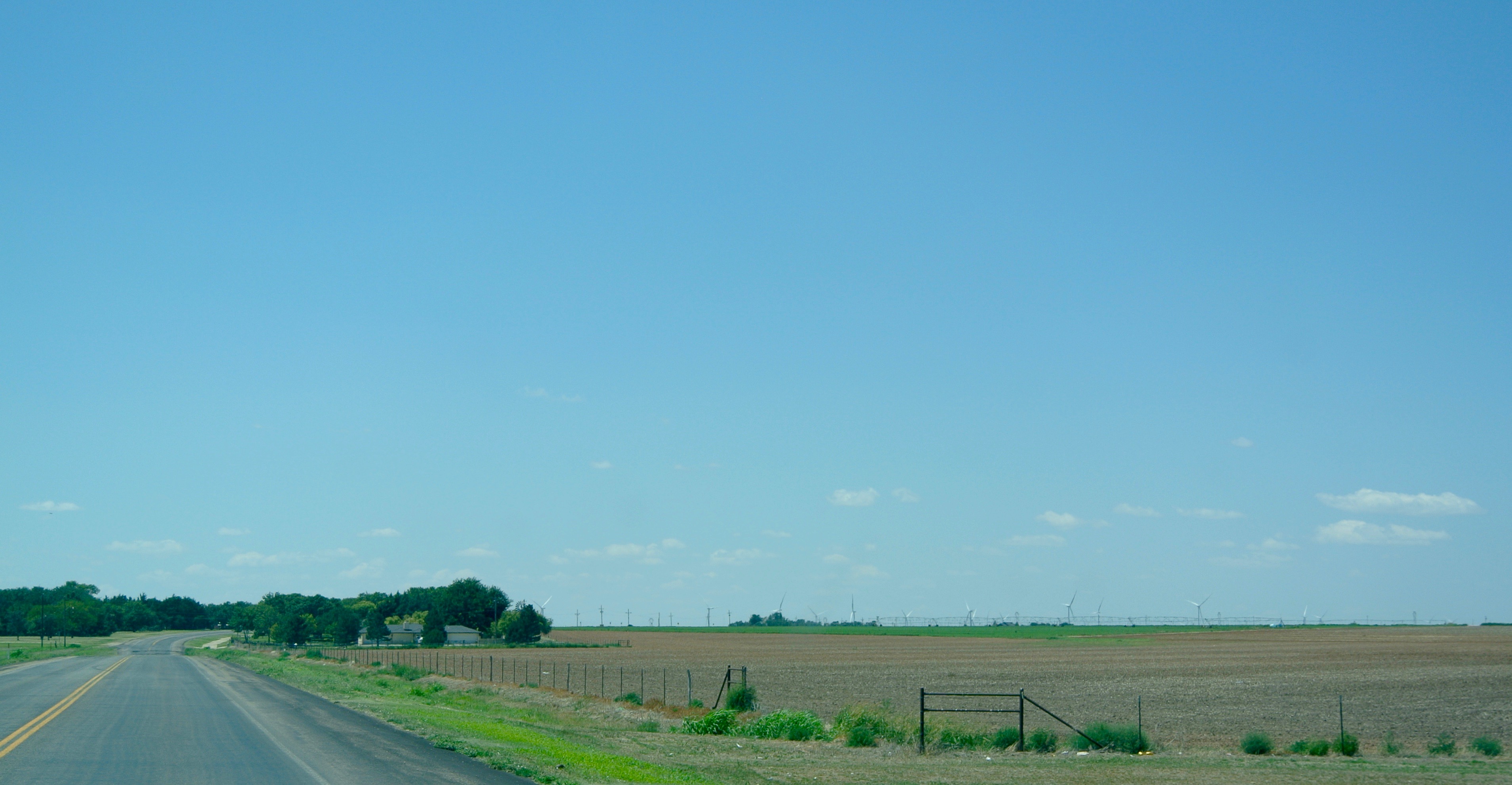 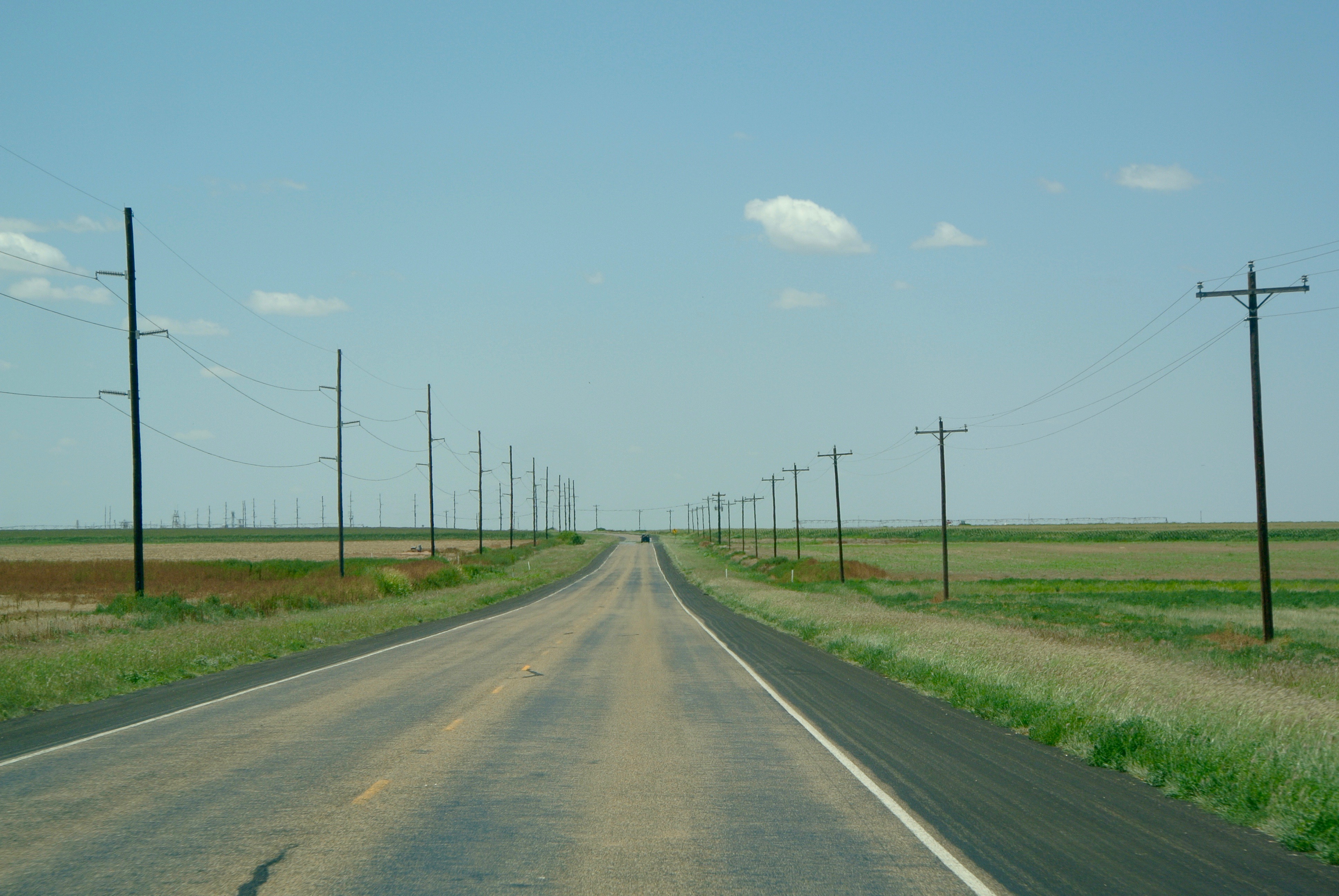