“The county is named for George C. Childress, author of the Texas Declaration of Independence. The county seat, Childress, is located 116 miles southeast of Amarillo, on the Fort Worth and Denver Railway and U.S. Highway 287.”

“The county comprises 699 square miles of rolling prairies and rough riverbottoms. Its soils are a mix, usually a sandy loam mixed with alluvial sands from the county’s many creeks and rivers. These soils support a variety of native grasses as well as cotton, wheat, and sorghum. Shin oak, mesquite, salt cedar, and hackberry grow in the bottoms. The county has a small yearly production of oil and gas, but minerals do not play a major role in the local economy.” 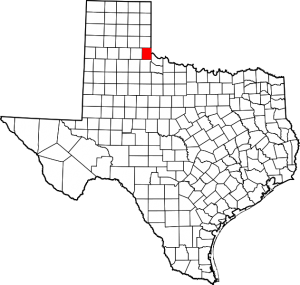 “As the Comanches retreated to reservations in Indian Territory during 1875 and 1876, buffalo hunters spread across the area. By the late 1870s the buffalo herds were exterminated and ranchers entered the local picture. The Texas legislature formed Childress County in 1876.”