“Ector County is in West Texas on the lower shelf of the Great Plains and on the northern border of the Edwards Plateau[.]“

“The county was named for Mathew D. Ector, a Confederate general and Texas jurist. It covers 907 square miles of level to rolling land with elevations that vary from 2,500 to 3,300 feet above sea level.”

“Ector County’s geology is significant since the county is a major producer of petroleum products. Oil in the Permian Basin was formed in comparatively shallow reservoirs bound by Permian Age limestone. Above the oil a large gas cap formed, which in modern times provides the energy for producing the oil underneath, making the Permian Basin nearly ideal for oil and gas production.”

“Impressive evidence of prehistoric Indian culture in the area that is now Ector County exists in the Blue Mountain pictographs, which depict various prehistoric hunting scenes. During the eighteenth and nineteenth centuries the area was within the range of Comanche hunters, but was not particularly attractive to them because of the region’s limited water resources.”

“Ector County was marked off in 1887 from land previously assigned to Tom Green County, and was attached to Midland, Crane, and Upton counties for judicial purposes. As early as 1881 promoters of the Texas and Pacific Railway encouraged immigration by offering to haul farm machinery and household goods for prospective settlers at no charge; they ignored the limited rainfall and predicted a splendid agricultural potential for the area.”

“Pointing to the county’s supposed resemblance to the steppes of Russia, a railroad official named the first settlement in the county Odessa; in 1882 the town became one of nine stopping places on the railroad’s route through West Texas. In 1886 the Odessa Land and Townsite Company was formed in Zanesville, Ohio, to sell farmland in Ector County; the company’s exaggerated promises and bi-monthly excursion trains failed to attract enough buyers, however, and by 1889 the company was bankrupt. In fact the region was most suitable for ranching, and for many years Ector County was known mainly for its fine Hereford cattle.” 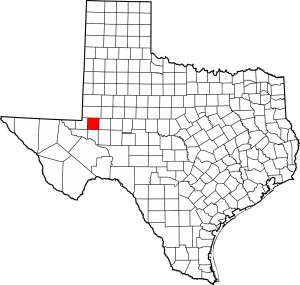 “But, as pioneer J. J. Amburgery later pointed out, the area did present one decided advantage to prospective farmers: “Land was pretty cheap out there. I bought seven sections of school land for $1 an acre.” During the late 1880s and in the 1890s settlers began to trickle in. In 1890 the census enumerated 224 residents, and in 1891 Ector County was formally organized, with Odessa, the largest town, designated as the county seat. In the early 1890s Methodists established a small school, Odessa College, but it burned down in 1892. By 1900, there were twenty-five farms and ranches in the county, and the population had grown to 381.”

“Between 1900 and 1930, despite periodic droughts, farmers continued to move into the county in small numbers. A few farmers experimented with cotton production during this period. In 1908 about 800 bales of cotton were ginned in the county. In 1910 cotton was planted on 222 acres in the county; in 1920, when only about 80 acres in the entire county was devoted to cereal crops, cotton culture occupied 363 acres; in 1930 cotton was produced on 1,326 acres of the 2,580 acres of cropland harvested. Local farmers also planted hundreds of fruit trees; by 1910, for example, 588 peach trees were growing in the county.”

“The great oil strike made in 1926 on W. E. Connell‘s ranch, however, marked the beginning of a tremendous boom that fundamentally changed the character of the county’s economy and society. After the Penn field was opened in 1929 and the Cowden field in 1930, Odessa became the shipping and oilfield supply center for the county’s burgeoning petroleum boom. County lands produced almost 12,330,000 barrels of oil in 1938, and by the mid-1940s Ector County had over 2,000 producing wells, to rank as one of the leading oil-producing counties in the state.”

“In the mid-1960s the nation’s largest petrochemical complex was established near Odessa.”

“Ector County offers several cultural amenities to its inhabitants, including a replica of Shakespeare’s Globe Theater where a seasonal festival is held, the Odessa College Museum, and the University of Texas of the Permian Basin. Residents and tourists in the county can also view the second largest crater in the United States, formed in some distant time when a meteor fell eight miles southwest of Odessa.” 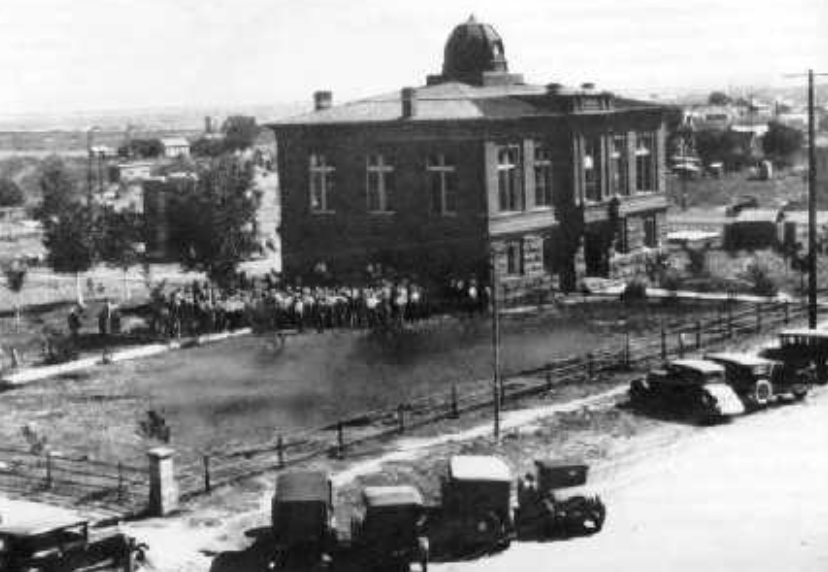 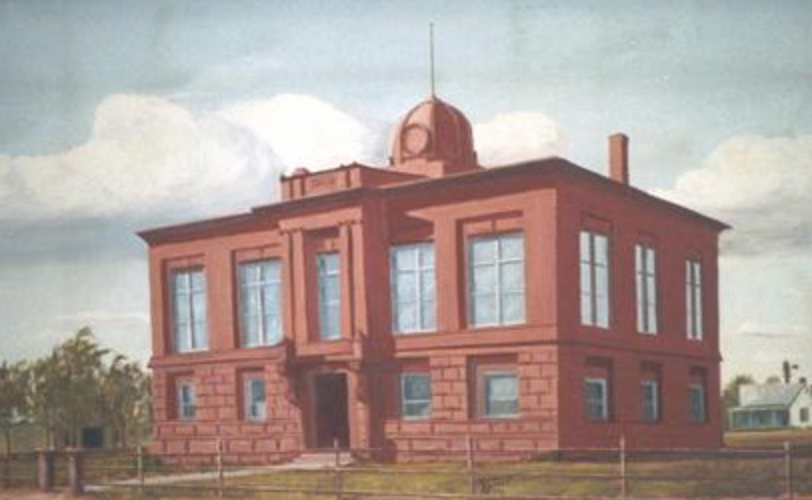 This building succeeded a single ancestor: a wooden framed, town sanitarium that had been repurposed for county use in 1891. The 1904 version was built just to its east. Four hundred people lived in Odessa at the time this building was used, and there wasn’t much hope for expansion. It was only after the Odessa oil boom of 1926 that modernizations were considered by county officials and more space was sought. This building was torn down by 1938.

The Texas Historical Commission describes it as follows:

“Two-story rectangular, red stone structure with a rusticated aslar base. Center entry bays accented by pilasters, on each side project slightly forward from the main mass of the building. A standing seam, metal, hipped roof witha shallow pitch is capped by a small domed cupola. The first floor has entries on each facade. The double height courtroom was treated as a piano-nobile, occupying the entire second floor. The courthouse shared the square with a small masonry jail building.” 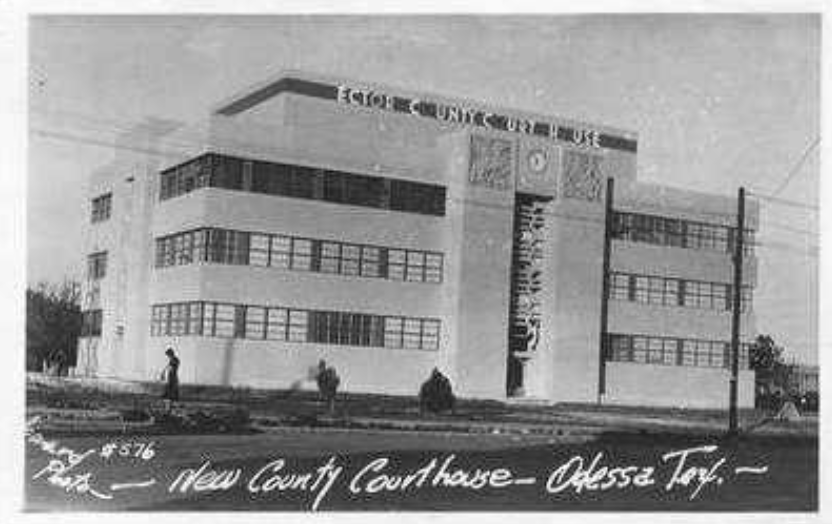 To meet the rising demand of more required space for more county business as the population exploded following the Permian Basin Oil boom, this three-story, concrete building was developed. Elmer G. Withers, typically known for his handsome, Classical Revival courthouses throughout the land, was the principal architect involved here. He employed what is listed as the ‘International Style’, a design plan I’m not familiar with anywhere else.

Steel-construction ribbon windows and long, vertical entryways helped to make this design complete. The courthouse encompassed forty thousand square feet, about a third of which was used to house county jail facilities on the top floor.

Between 1963 and 1964, the remodel to beat all other remodels occurred. This courthouse underwent severe changes, which included covering the Internationally-designed façades with concrete sun screen panels and expanding the building in size more than two-fold. What stands today looks like an entirely different building.

When the final product was complete, Governor John Connally traveled from Austin to dedicate it. That was on April 12, 1964. 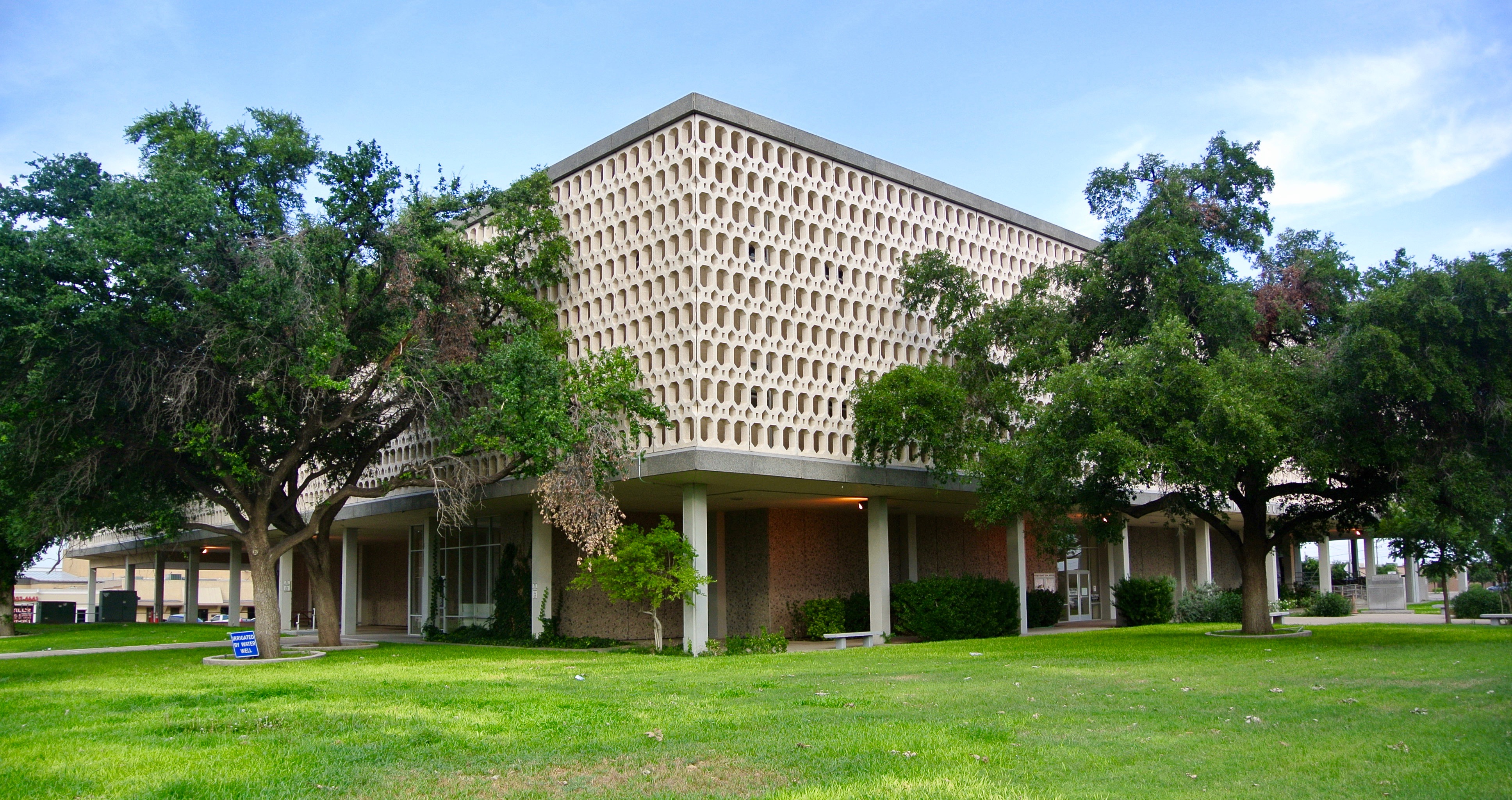 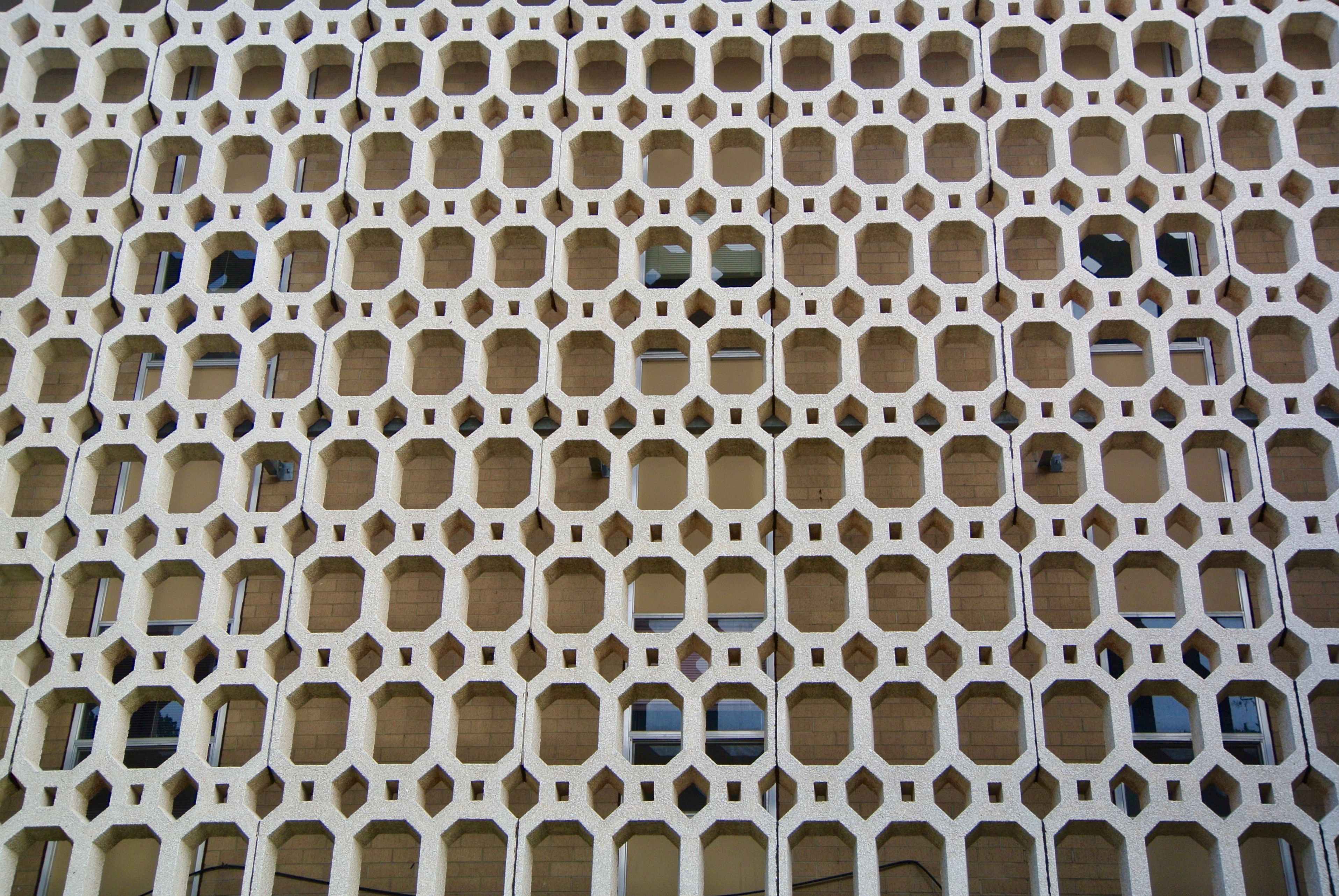 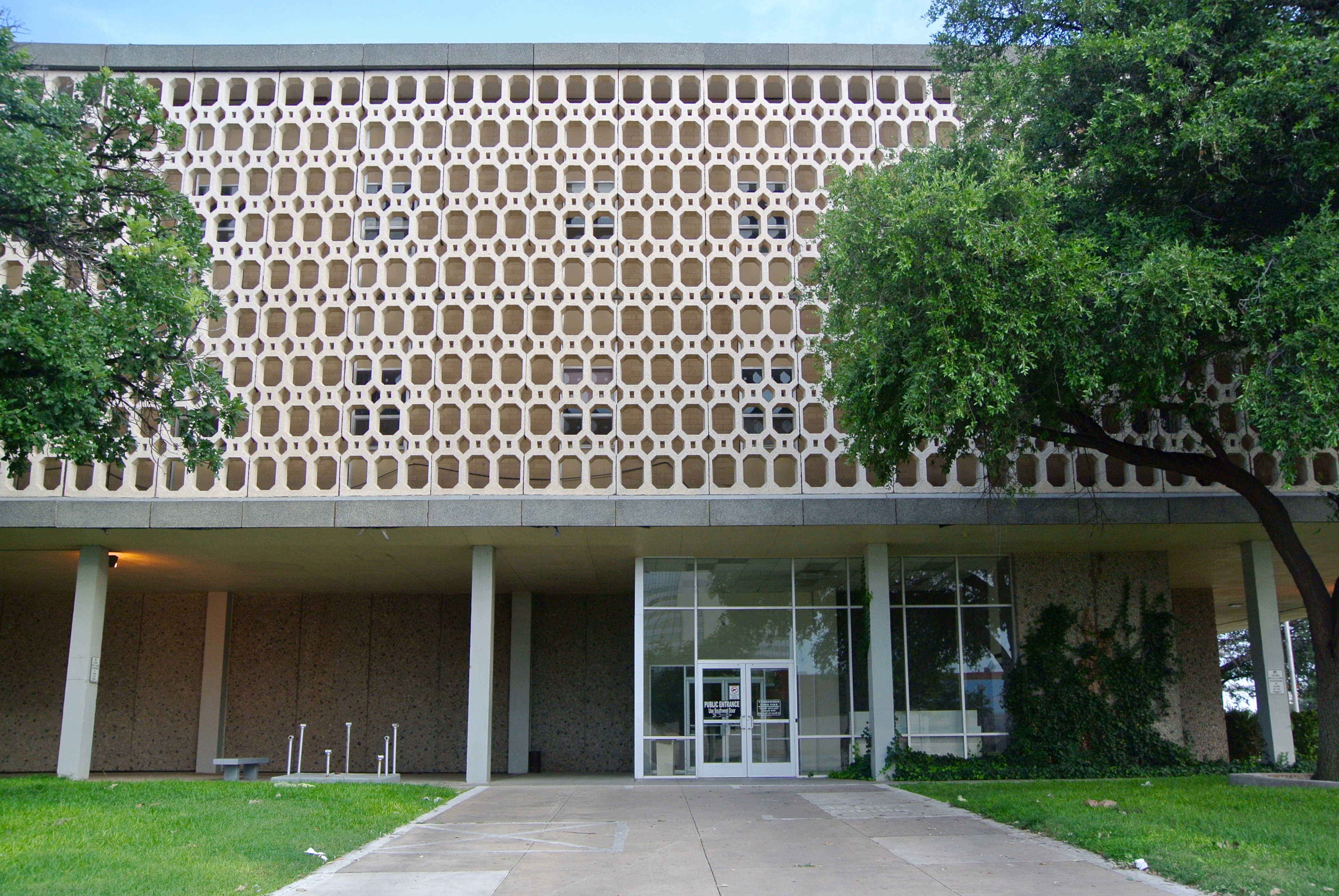 These are the northwest doors; they face 4th Street. Patrons are, however, asked to use the southwest entrance. 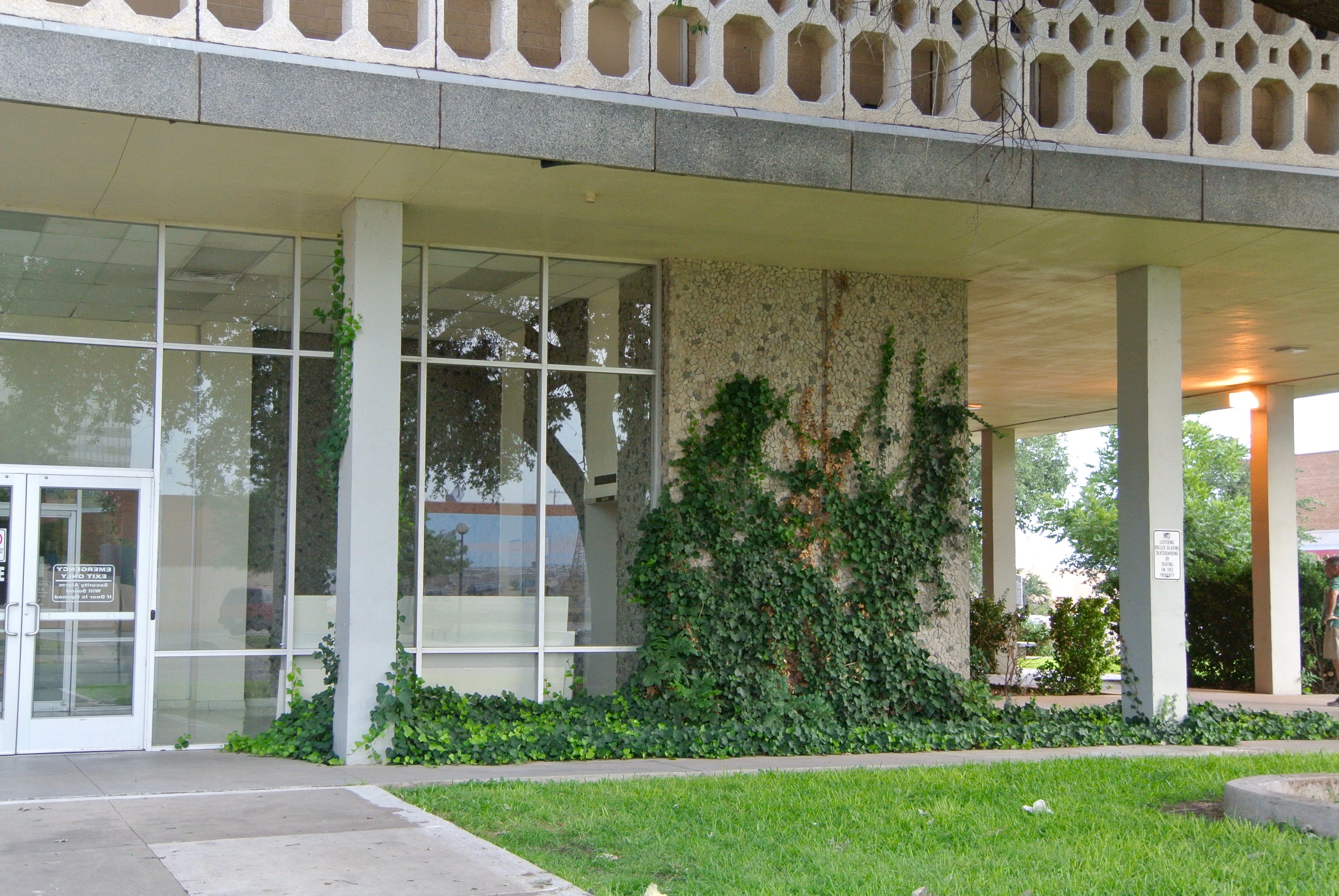 The view of 4th Street from this façade

Just beyond the courthouse lawn is an impressive longhorn statue. 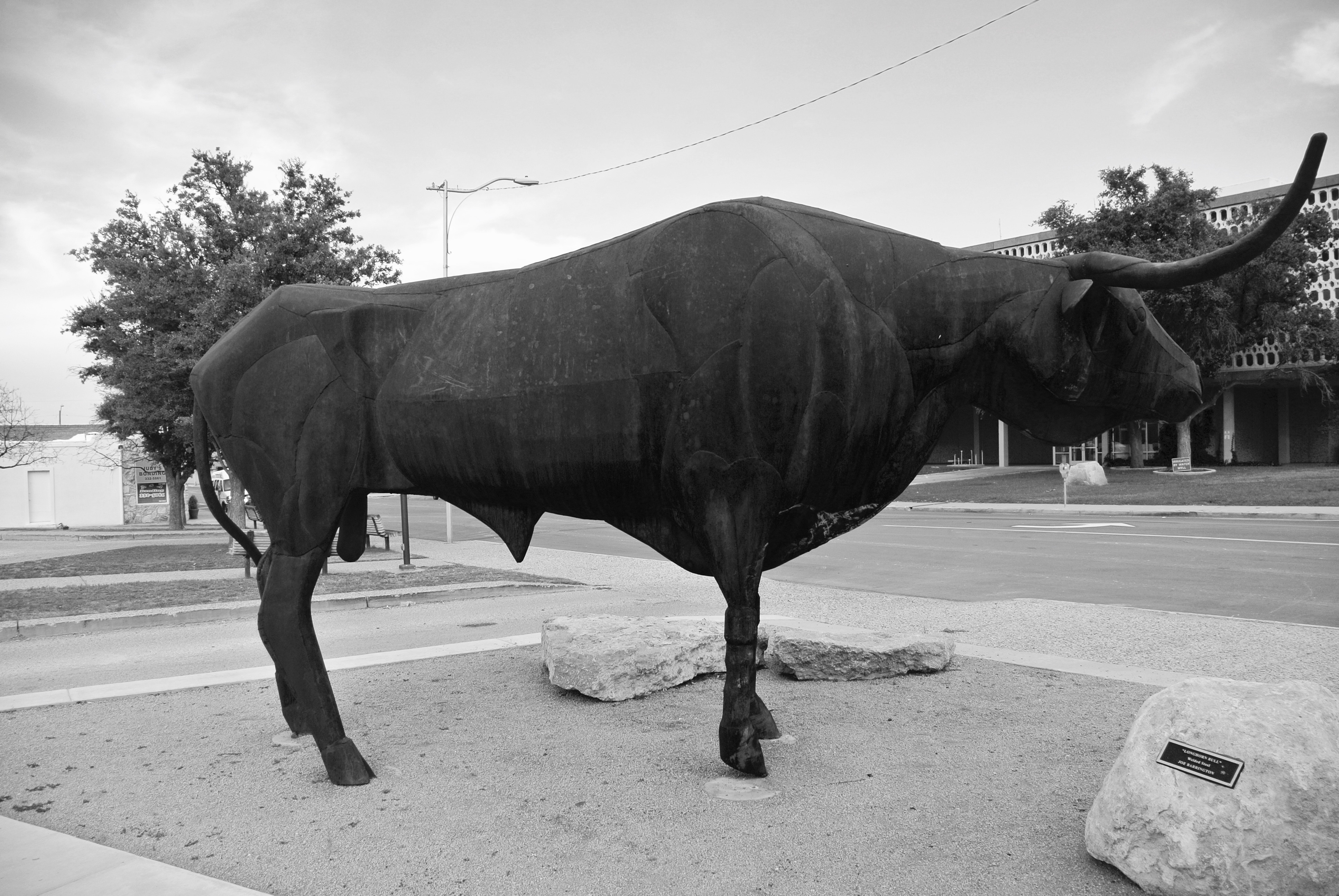 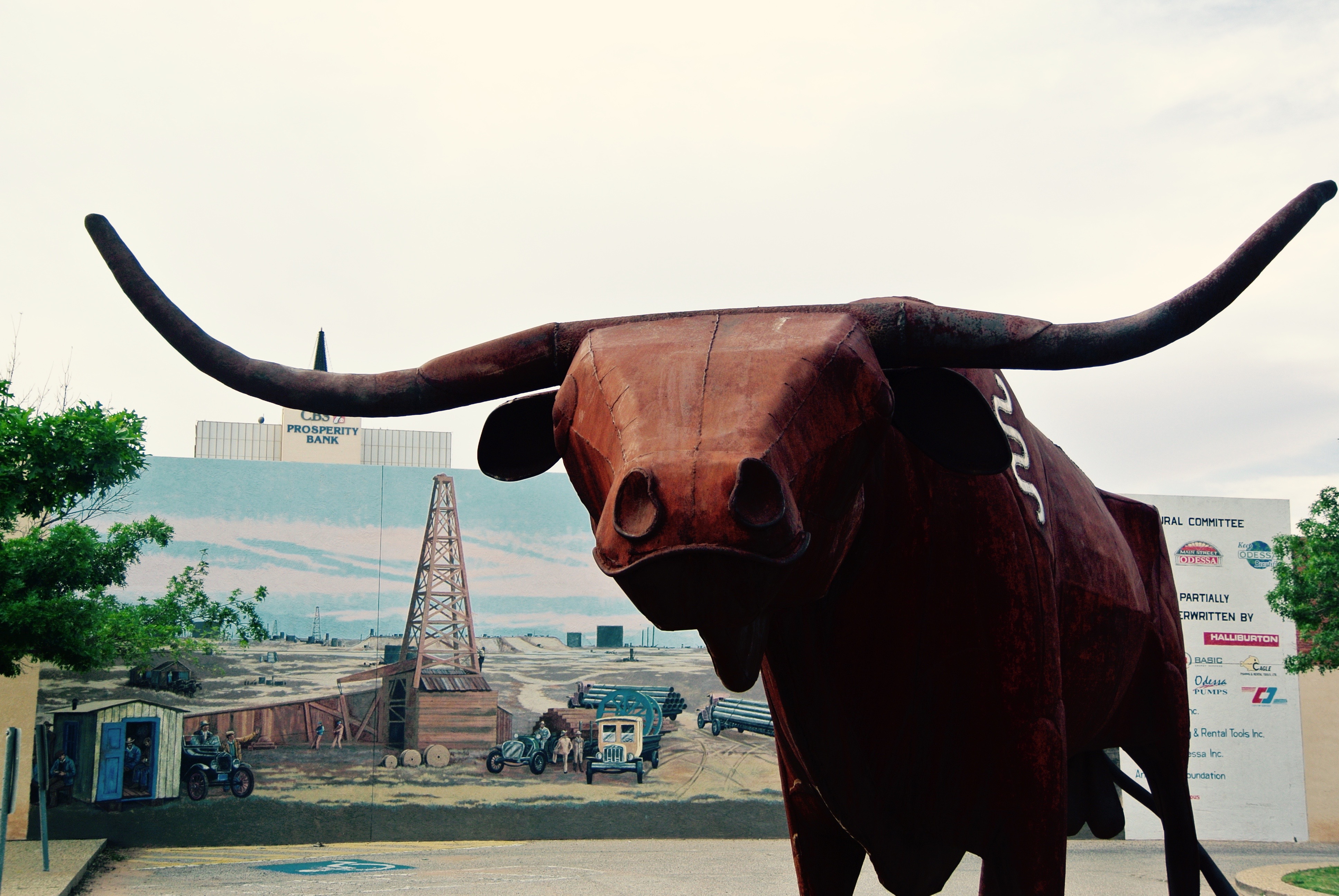 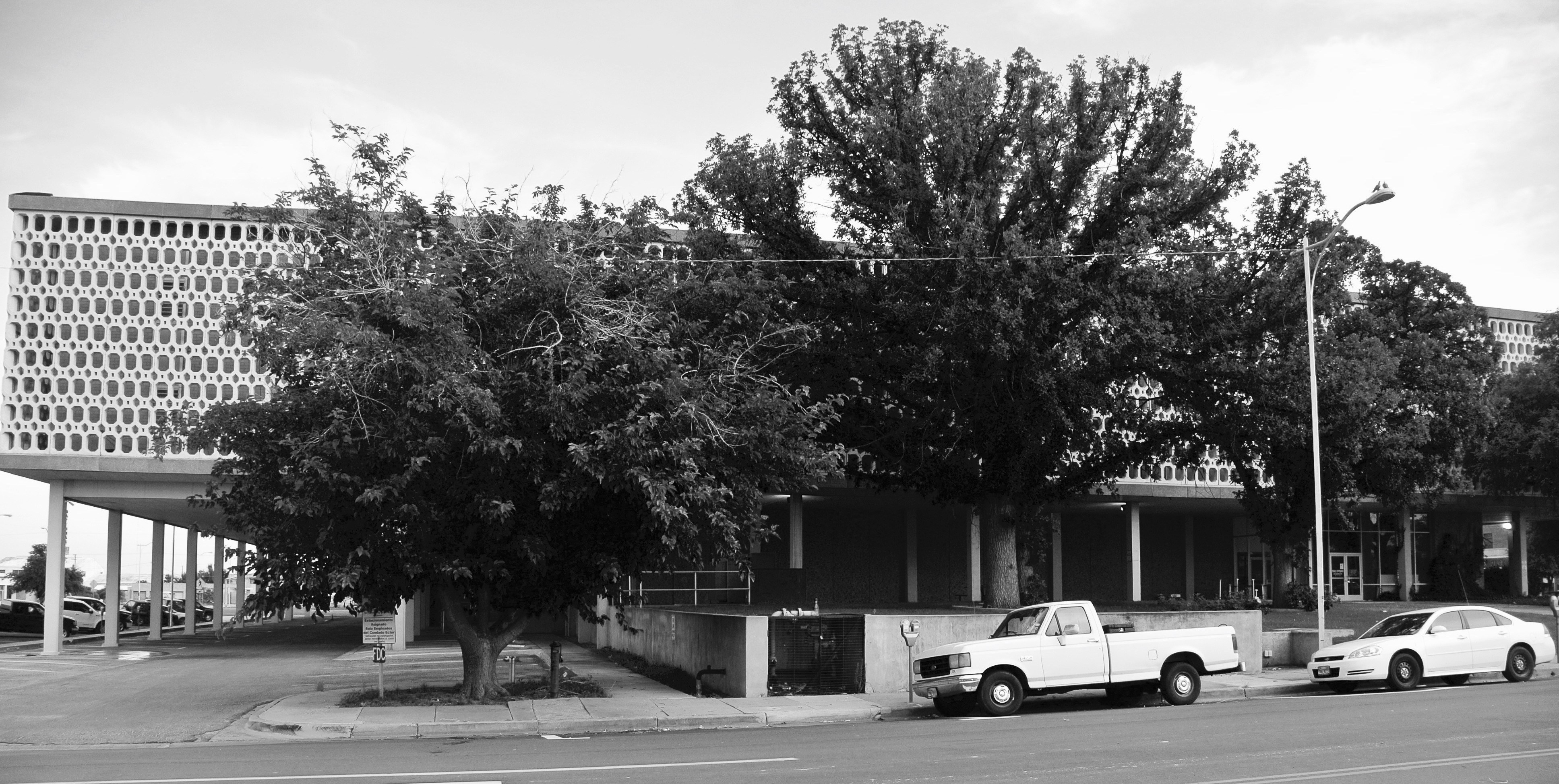 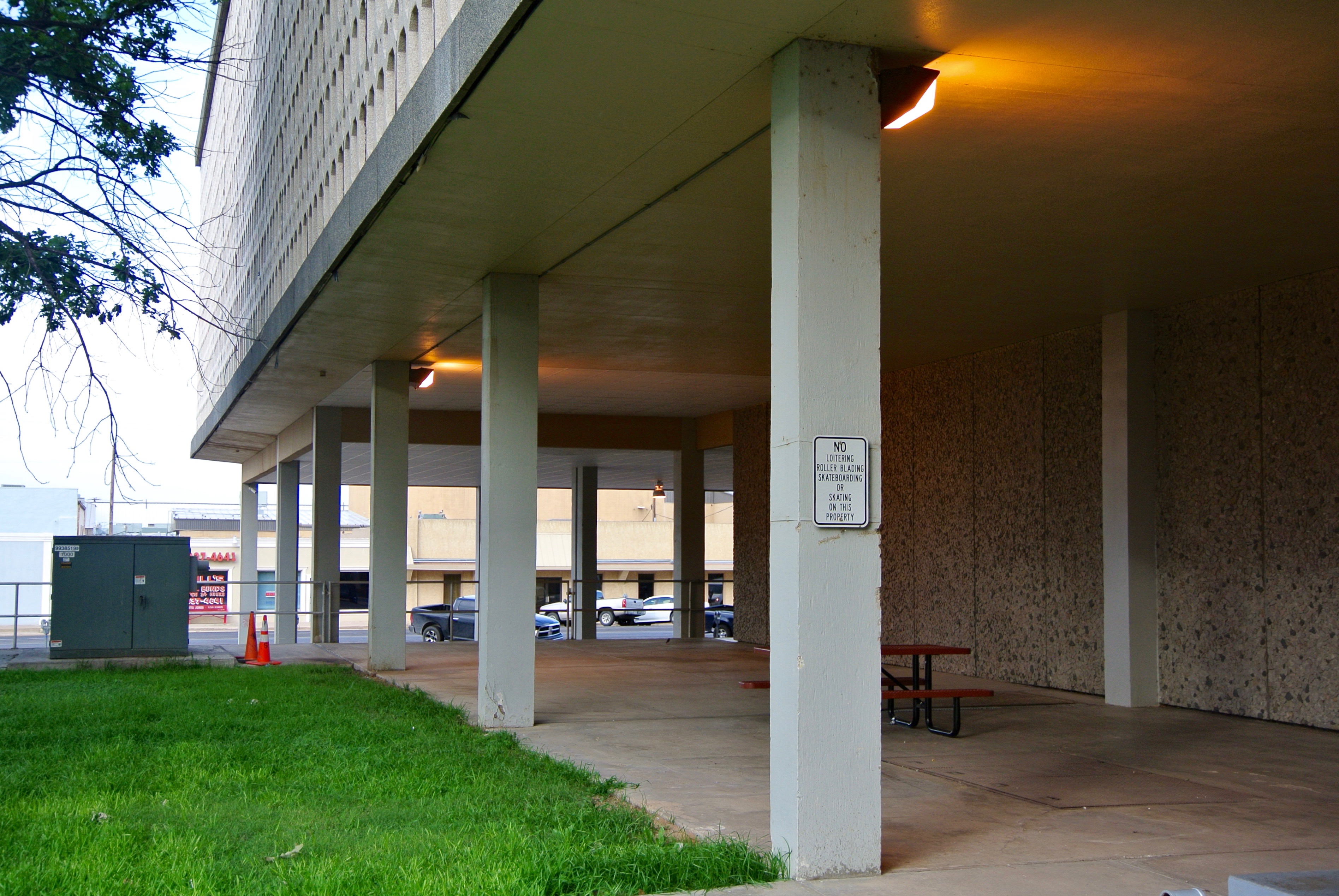 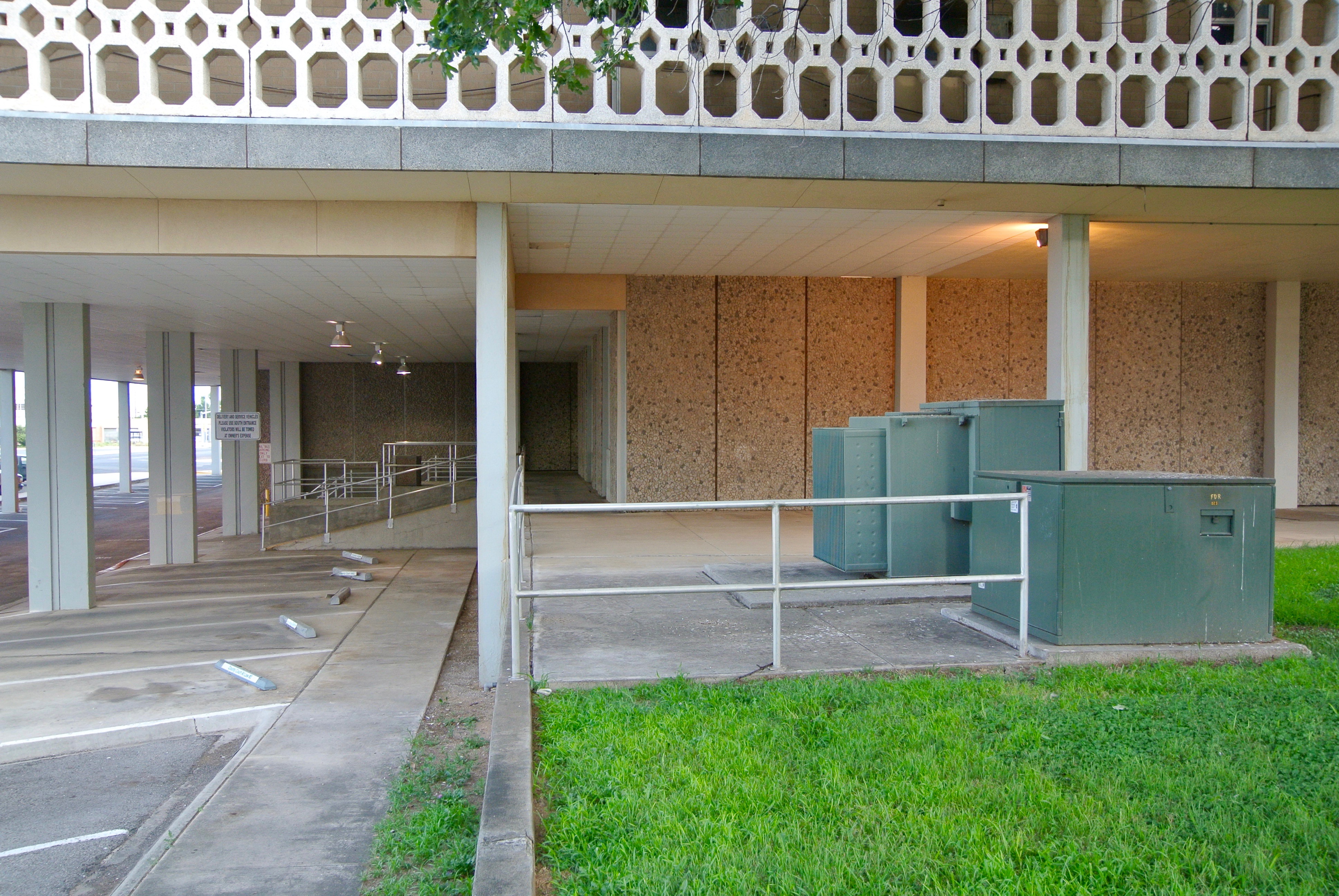 Additional parking is located literally beneath the courthouse and around the eastern side. 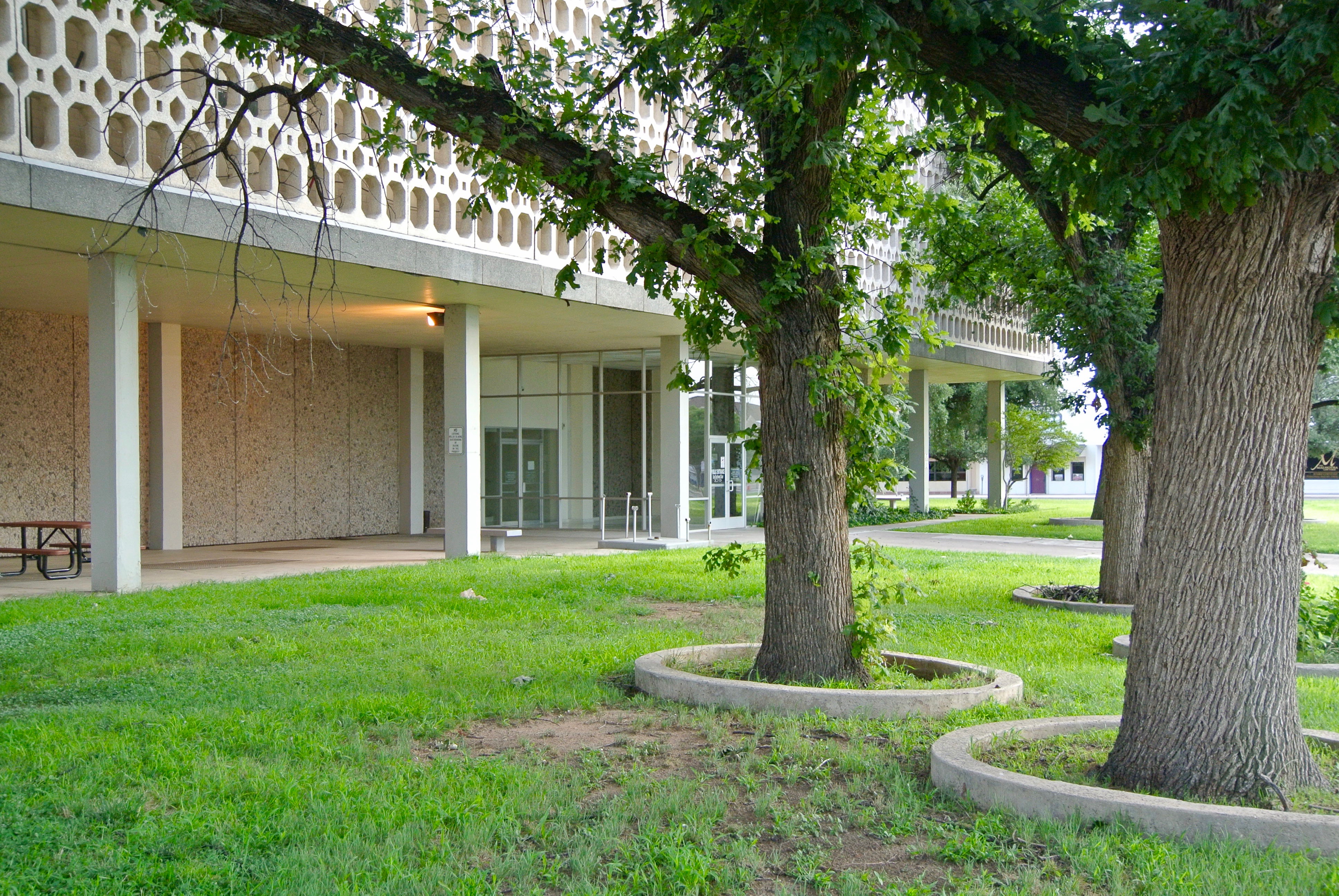 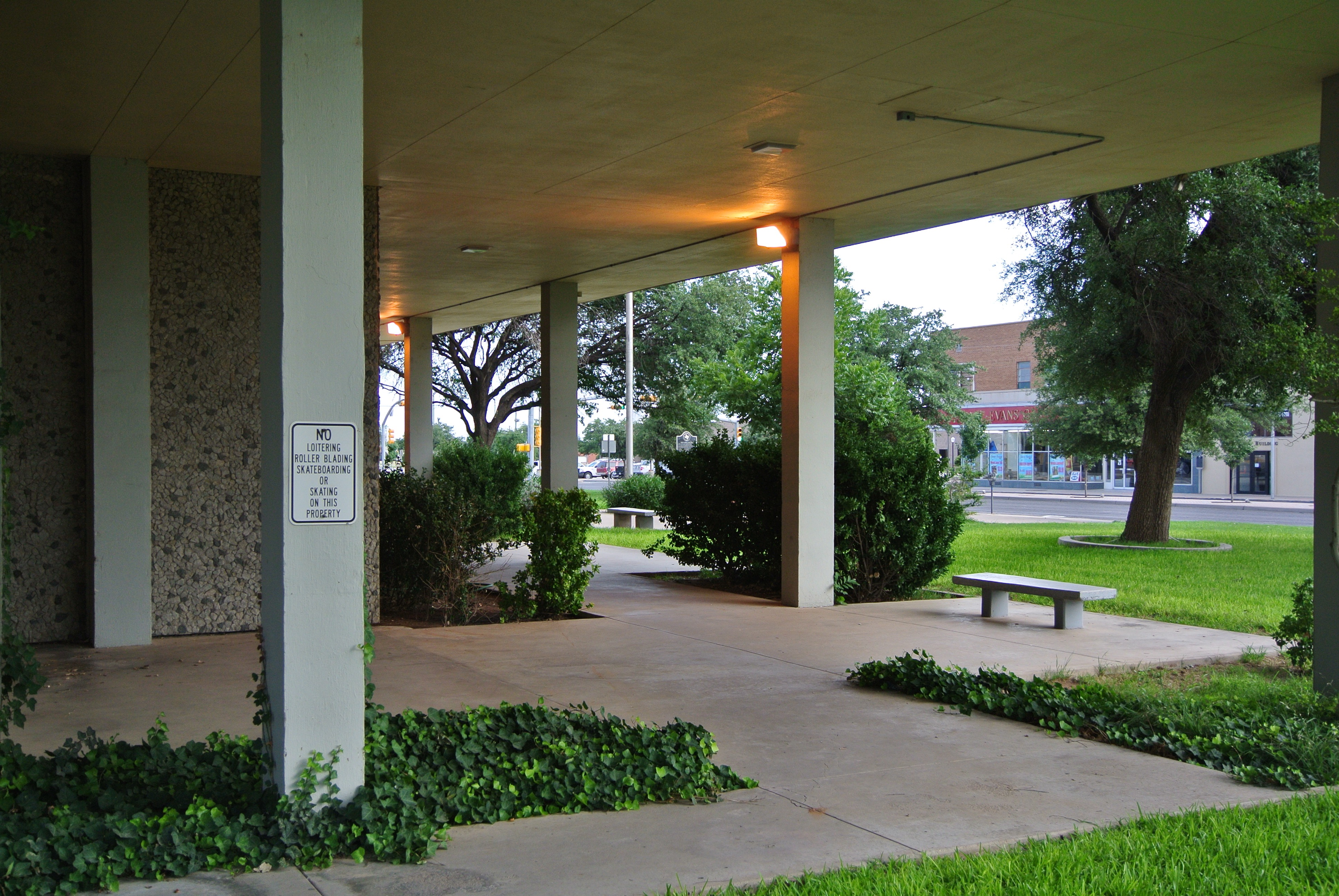 This is the northwest corner. 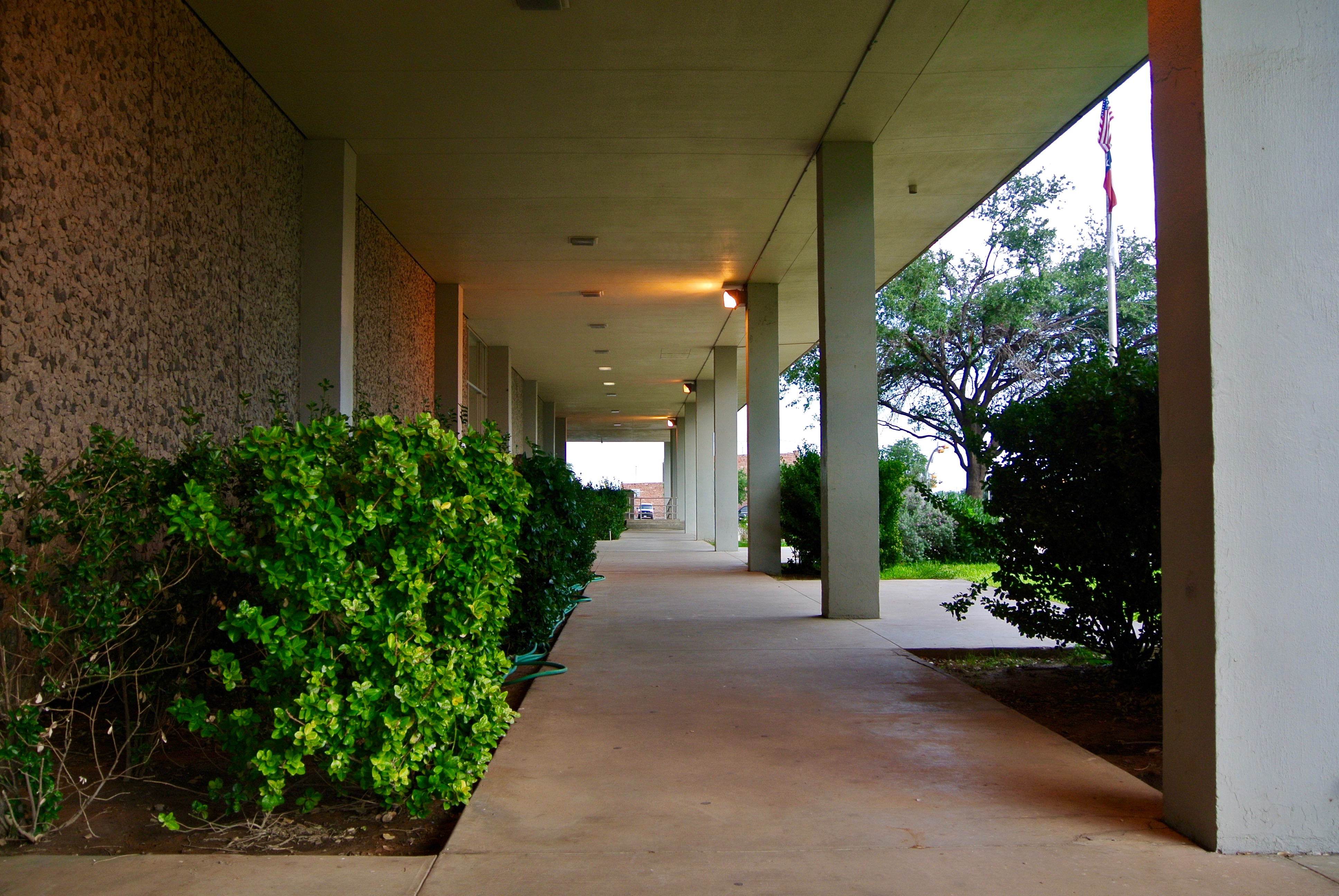 The western doors (still, patrons are asked to use another entrance) 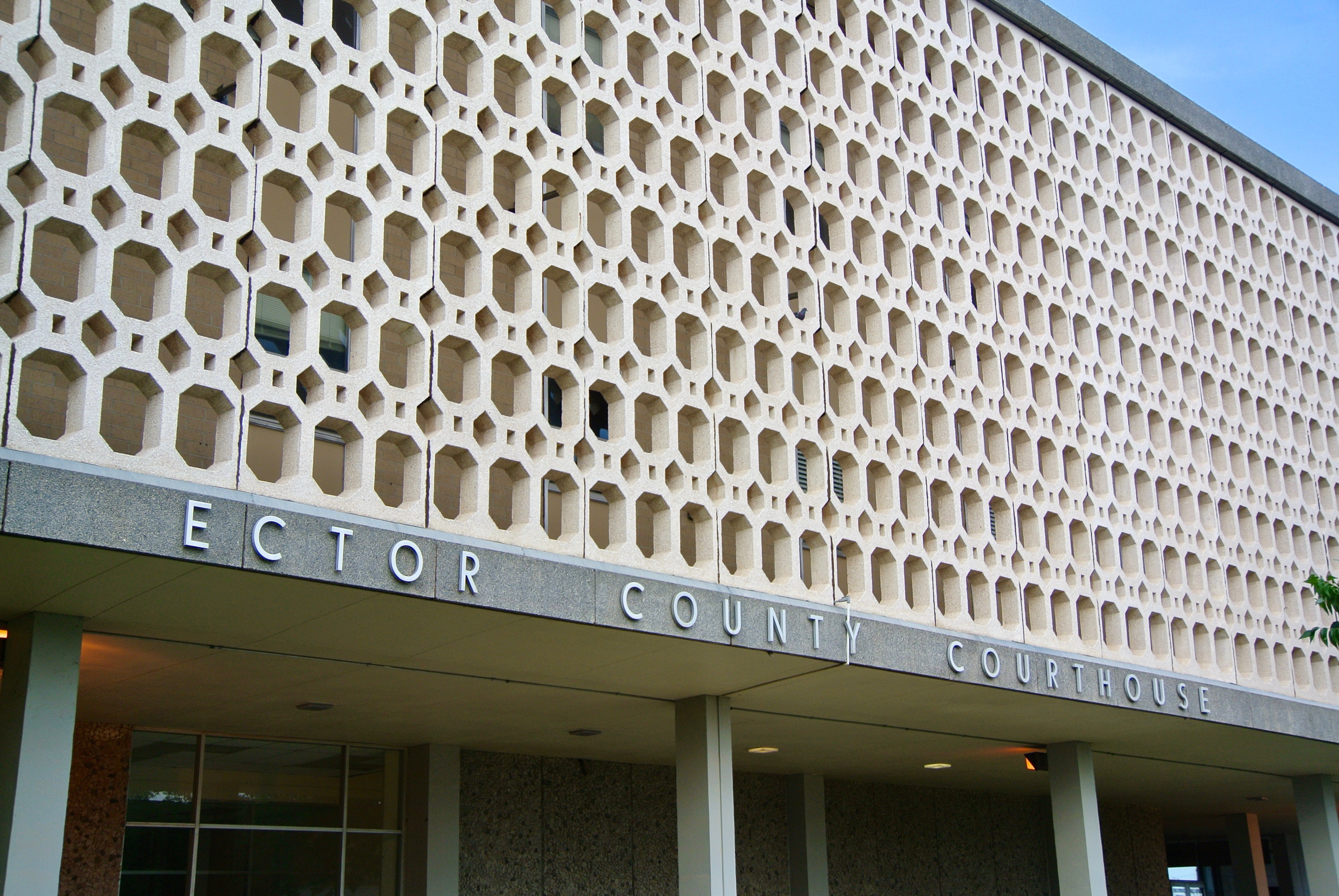 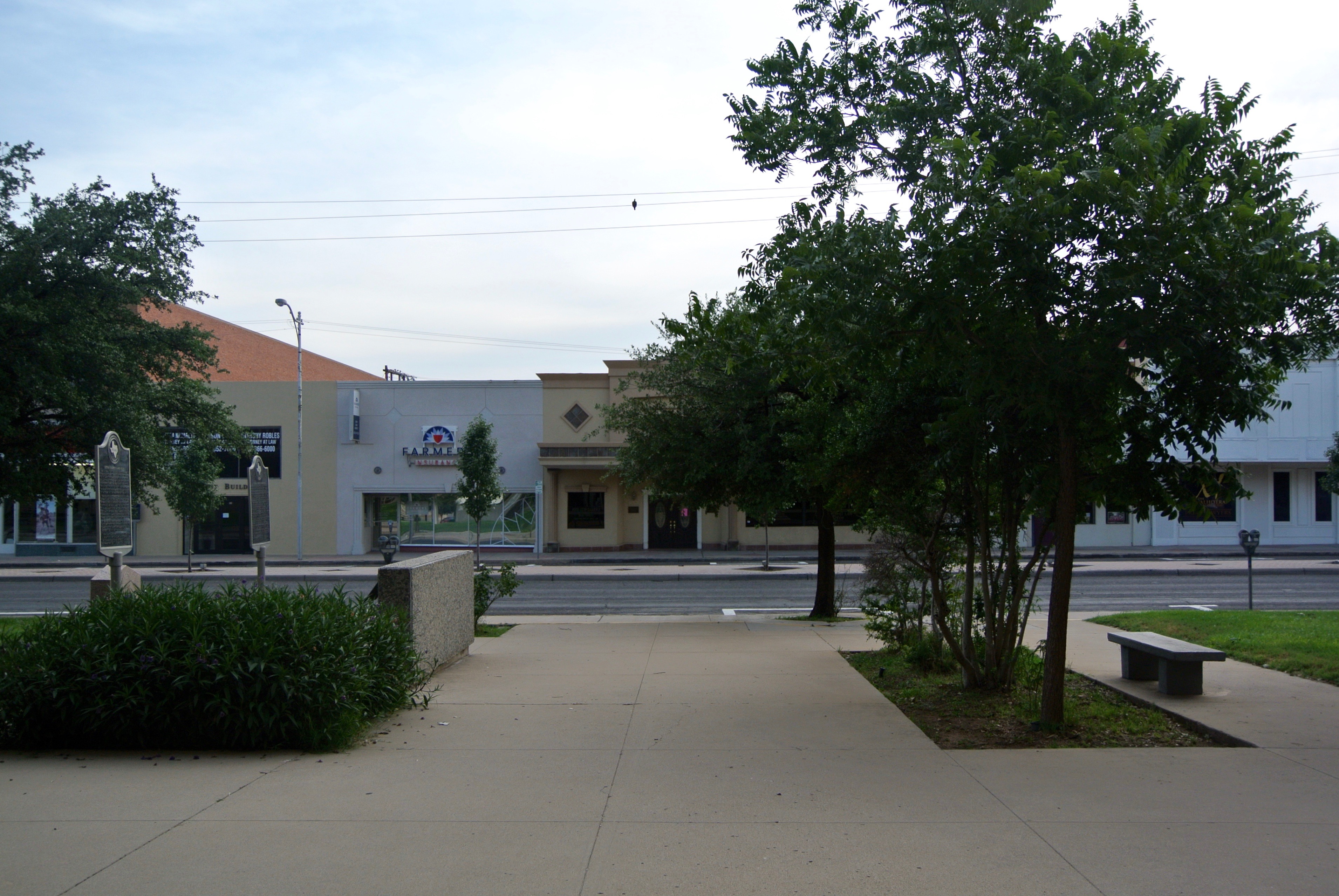 Grant Avenue, as viewed from the western doors

What looks like a maze of stairs and handicap ramps: this is the accessible, southwest entrance. 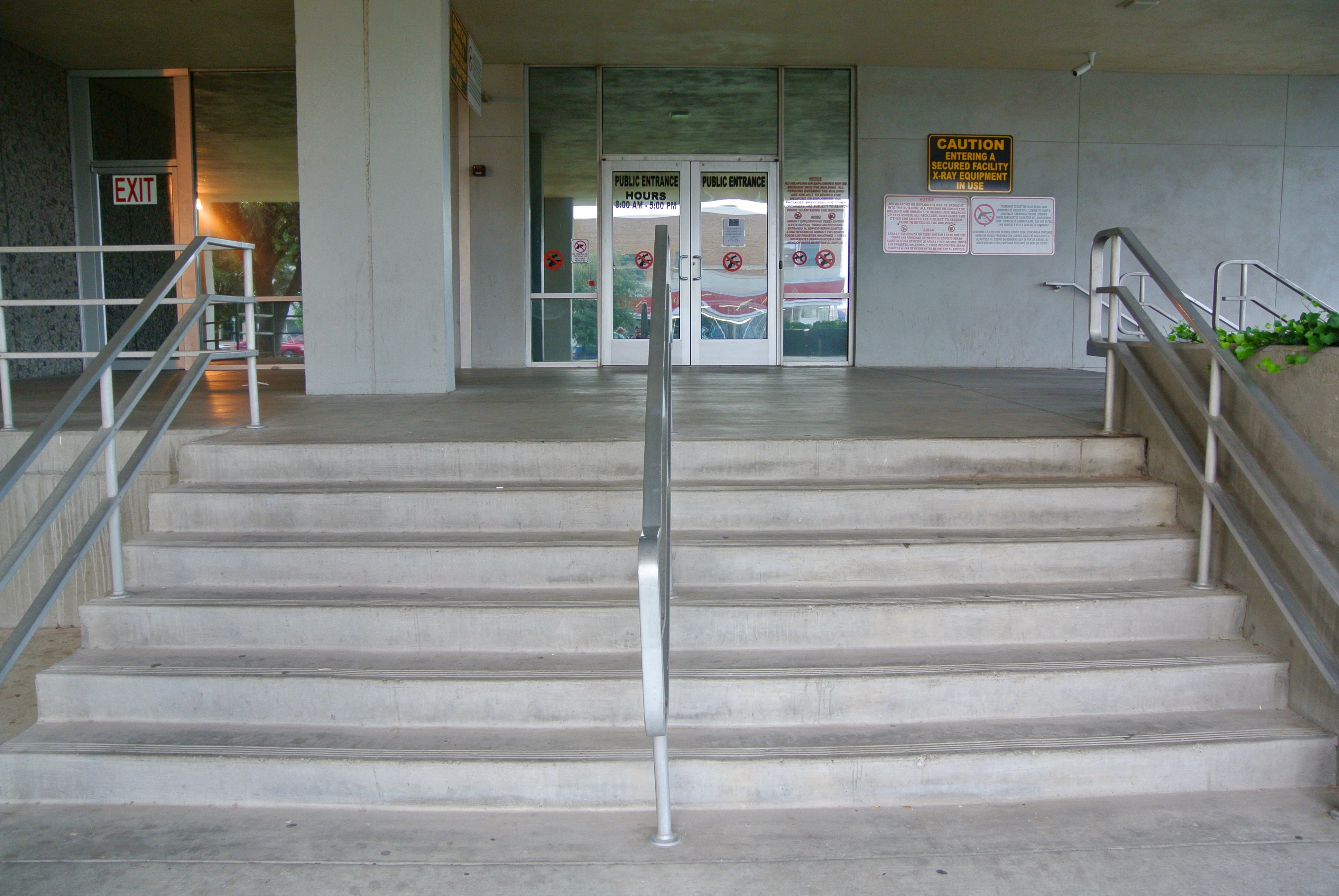 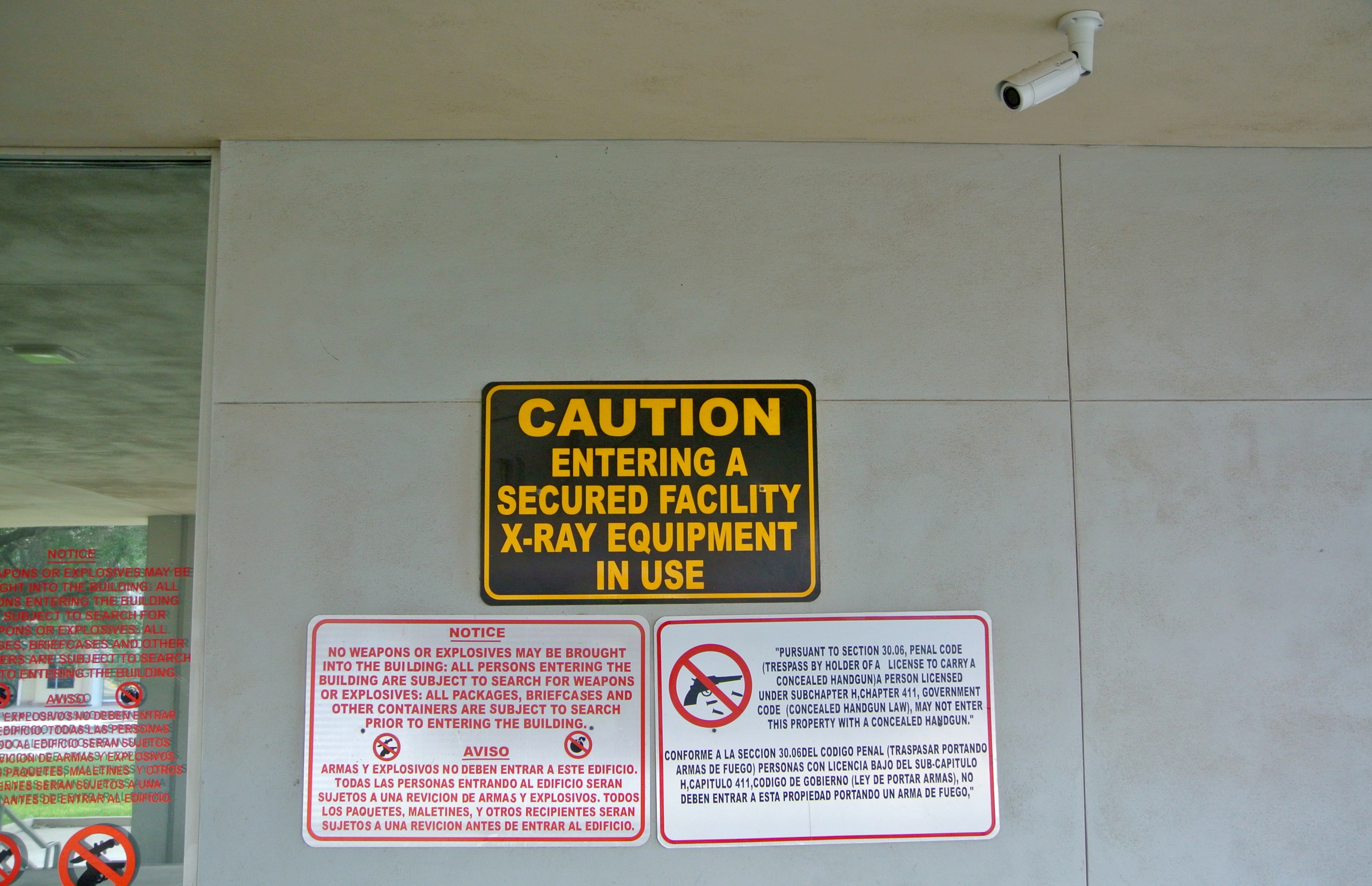 Looking out at the intersection of Grant Avenue & 3rd Street 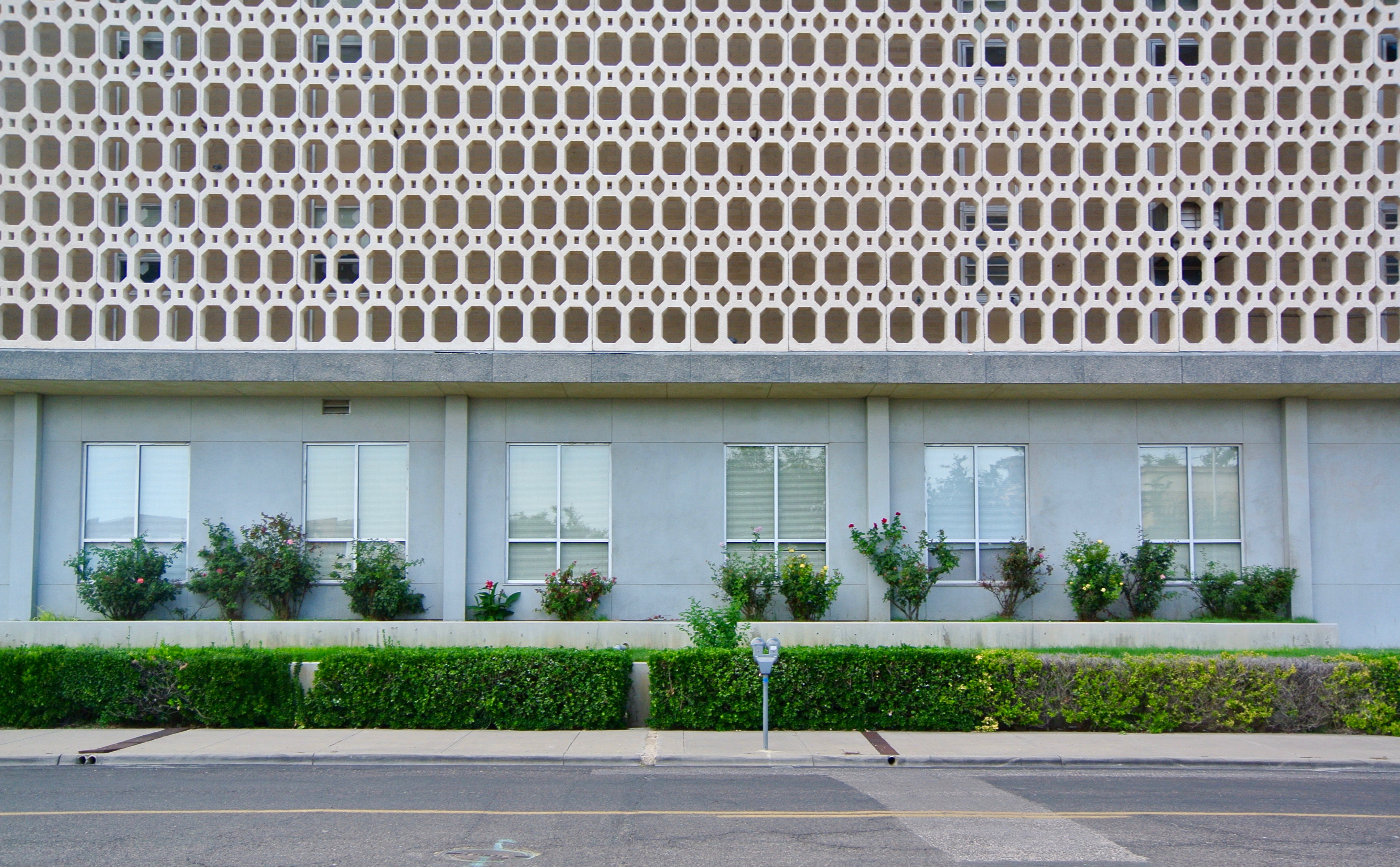 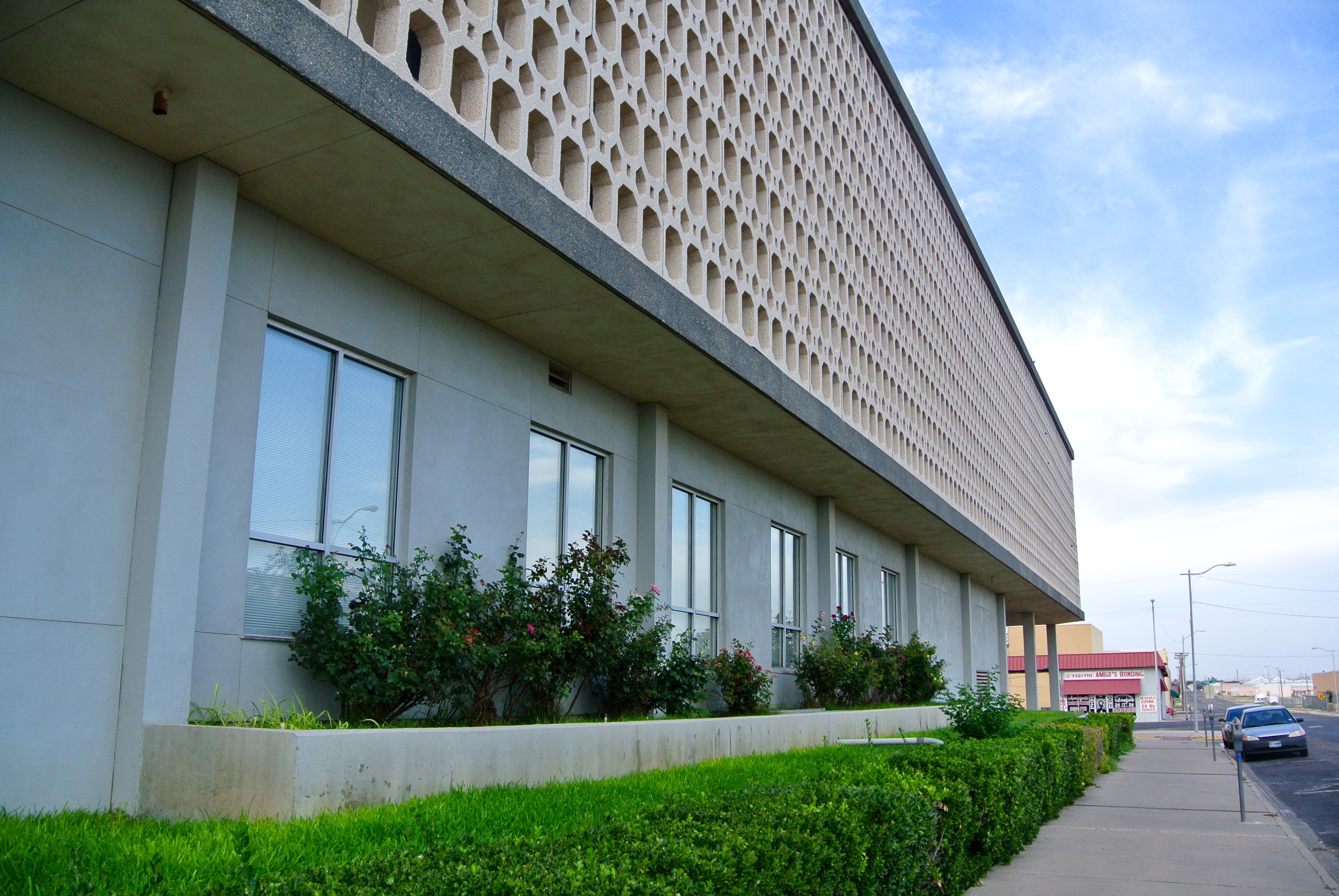 The southeast corner, at the intersection of 3rd Street & Texas Avenue 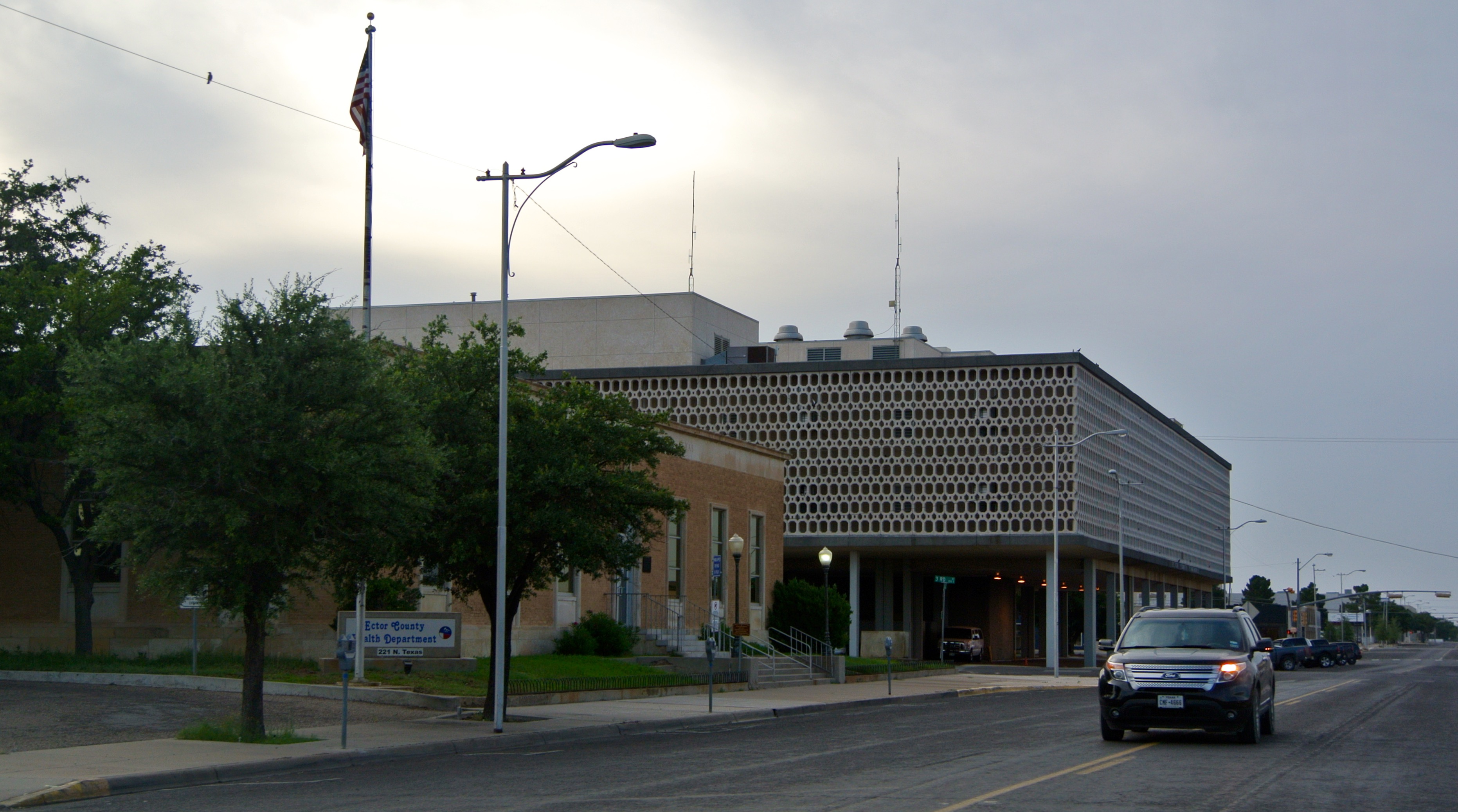 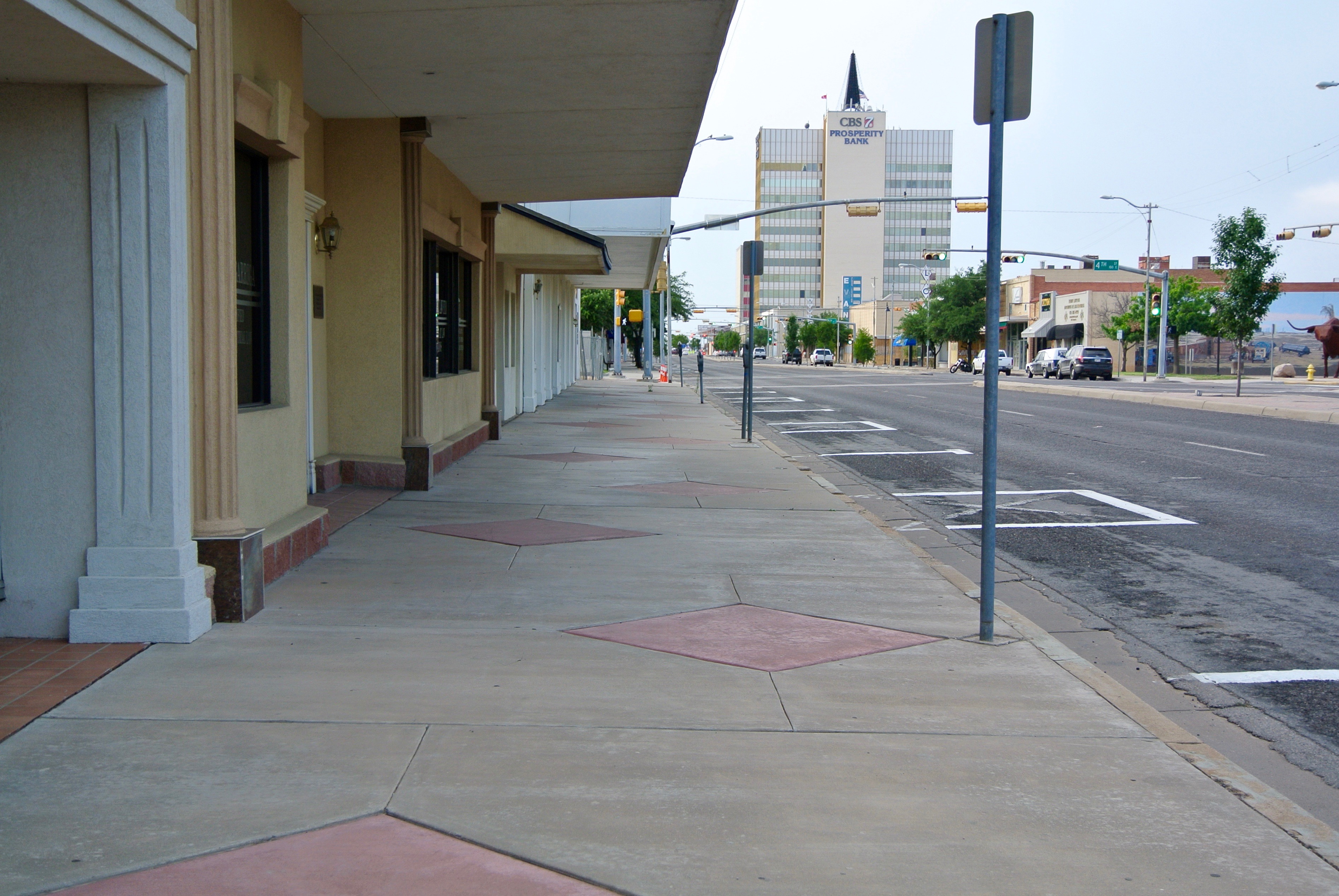 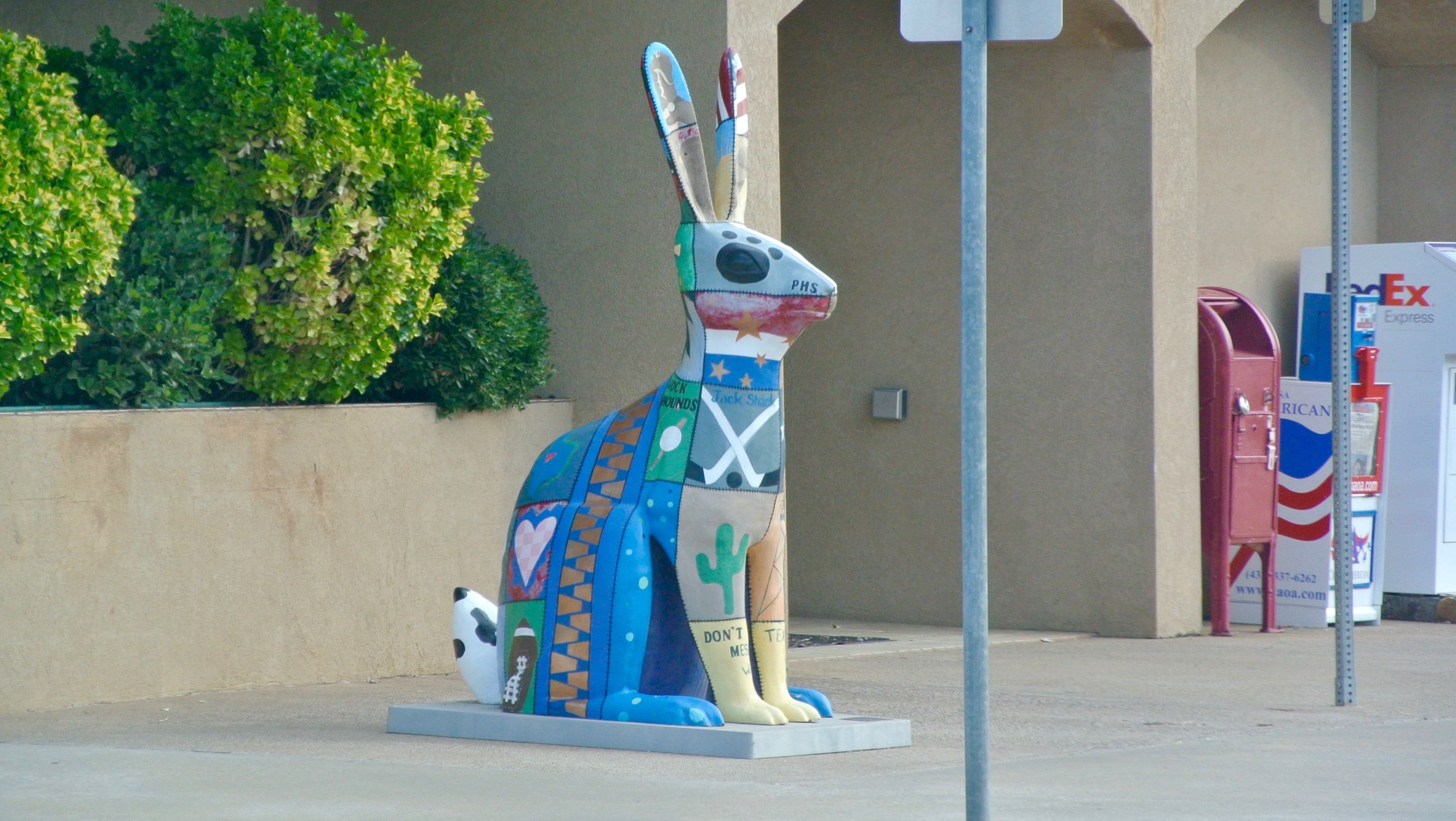 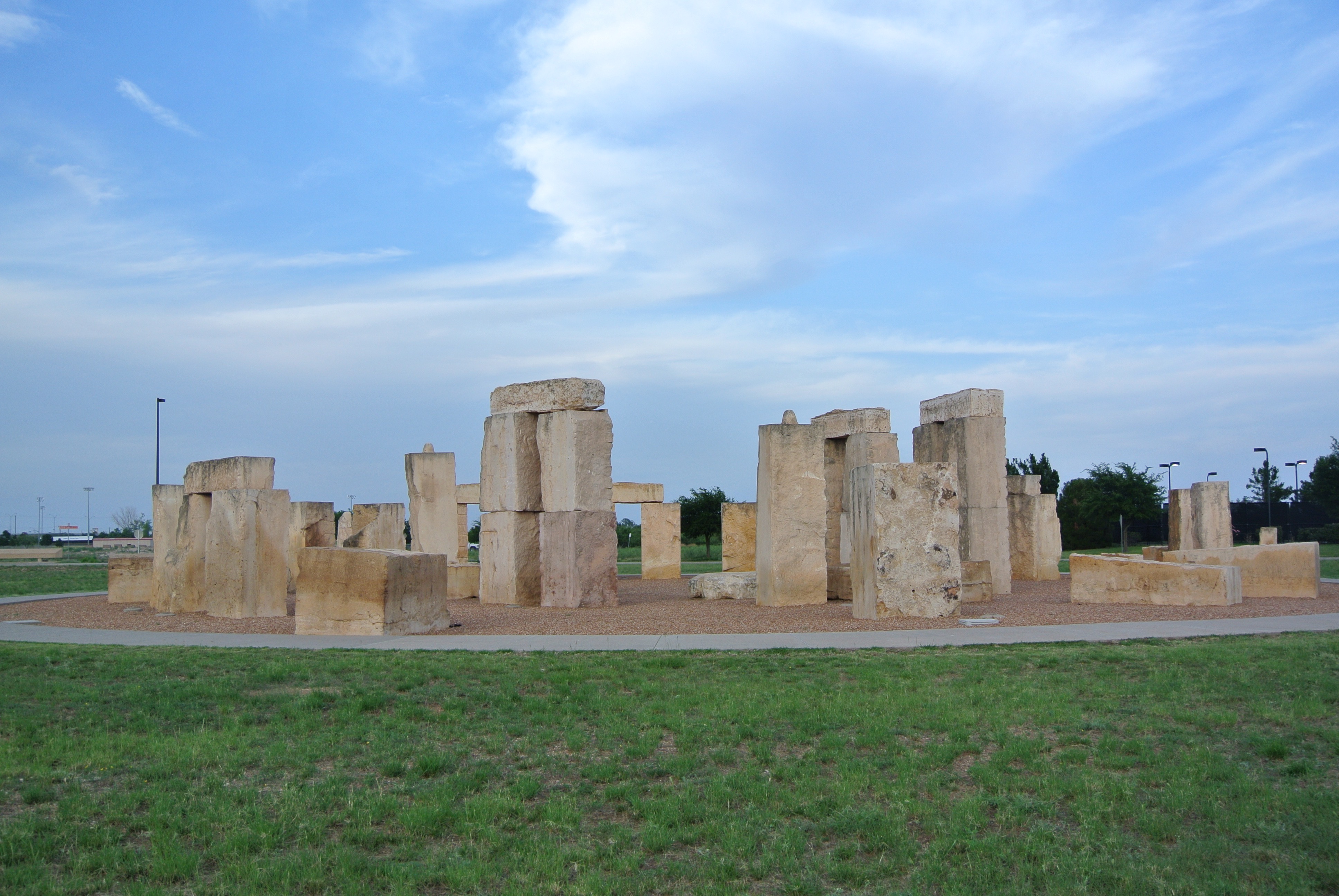 On the east side of town, the University of Texas of the Permian Basin has constructed a replica of Stonehenge. What a find. 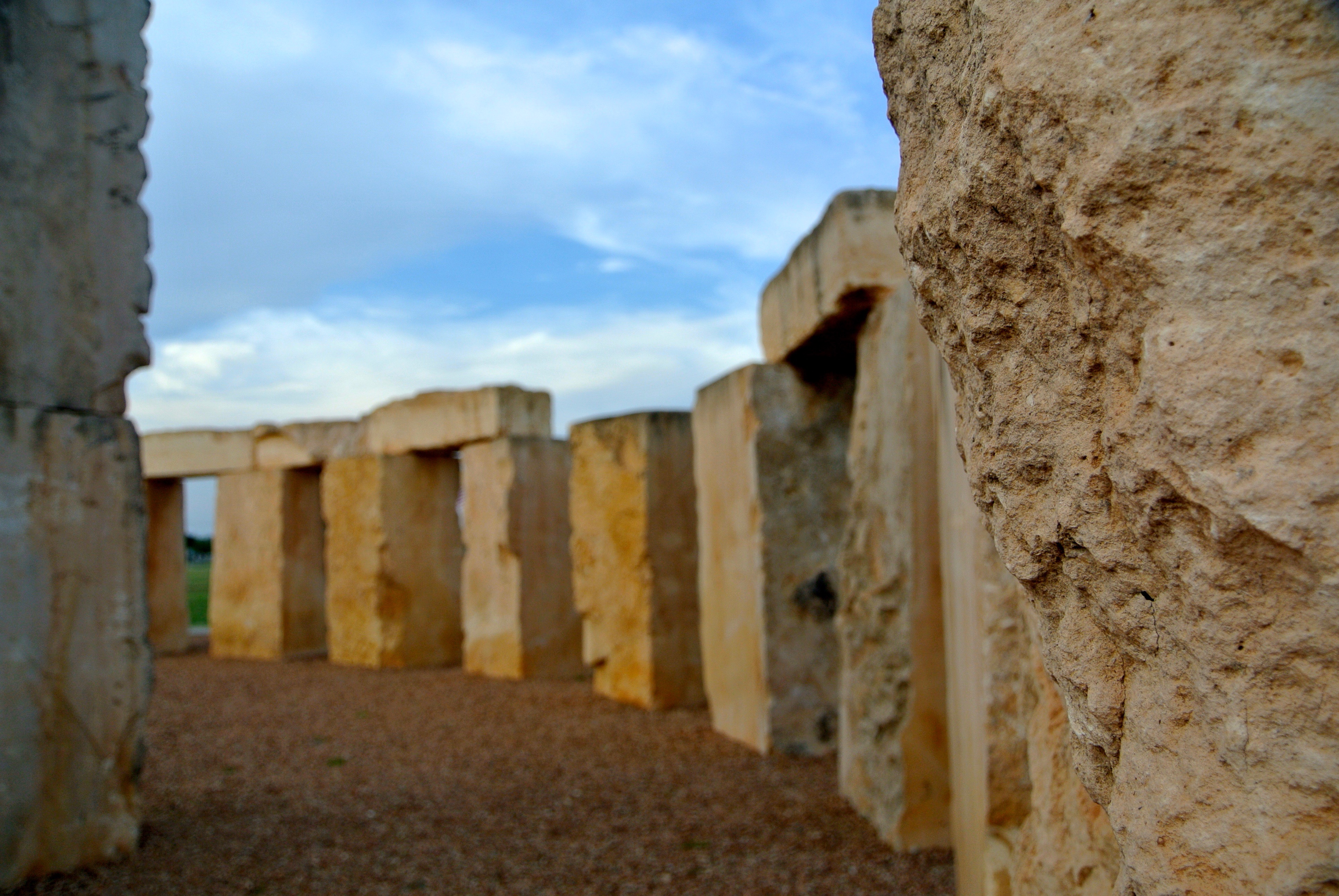 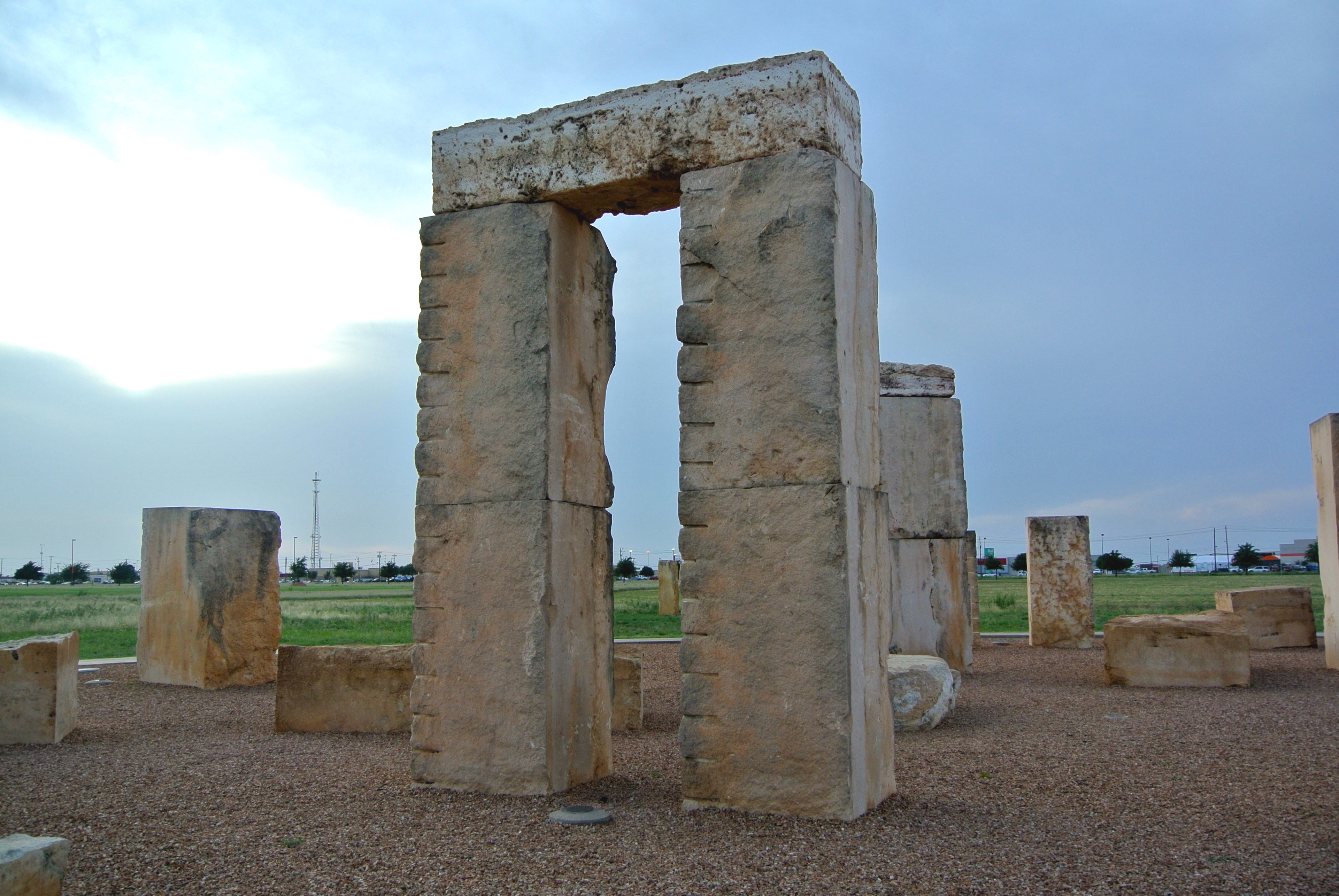