“Gregg County comprises 273 square miles, with an elevation ranging from 230 to 524 feet above sea level. It is within the East Texas timberlands. The terrain is gently sloping to hilly, with well-drained to moderately well-drained loamy and gravelly soils. Numerous streams drain to the Sabine River, which runs through Gregg County from northwest to southeast.”

“Soon after 1800 the Cherokees were driven west across the Mississippi River, and they in turn drove the other Indians out of Northeast Texas and occupied the area. There is much remaining evidence of the Cherokees in Gregg County. One of the earliest roads across Gregg County was the Cherokee Trace, which crosses from north to south and passes over the Sabine near Longview; it was used by the Cherokees when driven from East Texas by President Mirabeau B. Lamar in 1838, and later served as a military road from South Texas to Fort Lawson on the Red River.” 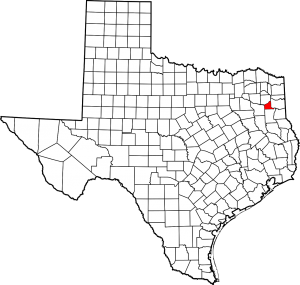 “By 1872 both the International-Great Northern and the Texas and Pacific had built rail lines in the area that became Gregg County, which was marked off from southern Upshur County by the Thirteenth Texas Legislature on April 12, 1873. The bill originally called the new county Roanoke, but during passage of the legislation the name was changed to Gregg, in honor of Confederate war hero John B. Gregg. Longview was selected as the county seat. By an act of the Fourteenth Legislature, on April 30, 1874, Gregg County was extended southward to add a portion of northern Rusk County.”

“In censuses between 1880 and 1930, with the exception of 1920, black residents in Gregg County were more numerous than white. In 1910 blacks comprised 55 percent of the county population, and in 1930, 52 percent. After 1931, with the influx of oil entrepreneurs and their employees, the white population increased considerably relative to the number of blacks.”

“From 1880 to 1930 Gregg County was predominantly agricultural, with cotton and corn as the most important crops. The number of farms increased steadily to a high of 2,000 in 1930 and then began to decline. By 1982 the county had only 378 farms, which produced primarily beef cattle and hay. Agricultural land values were high, however; farm property was valued at $60,453,918. Manufacturing, related primarily to the lumber industry, was relatively limited from 1880 through the 1920s.”

“In the early twenty-first century oil, manufacturing, tourism, agribusiness, and lignite mining were central elements of the area’s economy.” 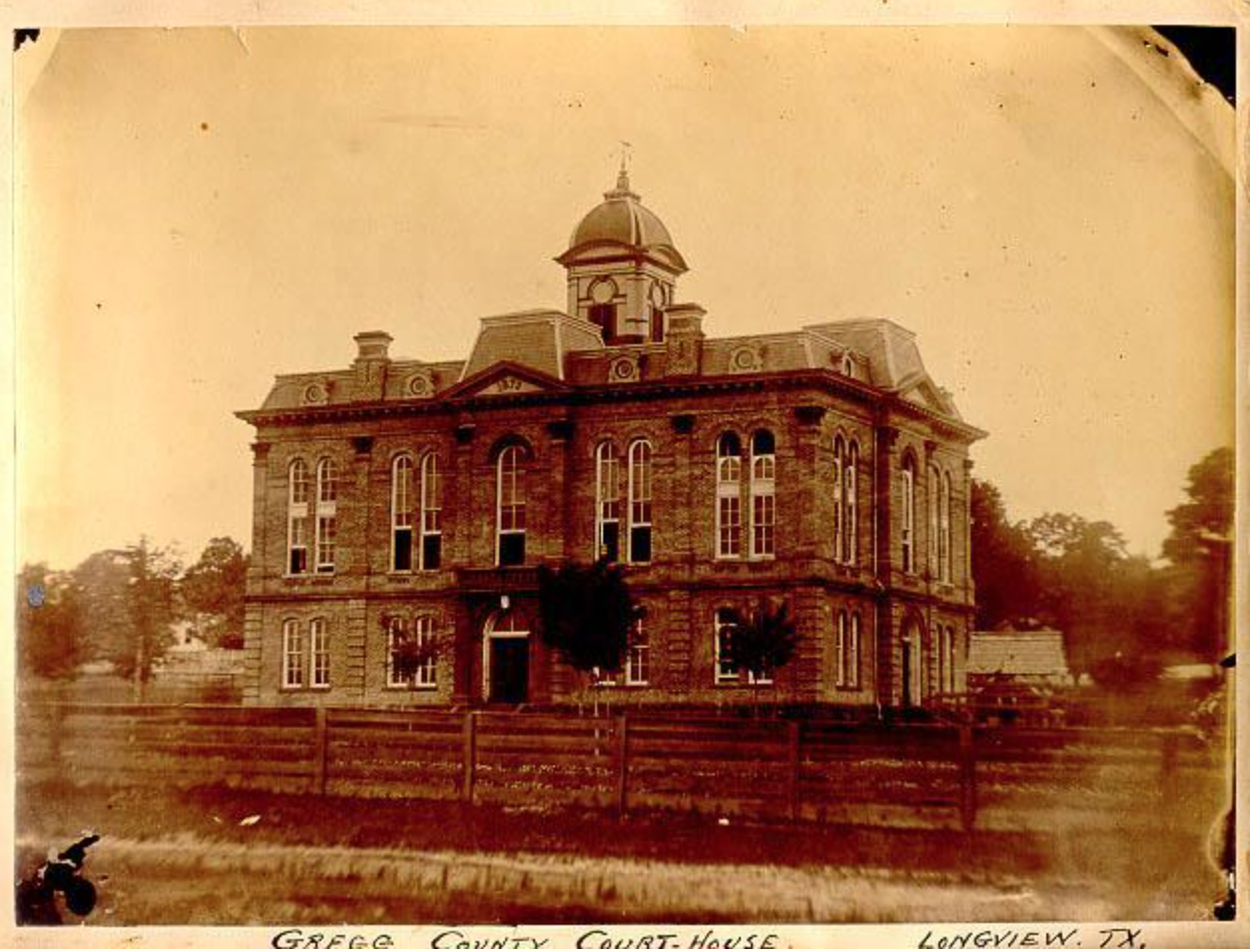 Designed by F.E. Ruffini in the Second Empire style, this was built in the year 1879 by contractor John McDonald for a total of $13,447.00. For reasons unclear, it no longer exists. 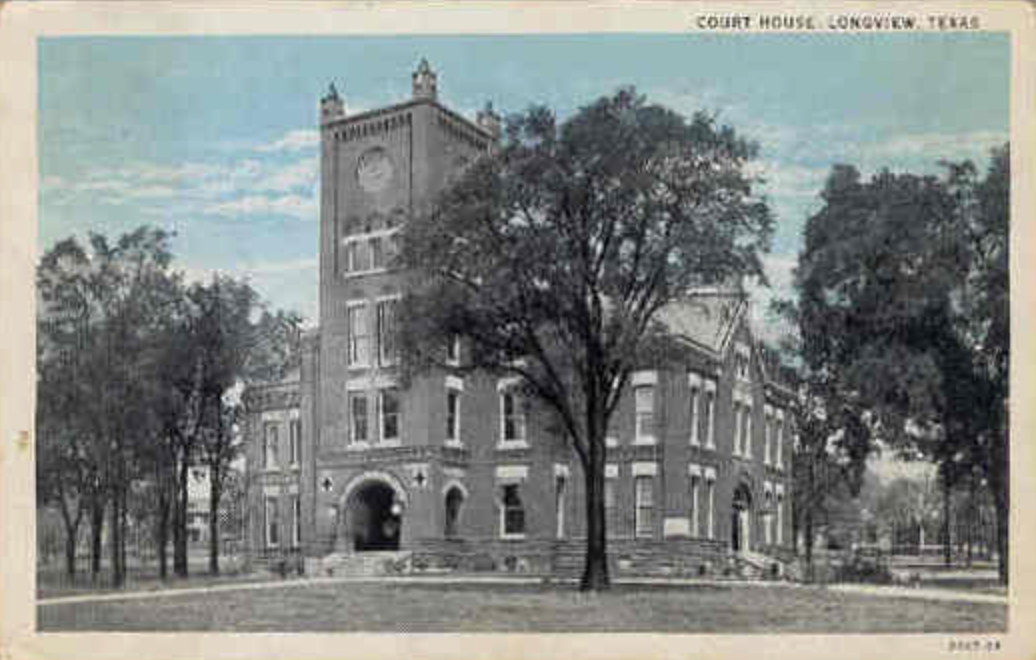 Designed by Marshall R. Sanguinet and constructed by G.W. Donaghey on the exact same site as the 1879 courthouse, the building’s distinctive red bricks soon gave rise to the apparent local nickname: “The Old Red Courthouse”. That’s curious, as that nickname is still in use for the Dallas County Courthouse four counties to the west.

This building too met its end. Historical trend would point to it having been demolished during the Great Depression years, but I can’t be completely certain. 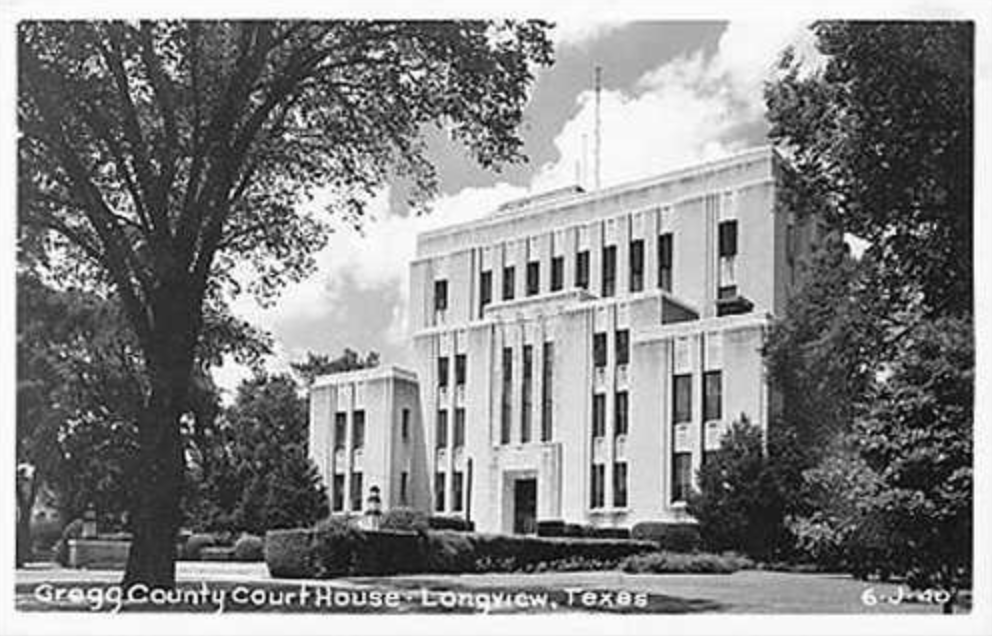 This massive Moderne building was designed by renowned architectural team Voelcker & Dixon. The original structure was constructed by C.S. Lambie. In the words of the Texas Historical Commission, it is a:

“Six [story] brick, terra cotta and marble courthouse that reflects the character of municipal buildings of the period with its adherence to the design motifs of the Art Moderne style. The courthouse is conceived as a series of rather blocky forms, with ornamentation confined to the main entrance bay and to the spandrel panels between floors. As was often the case with 1930′s courthouses in Texas, the county jail was incorporated into the design, being located above the offices and courtrooms in the tallest section of the building.”

A massive annex was added in 1958, constructed by the McClendon Construction Co.

At first glance, this courthouse is large, but still relatively small when you compare it to the size of a city like Longview and a county as populated as Gregg County. 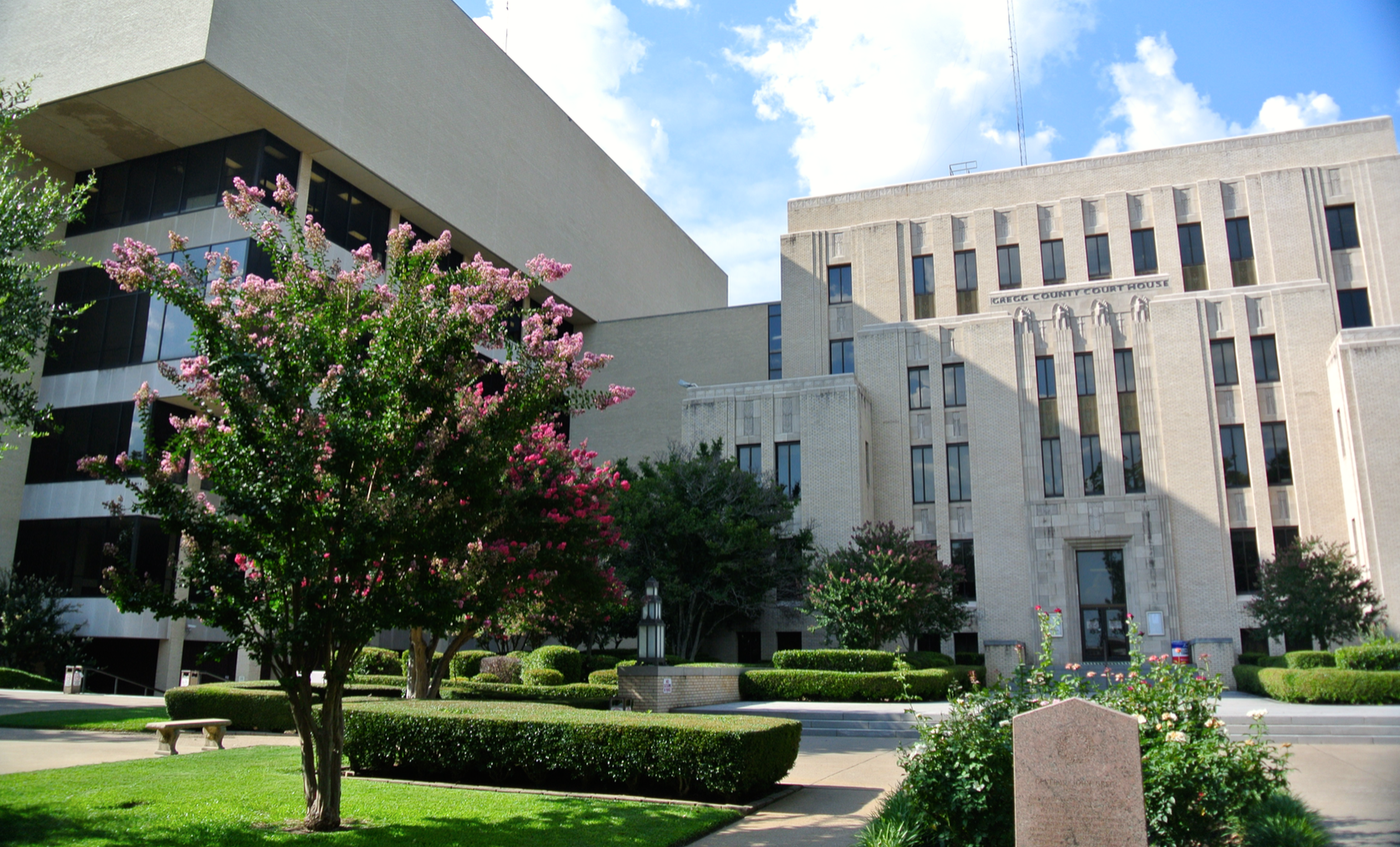 Quickly, however, one spies the enormous annex that joins the courthouse at its northwestern side. 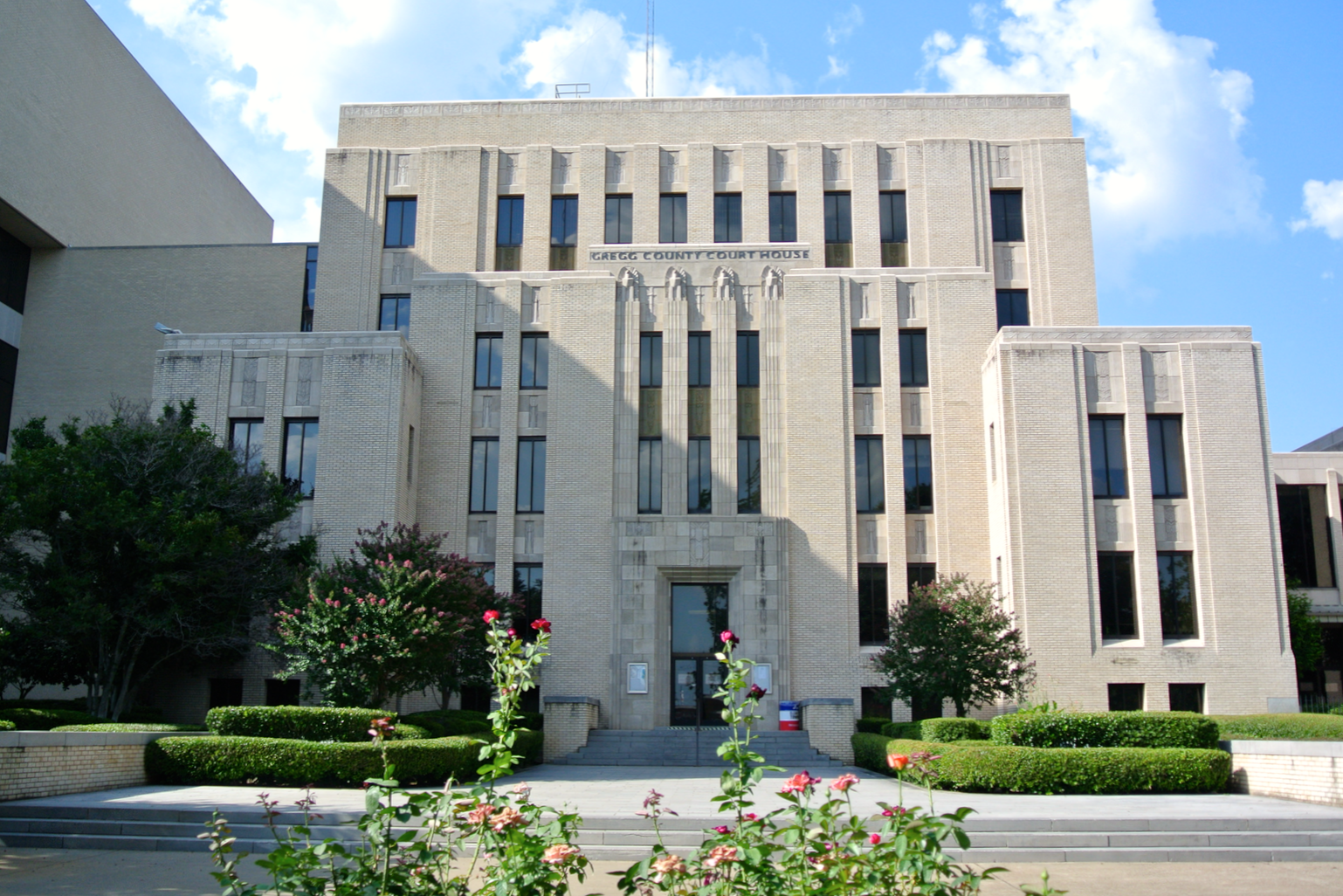 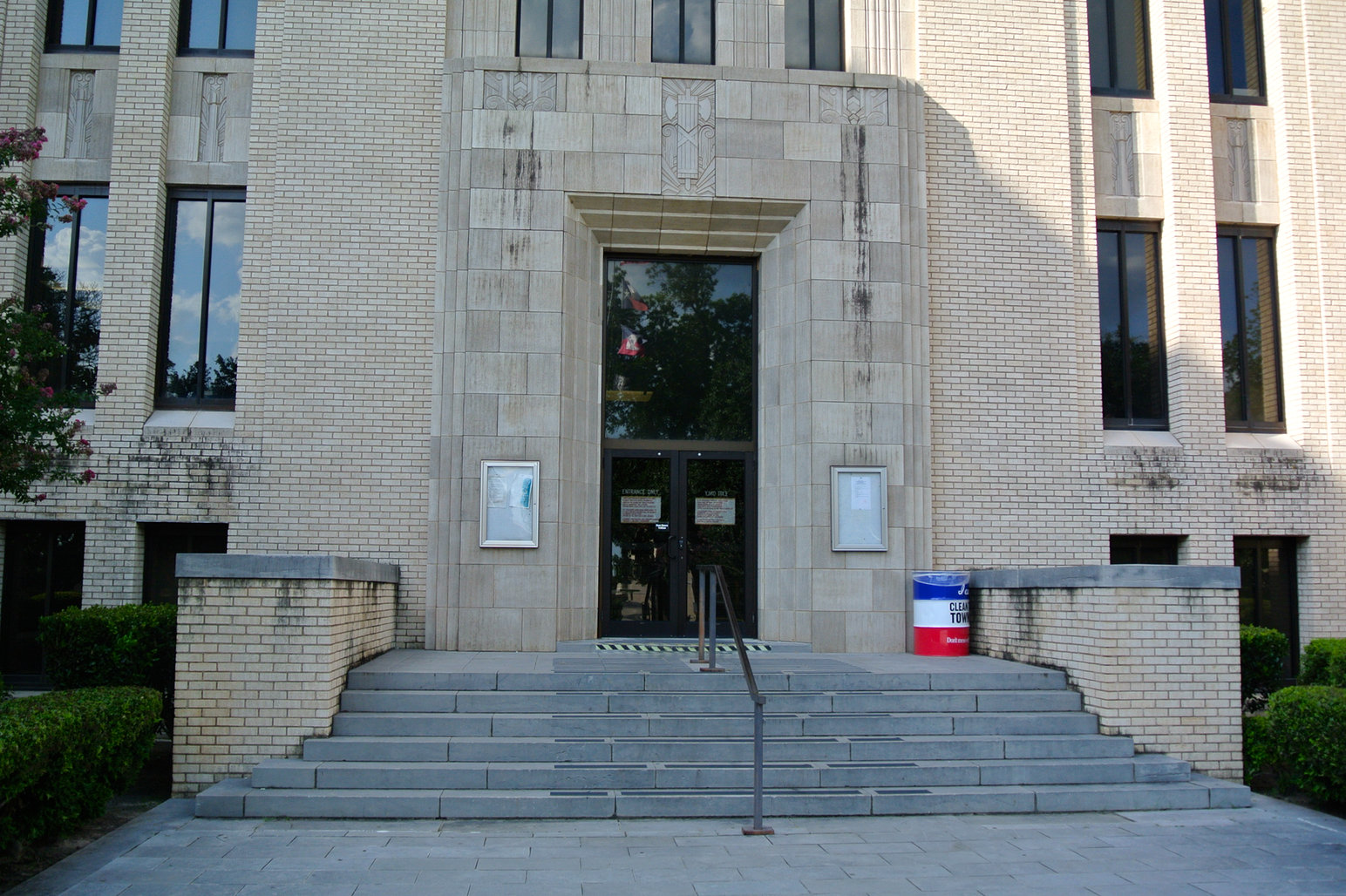 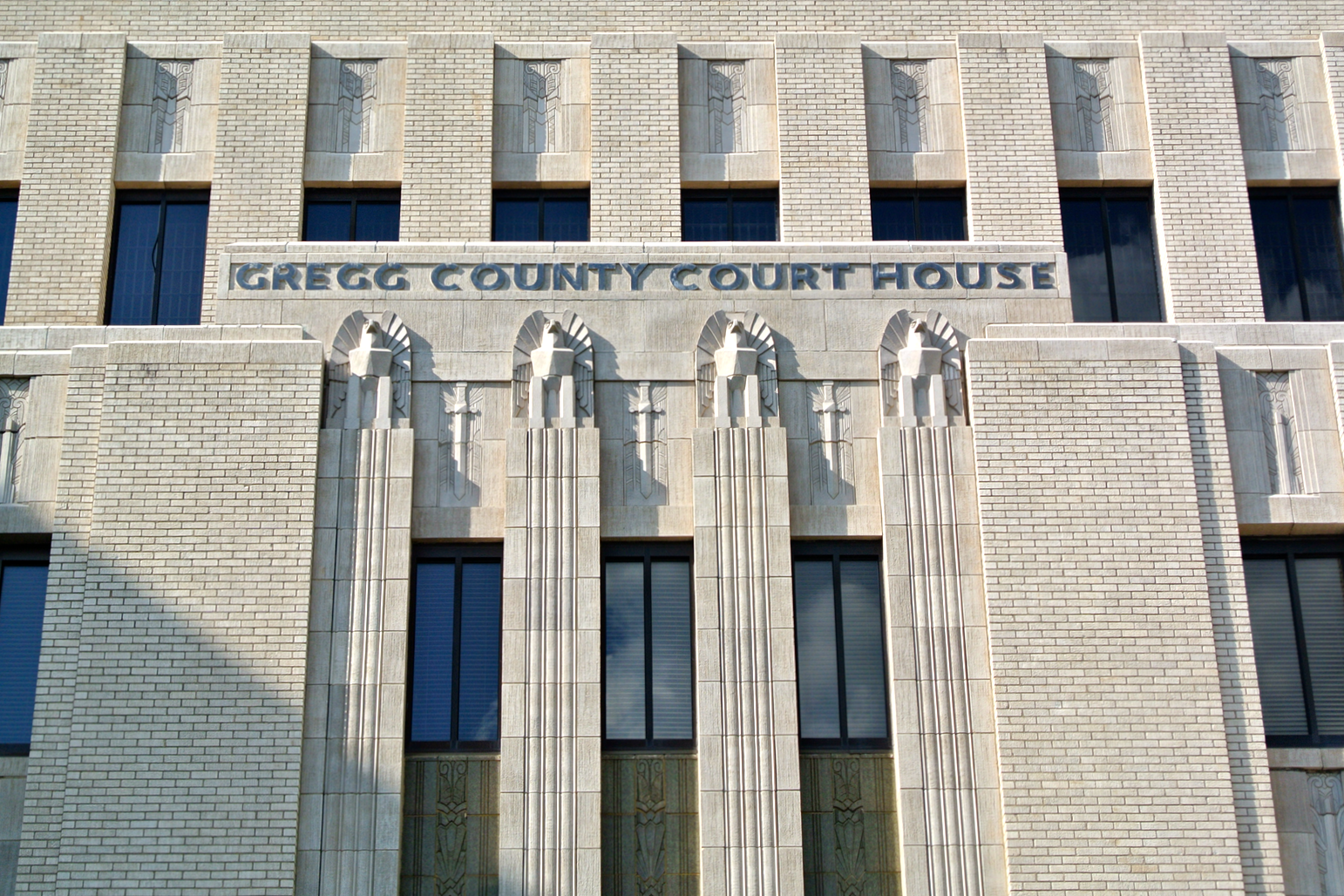 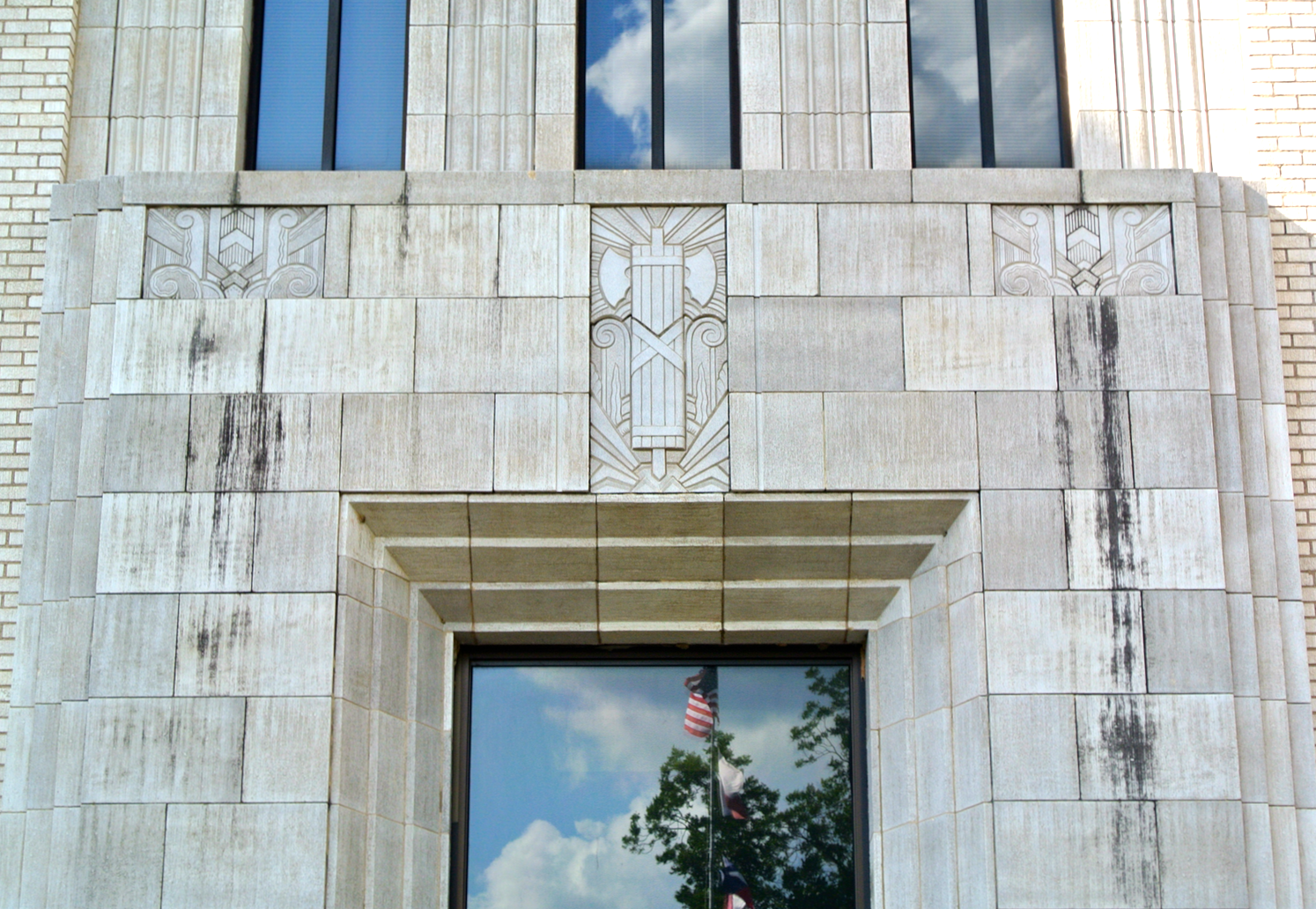 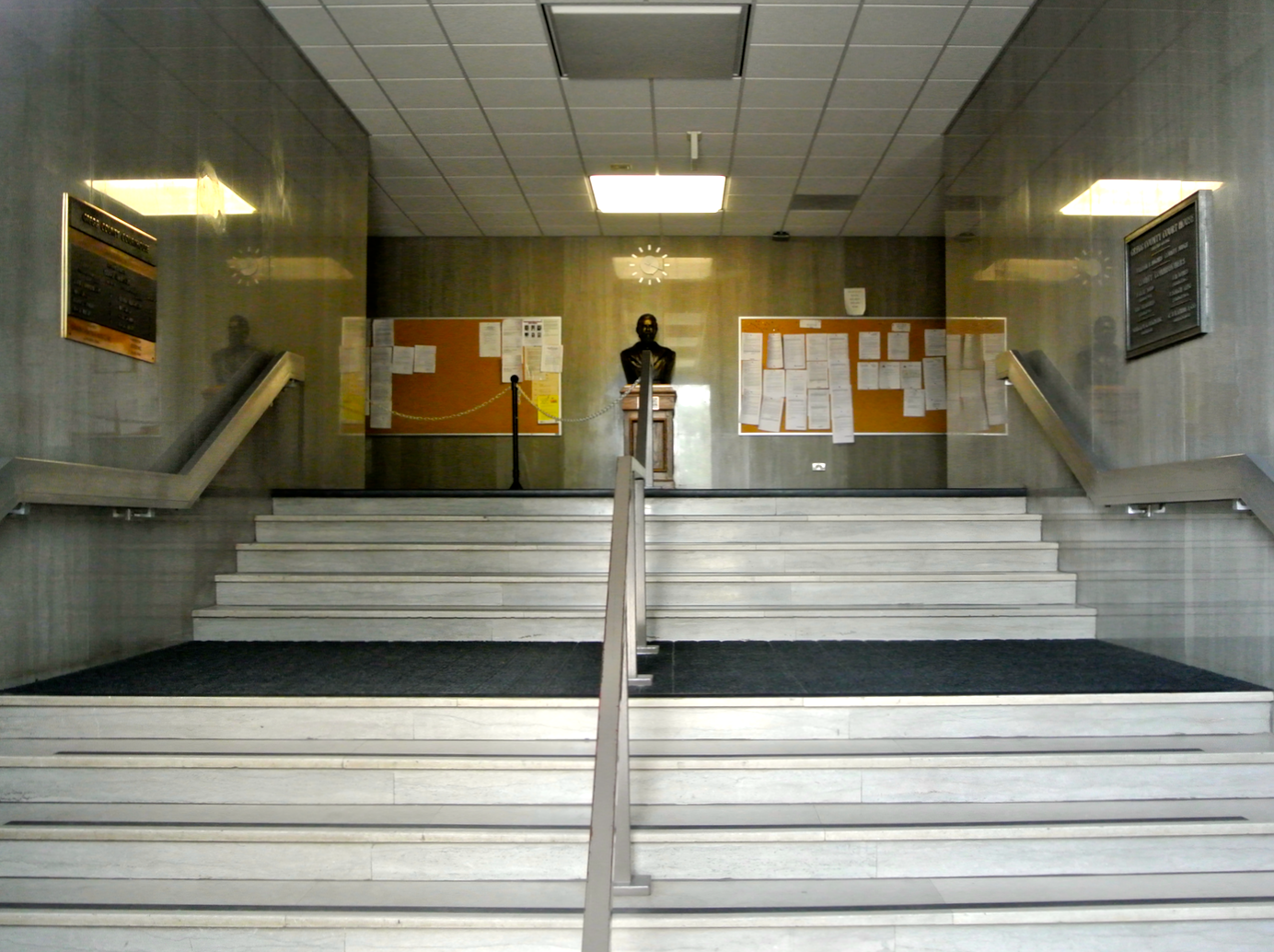 The courthouse was closed when I arrived, but here’s a shot through the front doors. 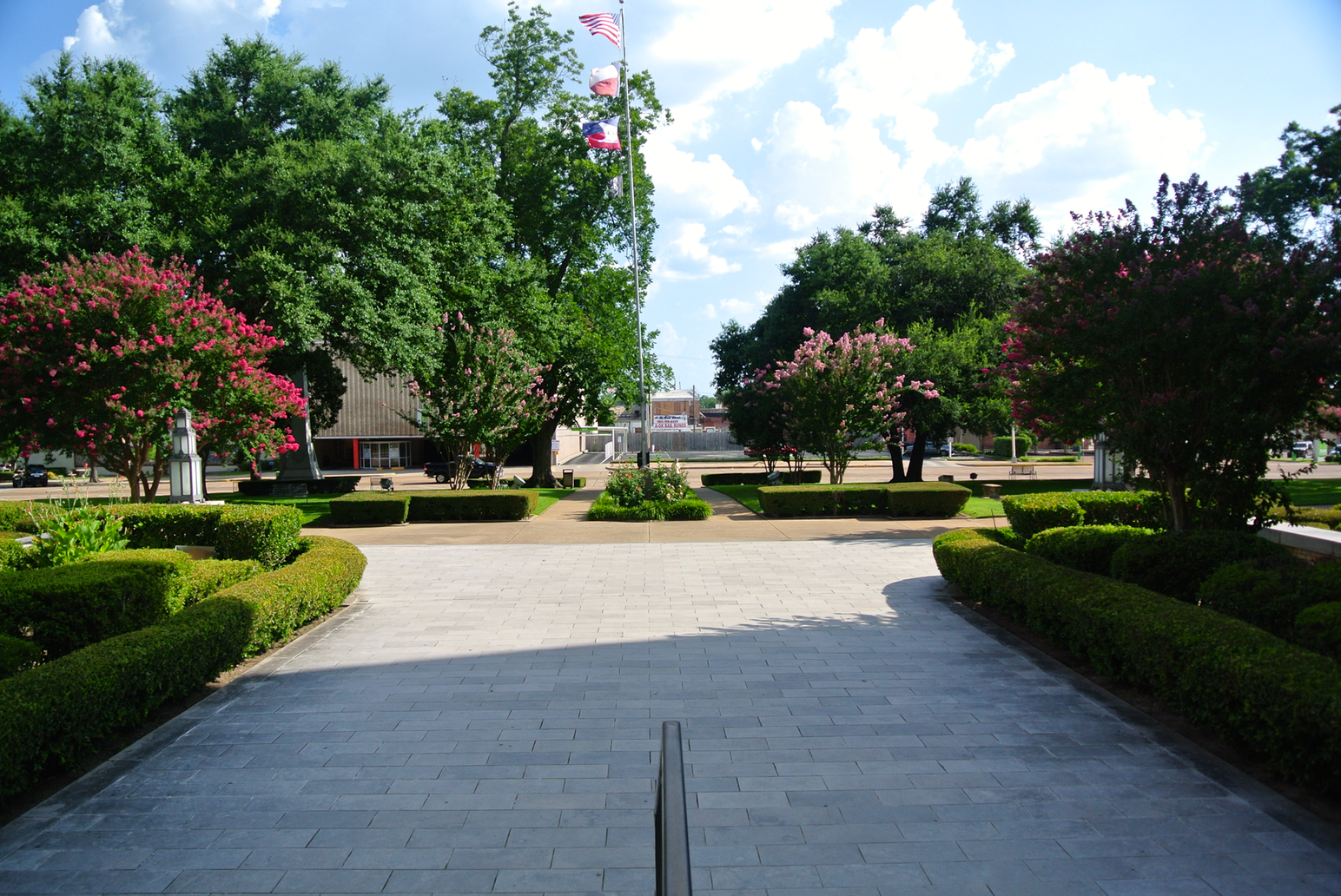 Methvin Street, as seen from the main entrance 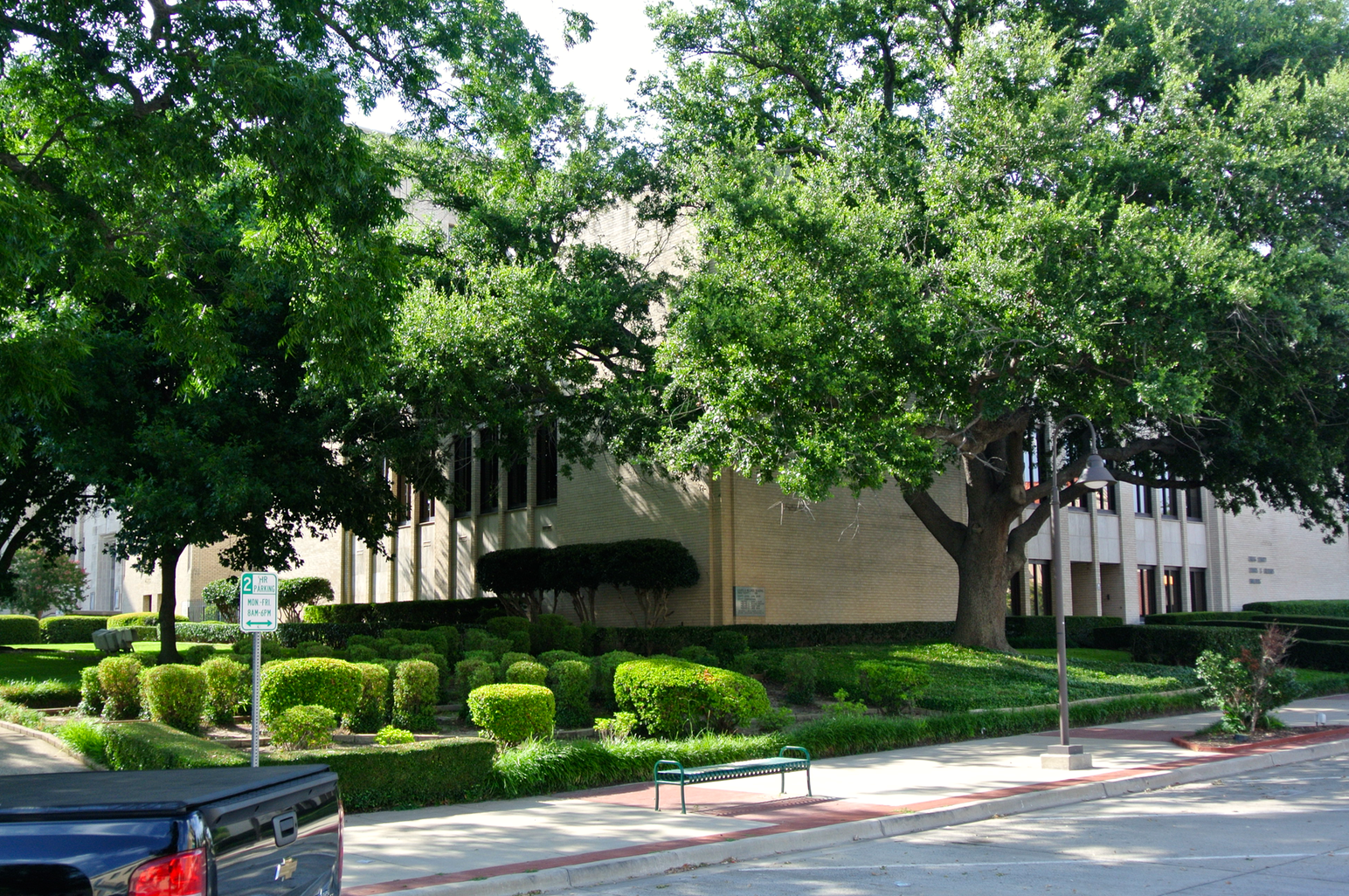 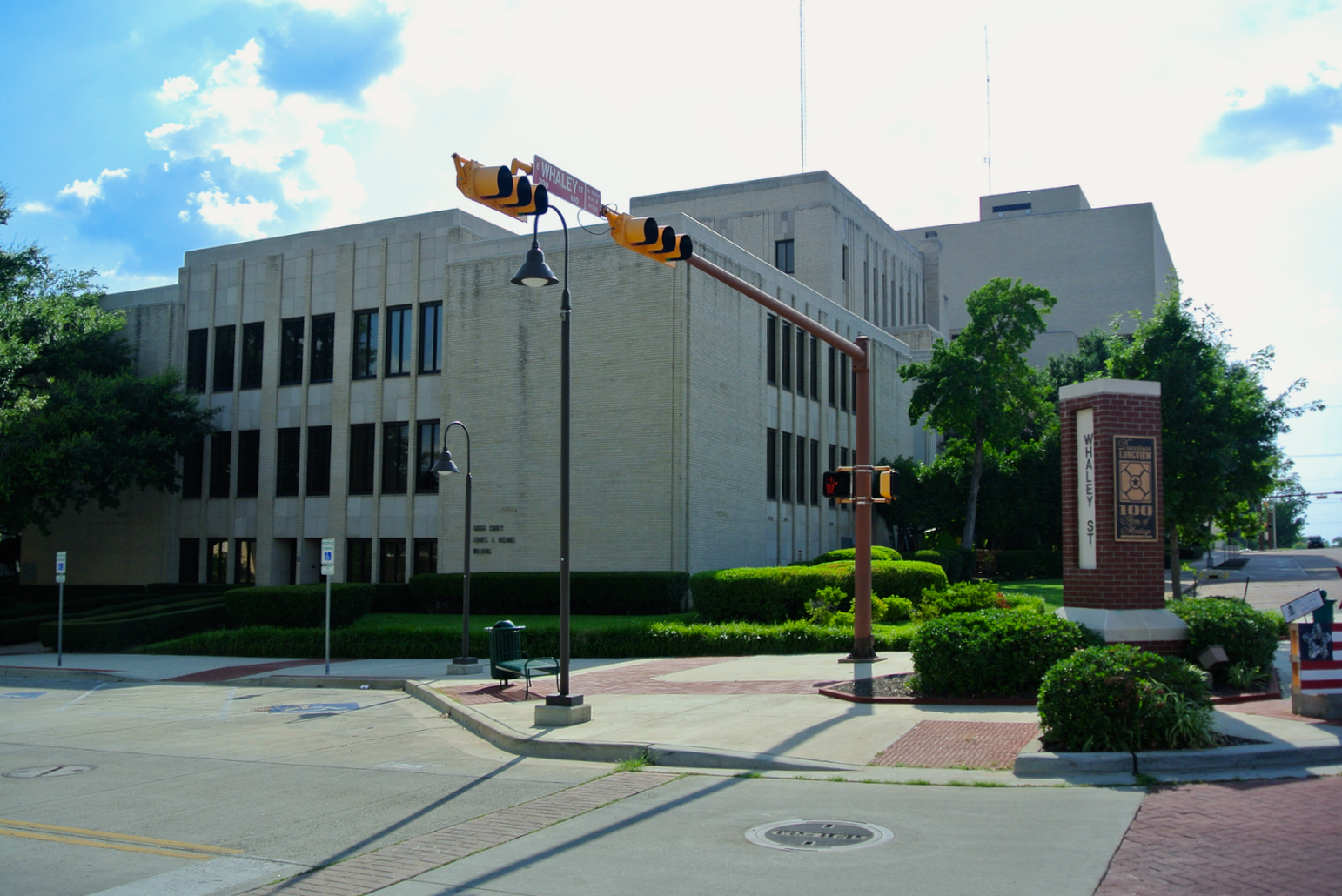 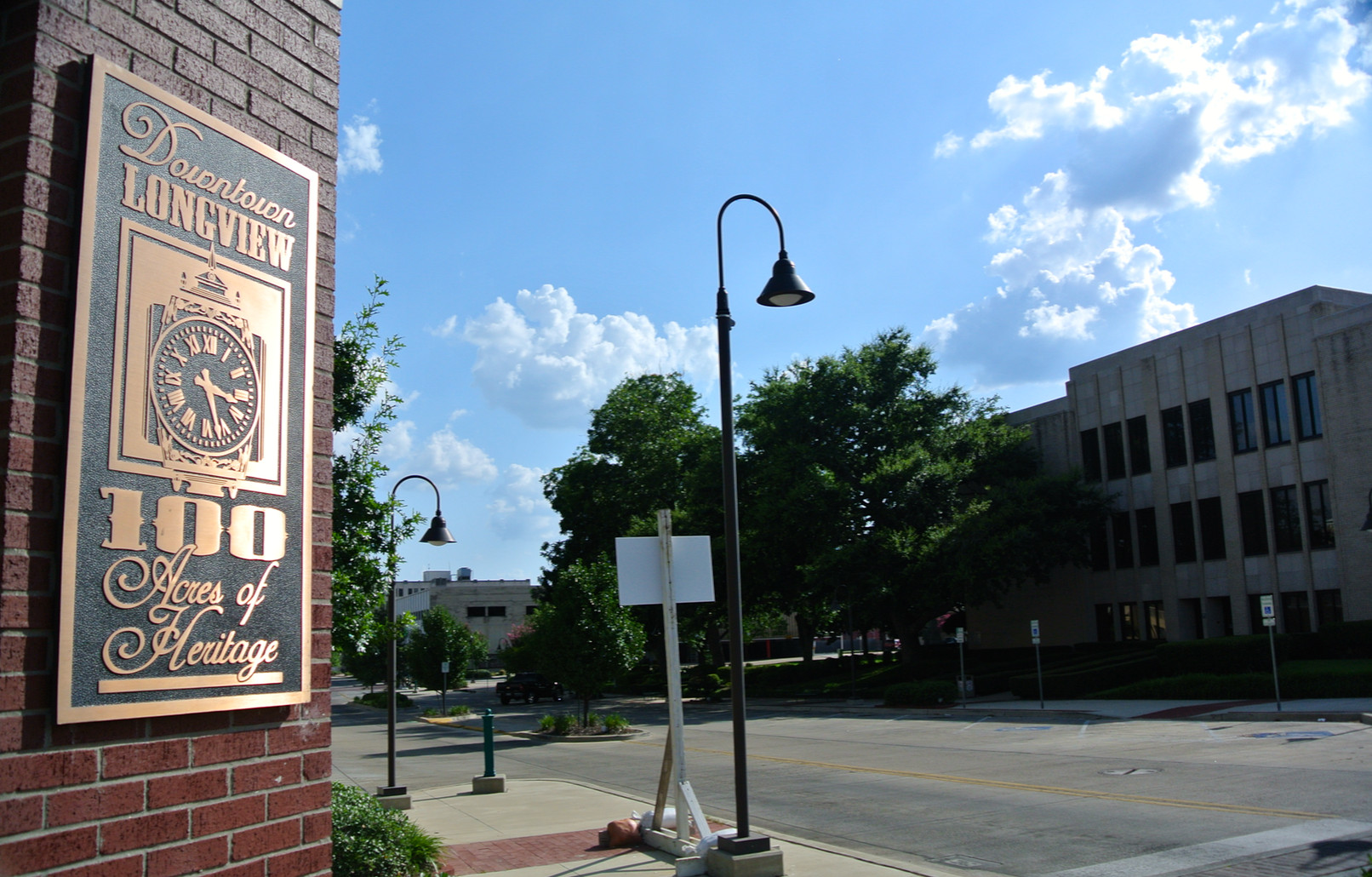 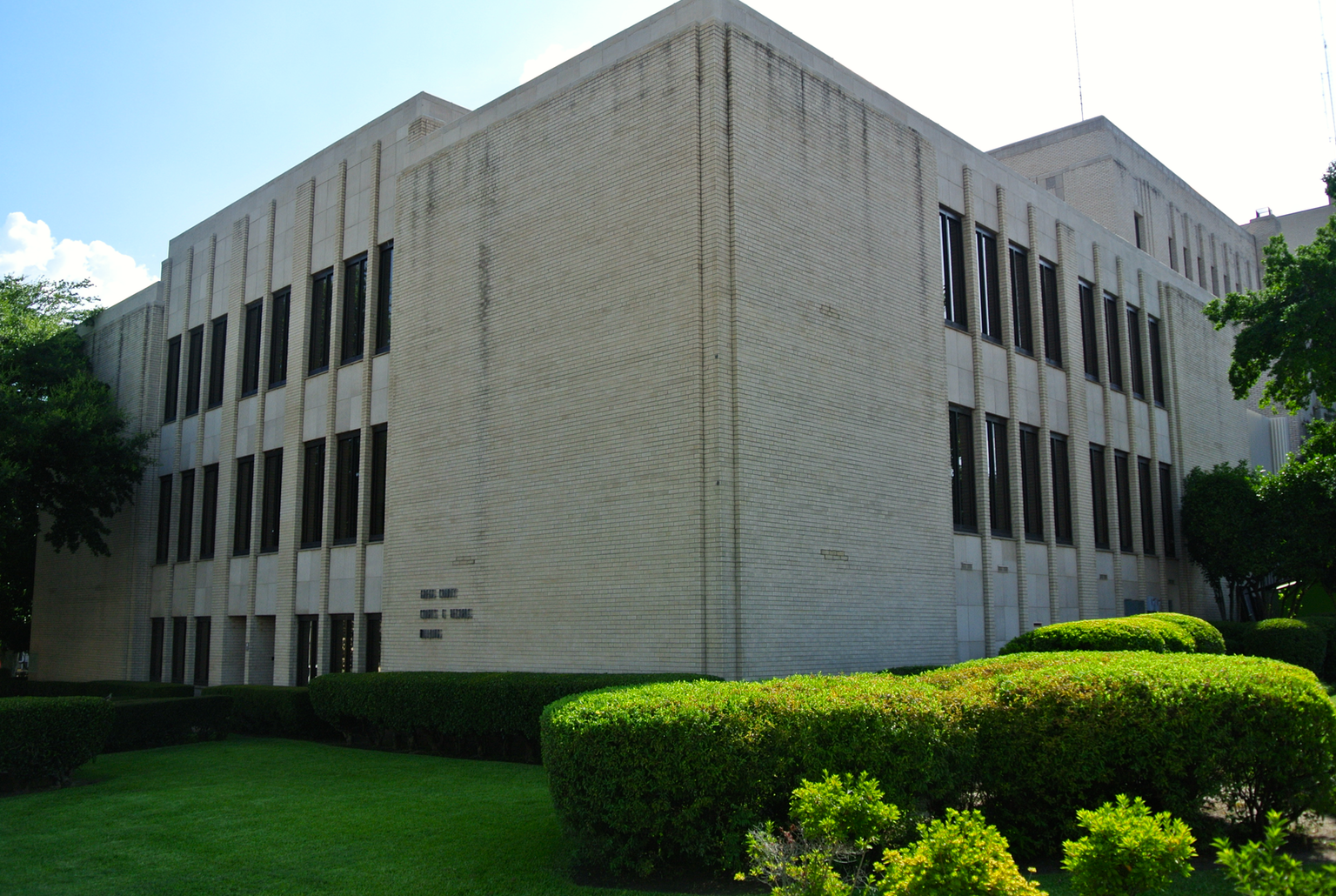 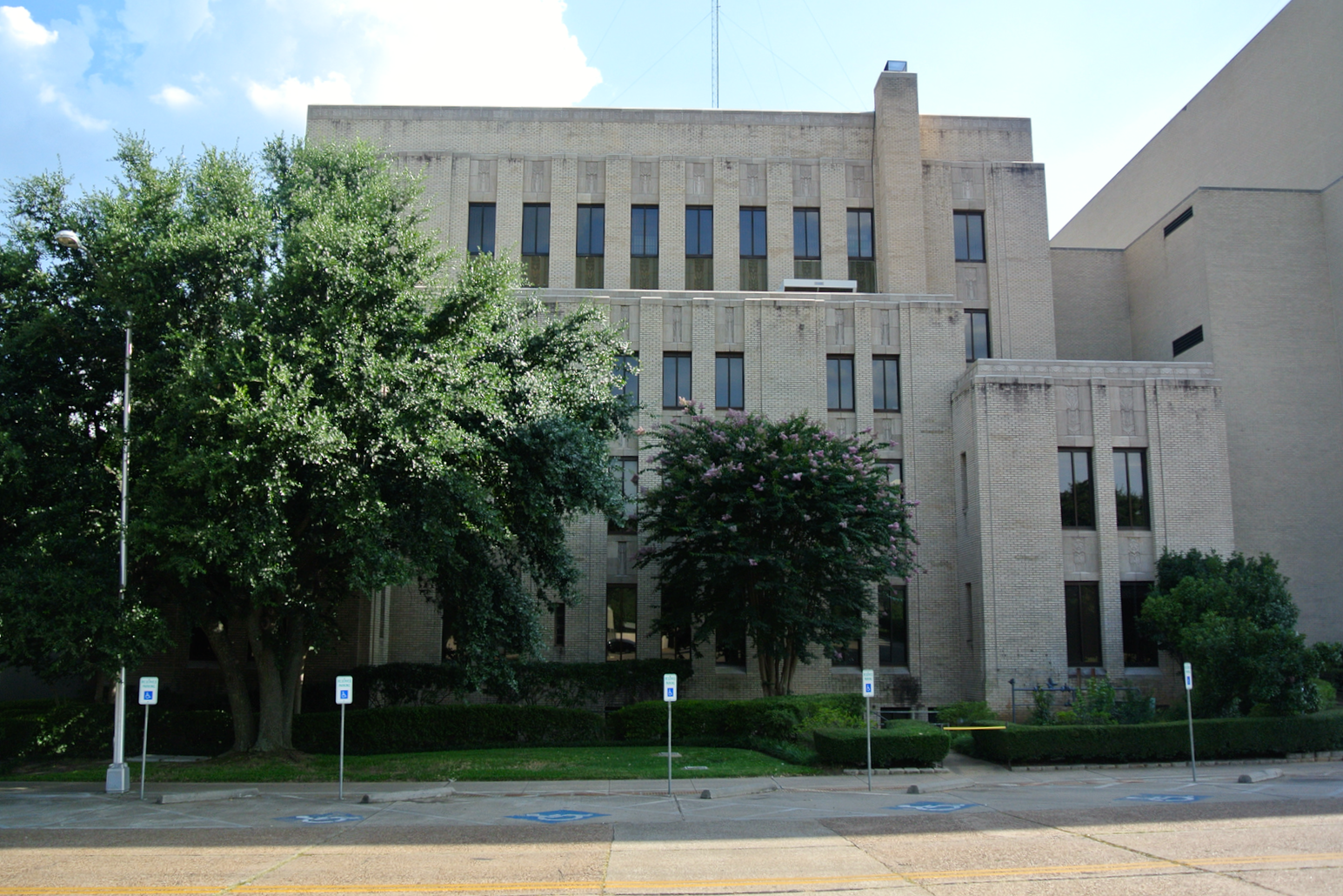 The rear of the courthouse, facing north on Whaley Street 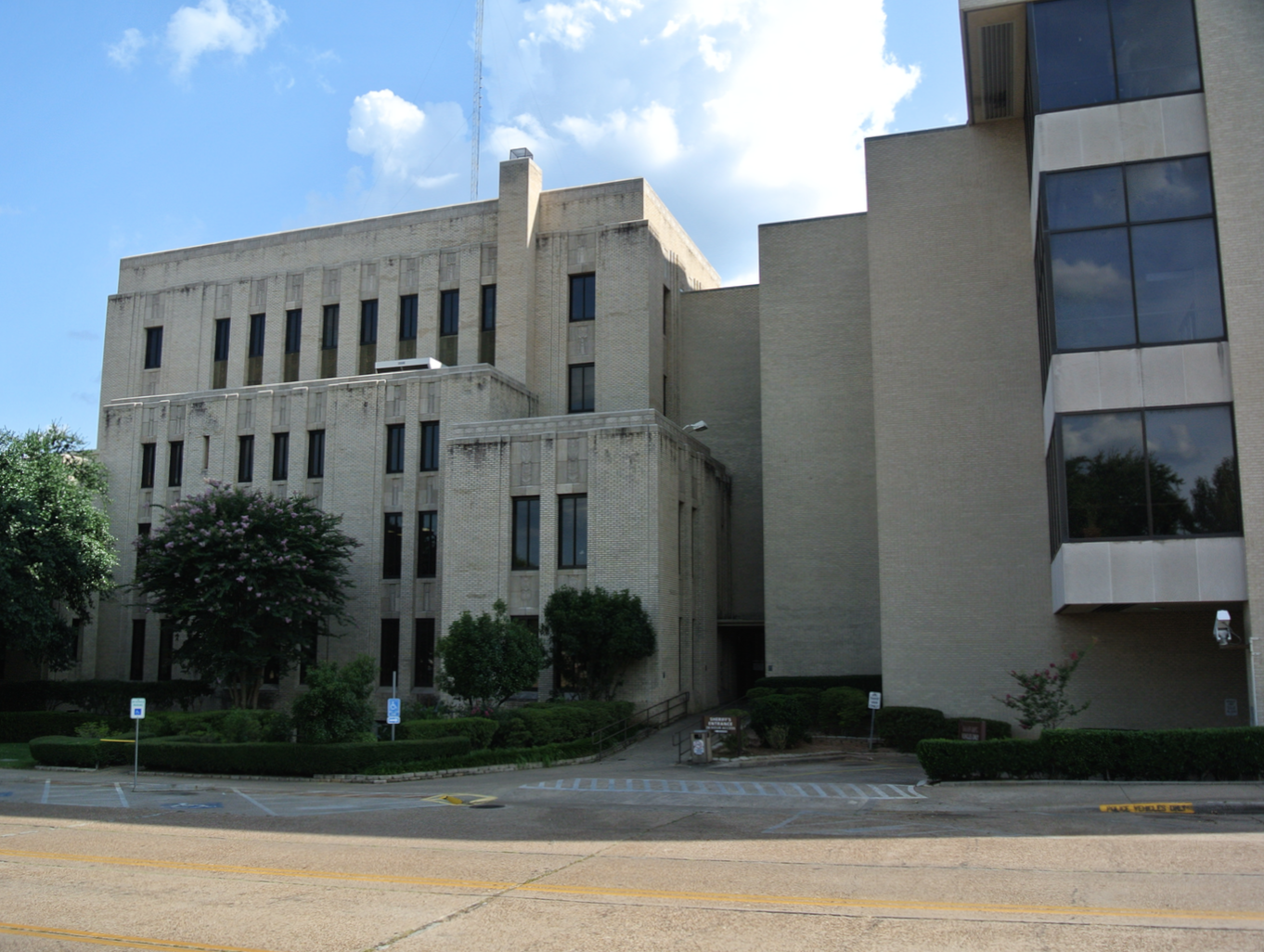 On this side of the annex, there are no windows and no doors. 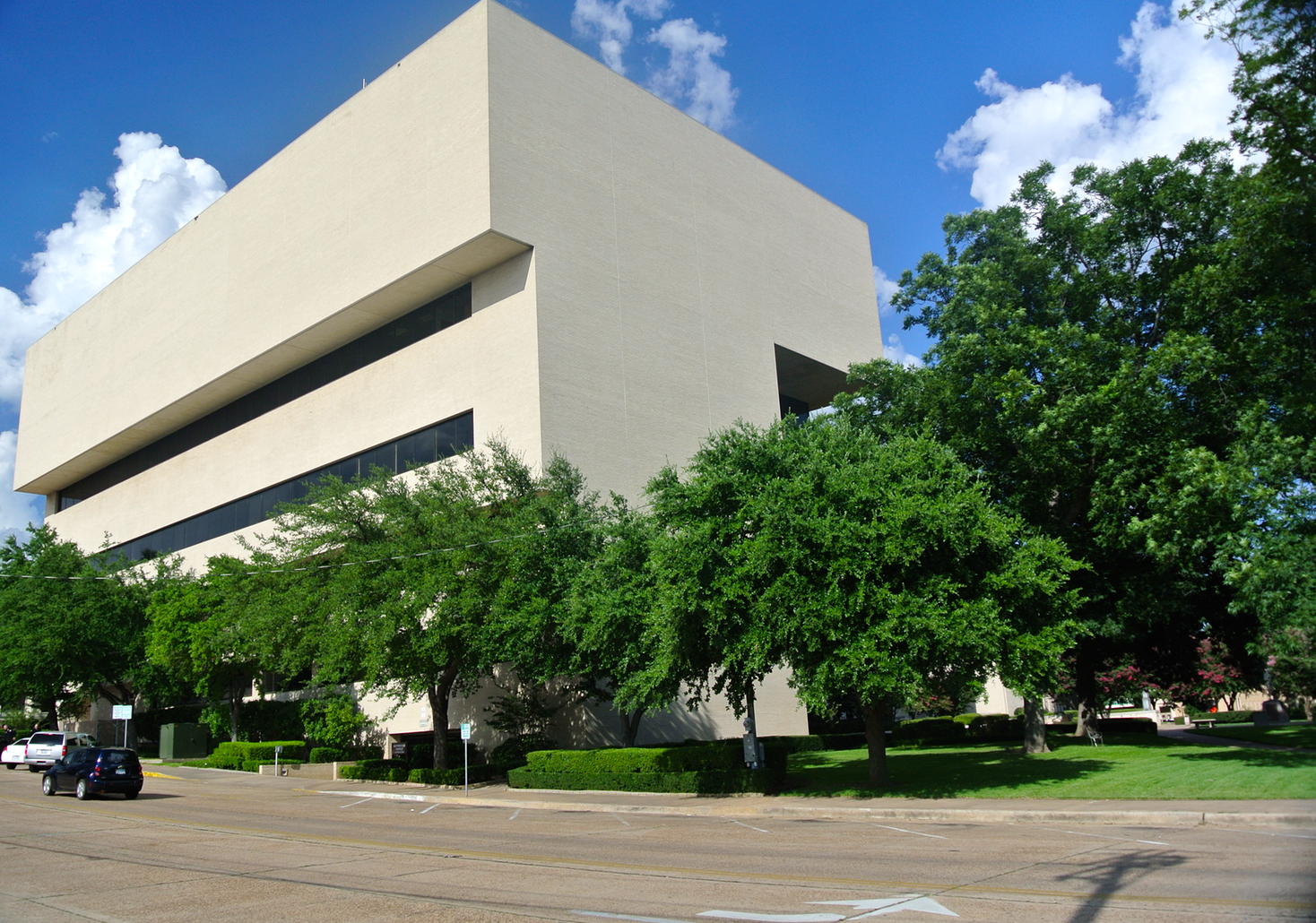 There are none on this side, either (only along the western and eastern façades). 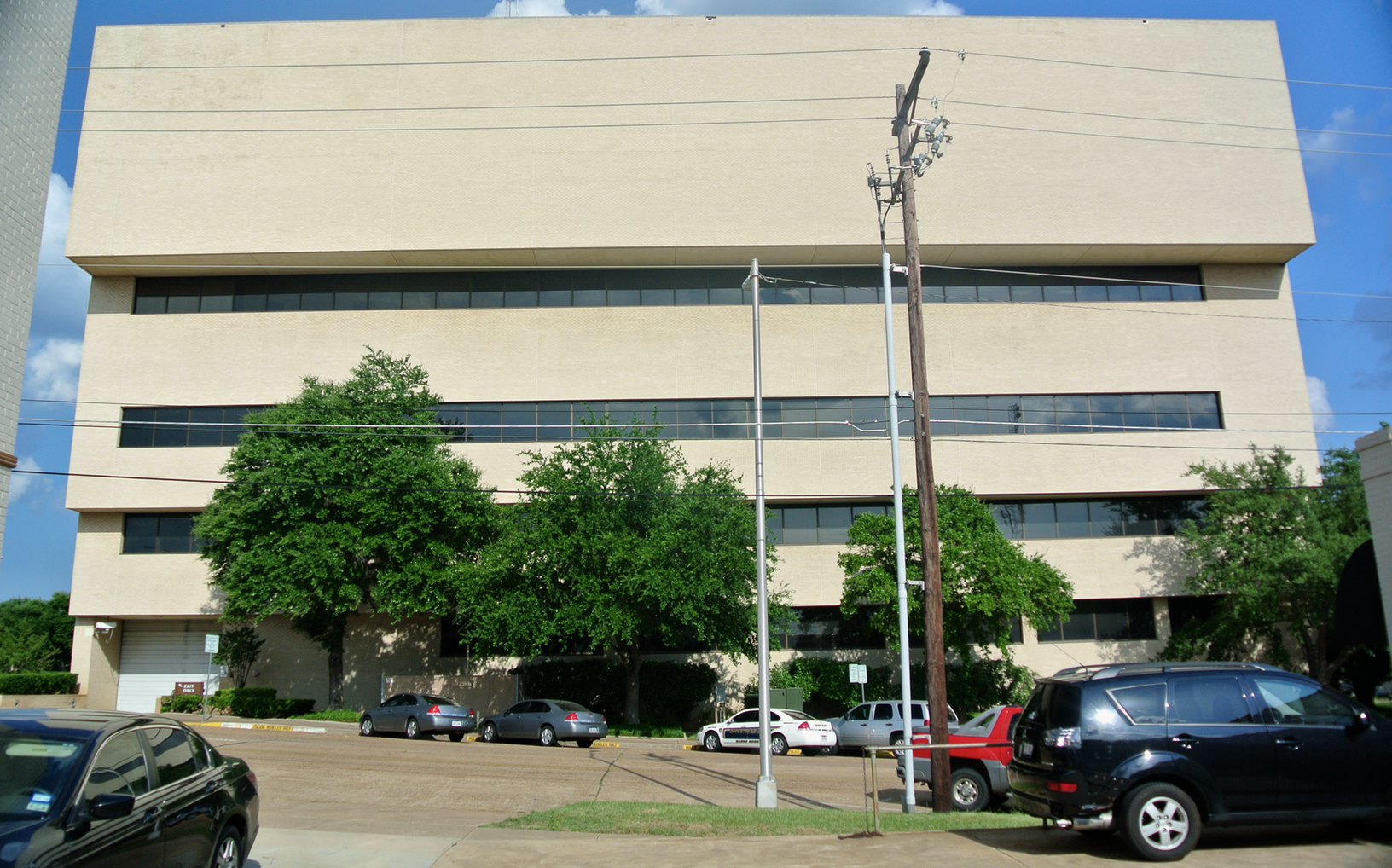 The western façade of the annex 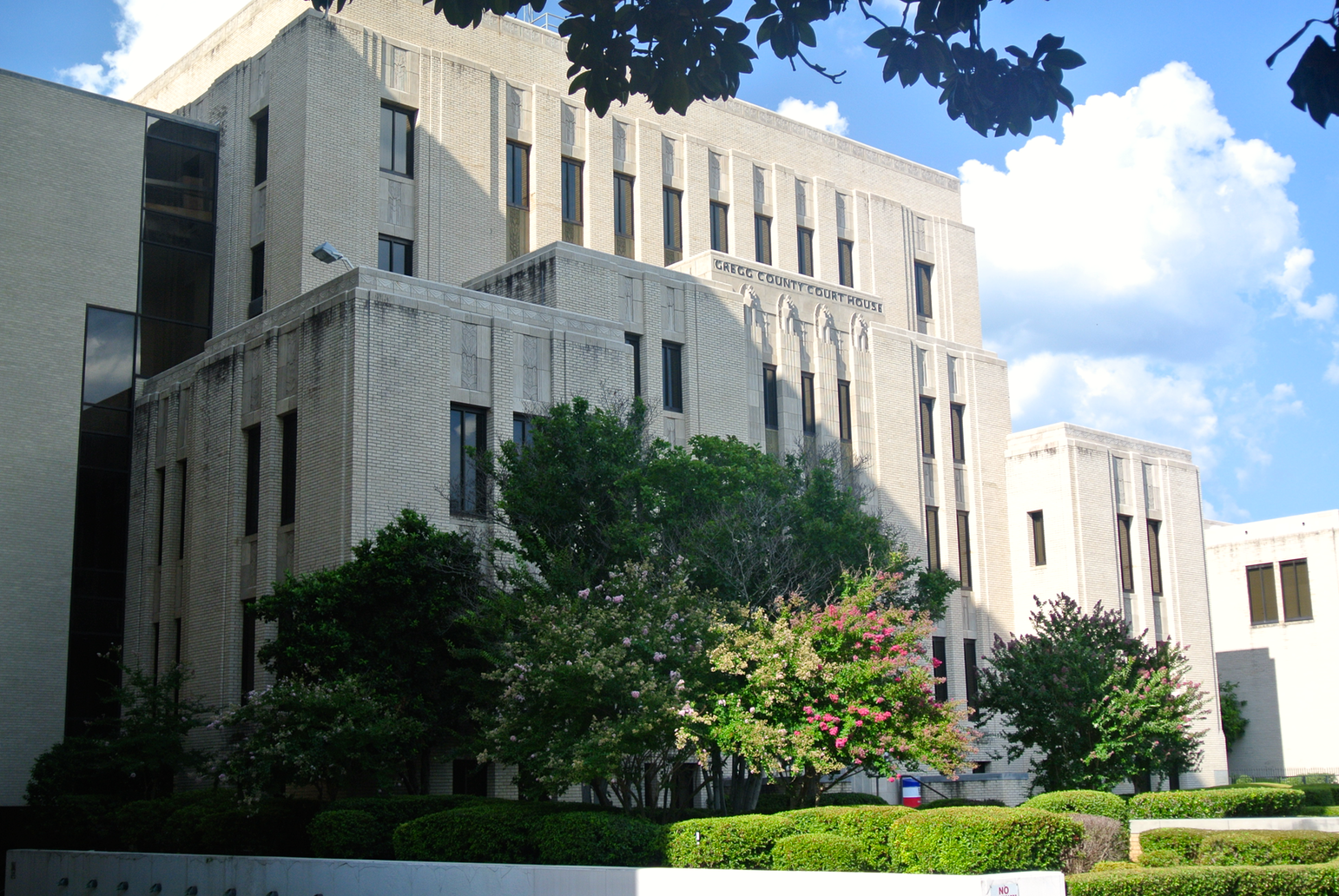 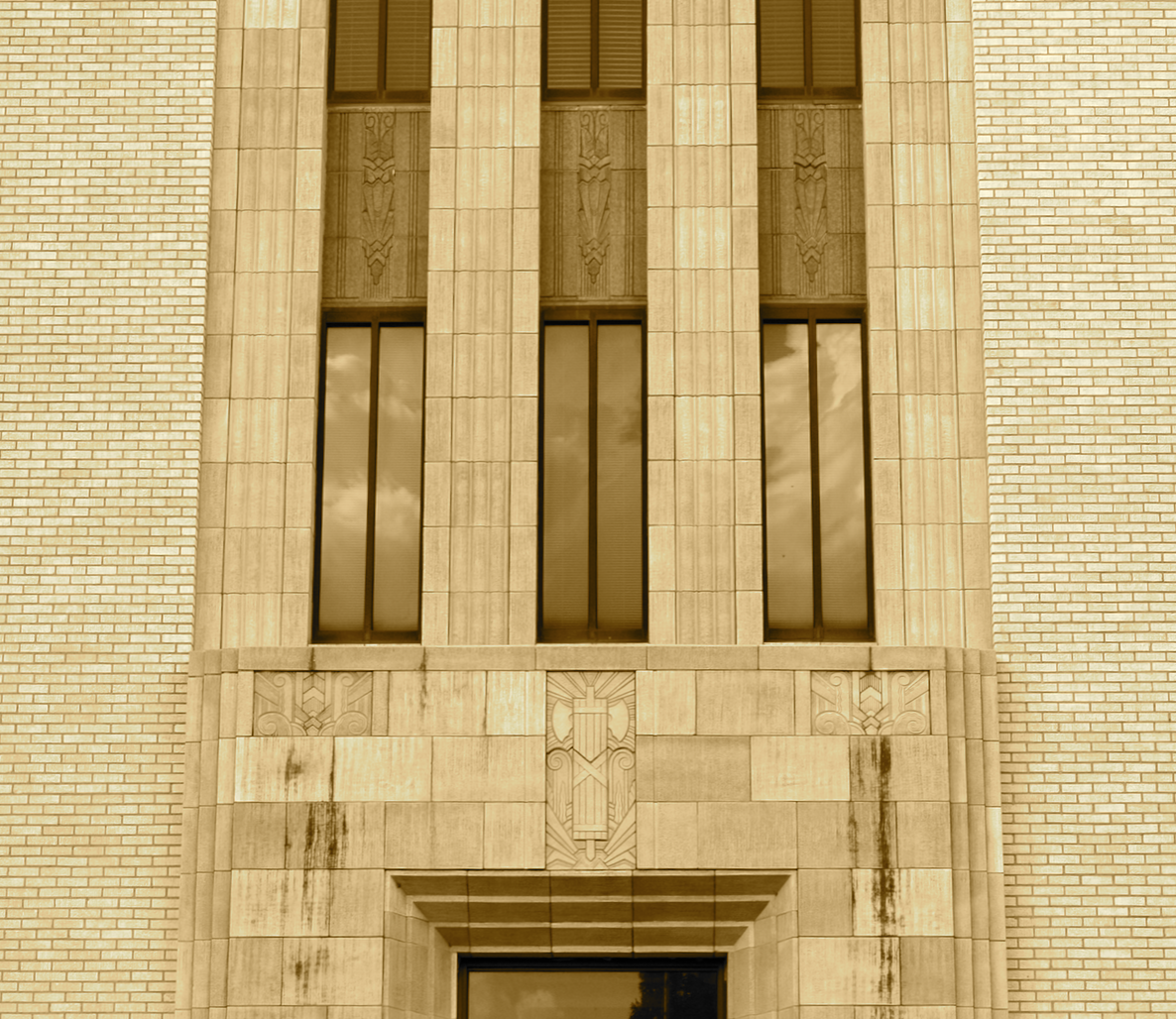 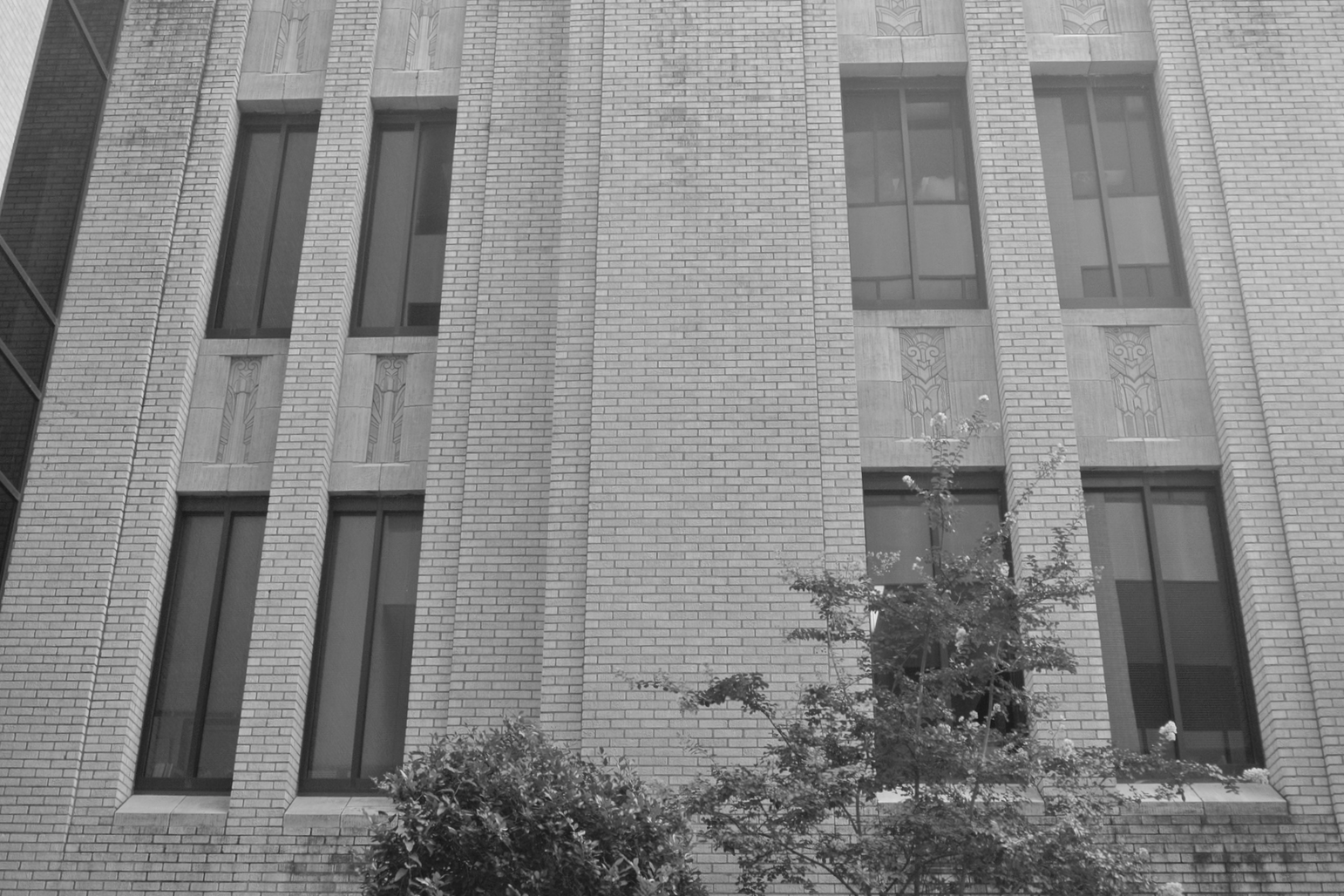 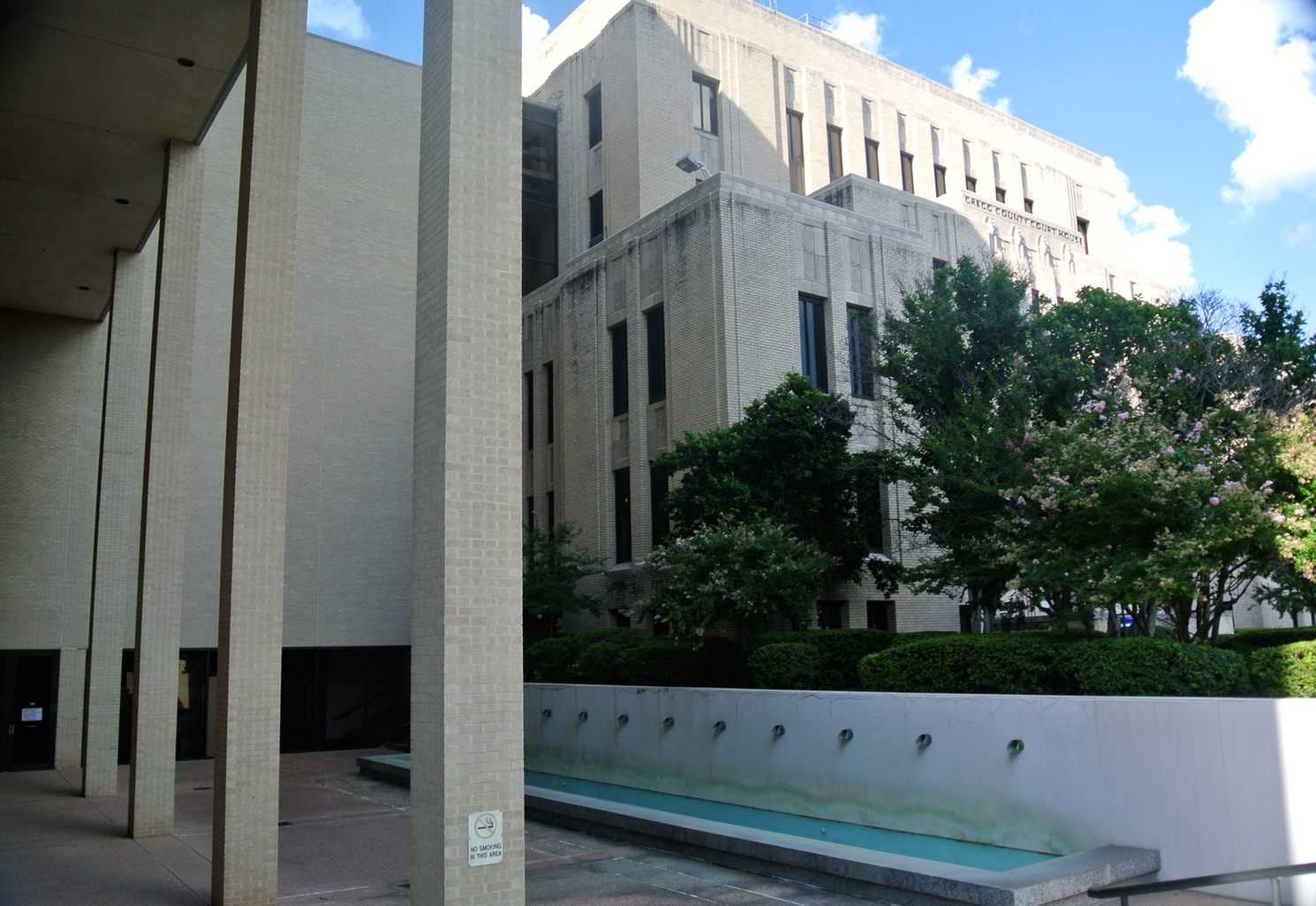 An empty fountain greeted me near the courtyard of the main entrance. 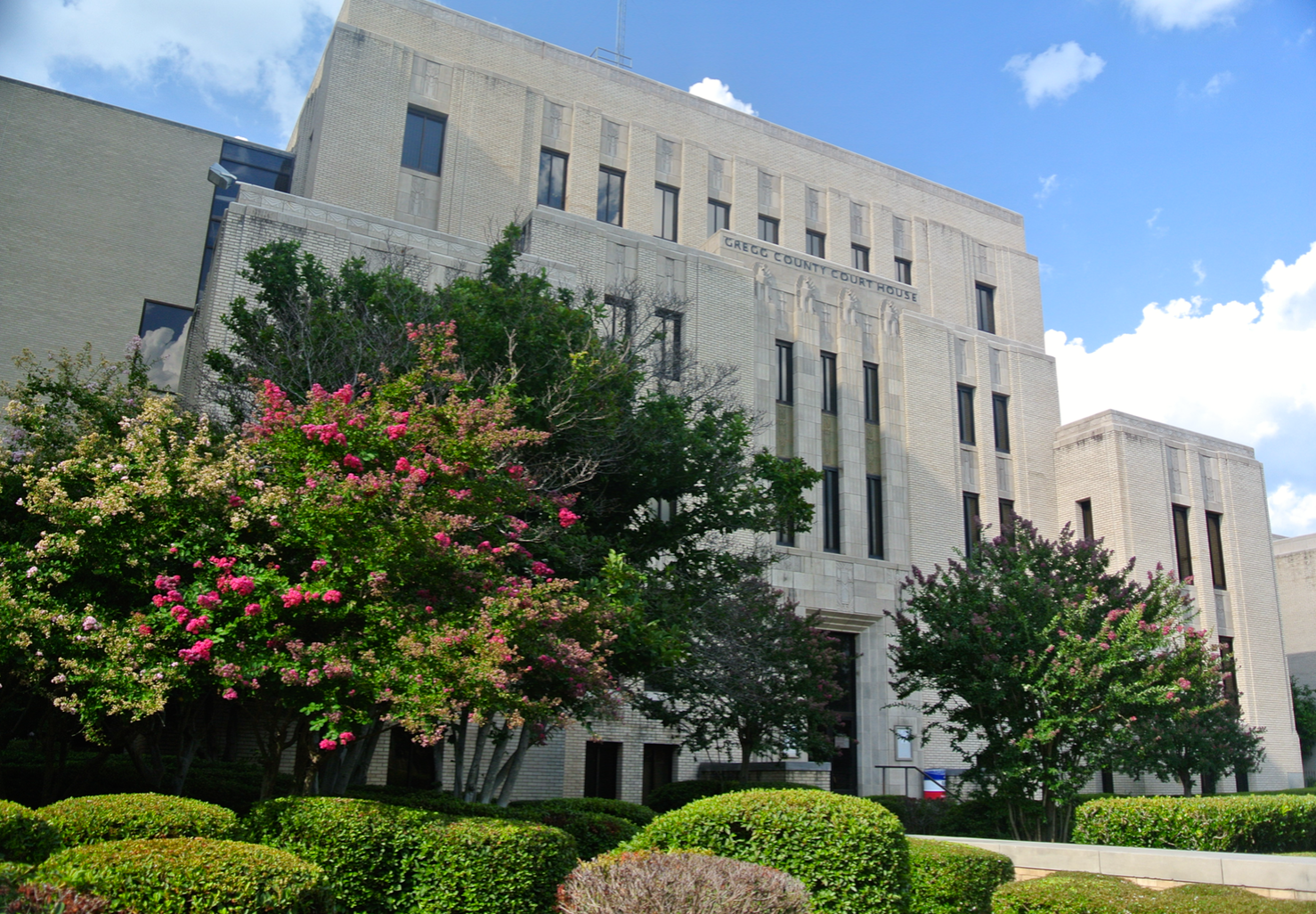 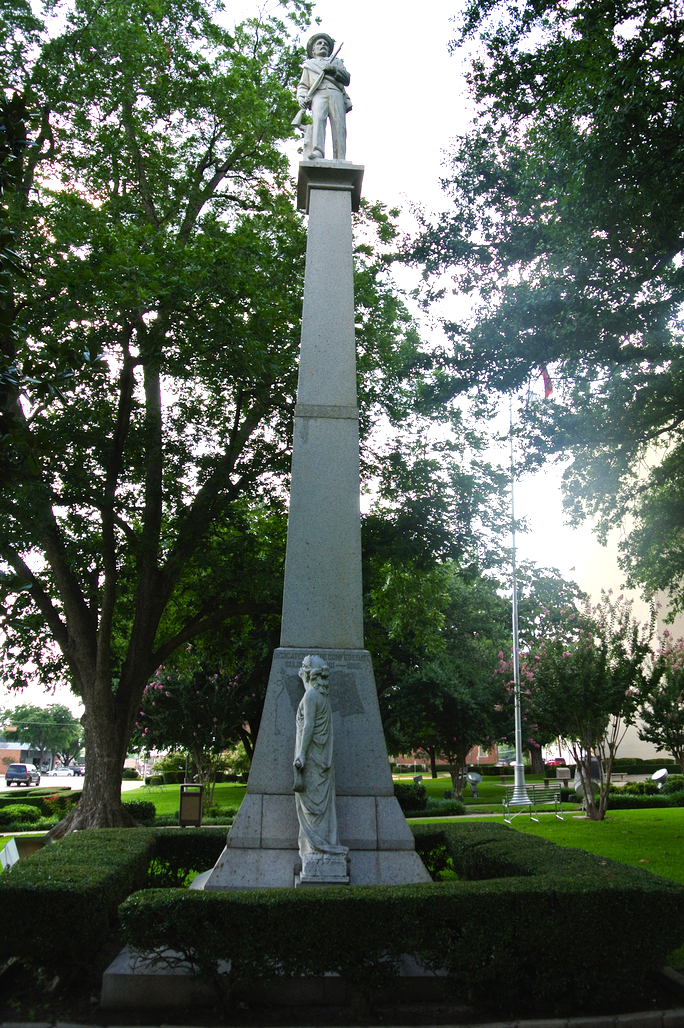 Just off the main entrance’s courtyard 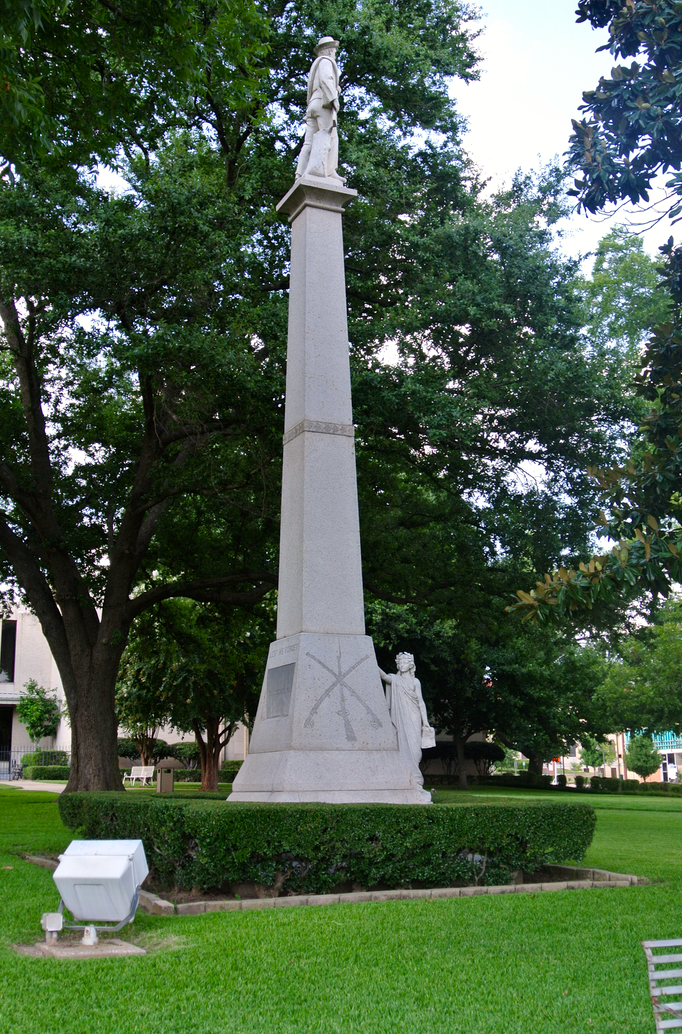 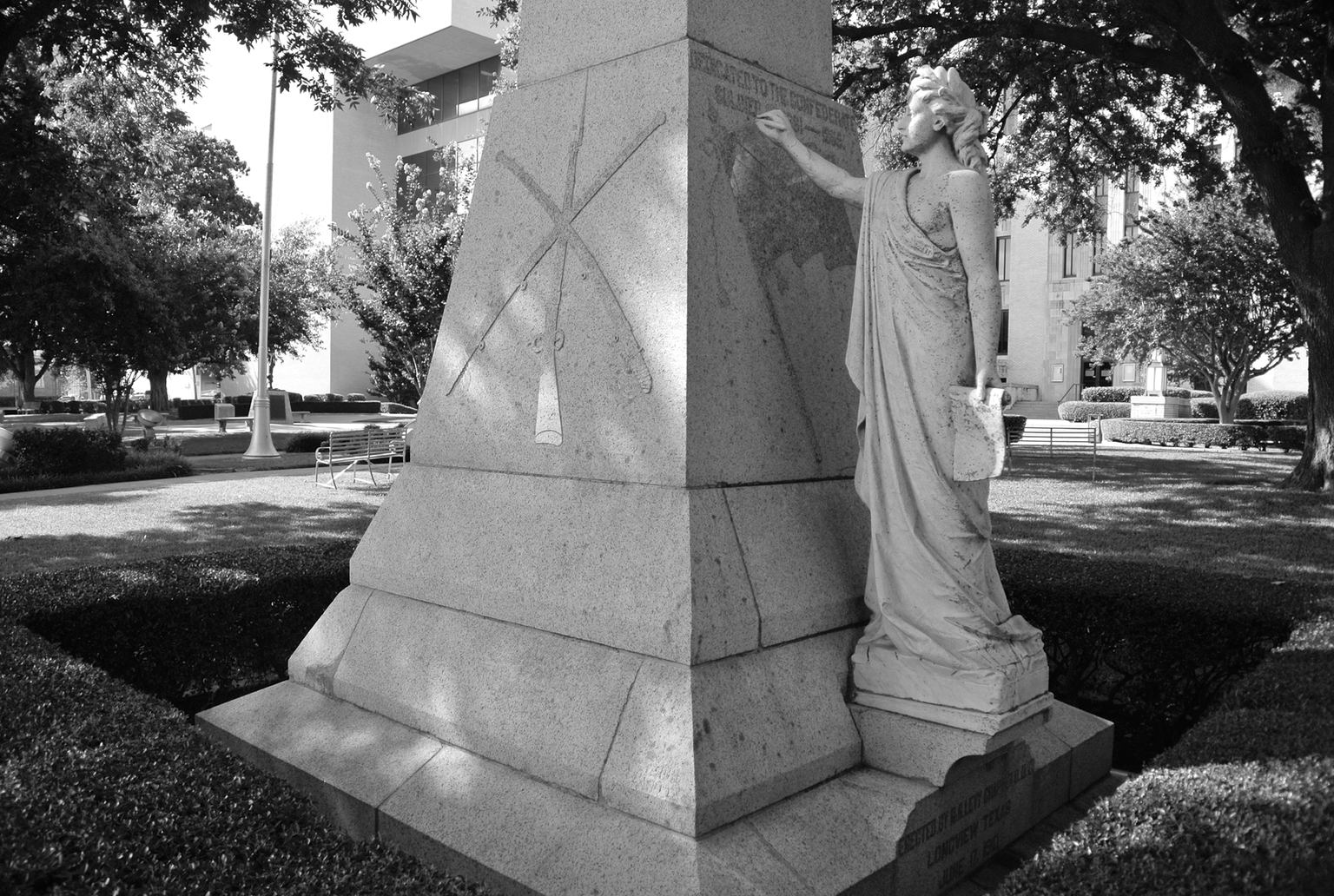