“Grimes County covers 799 square miles at the boundary between the Post Oak Belt and the Coastal Plain. Most of the area, especially the eastern sections, consists of gently rolling to sloping terrain, while the bottomland along the rivers and streams is nearly level to gently sloping.” 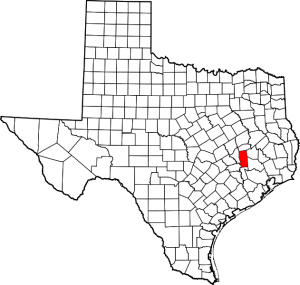 “Anglo settlement began with the founding of Stephen F. Austin‘s colony between the lower Brazos and Colorado rivers. In 1821 Andrew Millican took up residence along Holland Creek west of what is now Anderson. By the end of 1824 seven of Austin’s original colonists (the so-called Old Three Hundred) had claimed land within what is now Grimes County.”

“It became part of Montgomery County, which was organized by the Congress of the Republic of Texas in 1837. On April 6, 1846, the first state legislature accepted the petition of local residents and established Grimes County, named in honor of Jesse Grimes, a signer of the Texas Declaration of Independence who was then representing the area in the state Senate.”

“A vigorously contested election later in the year resulted in the designation of Anderson-recently platted in the center of the county-as the seat of government. In 1853 Madison County was carved out of northern Grimes County, which assumed its present boundaries in 1873, when Waller County was formed from territory in its southern extremity.”

“With 505 slaveholders, Grimes was one of only seventeen counties in the state in which the average number of slaves per slaveholder was greater than ten.”

”There was virtually no voice in Grimes County raised in opposition to the secessionist movement during the crisis of 1860 and 1861. The referendum of February 1861 returned a majority of 907 to 9 in favor of secession. Hundreds of county residents volunteered for service in Confederate and state military units.”

“Reports filed by the subassistant commissioner describe a general breakdown of law and order in Grimes and surrounding counties and make clear that though considerable violence was perpetrated by whites against whites, blacks against blacks, and blacks against whites, most of the violent crime in this period was committed by whites against blacks. Twenty-nine such incidents, including twelve homicides, were reported in the county in 1867 alone.”

“The authorities seemed helpless to administer the laws, and few offenders were ever prosecuted. As the anarchy deepened, armed bands of whites meted out vigilante justice; the Ku Klux Klan emerged in the county at Navasota in April 1868. In self-defense, local blacks formed their own “militias.” The secret activities of the county’s Loyal Leagues (see UNION LEAGUE), organized among the freedmen by Republicans as an agency of political indoctrination, inflamed white fears of black conspiracies against white lives and property.”

“Agricultural revival and transportation improvements helped attract a modest level of migration to the county in the late 1800s.”

“Years of prolonged vigilantism and lawlessness in the early 1900s earned Grimes County a “rough” reputation, which was only enhanced by the local reemergence of the Ku Klux Klan in the 1920s. In 1908 Navasota hired noted Texas Ranger Frank Hamer as its sheriff in an effort to “clean up” the town. Another-largely ineffectual-attempt to curb the violence was made in November 1905, when the county voted itself dry in a local-option election.”

“Agriculture has continued to be the preeminent economic activity in Grimes County but has undergone several transformations in the twentieth century. The problems of overproduction and falling prices during the Great Depression reduced cotton acreage in the county by 53 percent between 1930 and 1940, to 38,726 acres; the 1940 yield of 16,031 bales was little more than half of that of 1900.”

“Grimes County provides numerous opportunities for hunting and fishing. Visitors are attracted to the area by its numerous historic sites and homes, as well the annual Renaissance Festival held in October and the Nostalgic Days celebration held each May.”

The Grimes County Grand Jury indicted Clyde Barrow (Bonnie and Clyde) in 1933 after a bank robbery in Navasota. The charge was dropped after Bonnie and Clyde were ambushed by lawmen in Louisiana in 1934. The trial would have most likely taken place in the Grimes County Courthouse. Though, one of his gang members, Joe Palmer was tried in this courthouse for the murder of Major Crowson of the Walls Prison Unit in Huntsville. He was found guilty and sentenced to death.

The only highway that passes through Anderson is Highway 90, which bypasses the courthouse. We had to get on a different road to drive to the historic building. 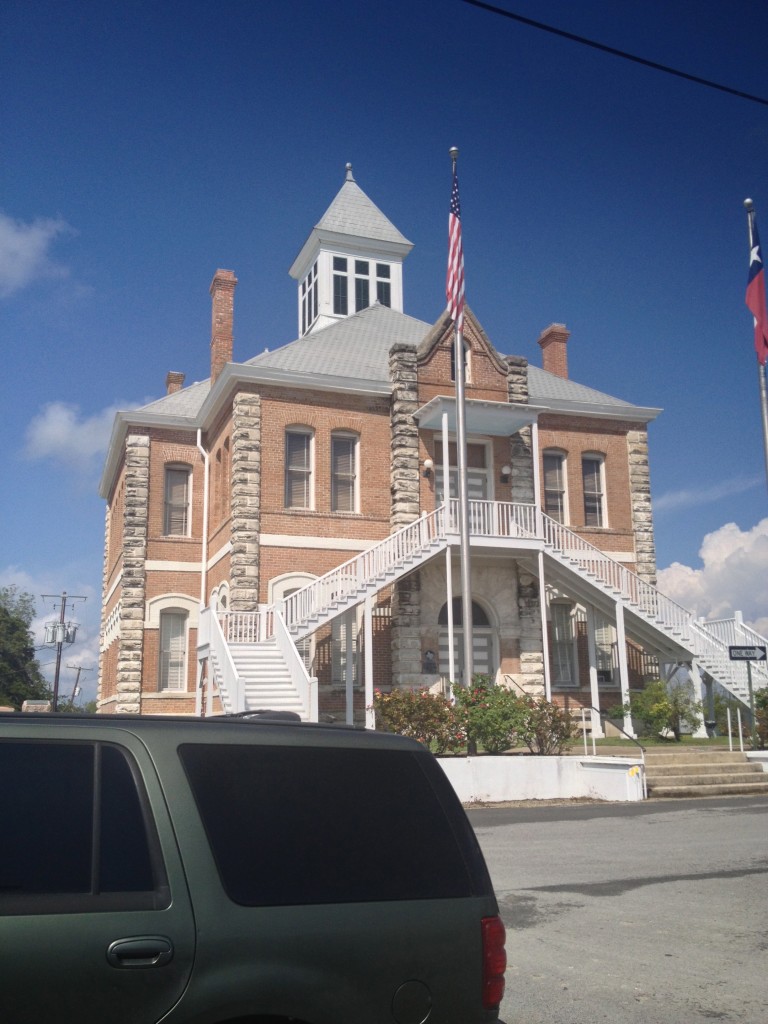 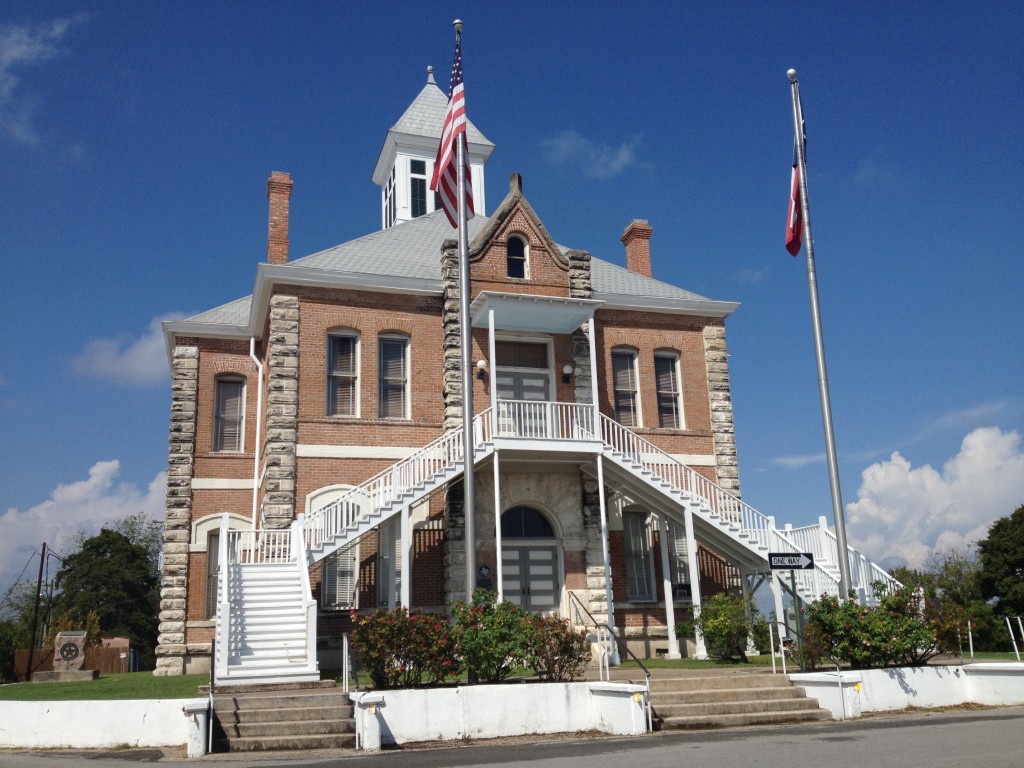 What makes this courthouse so unique is the exterior double staircase leading directly to the second floor courtroom. 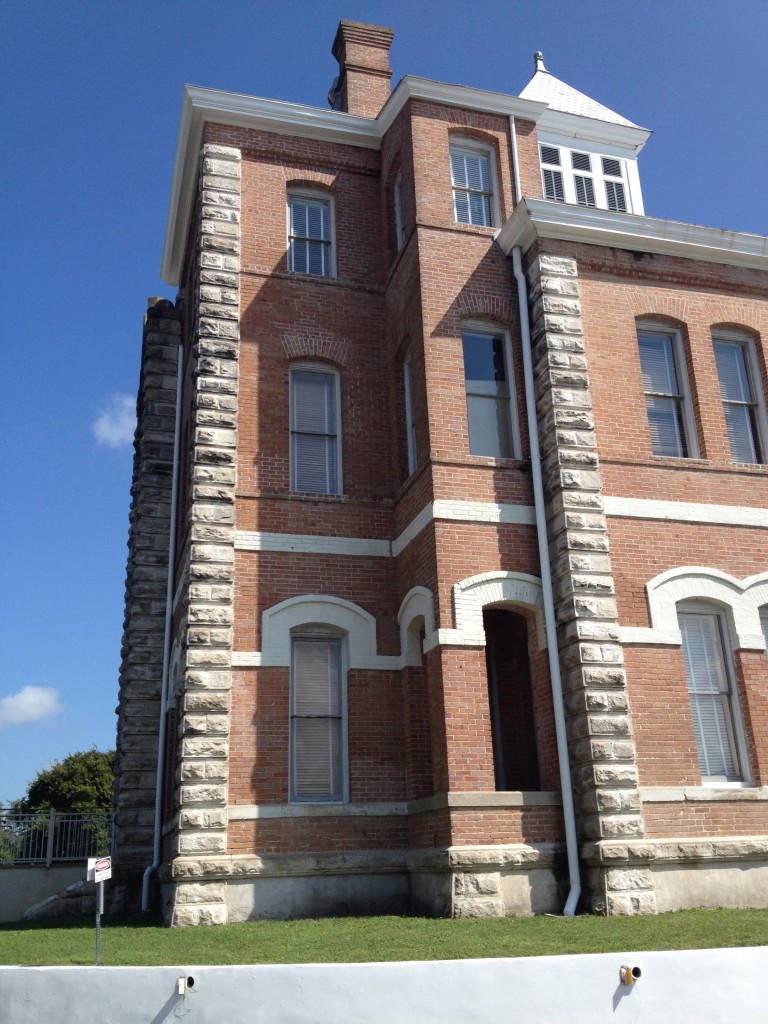 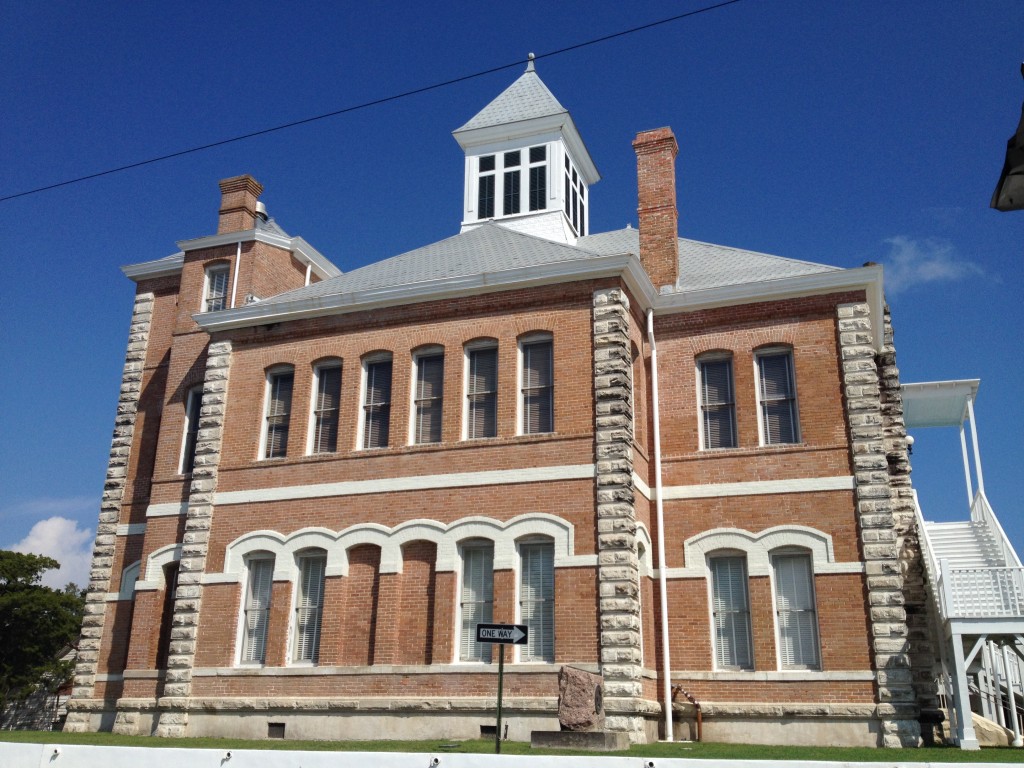 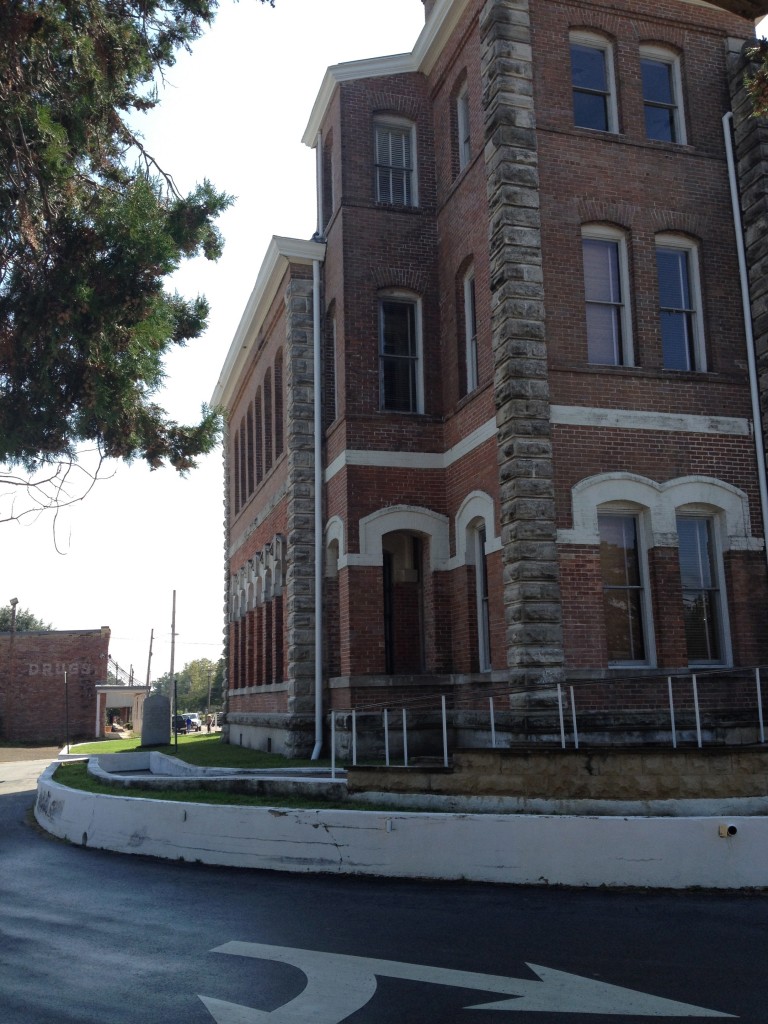 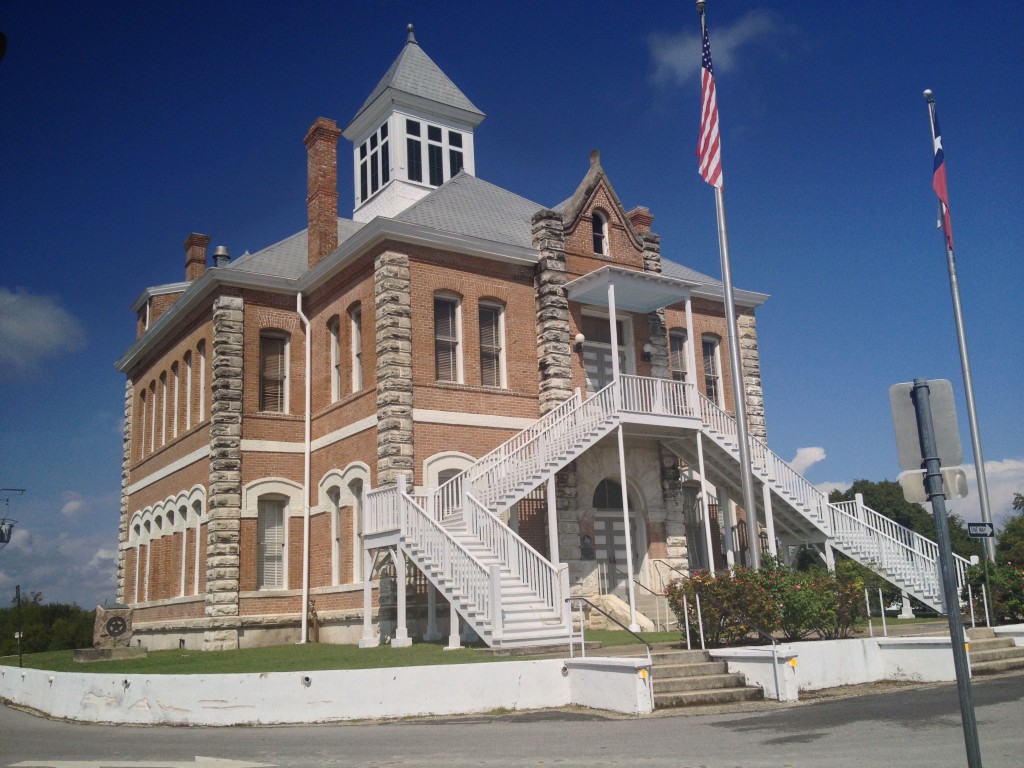 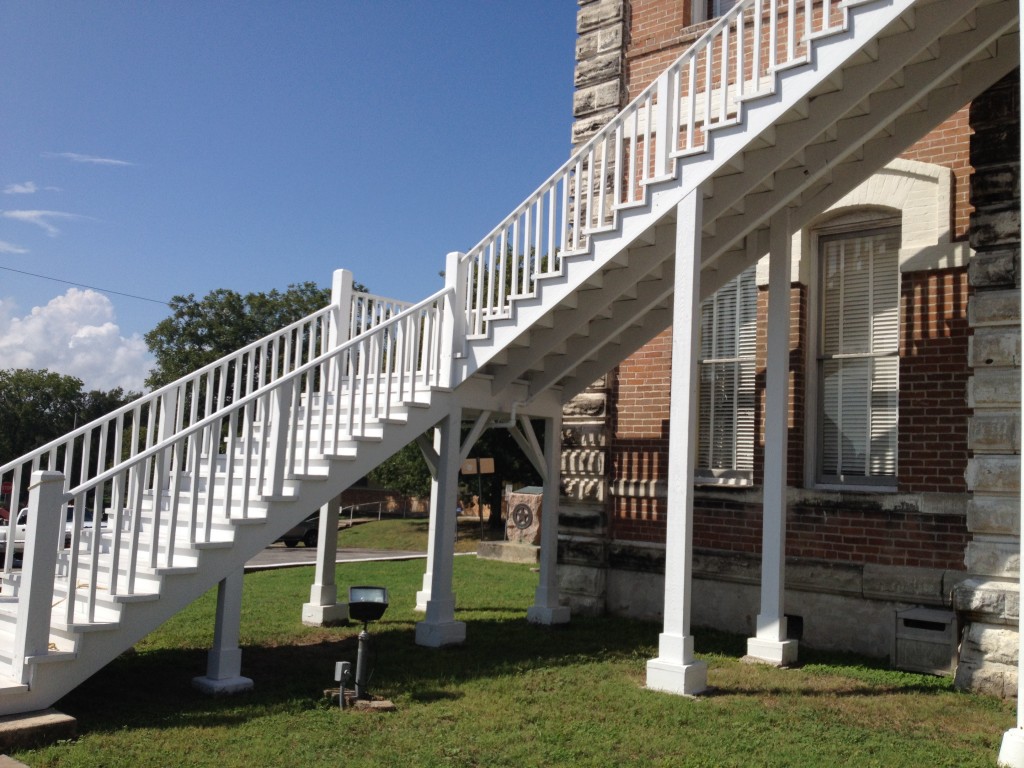 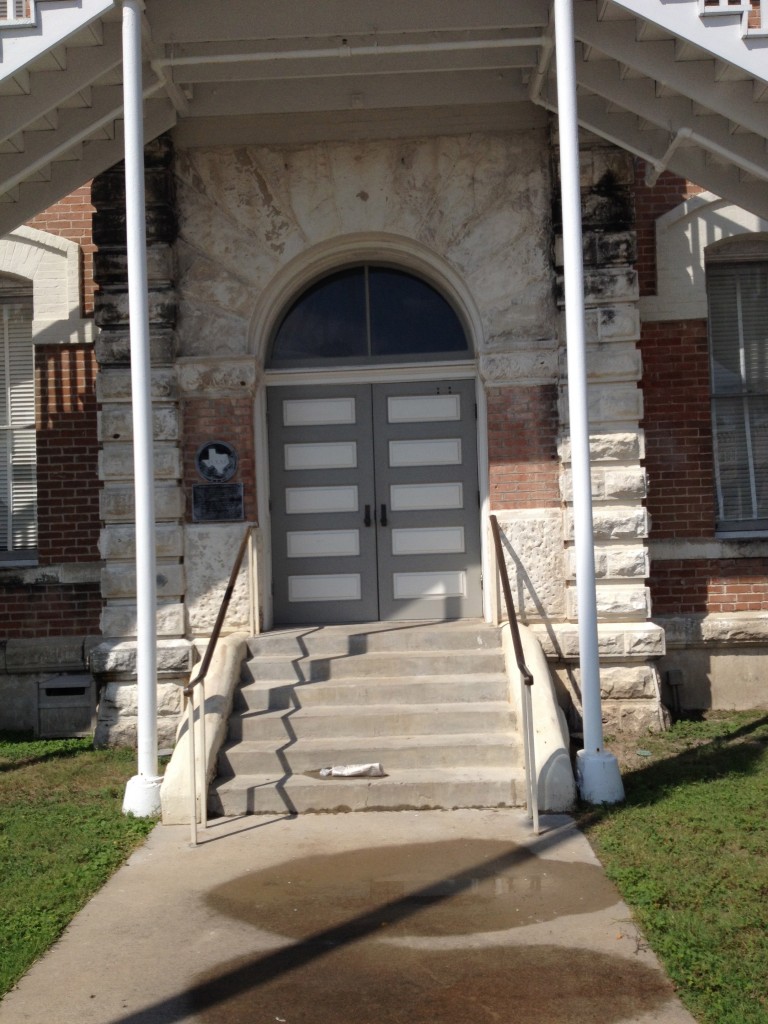 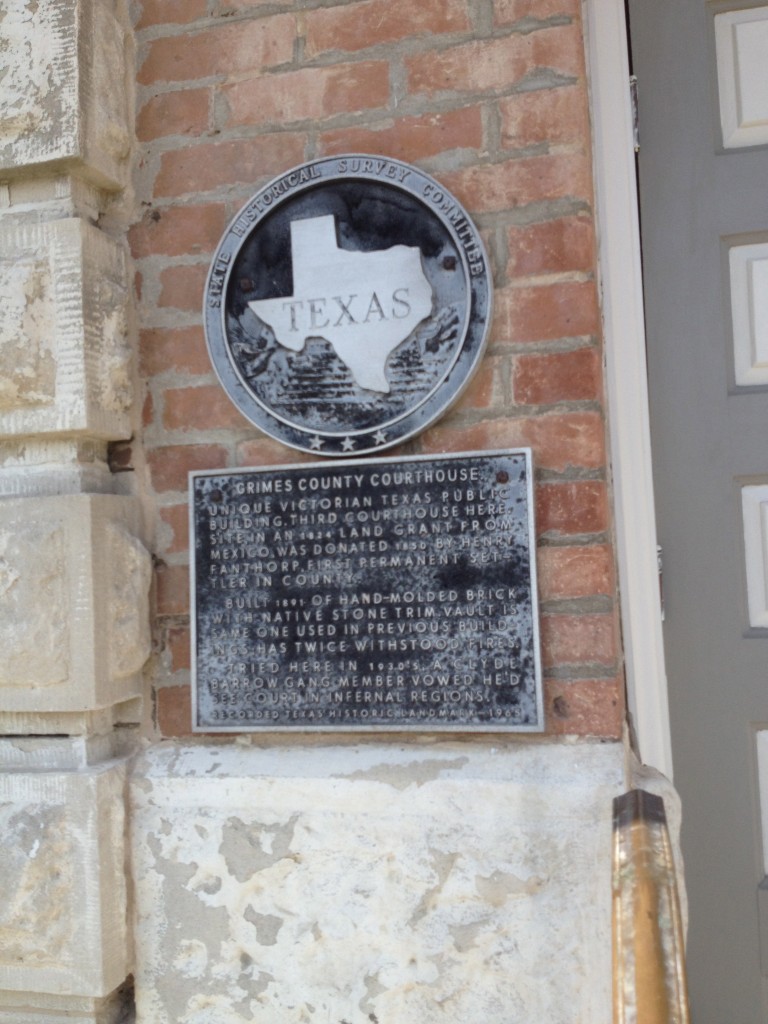 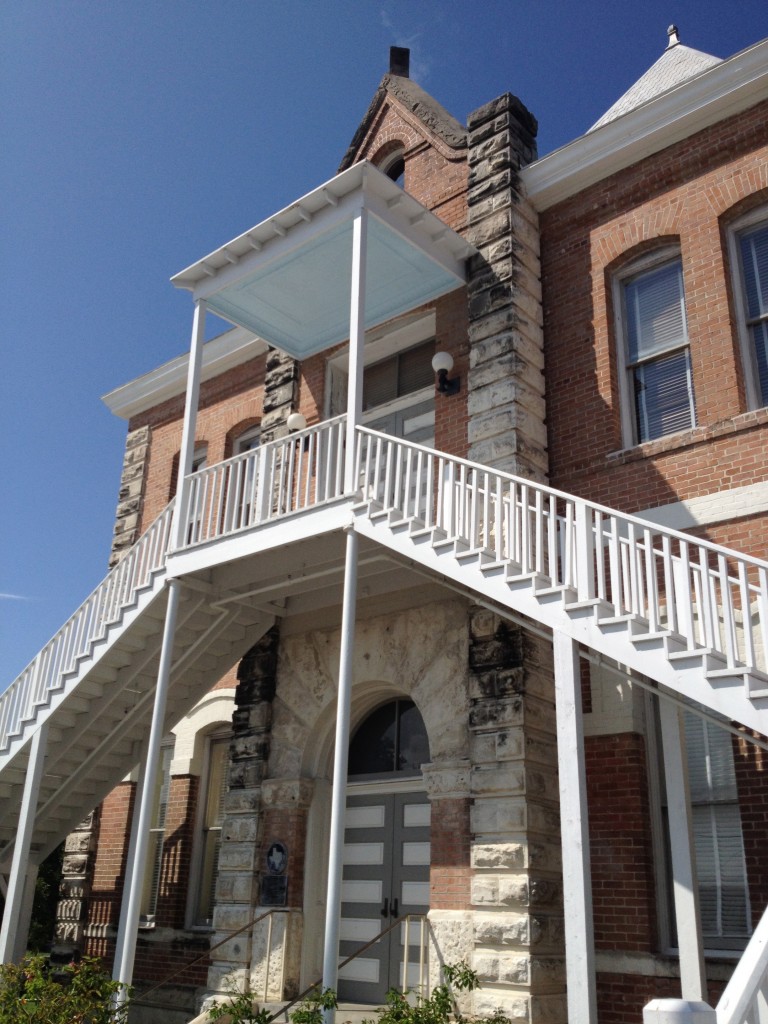 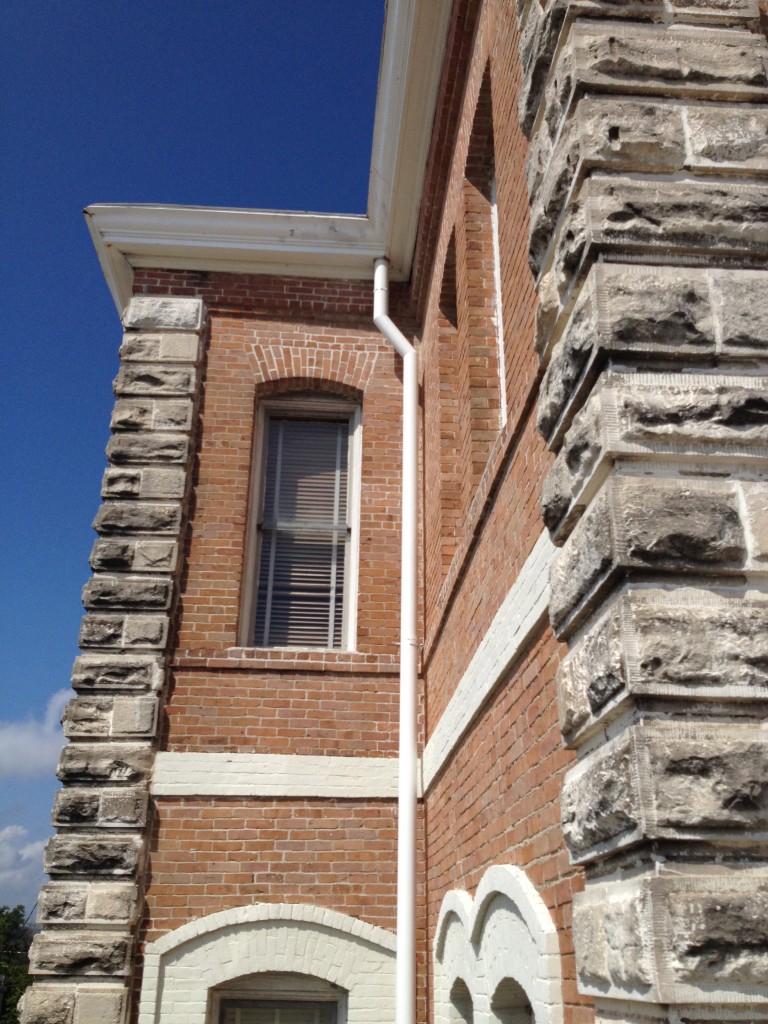 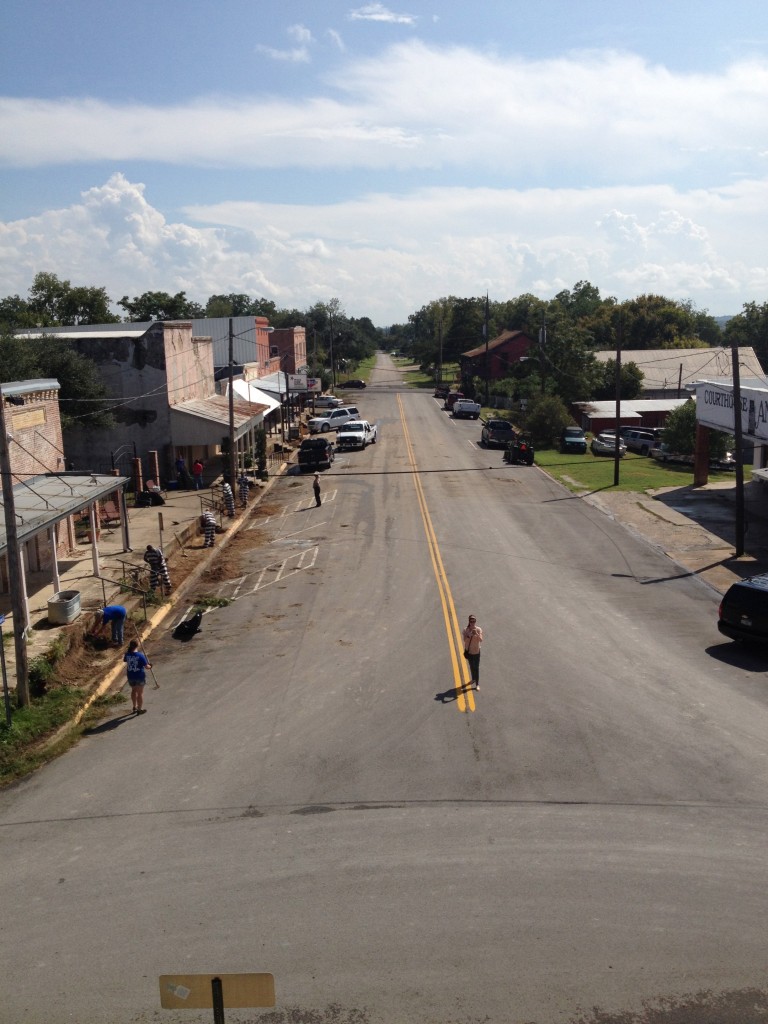 View from the top of the stairs; yes, you do see a sheriff and prisoners 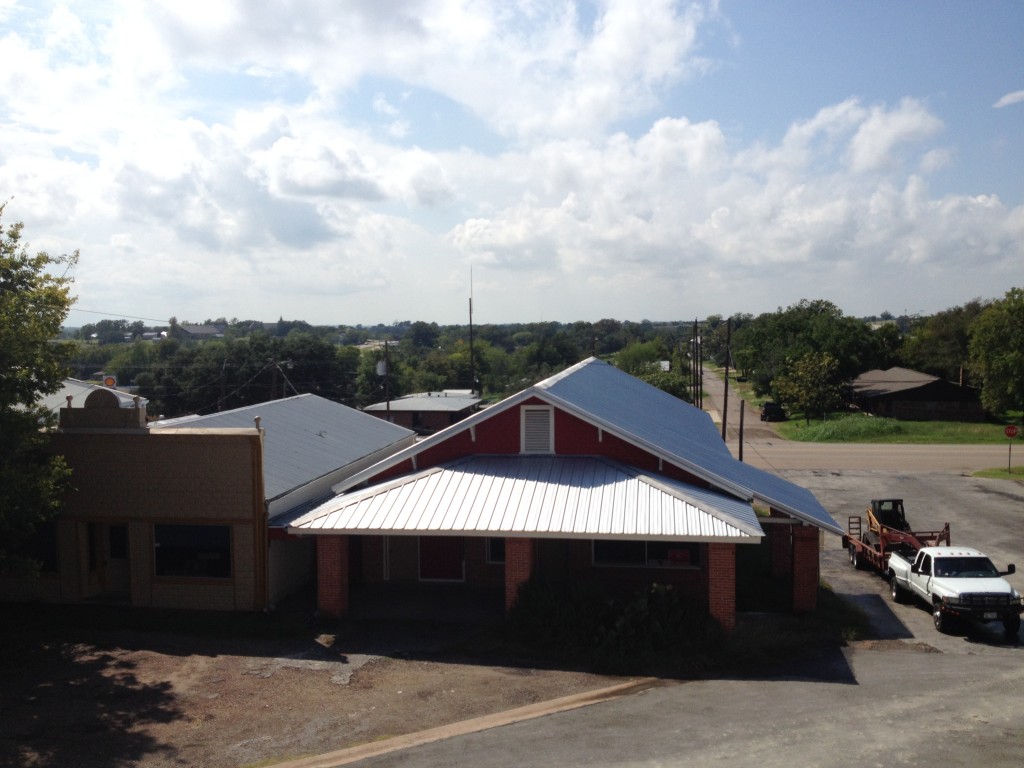 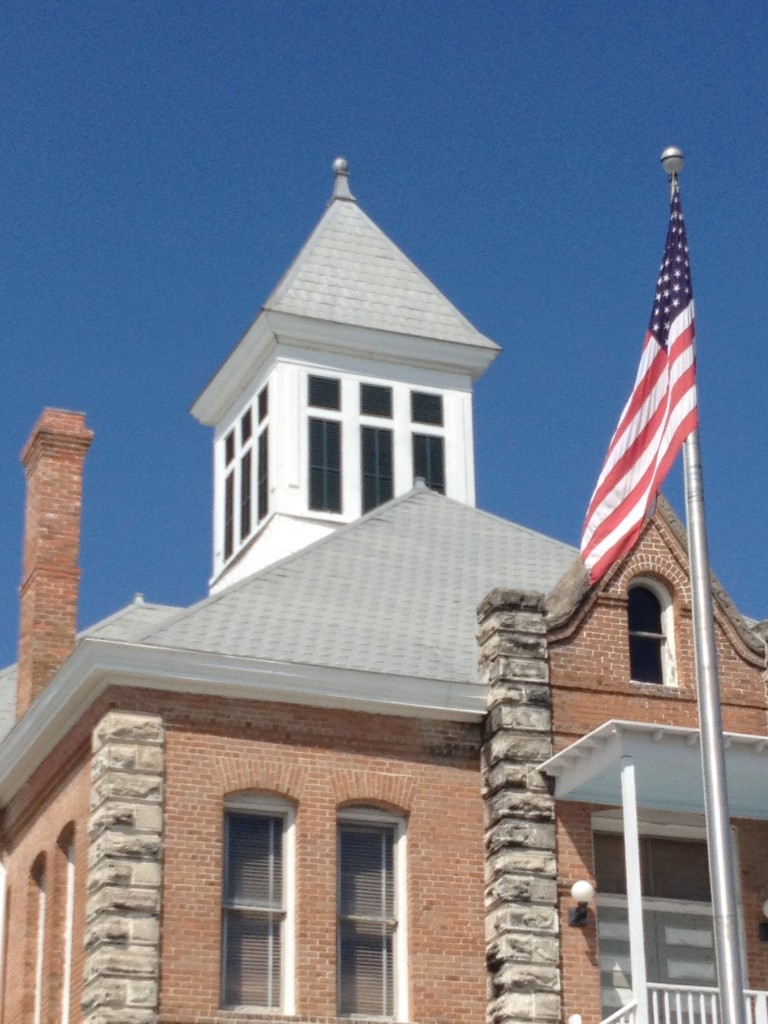 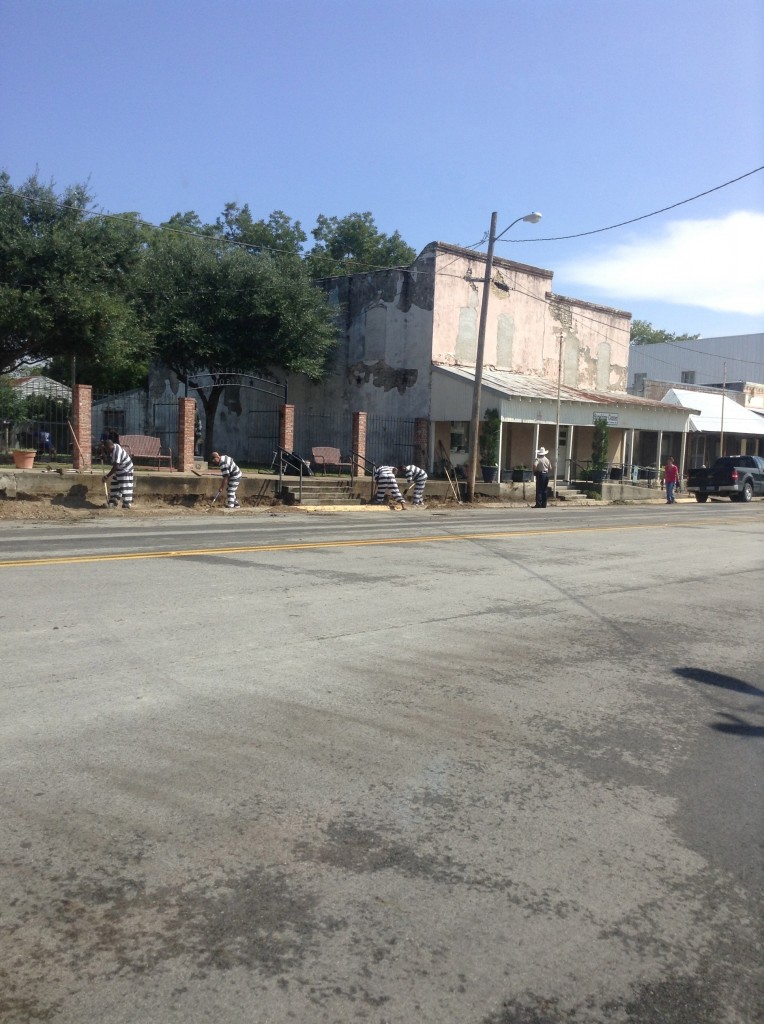 Imagine our surprise to seeing convicts right in front of the courthouse. The Justice System has not failed Grimes County! 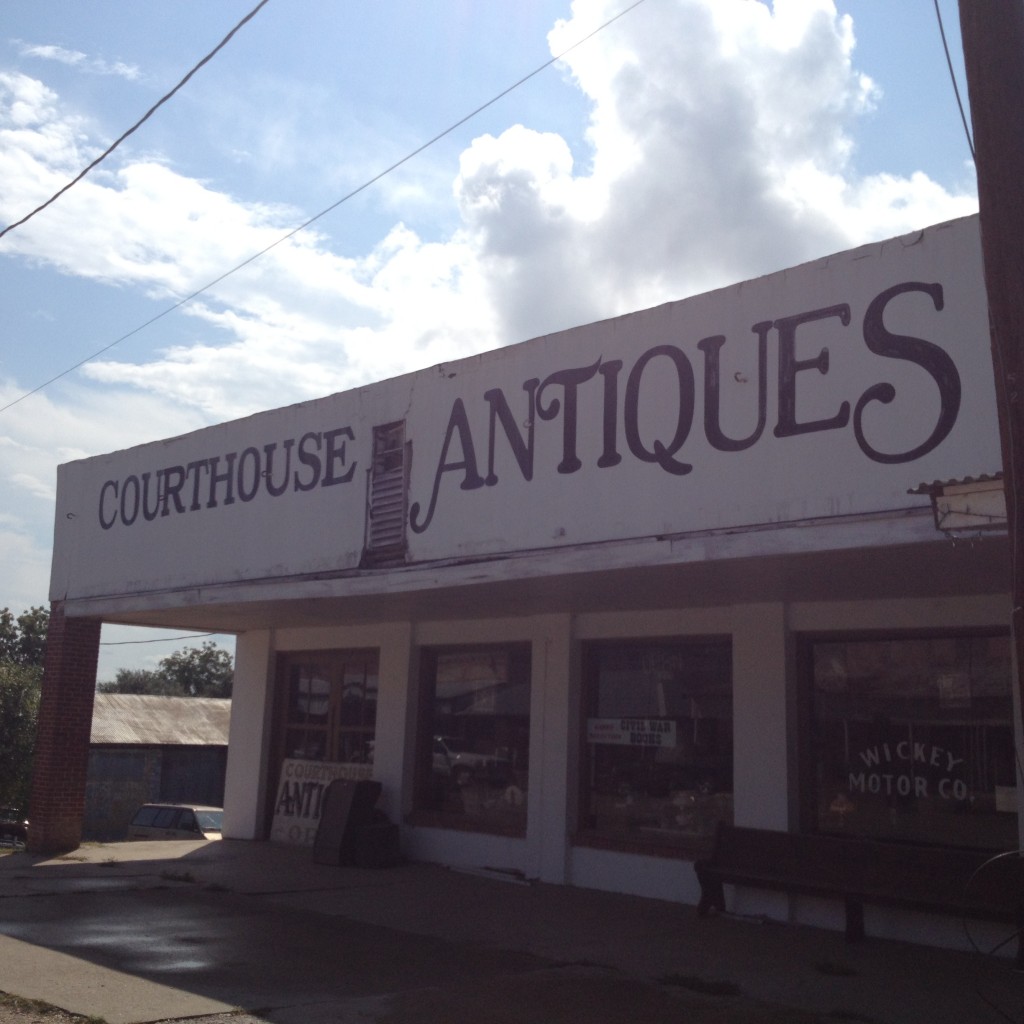 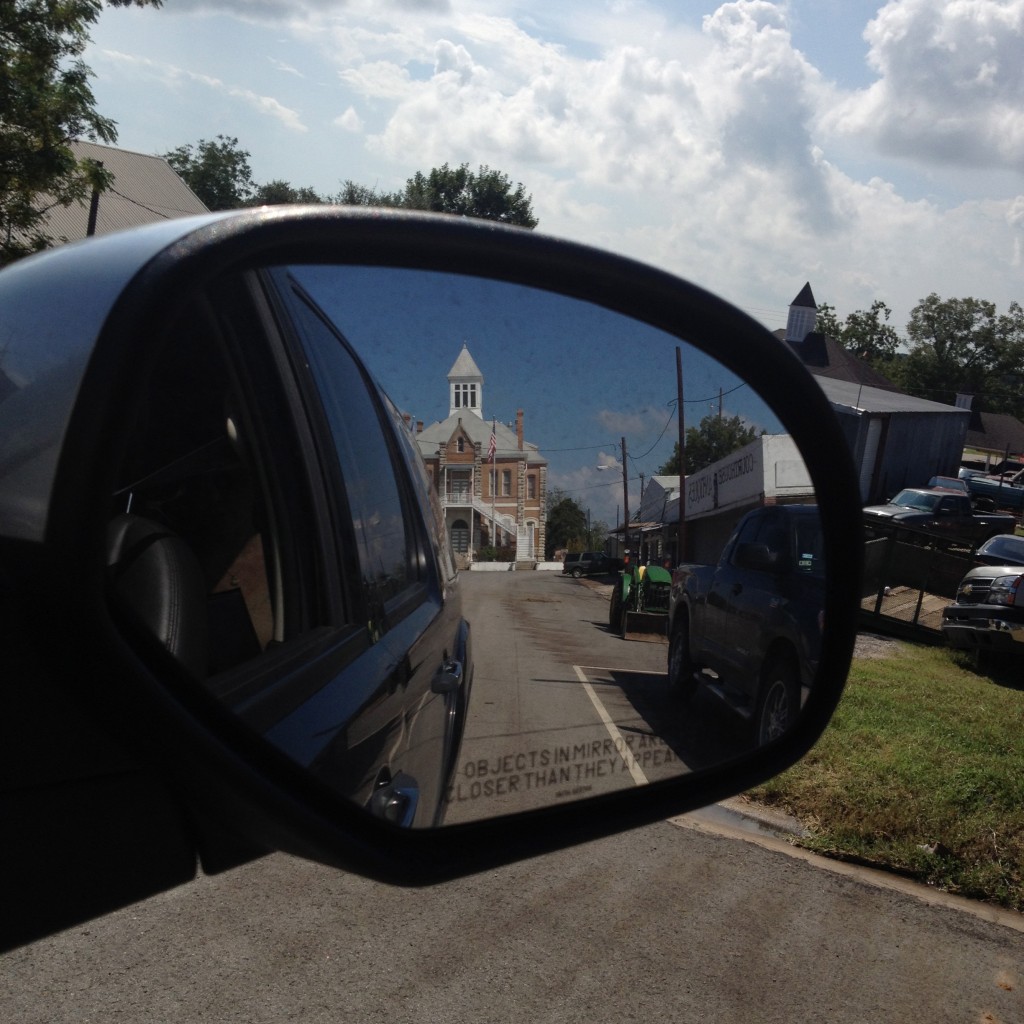 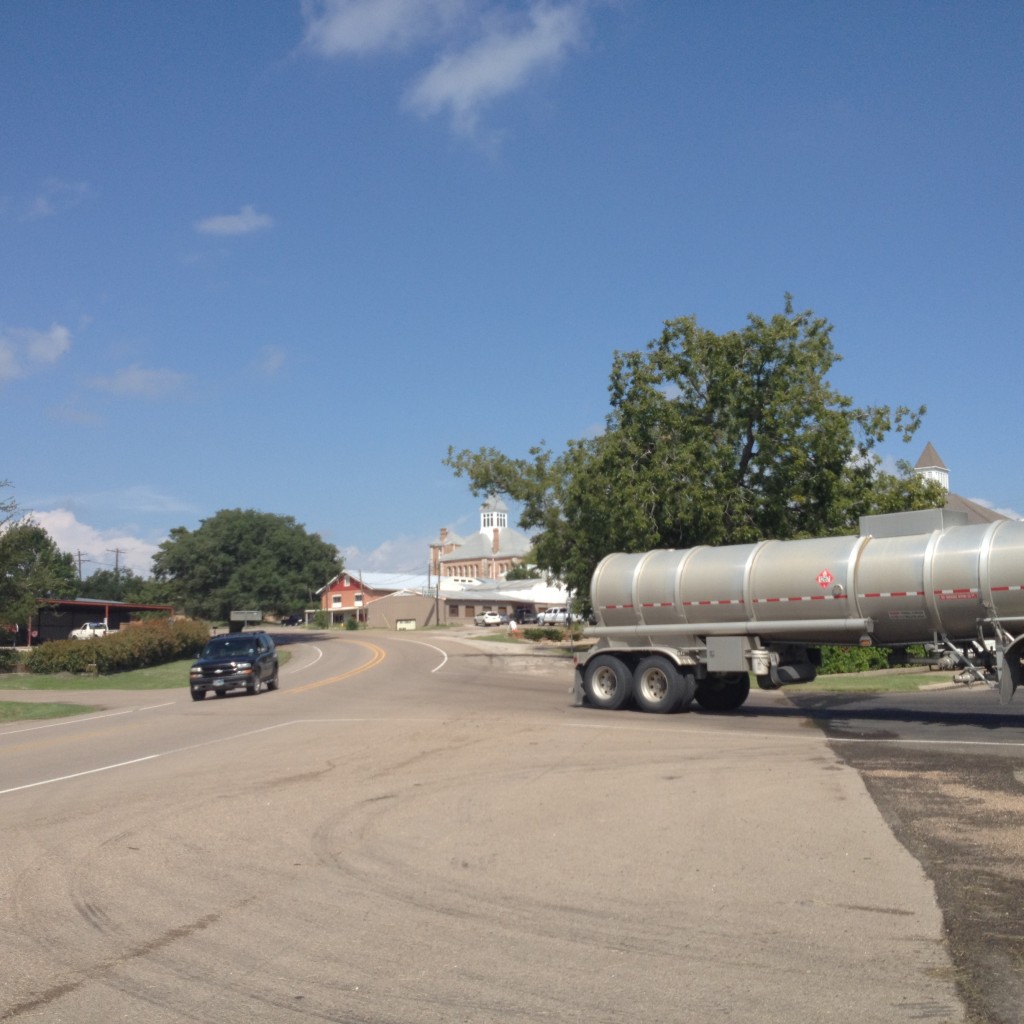