“The county was named for Rufus K. and Oliver C. Hartley. It comprises 1,488 square miles of level to rolling grasslands. The terrain is marked by jagged, dry arroyos and by the intermittent Punta de Agua and Rita Blanca creeks, which join in Hartley County and drain into the Canadian River in Oldham County. The elevation ranges between 3,400 and 4,200 feet above sea level.”

“Until the frontier reached the Hartley County region in the 1870s, the area was just a small part of the huge, vacant High Plains, which stretch from Texas to Canada. An Apachean culture occupied the Panhandle-Plains area in prehistoric times; the modern Apaches emerged then but were pushed out of the region about 1700 by the Comanches, who ruled the area until they were defeated in the Red River War of 1873–74 and subsequently removed to Indian Territory.”

“In 1876 the Texas legislature marked off Hartley County from land formerly assigned to Bexar and Young counties. Due to its proximity to both the Canadian River and New Mexico, Hartley County undoubtedly witnessed the comings and goings of Comancheros, ciboleros, and pastores as they ventured eastward from New Mexico into Comanchería on the Great Plains. The pastores, in fact, continued to migrate yearly after the Indian era and made up a large part of the regional population and economy into the early 1880s.” 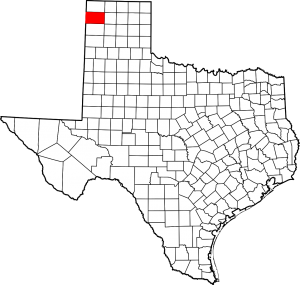 “With the Indians removed, cowmen entered the region, and in the late 1870s and 1880s Hartley County changed from raw frontier into the domain of the established rancher. The county quickly became a part of the huge ranching industry that developed in Northwest Texas after the Civil War. Between 1876 and the 1890s many well-known Panhandle ranches blossomed on Hartley County soil. The famous XIT Ranch was formed along the western border of the Panhandle in 1882 and occupied the western third and the southern third of Hartley County. Other ranches (including the LE Ranch, the LIT Ranch of George W. Littlefield, and the Matador Ranch of the Matador Land and Cattle Company) purchased Hartley County lands between 1882 and 1902.”

“In 1891 the county was organized with the tiny town of Hartley as county seat.”

“After an election in 1896, the county government was moved to Channing, where it remained despite periodic attempts to move it again; in 1903 a final election confirmed Channing as the county seat. In 1898 a weekly newspaper, the Channing Courier, was started.”

“By 1900 cattle ranching in the county had expanded considerably, though the number of ranches had declined. Almost 143,500 cattle were reported on the twenty-seven ranches and farms counted by the census, though this figure was probably inflated by Hartley County ranchers reporting their grazing property in other counties. No sheep were reported, and sorghum was the only crop of consequence grown in the county at that time. The county had 377 residents that year.”

“Railroads first entered Hartley County in 1888, when the Fort Worth and Denver Railway extended its main line westward from Amarillo through the sites of Channing, Hartley, and Dalhart, to Texline, in Dallam County. The Chicago, Rock Island and Mexico Railway, building southwesterly from Enid, Oklahoma, to Tucumcari, New Mexico, entered the county through Dalhart in 1901.”

“During the first half of the twentieth century, a road system was built in the area. By 1927 much of what later became U.S. Highway 87, running from Amarillo to Dalhart, had been built across the northeastern corner of the county, but it remained unpaved until the end of the 1930s. By the end of the next decade U.S. Highway 54, crossing the western part of the state, was paved, and a paved road, State Highway 51 (now U.S. 385), also connected Hartley and Channing.”

“The grim days of the Dust Bowl and Great Depression set the area back during the 1930s. More than 20 per cent of local farmers were compelled to give up their lands, and by 1940 only 207 farms remained in the county. As a result, the population dropped to 1,873 by 1940. The establishment of Dalhart Army Air Field in northern Hartley County during World War II helped to revive the economy, however, and crop production also picked up as farmers increasingly tapped the huge Ogallala Aquifer for water; during this time Hartley County developed an economy based on both ranching and wheat, corn, and sorghum culture.”

“Irrigation of farmland steadily increased during the postwar years, and by 1980 more than 100,000 acres of local cropland was irrigated. That year the county earned $95 million in agricultural receipts, with ranching accounting for about $72 million and farming more than $22 million. In 2002 the county had 253 farms and ranches covering 789,289 acres, 64 percent of which were devoted to pasture and 35 percent to cropland.”

I was the guest of Channing and Hartley County on July 19, 2013 and returned to rephotograph the courthouse on December 22, 2017.

Shortly after the county was organized in the burgeoning years of the 1890s, contractor W.M. Andrews was hired to construct a frame structure to serve as the area’s courthouse. According to the results of a recent election, it found its home at the center of the town square in Hartley (the elected county seat). For five years, this relatively simple building “worked”, until a second county-seat election arose on the ballot following lobbying from XIT ranchers who were, for their own interests, vying for the community of Channing to take up the title of county seat.

In October 1896, the title of seat migrated to Channing, where it has lived ever since. The frame courthouse was subsequently dismantled and physically moved the approximate fifteen mile distance to the south. Legend has it that the movers were actual XIT cowboys.

From 1896 to 1906, this reassembled courthouse continued to serve the region’s citizens until the commissioners court authorized the construction of a newer, larger court building and the frame structure met its bitter end.

Hartley County’s commissioners voted to approve the funds for a second courthouse in May of 1905 and construction promptly began led by the Solan & Wickens firm. Plans were drawn up by O.G. Roquemore of Amarillo, who was also behind the designs of nearby Oldham County’s courthouse in Vega.

At a final cost of $10,525, the courthouse was completed in October 1906 and featured its own water well and lighting system. In 1927, the county clerk’s office received a vault and eight years later, Hartley County purchased a second one. That same year (1935), a series of jury dormitories were added on. Additionally, at some point, a miniature forest was planted that almost completely obscures the courthouse’s entry façade during the summertime months.

By chance, a rare wintertime courthouse visit allowed me to avoid this problem altogether.

Home, home on the range… 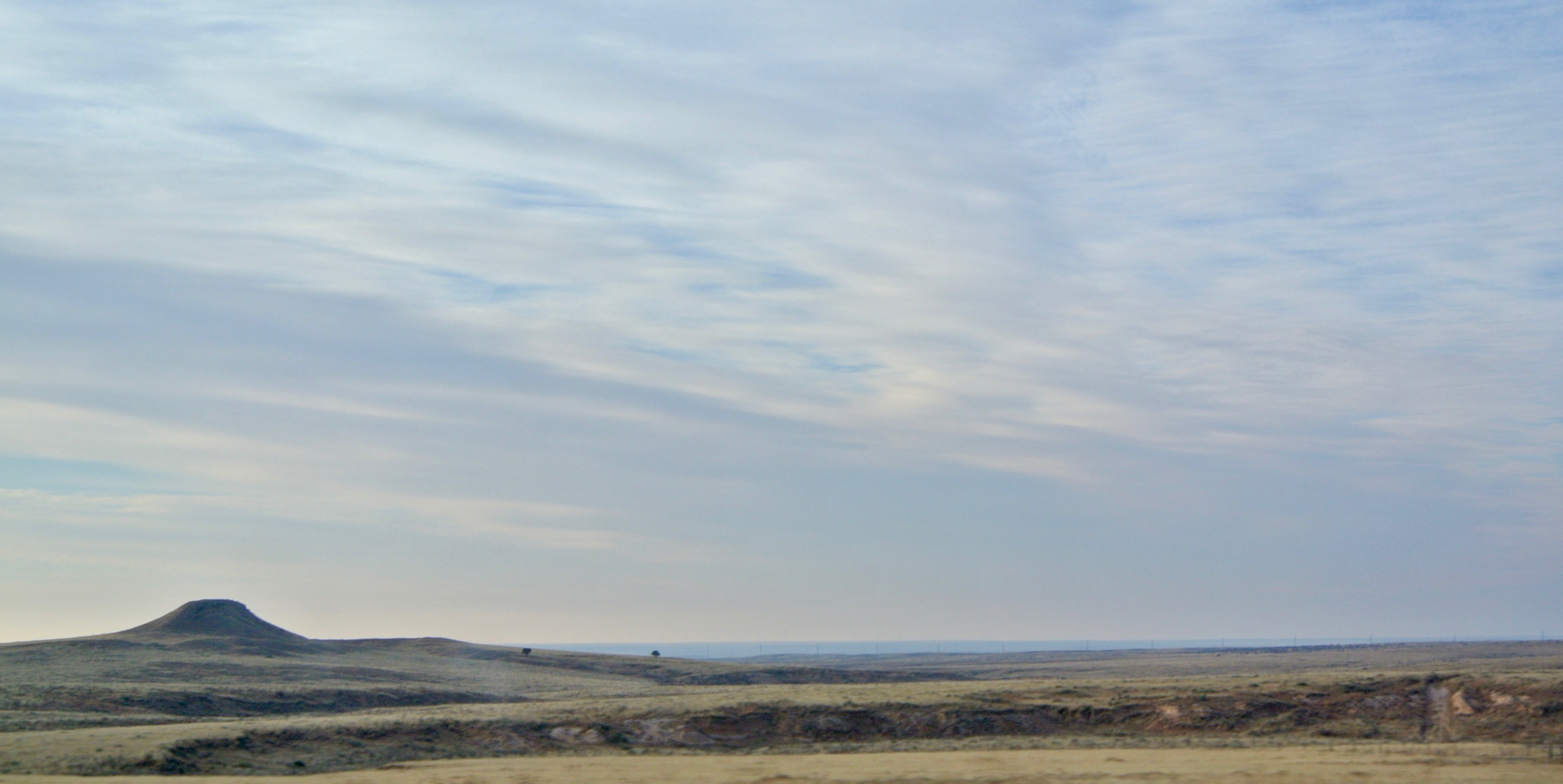 …where the deer and the antelope play 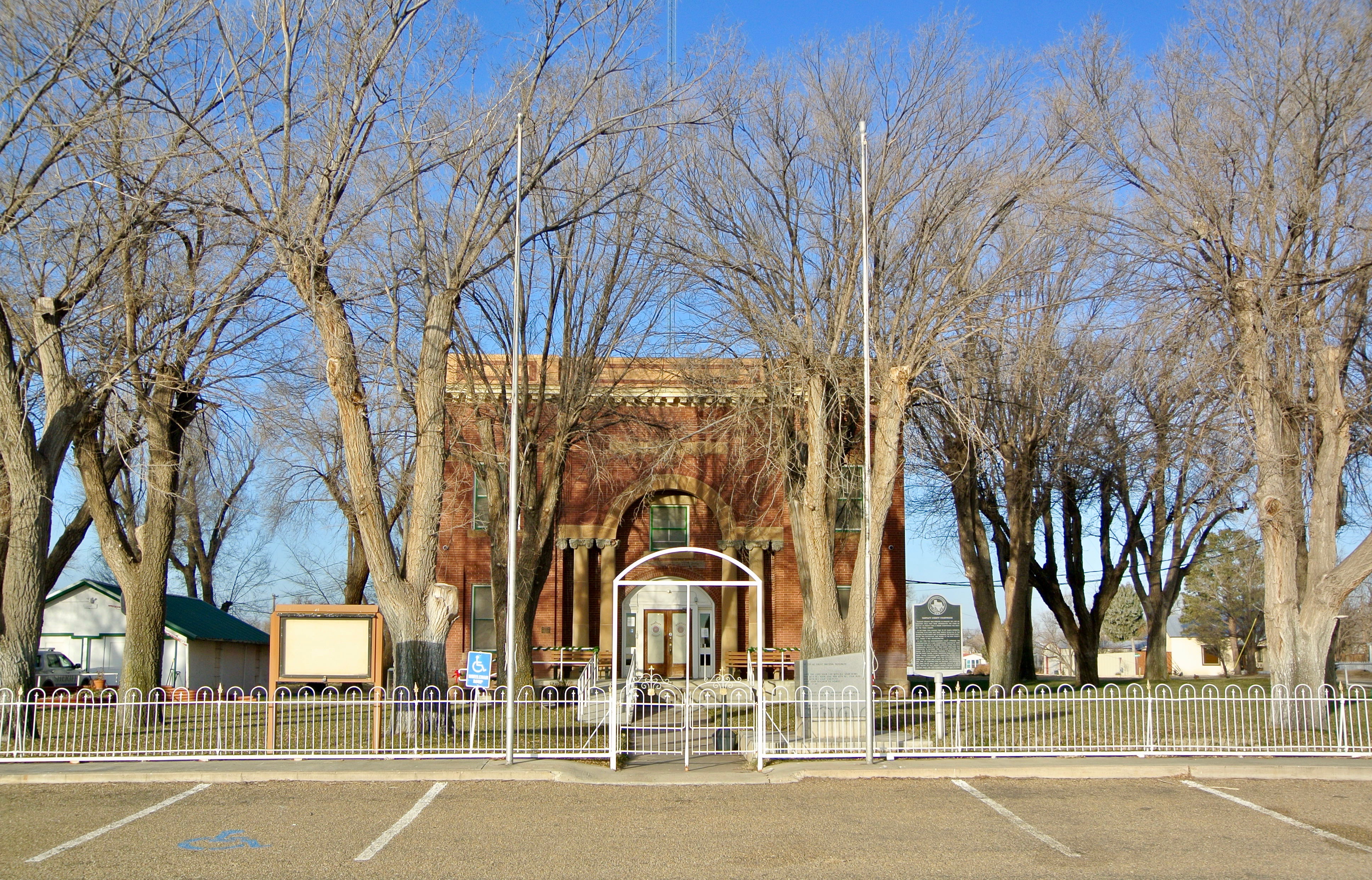 The quaintly situated Hartley County Courthouse, on what remains of Channing’s Main Street

However, the Main Street entrance is barred by a wrought iron gate that doesn’t open. 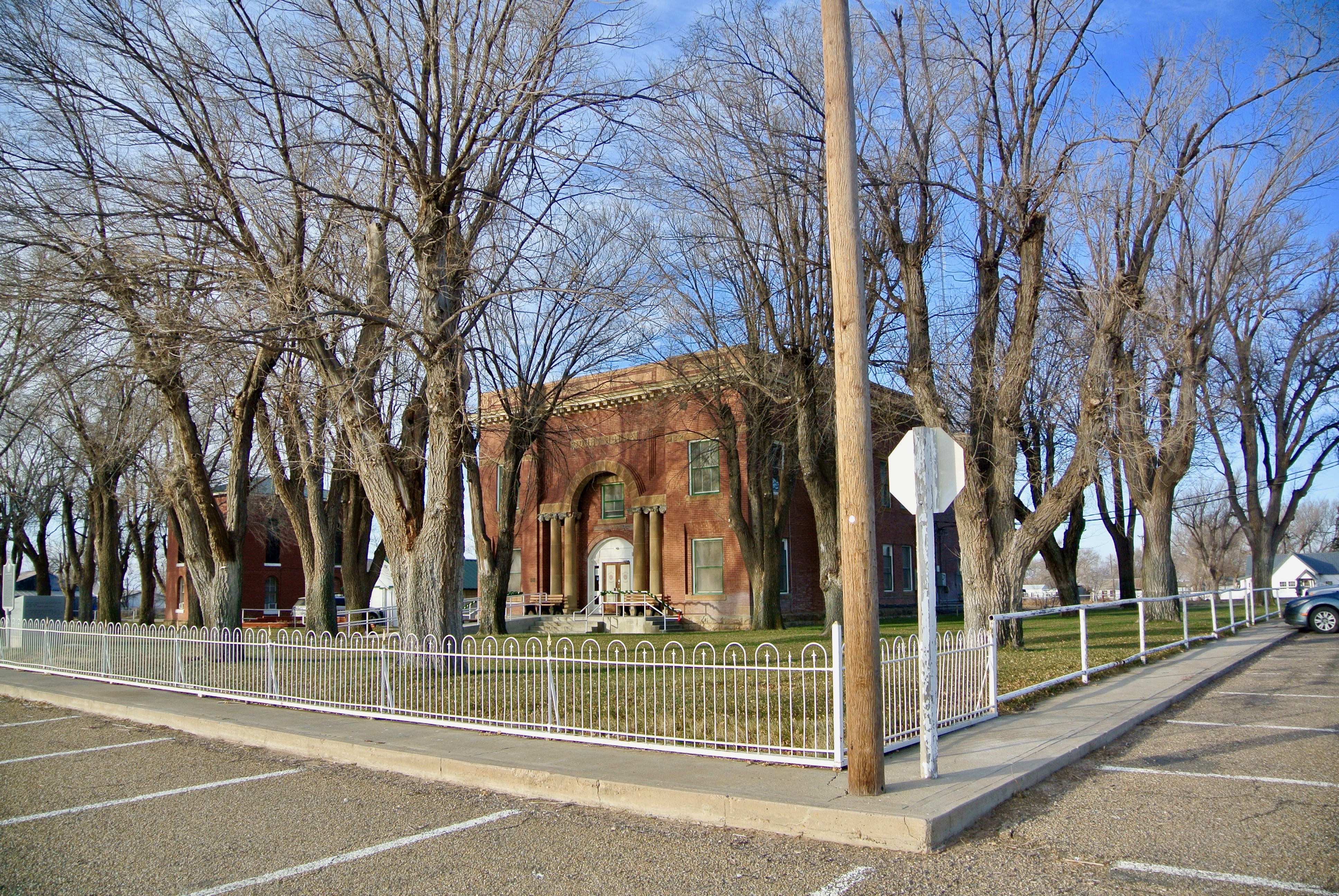 Here’s the view from the northeast corner of the courthouse property at Main & 9th. 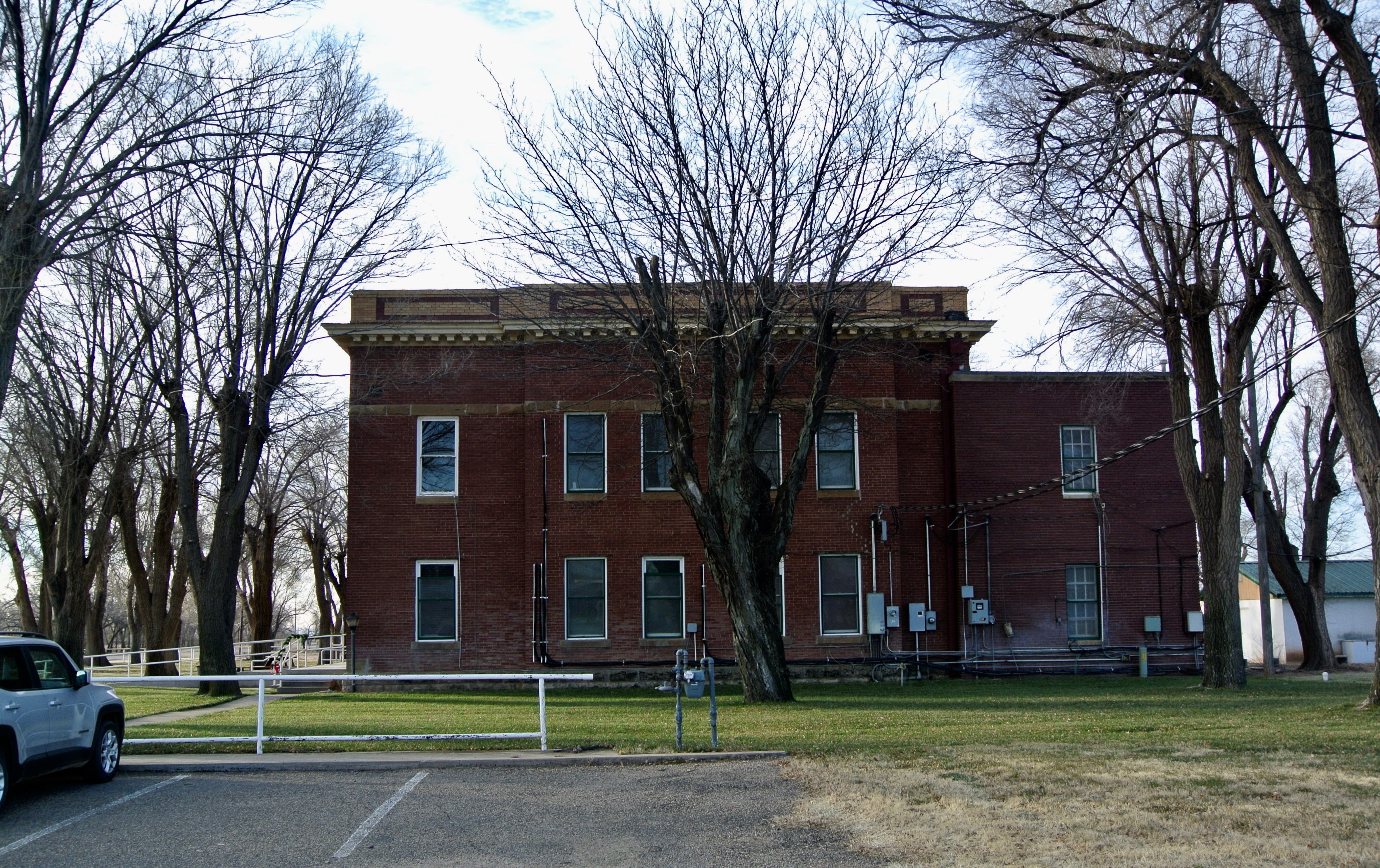