“Jackson County, one of the original counties of Texas, was formed in 1836 from the old Mexican municipality of Jackson. Both the municipality and the county were named after President Andrew Jackson and were settled predominantly by American colonists. Jackson County comprises 844 square miles.”

“Six of Stephen F. Austin‘s Old Three Hundred families settled in the future county. So many of the early colonists came from Alabama that for a time the municipality became known as the “Alabama Settlement.” During the early 1830s the area was also inhabited by Lipan Apache and Tonkawa Indians. Although they made no attacks upon the settlers, the Indians made numerous night raids to steal crucial supplies. In 1832 the thefts became so serious that the local militia mounted an offensive against the local Indians that culminated in a skirmish on Sandy Creek.”

“On July 17, 1835, area settlers met for the Lavaca-Navidad Meeting, where they adopted resolutions protesting the actions of the Mexican government. On December 5, 1835, as American colonists and their Federalist Tejano allies fought to capture San Antonio de Béxar, the provisional government of Texas established Jackson Municipality. With the surrender and departure of Centralist forces in Bexar, citizens of Jackson Municipality mistakenly anticipated that 1836 would herald the beginning of a new prosperity. Texana was the port of entry and training camp for many volunteers from the United States in the Texas Revolution.”

“The old Alabama Settlement continued to grow during the period of the Republic of Texas. In 1836 the municipality was organized into Jackson County. Camp Independence, near Texana, served as campsite and training ground for the Army of the Republic of Texas. Texana, in addition to being a military post, a port of entry, and an important trading center, was also named the county seat in 1836.” 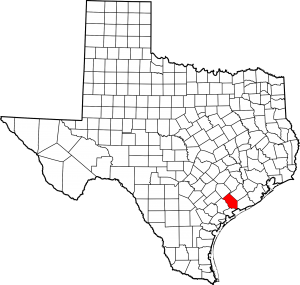 “Jackson County lost large sections on the north, south, and east to the newly formed Calhoun, Wharton, and Lavaca counties in 1846. The western boundary, however, was extended to Arenosa Creek. In 1848 more eastern acreage was ceded to Matagorda County. During early statehood Texana emerged as the county’s chief town.”

“The coastal plains proved well suited for maintaining large herds, and by the eve of the Civil War nearly 80,000 cattle were maintained in the county, including 3,500 milk cows. Hogs were also raised in sizable numbers; in 1860, 8,937 were reported. Many of the county’s slaves worked as drovers or cowhands or were used to grow and cut silage.”

“Although Jackson County was spared a great deal of the violence that much of Texas suffered during Reconstruction, the county nonetheless suffered an extended period of lawlessness. Violence and crime became widespread, and law-abiding travelers soon learned to avoid the lightly settled range country. The town of Morales served as a haven for fugitive criminals from surrounding counties and was the site of more killings than any other settlement in the county. The notorious Dalton Gang reportedly took refuge in a Morales hideout while eluding a posse. By the mid-1870s, however, order had been largely restored, and the white political elite had reasserted its dominance.”

“In 1881 Count Joseph Telfener, representing the railroad, approached the businessmen of Texana for a $30,000 bonus to construct the line through their town. The citizens declined, thinking that a railroad would be detrimental to the existing shipping trade. Telfener therefore selected another route and named one of the main stations on it Edna, after his daughter. A settlement developed around the station, and soon Edna grew into a town. Meanwhile, large numbers of Texana residents moved to Edna; in January 1883 county voters chose by a margin of 272 to 17 to make Edna the county seat.”

“With the dawning of the twentieth century, Jackson County remained predominantly agricultural. Cotton was the leading crop, although sugarcane was also produced in sizable quantities. The mainstay of the economy, however, continued to be beef cattle. Between 1890 and 1900 the number of cattle on Jackson County farms and ranches grew from 53,927 to 69,273, and by 1910 it reached a peak of 104,937.”

“During the Great Depression of the 1930s, when all farmers were hard pressed, tenants were particularly affected. As a result of poor yields and the reluctance of banks to extend credit to broke farmers, many of those who made a living from the land, particularly tenants, found themselves in a precarious position. Many were forced to leave.”

“During the late 1930s agricultural prices began to rebound, but the economy did not fully recover until after World War II. Afterward, Jackson County was a leading producer of rice and cattle. In the early 1990s rice culture was the number-one agricultural activity, with some 30,000 acres under production. Other leading crops included corn, grain sorghums, and beef cattle. Cotton was also still produced, although it never again equalled its peak during the boom years of the 1920s.” 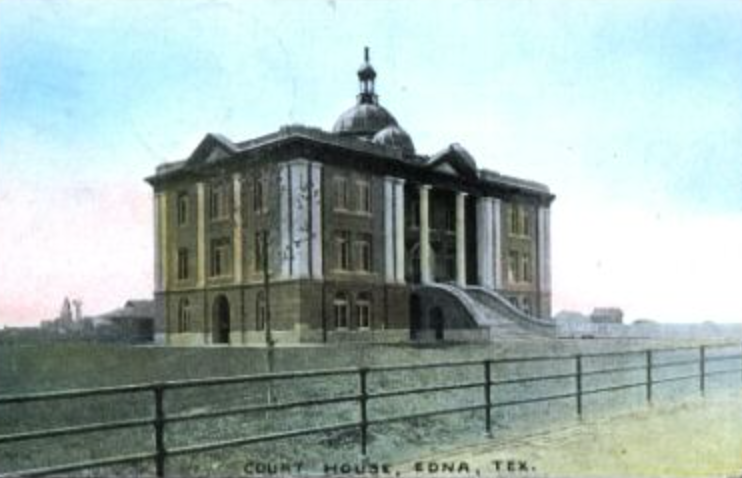 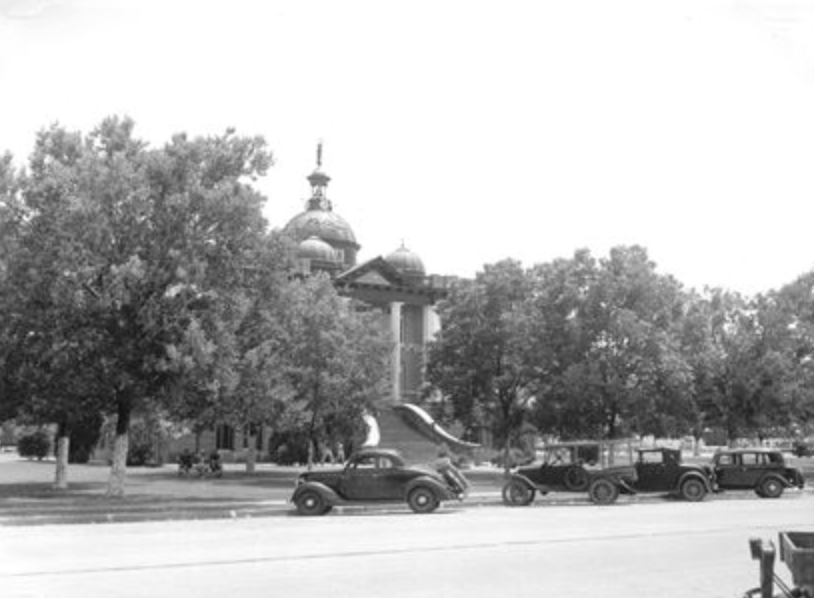 Charles H. Page Jr. created this courthouse in the Beaux-Arts Style, a building relatively similar in design to his work in Fort Bend County. N.A. Dawson served as the contractor. The year 1906 saw its completion at a cost of $43,000.

The historic cornerstone is on display inside the courthouse. 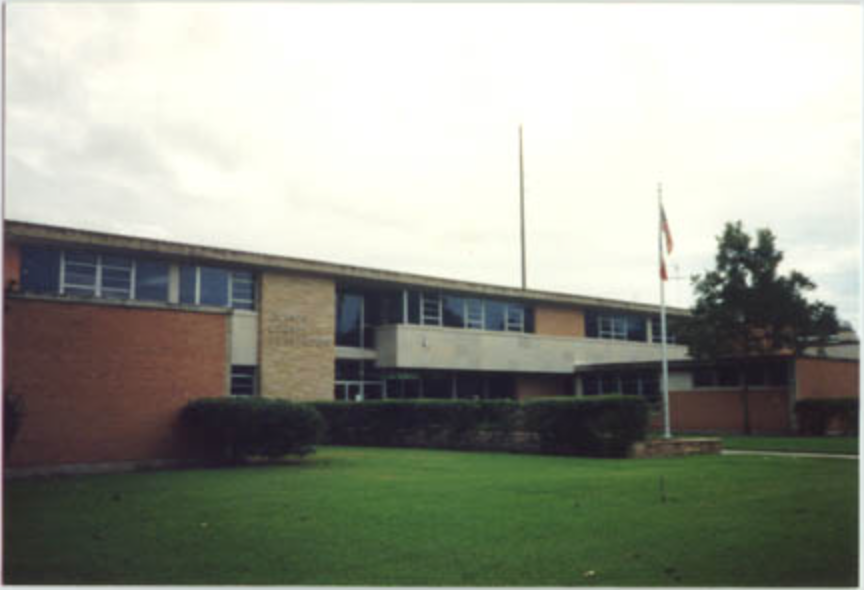 The Texas Historical Commission describes this modern design of F. Perry Johnson as a:

It went up in the 50s (when the 1906 one came down), thanks to the participation of contractor J.B. Hughes. It has served ever since.

The main entrance faces northwest on Main Street, at the heart of downtown Edna. 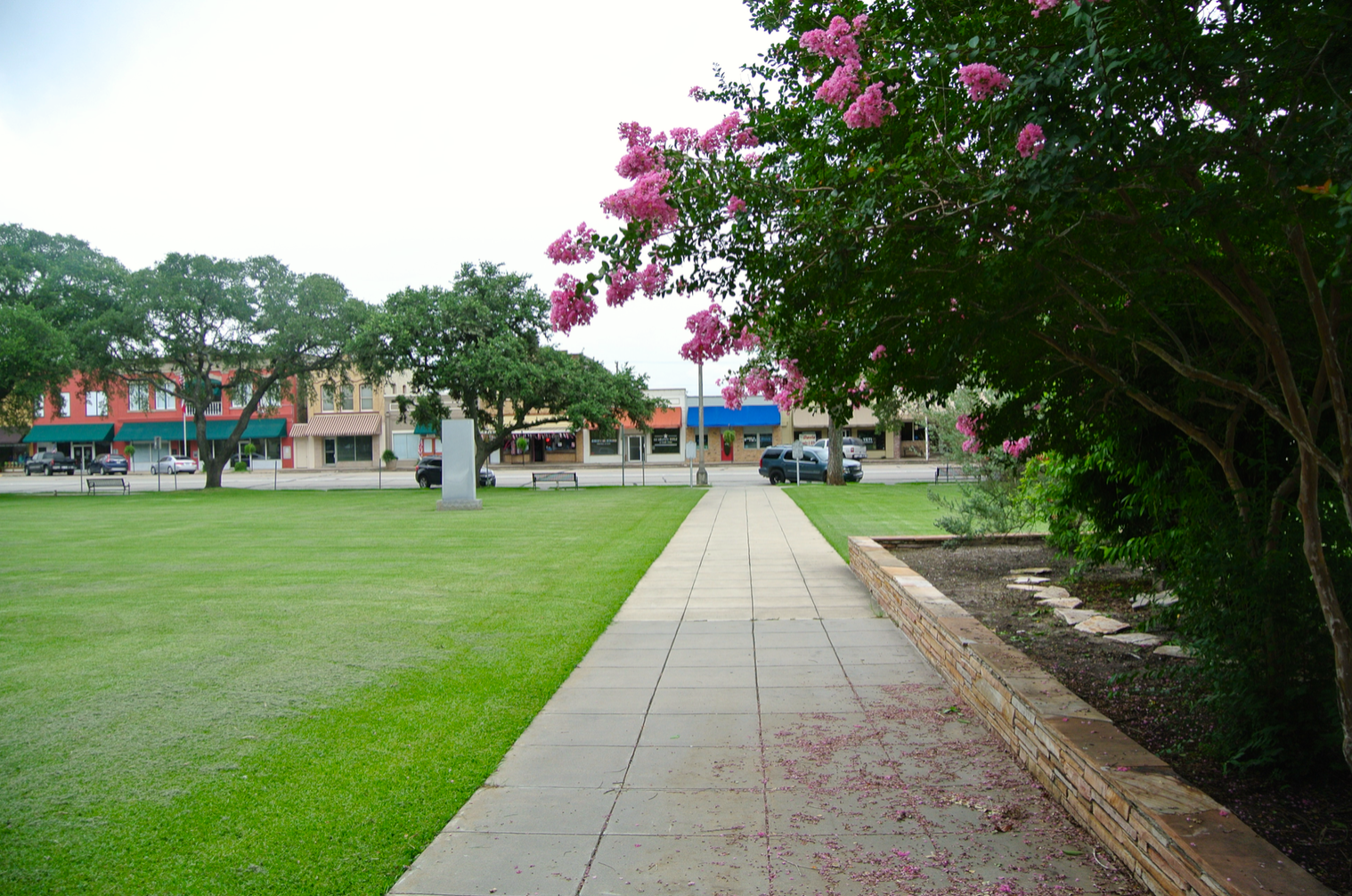 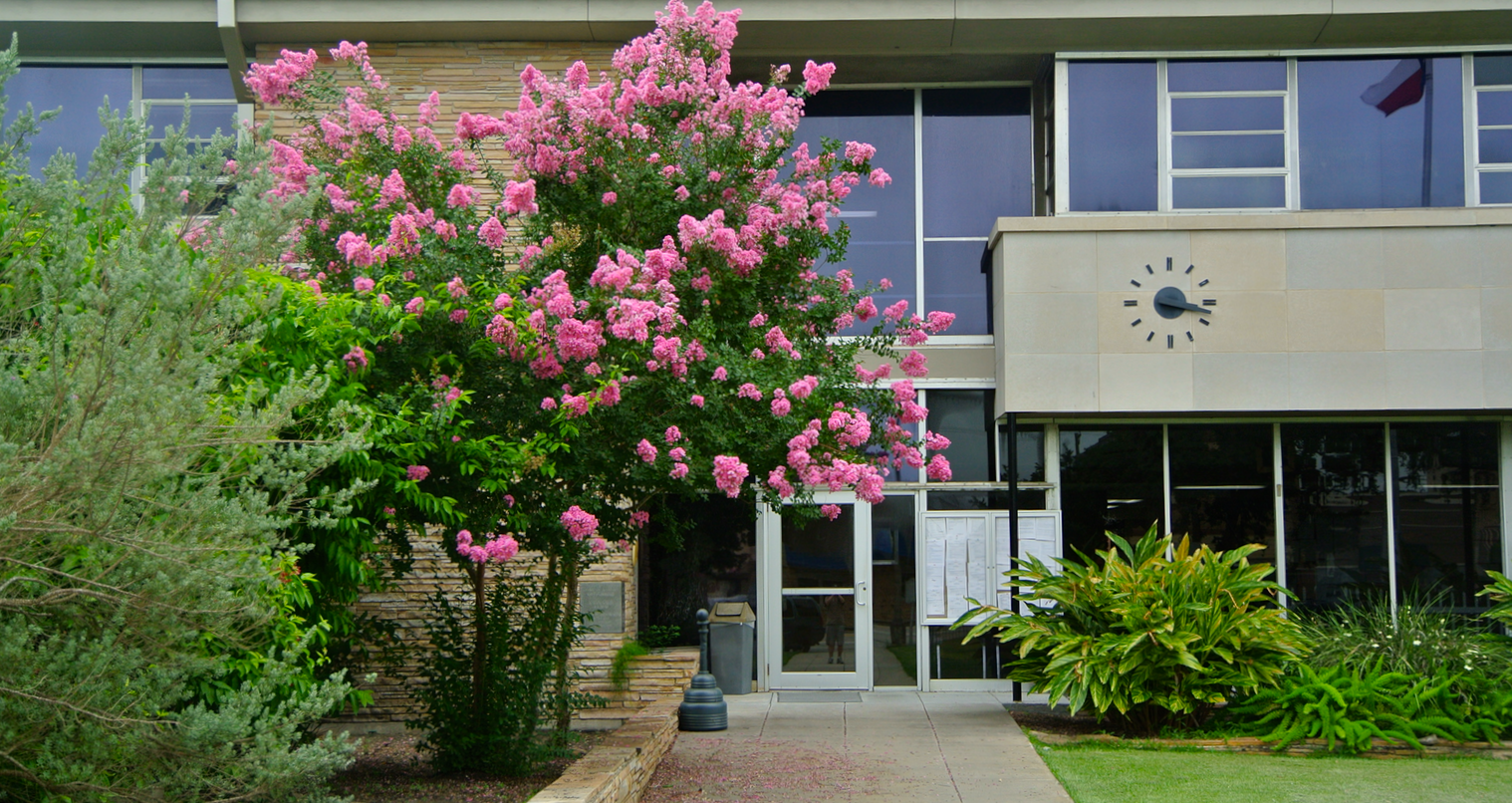 The pink flowers and other forms of landscaping bring some life to the building. 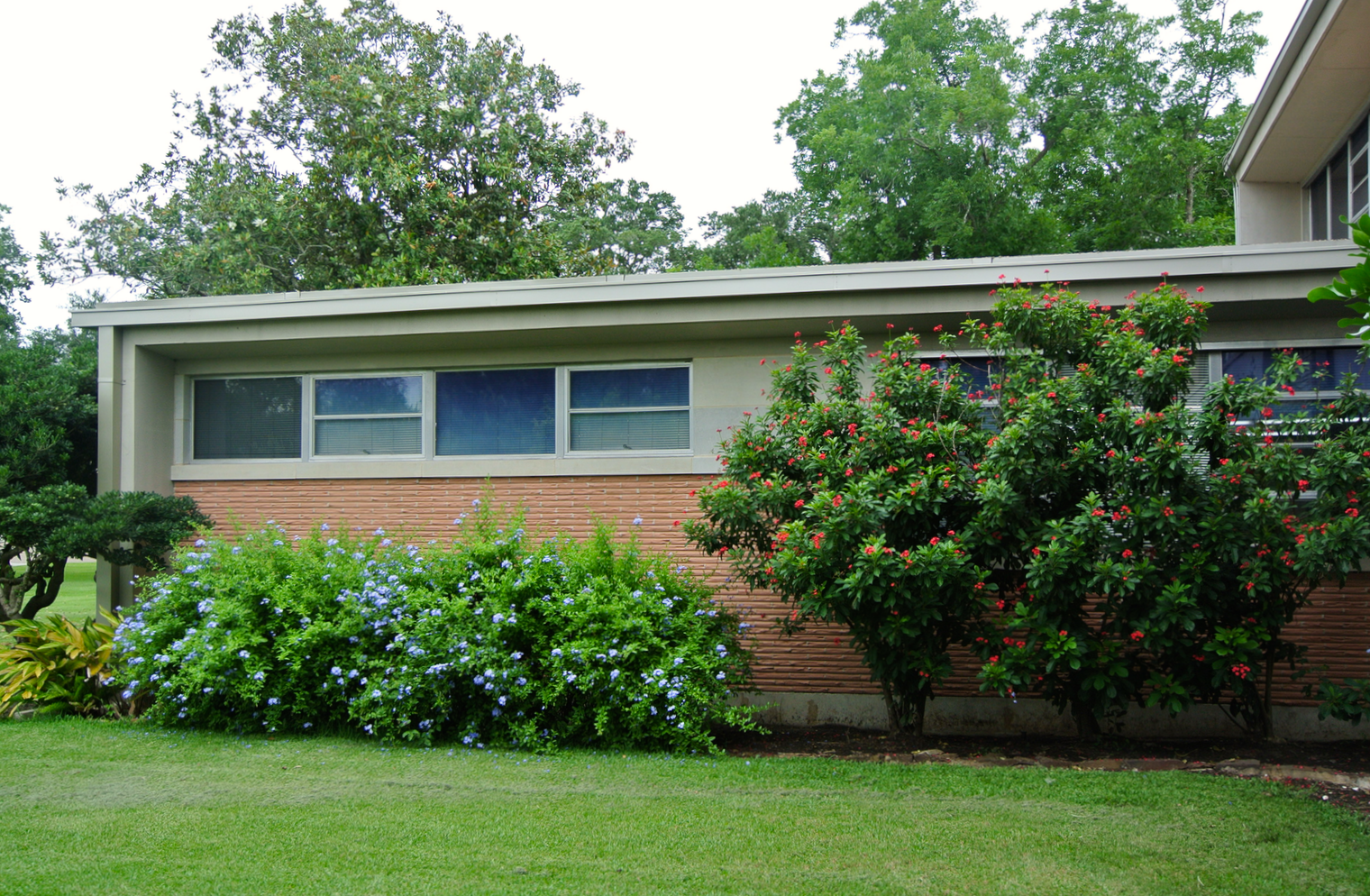 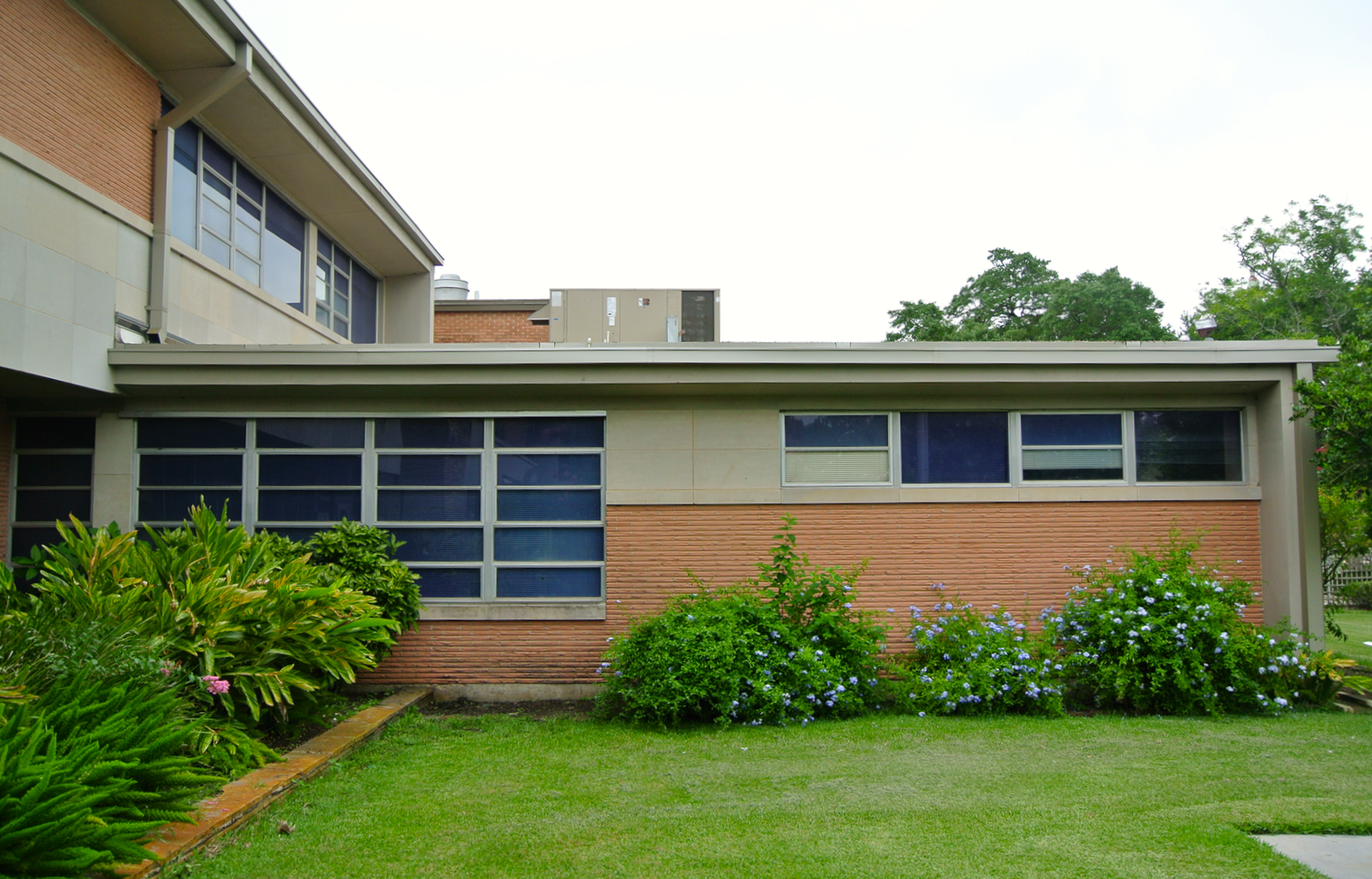 Wings near the front doors 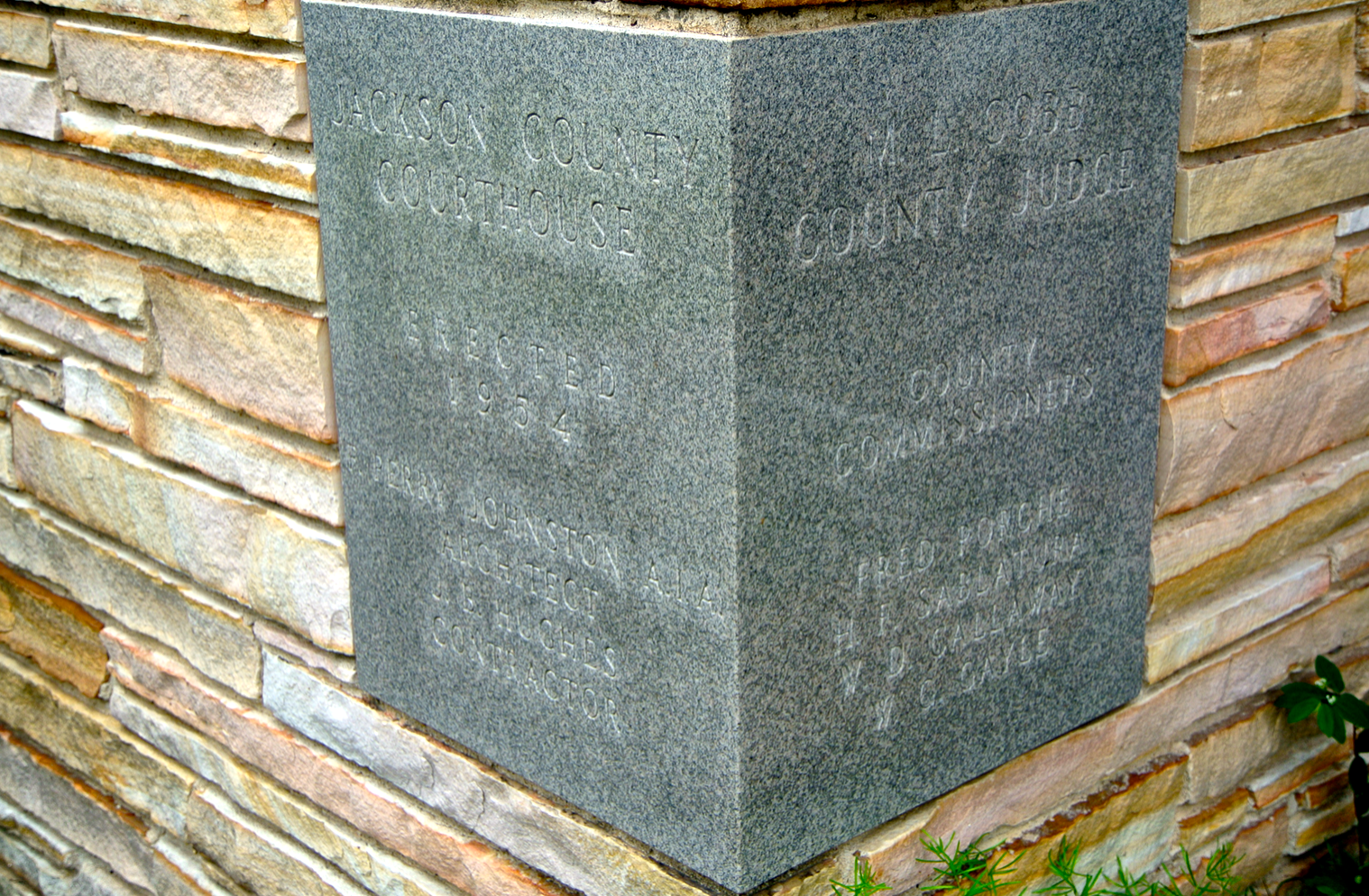 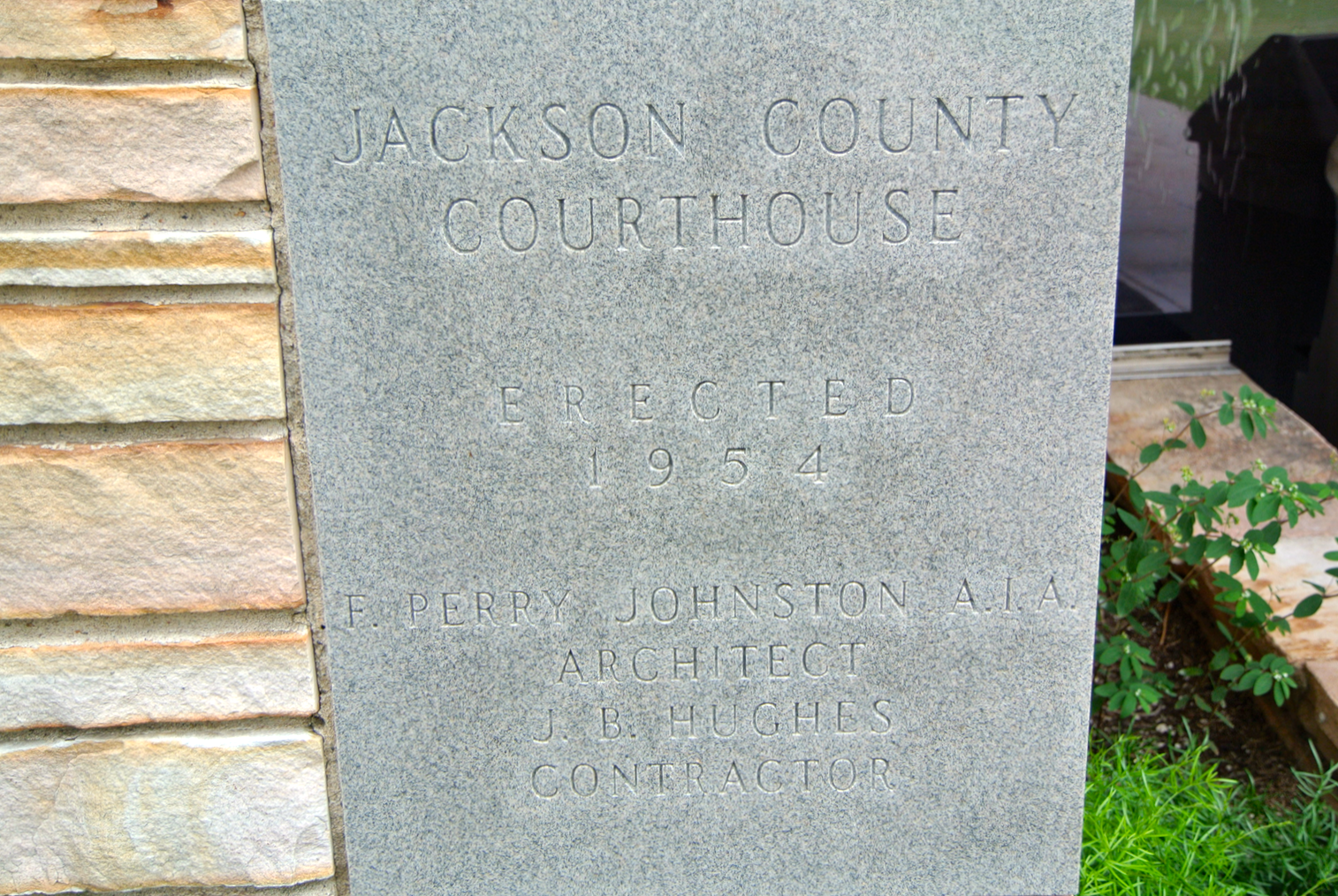 To the left of the front entrance 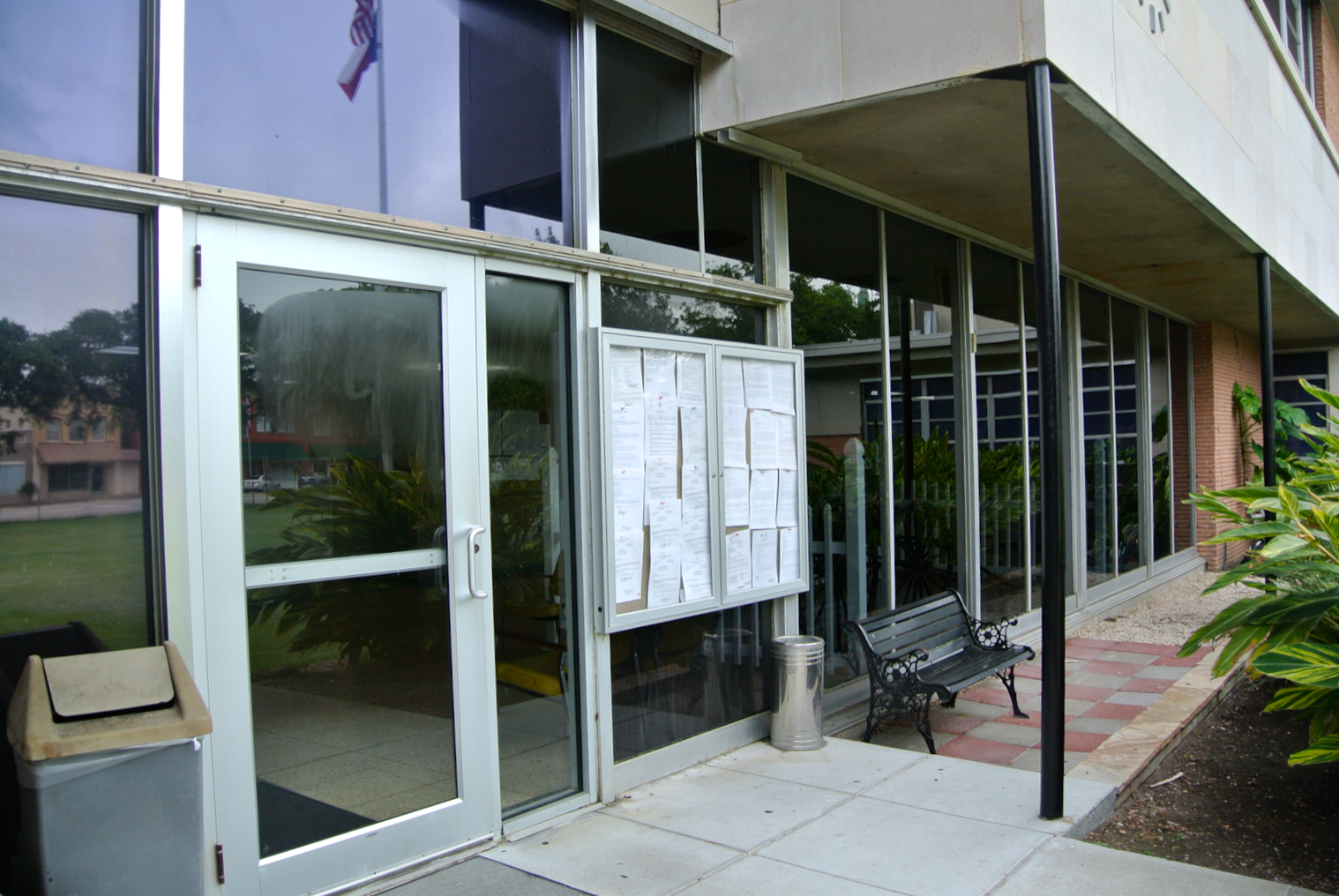 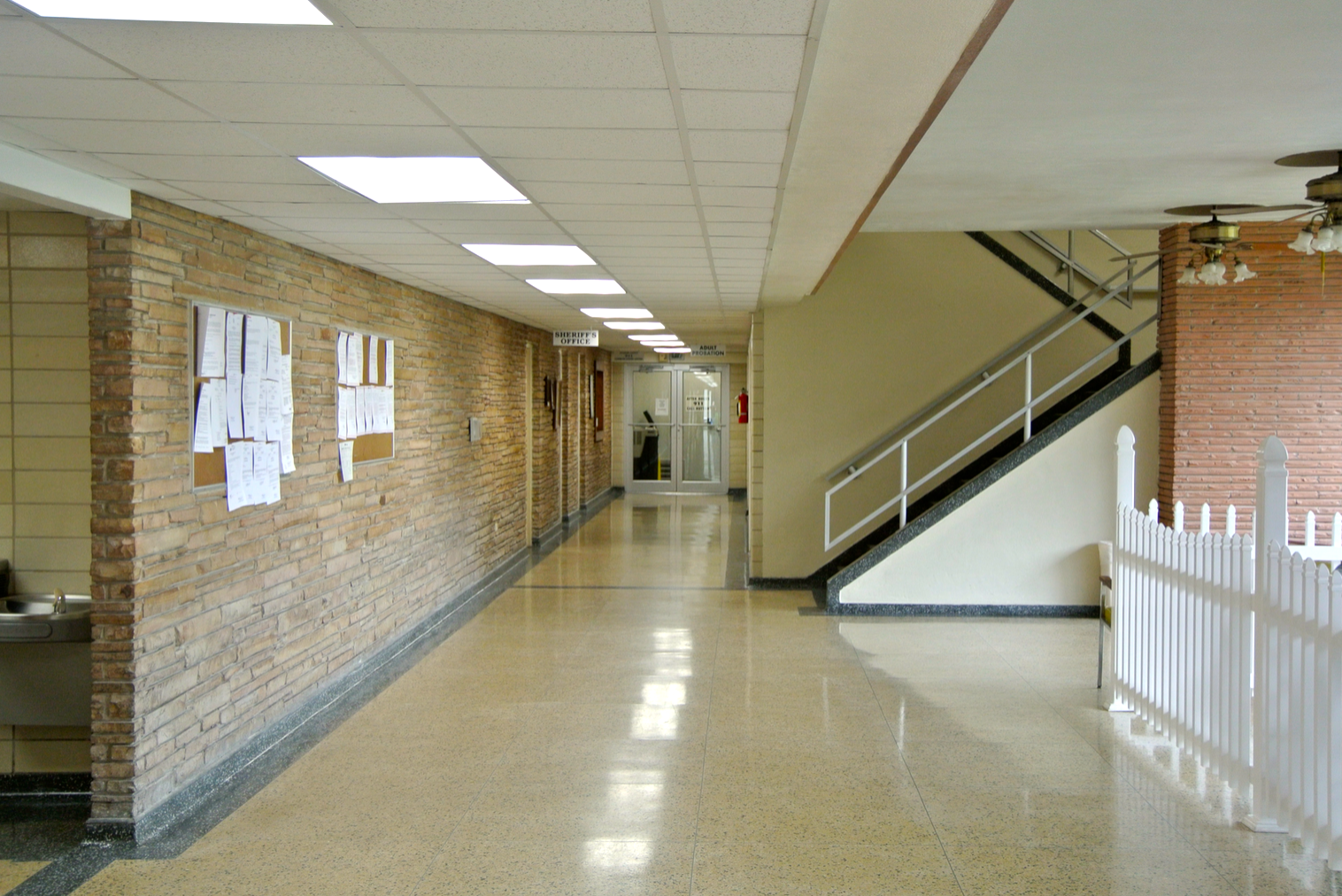 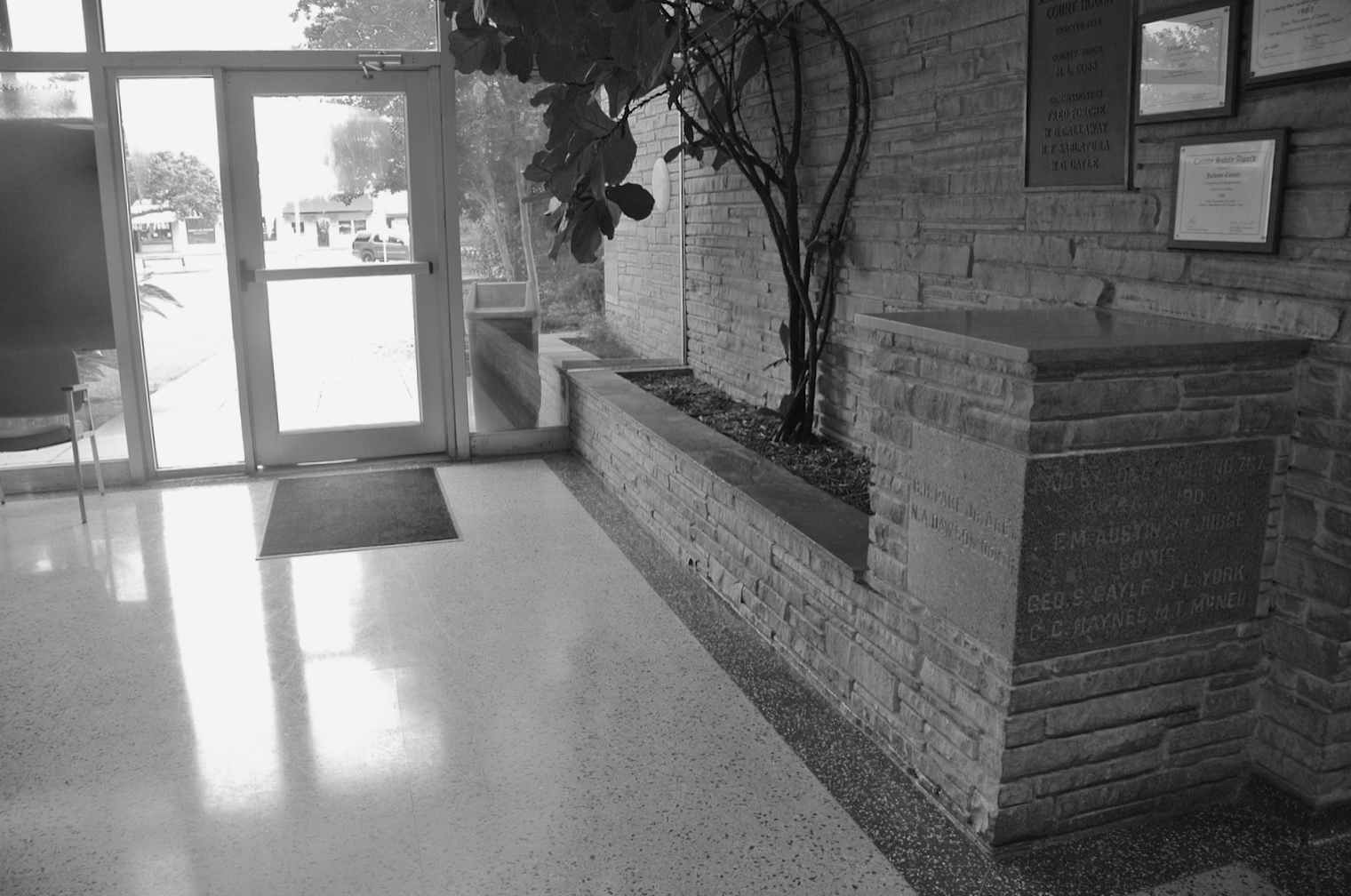 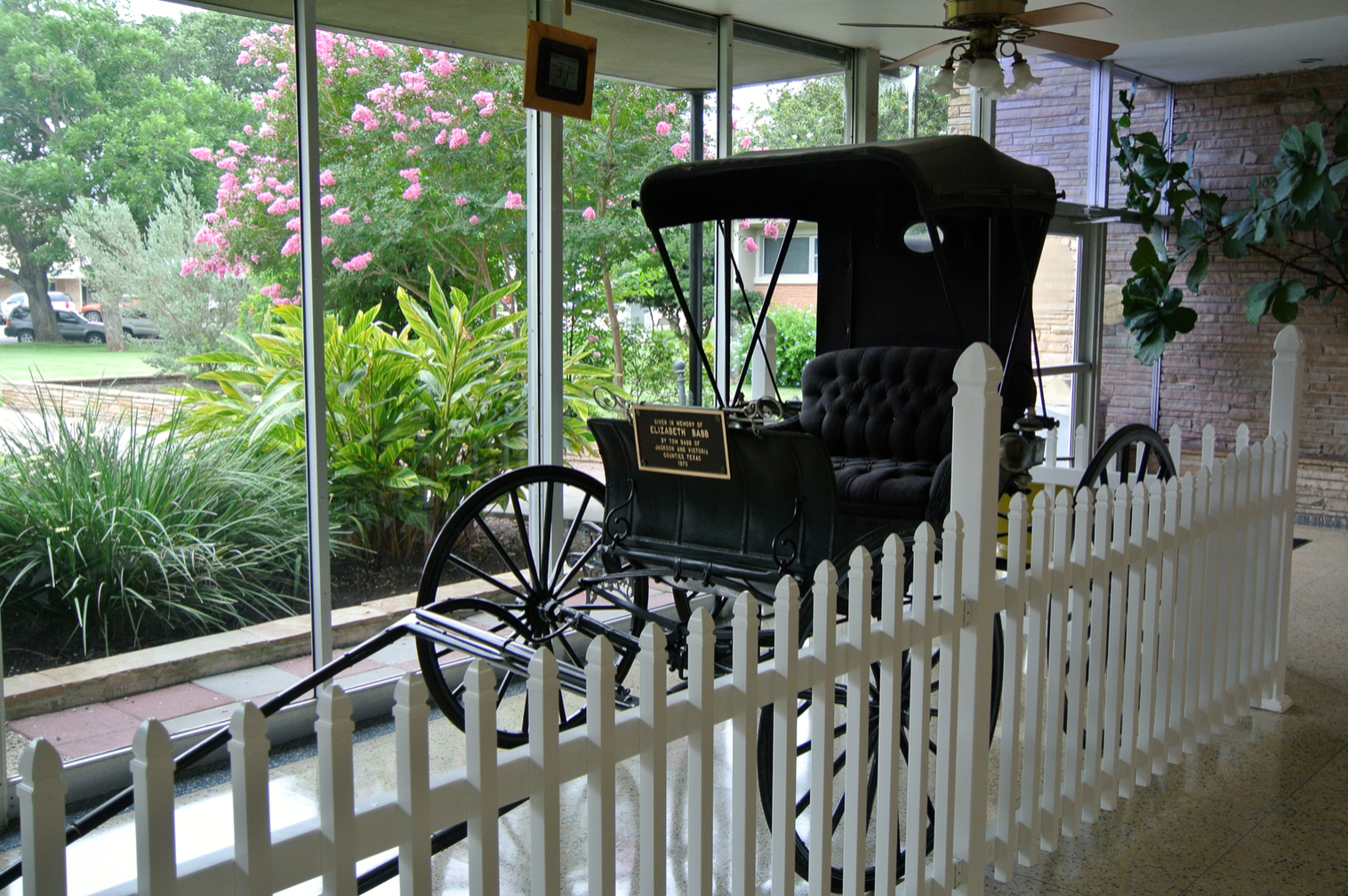 A historic carriage is on display here. 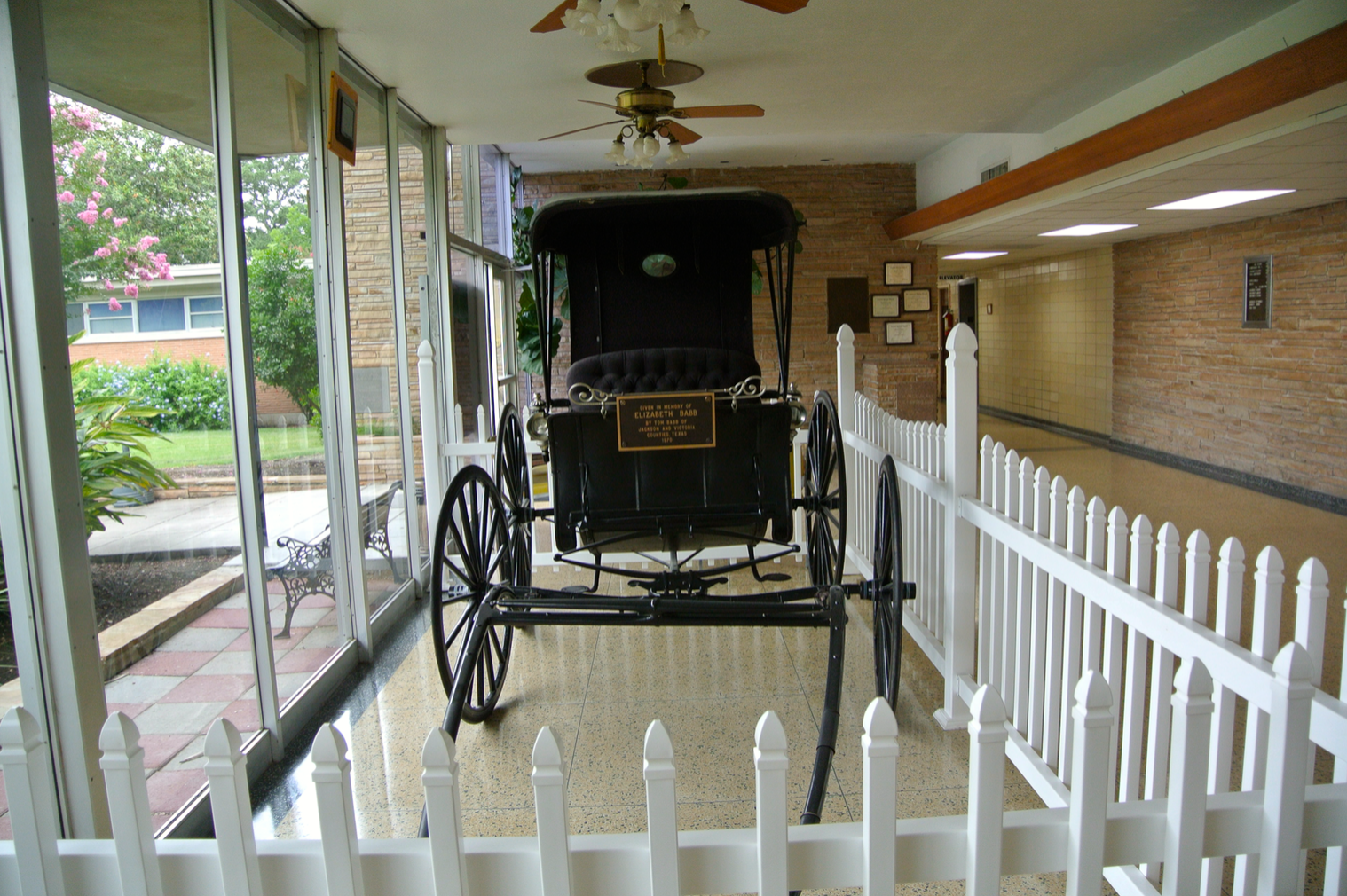 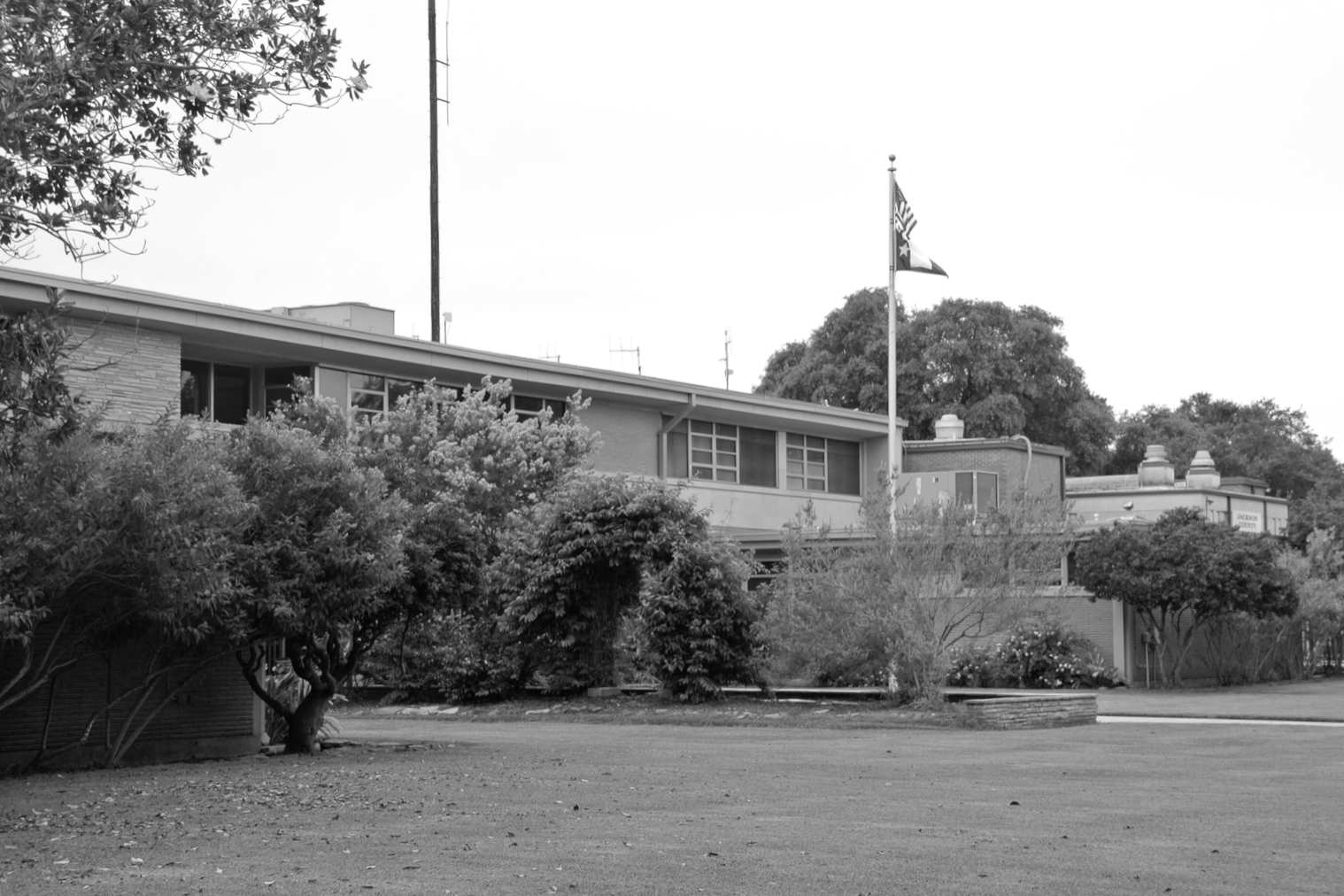 The rear of the building is anything but picturesque. It faces Houston Street. 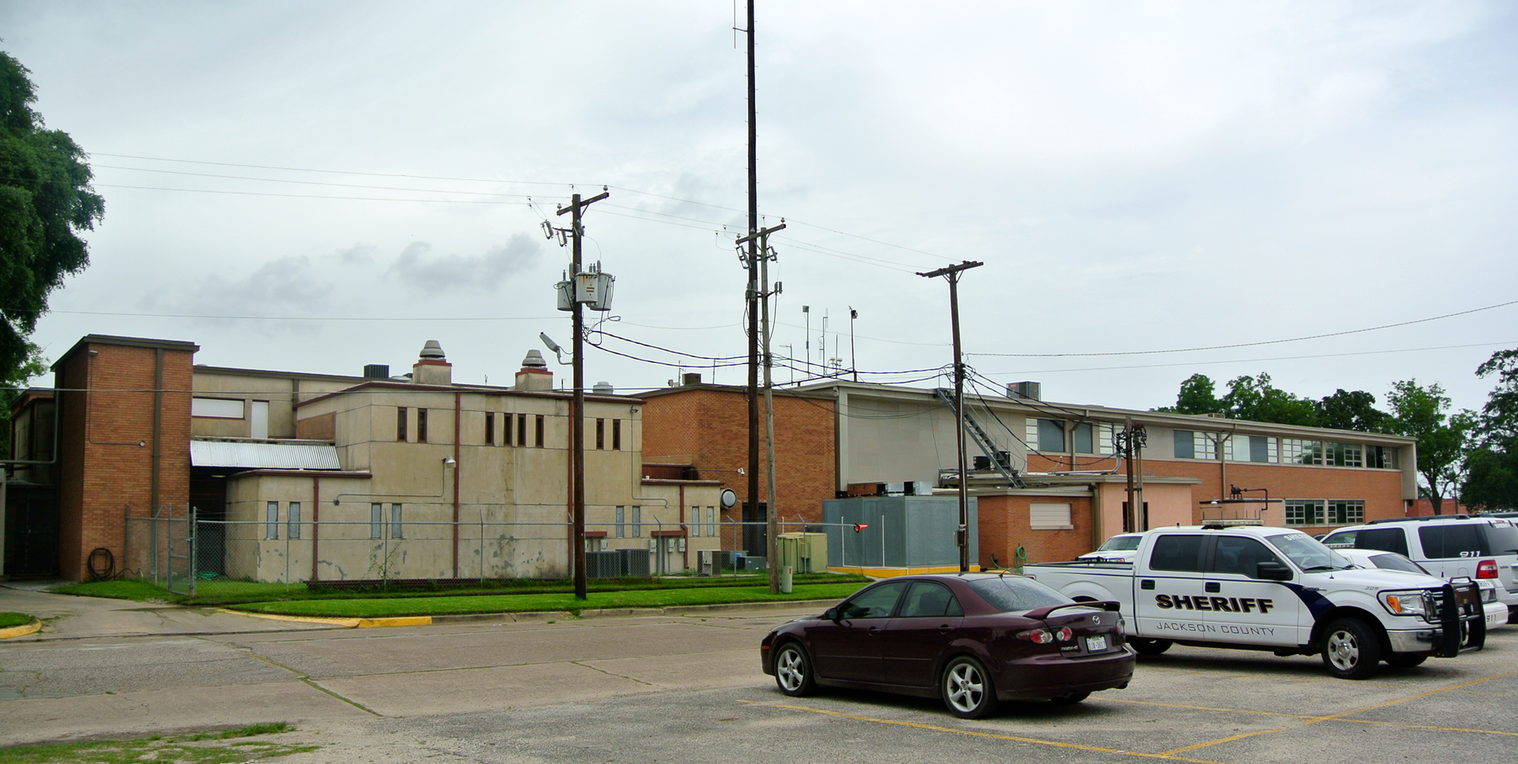 The Jackson County Detention Center backs up to the courthouse here. 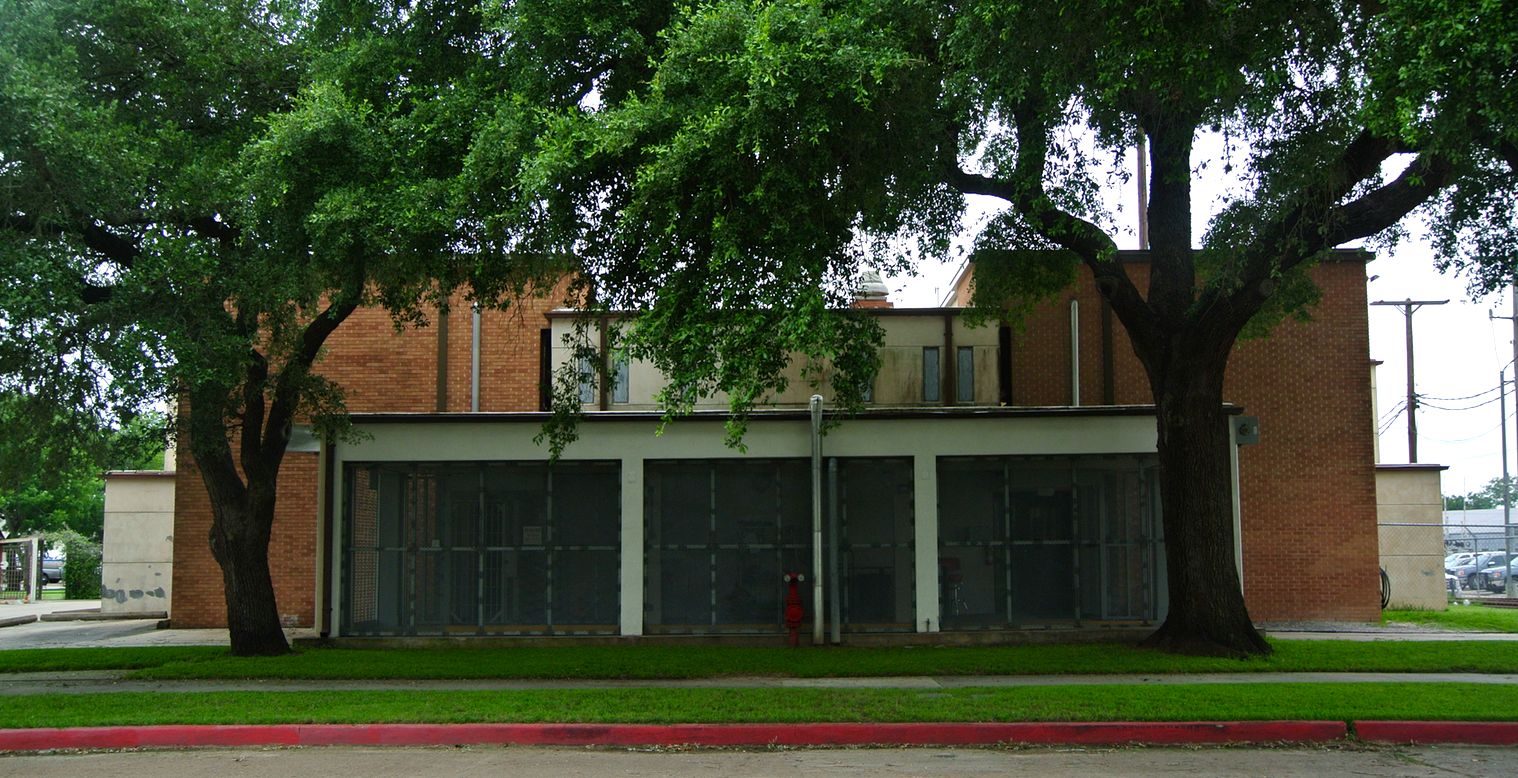 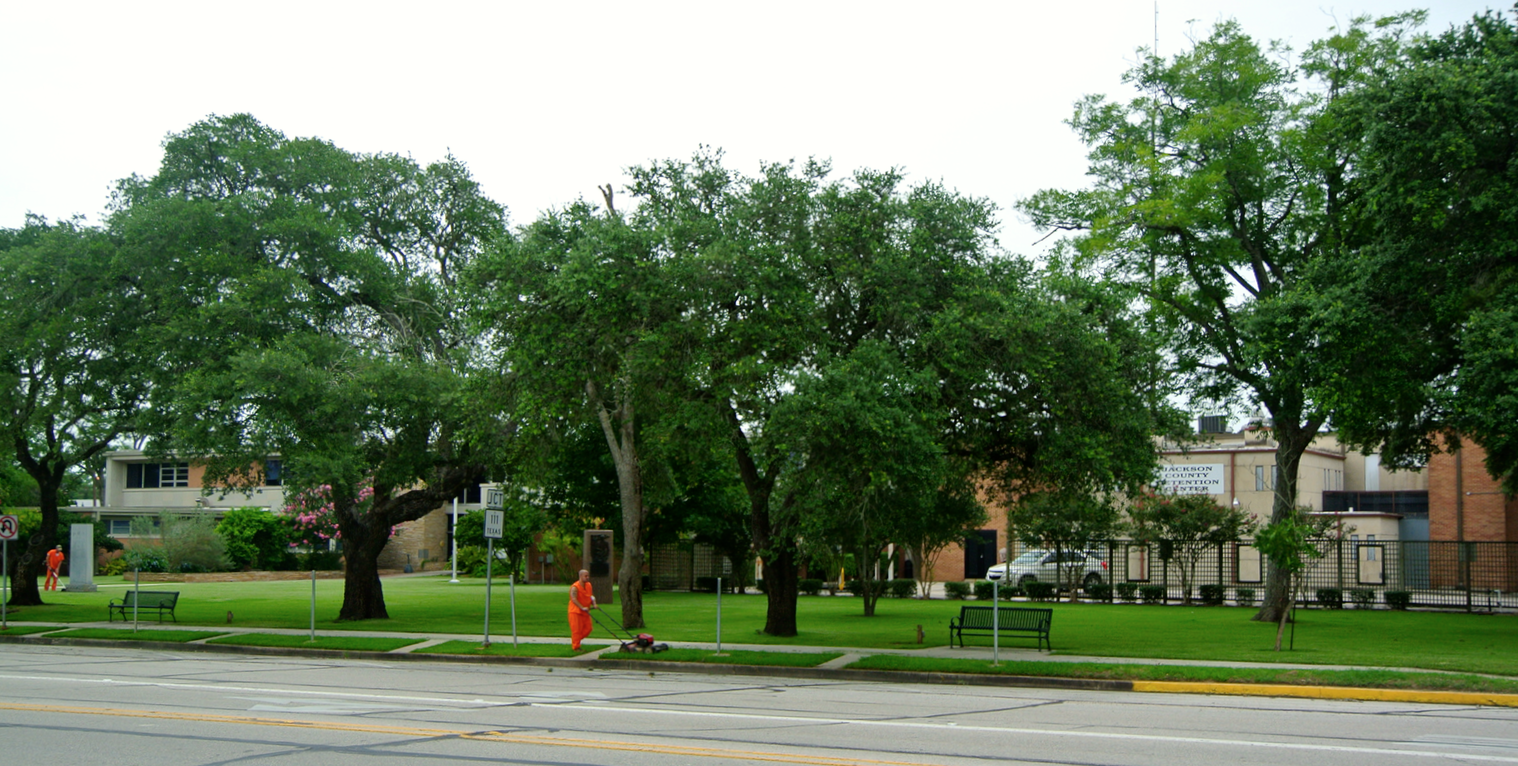 In fact, inmates from the center were busy mowing and weed-wacking during my visit. 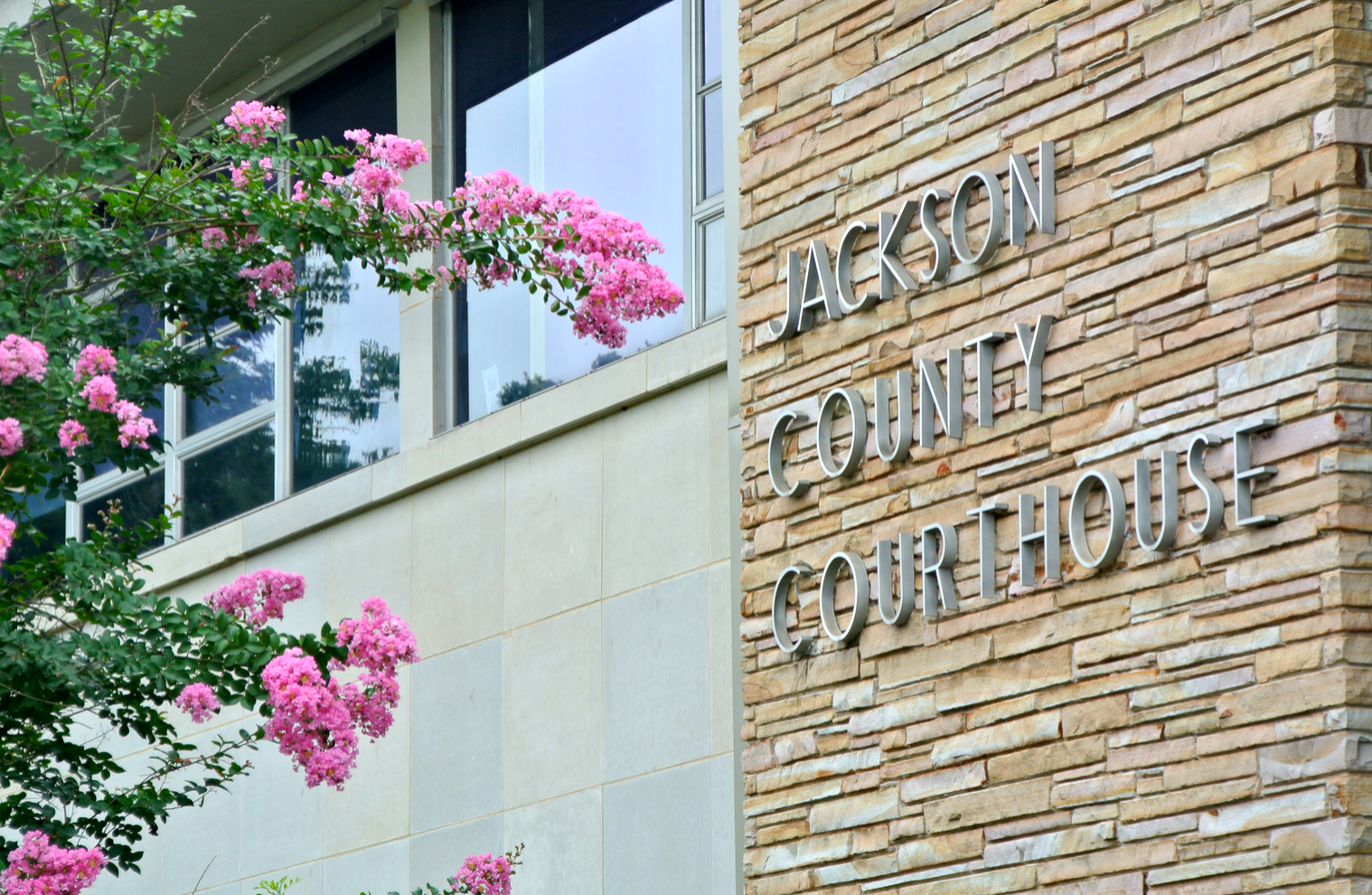 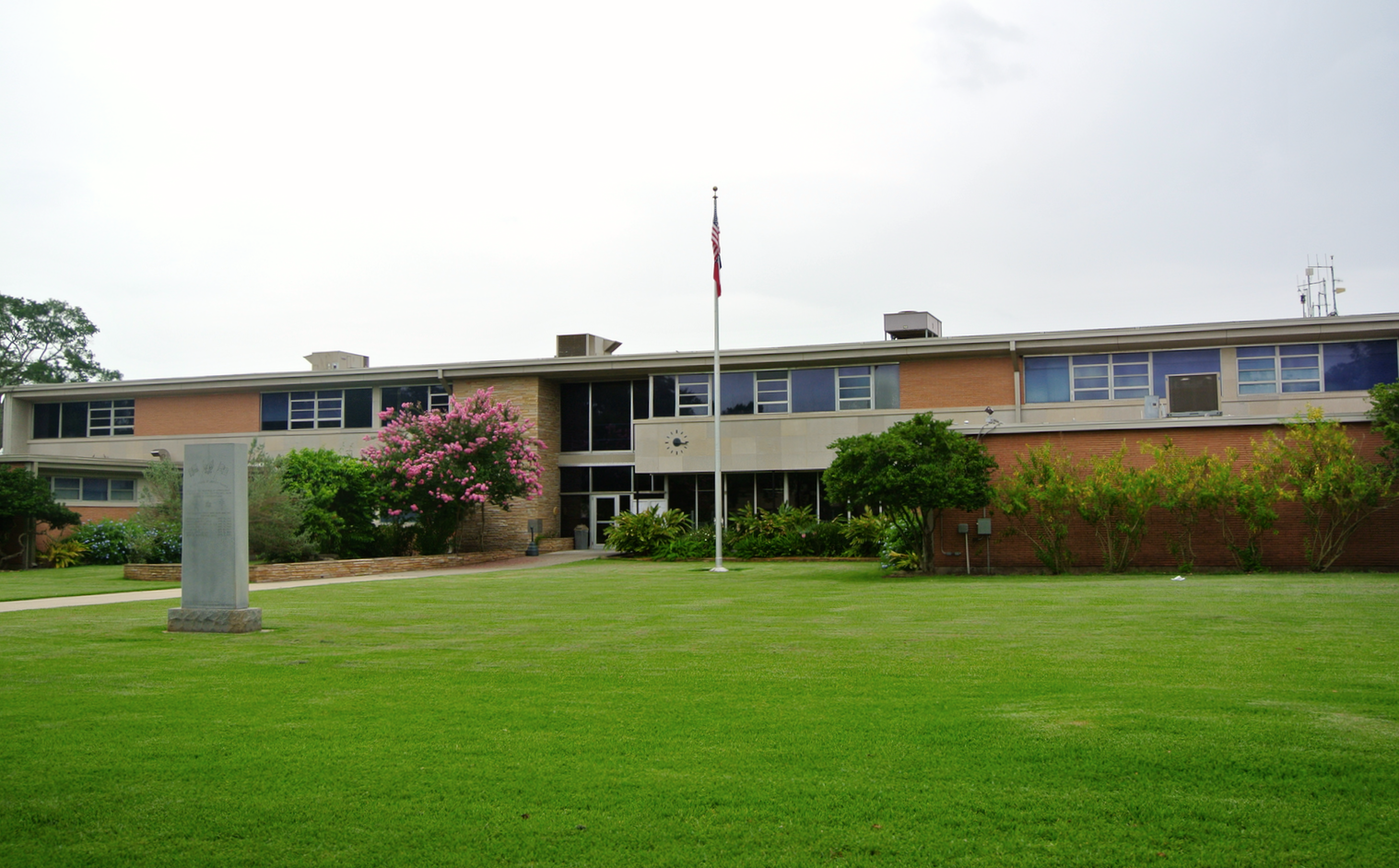 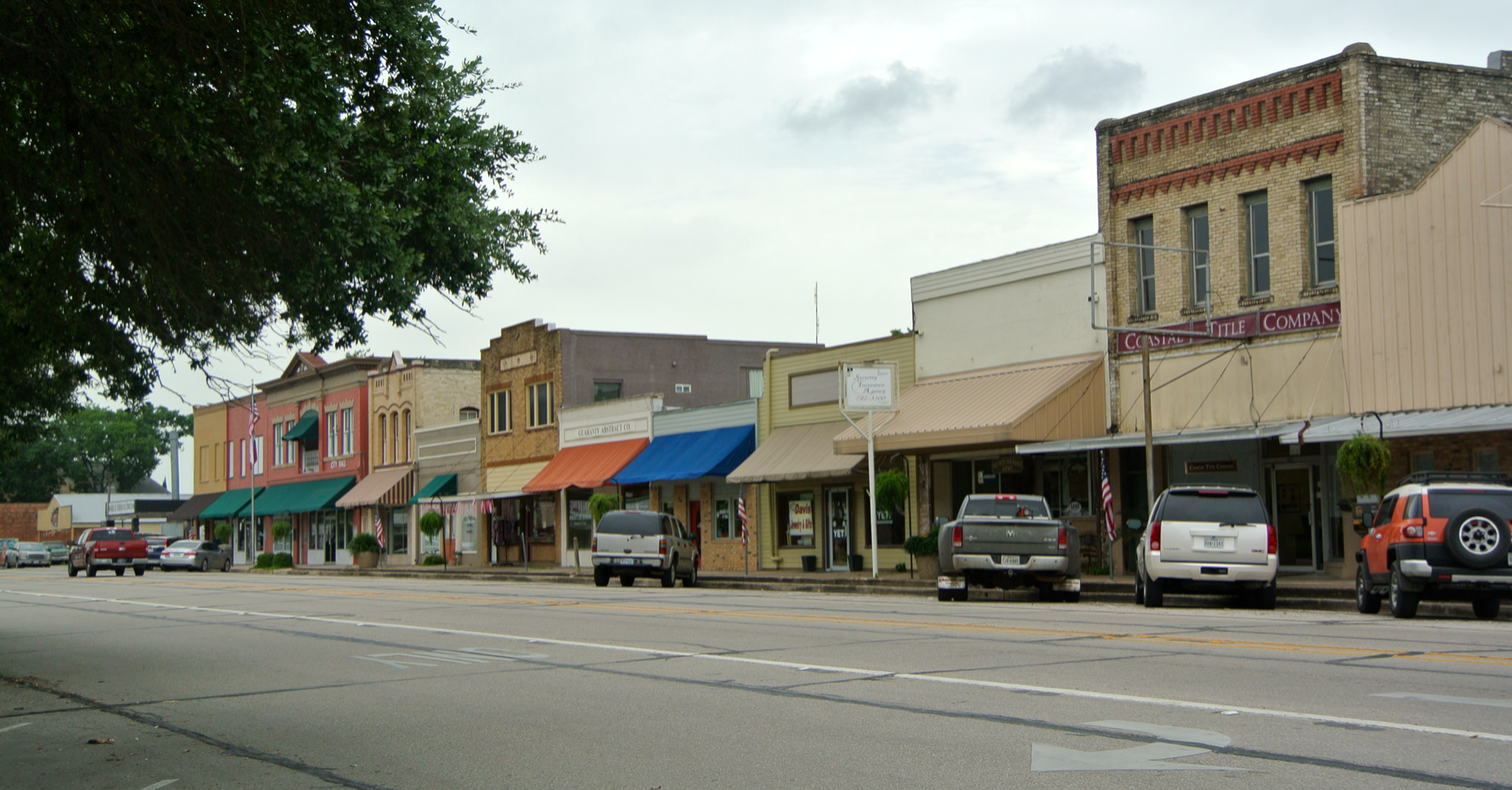 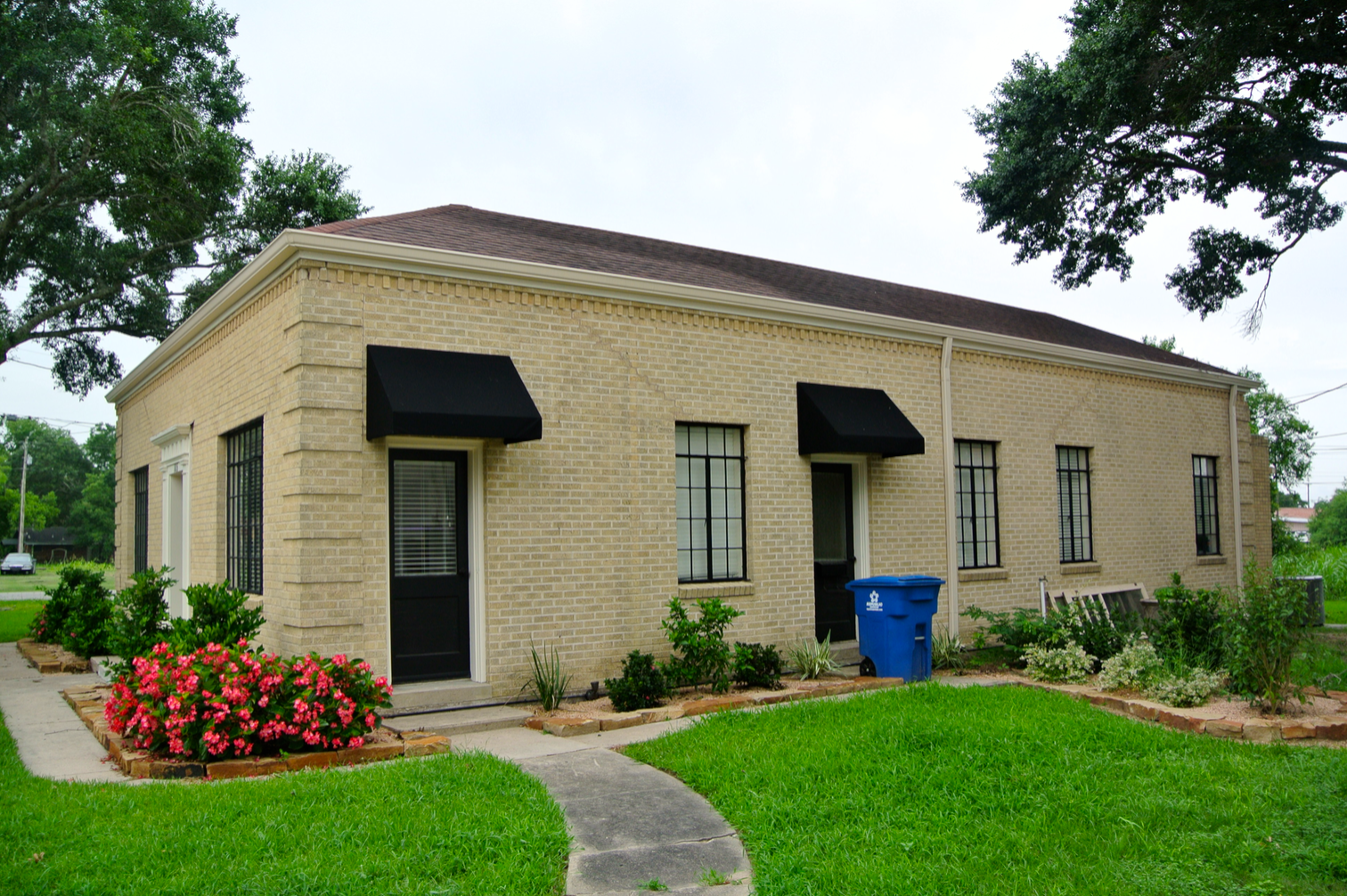 Across from the courthouse, on Ed Linn Street 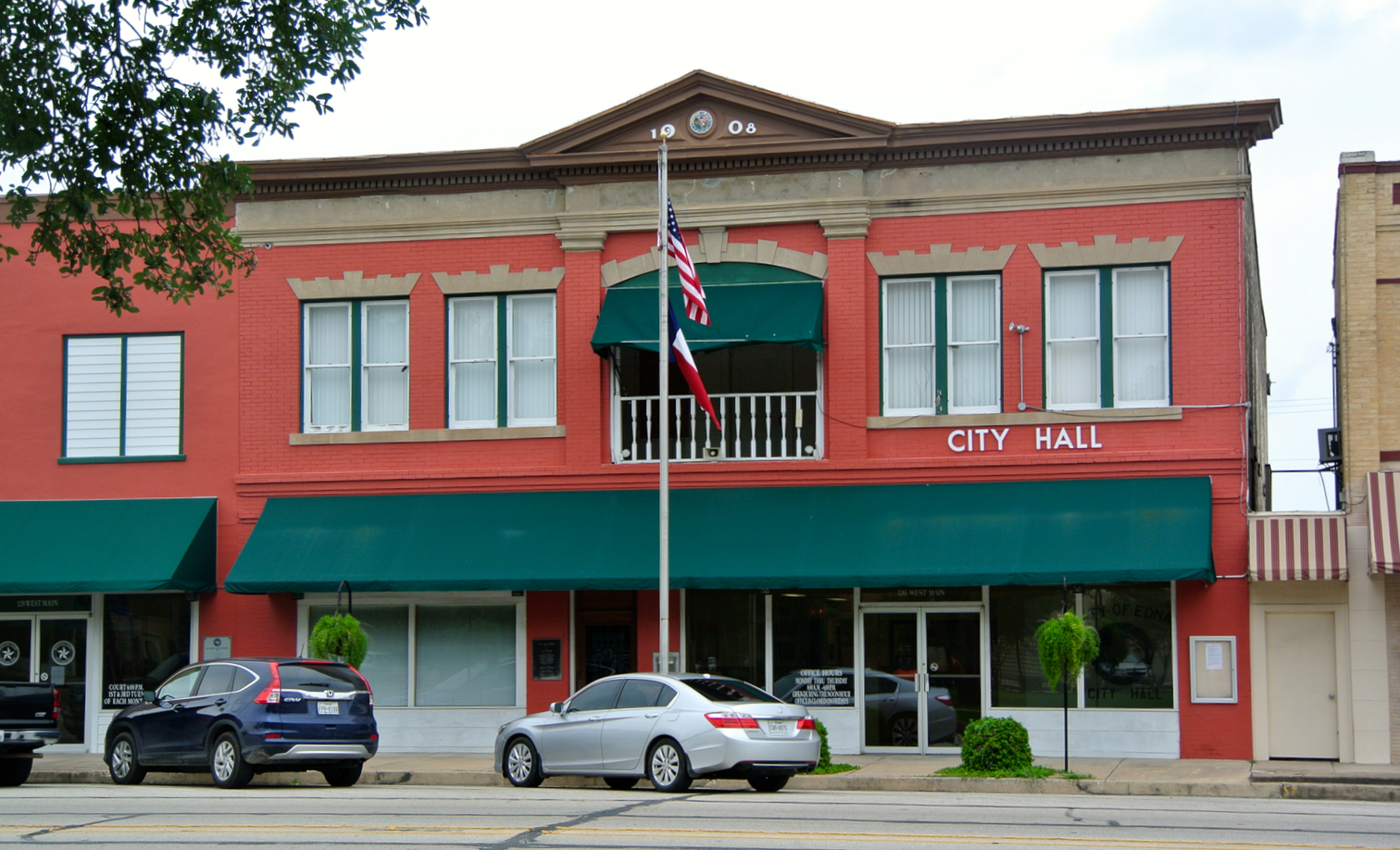 City Hall is on Main. 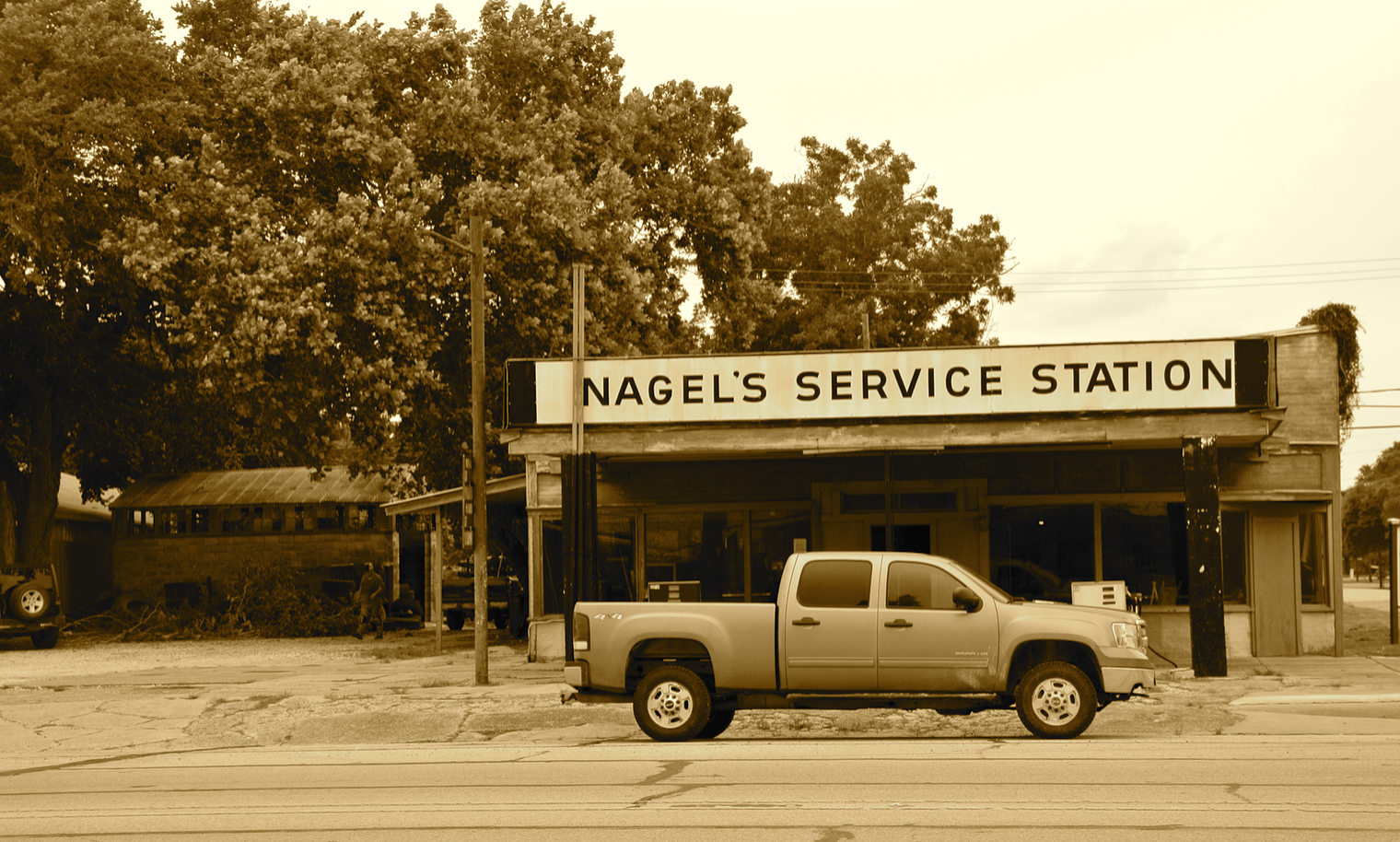 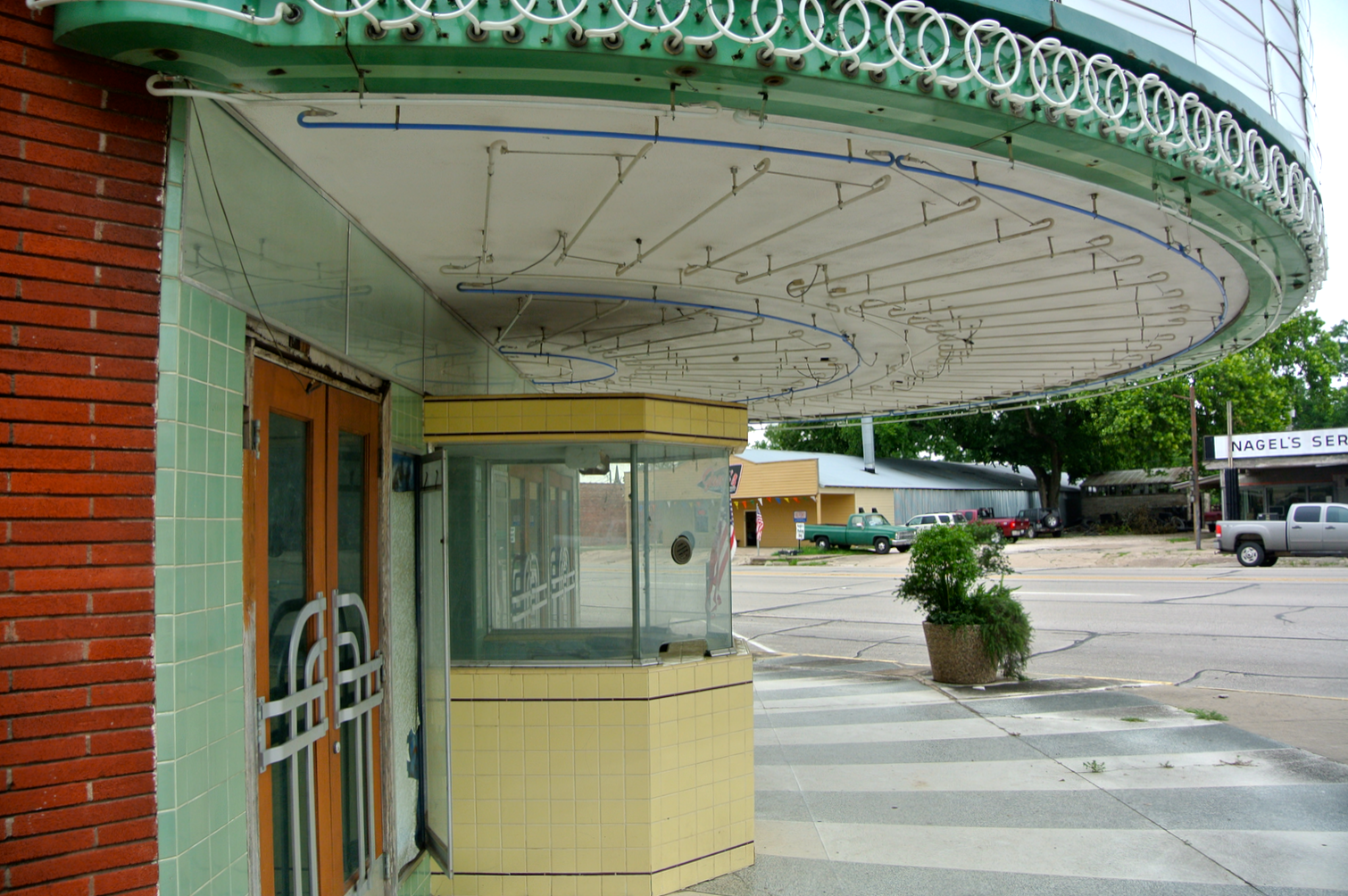 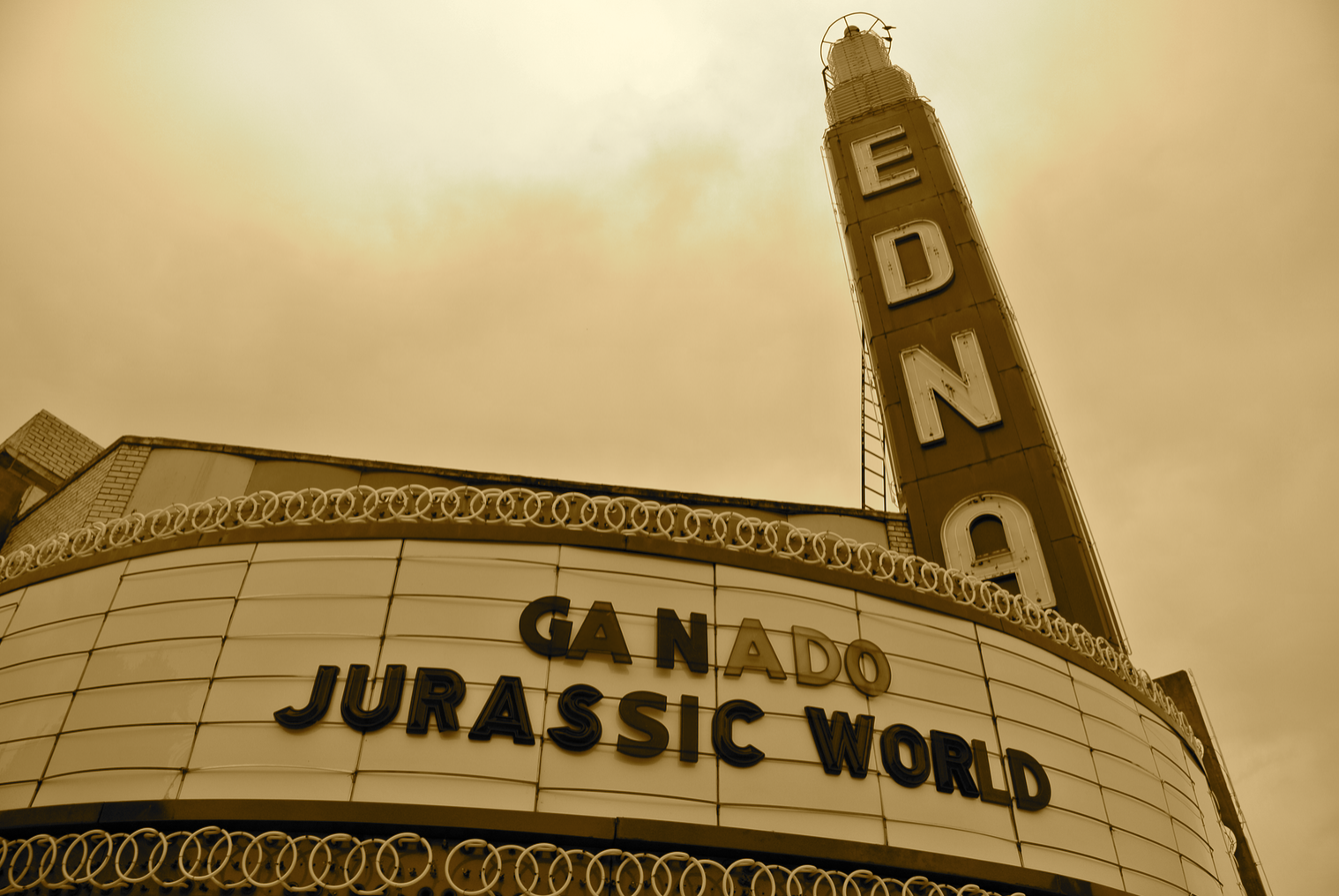 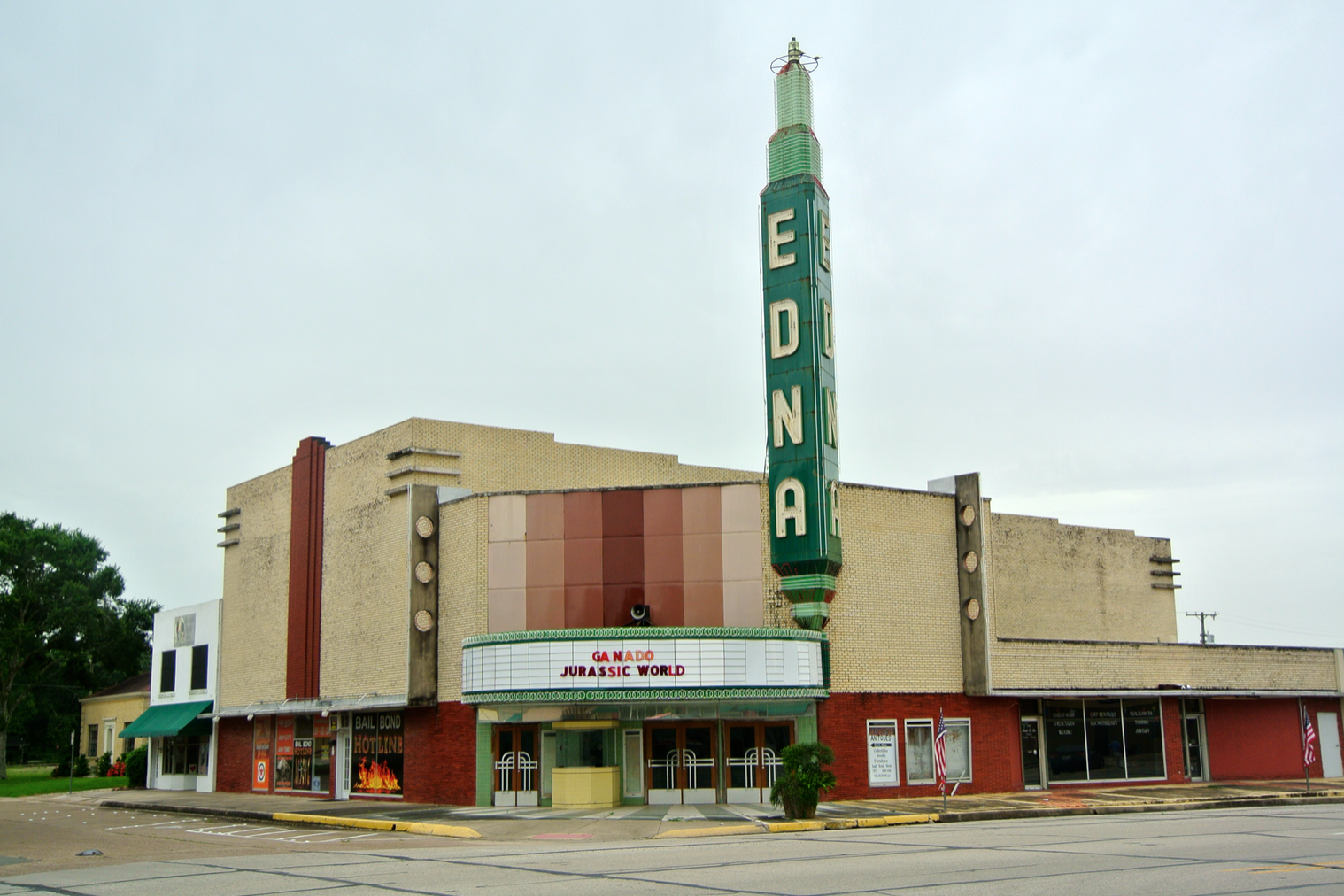