“The county covers an area of 935 square miles in the region commonly called the Hill Country; its elevation ranges from 1,300 to 2,200 feet. The western part of the county lies on the edge of the Edwards Plateau and is characterized by generally flat terrain surfaced by shallow, stony clays and loams. The eastern part of the county, in the Llano basin, is characterized by rolling to steep terrain surfaced by deeper sandy and clayey loans.”

“In the mid-1840s the overflow of German colonists from Fredericksburg and New Braunfels, under the direction of John O. Meusebach, began to move into what became Mason County, risking the dangers of the wilderness for the opportunity to own larger tracts of land. The establishment of Fort Mason in 1851 and the resulting greater protection against Indian attacks encouraged more rapid settlement of the county by Germans, Irish, and English.”

“Mason County was originally part of the Bexar District. When Gillespie County was marked off in 1848, most of the future Mason County was included within its boundaries. On January 22, 1858, Mason County, named for Fort Mason, was established by an act of the state legislature. George W. Todd organized the county on August 2 of that year. The act required that a county seat be established within two miles of the fort, and on May 20, 1861, voters chose the town of Mason for this purpose. The original boundaries of the county have remained virtually unchanged over the years.”

“Mason County grew slowly at first due to the danger of Indian attacks (despite the presence of Fort Mason), and also because of the onset of the Civil War shortly after the county was organized. Most early settlers were farmers, and agriculture centered around providing basic necessities. In 1860 the chief crops were Indian corn and sweet potatoes. Cattle raising was the most profitable business in Mason County from an early date, and ranchers began to stock the open ranges before the Civil War.”

“The county had few slaveowners-the 1860 census reports only eighteen slaves out of a population of 630. German sentiments against secession caused a certain amount of tension between German and American settlers. In March 1861 Fort Mason was surrendered to the Confederate authorities, but it remained virtually unmanned throughout the war, and Indian attacks were consequently particularly severe during this period.” 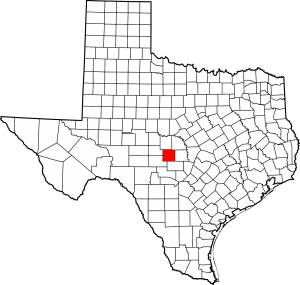 “By 1871 or 1872 ranchers began to fence the ranges, first with native stone and later with barbed wire. The fencing was prompted by disputes with sheepherders and trouble with rustlers. Fence-cutting wars followed this move, and wire-cutting became a prison offense. The so-called Mason County War occurred between 1875 and 1877. It began as a feud over cattle rustling but grew into a conflict between the German and American elements in the community. In 1877 a fire destroyed the courthouse and all early county records, including those pertaining to the feud.”

“Most of the county’s schools were established between 1870 and the early 1900s. Stage and mail routes had passed through Mason since the establishment of the fort. The first post offices in the county were established in Mason and Hedwigs Hill in 1858. The number of post offices increased slowly through the early 1900s. The county’s first newspaper, the Mason News-Item, later the Mason County News, began in 1877.”

“Cattle raising continued to be the chief industry in Mason County. The animals were primarily beef cattle: in the 1890 census, only 5,008 out of 48,687 cattle were reported to be for dairy purposes. During the 1870s ranchers made several unsuccessful attempts to improve the cattle stock by introducing Brahman bulls and later Durhams into the county. In 1882 or 1883 W. E. Wheeler is thought to have brought the first Hereford cattle into the county. These were a big success, and ranchers began to build up their registered stock. Mason County eventually became well known for its Herefords.”

“A number of droughts plagued the county between the 1870s and early 1900s, and in 1886 drought, coupled with a severe winter, paralyzed agriculture and industry. The county court provided assistance to needy county residents, and in May 1887 the county petitioned for state aid. Beginning in the 1890s farmers and ranchers made further efforts to improve farming implements and practices. Bounties on wolves, wildcats, and mountain lions helped rid the county of predators.”

“In the early 1880s manganese was discovered in Mason County, and the Wakefield Company established the Spiller mines twelve miles northeast of Mason. Some iron ore was discovered in 1886, and the following year there was considerable prospecting for coal, as well as interest in gold, silver, and other minerals. The period from 1887 to 1900 saw considerable activity and interest in mineral development. Though some people had dreams of turning the county into an industrial center, development was hampered by lack of a railroad, and most of the minerals were not present in workable quantities.”

“In 1890 a movement began to form a new county out of parts of Mason, McCulloch, San Saba, and Llano counties. It was to be called Mineral County, and Pontotoc was to be the county seat. But the next year, Mason County citizens sent a petition to the Texas legislature that effectively blocked the move.” [My great-great-aunt lived in Pontotoc. I've been through there, and there's not much left. It's interesting to think how things might have been different if Mineral County had become a reality.]

“Although the mineral industry in Mason County never grew to significant proportions, copper, iron, manganese, and other minerals continued to be mined there. Since the 1950s rockhounds have searched the county for a rare form of topaz found there, as well as fluorite, quartz, feldspar, and other stones.”

“Stock raising continued to be the main agricultural business in Mason County. The number of cattle peaked in 1900 at 64,003, declined slightly, and remained fairly steady thereafter, averaging from 40,000 to 50,000. Swine raisingpeaked at 17,888 animals in 1950, but the 1982 census reported only 7,496. Poultry production and dairy products were once significant, but the numbers of chickens, turkeys, and dairy cattle dropped greatly after the 1960s. Wool became a big industry as early as the 1880s, and mohair joined it in the 1920s.”

“The first telephone in the county was installed in Mason in 1902, and within six years there were rural lines throughout Mason County. The 1920s saw the introduction of radios into the county. Although utilities had been slow to develop, during the 1930s there was increased work on rural electrification. Another severe drought in the early 1950s spurred further development of public utilities, especially public water systems.”

“Mason County has long been a favorite area for hunting, especially for deer and wild turkey, and fishing. In the 1950s the county led the state in the annual bag of deer, accounting for 10 percent of the state’s kill. The many historical sites, such as the Fort Mason Museum and the nearby bat caves, as well as the annual county fair and rodeo and other livestock and agricultural shows, also draw tourists to the county. In 2014 the county population was 4,071.”

We know that this was a two-story, rock courthouse and that the local Masonic Lodge rented the second story for a time.

All county records were lost on January 21, 1877, when the courthouse was destroyed by fire.

A two-story, red sandstone, square planned, Italianate courthouse was added to the Mason square in the wake of the fire. Francis M. Carr of the firm Carr & Daniels provided the conceptual designs. 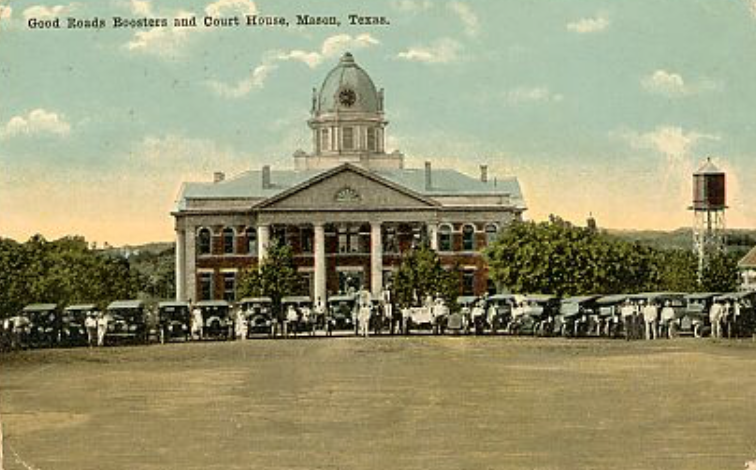 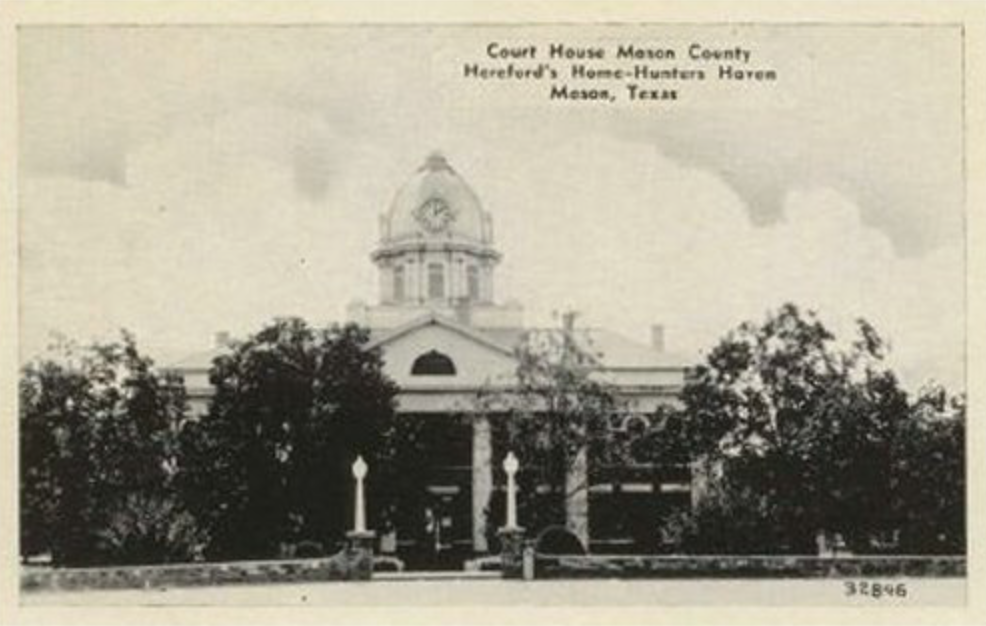 Towering above downtown Mason, this granite, Classical Revival courthouse has truly stood the test of time. So many more of its contemporaries met their brutal ends from fires or demolition crews, but the Mason County Courthouse outlasted them all.

Dallas architect E.C. Hosford sculpted the plans for this building, and the “Mutual Construction Company” put it together. It cost the county $39,796.

An emergency grant was bestowed to Mason County in 2012 for roof and electrical repairs to the building. Those funds totaled $208,994.

The Mason County Courthouse sits at the center of a large city square. This is the northern façade and main entrance, facing Fort McKavitt Street / TX-29. 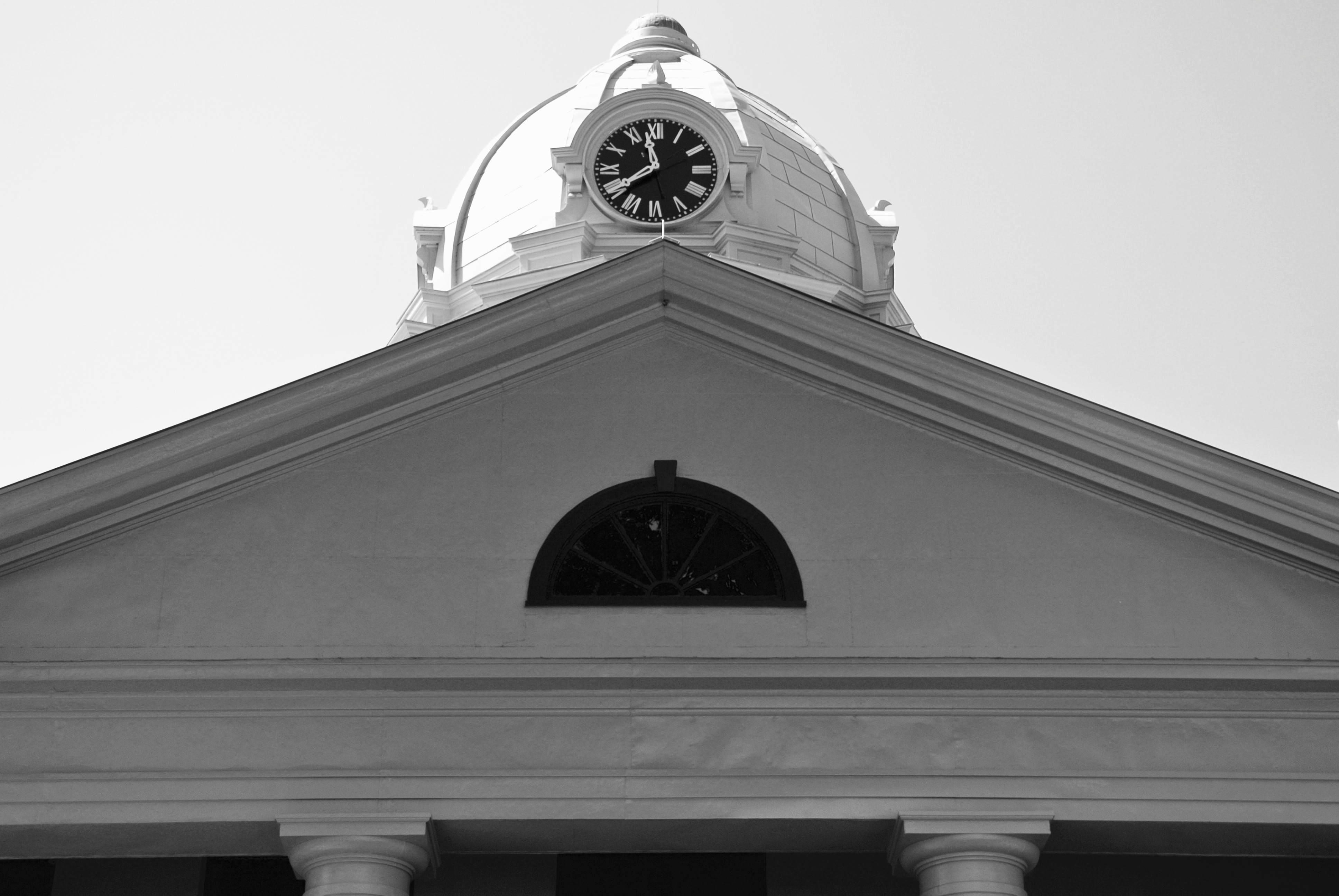 A look inside the main doors

Fort McKavitt Street, as seen from the main entrance

This is the eastern entrance, facing San Antonio Street.

And this is its view.

I’m not sure who this memorial is to, but it’s on the eastern side of the courthouse lawn.

Mason County Law Enforcement, on the southern side of the square

It’s directly across the street from the historic Mason County Jail.

This is the western entrance, on Moody Street. 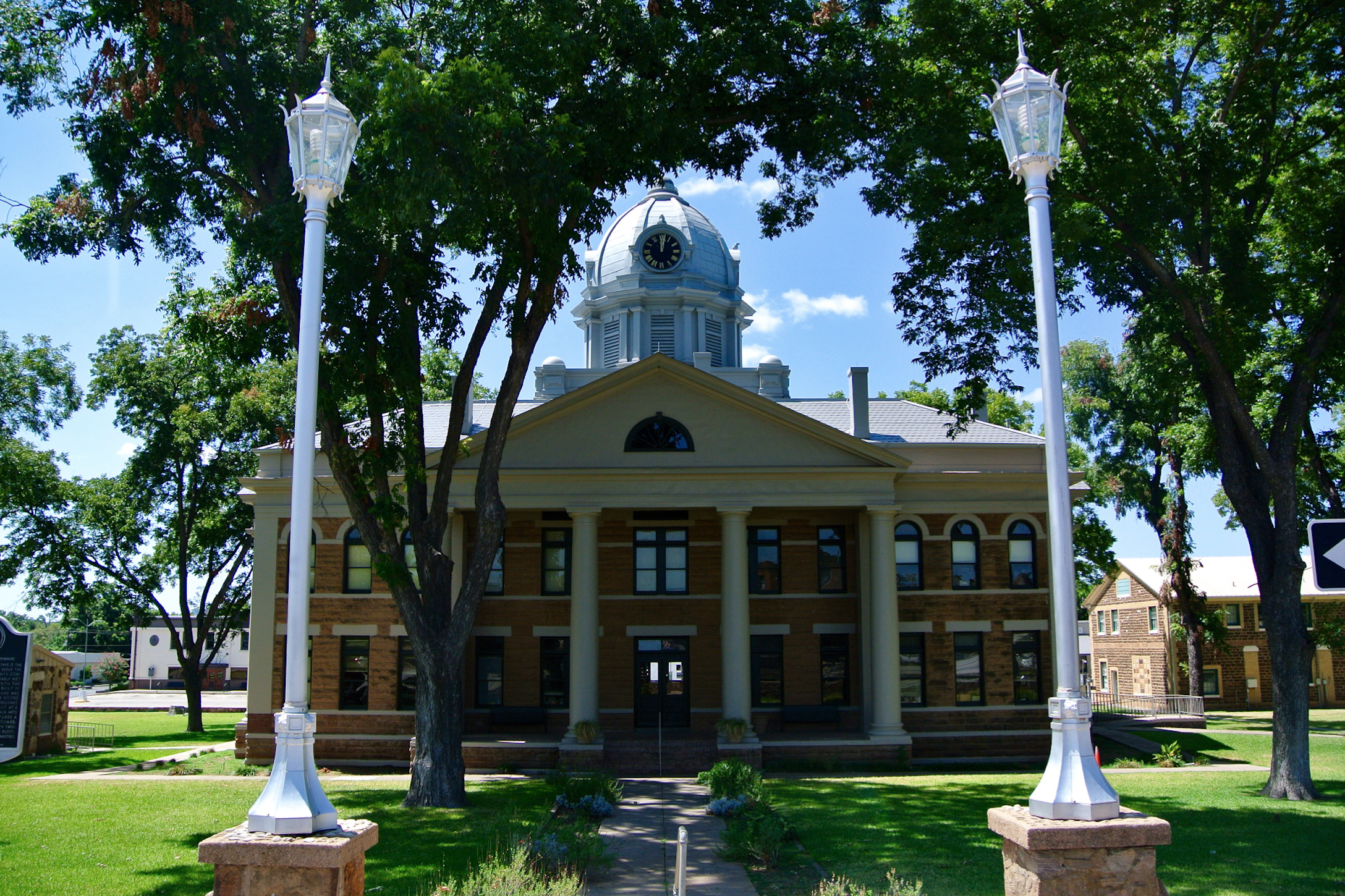 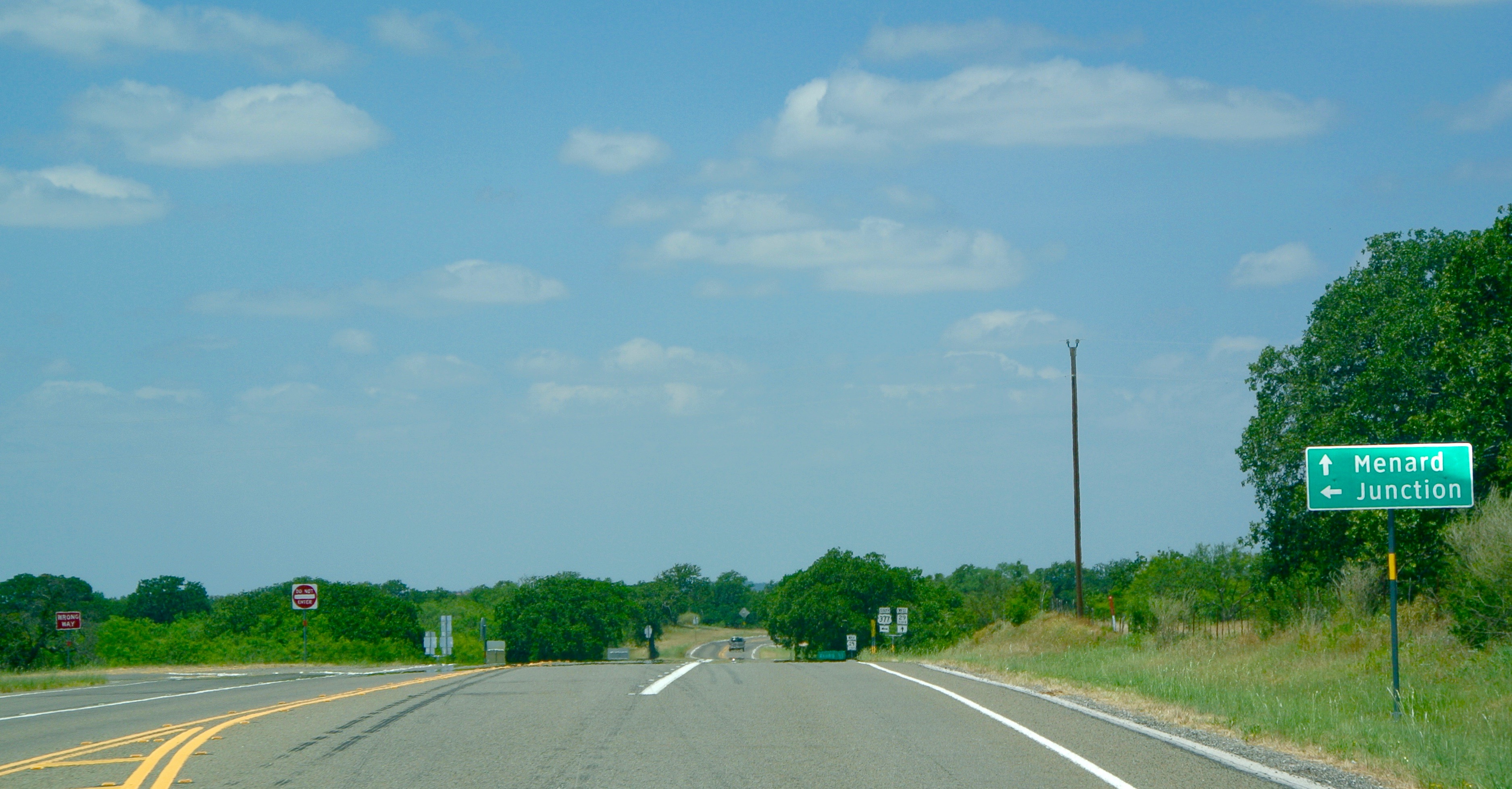