“The present county comprises 1,071 square miles of the Edwards Plateau; elevations range from 1,350 to 2,000 feet above sea level. Traversing the county from east to west, the Brady Mountains form a ridge which is broken by Salt, Cow, and Onion gaps. The surface of the land varies from rolling to hilly, sloping northward to the Colorado River and southward to the San Saba River.”

“The Sixth Legislature formed McCulloch County from the Bexar District in 1856 and named it in honor of Benjamin McCulloch. In the late 1850s a few families came to the Lost Creek area and to the sites of present Milburn and Camp San Saba, but the population remained too small for permanent organization of the county. In 1860 McCulloch County was attached to San Saba County for judicial purposes.”

“Some officials were elected for McCulloch County in the 1860s, and evidence suggests that the Voca and Lost Creek communities were the center of county affairs during these years, but it was not until 1876 that all of the county offices were filled and a county seat was chosen. McCulloch County was not organized in time to have a representative at the secession convention of 1861, and its involvement in the Civil War was limited. Indians, not Yankees, presented the more immediate threat to people who had settled there by the 1860s.” 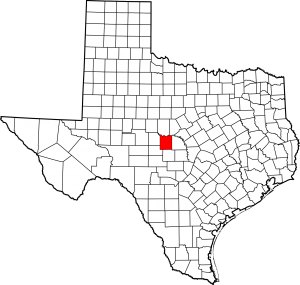 “Extensive settlement of McCulloch County began in the 1870s; most of the growth was from a dispersement of people already living in Texas and the southern United States rather than from an increase in immigration from other countries. The first census of the county, taken in 1870, listed the population as 173; by 1880 that number had grown to 1,533. Nearly 98 percent of the population had been born in the United States; nearly 62 percent were native Texans. Almost all residents were white; the census reported two black residents in 1870 and twenty-two in 1880.”

“As the population of the county increased, so did the number and kinds of religious services available to residents. When communities grew big enough to have more than one denomination, the groups often borrowed meeting facilities until they could build their own. By the 1890s Brady had Methodist, Christian, Presbyterian, and Catholic congregations. Most communities in outlying areas had a small church of some sort that doubled as a schoolhouse and served as the center of social life for those people who could not go all the way to Brady.”

“The county’s early economy was based almost entirely on agriculture. No manufacturing establishments were built before the 1880s. Settlers grew some corn, wheat, oats, and cotton, but stock raising was the primary occupation. The census of 1880 reported 12,437 sheep, 12,264 cattle, and 1,144 hogs on the county’s eighty-seven farms.”

“By 1890 the population of McCulloch County had more than doubled, rising to 3,217. As the county became more crowded, the fencing of open range caused minor difficulties. Local histories record several fence-cutting incidents, but in general the transition to enclosed pastures and farms was made with relatively little violence. The situation was further relieved when the Fort Worth and Rio Grande Railway came to McCulloch County in 1903, eliminating the need for extended cattle drives and giving area farmers and ranchers easier access to markets.”

“The poultry industry grew rapidly from 1890 through the 1930s. Brady’s annual turkey trot drew national attention in the 1920s and was featured on newsreels in theaters around the country. McCulloch County billed itself as “The Turkey Center of the Universe.” The wool and mohair industry began to thrive in the 1920s and 1930s as well, and cattle production remained high. Cotton became a major crop in McCulloch County around 1900.”

“In the late 1930s Brady’s newly elected mayor, Harry L. Curtis, introduced a project to employ men on relief to expand the municipal airport and equip it with lights for night flying. With the increased probability of American involvement in the war in Europe, the War Department became interested in Brady as the site for a training school for young pilots. Brady was declared a National Defense Area, and a new airport facility, Curtis Field, was built on the Brownwood Highway in 1941.”

“McCulloch County had one other military facility during World War II. Construction of a prisoner-of-war internment camp was begun two miles east of Brady in June 1943; the first prisoners began arriving in October of that year. The camp, which covered 360 acres and included about 200 buildings, had a capacity of 3,000. The prison population was made up “troublemakers” transferred from other camps in the United States; among them were members of Rommel’s Afrika Corps, as well as members of the S.S. and the Gestapo (see GERMAN PRISONERS OF WAR). The camp was deactivated in May 1945.”

“No history of McCulloch County would be complete without some mention of the floods that have threatened the area. Records kept for the Colorado River near Winchell on the McCulloch-Brown county line show that the river exceeded its twenty-six-foot bank fifty-six times between 1923 and 1988. The record flood occurred on September 19, 1932, when the river crested at 62.2 feet. Brady Creek in central McCulloch County exceeded its flood stage of eleven feet thirty-seven times between 1930 and 1988, with the record flood occurring on July 23, 1938, when the stream crested at 29.1 feet. Since the construction of Brady Lake in 1963, heavy rainfall has produced only minor street flooding along Brady Creek.” 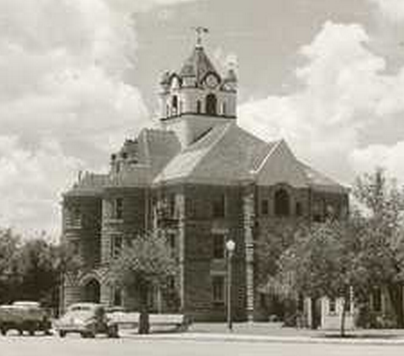 “The existing McCulloch County Courthouse was built by Martin and Moodie of Comanche, Texas in 1899. The three-story building was designed in the Romanesque Revival style and follows the traditional cross-axial plan. On the exterior, the north and south elevations feature twin turrets that flank a low springing arched entrance. The entrance was designed with a pronounced archivolt with a braided design and terminates with a stone botanical motif. The window directly above the entry porch features a filled arched transom delineated by heavy voussoirs. It is likely that the first floor windows originally included Roman arches with pronounced voussoirs, but several have been replaced with cement lintels and limestone. These windows rest upon the water table. A smooth cut stringcourse defines the first and second floors, while a rusticated stringcourse girdles the building between the second and third floors, acting as a sill for the third story windows. Several of the courthouse windows feature cement lintels instead of the original limestone. The east and west entrances occupy projecting pavilions with triangular pediments. The east entrance pavilion features a Roman arch flanked by small rectangular openings. A simple bull’s eye window sits in the center of the second story of the pavilion. The entrance pavilion’s third floor displays a Roman arched window and small rectangular windows on either side, mimicking the same arrangement of the entranceway. Pinnacle shafts decorate the upper third of the pavilion. The arched entryway of the west entrance pavilion has been replaced with a concrete lintel and limestone, and a small window has been placed over the doorway. An ornamental border of diamond-faced cut stone rests upon the second-story stringcourse. The pavilion’s second and third stories feature two sets of three windows; those of the second story are slightly elongated. The corners of the pavilions terminate in pinnacle shafts extending the height of the second and third stories.” – National Register Narrative

Approaching the courthouse on Highway 377 from the south 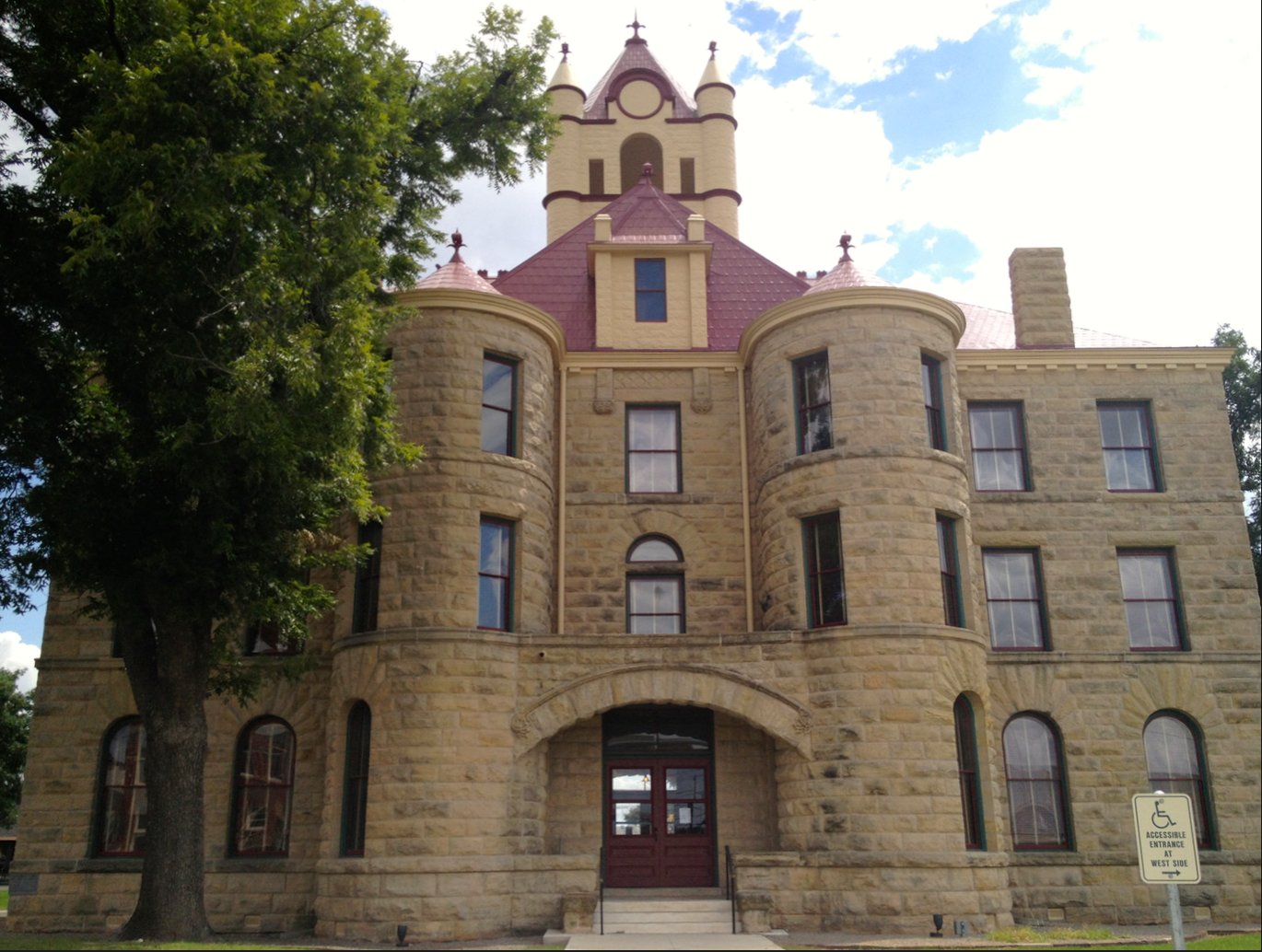 The southern (and main) façade gazes down Highway 377 at its “kingdom.” 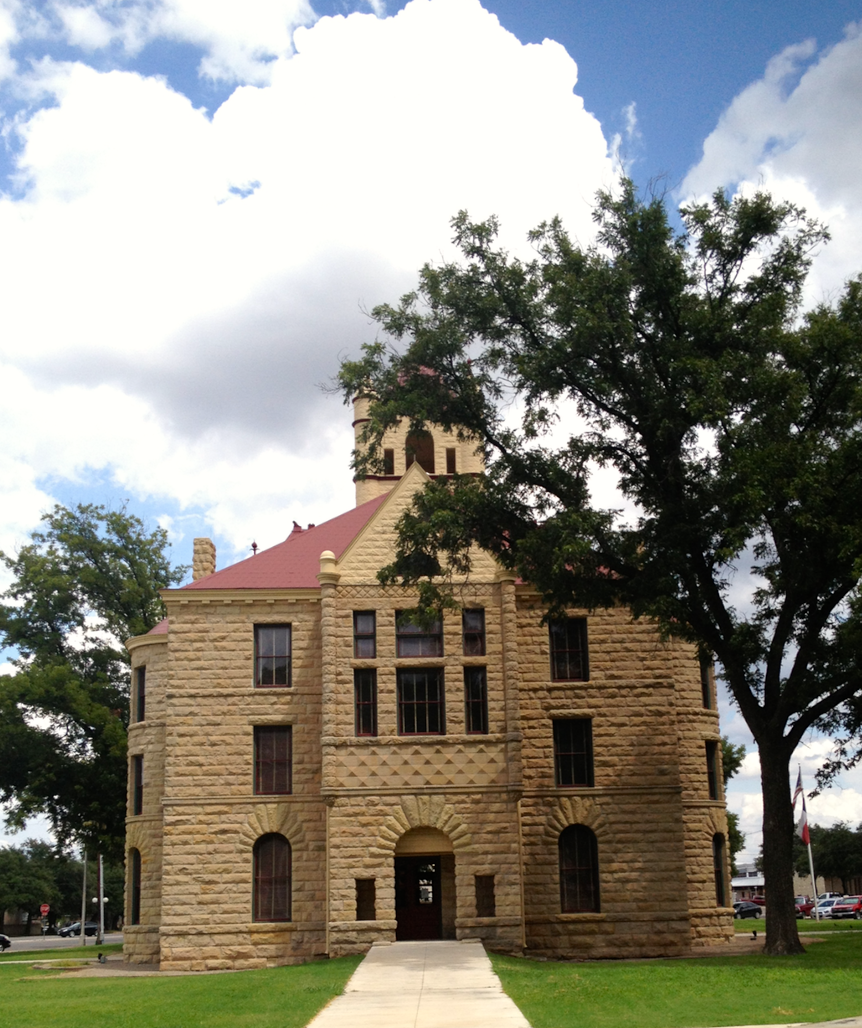 “An ornamental border of diamond-faced cut stone rests upon the second-story stringcourse.” 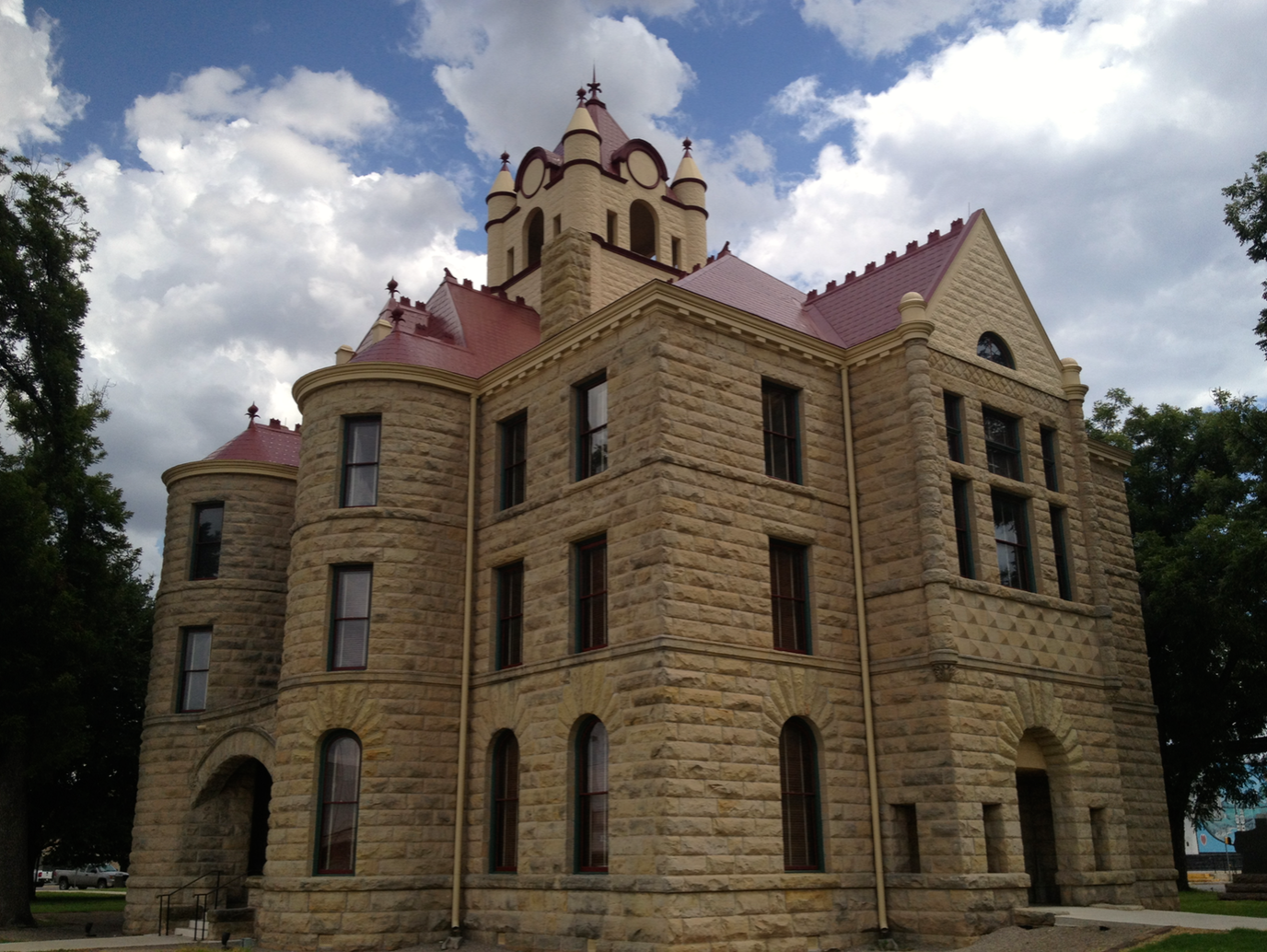 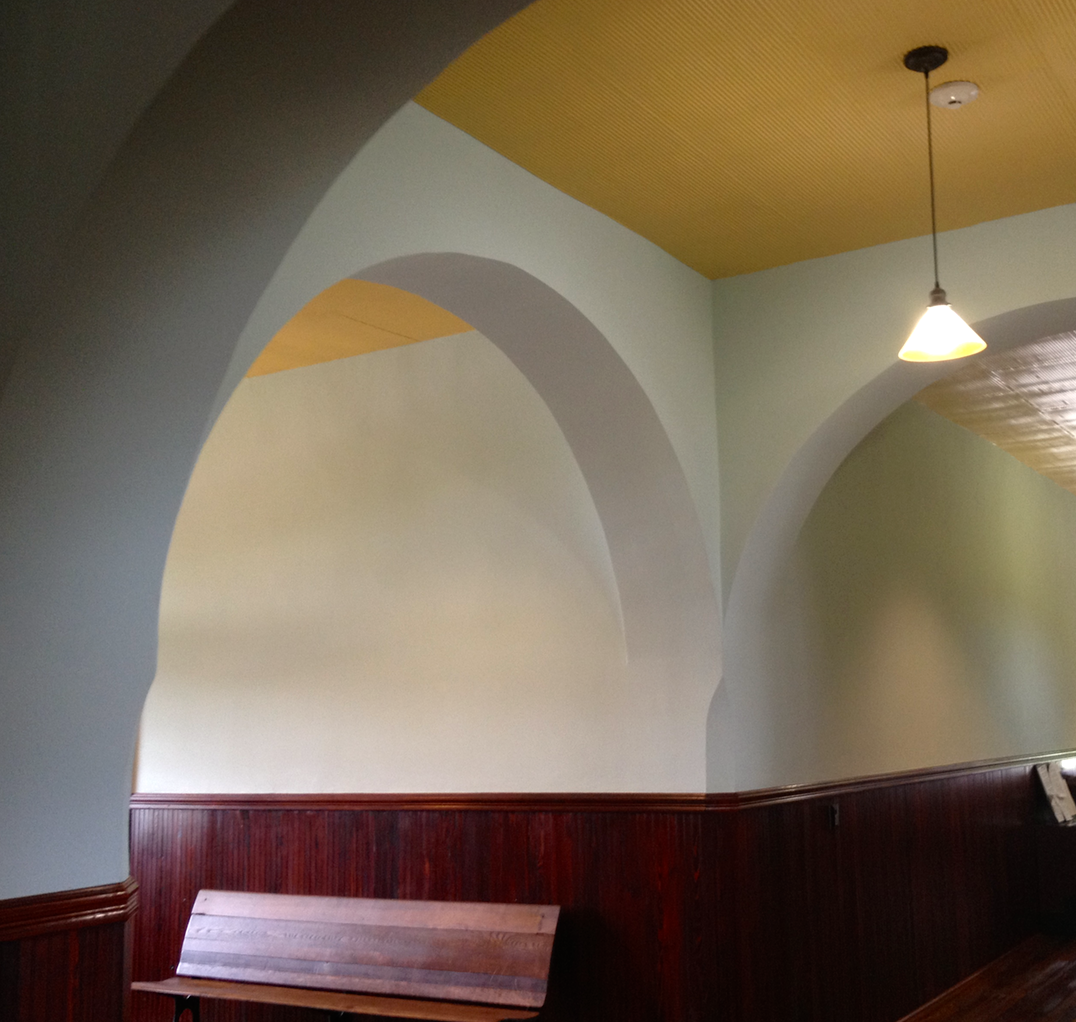 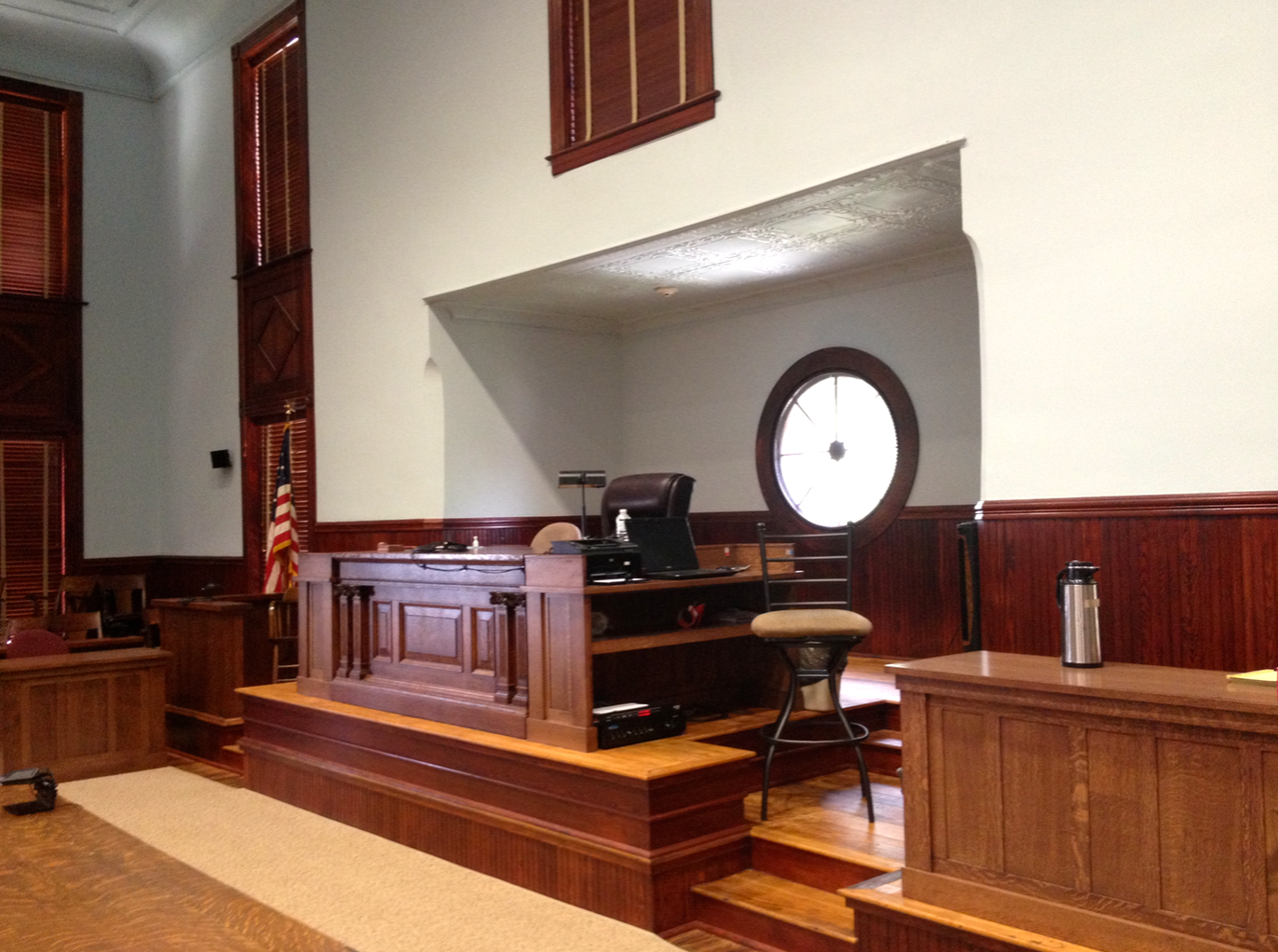 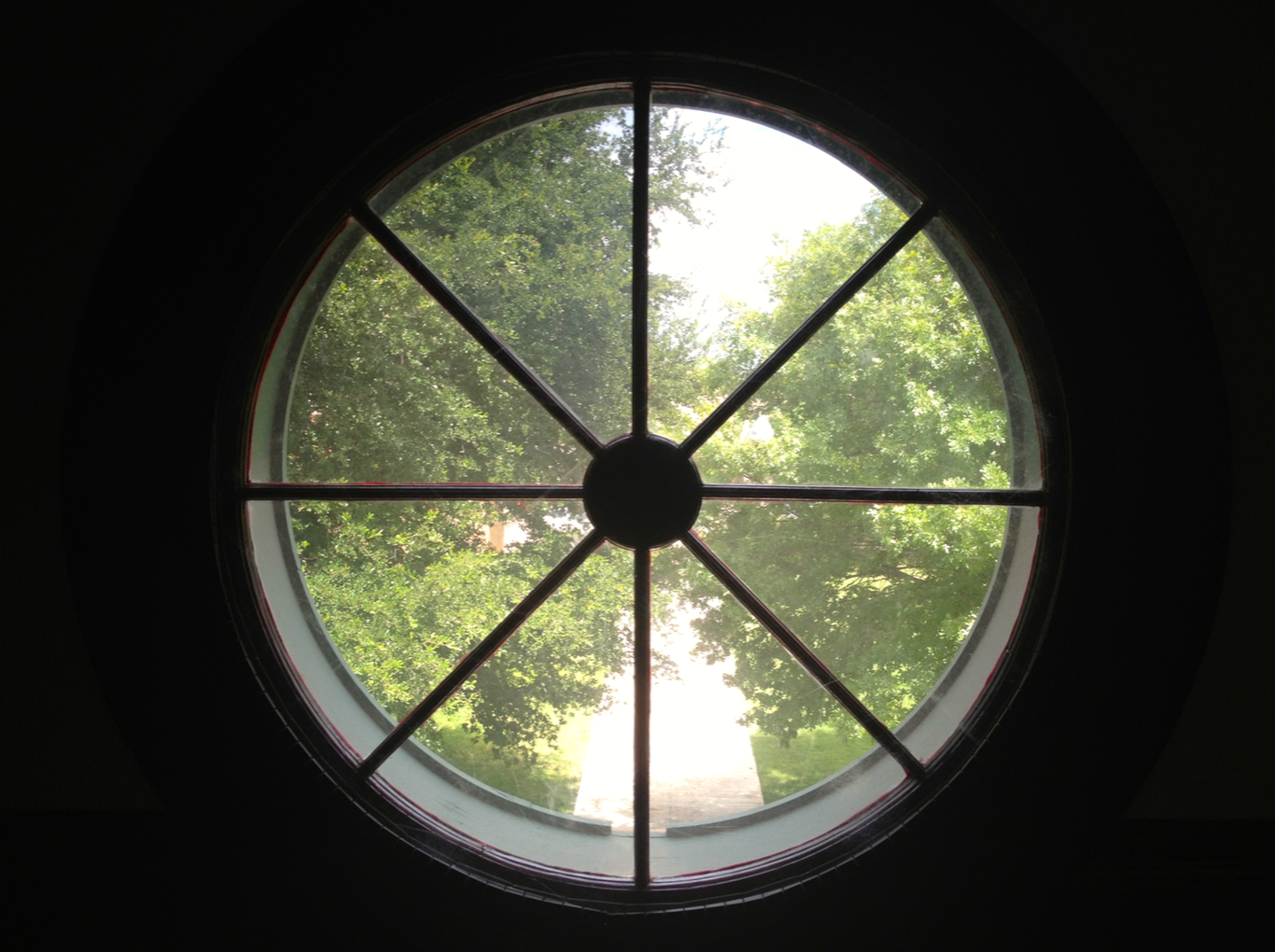 “A simple bull’s eye window sits in the center of the second story of the pavilion.” This window can be seen behind the judge’s seat in the second-floor courtroom. 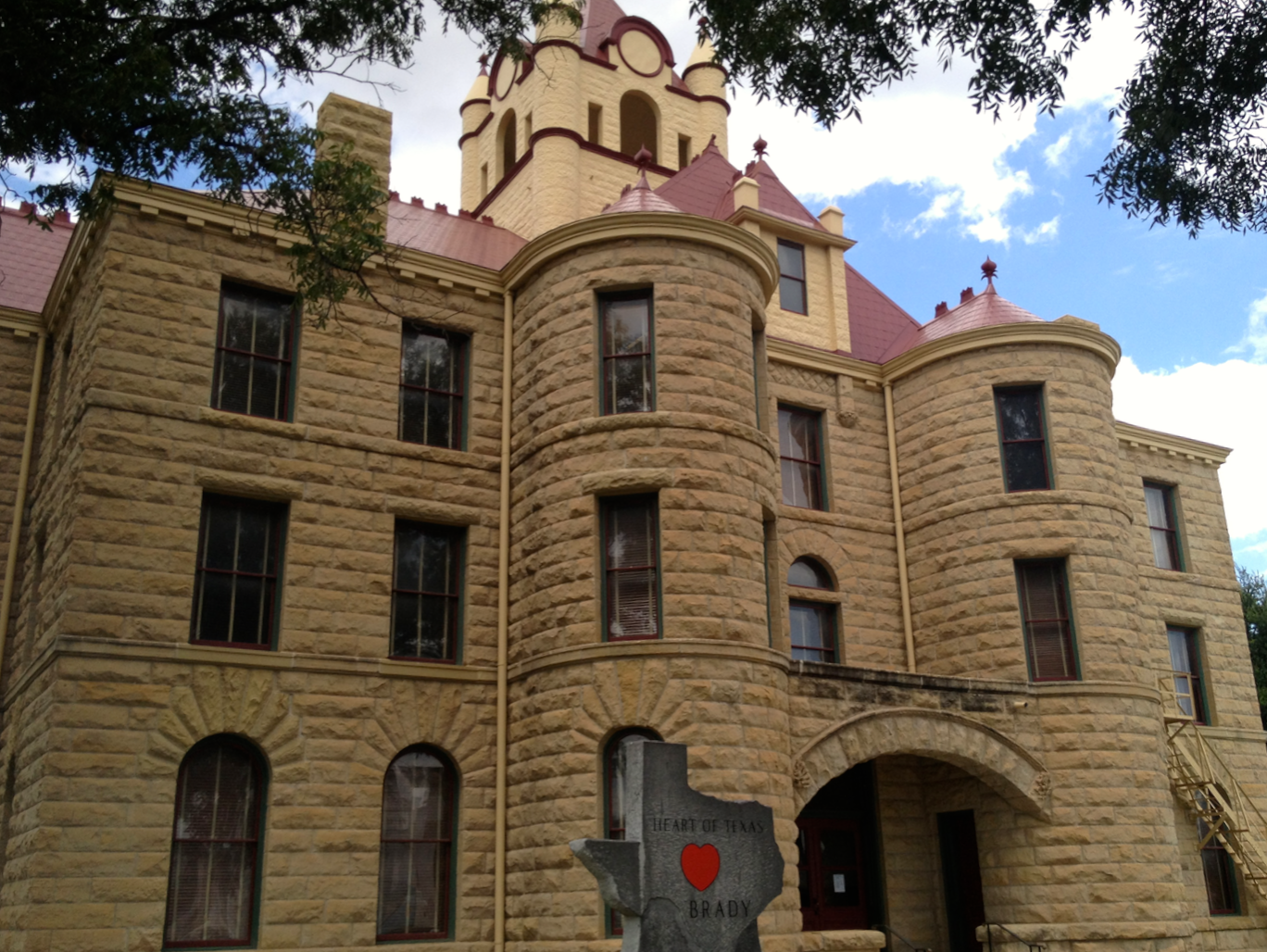 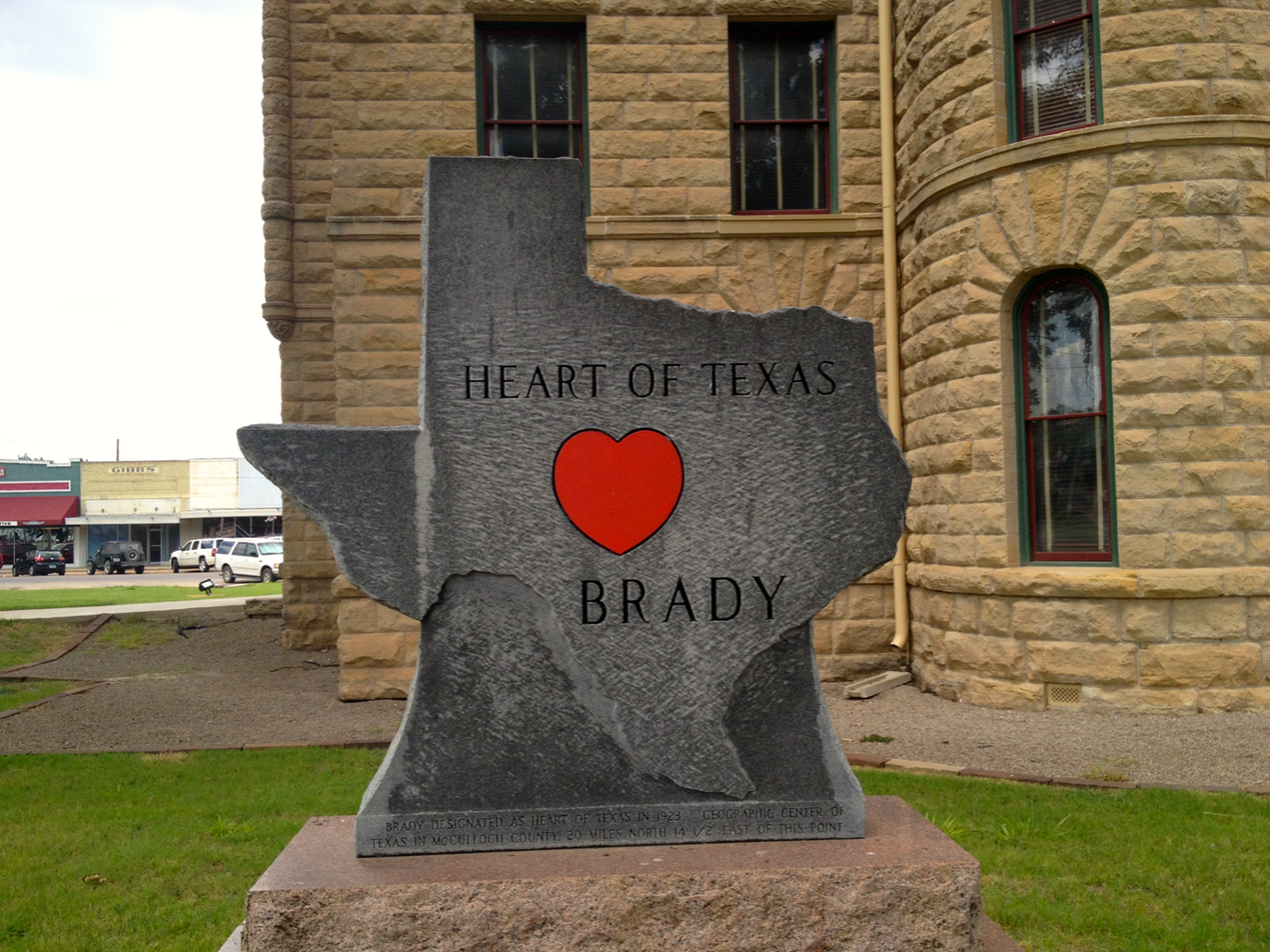 Geographically speaking, Brady is the closest city to the center of Texas.