“The county comprises 902 square miles of rolling terrain on the Edwards Plateau at elevations ranging from 1,700 to 2,400 feet above sea level. The dark, loamy soils are alkaline and support such vegetation as live oak, juniper, mesquite, and grasses. The county lies entirely within the Colorado River basin and is drained primarily by the San Saba River, which crosses the county from west to east.”

“Early Spanish explorers found the Apache Indians in Central and West Texas in the sixteenth century, and the Comanches began moving down from the north in the eighteenth century.”

“The Spanish began exploring the San Saba valley in 1753 and 1754. In April 1757, Father Alonso Giraldo de Terreros founded Santa Cruz de San Sabá Mission, hoping to Christianize the Apache Indians. Though San Luis de las Amarillas Presidio, under the command of Diego Ortiz Parrilla, was established nearby to provide protection for the mission, in March 1758 the Comanche Indians and their allies burned the mission to the ground. In 1761, Felipe de Rábago y Terán, who replaced Ortiz Parrilla, improved the presidio by replacing wooden structures with stone ones. The Marqués de Rubí visited the site during his inspection of Spanish frontier settlements in 1766. Living conditions were poor at the presidio, and after the Indians succeeded in cutting the supply lines Rábago y Terán abandoned it without orders in 1768. The presidio was reoccupied for a short time in early 1770, but the Spanish soon abandoned it for good.”

‘The Menard area was part of theFisher-Miller Land Grant, made by the Republic of Texas in 1842, but few if any of the German immigrants who settled within the limits of the grant came so far west. Little settlement occurred until several years after the annexation of Texas to the United States. In 1852, in order to protect settlers from Indian attacks, the United States War Department established Camp San Saba, later known as Fort McKavett, near the head of the San Saba River.”

“Menard County was formed from Bexar County by the state legislature in 1858 and named for Michel Branamour Menard, the founder of Galveston.”

“1910 Menardville residents offered the Fort Worth and Rio Grande Railroad Company several incentives to extend its track to their town: a right-of-way, the land for stock pens and depot, and $10,000 to build the depot. The track was completed, and in February 1911 the first train arrived. The railroad made outside markets easier to reach, and the town of Menard (as it was now called) boomed; by 1914 its reported population was 1,000.”

The day I came to Menard was one of the hottest days I have ever gone photographing courthouses. 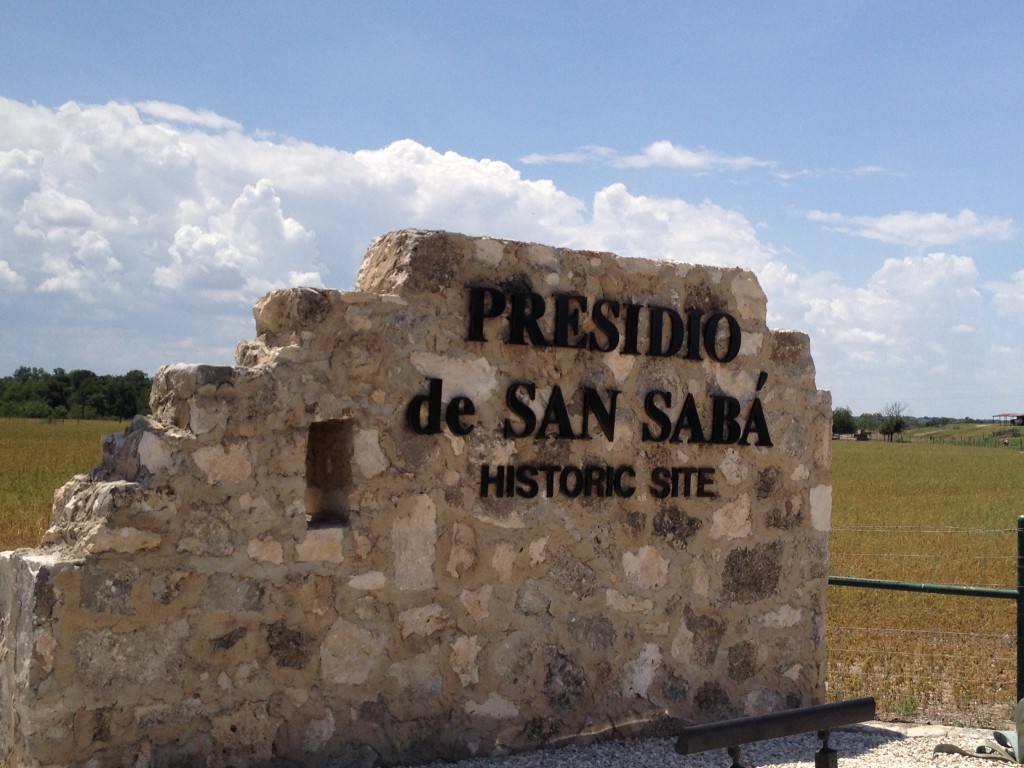 Driving down the highway, my memory of seventh grade history class was reignited when I saw these ruins on the side of the road. As I remembered what happened on this site, I became more intrigued. We turned around. 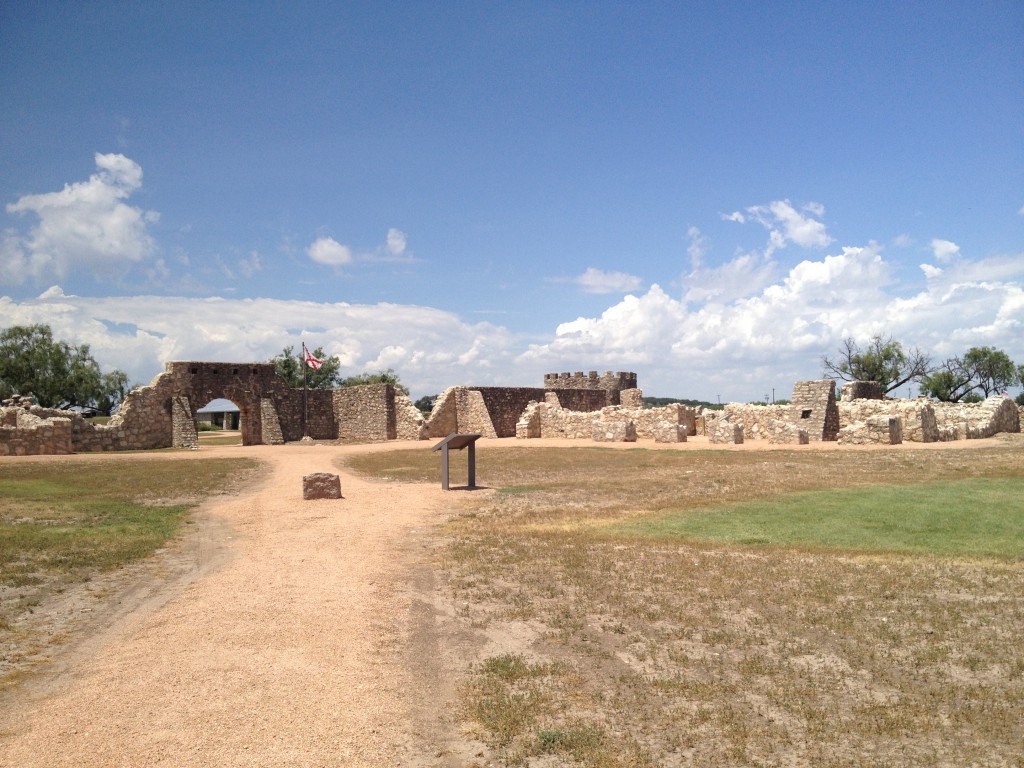 Here you see one of the very few portions of the site that is authentic. It overlooks the San Saba River below. 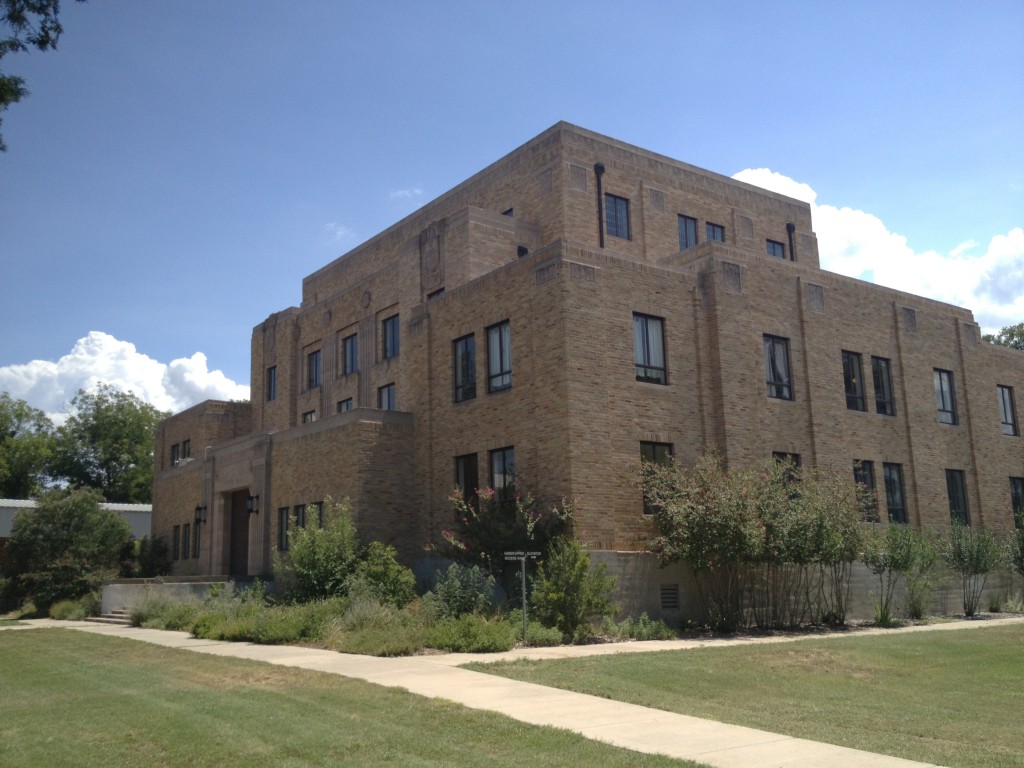 Moving on, we headed downtown to see the courthouse. 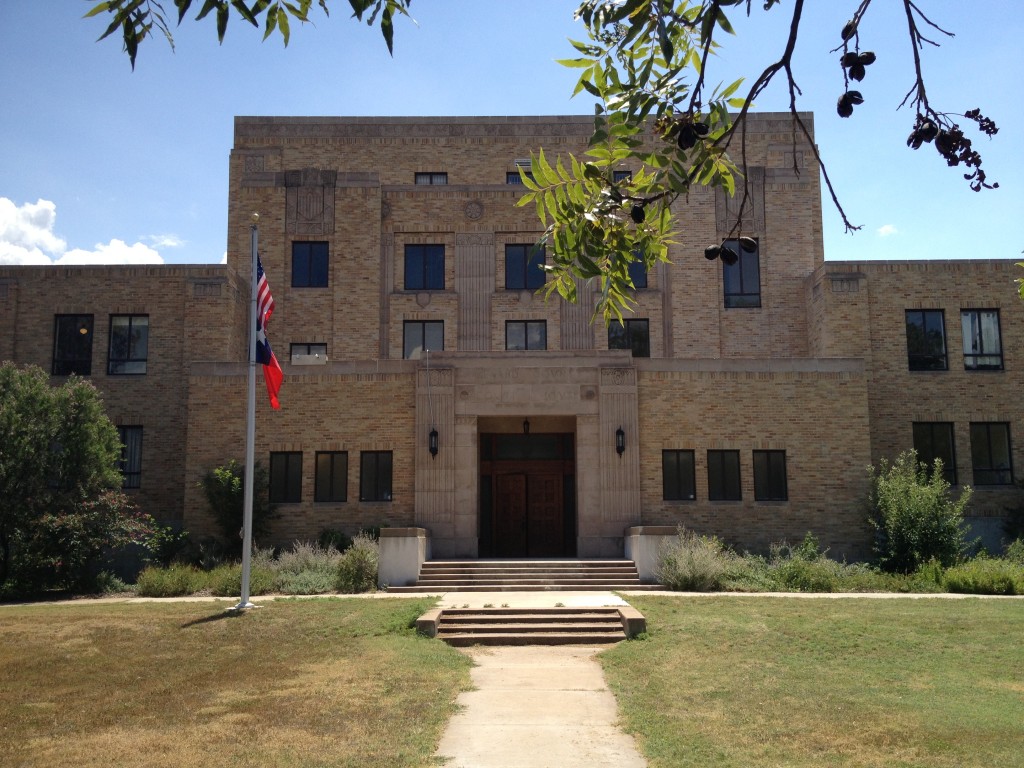 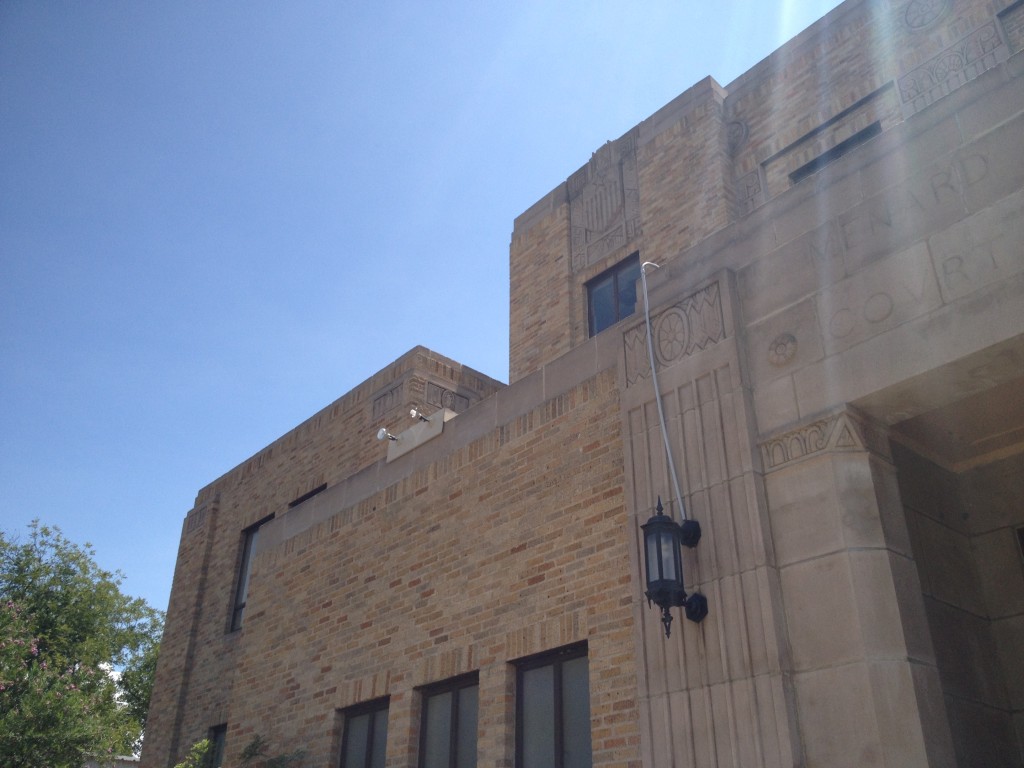 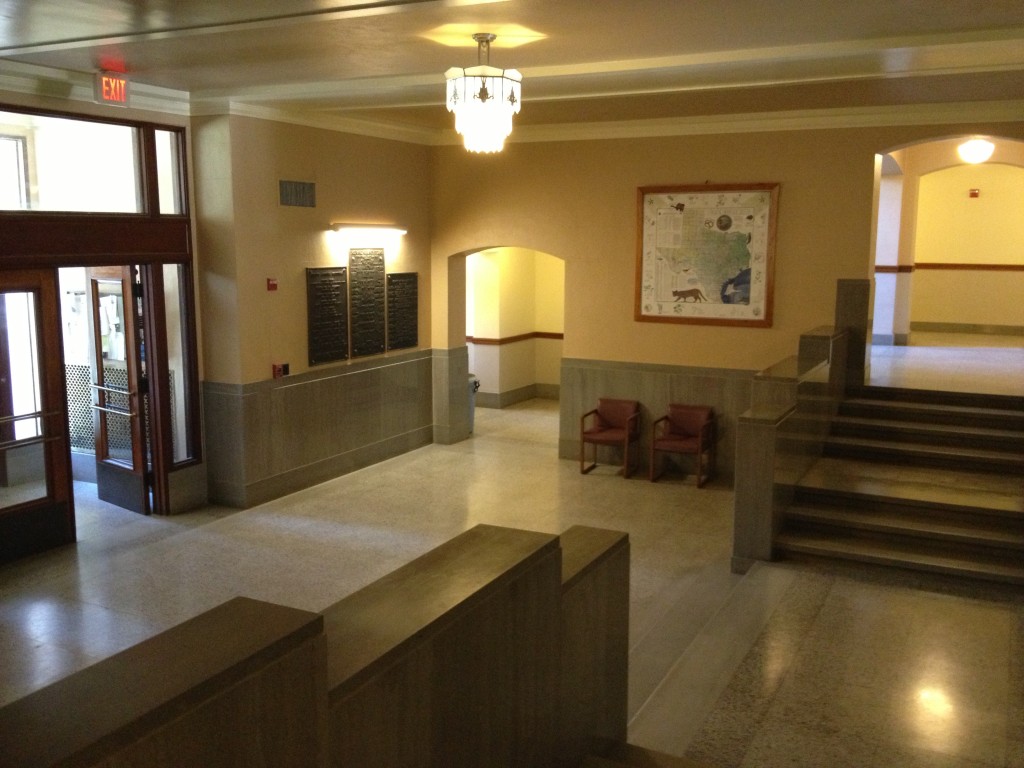 The lobby (seen here) along with both the interior and exterior were restored in a 2006 restoration. 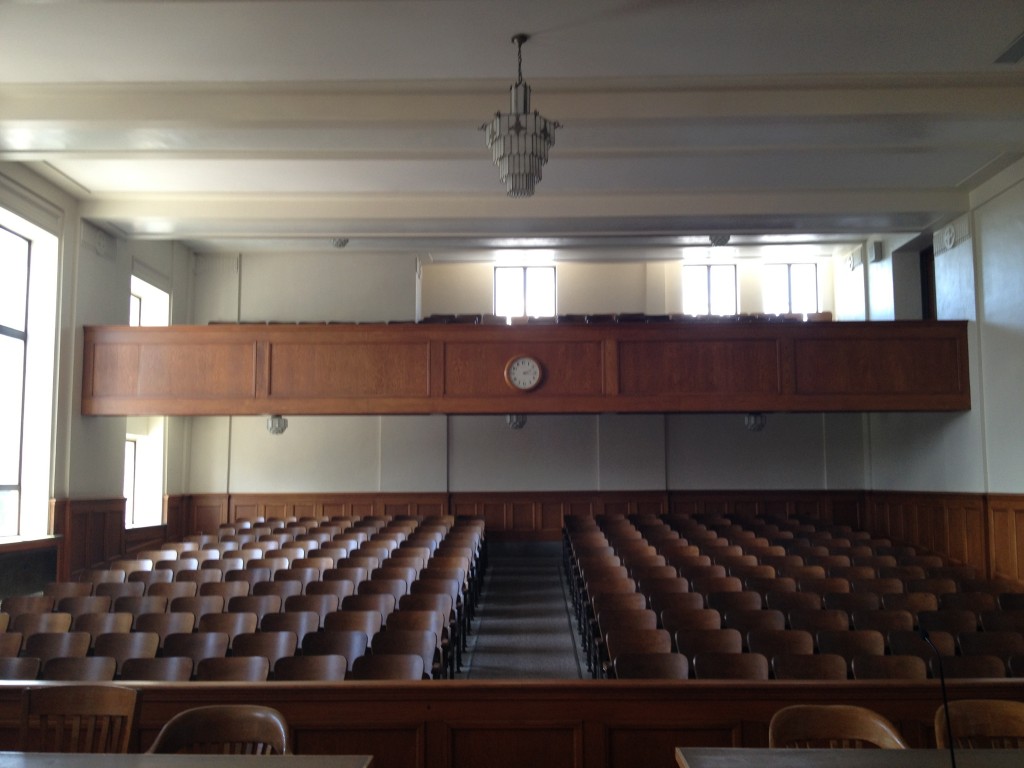 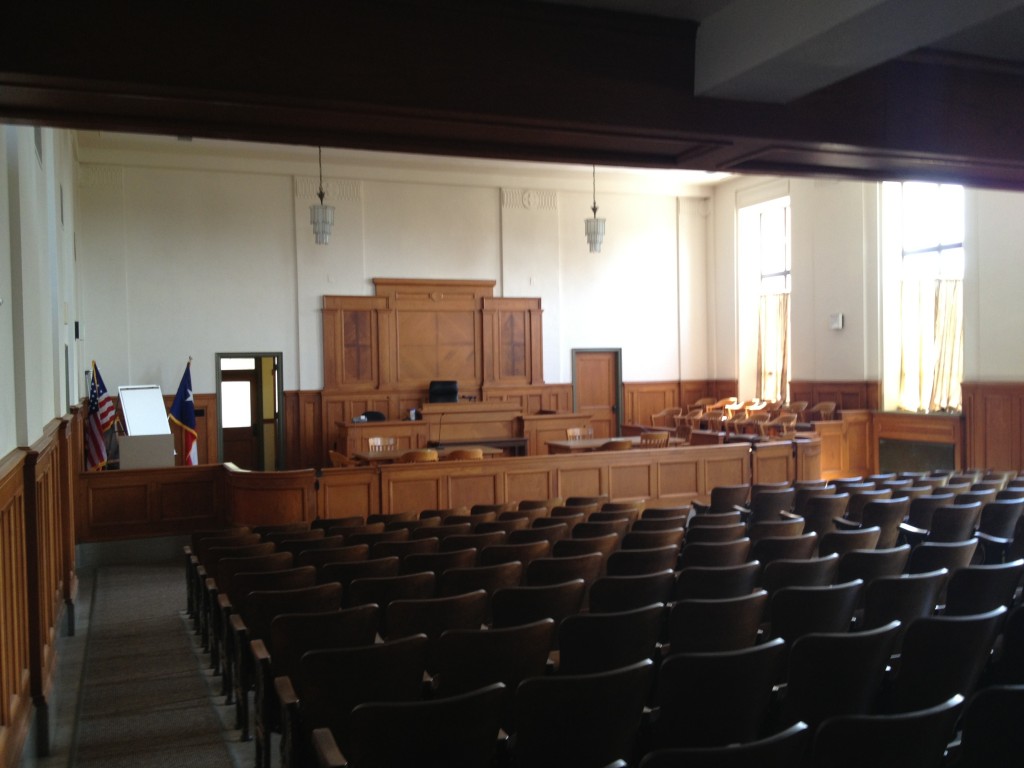 Across the street from the courthouse is a public park. 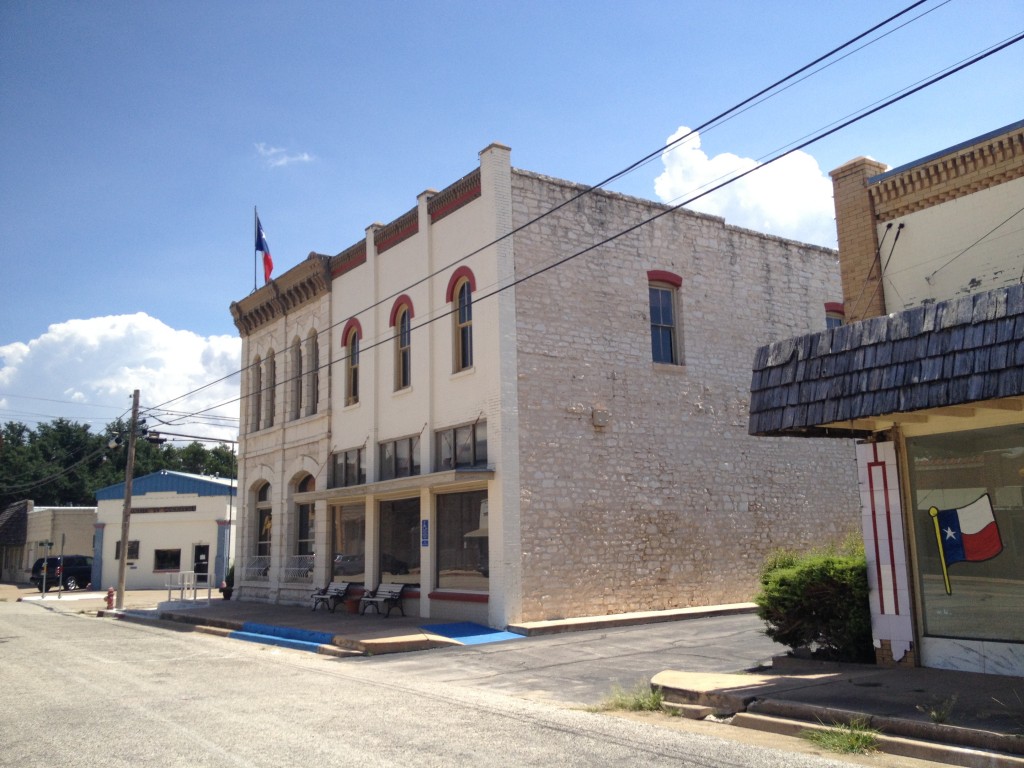