“Orange County comprises 362 square miles of two ecological zones; the Gulf prairies and marshes in the southeastern half of the county and the Piney Woods in northwest half of county. The terrain is generally level and low, with elevations ranging from sea level to thirty feet, and is surfaced by loam over clayey subsoils. Both the Sabine and Neches rivers drain to Sabine Lake, which feeds into the Gulf of Mexico through the Sabine Pass. Sabine Lake, the largest lake in the region, is thirty miles long and twenty miles wide.”

“Native Americans in the area were Atakapan Indians (the “man eaters”). These early inhabitants left shell remains of houses and burial mounds. Much evidence has been gleaned from these sources indicating a hunting, gathering, and fishing culture. Little beside the mounds remain, and by 1908 the population had dwindled to nine known Atakapans in the area.”

“The coastal area that includes Orange County was highly contested during the colonization period. Alonso Álvarez de Pineda, under the Spanish flag, came to the area in 1519 to map the coastline. He named the Sabine River (San Francisco de Sabenas) after the cypress trees he found. Louis Juchereau de St. Denis founded the French colony, Natchitoches, in 1713. To address incursions the Spanish established a number of missions throughout the region. By 1718 numerous French traders had crossed the Sabine and were freely operating. Relations were generally peaceful, and France ceded the area to Spain in 1763 at the Treaty of Paris.” 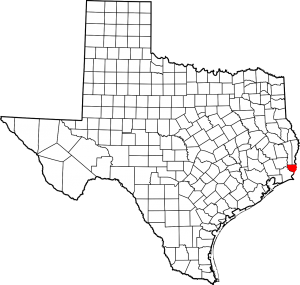 “Louisiana returned to Napoleon in 1800, and he promptly resold it to the United States in 1803. Border disputes between Spain and the United States continued until the Adams-Onís Treaty was signed in 1819, fixing the western border of the United States at the mouth of the Sabine River. Seeking to populate the area, the newly established Republic of Mexico offered generous land grants, and Anglo settlement of the area began in earnest. Joseph Vehlein obtained colonization rights in 1826 for territory between the twenty-ninth and thirty-third parallels. The rights were transferred to the Galveston Bay and Texas Land Company between 1834 and 1835.”

“Orange County was carved from Jefferson County on January 5, 1852, and its county seat was located at Madison. Confusion with Madisonville prompted the name change to Orange in 1858 at the time of the town’s incorporation. Orange had been known by a variety of names; Strong’s Bluff, Huntley, Green’s Bluff, Jefferson, and Madison. Most sources cite the orange grove planted by early settlers at the mouth of the Sabine River for explanation of the town’s name. County growth centered around Orange. Because of its proximity to the Gulf and serving as gateway to Texas and the West, the city quickly developed as both a maritime and cultural center.”

“Orange mustered several military units during the Civil War, including the Orange Greys and the Orange Light Guard. A nearby naval encounter in 1863, the battle of Sabine Pass, successfully halted the Union army’s advance into Texas. Orange survived the war intact but was decimated only five months after the armistice, when a major hurricane hit the town on September 13, 1865. The county population in 1870 dropped to 1,255. The Texas and New Orleans Railroad, which had arrived in Orange in 1861 and then closed during the war, began operating again in 1876.”

“The opening of Lutcher-Moore Lumber Company began the slow, but steady rebirth of the area. County population grew to 2,938 by 1880 as jobs became available in lumber and related areas, including building construction and ship building. In 1881 C. P. Huntington brought the Southern Pacific to Orange, forming a direct route from San Francisco to New Orleans. Orange became a major rail and port center.”

“Manufacturing became a major contributor to the local economy as establishments increased from eight in 1880 to twenty-seven in 1890, the largest percentage increase on record. The Orange Rice Mill was formed in 1901. The Yell Mill (Equitable Bag), the only mill in the world that used yellow pine shavings as a raw product, followed in 1904. That year county population was 5,905, and expectations for the future remained high, despite the knowledge that the once abundant surrounding forests were becoming depleted.”

“The Great Depression marked a very difficult period for Orange County. The population remained relatively stable (15,149 in 1930 to 17,382 in 1940), but industrial establishments declined to twenty-five by 1930 and employed only 938 workers. By 1940 the figure had fallen further to sixteen manufacturers and 527 employees. World War II and its defense needs led Orange County to a recovery. Shipbuilding, long a local staple, but moribund since 1918, reached new heights. The population more than doubled to a record 40,567 in 1950, and manufacturing activity grew to thirty-three establishments employing 3,835 by 1947.”

“Crayfish, also raised commercially, were featured during the annual Gumbo Cookoff held each May.”

The successor to a single room, wooden framed structure of 1853, the 1884 courthouse stood two stories. It was built using pine wood and bricks (to construct a vault indoors). In the 1890s, Orange County determined its growth had exceeded beyond the confines of this structure and put out a search for architectural bids.

Like county officials, Mother Nature must have also had enough of this building. One month after one of the bids was accepted, a fire struck this courthouse and burned it to the ground before any demolition could take place. The brick vault (and county records) managed to survive. 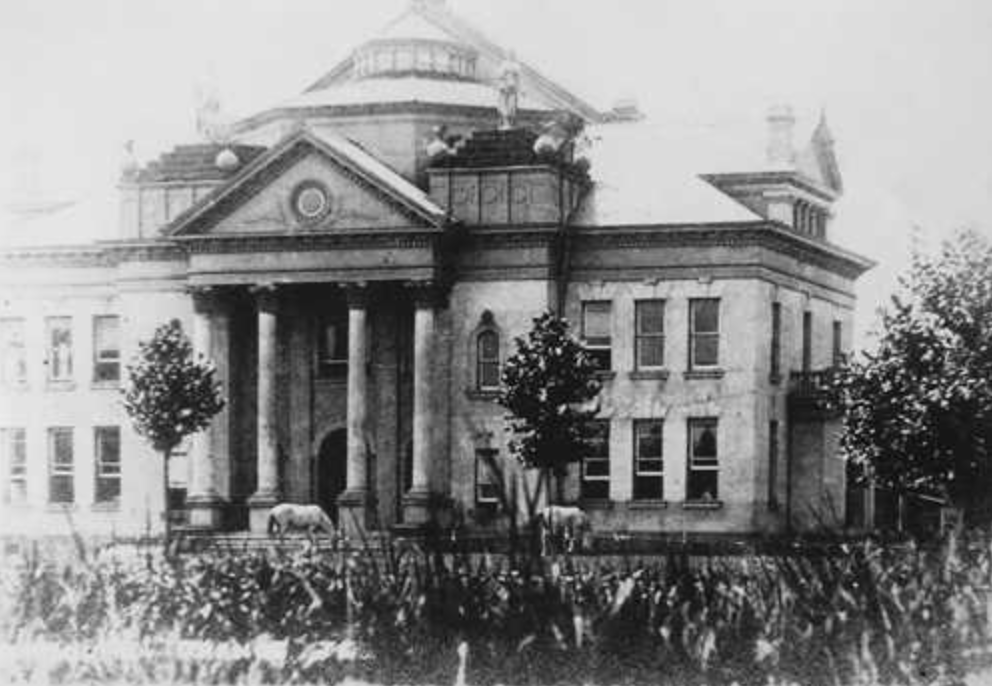 This was an impressive, Classical Revival building designed by F.S. Glover of the Houston firm Glover & Allen. The contractors who served were an M.A. McKnight & F.W. Robinson. Their work  cost the county $28,300.

Although not visible in this particular image, records indicate that the rear of the building was similarly arranged to the impressive designs of John Riely Gordon. Glover may very well have been influenced by Gordon since both men were operating at the same time in history.

By the late 1930s, the county had presumably outgrown this space as well. A fourth courthouse was created in 1937. The “cause of death” for this building is unknown to me, but I assume it suffered the effects of a hurricane. That story makes the most sense to me because this building was still standing for at least two years more. In other words, it wasn’t demolished to make way for its successor. Perhaps a storm had ruined it beyond repair.

And yes, those are horses you see on the courthouse lawn. Times have surely changed.

Built from light bricks and granite, this three-story, Moderne courthouse was designed by the C.H. Page and Bro. firm. The curiously named Falbo & Falbo served as contractors.

What I find fascinating is that this courthouse was constructed with funds from FEMA. To me, that alludes to the fact that the previous one was destroyed by a natural disaster. Of course, I could be wrong, but if that’s the case, what an intriguing story (and one you can only find here on the Coast).

The main façade faces directly north towards the intersection of 7th and Division Streets.

This is the sparsely crowded view of that junction.

The main walkway is lined with orange trees. It’s only fitting. 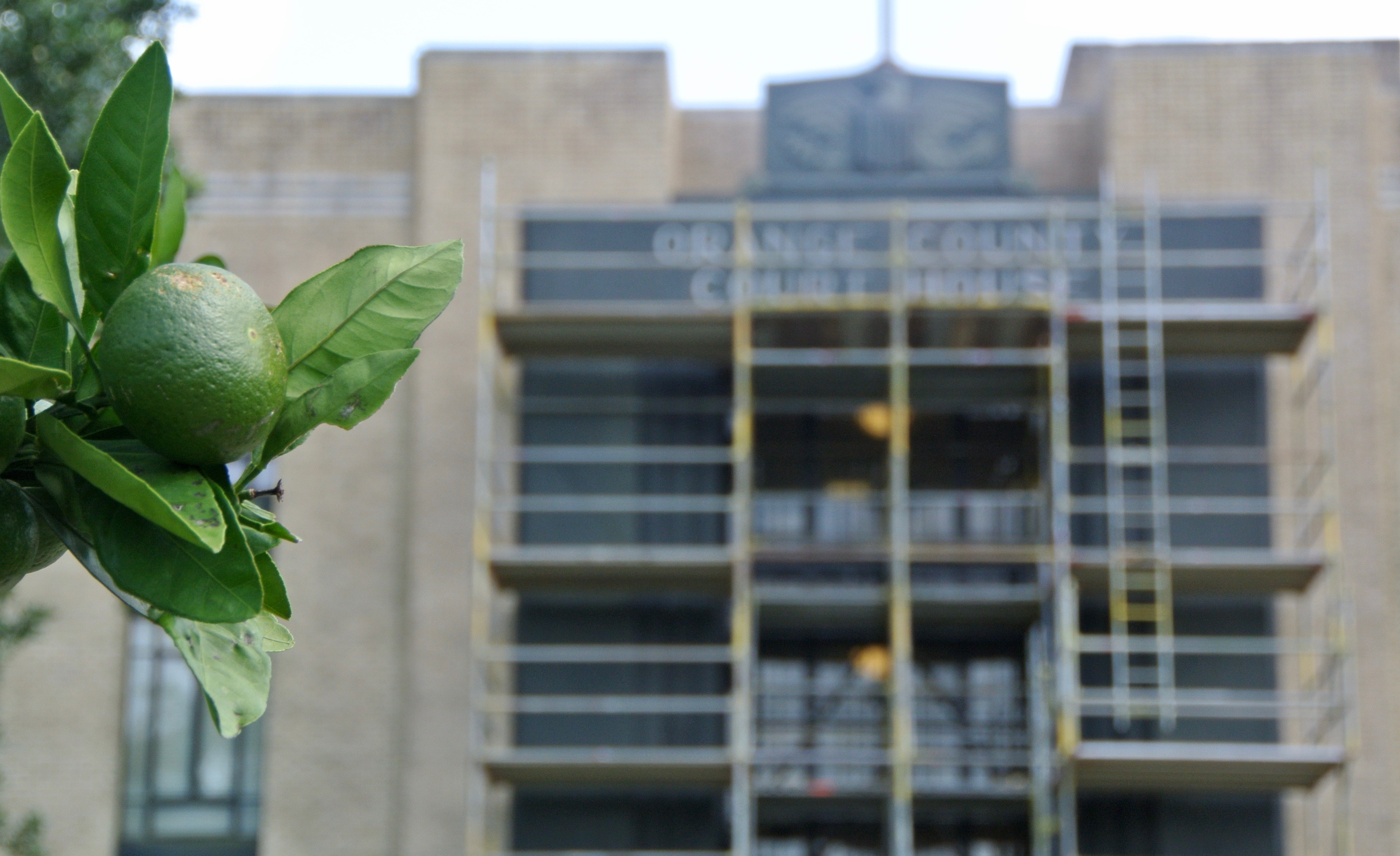 To either side of the building are modern wings from 1962.

There was a bit of unfortunate renovating taking place while I was in Orange. Thankfully, it only obstructed a portion of the courthouse.

A cannon graces the courthouse grounds and I can only assume it has some Civil War significance. After all, the Battle of Sabine Pass happened only miles from where this building now stands. 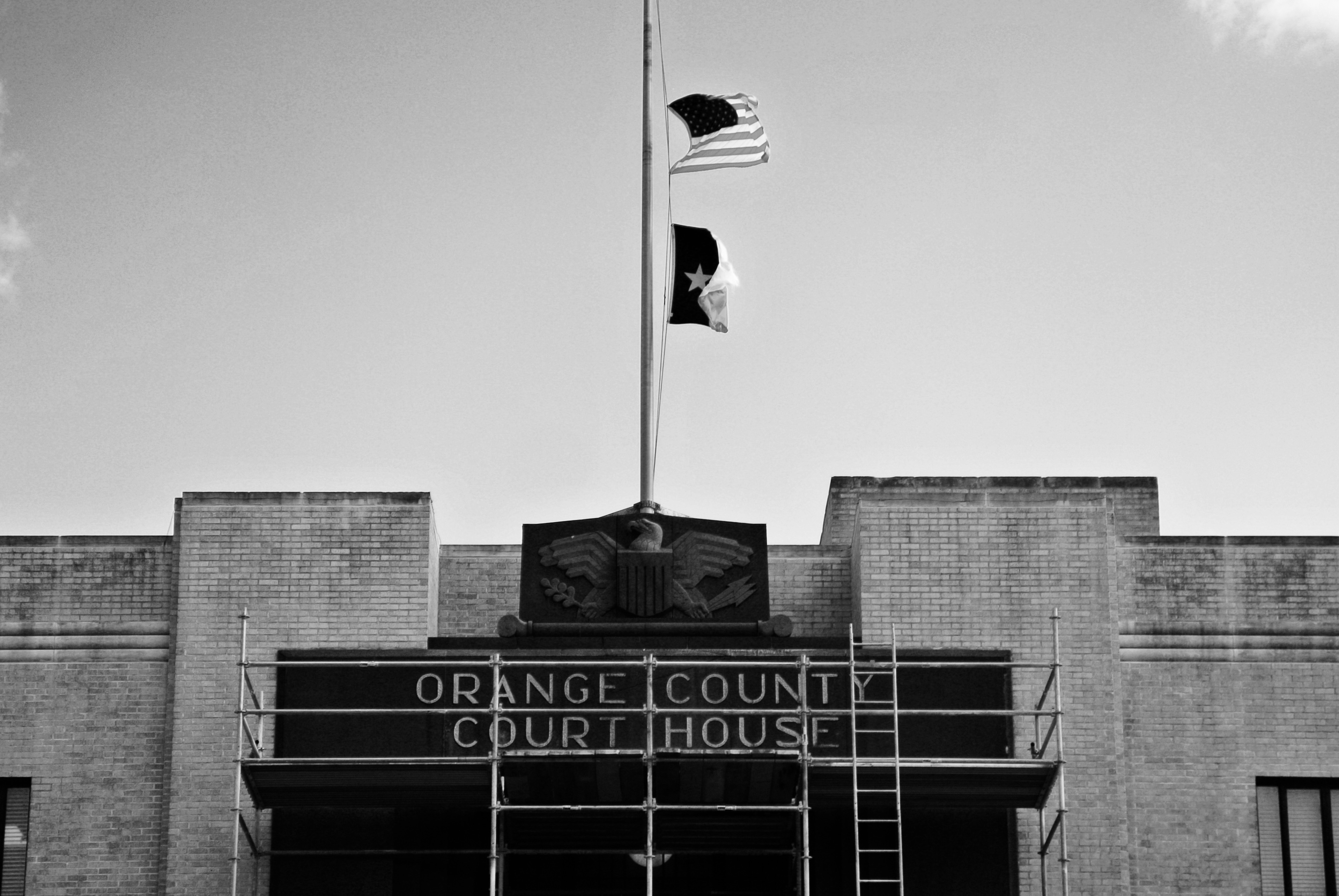 The northeast corner of the courthouse property

The southeast corner (and a sea of cars)

This scene is only two blocks from the courthouse. That’s Louisiana you see across the way.

And that’s Texas, on the far side (the Sabine River winds in and out here). 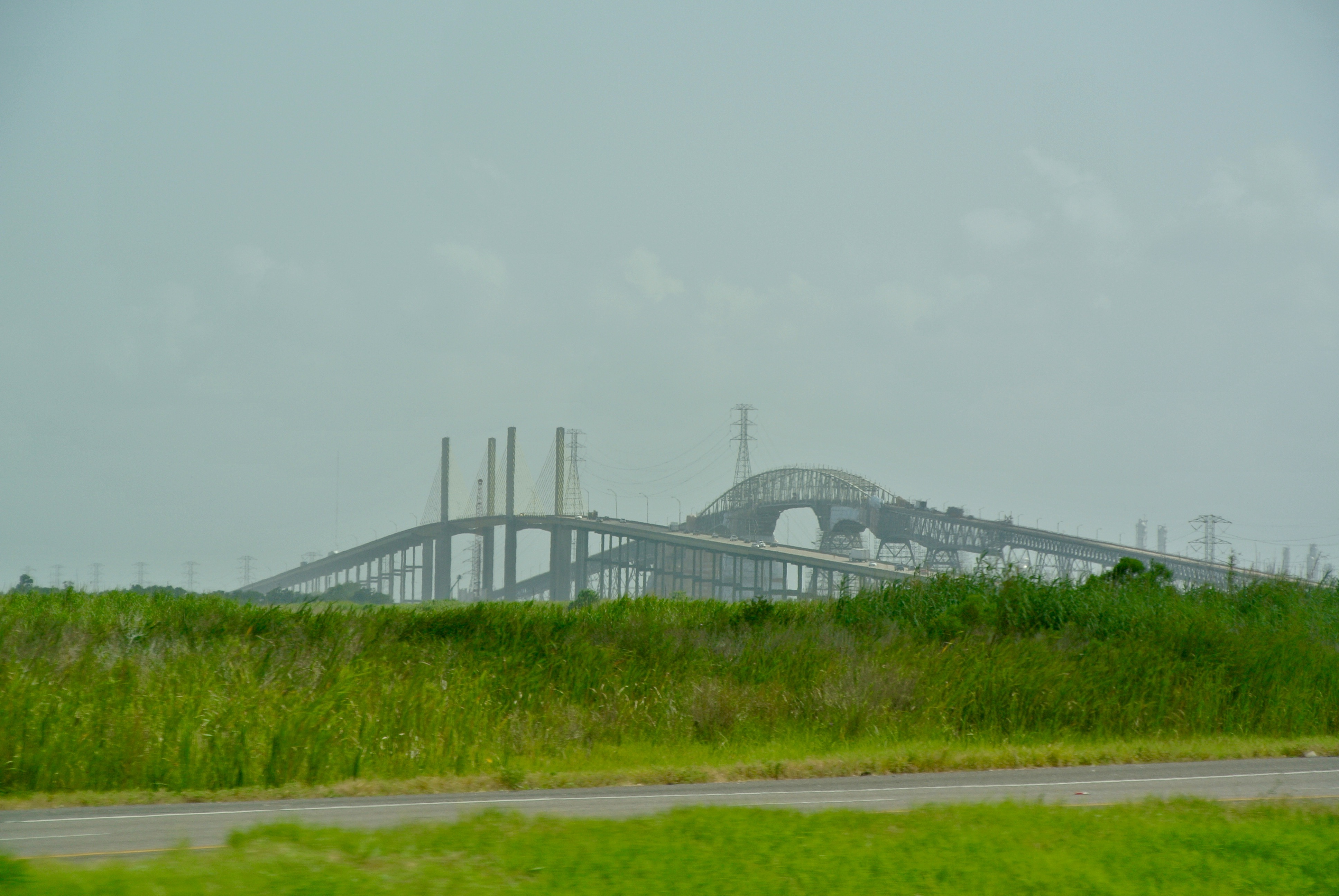 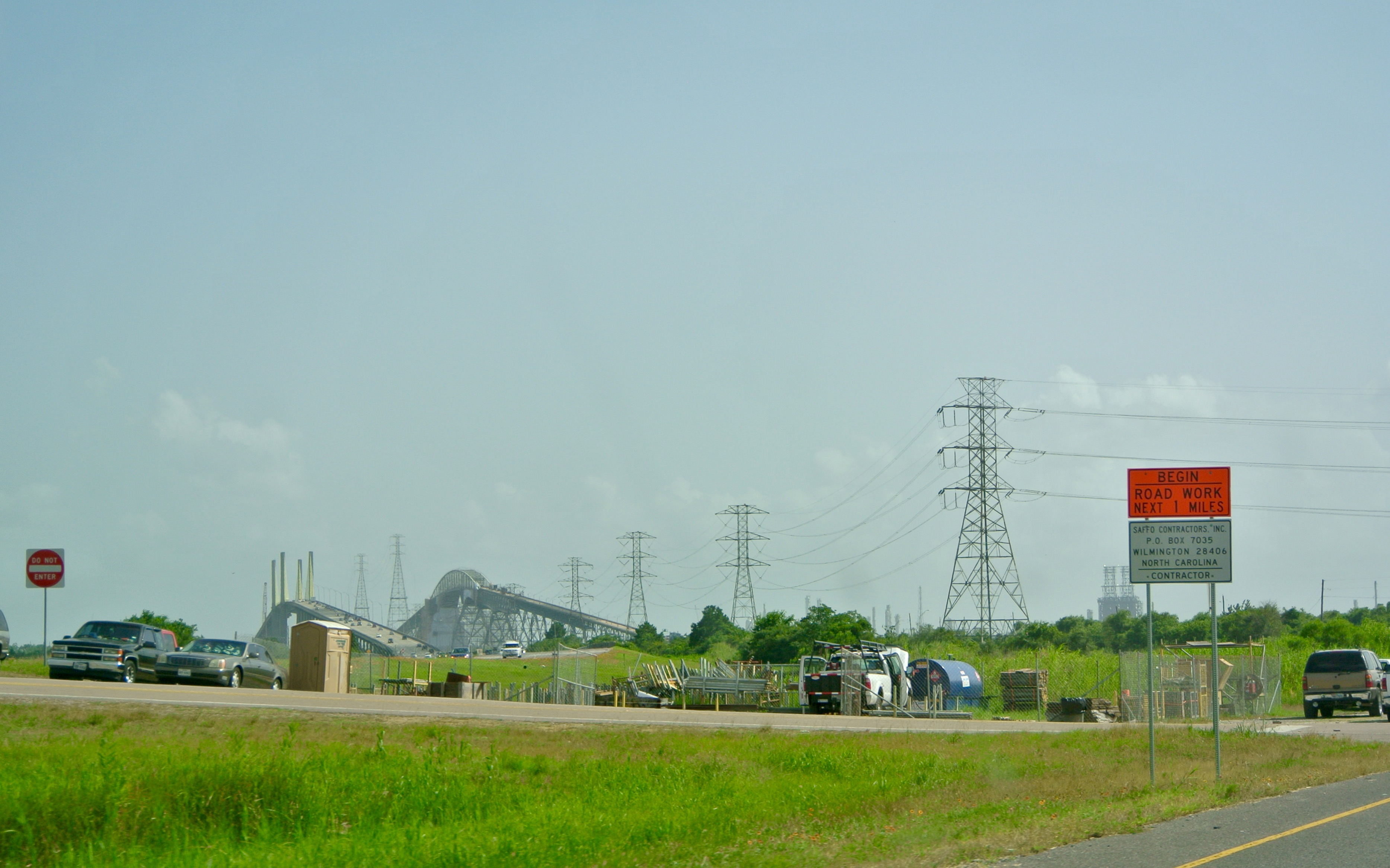 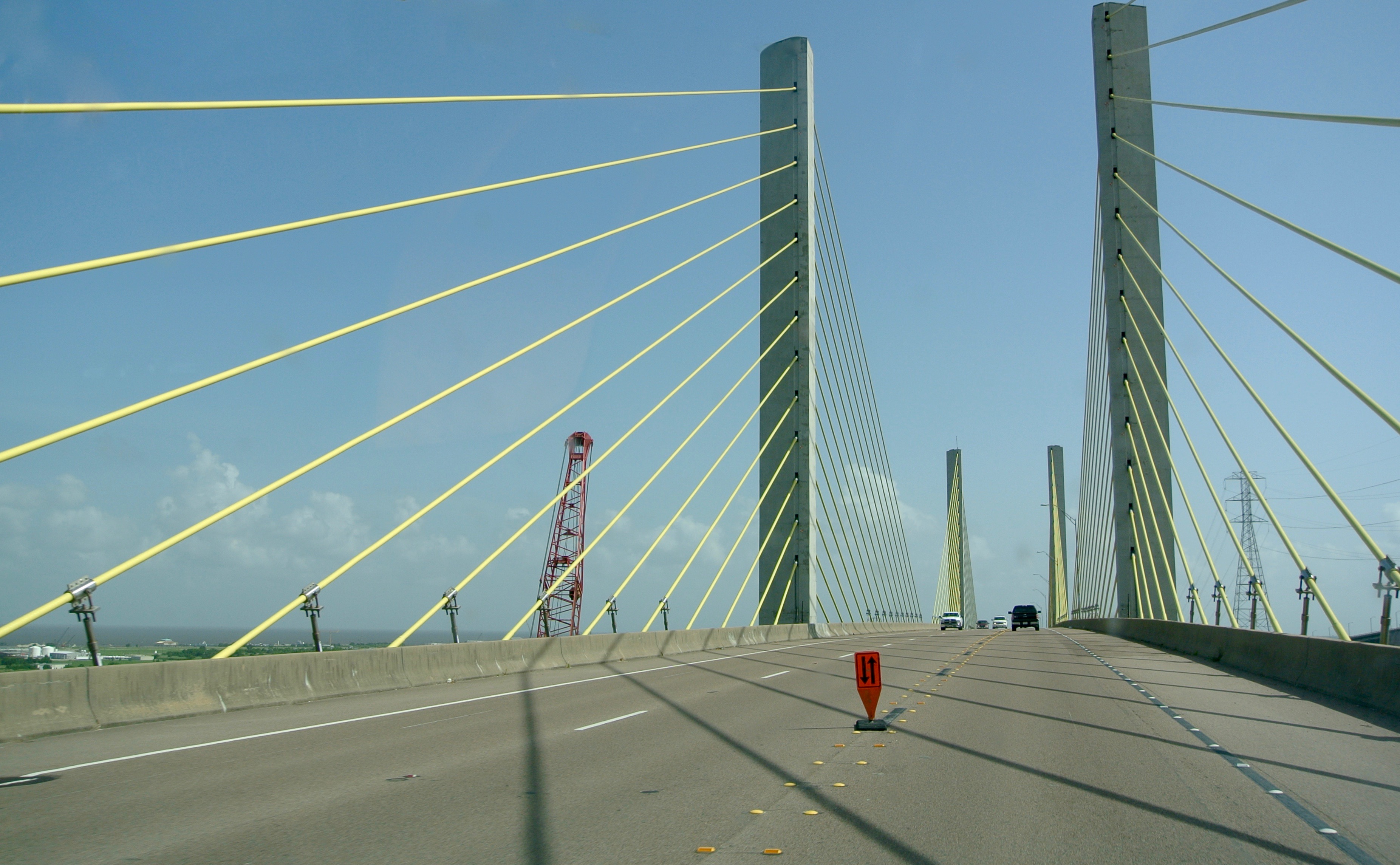 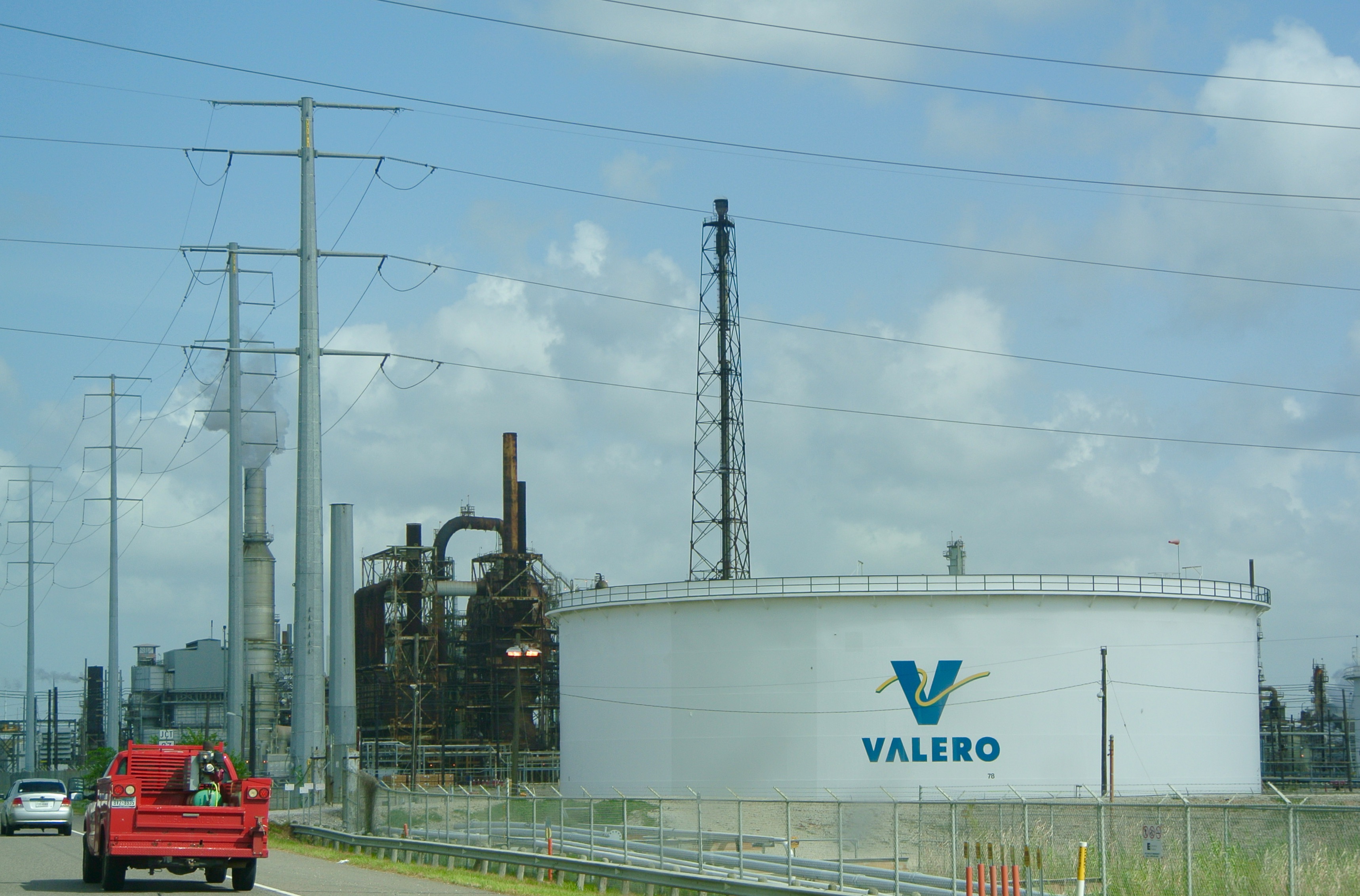