“The area was named for Thomas W. Ward. Ward County covers 539,460 acres, or 836 square miles, of generally level land; elevations range from 2,400 to 2,800 feet above sea level. Large areas in north Ward County are composed of active, windblown sand dunes, subject to wind erosion and sediment transport. This area has scattered oak groves and a number of sections commonly barren except for grasses and nongrassy herbs, the abundance of which depends on rainfall.”

“Archeological investigations conducted in northwestern Ward County have found evidence of prehistoric man in the form of occupational debris, petroglyphs, and pictographs. Historic Indian groups that may have successively occupied or annually traveled through what is now Ward County include the Jumanos, the Apaches, and the Comanches. Information concerning these Indians can be found in journals written by early Spanish explorers, including Álvar Núñez Cabeza de Vaca and Antonio de Espejo. Although Cabeza de Vaca did not describe any particular Indians in or around the area that is now Ward County, he did mention “the cow nation” that may have ranged over the area.”

“These bison hunters were probably the same group that Espejo, leader of a Spanish expedition through West Texas in 1583, called the Jumanos. The sand dunes east of the site of present Monahans are claimed to have been an annual watering spot for Comanches. Water is available at shallow depths in the sand hills, a critical factor in attracting human populations to the area. Large numbers of artifacts, including projectile points, beads, and scrapers, and various other stone tools have been found in the sand hills.”

“In 1881 the Texas and Pacific Railway crossed the region and established stations at Sand Hills, Monahans, Aroya, Pyote, Quito, Quito Quarry, and Barstow. The Texas state legislature carved Ward County from a portion of Tom Green County in 1887, but by 1890 only seventy-five people lived there. The county was organized in 1892, and Barstow became the county seat; a red sandstone courthouse was built in 1893.” 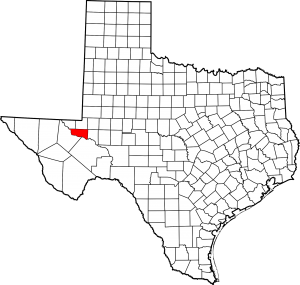 “By 1900 the United States Agricultural Census found 167 farms and ranches, encompassing 424,000 acres, in the area, but only 5,500 acres were described as “improved.” The economy revolved primarily around ranching at that time. Almost 13,000 cattle and about 4,400 sheep were reported in the county that year, while only eighty-three acres were planted in corn and 1,500 acres in cotton. The census reported 1,451 people that year. By 1904 Barstow had become a farming and ranching trade center located near numerous vineyards and orchards made possible by irrigation projects on the Pecos River.”

“In 1904, however, an earthen dam on the Pecos burst, and the resulting flood waters salted and ruined many of the farms near Barstow. A serious drought plagued farmers in 1907; nevertheless, by 1910 there were 231 farms and ranches, and 2,389 people lived there. Almost 14,000 cattle were reported that year, and 3,000 acres were planted in cotton. There was another drought in 1910, and the vineyards and orchards began to decline by 1911; farming along the Pecos had ceased by 1918.”

“In the 1920s Ward County entered a period of economic prosperity following the opening of the Hendrick oilfieldin 1926. Pipelines and railroad loading tanks were constructed at Wickett, Pyote, and Monahans. Oil was discovered at Grandfalls in 1929, and the nearby community of Royalty was established. That same year the Texas and New Mexico Railroad built tracks from the New Mexico state line to Monahans to handle the increasing transportation demands of the oil industry.”

“The 1930s were boom years in Ward County. U.S. Highway 80 was paved from Big Spring to Pecos by 1933. Oil, gas, potash, and sodium sulfate industries developed, and Monahans became the economic and population center of the county. A refinery was built at Wickett, and Monahans had carbon black and chemical plants by 1937; almost 9,720,000 barrels of crude oil were produced in the county in 1938.”

“On May 10, 1938, Monahans won a contested election to move the county seat from Barstow to Monahans. The election was upheld in 1939, and the county seat moved to Monahans that year. The population of Ward County more than doubled during the 1930s, rising to 9,575 by 1940. Pyote experienced a period of economic prosperity during World War II, after the Pyote Army Air Field was constructed in 1942.”

“In 2014 there were 11,625 people living in the county. About 43.4 percent were Anglo, 4.9 percent African American, and 50.4 percent Hispanic. Most residents lived in Monahans (population, 7,569). Other communities that year included Barstow (370), Grandfalls (393), Pyote (122), Royalty, Thorntonville (514), and Wickett (525). Monahans hosts a number of annual events, including the Freedom Fair, the Greenthumb Show, the Miss Monahans Pageant, and the AQHA Quarterhorse Show, all held in July; a Pecan Perfection show is held there in November, and a Christmas Parade is staged each December.” 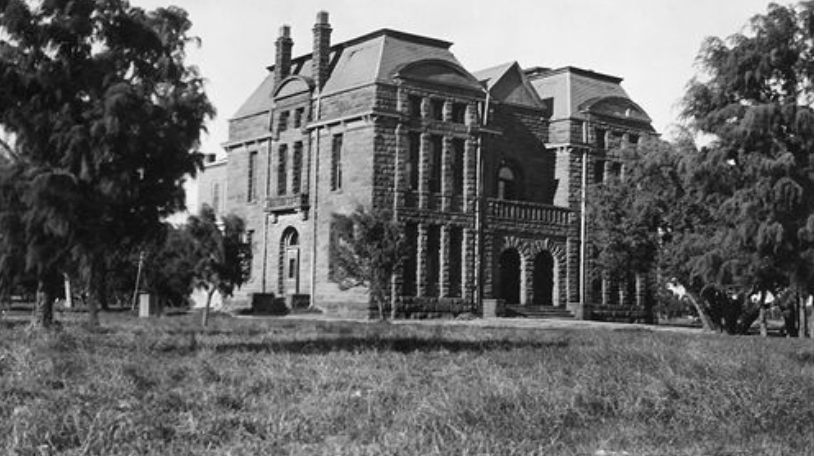 The architect for this building is not clear, but we know that the 1893 courthouse was designed with a combination of the Richardsonian Romanesque and Second Empire styles. Because it was made of locally quarried, red sandstone from the Pecos River, these styles adopted a sort of rustic feeling that normally would have been uncharacteristic.

The Memory & McErvan firm was responsible for its construction. Their original work included a central tower, but it was removed sometime between 1893 and 1939.

A 1938 election moved the county seat from Barstow to Monahans in an effort to chase oil money, and this courthouse subsequently fell out of use. It was demolished in the 1950s.

Townes & Funk sent plans for a Moderne courthouse to Monahans and their design was accepted. Concrete and stone were employed by contractor C.S. Lambie & Co. to bring the first courthouse in Monahans to life.

It has served ever since. 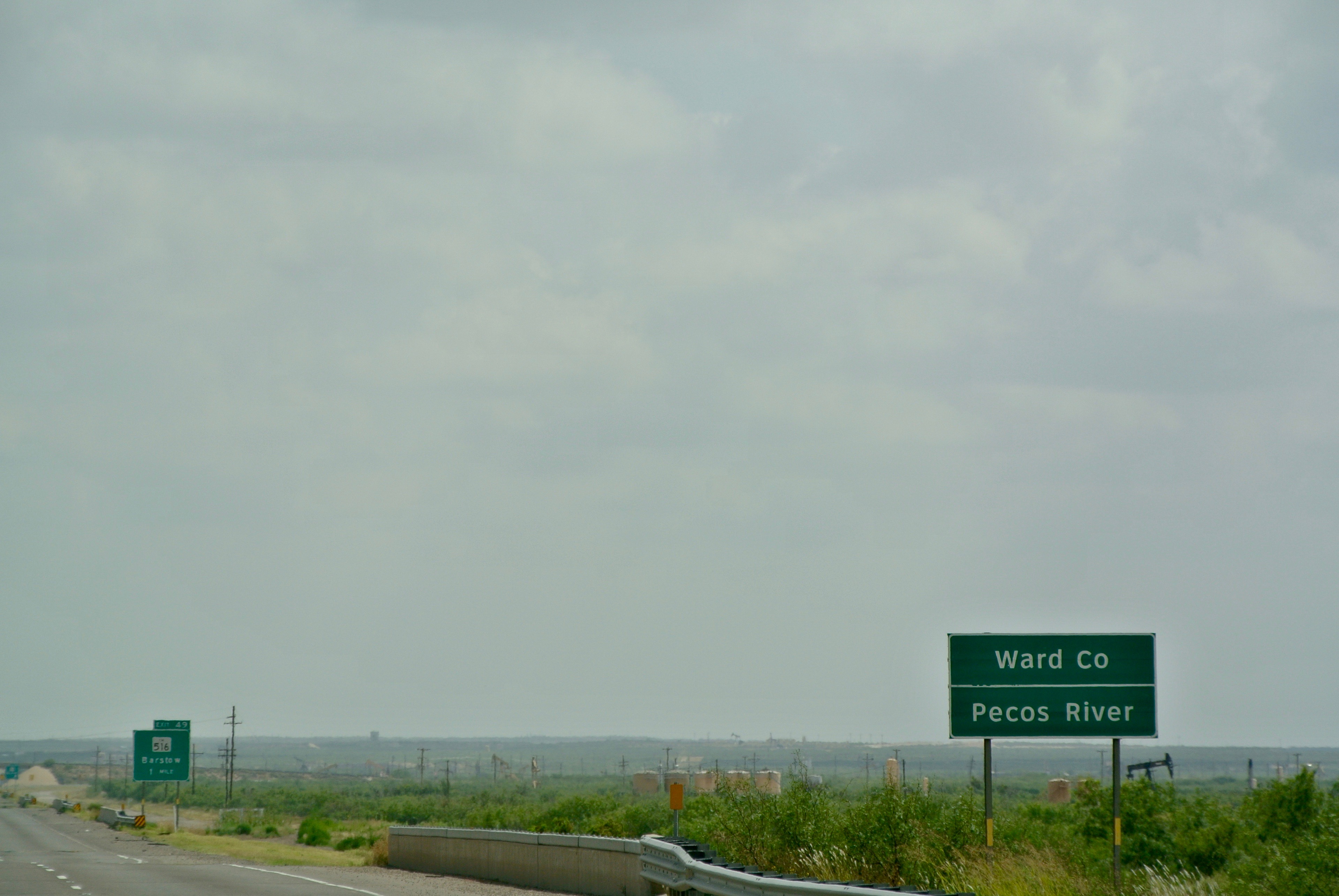 The Ward County Courthouse looks west on Allen Avenue. This is the northwest corner. 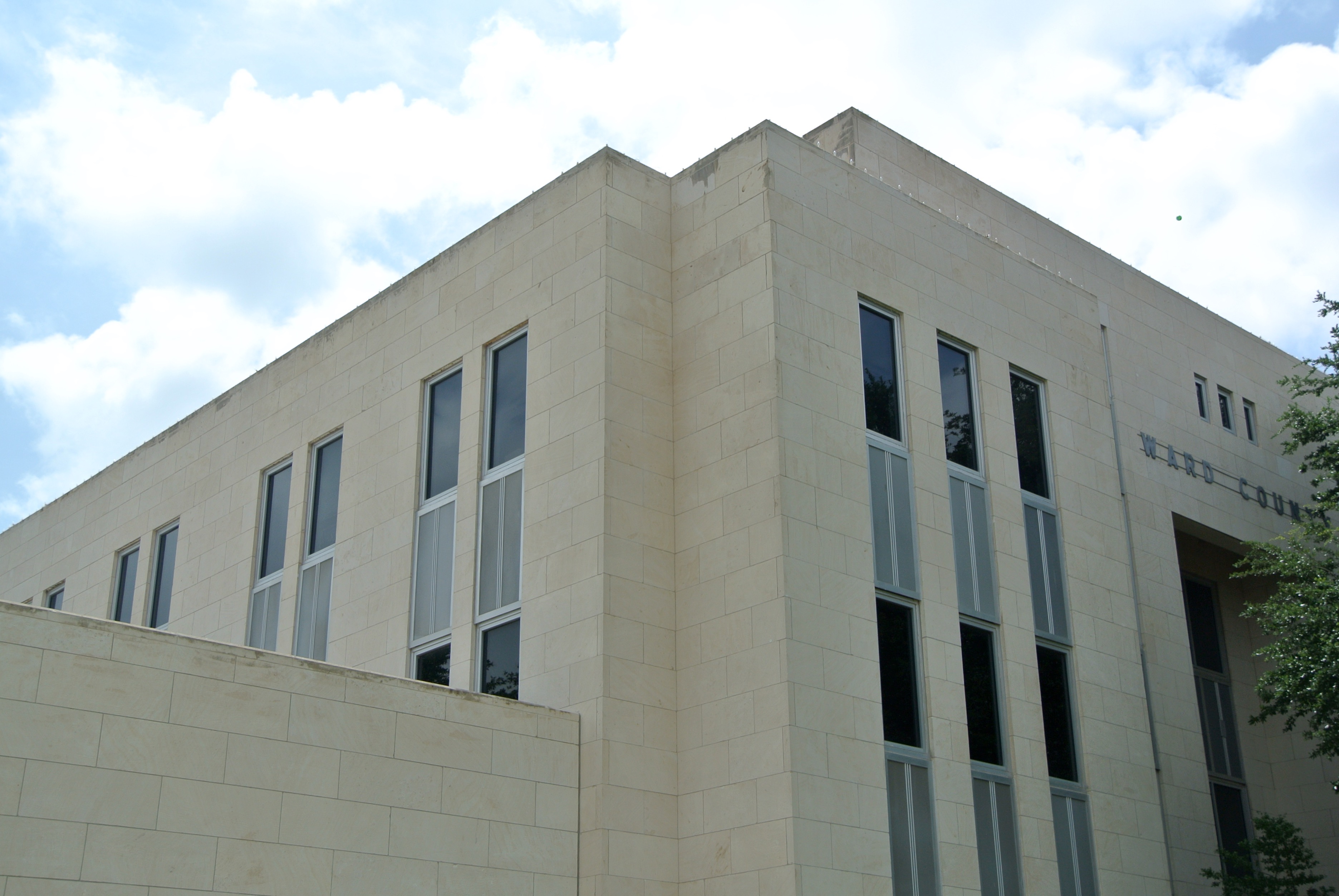 This is the main entrance.

And this is its view. 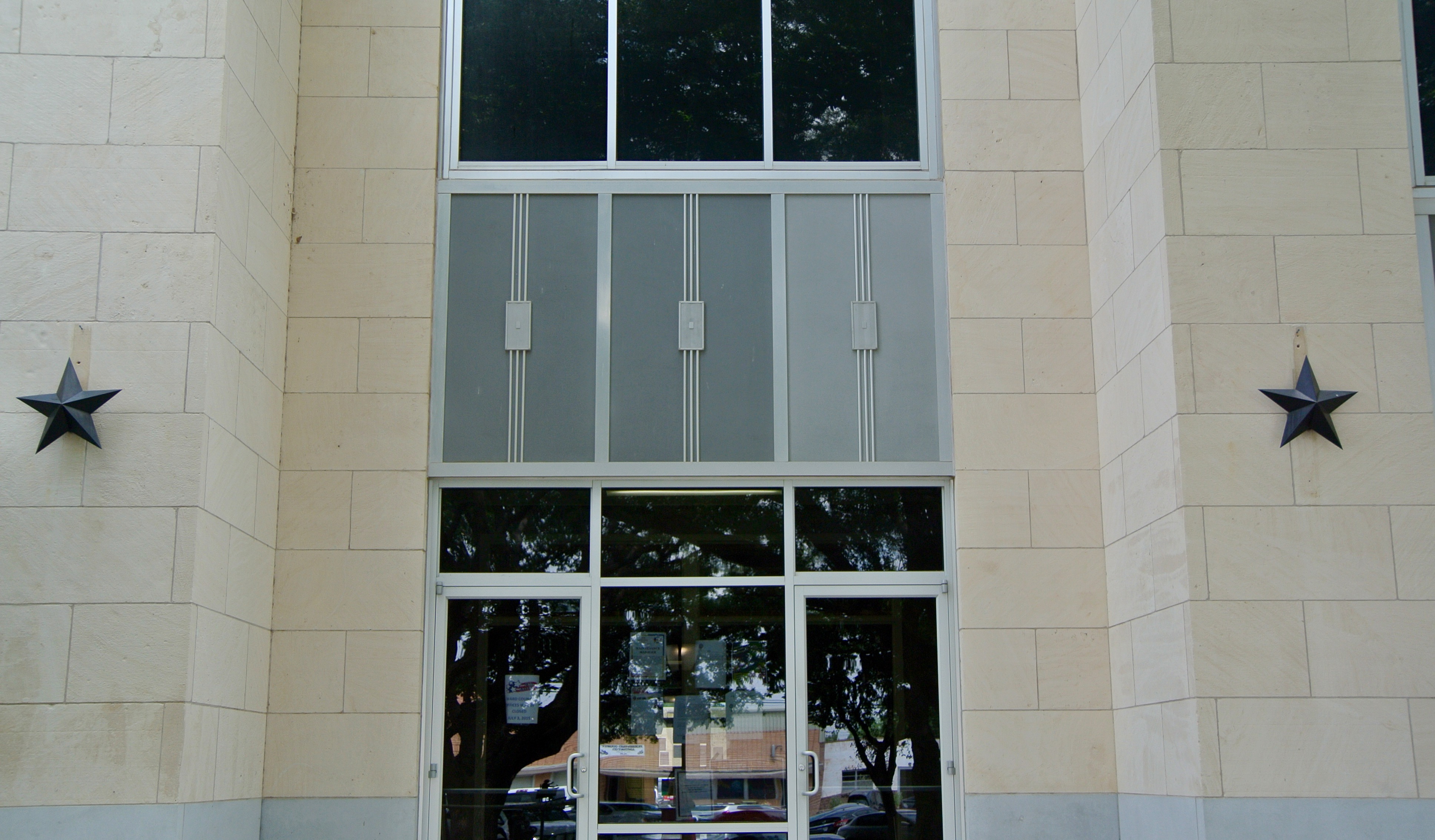 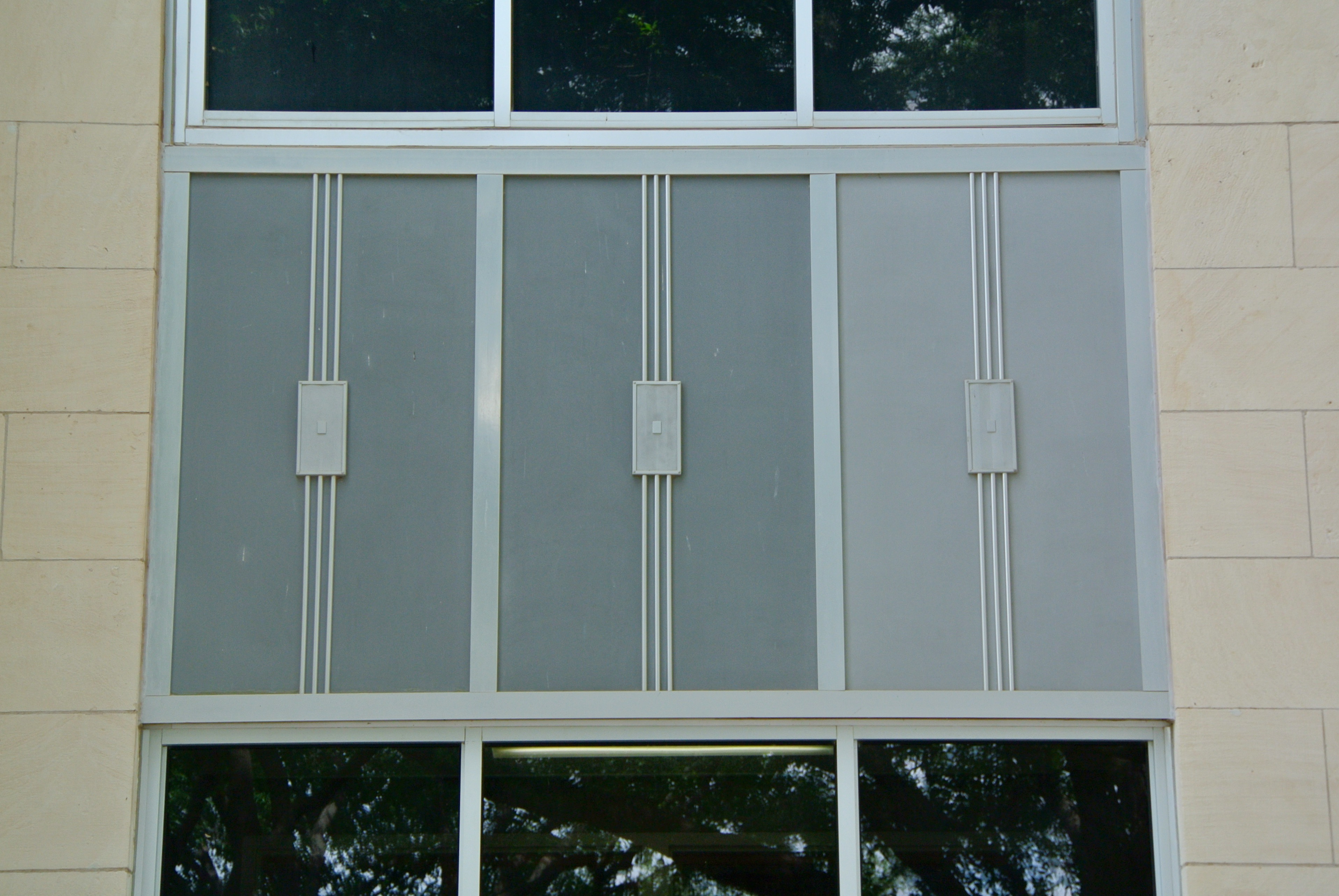 The southern façade, on 5th Street

This is the building’s southeast corner. The portion on the right was an addition built much more recently.

The eastern courthouse entrance is accessible through this impressive annex. 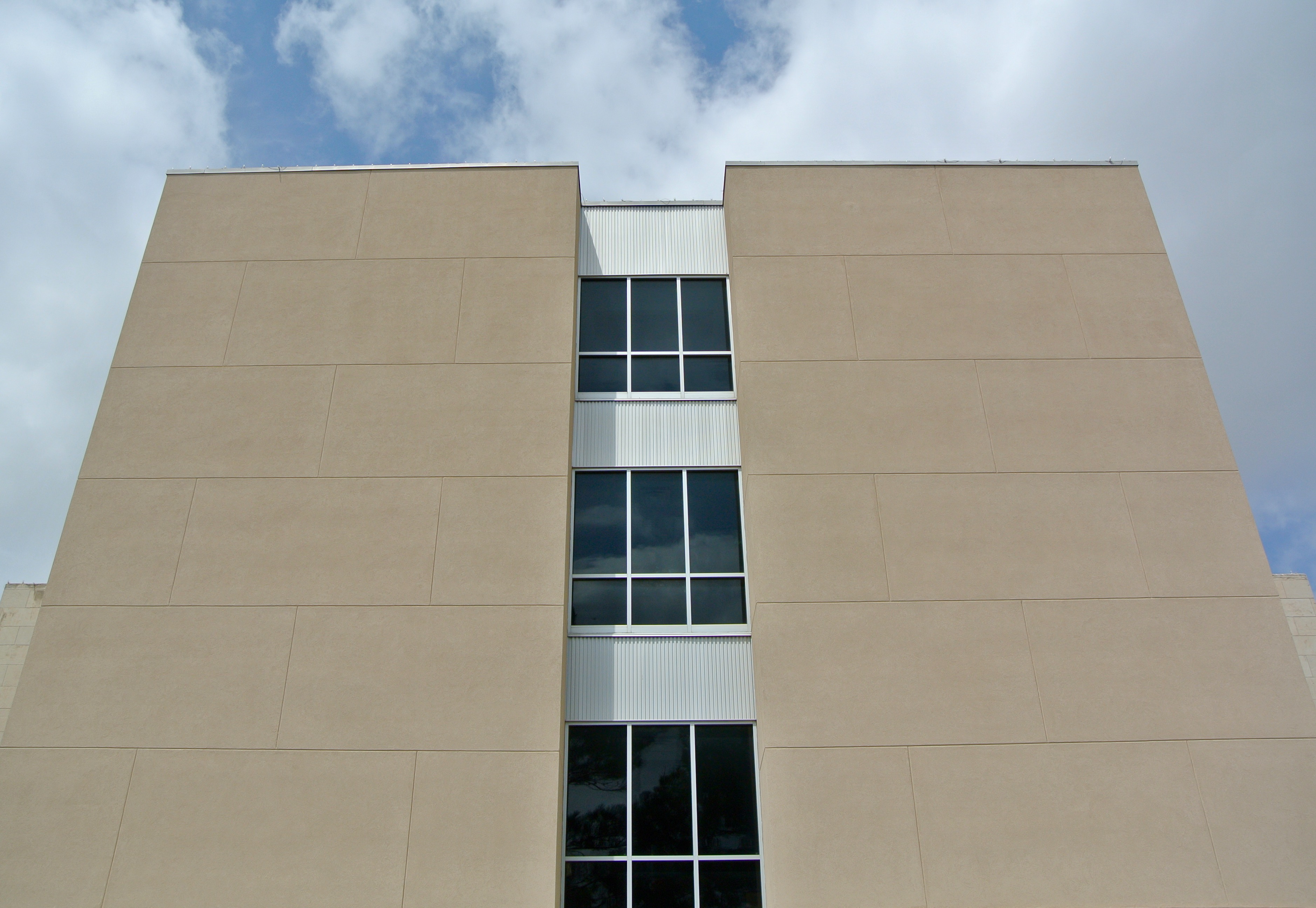 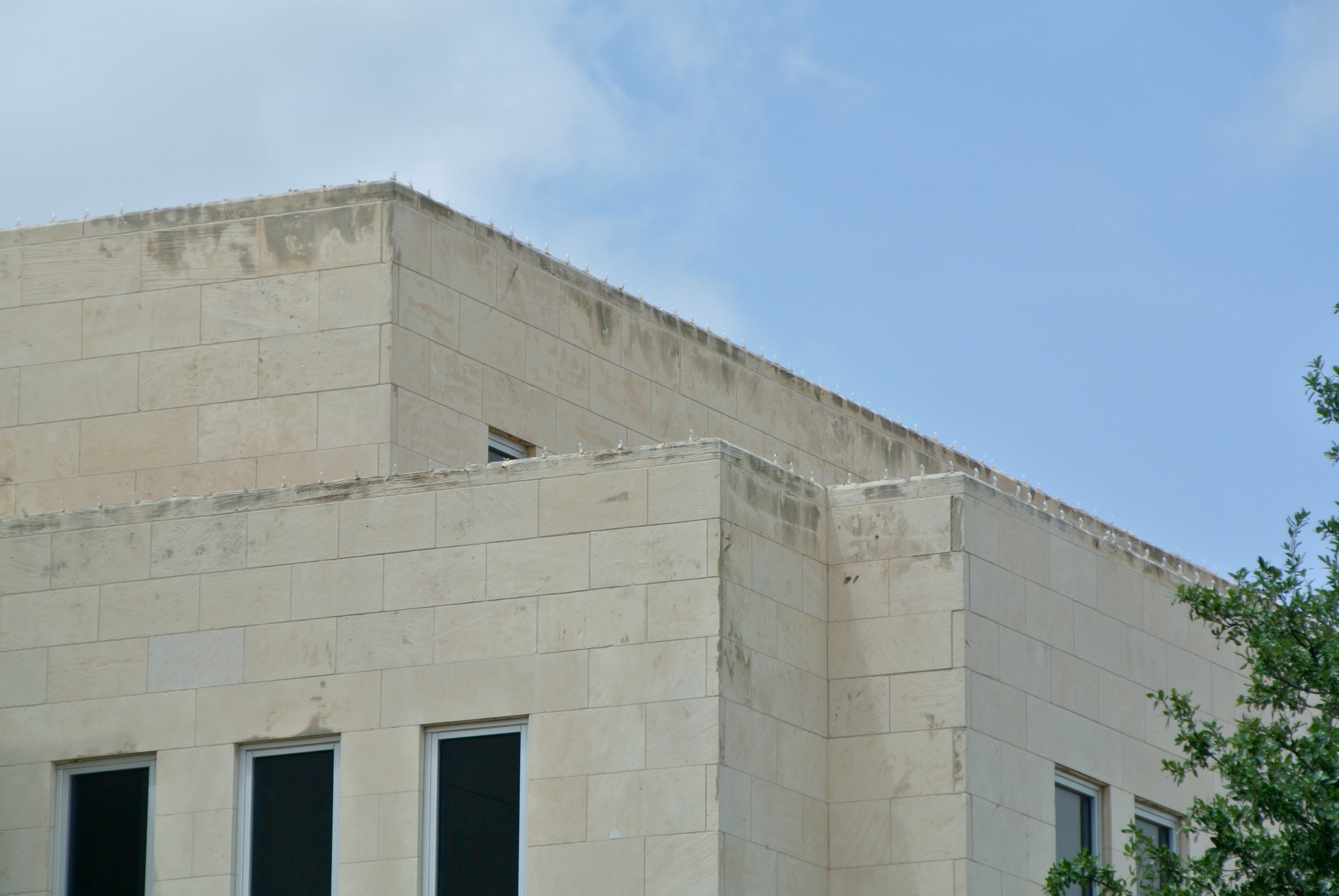 The years have begun to shown their work on this poor courthouse.

Across Bruce Street is the Ward County Sheriff’s Office. 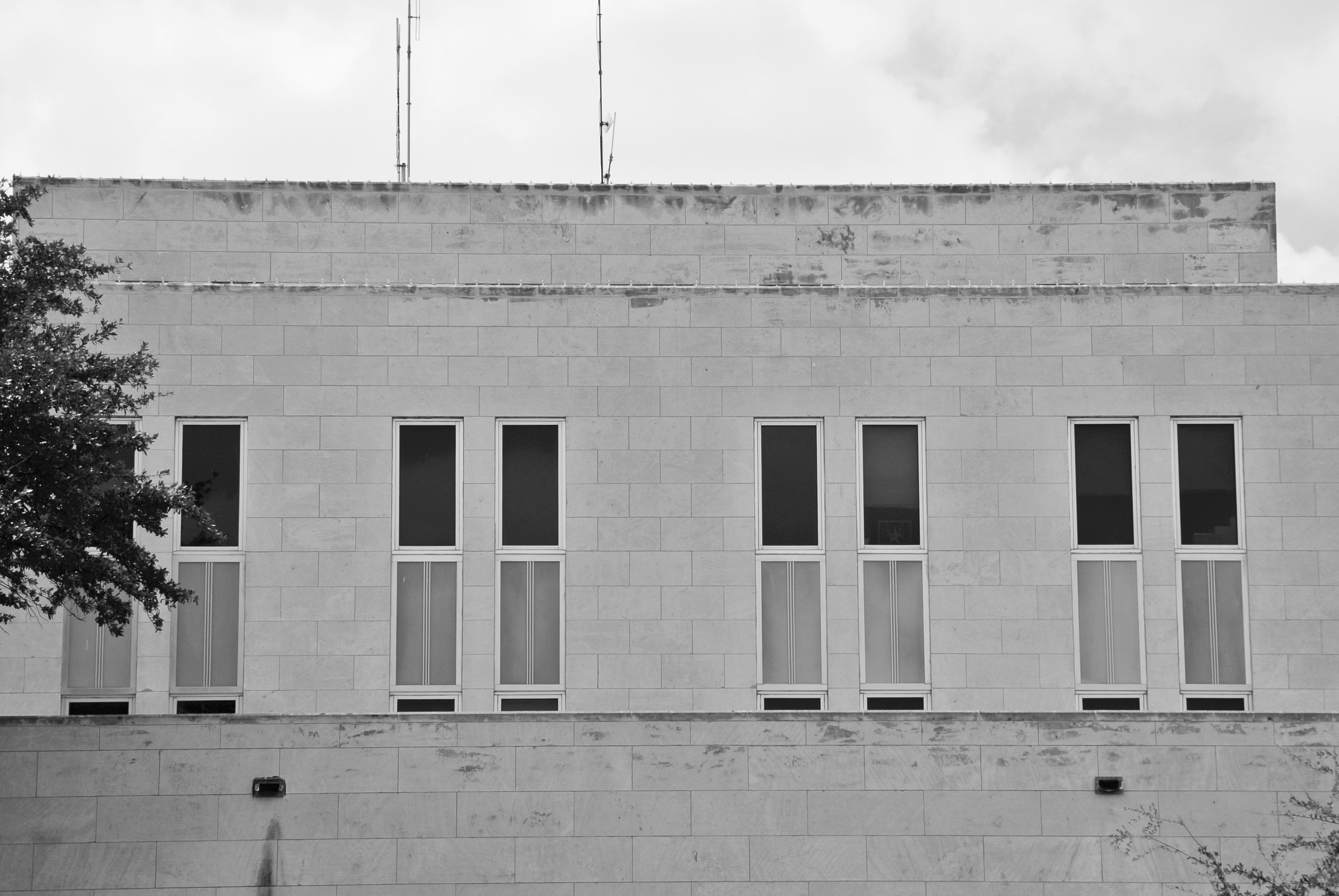 I visited Ward County on the 4th of July. Naturally, there was a major celebration in progress on the Monahans square.

The party was centered at Hill Park, just south of the courthouse.

Just outside of Pyote, Texas 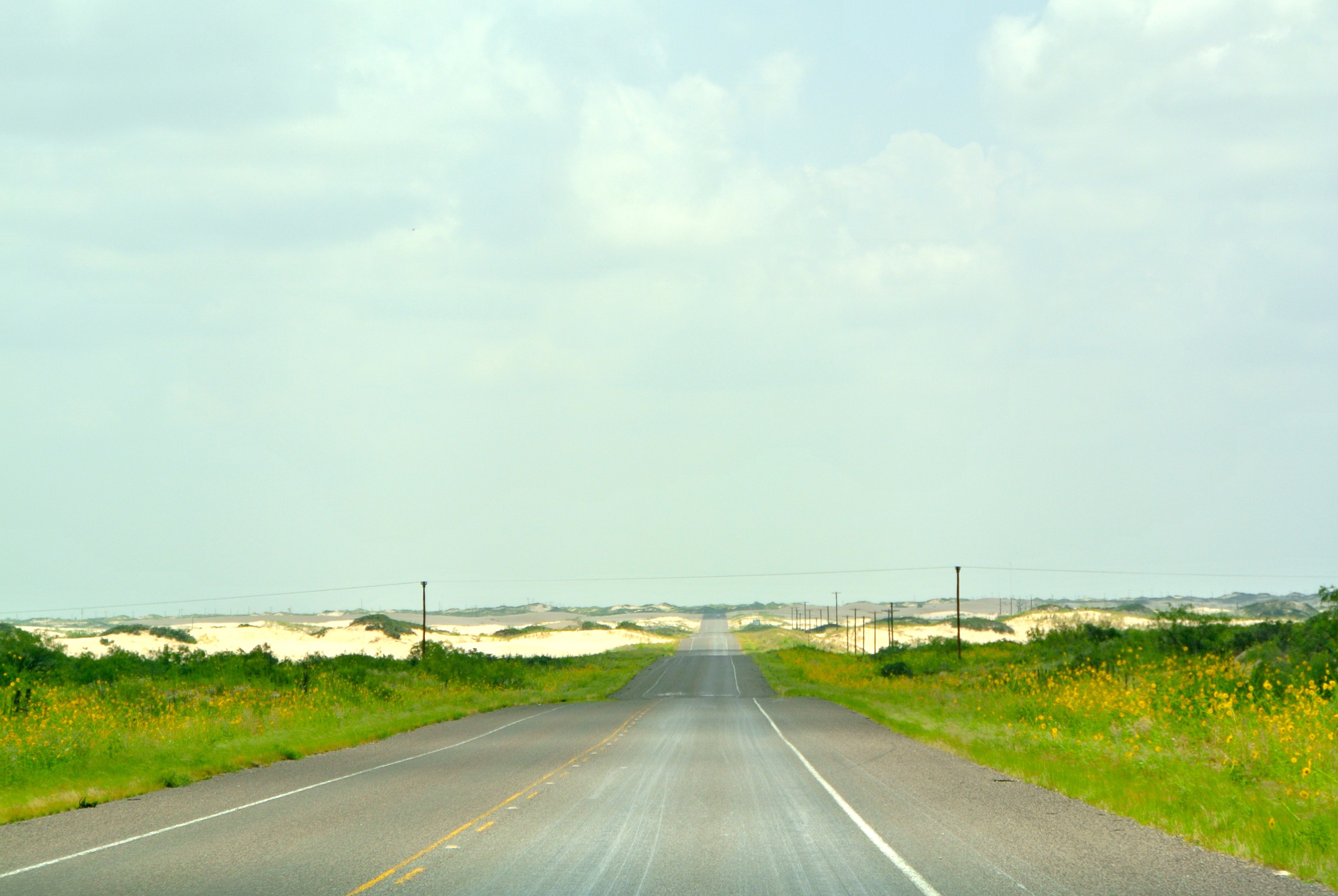 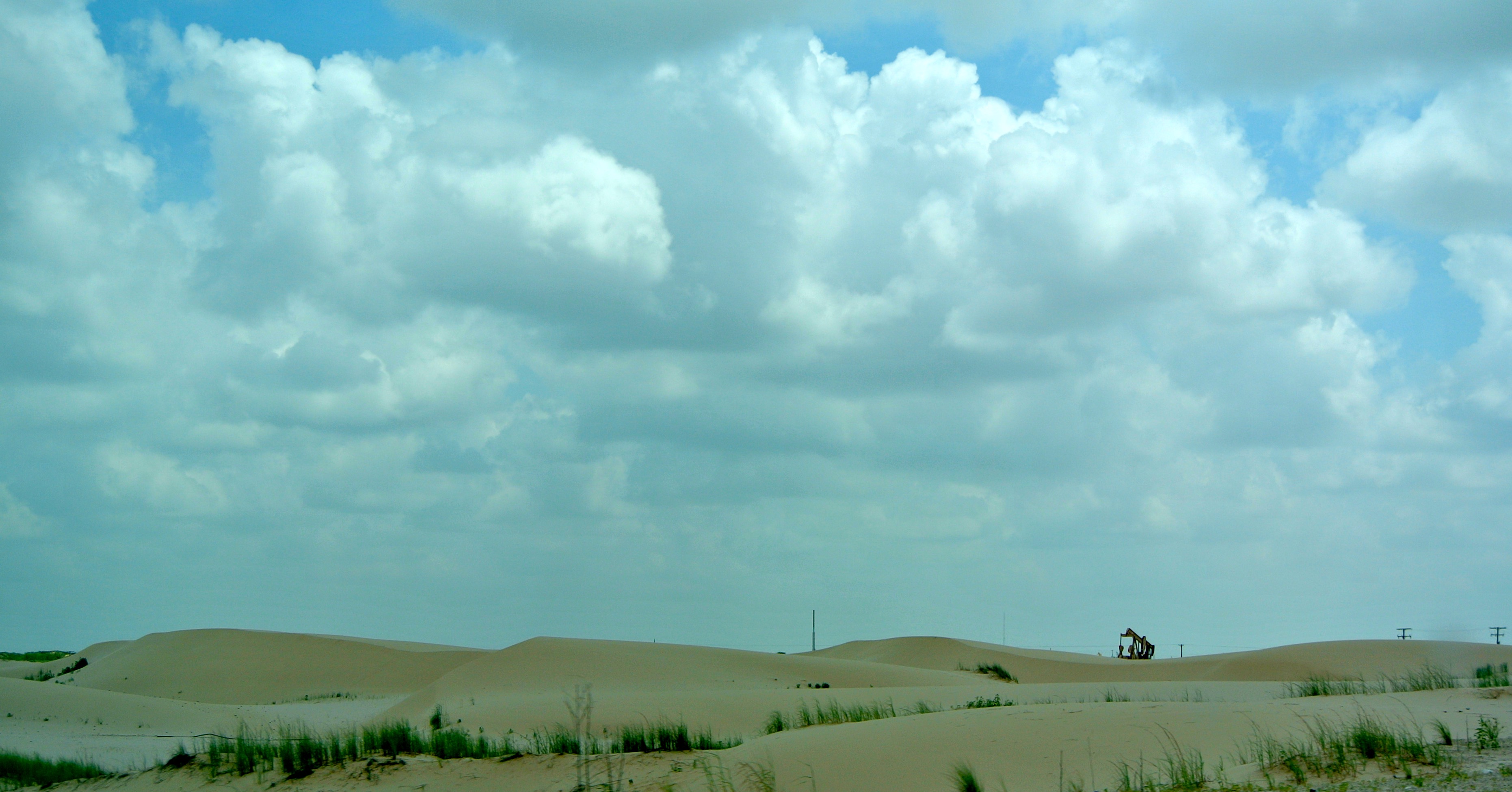 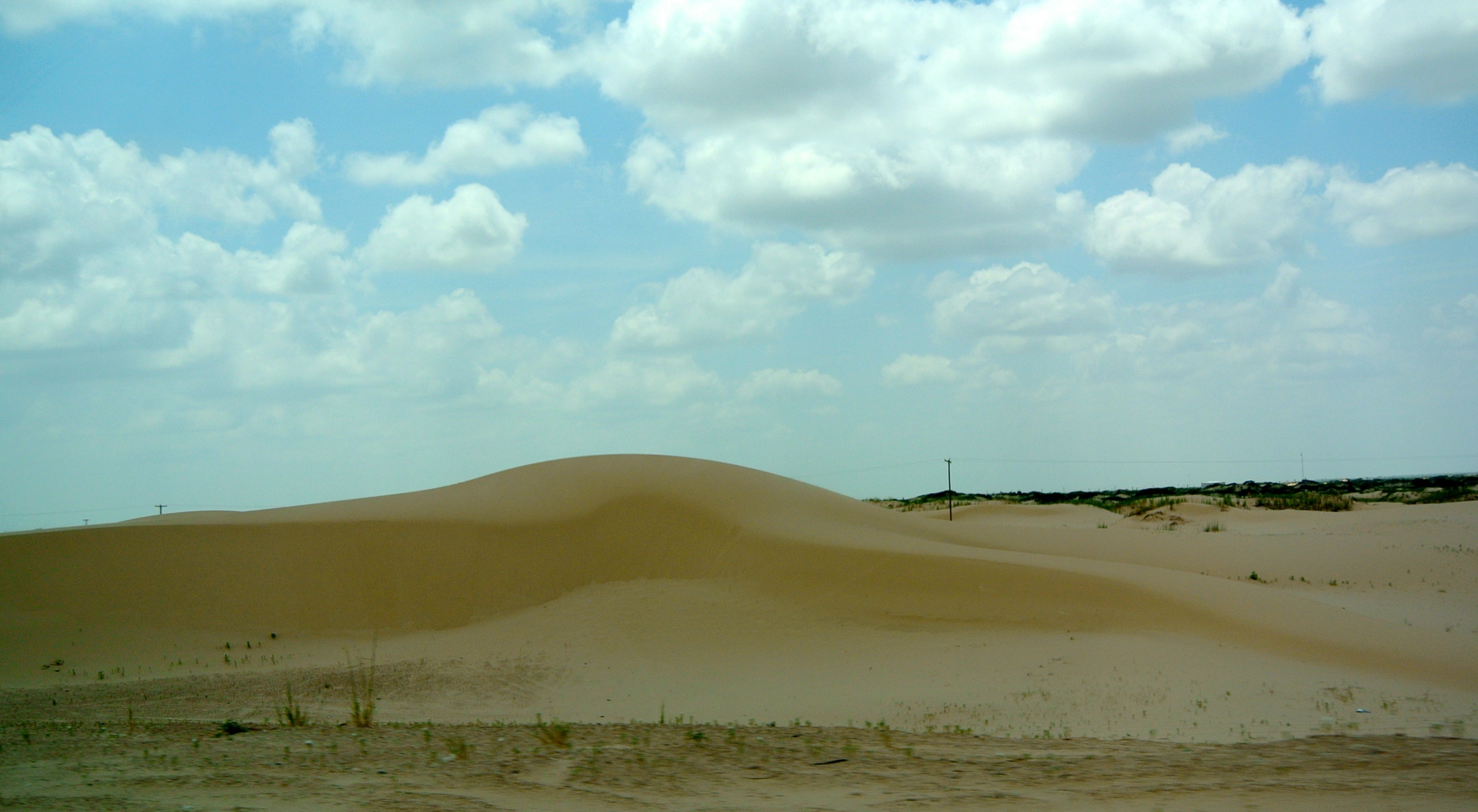