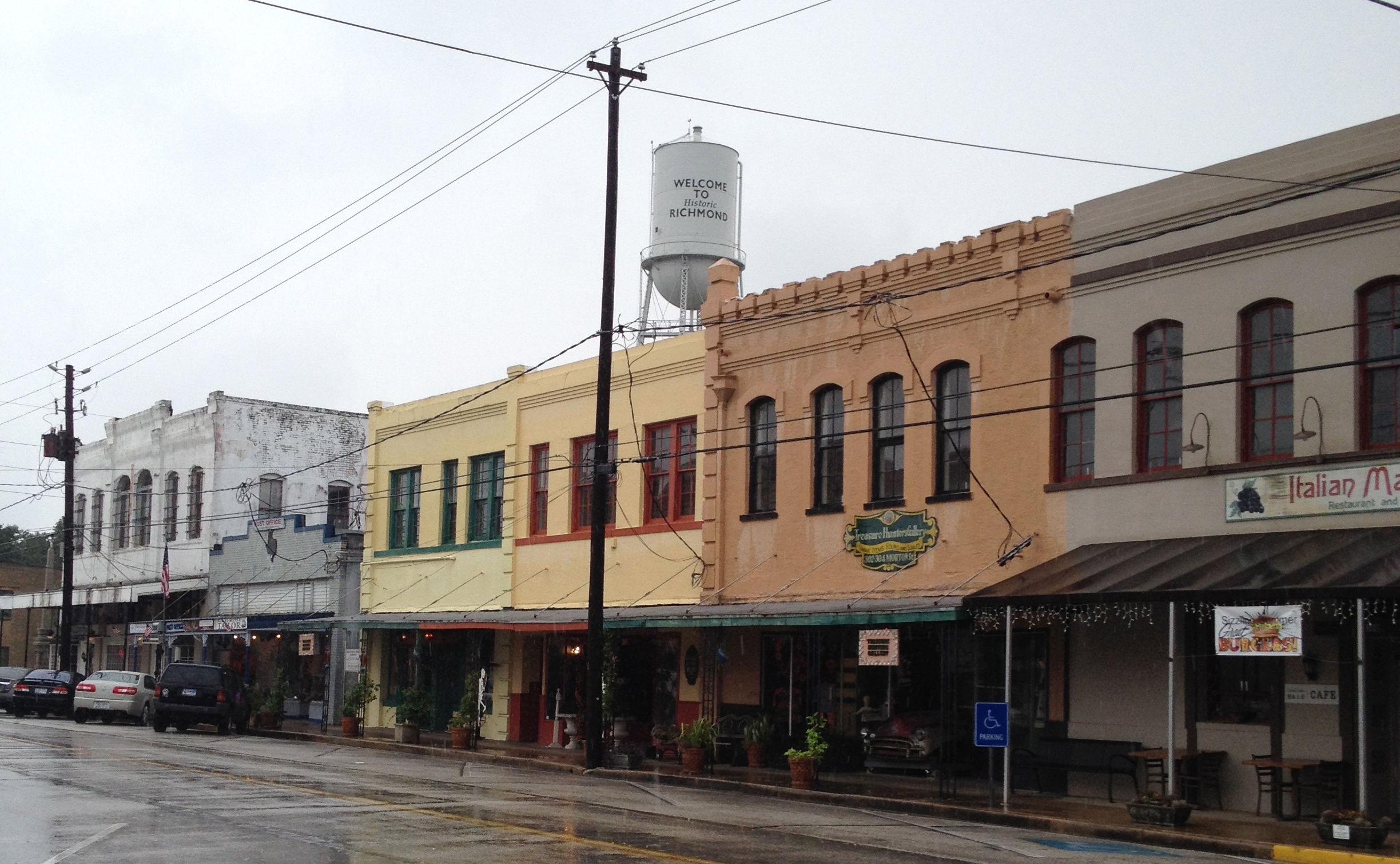 “The county comprises 869 square miles of level to slightly rolling terrain with an elevation ranging from eighty to 250 feet above sea level.”

“The settlement of Fort Bend County began in the early 1820s as part of the ajax downs casino expansion of Texas under the auspices of the Spanish government. Authorization to settle 300 families in the valleys of the Brazos and Colorado rivers was initially granted to Moses Austin, but plans were delayed by his death in June 1821 and Mexican independence from Spain.Stephen F. Austin assumed the responsibility of leadership from his father and gained confirmation of the original Spanish grants from the newly established Mexican government in 1823.”

“Following arrangements with Austin, a group of colonists sailed from New Orleans in November 1821 on the schooner Lively and anchored near the mouth of the Brazos River on the Texas coast. In 1822 a small party of men from this group left the ship and traveled inland some ninety miles and, on a bluff near a deep bend in the river, built a two-room cabin. As the settlement grew, the cabin became known as both Fort Settlement and Fort Bend; the latter name, in time, prevailed.”

“In 1824 the Mexican government issued documents officially granting to the colonists their leagues of land. Of the 297 grants, fifty-three were issued to Fort Bend settlers. The presence of the Karankawa Indians near the new colonial settlements proved to be a comparatively minor problem. The first settlers had a few skirmishes, but as the colonies increased, the Karankawas began moving out of the area and by the 1850s had migrated as far south as Mexico.”

“In May 1837 the Congress of the Republic of Texas passed an act incorporating nineteen towns, including Richmond. … On January 13, 1838, the citizens voted to make Richmond the county seat. The county was taken from portions of Austin, Brazoria, and Harris counties. Its irregular shape was, in part, the result of using waterways to form the west and segments of the south and east boundaries. Several efforts have been made to change the lines but with little success.”

“Some of the first settlers in Fort Bend County played prominent roles in early Texas history. Nathaniel F. Williams and Matthew R. Williams cultivated and milled sugar on their Oakland Plantation near Oyster Creek in the early 1840s, thus laying the groundwork for an industry that continued to develop and thrive in Sugar Land; in 1837 Jane Long opened a boarding house in Richmond, where she lived until her death in 1880; and Mirabeau B. Lamar moved to Richmond in 1851 and built a plantation home on land purchased from Jane Long. Both Mrs. Long and Lamar are buried in Morton Cemetery, Richmond.” 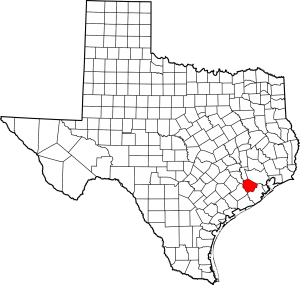 “During the Texas Revolution many of the people of Fort Bend fled in great haste as Antonio López de Santa Anna‘s army marched through the area. Part of this army camped at Thompson’s Ferry on the Brazos River while part marched on to meet defeat at the battle of San Jacinto. Fort Bend settlers returned from the Runaway Scrape to find their homes plundered or burned and their livestock scattered or dead.”

“Soon after its founding, Richmond developed into a prosperous trade center for the surrounding agricultural region of the lower Brazos valley. Barges and steamboats plied the Brazos River, transporting cotton and other products to the port at Galveston, as merchants of Richmond and other river towns vied with Houston for the lucrative agricultural trade. Transportation facilities were greatly improved in 1853, when the Buffalo Bayou, Brazos and Colorado Railway was completed to Stafford’s Point from Harrisburg, which was located on Buffalo Bayou’s navigable channel to Galveston. The prosperity of the 1840s and 1850s, however, ended with the Civil War.”

“In antebellum Texas slaves were essential to the development of the valley plantations. As early as 1840 there were already 572 slaves in Fort Bend County, and by 1845 that number had risen to 1,172, placing Fort Bend near the top of counties with the largest slave populations. In 1850, Fort Bend was one of only six counties in the state with a black majority. The labor provided by the burgeoning slave population made possible the growth of the plantation economy. In 1860 there were 159 farms in Fort Bend county, with about 12,000 acres in cotton, 7,000 acres in corn, and 1,000 acres in sugarcane; the slave population totaled 4,127, more than twice that of the 2,016 whites. Fort Bend planters, believing that their economic and social successes, among other reasons, justified the institution of slavery, strongly supported the Confederacy, and, in 1861, voted 486 to 0 for secession from the United states.”

“Although battle never reached Fort Bend, the war’s duration and ultimate loss imposed economic hardships and social and political stress on the community. During Reconstruction, efforts to live in peace with politics dominated by Radical Republicans and black officeholders brought no more than an uneasy compromise. White Democrats, outnumbered by blacks more than two to one, were unable to regain control of local government until the late 1880s, when their all-out campaign to attract black as well as white votes led to the Jaybird-Woodpecker War.”

“This brief but violent conflict, which took place on August 16, 1889, abruptly ended the Republican, or “Woodpecker” rule, and the Democrats quickly formed the Jaybird Democratic Association. With a constitution that declared as its purpose the “protection of the white race” and “an honest and economical government,” the association controlled local politics mainly through the white primary, which excluded blacks.”

“New towns and a new demography began to develop in the last quarter of the nineteenth century as railroads branched out across the county. In 1878 the Gulf, Colorado and Santa Fe line from Galveston crossed the Galveston, Harrisburg and San Antonio (the former Buffalo Bayou, Brazos and Colorado) one mile west of Richmond. This junction, called Rosenberg, became a community when the developers of the New York, Texas, and Mexican Railway made it their headquarters in 1882.”

“Among the many towns founded in the 1890s by or for these immigrants were Beasley, Needville, and Orchard, which still exist as small rural communities serving farmers. Missouri City, on the far eastern edge of the county near Houston, was founded in 1894; Katy, a tri-county town in Fort Bend, Waller, and Harris counties, developed after the Missouri, Kansas and Texas (Katy) Railroad was completed to that point.”

“In the 1890s, a million-dollar refinery was built at Sugar Land and a new cane mill was constructed; in 1907, they were purchased by the Imperial Sugar Company, a major industry in the county and the only cane-sugar refinery in Texas.”

“Farming and ranching have been the central focus of Fort Bend County economic and social life since its inception. The influx of new settlers in the 1880s and 1890s helped county agriculture to change from antebellum plantations to productive small farms. The county had 2,365 farms with 183 acres each in 1900, in contrast to 995 farms with 154 acres each in 1890. The national recession of the 1890s, a major flood on the Brazos River in June 1899, and the great Galveston hurricane of 1900 forced many farmers into tenantry. By 1910, 61 percent of the county’s farmers were working as cash or share tenants.”

“During the World War II years, with the rural to urban movement and military service, farm tenantry dropped, and full ownership of farms increased. Since the 1960s, home developments, industry, business, and commerce in the county have forced a trend toward fewer commercial farms. The 1974 Census of Agriculture reported 1,340 farms in the county, but only 758 of these reported cash sales in excess of $2,500. Among the four top agricultural commodities for cash income in the mid-1980s were cotton, sorghum, beef cattle, and rice.”

“Until the last decade commerce and industry have been associated with the development and transport of oil, gas, and sulfur in the county. Local businesses provided agricultural needs and products and services for the communities. As the population increased in east Fort Bend County, a result of Houston’s westward expansion, industry and commerce became more diverse.”

“Among the top ten commercial taxpayers in Fort Bend County in 1983 were three property-development corporations and two high-technology corporations.”

The county’s first courthouse, built some four years after formal organization and six years after Texas secured independence, was housed in a residence purchases from the estate of a William Lusk. Reports indicate that it had eroded away by 1871. No photos survive.

J.H. Herndon built this three-story courthouse to succeed the original. It burned in 1887. 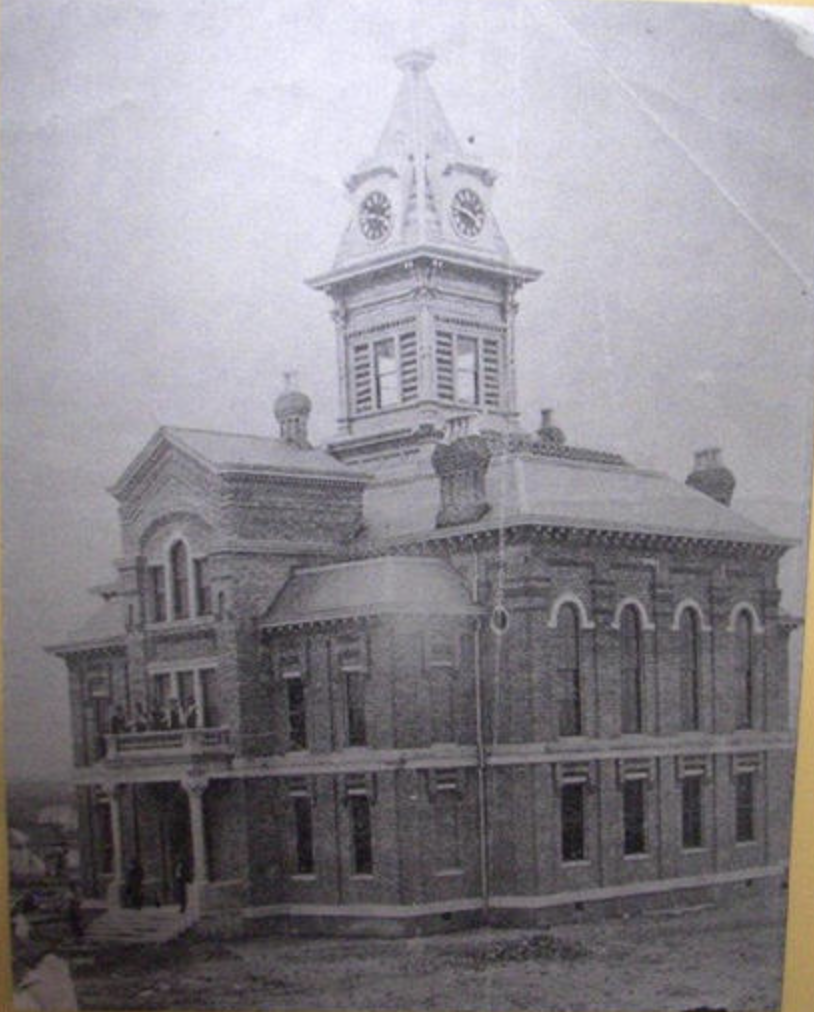 For the cost of $24,700, architect George Edwin Dickey designed a beautifully charming courthouse in both the Italianate and Renaissance Revival styles. Contractor Benjamin F. Trester aided in this process, and most likely used the period as an educational experience to adopt and adapt Dickey’s stylistic choices for his own. Trester would go on to design the Bandera County Courthouse, which looks a great deal like this one.

For concerns of space, a new courthouse was adopted in 1908 and this building stood for twenty two more years. It collapsed from fire circa 1930. 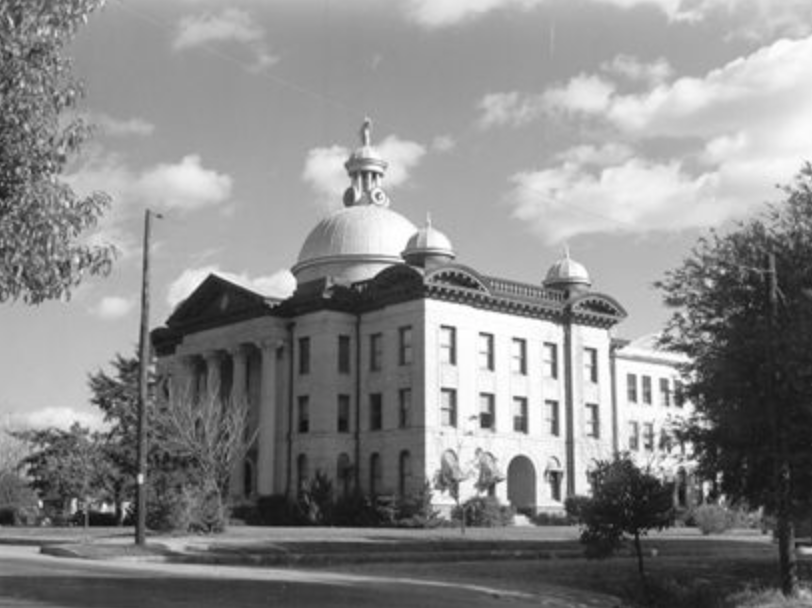 The succeeding courthouse was designed by the C.H. Page and Bro. firm in the Beaux Arts style. A sky-lit rotunda, stone porticos with massive Corinthian columns, slightly projecting corner pavilions, and a large, central, copper dome with a state of “Miss Liberty” help to make up the dominating features of this imposing courthouse. It was created by the Texas Building Company, of Austin.

In 1935, a three-story addition was constructed at the southern wing of the building, built by the Knuston Construction Company. C.H. Page returned to design it.

A second addition, in 1957, was designed by Hedrick, Stanby, & Lightfoot and constructed by P.G. Bell & Co. Extensive subsequent renovations were completed in 1979.

Financed by an ISTEA Grant in the Nineties, the county set about rehabilitated the building’s exterior features and landscaping. The restoration effort, completed in 1997, included demolishing the 1957 annex, yet preserving the C.H. Page designed one from 1935. 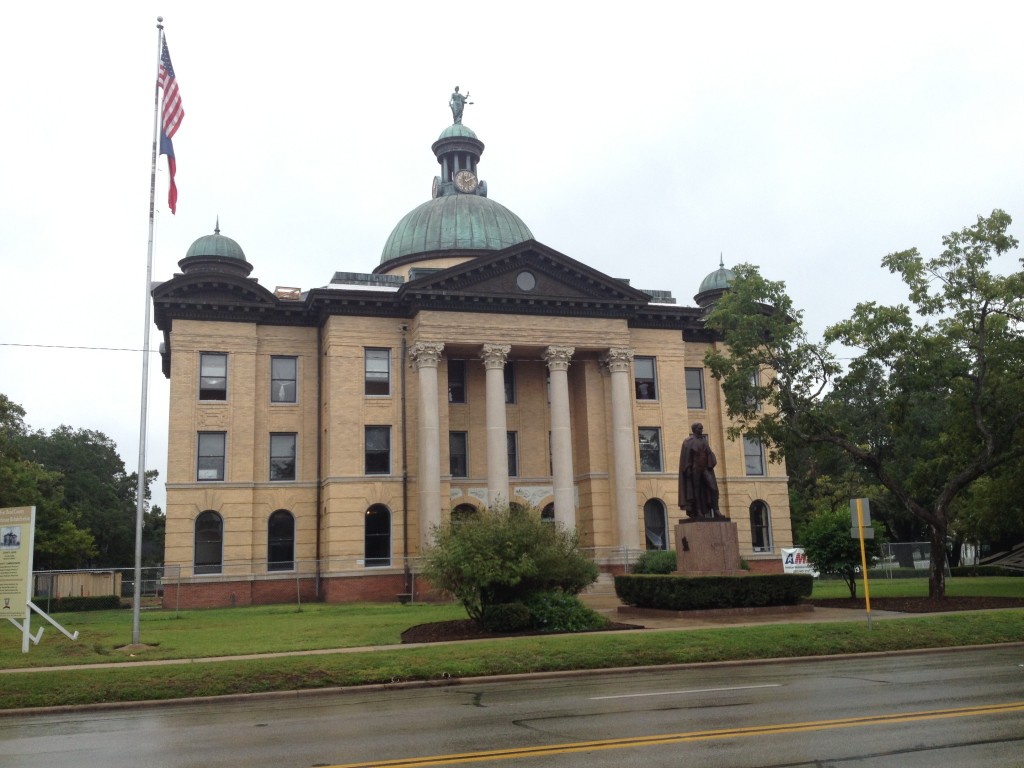 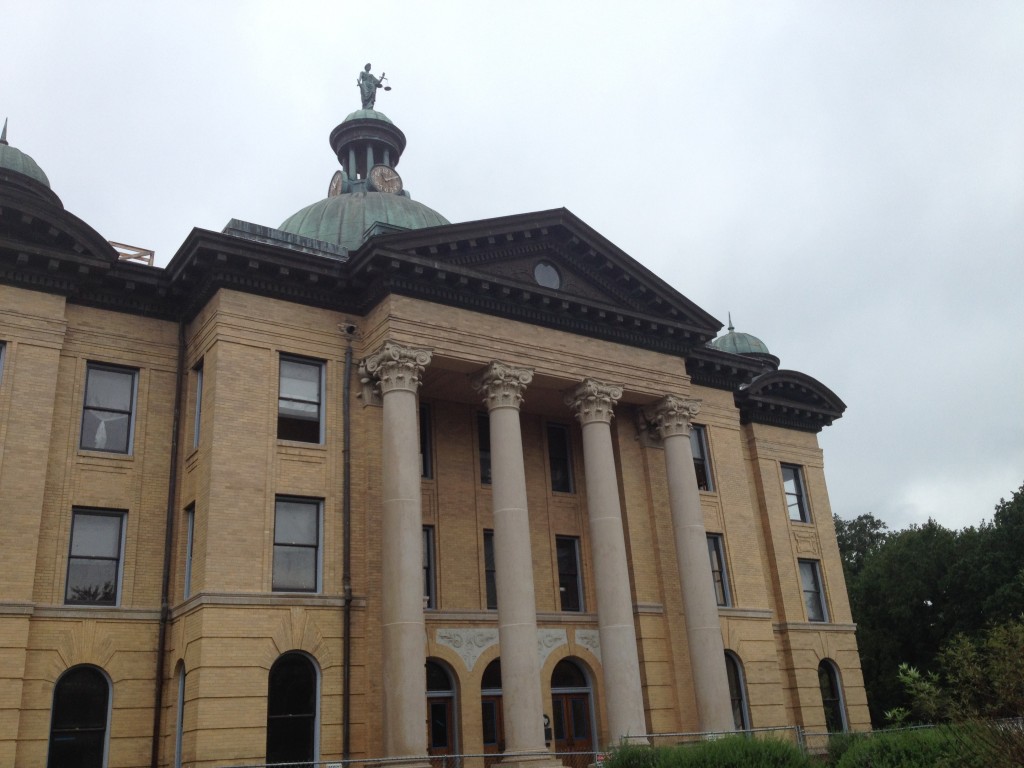 This courthouse has an impressive entrance. 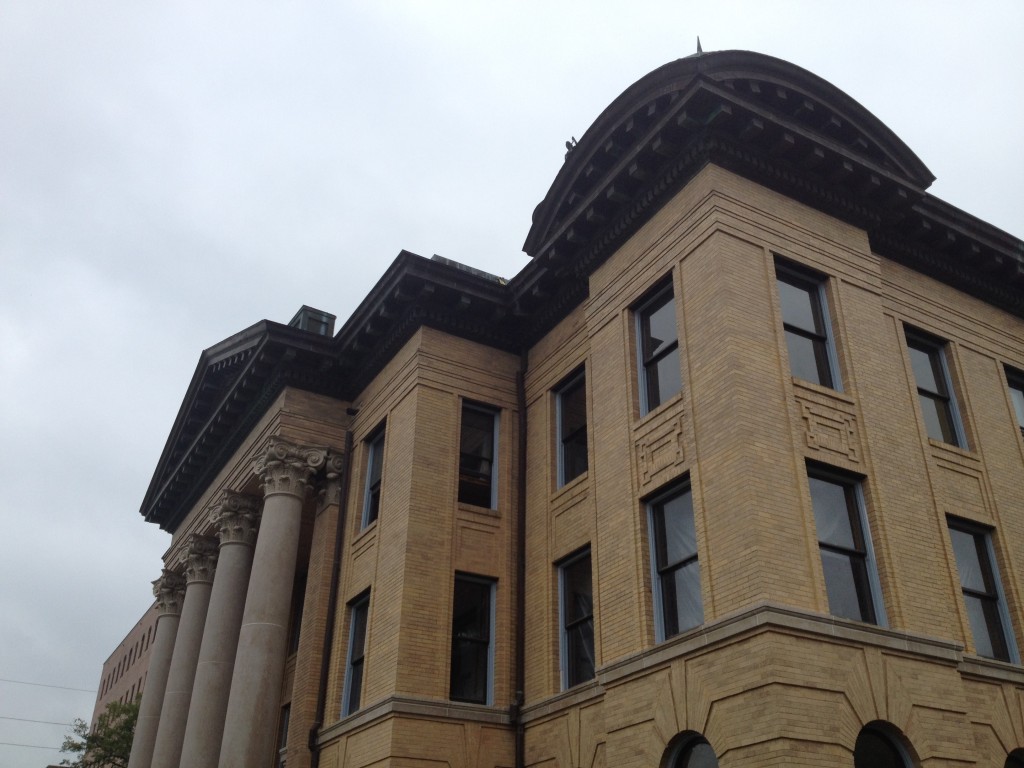 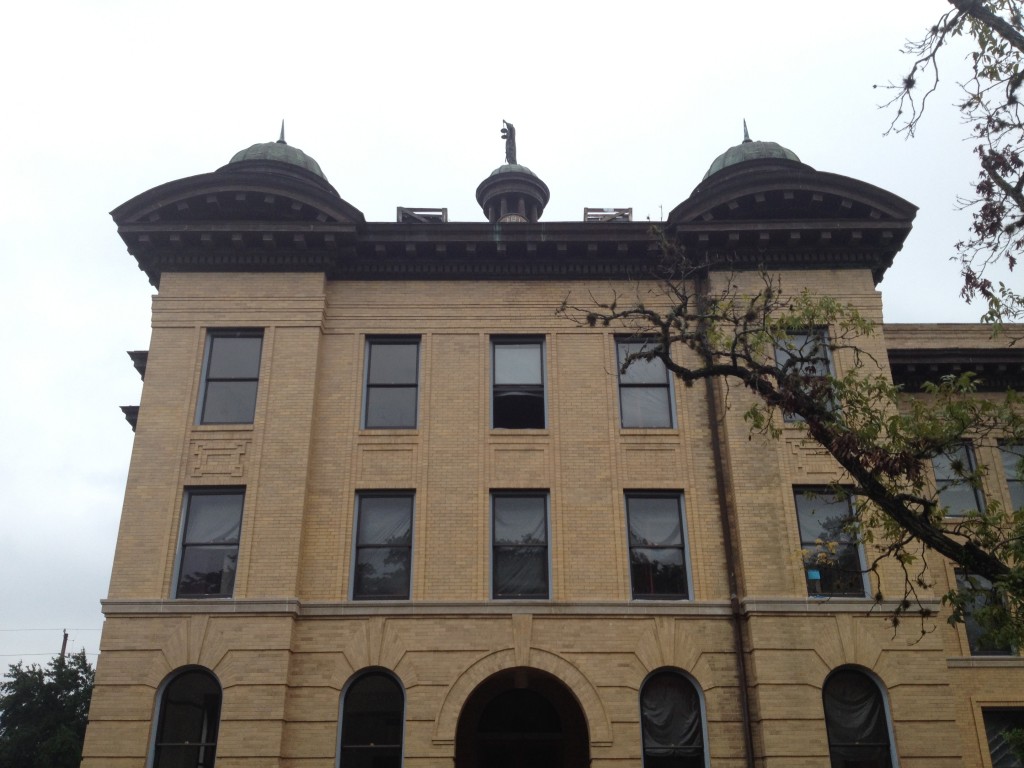 The western façade, on 5th Street 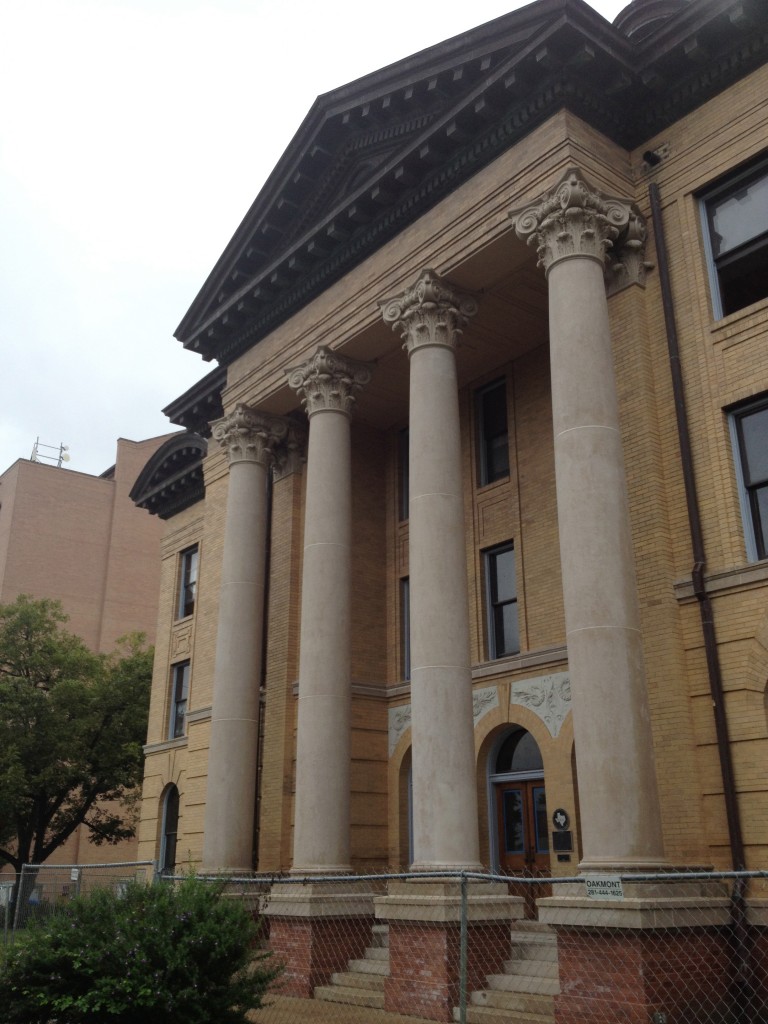 Beyond the courthouse is the William B. Travis Building, where most county officials’ offices are. 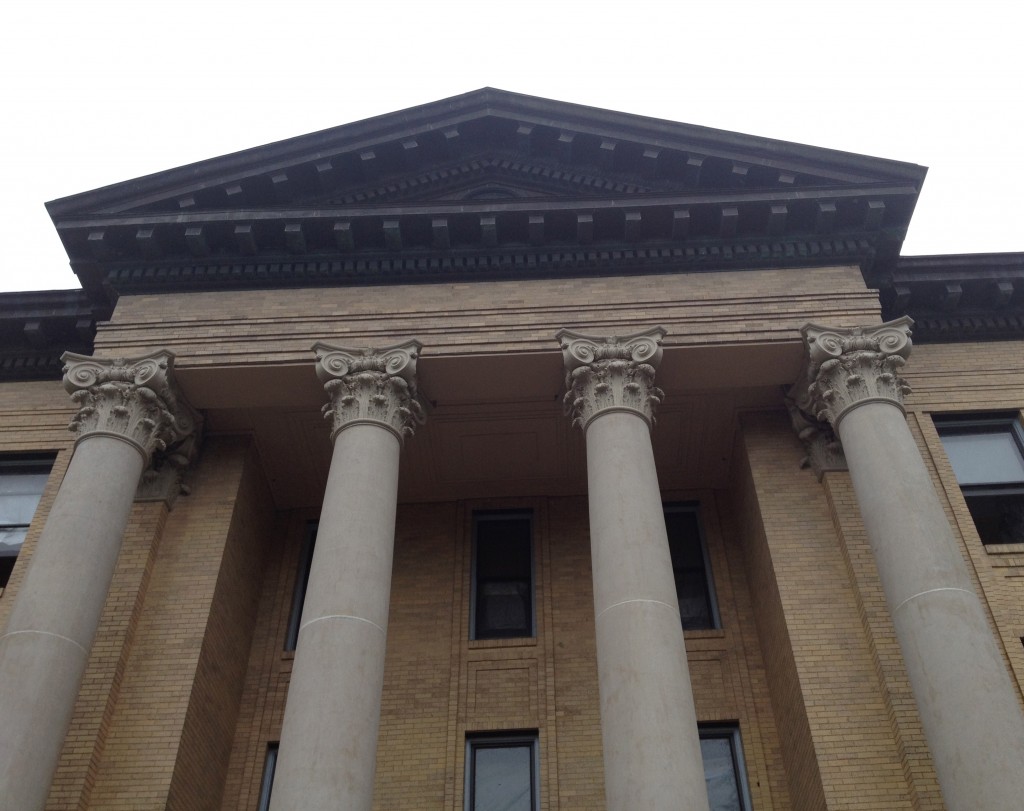 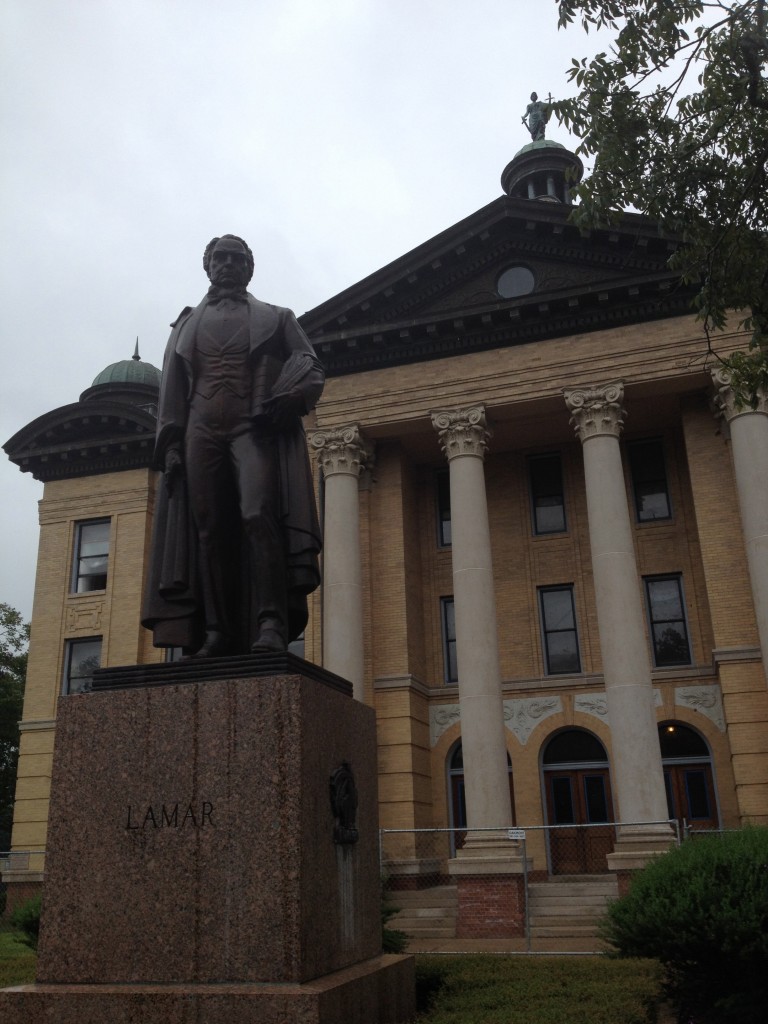 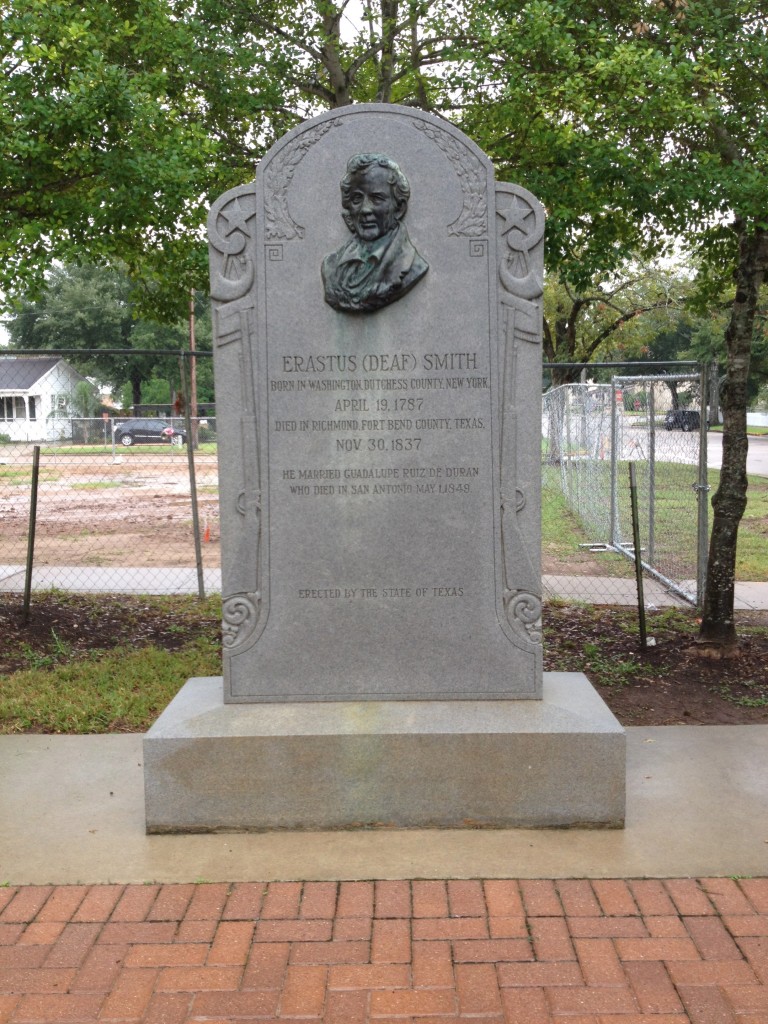 Another famous son of Richmond is Erastus “Deaf” Smith, who is famous for burning Vince’s Bridge at the Battle of San Jacinto, prohibiting the Mexican army’s escape. He is honored with a monument on the courthouse grounds. 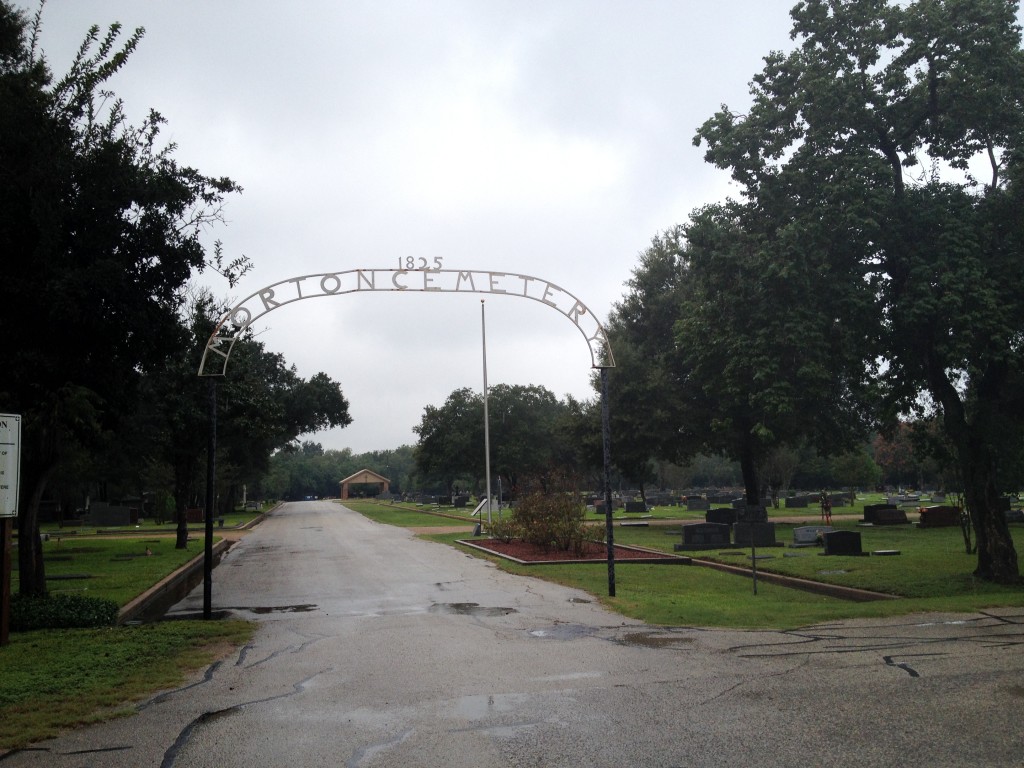 The historic Morton Cemetery on 2nd Street in north Richmond 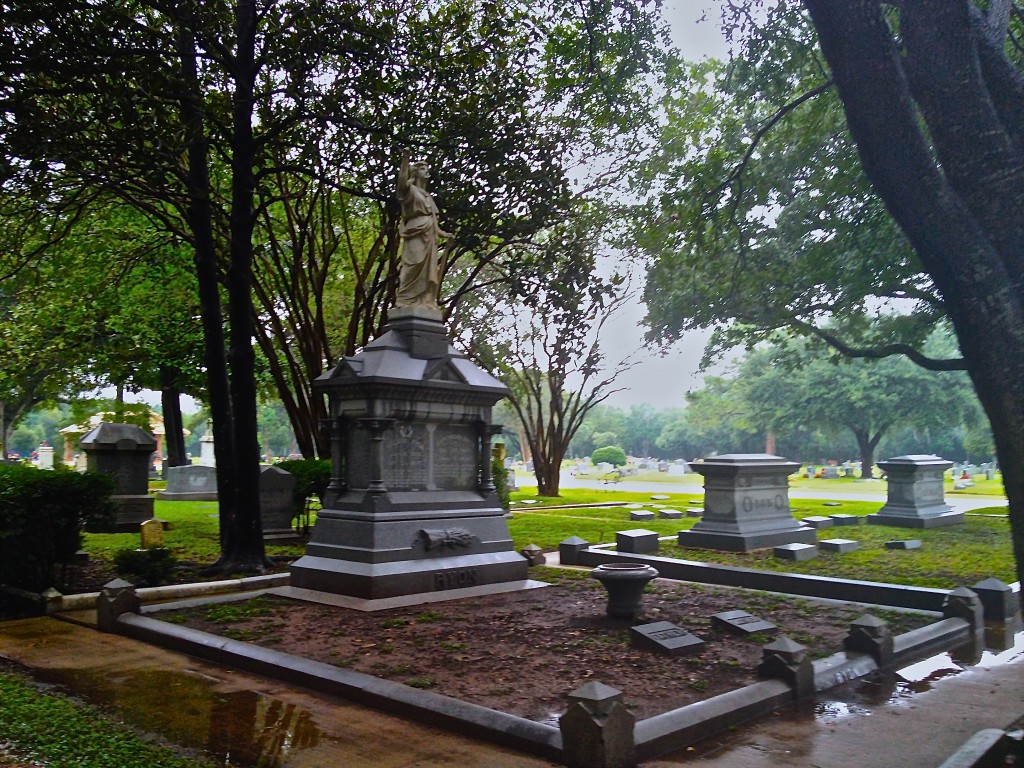 On this rainy day in Richmond, I enjoyed walking through the cemetery and admiring some of the larger monuments. 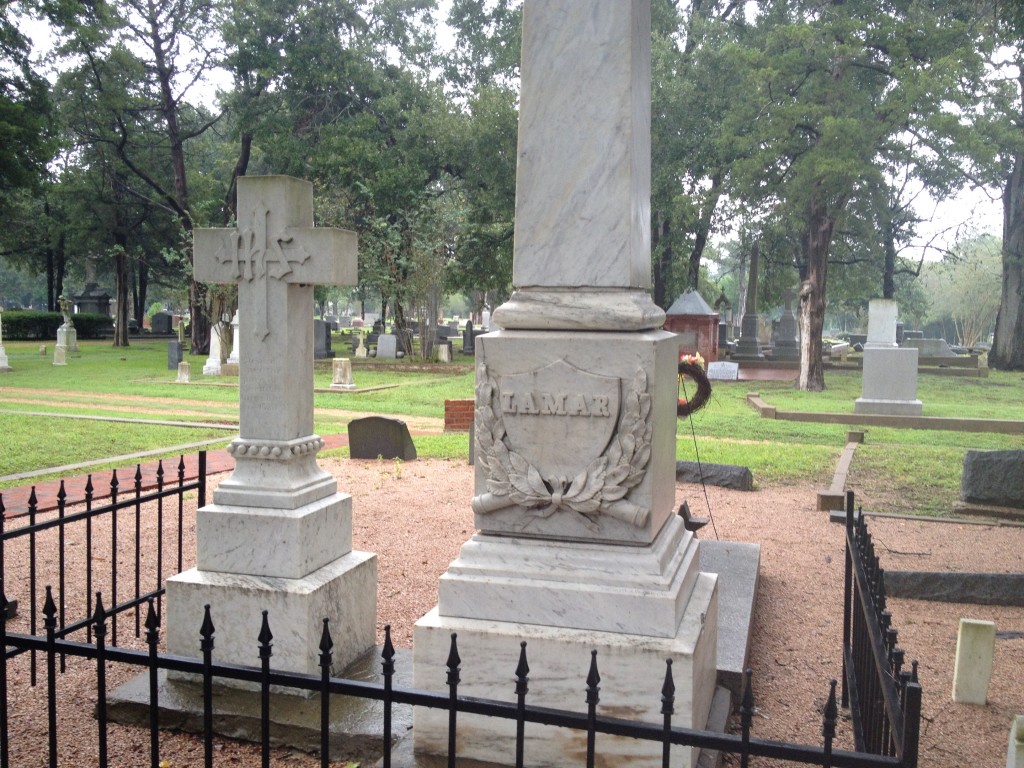 This is the final resting place of Mirabeau B. Lamar, second president of the Republic of Texas. 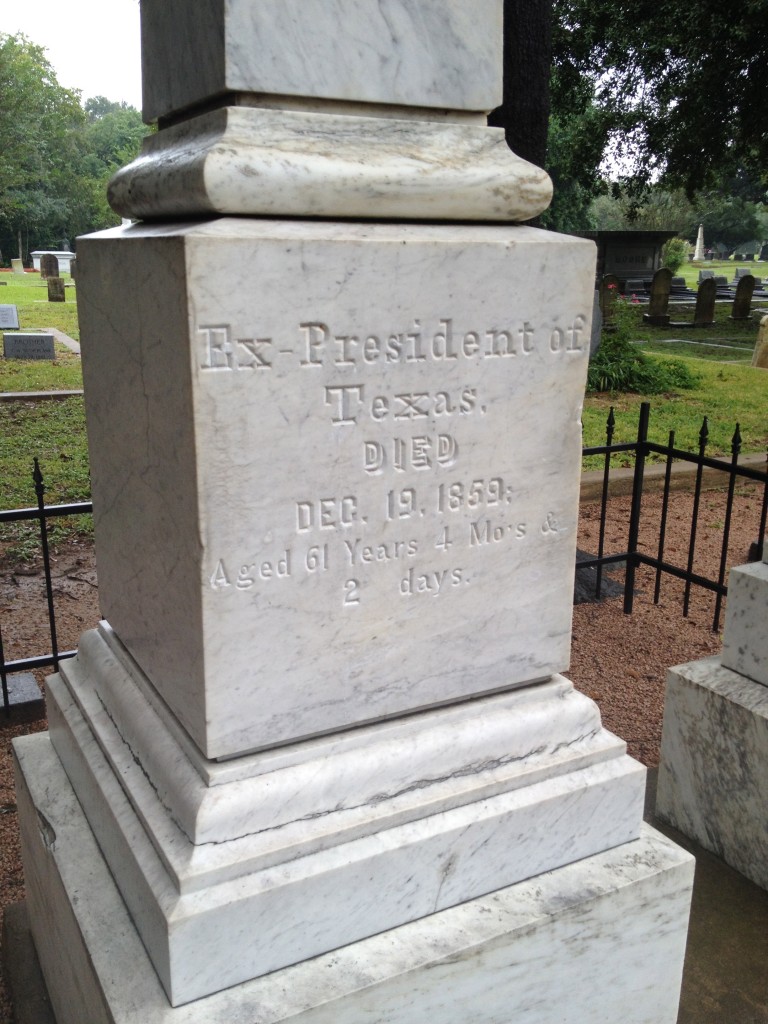 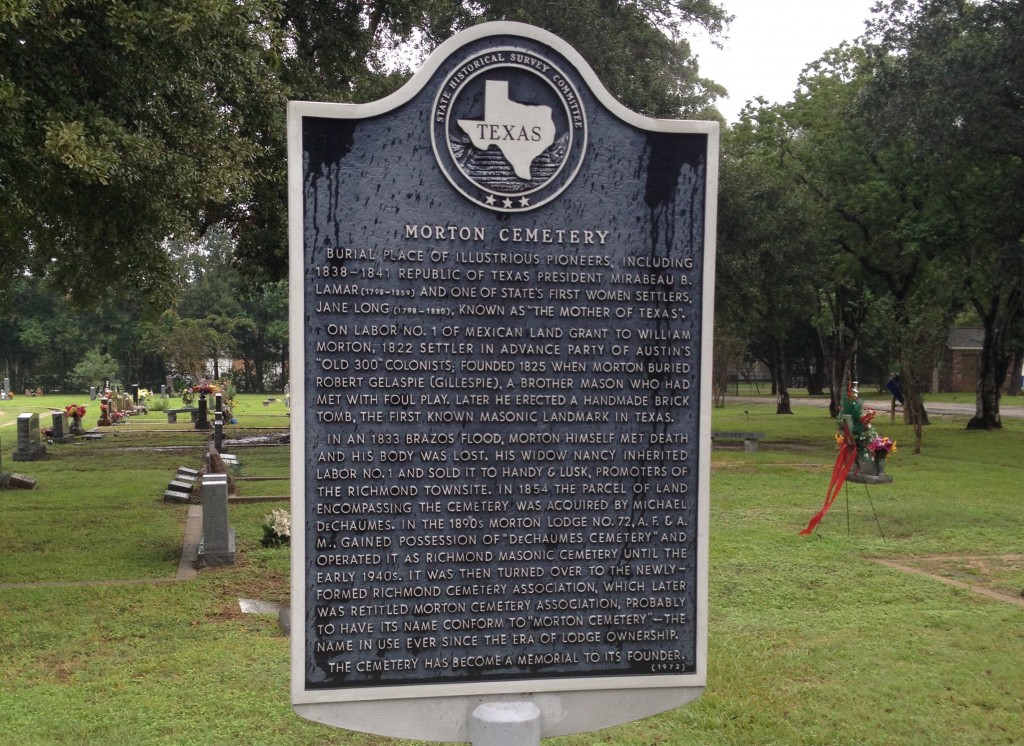