“The Colorado River bisects the county from northwest to southeast; along this waterway and its tributaries can be found rich alluvial silts and clays. Near the river, the Lost Pine Forest extends through an east central section of the county. Elevations range from 400 to 600 feet above sea level.”

“With an early road between Nacogdoches and San Antonio running through the region, in 1804 Spanish governor Manuel Antonio Cordero y Bustamante established a fort at the Colorado River crossing where the town of Bastrop now stands.”

“The Baron de Bastrop planned a German community at the site, but it was not until after Stephen F. Austin obtained a grant for a “Little Colony” from the Mexican government in 1827 that settlement began. Pioneers met with intense Indian resistance, but by 1830 the town of Bastrop, named for the baron, had been founded and settlers from Austin’s lower colonies were clearing farms over the southern portion of the county.” 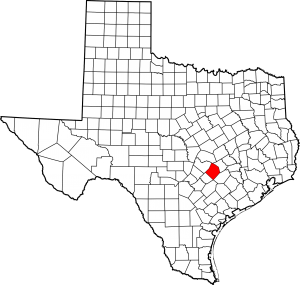 “In 1831 Austin received a second land grant; the two grants, Mina Municipality, took in almost all of what is now Bastrop County. The district was presumably named in honor of Spanish general Francisco Xavier Mina. In 1834 the vast municipality, comprising all or part of sixteen present-day counties, was established by the government of Coahuila and Texas, and the town of Bastrop also took the name Mina.”

“When Texas became a republic, Mina Municipality assumed its place as one of twenty-three original counties. In 1837 the Congress of the Republic of Texas changed the county name to Bastrop in honor of the baron and allowed the town to revert to the name as well. Congress also began whittling away at the boundaries of the huge county; in 1840, when Travis County was formed, Bastrop County shrank almost to its present dimensions.”

“In 1853 a county courthouse was constructed in Bastrop to replace the rented building that had been serving the purpose. The next year twenty-three common-school districts were reported in the county. Settlement was spreading through the southern two-thirds of the county, with many immigrants arriving from the southern United States. In addition, hundreds of German emigrants were joining the Americans or establishing their own communities, such as Grassyville.”

“Between 1850 and 1860 the population of Bastrop County more than tripled, reaching 7,006, with 2,248 slaves making up almost a third of the total and foreign-born residents totaling 700.”

“Despite the fact that the county possessed a large slave population and a growing cotton economy, Bastrop County residents voted 352 to 335 against secession. But they rallied for the Confederate cause, arming and equipping military companies and providing for soldiers’ families. Reconstruction brought tensions similar to those experienced across the South, with racial confrontations flaring around the community of Cedar Creek.”

“In 1870 Bastrop County’s population topped 11,000, and it had thirty-four manufacturing establishments. The following year brought a further stimulus to growth in the form of the Houston and Texas Central Railway, completed through the northern part of the county to connect Austin and Brenham. Towns soon sprang up along the railroad, the most substantial being Elgin. Now many farmers had a freight outlet for their harvests of corn and cotton.”

“At the turn of the century Bastrop County had 26,845 residents and was still primarily agricultural, with a peak number of farms (3,509) and peak production of cotton (41,730 bales) reported in the 1900 census. In this year the county also reported its largest number of manufacturing establishments, though the eighty-seven concerns employed only 293 people.”

“The discovery of oil in the county in 1913 led to years of oil testing and drilling at various sites. The pool found at the Yost farm four miles east of Cedar Creek in 1928 was representative of those discovered–productive but unspectacular. In the 1920s, however, oil was not the only resource being developed. County coal belts were being mined, with the Winfield mines providing lignite to various state institutions. Clay deposits around Elgin were making the town the “Brick Capital of the Southwest,” and the lumber industry around Bastrop was reviving.”

“The World War II years brought an acceleration in cattle production and an economic upsurge for Bastrop, Elgin, and other communities with the foundation of the army training facility Camp Swift in the north central part of the county. But the war also drew residents off farms to work in war plants, and many did not come back.”

“Only fourteen manufacturing establishments employing 387 workers were reported in the county in 1947; the steadiest industry was probably brick and tile manufacturing at Elgin, where two large plants were operating in the 1940s, to be joined by a third in the 1950s. Bastrop County population continued to decline, hitting a low of 16,925 in 1960. The number of farms continued to decline as well, reaching a low of 1,029 in 1969. But by then, population was gradually rising. The number of cattle continued to rise, too, with 68,769 reported in that year.”

“The beef industry remained strong through the 1970s and early 1980s, with 70,066 cattle reported in the 1982 census. But pasturelands were being taken over by suburban development as the growth of nearby Austin produced growth in Elgin, Bastrop, and such smaller communities as Cedar Creek and Red Rock. By 1980 the county population had risen to 24,726 and was soon to surpass the 1900 high of 26,845. As of 2014, the population of the county was 78,069. The census classified 55.8 percent of the population as Anglo, 34.2 percent as Hispanic, and 8 percent as African American. The three largest communities remained Elgin, with 8,757 people, Bastrop, with 7,949, and Smithville, with 4,125.”

“Elgin hosts Western Days in June and the Hogeye festival in October.” 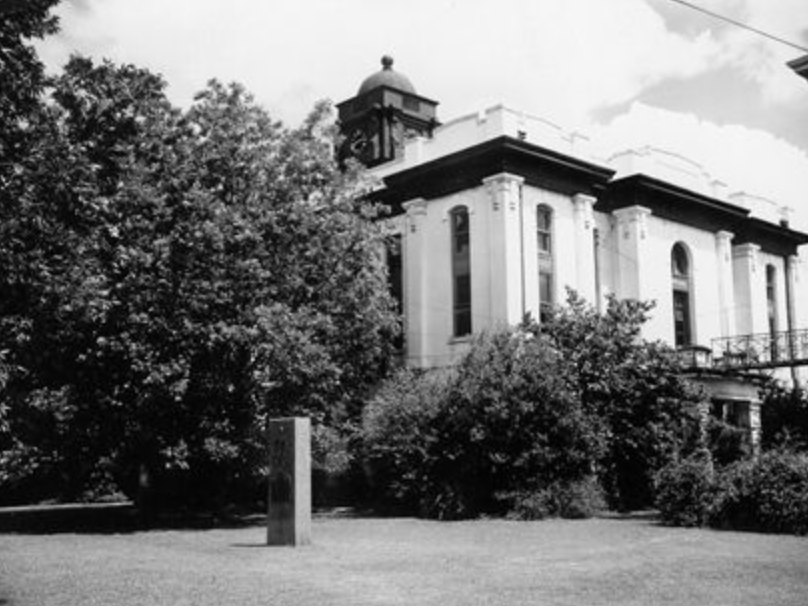 The Bastrop County Courthouse of today is the third for the area, replacing an 1852 version that burned the same year this one went up, and a pre-Texas Revolution log cabin from 1832.

Commissioners selected Austin architect Jasper N. Preston to design this courthouse, with associate architect F.E. Ruffini (also of Austin) serving alongside him. The creation they drafted was constructed from red brick and stone and featured pedimented gables, decorative caps on its corner pavilions, and a three-tiered, central clock tower.

The design is said to have been akin to one built in Colorado City in Mitchell County, but not many photos of it survive. That’s because it was heavily modernized in 1923 by the C.H. Page and Bros. firm. The process included removing the courthouse’s original roof and pediments and replacing them with a flat roof and a copper cap. Additionally, the red brick was covered with a beige colored plaster and the interior was heavily altered.

What stands today appears much more in line with the Mission-style, a school of colonialist Spain-like architecture. 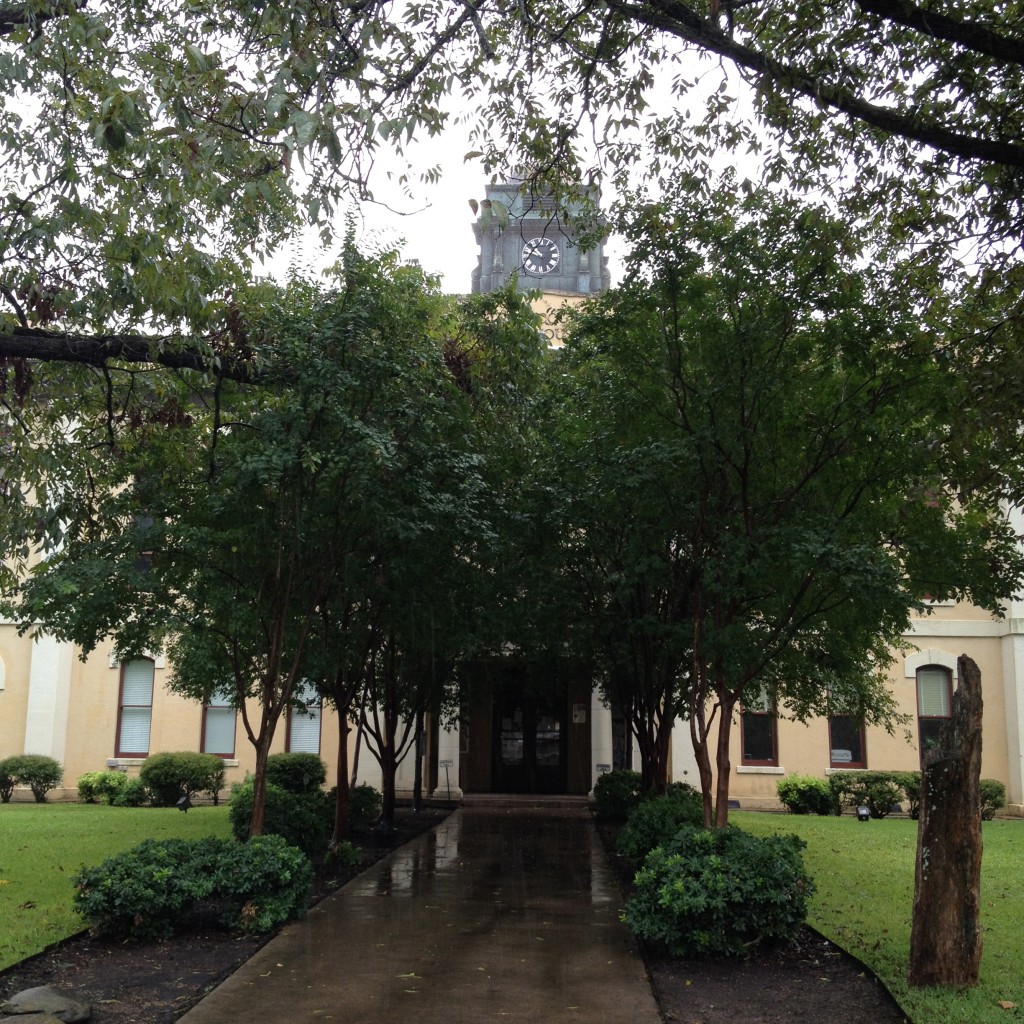 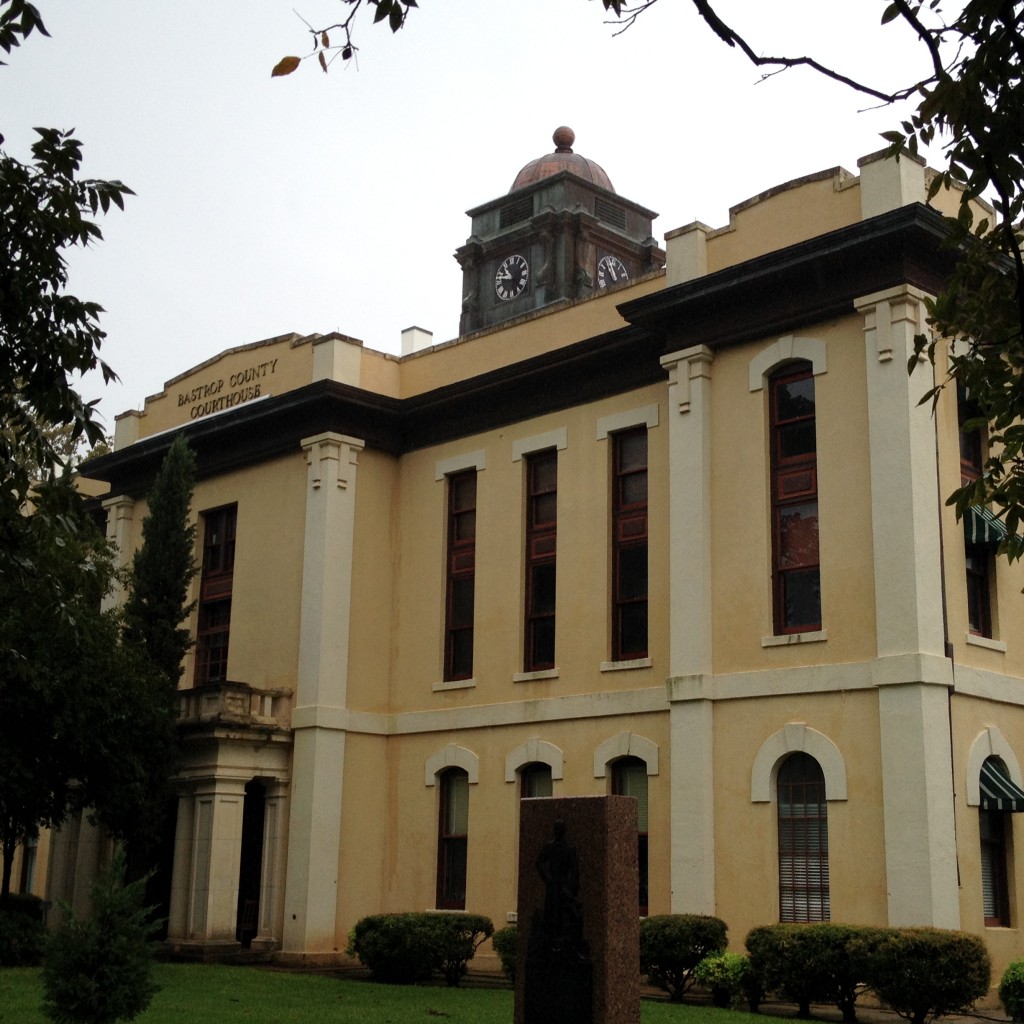 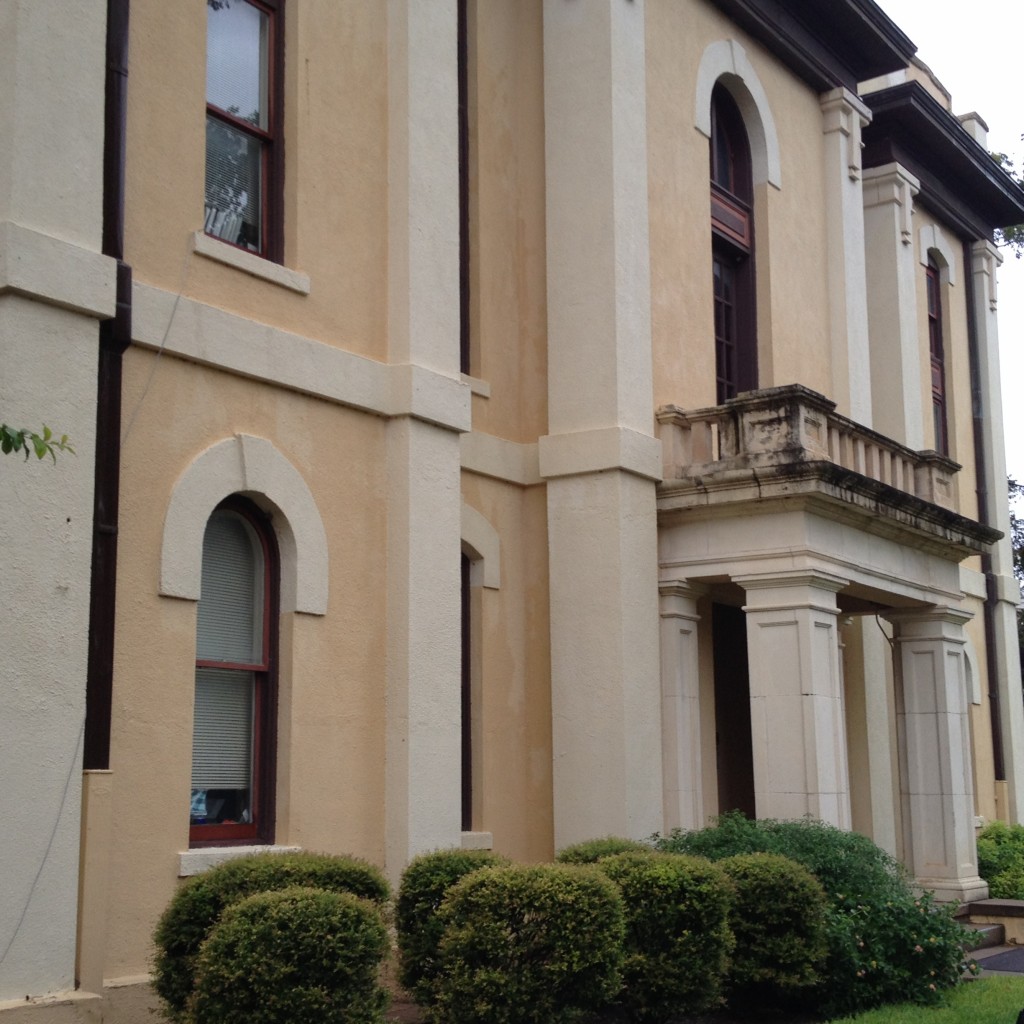 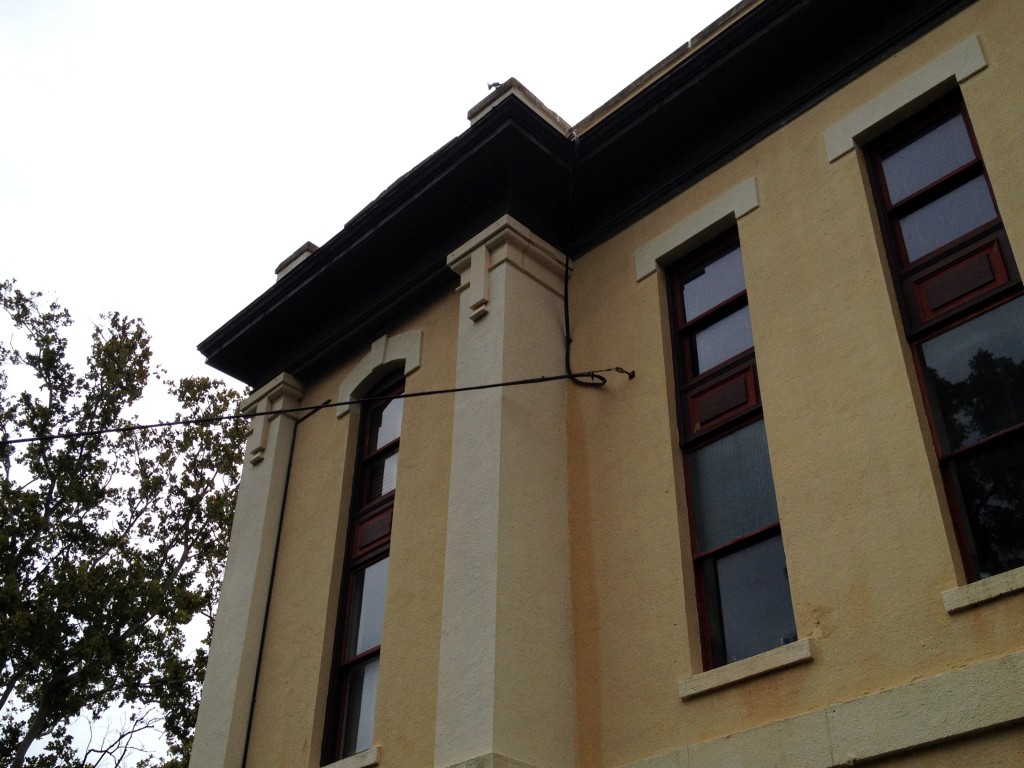 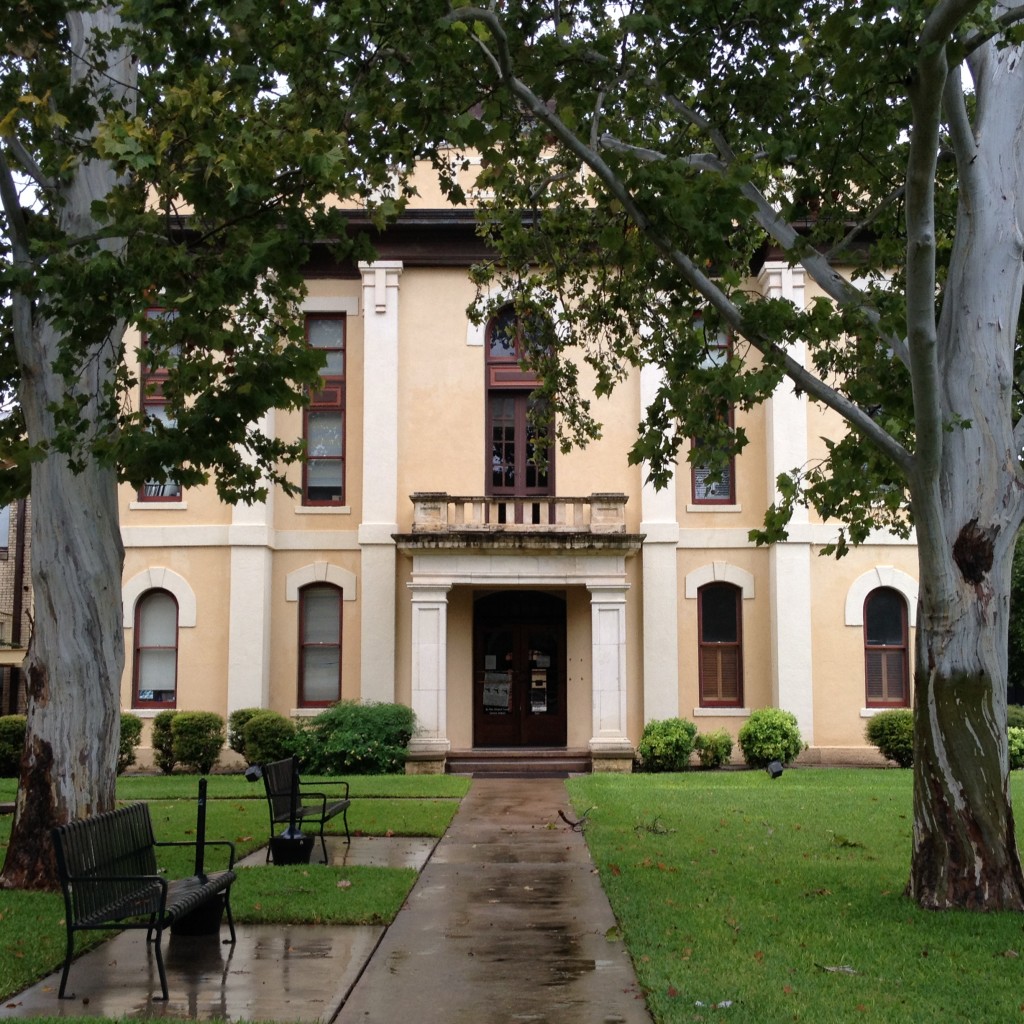 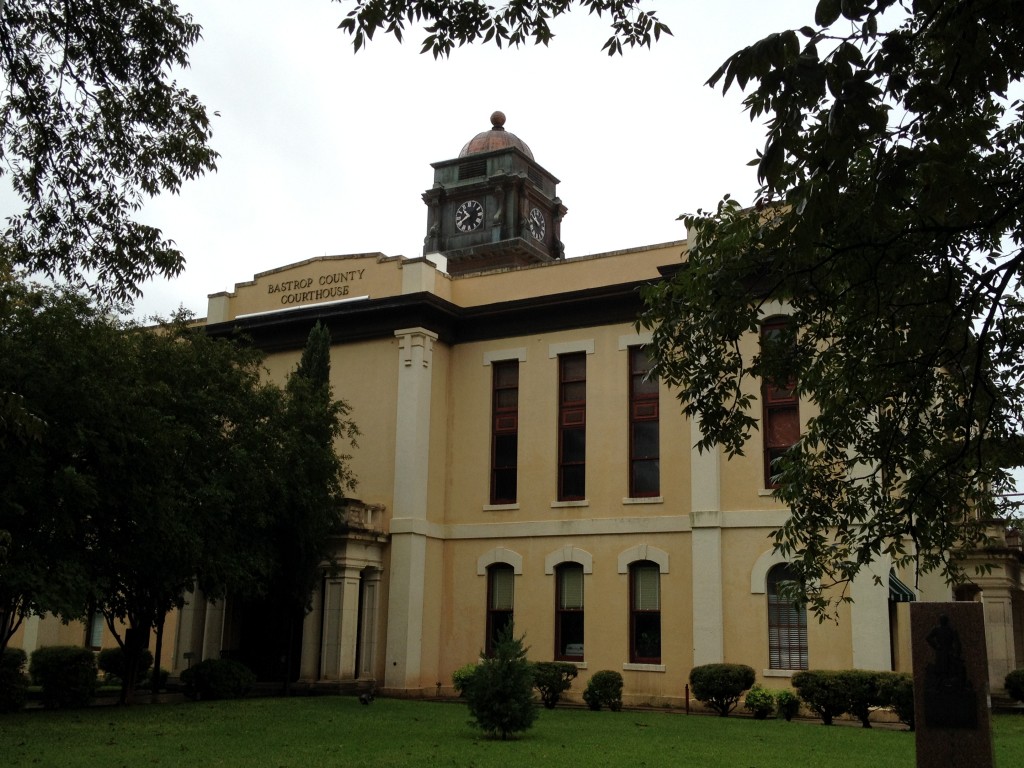 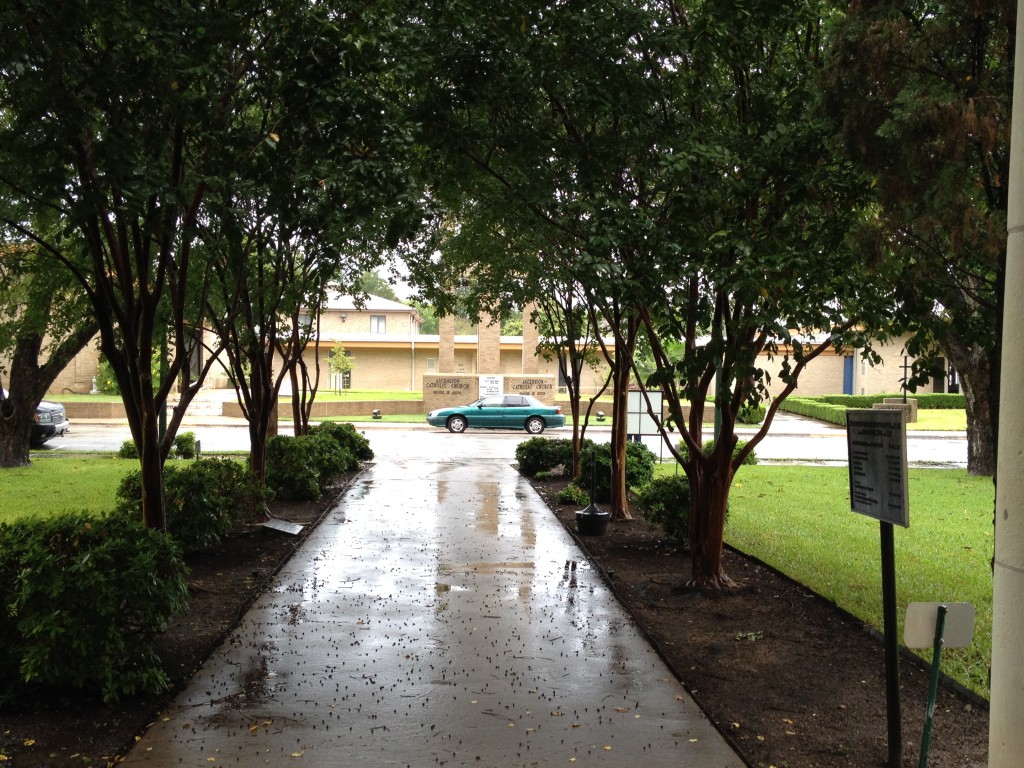 This is the view from the main entrance, towards Pine Street. 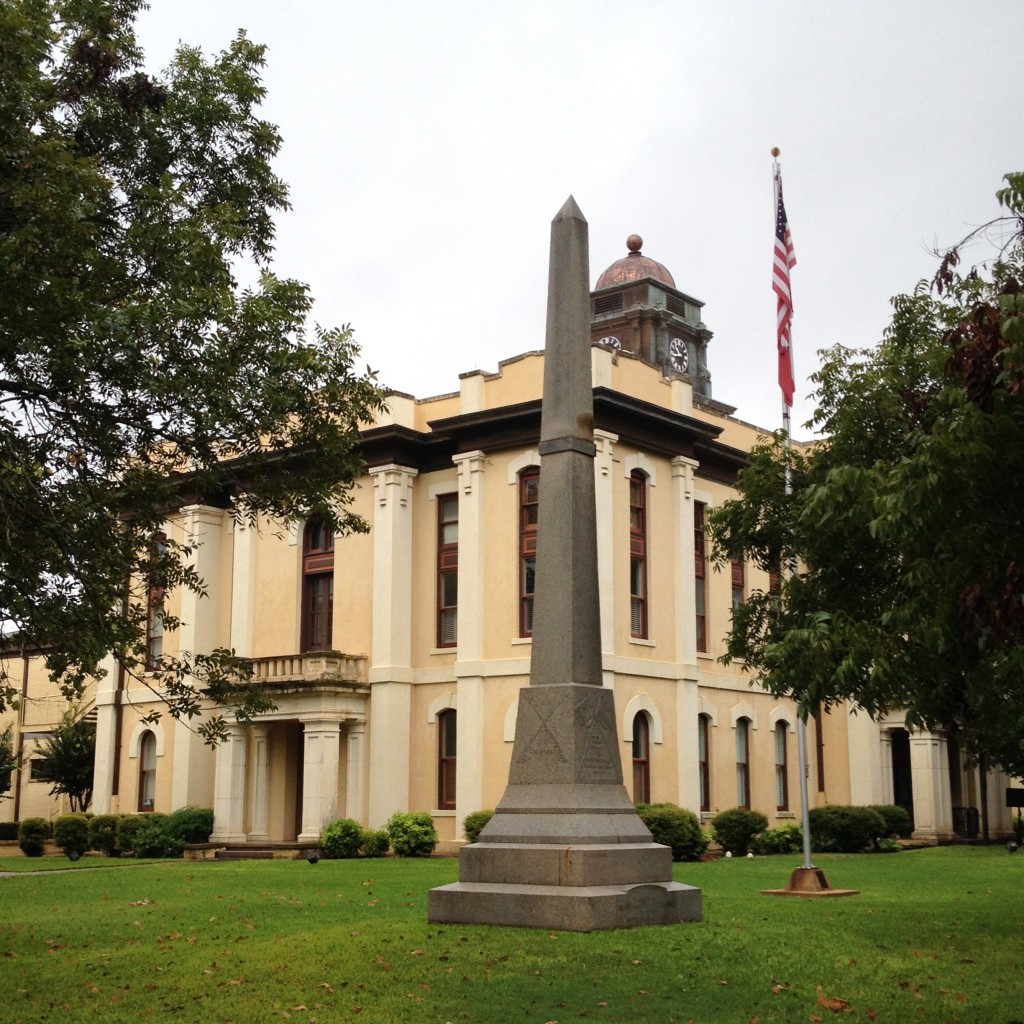 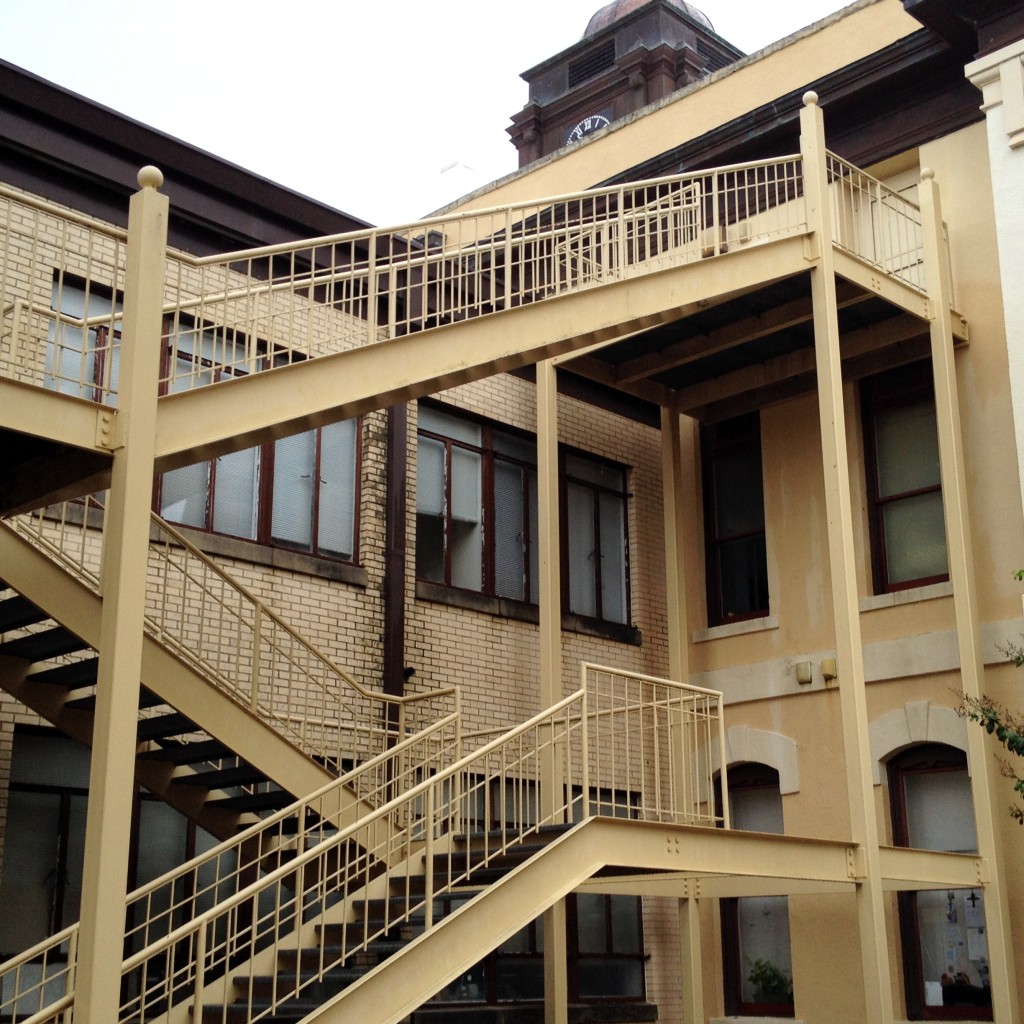 The historic jail is adjacent to the courthouse. 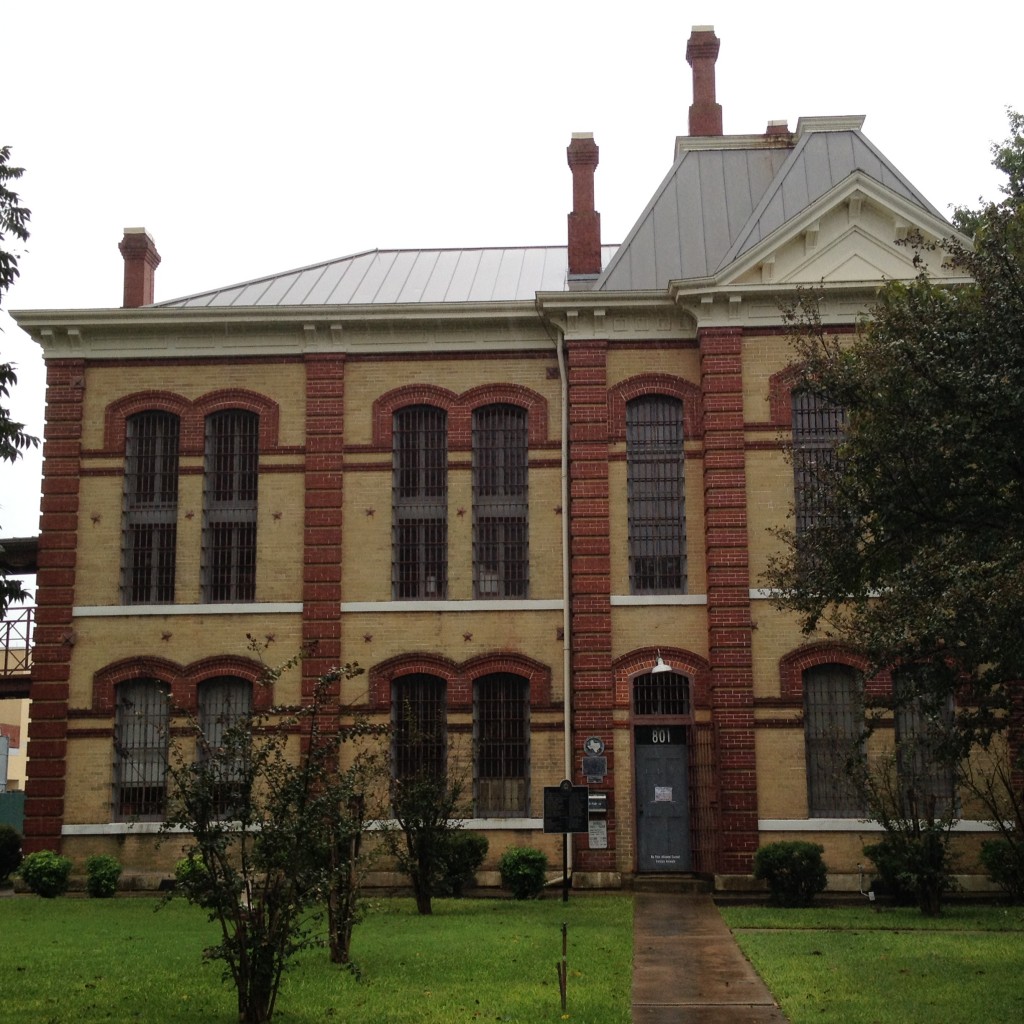 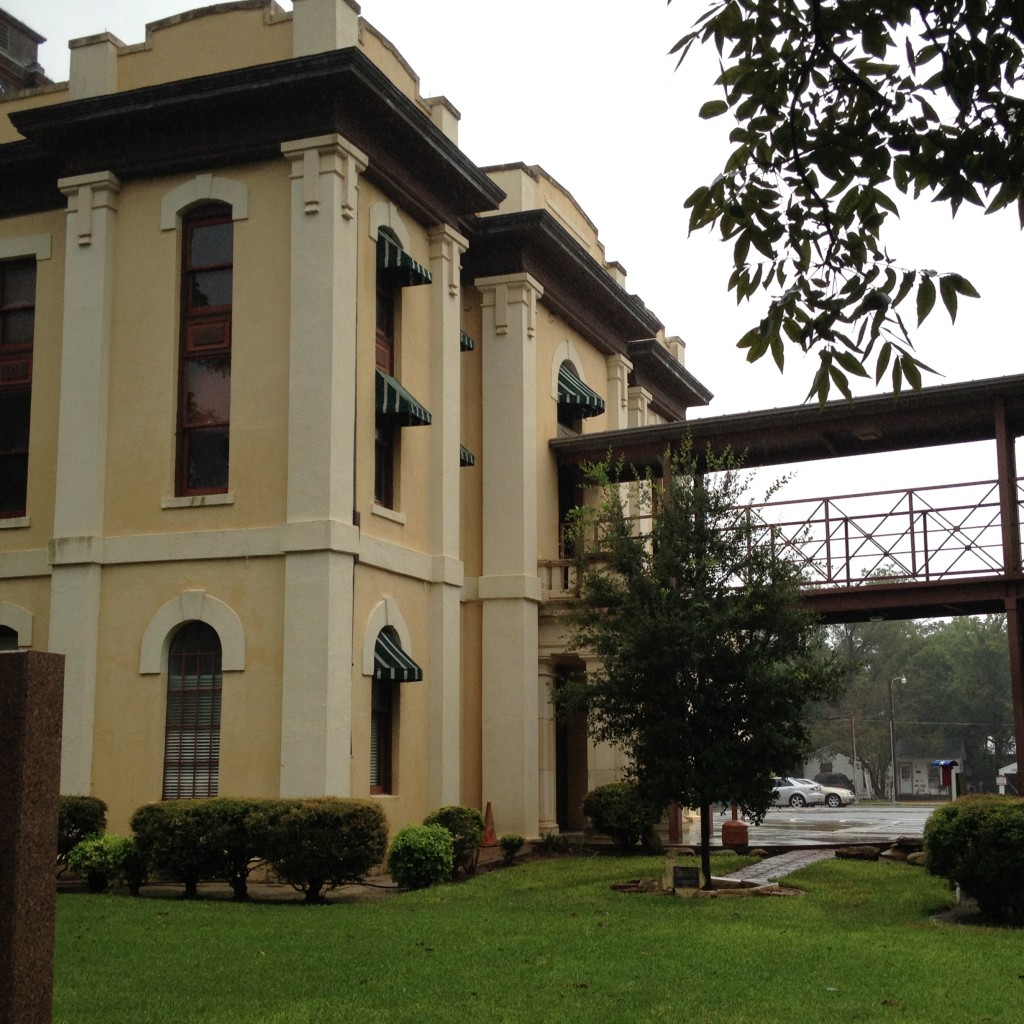 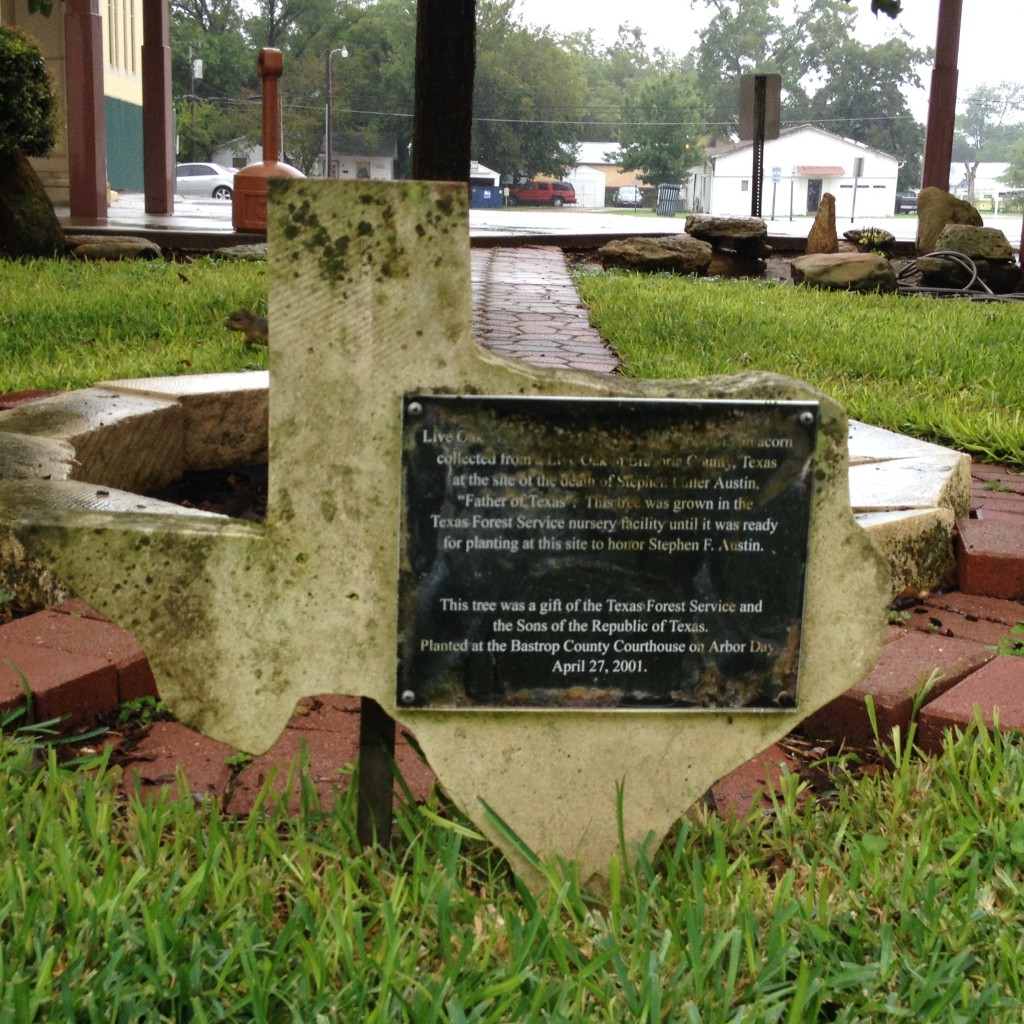 A tree on the courthouse grounds was taken from Stephen F. Austin’s death site. 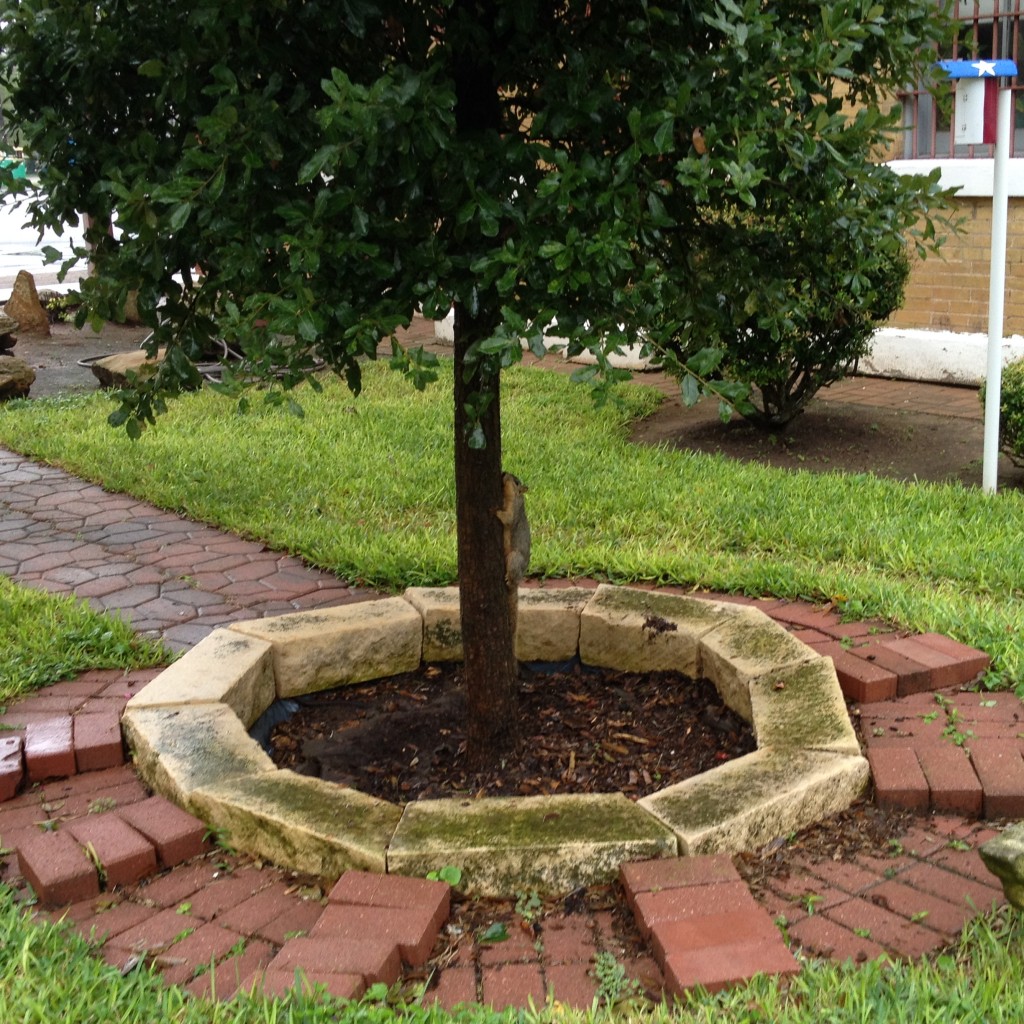 Not only humans pay homage to Stephen F. Austin with this tree. 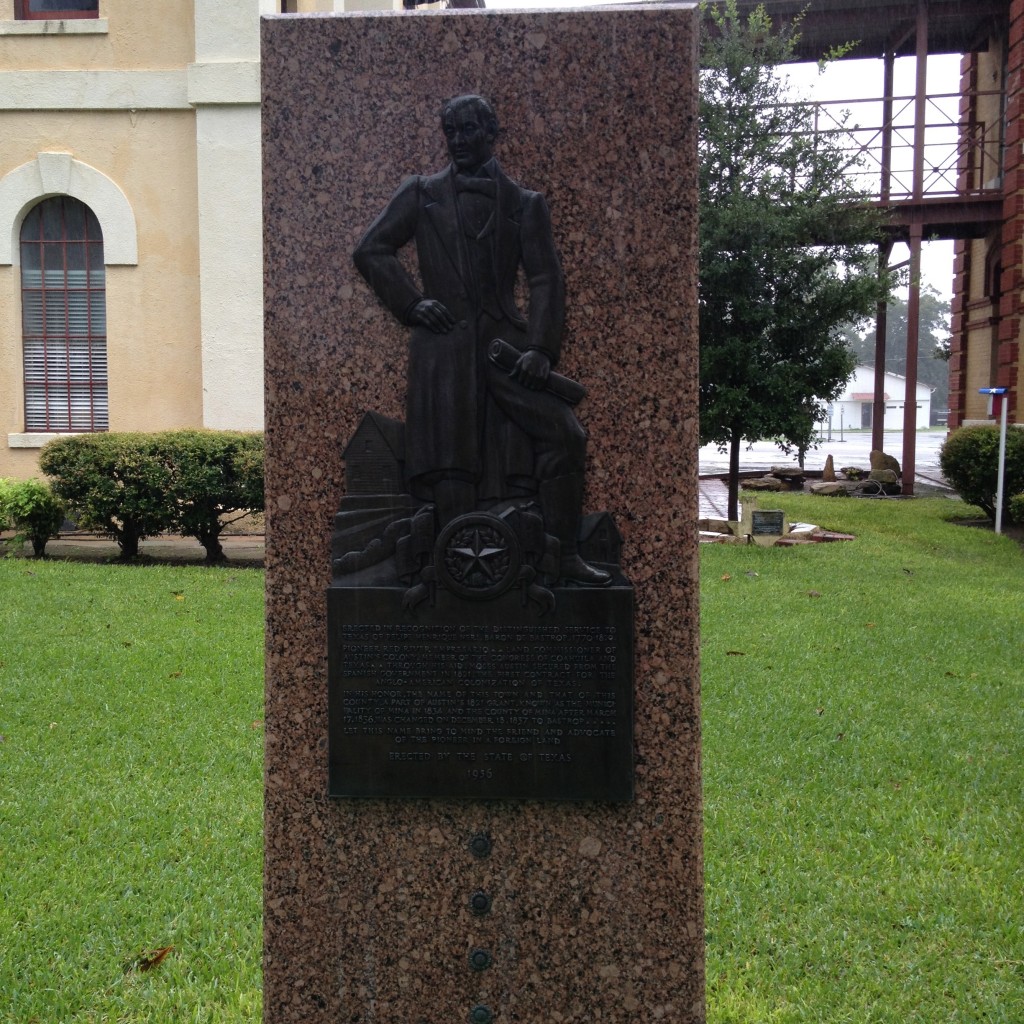