“Burleson County covers 668 square miles in the Post Oak Belt region of Texas. Most of its area features undulating to hilly terrain except for the broad alluvial valley along its eastern border, covering nearly one-fourth of the county’s surface, which is nearly level. Its elevation ranges from 225 feet above sea level in the southeast to 475 feet in the northwest. The entire county lies within the drainage basin of the Brazos River, which marks its eastern border.”

“Anglo-American settlement within the bounds of the future Burleson County began some time after the founding of Stephen F. Austin‘s first colony in the early 1820s and proceeded very slowly. The Old San Antonio Road was specified as the northern boundary of the colony, yet before the mid-1830s only a handful of settlers had actually taken up residence in the territory south of the road and north of Yegua Creek.”

“In October 1830 Fort Tenoxtitlán was established by Lt. Col. José Francisco Ruiz on a high bluff on the west bank of the Brazos, about twelve miles above the crossing of the Old San Antonio Road in what is now northeastern Burleson County. In defiance of his instructions, the Texas-born Ruiz permitted a group of more than fifty Tennesseans led by Sterling C. Robertson to take up residence in the vicinity of the fort in November 1830, while Robertson attempted to validate the settlement contract that his Nashville Company had negotiated with the Mexican government some years earlier.” 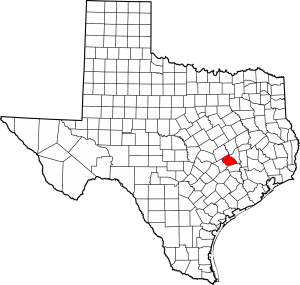 “[A]s white inhabitants became more numerous in the sparsely populated territory, Indian raids became more frequent. The settlers often responded to rumors of impending hostilities by taking refuge at Tenoxtitlán or within the fortifications at the home of William Oldham, in what is now southern Burleson County. But Tenoxtitlán itself became a favorite target of Indian attacks. The last fatal raid within the bounds of the present county occurred in May 1841, the final occasion on which the white population repaired to the forts for defense. With settlement expanding westward and northward, Tenoxtitlán became increasingly inaccessible, and its protection grew less important as the Indian menace diminished rapidly during the 1840s.”

“In 1835 the region north of the road became part, first, of Milam Municipality, and then of Milam County, after the foundation of the republic in 1836. The territory south of the road and north of Yegua Creek was initially included in Washington Municipality, organized in 1835, and then in Washington County in 1836. In 1840 the area of the present county south of the Old San Antonio Road was transferred from Washington to Milam County. A small settlement and trading post established by Lewis L. Chiles by 1840 at the place where the Old San Antonio Road crossed Davidson Creek in what is now Burleson County was chosen to become the seat of the newly constituted Milam County.”

“A new townsite, soon known as Caldwell, was platted in 1840 by George B. Erath. Finally, on March 24, 1846, the state’s First Legislature established Burleson County, named for Gen. Edward Burleson, and designated Caldwell the county seat. The county acquired its present boundaries in 1874, when its western reaches beyond East Yegua Creek were given to the new Lee County, thus reducing Burleson County by some 31 percent.”

“During the final antebellum decade the county began to acquire an unmistakable flavor of the Old South, as many large plantations were established on the fertile alluvial soils of the Brazos bottoms in the eastern part of the county. These plantations accounted for much of the county’s agricultural production. Cotton and corn were virtually the only crops raised, aside from fodder crops and vegetables.”

“By 1856 post offices had been established in the communities of Caldwell, Brazos Bottom, Chance’s Prairie, Lexington (now in Lee County) and Prospect. Caldwell, near the geographical center of the county, was a transportation hub and by 1856 had attained a population of 300; until the early 1850s all county roads ran through the town, which was the site of one of the region’s finest hotels, the Caldwell House.”

“Although Burleson County had received a trickle of foreign immigration from the beginning, as late as 1870 the foreign-born constituted only 2 percent of the county’s population. In the 1870s, however, substantial numbers of Germans and Austrians began settling in communities throughout the county, from Cooks Point in the east to Deanville in the west. During the 1880s large numbers of Czechs began to settle in many parts of the county; like the Germans they often formed distinct enclaves within older communities, but they also founded several all-Czech towns as well, including Frenstat, New Tabor, and Sebesta, later known as Snook. In the 1890s farmers in the Brazos bottoms in need of agricultural labor assisted in settling considerable numbers of Italians, mostly Sicilians, in eastern Burleson County, where they were initially employed as sharecroppers.”

“Economic recovery from the Civil War was slow. By 1870 the value of Burleson County farms had fallen to just 35 percent of their value in 1860. In 1870 no county residents were listed among the owners of property worth $100,000. However, by the end of the nineteenth century the development of cotton farming and the livestock industry had restored much of the county’s former economic vitality.”

“Major reconfiguration of the county’s agriculture began in the 1930s, as cotton acreage began to decline under the impact of continuing low prices, diminishing soil fertility, and New Deal acreage-reduction programs. The 91,021 acres devoted to cotton cultivation in 1930 dropped by almost half by 1940. The decline continued over the next half century, so that by 1987 cotton was grown on only 8,431 acres in the county. Although the yield remained as high as 27,355 bales as late as 1950, by 1987 that figure had fallen to 13,740.”

“Under the stimulus of increasing economic diversification and industrial development after World War II, Burleson County at last resumed growth. The number of manufacturing establishments in the county increased from four in 1947 to twelve in 1982, and the number of employees in the manufacturing sector rose over the same period from 260 to 400.”

“Much of this new industrial activity arose in the vicinity of Caldwell, which after 1940 regained from Somerville its former position as the county’s largest town. In 1940 Caldwell’s population stood at 2,165, Somerville’s at 1,621. In 1990 Caldwell had 3,181 residents; Somerville, Snook, and Lyons were the only other towns with populations greater than 150. Although agriculture was still the county’s preeminent economic activity, significant employment had been produced in other sectors of the economy in the previous few decades.”

“One of the most important aspects of late-twentieth-century development was the construction of Somerville Dam and Reservoir on Yegua Creek in 1967. Somerville Lake became one of the most prominent recreation areas in south central Texas, attracting several hundred thousand visitors annually and providing stimulation for the county’s economy. Furthermore, construction of the lake finally helped end the disastrous flooding of Yegua Creek and the Brazos River, which has plagued the county throughout its history; and it at last rendered obsolete such ineffectual flood-control measures as the thirty-mile-long levee on the west bank of the Brazos, first erected by landowners in 1910.” 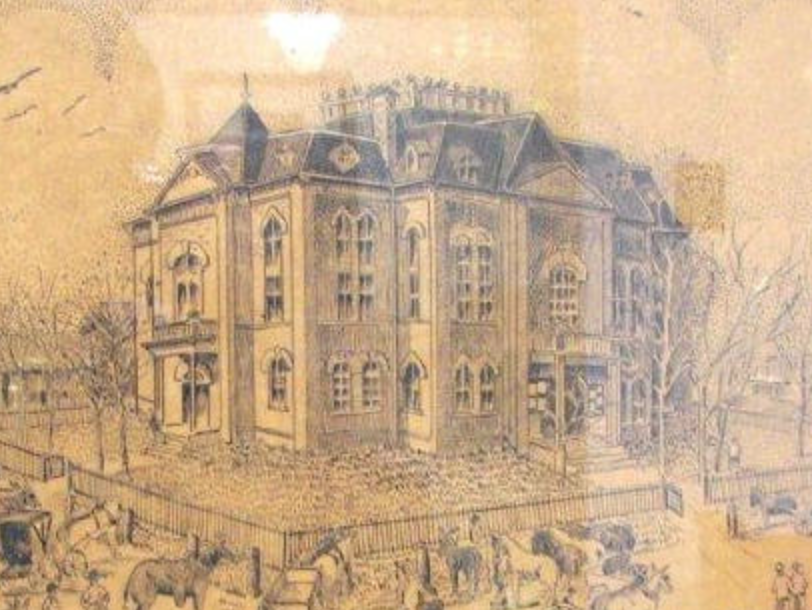 Little information is still readily available about this building. It was known to have been constructed by the popular courthouse contracting team, Martin, Byrne, and Johnston, but much else is unknown by me. Sometime before 1927, it met its end. 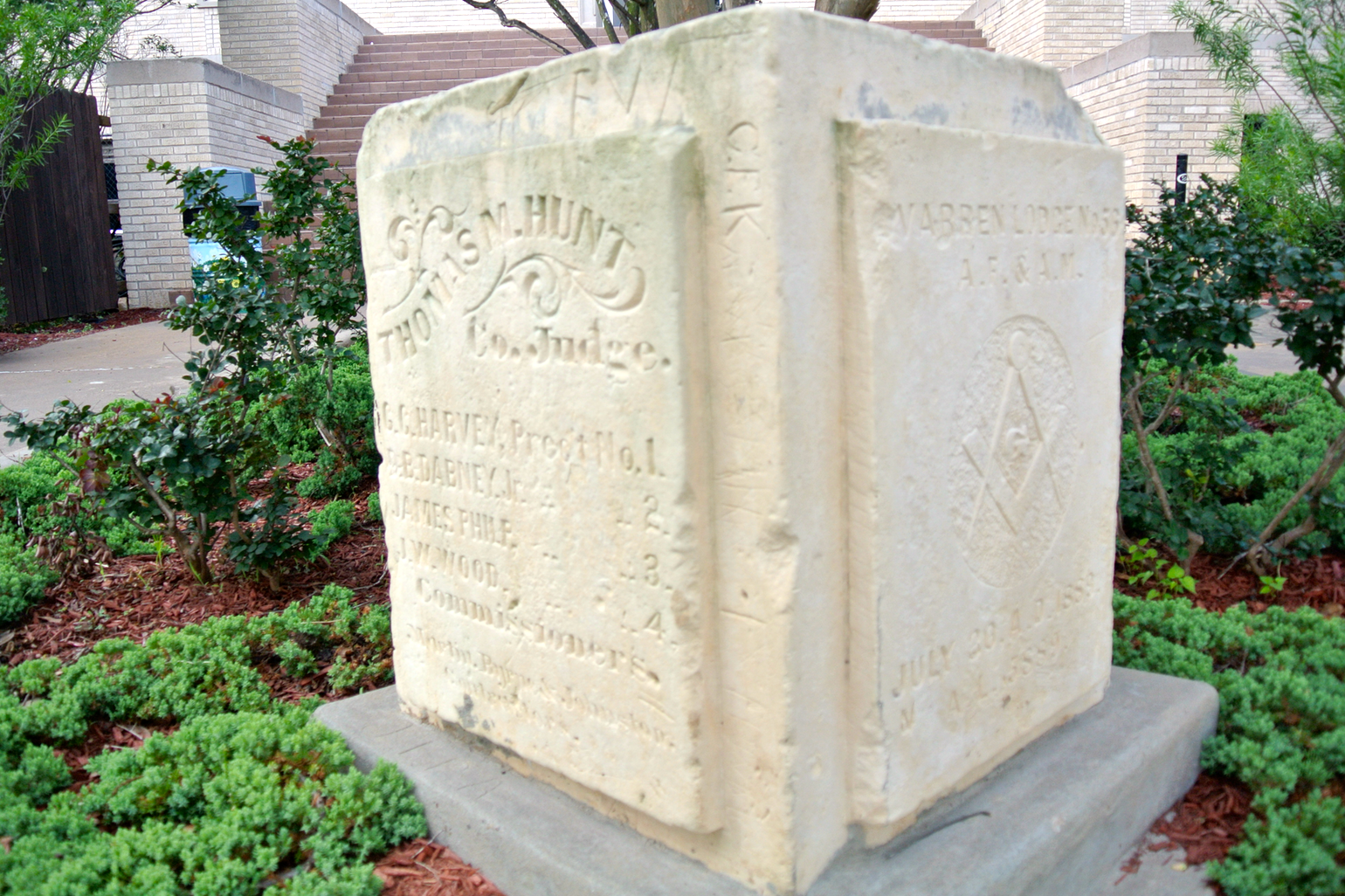 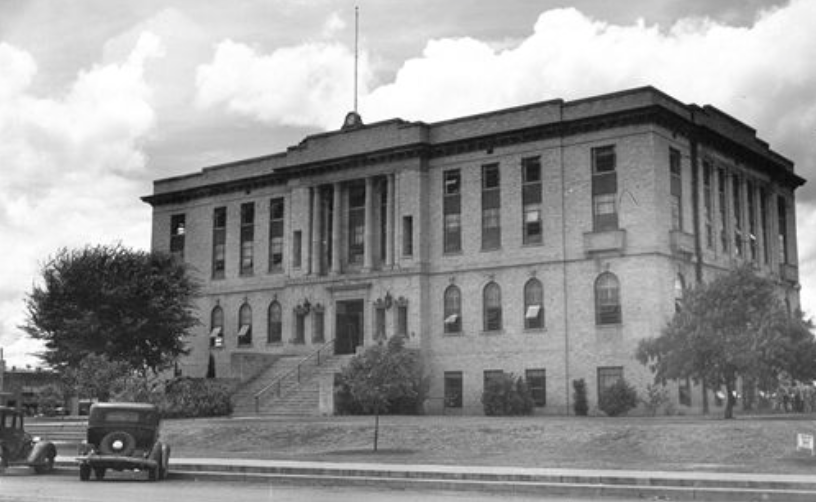 This Classical Revival building was designed by J.M. Glover, and constructed by T.B. Hubbard Construction Co. The Texas Historical Commission describes the courthouse as a:

“4-story, brick, rectangular building with classical details and Italianate cornice. The windows on the first (raised basement) level are square, the windows on the main level are round arches, and the windows on the third and fourth levels are rectangles set in the same openings in the brick–separated by panels. The facade features a shallow center pavilion with a classical entrance and a recessed area above with Tuscan-style columns alluding to a classical loggia. The roof is obscured by a parapet wall that runs the perimeter and steps up at the center pavilions.” 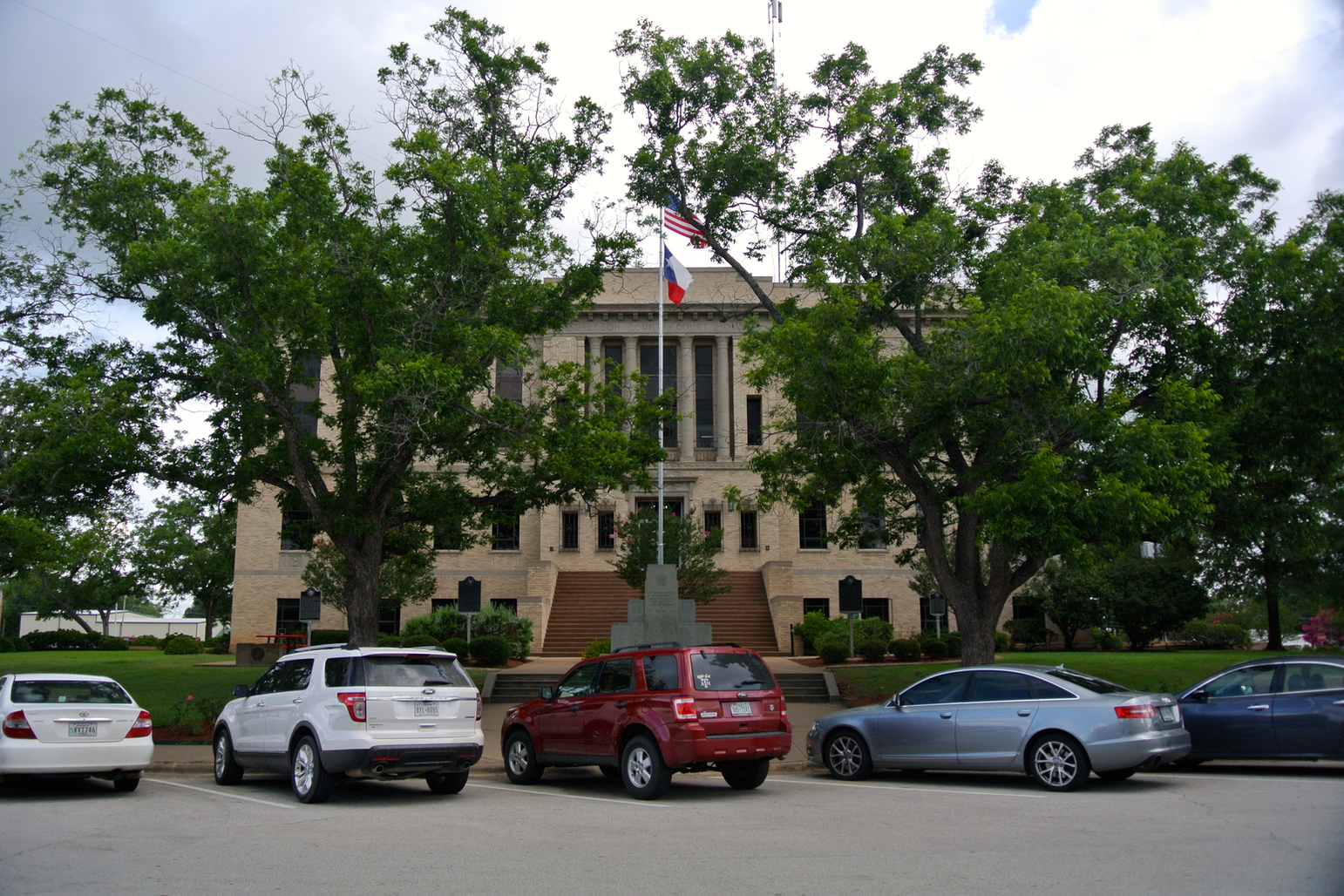 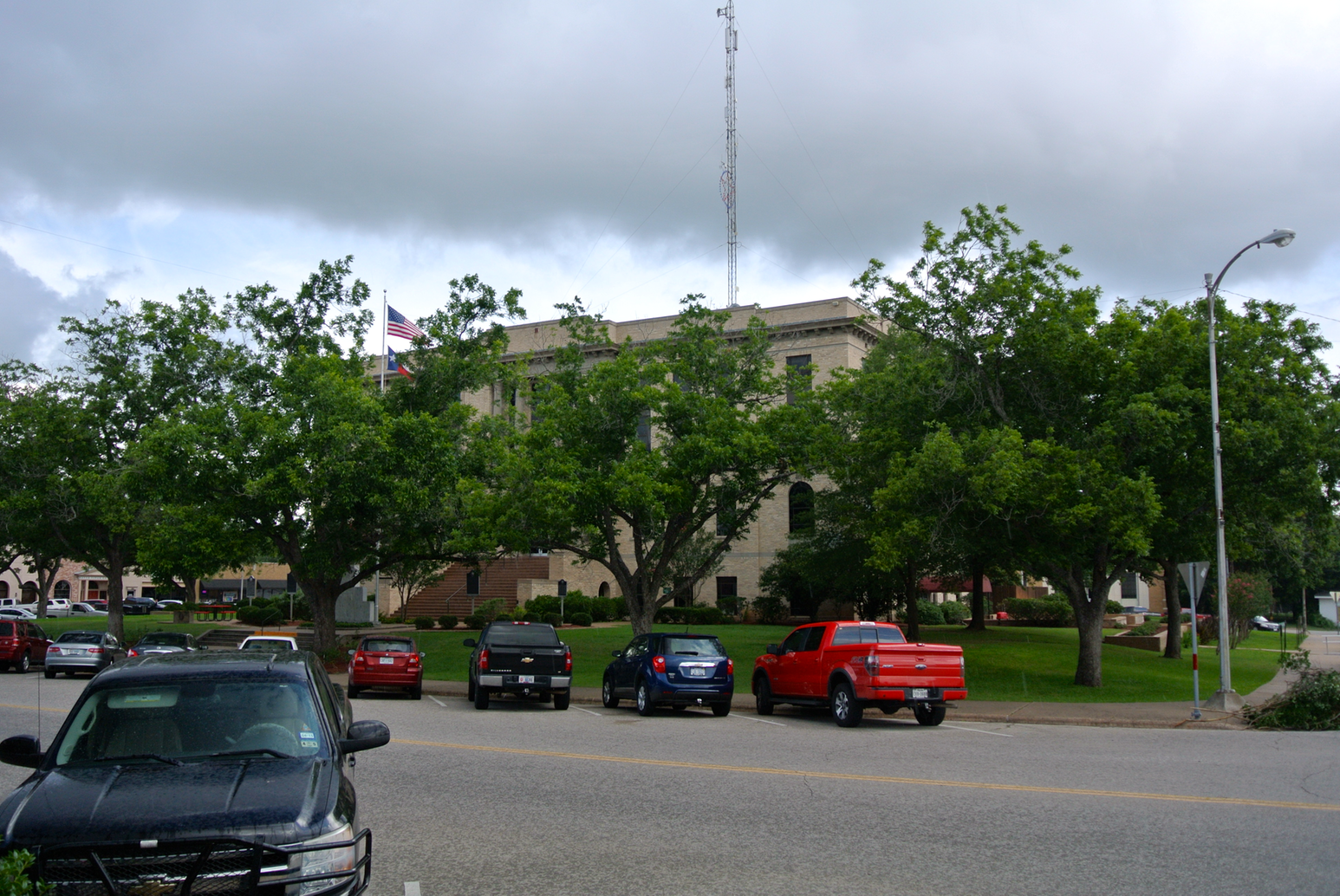 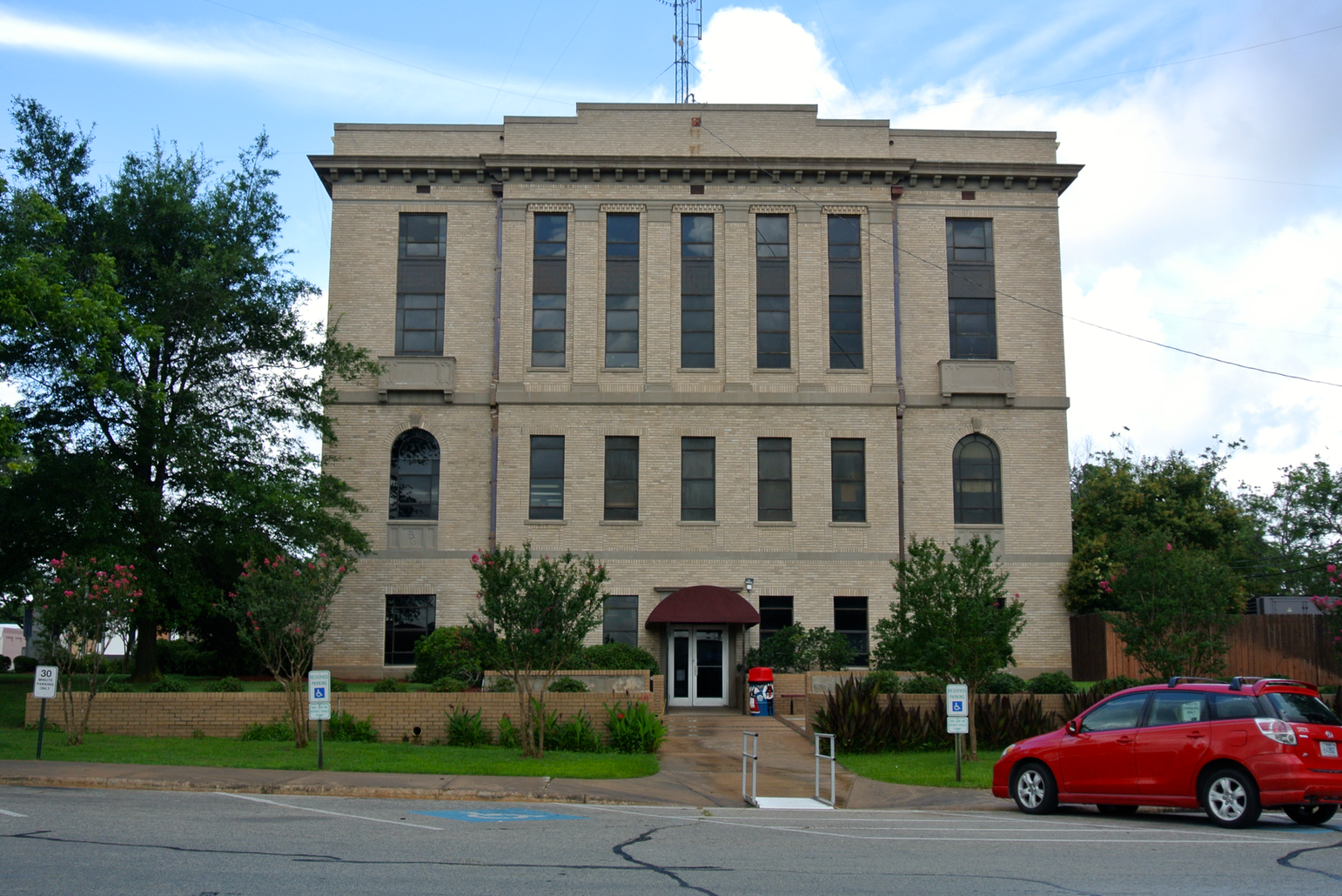 The northeast façade, on Main Street 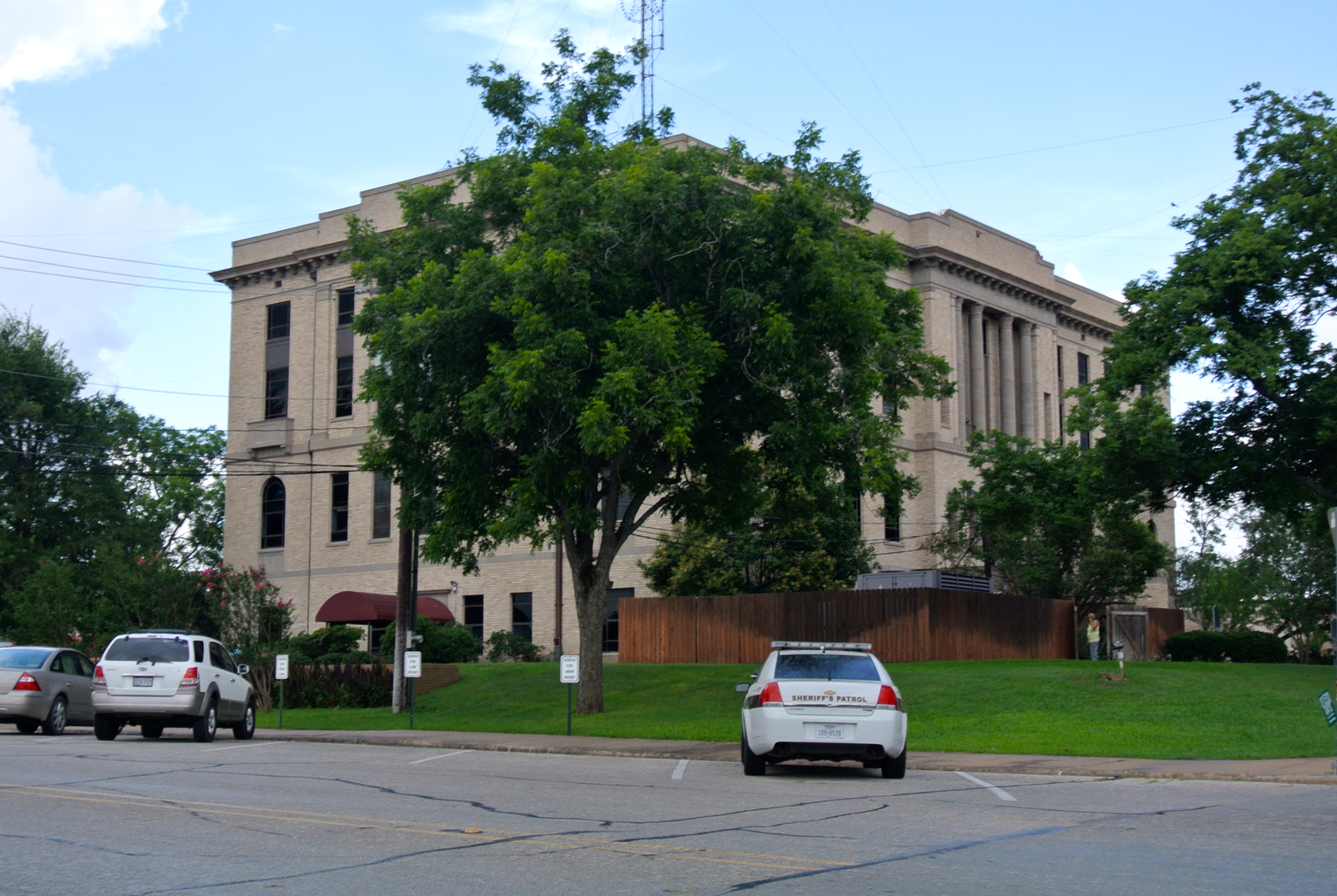 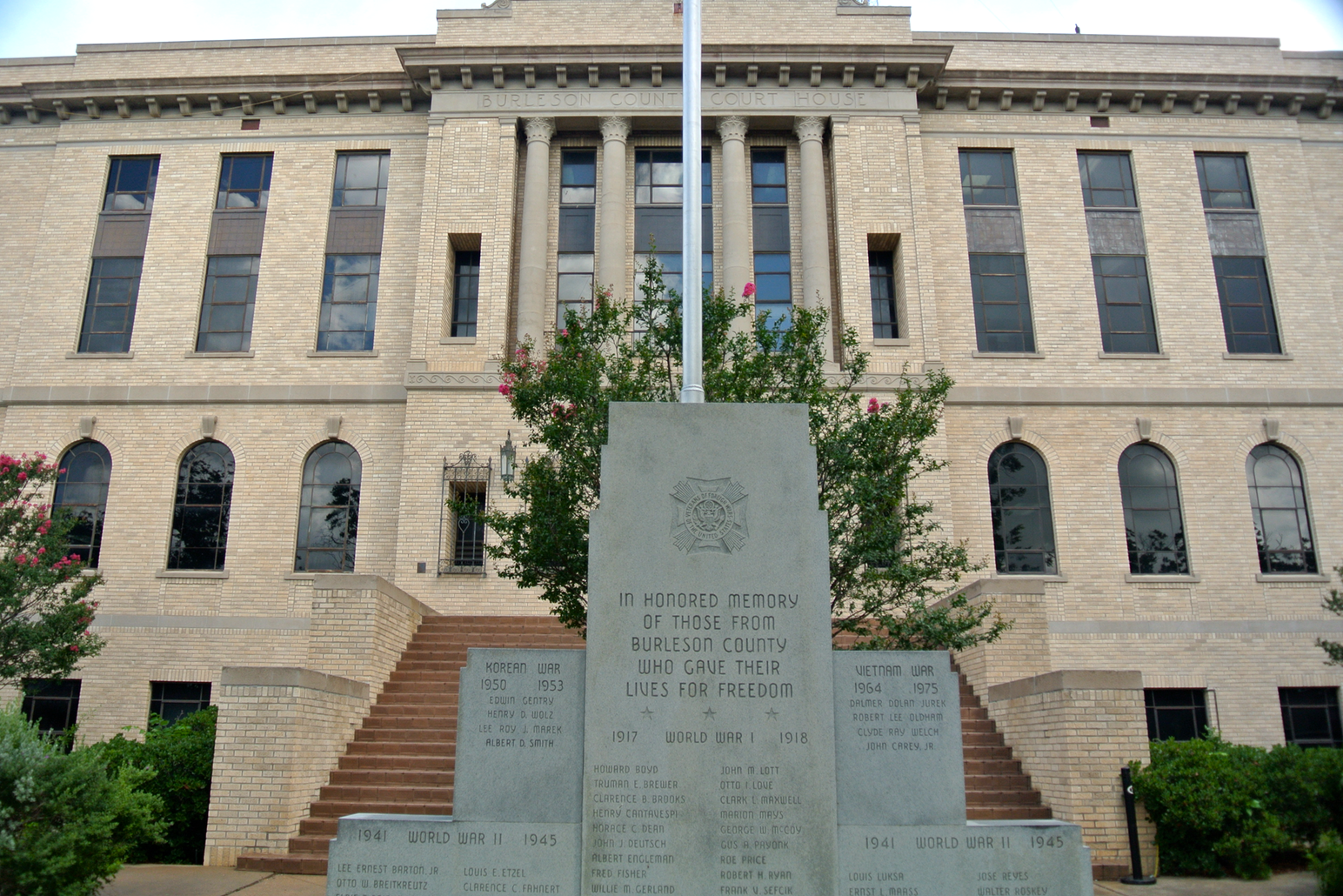 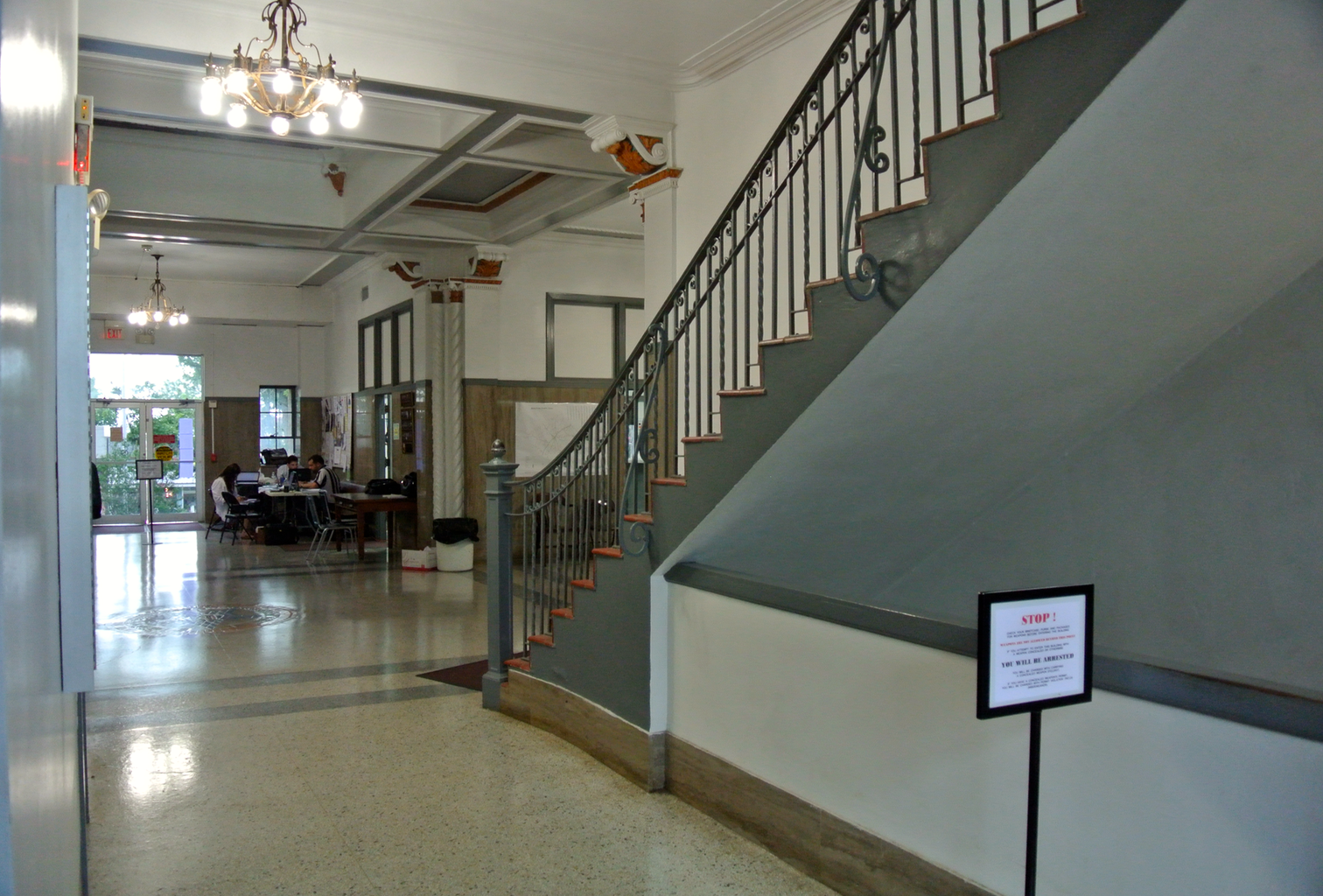 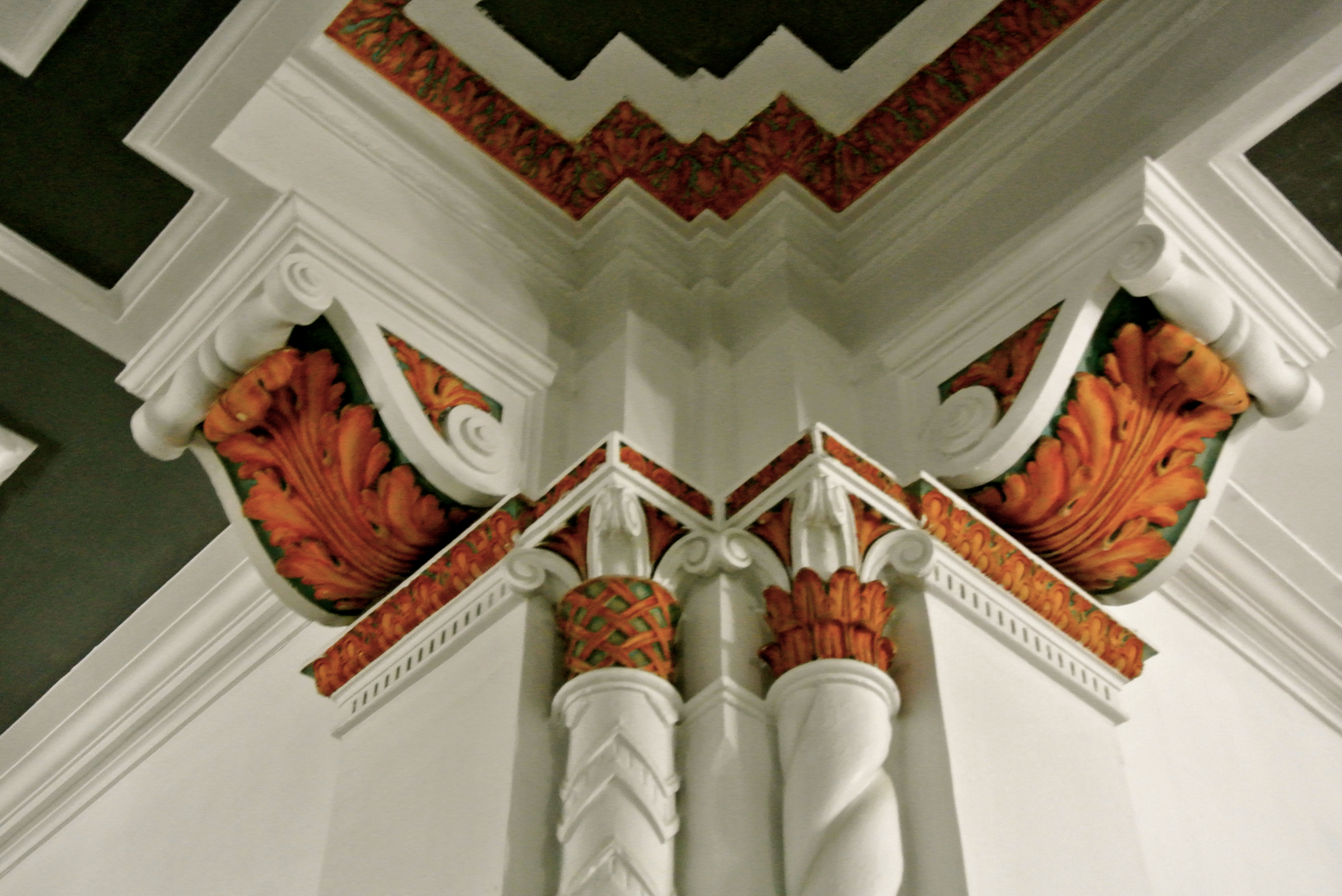 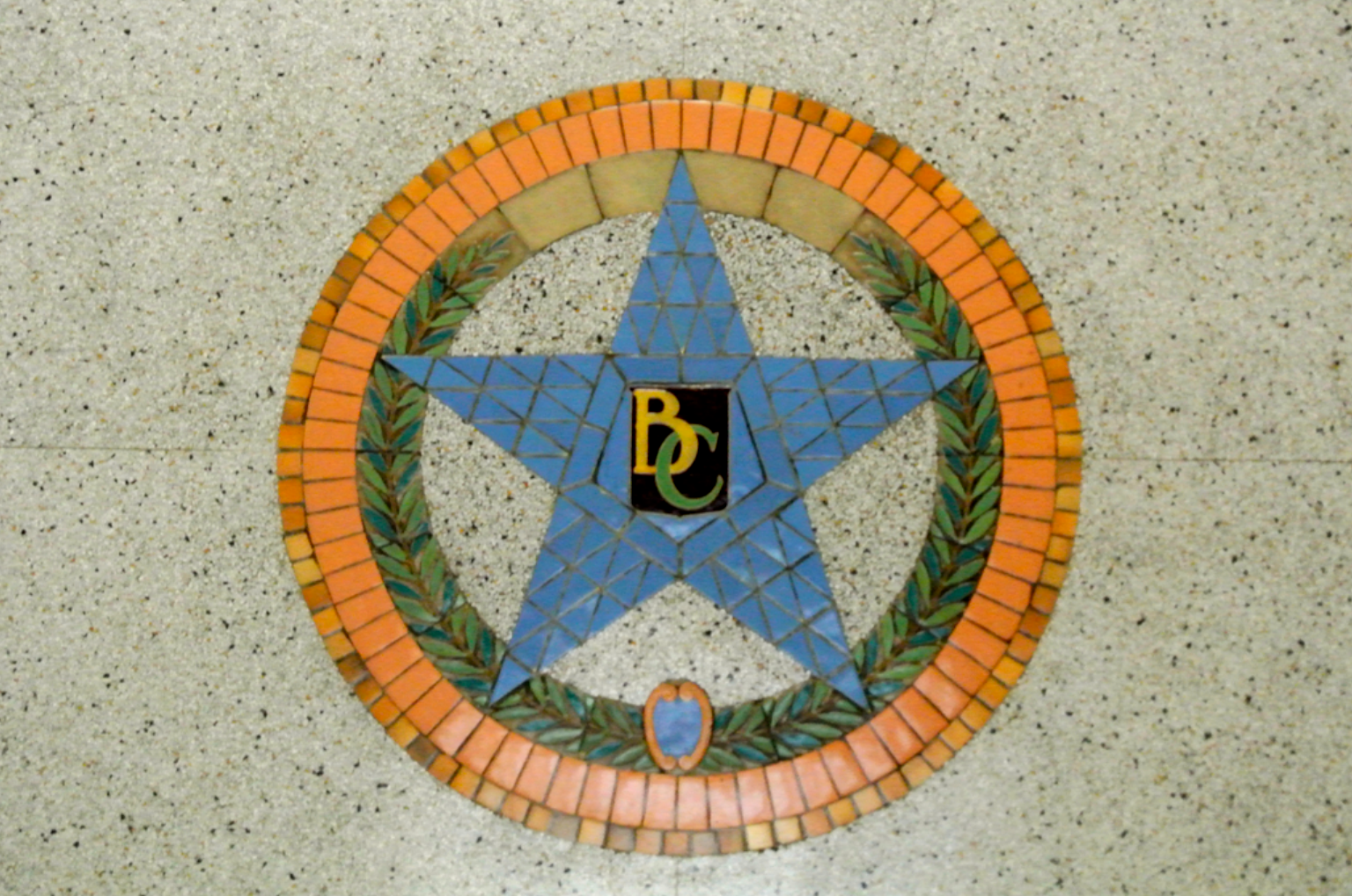 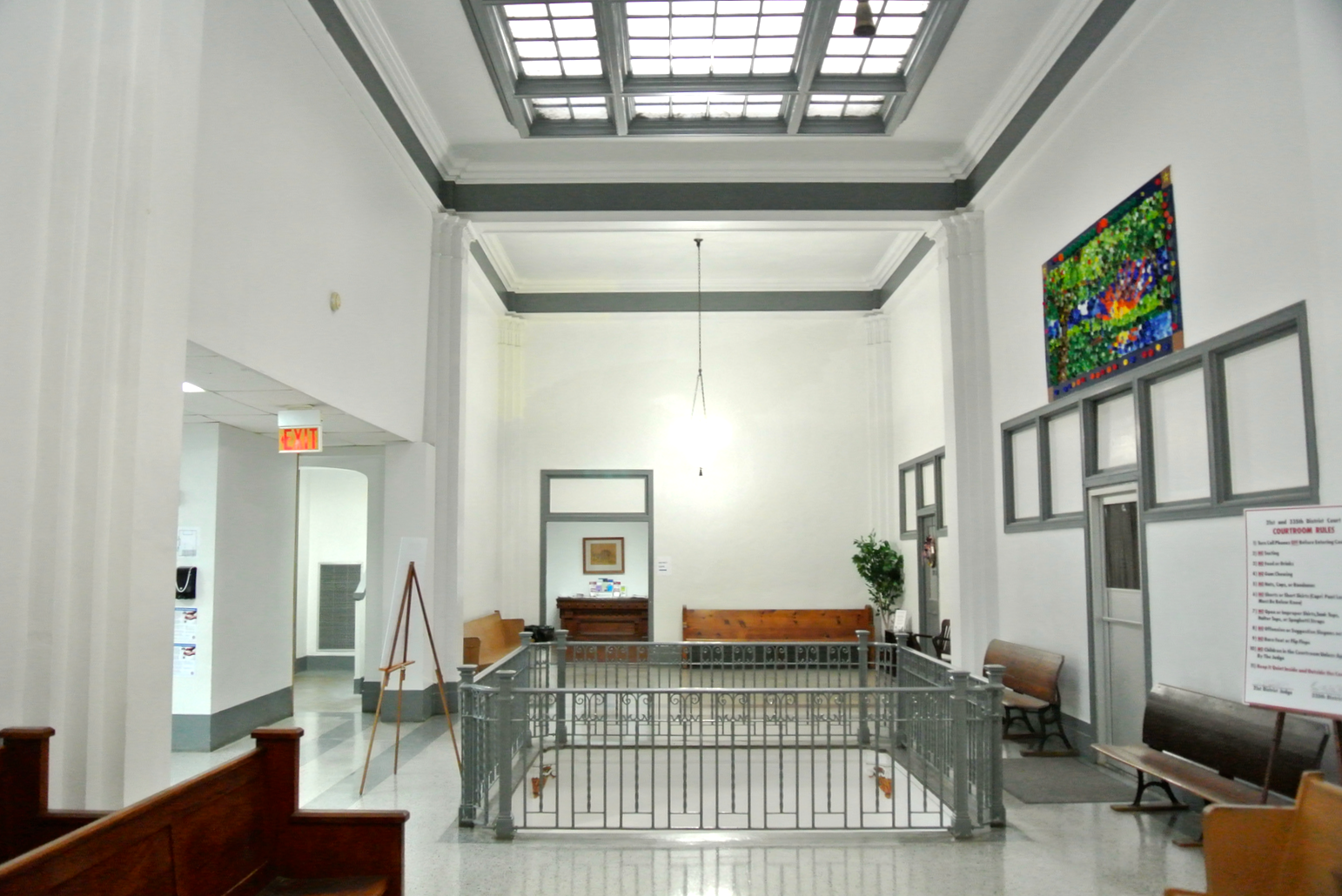 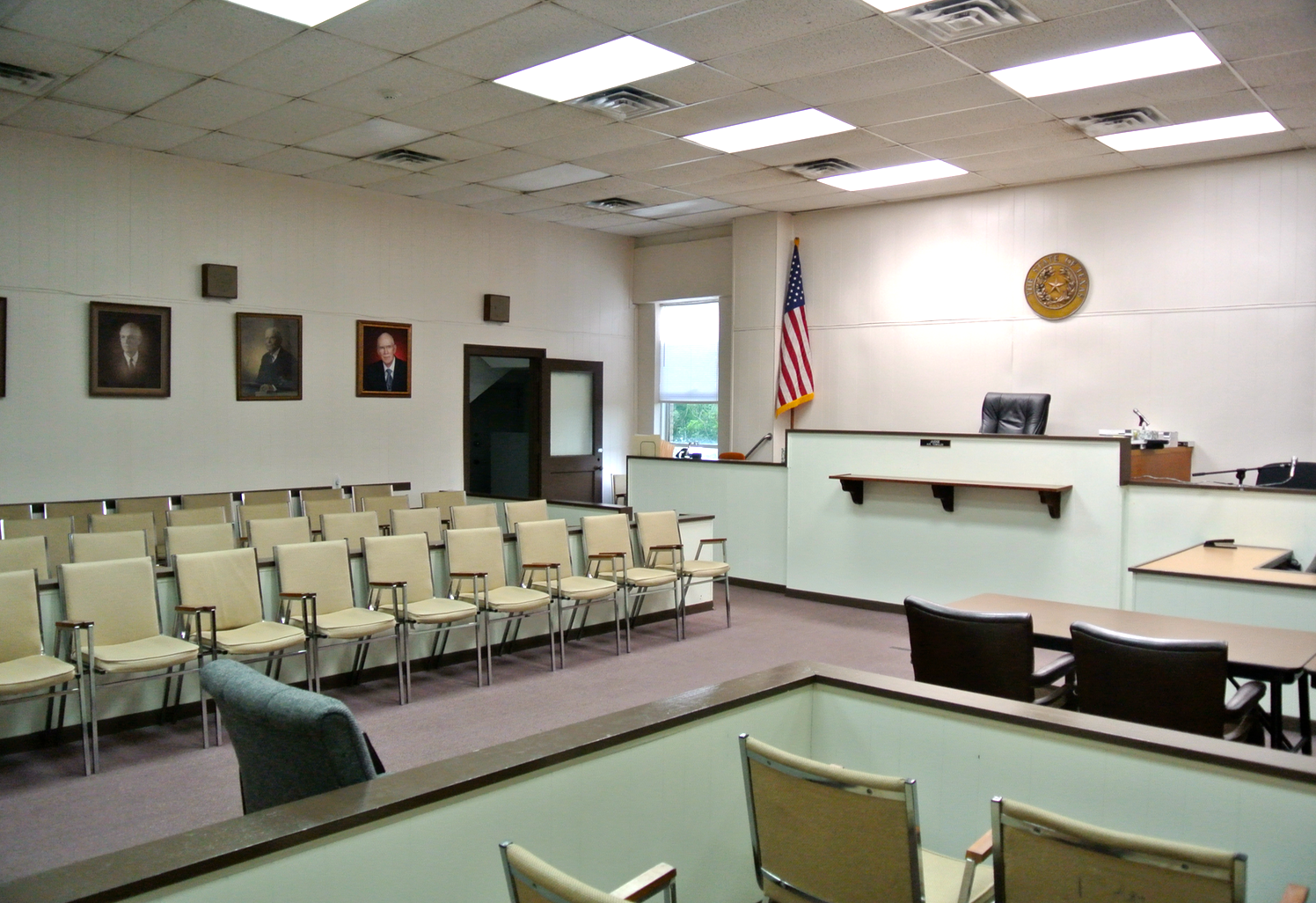 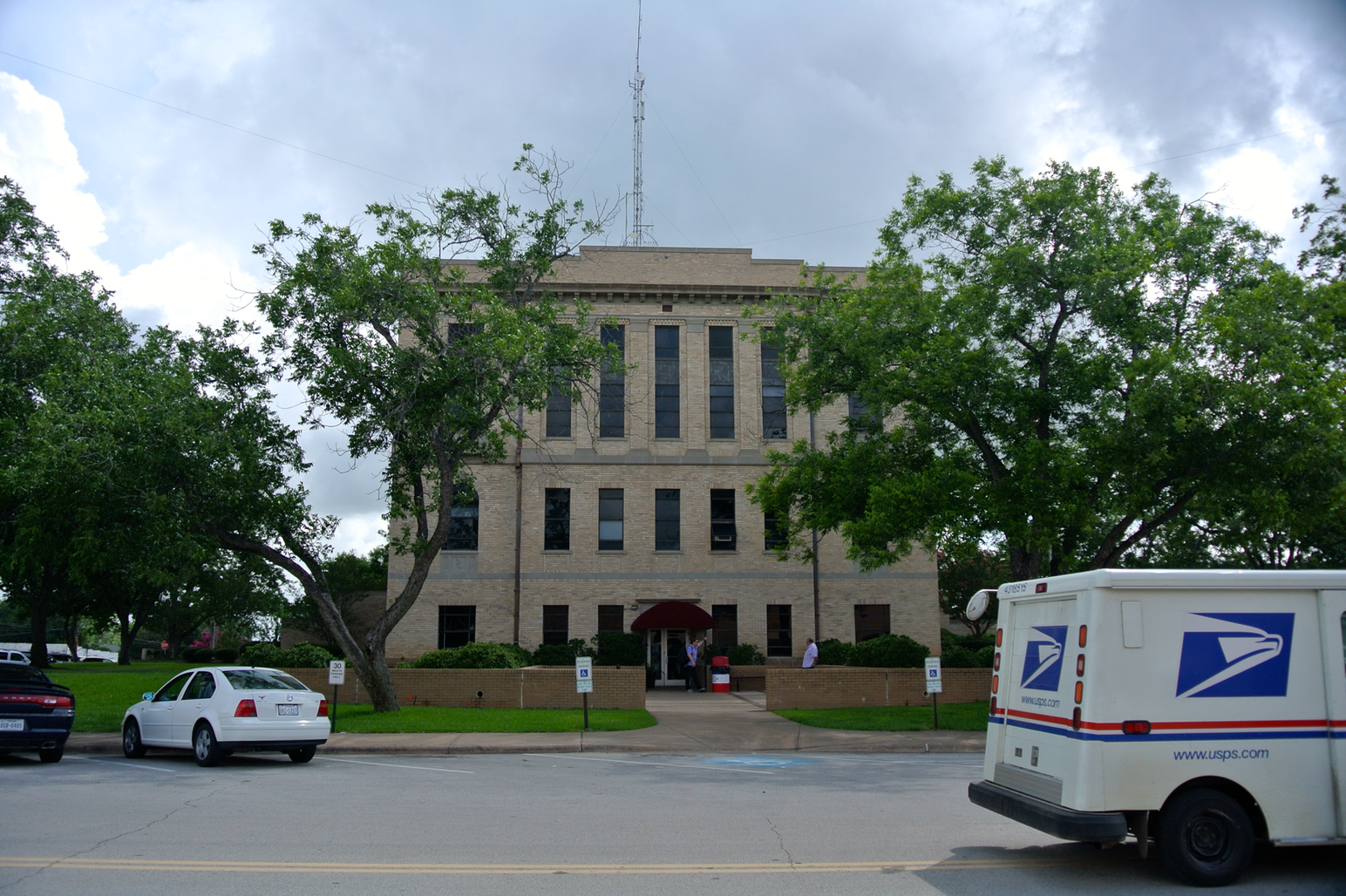 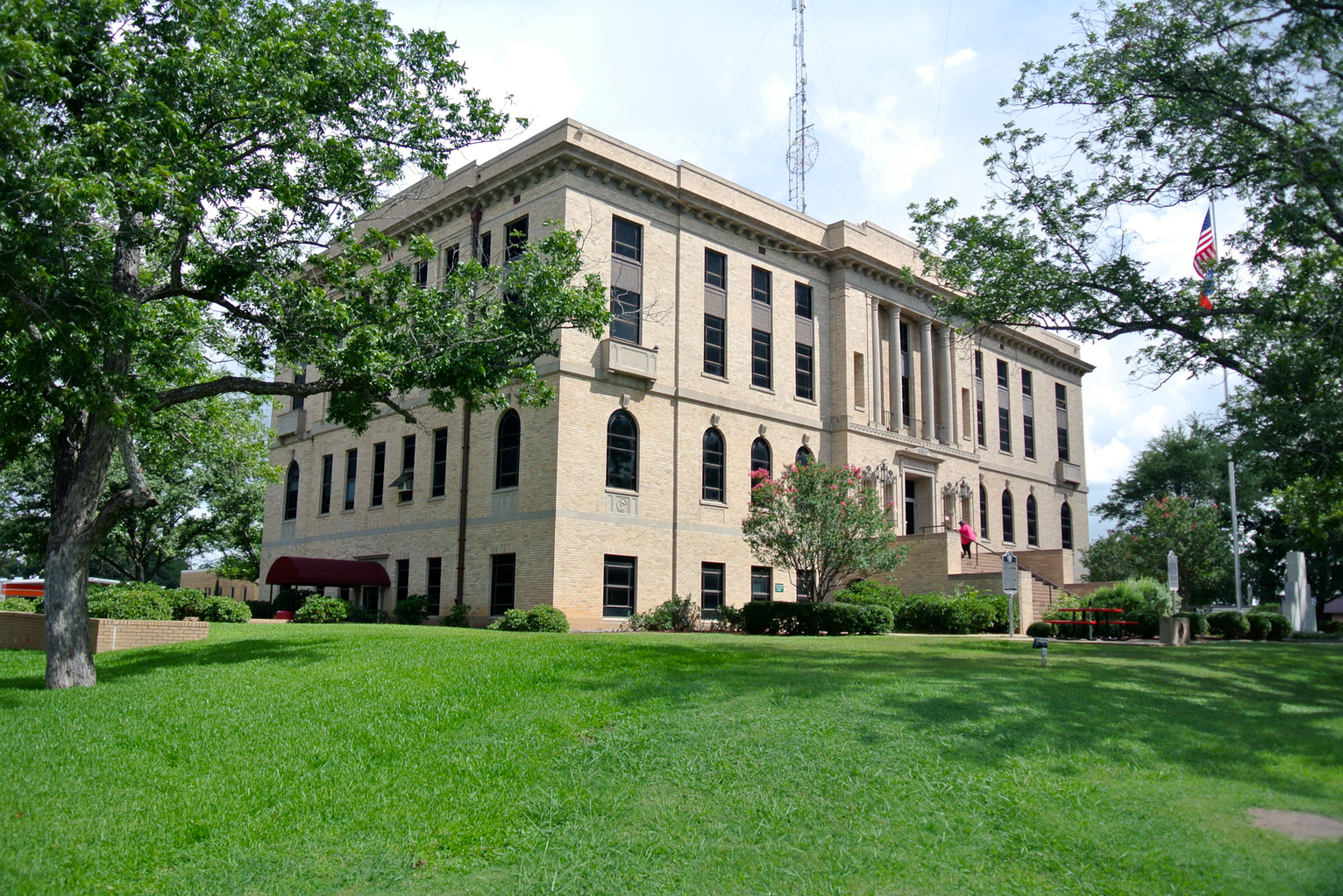