“The county was named for William Philip King, who died at the Alamo. King County embraces 944 square miles of hilly, broken country with extensive grasslands and dark loam to red soils. Elevations range from 1,500 to 2,000 feet above sea level; Haystack Mountain and Buzzard Peak are the highest points in the county, which is drained by tributaries of the Wichita and Brazos rivers.”

“Comanches of the Wanderers band controlled the area until the late nineteenth century. The material culture of the Wanderers reflected the tribe’s nomadic habits. Their tepees were easily moved and set up as they roamed the area hunting buffalo and other game, as well as the several plants the group used for food. Like other Comanche bands, the Wanderers were fierce warriors, skilled horsemen, and relentless raiders. In the 1870s the United States Army pushed the Indians out of the area and opened the region to white settlement.”

“On August 21, 1876, the Texas legislature formed King County from lands previously assigned to Bexar County. By 1880 the United States Census counted forty residents in the county. Some of the earliest settlers were Isom Lynn, A. C. Tackett, Brants Baker, and Bud Arnett. In 1890 there were twenty ranches and farms encompassing 4,413 acres in the county, and the population had grown to 173. In 1891, the county was organized, with the small town of Guthrie designated as the county seat.”

“Much of King County history centers on the great ranches that were established in the area during the 1880s and 1890s-the Four Sixes, the Pitchfork, the Matador, and the SMS ranches, for instance. Early ranchers preserved water by damming canyons and draws to hold the heavy spring rains. Building these tanks entailed engineering projects of considerable scope, involving dams as long as 150 feet put together by the exertions of a small work force. In the 1890s wells were drilled, at considerable expense, and windmills were employed to lift water to the surface from sources as deep as 300 feet underground.”

“Though ranching continued to dominate the economy, more acres were put to the plow during the first thirty years of the twentieth century. By 1910, 107 farms were in operation in King County, and almost 3,000 acres was planted in cotton and 2,500 in corn and sorghum. Local farmers were also beginning to grow fruit; by 1910 there were about 4,000 fruit trees (mostly peach) in county orchards. The census counted 810 residents in 1910. Agriculture in the county suffered between 1910 and 1920. The number of farms and ranches dropped to only thirty-eight by 1920, and the population declined to 655. Only about 9,700 cattle were reported in the county that year.”

“The area’s economy grew significantly during the 1920s, however; the cattle industry revived, and cotton production expanded. In 1929 almost 23,000 cattle were reported in the county, and cotton was planted on more than 20,600 acres; the census counted 159 farms and ranches in King County that year, and the population had grown to 1,193.”

“The growth of the 1920s was reversed during the 1930s by the Great Depression and the Dust Bowl. Almost a third of the county’s farmers were forced out of business during this period; by 1940 only 110 farms or ranches remained. Cotton production plunged more than 50 percent over the course of the decade, and by 1940 only about 9,100 acres was planted in the fiber. Many residents left; in 1940 only 1,066 people were living in King County.”

“Guthrie (population, 160) is the county’s largest town and the seat of government. Other communities include Dumont and Finney.” 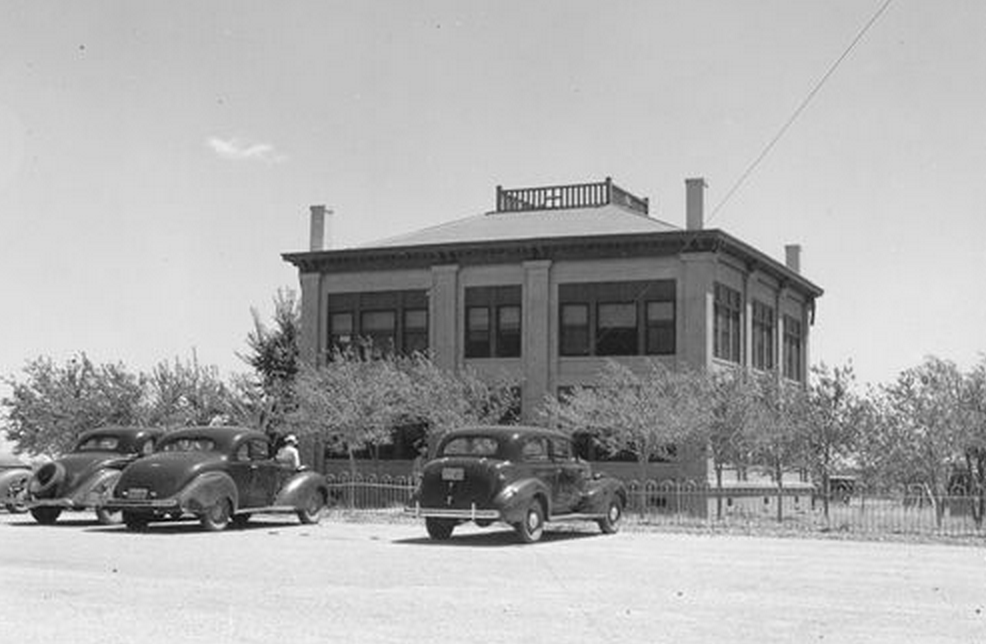 “Created in 1876, King County organized in 1891. Its first courthouse, a two-story frame structure, was destroyed in 1905 by a tornado. The next house of justice, built of sandstone, burned in 1914. That same year, the county hired Fort Worth architect Ernest E. Churchill to design a new courts building. The two-story concrete structure served as the courthouse until 1982, when the county converted it to a library and built a new courthouse. The Classical Revival edifice exhibits prairie-style influences. Today, it remains a testament to the aspirations of early 20th-century King County residents.”

When it came time to convert the old courthouse into a library and adopt a new building for county business, county commissioners elected a design by T. Renfro. His modern structure was constructed by the Tushia Company.

Entering King County from the north, via Highway 83

Both courthouses, historic and modern, stand side by side in Guthrie (just off the highway). 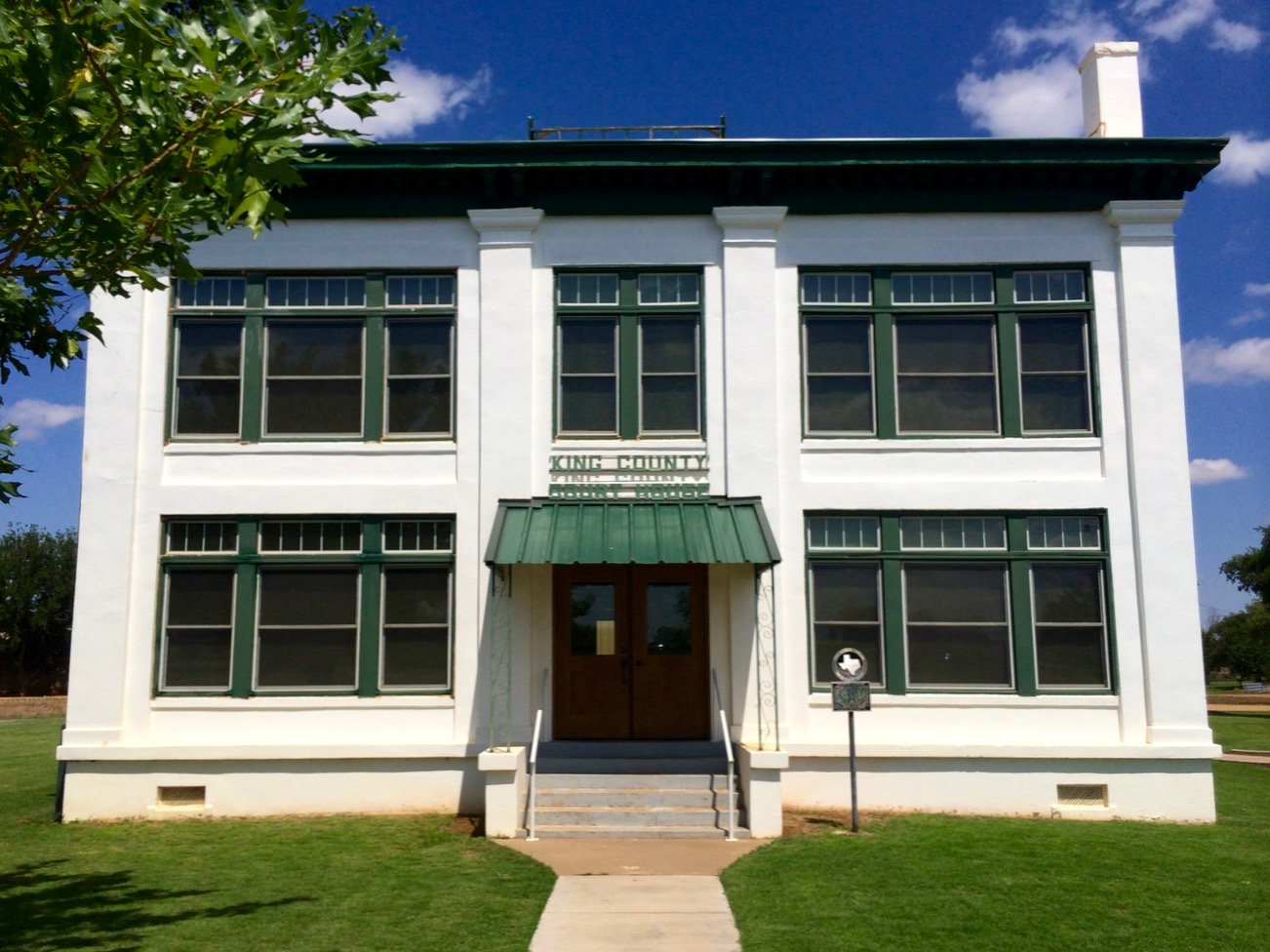 The main entrance of the 1914 courthouse faces west towards Highway 83. Note, there is no Guthrie town square in sight. 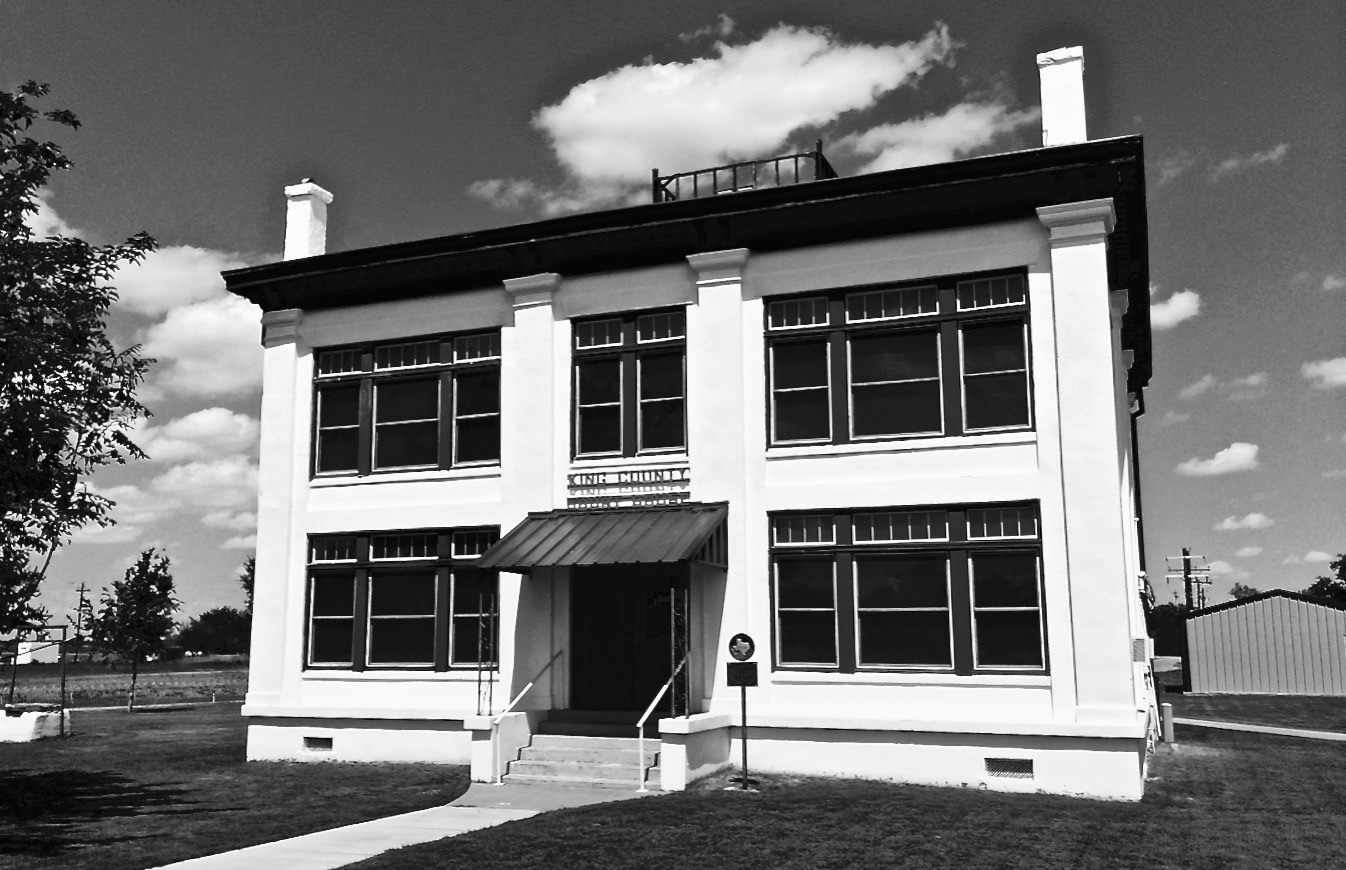 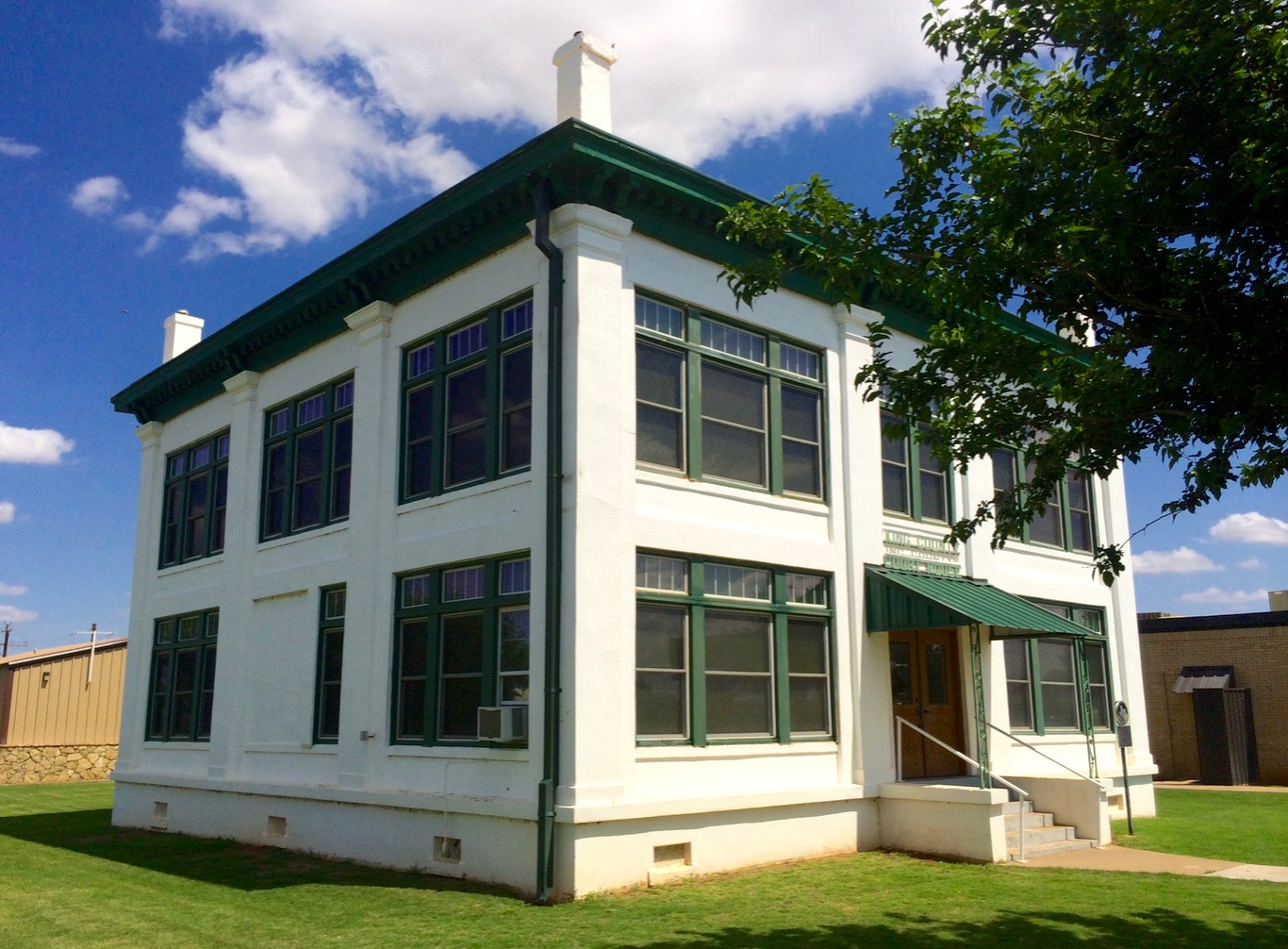 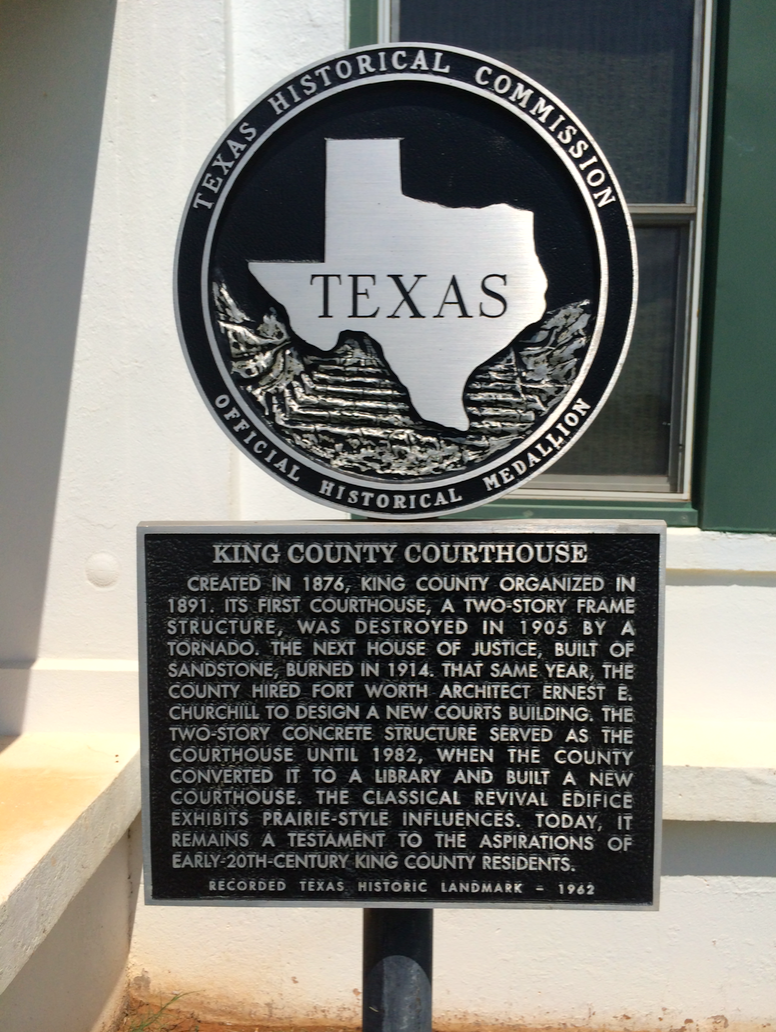 A county parking lot, and the highway beyond, as seen from the western doors 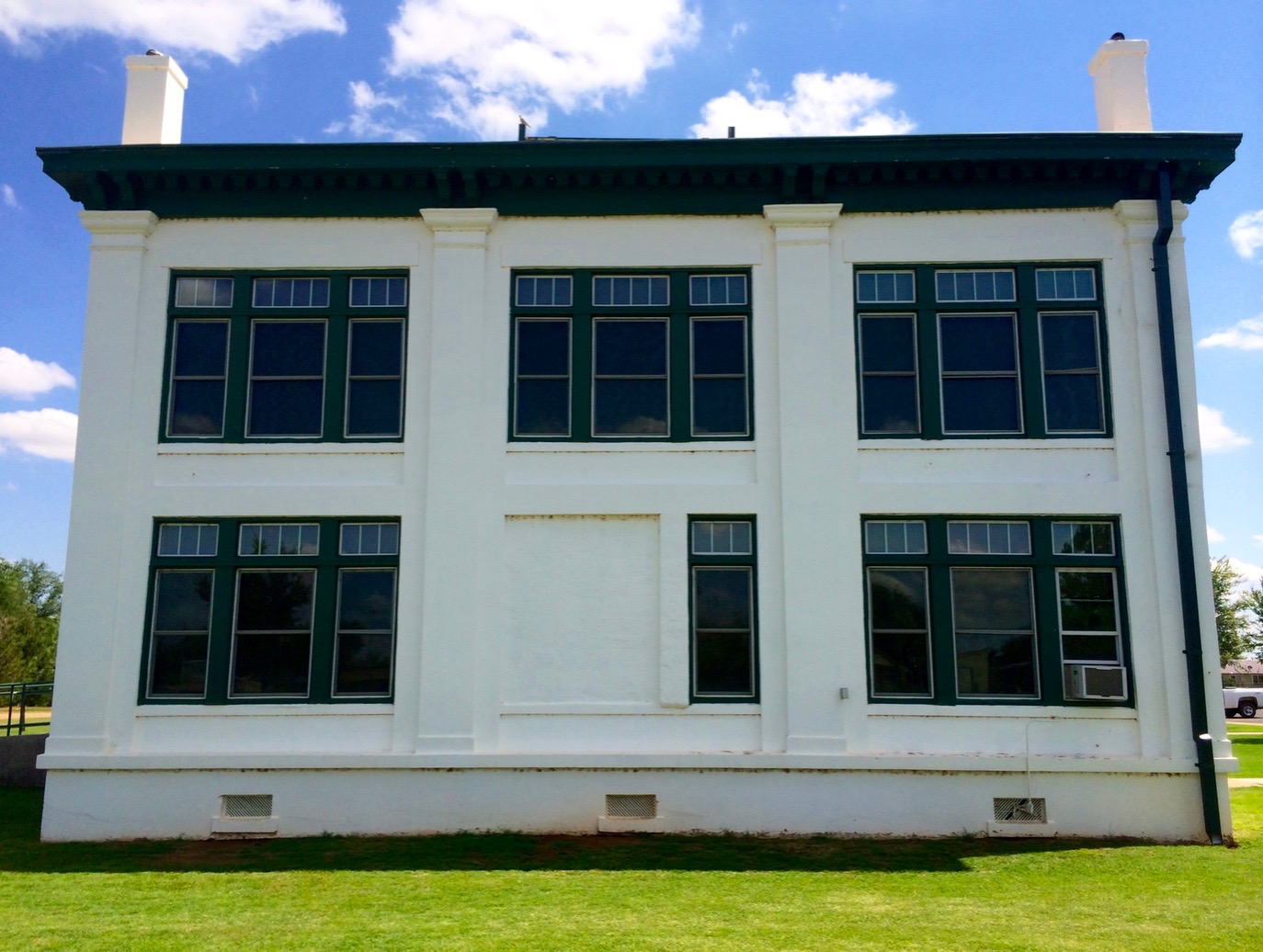 This is one of two hand-dug wells on either side of the historic courthouse. Surely, these were used during the same time period as the original courthouse. 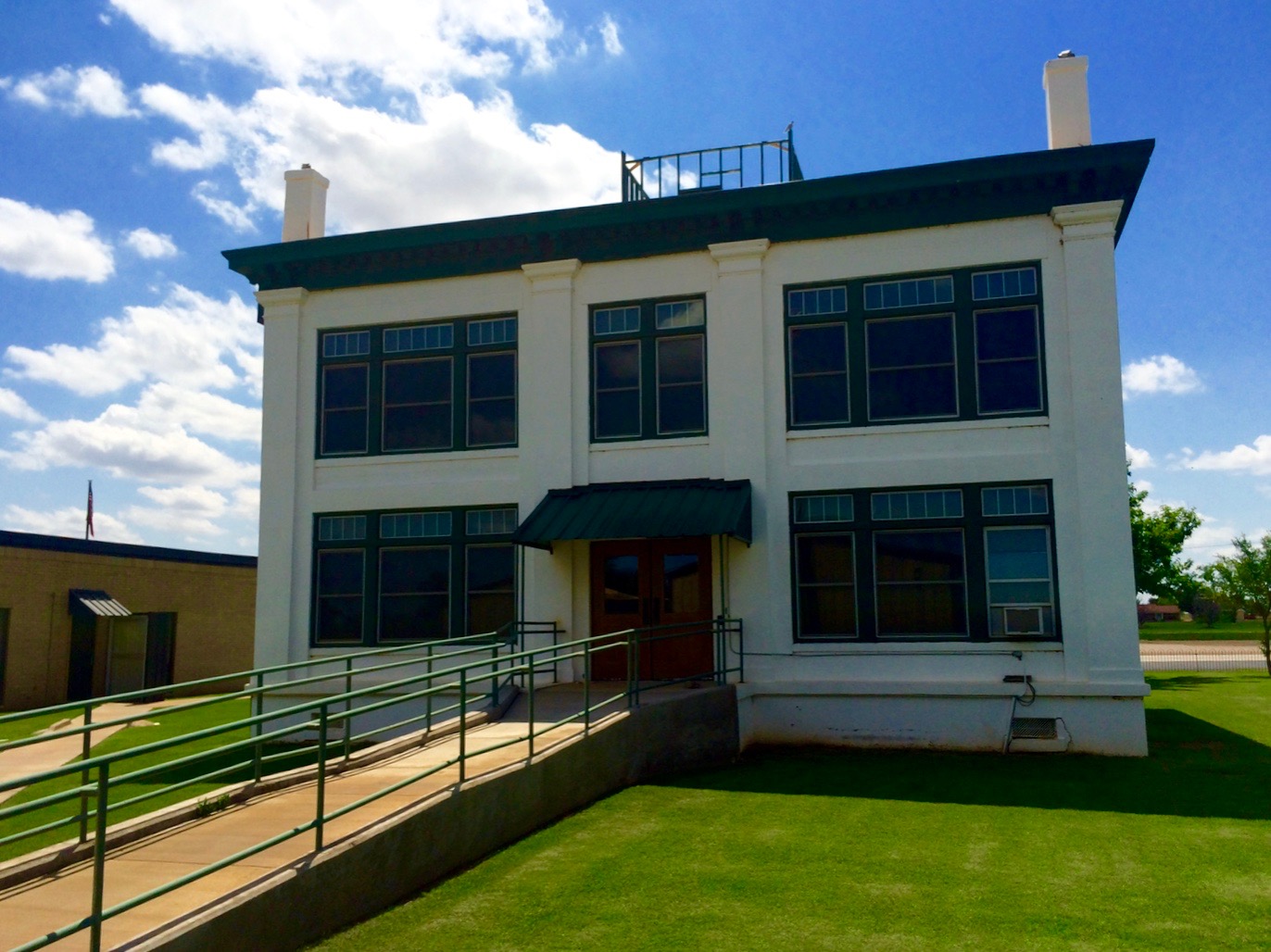 The eastern façade, facing a dirt tract behind the courthouse

The main entrance of the 1982 courthouse faces west towards the highway as well. 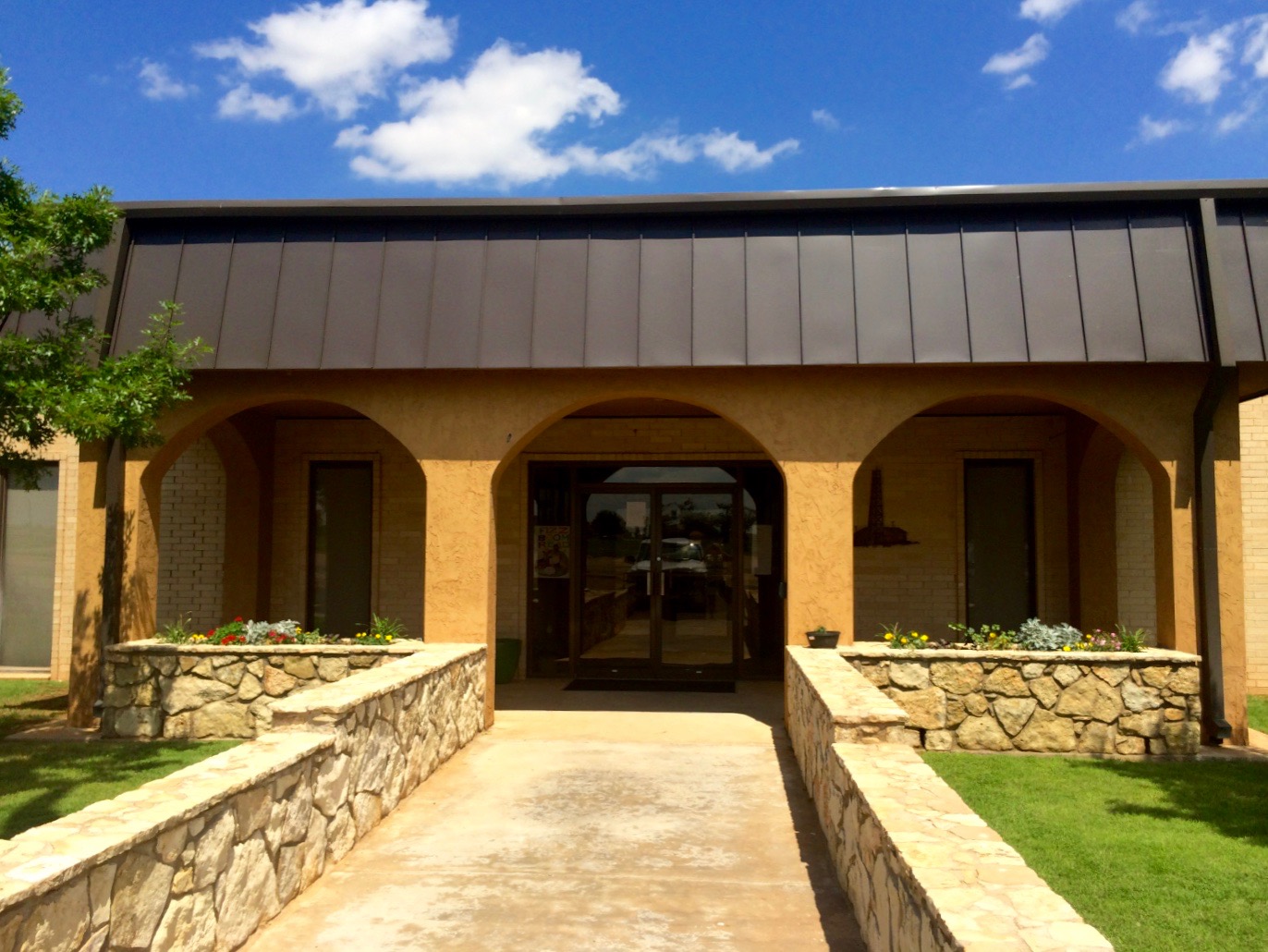 The entryway is, in my opinion, the only architecturally noteworthy portion of the building. 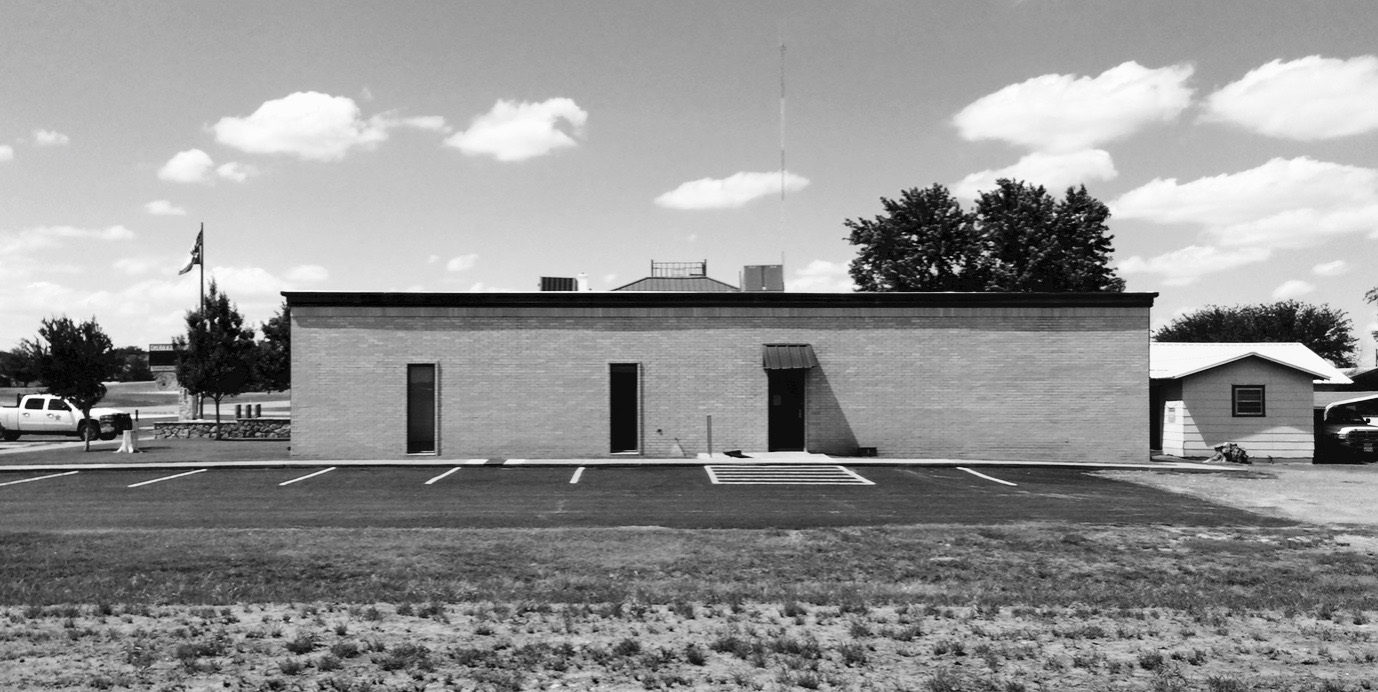 This is the southern façade, facing Arnett Street. 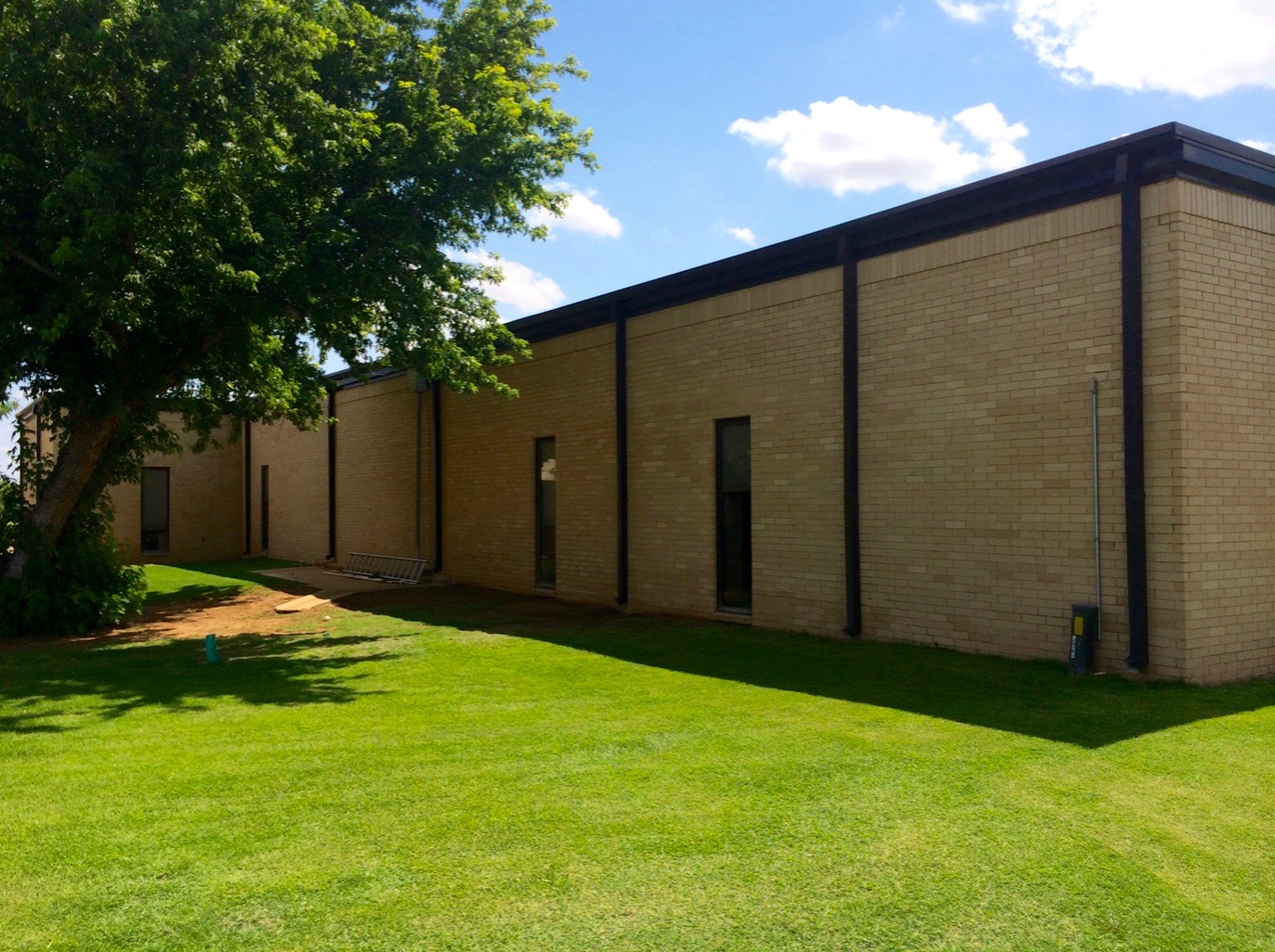 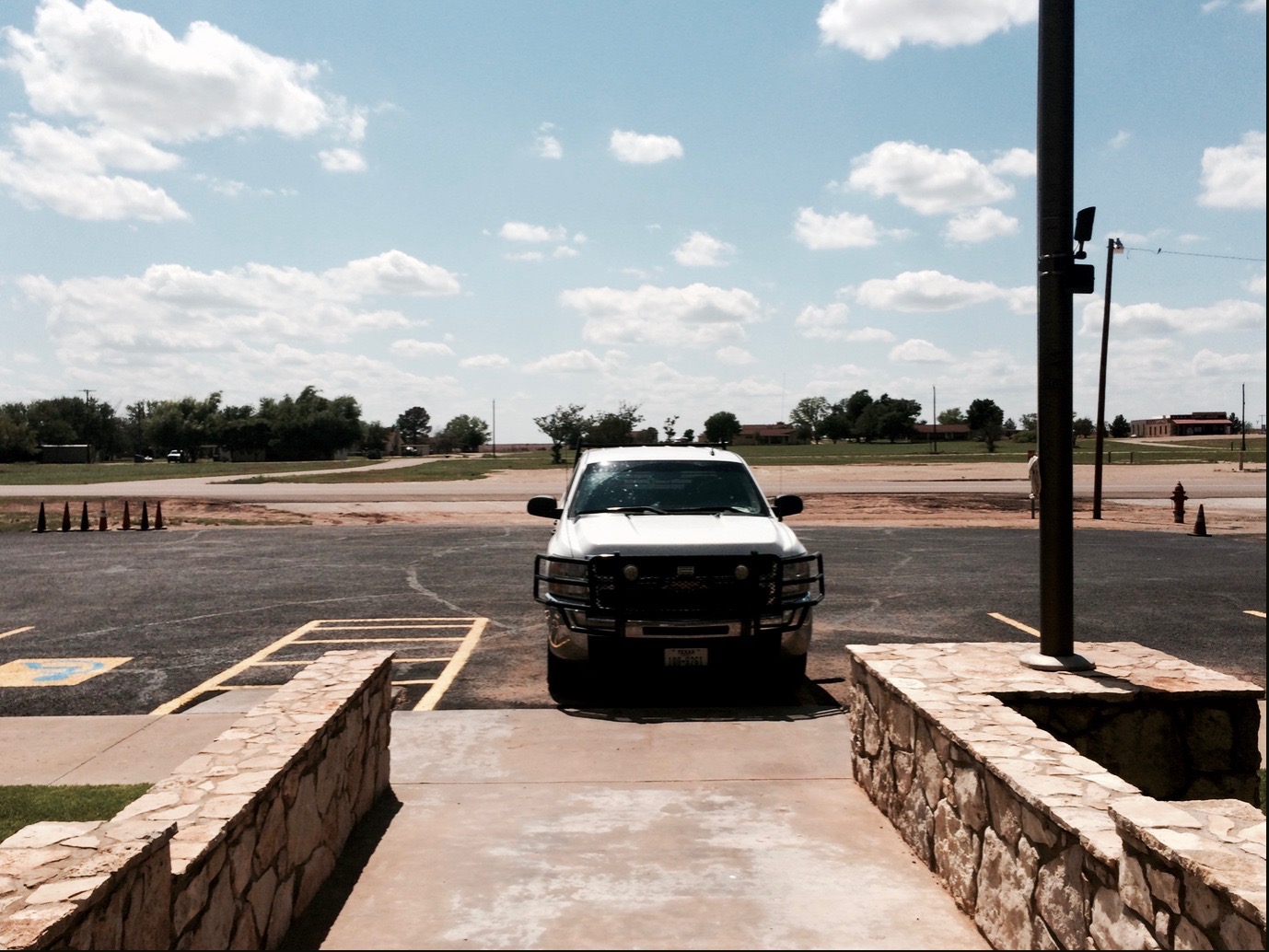 A King County Sheriff was the only person in sight when I visited Guthrie.

The area’s biggest ranch, Four Sixes Ranch, operates a supply house across the highway from the two courthouses. 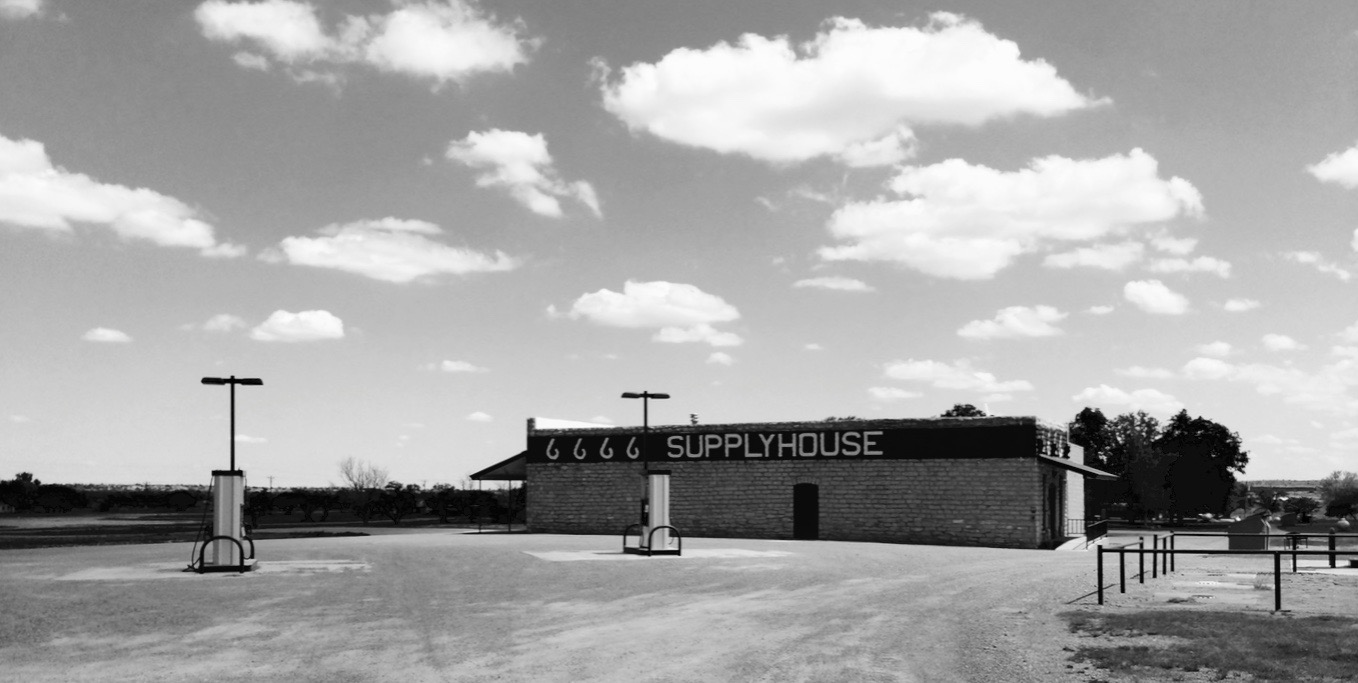