“The county was named for George Cottle, who died at the Alamo. Cottle County has an area of 900 square miles; its center point is at 34°05′ north latitude and 100°15′ west longitude, midway between Lubbock and Wichita Falls. The terrain is rough in the west and level in the east.”

“The Texas legislature established Cottle County in 1876 and attached it for administrative purposes to Fannin County until 1887, when it became attached to Childress County. In the fifteen years between the county’s inception and its formal organization, it remained largely a grazing area. Some cattle were apparently brought in from New Mexico, and ranches such as the OX, SMS, and Matador established their headquarters in the area. The census of 1880 showed only twenty-four persons living in Cottle County. Between that year and 1890 the pace of growth quickened with the arrival of such settlers as J. J. McAdams, who had his headquarters at the site of present Paducah, and J. H. Cansler, who had a dugout on Buck Creek. In 1886 a post office was established at Otta Springs, near the present site of Paducah. The census counted fifty farms and ranches in Cottle County in 1890, when the population was 240 and growing.” 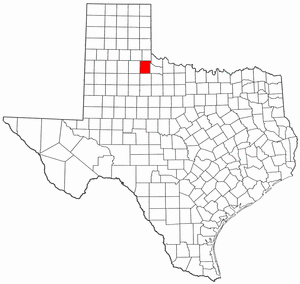 “A killing on the county line in 1889 induced residents to petition for county organization so that the suspect’s trial could be held in the county. Cottle County was organized in 1892, with Paducah as county seat; four public school districts were established that year. Cottle County voters supported the Democratic candidate for president in 1892 and continued to support Democrats in national races through 1992, with the single exception of 1928. In 1893 the county’s first newspaper, the Paducah Post, began to print, and the state legislature authorized a $12,000 bond to build a county jail.”

“Droughts held back early settlers; pioneer H. P. Cook remembered that “it didn’t rain enough in 1892, ’93, and ’94 to wet my shirt.” Public-works projects such as the building of a new courthouse and the construction of roads to Crowell, Childress, and Kirkland helped sustain the community. By 1900, 122 farms and ranches were operating in the county and the population had increased to 1,002. The area continued to be dominated by the cattle industry; only 7,758 acres of the county’s farmland was classified by the census as “improved” in 1900, while more than 43,000 cattle were counted in Cottle County that year.”

“This economic development of the county during the early twentieth century was aided and encouraged by a growing transportation network. Auto roads between Paducah, Childress, and Matador were completed by 1910, making the movement of people and products easier. Prospects for the county were enhanced in 1909, when the Quanah, Acme and Pacific Railroad reached the county. The county’s first hard-surfaced road was built in 1913 from Paducah to Dunlap.”

“Unfortunates sometimes sought shelter in the county jail, and everyone deplored the dust storms. Lyrical tributes to “The Beautiful Dust” appeared in the Paducah Post: “The dust, the dust, the beautiful dust; on the evil and on the just, From the North and from the South; in the eyes, the nose, the mouth…Bear it calmly since you must…Wear it bravely as a crown. Ope’ your mouth and gulp it down.”" 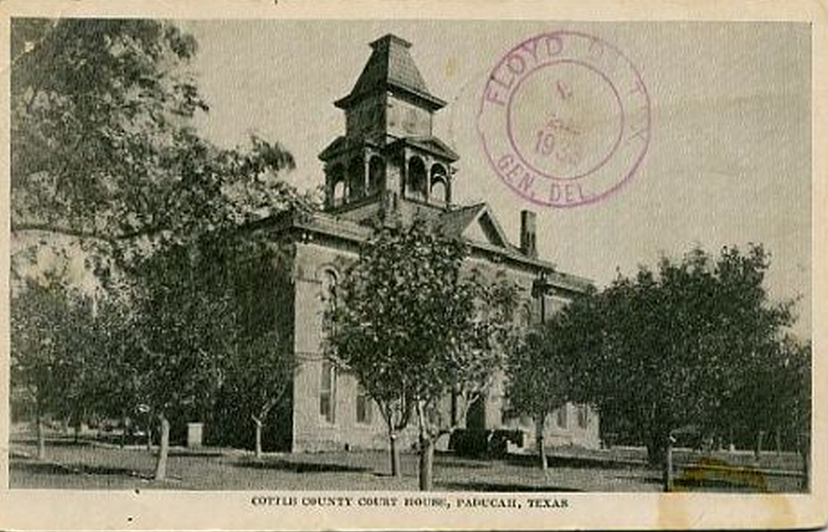 A single courthouse preceded this one. It was completed in May of 1892, and existed for only two years as a small, one-story, wooden frame building. In November of 1894, this two-story brick courthouse replaced it. It was the design of J.A. White, cost the county $18,000, and was demolished during the construction of its 1930 successor. 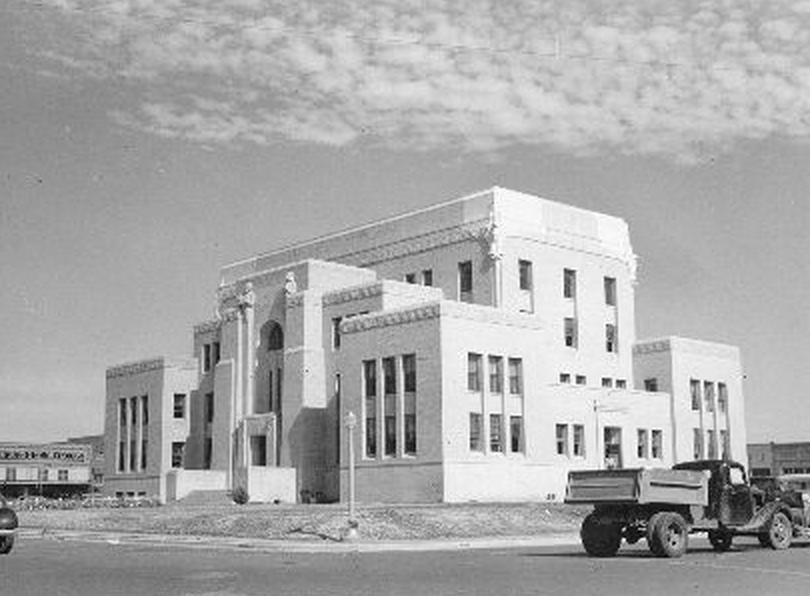 This soaring edifice was the very first Texas courthouse designed by the later renowned, Moderne architectural firm Voelcker & Dixon (of Wichita Falls). While it’s certainly of the same style as the rest of their work, it does have some striking differences. Chief among them are the building’s Egyptian inspired details. As the most unique Moderne courthouse in the state (by my opinion), it’s also the only court building in Texas to be designed in any sort of Egyptian Revival style. You’ll particularly notice the northern and southern façades’ massive doorways, shaped like ancient pylons.

Originally, the Cottle County Commissioners Court had approved designs from architect C.H. Leinbach, but the offer they extended him was rescinded four days later. The reasoning for this is not clear. However, an election was subsequently put out to the citizens of the county to vote on $150,000 worth of courthouse bonds. The measure passed within Paducah, but largely failed outside the seat. Still, it received enough votes to prompt the drafting of a new contract for Voelcker & Dixon. This was in 1929. That fall, work began on the current courthouse.

Today, it bears such impressive details as stone eagles, carved busts of justice and liberty figures, and stepped blocks that project out from the building’s central mass.

Below, you can see a photo of the Ptolemaic Temple of Horus in Edfu, Egypt. It encapsulates the style of the pylon, and I’ve included it so that you can draw connections between the architecture of antiquity and its revival on the Paducah square. 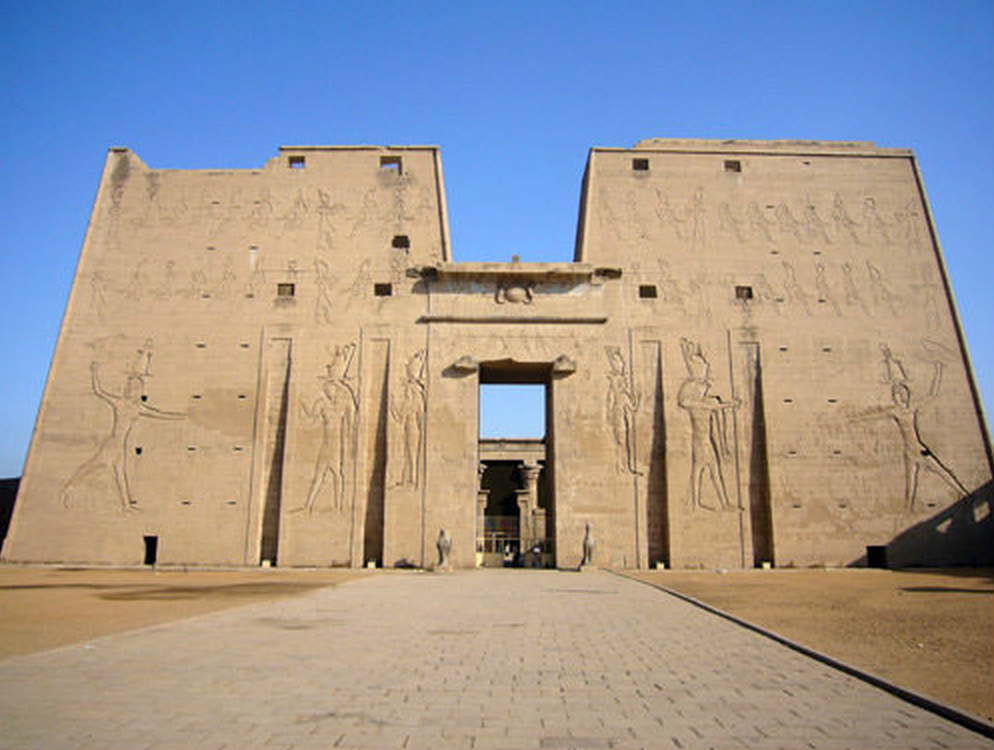 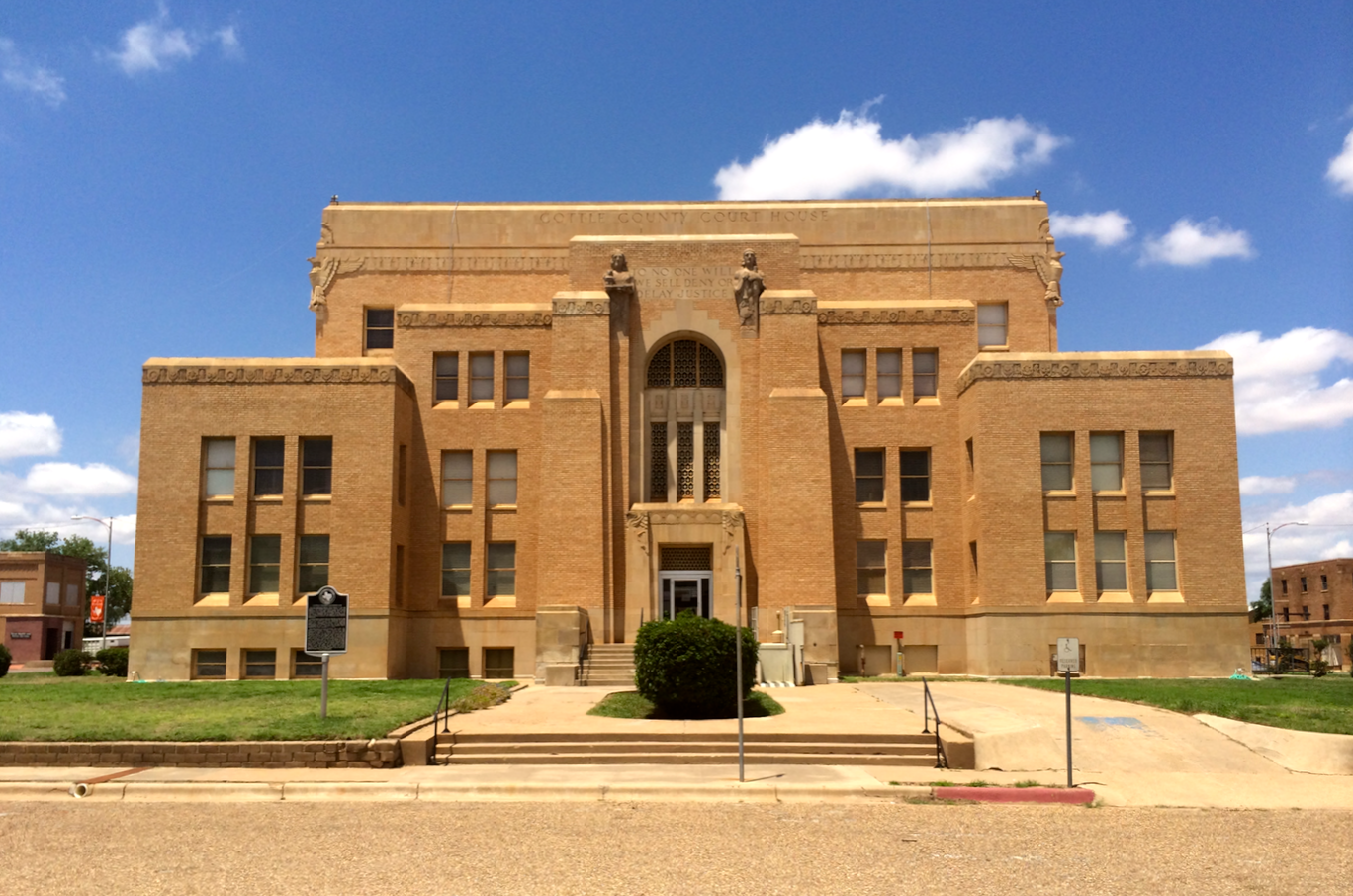 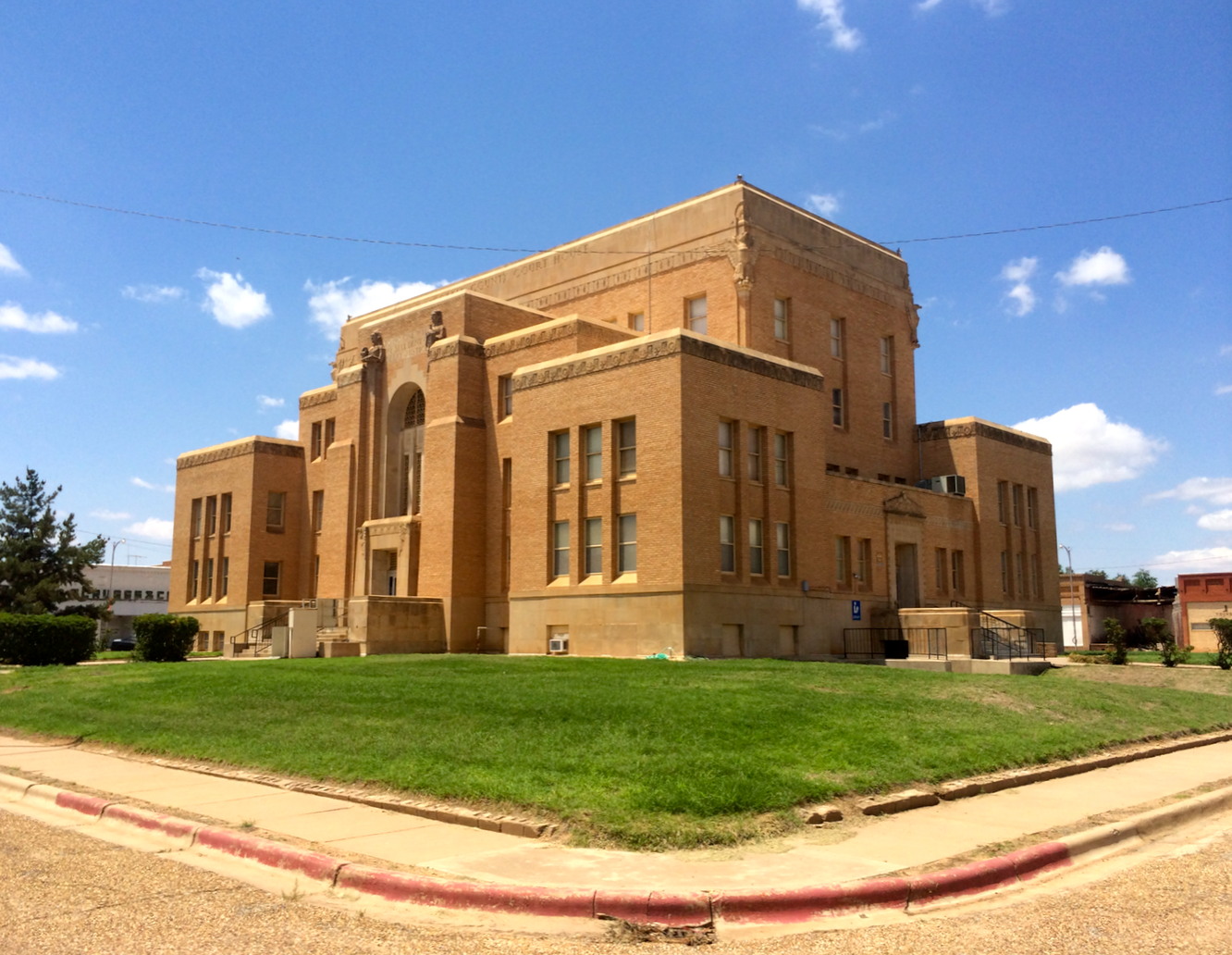 Influences from the Land of the Pharaohs become quite clear once you realize they’re there. 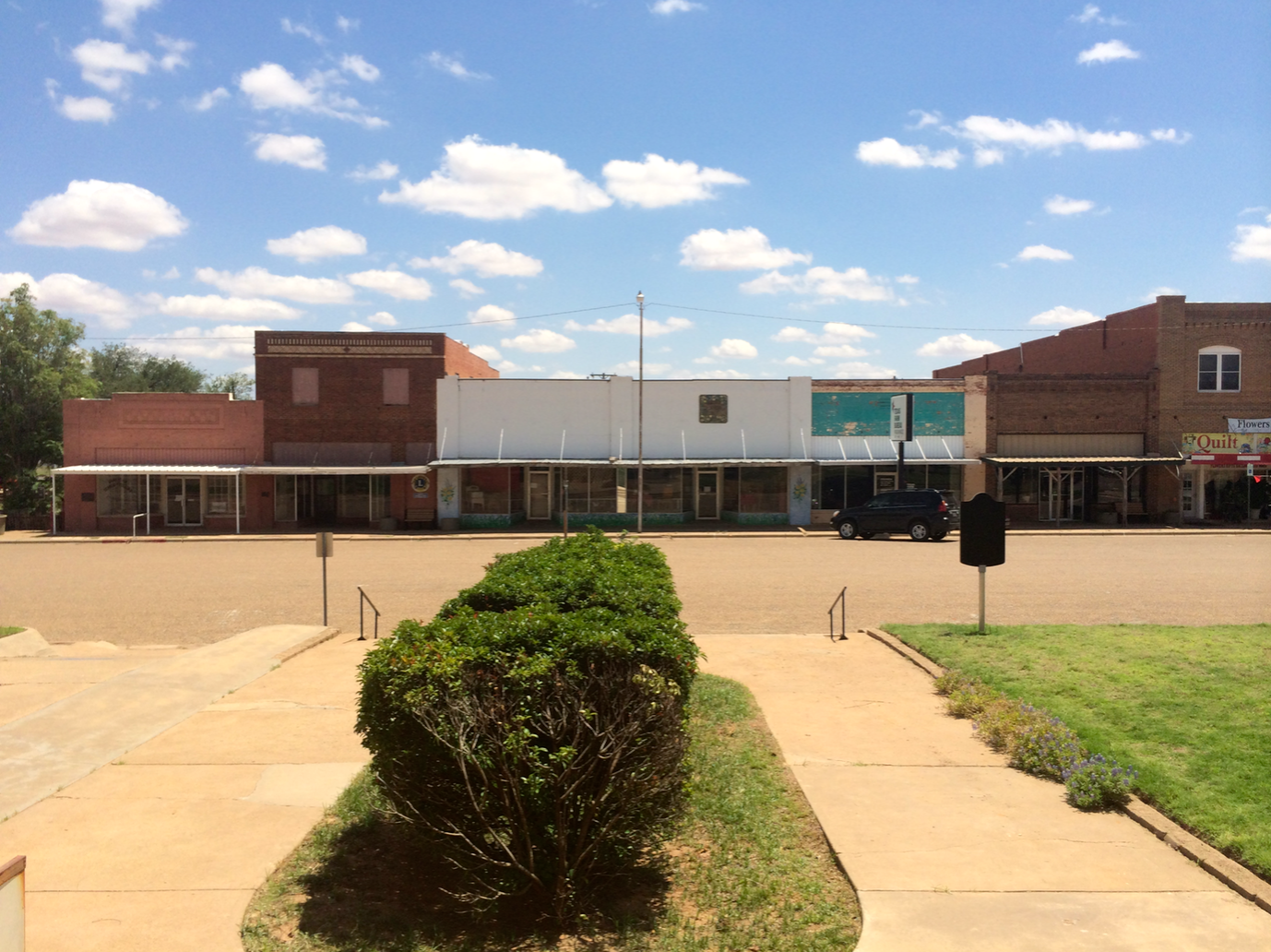 The view of Richards Street from the southern entrance

Also on that side of the building is this contraption. There’s no handicap ramp in sight, but Cottle County fulfills its assigned duties from the Americans with Disabilities Act by this unique wheelchair elevator. 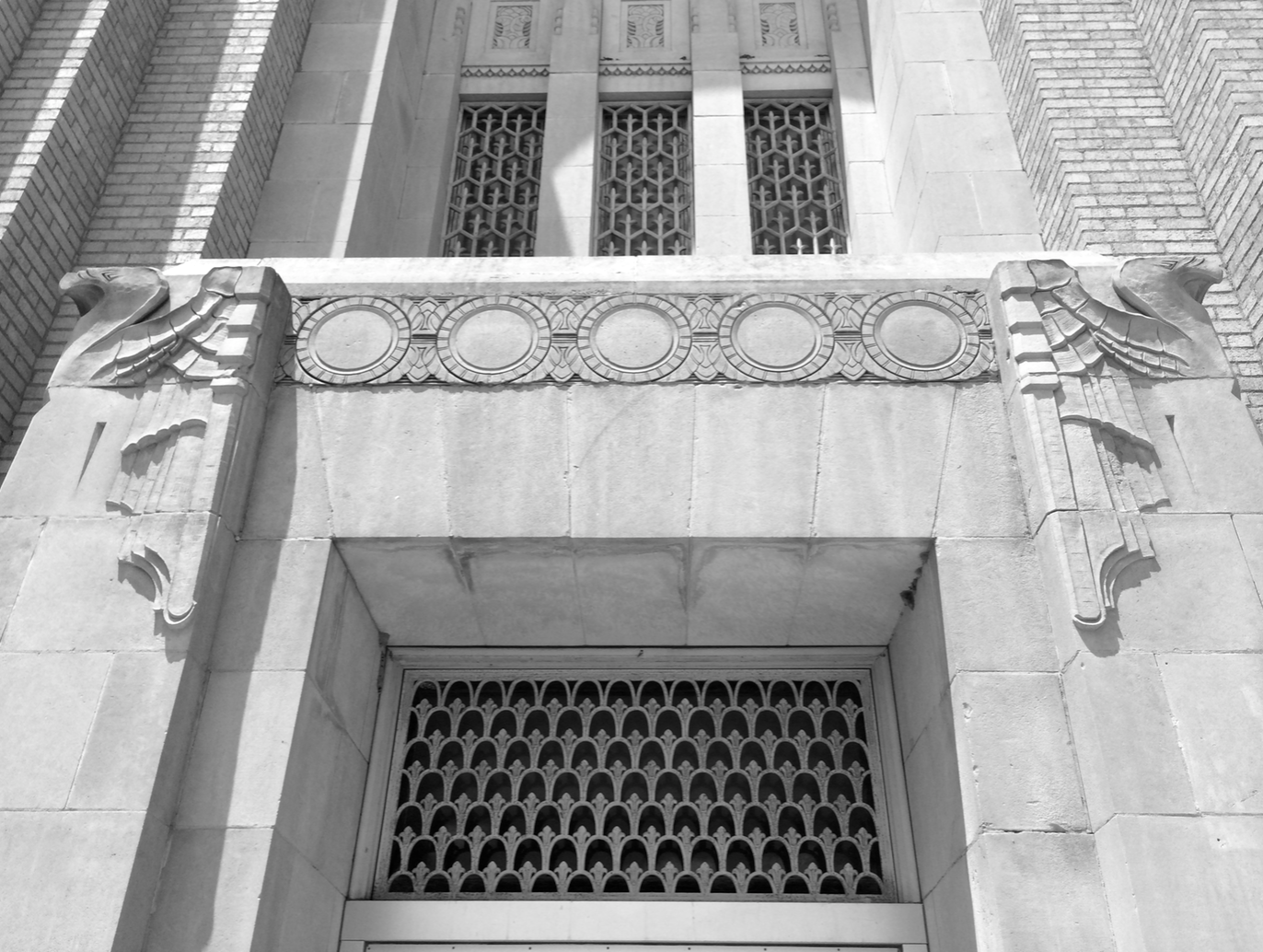 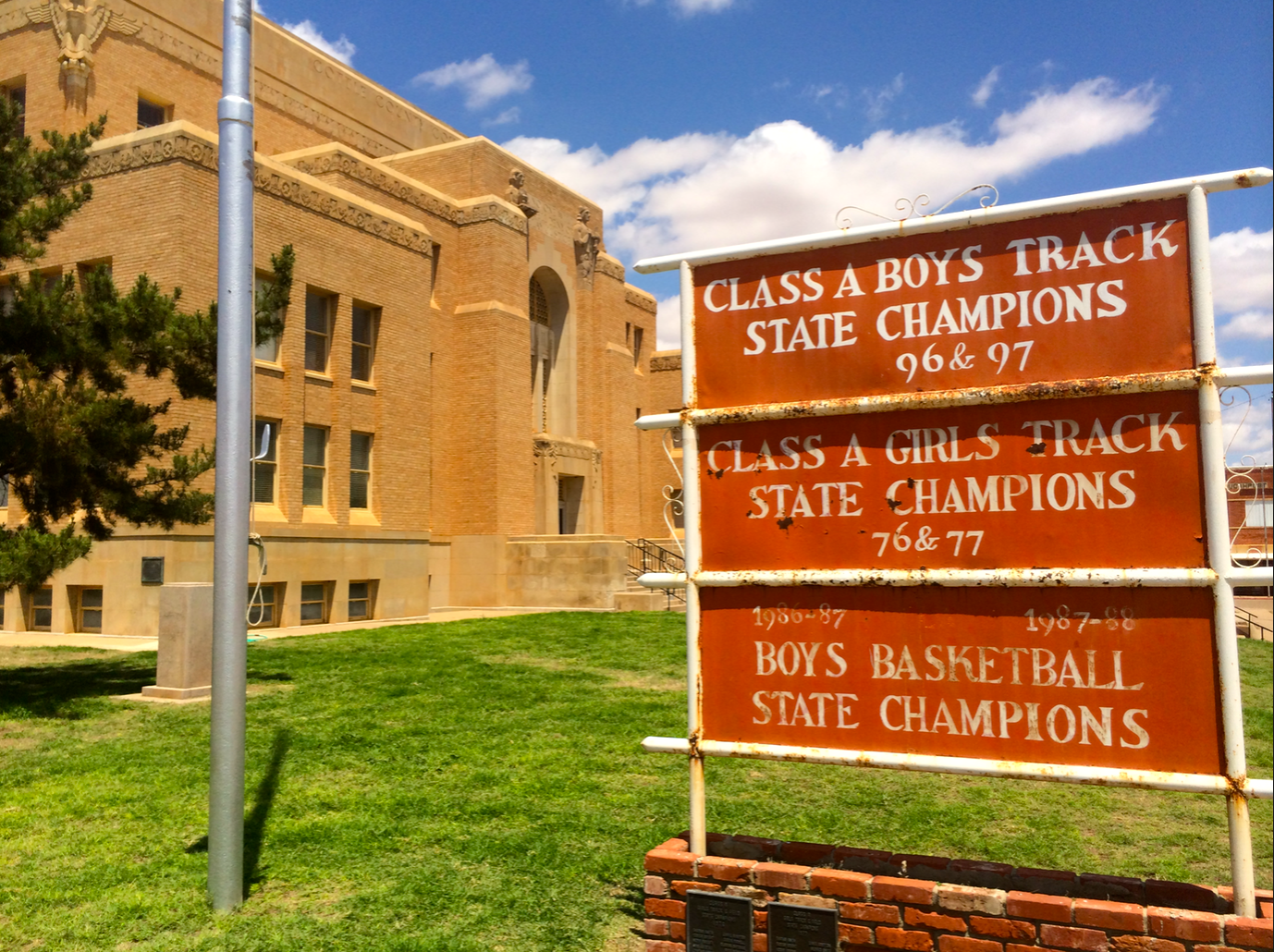 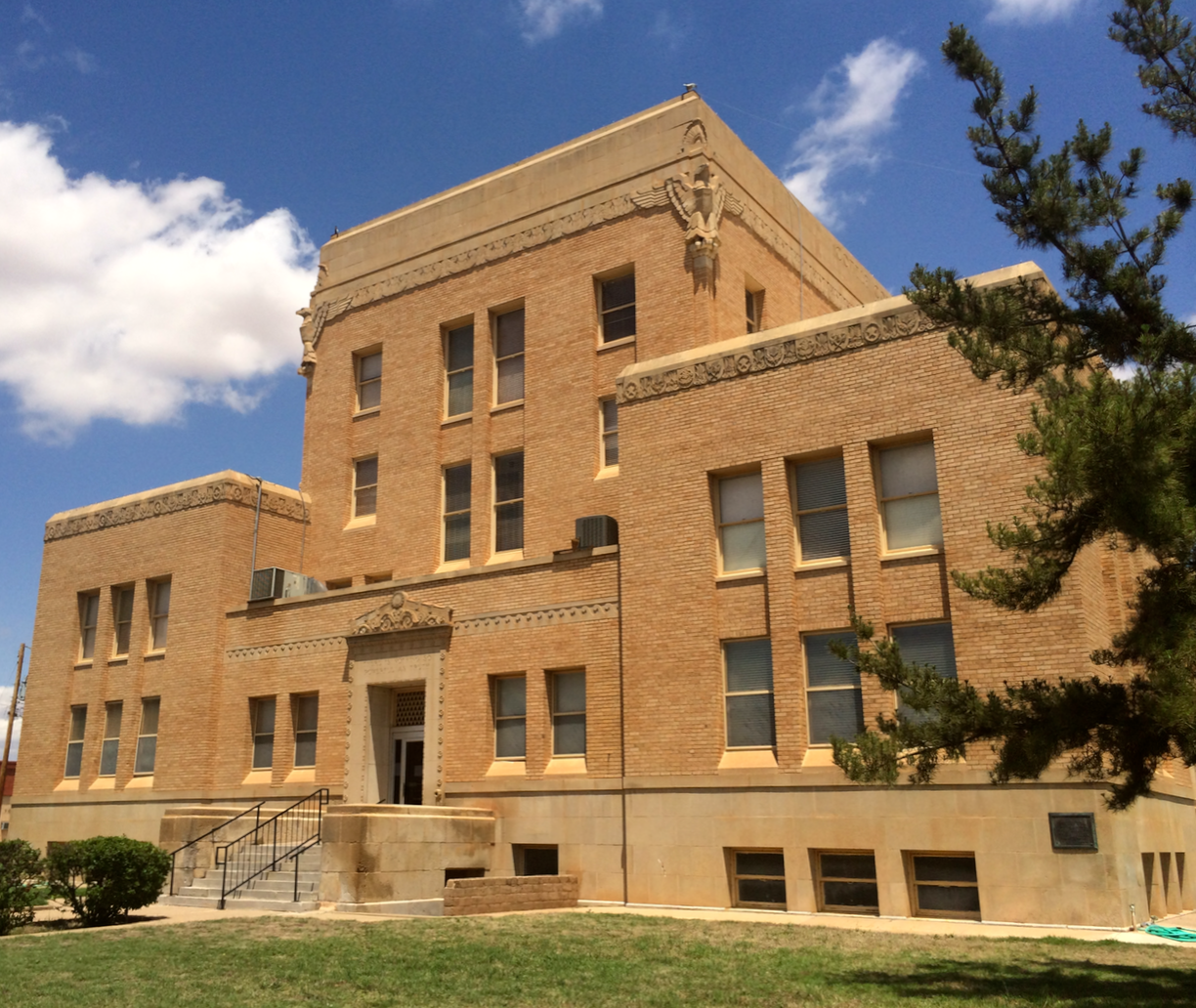 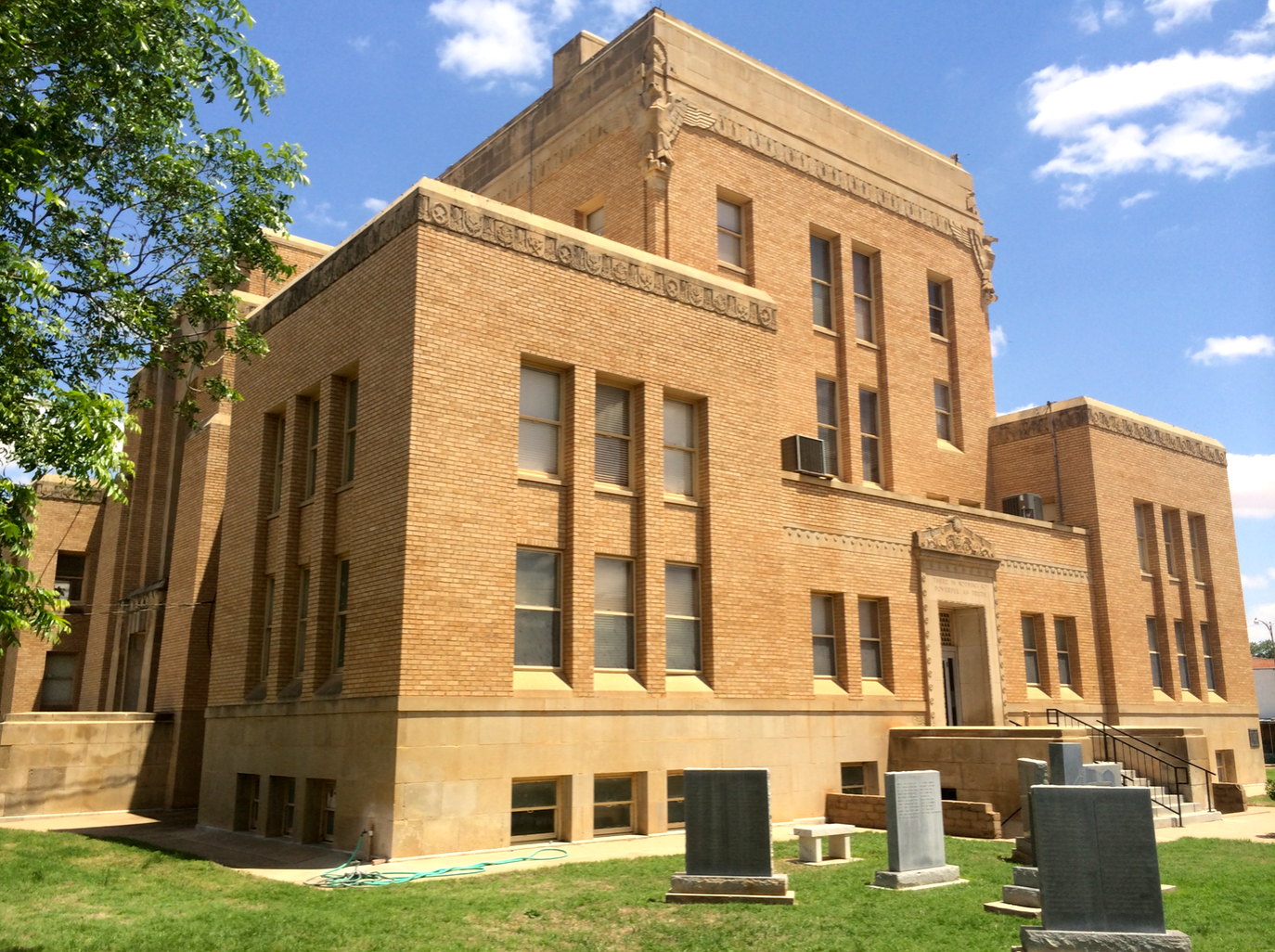 A crowd of county memorials on the western lawn is reminiscent of a small cemetery. 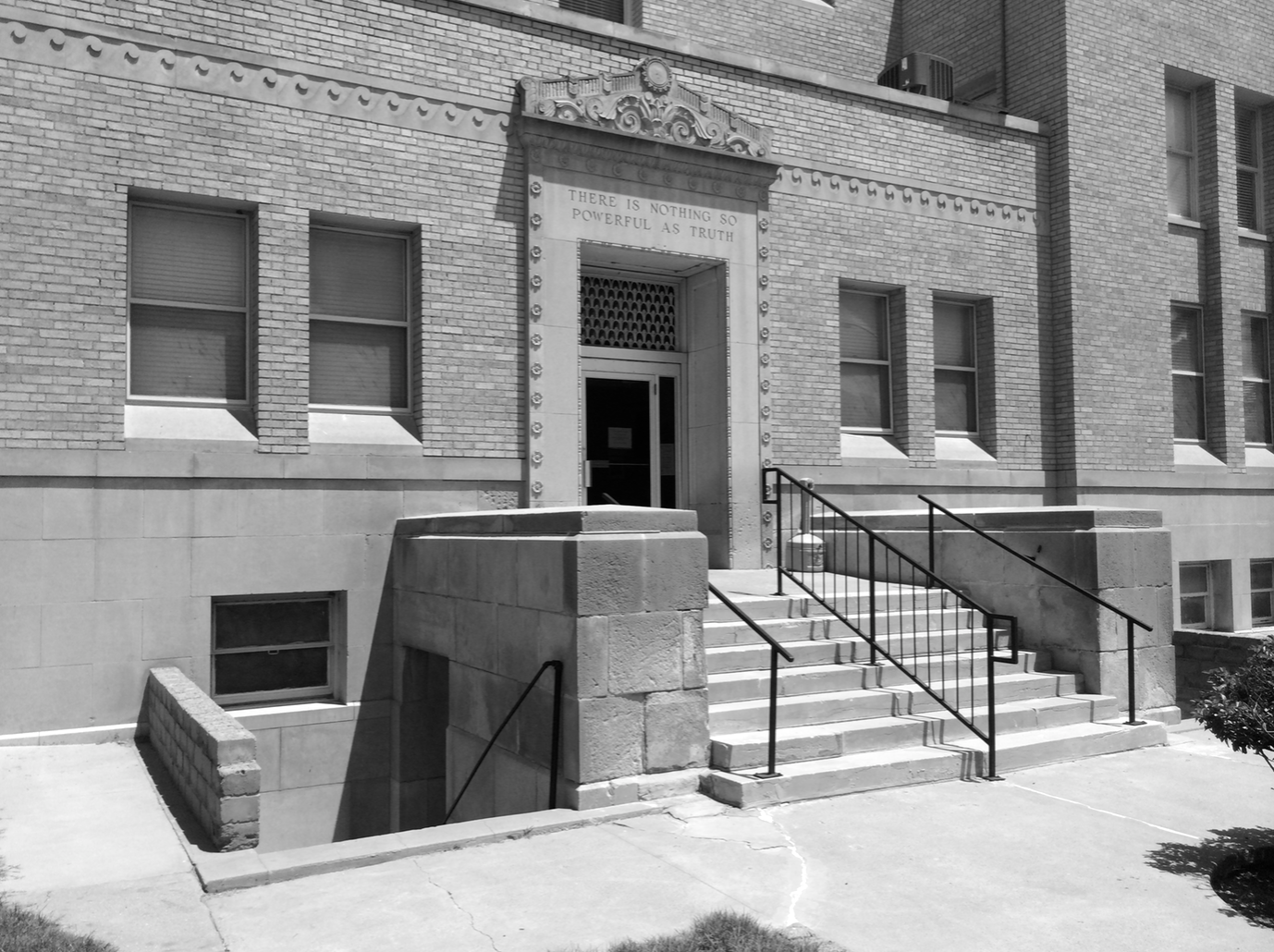 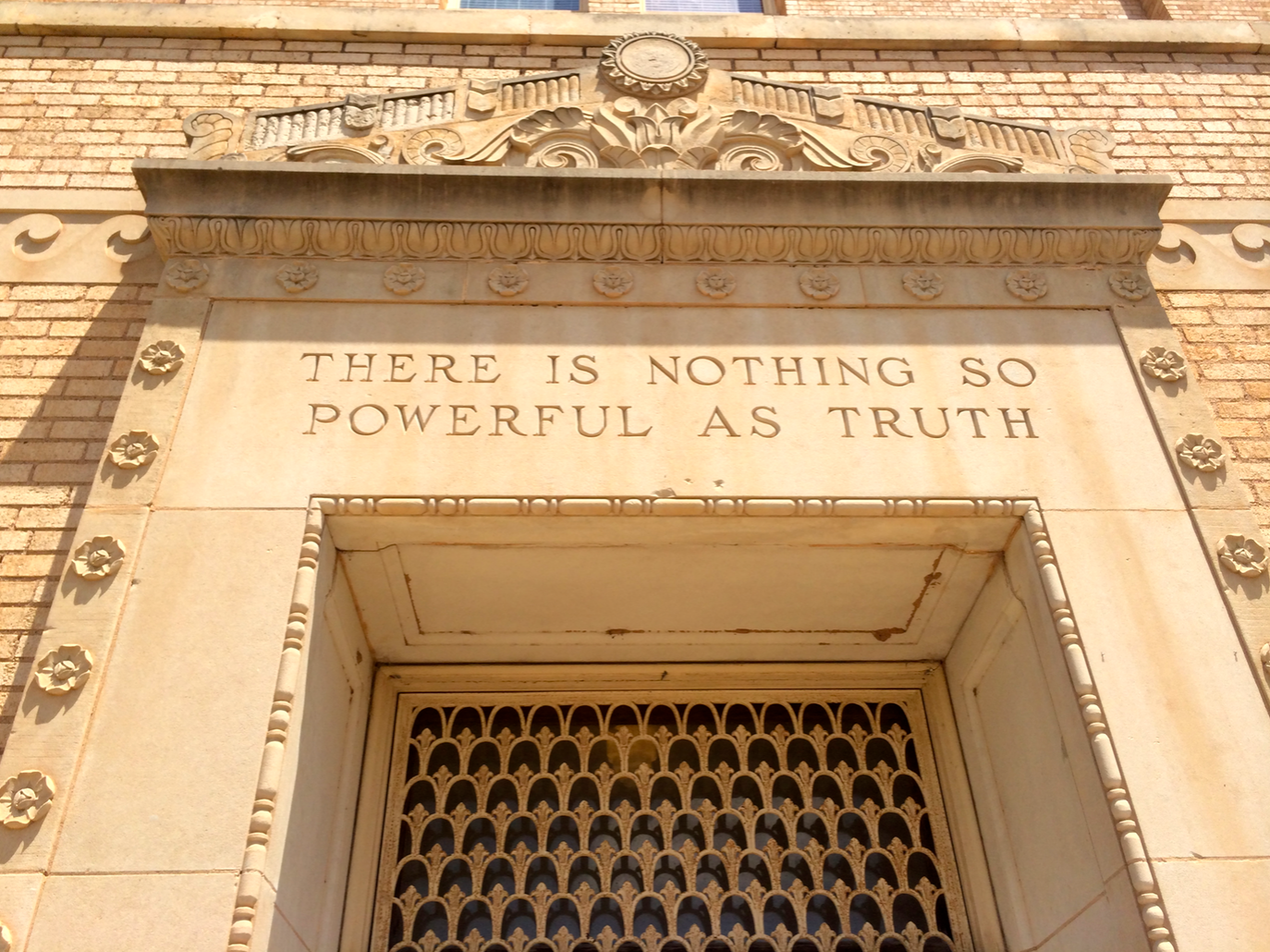 Every side of the courthouse has an ethical reminder engraved either above the doors or near the roof. This one is above the western entrance. 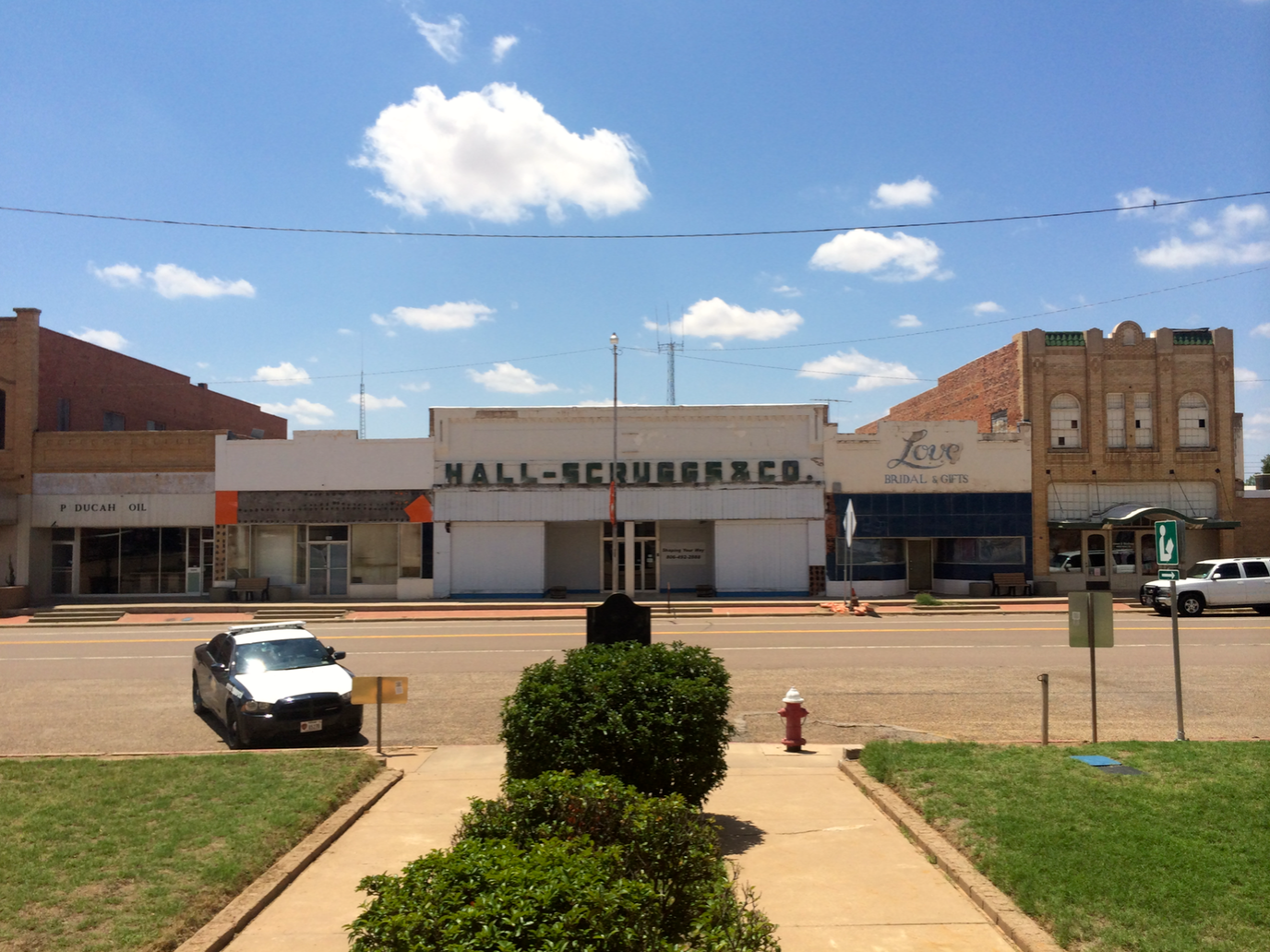 9th Street, as seen from the western doors 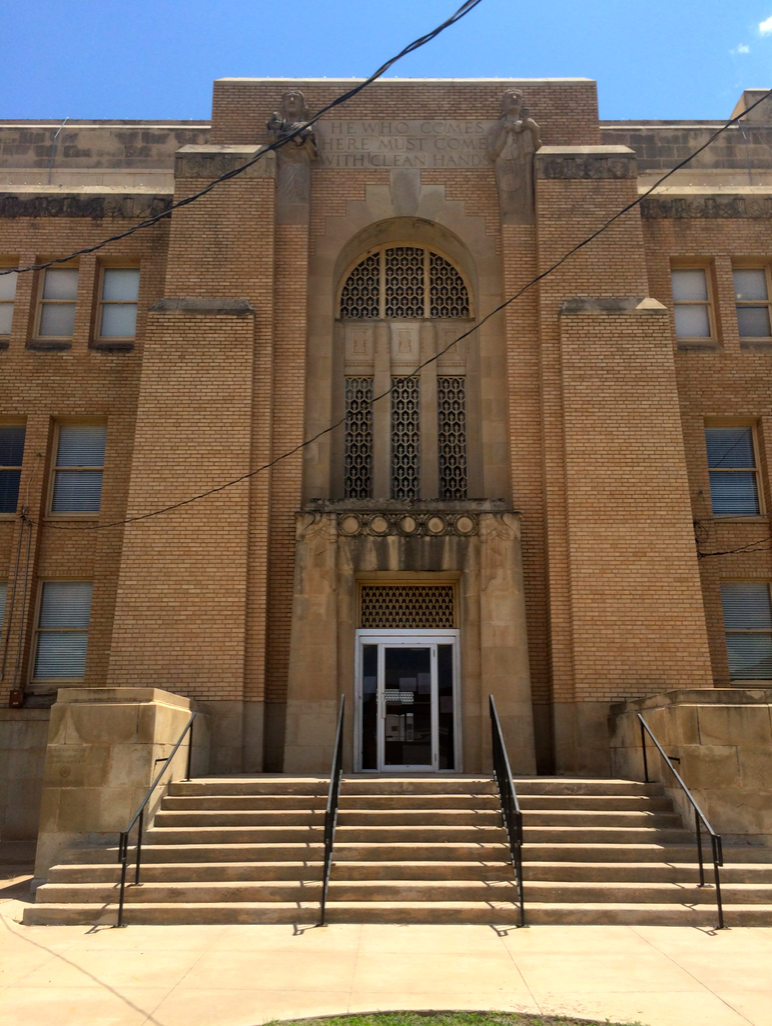 The northern entrance, on Backus Street

The view from the northern entrance 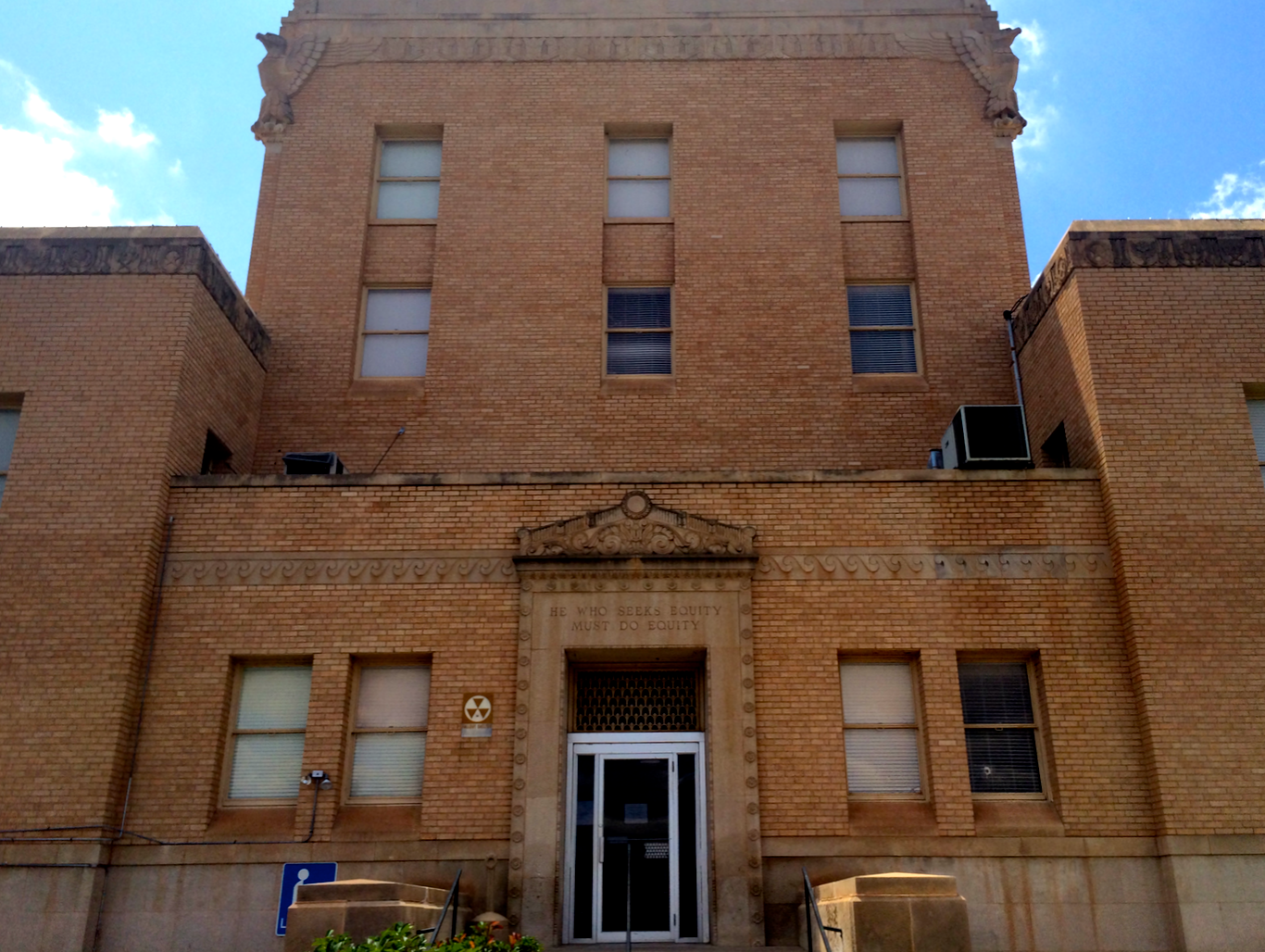 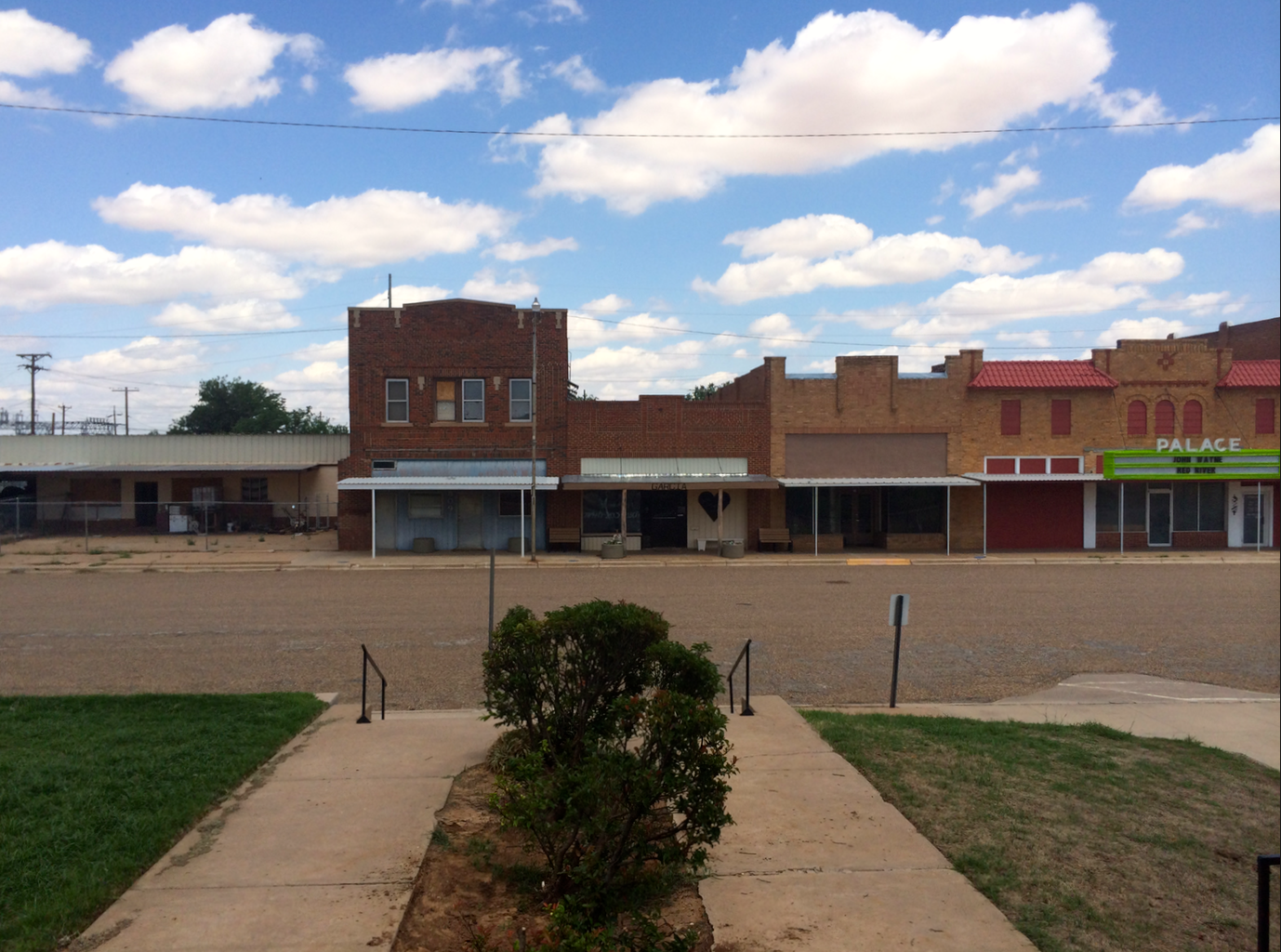 The view of 8th Street from the eastern doors 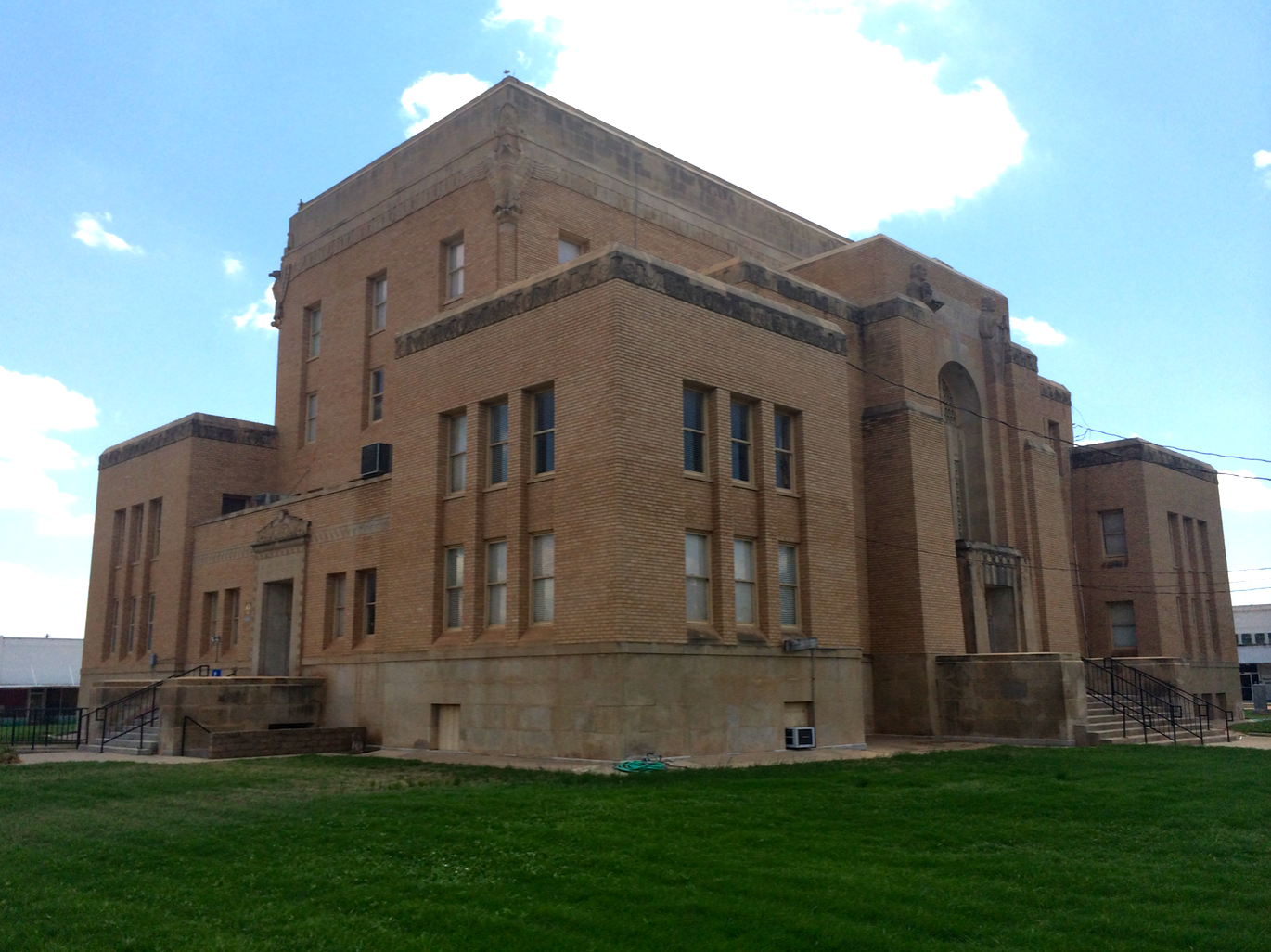 Every small town has a proper Palace Theater or something close to it. 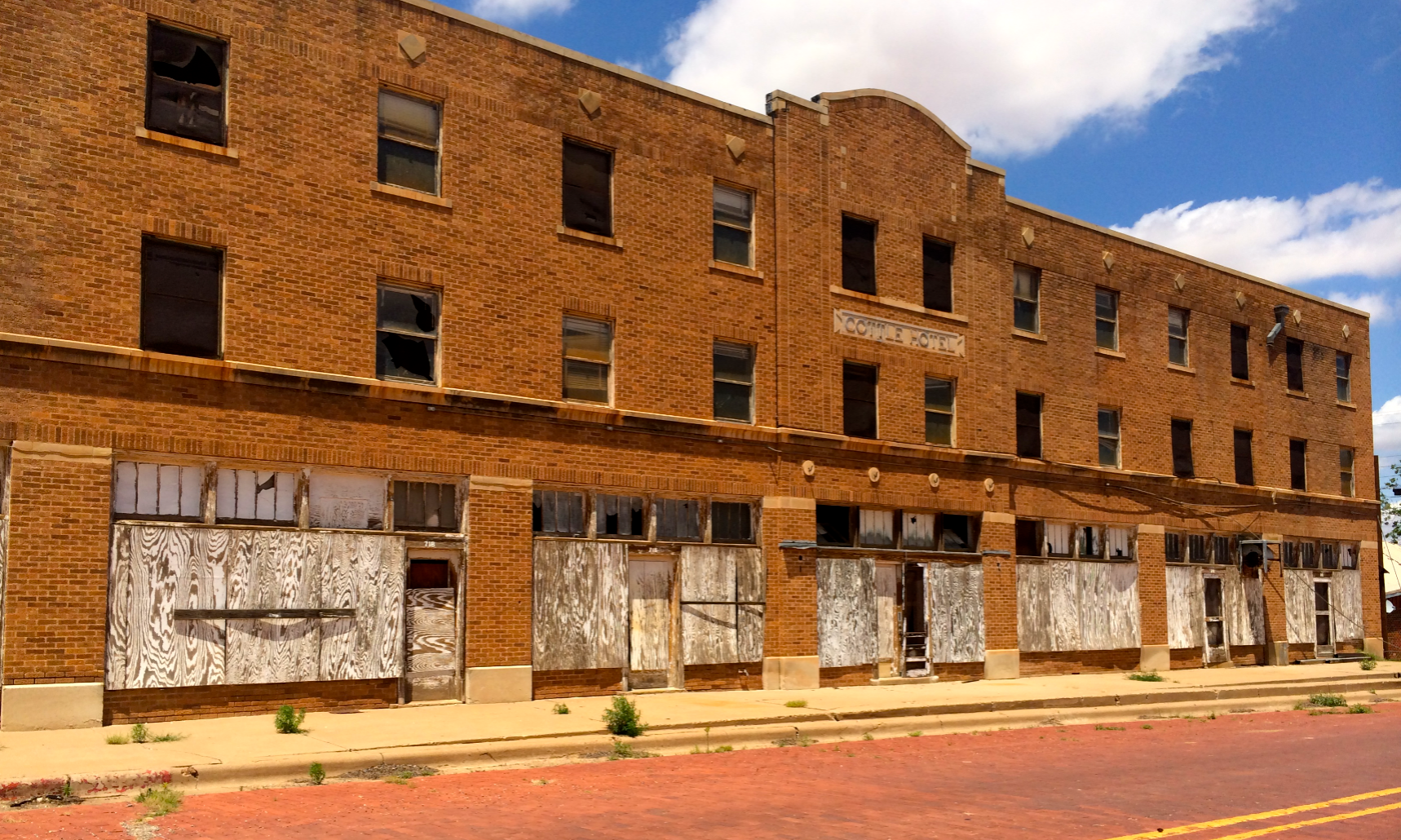 The historic Cottle Hotel is at the corner of Backus and 8th Streets, diagonally across from the northeast corner of the courthouse. It’s no longer occupied.