“Camp County, the third smallest Texas county, comprises 203 square miles of the East Texas timberlands, an area that is heavily forested with a great variety of softwoods and hardwoods, especially pine, cypress, and oak. The terrain ranges from nearly level to hilly; the largest portion of the county is undulating to rolling. The county is located in northeastern Texas, forty miles from the state’s eastern boundary and fifty miles from the state’s northern boundary.”

“Anglo settlement began in the late 1830s, with most of the early settlers coming from the southern states of Georgia, Alabama, and Tennessee. The earliest communities in the area were Pittsburg, near the center, and Lilly and Pine, in the southwestern and south central part. There were probably some early settlers along Big Cypress Creek in the northern portion also, but no information is available about their activities. The first post office, established in 1848, was located in the community known now as Pine, and was called Pine Tree. In 1855 a post office was also established at Pittsburg, and by 1860 this town had become the most important supply center for northern Upshur County farmers.”

“Camp County was separated from Upshur County in 1874 and named for John Lafayette Camp, who was serving as state senator from Upshur County and presented the petitions that led to the action of the legislature. A county seat election was held, and Pittsburg won with 500 votes. Leesburg, to the west, received 228, and Center Point, in the southeastern part, received sixty-nine. Following the election, a courthouse was constructed of locally manufactured brick on a lot donated by William Pitts. Since the 1874 election the choice of county seat has never been contested.” 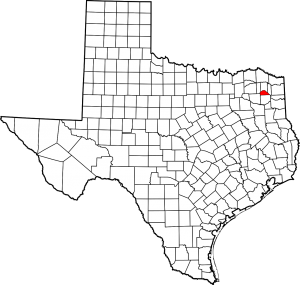 “Although Pittsburg had become an important supply center for area farmers by the 1870s, at its beginning, Camp County was largely rural and agricultural. At the time of the 1880 census, most residents lived and worked on the county’s 607 farms. For the next sixty years the economic base of the county was agriculture. During that period cotton was the principal cash crop, and for most of this period corn was the principal food crop. From 1880 until 1940 census returns indicated that at least two-thirds of the harvested cropland of the county were planted in these two crops.”

“Beginning with the imposition of the poll tax in 1902, the state government implemented a series of procedures that effectively limited black political participation. In Camp County these measures meant that the Democratic hold on the county was strengthened. The measures, coupled with the apparent certainty of a Democratic victory, also acted to keep many whites, particularly poorer ones, away from the polls. … In the late 1940s the impediments to participation by blacks and poor whites were gradually lifted, beginning with the end of the white primary. Although the population of the county was declining, voter turnout jumped from 1,488 in 1948 to 2,487 in 1952.”

“Camp County was hit hard by the Great Depression, which actually began for most southern farmers in the 1920s. Between 1920 and 1930, although the average size of the county’s farms had increased from sixty-one to eighty-six acres, the average value had fallen from $3,253 to $1,722. The programs of the New Deal provided relief that ameliorated the worst effects of the depression for many of the county’s residents. In 1933, for example, cotton-reduction payments to county farmers from the Agricultural Adjustment Administration totaled a little over $56,000.”

“The agricultural depression and the programs of the New Deal designed to deal with it also signaled the beginning of the end of cotton culture in Camp County. Between 1930 and 1940 the number of acres farmers planted in cotton declined from a little over 28,600 to a just over 12,700 acres. The decline continued, and by 1969 there were no cotton fields in the county. Cotton was replaced by livestock rather than by other crops. By 1982, 97 percent of the county’s income from agriculture was generated by livestock and livestock products.”

“The decline in the number of farmers led to a decline in county population. By 1960 it had fallen from the 1920 high of 11,103 to 7,849. A more dramatic decline was probably prevented by events in Pittsburg, the county seat. As the state began to industrialize, Pittsburg participated in the trend. In 1930, 197 county residents had been employed in manufacturing, and most of the industry was in Pittsburg.”

“The largest industry in the county in the 1970s and early 1980s was Pilgrim Industries, a poultry-processing company that employed more than 500 people in 1976. Pine and hardwood production in 1981 totaled 2,168,053 cubic feet. Oil was discovered in Camp County in 1940, and in subsequent years the production of petroleum and natural gas contributed to the local economy. In 1982 more than 435,000 barrels of oil and almost 4,323,000 cubic feet of gas-well gas were extracted from Camp County lands.”

“In the early twenty-first century agribusiness, chicken processing, light manufacturing, and the timber industry were the key elements of Camp County’s economy. In 2002 the area had 399 farms and ranches covering 69,343 acres, 50 percent of which were devoted to crops, 32 percent to pasture, and 14 percent to woodlands. In that year farmers and ranchers in the county earned $81,672,000 (down 46 percent from 1997); livestock sales accounted for $80,751,000 of the total. Poultry and poultry products, beef, dairy cattle, horses, peaches, hay, blueberries, and vegetables were the chief agricultural products.” 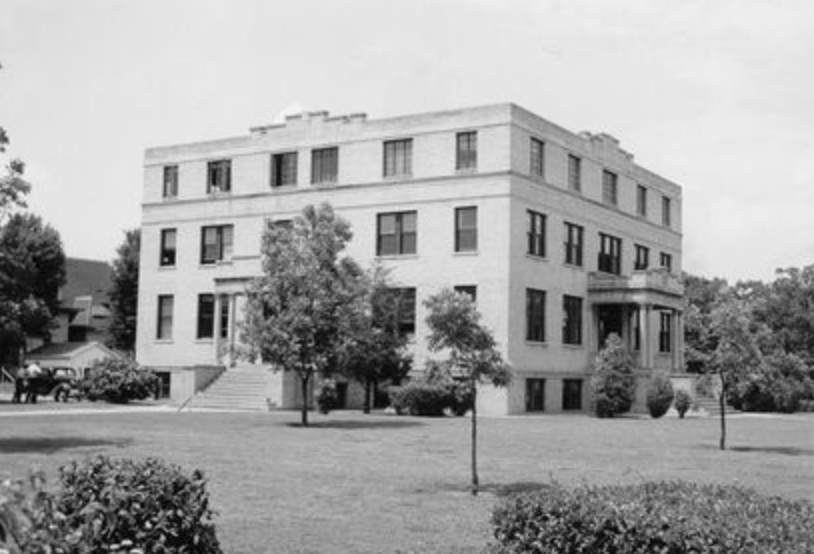 There was another courthouse before this one (from 1870), but I have not found any photo or information of said building.

This one was constructed by contractors Wentzel & Wood. The design is consistent with Classical Revival style, but it also has some “Prairie School” influences. Serving architects were from the firm Smith & Praeger of Paris, Texas.

The Texas Historical Commission describes it as a:

An elevator was added in 1986. That same year, the ceilings were dropped, cast-iron radiators and ceiling fans were added, historic fixtures were removed, and a jail building was annexed to the courthouse. 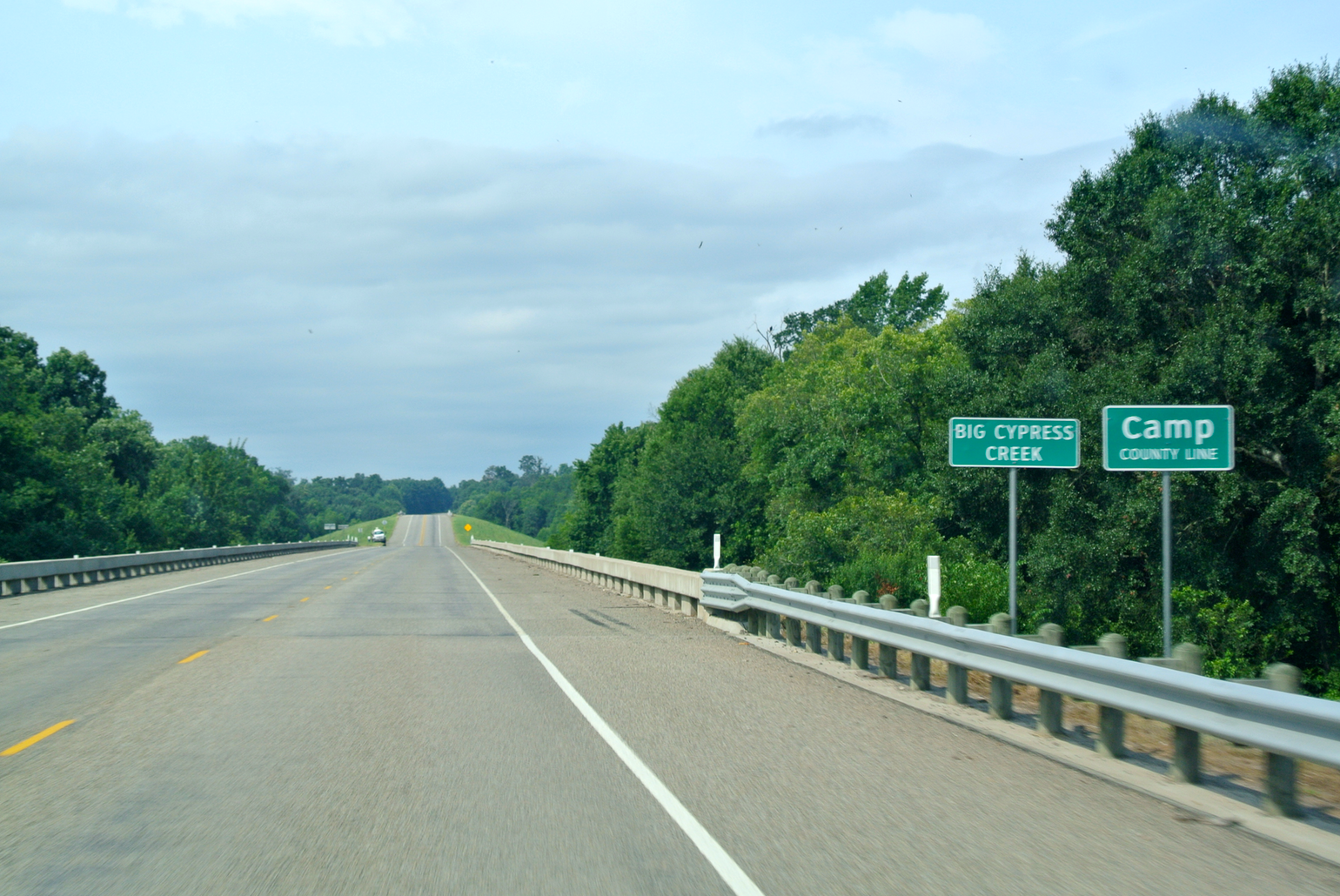 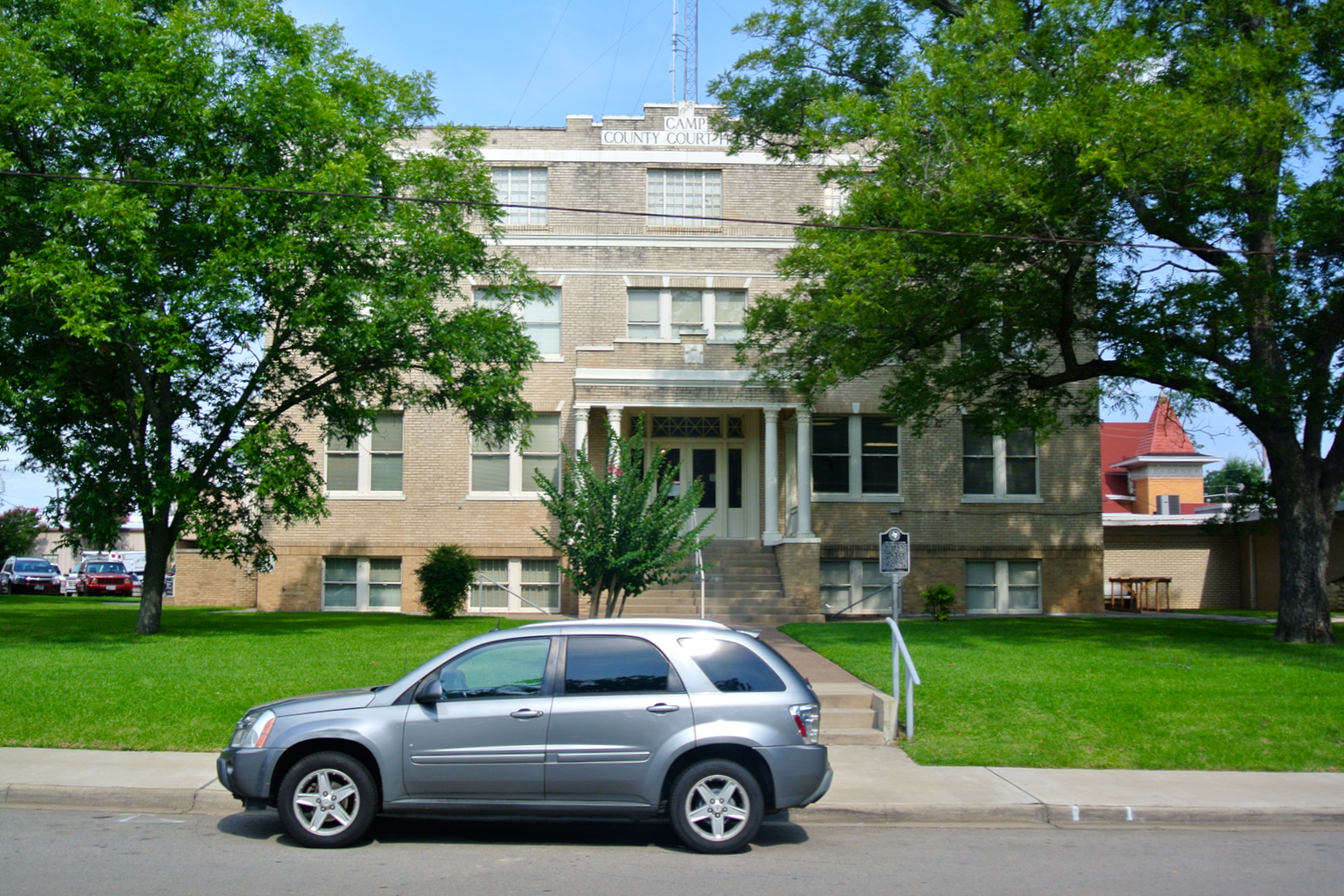 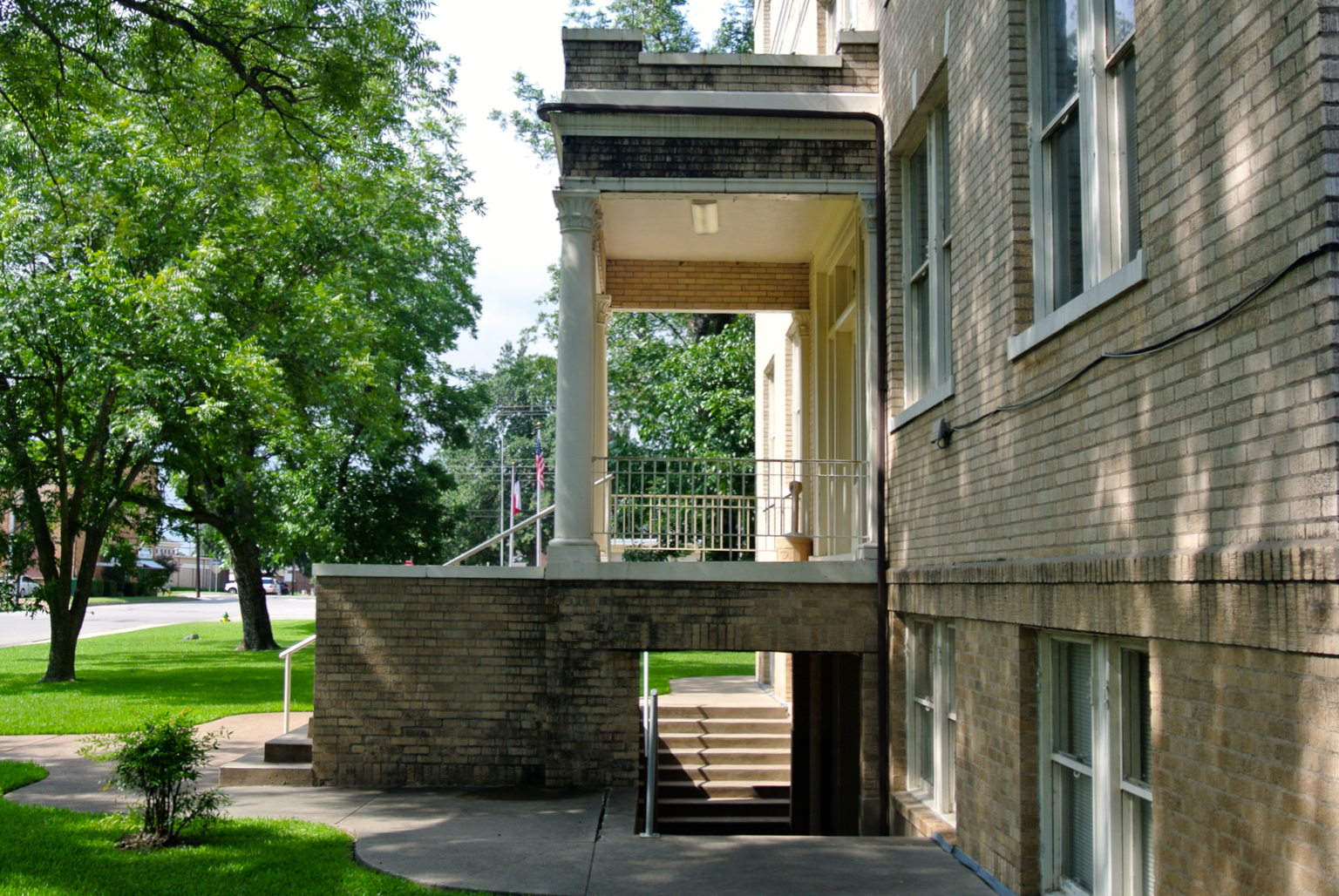 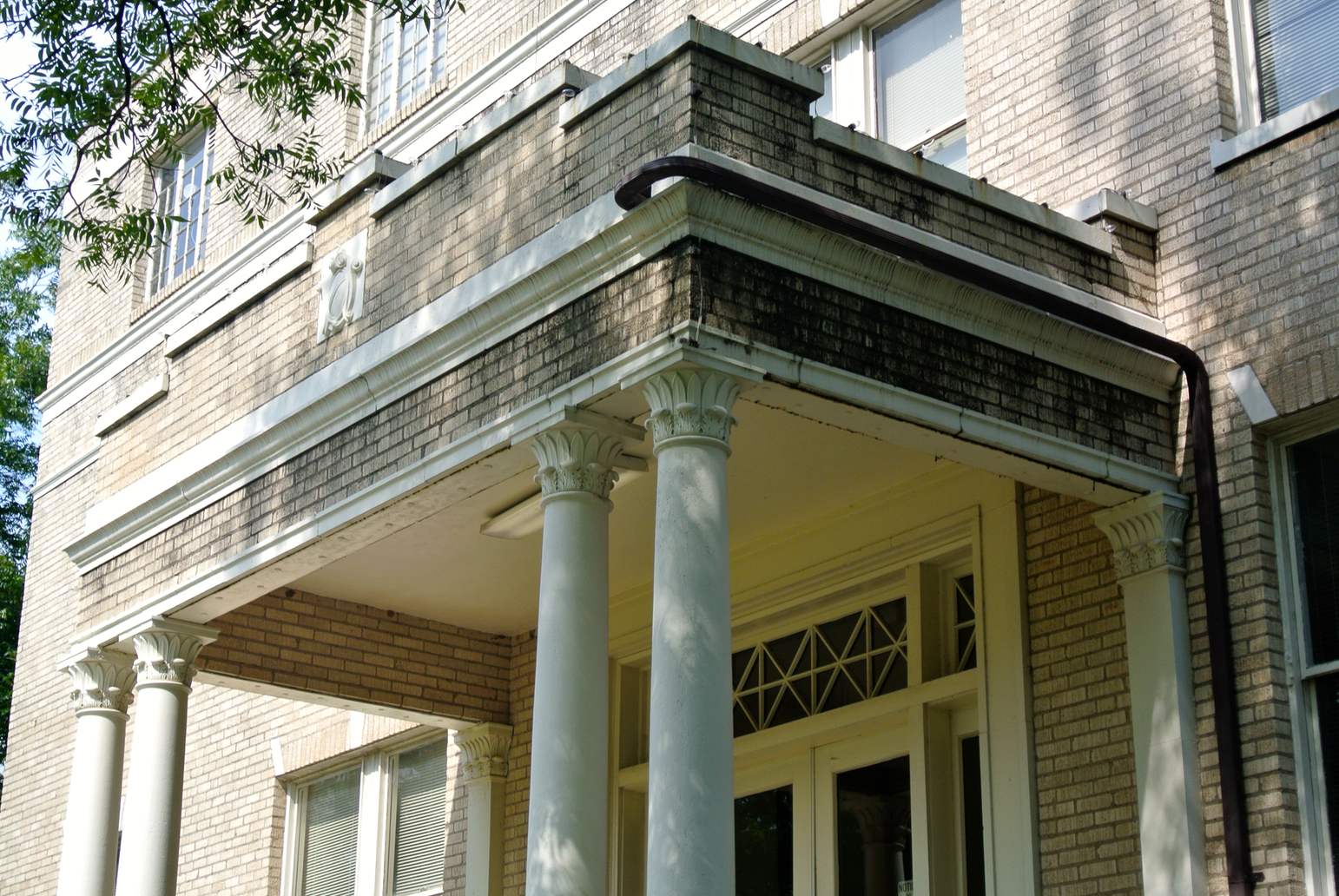 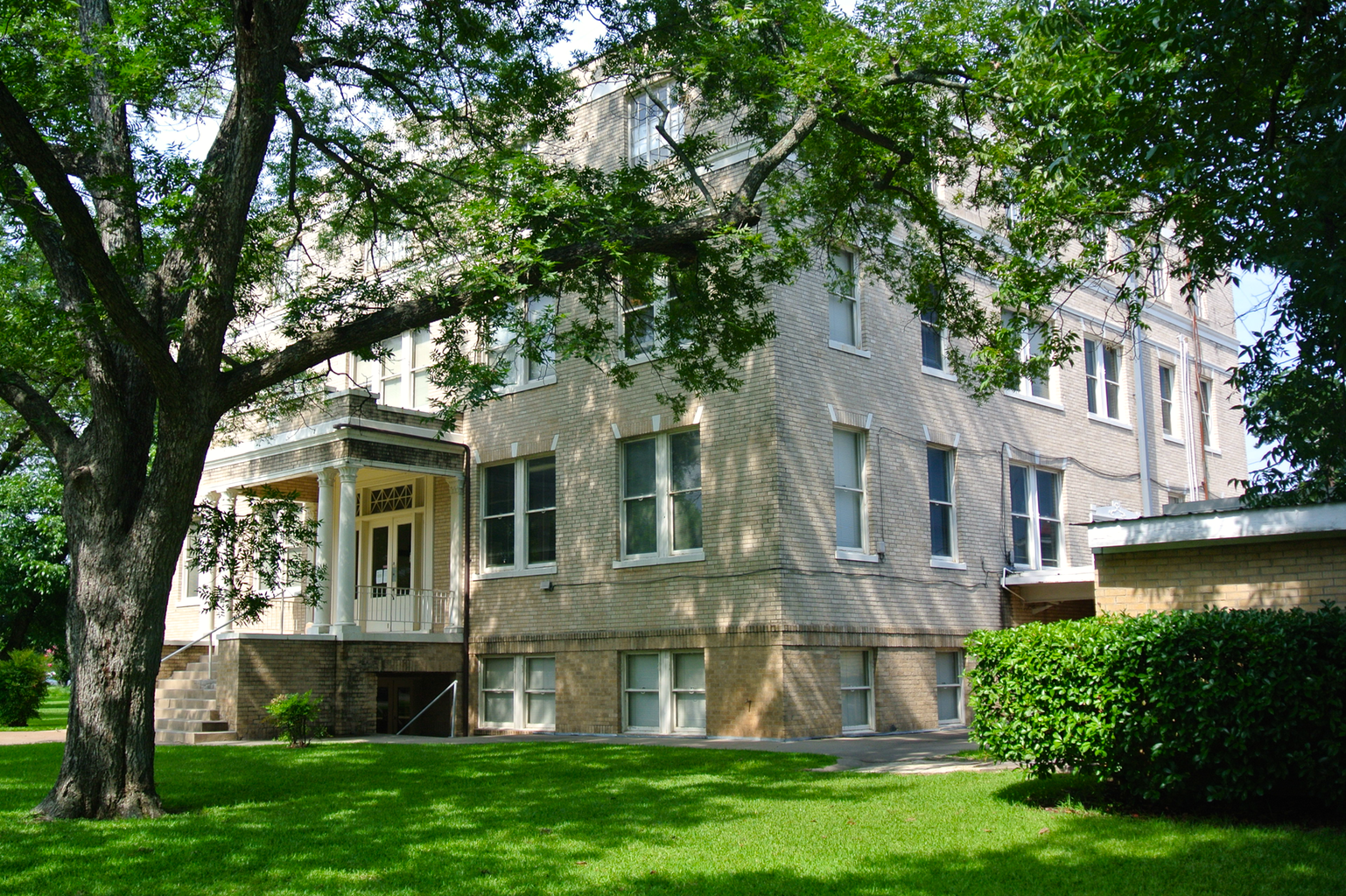 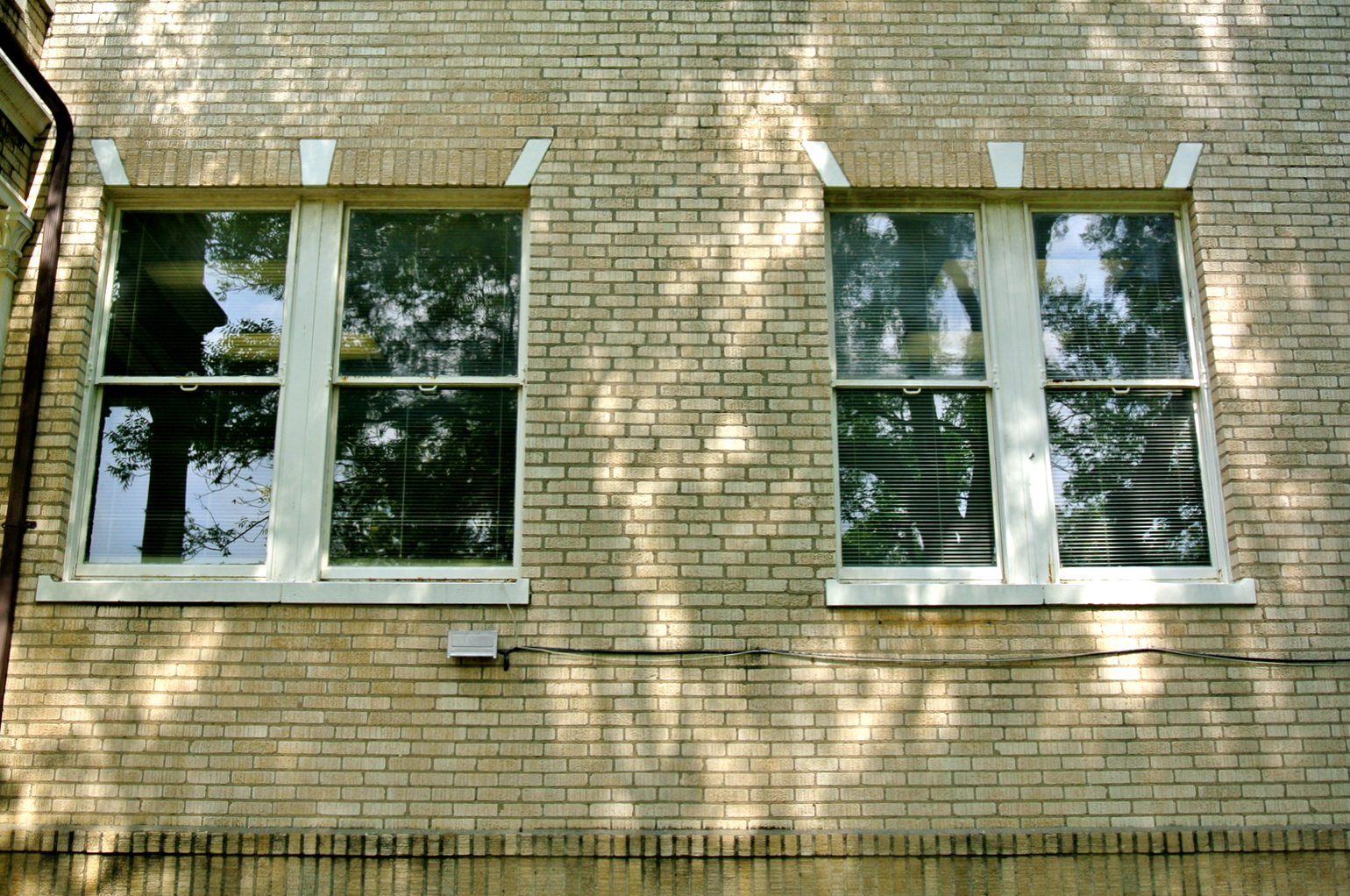 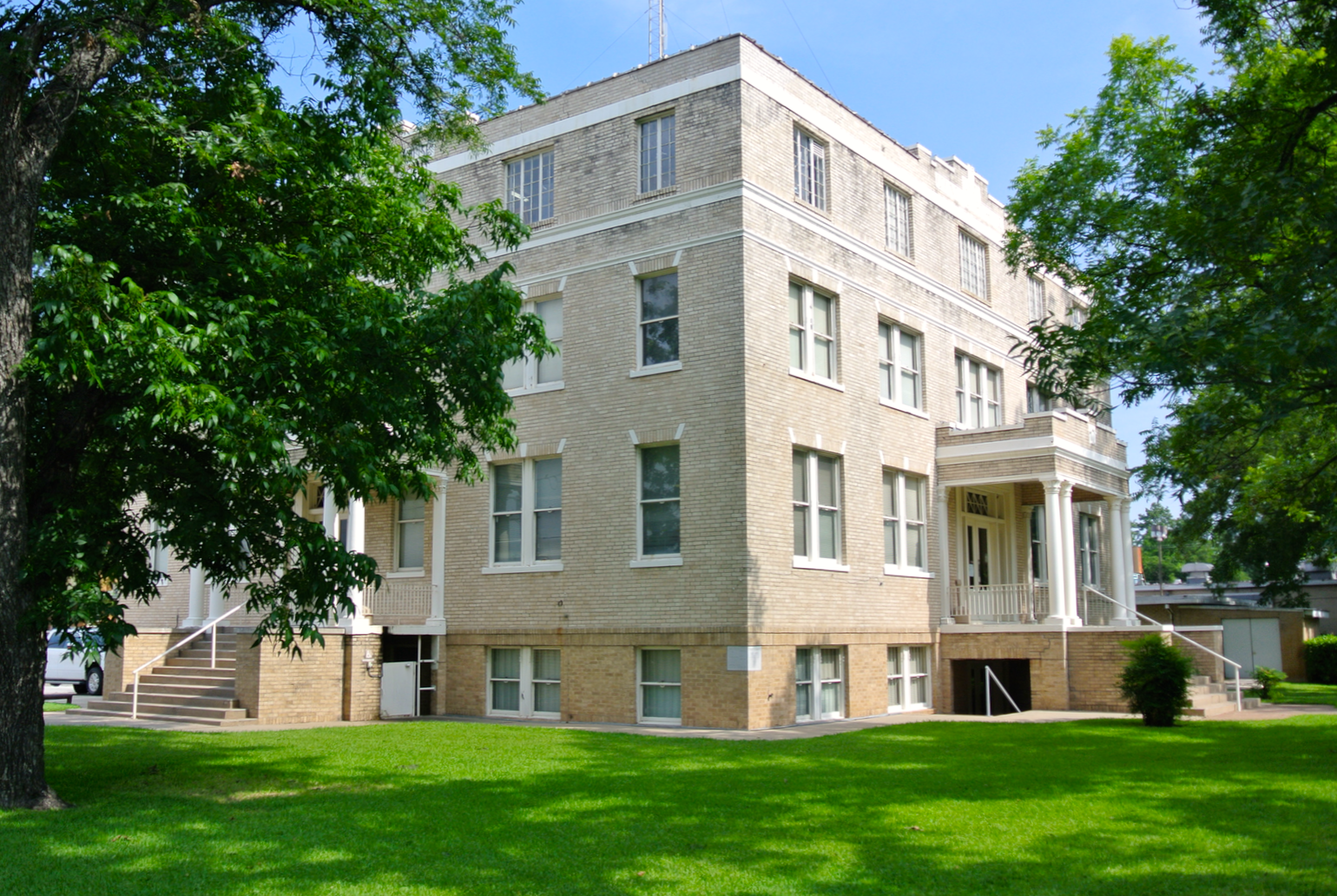 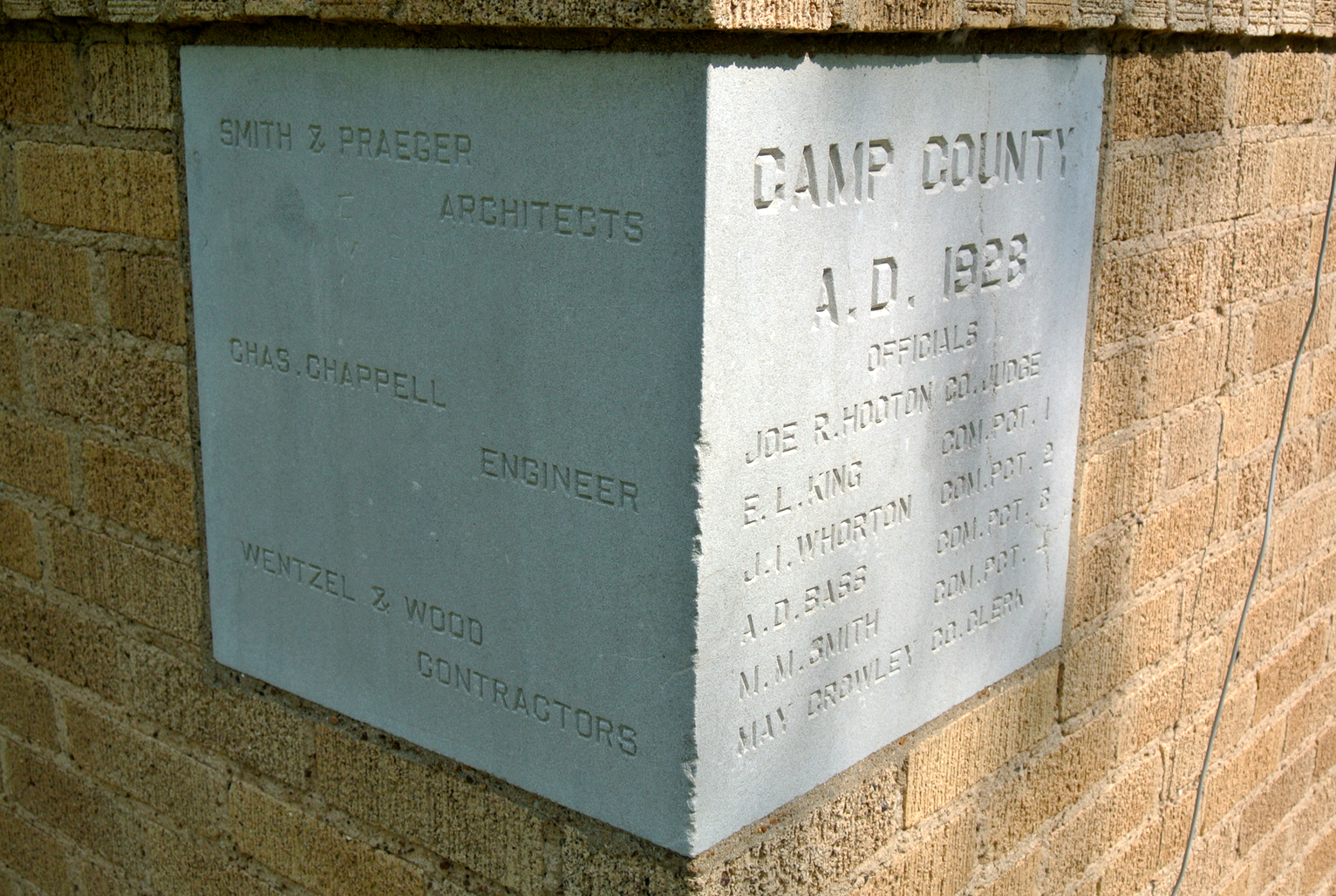 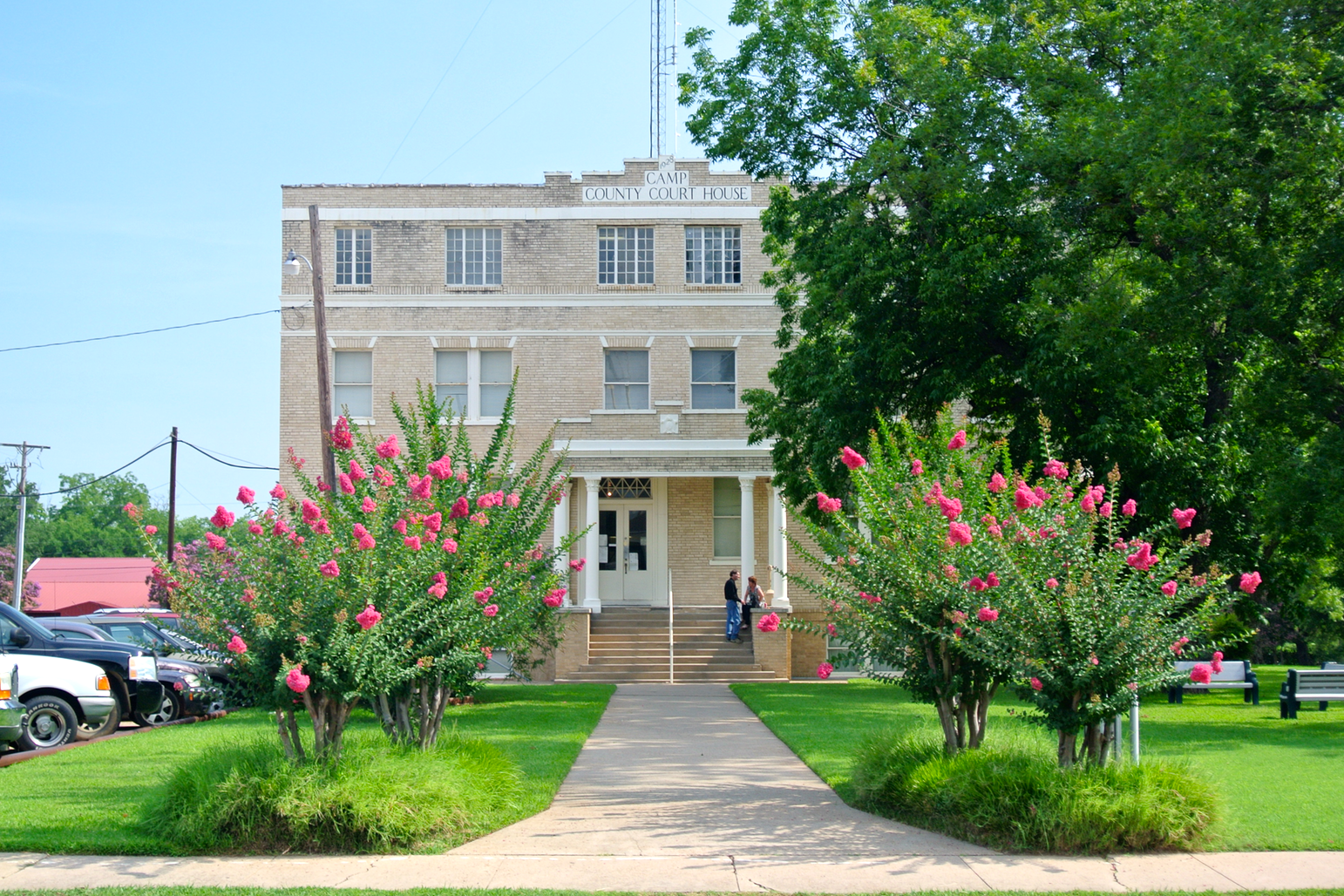 The southern façade and entrance 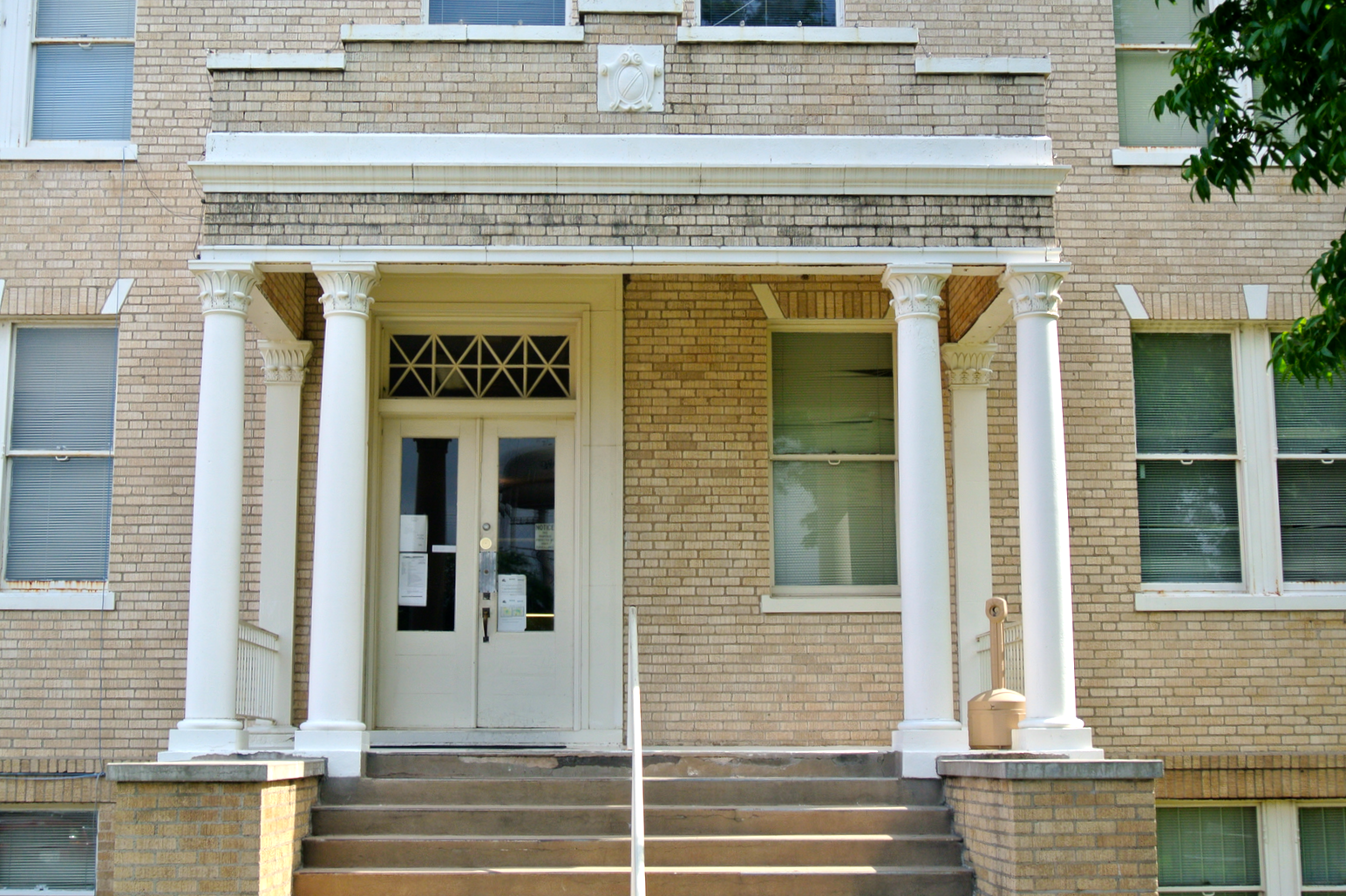 That off-kilter door will get you OCD folks. It got me. 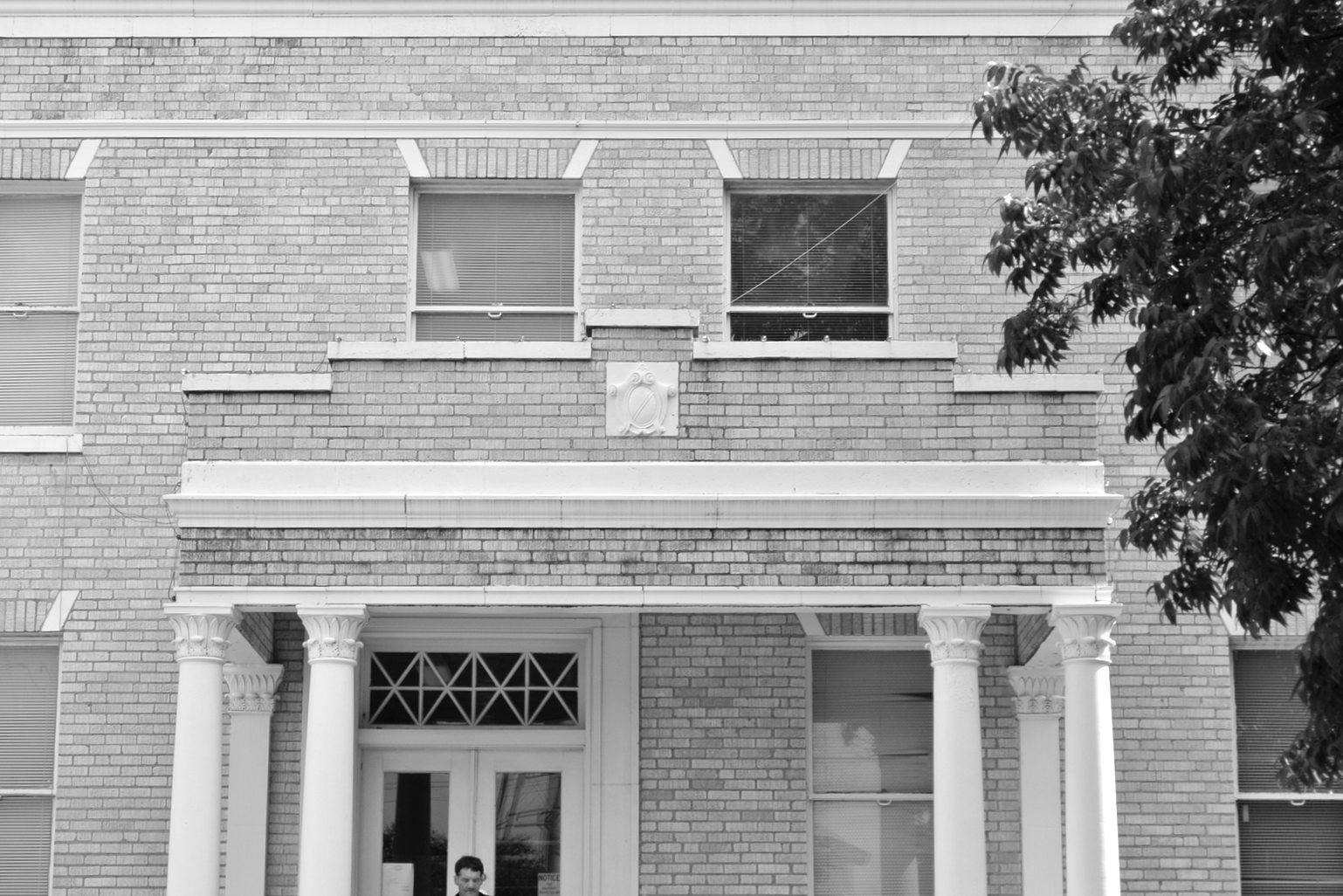 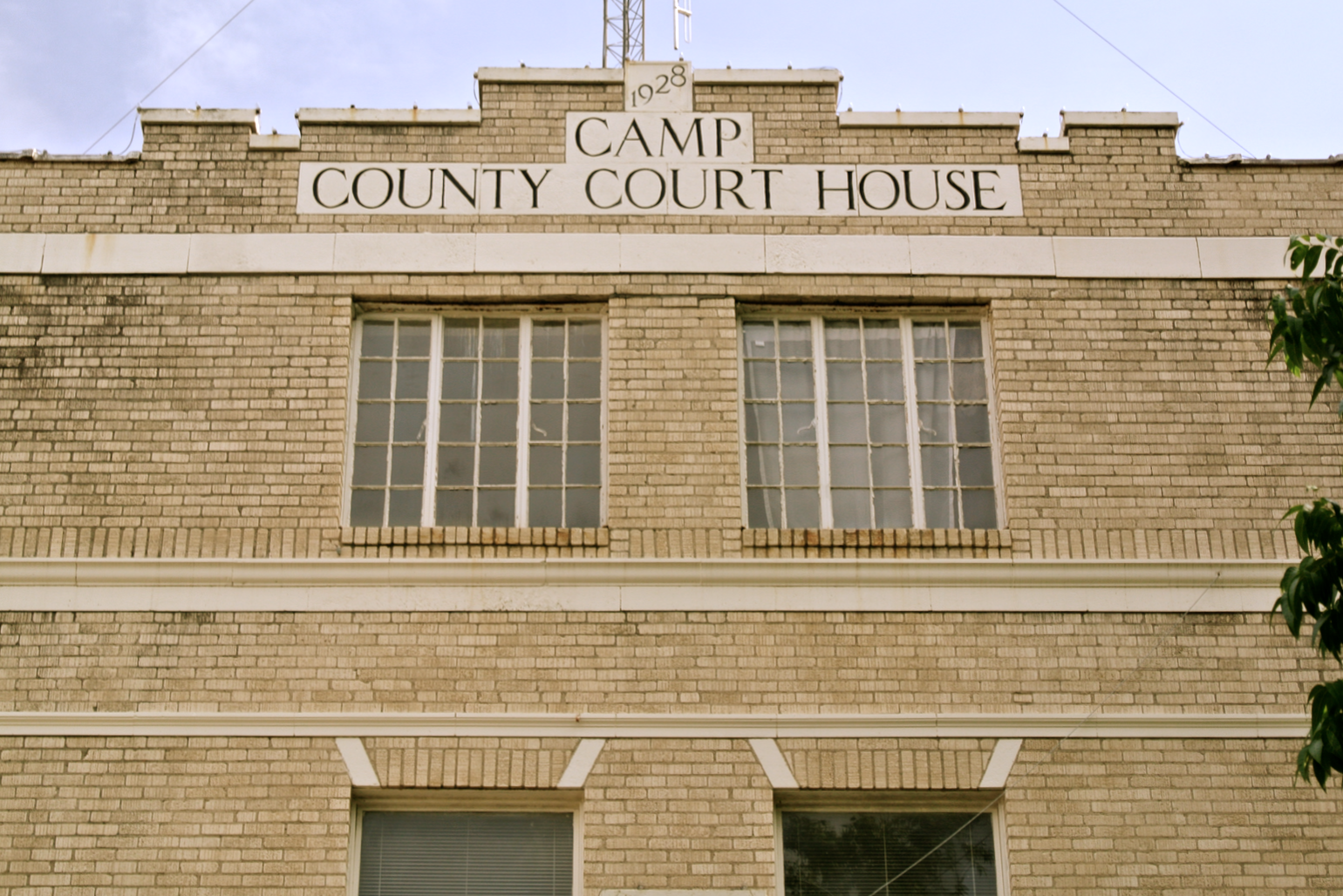 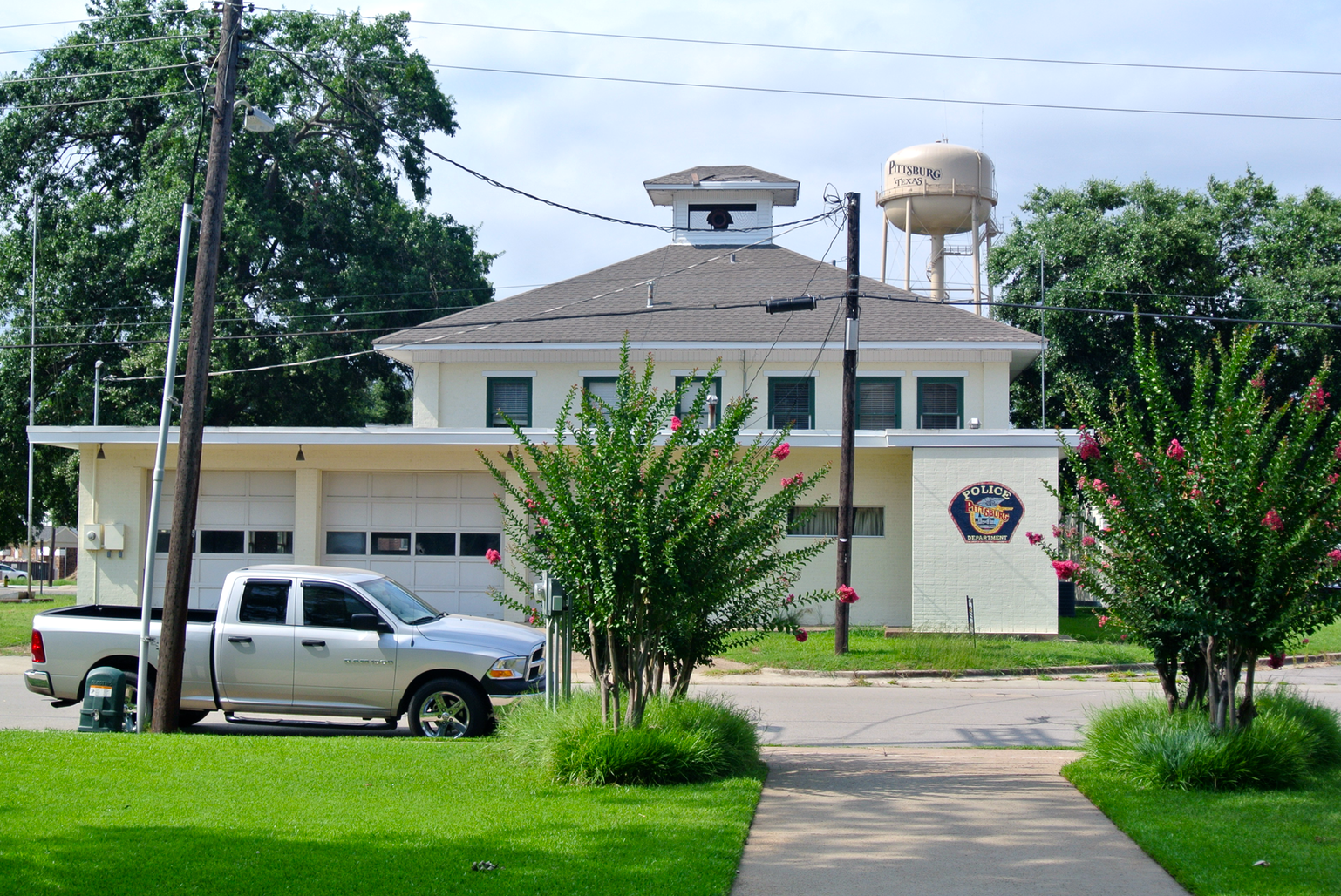 Church Street and the Pittsburg Police Station are across from the southern entrance. 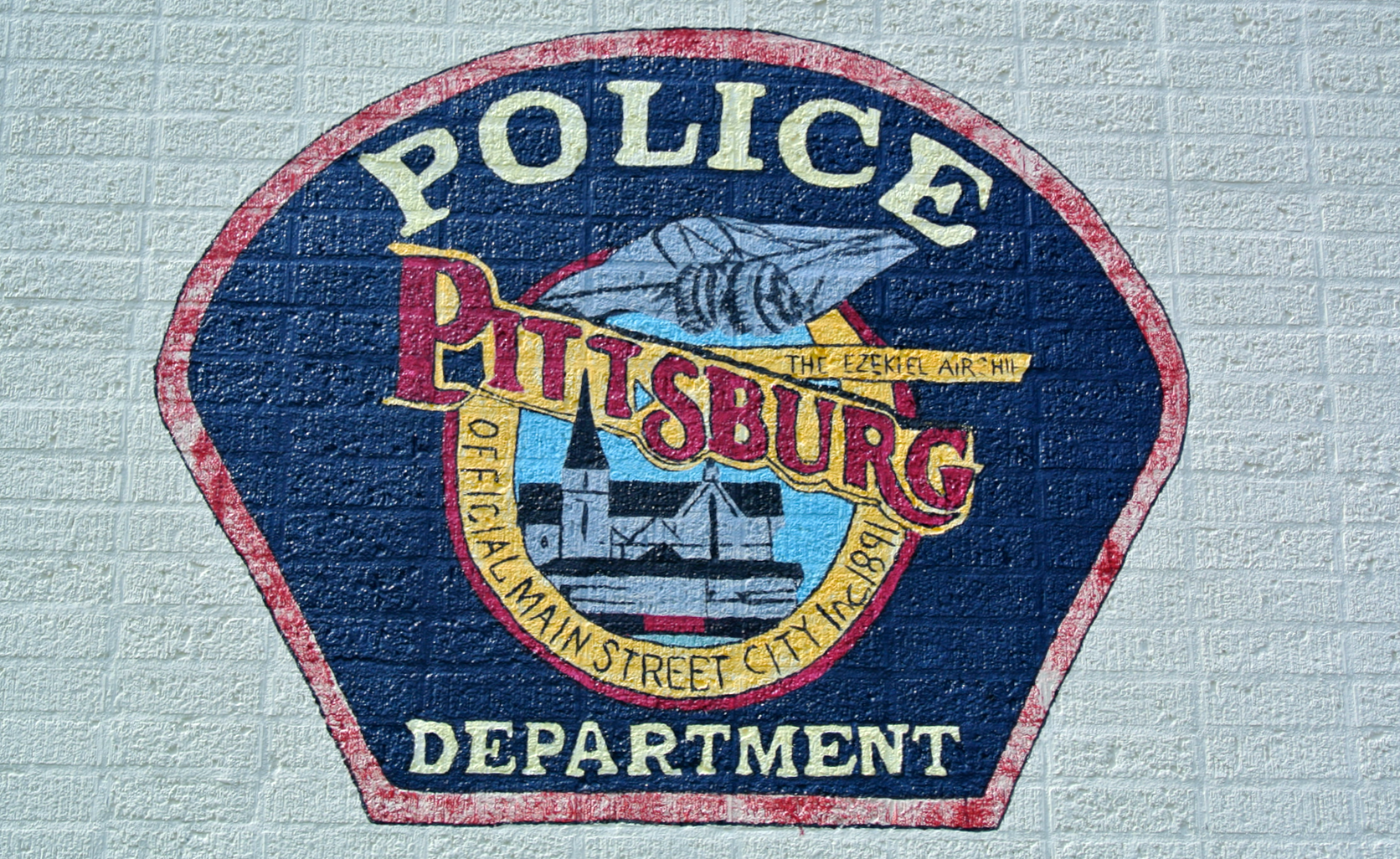 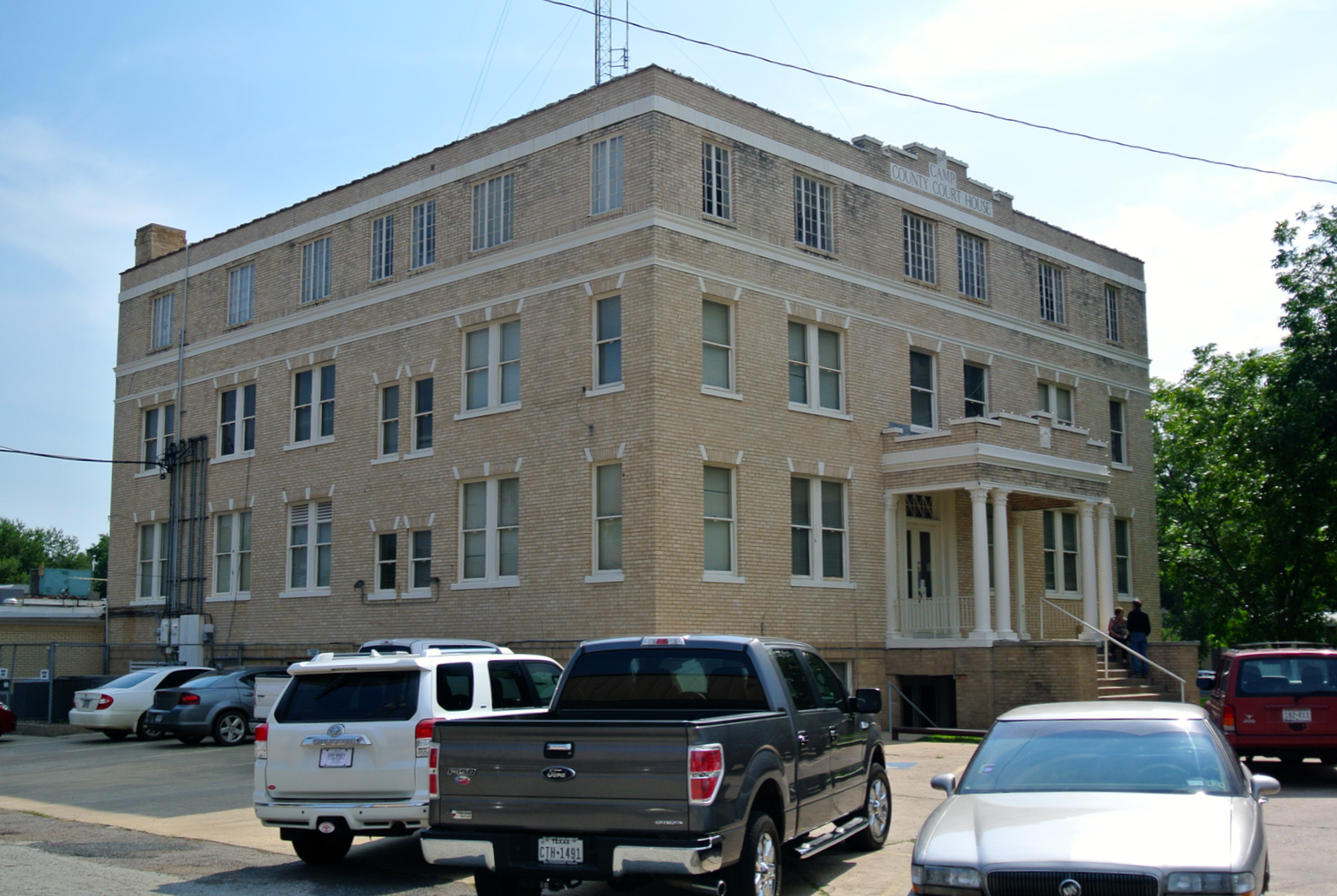 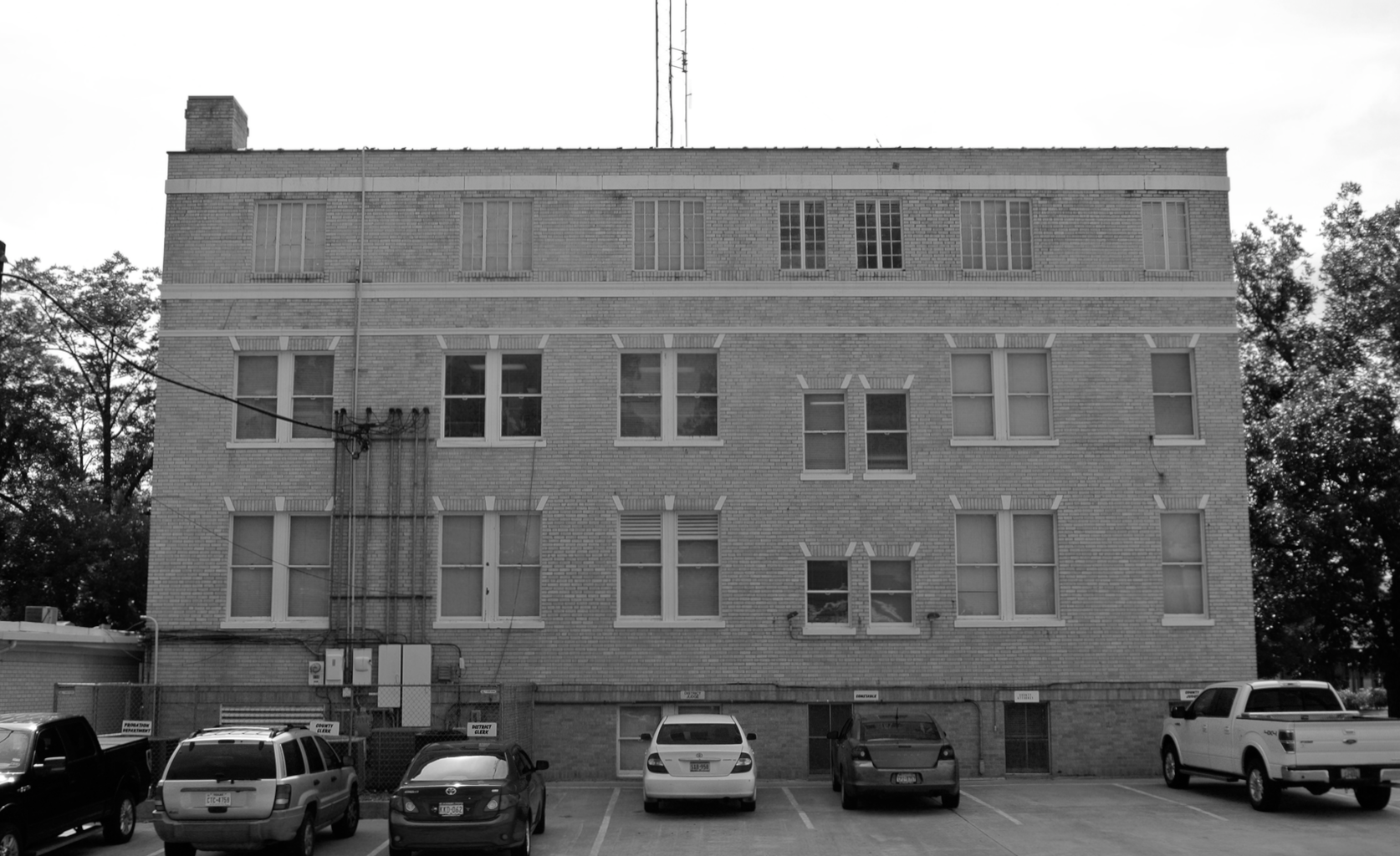 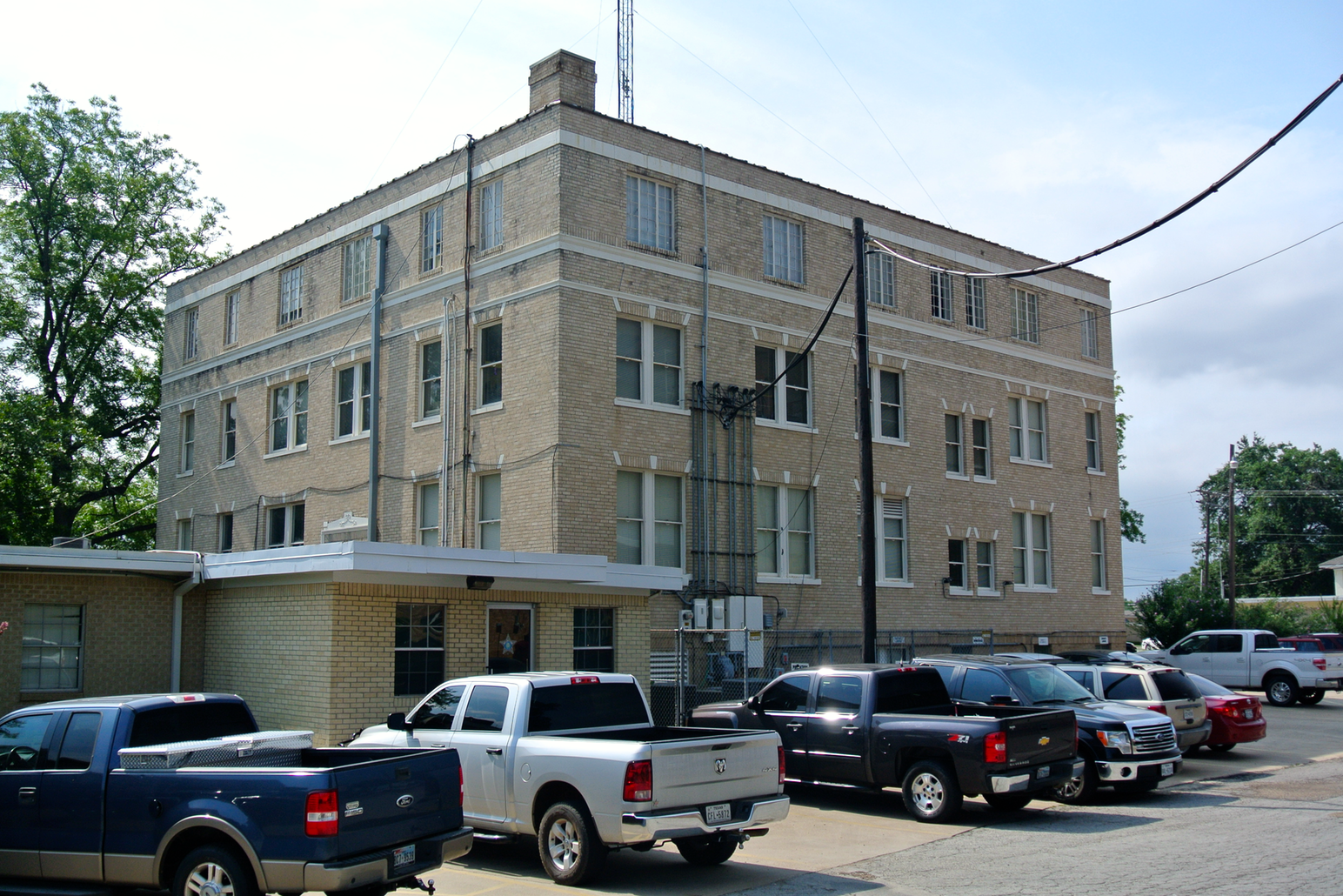 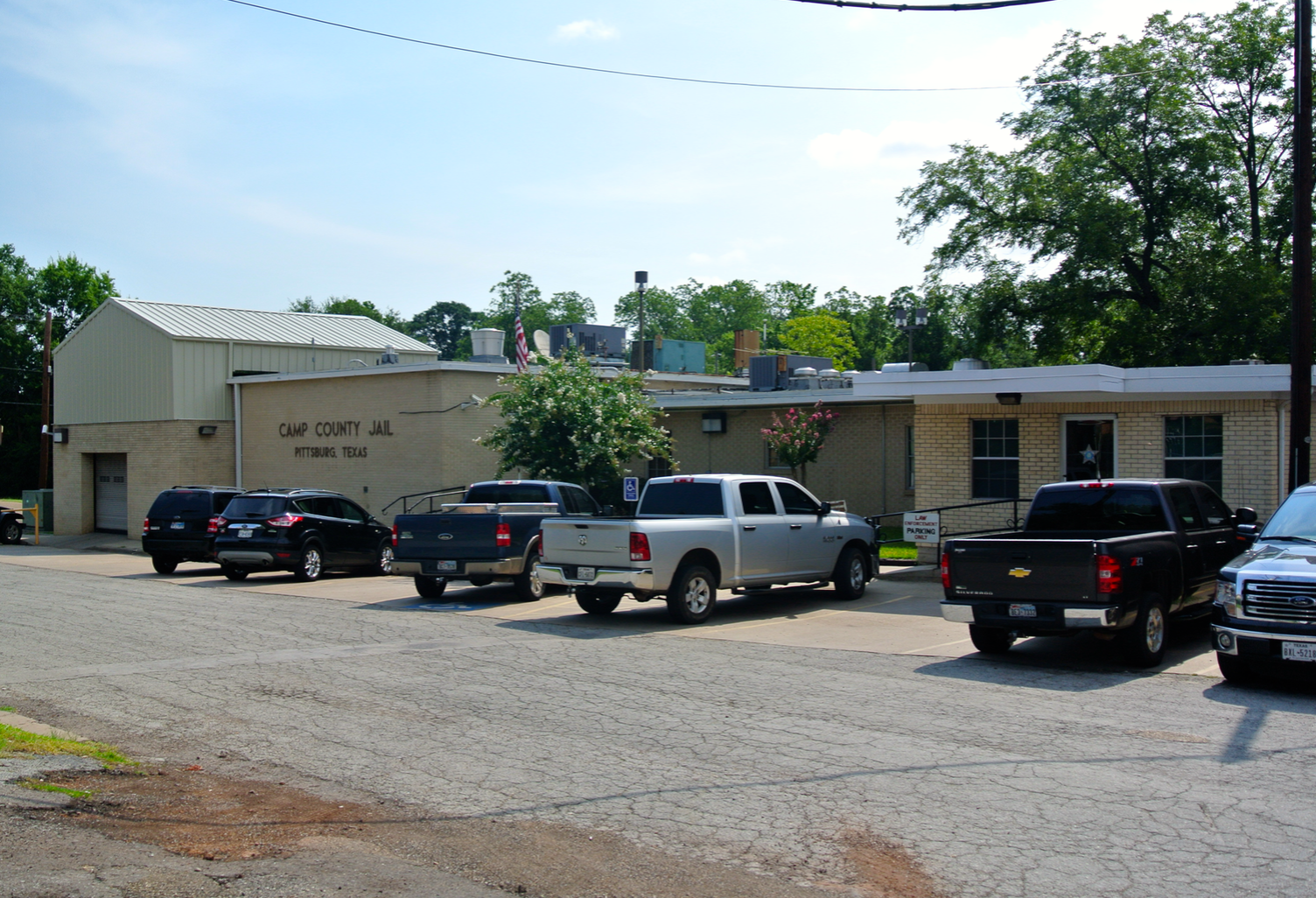 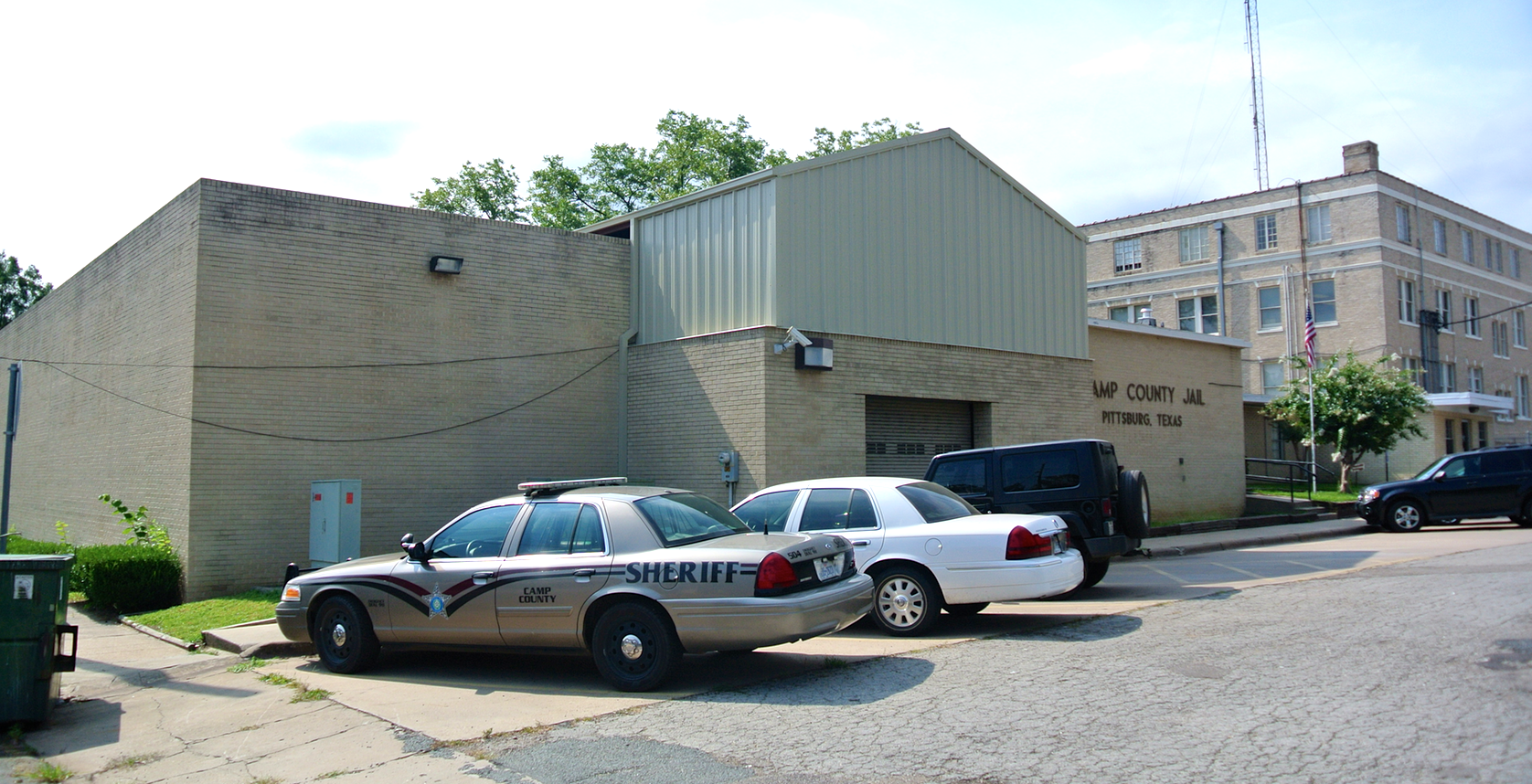 The county jail is connected to the courthouse and faces Tapp Street.

The point of connection between the two facilities 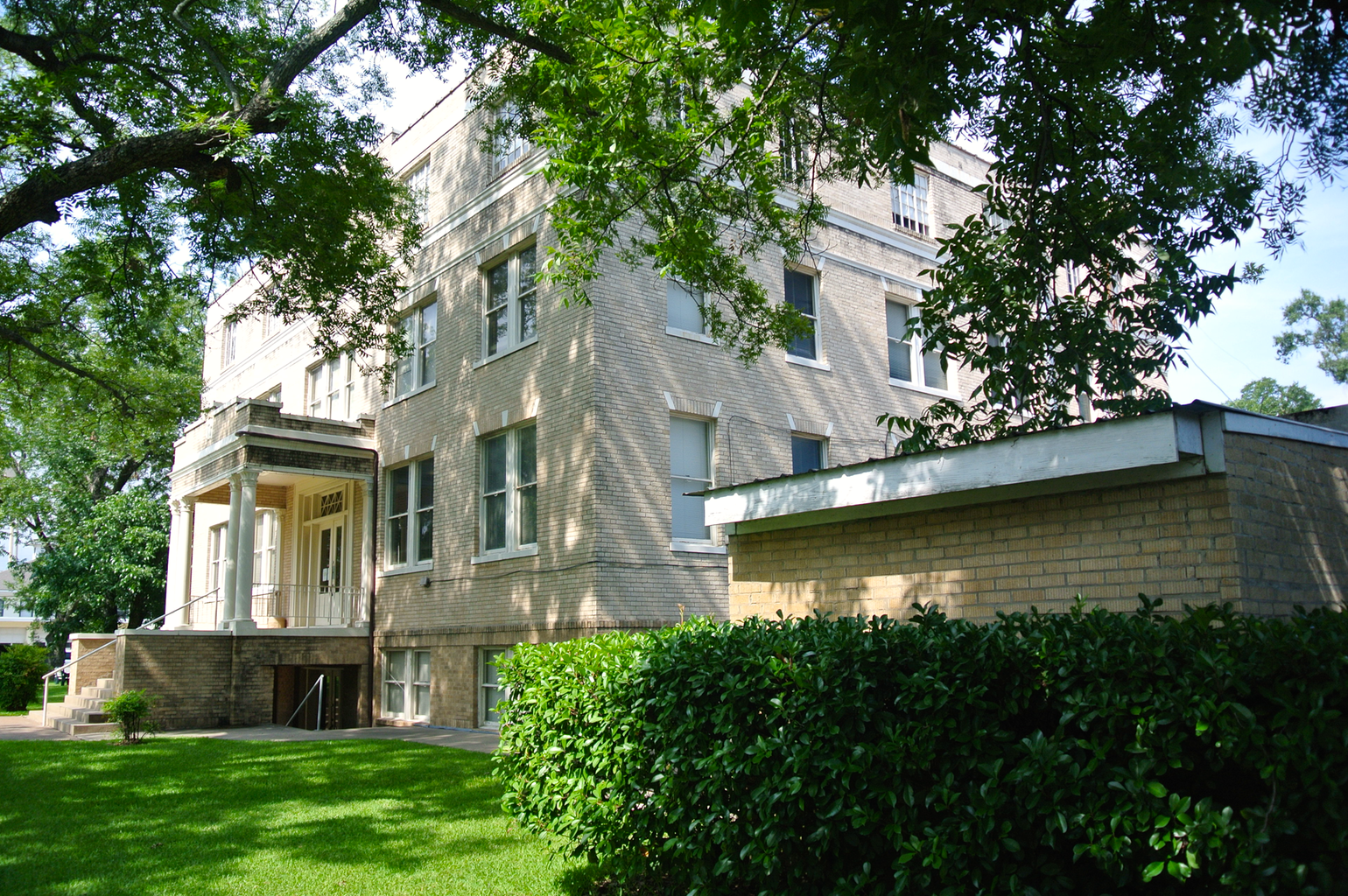 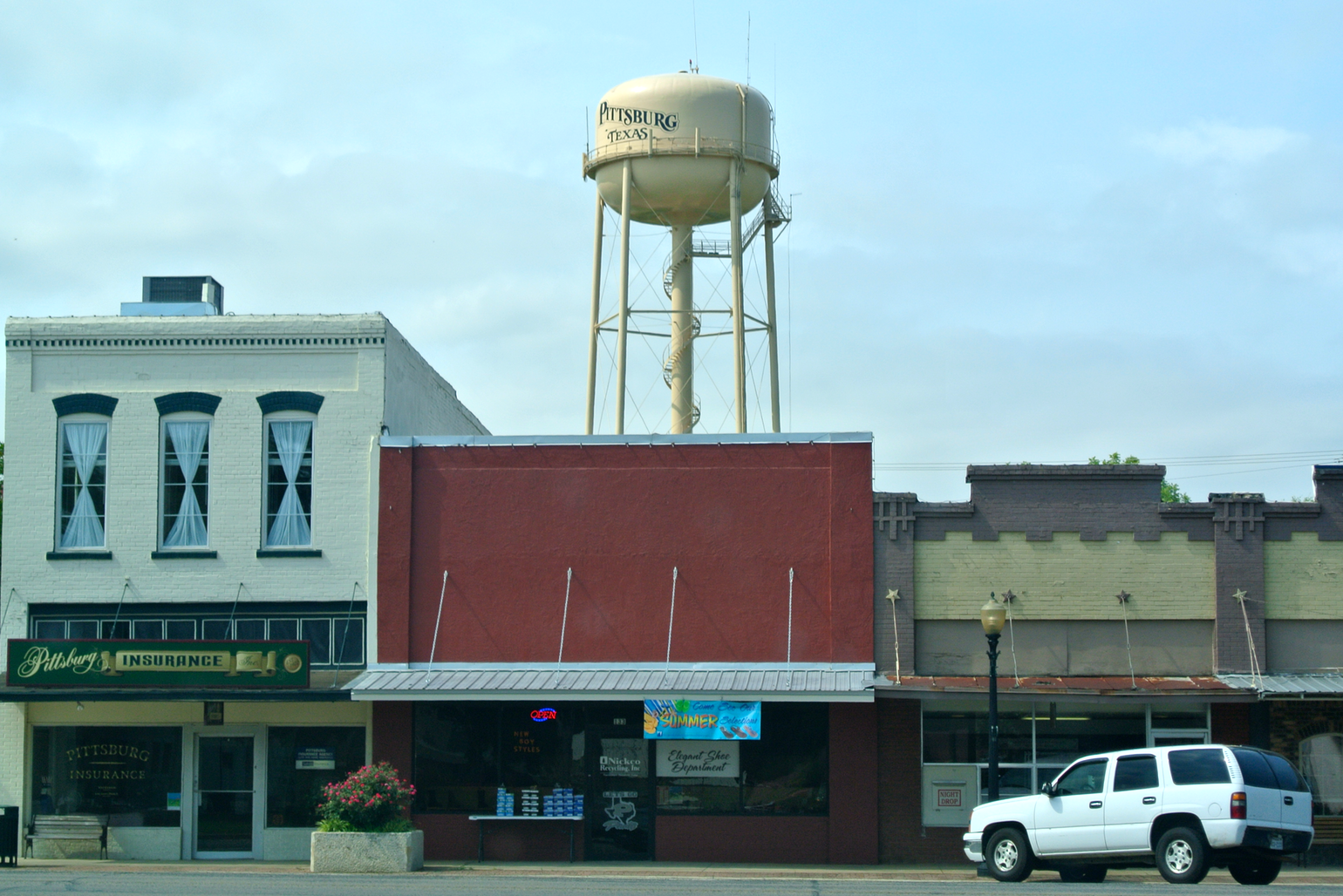 I’m really enamored by the city water tower. Check out those steps! 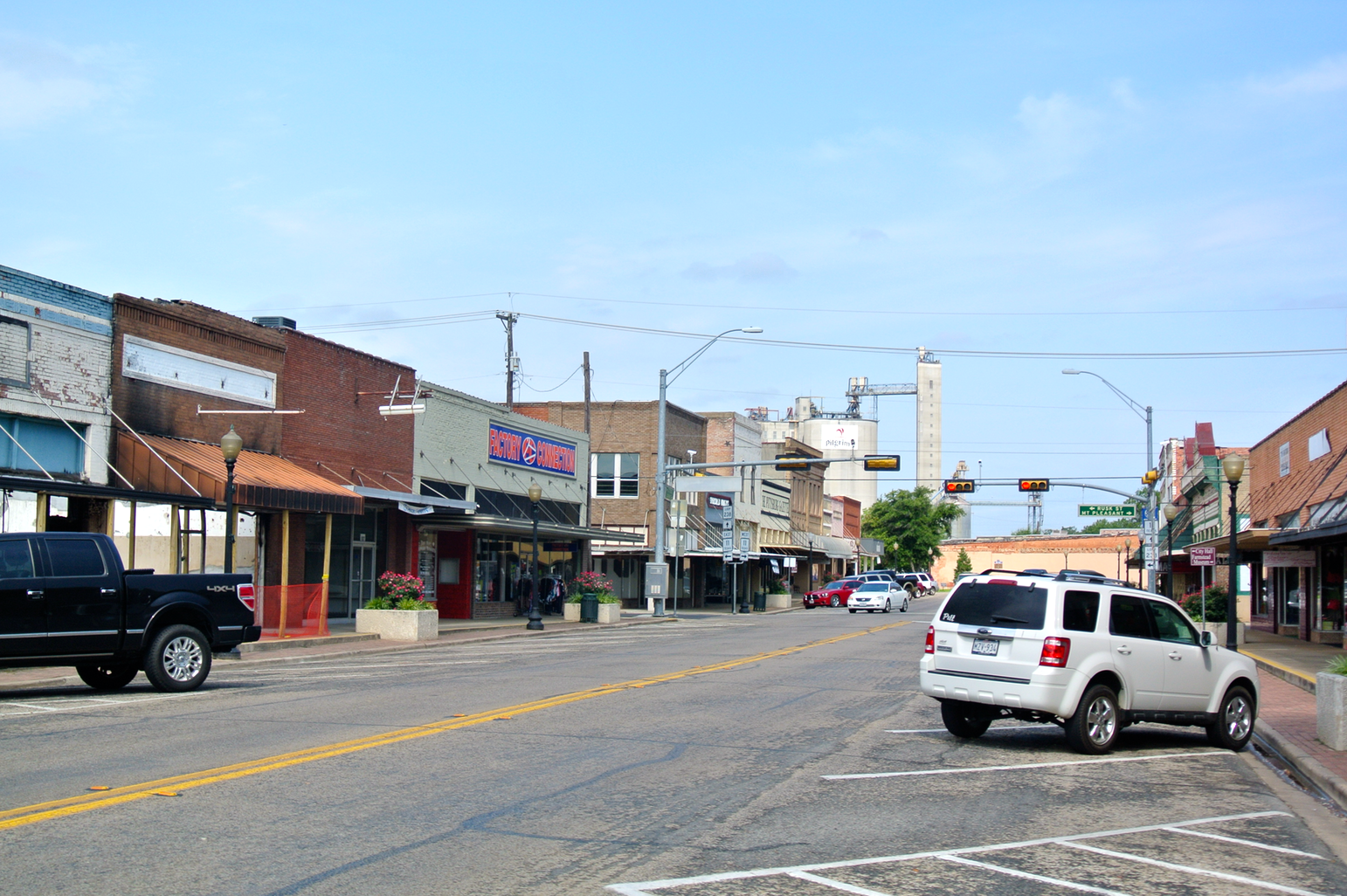 That grain facility you see at the end of the road is part of Pilgrim Industries, the biggest employer for Camp County citizens circa 1970 to 1980. I’m not sure if it retains that title today. 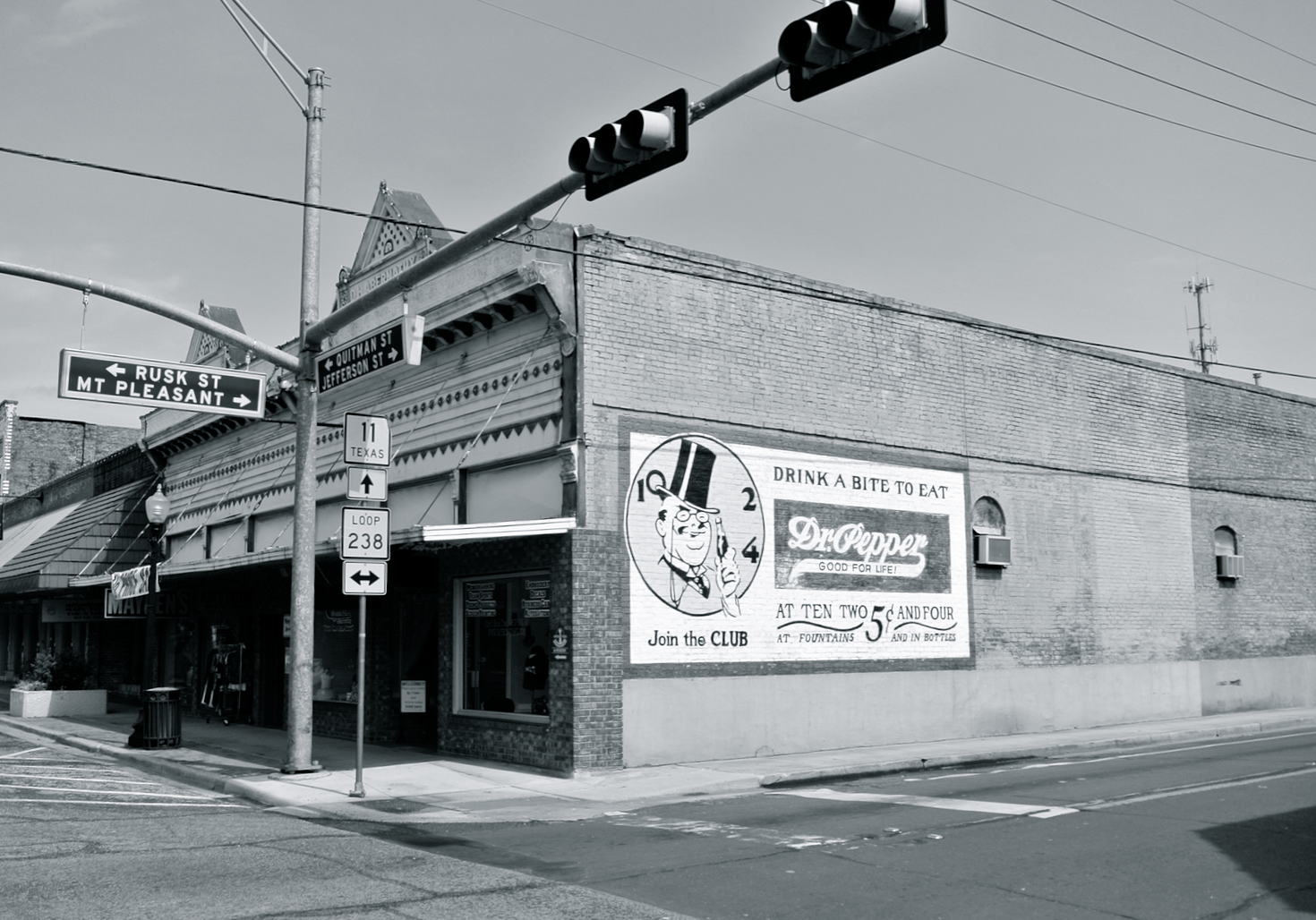