“Titus County comprises 412 square miles of the East Texas timberlands, an area that is heavily forested with a great variety of softwoods and hardwoods, especially pine, cypress, and oak. The terrain ranges from nearly level to rolling; most of the county is gently undulating to rolling. Elevation ranges from 250 to 450 feet above mean sea level.”

“During historic times, the earliest occupants of the county were the Caddo Indians, an agricultural people with a highly developed culture. During the 1820s and 1830s white settlements elsewhere in Texas prompted other Indians, such as Creeks, Choctaws, and Cherokees, to settle in the area. In the 1840s white settlers gradually displaced the Indians.”

“The earliest Anglo settler in what is now Titus County is said to have been Kendall Lewis, who moved into the county in 1835 with his wife, probably a Creek Indian. Lewis’s land grant, patented in February 1842, is said to have been the first land surveyed in the county. The family settled on Swauano Creek and remained in the county until problems with Indians caused the Lewises to leave the state in 1846.”

“During the early 1840s settlement of the area proceeded rapidly, and in 1846 the First Legislature of the state of Texas established Titus County, which included all of the territory of present-day Morris and Franklin counties. The county was named for Andrew Jackson Titus, an early Red River County settler. Mount Pleasant was established as the county seat.” 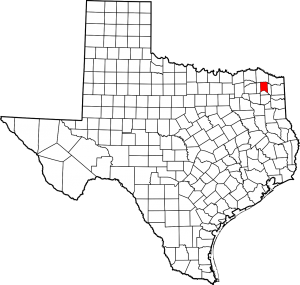 “In the election of 1860 an overwhelming majority of Titus County voters supported the states’ rights candidate, John C. Breckinridge of Kentucky. When the election was held for delegates to the Secession Convention, however, one of the men elected from Titus County was Joshua F. Johnson, one of only eight delegates who opposed secession. Vigorous in his opposition, Johnson signed the “Address to the People of Texas” which urged Texans to reject the secession amendment and may have campaigned against the ordinance in the Titus County area. Despite the efforts of Johnson and a few other unionists, Titus County voters approved secession by a vote of 411 to 285.”

“Reconstruction was difficult. Many of the county’s white citizens were discouraged and bitter. In 1867 a chaotic economic situation was made worse by the almost total failure of the cotton crop and a partial failure of the corn crop. Moreover, two companies of the Sixth United States Cavalry, under the command of Maj. Samuel Henry Starr, were stationed in Titus County in May of that year. … In November 1867 Gen. Joseph J. Reynolds had removed the county judge from office as an “impediment to Reconstruction” and replaced him with a military appointee. Over the course of the next three years two other positions, that of the sheriff and a commissioner, were filled by military appointment.”

“For more than seventy years after the Civil War, Titus County remained predominantly rural, with an economy based on agricultural products. The county’s dependence on agriculture was even more pronounced following the demarcation of Franklin and Morris counties in 1875, a move that reduced the county to its present size and boundaries. In 1870 Titus County had a population of 11,339 and twenty manufacturing establishments that employed ninety-seven workers. Some manufacturing establishments were located near the rich iron ore deposits in the area that would become Morris County.”

“The Tyler Tap Railroad crossed the county in 1878. The East Line and Red River had built across the southeast corner in 1876. In 1913 an independent line, the Paris and Mount Pleasant, was completed.”

“Within the almost exclusively agricultural economy of the county, cotton and corn were the principal products. From the end of the Civil War through the Great Depression of the 1930s, every census recorded that from just under two-thirds to more than 90 percent of the land in the county planted in crops was planted in corn and cotton. Cotton and corn remained the principal crops in the county until the 1950s, when Titus County farmers generally abandoned staple crops for an agriculture heavily based on livestock and livestock products.”

“Although the programs of the New Deal did help to ameliorate the worst effects of the [Great] depression, local developments seemed to hold the promise of a fuller recovery. Construction of a milk-processing plant had begun in Mount Pleasant in the summer of 1929, and the completion of the plant provided owners of dairy cattle a market. Many of the county’s farmers could afford few or no dairy cows, but more prosperous farmers could, and the number of milk cows in the county rose from 4,800 in 1930 to 6,740 in 1940.”

“In 1960 the milk processing plant in Mount Pleasant closed, and in 1982, although there were 1,196 dairy cattle in the county, the most important agricultural products were beef and poultry, particularly broilers. The opportunities in the county’s towns and in the changing agricultural economy were important, but other areas of the state and nation seemed to many to offer better opportunities. For thirty years after 1940, each census recorded a gradual decline in population.” 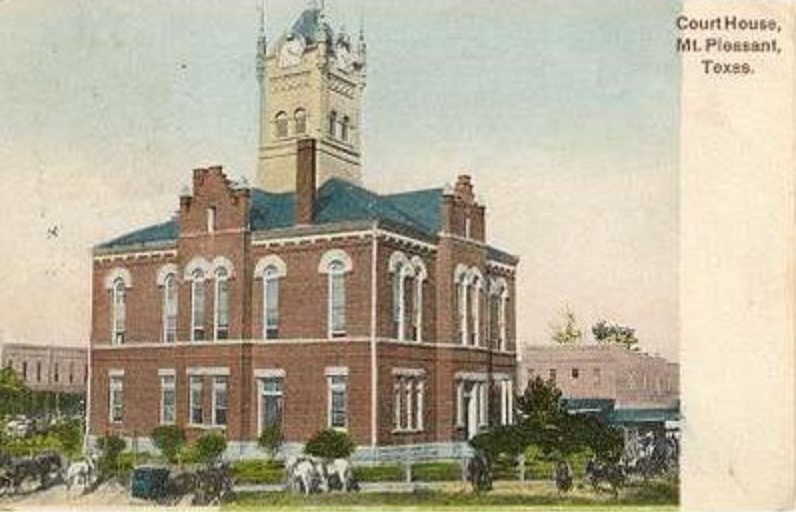 Interestingly enough, this building still stands. However, what you’ll find on the Mount Pleasant square today looks nothing like it. Three major renovations have occurred to this building since it was constructed, resulting in a modern shell largely devoid of character.

This first version was designed in the Italianate style by F.B. & W.S. Hull. The contractor was J.A. Wilson & Co. 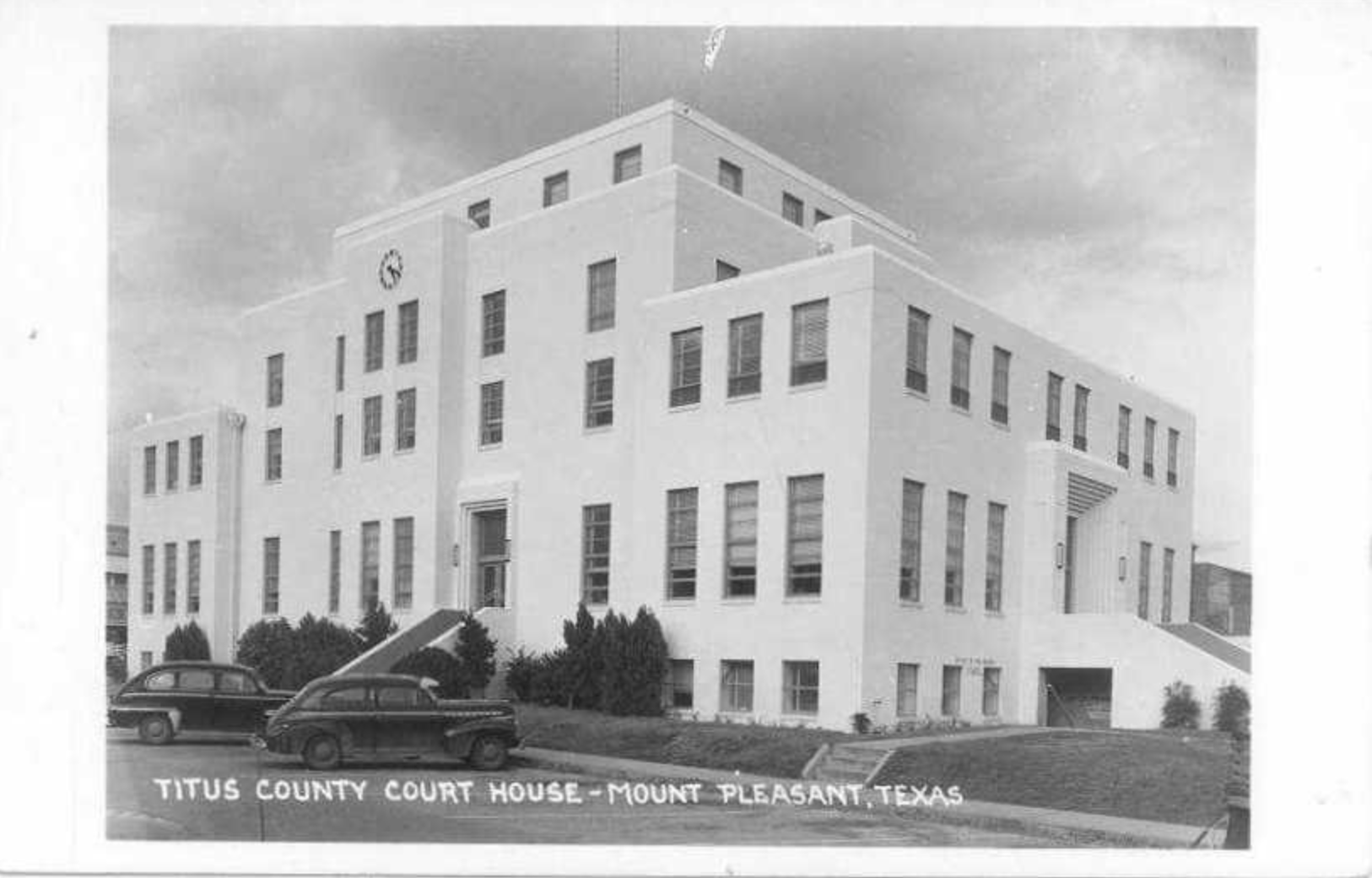 In 1940, the tower was removed at the start of a long chain of changes. Flanking additions were added, and the exterior and interior were applied with the Art-Deco style of the day, This completely transformed the original structure. 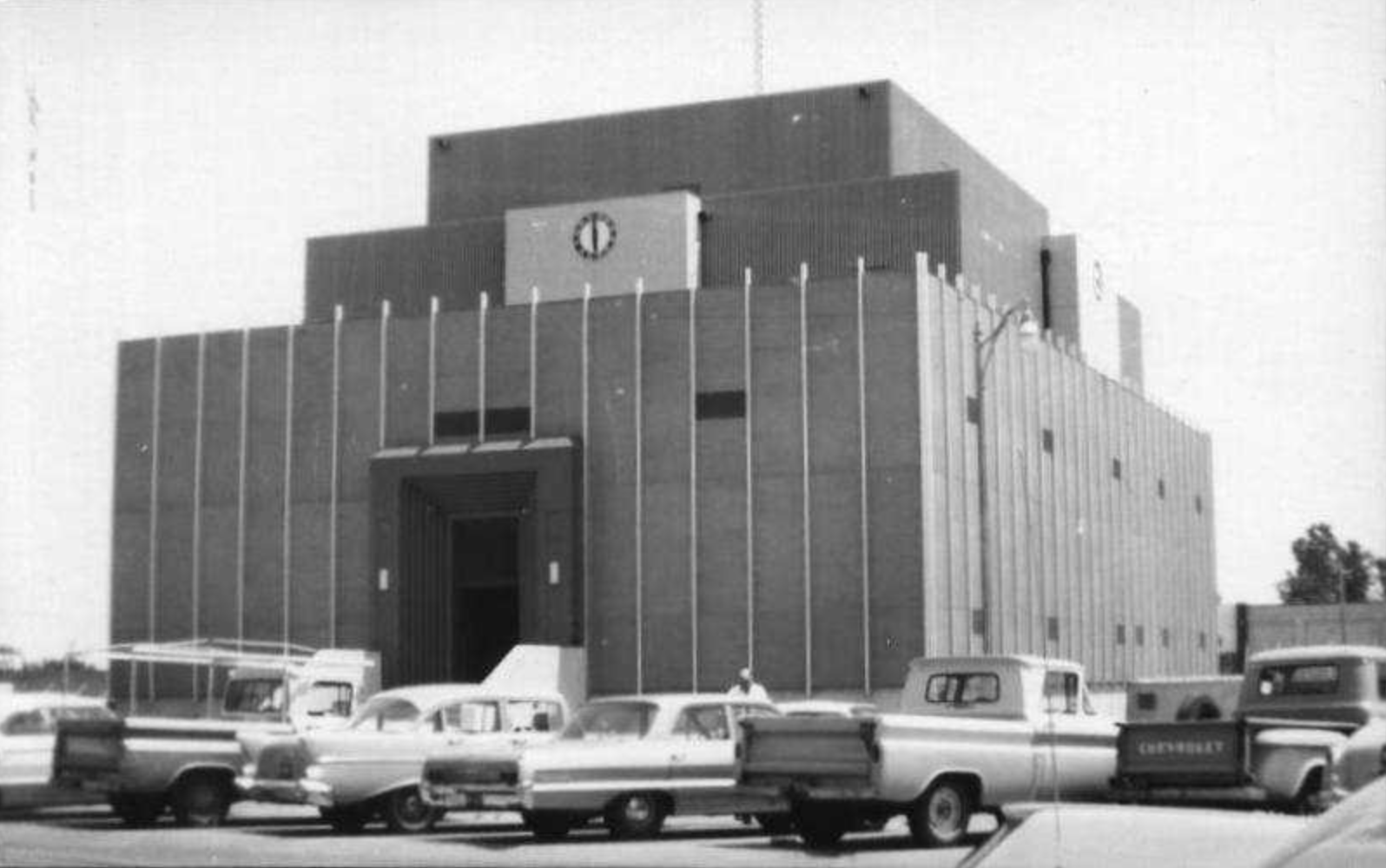 In 1962, Titus County made a pretty horrific decision to sheathe the entire courthouse in metal.The resultant catastrophe stood for nearly thirty years, and was dubbed the “ugliest courthouse in the state” by many (including the county’s own residents). I have to heartily agree. 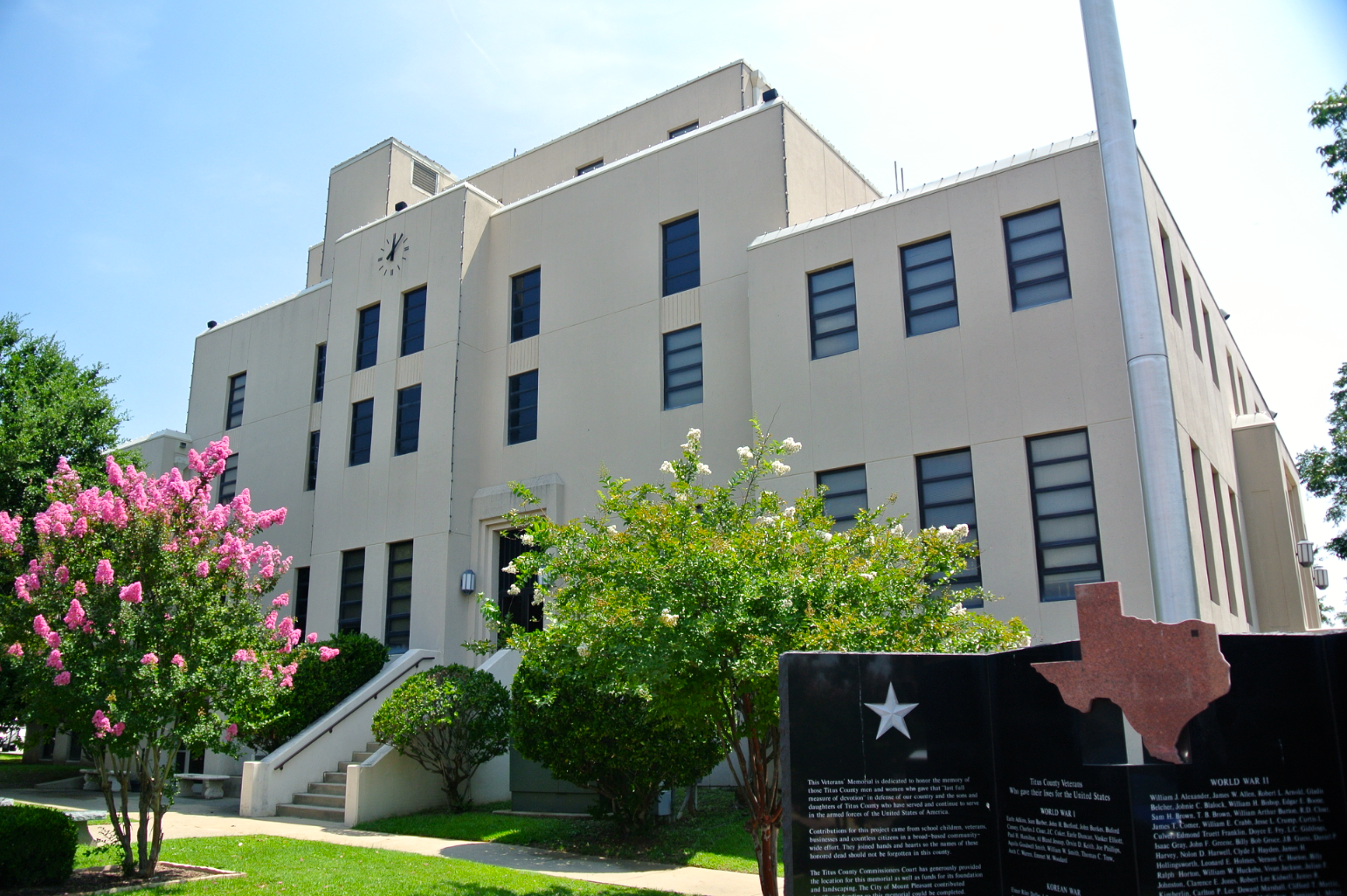 Thankfully, in the early 90s, the county did away with the metal casing and replaced it with a “dry-vet stucco”. This is how it looks today.

It’s miles better than the 60s version, but nothing close to being “beautiful”, if you ask me. 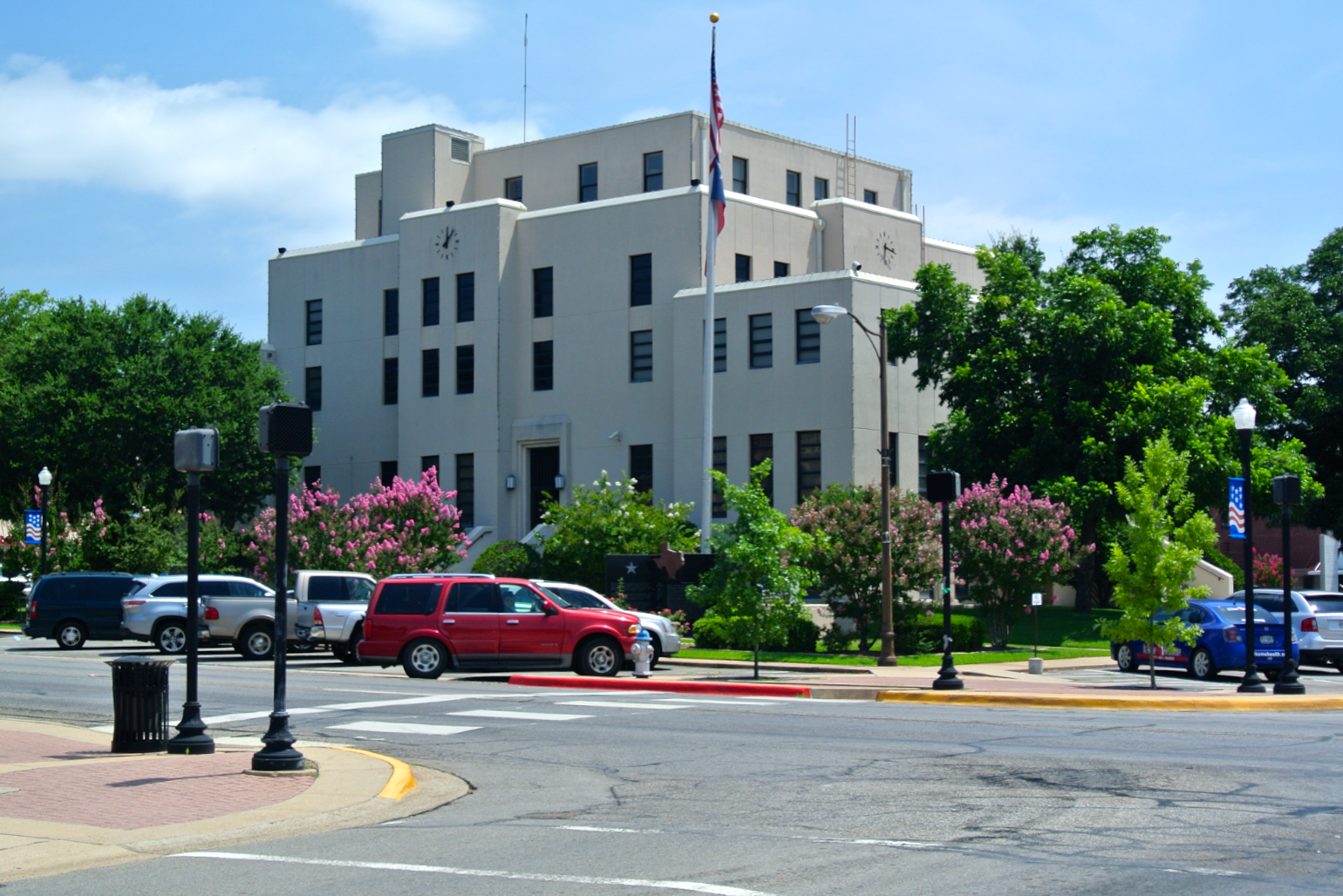 The southwest corner, at Madison and 1st 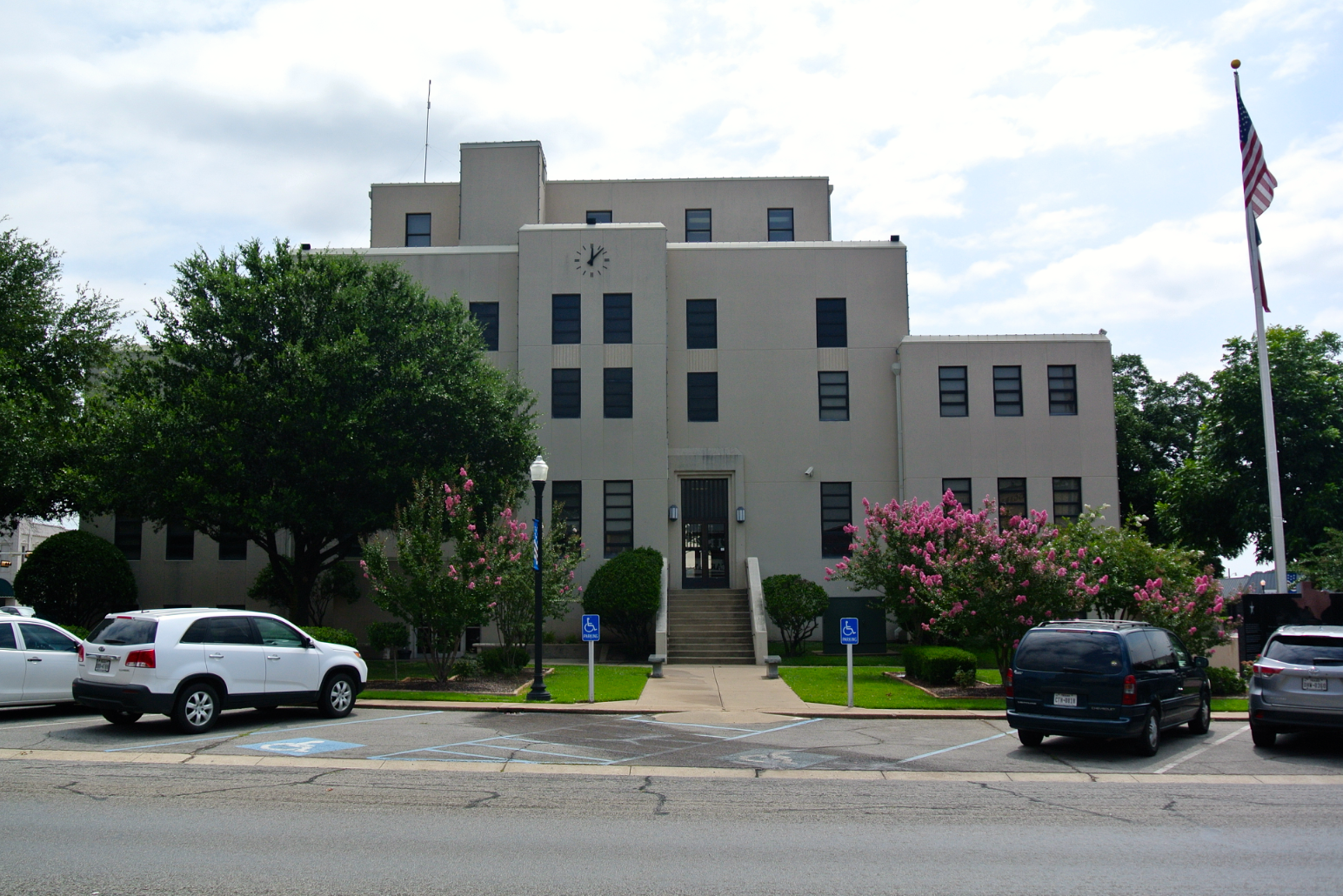 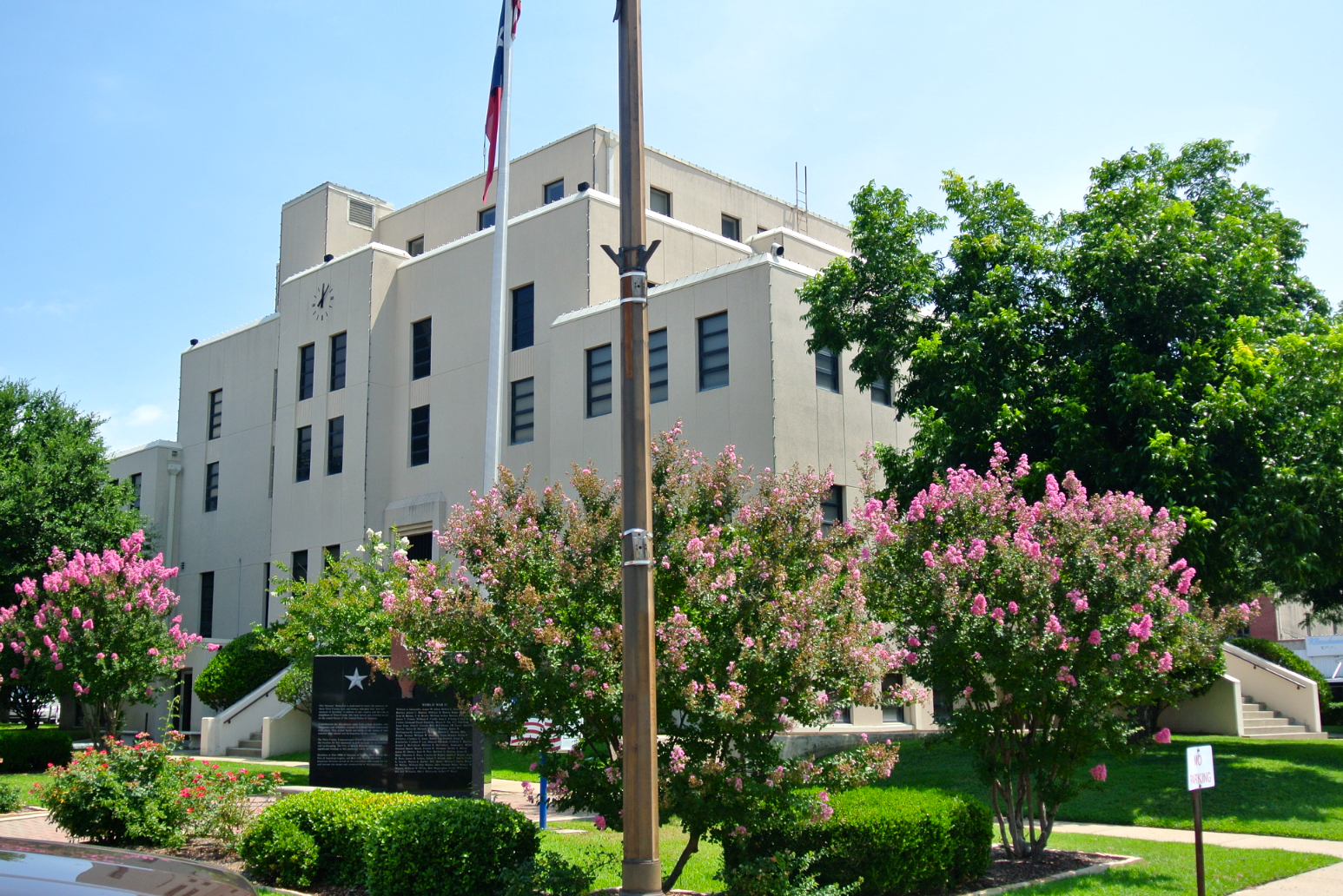 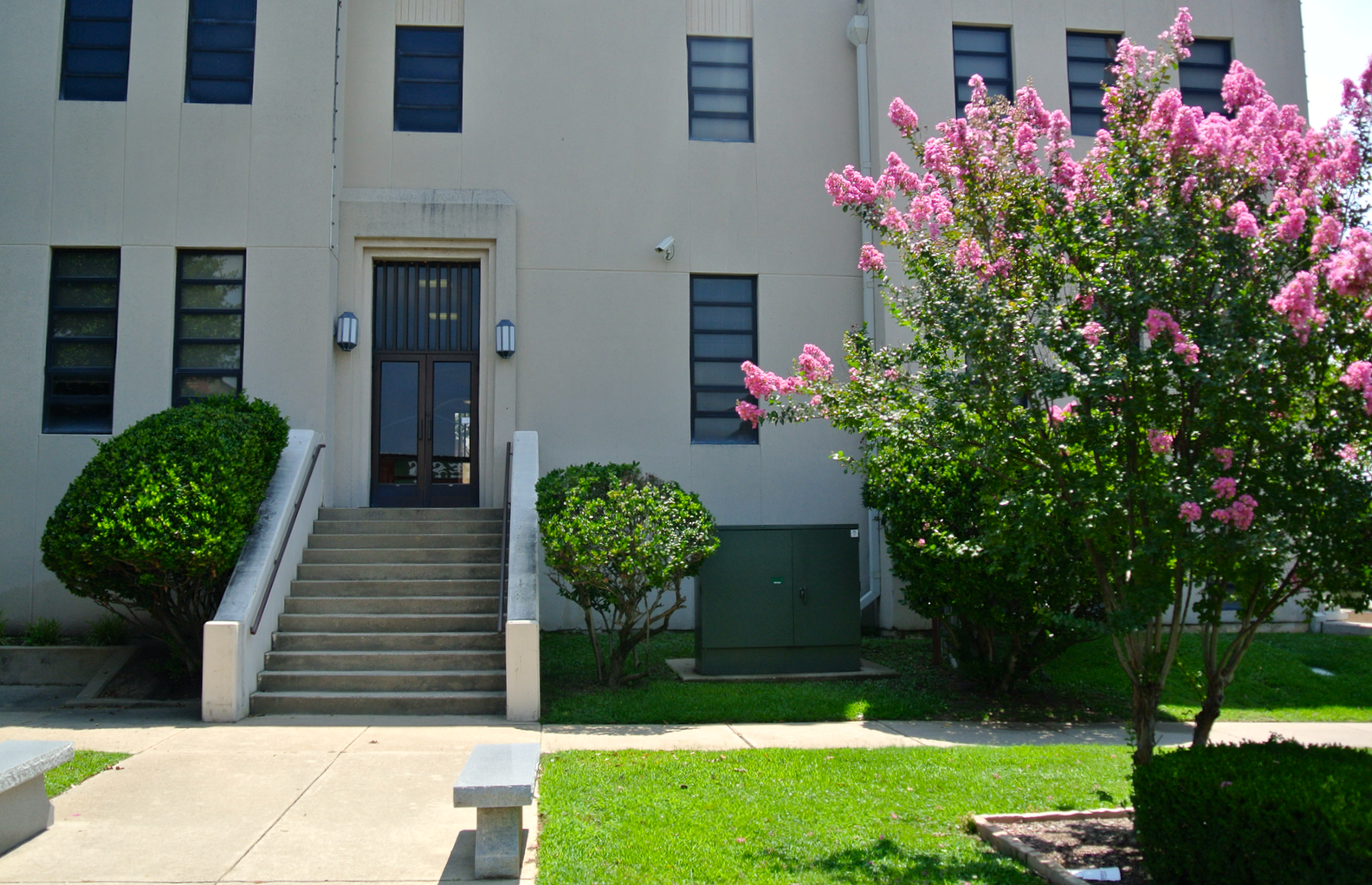 The western side features an interesting, exterior-accesible elevator shaft. 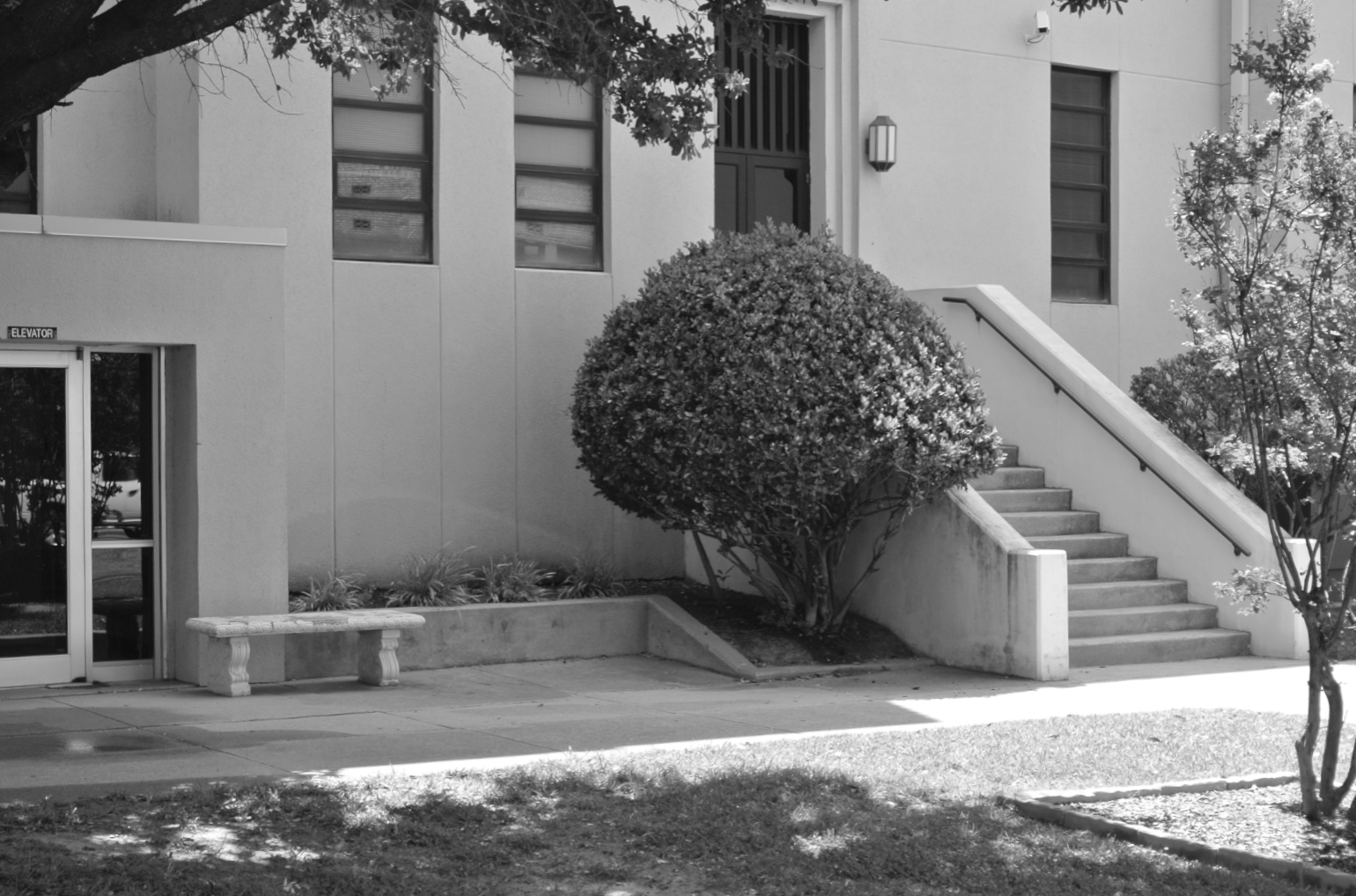 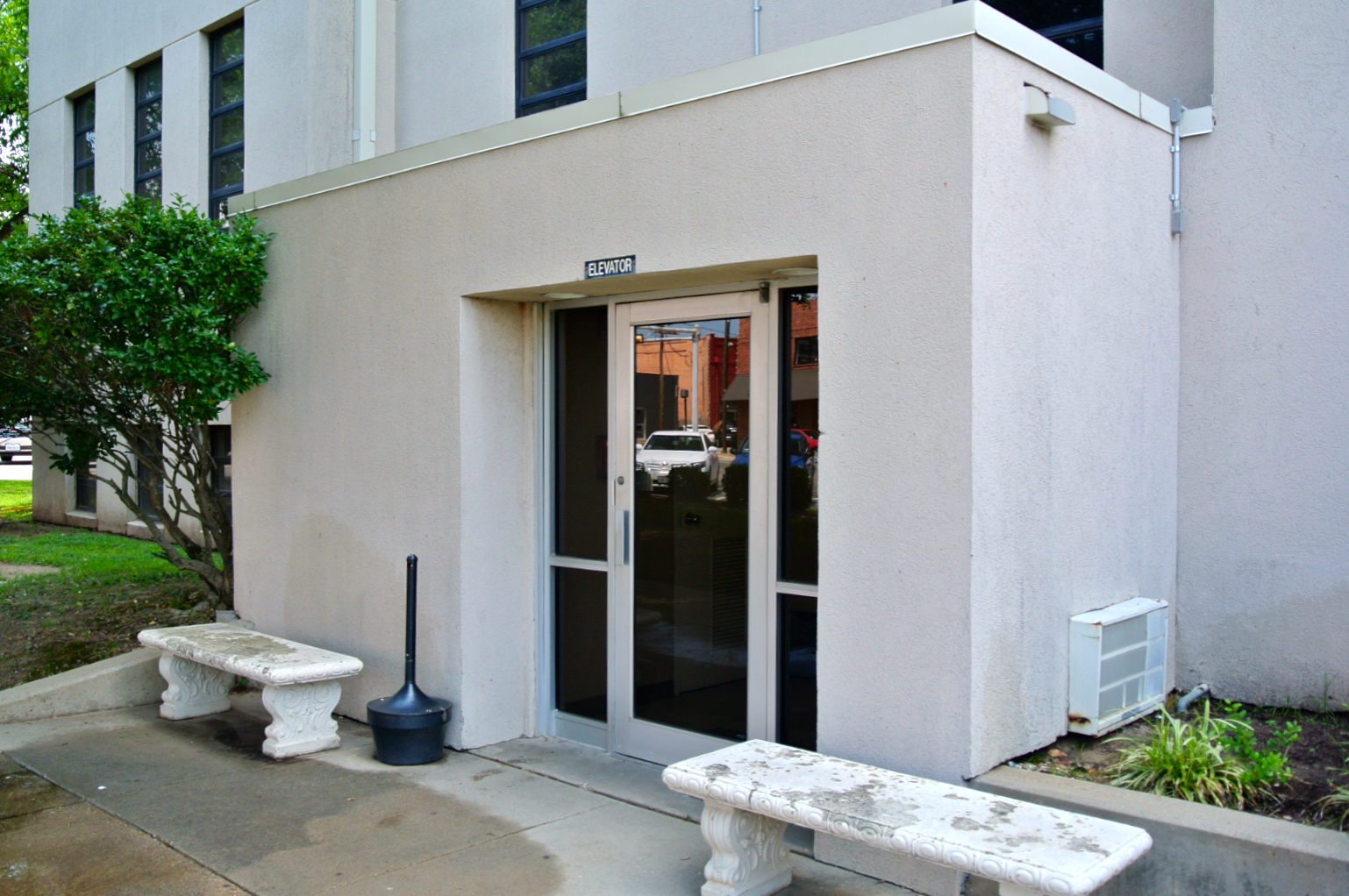 The elevator provides speedy access to the second floor courtroom. 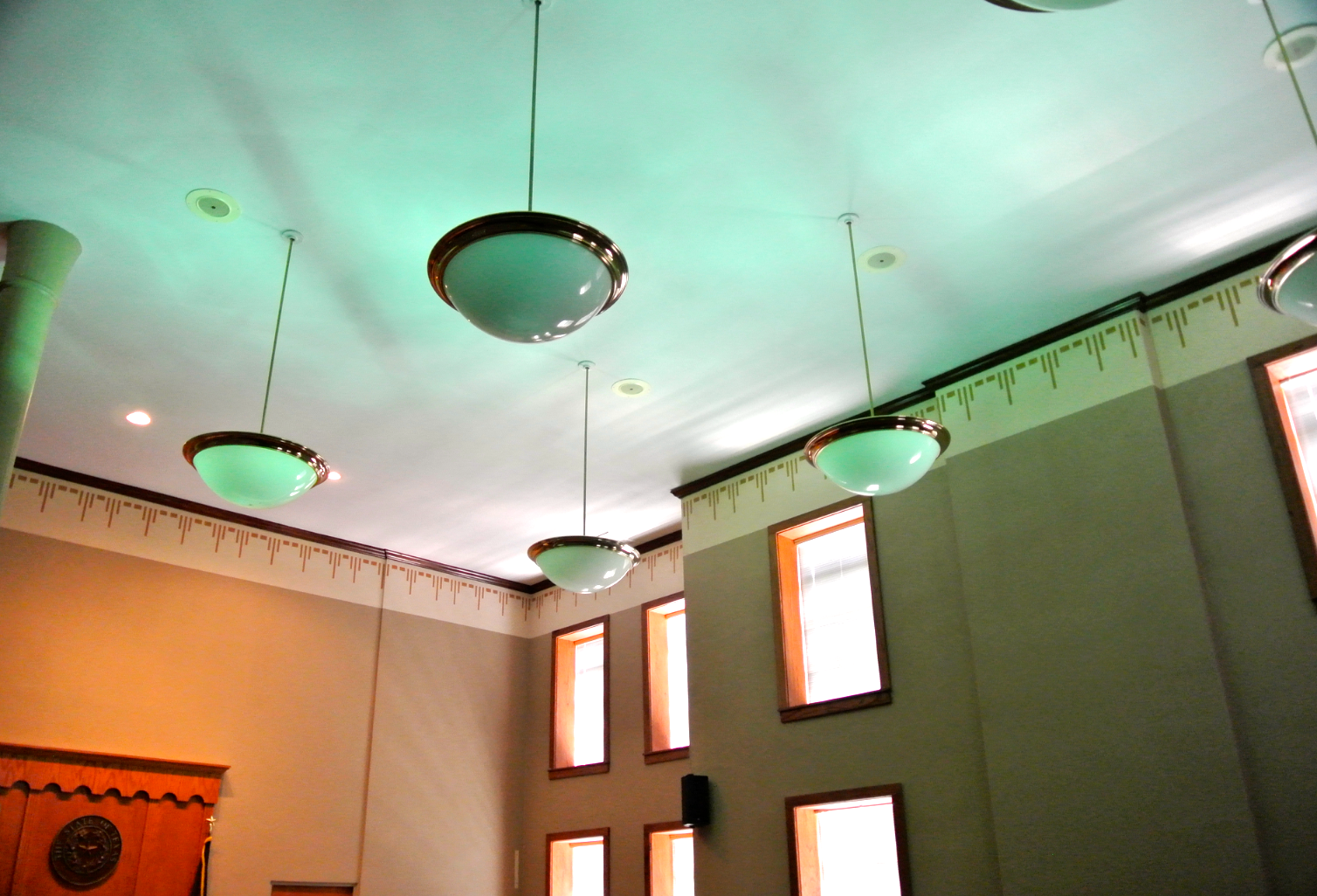 The light fixtures and designs on the wall trim remind one that this building was built in the Art-Deco era. 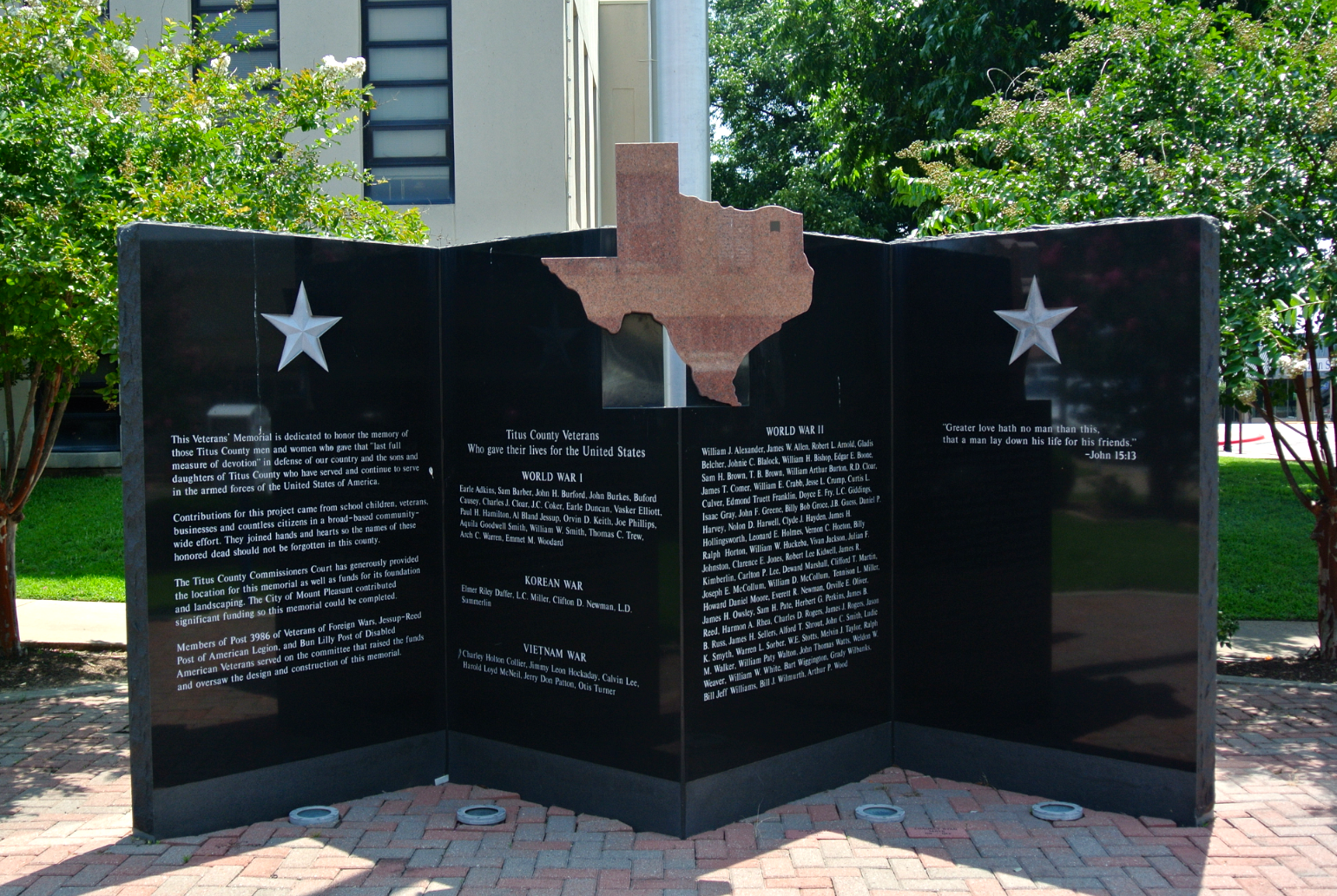 A county veterans memorial stands proudly near the western entrance. 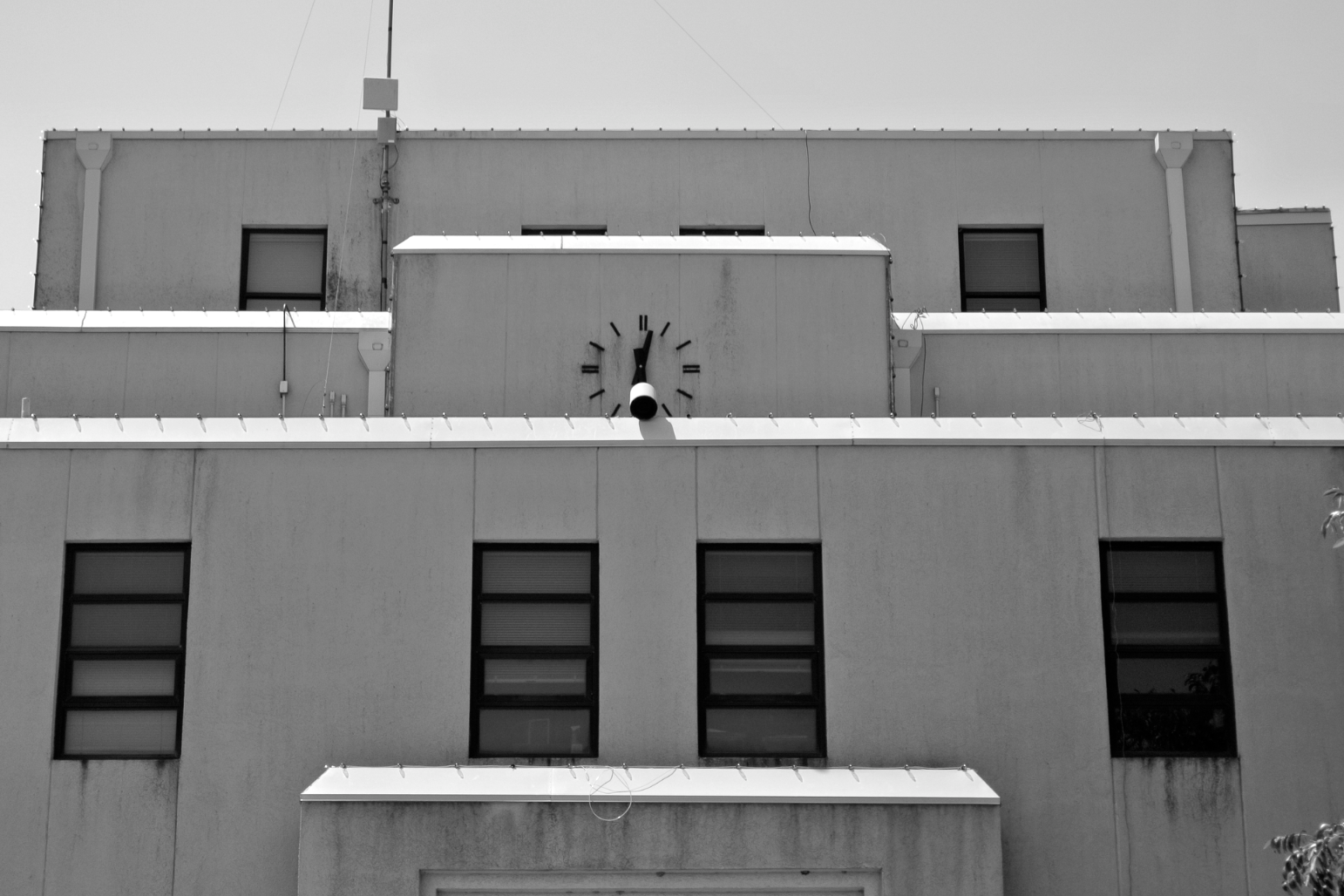 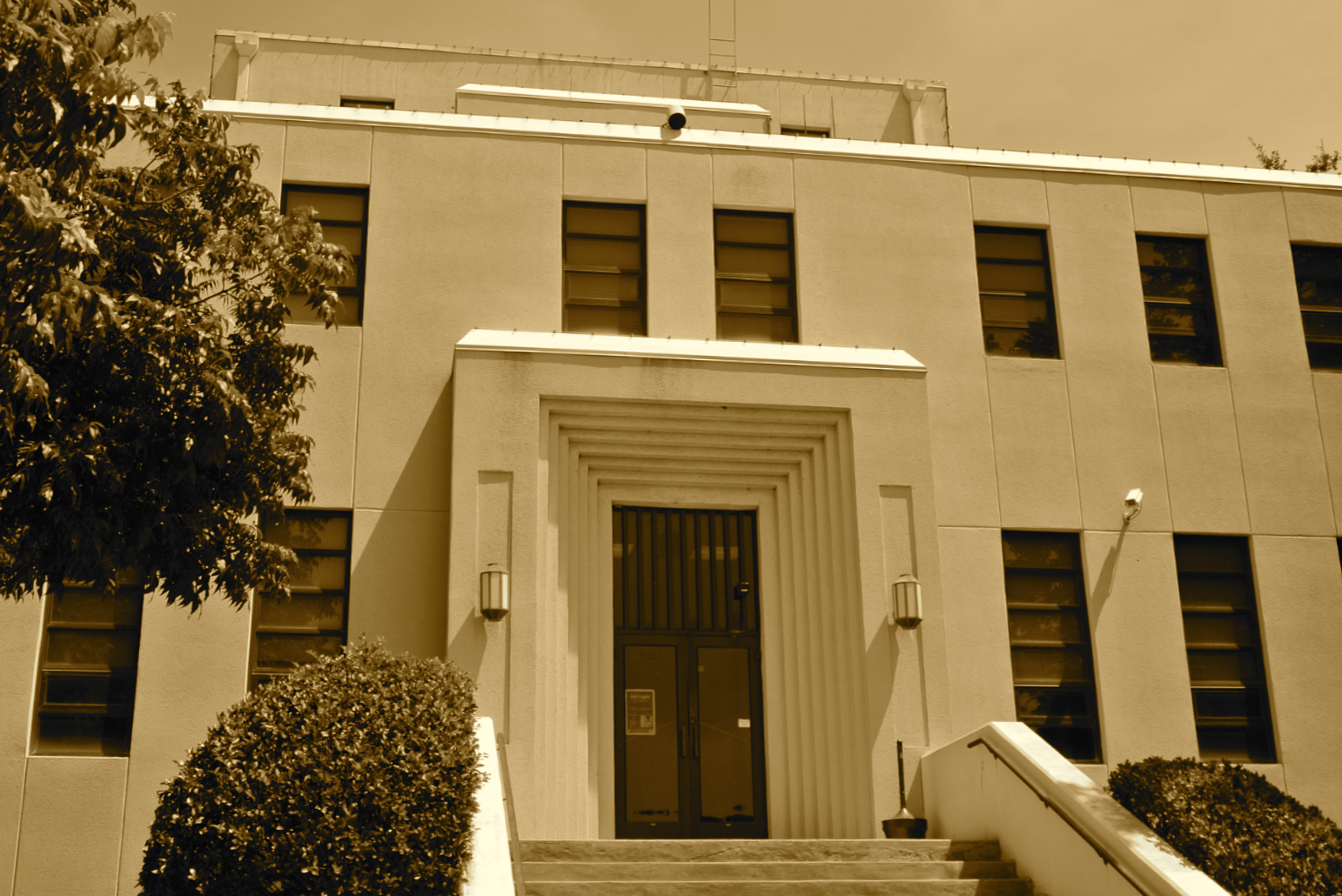 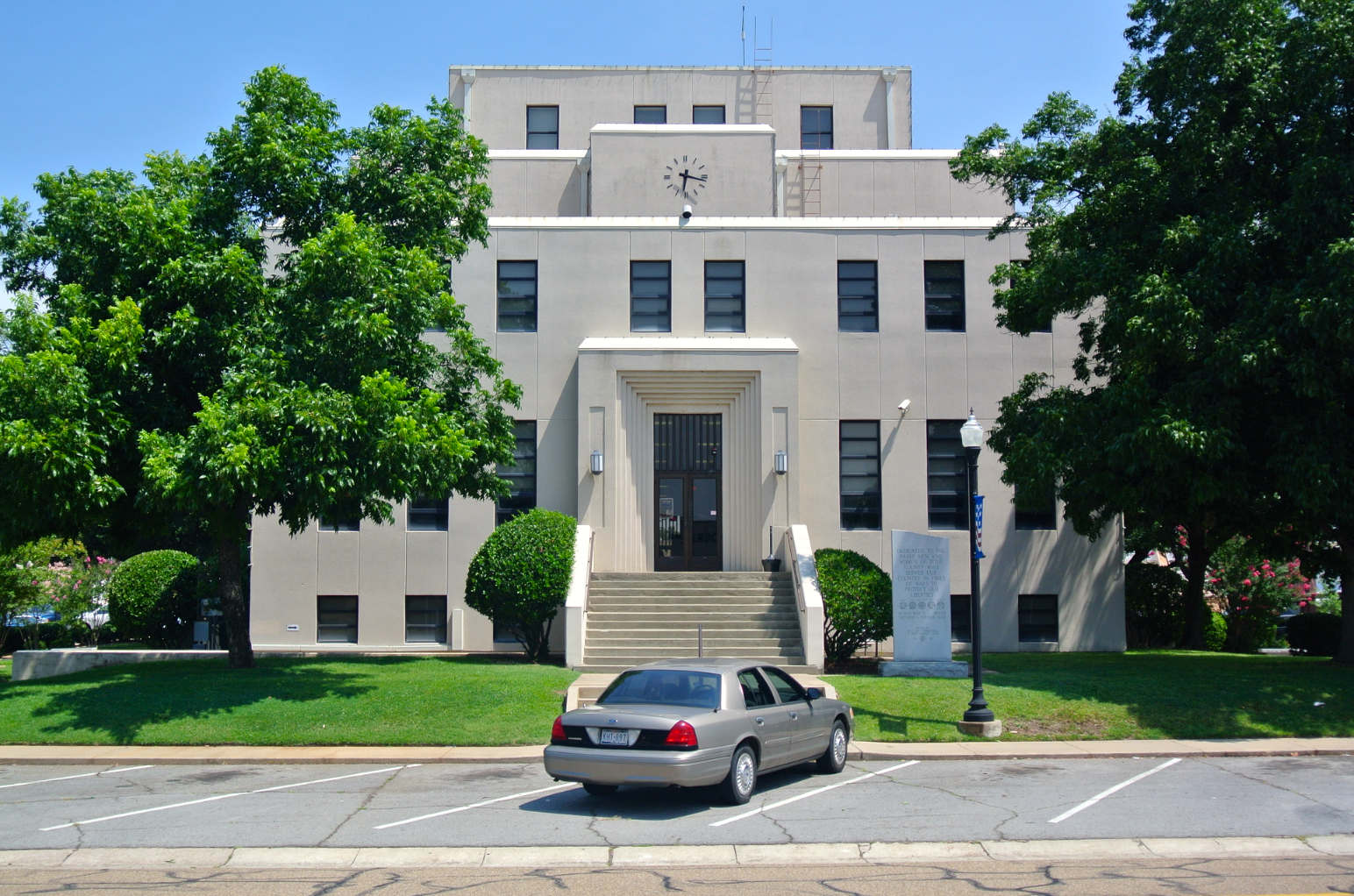 The southern entrance, on 1st Street 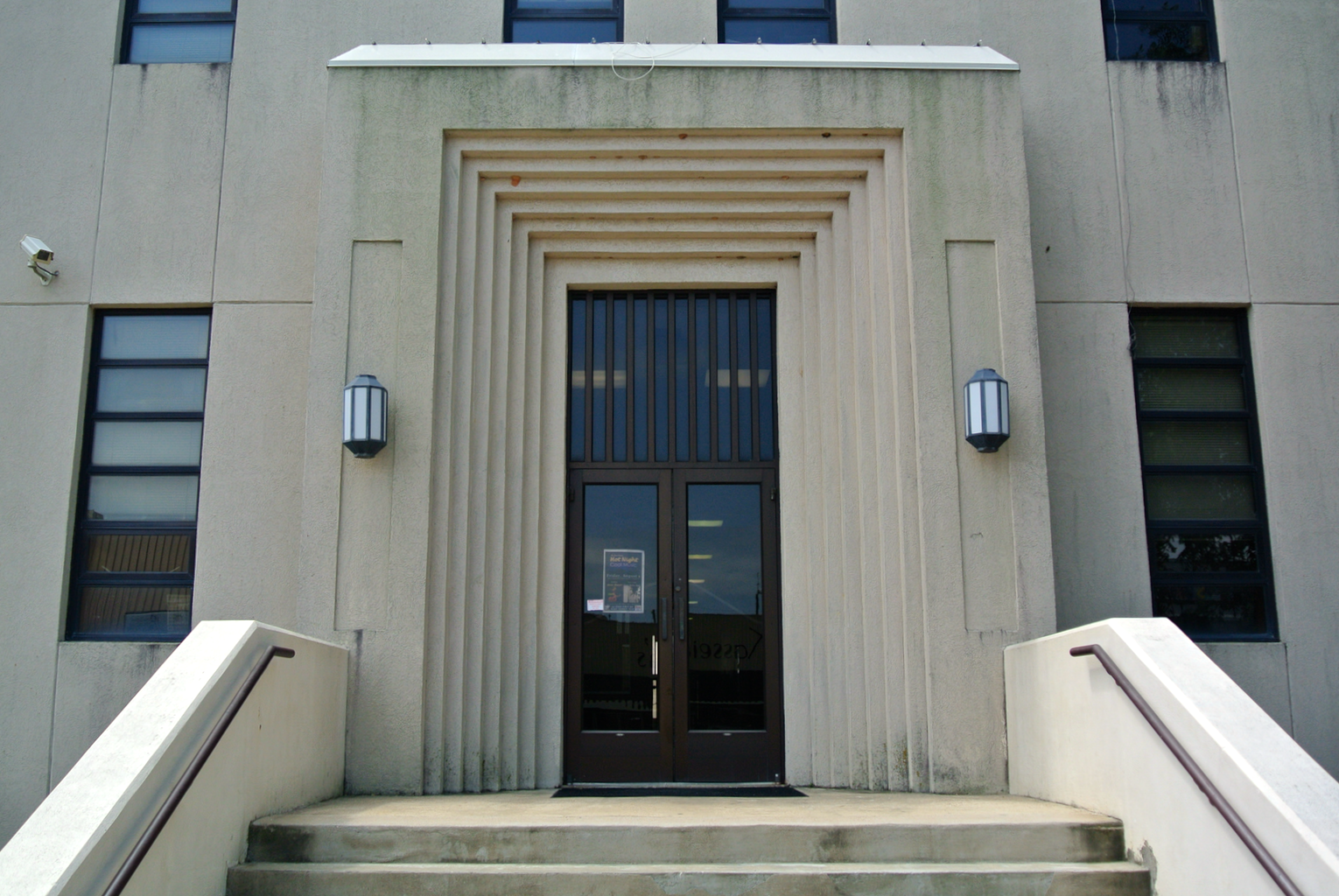 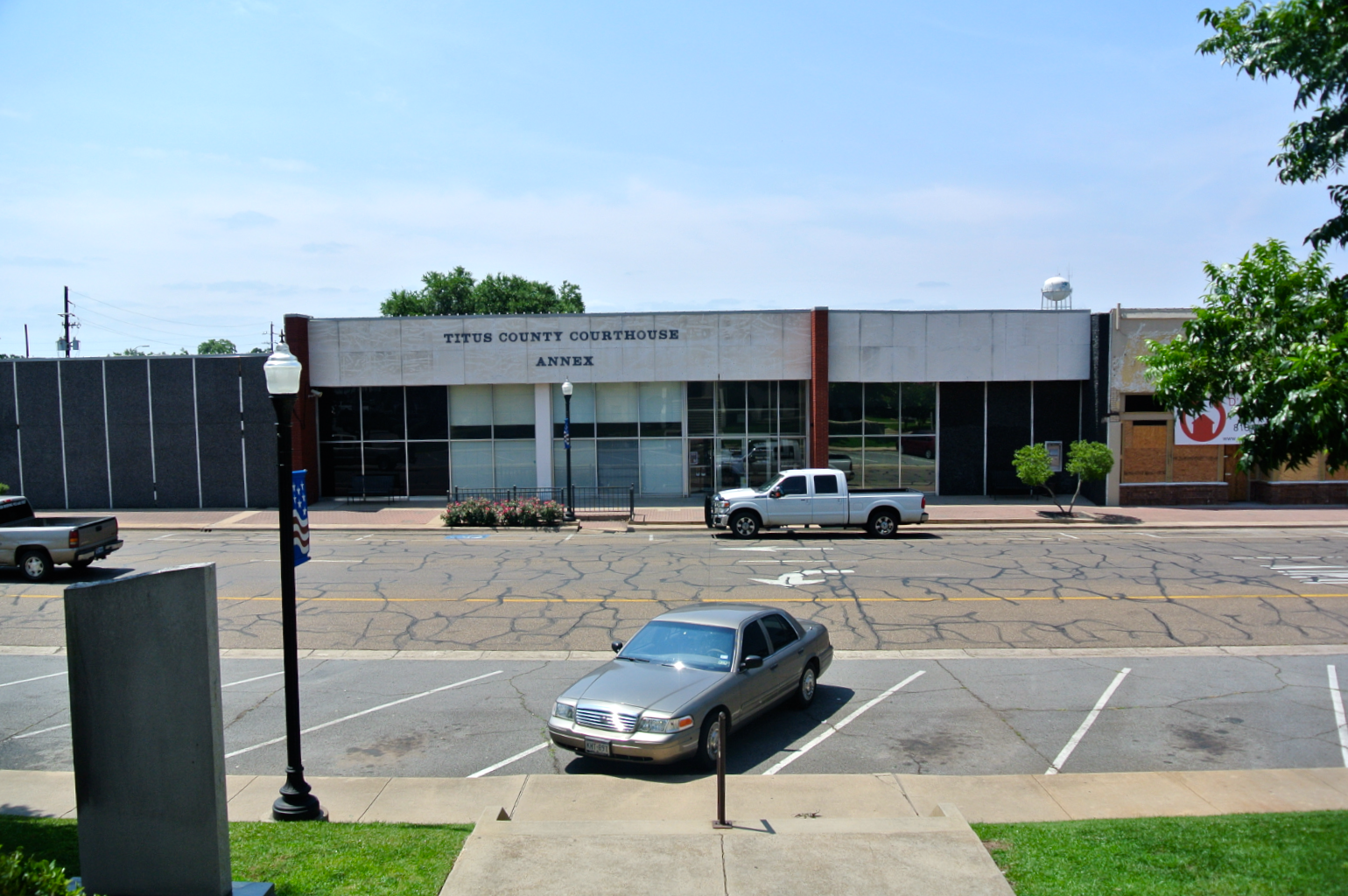 You can spot the courthouse annex from those doors. 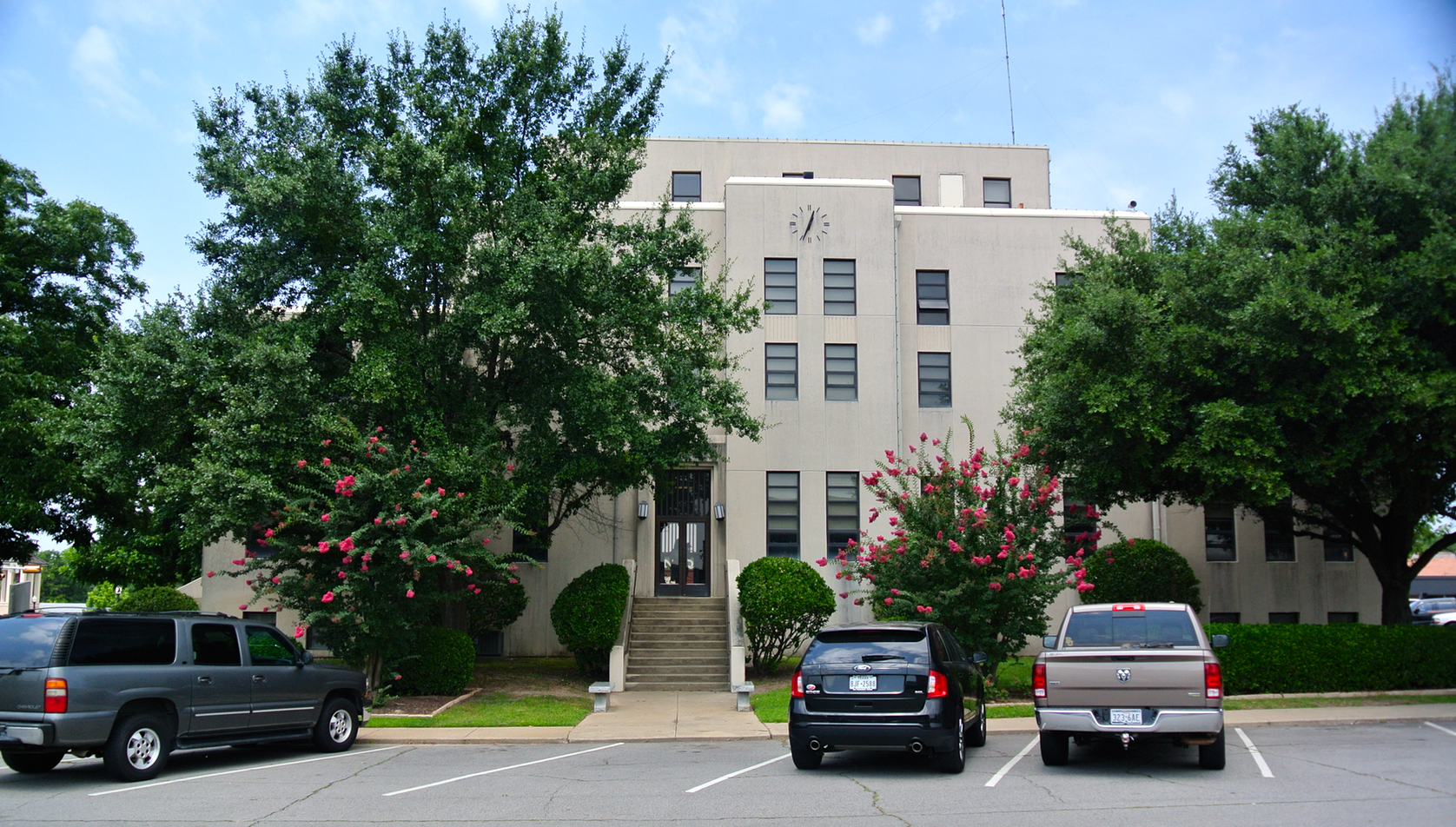 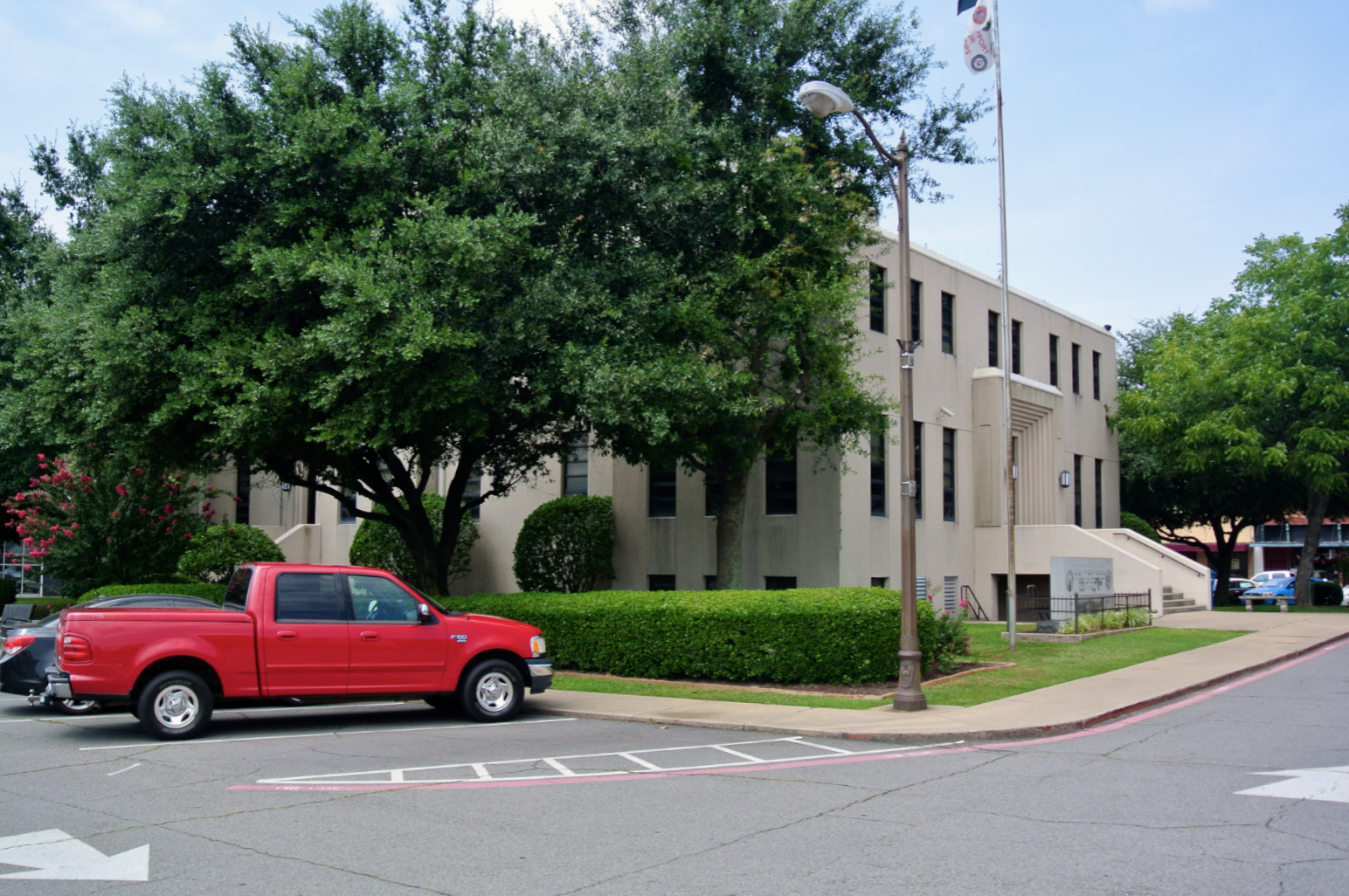 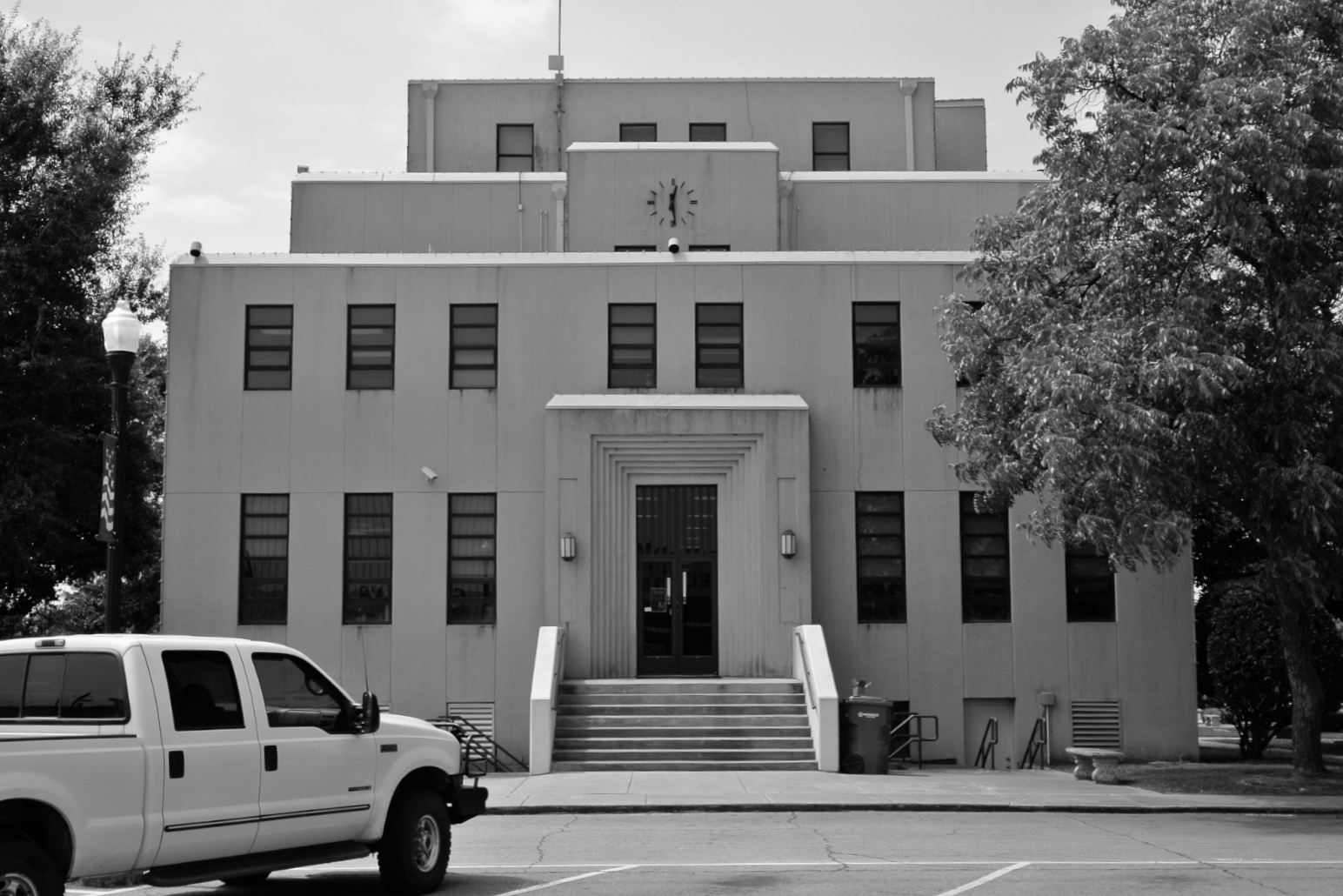 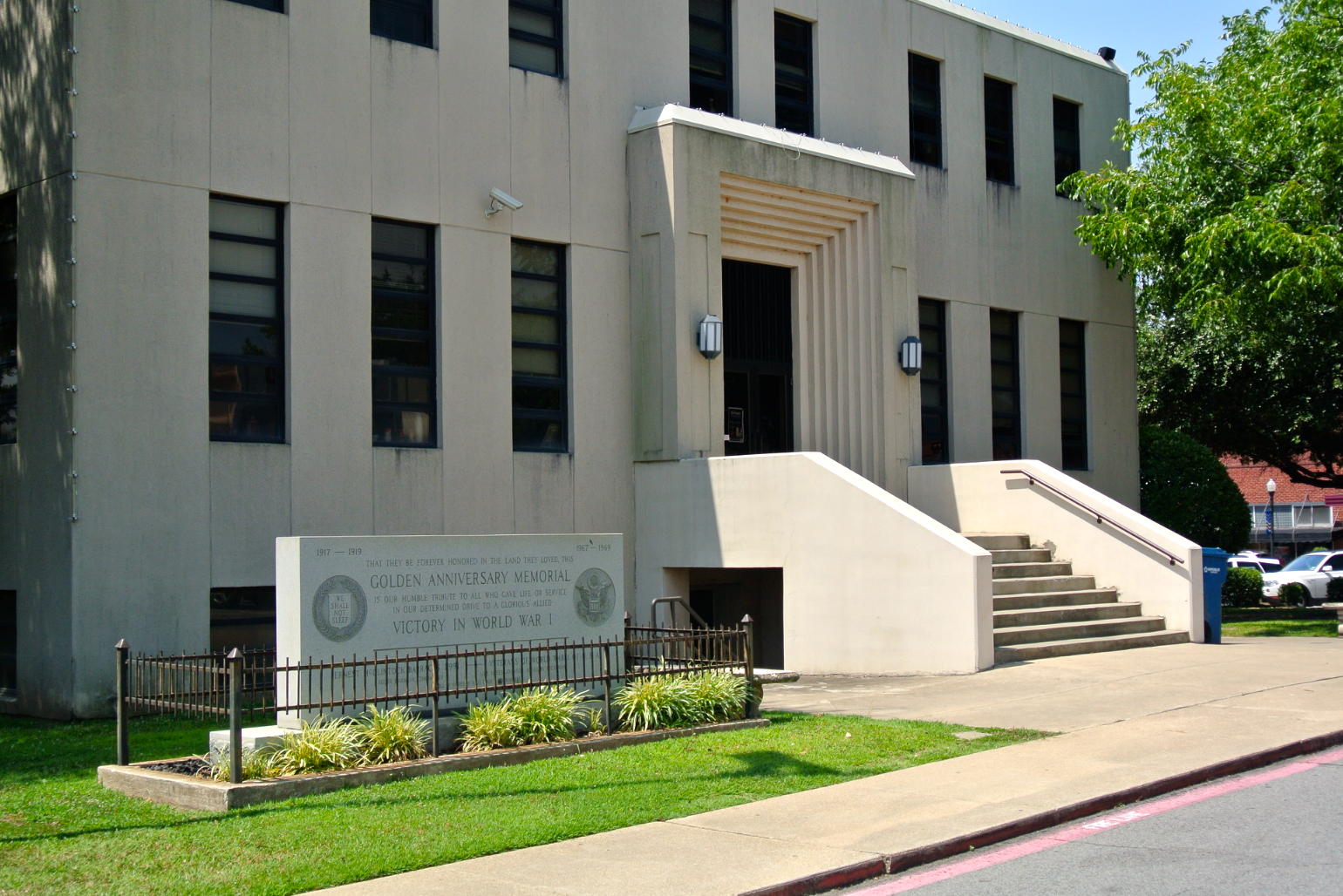 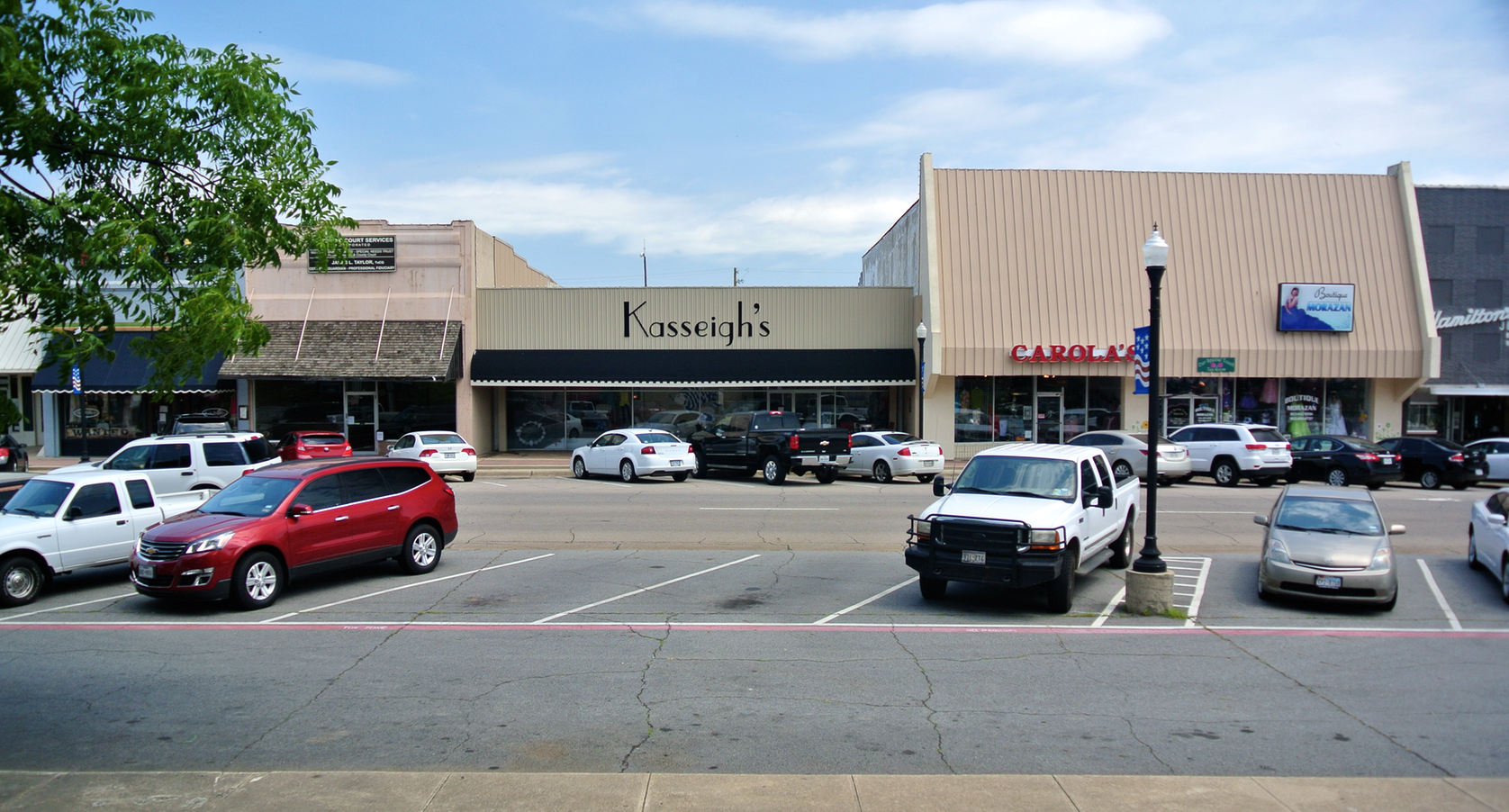 2nd Street, as seen from the northern entrance 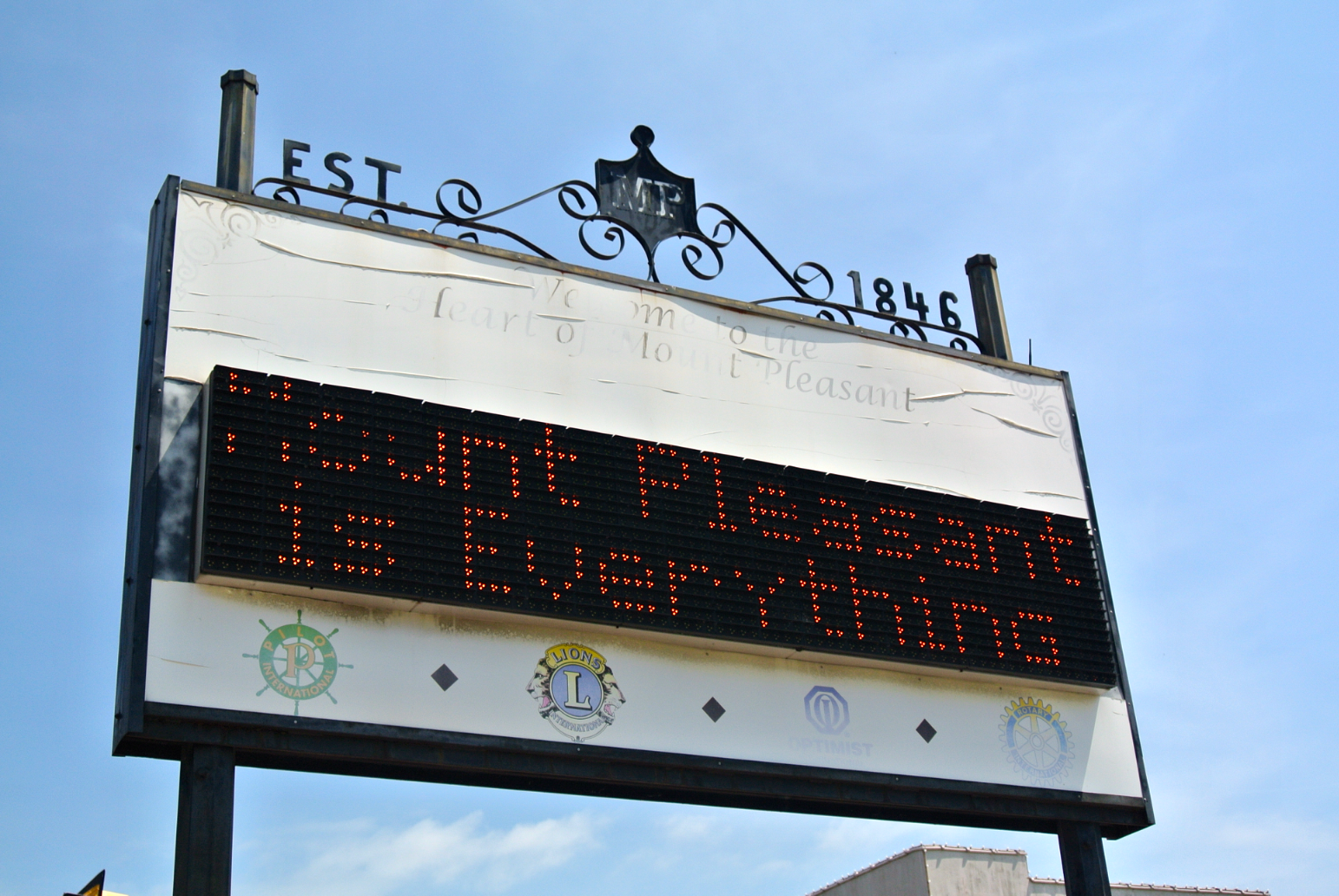 Yes, but its courthouse isn’t… 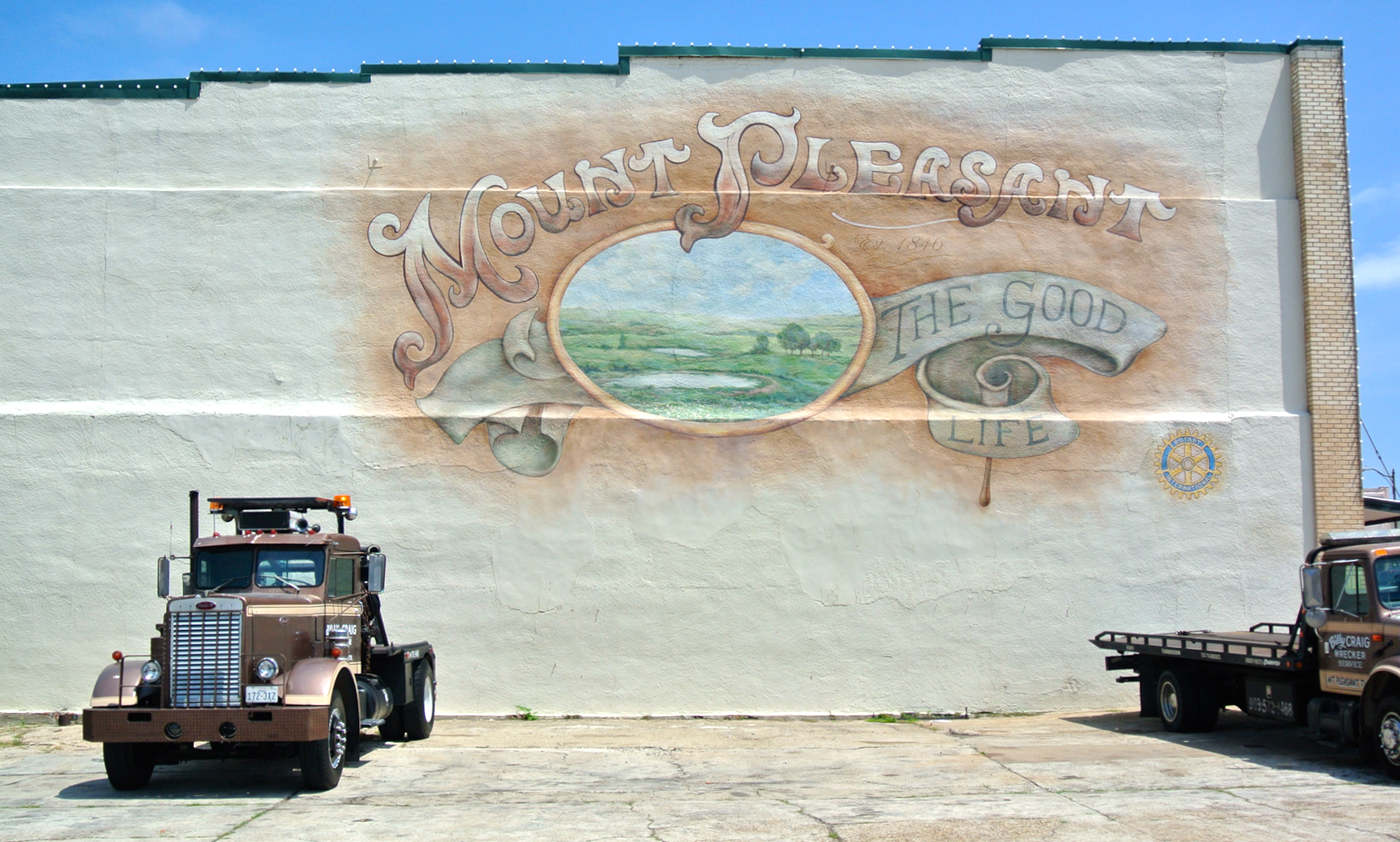 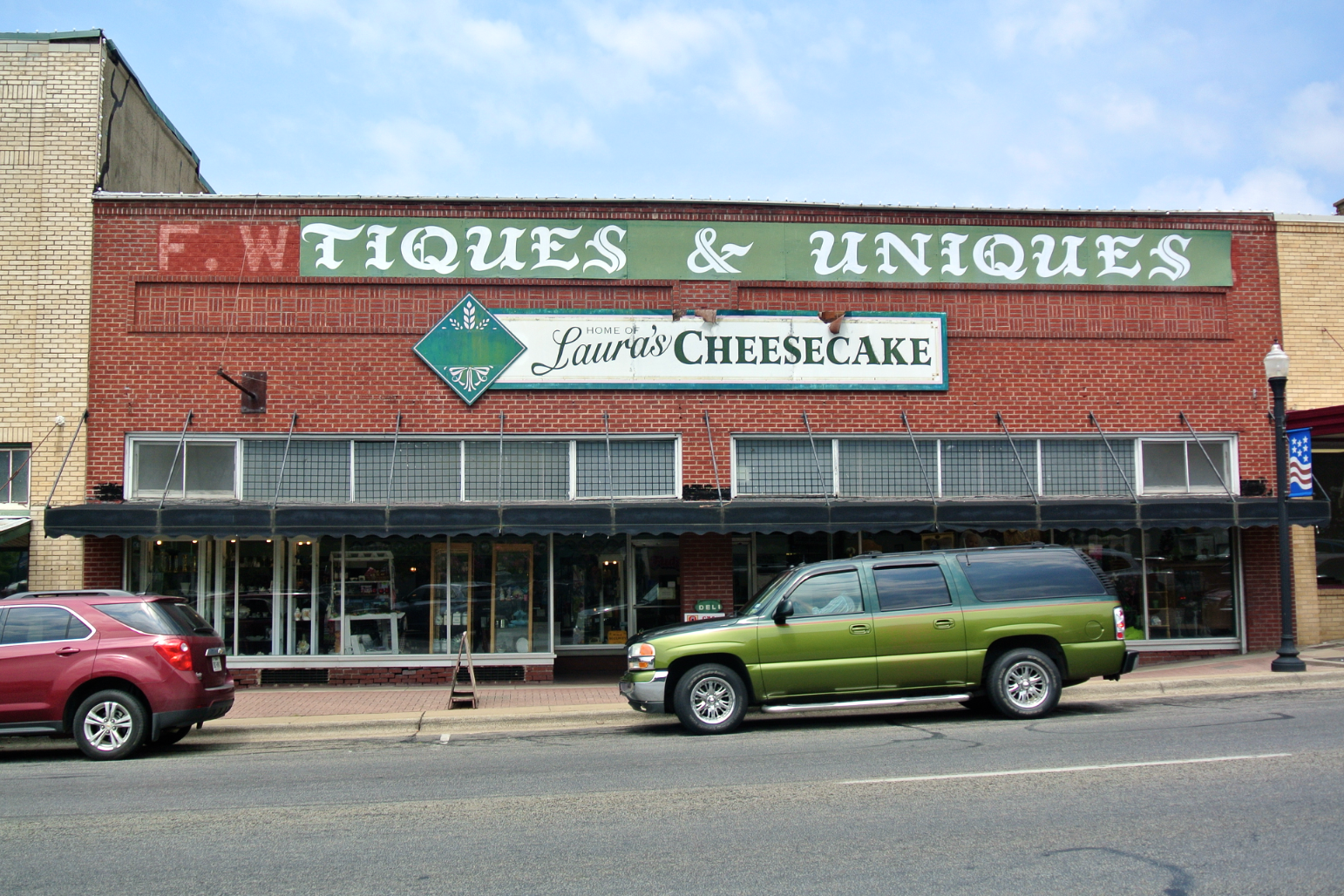 Try Laura’s Cheesecake if you’re ever in town. 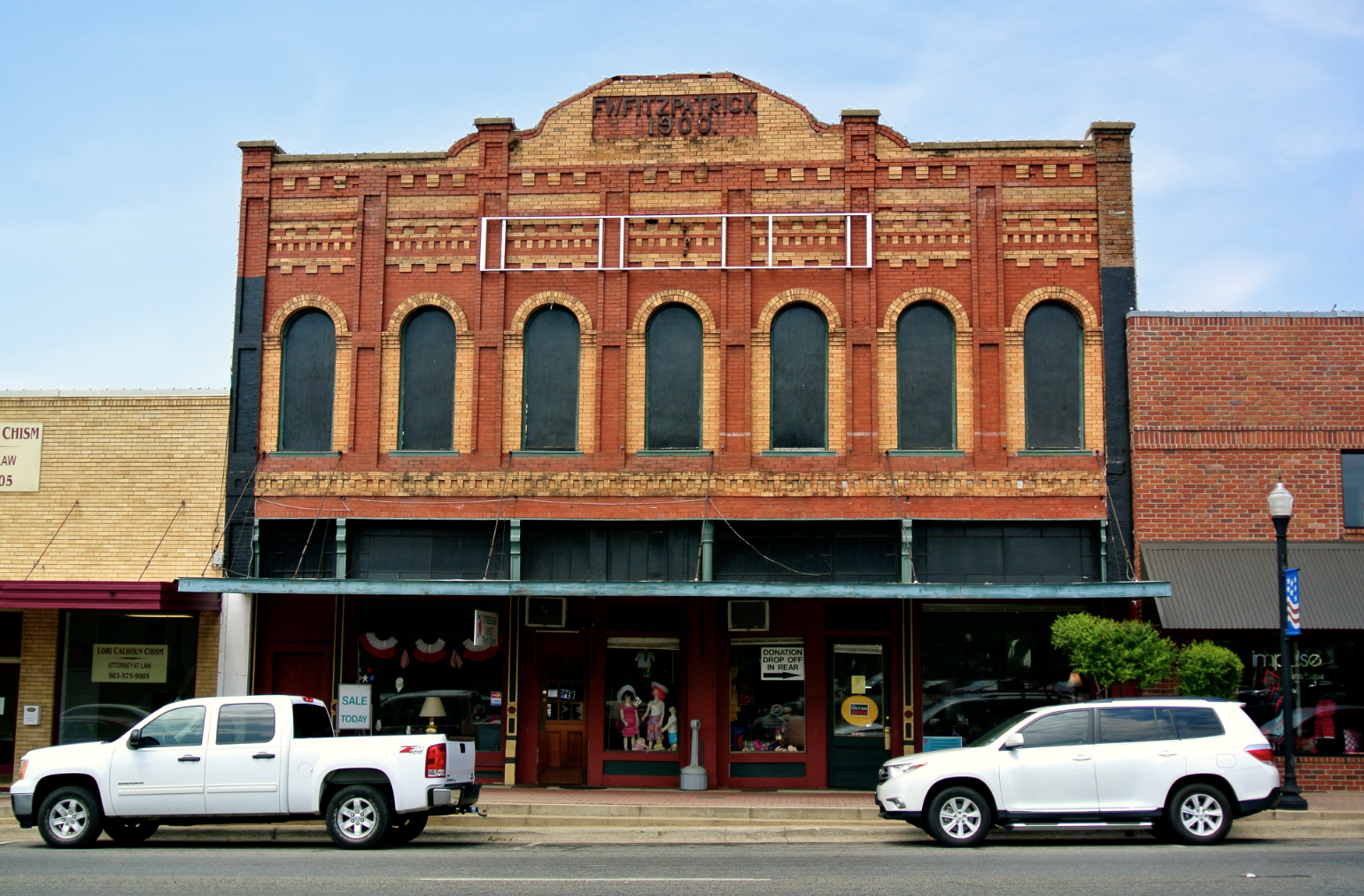 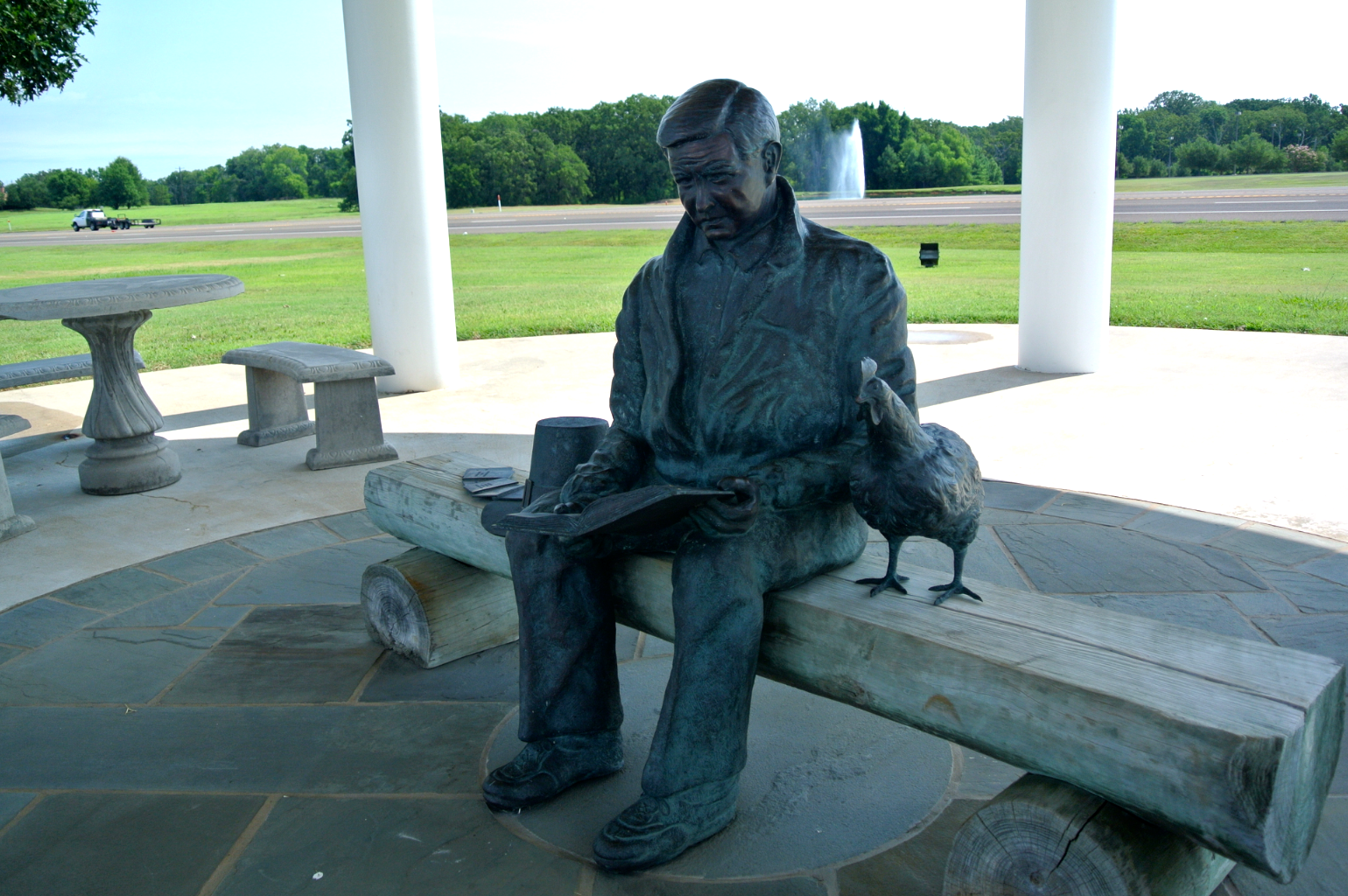 The headquarters for the Pilgrim’s Pride Corporation (poultry processing) is just south of Mount Pleasant on Highway 271. It’s an interesting roadside stop. 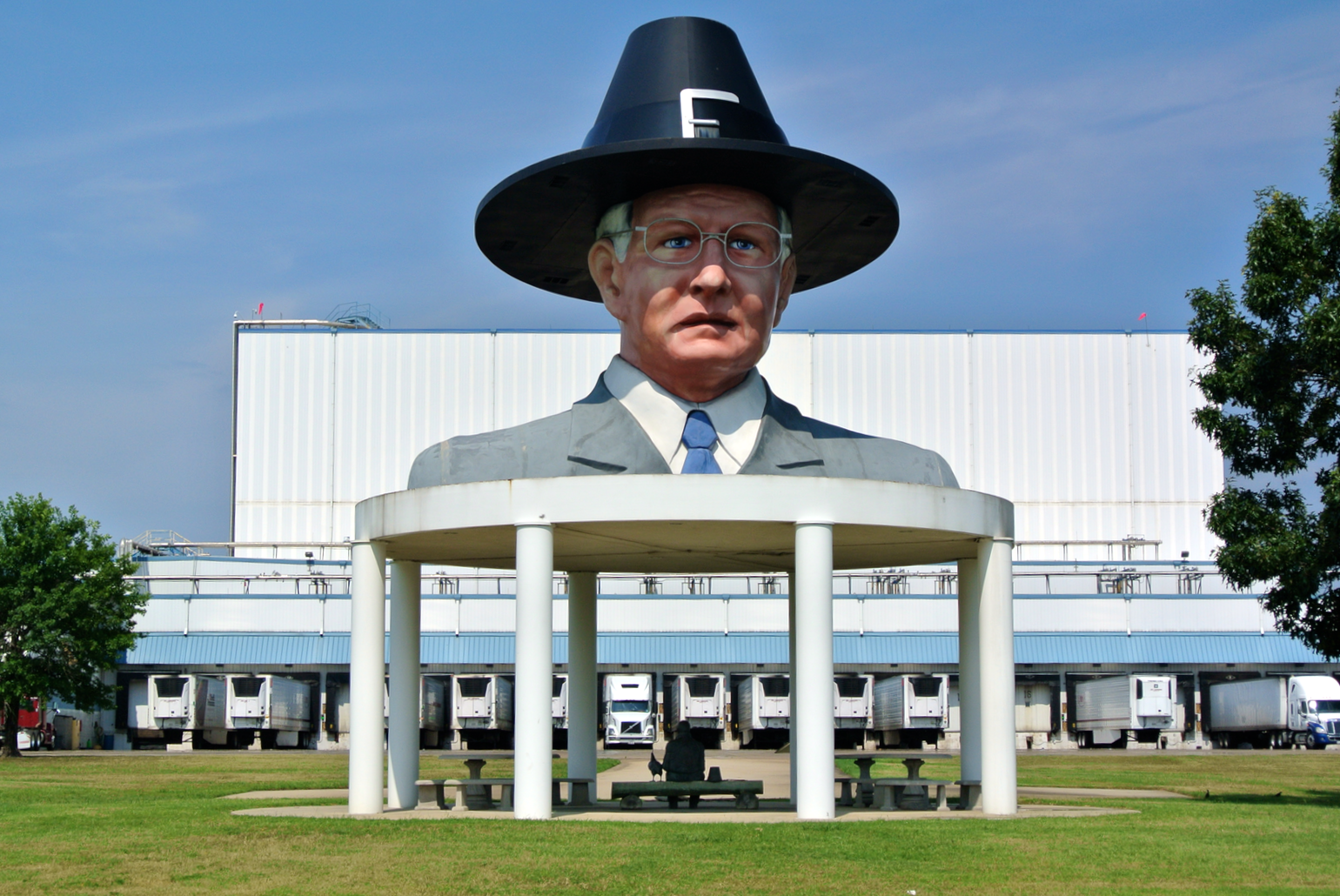