“[Franklin] comprises 294 square miles of the post oak belt and is heavily wooded; post oak, blackjack oak, and pine trees predominate. The terrain varies from nearly level to rolling, and the soils are predominantly loam with clay subsoils. The county is drained by the Sulphur River, which forms its northern boundary, and Big Cypress Creek, which runs through the southern portion.”

“The Moscoso expedition of 1542 may have passed through or very near what is now Franklin County. It could be, however, that the first European contact with the area did not occur until after 1719, when the French founded Le Poste des Cadodaquious in what is now Bowie County. Although the French occupied the post for more than fifty years, little is known about their activities. It seems probable, however, that they did explore as far to the southwest as Franklin County.”

“White settlement began in the late 1830s along the eastern edge of what became Franklin County; most of the early settlers came from the upper southern states, predominantly Tennessee. The Cherokee Trace passed through the area, and by the late 1840s the central part of the county was also settled. By 1870 Mount Vernon had a population of 223. The county was marked off by the legislature in March 1875 and named for Judge Benjamin C. Franklin, an early Red River County settler. An election was held on April 30, 1875, to select the county seat. Mount Vernon won by a large majority, and the matter was never again contested.”

“The most important factor inhibiting growth was the lack of adequate transportation. The county had no navigable waterways and before 1876 no railroad. This deficiency, coupled with the availability of equally suitable croplands nearer Jefferson, the major market for Northeast Texas, prevented the area from becoming dominated by plantation agriculture in antebellum Texas. As a consequence the county was predominantly white.” 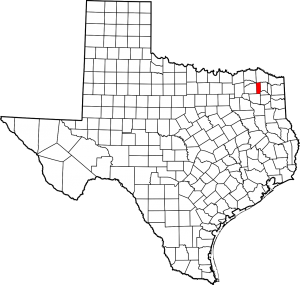 “The county was overwhelmingly rural and agricultural and remained so for more than seventy subsequent years. Two crops dominated the agricultural economy—cotton, the principal cash crop, and corn, the principal food crop. Together these two crops accounted for three out of every four acres of cropland harvested in 1880. From 1880 through 1950 the acreage planted in these dominant crops varied from six out of ten acres to more than eight out of ten acres harvested.”

“The county was hit hard by the Great Depression in the 1930s, which had actually begun for farmers in the mid-1920s. The average farm in Franklin County in 1930 was worth $2,085, compared to the 1920 average of $4,172. But while the value had dropped drastically, the average farm size had increased from seventy to seventy-five acres. For most citizens the depression meant harder times, but it did not bring poverty, since most residents were already poor.”

“During the 1930s the programs of the New Deal helped to alleviate some of the worst effects of the depression. A local development also provided some economic opportunities; oil was discovered near Talco in northwestern Titus County in 1936, and it was soon ascertained that the oil deposit extended into the northeastern portion of Franklin County. Since that time, oil has been discovered in various portions of the county, but all of the fields are comparatively small. … As a 1939 issue of the local newspaper put it, the oil boom had helped the county, but it was “not large enough to disrupt the economic structure nor disturb the way of living.”"

“By 1940 the number of farms had fallen to 1,310. The average farm size had increased to 105 acres, and the average value per farm had fallen to $1,870. While the drop in value was a sign of continuing problems in the agricultural sector of the economy, there were also signs of a more positive trend. For the first time since 1900, more than half of all farmers owned the land they worked. Although cotton was still the principal cash crop in 1940, the number of acres in cotton had fallen from 37,969 acres in 1930 to 16,582 acres in 1940.”

“The value of farms began to rise in the 1940s, but the other trends that were evident in 1940 continued through the 1970s. The number of farms steadily declined until 1982, when there were just 478 farms. Those farms had an average size of 245 acres and an average value of $204,630. By 1982 livestock production dominated the agricultural economy, accounting for 96 percent of total cash receipts in agriculture.”

“In the 1990s hay was the principal crop, and farmers also grew blueberries, blackberries, and peaches. Poultry production increased to meet the needs of the Pilgrim plants in nearby Pittsburg and Mount Vernon. Fewer people made their living in agriculture, and consequently the population fell, since the county had no cities and a very small industrial base. The decline that began in the 1920s continued until 1960, when the population was reported as 5,101, the lowest figure ever recorded.”

“Opportunities for boating and fishing abound. Cypress Springs Reservoir, the largest lake in the county, covers 3,400 acres. Several other lakes dot the landscape. In addition to the Sulphur River several streams run through the county. Various species of animals are available for hunting, including deer, squirrel, and quail. State Highway 37 and Farm Road 21 are scenic drives through the southern part of the county. The Rogers-Drummond House, near Mount Vernon, is listed on the National Register of Historic Places. Mount Vernon hosts a rodeo in June, a county fair in October, and a Christmas Parade in December. The Franklin County Museum Complex in Mount Vernon offers a variety of exhibits on local and natural history.”

There was an 1875 courthouse before this one, but not much is known about it.

The 1912 design was drafted by the firm L. L. Thurmon & Co. of Dallas. The contracting team was L.R. Wright & Co., also of Dallas. The Texas Historical Commission describes this striking Classical Revival courthouse as a:

“2-story, limestone building plus basement in a square, Latin cross plan with classical detailing. Temple-front portico with Doric columns and a window in pediment. Central clock tower with dome.”

The courtroom was apparently restored once in 1990. However, I know it got a second “facelift” in the THC’s 2014 restoration of the entire courthouse. 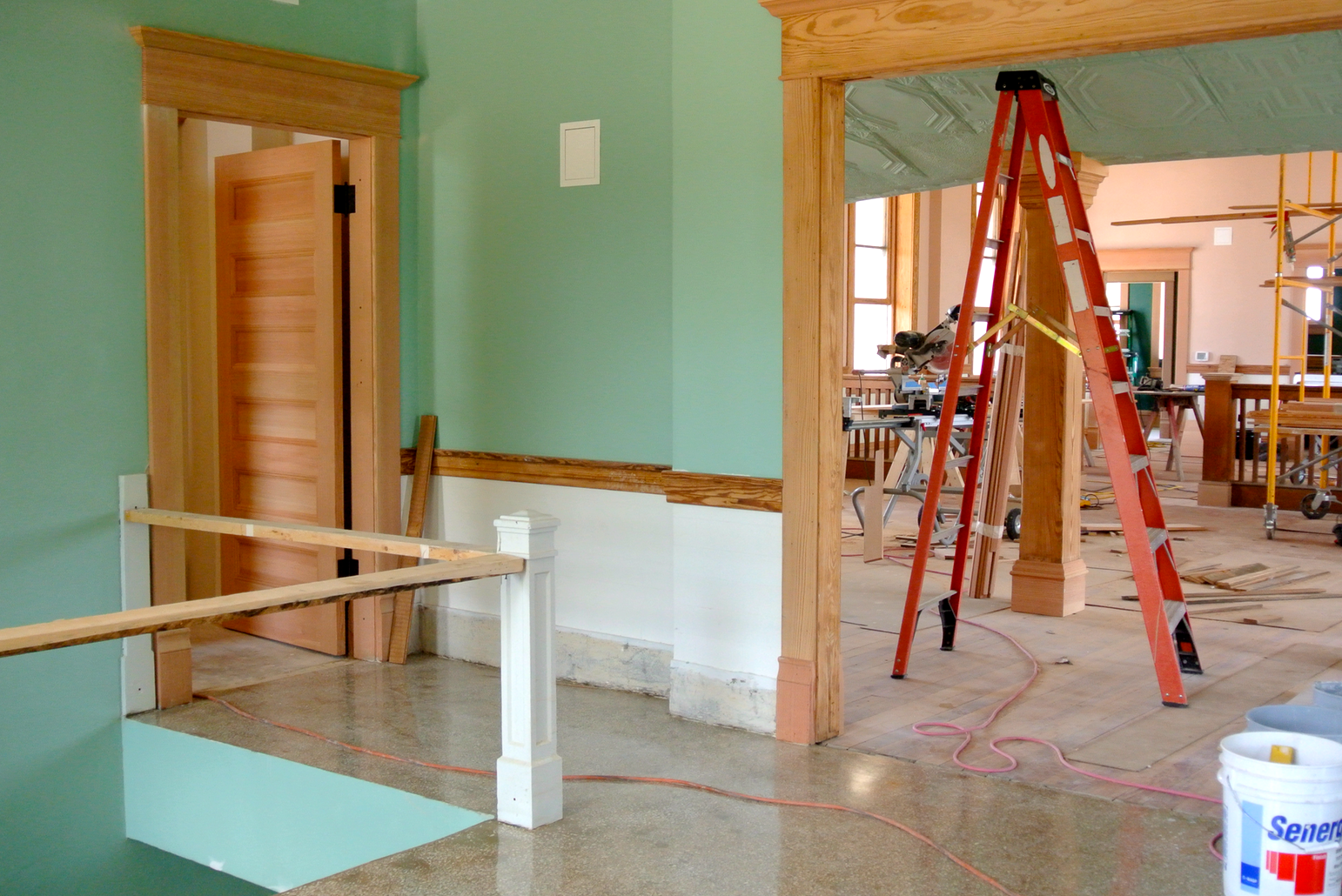 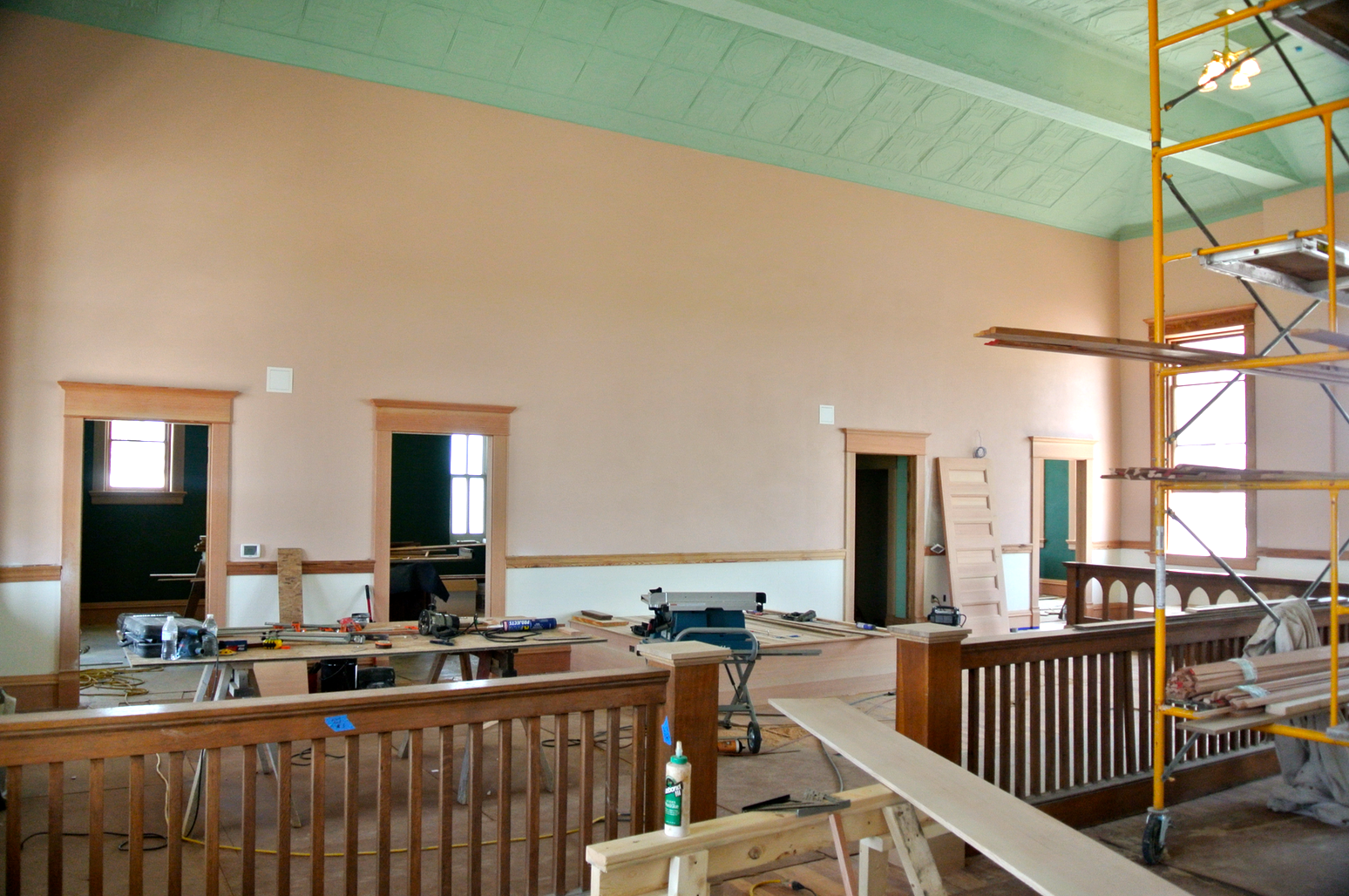 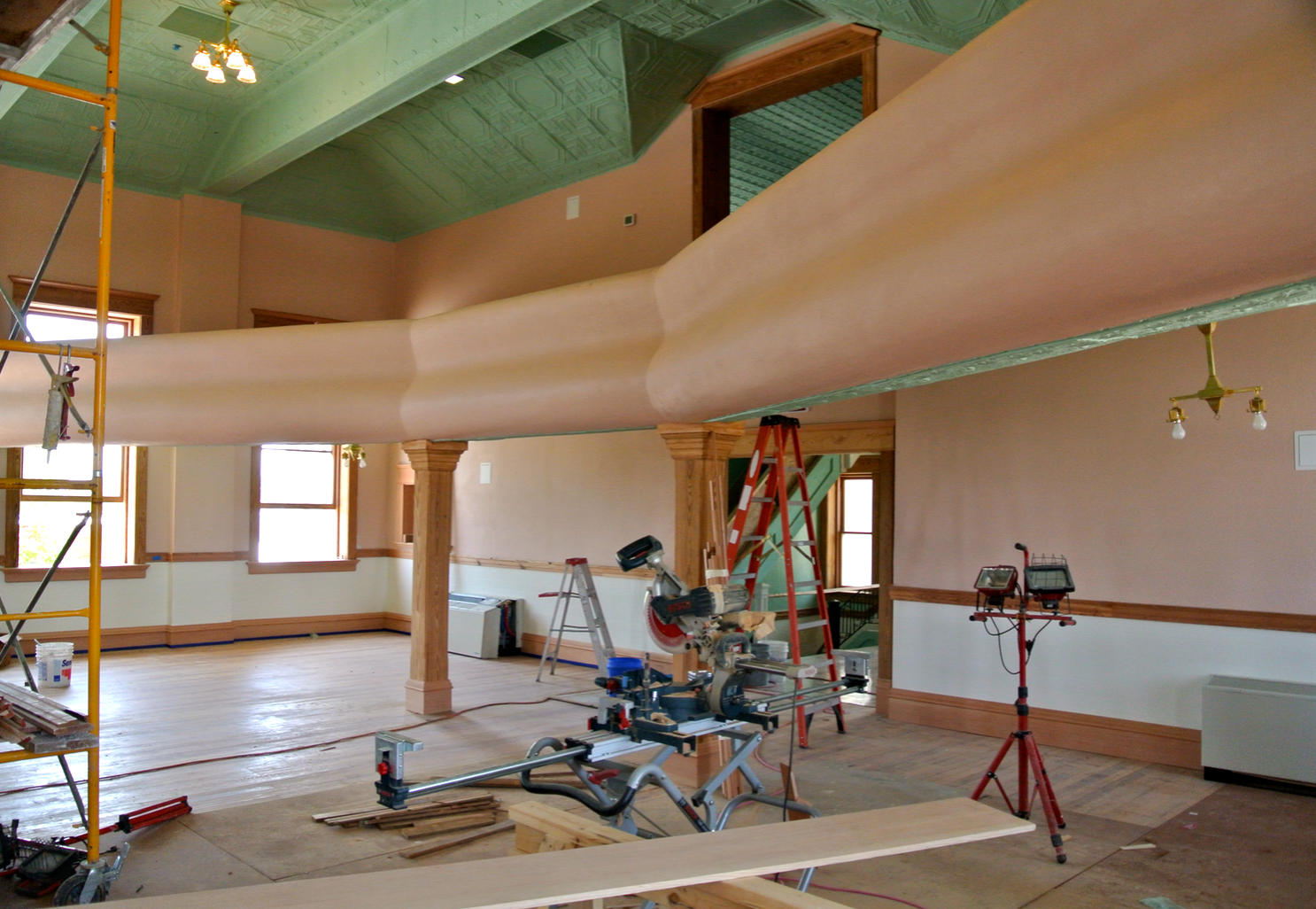 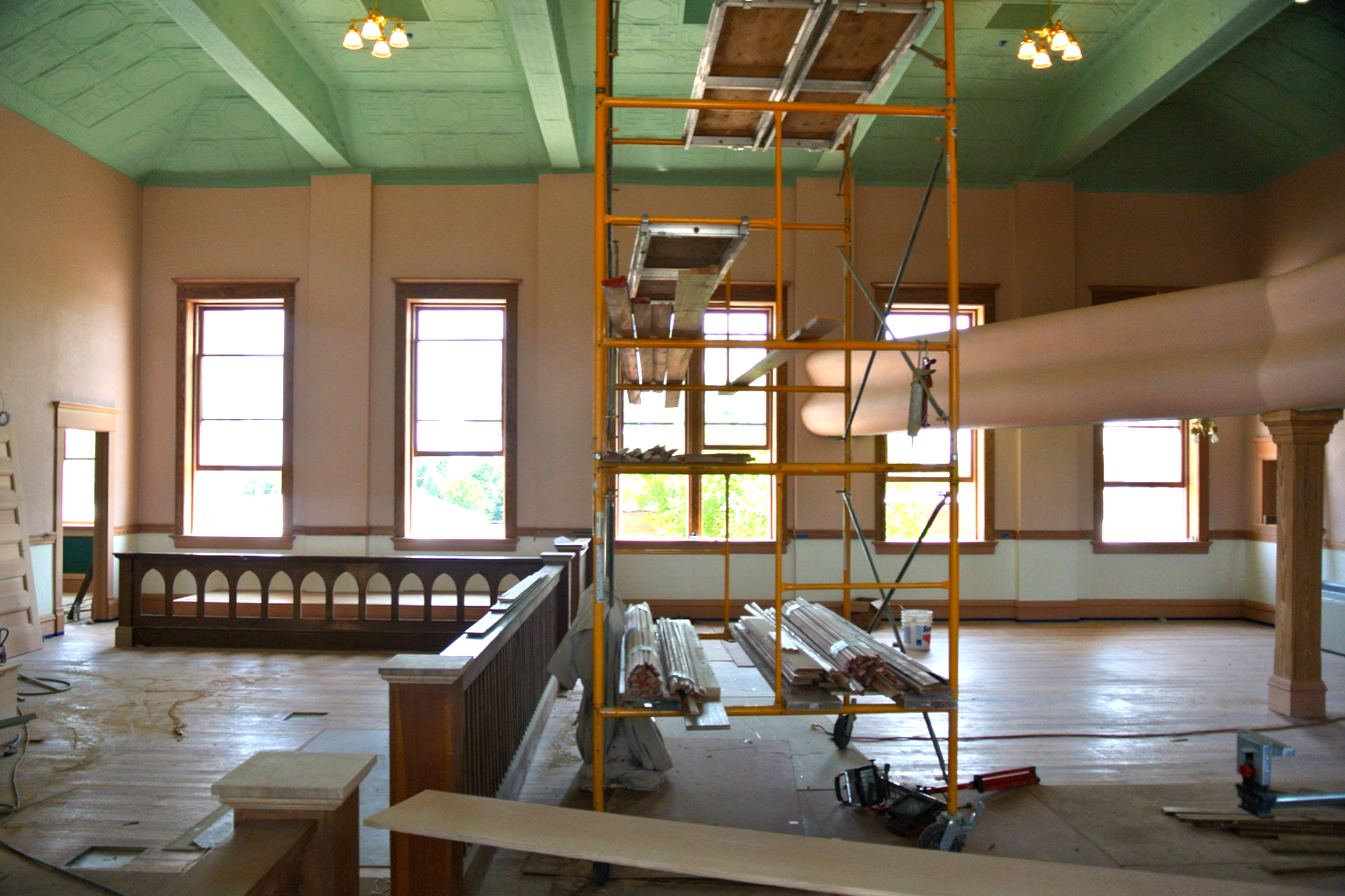 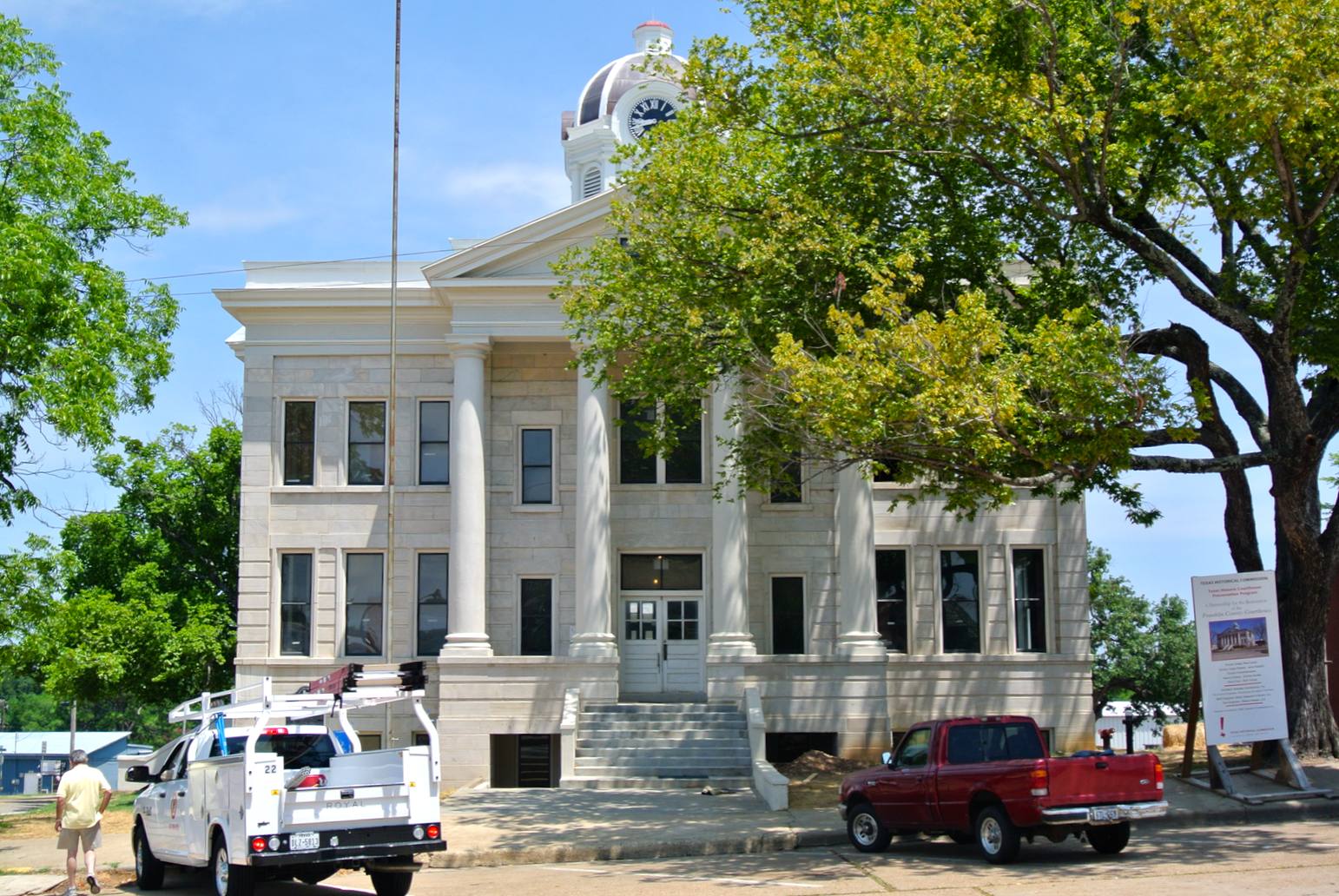 The Franklin County Courthouse’s grand, front entrance is on Dallas Street (the square’s northern edge). Interestingly enough, the courthouse itself doesn’t stand in the center of the square. 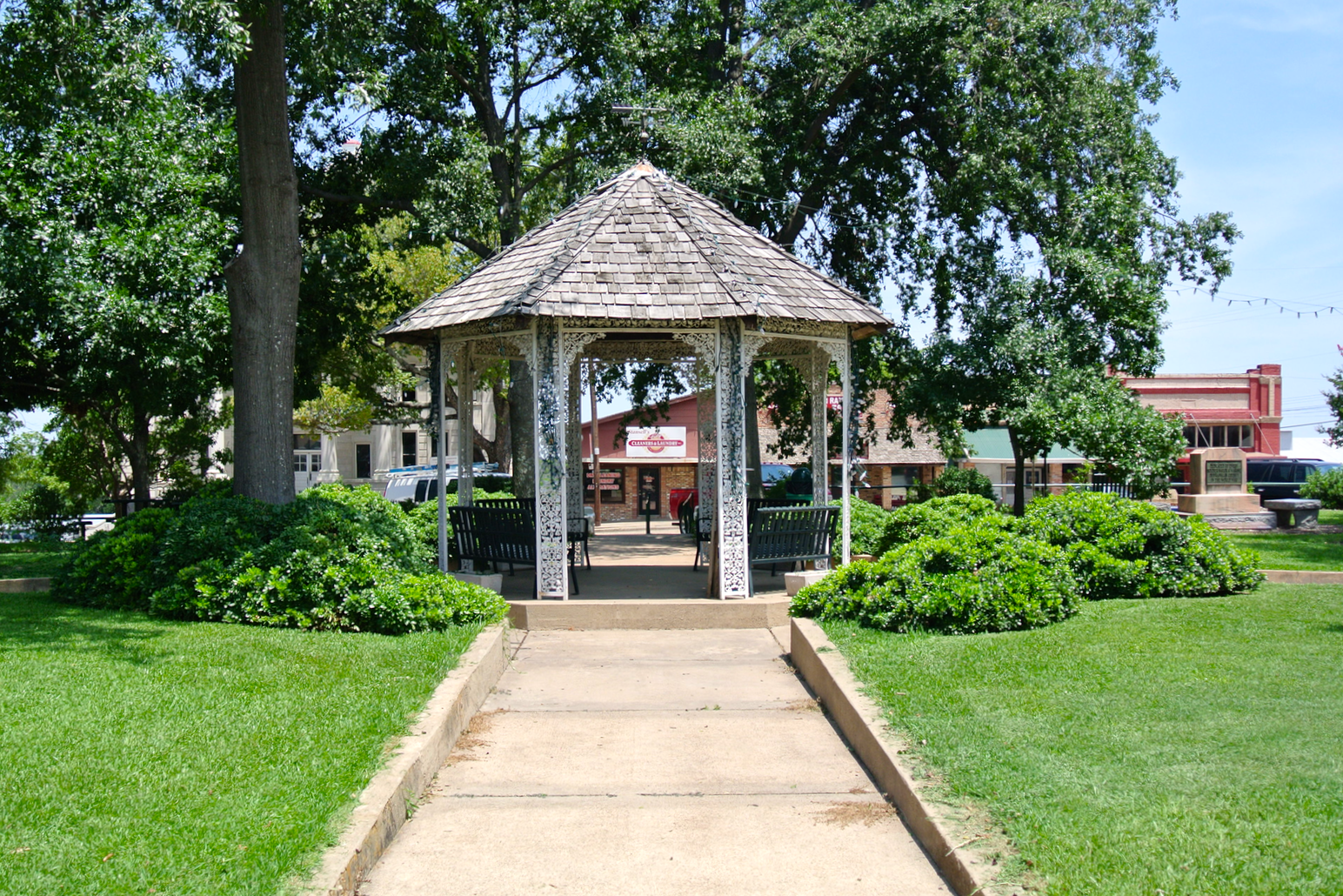 Instead, the center’s filled by a small park and gazebo. The courthouse is on the square, just not in the middle as is usually customary. 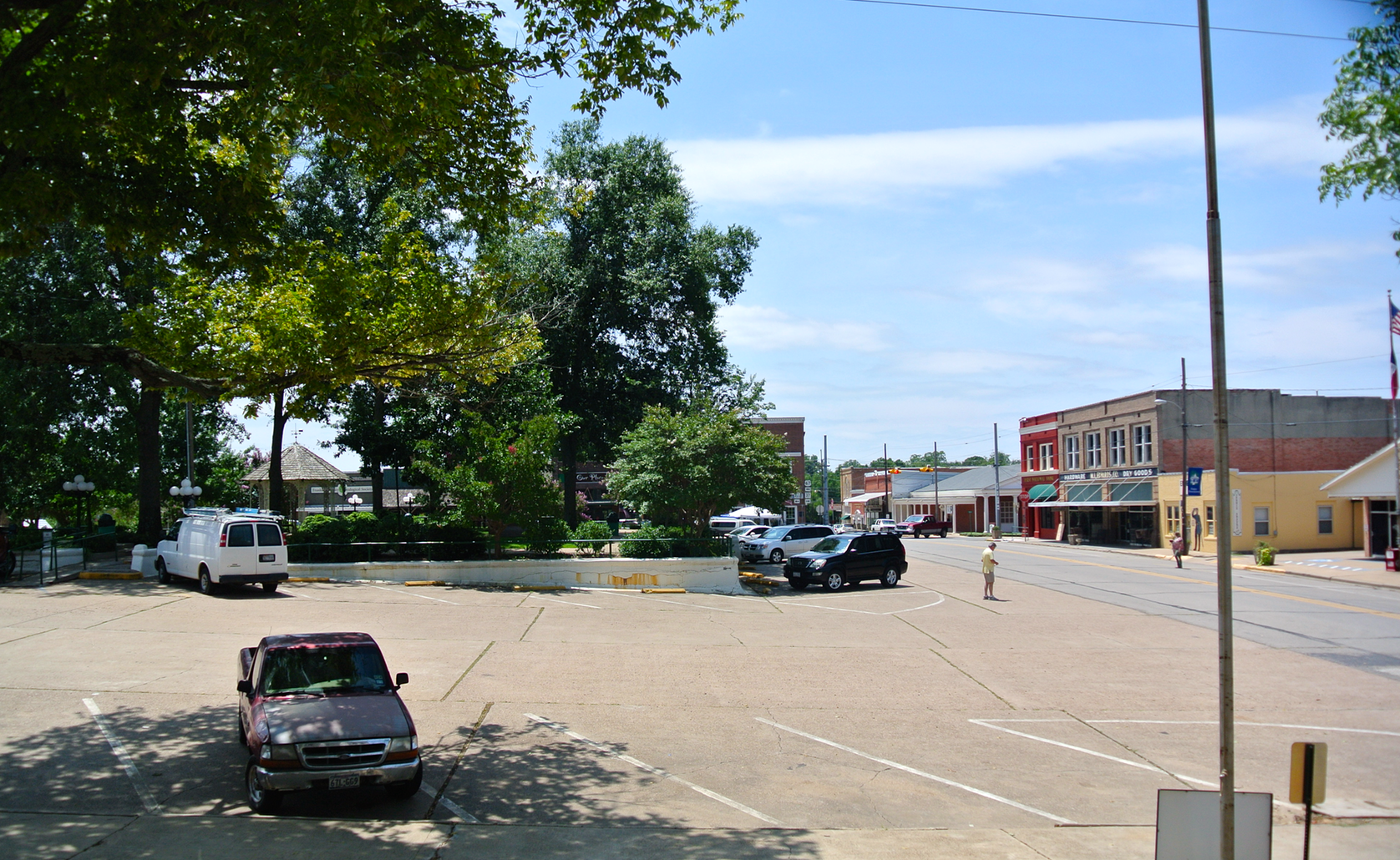 The Mount Vernon square, as seen from the front entrance 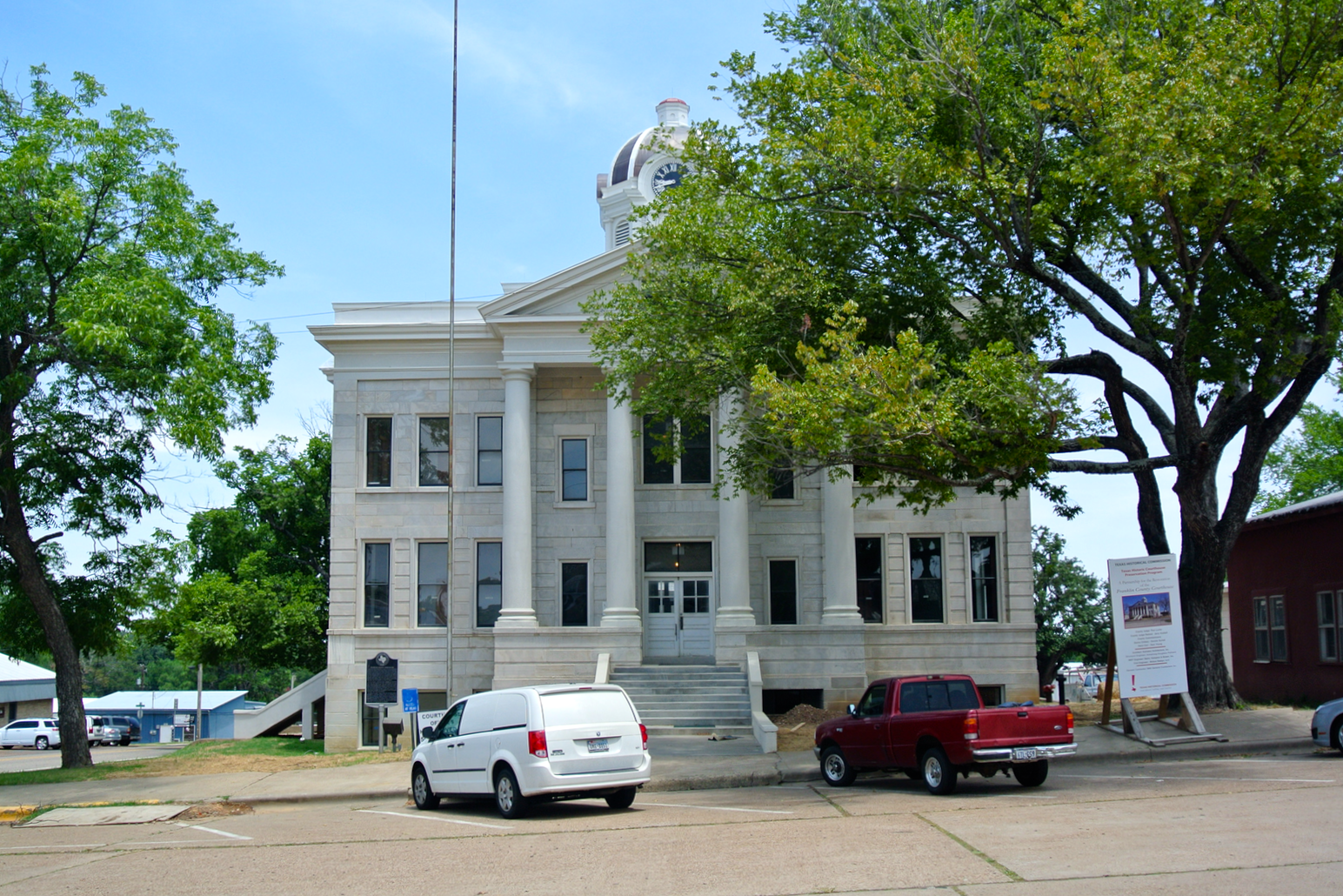 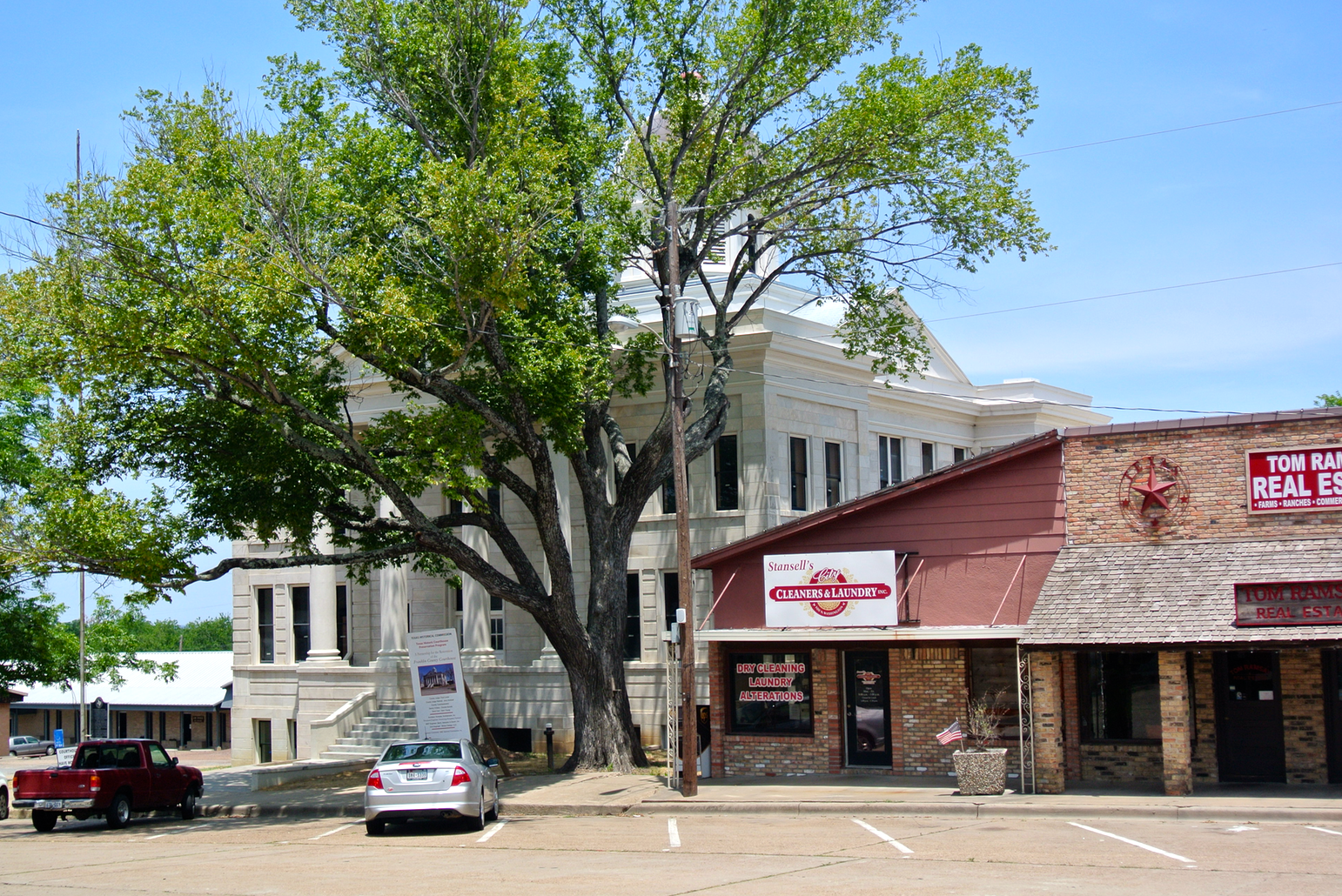 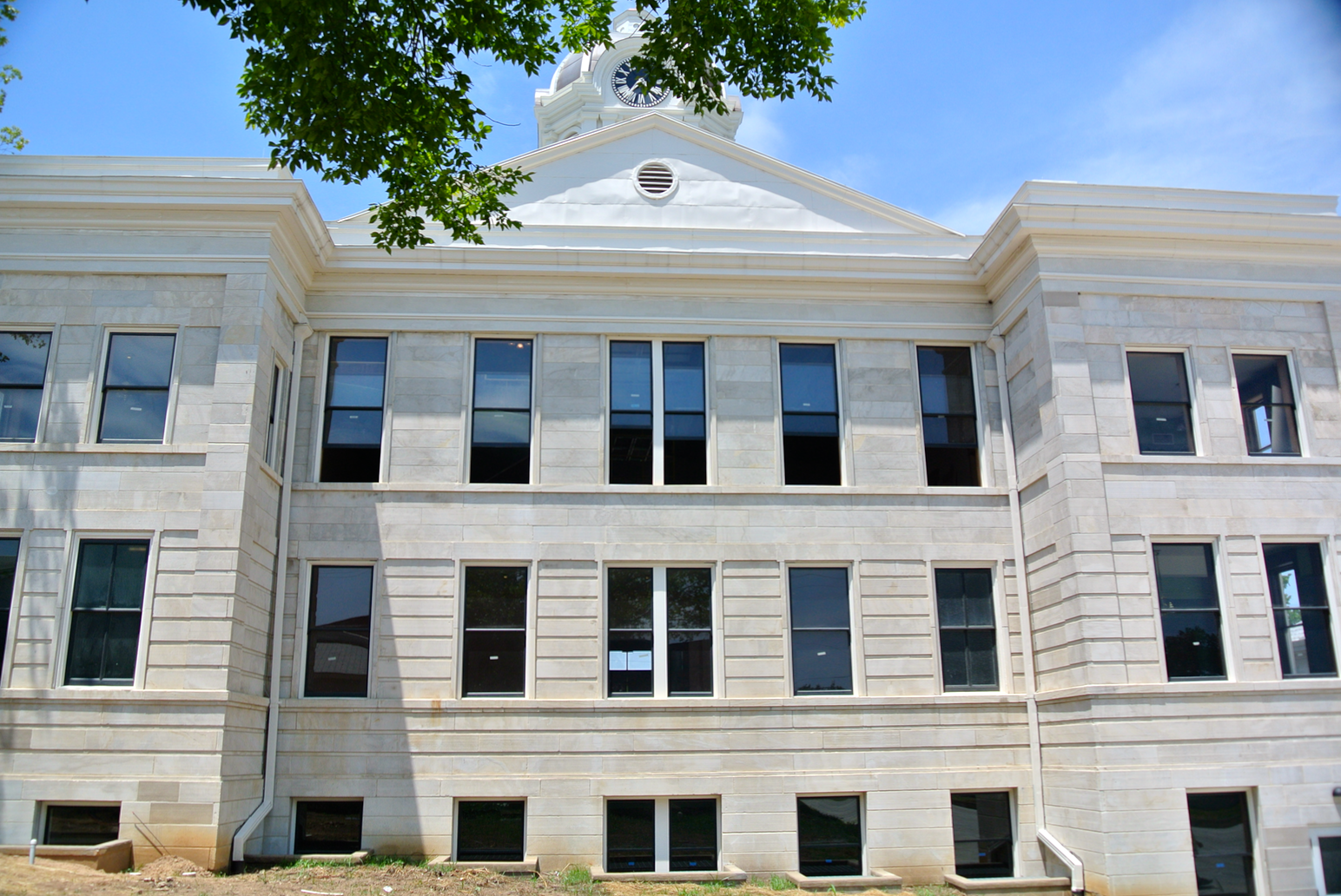 The eastern façade, which because of the courthouse’s unusual placement, doesn’t face any street 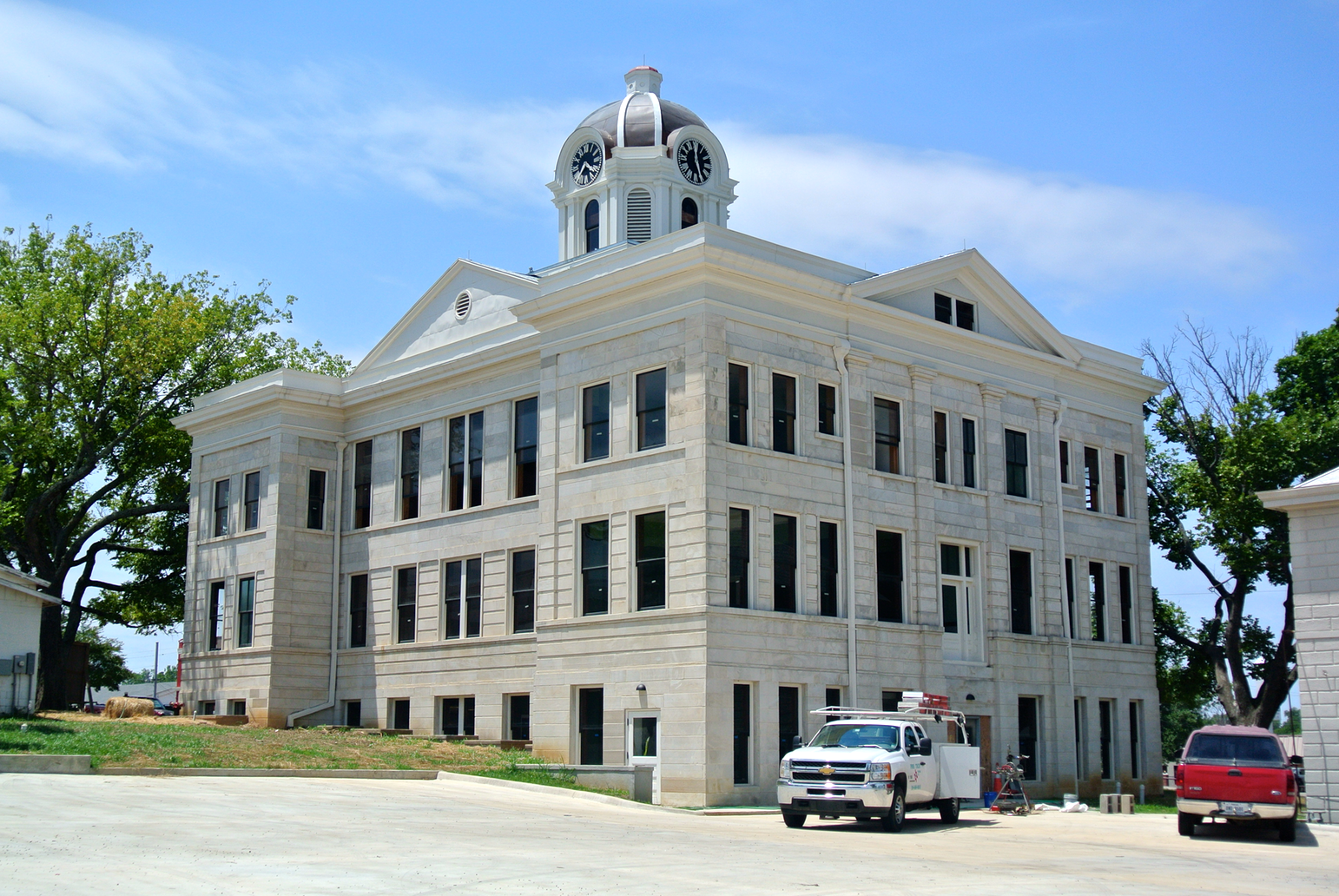 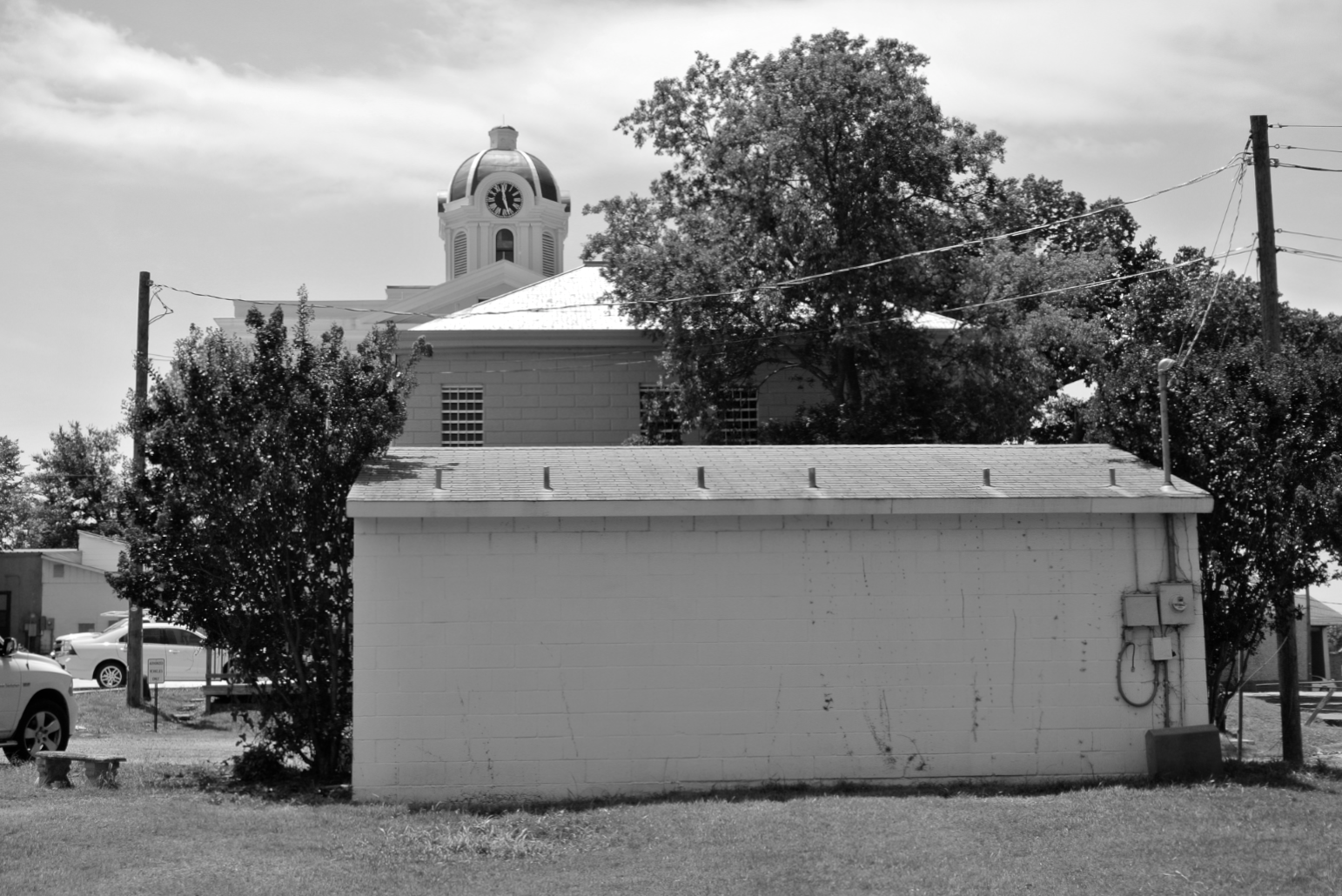 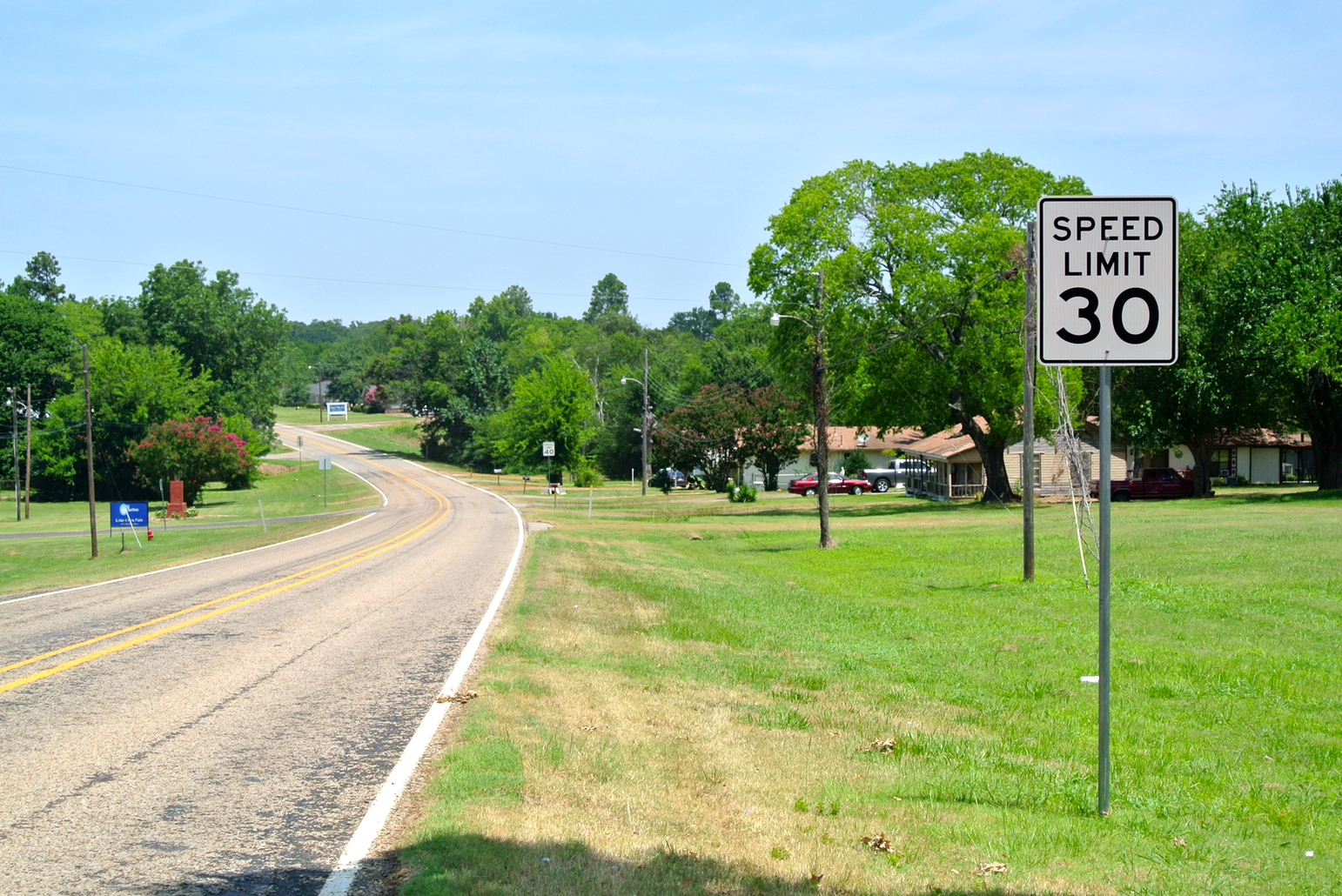 Kaufman Street, as viewed from behind the courthouse 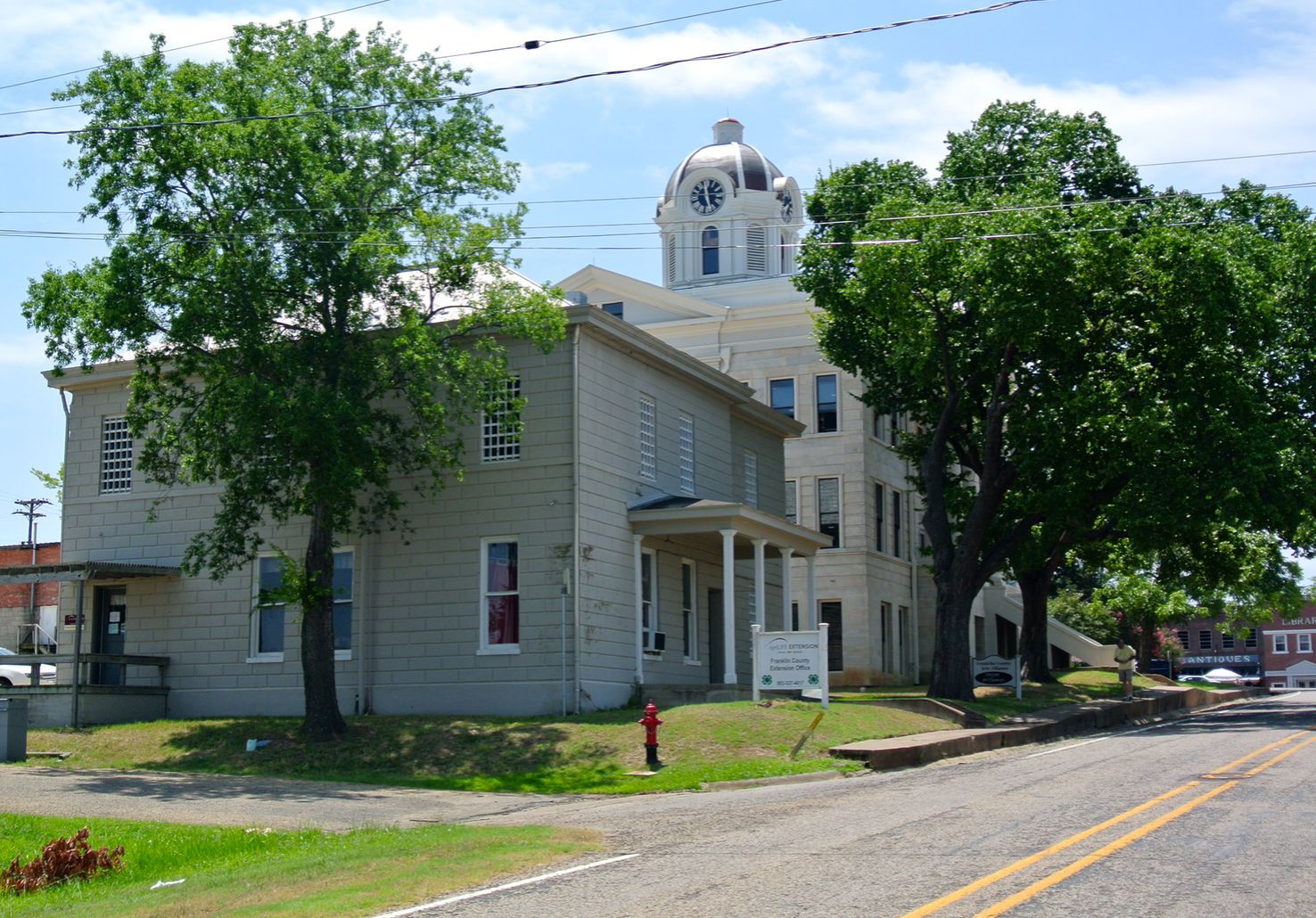 The western façade, on Kaufman Street 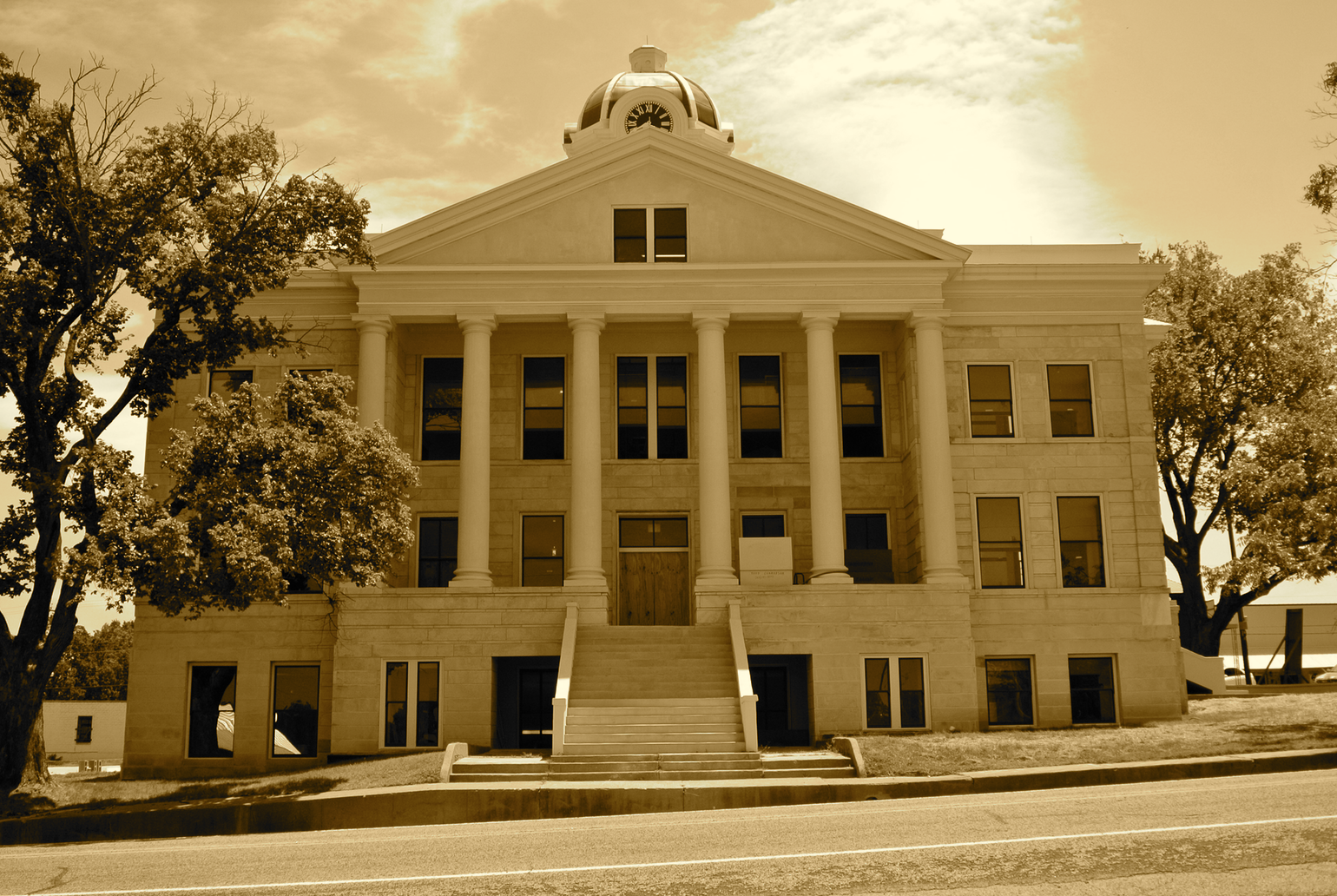 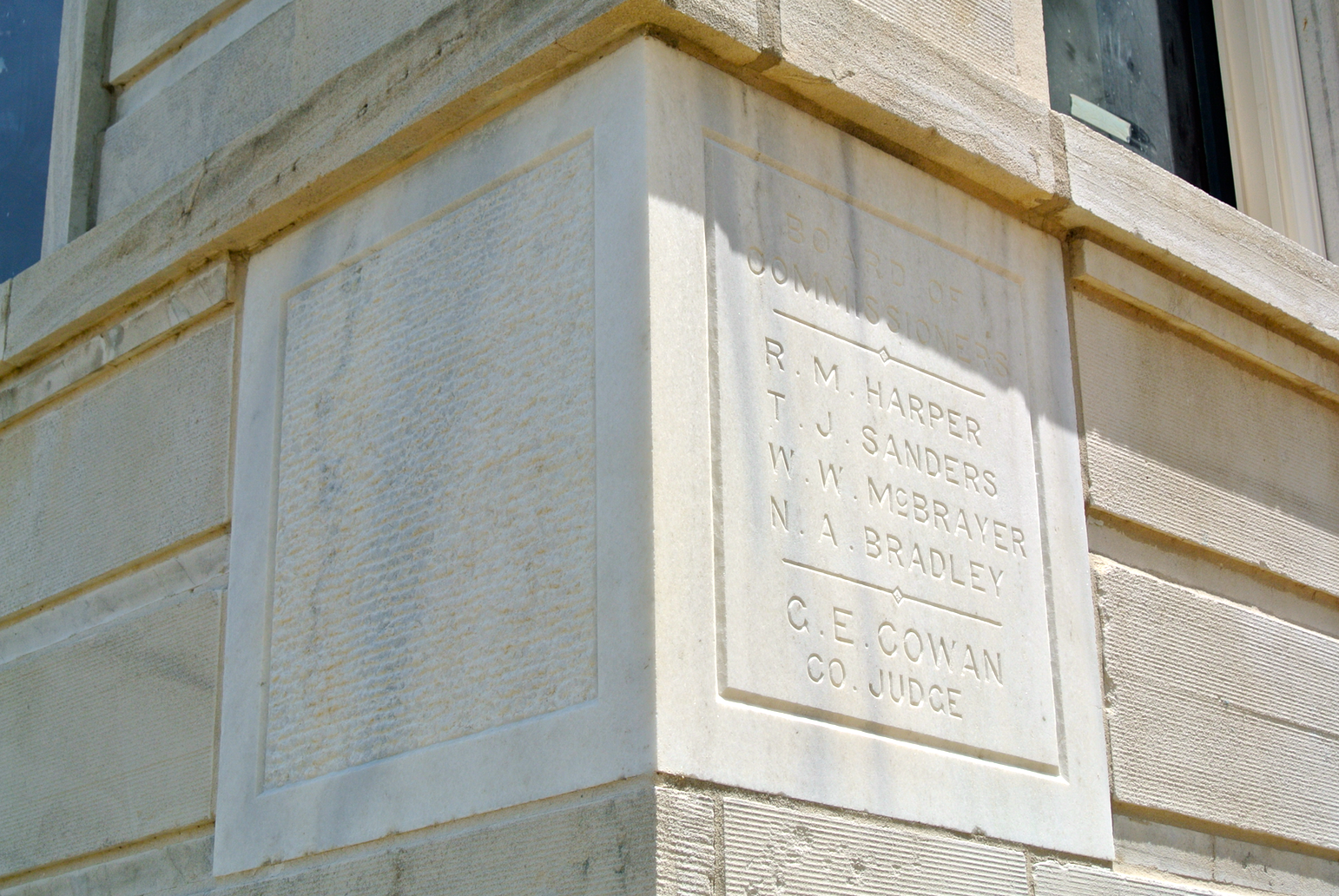 This cornerstone only displays information about the commissioners and judge at the time of the courthouse’s construction. All architectural information is on a separate stone. 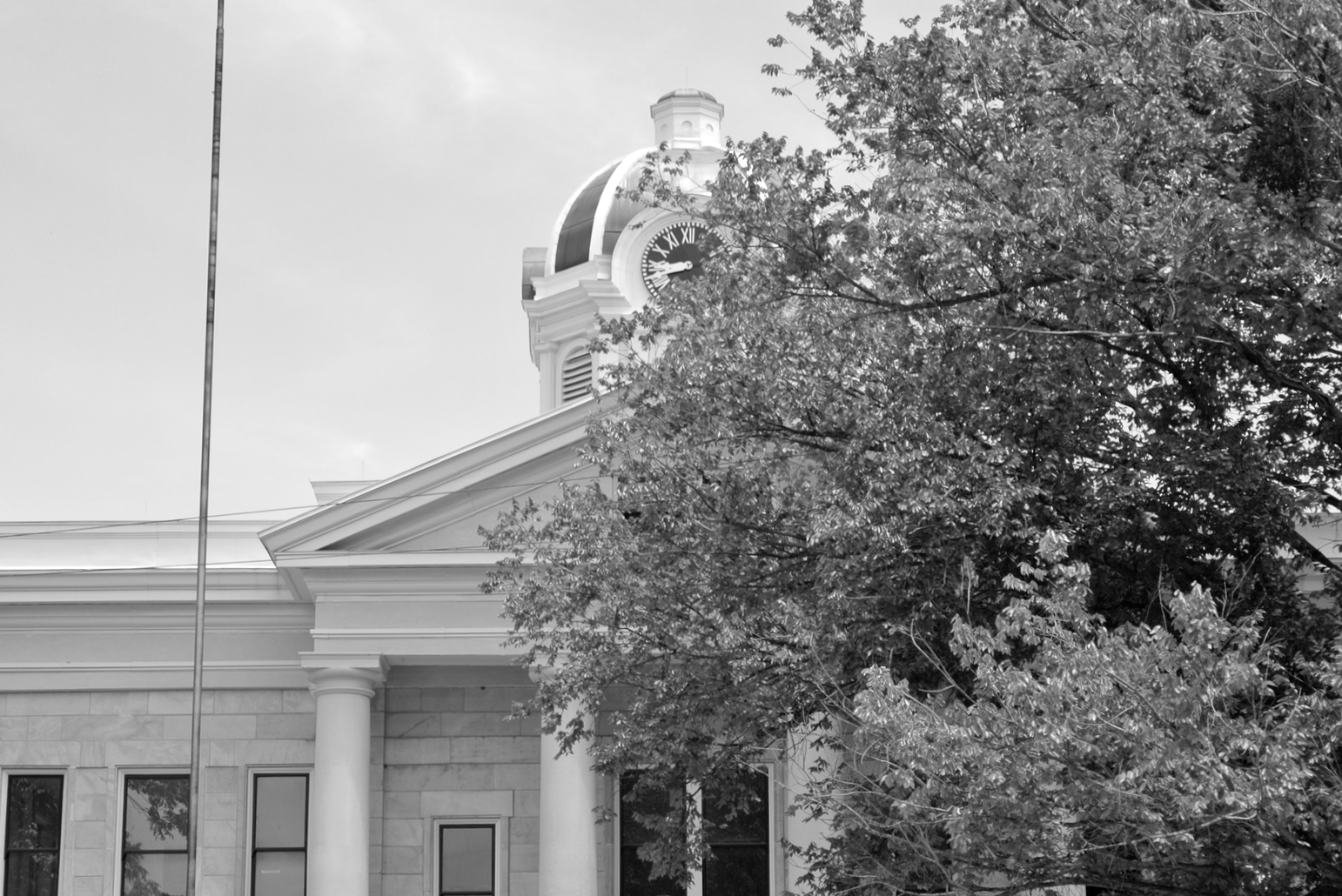 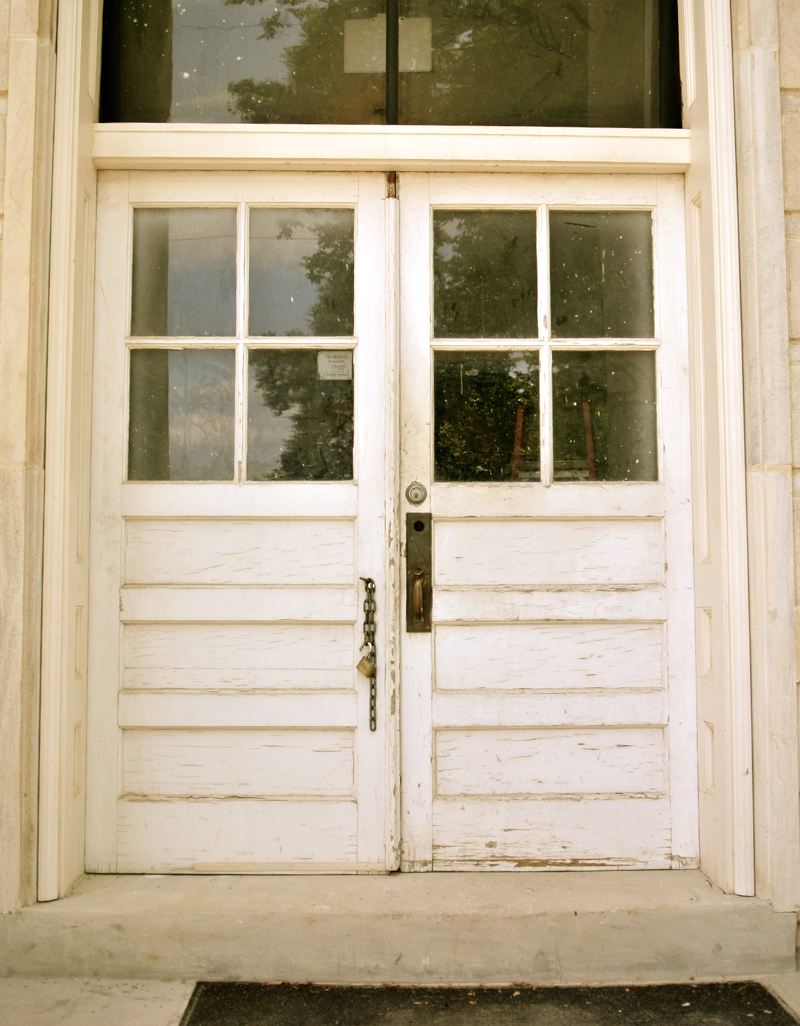 It’s a good thing the courthouse was undergoing a renovation at the time of my visit. That means this door was due to be fixed up soon. 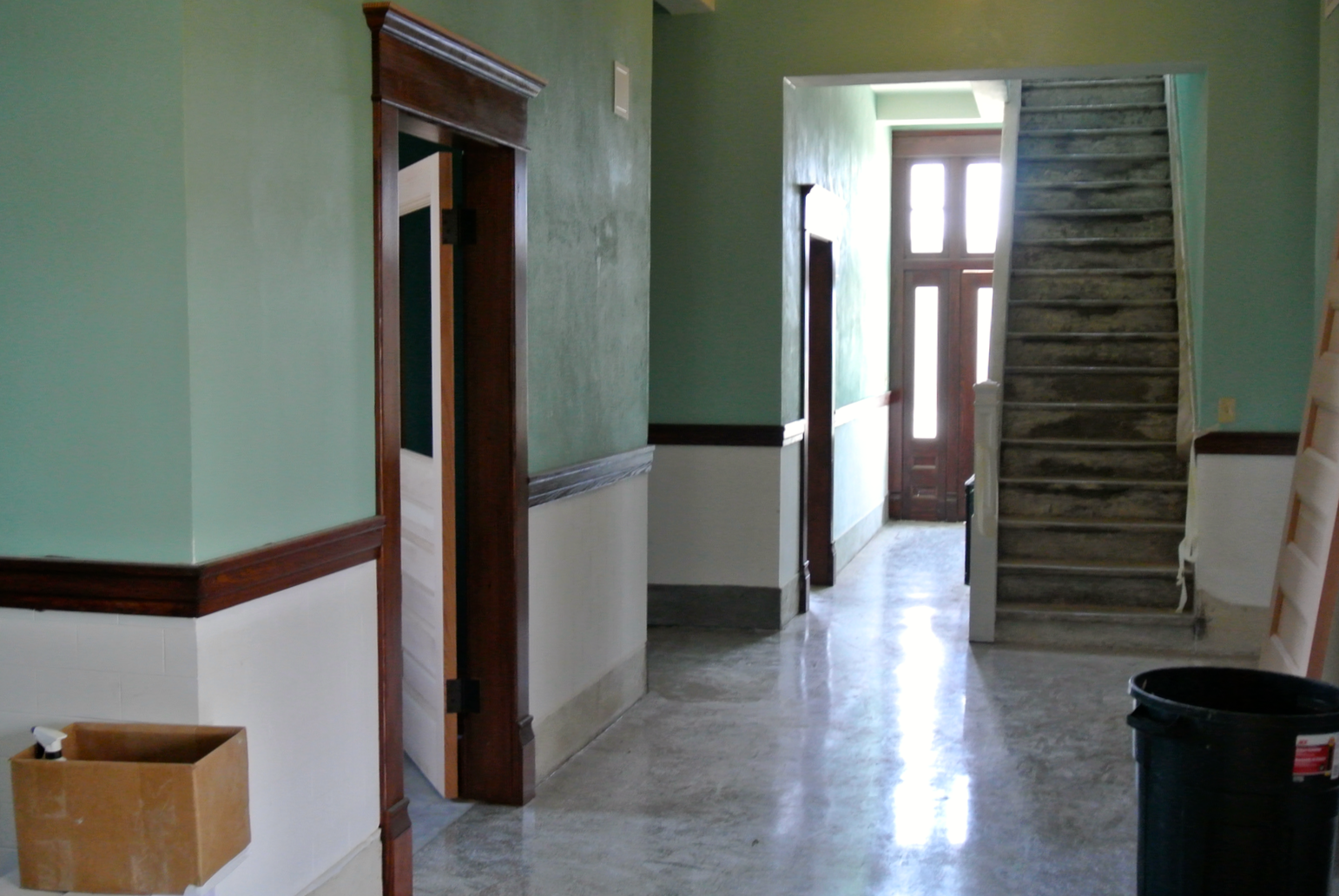 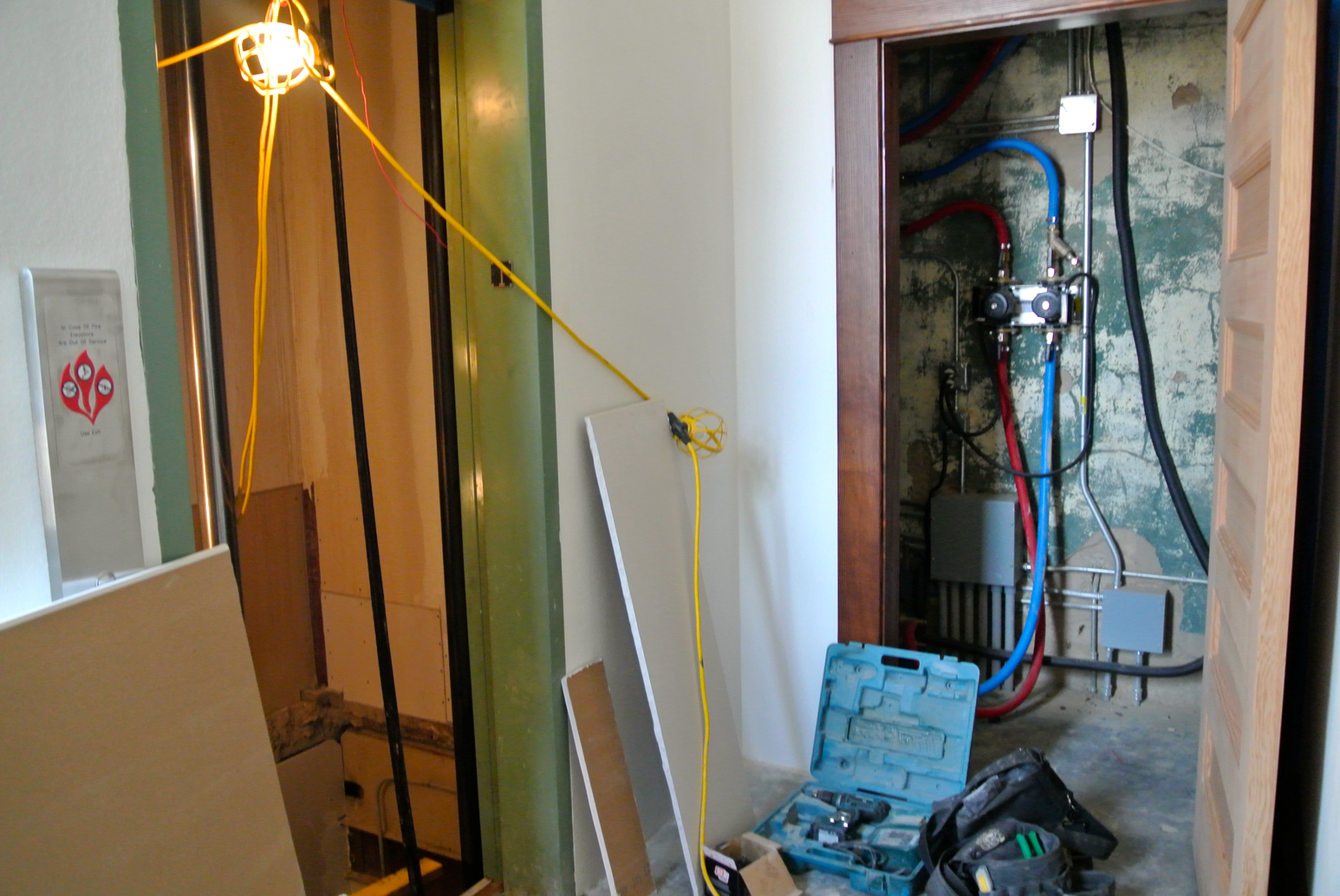 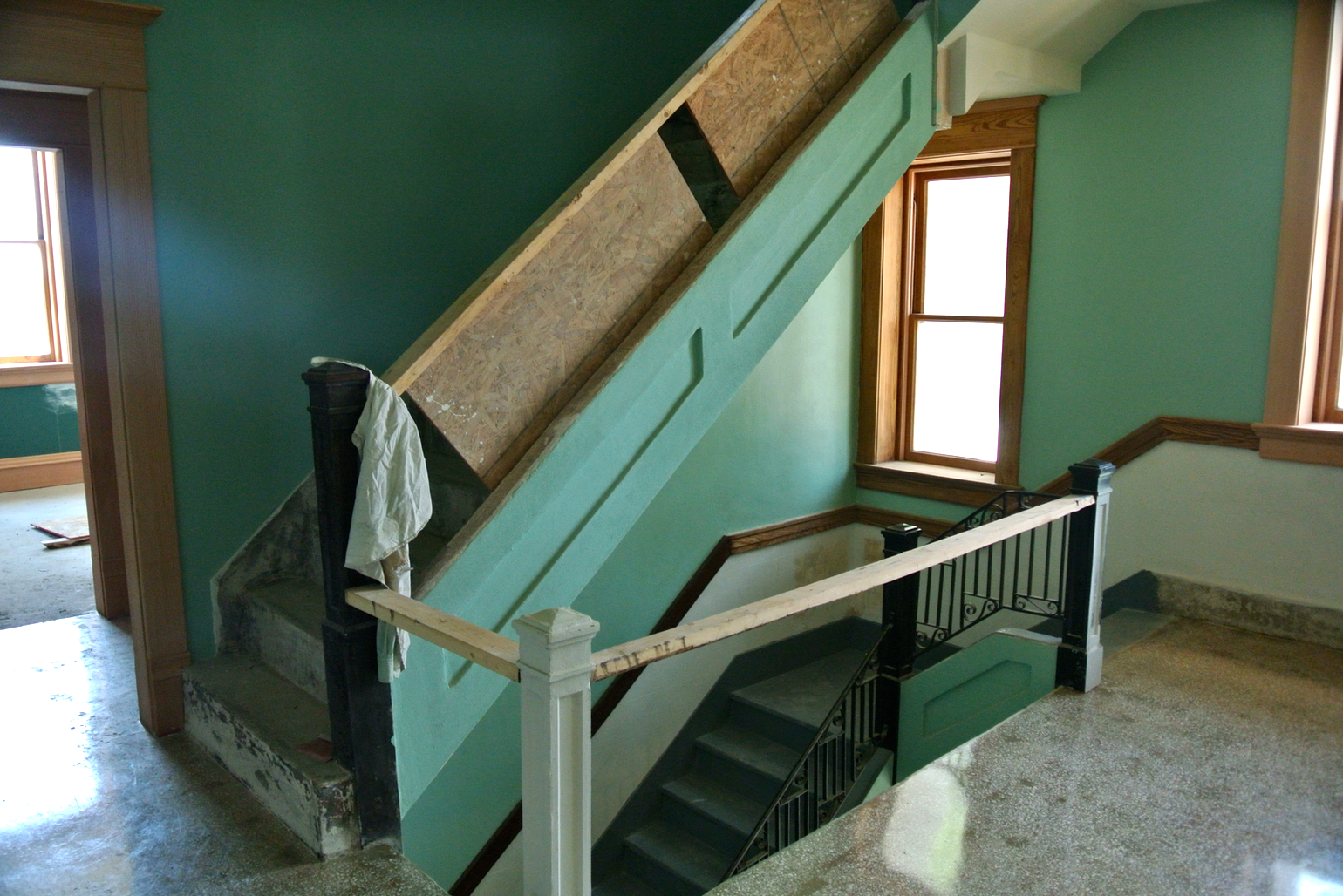 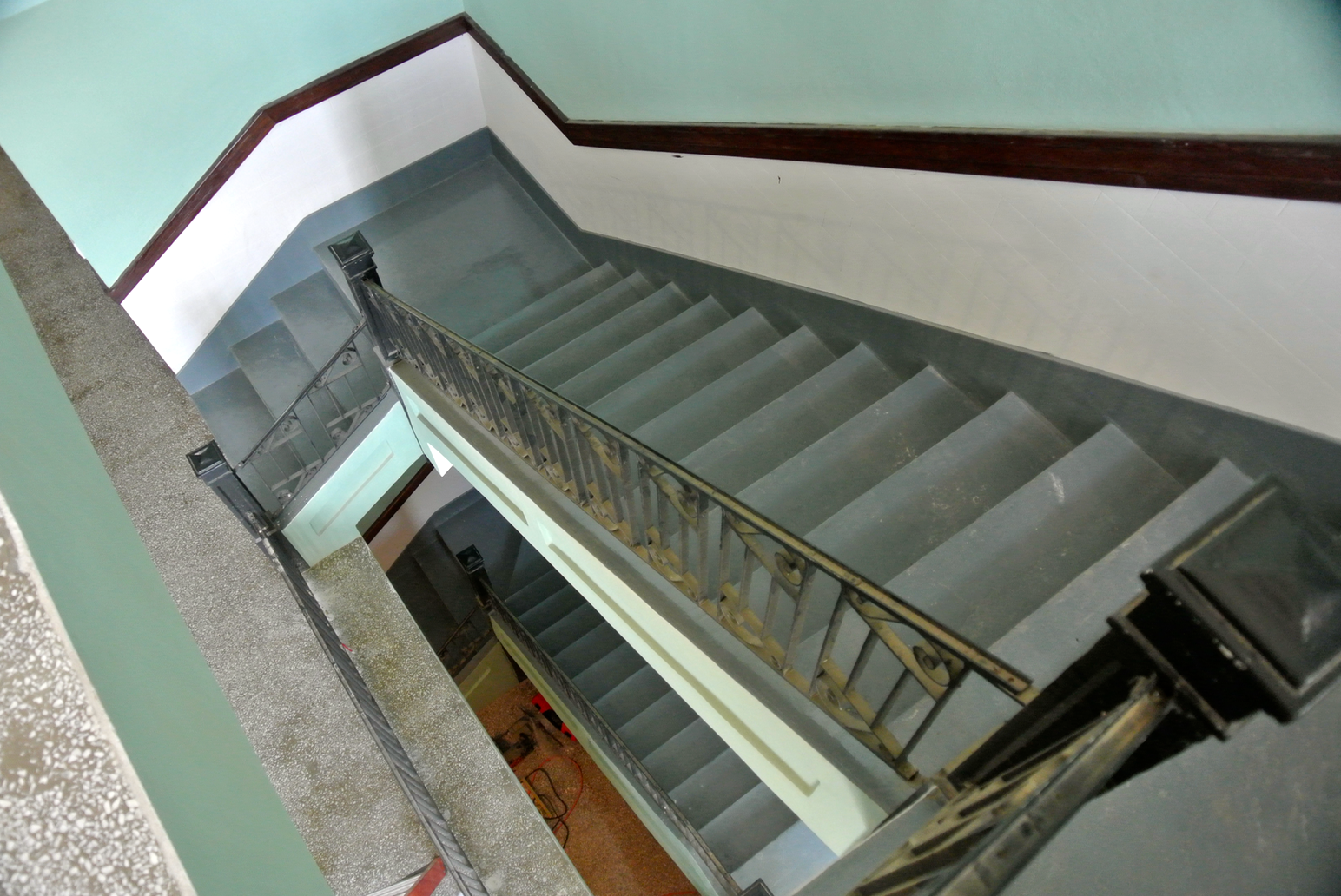 Here’s the architectural cornerstone, on display inside. This one also has a list of circa 1912 county officials beyond just the commissioners. 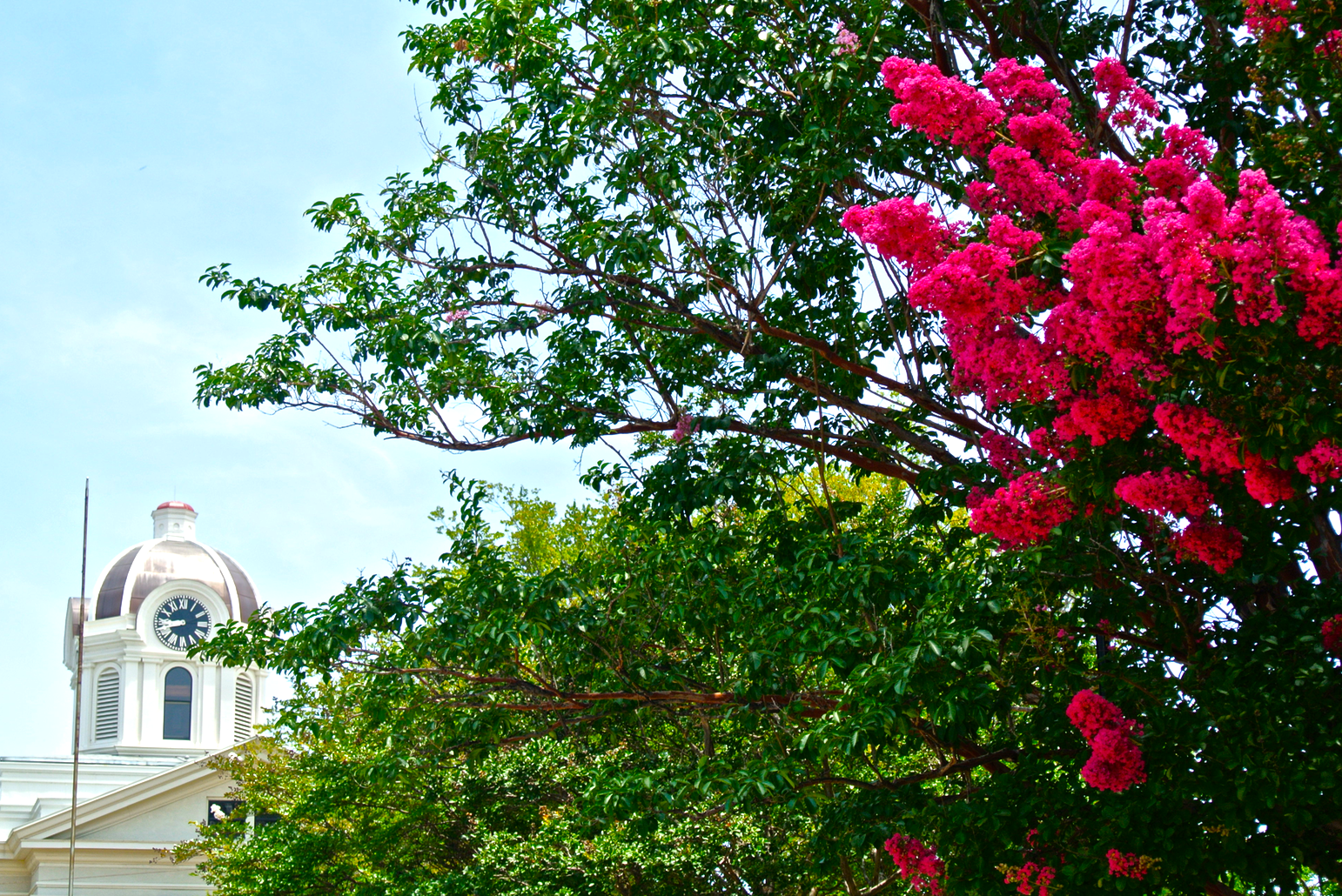 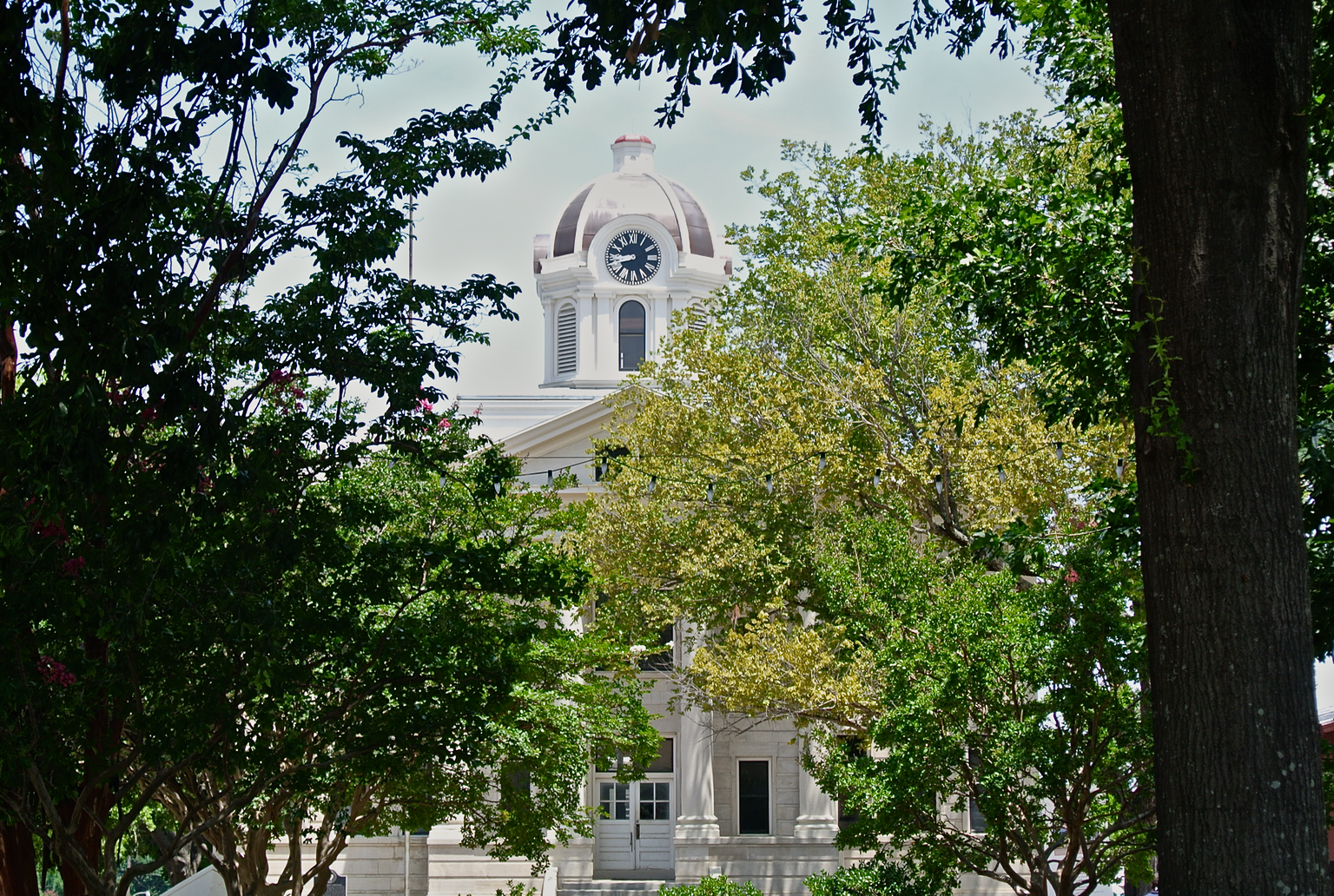 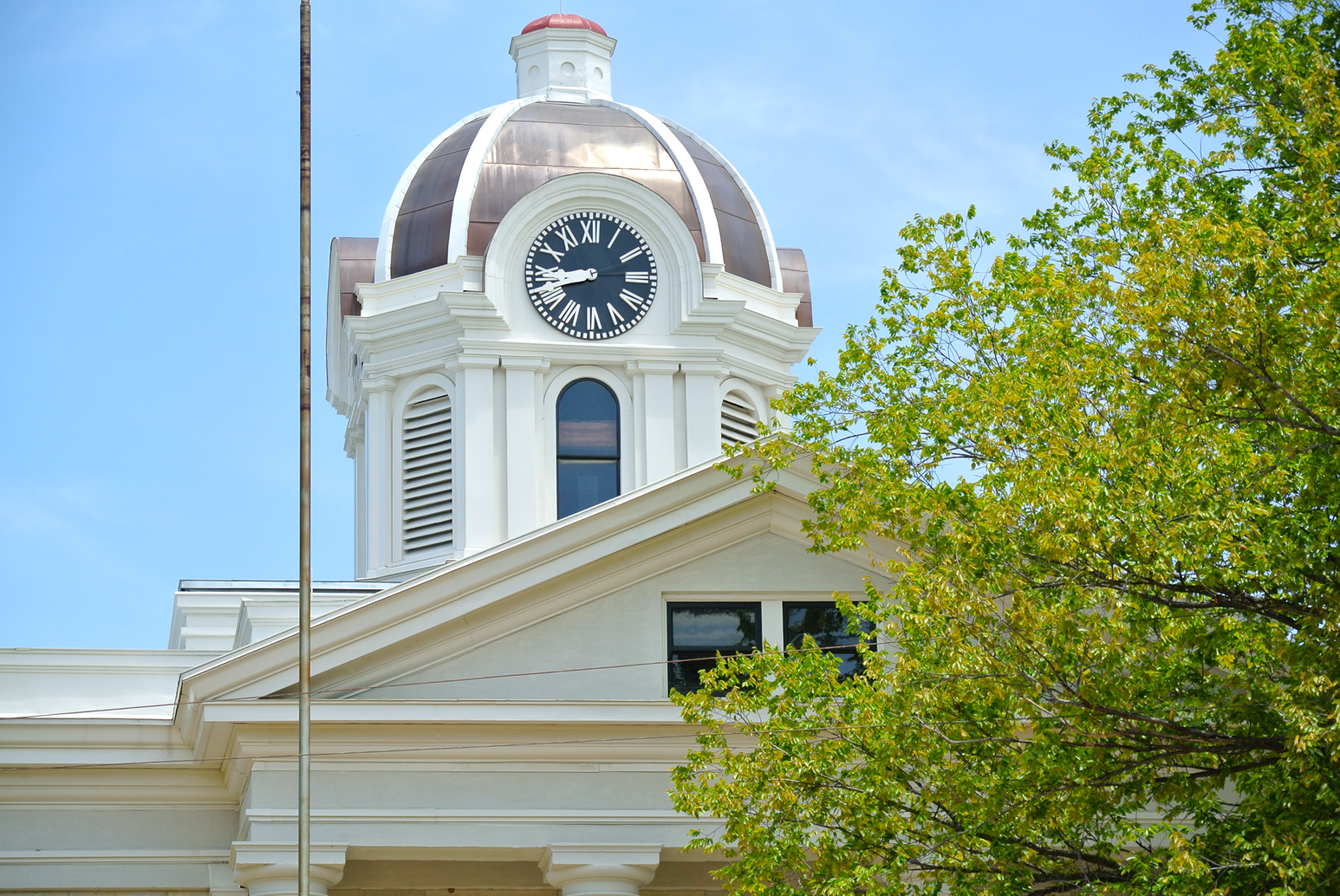 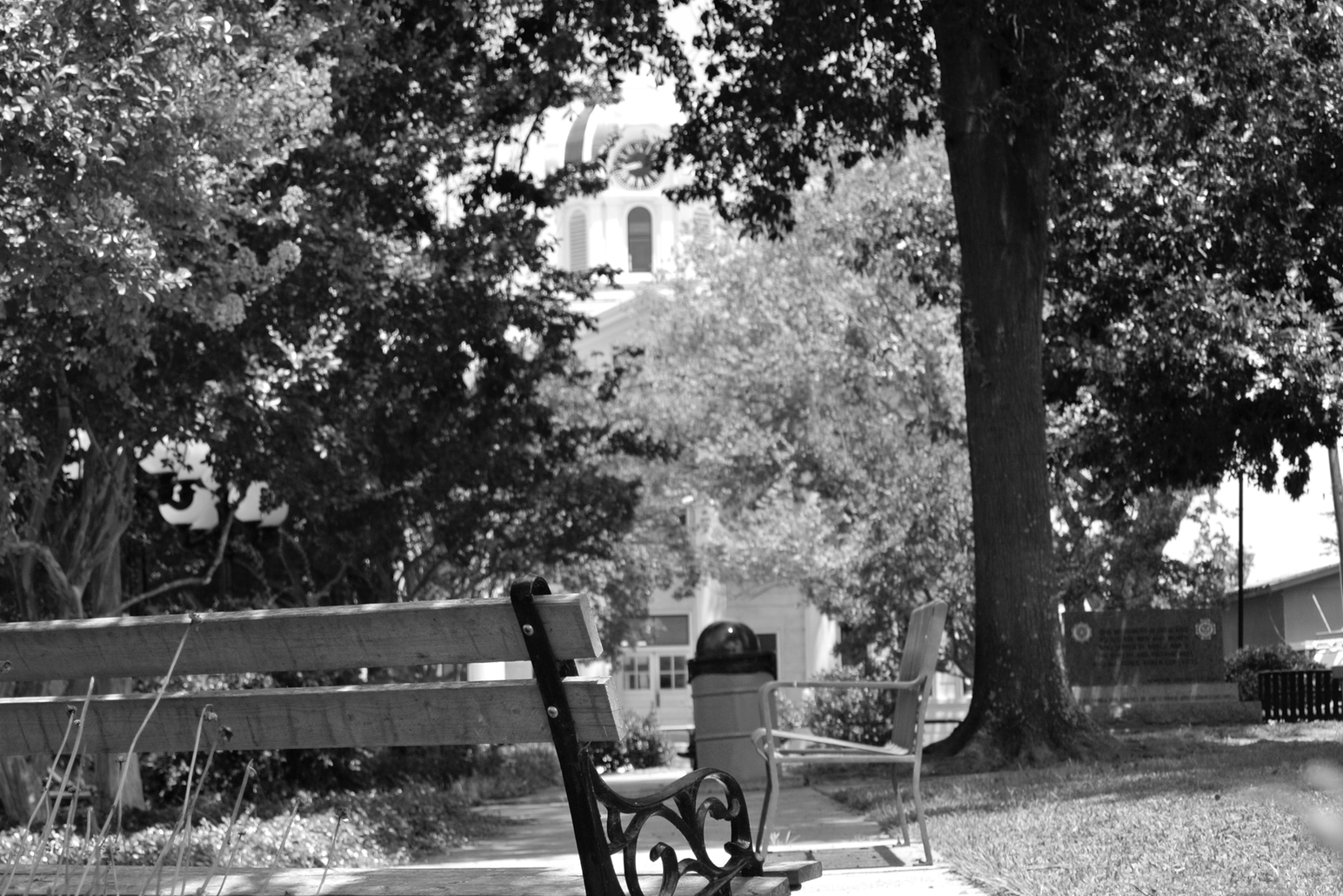 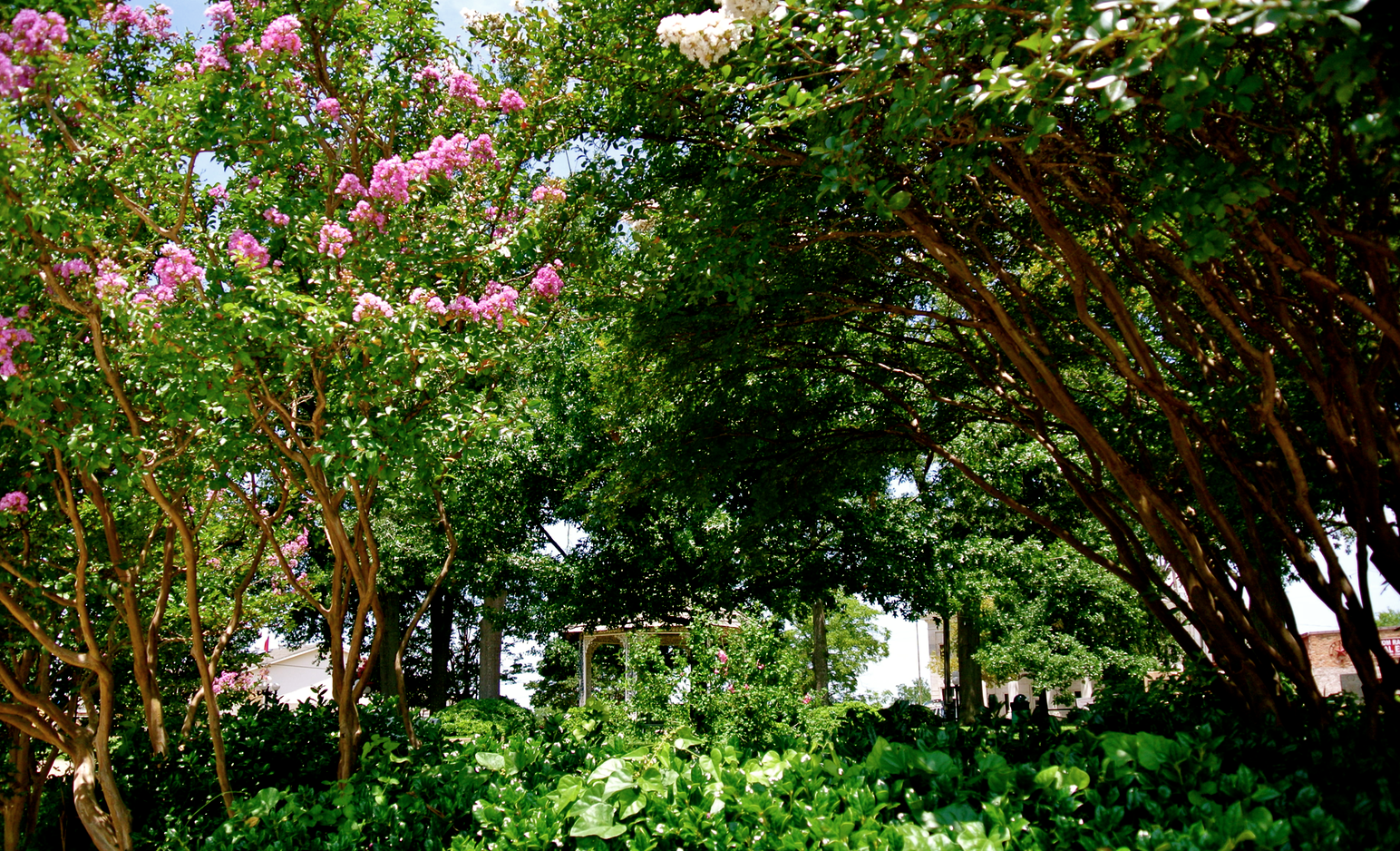 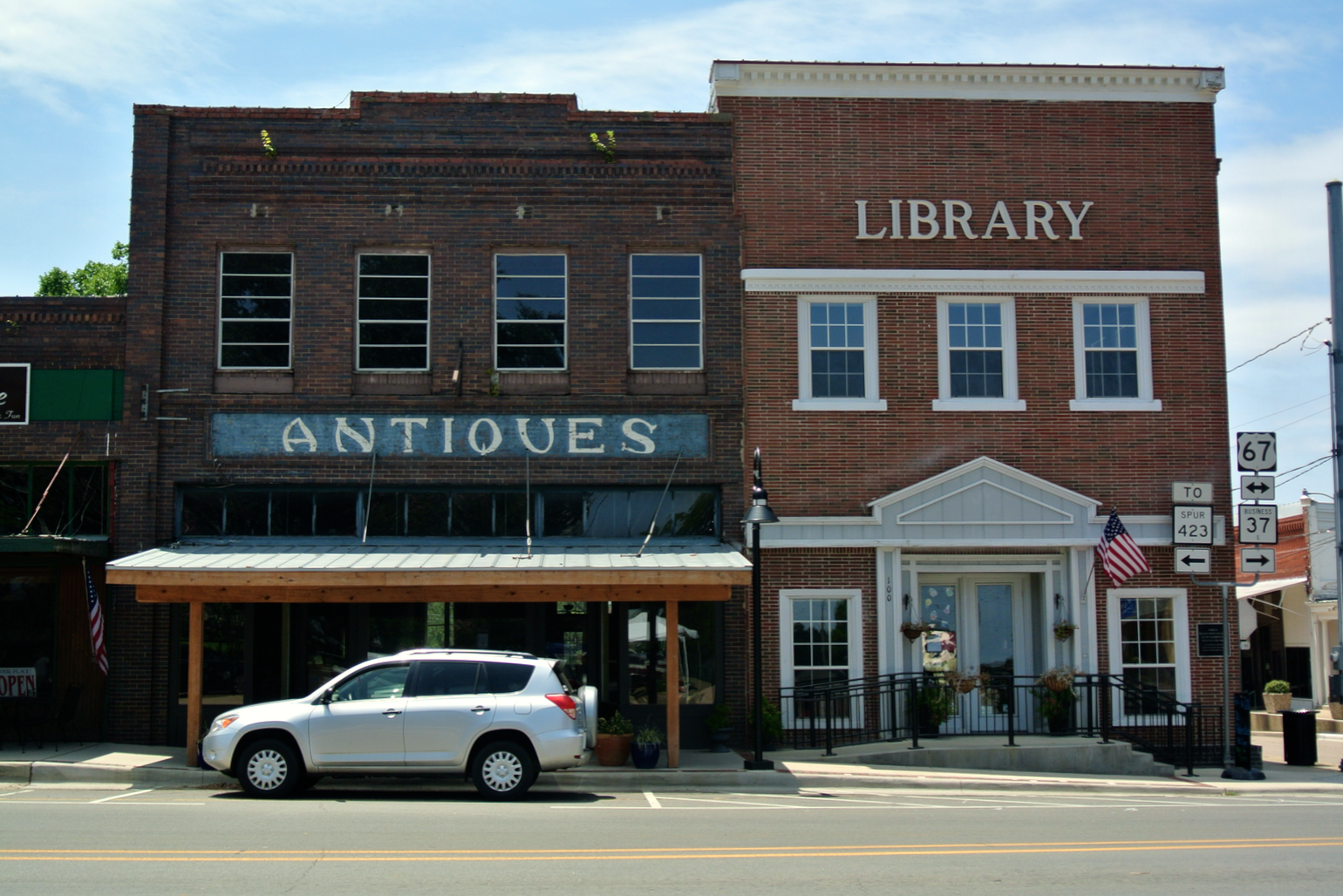 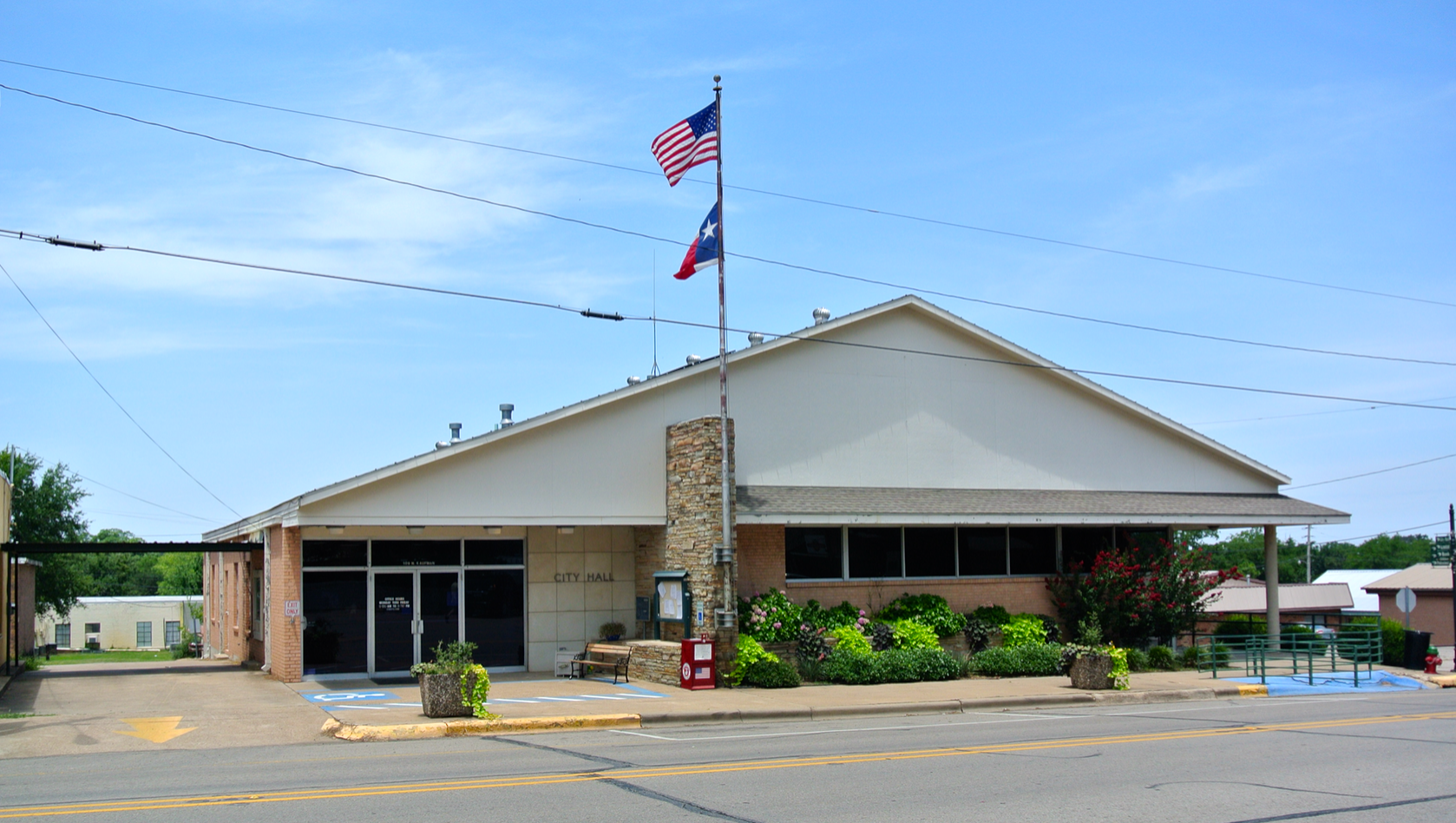 City Hall is across Kaufman Street from the courthouse/park.

“A Texas Treasure”, both the city and the courthouse