“Dimmit County was named for Philip Dimmitt, one of the framers of the Goliad Declaration of Independence; his name was misspelled when the county was formed. The county comprises 1,307 square miles of generally flat to rolling terrain vegetated with mesquite and small trees, scrub brush, cacti, and grasses. The elevation of the county ranges from approximately 500 to 800 feet.”

“Between the Texas Revolution and the Mexican War (1836–46), most of Dimmit County lay in the disputed area between the Rio Grande and the Nueces River. Since neither the Republic of Texas nor the Mexican government could establish control over this strip of contested land, known at the time as Wild Horse Desert or El Desierto Muerto (Dead Desert), it became a haven for desperate characters. This remained true for years after the Treaty of Guadalupe Hidalgo definitively assigned the Nueces Strip to Texas.”

“In 1858, Dimmit County was officially formed from parts of Bexar, Webb, Maverick, and Uvalde Counties. Dangers posed by outlaws and unfriendly Indians, however, deterred settlement in the county until after the Civil War. Dimmit County as it was found by early settlers was much different than it is today. Grasslands punctuated by clumps of mesquite, oak, and ash trees supported an abundance of wildlife, including buffalo, deer, turkeys, wild horses, panthers, and javelinas. Springs, bubbling up from a vast reservoir of underground water, fed into running streams that harbored giant catfish, crawfish, and mussels. As one visitor described it, the place in the mid-nineteenth century was “a poor man’s heaven.”"

“The first permanent settlement in Dimmit County, Carrizo Springs, was founded in 1865 by a group of fifteen families from Atascosa County. These early settlers were led by Levi English, a cattleman and frontiersman who, like some of the other settlers, was already familiar with the area from earlier visits. A second group of settlers from Goliad arrived at Carrizo Springs about two years later. The first years of settlement were difficult. Most of the early residents of the county lived in primitive jacals or dugouts, and hostile Indians and outlaws often disturbed the peace.” 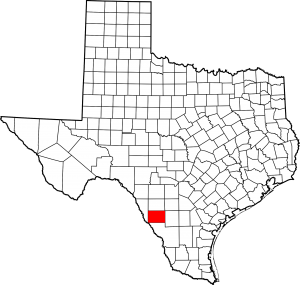 “The county was formally organized in 1880 with Carrizo Springs as county seat. That same year, Levi English donated land for a county courthouse, schools, and churches in the town. The Carrizo Springs Javelin, the county’s only newspaper, was established in 1884. By 1885 the county seat was described as a “flourishing town” with two churches, a grocery, a livery stable, and a harness and boot shop. Unlike most frontier towns, Carrizo Springs had no saloon.”

“At the turn of the century cattle ranching completely dominated Dimmit County’s economy and set the tone for its culture. There were 105 farms and ranches in the county in 1900, comprising 904,000 acres. Though some ranchers set aside a few acres for such crops as wheat, corn, oats,and peanuts, the vast majority of the land was devoted to raising cattle. No manufacturing establishments were reported.”

“The early settlers who established ranches during the nineteenth century adapted their operations to the limited rainfall in Dimmit County. Even gardens were rare in the first years of the county’s settlement. Though some experimented with irrigating small plots of land, few attempted to cultivate large fields. … Water was the missing ingredient. The editor of the Carrizo Springs Javelin wrote in 1899, “Our soil only needs water to make it the most productive in the state.”"

“The first use of artesian water in Dimmit County is attributed to D. C. Frazier, who drilled a well near Carrizo Springs in 1884. Frazier’s well spouted forty gallons of water a minute, which he used for his household and for a small irrigation project. … By 1900 about twenty-five artesian wells were flowing in the Carrizo Springs area, but most of the water was wasted, and very little was used for irrigation. “Colonel” J. S. Taylor, an audacious land developer who had already helped to establish the town of Del Mar, California, was the first to use irrigation on a large scale in Dimmit County.”

“Irrigation and the long growing season transformed Dimmit County as it became known as part of the Texas Winter Garden Region, one of the most prolific vegetable-growing areas in the country. Though onions were the county’s biggest cash crop, by 1920 farmers also planted spinach (called “green gold” by some of the farmers) and strawberries; meanwhile, orchards of figs, peaches, plums, and citrus fruits were also being harvested or planted.”

“In the 1920s, however, most of the county’s artesian wells had stopped flowing and many of the county’s creeks and springs had gone dry. Farmers had to install pumps to get their water out of the ground, and the added expense, combined with the onset of the depression, drove many farms out of production during the late 1920s. The agricultural boomtown of Palm, for example, faded away after the irrigation pumps burned up, and the surrounding land was abandoned.”

“The days of plentiful water were over. Nevertheless, after the hard days of the depression were over, irrigation enabled farmers to put more acres into production than ever before. In 1944 almost 15,000 acres was harvested in Dimmit County, nearly 30 percent more than in 1939; in 1950 almost 19,000 acres was harvested. By 1956, 40,000 acres was irrigated for crops, particularly vegetables. Onions, carrots, lettuce, and tomatoes were among the county’s most important crops, along with cantaloupes, watermelons, squash, and radishes”

“Though Dimmit County continued to be an important source of the country’s vegetable supply, production dropped over the ensuing decades. By 1965 only about 15,000 acres was being irrigated.”

“In 1990, Dimmit County had a population of 10,433. Most of the towns that had appeared during the agricultural boom of the early twentieth century had severely declined or disappeared altogether, however, and the residents were increasingly concentrated in Asherton and Carrizo Springs.”

I was the guest of Carrizo Springs and Dimmit County on August 11, 2014. 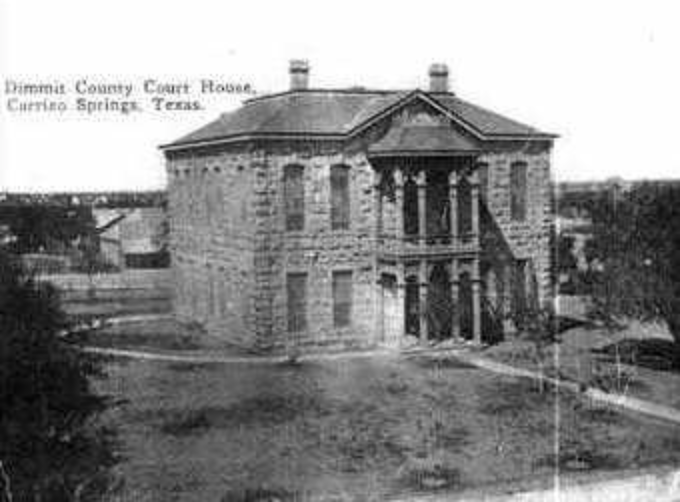 When the county first began recruiting plans for the design of their courthouse, they looked into the work of Alfred Giles. He was a notable architect who would later go on to design the Goliad and Caldwell County Courthouses, and was presumed to be responsible for the Presidio County Courthouse in Marfa as well. That was two years later.

Giles’ proposed design was ultimately too costly, and Dimmit County went with a San Antonio firm called J.C. Breeding & Sons. By the time it was finished, however, it was plainly obvious that Breeding had been influenced by the Giles plan. This was never exactly proven, but Giles did sue Dimmit County over the matter. They settled out of court for $400.00.

Henry T. Phelps, also of San Antonio, was chosen to expand the 1884 building in the 20s.

Phelps’ design did away with many of the past building’s features, but the “center of the rear of the building” and “a portion of the wall inside the recessed front porch” remain.

The north and south side of the building were elongated, the entrance was severely renovated, and the mansard roof and Italianate influences were removed. This 1927 design is what remains on the Carrizo Springs square today. It went through a THC restoration project in 2002. 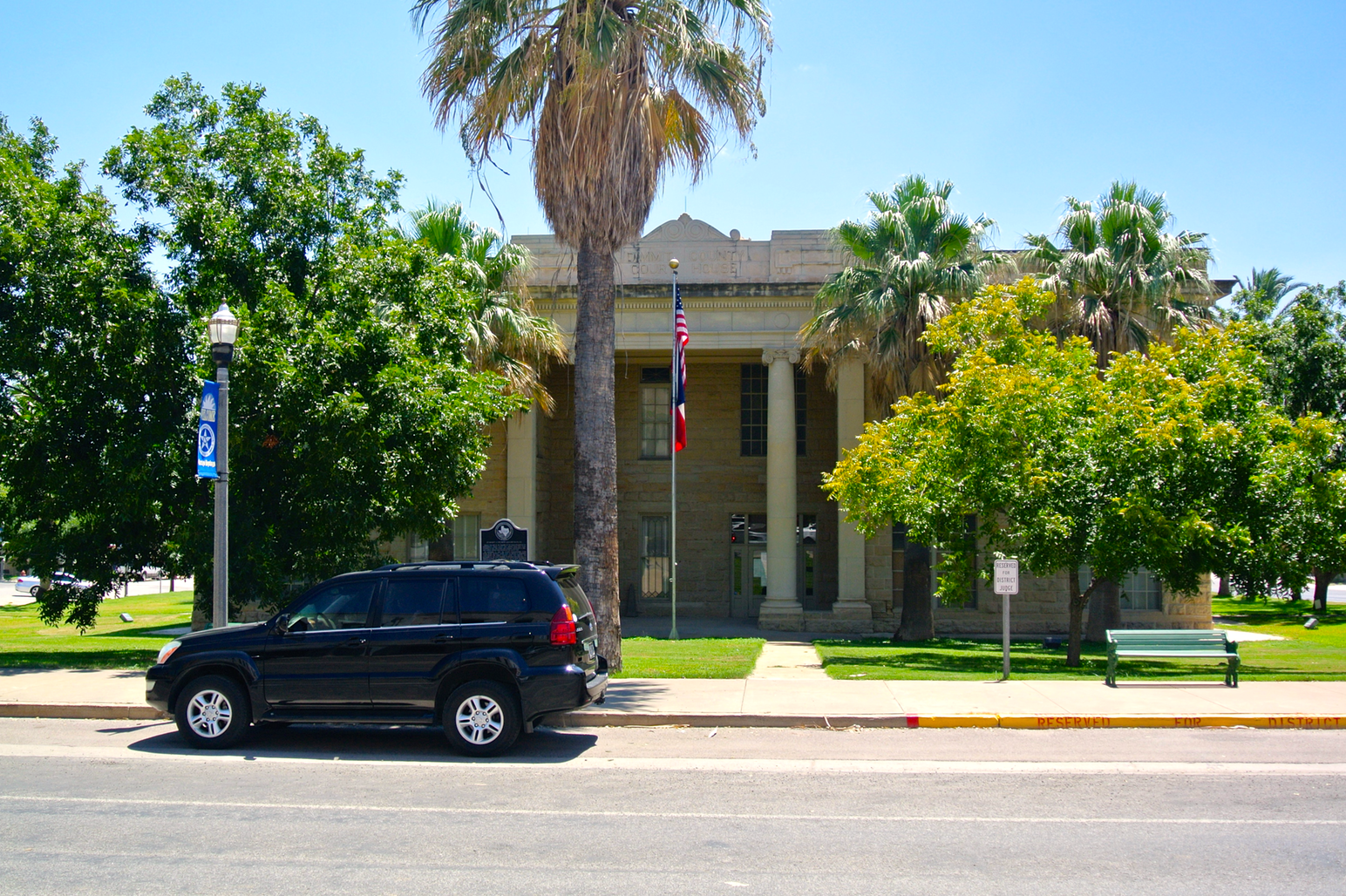 As you can see in the 1939 photograph above, the front entrance of the Dimmit County Courthouse has always been heavily shaded. 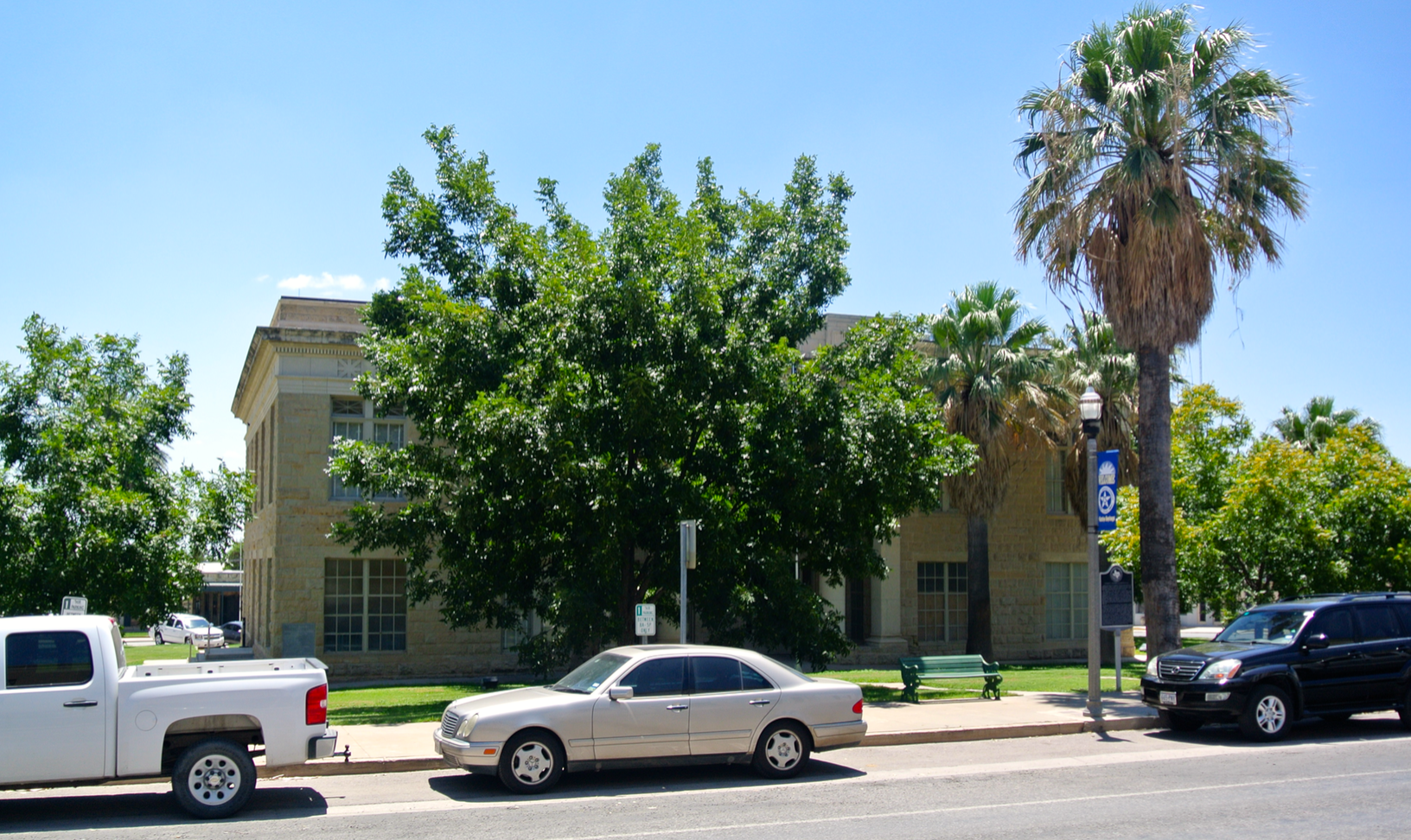 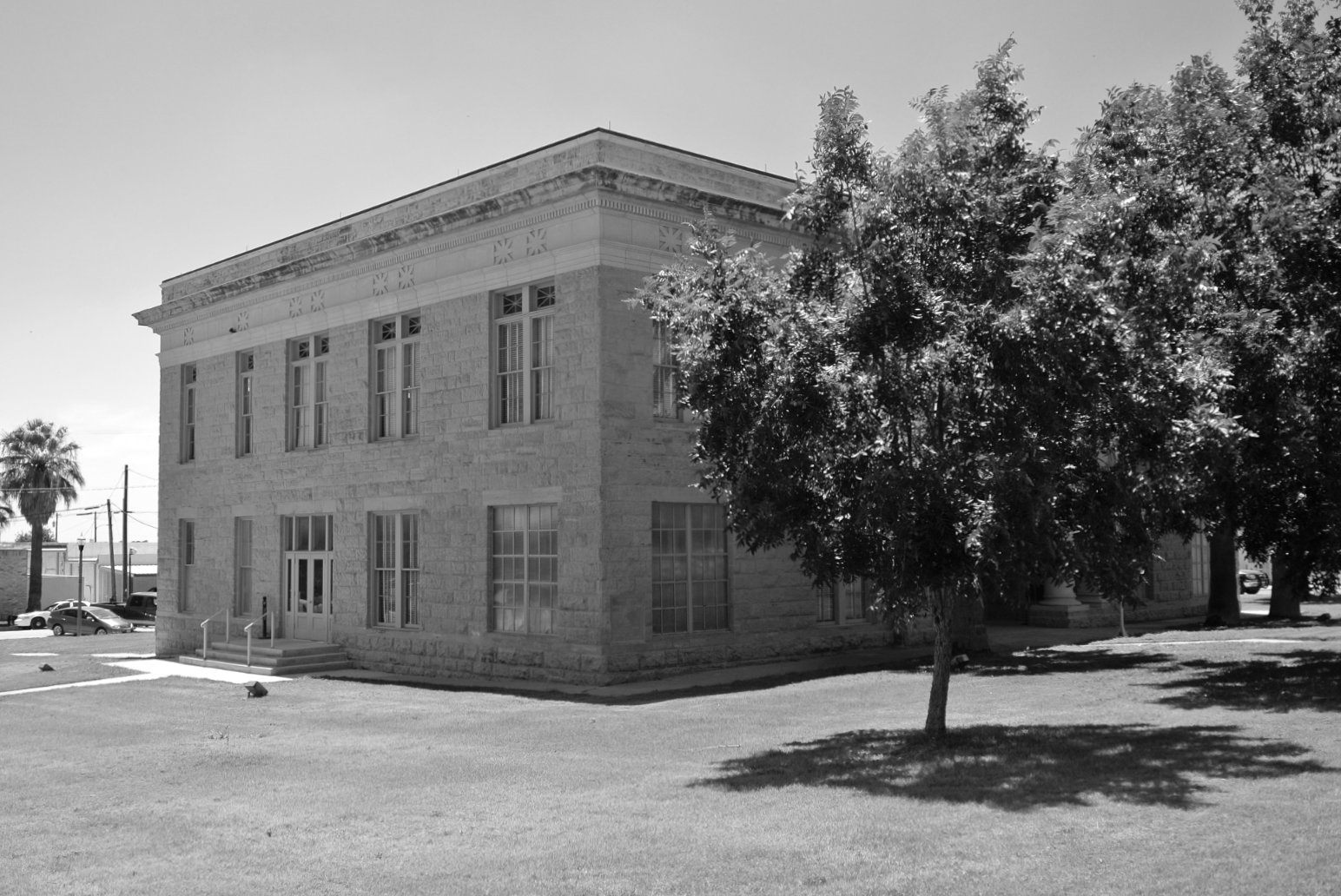 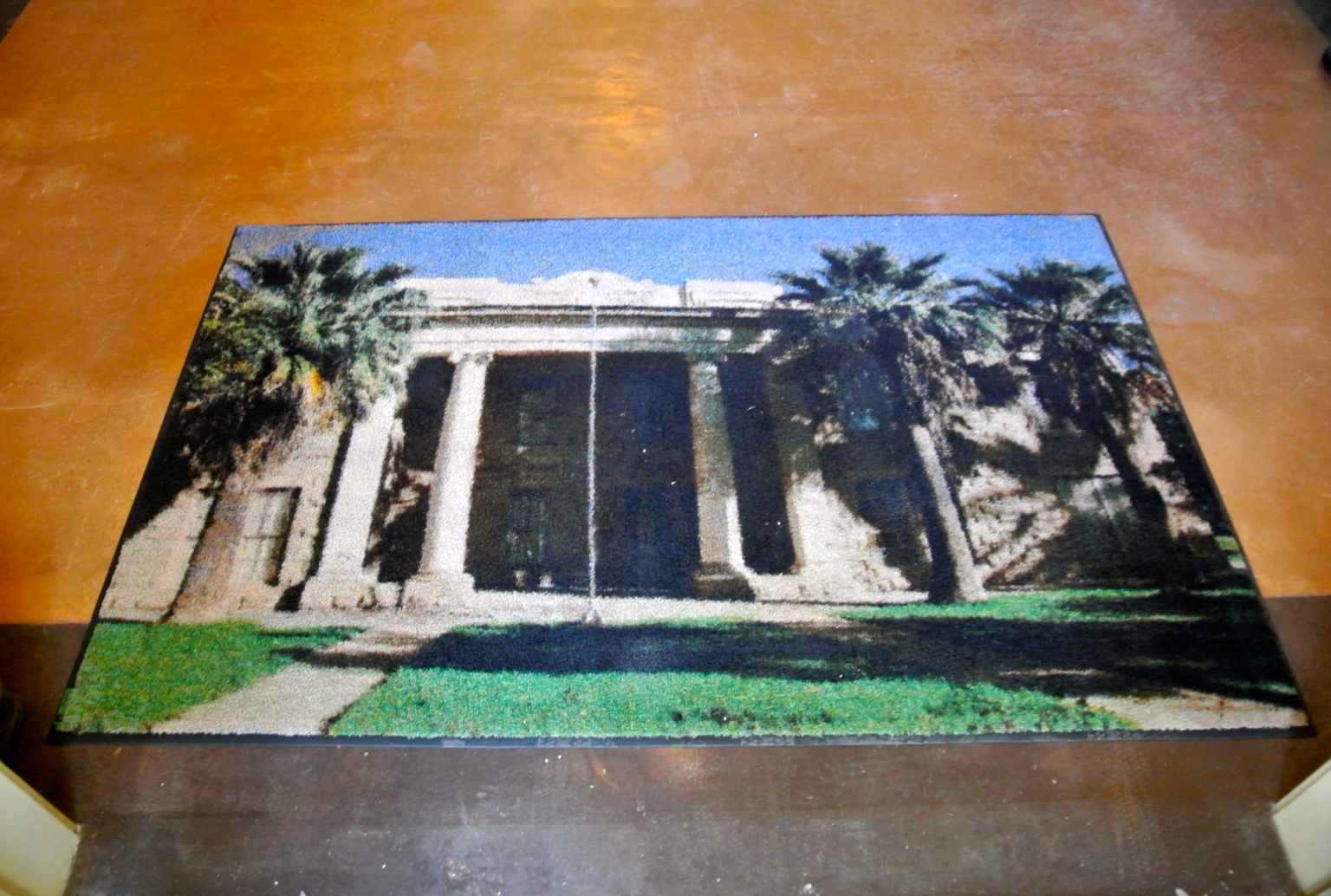 Walking through the front door, I found a first: a rug with the courthouse’s picture on it. Why not? 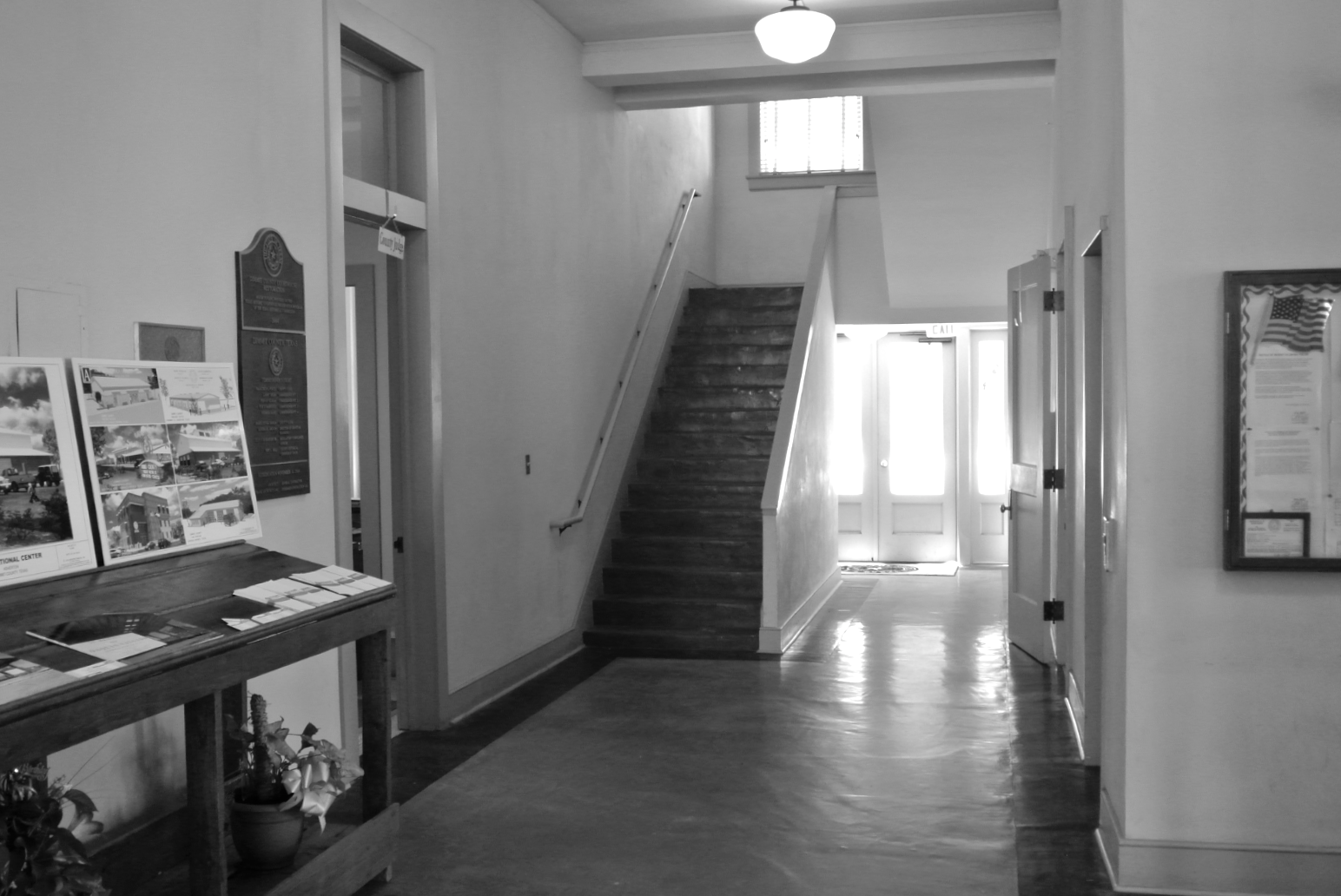 As I mentioned above, the THC restored the building in 2002. It looks good. 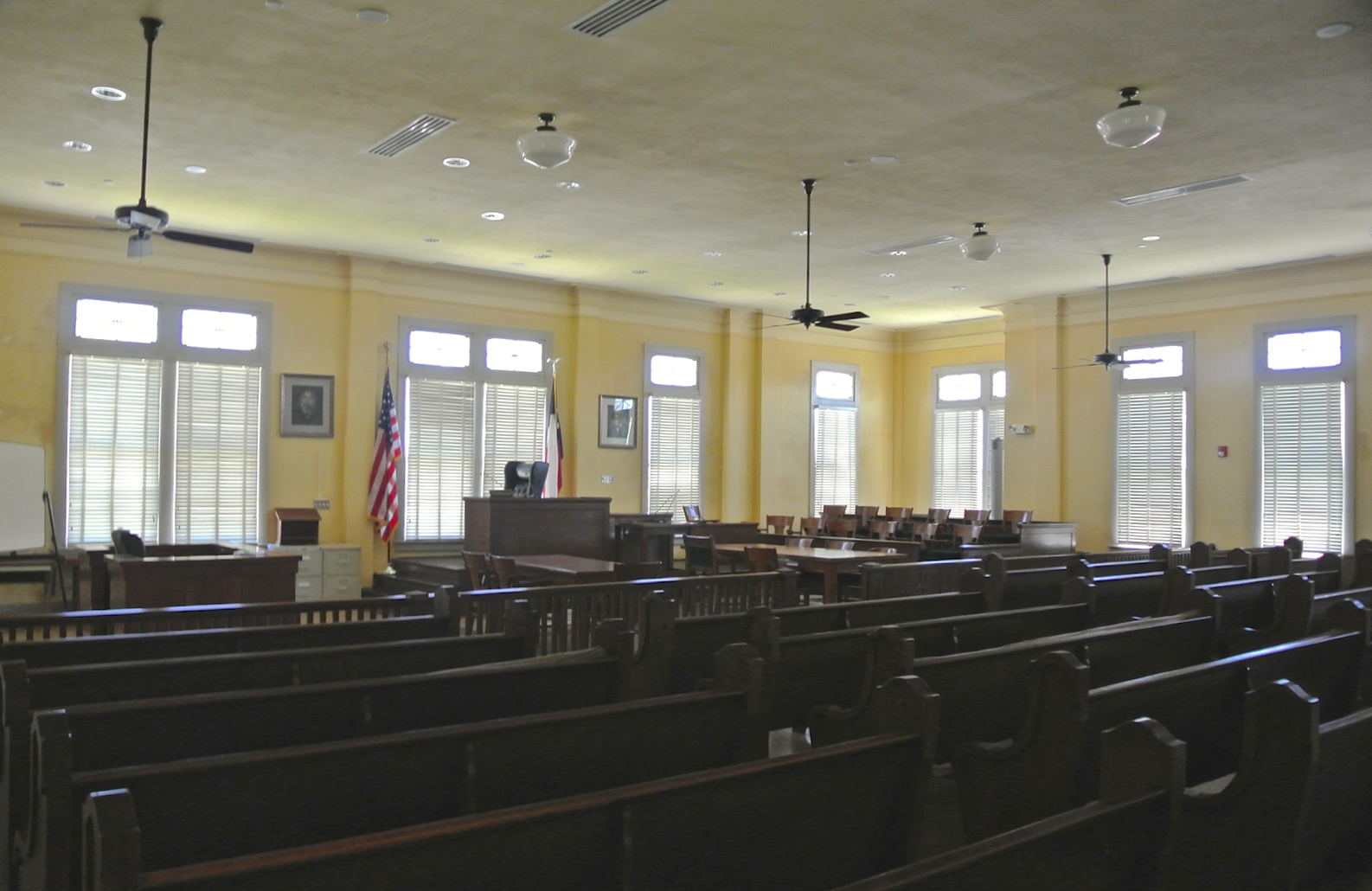 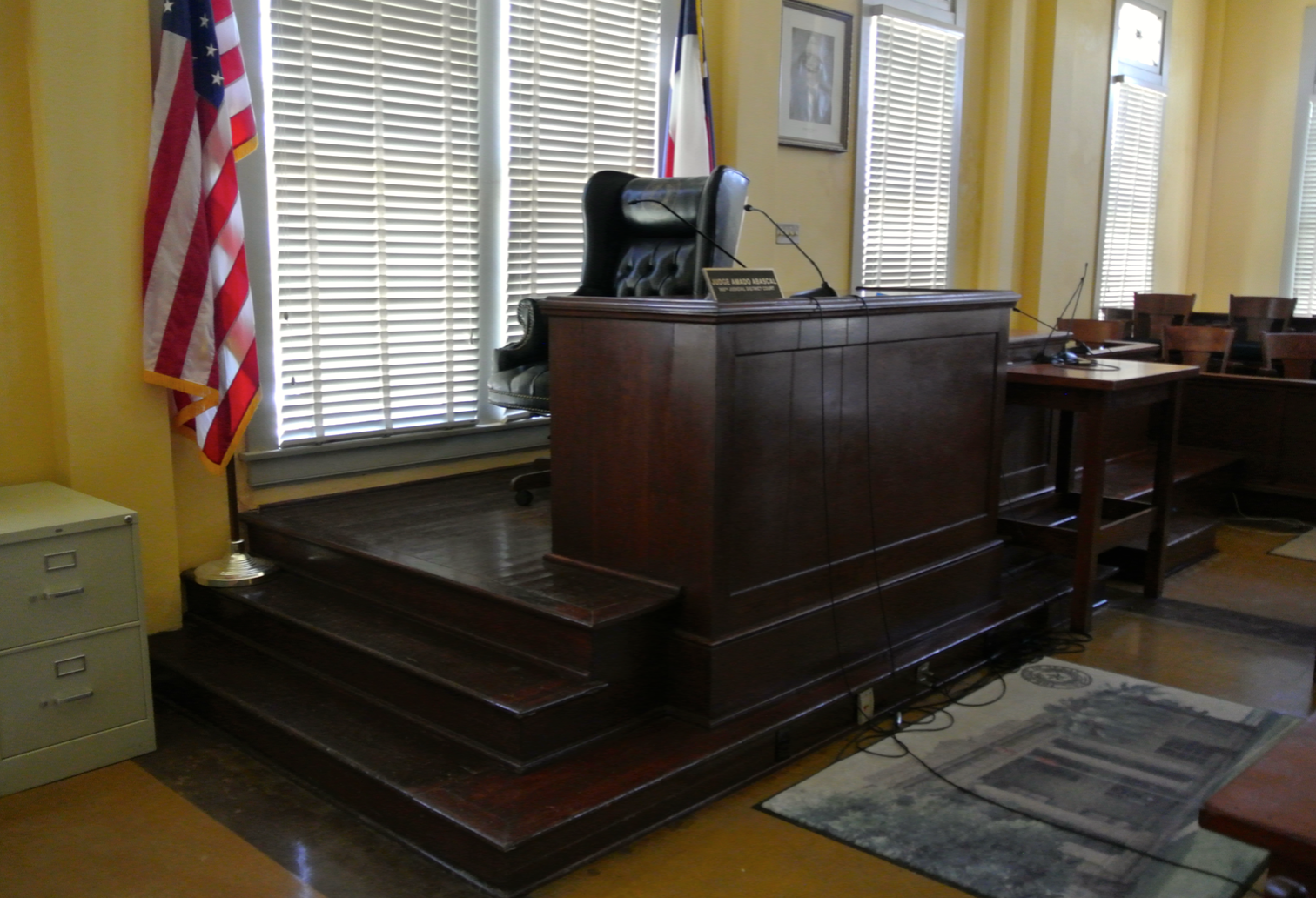 There’s another one of those rugs in the courtroom, as you can see here. 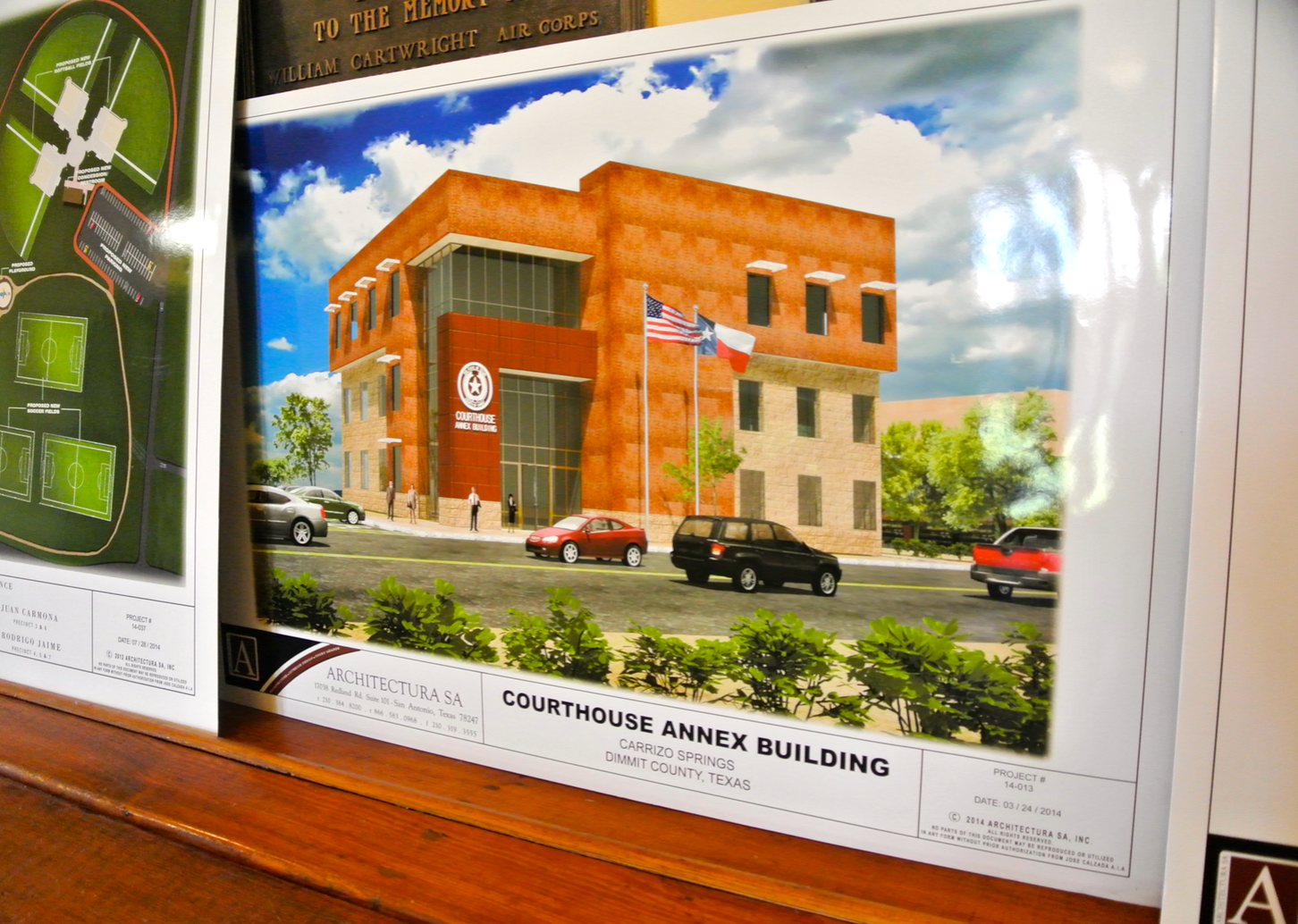 As of August 2014, Dimmit County was planning a new annex building, courtesy of the San Antonio-based firm: “Architectura SA”. The county website has a video rendering of the future annex, that you can watch here.

As of February 2017, I understand it is still under construction, but nearing completion. 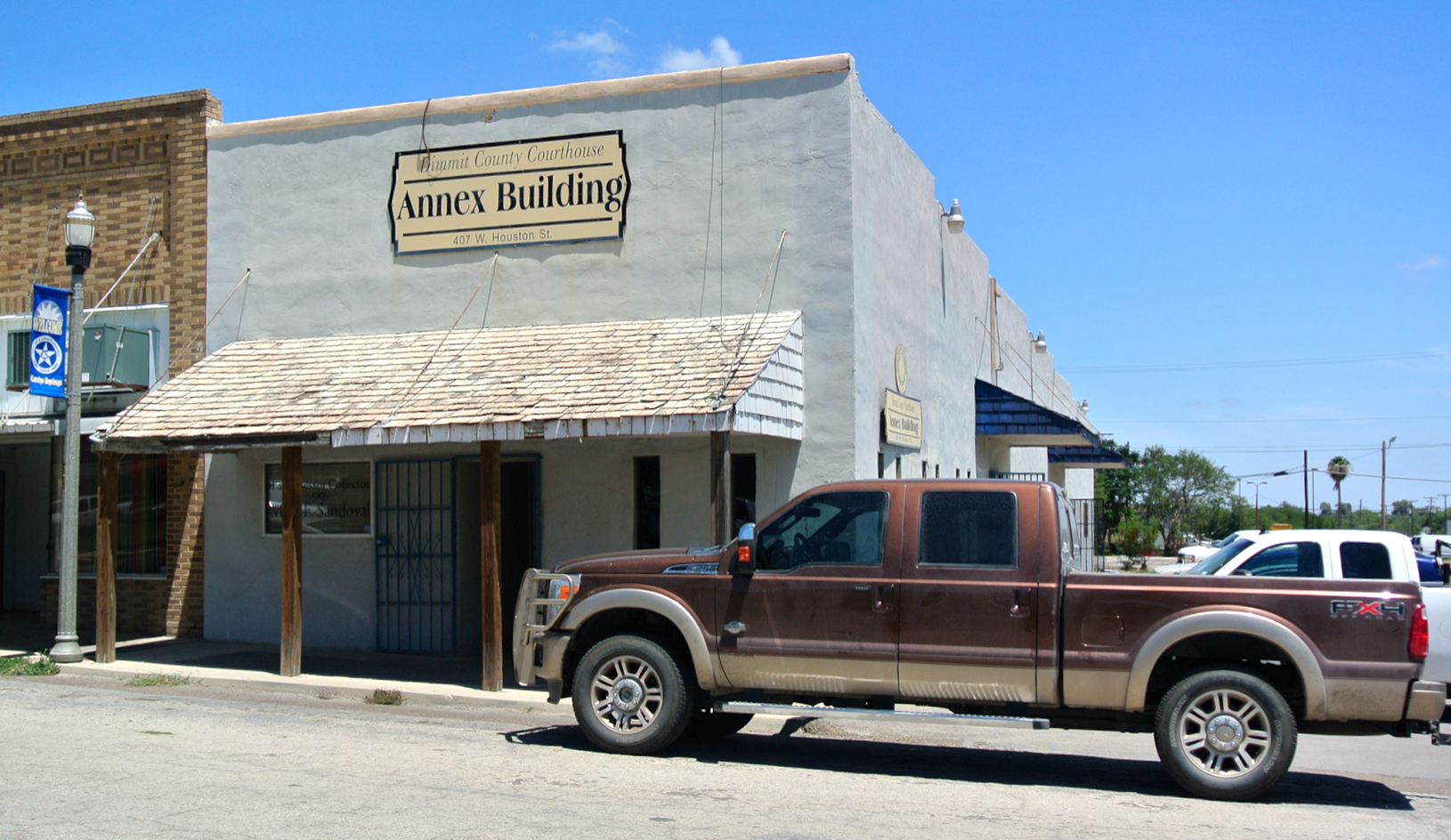 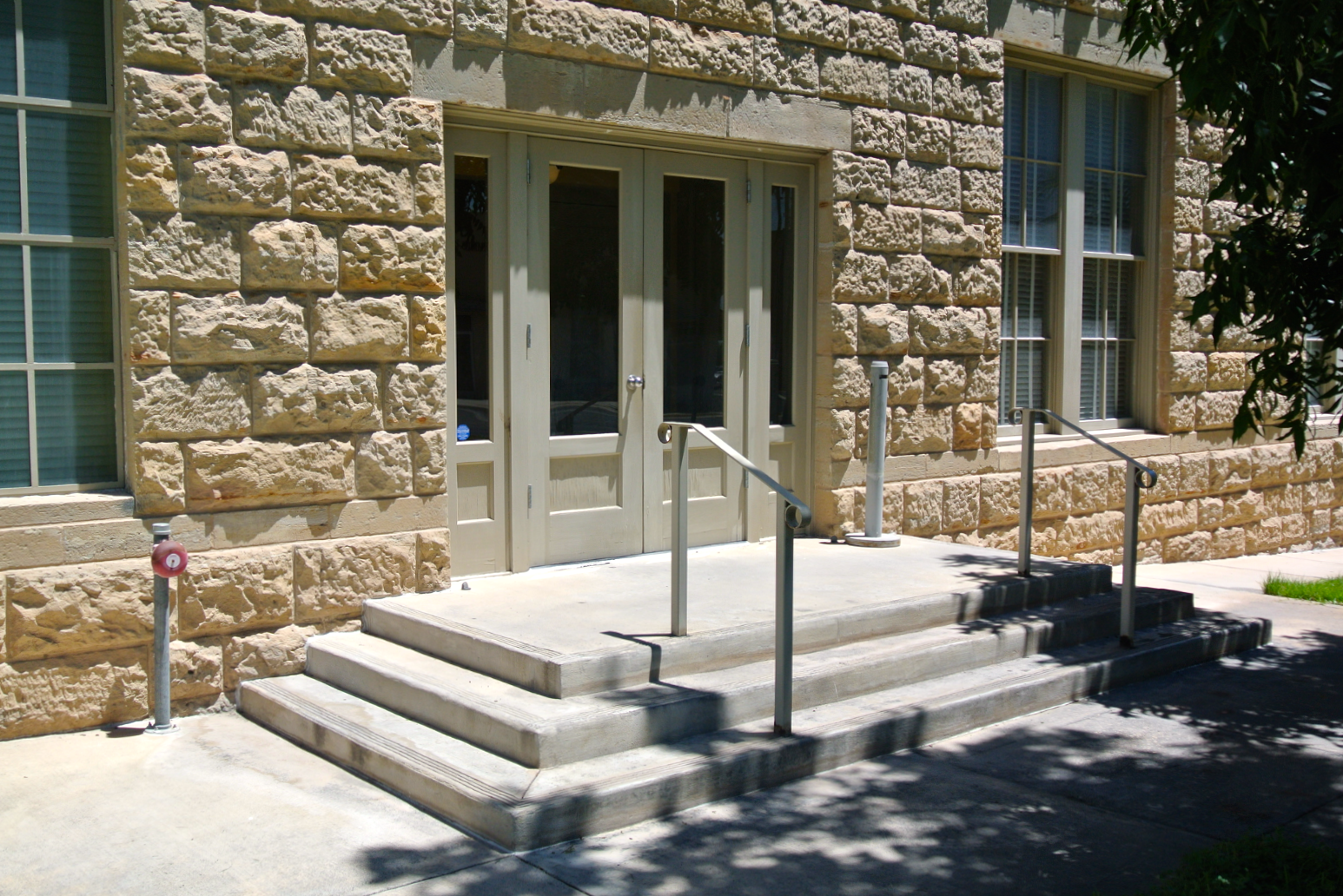 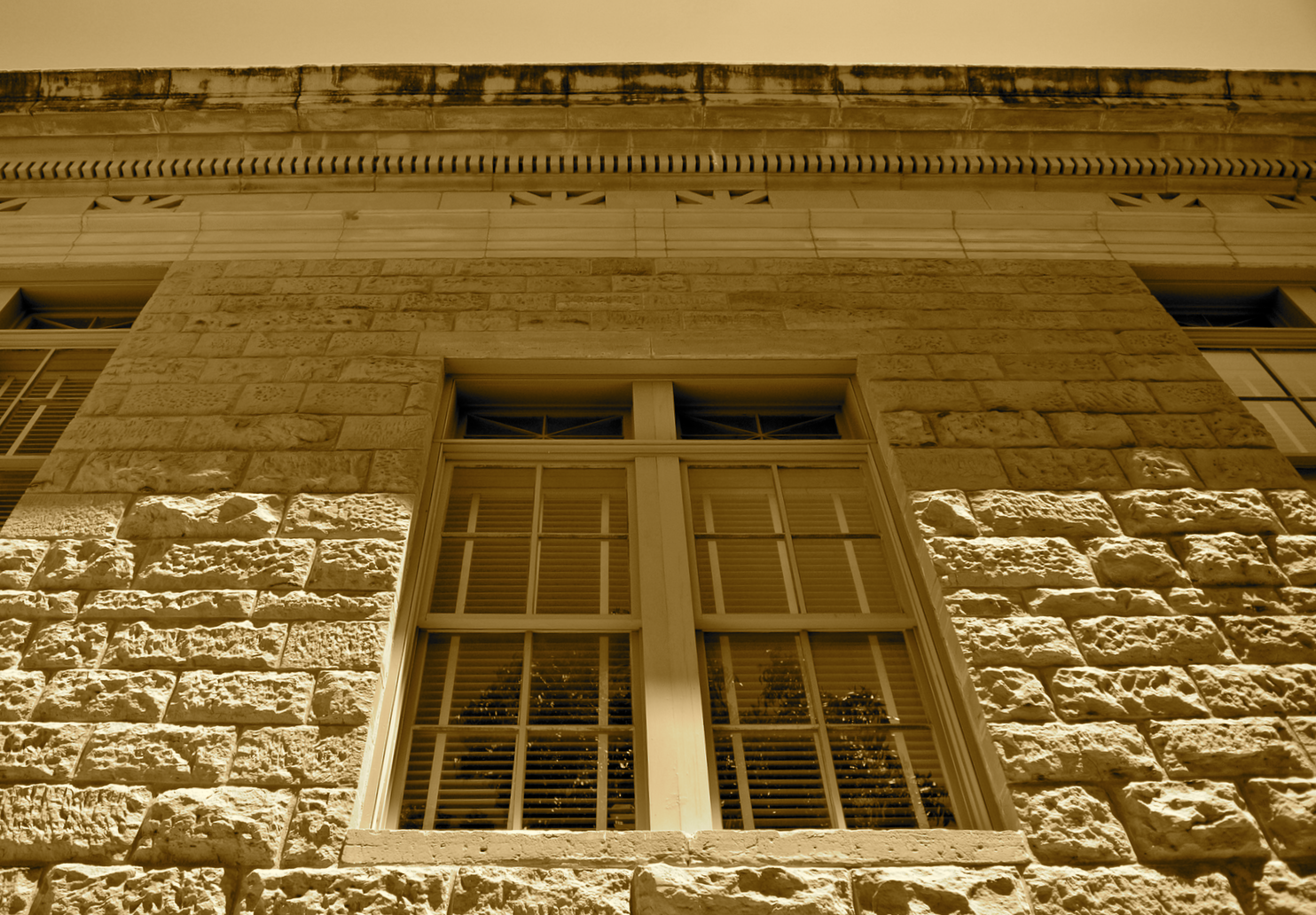 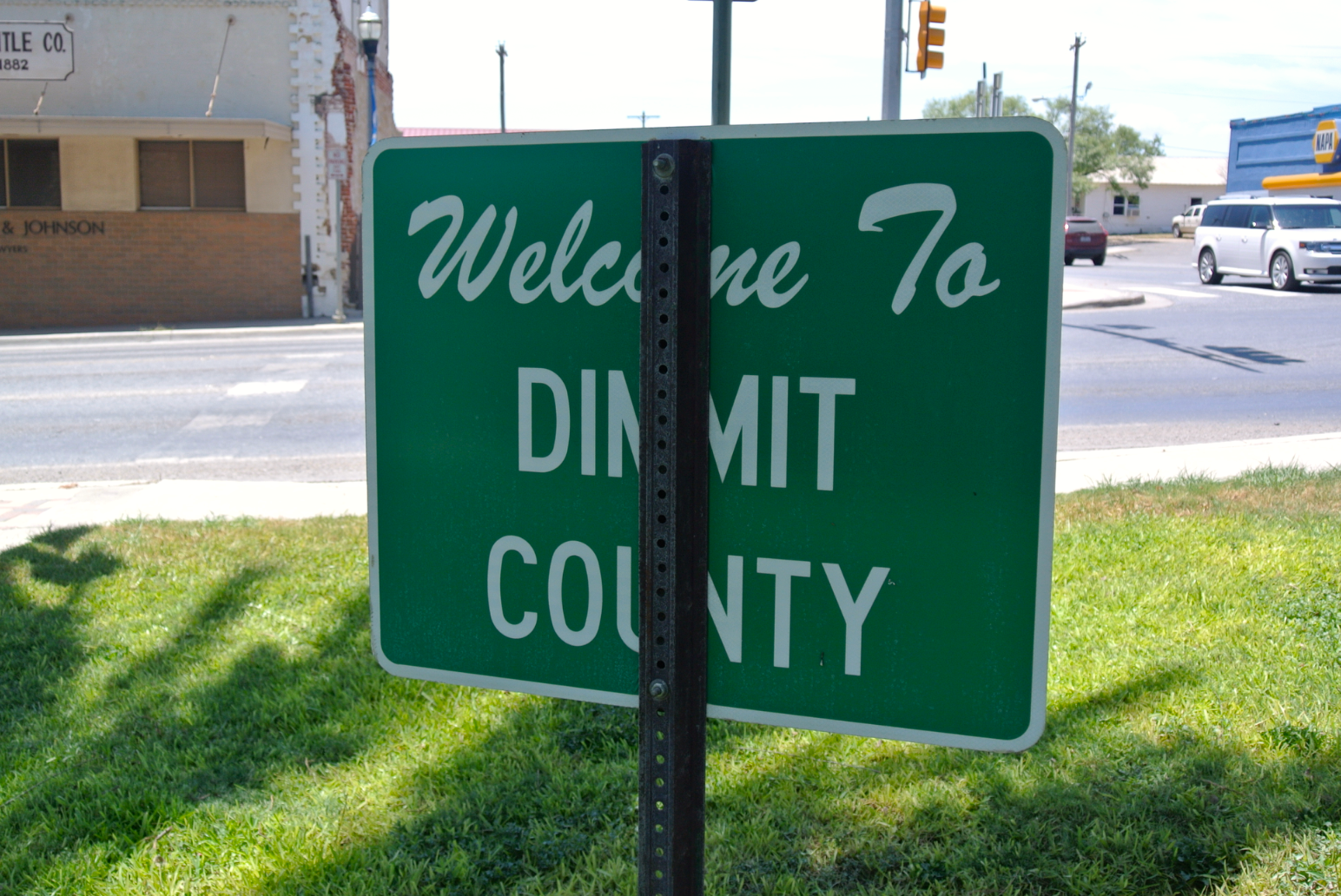 This message is not on both sides, so you’d think it wouldn’t be so obscured. You can find this sign just west of the courthouse. 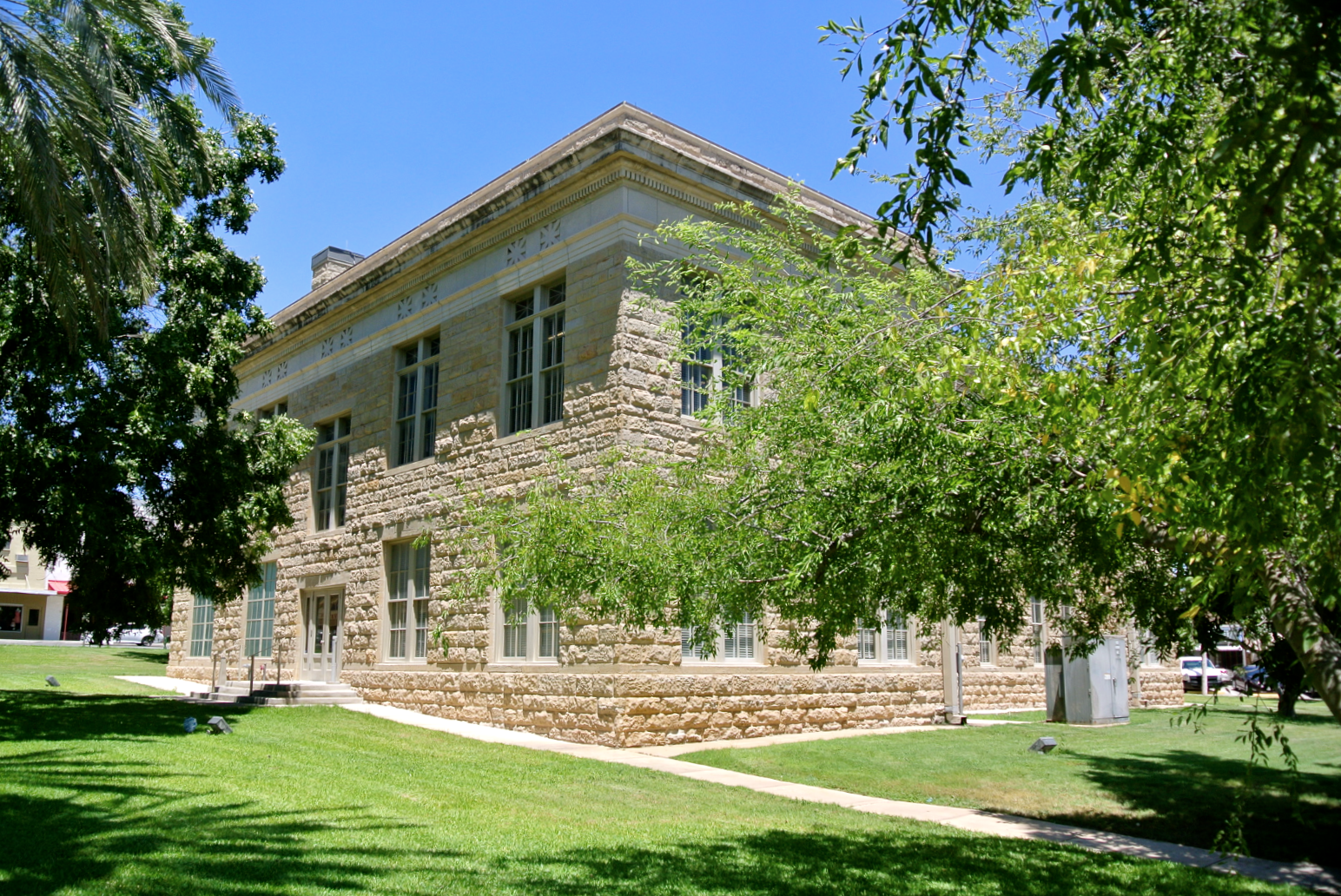 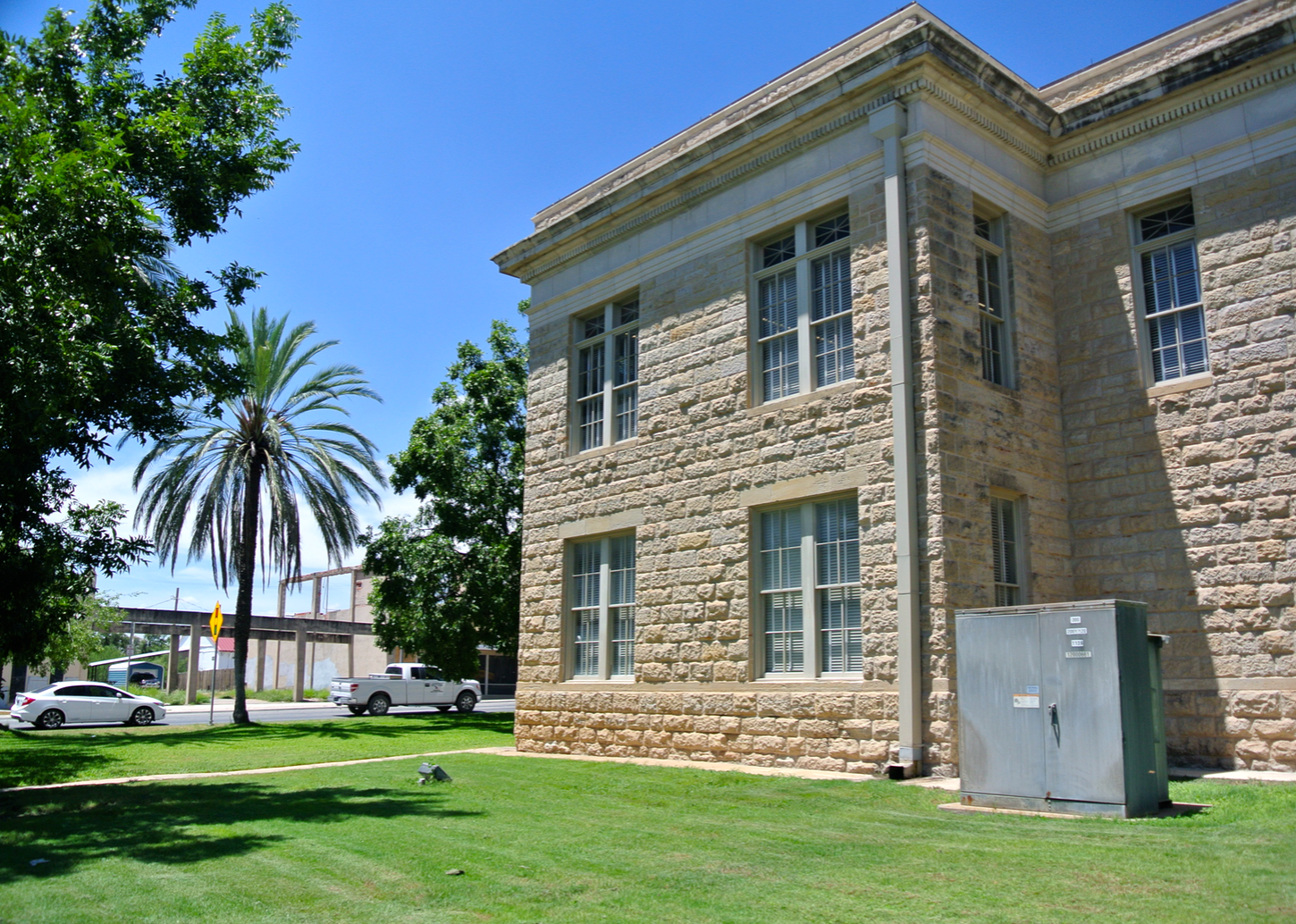 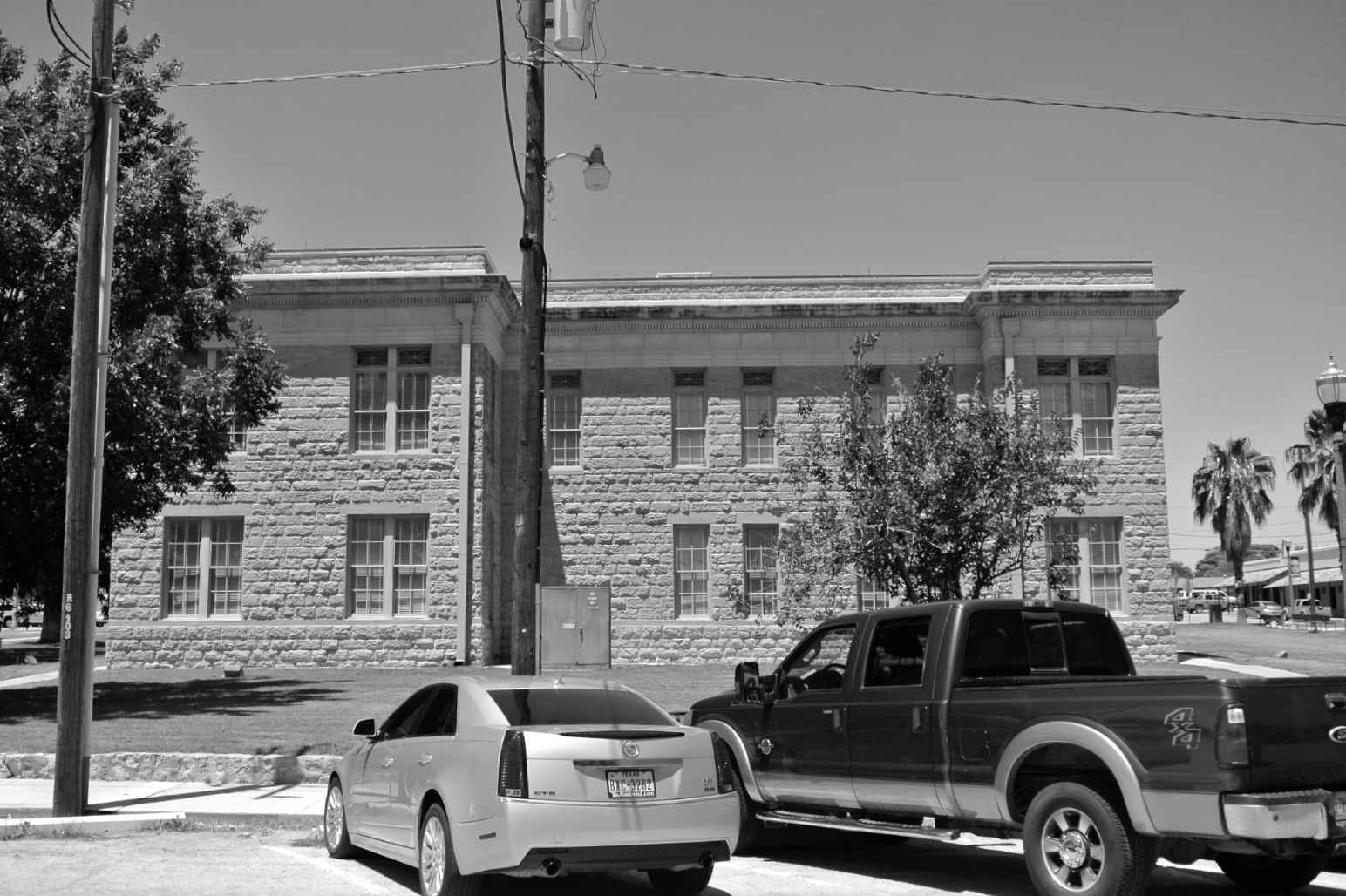 There’s no entrance to be found in the back. 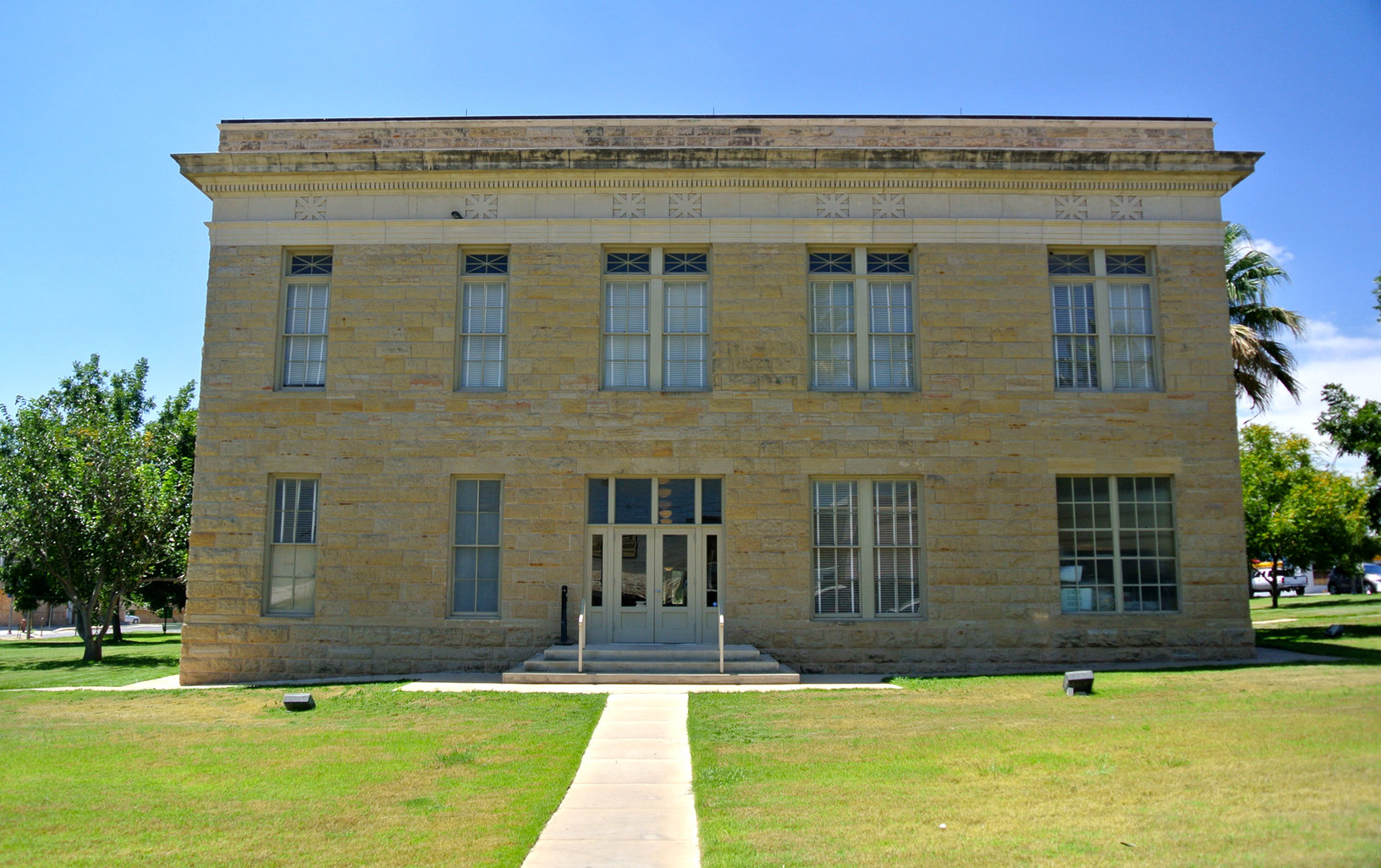 This is the northern façade, facing slightly northeast on Houston Street. 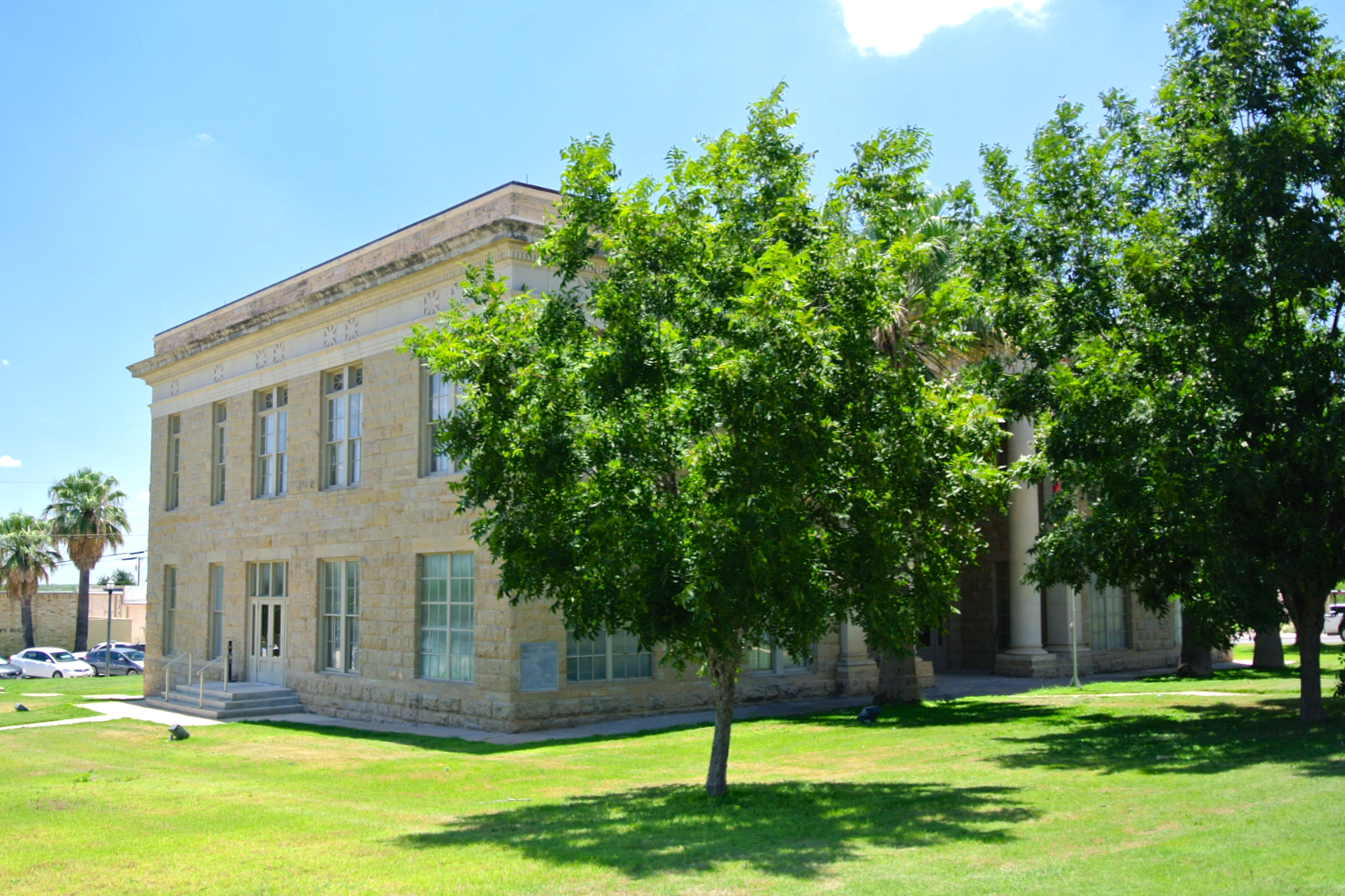 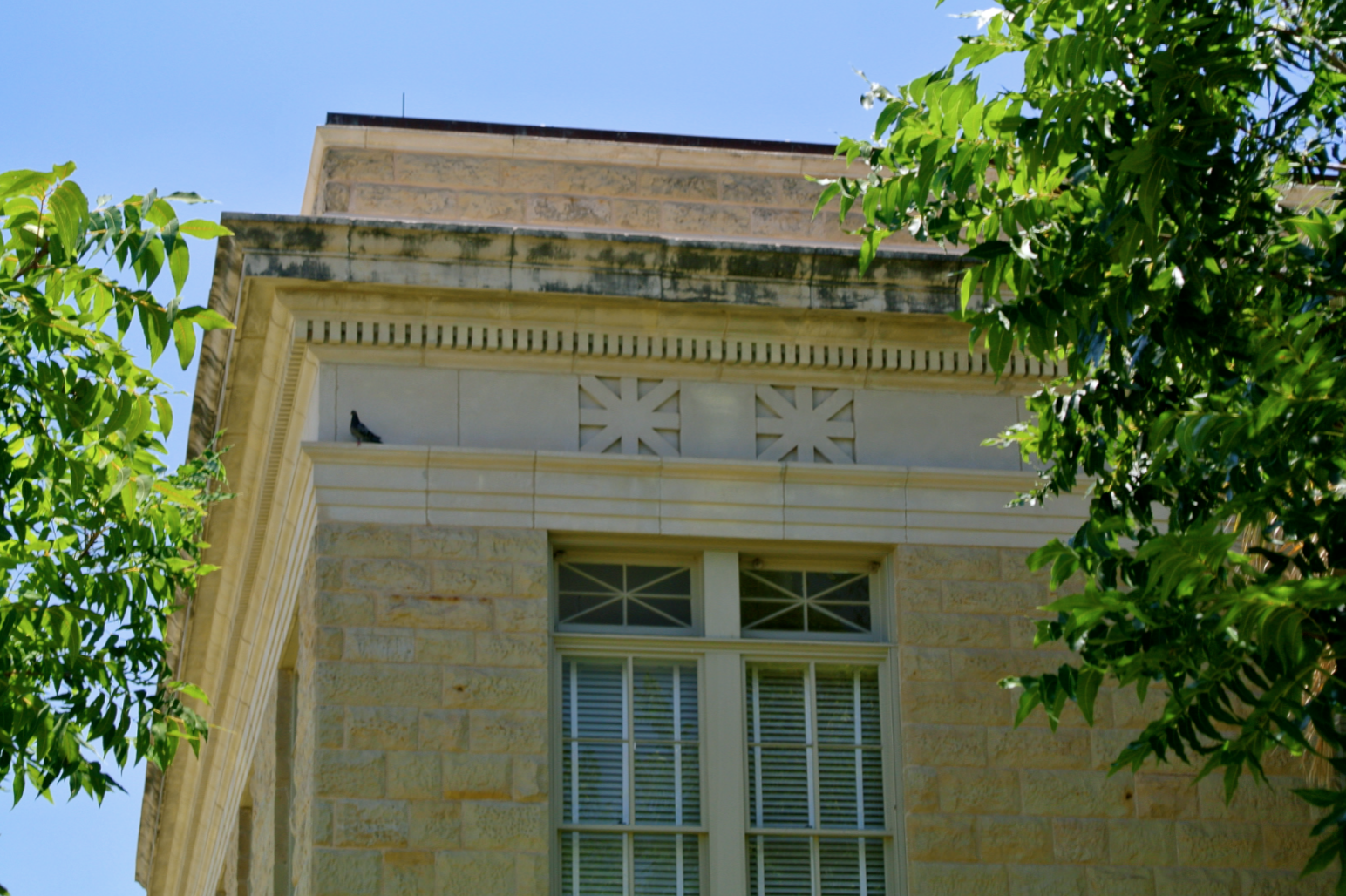 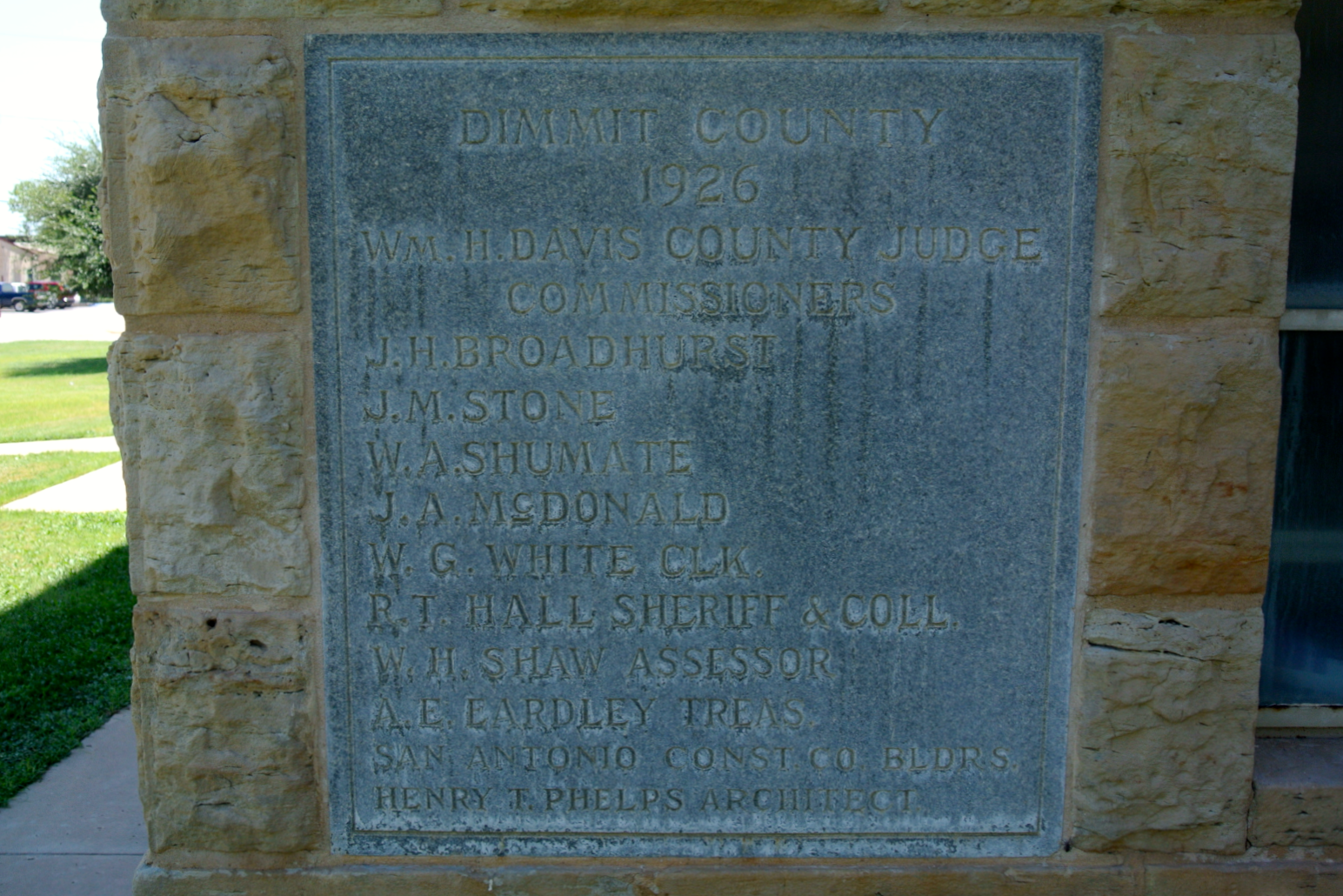 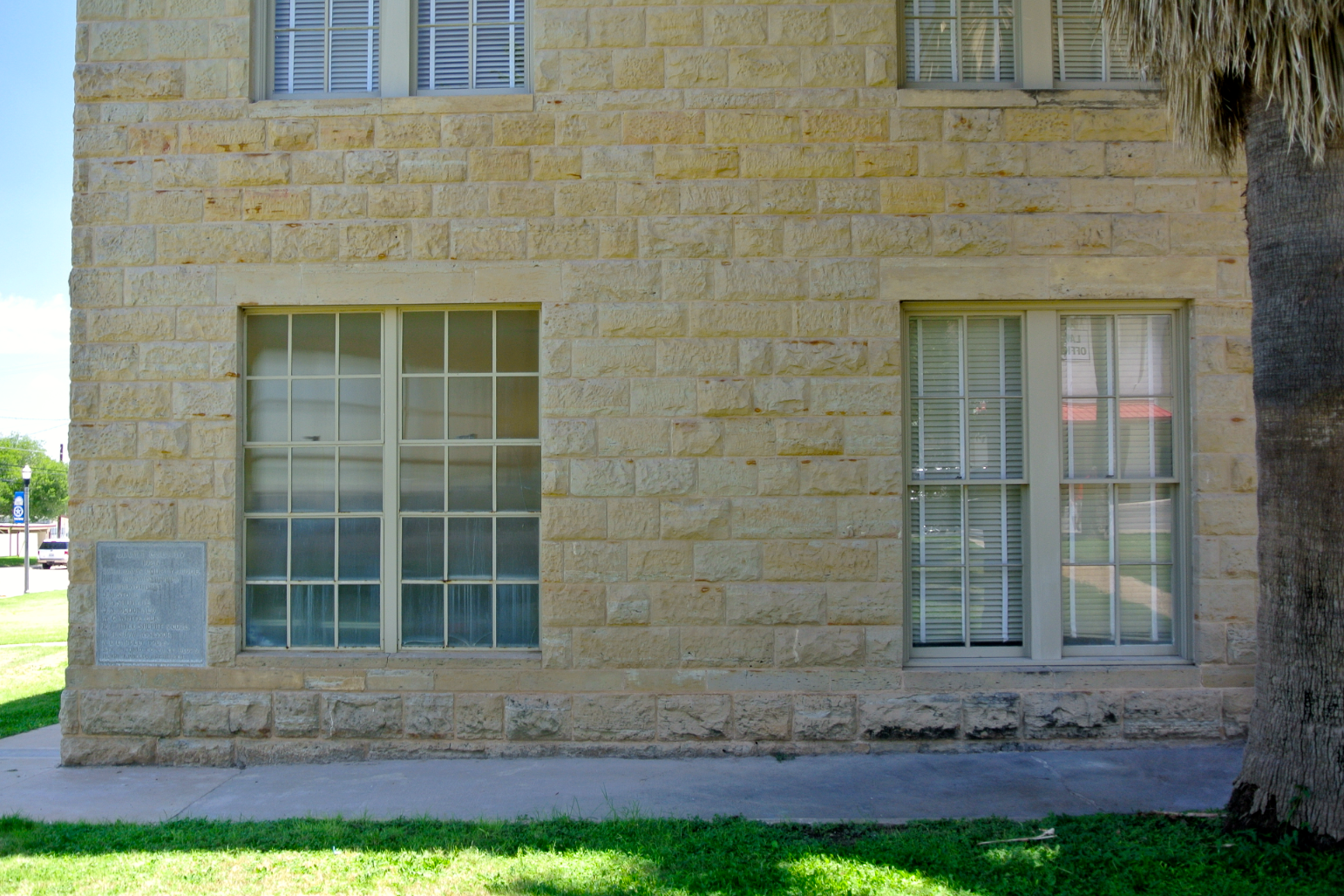 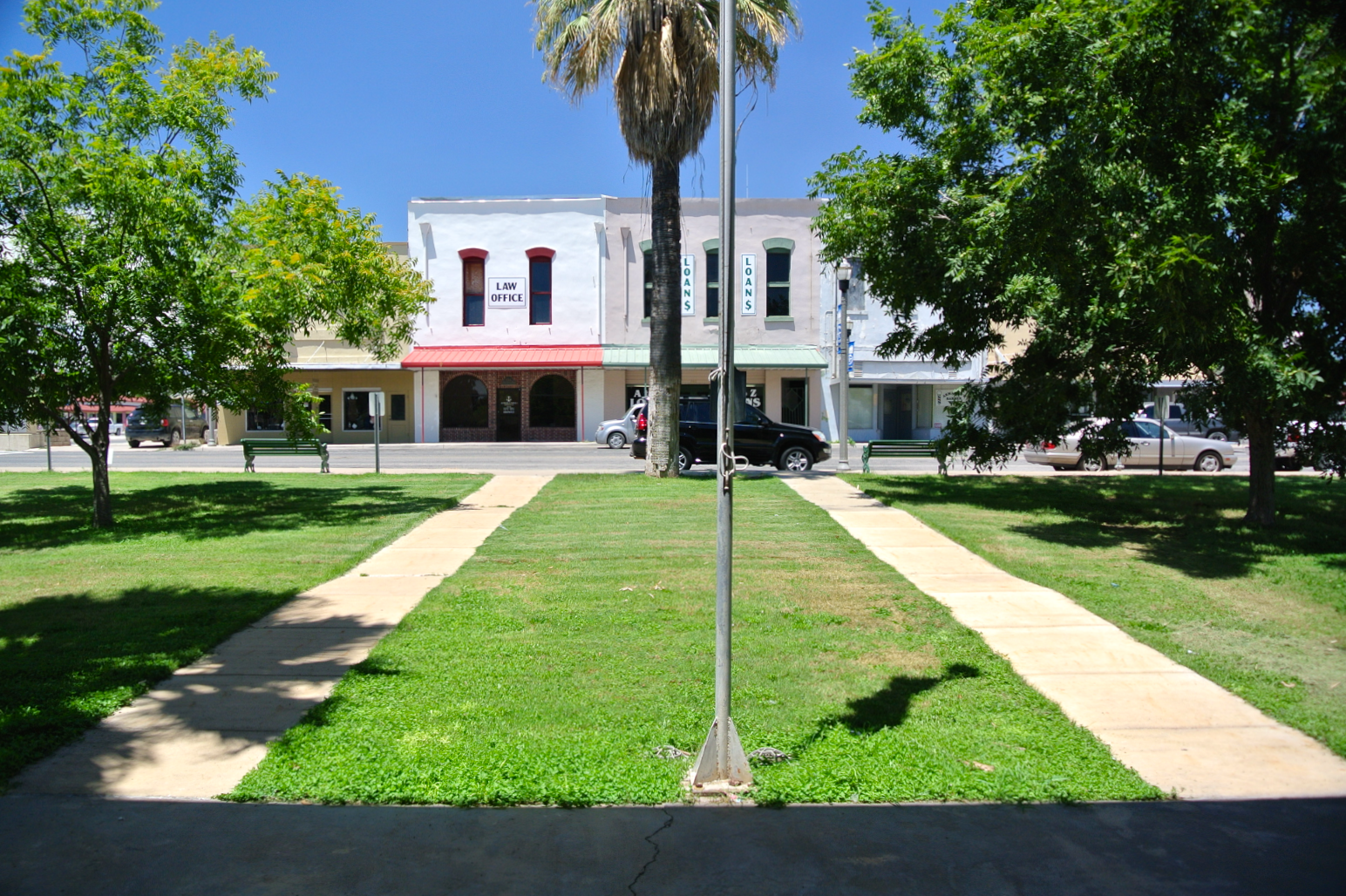 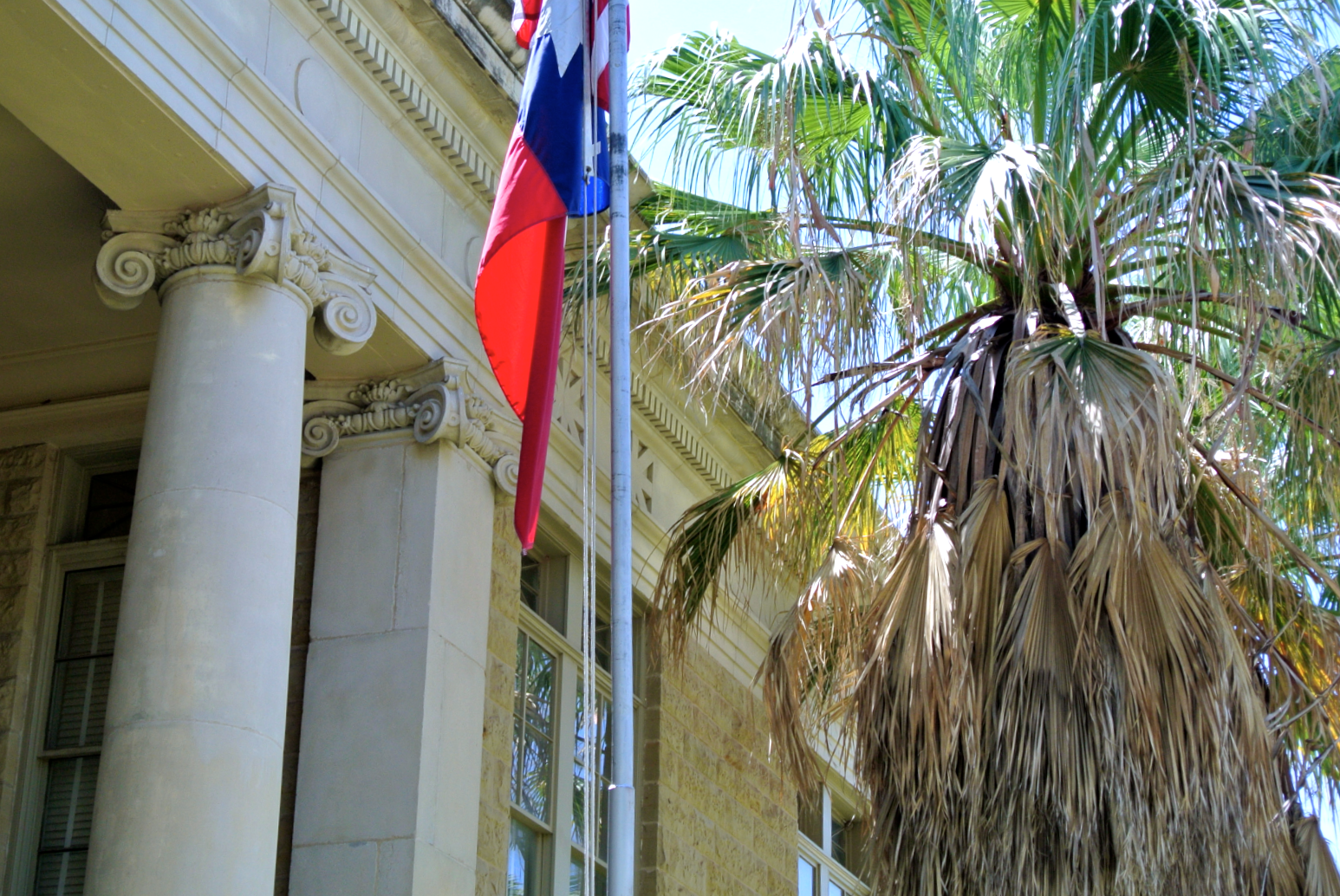 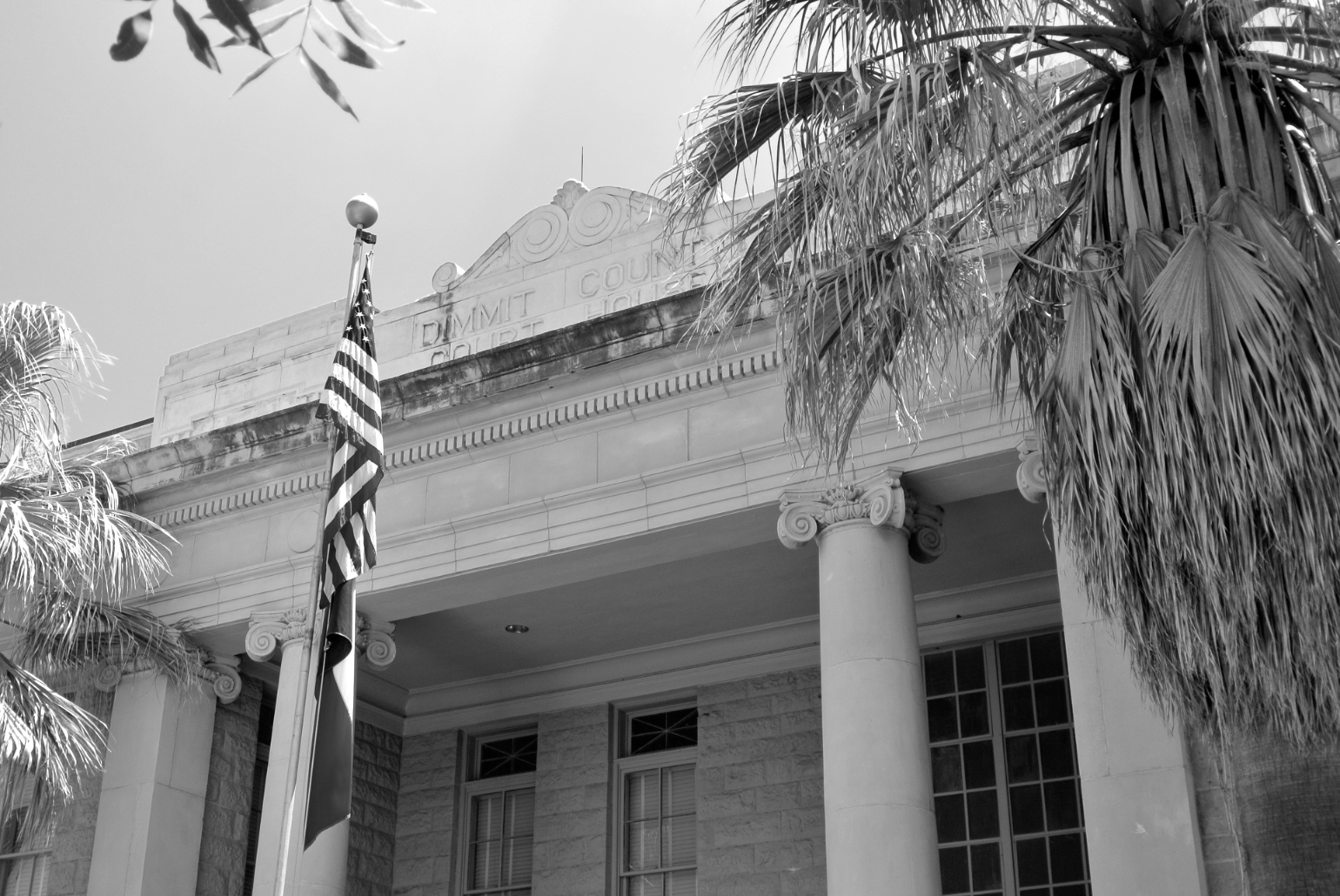 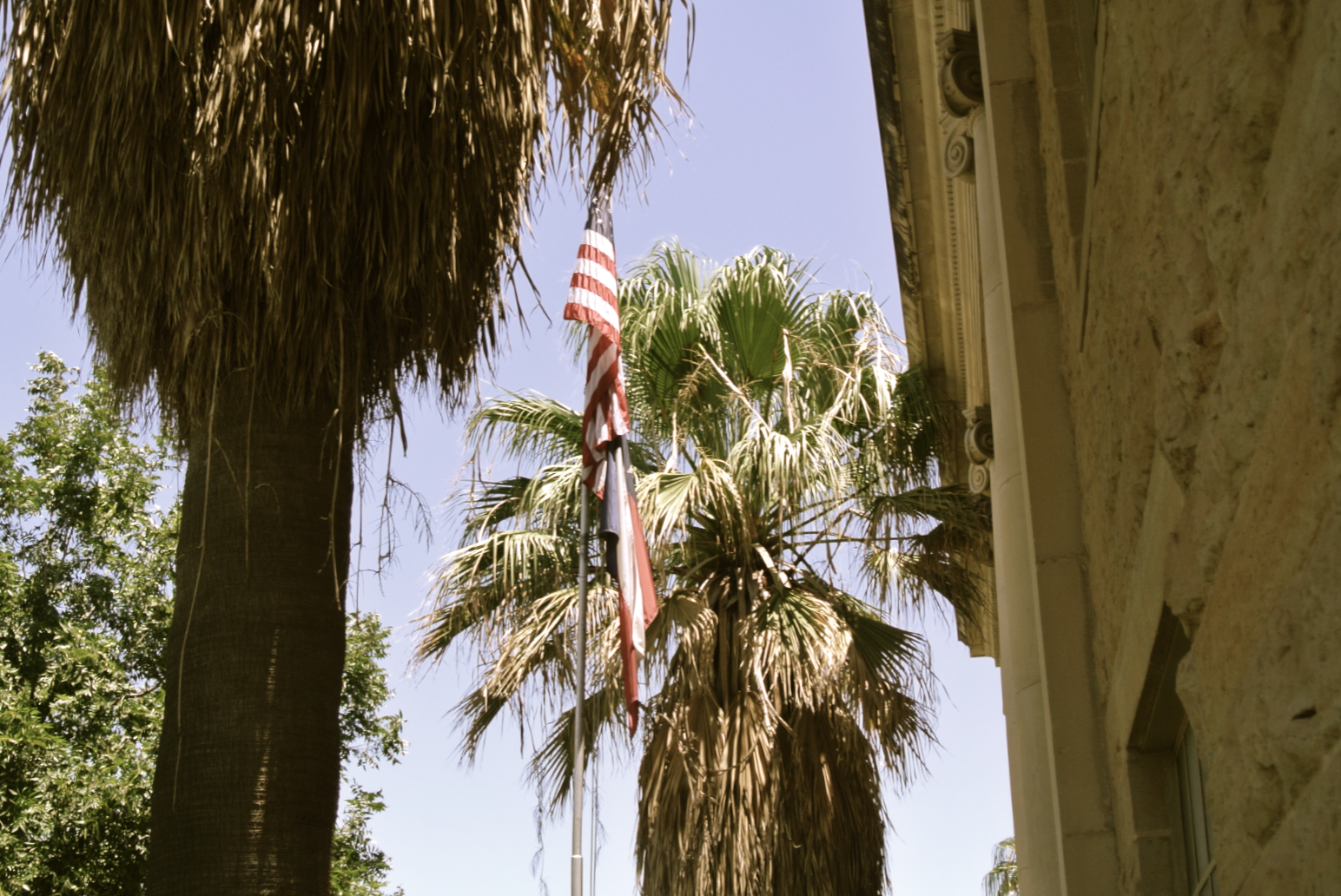 This is the Balia Inn and Cafe. I didn’t stay here, but the food was certainly good.