“The county comprises 1,795 square miles of nearly level to undulating terrain with an elevation ranging from 250 to 800 feet above sea level. The northern part of the county drains into the Nueces River, while the central and southern parts drain into the Laguna Madre through Baffin Bay.”

“In 1812 Julián Flores and his son Ventura received the deeds to the San Diego de Arriba and San Diego de Abajo grants, totaling eighty leagues, from the Spanish government; herdsmen in their employ may have been the first European settlers in the county. In 1848 Ventura Flores sold some land on San Diego Creek to Pablo Pérez. The community Perez established there, called Perezville, was the precursor of San Diego.”

“In 1858 the Texas legislature formed Duval County, which originally embraced 1,887 square miles, from parts of Nueces, Live Oak, and Starr counties. County organization did not occur until eighteen years later. The county was named for Burr H. Duval, who fought in the Texas Revolution and was killed in the Goliad Massacre.”

“Duval County has always been somewhat off the beaten track of development. In 1867 Father Claude Jaillet built a church in San Diego that became the only public place of worship between Corpus Christi and the Rio Grande. Despite this civilizing influence, however, Duval County could still be a wild and dangerous place.”

“In 1873 the outlaw Alberto Garza and some sixty followers made the county the center of their horse-stealing and cattle-skinning operations. They sent orders to the citizens of San Diego to bring enough money to buy the stolen hides or enough men to skin the hide-peelers. A party of Anglos chose the latter option, attacked the outlaw’s camp, and scattered the rustlers.”

“Five years later, in mid-April 1878, a band of forty Lipan Apache, Seminole, and Kickapoo Indians, reportedly led by a blond white man, cut a swath through Webb and Duval counties, murdering and pillaging several ranches before dispersing. The perpetrators of the so-called “Great Raid of ’78″ were never caught. A legend of more recent vintage holds that Francisco (Pancho) Villa may have buried two saddlebags of silver in the area.”

“The county was finally organized in 1876, and San Diego was selected as the county seat.” 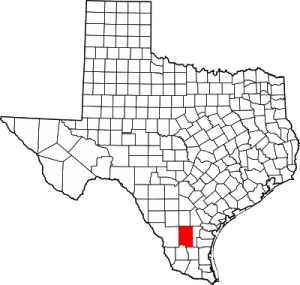 “James O. Luby, the first county judge, dominated Duval County politics for most of the next three decades. When Luby defected from the Democratic to the Republican party, he almost singlehandedly made the GOP an important factor in Duval County politics. The battles between the Botas and Guaraches (“boots” and “sandals,” or Republicans and Democrats) were often ferocious.”

“Luby was part of an influx of Anglos that also included Walter W. Meek, Sr., who had come to Duval County after the Civil War and helped make it the sheep ranching capital of Texas. The county at the time was described as “one extended pasture” and “a great sheep walk.”"

“But in the mid-1880s a mysterious plague began killing the sheep, and after Grover Cleveland was elected president in 1884 on a platform that included eliminating the tariff on foreign wool, the price of wool dropped from twenty-six cents a pound to seven cents a pound. The bottom fell out of the Duval County sheep. There were only 60,160 sheep in the county in 1890 and only 3,627 by 1900.”

“The white influx led to the county’s most enduring characteristic: a vast Mexican-American majority held in thrall by a small but wealthy and influential white minority. In the late nineteenth century Anglos made up less than 10 percent of the county’s population but controlled most of the county’s trade and politics.”

“Ironically, it was an Anglo, a former cowhand and schoolteacher named Archer Parr, who turned this imbalance to his advantage by soliciting the Mexican Americans, whom his fellow Anglo politicians had traditionally ignored. These people, many of whom were desperately poor, gave up their political autonomy in exchange for county jobs and occasional cash disbursements of questionable legality from the county treasury. This arrangement, which one Duval County official called “frankly corrupt but fully benevolent,” allowed Parr, and later his son George B. Parr, a free hand in running the affairs of the county, and became a way of life there.”

“The Parrs found it expedient to keep the people of Duval County dependent on their largesse, and so placed little emphasis on the state of education in the county. Duval County’s 25.3 percent illiteracy rate in 1930 was the sixth highest in the state. Oil was discovered in the county in 1905, but not until a wildcat well came in near Freer in October 1928 did a full-scale oil boom occur.”

“George Parr, the “Duke of Duval,” and his cronies became more deeply entrenched than ever, despite his imprisonment in 1936 for tax evasion. Duval County’s reputation for political corruption peaked with Lyndon B. Johnson‘s election to the United States Senate in 1948. The famous Box 13, which gave Johnson his eighty-seven-vote victory, was actually in Jim Wells County, but the manipulation of the returns was almost certainly directed by Parr.”

“In 1982, 86 percent of Duval County’s estimated population of 12,900 were of Hispanic origin, the eighth-highest percentage in the United States; 7 percent were of English descent, 5 percent of German descent, and 5 percent of Irish descent.”

“Tourists, attracted by such spectacles as Freer’s annual Rattlesnake Roundup in April and Old Fiddlers Contest in July, spent $3,519,000 in Duval County in 1982. In 1990 the population was 12,918. The largest communities were San Diego, with 4,109 in habitants in Duval County, and Freer, with 3,271 residents.”

This burned on August 11, 1914. I visited San Diego exactly one hundred years and a day later. 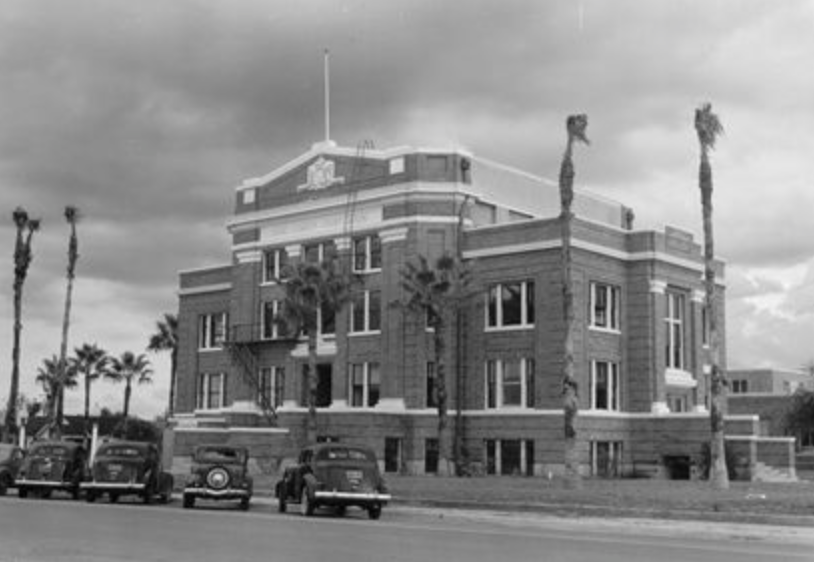 This building, made of an aesthetically pleasing red brick, was designed by the Fort Worth firm Sanguinet & Staats with aid from fellow architect R.D. Gottlieb. L.G. Hamilton provided its construction. It’s a pleasant Classical Revival building, though the years haven’t treated it with great respect. At just over 100 years old, the courthouse is unfortunately falling into ruin.

In 1938, an annex was built (designed by the Page Brothers). At some point, a fire escape was also added along the main façade. This now serves as the courthouse’s signature eyesore. You’ll see what I mean below.

Entering San Diego from the south, on Highway 359 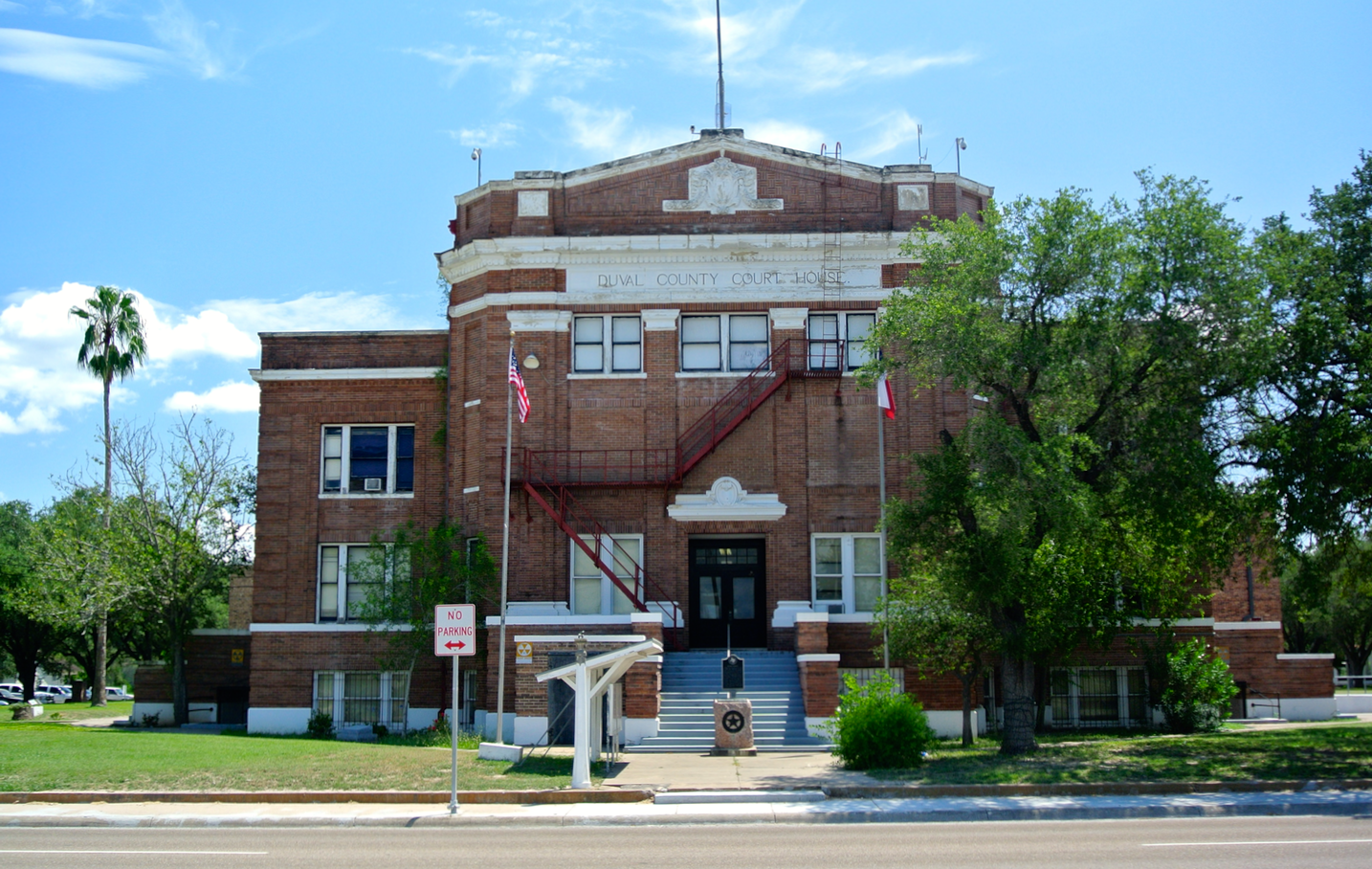 The Duval County Courthouse faces northeast on Gravis Avenue. There’s that fire escape I was talking about. This is the grand, main façade. 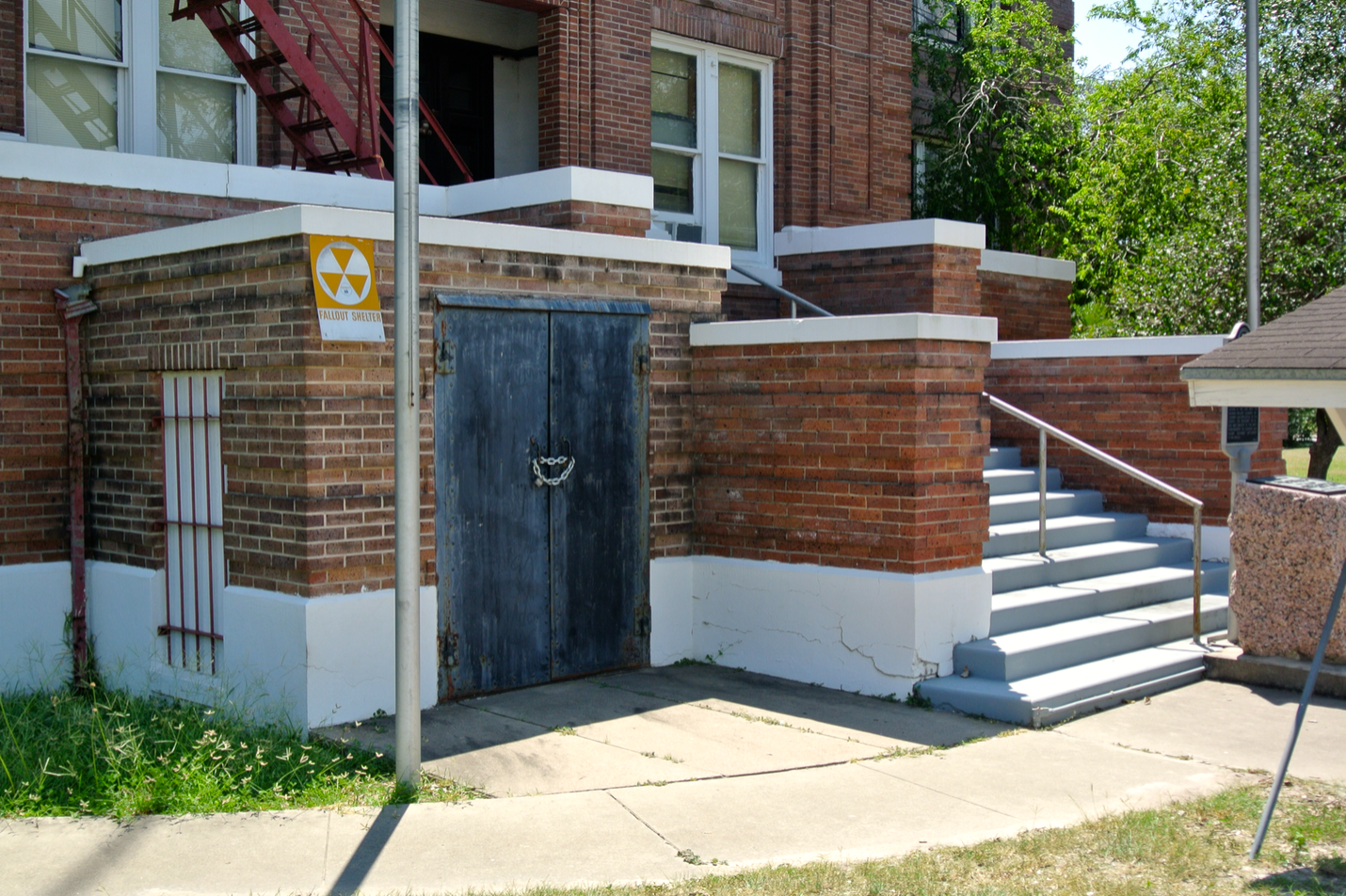 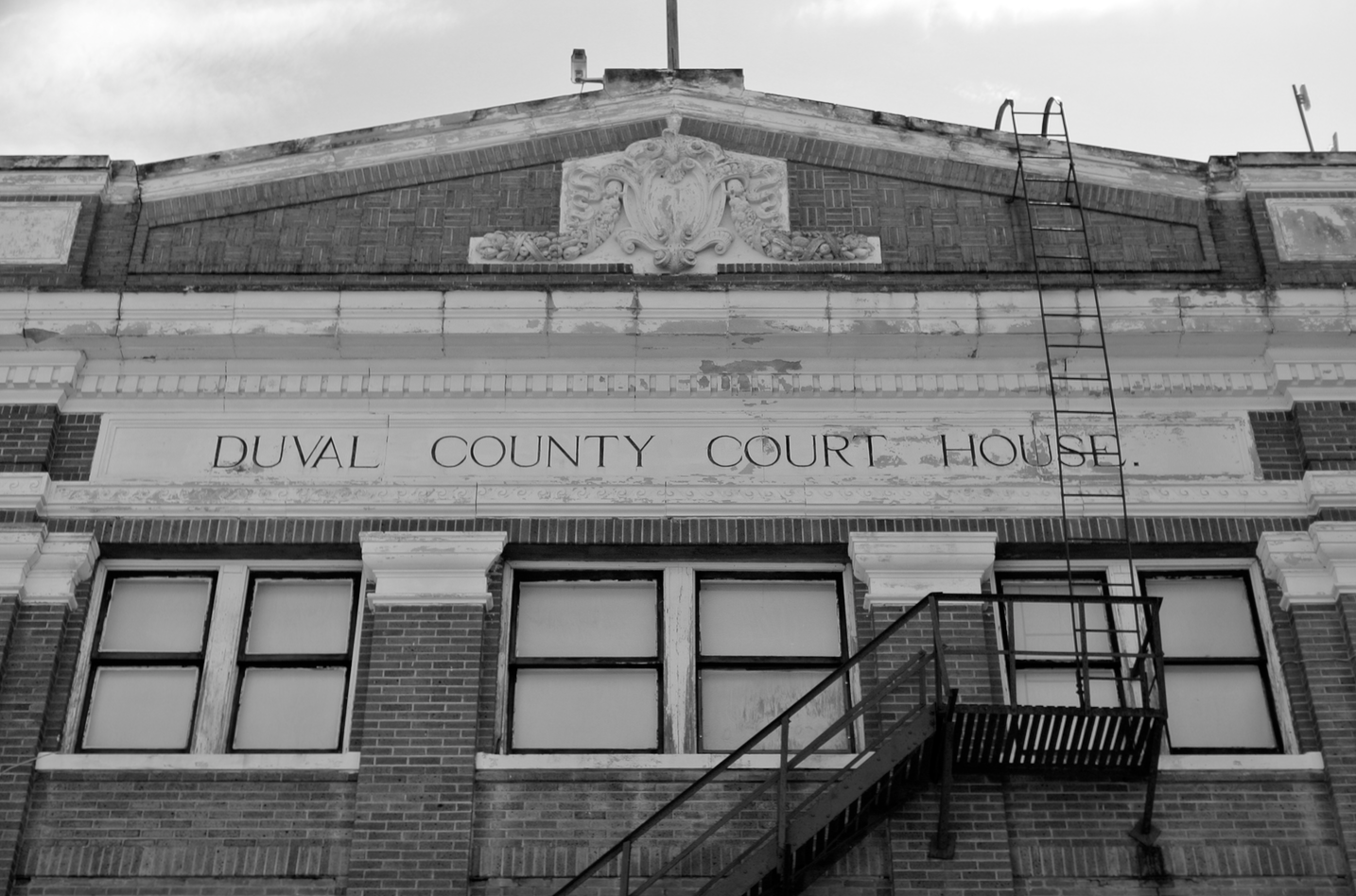 The disrepair is sadly, very visible. 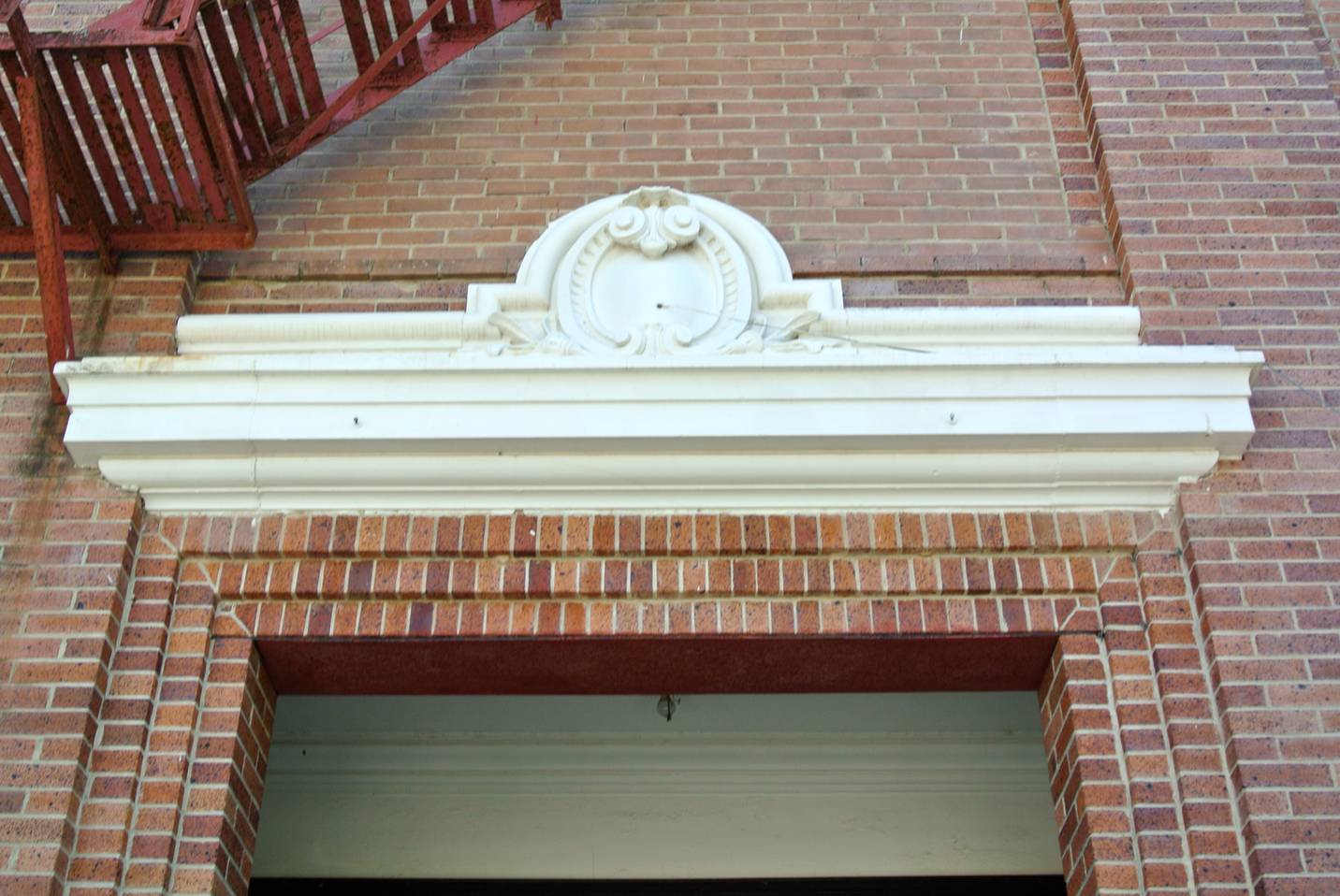 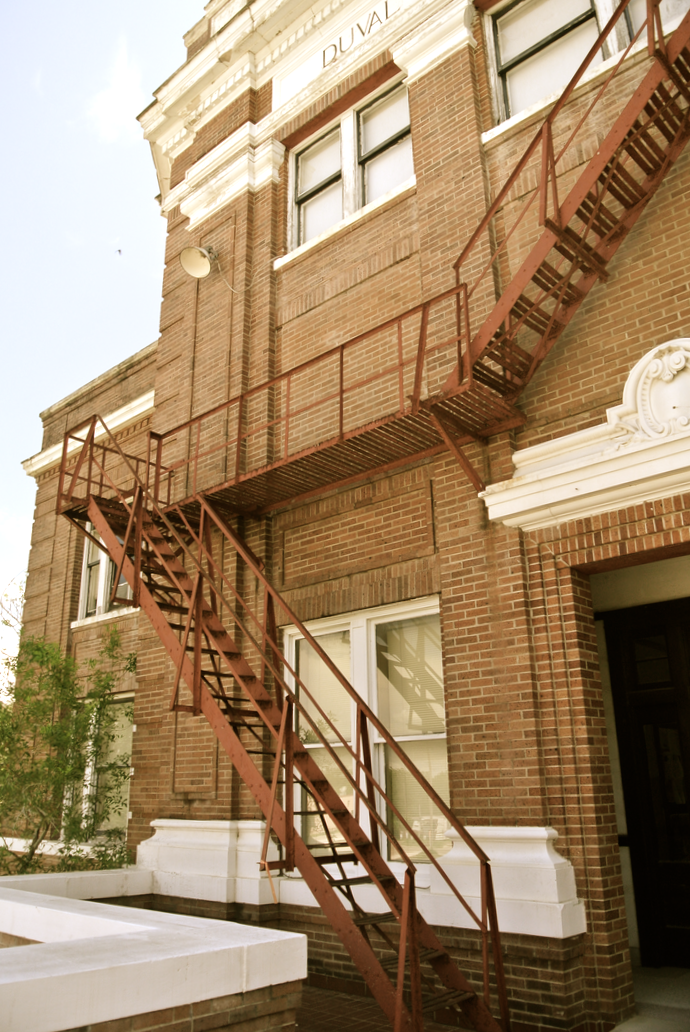 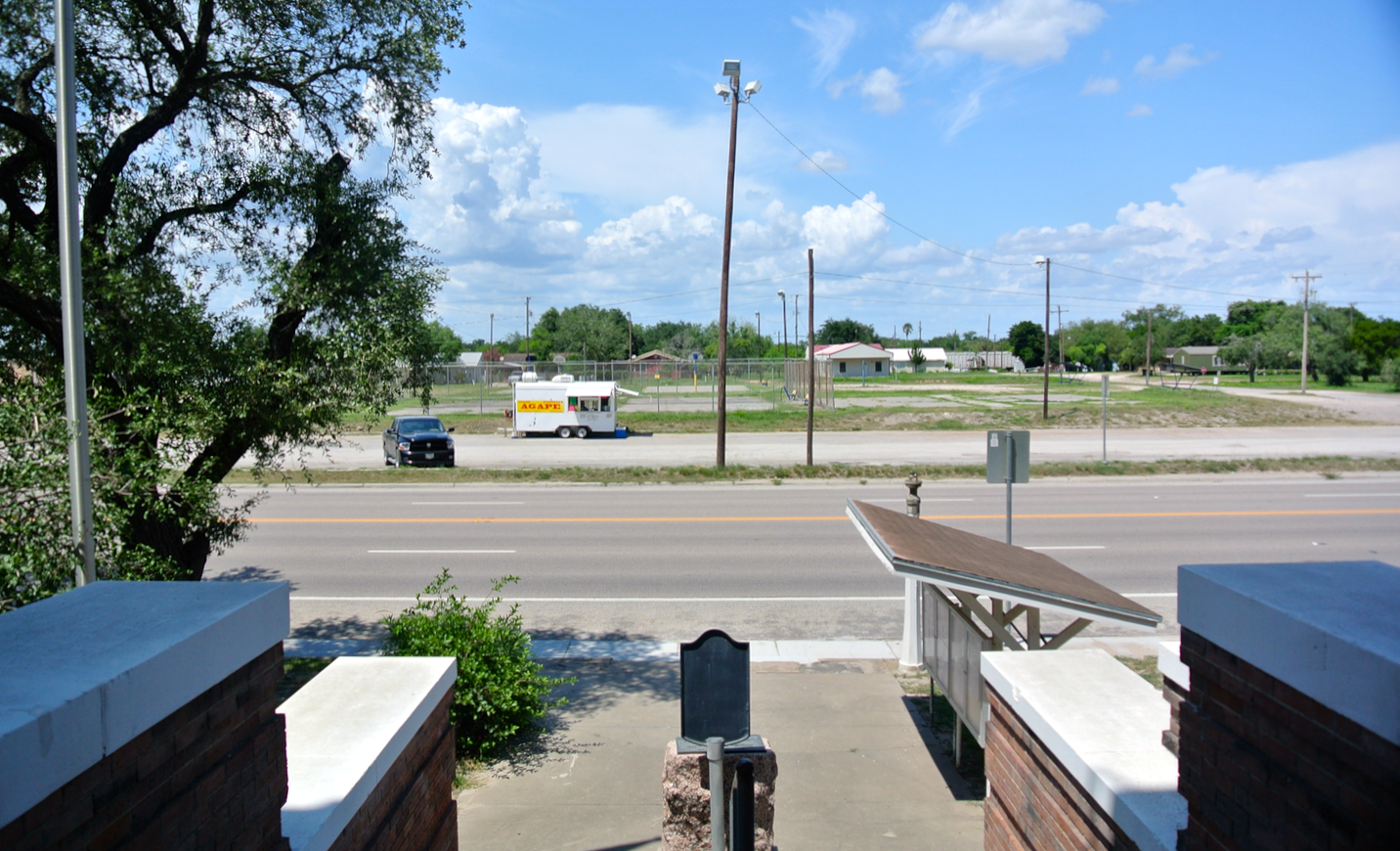 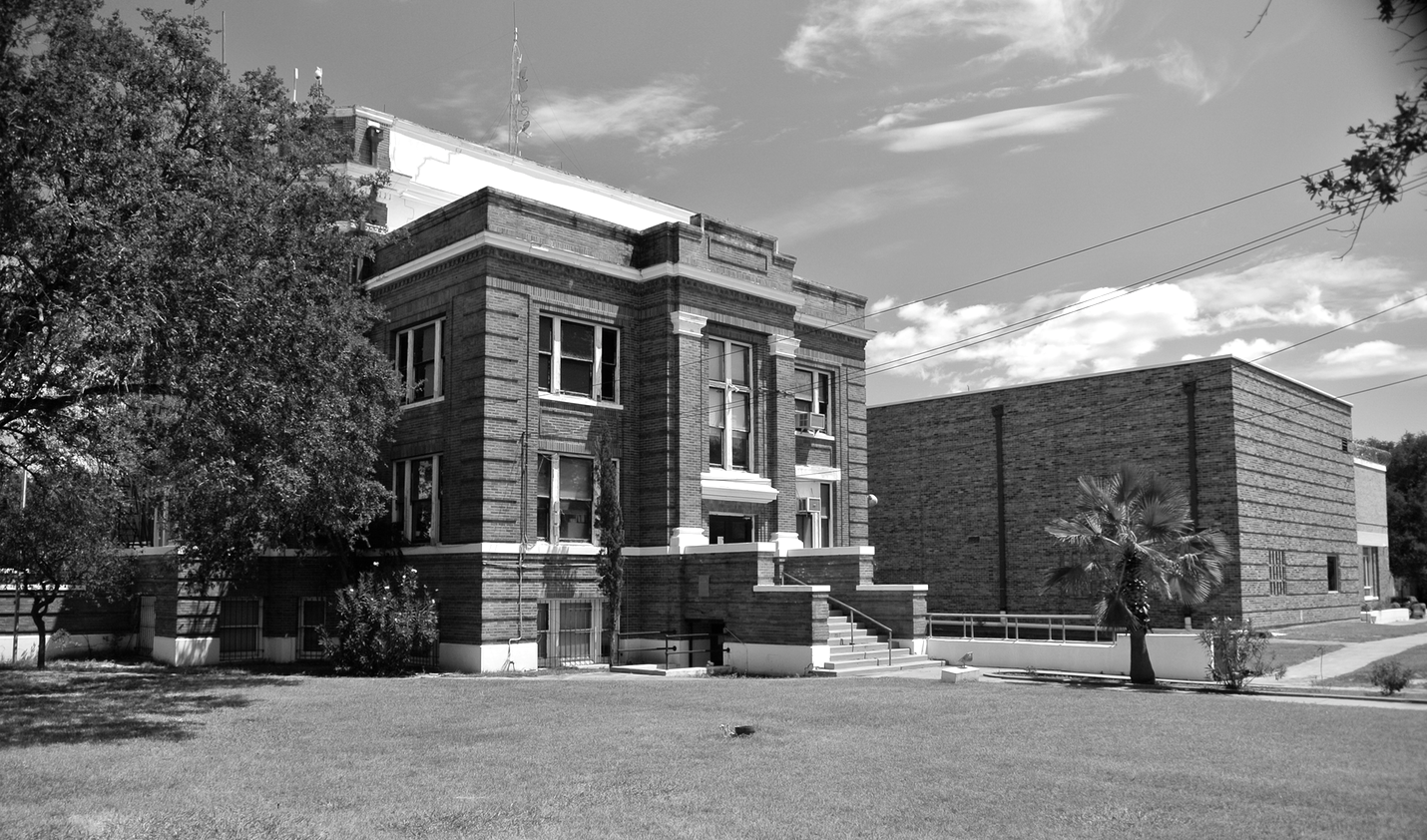 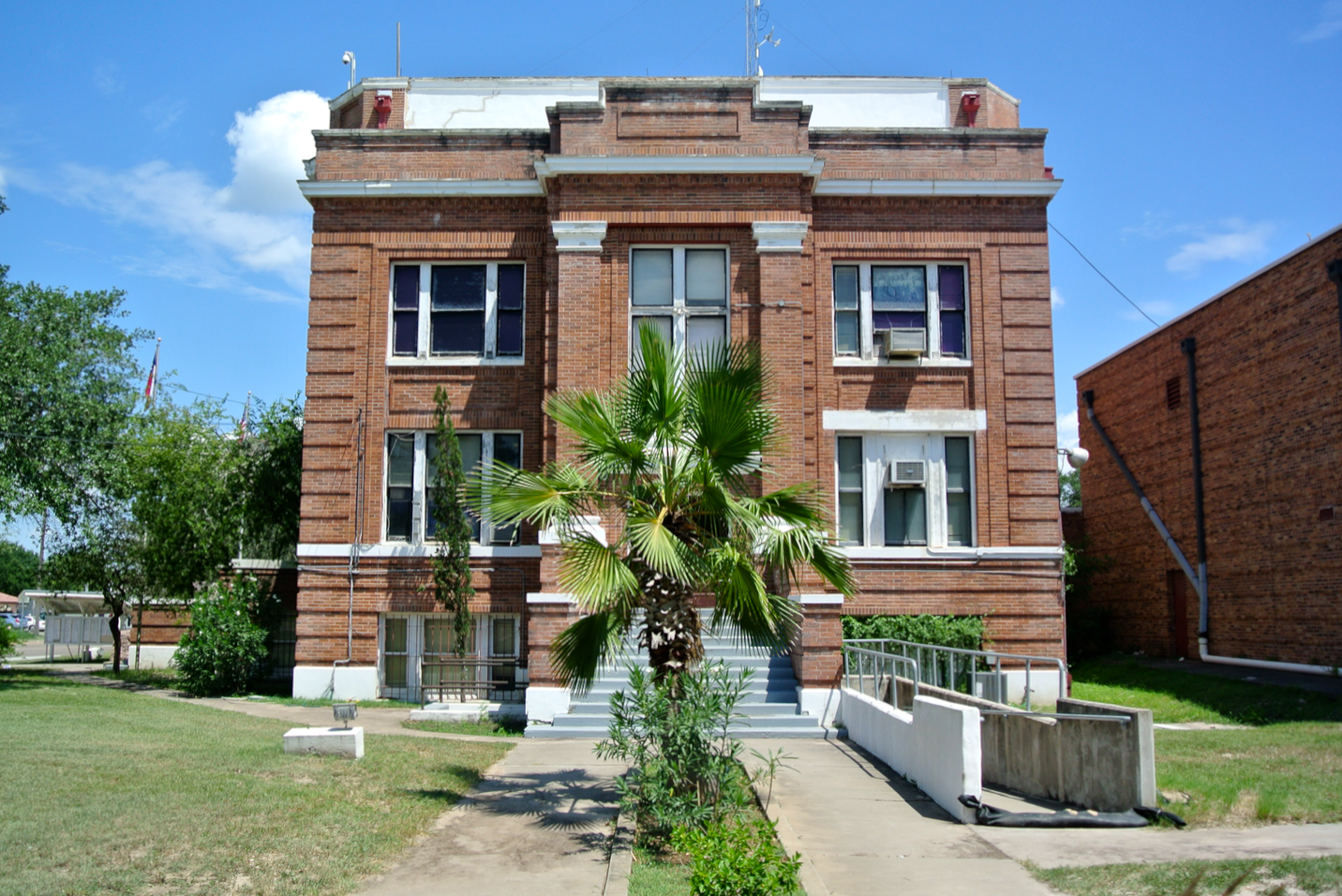 The western entrance, on Bexar Street 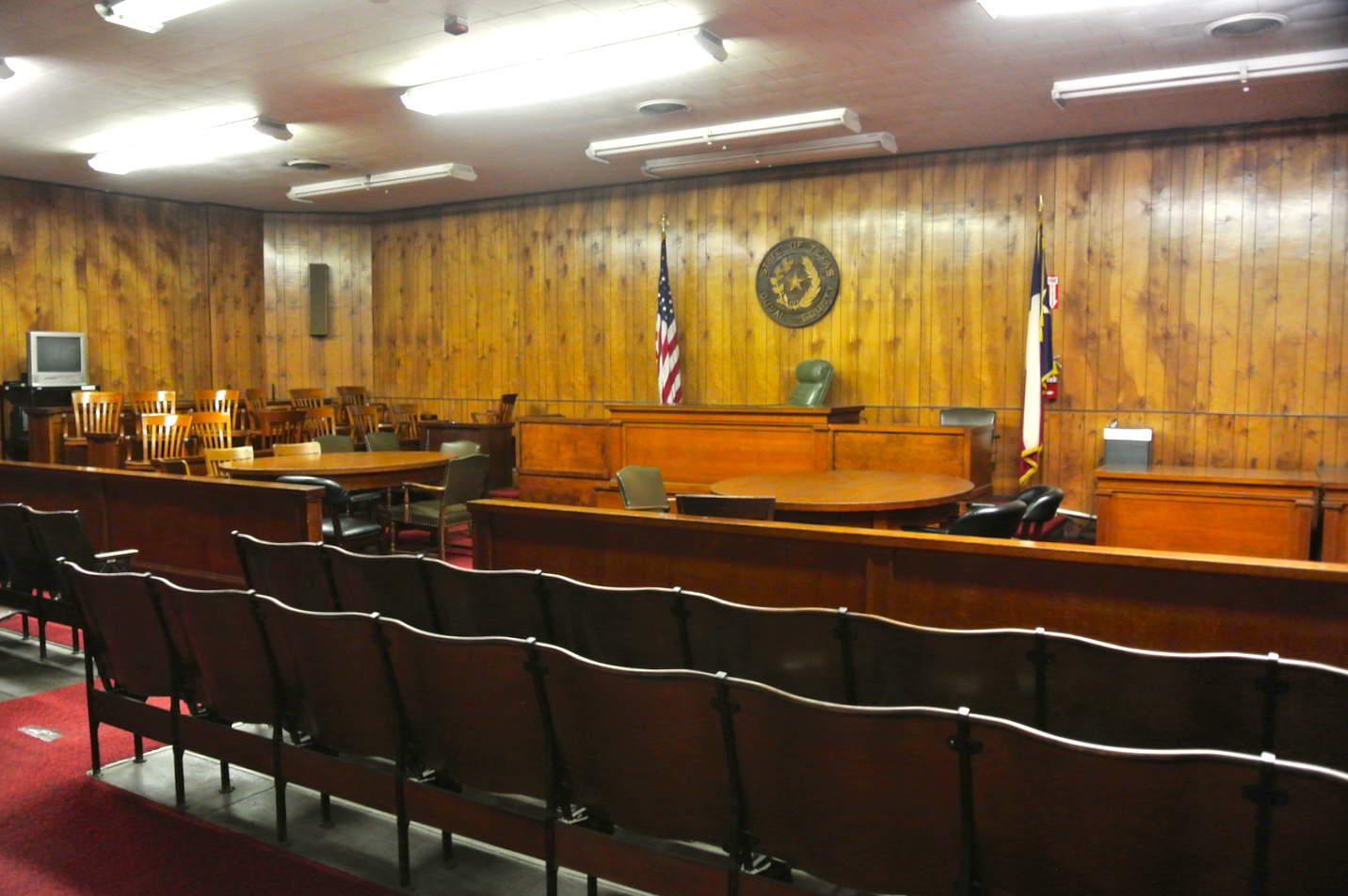 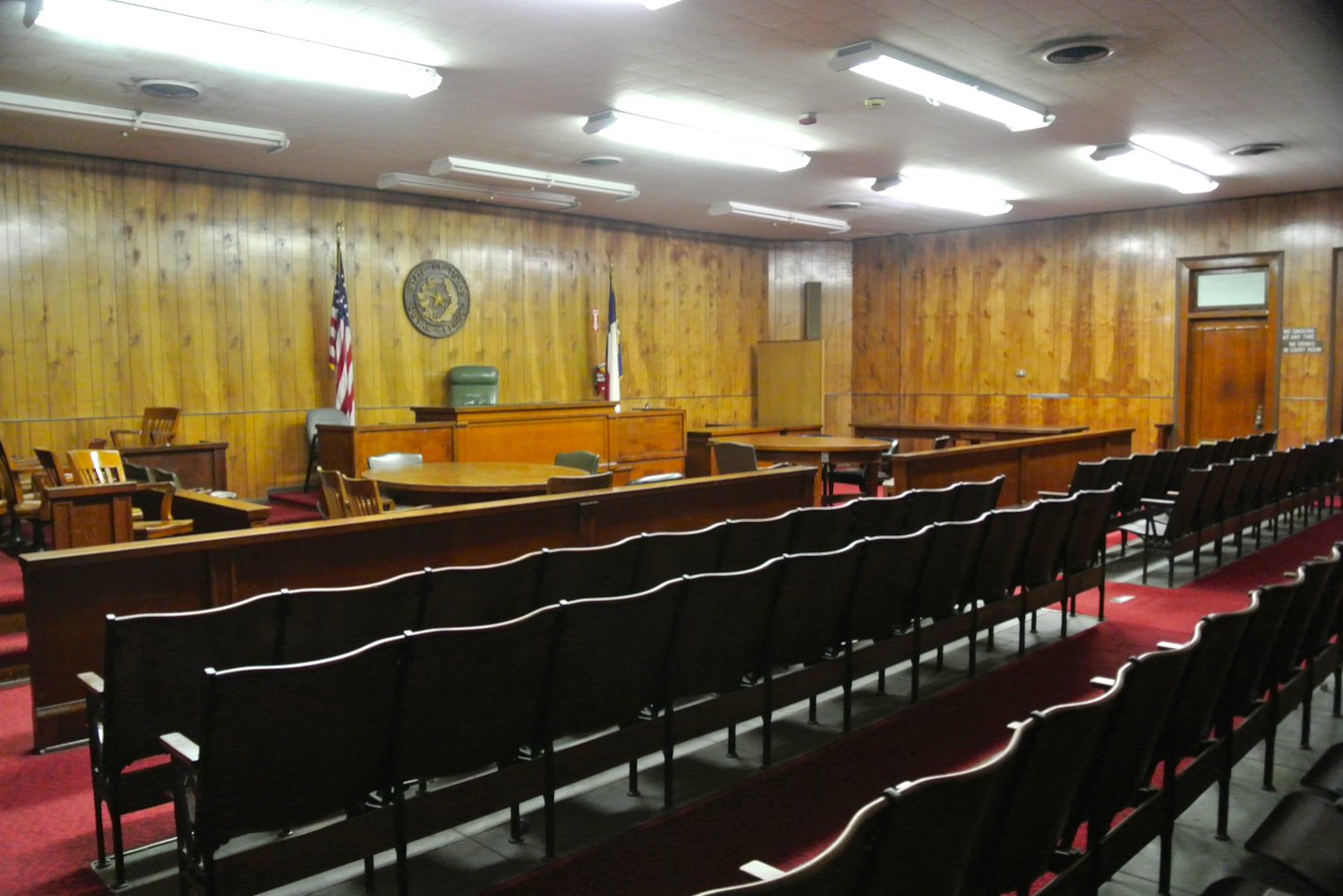 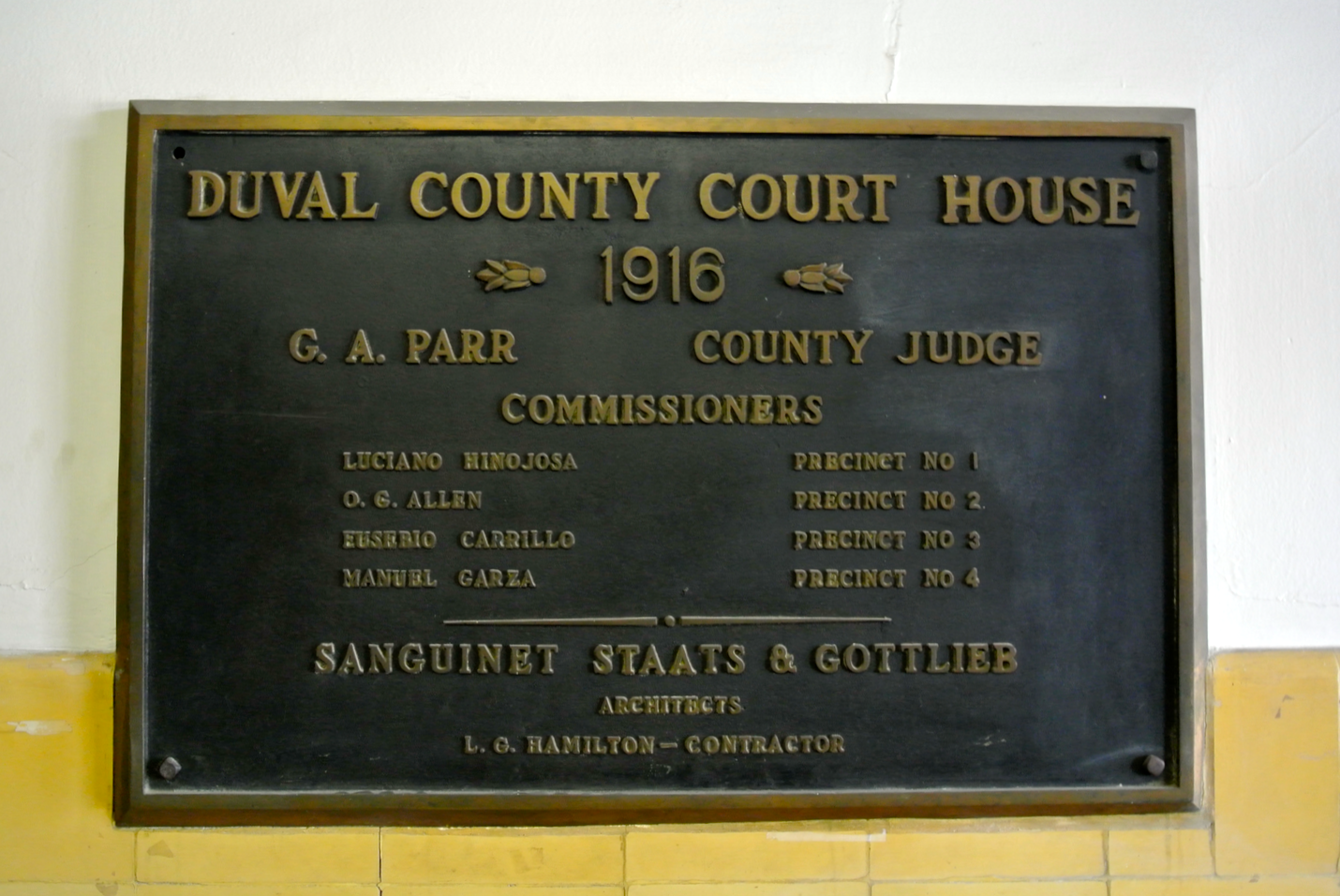 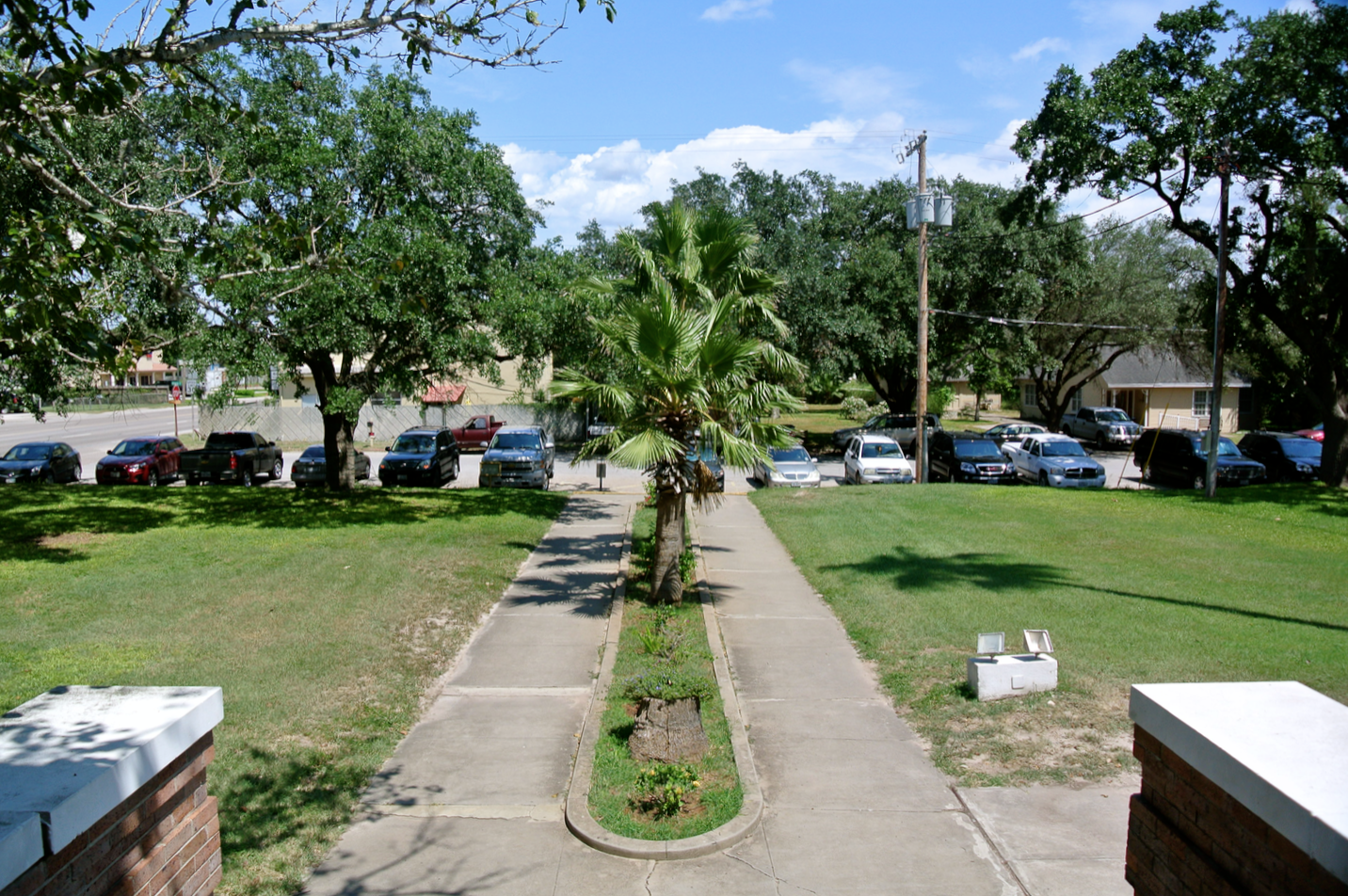 Seguin Street, as seen from the eastern steps 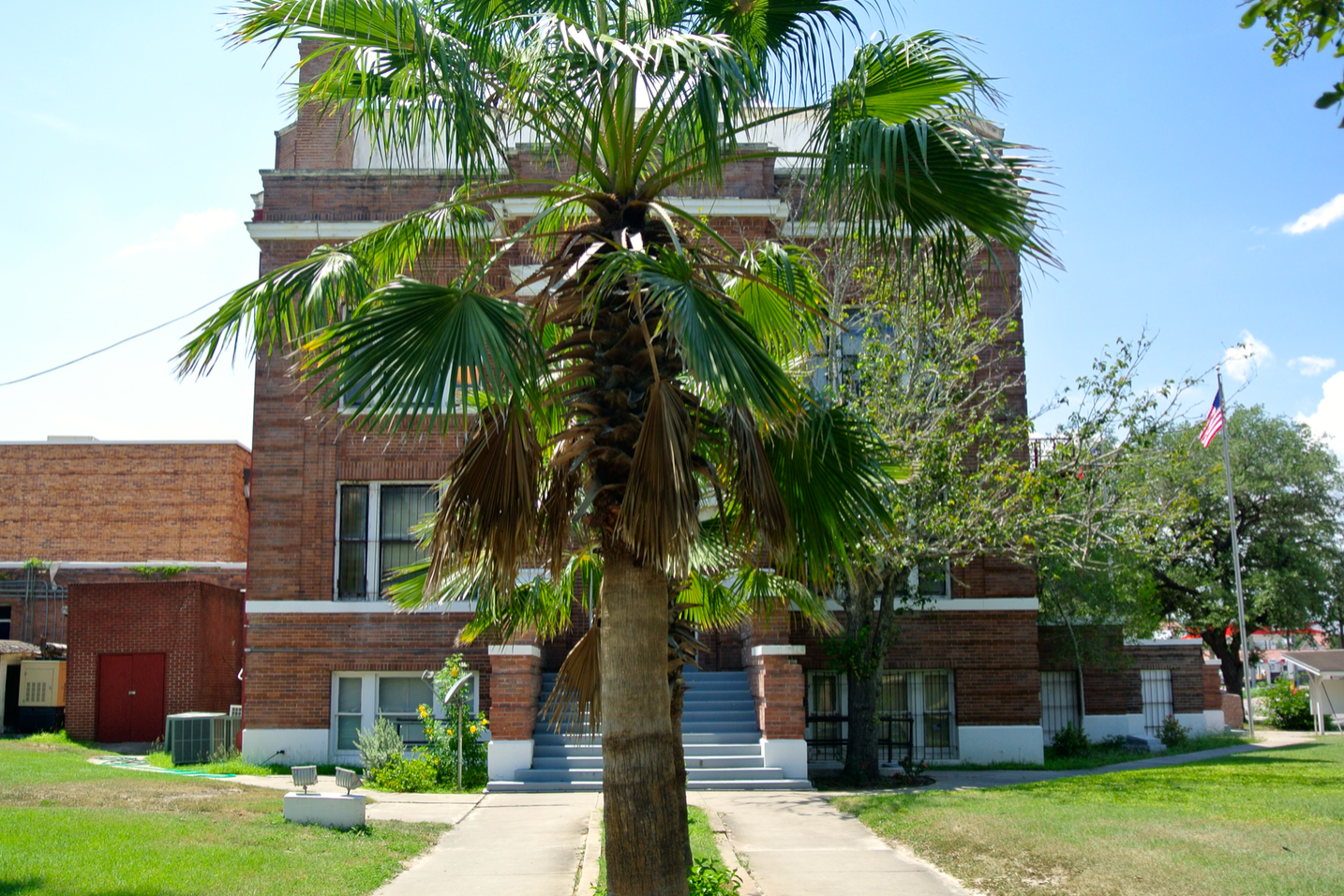 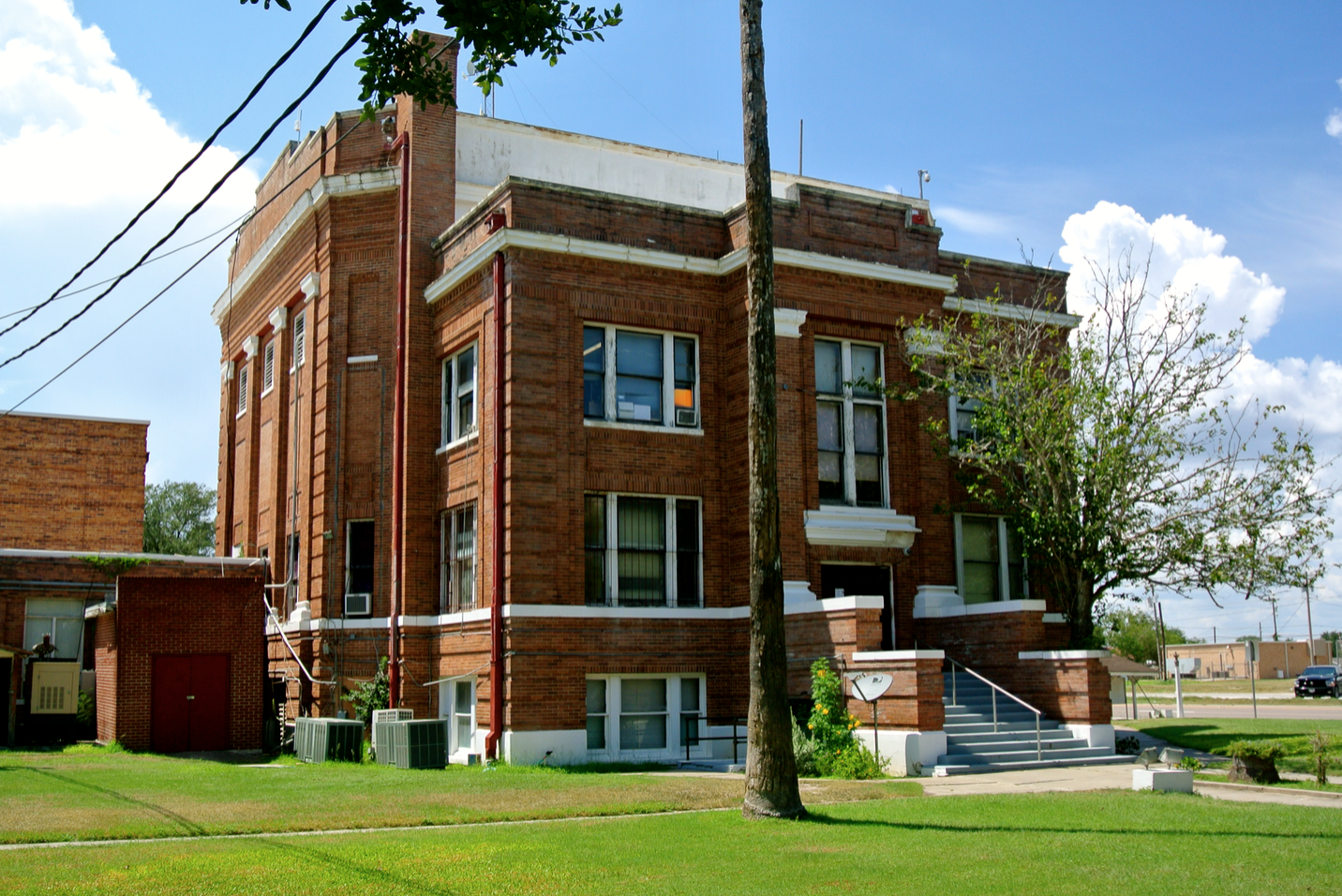 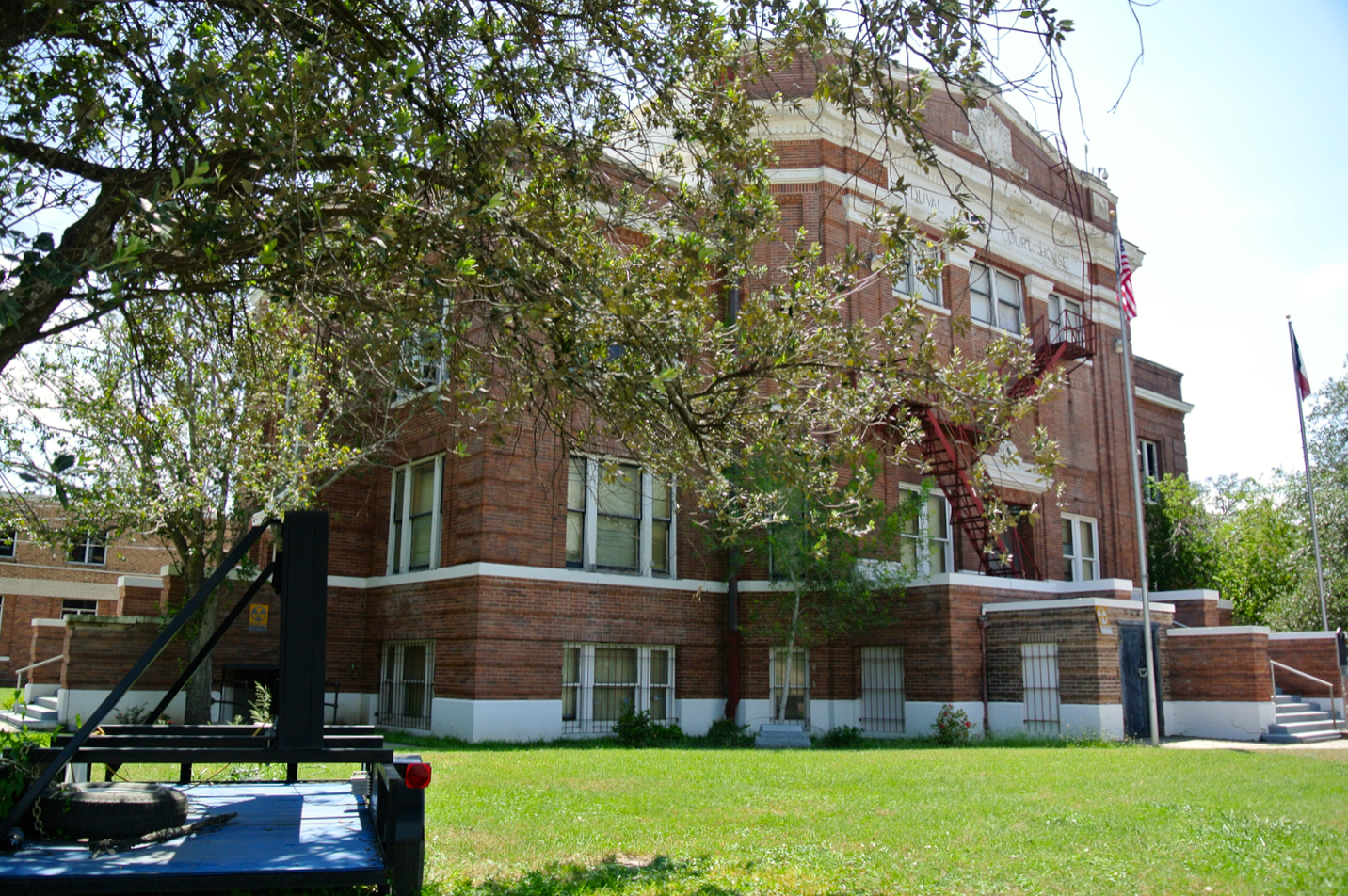 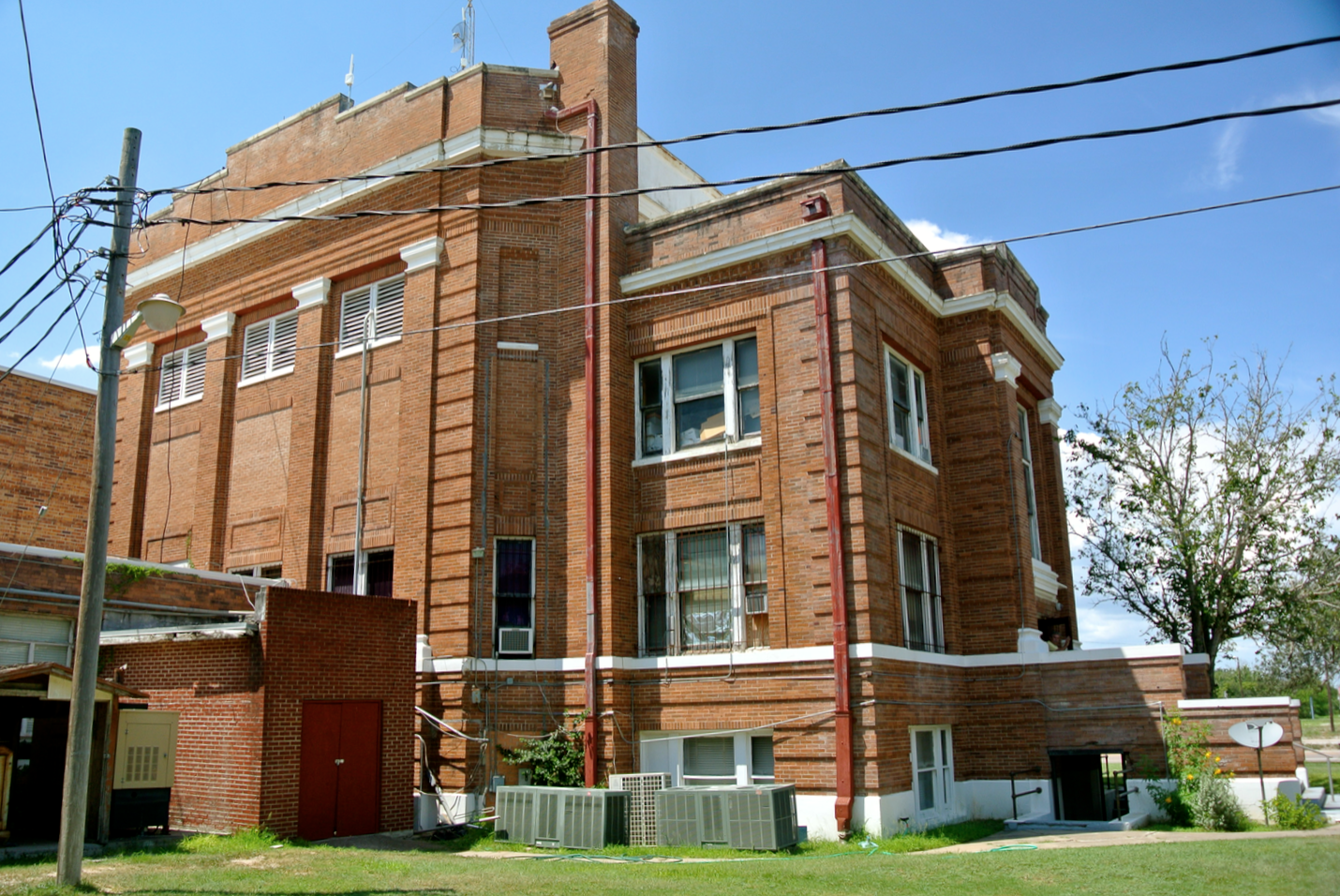 This side is just a shame. Seeing a beautiful building neglected is a depressing thing. 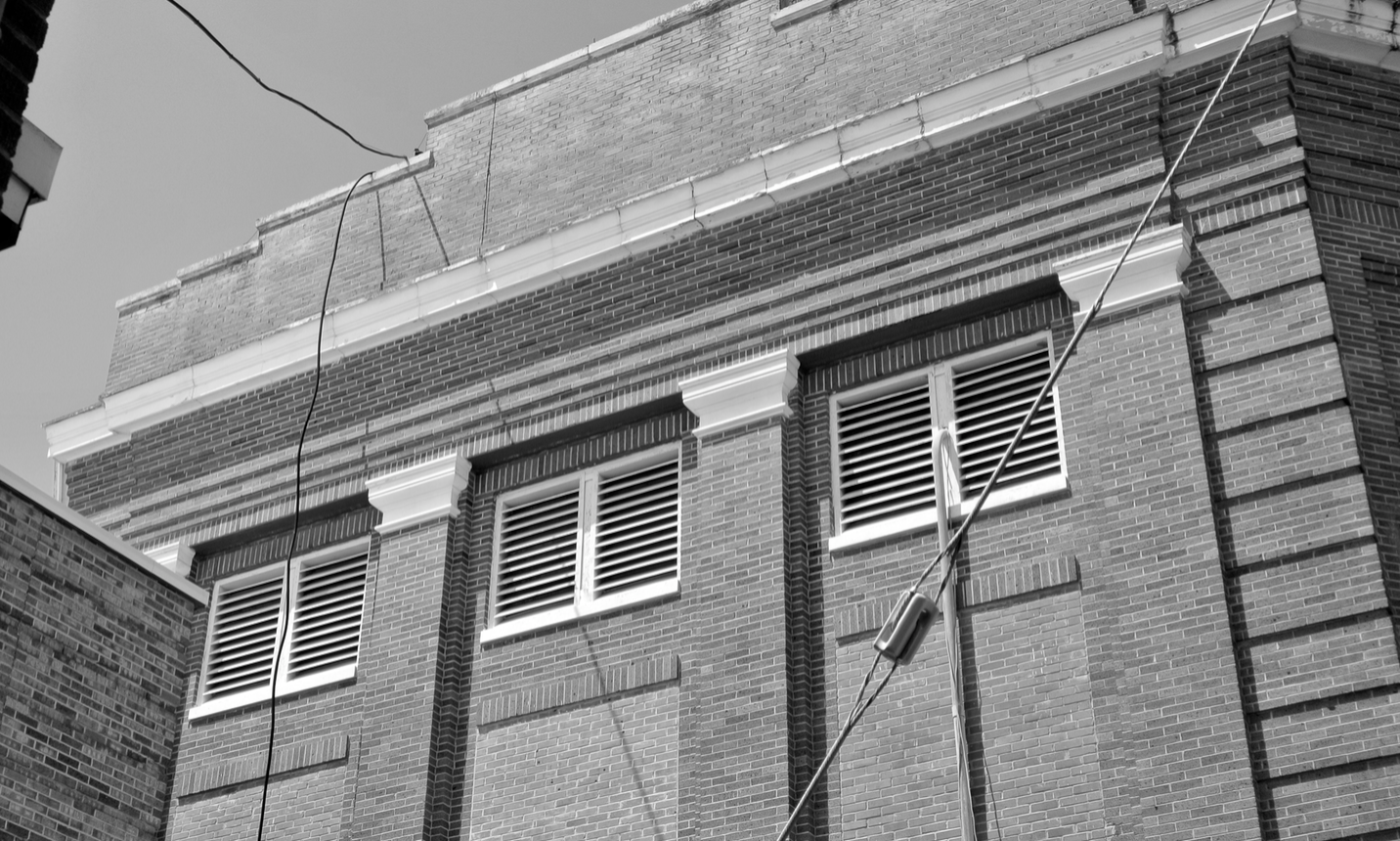 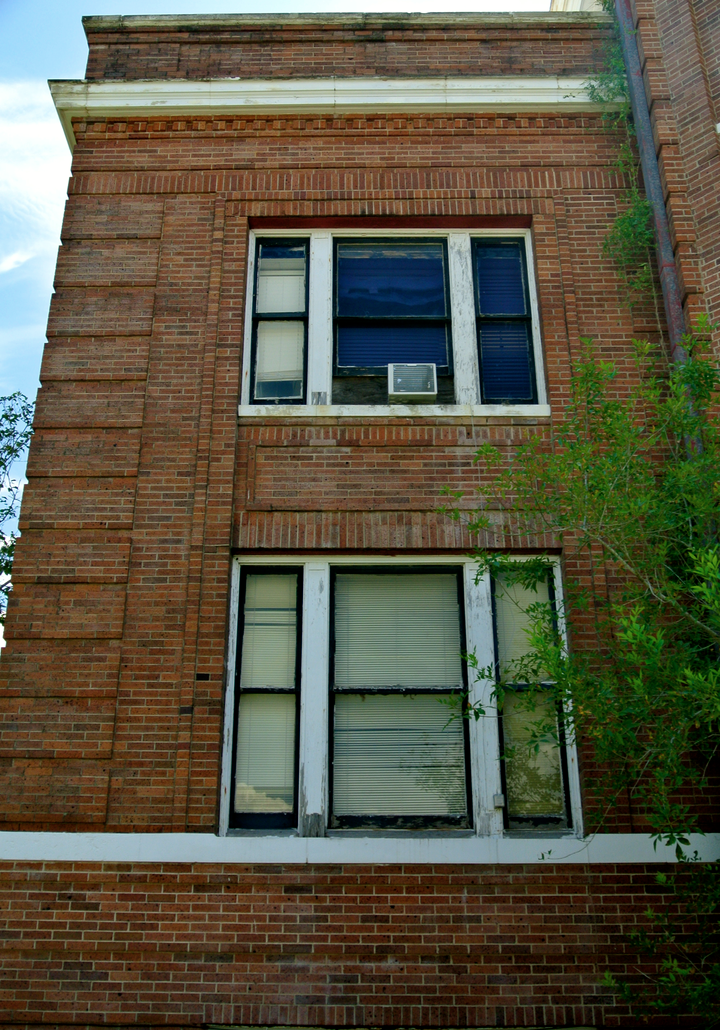 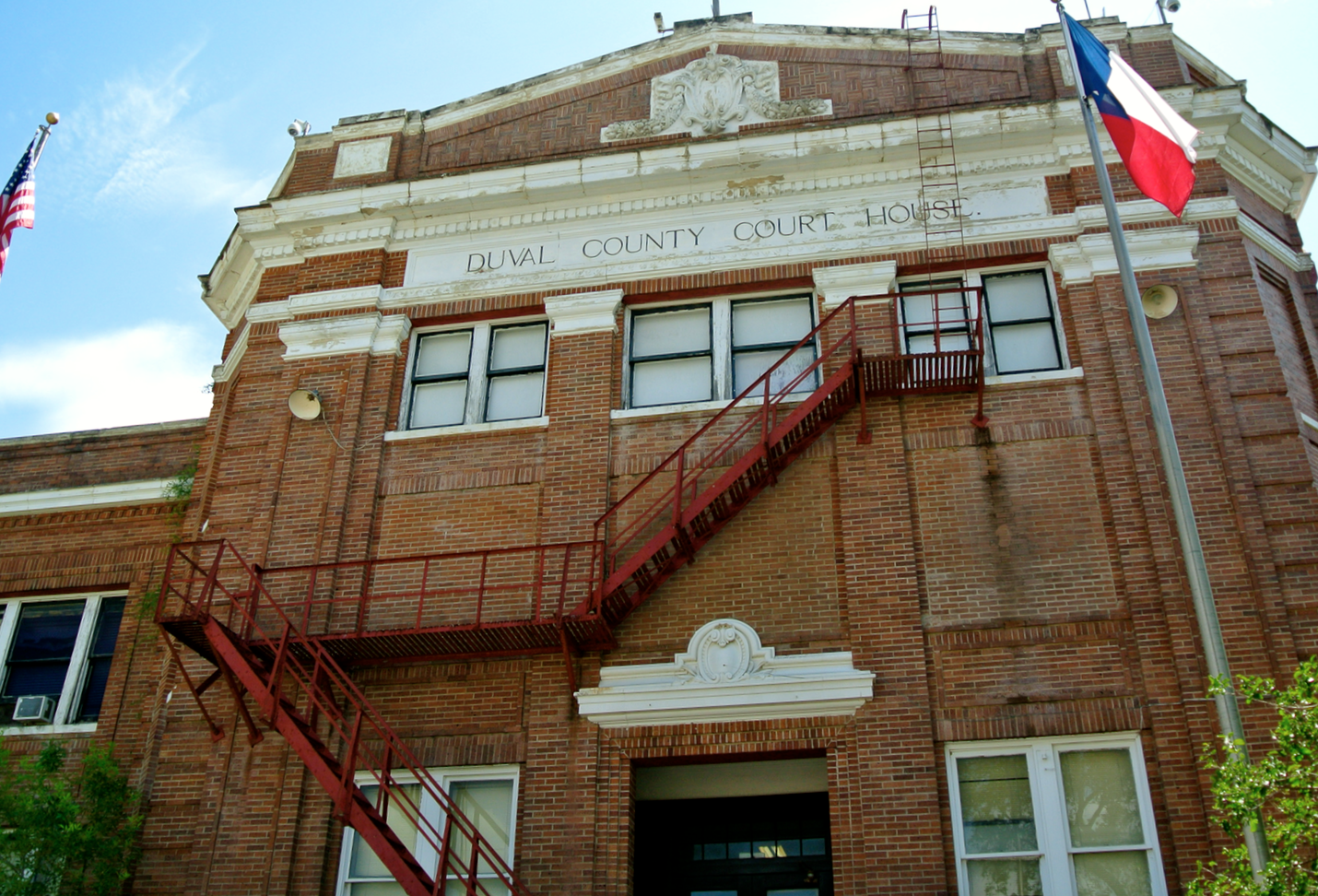 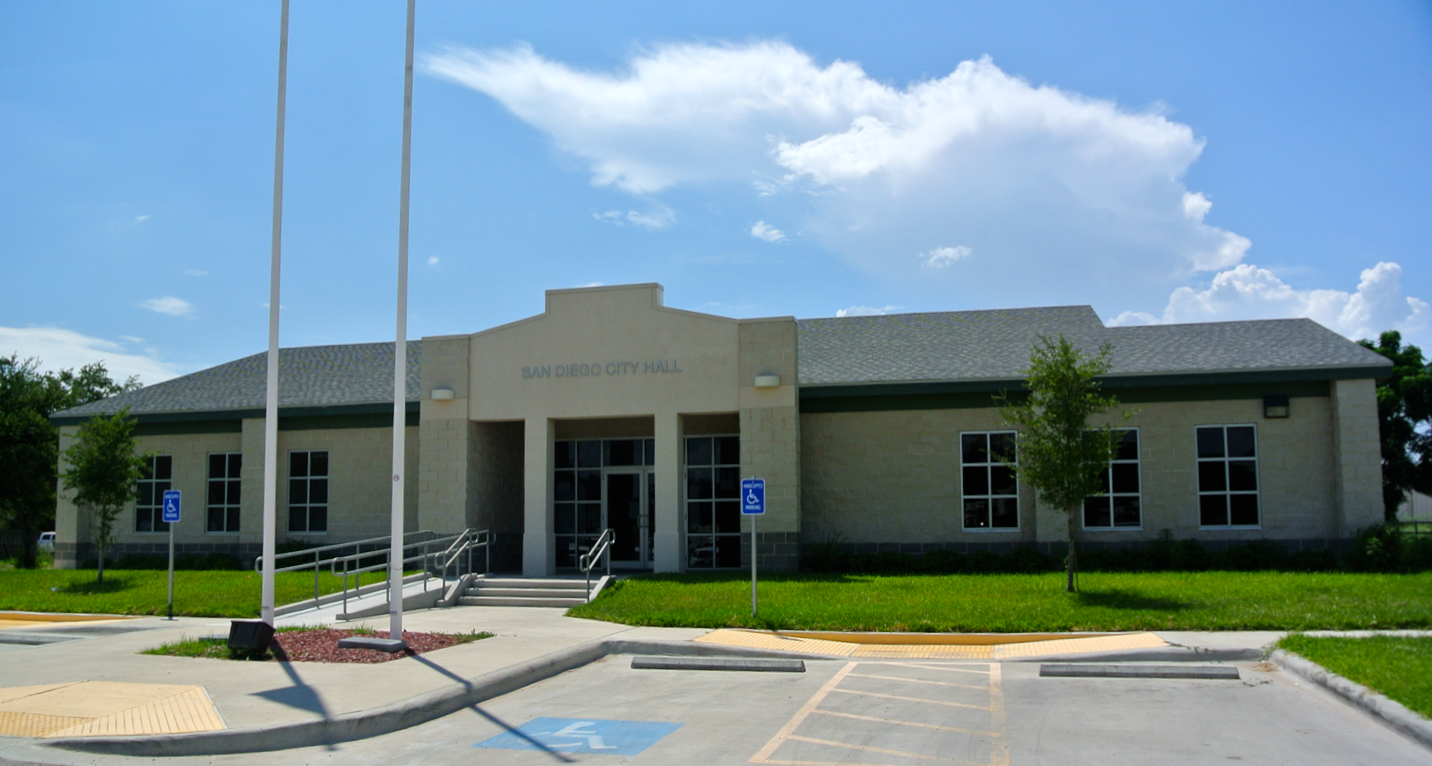 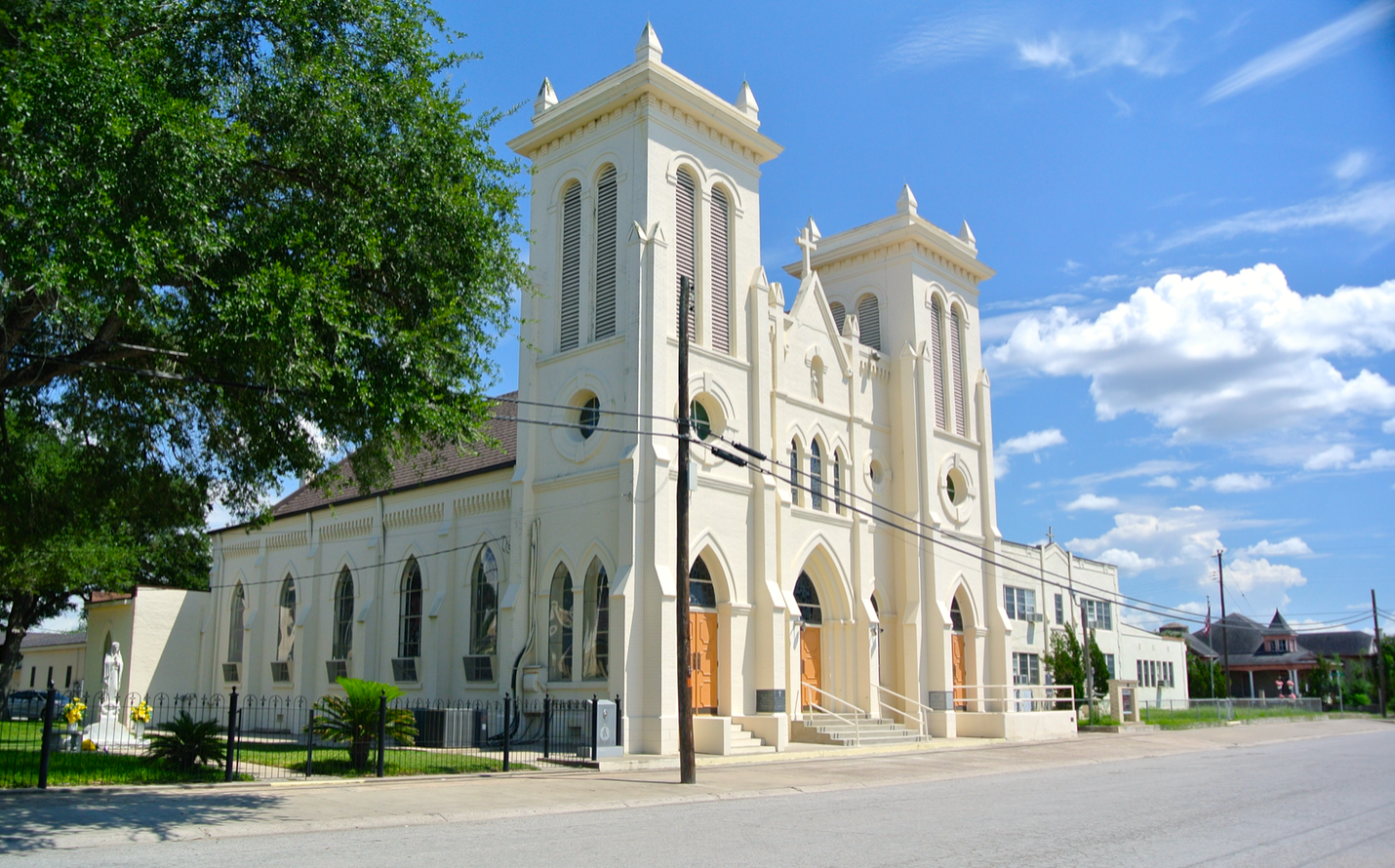 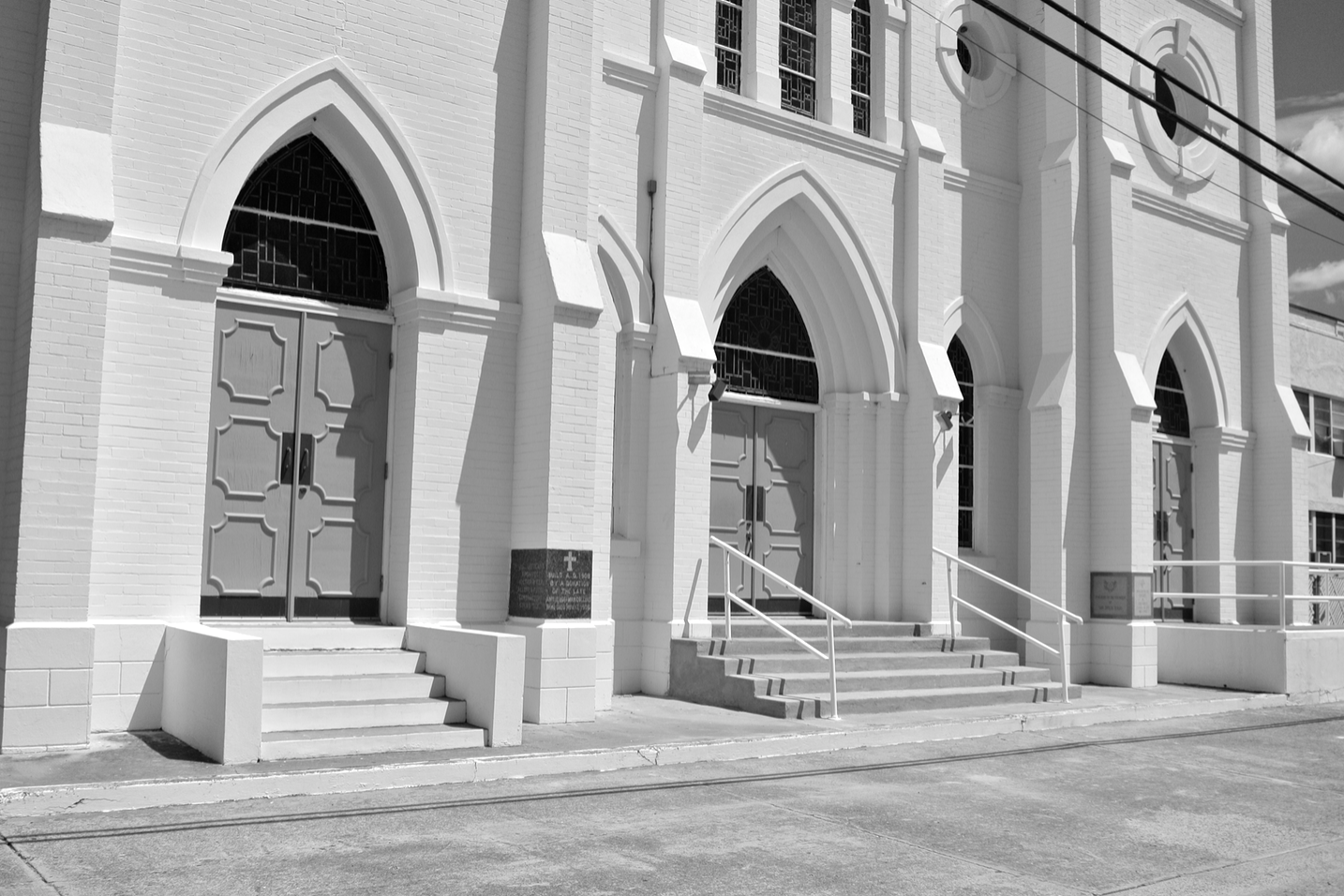 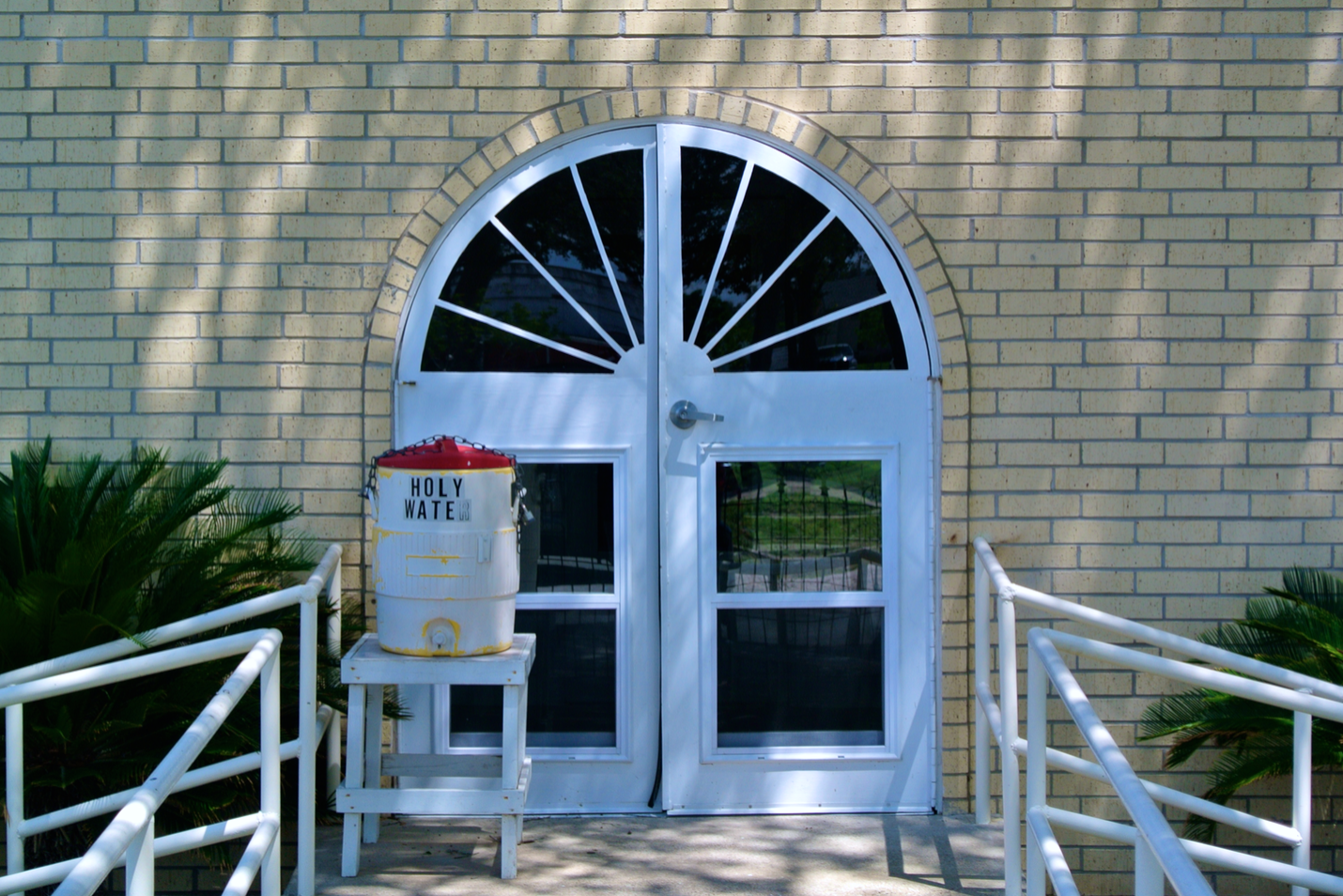 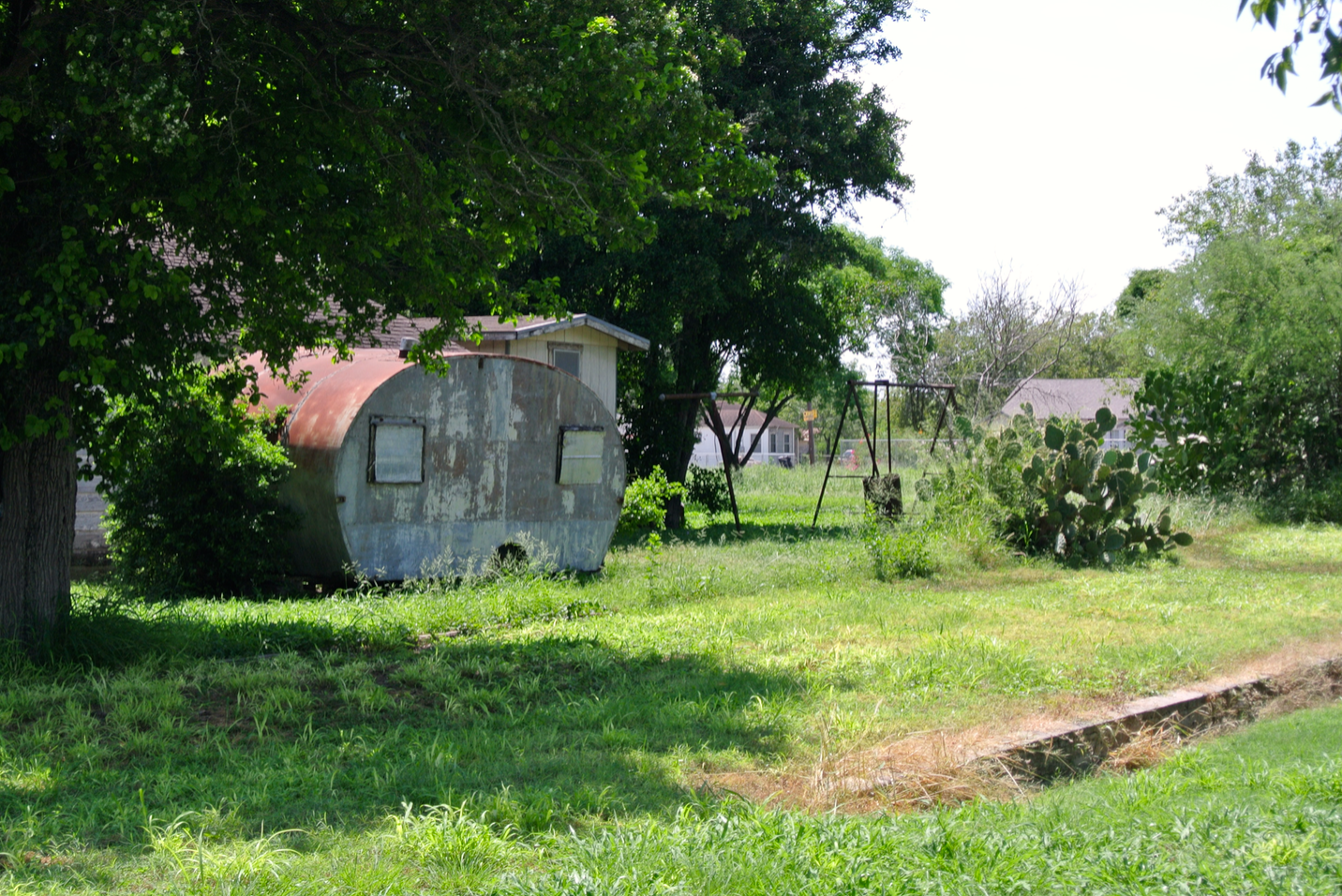 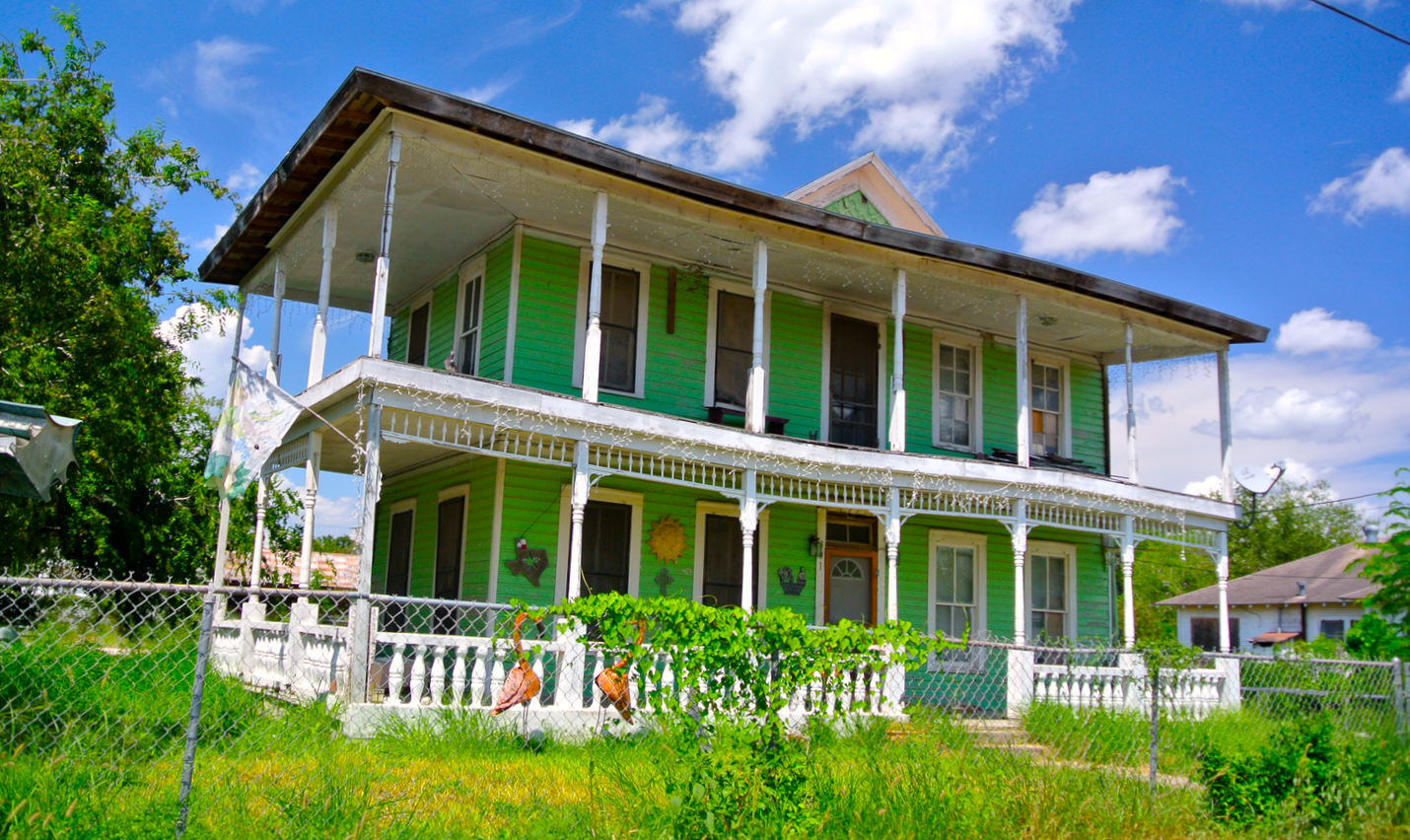 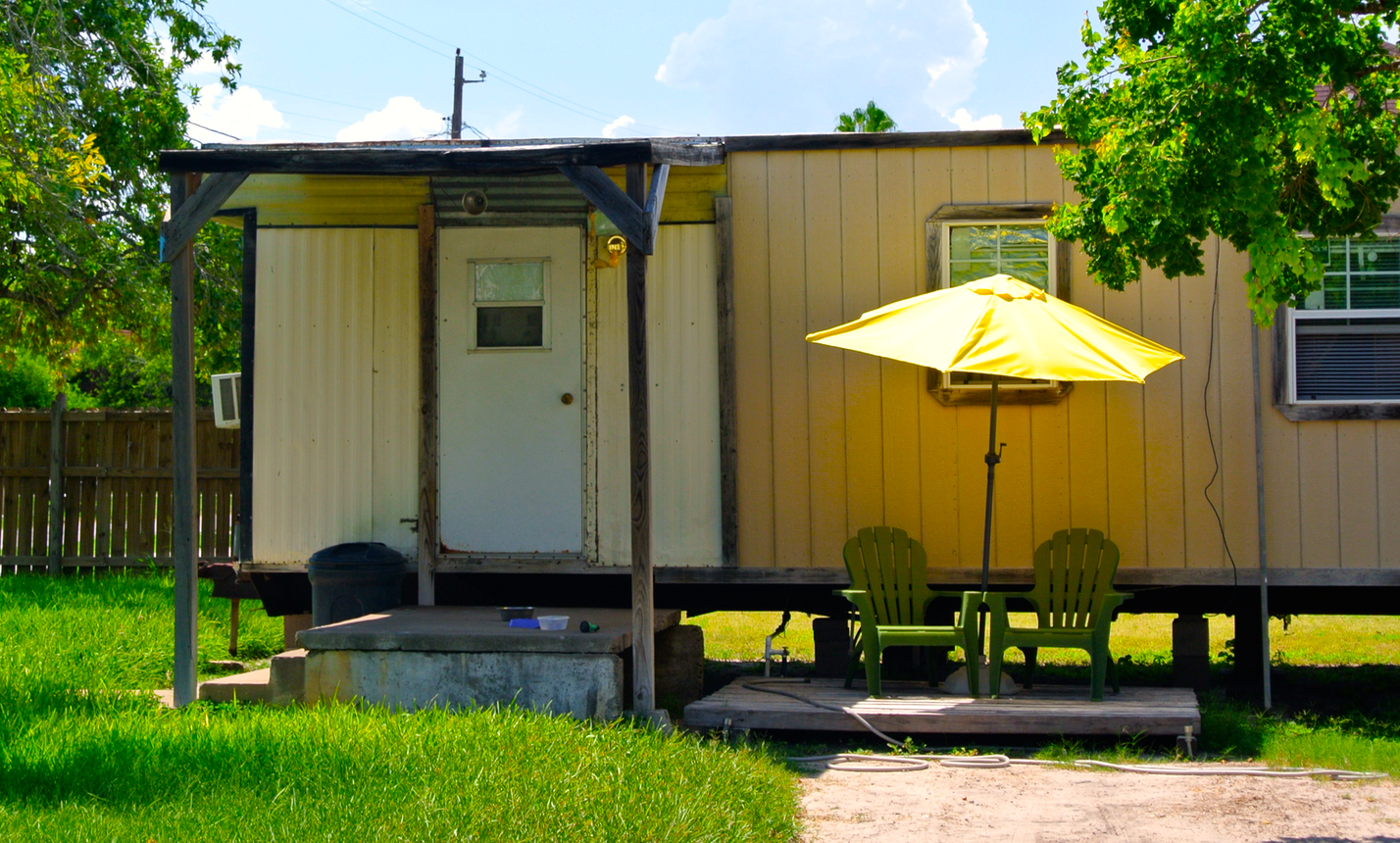 These lawn chairs, umbrella, and the heat are the only similarities to San Diego, California to be found in San Diego, Texas.

Freer, in northwestern Duval County, is home to not only the world’s largest rattlesnake, but also to Texas’ official Rattlesnake Round-Up. Good to know.