“Because of its location away from the coast and primary trade routes, the future county was not immediately settled by the Spanish. Although land grants in the Trans-Nueces region were made as early as 1767, not until the early 1800s was an effort made to settle the area. Some twenty-four land grants were made in the Jim Hogg County area between 1805 and 1836 by the Spanish and Mexican governments. The earliest on record was made in 1805 by the Spanish government to Xavier Vela and covered what later became south central Jim Hogg County.”

“Between the Texas Revolution and the end of the Mexican War Jim Hogg County lay in the disputed territory between the Rio Grande and the Nueces. Numerous grantees fled to Mexico to avoid the hostilities. Others, able to succeed where many failed, established themselves in the area. Among these early ranchers was Hipólito García, who established the Randado Ranch on land granted him by the Mexican government in 1836.”

“Initially, the advent of Anglo settlers in the early 1830s did little to alter the region’s economic or social character. In most cases, the newcomers were integrated into the existing society, either by marriage into wealthy Mexican families or through land purchase. Moreover, unlike the situation in other South Texas counties, Anglo settlers in the area did not immediately displace resident Hispanic ranchers, many of whom kept their land and political power well into the twentieth century.” 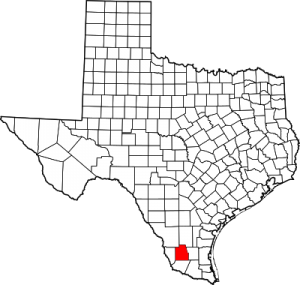 “Immediately after the end of the Mexican War all of the land in the disputed territory was officially made part of the state of Texas. At various times the area that is now known as Jim Hogg County was under the jurisdiction of Brooks, Duval, Starr, Zapata, Live Oak, and Hidalgo counties. When Duval County was organized in 1875 it included what is now Jim Hogg, Jim Wells, and Brooks counties.”

“Part of the area was included in Brooks County when it was formed in 1911, but in 1913, in an effort to free themselves from the political dominance of Edward C. Lasater, D. D. David, Reuben Holbein, Oscar Thompson, and A. C. Jones requested from the state legislature that a county separate from Brooks County be formed. D. W. Glasscock, in his first term as a state representative, sponsored legislation establishing Jim Hogg County, in order for his constituents “to get out from under the domination of the Mexican vote at the other end of the county.”"

“Advocates of the new county argued that they were too far removed from Falfurrias, the county seat of Brooks County, a separation that made it difficult for them and their neighbors to do business. Consequently, Jim Hogg County was formed out of Duval and Brooks counties; land from Duval County was included so that the town of Hebbronville, with its railroad station, could be in the new county. Jim Hogg County was organized and established that same year, and elections for county officials were held in July. At that time the school system was organized, and construction of a county courthouse was started.”

“Despite a growing influx of new residents around the turn of the century, Jim Hogg County was still only sparsely settled at the time of its formation. Before 1880 most of the inhabitants had lived on or around larger ranches.”

“With the increased demand for beef cattle, the completion of the railroad, and the growth of commercial ranching, the population slowly increased. By 1920 the county had some 1,914 inhabitants, of whom approximately 500 resided in Hebbronville.”

“As a result of the fall of livestock prices during the Great Depression the number of ranches in the county declined by nearly a third during the 1930s, and the number of cattle fell to 22,323 by 1940. During the same period, however, the population steadily increased and at the beginning of World War II the county had a population of 5,416. Many of the new residents were recent immigrants from Mexico or Hispanics from the Rio Grande valley, who came to work in the oil industry.”

“In the decades after World War II the county’s economy continued to be largely devoted to ranching and petroleum production. Although the number of ranches continued to decline, largely as the result of consolidations, the number of cattle increased steadily, reaching nearly 50,000 by the early 1980s.”

I was the guest of Hebbronville and Jim Hogg County on August 12, 2014. 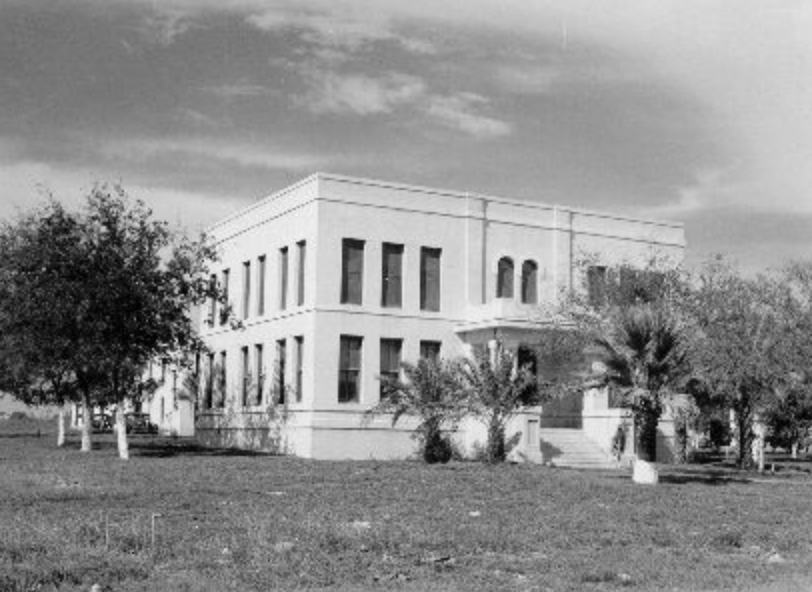 This is the only courthouse to have ever stood in Jim Hogg County. The original structure (as it looked in 1913) had Prairie School architectural influences and came courtesy of San Antonio architect Henry T. Phelps.

However, over the years, the county put it through successive renovations that included a significant redesign. Not only was the exterior stuccoed, but the building soon took on a look more akin to the Classical Revival style.

Besides that stucco, the most profound difference in today’s version from the Henry Phelps design was the expansion of the original one-story porch to two-stories. Construction was provided by Ewing & Magee of Corpus Christi. 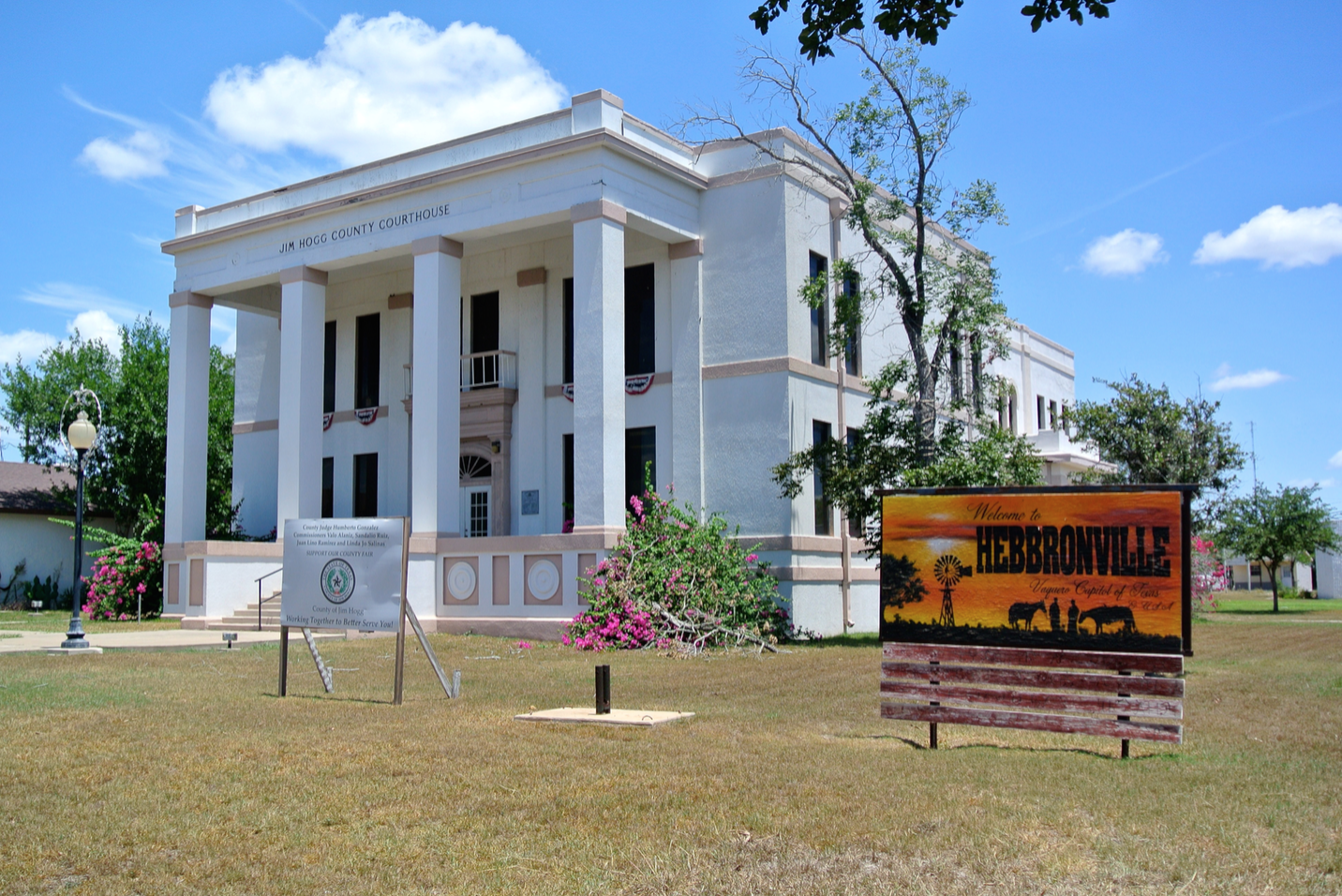 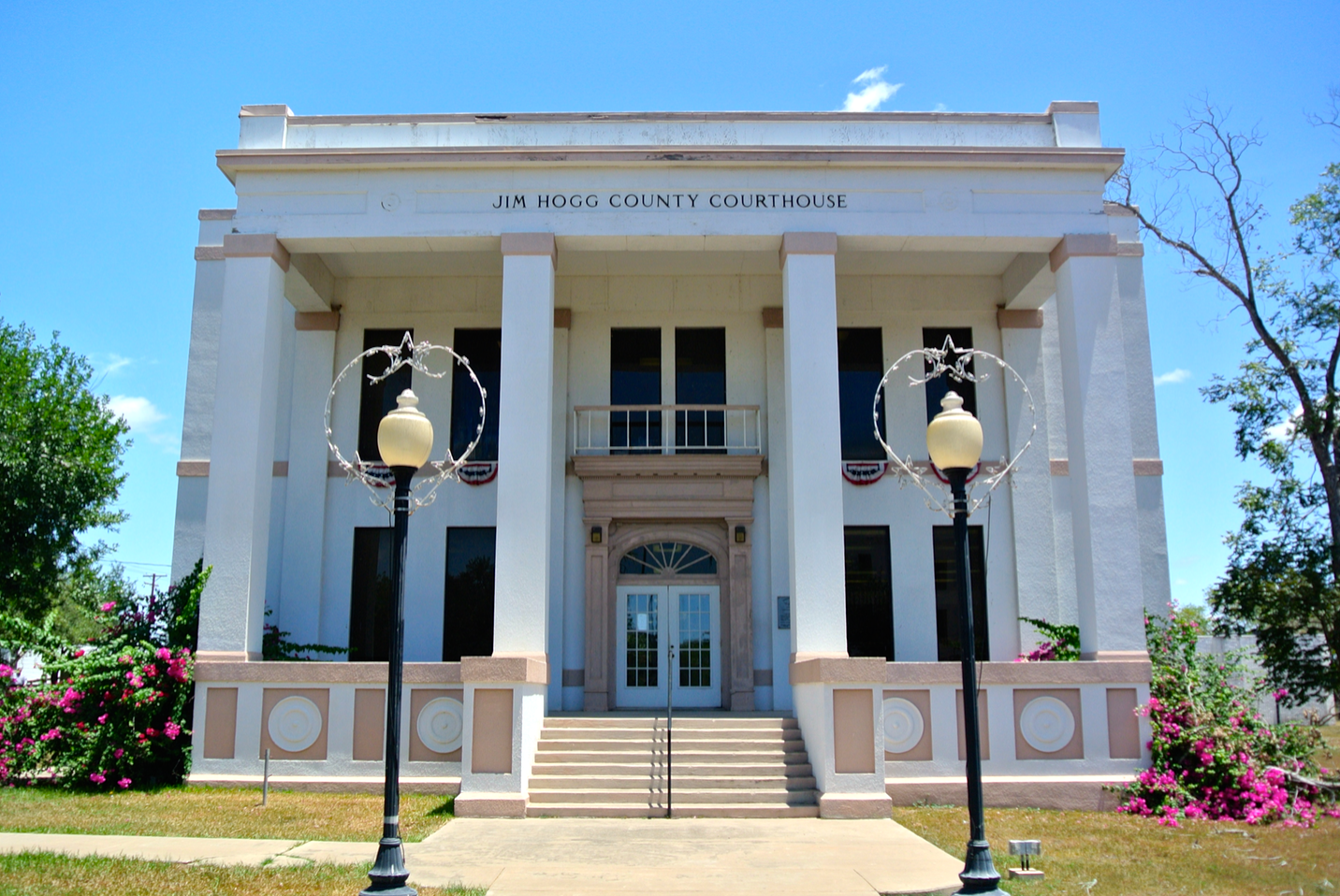 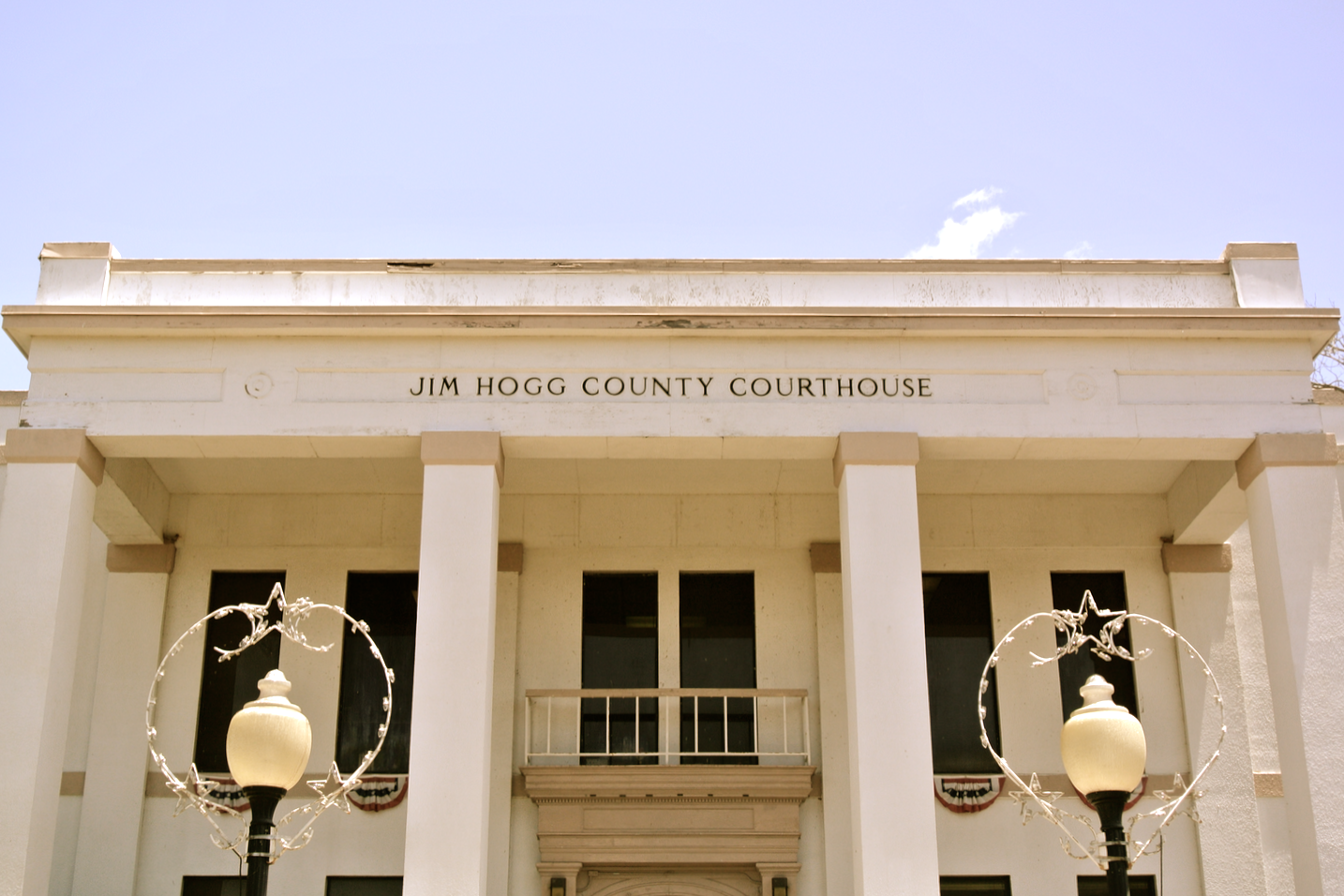 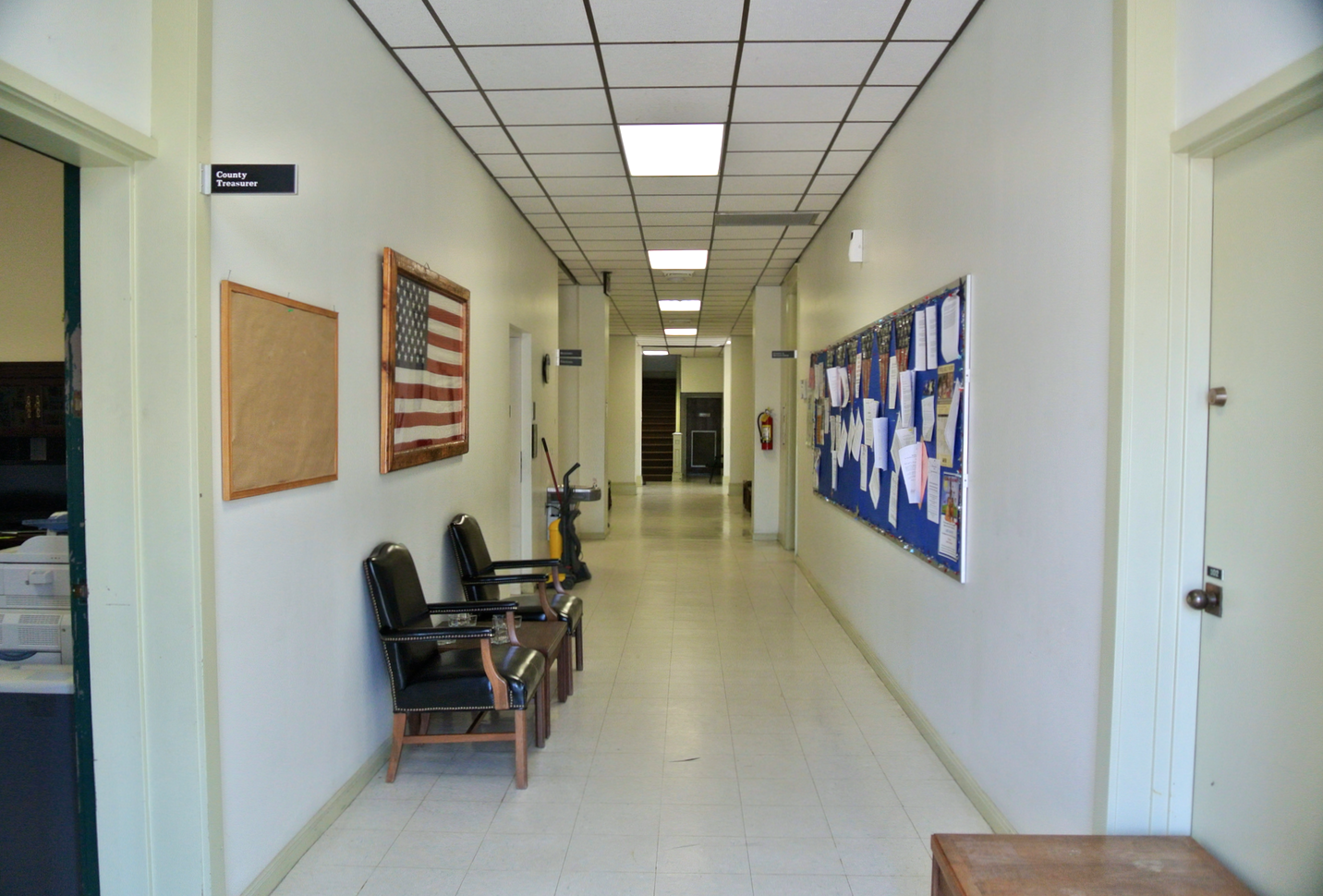 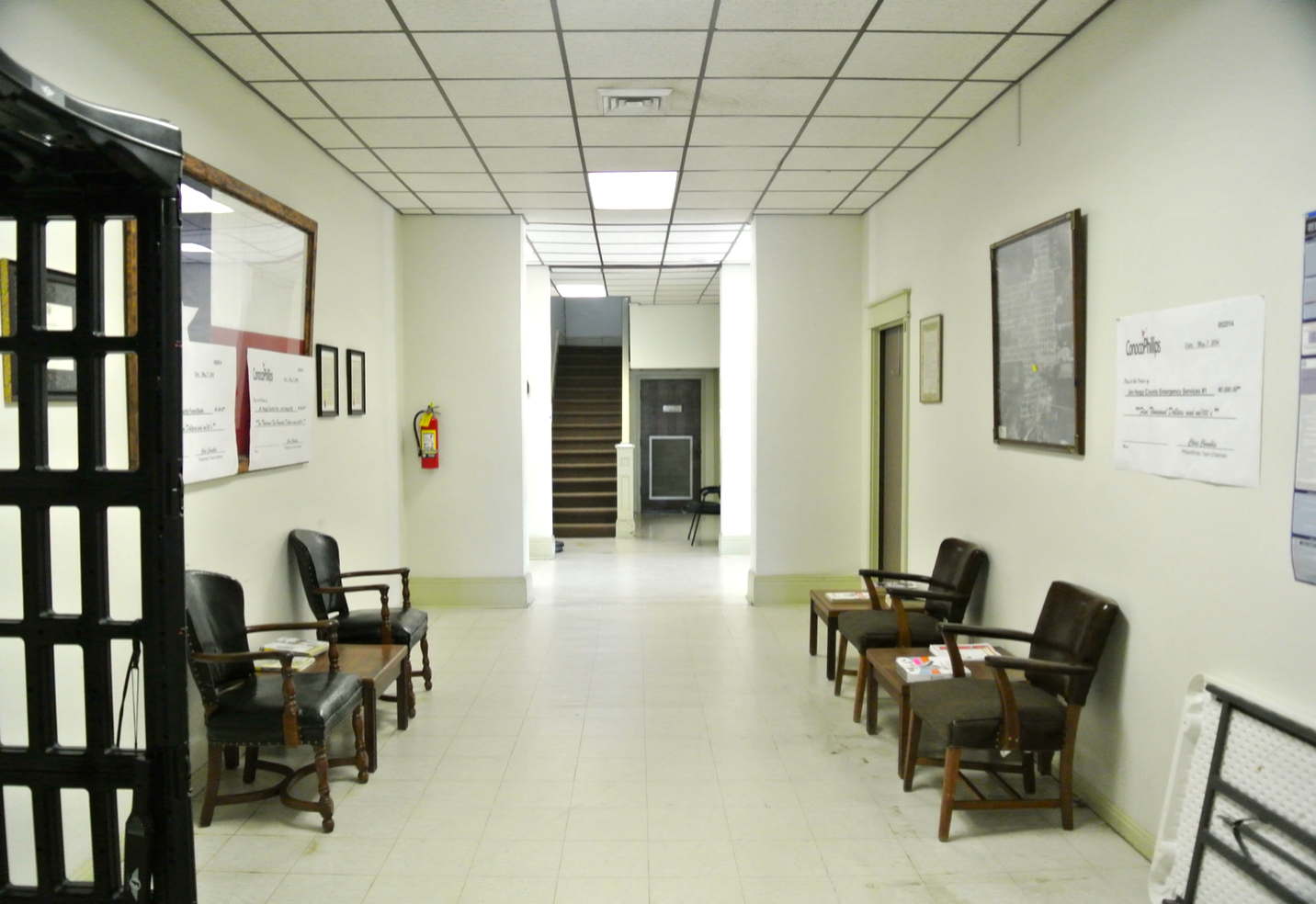 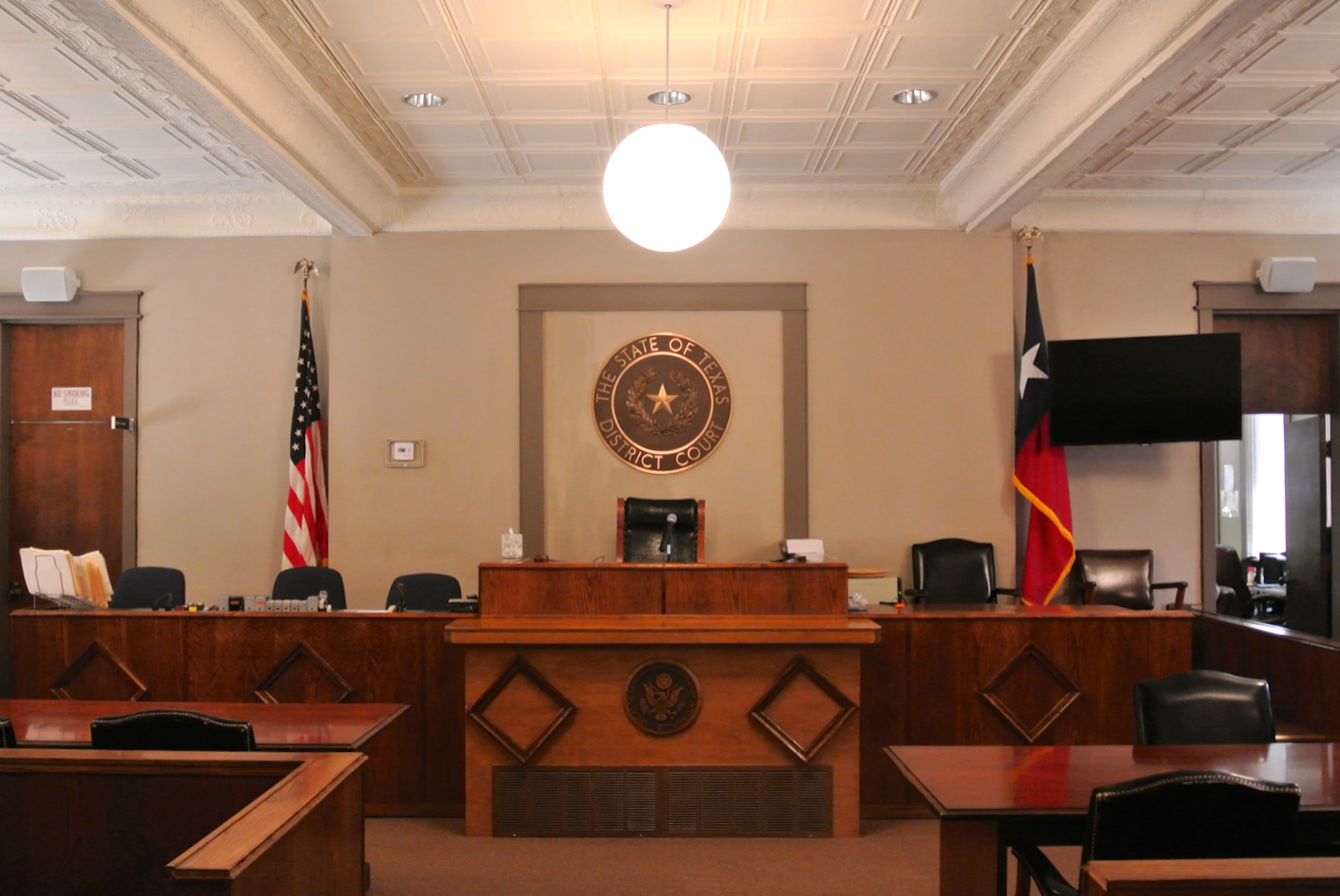 Interior-wise, the stately ceiling in the courtroom is the only reminder that this courthouse dates from 1913. 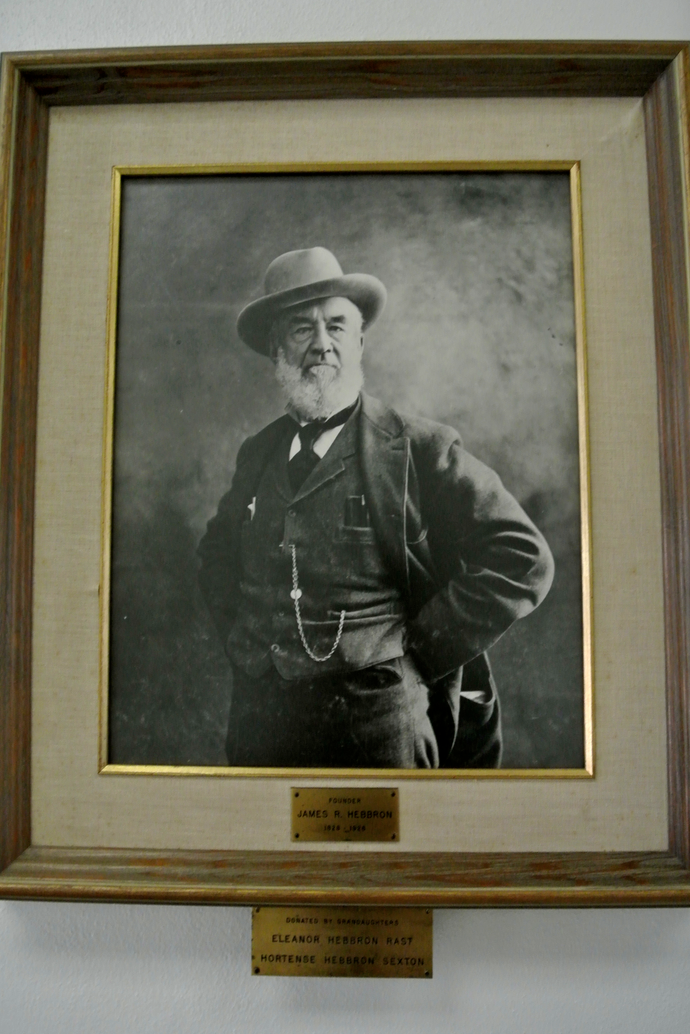 A portrait of James R. Hebbron (the man who donated the land to start the town) hangs on the first floor. 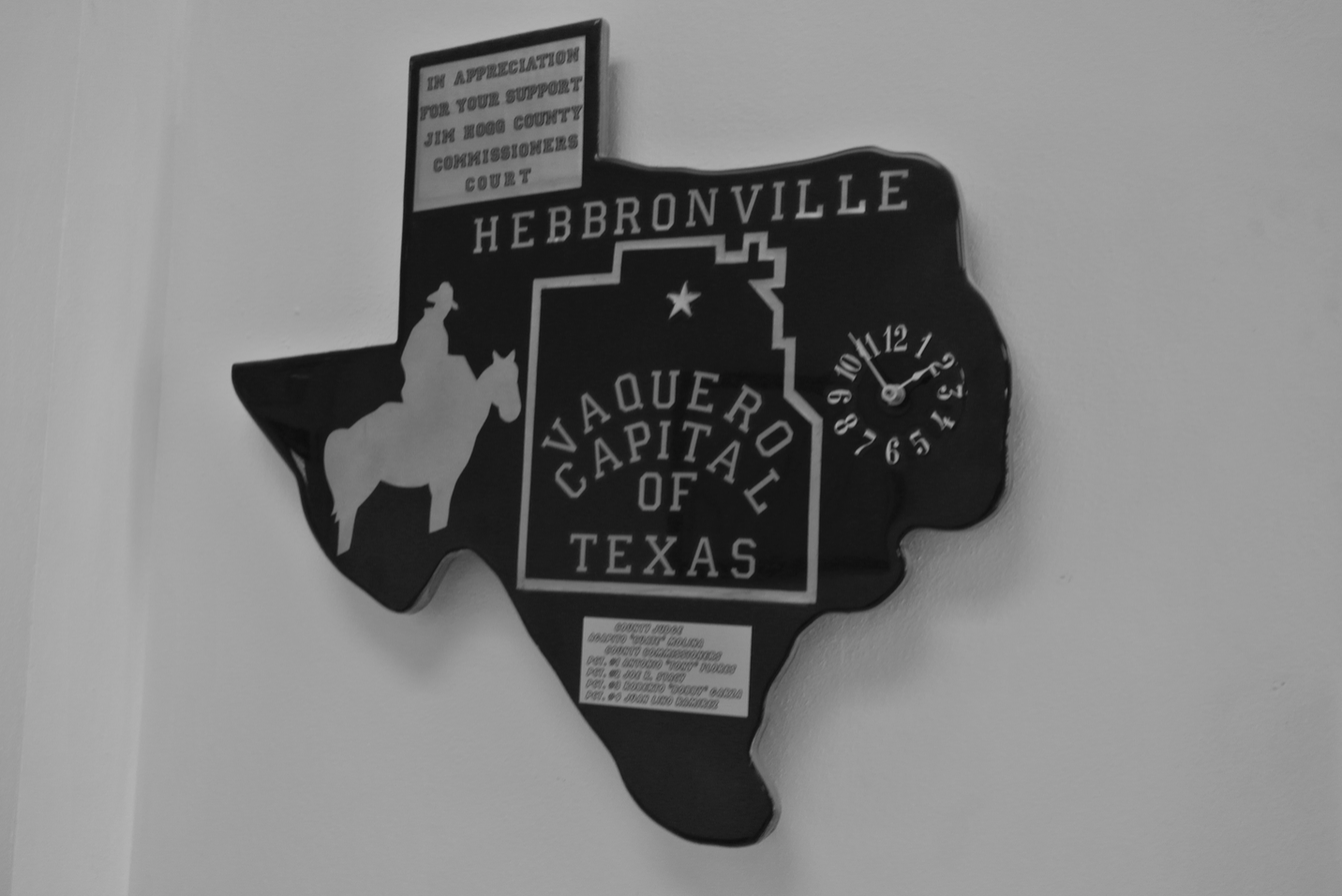 This is Vaquero Country. 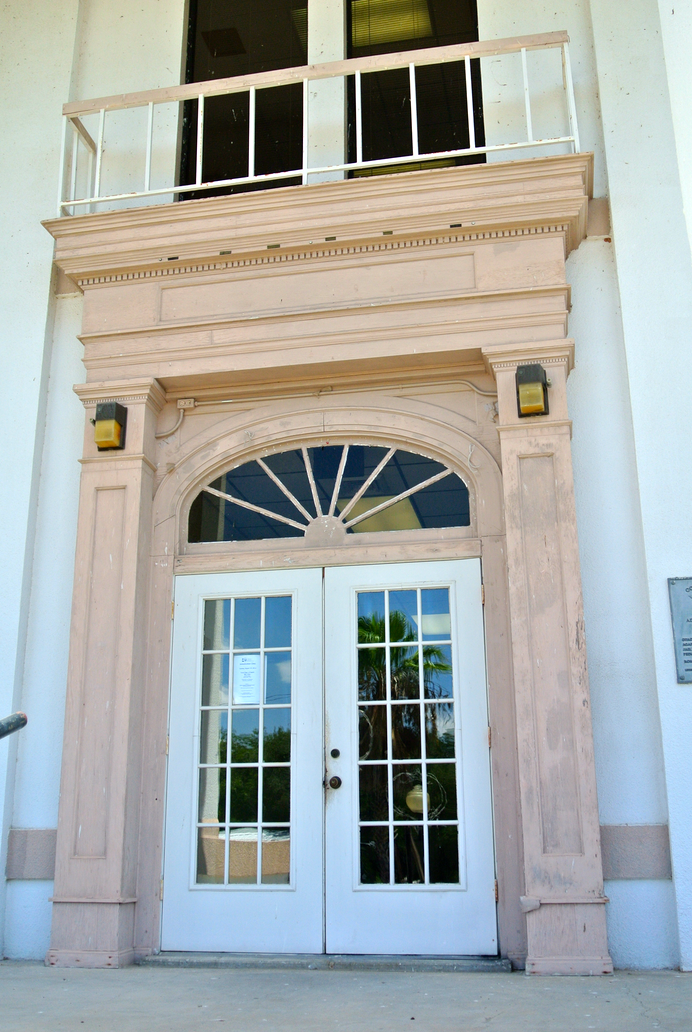 This set of “French Doors” is not original, according to the THC. 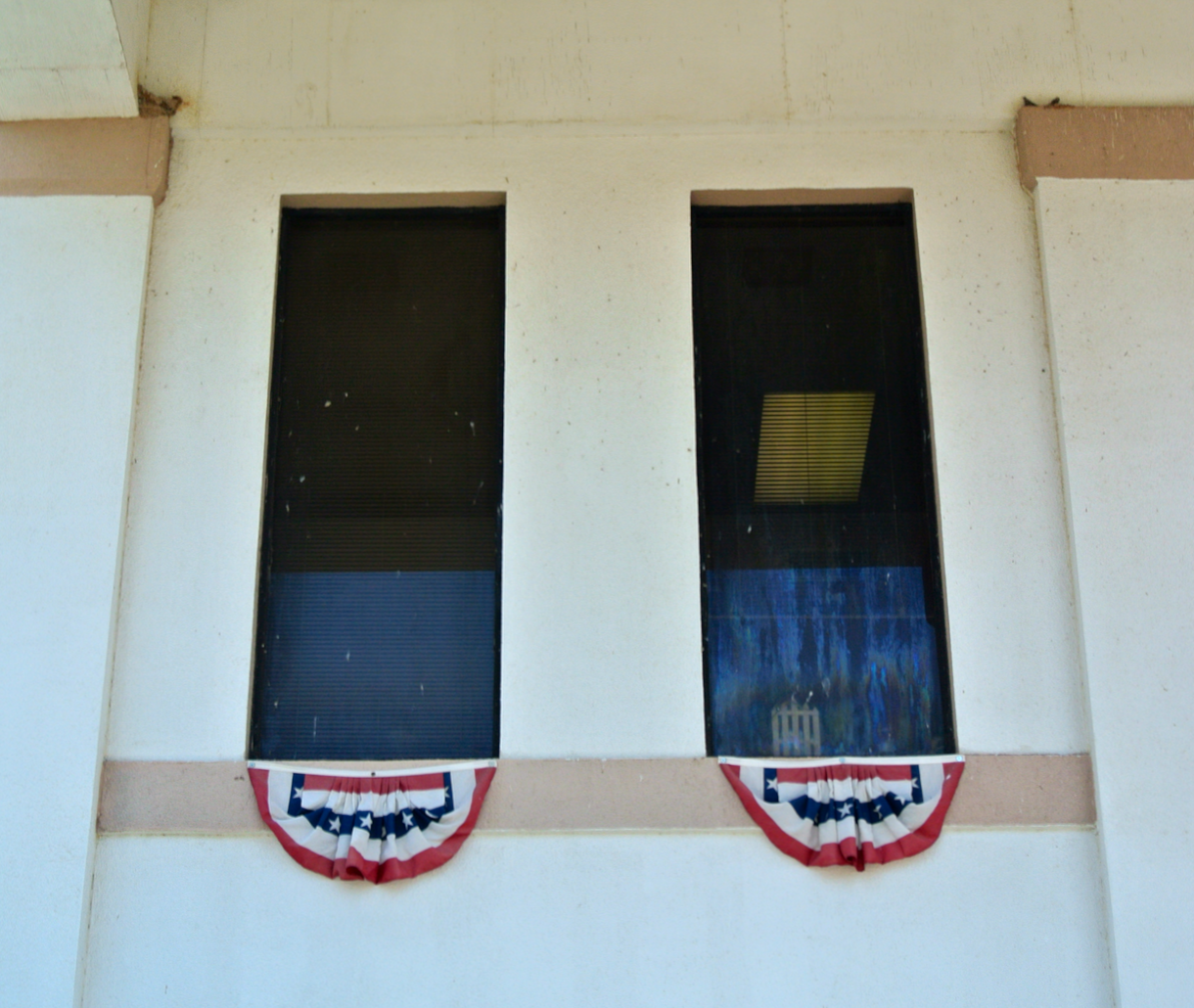 The windows are just pitiful, but at least they’re displaying patriotism. Still, I’m not sure how much those flags cancel out the bird mess and nests. What a shame. 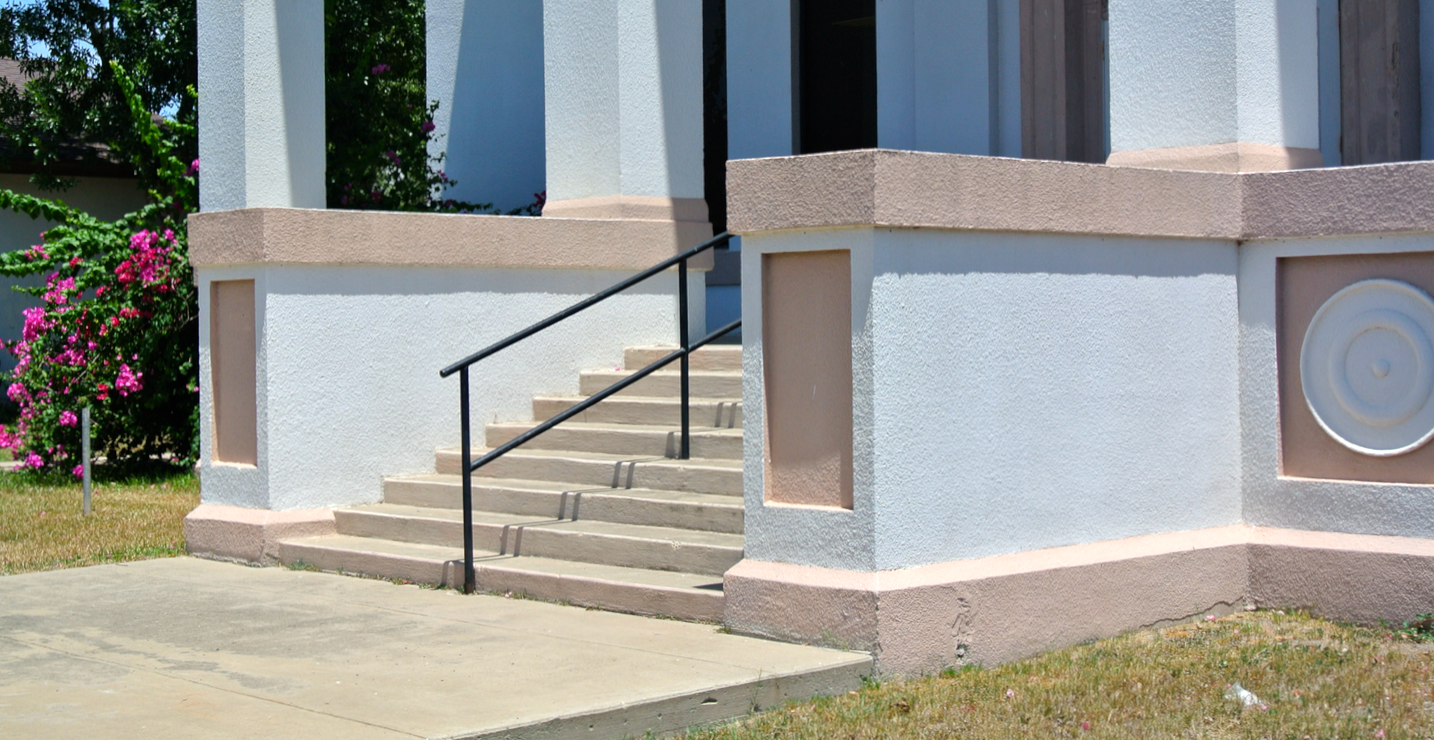 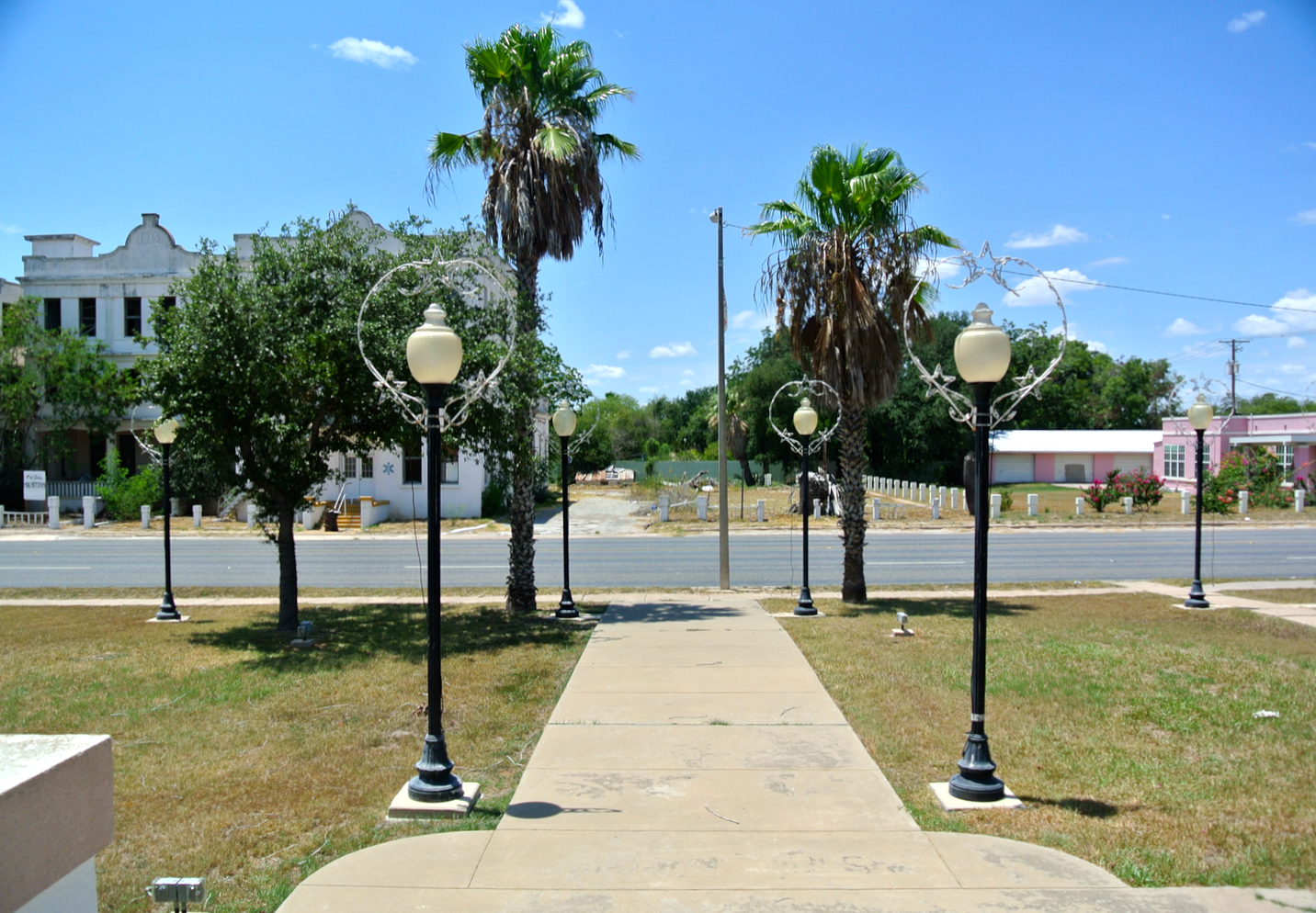 The view from the main doors 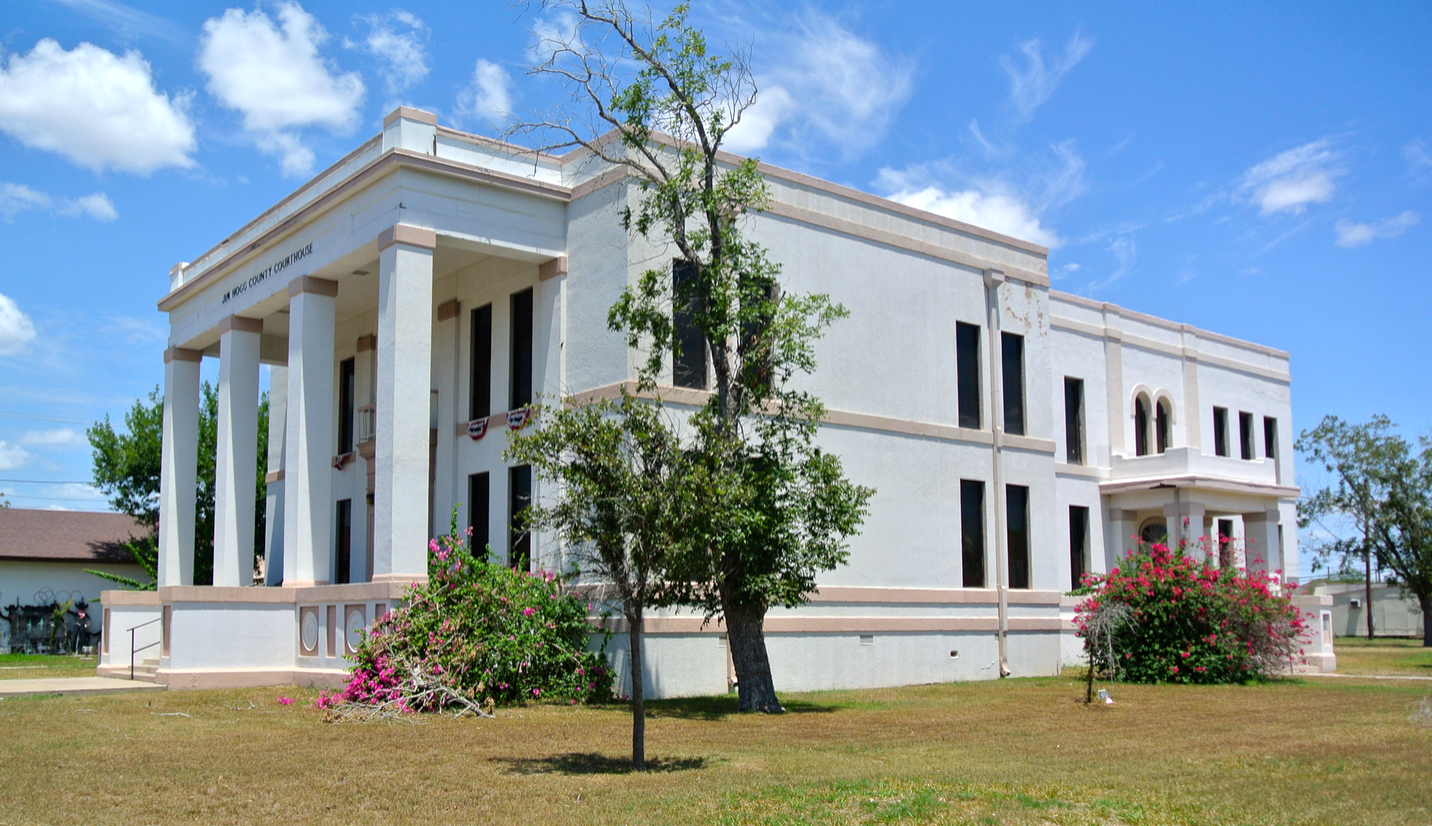 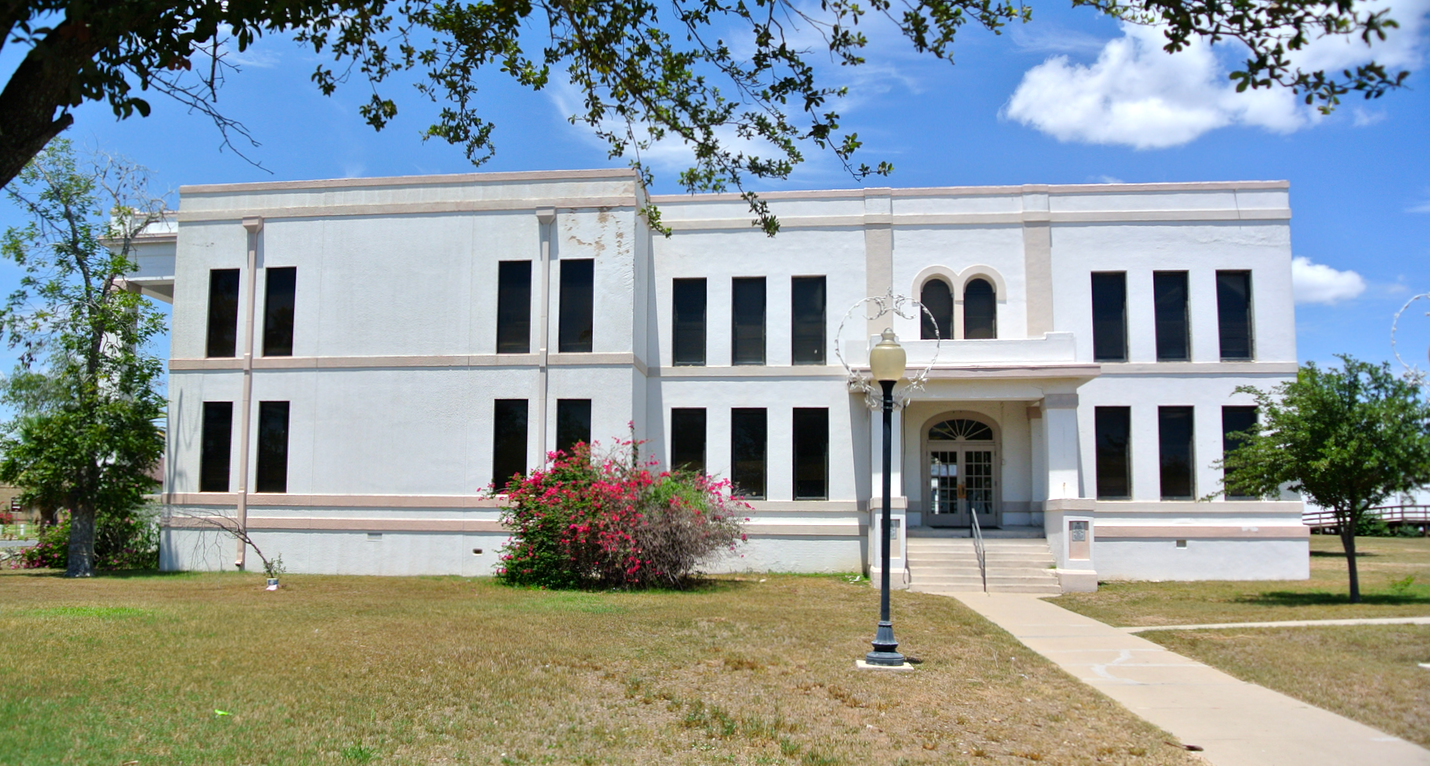 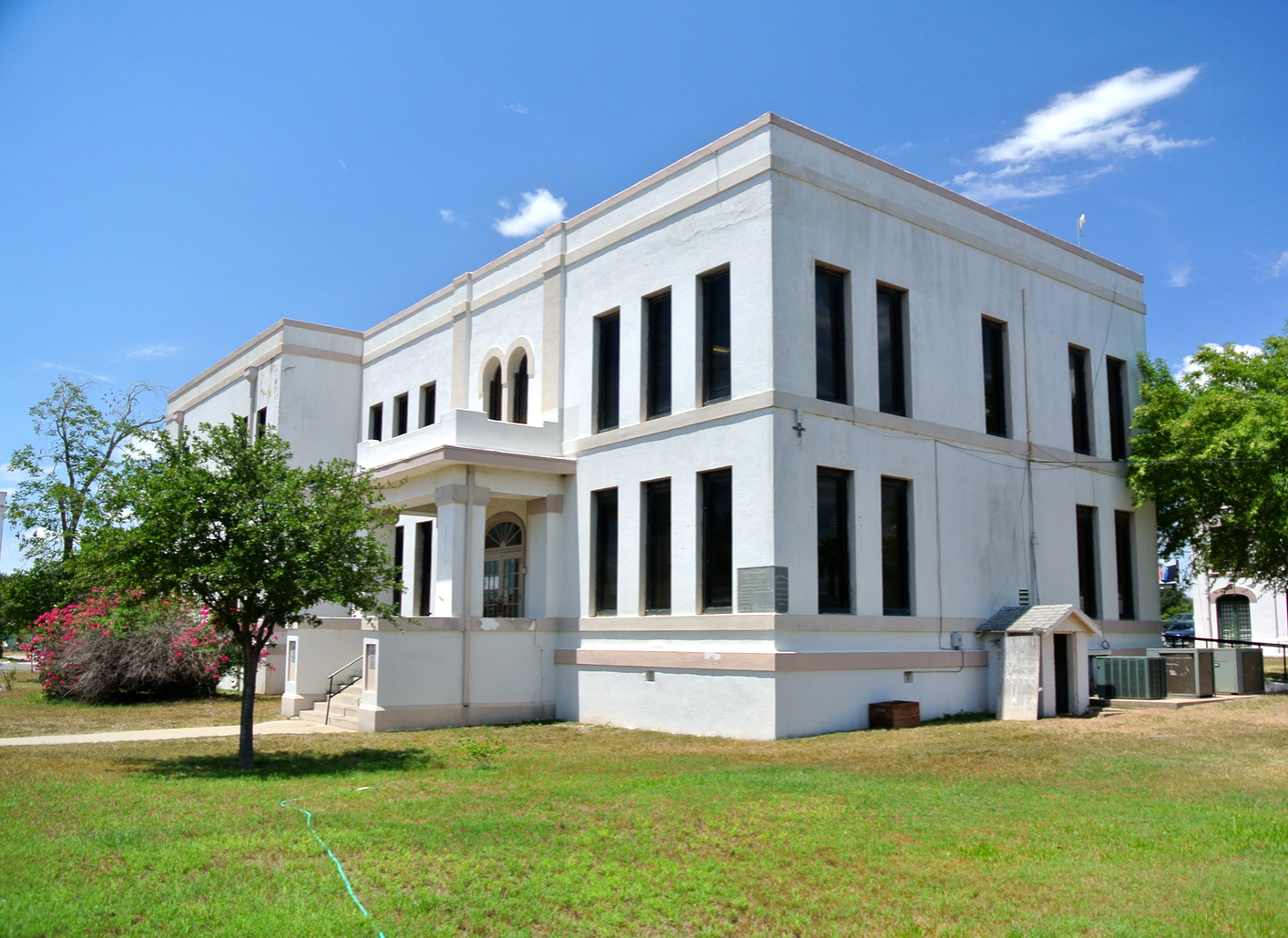 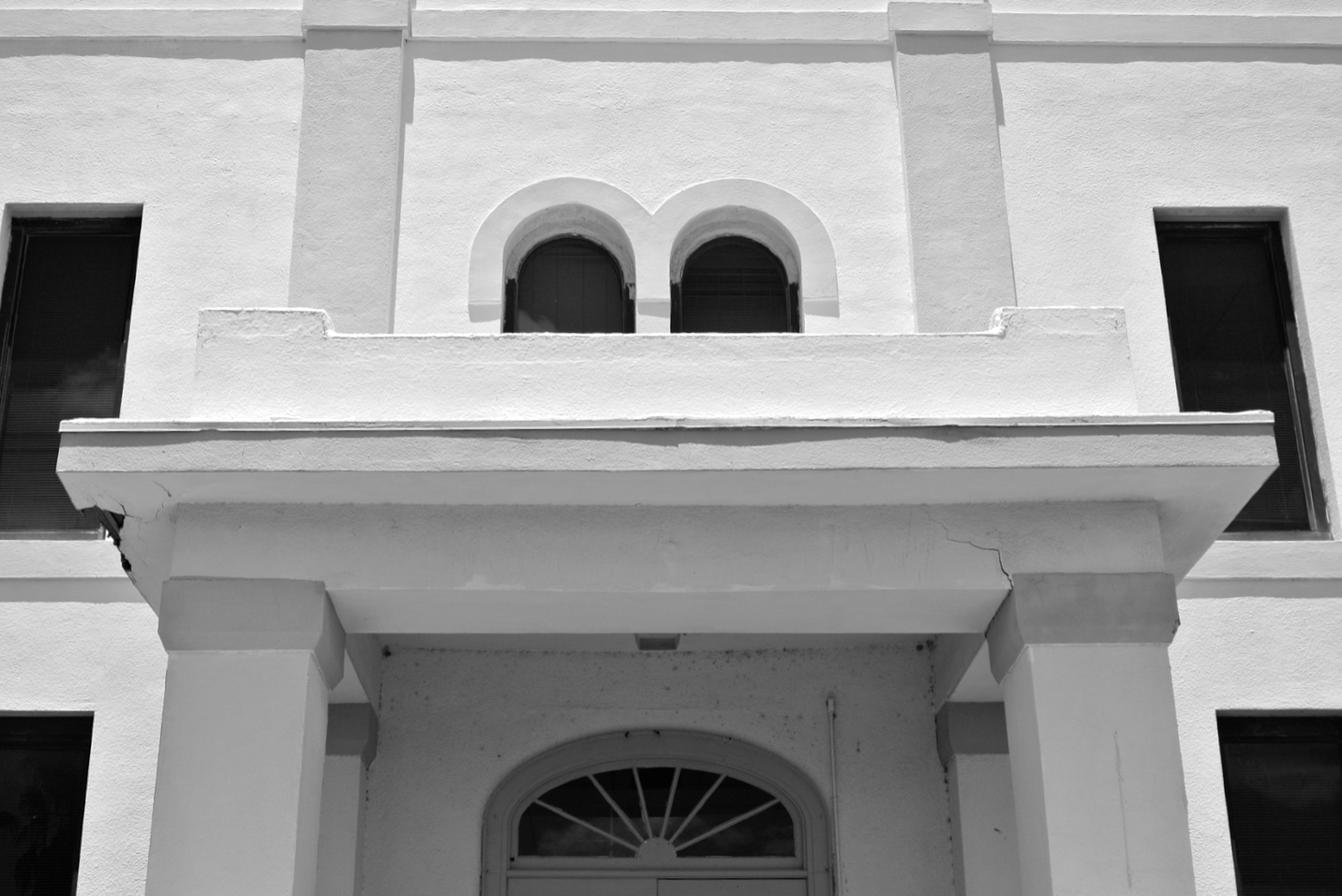 This is the “Jim Hogg County Memorial Building”, which contains offices like the Justice of the Peace and Veterans Affairs among others. This shot of it comes from the courthouse’s southern doors. 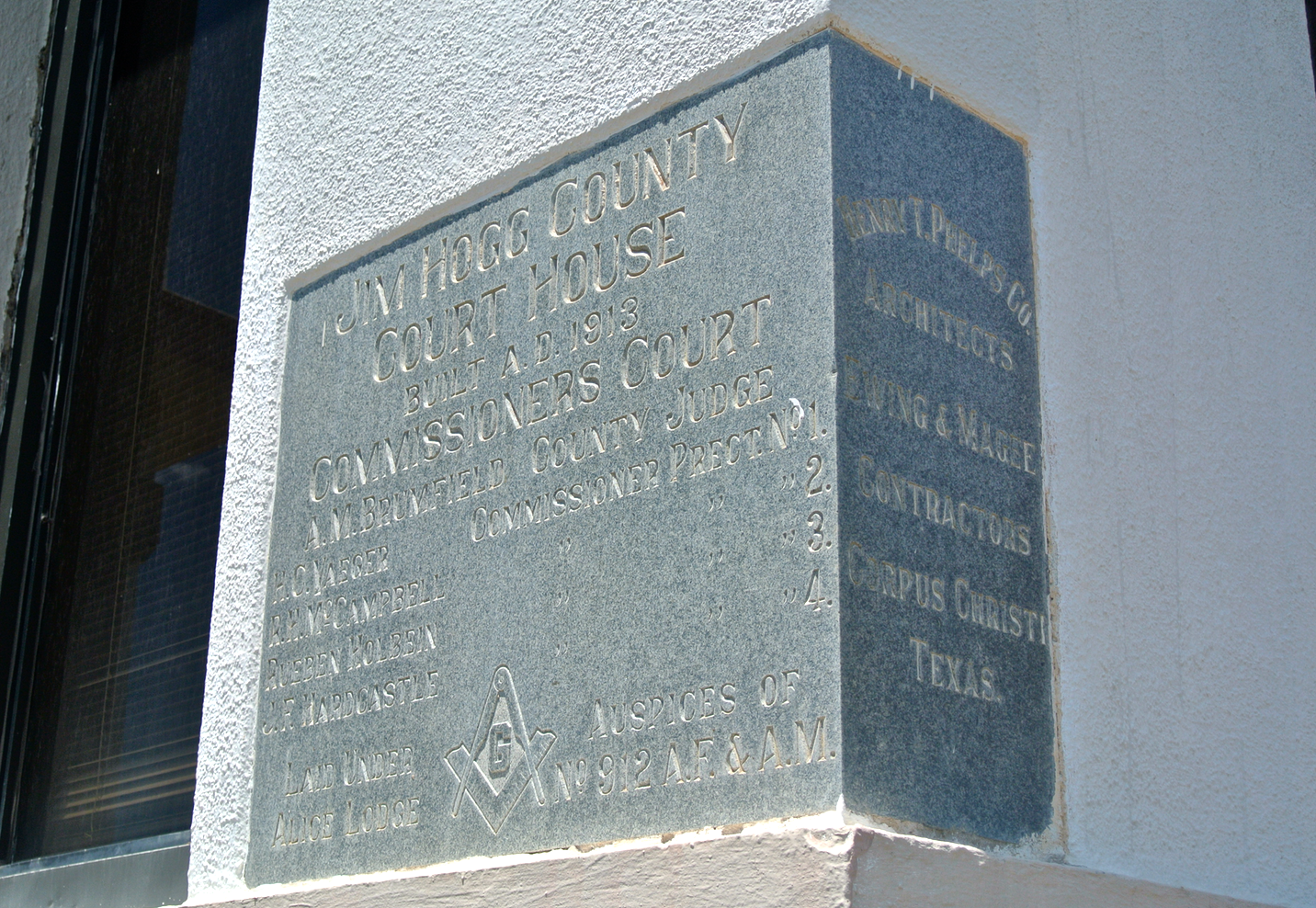 One of the more oddly shaped cornerstones I’ve seen 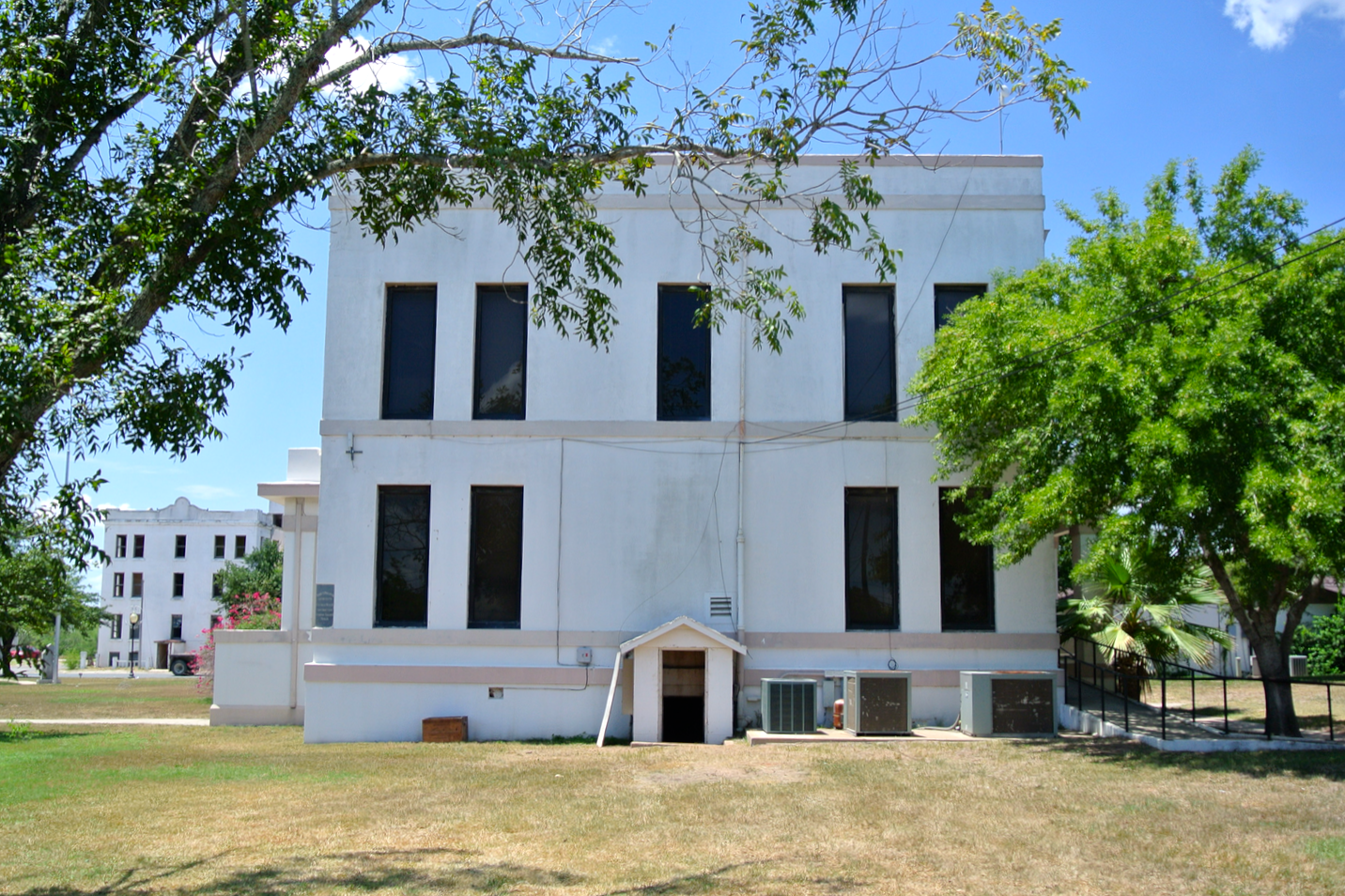 The eastern façade is mostly obscured by small county buildings on the lawn’s eastern edge when viewed from the road. 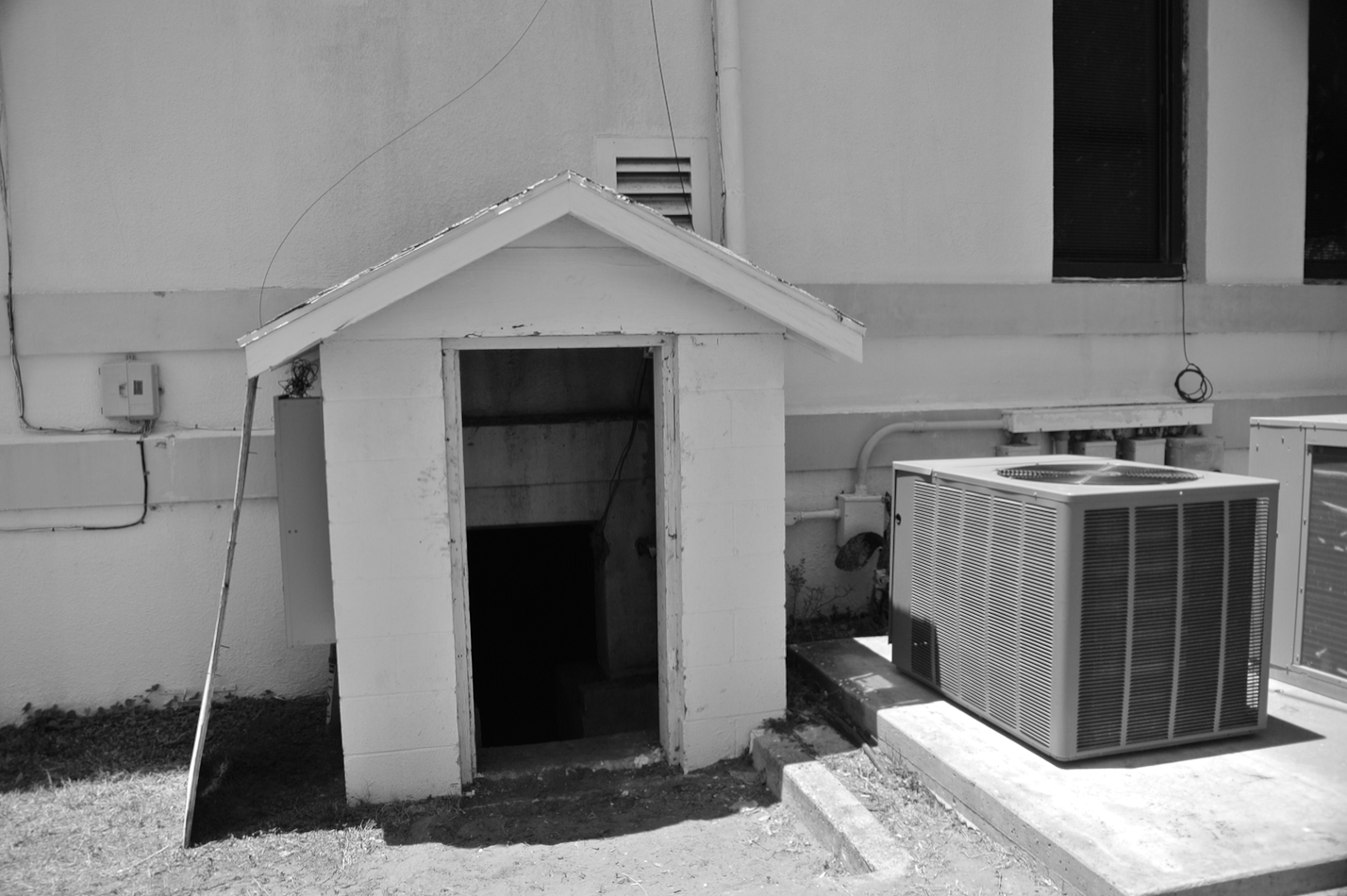 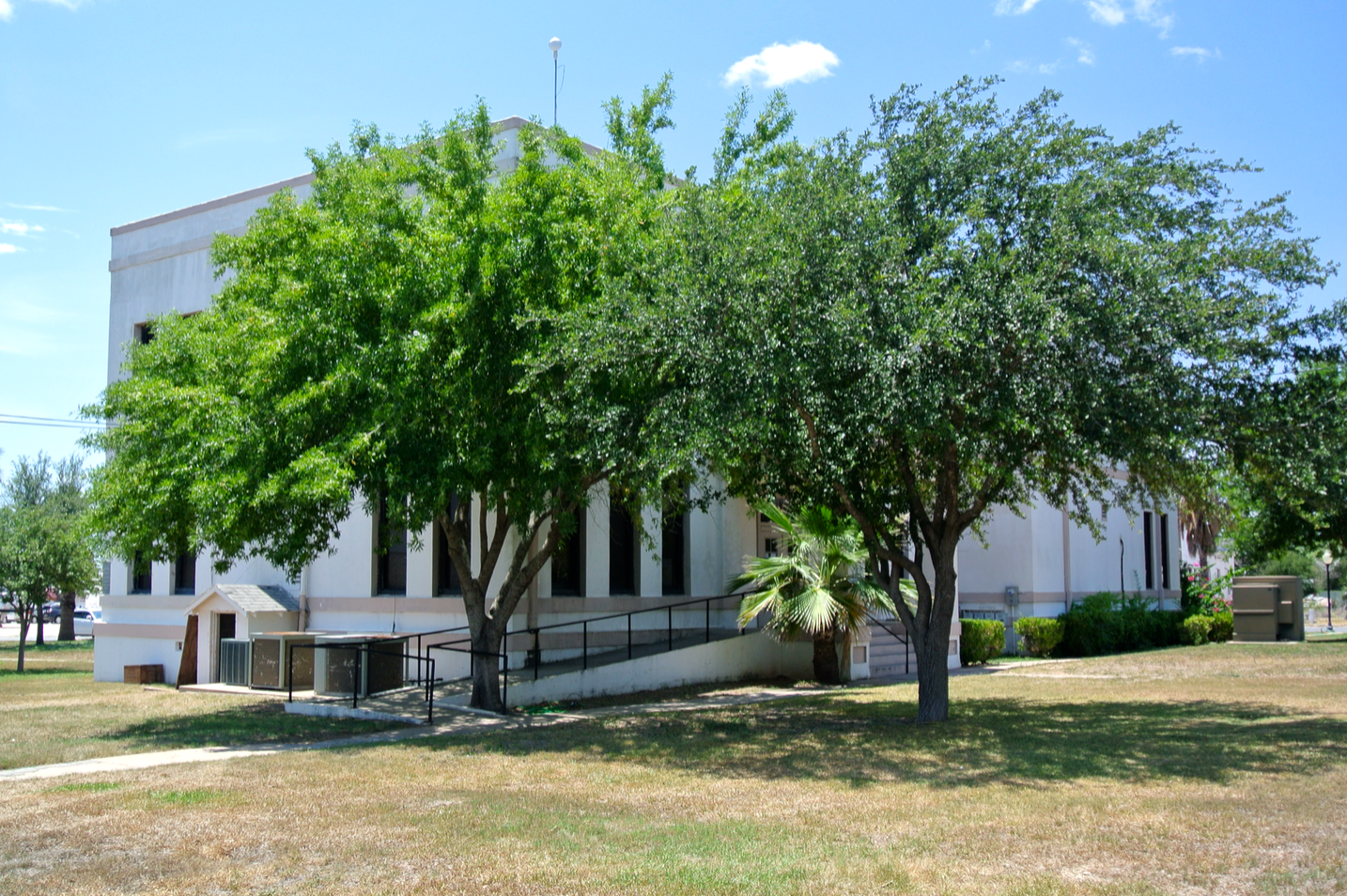 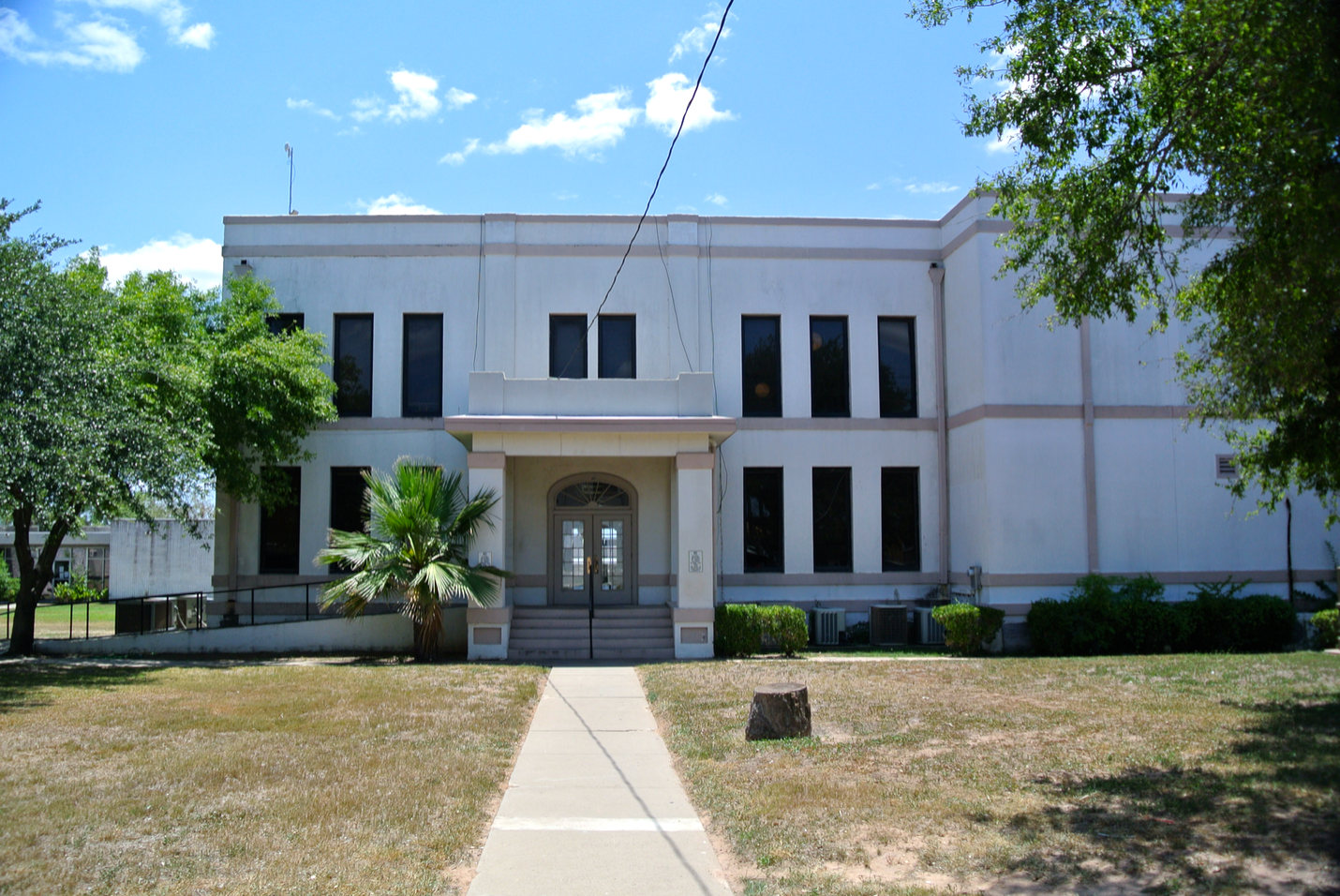 The northern entrance has the most landscaping out of all three. 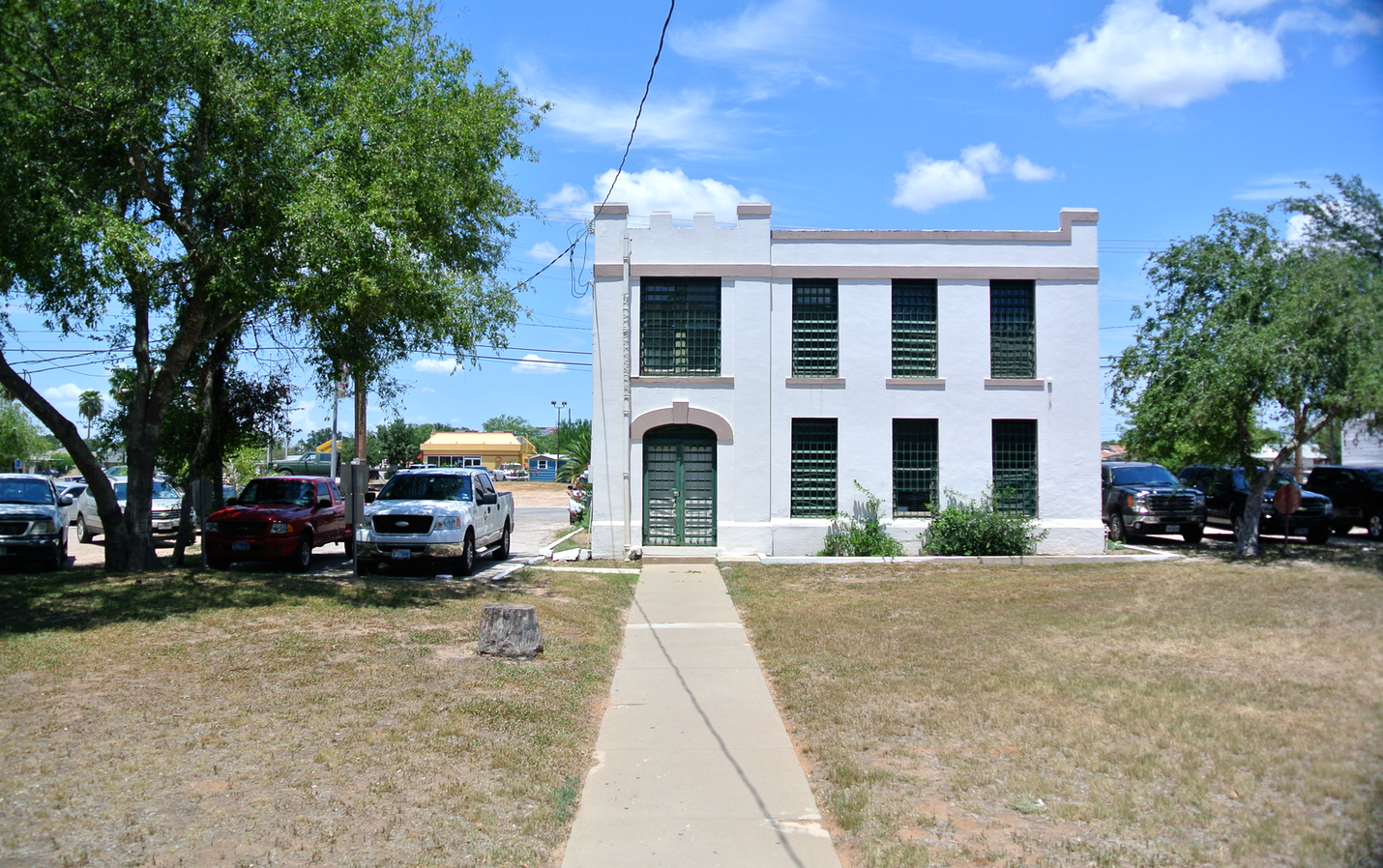 The Jim Hogg County jail looks like it was molded right out of the courthouse itself. This view comes from the northern doors. 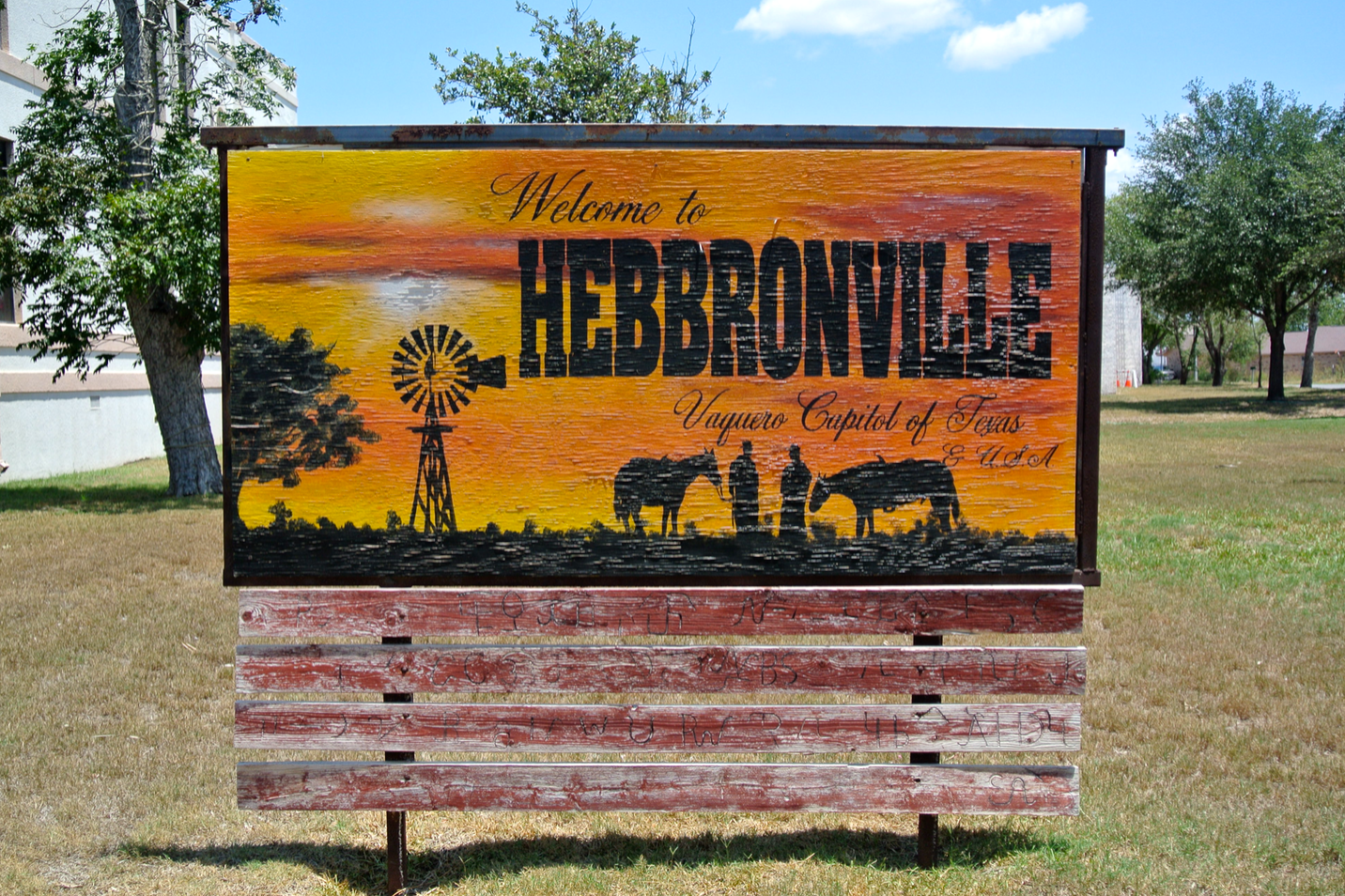 Directly across the street from the courthouse is the abandoned Hotel Viggo (1915). Shortly after it opened for business, hotel owner Viggo Kohler remarkably converted it into a fortress for Hebbronville residents. In those days, the Mexican Revolution was underway and Pancho Villa was  notoriously raiding the South Texas countryside.

And even after the Revolution had ended, the area’s oil boom kept the hotel occupied. As to why it closed, I can’t be sure, but it was up for sale when I visited Hebbronville. 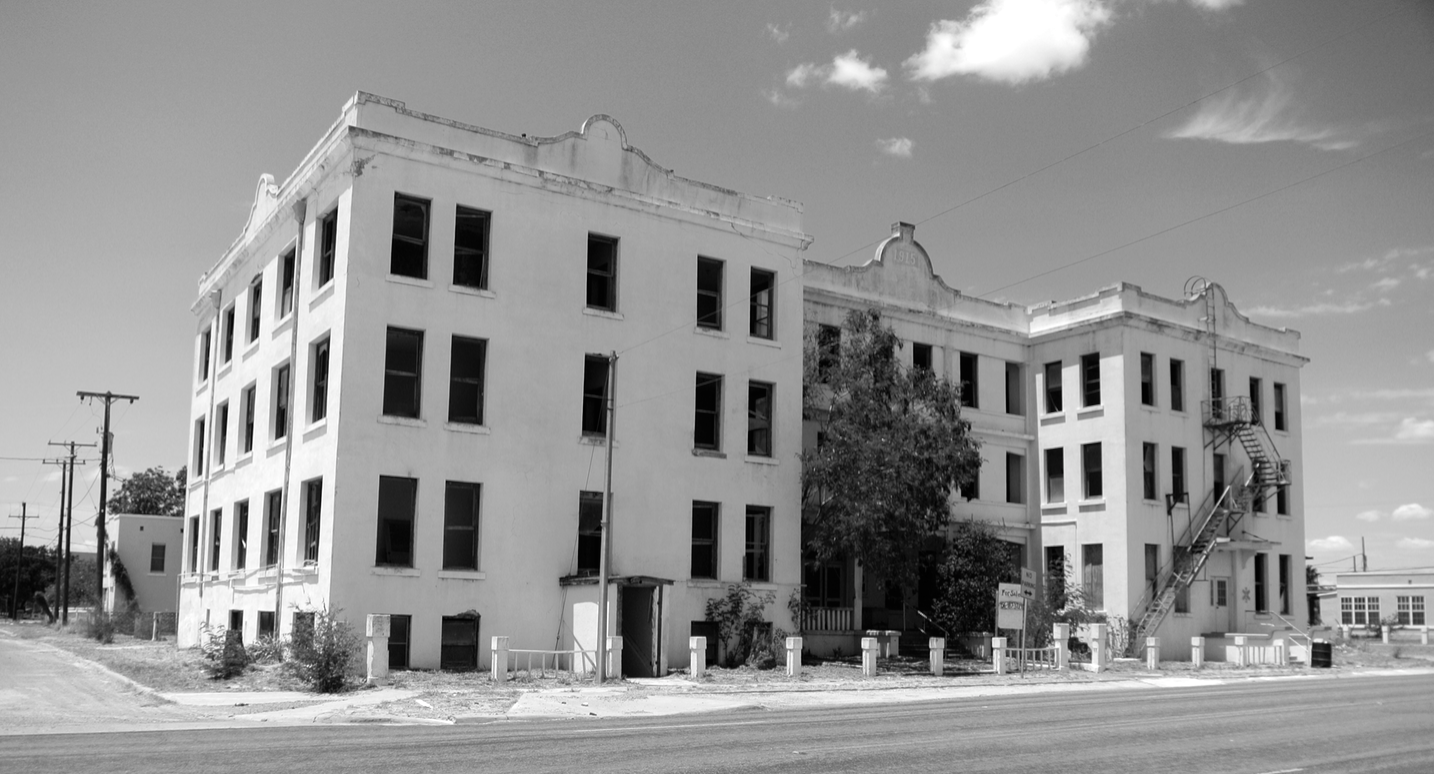 There’s no need to go to LA, because Marilyn’s in Hebbronville.

Our Lady of Guadalupe is a very large church. You can see from the first picture in this collection that it’s visible for a few miles. 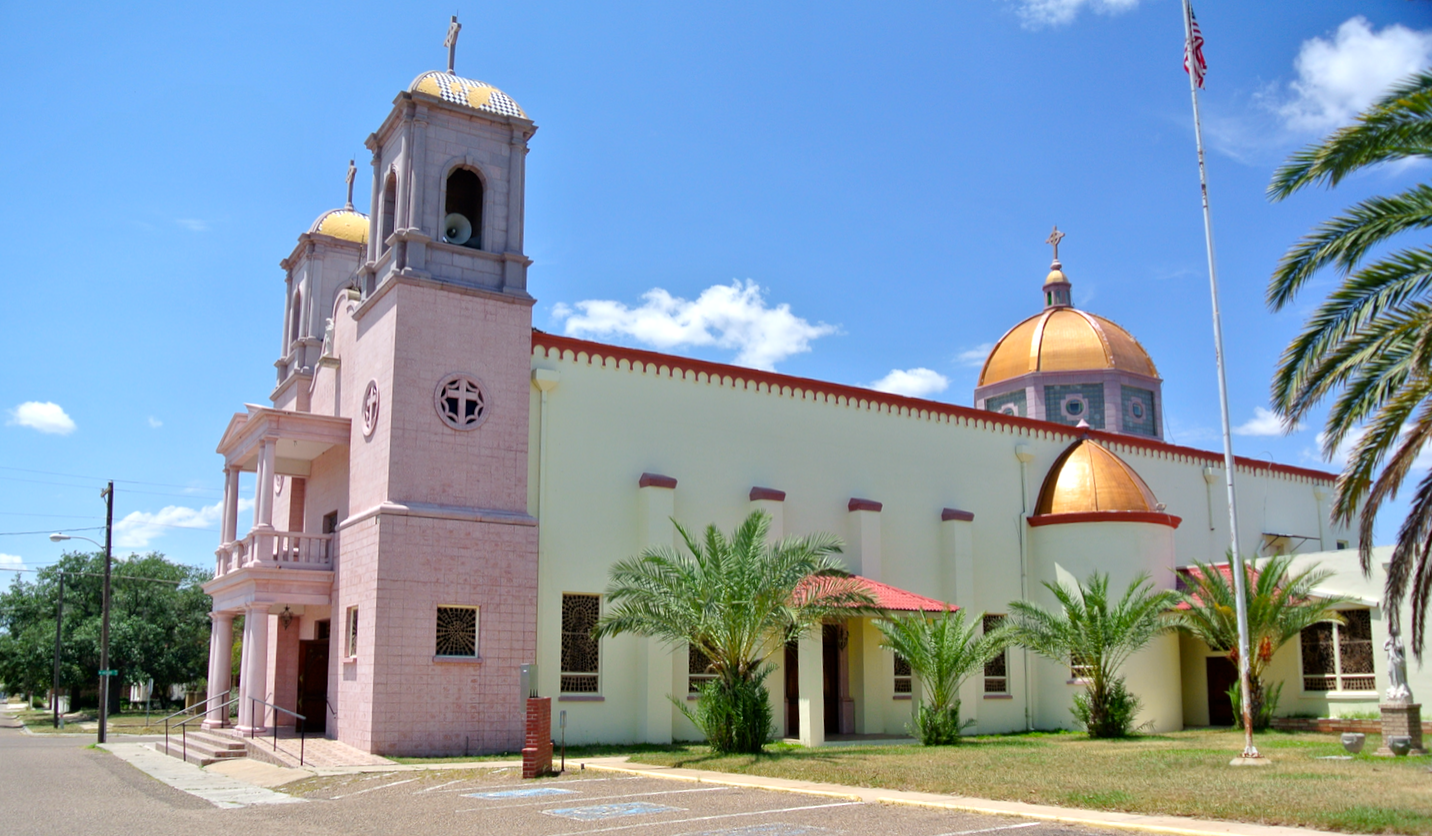 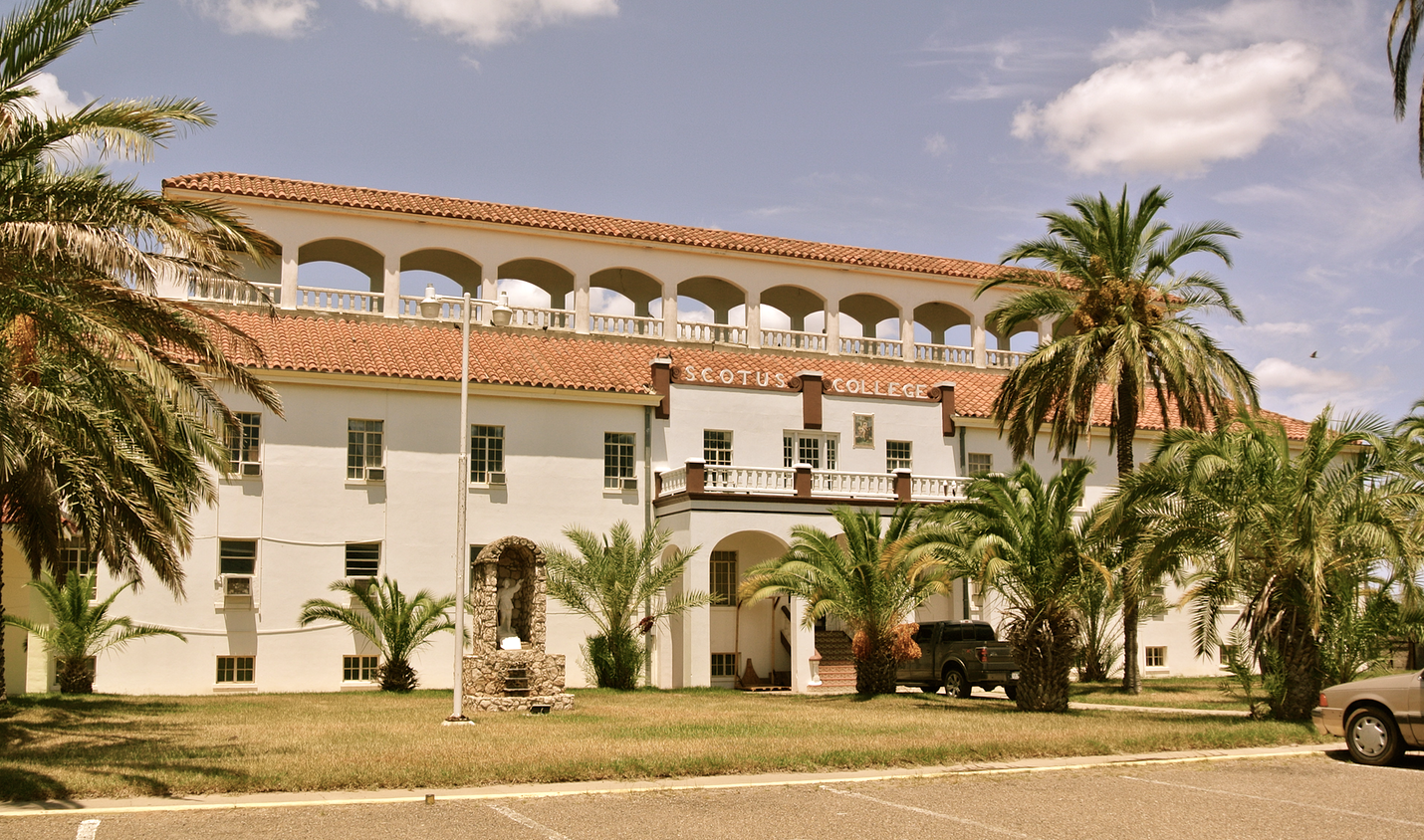 Scotus College, a Franciscan seminary, originally moved to Hebbronville to escape persecution in Mexico. It’s also a large building and stands right next to the church.