“The county, named for Abner S. Lipscomb, embraces 934 square miles of level, rolling, and broken countryside. The soils, which range from sandy loam to black, support a variety of native grasses as well as wheat, grain sorghums, corn, and alfalfa. Wolf Creek, a large perennial stream, flows east across the center of the county to join the Canadian River in Oklahoma.”

“The Kiowas and Comanches dominated the Panhandle until they were defeated in the Red River War of 1873–74; they were forced onto reservations in Oklahoma in 1875 and 1876, after which ranchers moved in.”

“Lipscomb County was formed by the Texas legislature in 1876 from the Bexar District. The county’s first settler was Alex Young, a small-scale rancher who settled on Kiowa Creek in 1877. Later that same year Henry W. Cresswell‘s huge CC Ranch (centered in Roberts and Ochiltree Counties) spilled into the western portion of Lipscomb County. Soon other large ranches appeared: theSeven K, the DAY, the Box T, and the YL all occupied large portions of the county by the end of 1878.”

“In 1887 the Southern Kansas Railway of Texas, a Santa Fe subsidiary, extended a line from Kiowa, Kansas, to Panhandle, Texas. It crossed the southeast corner of Lipscomb County, gave local ranchers access to rail connections, and afforded farmers and small stockmen access to the farmlands in the county. The first town in the county, Lipscomb, was platted in 1887 in anticipation of the arrival of the railroad.” 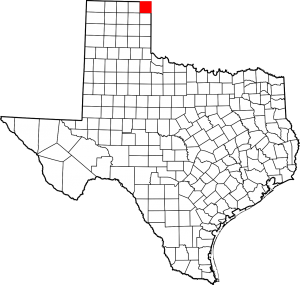 “Settlers continued to arrive throughout the 1880s, and by 1890 sixty-eight farms and ranches encompassing about 51,000 acres had been established in the county. Almost 19,000 cattle were reported on local ranches, while less than 2,000 acres was tilled; about 1,200 acres was planted in corn, the area’s most important crop. The census counted 632 residents that year. A drought in 1889, coupled with the availability of lands around Oklahoma City in 1889 and 1890, led to a migration out of the county, however.”

“By 1893 the population had declined to 1885–87 levels. Lipscomb County entered the twentieth century as a sparsely settled ranching county with a population of 790 and little agriculture. Though 117 farms and ranches were counted in the county in 1900, corn was planted on only 812 acres; 34,279 cattle were reported that year.”

“The construction of a second railroad, the North Texas and Santa Fe, through the county brought more settlers. This railroad, which ran from Shattuck, Oklahoma, to Spearman, Texas, crossed into northern Lipscomb County by 1920 and engendered the farming towns of Follett and Darrouzett in 1917; another town, Booker, was established on the line in 1919. Many Russians of German origin from Kansas entered the northern part of the county at this time, adding a distinct ethnic atmosphere to the new towns.”

“Wheat culture proved profitable between 1900 and 1930. By 1920, 483 farms had been established in Lipscomb County; in 1930 the county’s 525 farms included 476,187 acres, and about 65,300 acres was planted in wheat, which remained the most important crop. Poultry production was also beginning to become important to the local economy. By 1930 almost 51,000 chickens were raised on county farms, and that year local farmers sold almost 245,000 dozen eggs. The census reported 4,512 people living in the county that year.”

“Growth since 1900 was reversed during the 1930s, however, when the Great Depression and the Dust Bowl hammered local farmers. By 1940 only 479 farms remained, and the population of the county had declined to 3,764. The county did grow in size during this time, however. A Supreme Court decision in 1930 stated that the 100th meridian, the eastern border of the Texas Panhandle, was approximately 3,700 feet farther east than previously thought. This strip, 132 miles long, expanded Lipscomb, Wheeler, Hemphill, Collingsworth, and Childress counties and diminished Harmon, Ellis, Beckham, and Roger Mills counties in Oklahoma.”

“The first oil well in the county was drilled in 1956; that year production was 2,280 barrels of crude. A flourishing oil and gas economy subsequently developed.”

“In 2014 the census counted 3,553 people living in Lipscomb County. About 65 percent were Anglo, 31.6 percent were Hispanic, and 1.8 percent were African American. Almost 74 percent of residents 25 and older had completed four years of high school, and more than 5 percent had college degrees. Most of the people in the county are concentrated in the small farming towns of Booker (population 1,595, partly in Ochiltree County), Follett (489), Darrouzett (376), Higgins (428), and Lipscomb (38); Lipscomb is still the county seat. The others live on farms and ranches. Lipscomb hosts a junior livestock show each March.” 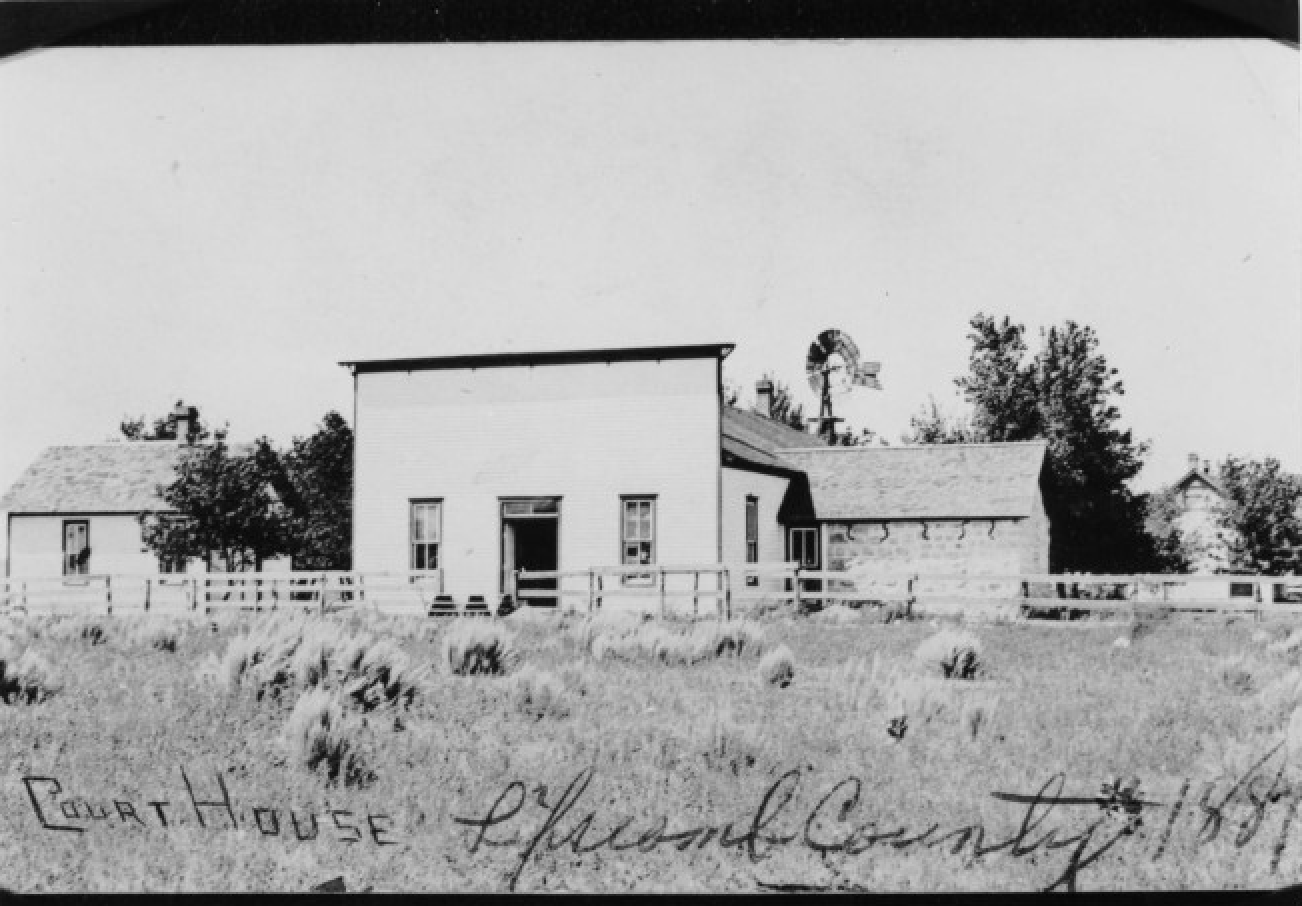 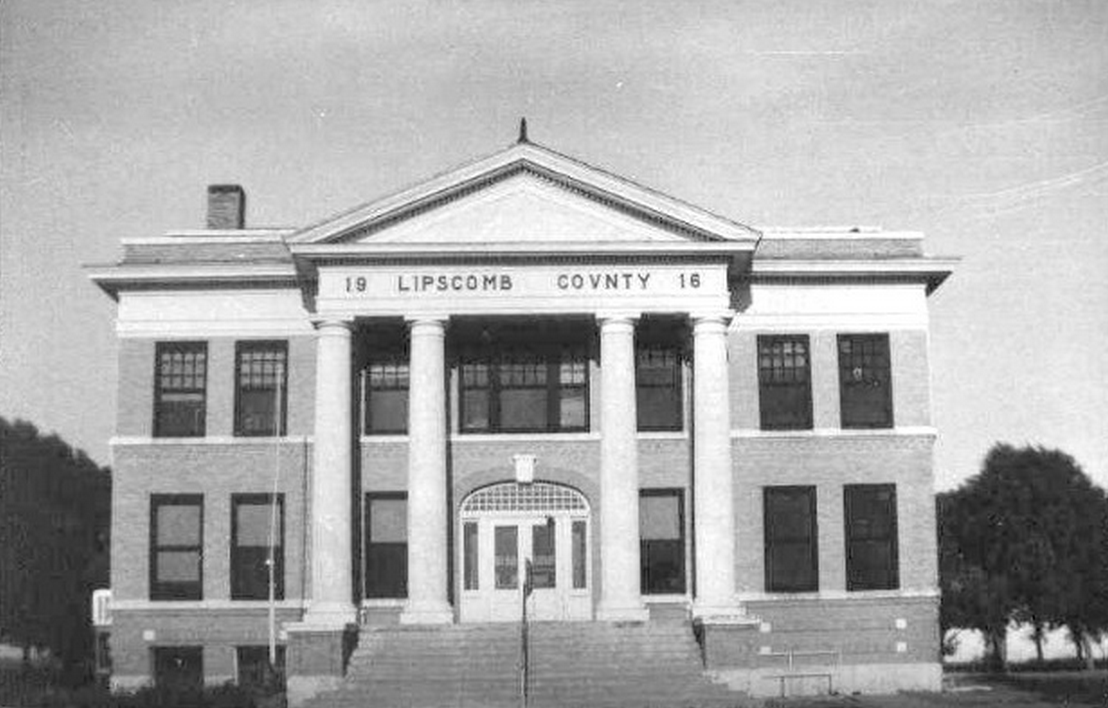 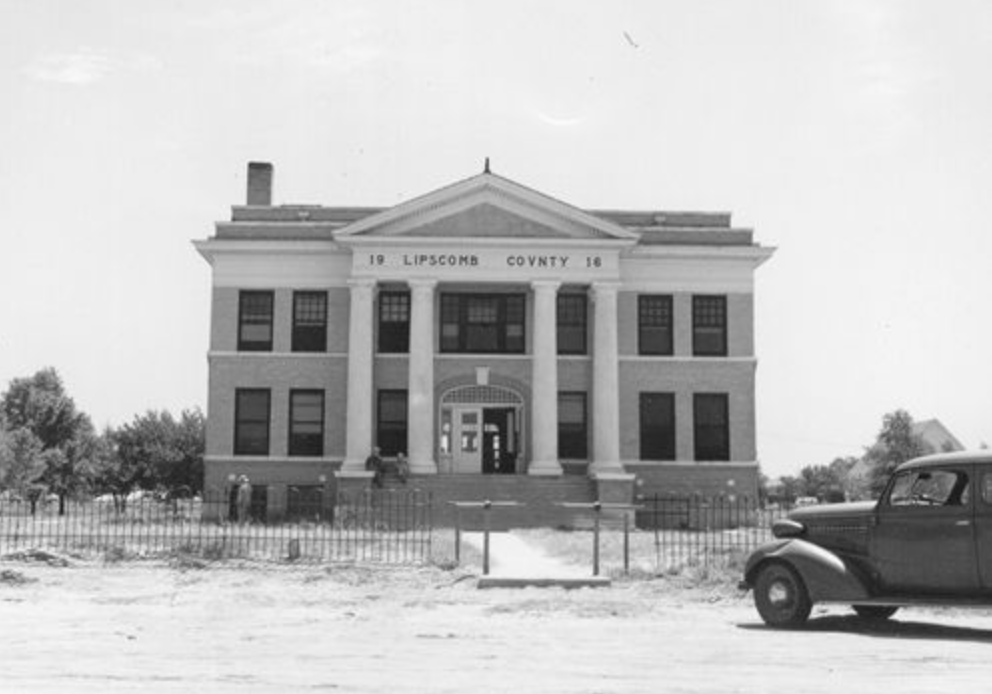 By 1915, Lipscomb County had grown enough that county voters saw it acceptable to approve the issuance of new bonds for a second, larger courthouse. Commissioners duly chose architect William M. Rice of Amarillo to develop a design, and Rice took on the role of contractor as well. In this secondary role, he was supervised by Edward S. Altmiller, who’d built the Lipscomb County Jail six years prior.

Rice’s Classical Revival courthouse was built primarily throughout 1916, but the finishing touches were put on in 1917. It has served ever since. 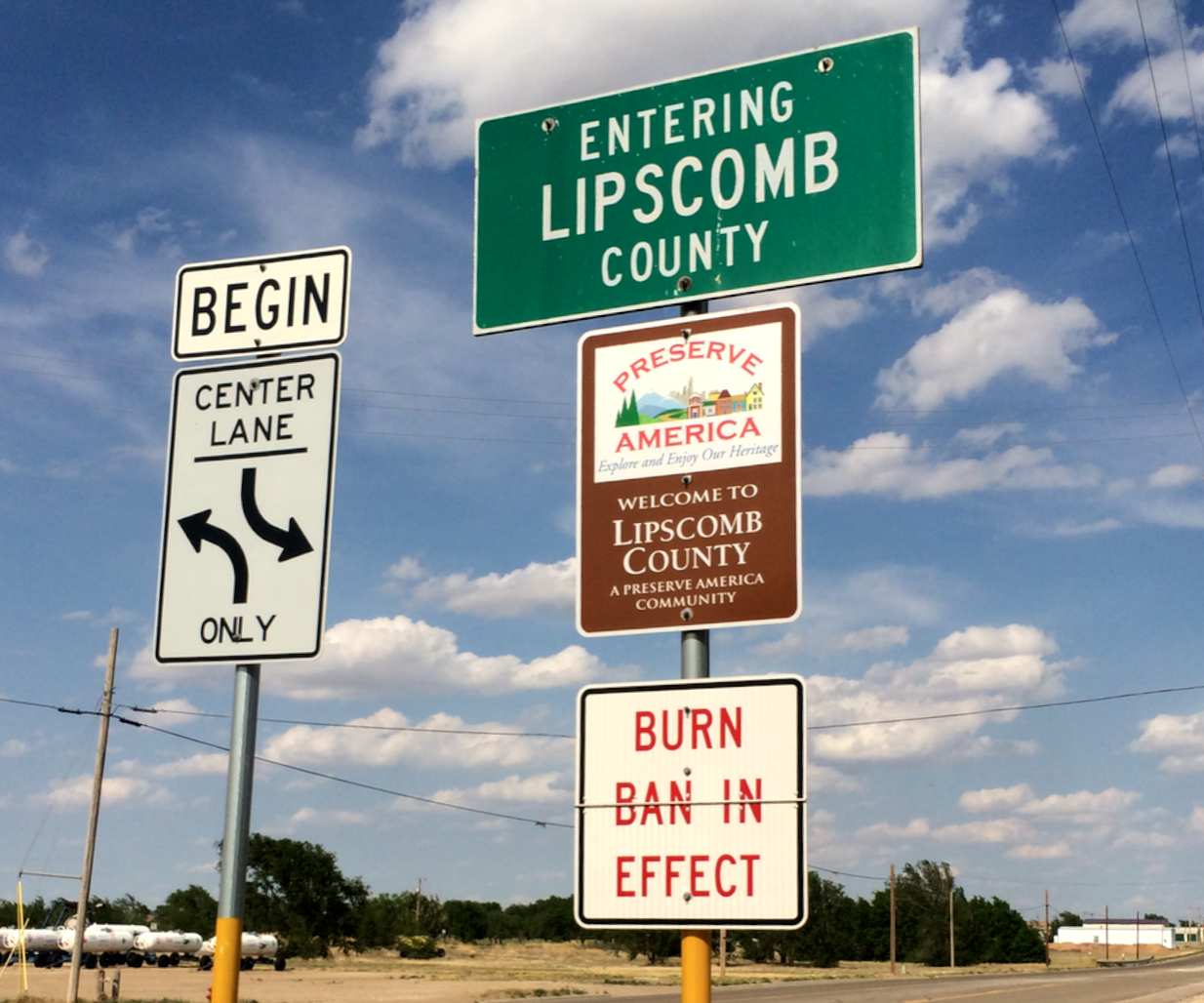 The Lipscomb area is heavily rural and sparsely populated. This is its “downtown” district. 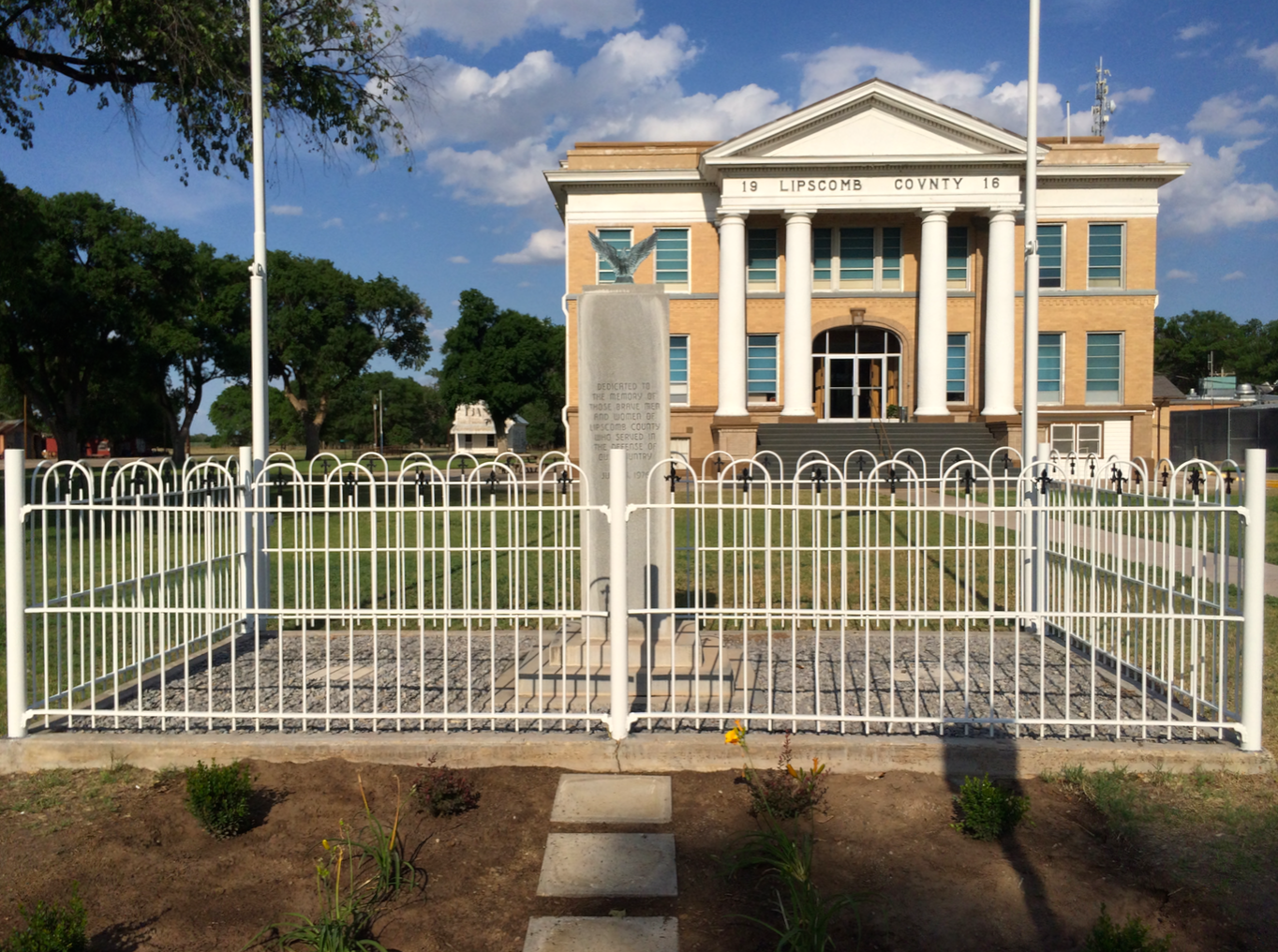 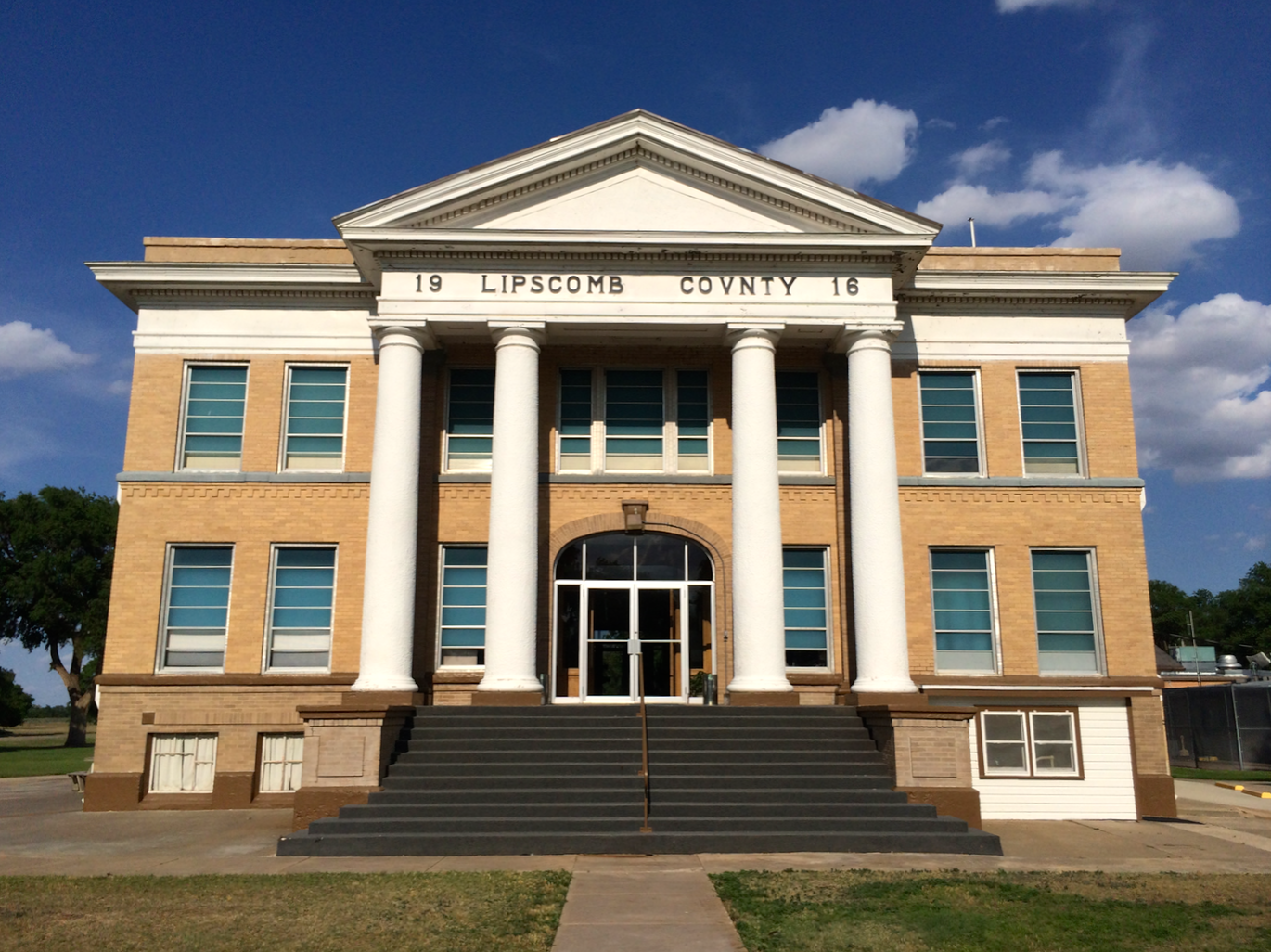 The courthouse is the tallest building in town. 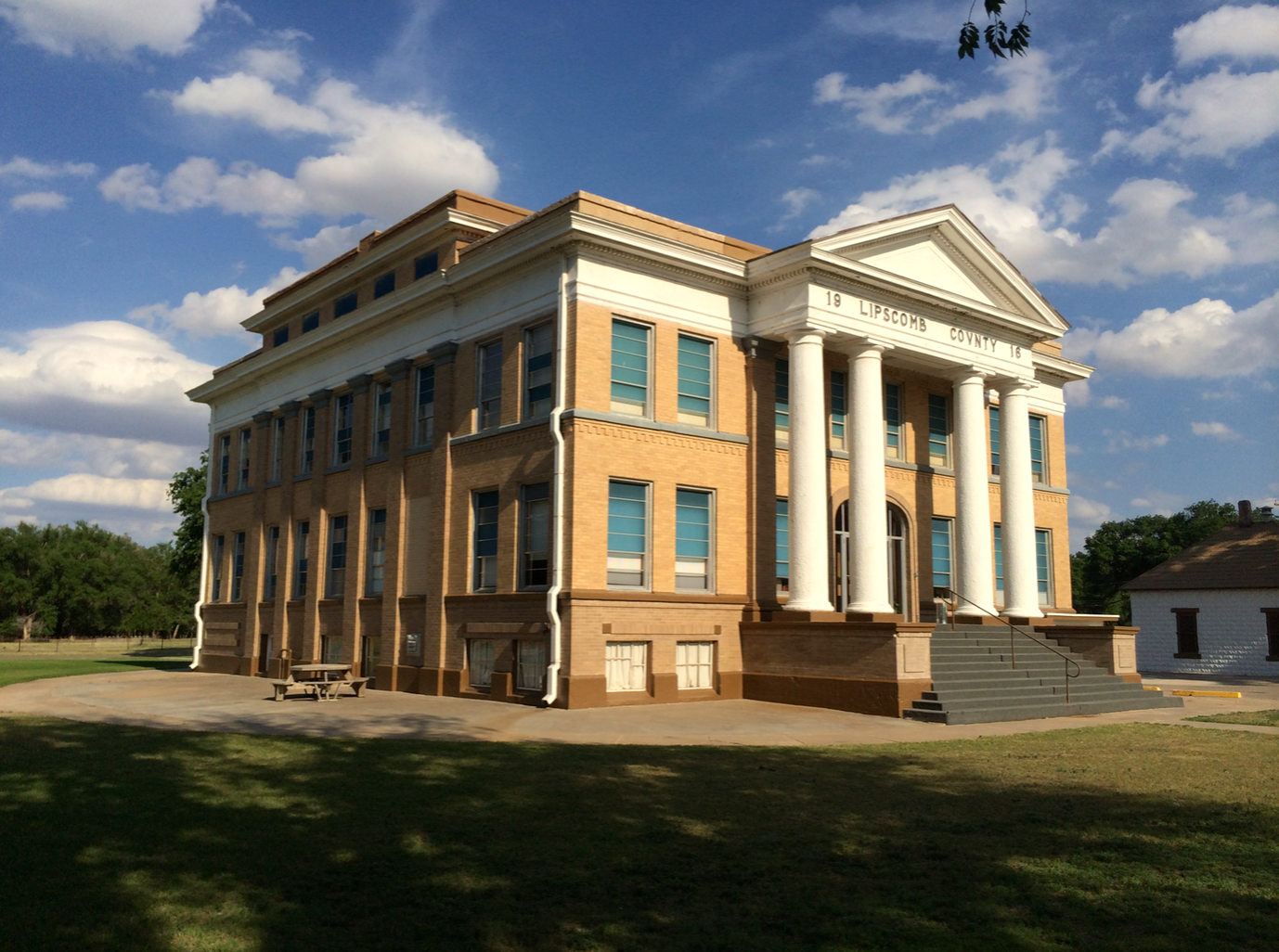 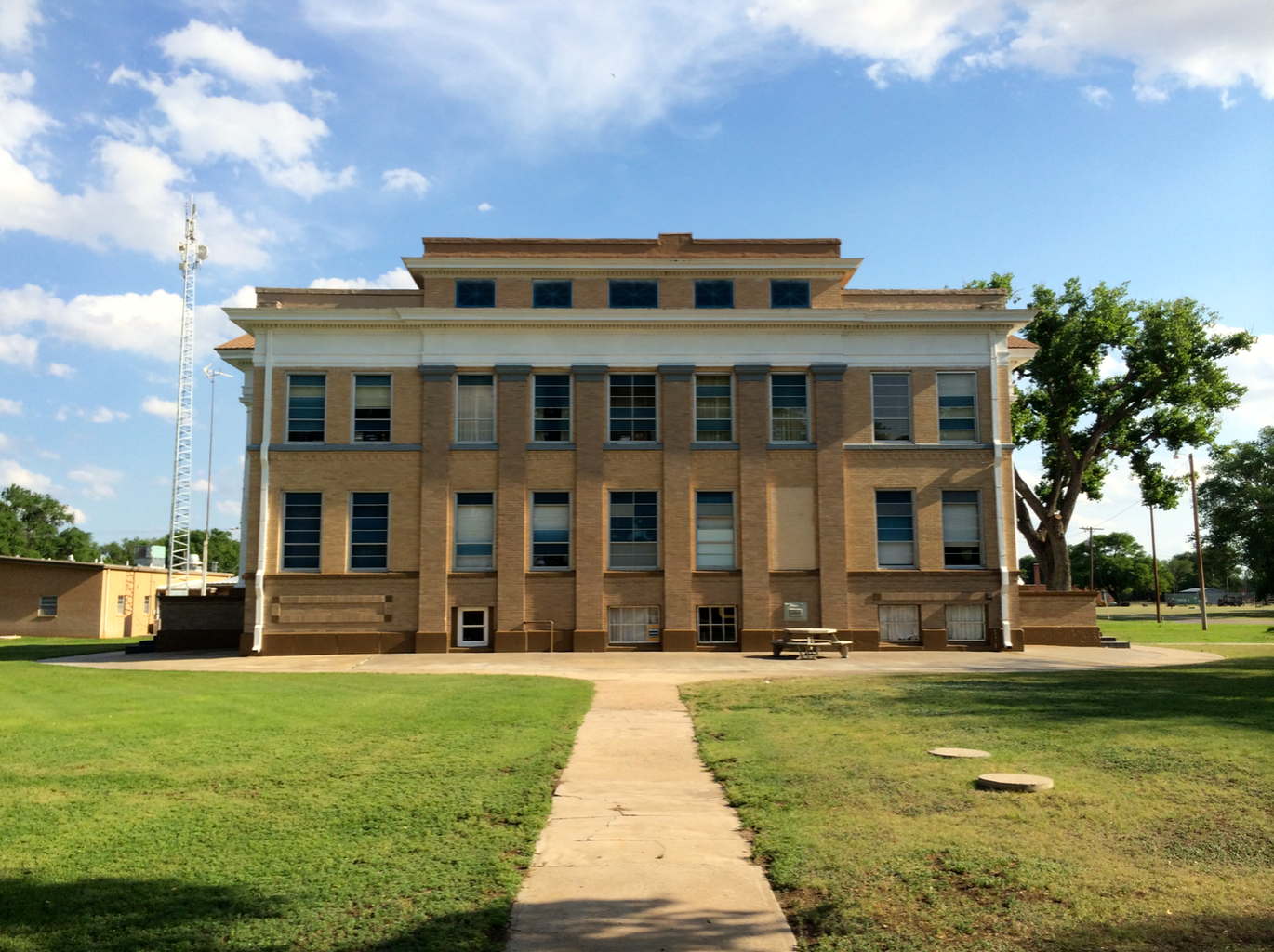 The northern façade, on Main Street 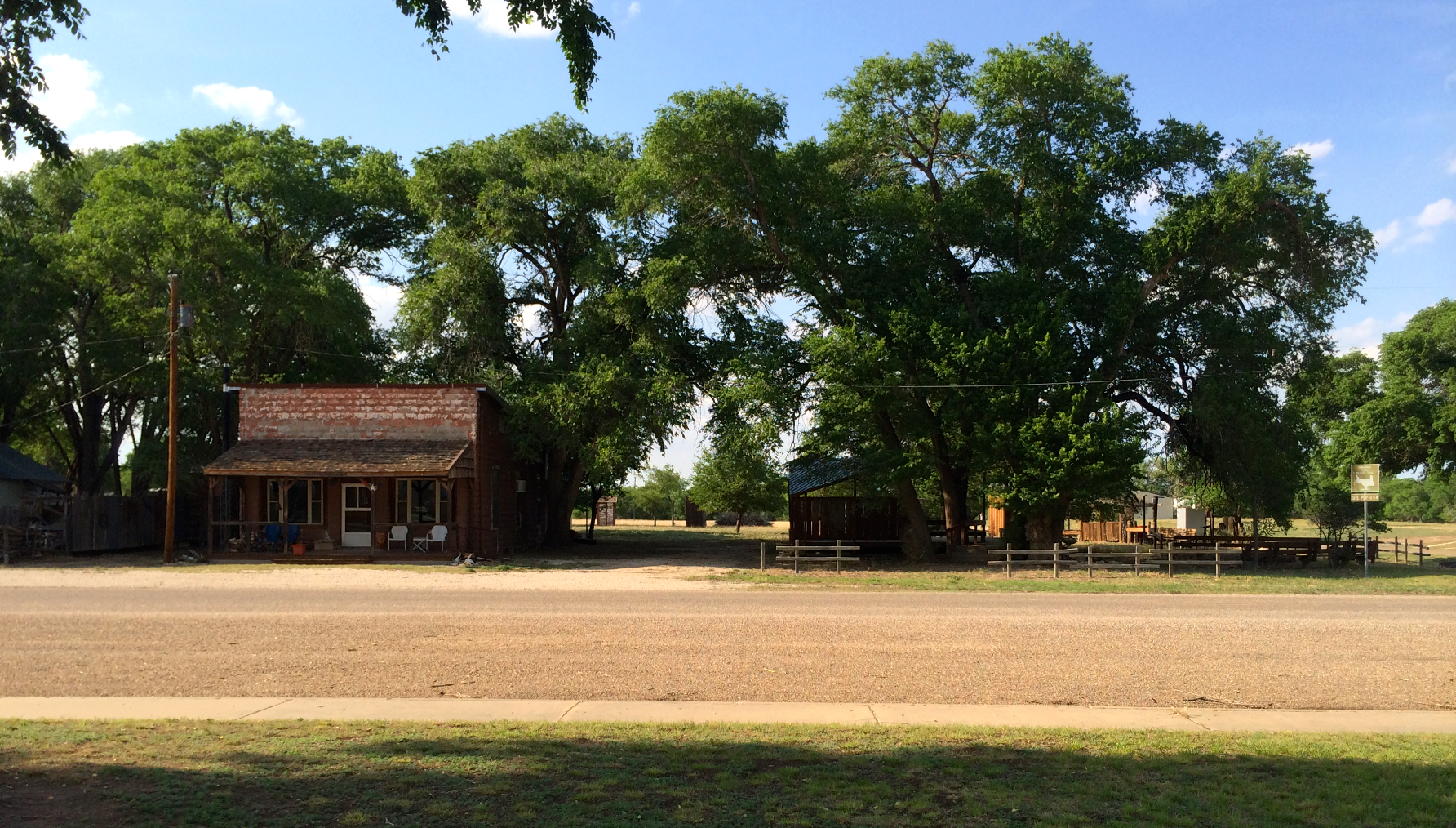 I fail to recall a more rural courthouse setting. This is the view of Main Street from the western side of the building. 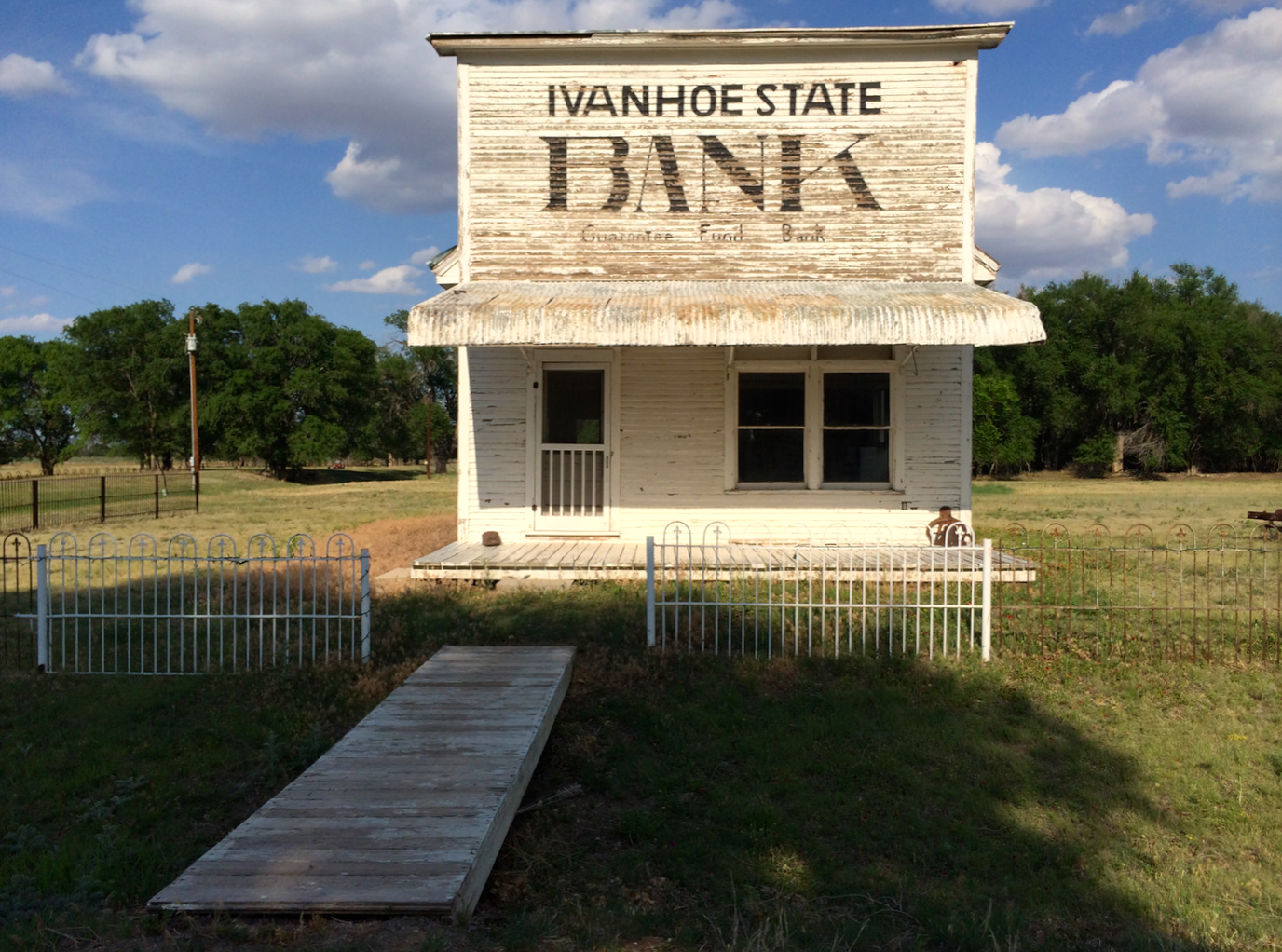 The old (and possibly historic) Ivanhoe State Bank is across 4th Avenue from the courthouse lawn’s eastern side.

This part of Lipscomb looks like it never left the Wild West of the 1800s. 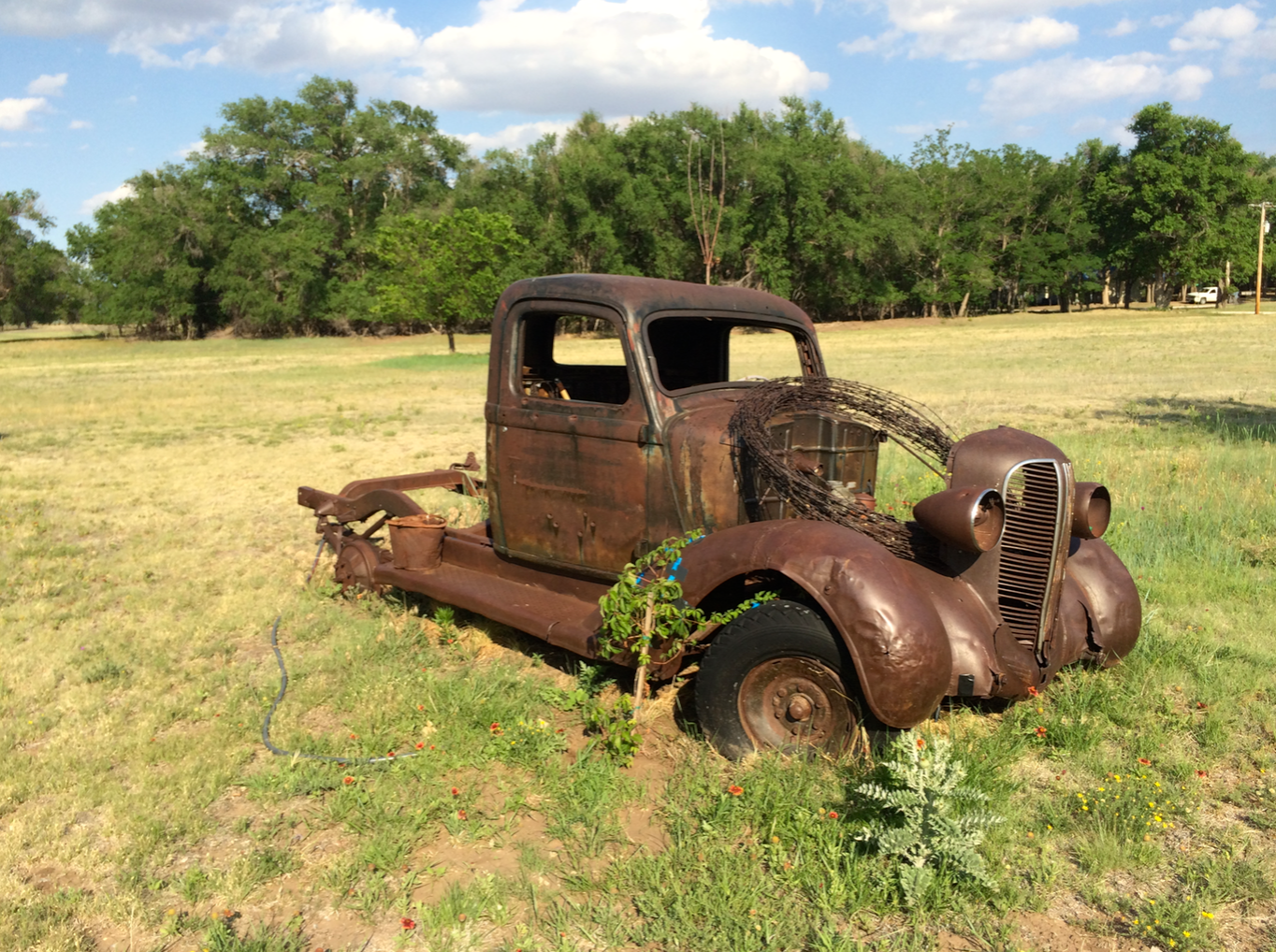 Next to the bank is this curiosity.

The courthouse, as scene from the bank’s porch 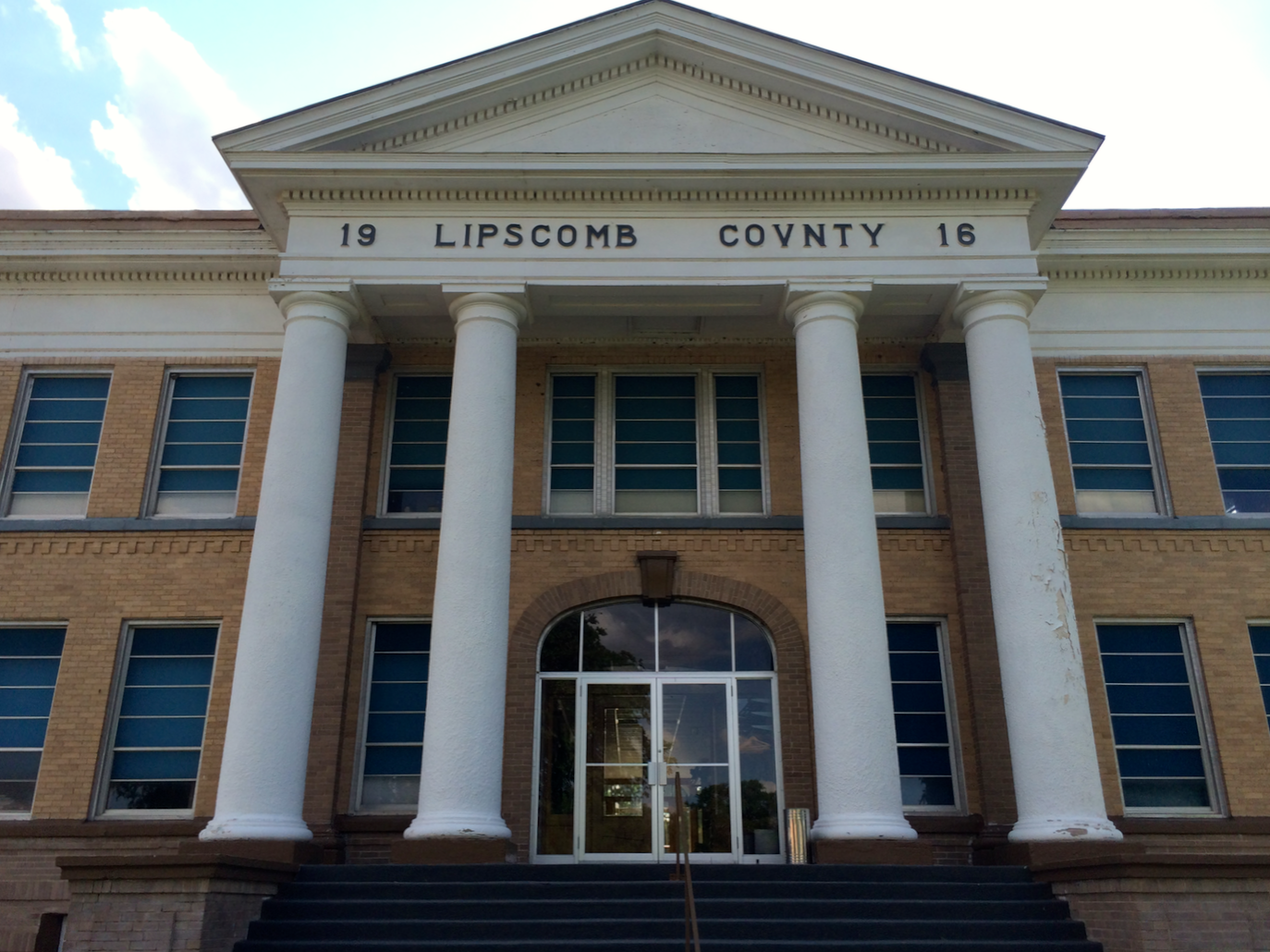 The eastern façade, on 4th Avenue 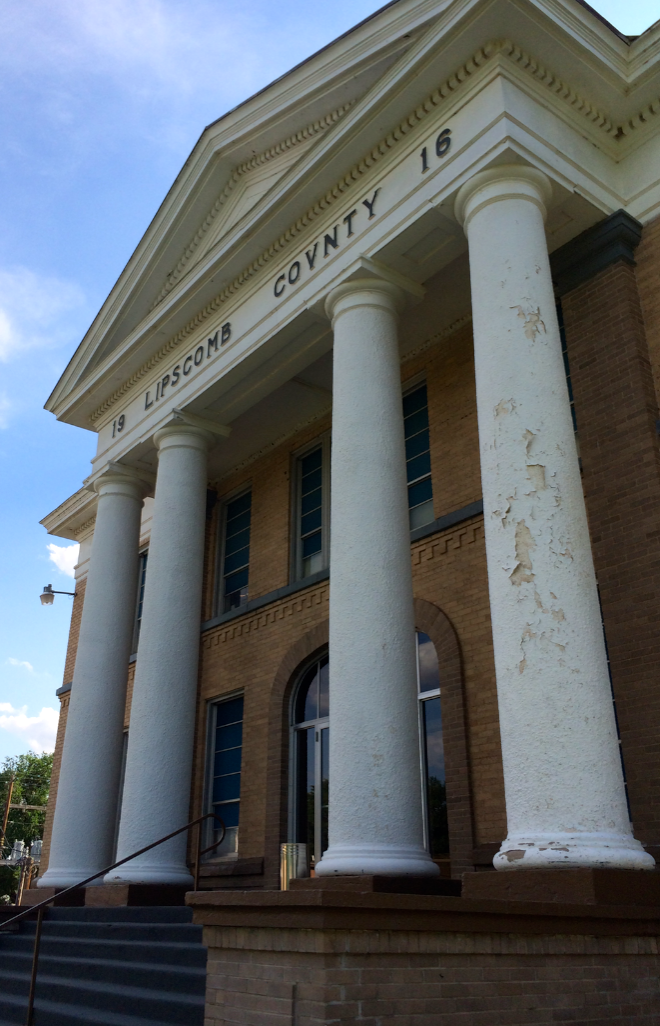 There is serious wear-and-tear on some of the courthouse’s columns.

Nowhere else in Texas will you find such a view of an open field from the courthouse doors. 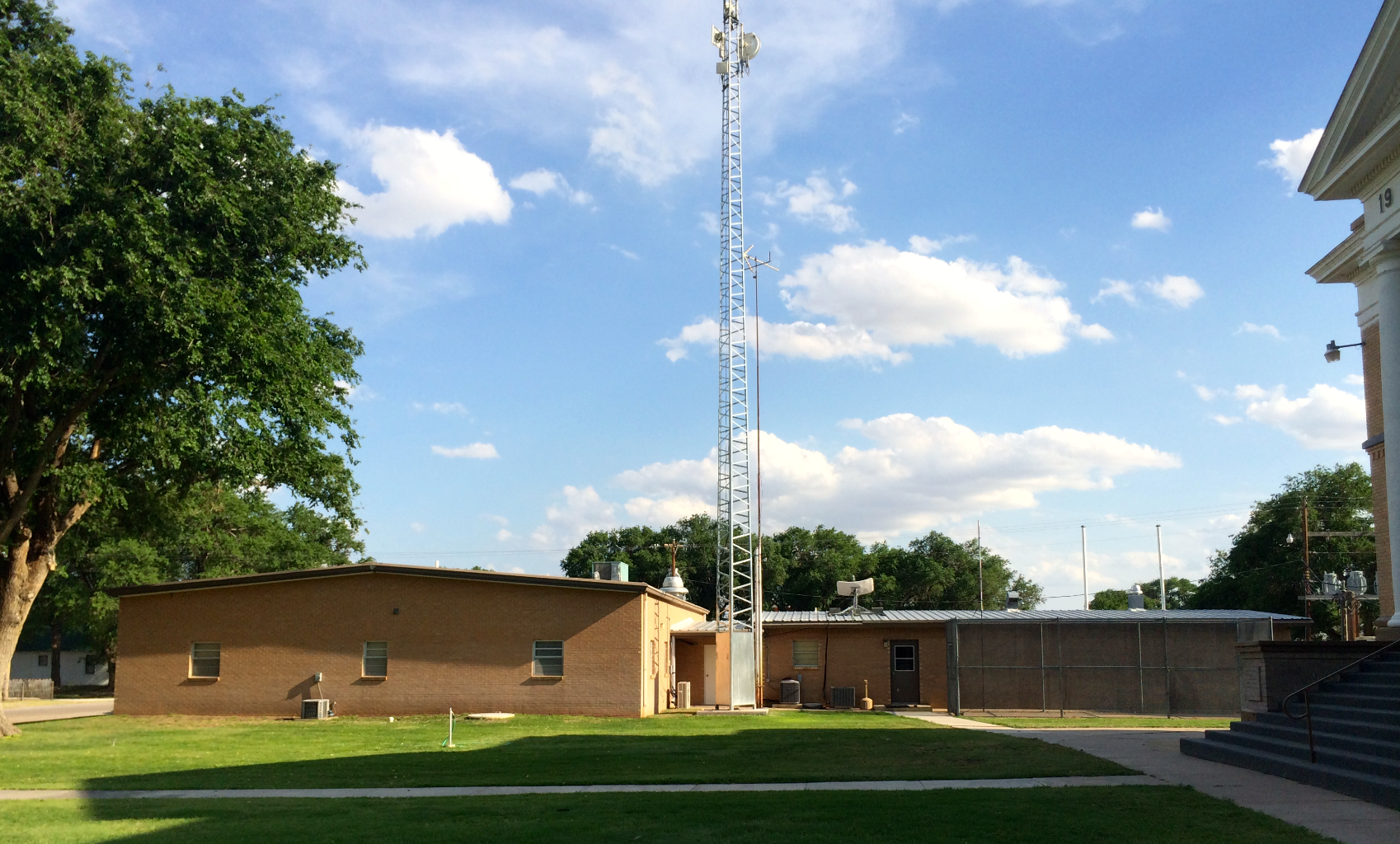 The Lipscomb County Sheriff’s Office is near the eastern steps.

The courthouse and sheriff’s office complex 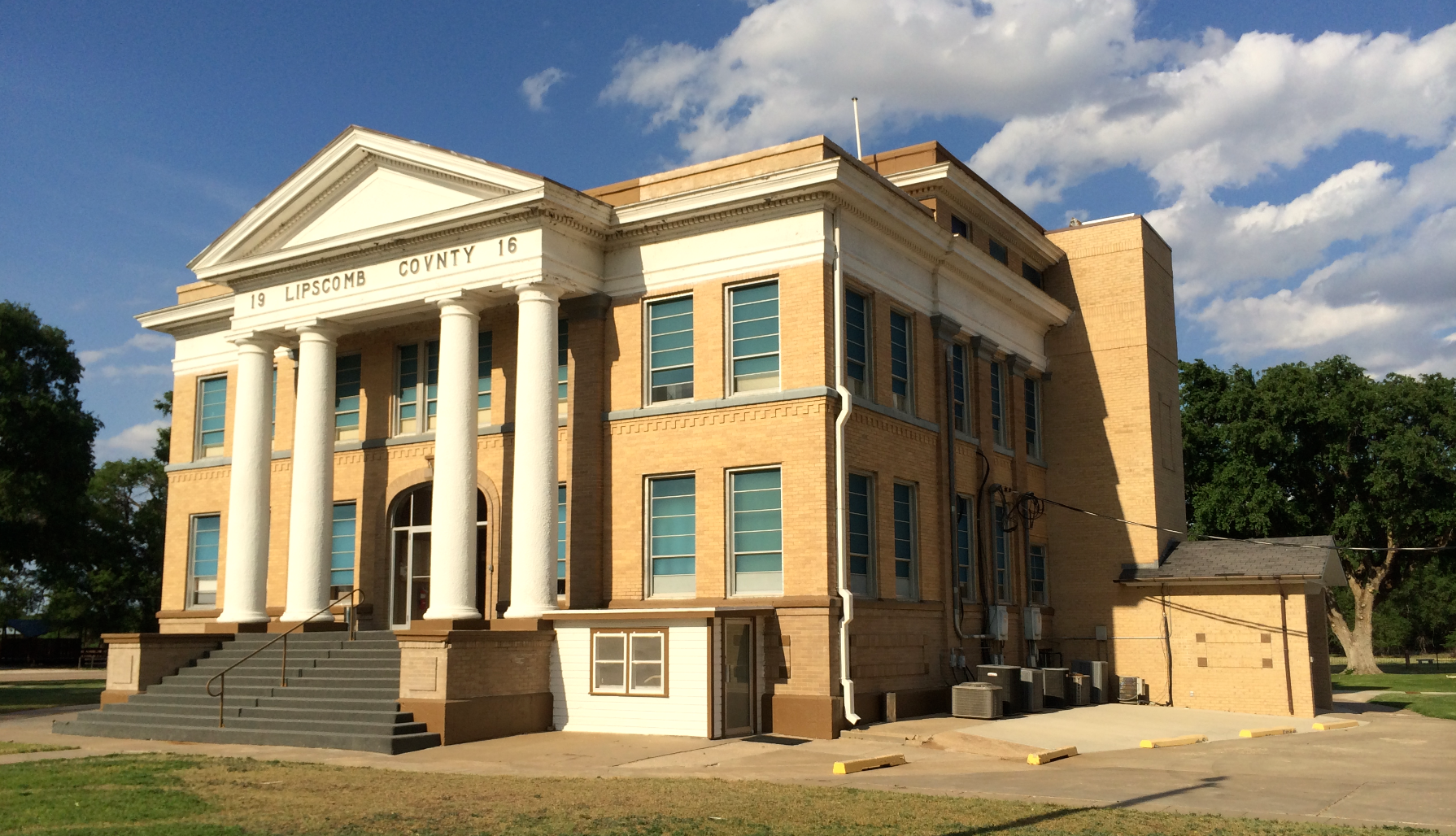 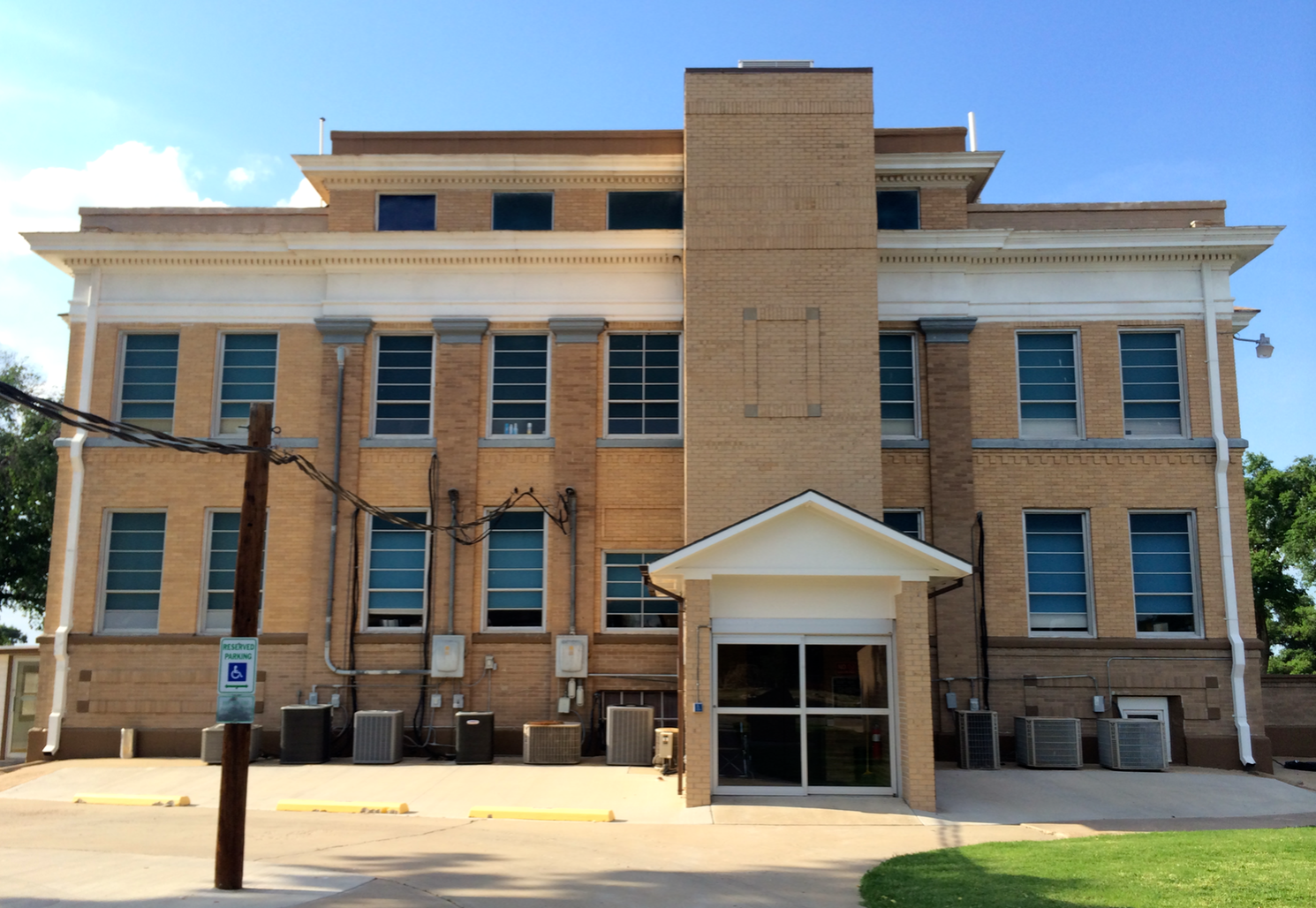 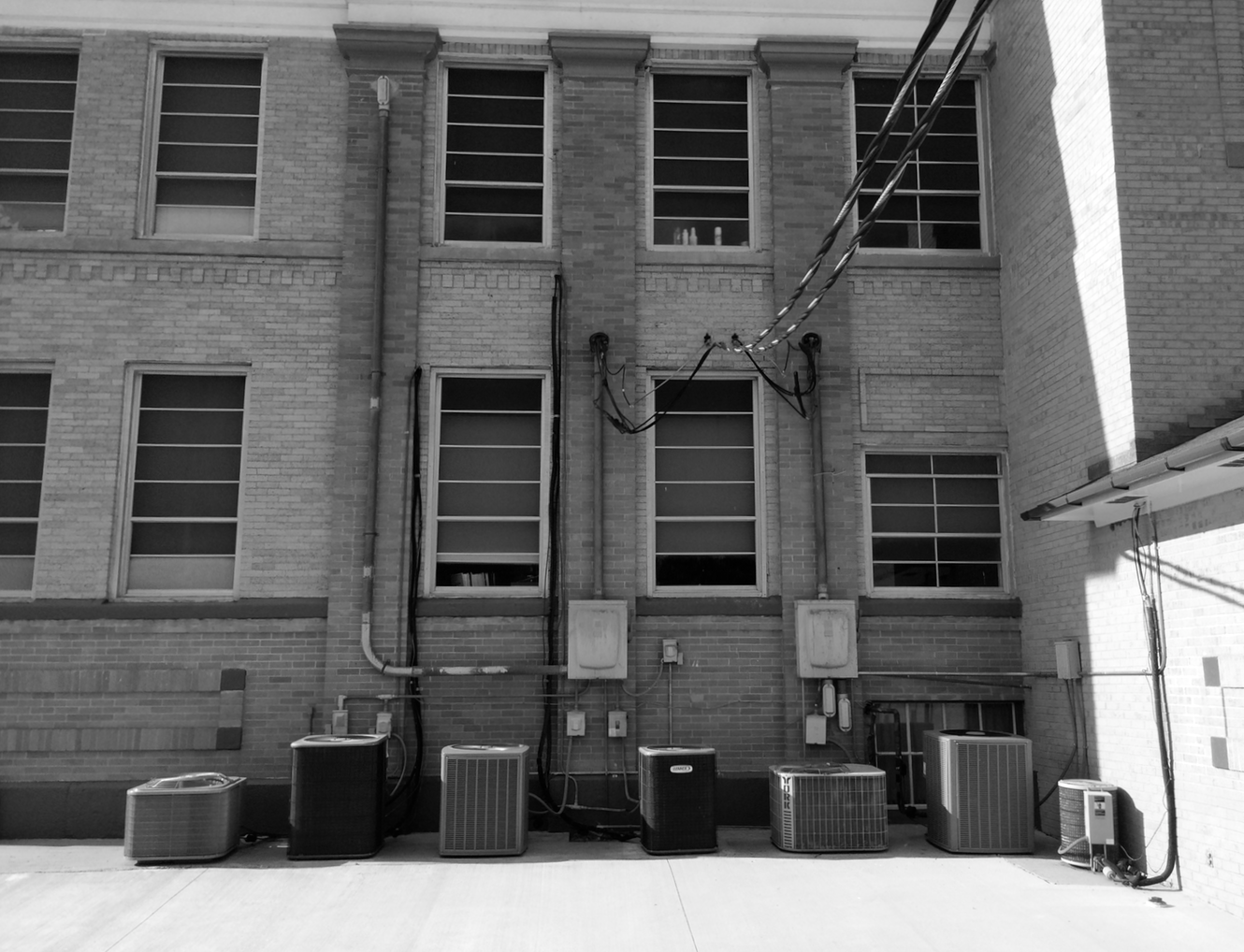 A large collection of air conditioners and other utility wires graces the southern side as well. 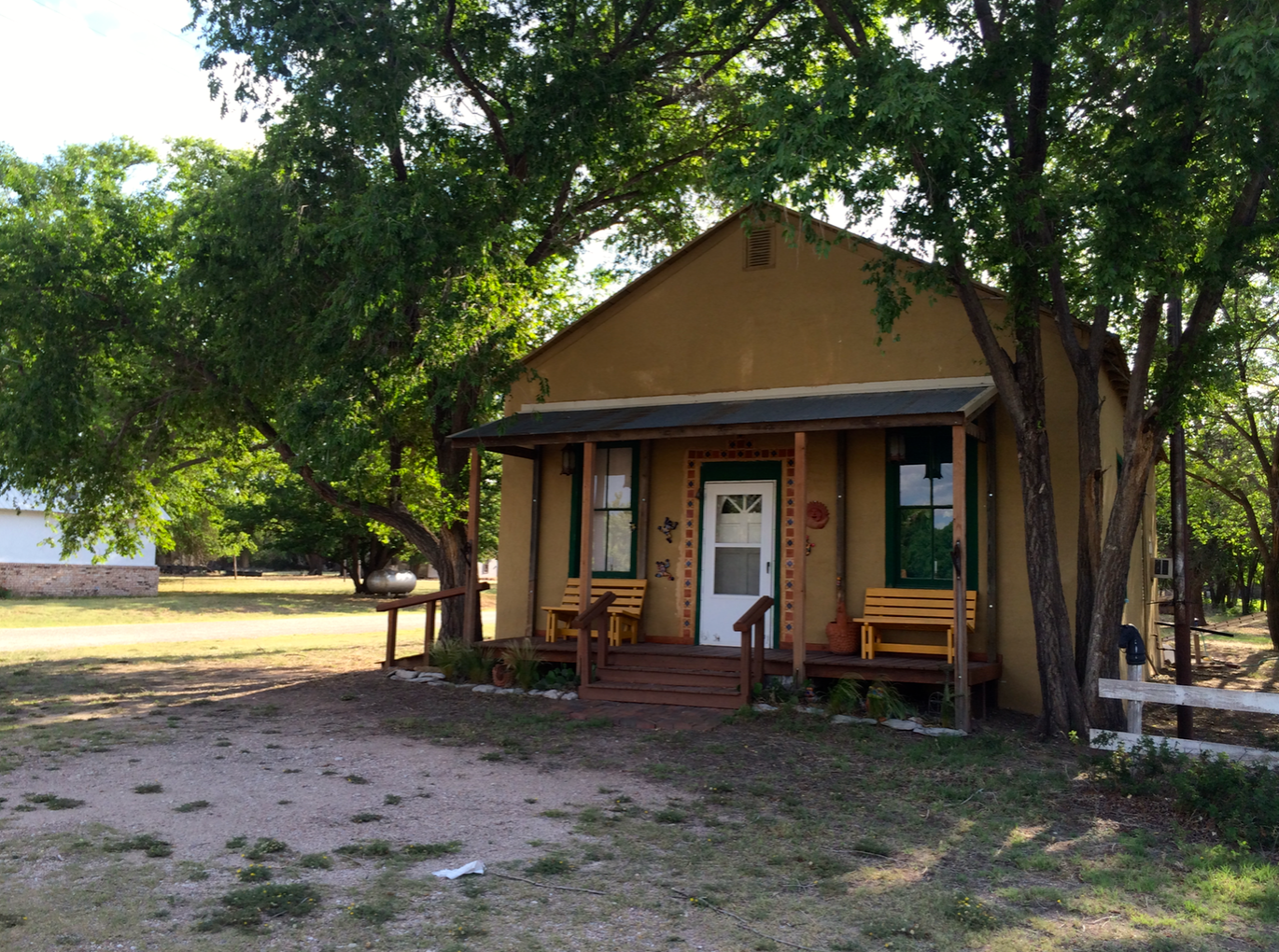 The “Old Lipscomb Hotel” is now a frame shop and studio (the only business left on the courthouse square). 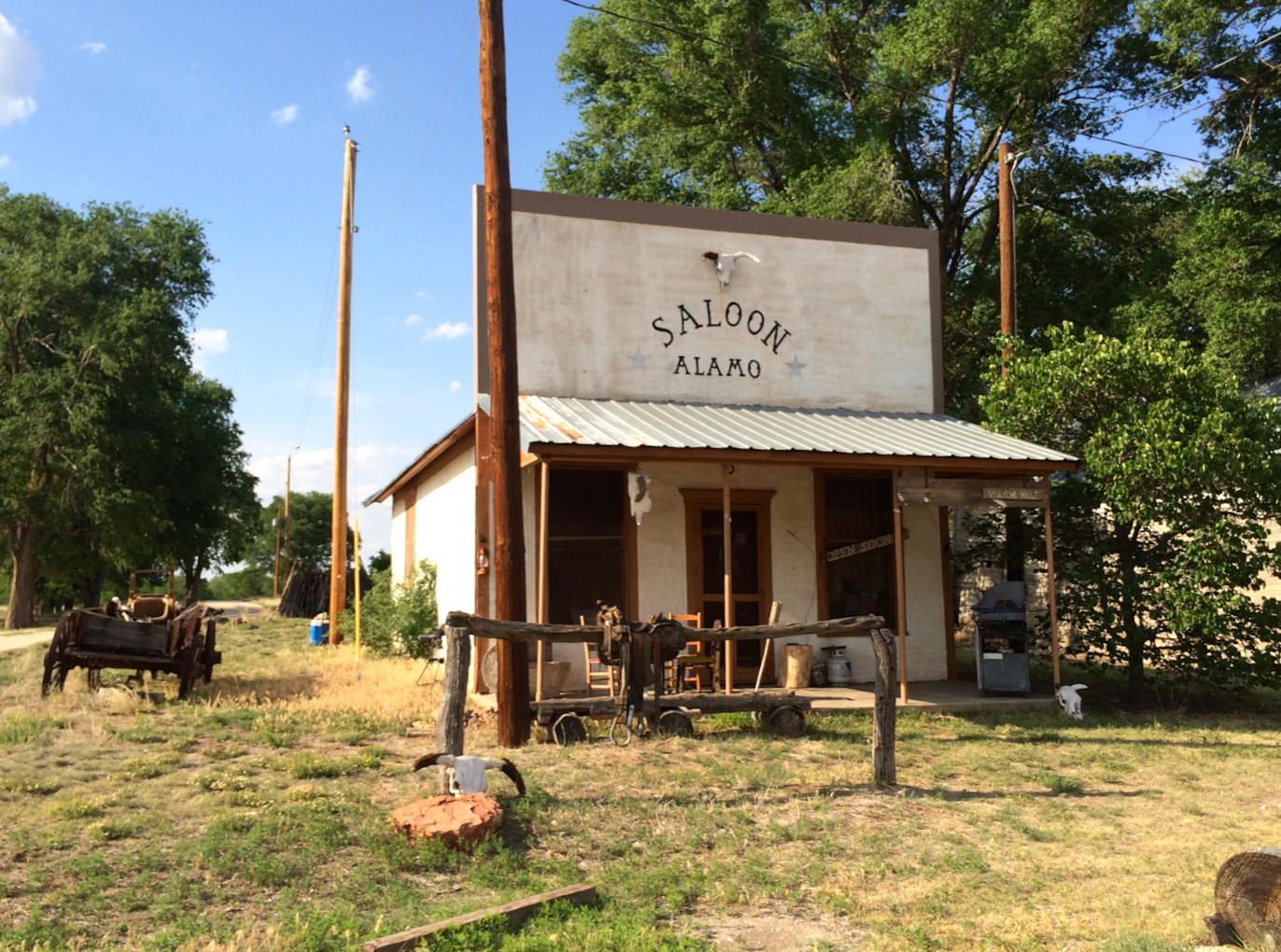 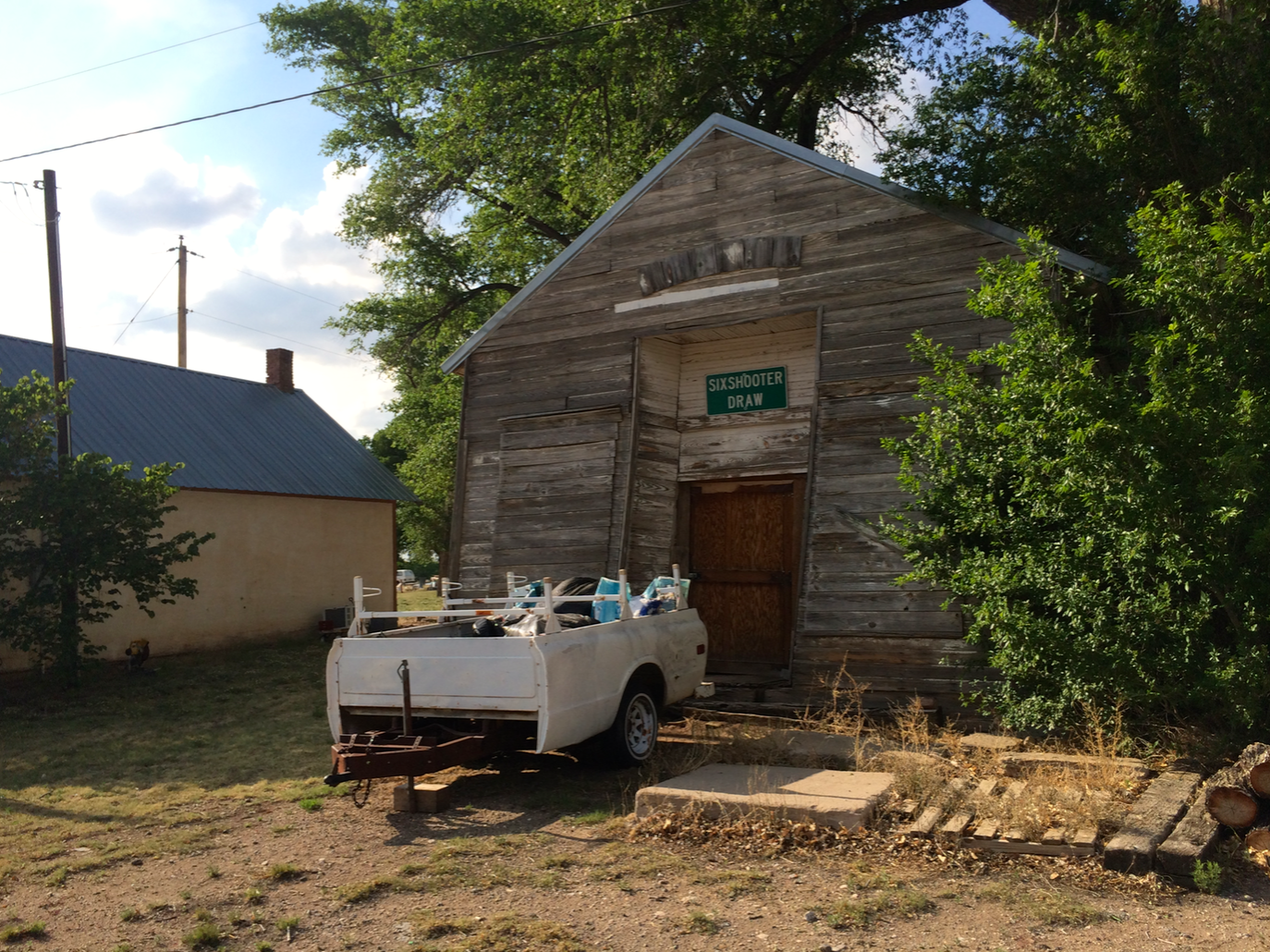 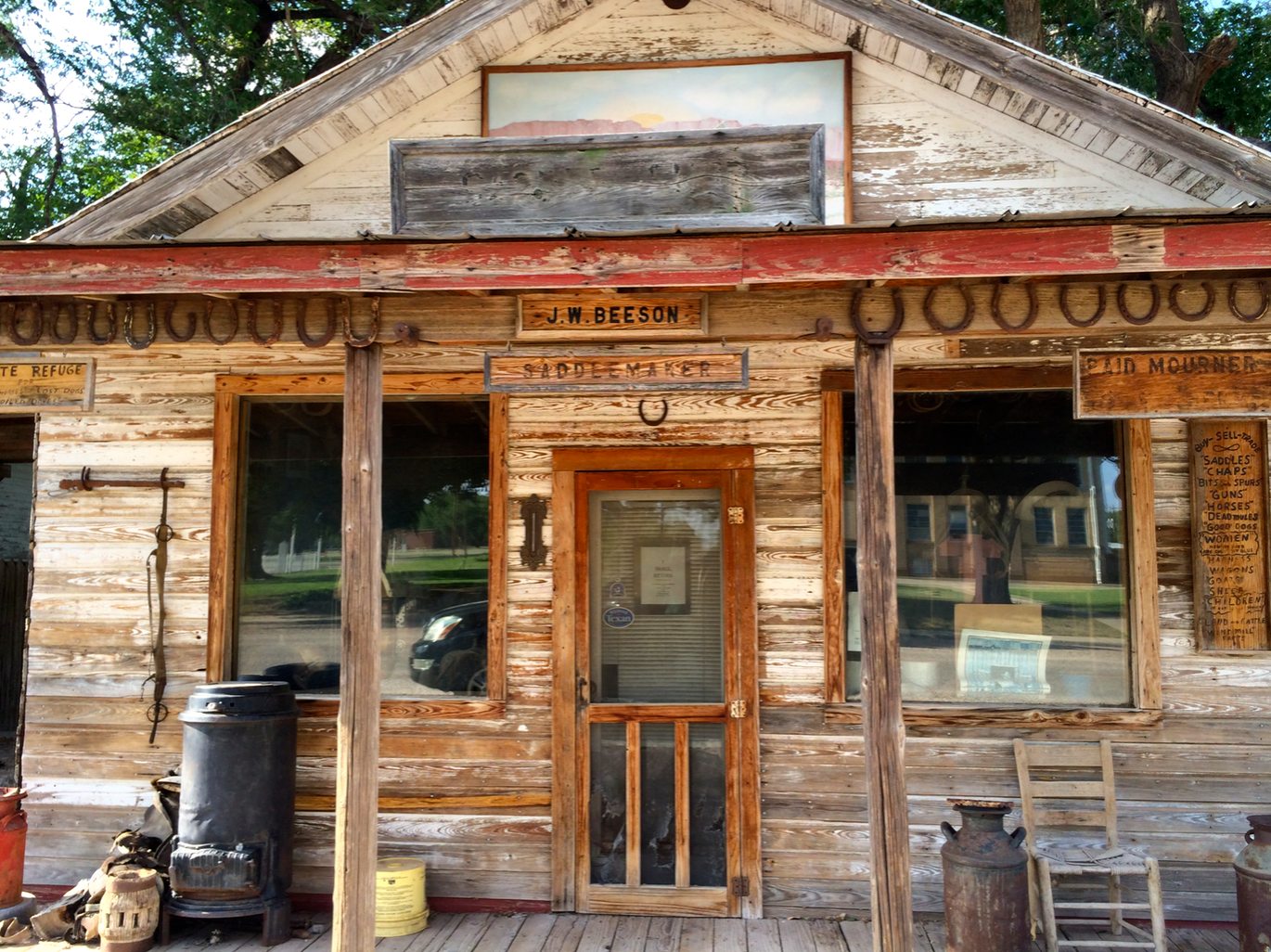 A series of other picturesque buildings lines Main Street to the north of the courthouse. 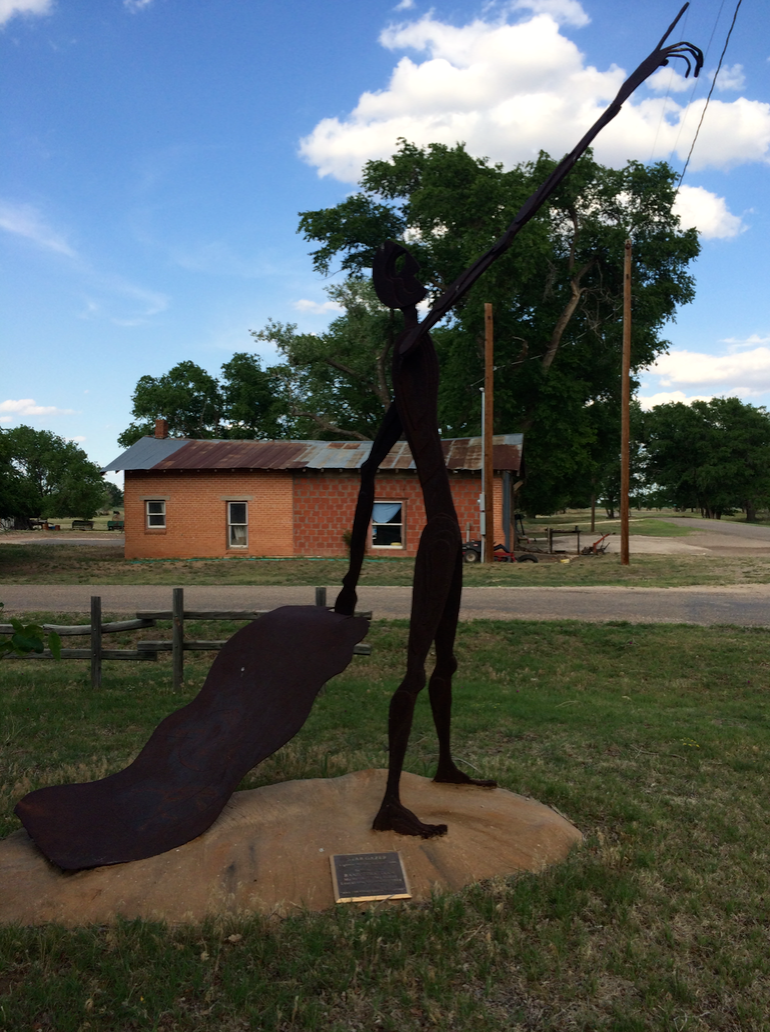 Across from the northeast corner of the lawn is an art sculpture entitled “The Stargazer”. 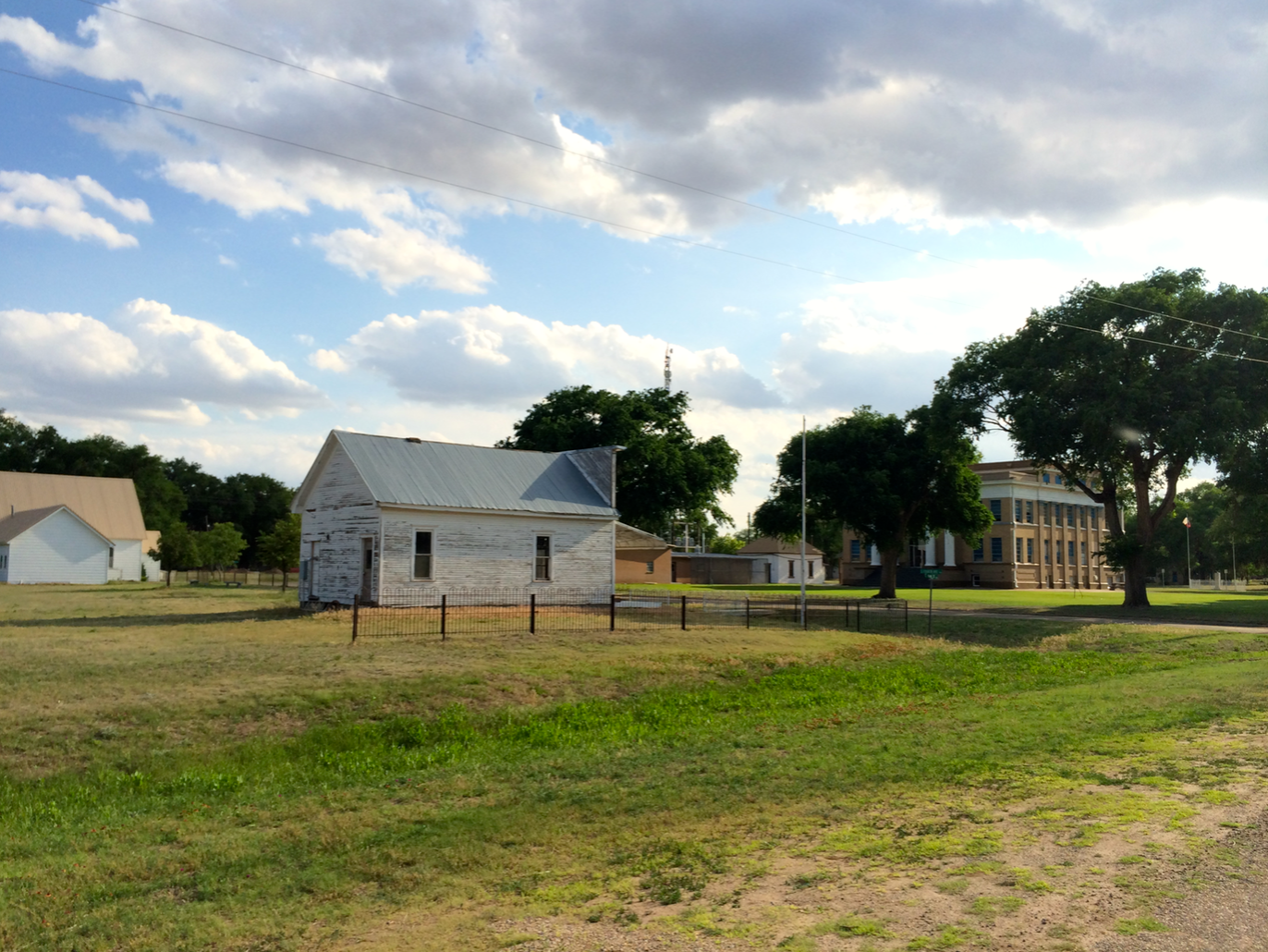 The courthouse and Ivanhoe State Bank, as seen from Main Street 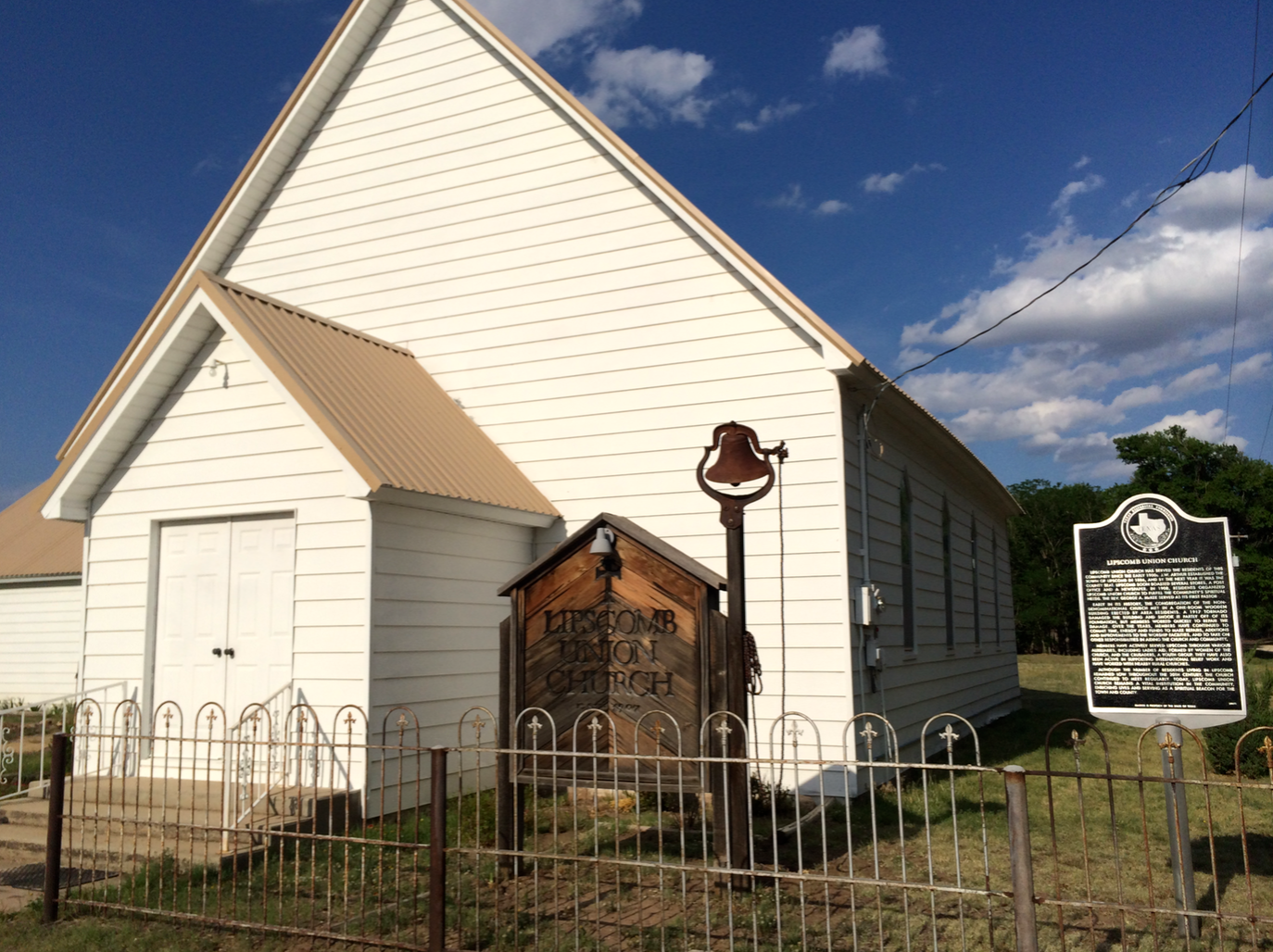