“Prehistoric cultures occupied this region, then the Plains Apaches appeared. The historic-era Apaches arrived, then were pushed out of the region in the early eighteenth century by the Comanche Indians, who dominated the Texas Panhandle until the 1870s. The Red River War of 1874–75 led to the removal of the nomadic Indians to Indian Territory, which in turn led to the arrival of the ranching era.” 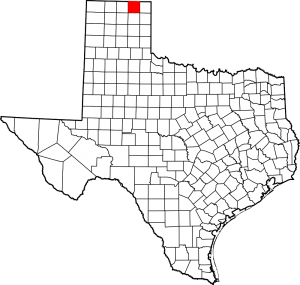 “The availability of land in Ochiltree County coincided with the proximity of a new railroad. In 1887 the Southern Kansas Railway Company of Texas, a Santa Fe subsidiary, built a line from Kansas through Oklahoma into the Panhandle via Canadian and Panhandle. This line passed through Lipscomb County, thirty to forty miles east of Ochiltree. Thus the county was only one or two days’ travel from the railroad. Proximity to the railroad brought an influx of settlers into the county, especially after 1900, and the ranching economy evolved into a stock-farming system.”

“Between 1900 and 1910, however, stock farming began to give way to wheat farming. As local stock farmers determined that wheat was a viable crop and new settlers moved into the area, the local economy shifted. By 1910 there were 264 farms and ranches in the area, encompassing almost 226,000 acres, including more than 53,000 acres reported to be “improved.” That year the agricultural census reported 9,000 acres planted in wheat in the county; another 2,075 acres were planted in corn, and 7,400 acres were devoted to sorghum.”

“The urban development of Ochiltree County reflects its evolution from a ranching to a mixed economy. The sparse ranching population of the 1880s and 1890s revolved around the village of Ochiltree, in the central part of the county fifteen miles south of the site of present Perryton. Ochiltree, founded in 1885, became the county seat in 1889, when the local residents decided to organize the county. By 1915 the town had a population of 500, a courthouse, a jail, a school, a bank, and two churches.”

“The construction of the North Texas and Santa Fe Railway, a Santa Fe subsidiary, from Shattuck, Oklahoma, to Spearman, Texas, in 1919 altered the county permanently. The rail line, which ran across the Texas Panhandle, tapped the newly emerging wheat market. The post-World War I demand, coupled with access to rail transportation, made wheat farming profitable. Another influx of farmers between 1920 and 1930 took advantage of these circumstances.”

“As the population and economy grew, other changes occurred. Ochiltree, fifteen miles south of the railroad, found itself at a distinct disadvantage when a new town, Perryton, was laid out on the railroad in 1919; Perryton was immediately made the county seat. During the next year the entire town of Ochiltree was moved to Perryton, and by 1920 Ochiltree had disappeared completely. The new railroad also changed the location of Wawaka, which had been established in the west central part of the county by German immigrants in 1885. In 1919 and 1920 this tiny community moved three miles north to the railroad and shortened its name to Waka.”

“Ochiltree County suffered from the effects of the Great Depression and the Dust Bowl of the 1930s. By 1940 there were only 528 farms in the county, and the number of acres devoted to wheat had declined substantially; only 67,000 acres were planted in wheat that year. The population dropped from 5,224 in 1930 to 4,213 in 1940. The economy recovered during the 1940s, and the discovery of oil and gas in the southern part of the county in 1951 led to increased growth.”

“In 2002 the county had 367 farms and ranches covering 559,479 acres, 63 percent of which were devoted to crops and 36 percent to pasture. In that year farmers and ranchers in the area earned $241,852,000, and the county ranked first in the state for wheat acreage. Cattle, swine, corn, wheat, and grain sorghum were the area’s other chief agricultural products. Feedlot operations, agribusinesses, and oilfield services also added to the local economy.”

From several different sources during my trip to the county, I learned that Ochiltree is pronounced “ock-ill-tree” rather than “oh-chill-tree” as I had previously thought. It’s good to know. 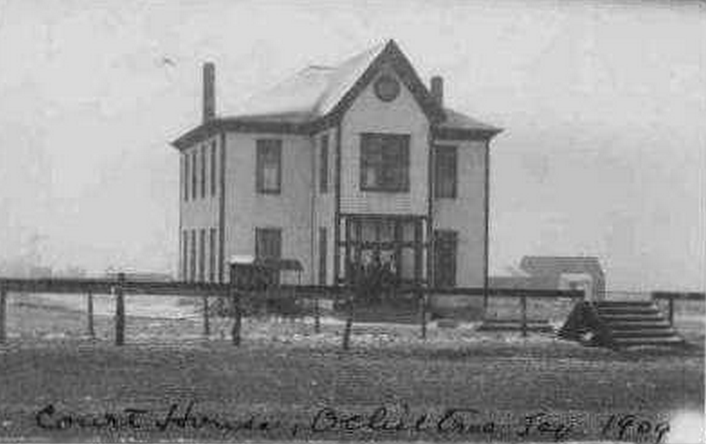 The architect and contractor of this courthouse are unknown, but we know it cost the county $9100 to build. Part of that cost was for the lumber that had to be freighted in from Dodge City, Kansas. The two-story, wooden frame building originally stood in the first county seat, Ochiltree, but was moved to Perryton when the latter became county seat in 1919.

It was destroyed sometime before 1928, when the next courthouse came into existence. 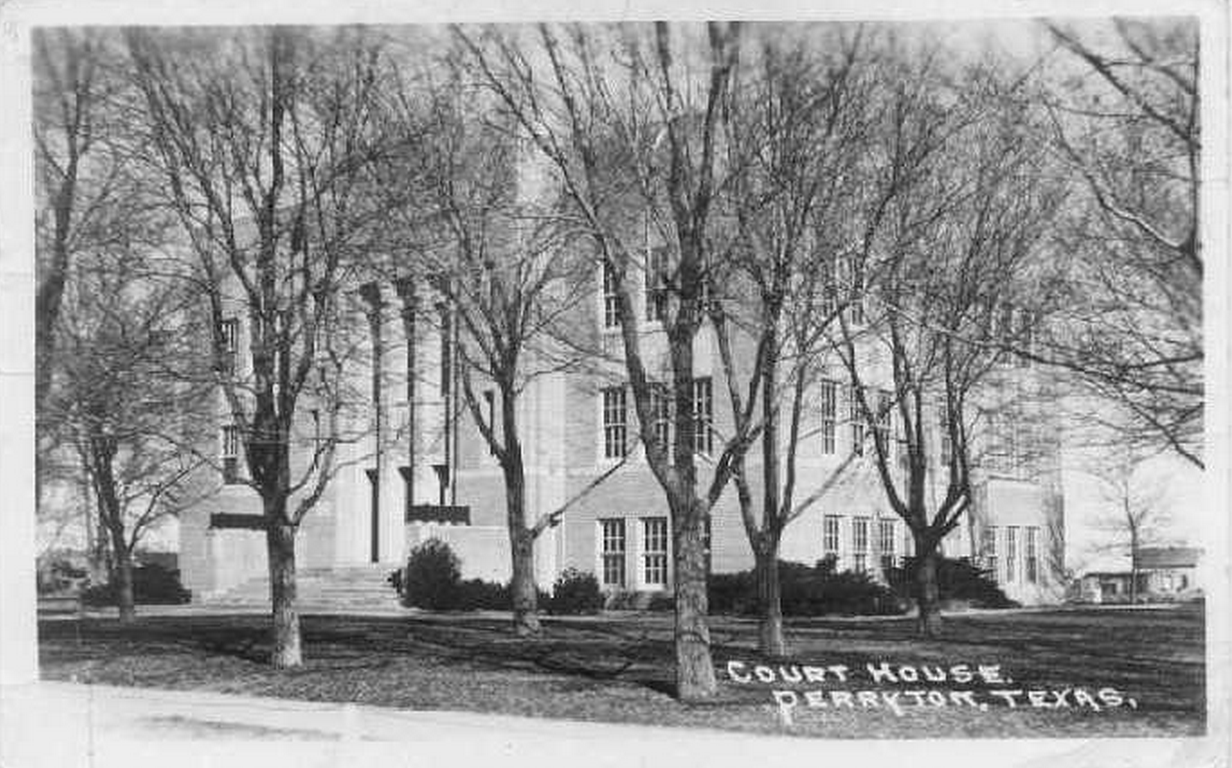 This Classical Revival courthouse, created at the height of the Art Deco era, comes to us via the designs of Mann & Co. The serving contractors were Corlett & Welchons.

Designs for a 1974 addition were provided by Terrence Doane.

Not a lot separates the ground and the sky in Ochiltree County.

Entering Perryton from the west, on Highway 15

The full of the Ochiltree County Courthouse, as seen from the southwest corner of the lawn 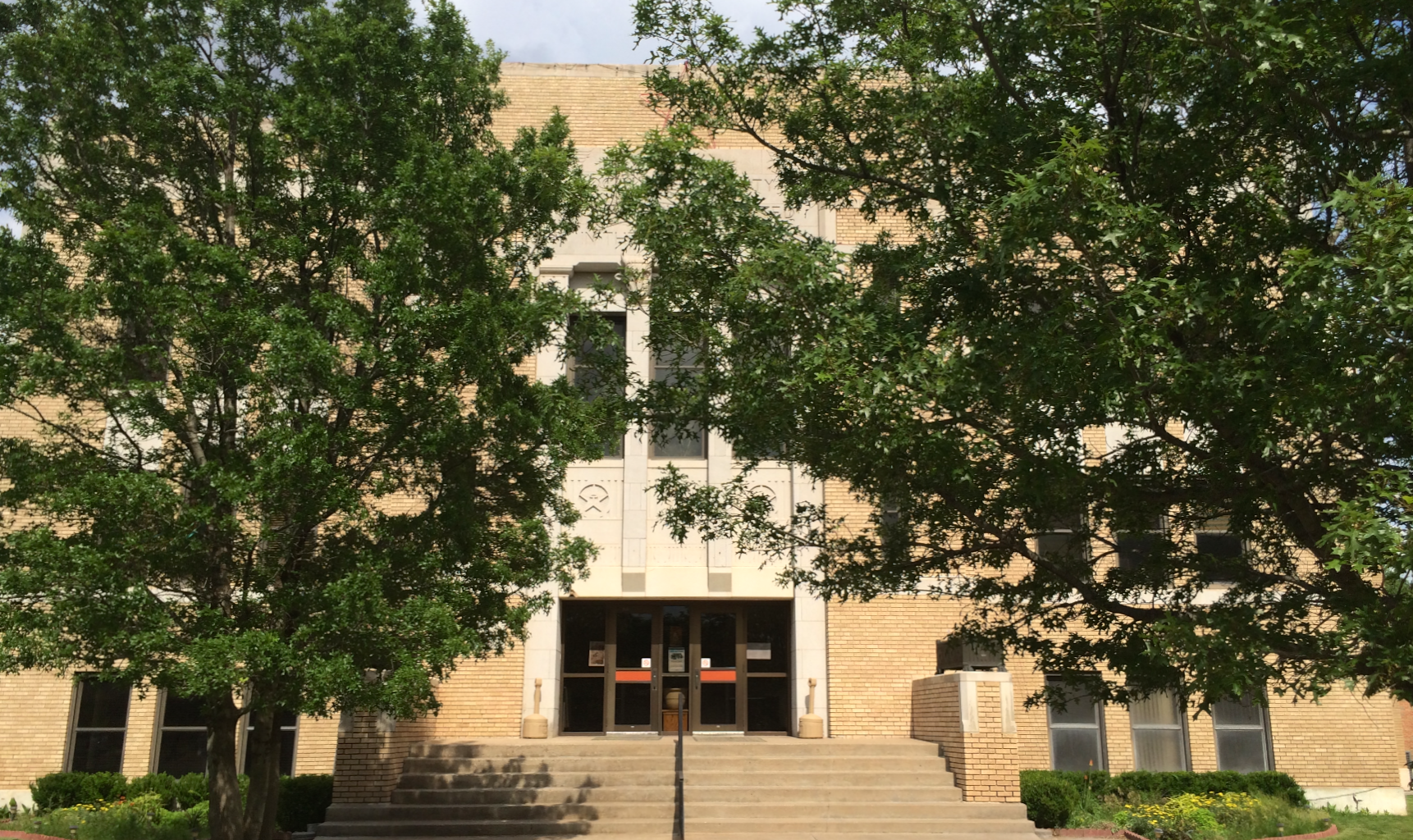 The western façade is the main one. It faces Main Street / Highway 83. 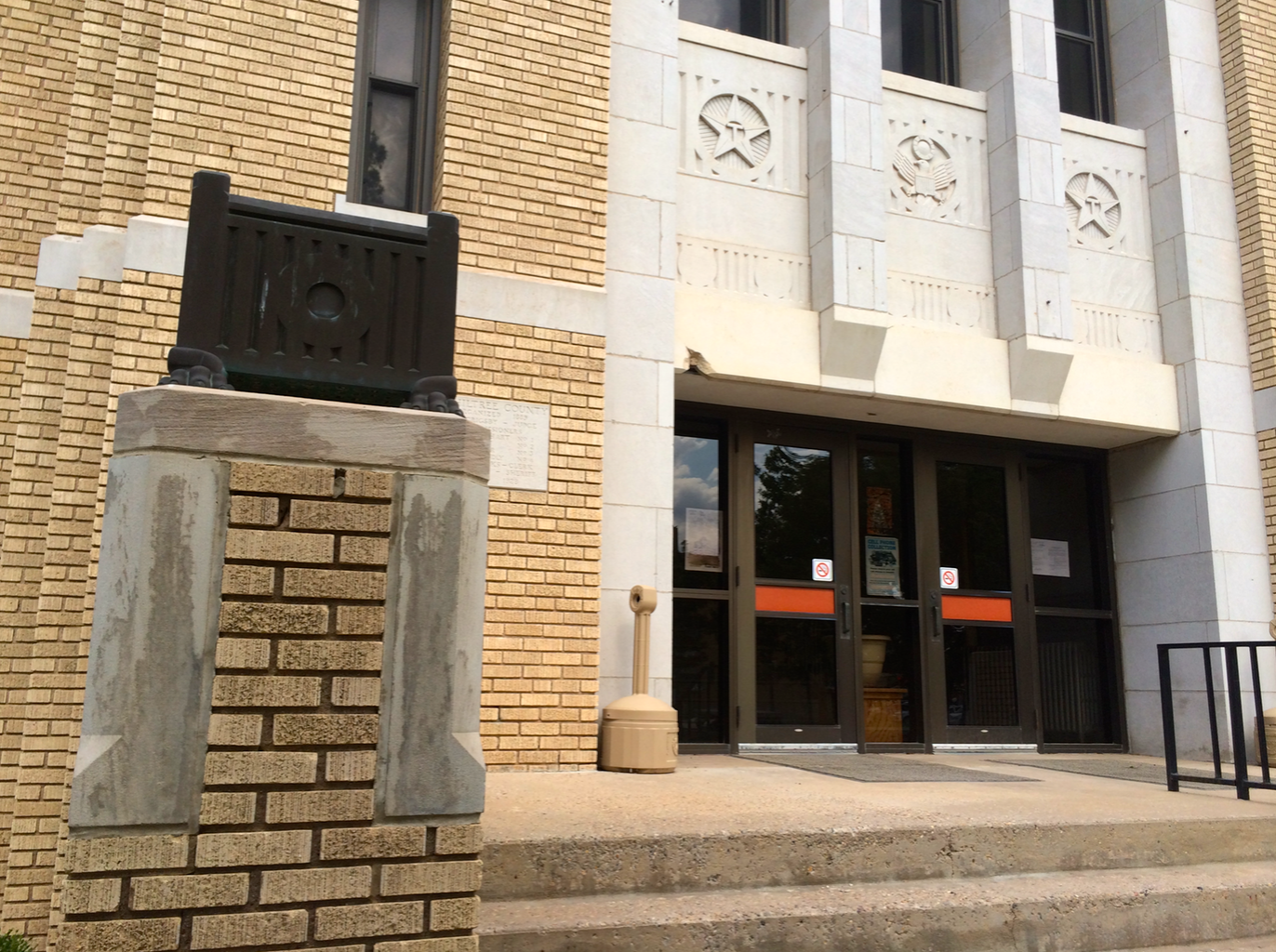 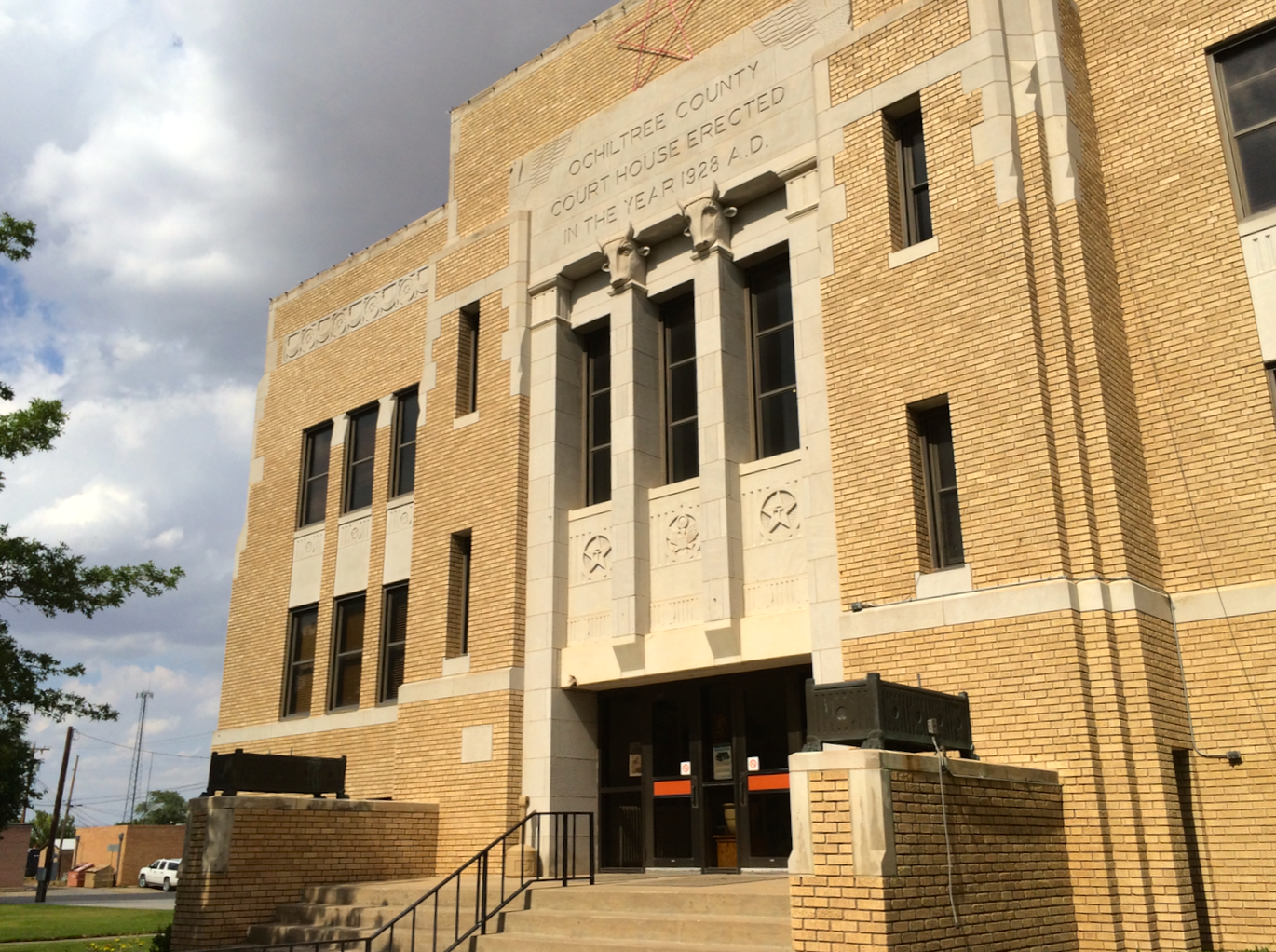 Here’s the view of Main Street from the western side. What you see here is a massive wind turbine blade passing through Perryton. It’s most likely en route to one of the area’s many wind farms.

The northern façade, with the 1974 addition on the left 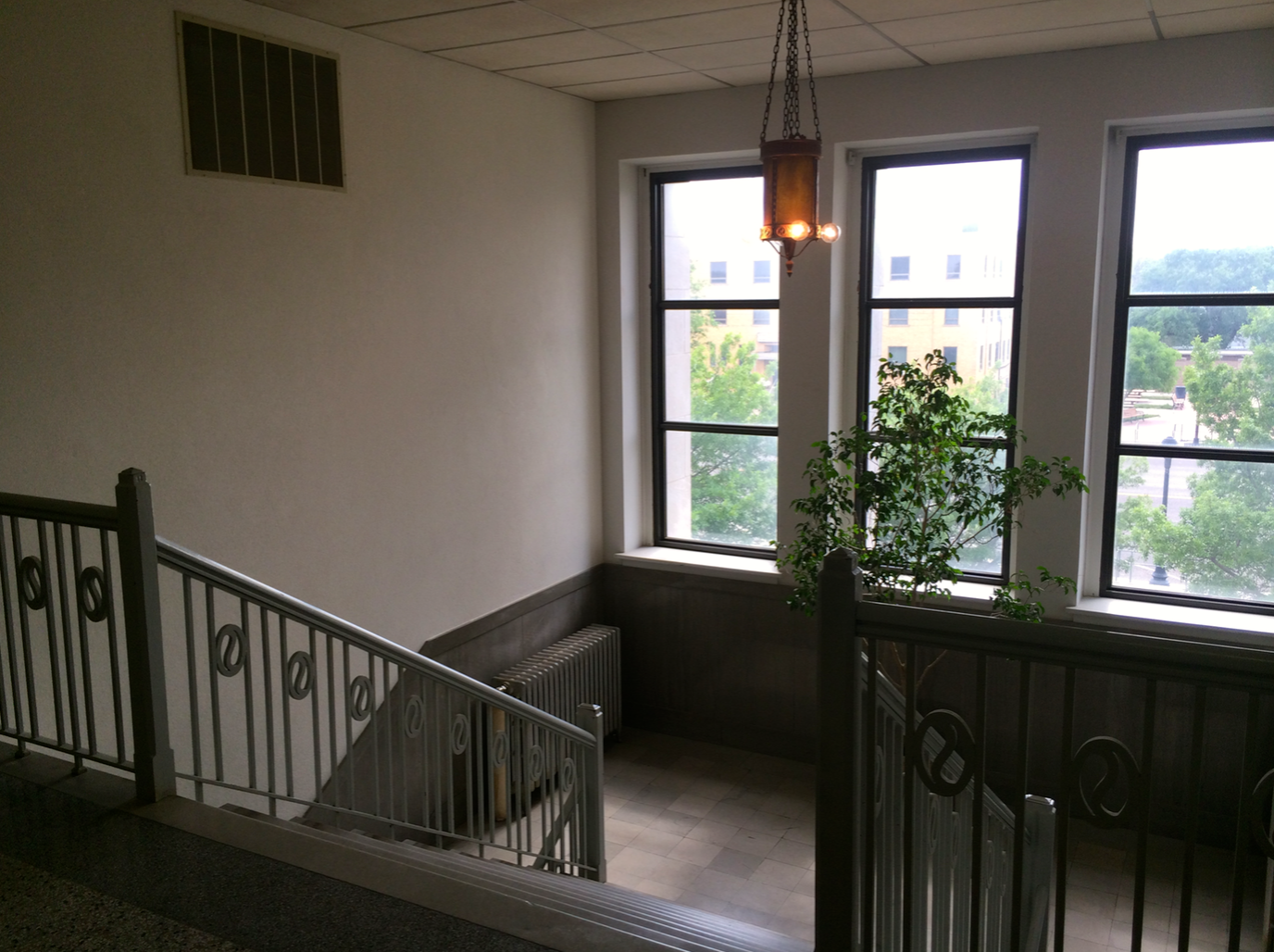 This is the second floor interior of the courthouse. 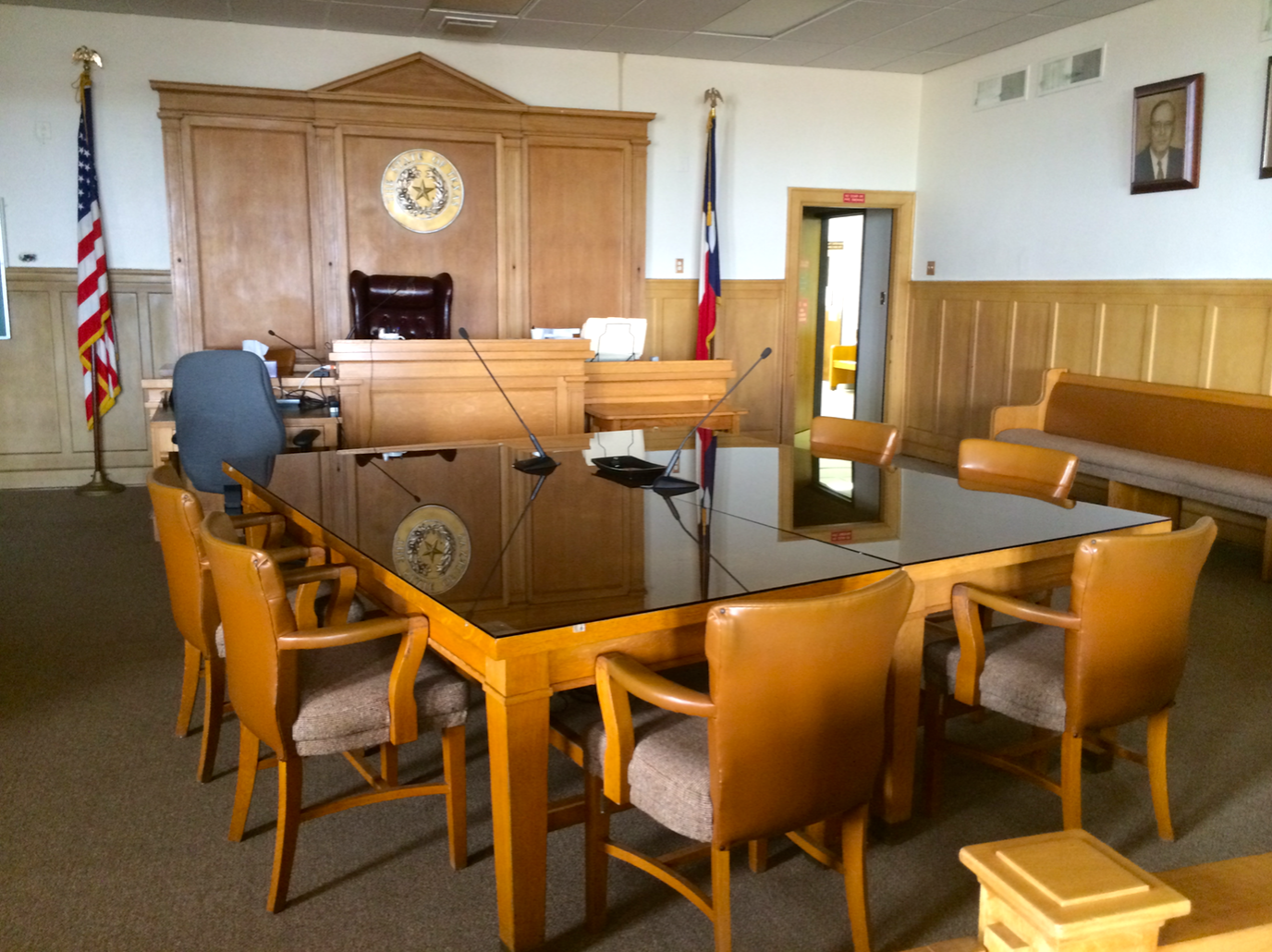 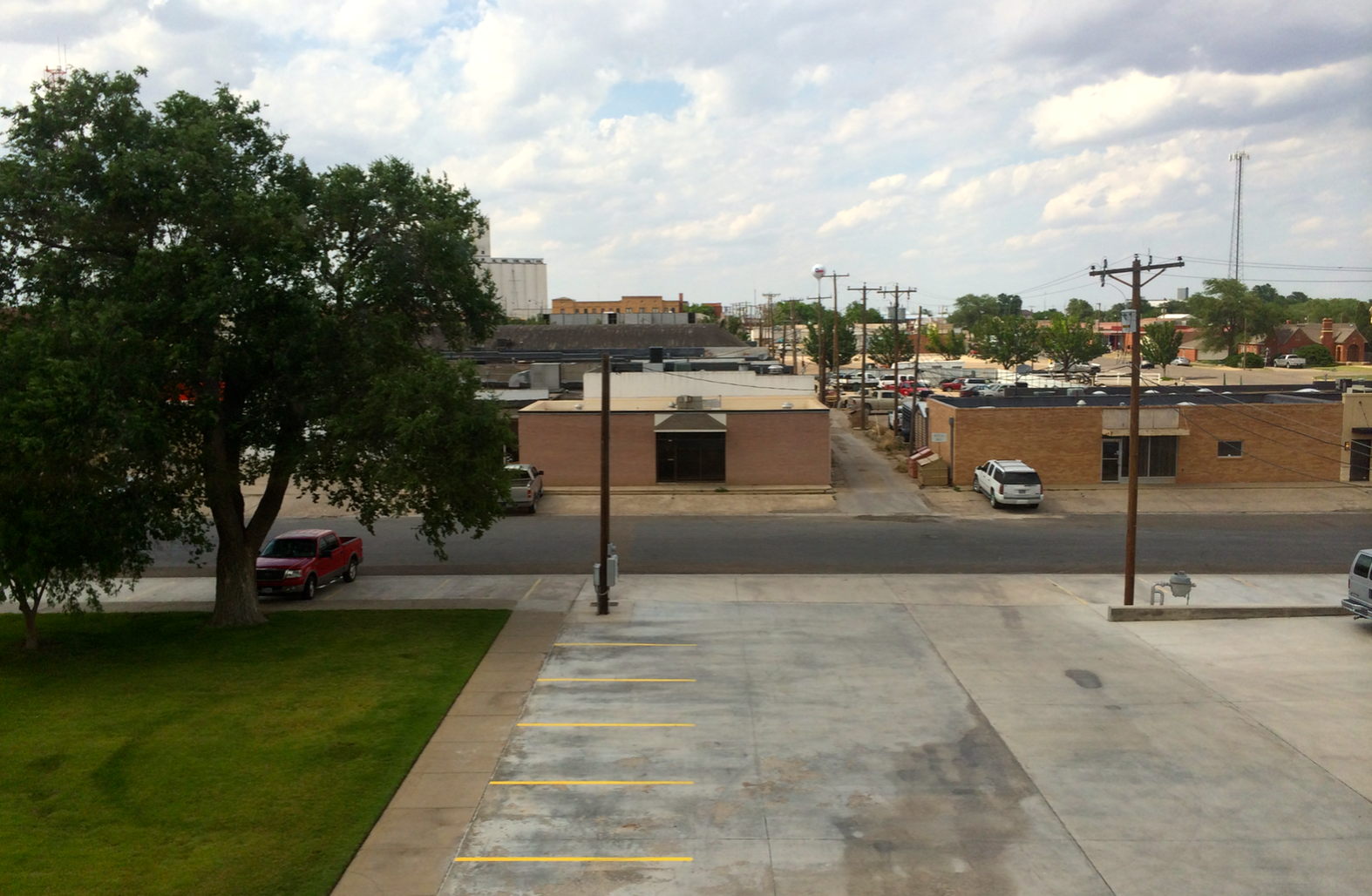 Downtown Perryton, from a courthouse window 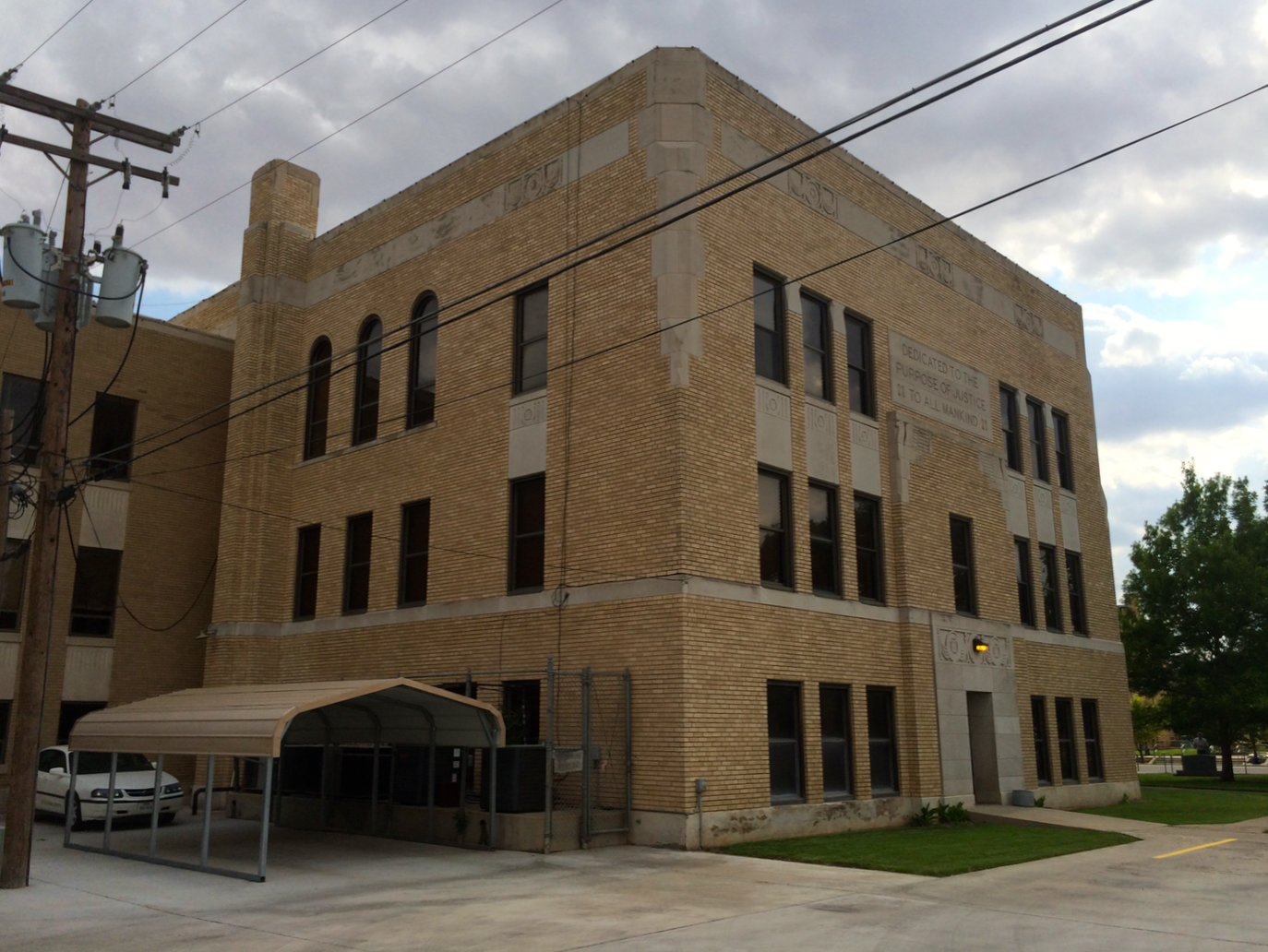 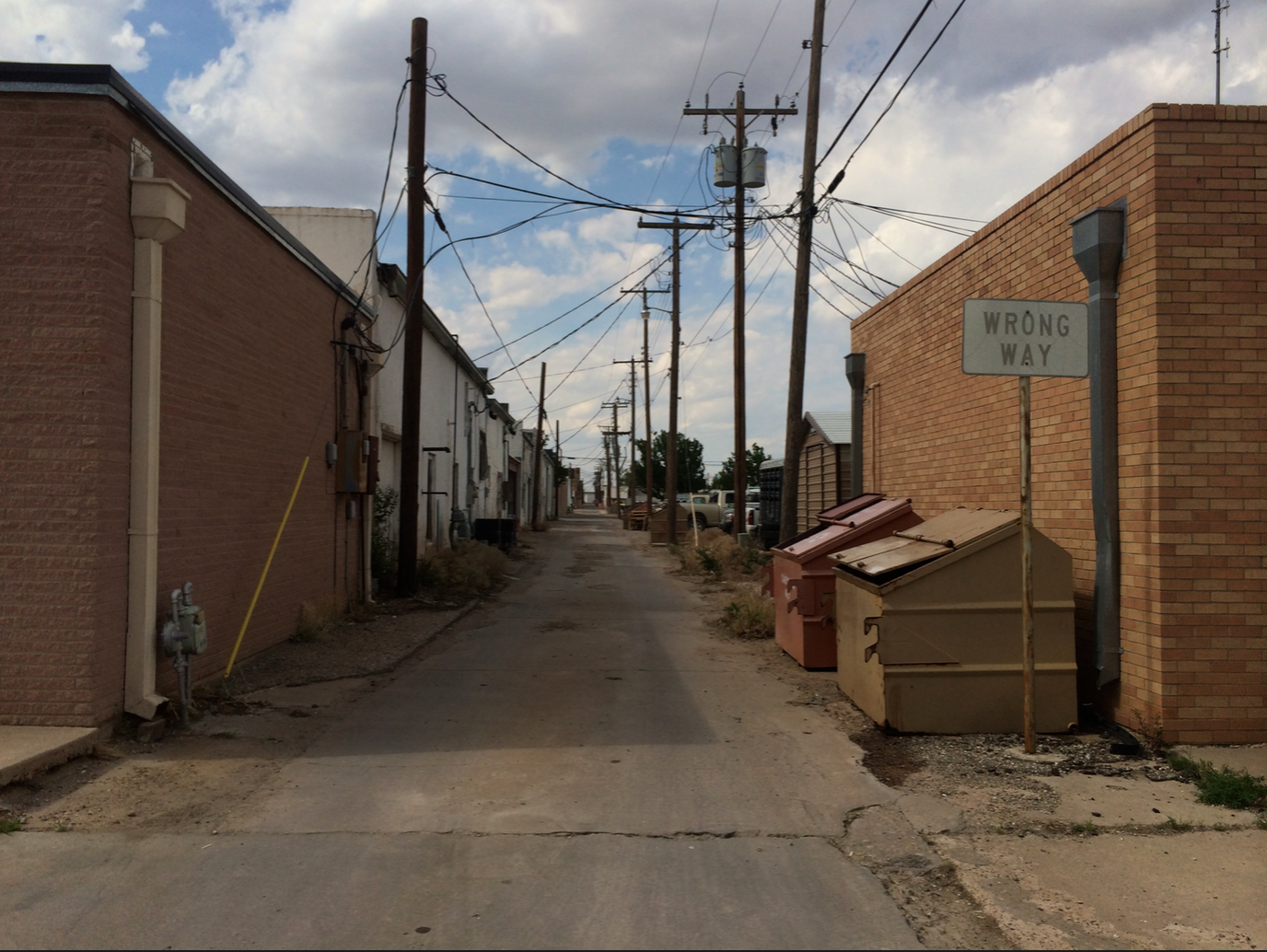 An alleyway view near the northern side of the courthouse

The southern façade (the original courthouse is on the left)

The view of 6th Avenue from the addition’s southern doors