“An Apachean culture occupied the Panhandle-Plains area in prehistoric times; the modern Apaches emerged subsequently but were pushed out of the region about 1700 by the Comanches, who dominated the area until the mid-1870s. During the early 1870s buffalo hunters traversed the area from the east, slaughtering the great southern herd as they went. In 1873 James H. Cator and his brother Robert, both buffalo hunters from England, established an outpost in what became Hansford County. They named this semipermanent camp Zulu, and it soon became known as Zulu Stockade. Over the next four years the buffalo were wiped out. In the Red River War of 1874 the Comanches were conquered; they were removed to Indian Territory in 1875 and 1876.”

“In 1876 the Texas legislature marked off Hansford County from land previously assigned to Young and Bexar districts; the new county was administered by authorities in Wheeler County. By 1880 the United States census counted eighteen people living in the county. That same year the county’s first town, Farwell, was established near the center of the county; in 1887 Hansford, a stage stop on the old Tascosa-Dodge City Trail, was established near Farwell on Palo Duro Creek. In 1889, when the county was politically organized, Hansford outpolled Farwell in a county-seat election.” 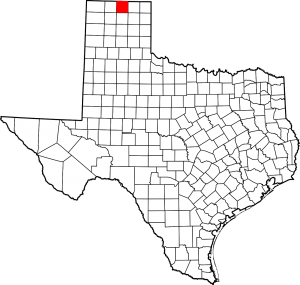 “Much of the county was at one time owned by the huge Turkey Track Ranch, while the rest was occupied by more modest ranching operations that cultivated farm crops in the creekbottoms. The census counted 133 residents in 1890 and 167 in 1900. Farwell and Hansford were still the only towns in Hansford County at the beginning of the twentieth century.”

“Though ranching early became the mainstay of the county’s economy, it did not develop as quickly or on as large a scale as in other counties of the western and southern Panhandle. As late as 1890 only twenty-three ranches were in operation in the county; the agricultural census reported 4,704 cattle that year. By 1900 the number of ranches had dropped to twenty-two, with 15,715 cattle and nineteen sheep reported. No crops were mentioned in the census.”

“After 1900 farmers began to move in. Land speculation and the foundation of several local land companies after 1900 led to the arrival of both Anglo-American and immigrant farmers. In 1909, for example, the Anders L. Mordt Land Company began to bring in Norwegians from the upper Midwest. For the next two decades these farmers settled the northern part of the county, centering around a rural community they called Oslo.”

“By 1910 Hansford County had 152 farms and ranches and the population had increased to 935. The agricultural census reported 11,239 cattle and more than 6,300 sheep in the county that year. Crop farming was slowly being established. Wheat was planted on about 3,900 acres and sorghum on 3,942 acres.”

“The arrival of farmers led to major changes in the economy and structure of the county. In 1920 the North Texas and Santa Fe Railway built a line from Shattuck, Oklahoma, to its new townsite of Spearman in southeastern Hansford County, and more and more farmers arrived to buy promising lands. Spearman soon became the leading town in the county; it absorbed both Farwell and Hansford by the mid-1920s, and in 1929 it became the county seat.”

“In the late 1920s the Chicago, Rock Island and Gulf Railway built southward from Liberal, Kansas, to Amarillo. Construction of the Rock Island line across the county led to the foundation in 1927 of Gruver, a railroad and farming community that eventually became the second largest town in the county. In 1931 the Santa Fe Railroad extended its line from Spearman to the southern edge of the county to link up with the Rock Island. The two railroads joined at a new townsite, Morse, which had been laid out in 1928.”

“Livestock production from ranching and feedlot operations accounted for approximately 65 percent of the total agricultural output of $107 million in 1983, and wheat, sorghum, oats, corn, and hay farming made up the balance. In 2002 the county had 290 farms and ranches covering 593,063 acres, 54 percent of which were devoted to cropland and 45 percent to pasture.”

A single, two-storied, red brick building came before the current one. It was built in 1888, and had ceased to exist by the time the Thirties arrived.

The extant courthouse was designed by David S. Castle of Abilene and built by Kreipke Construction Co. In 1958, the building was expanded and remodeled by John P. Merk. According to Hansford County Sheriff Tim Glass, the full courthouse cost the county approximately $30-33,000.

According to the Texas Historical Commission, it’s a:

“3-story, brick and cast concrete structure with casement windows and a vertical entrance with relief decoration. Cast stone has also been used to create a swag motif at the upper corners of each ‘block’ of the building.” 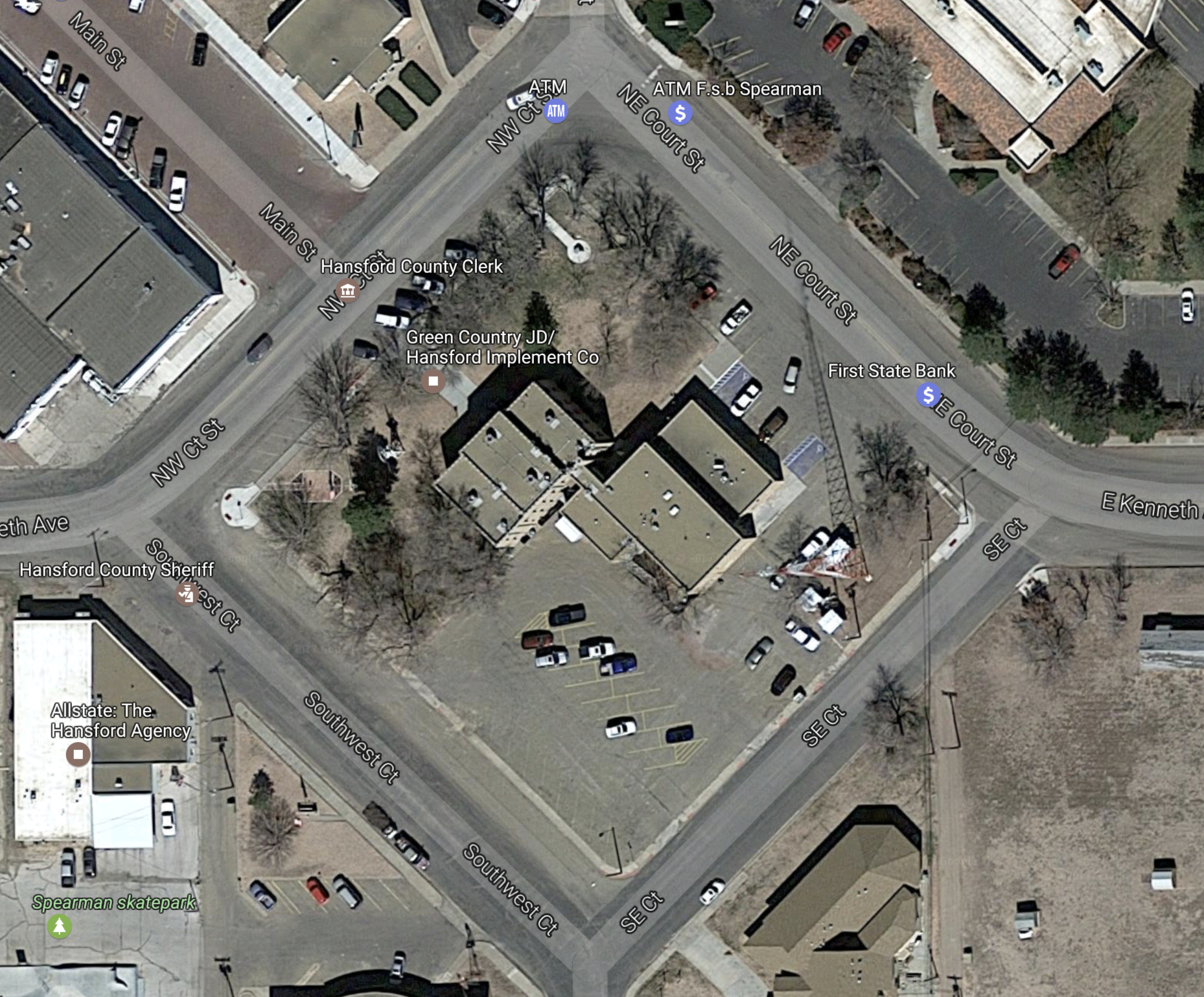 Of some interesting note, the courthouse is centered in an “island” in downtown Spearman, surrounded by a diamond of roadways. Main Street stretches away to the northwest of the main entrance, taking the rest of Spearman’s downtown district away with it except for City Hall (which is just south of the courthouse). 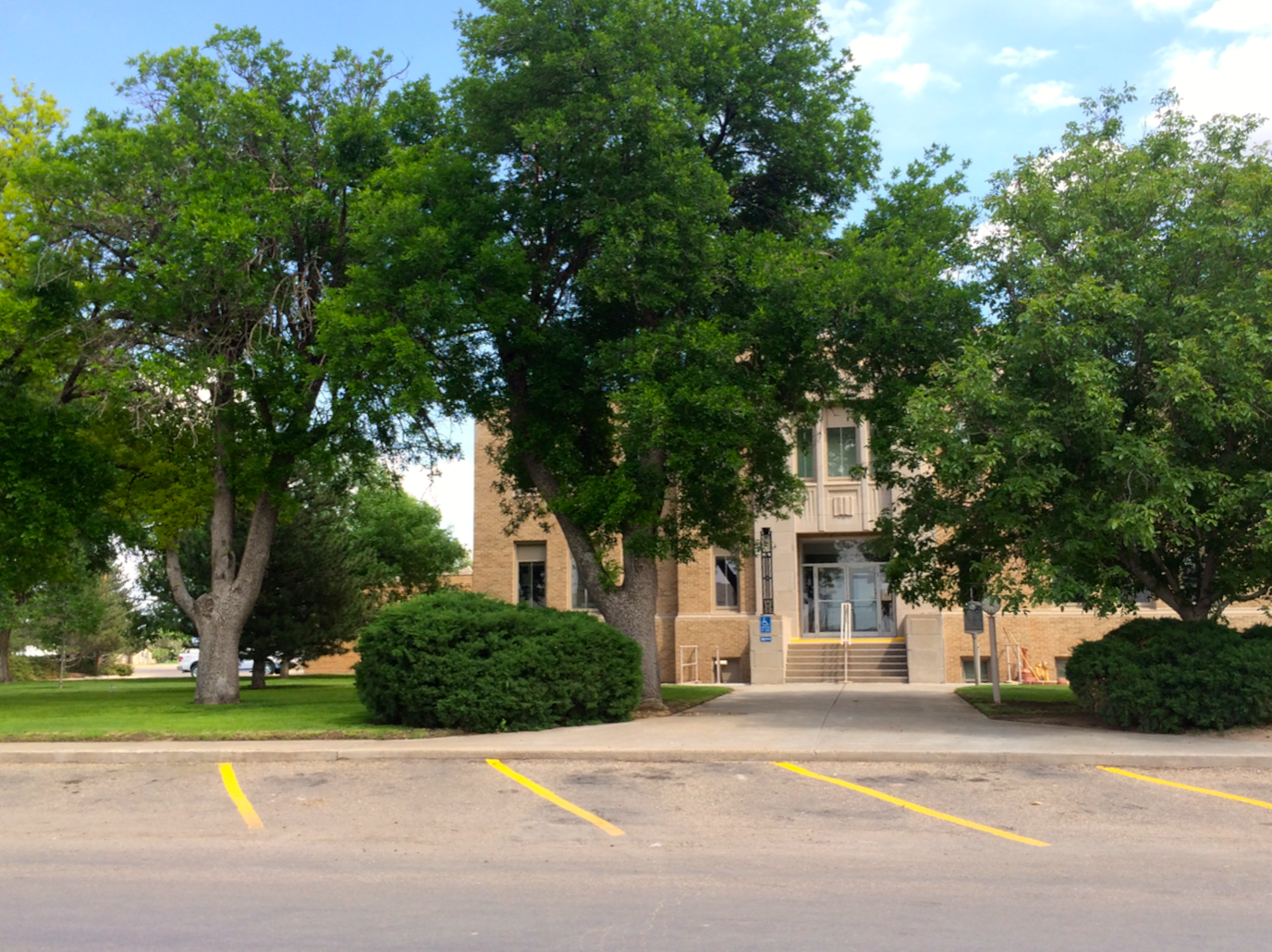 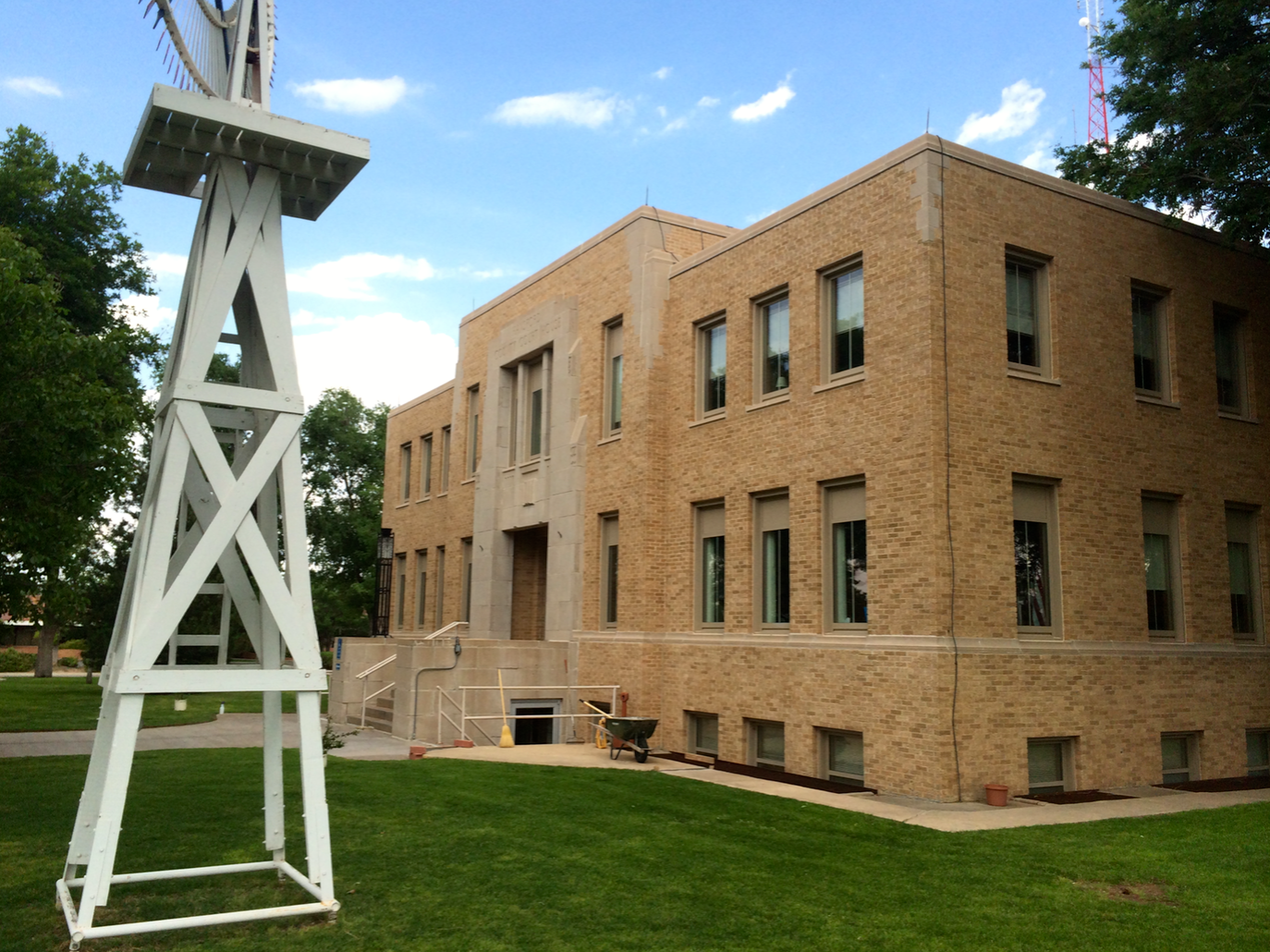 The northern façade, facing the intersection of NW Court Street and Main Street 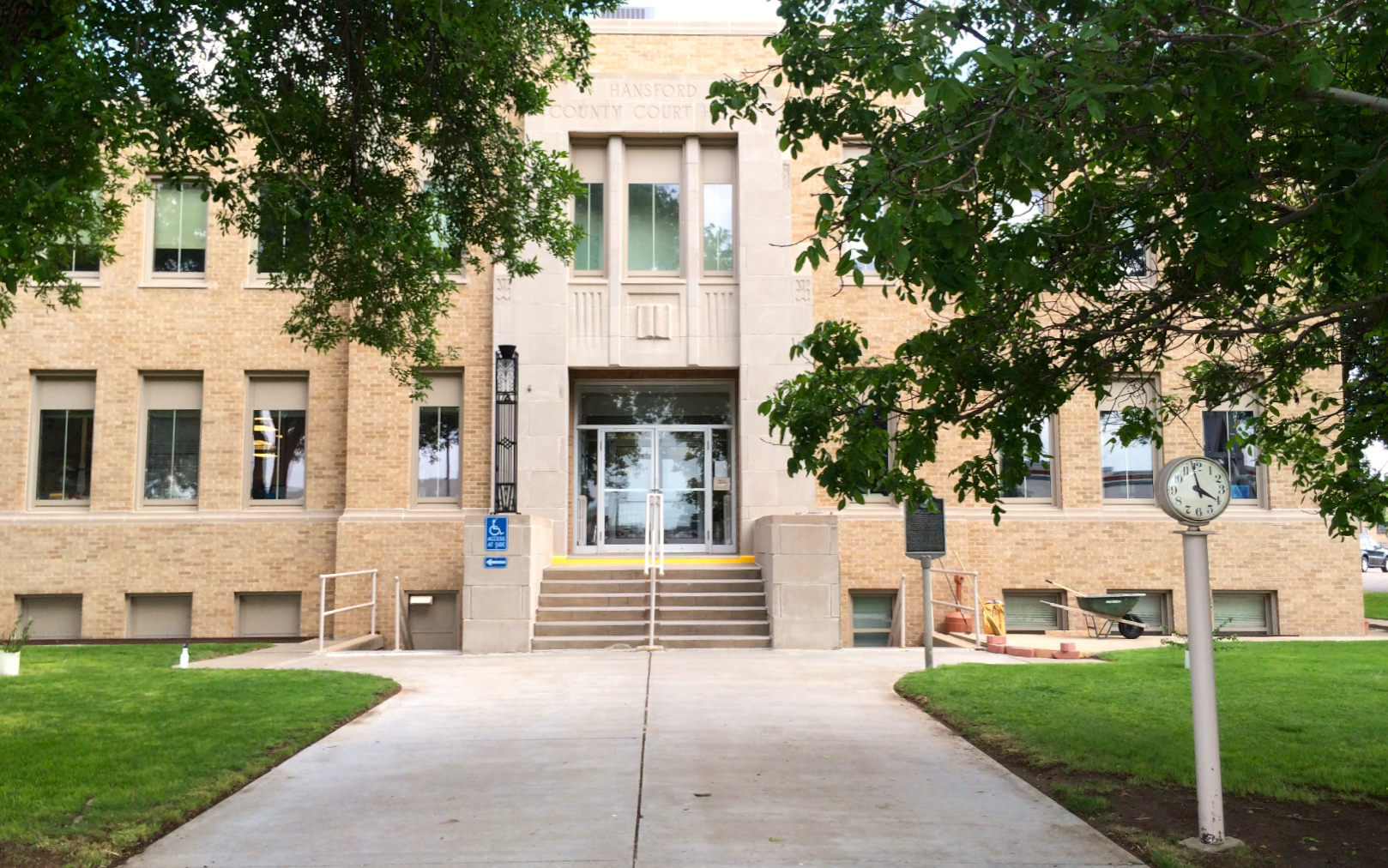 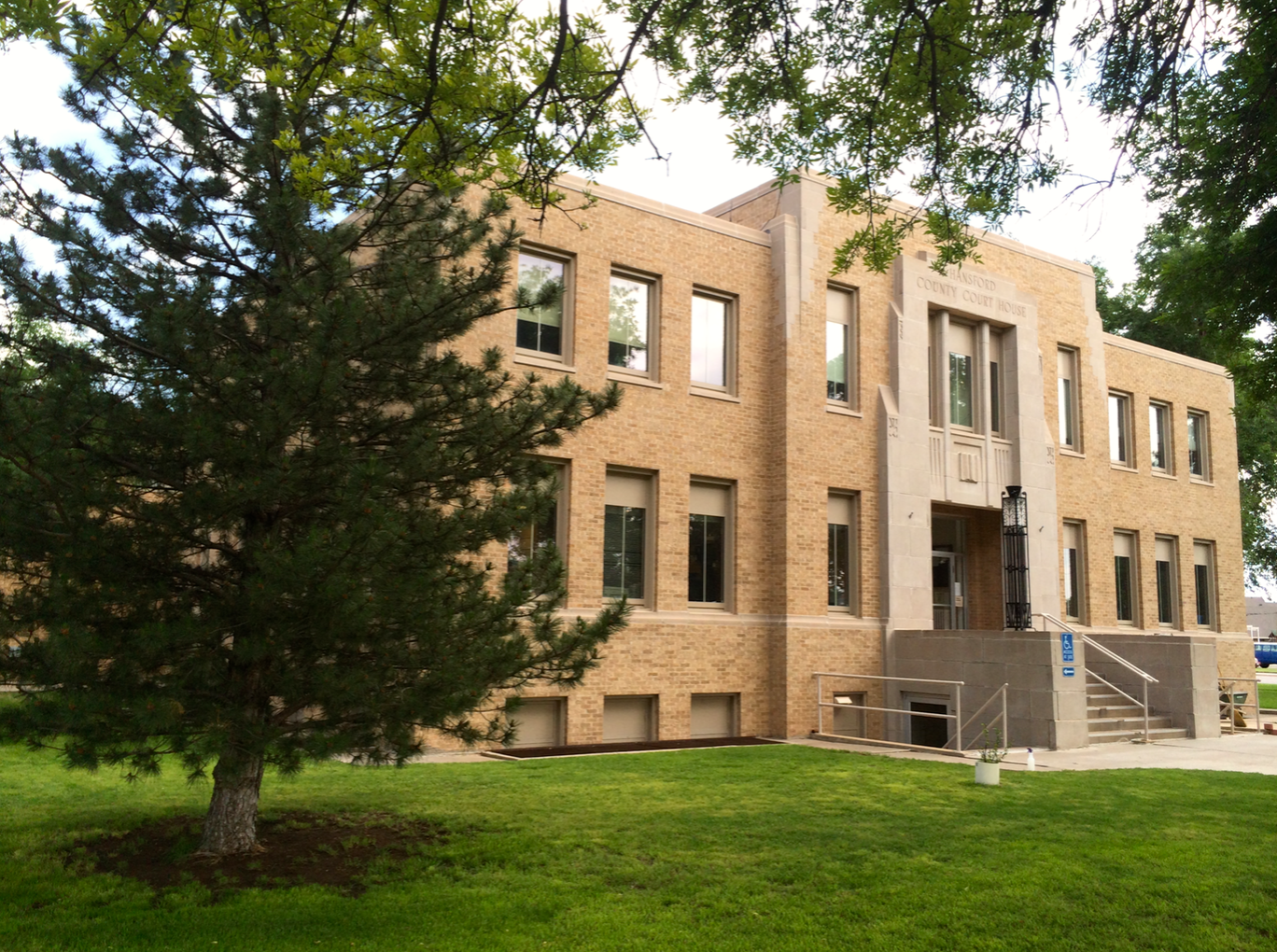 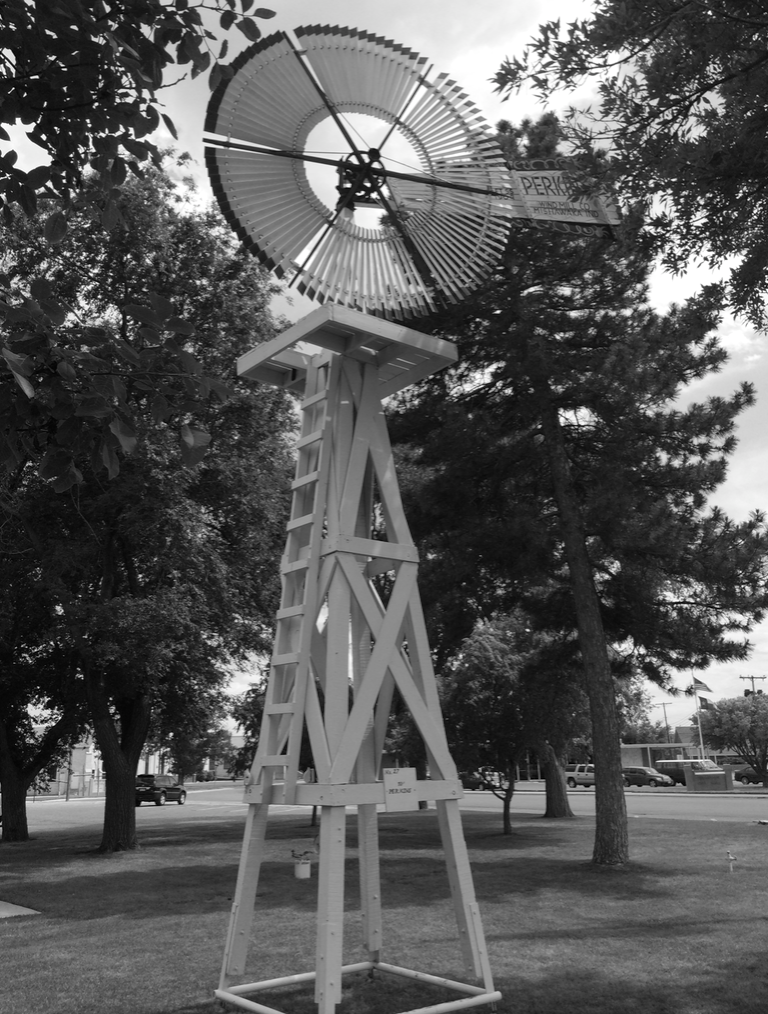 A windmill can be found on the northwest corner of the courthouse lawn. 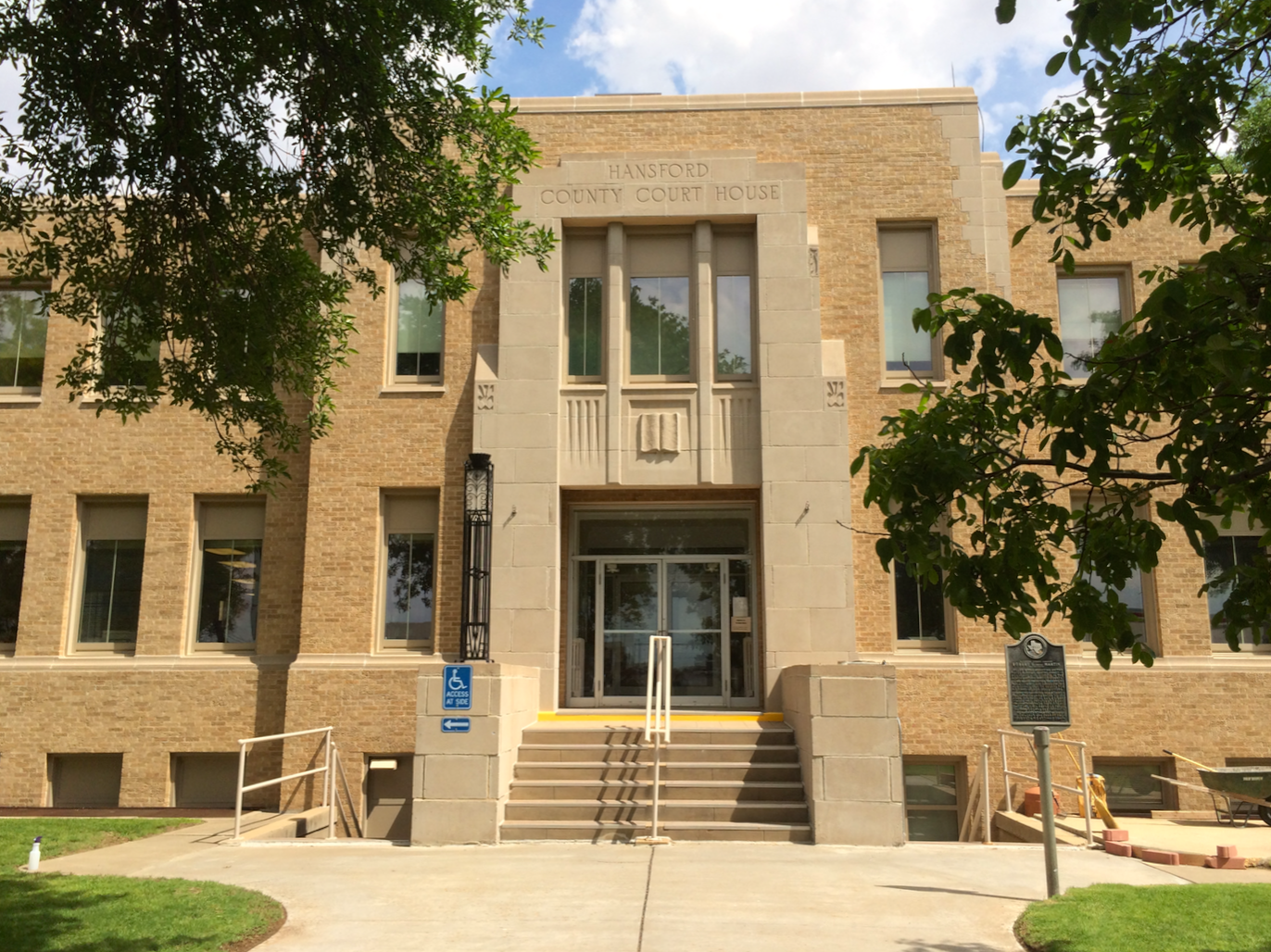 One of the two large entry lights was missing at the time of my visit. Sheriff Glass said that by order of the judge, it had been taken away for repair. 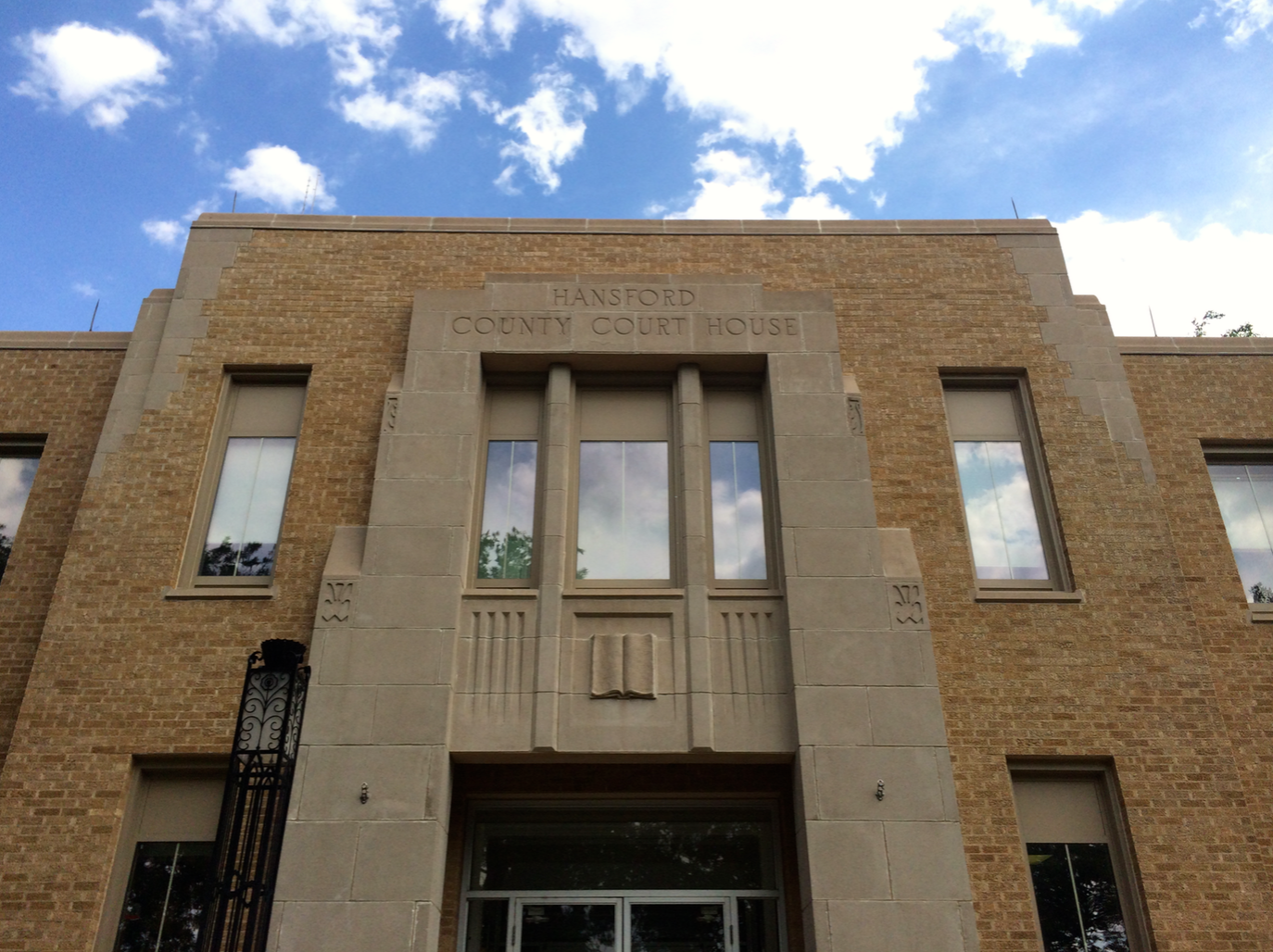 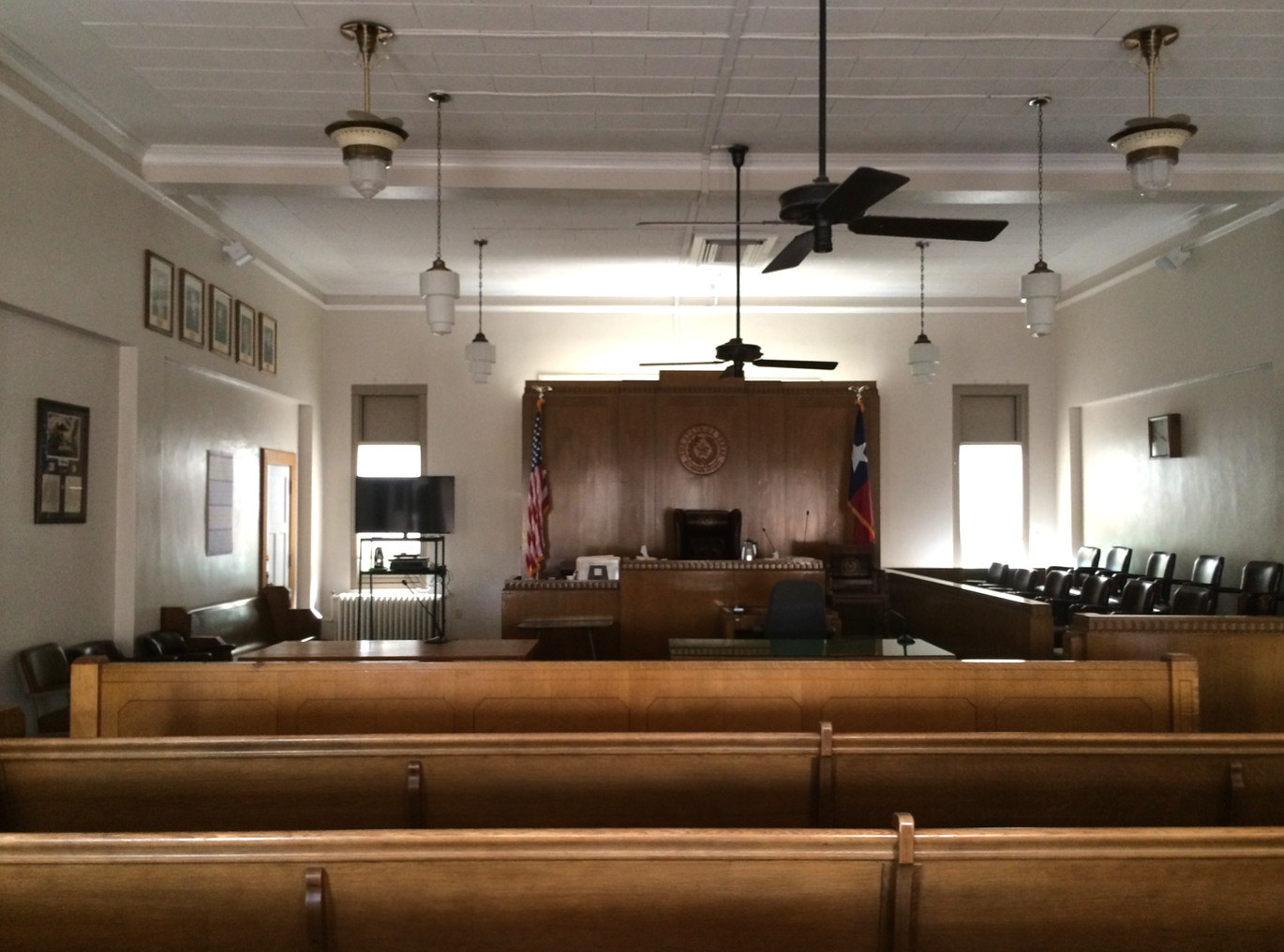 This is the second-floor district courtroom. I’m a fan of these peculiar lighting fixtures.

This is one of the most interesting fan/lighting fixtures I’ve ever seen. Notice how small the fan blades are resting atop the light. I wonder if these are original.

The full eastern façade of the building, annex and original

Another view of the eastern side, on NE Court Street 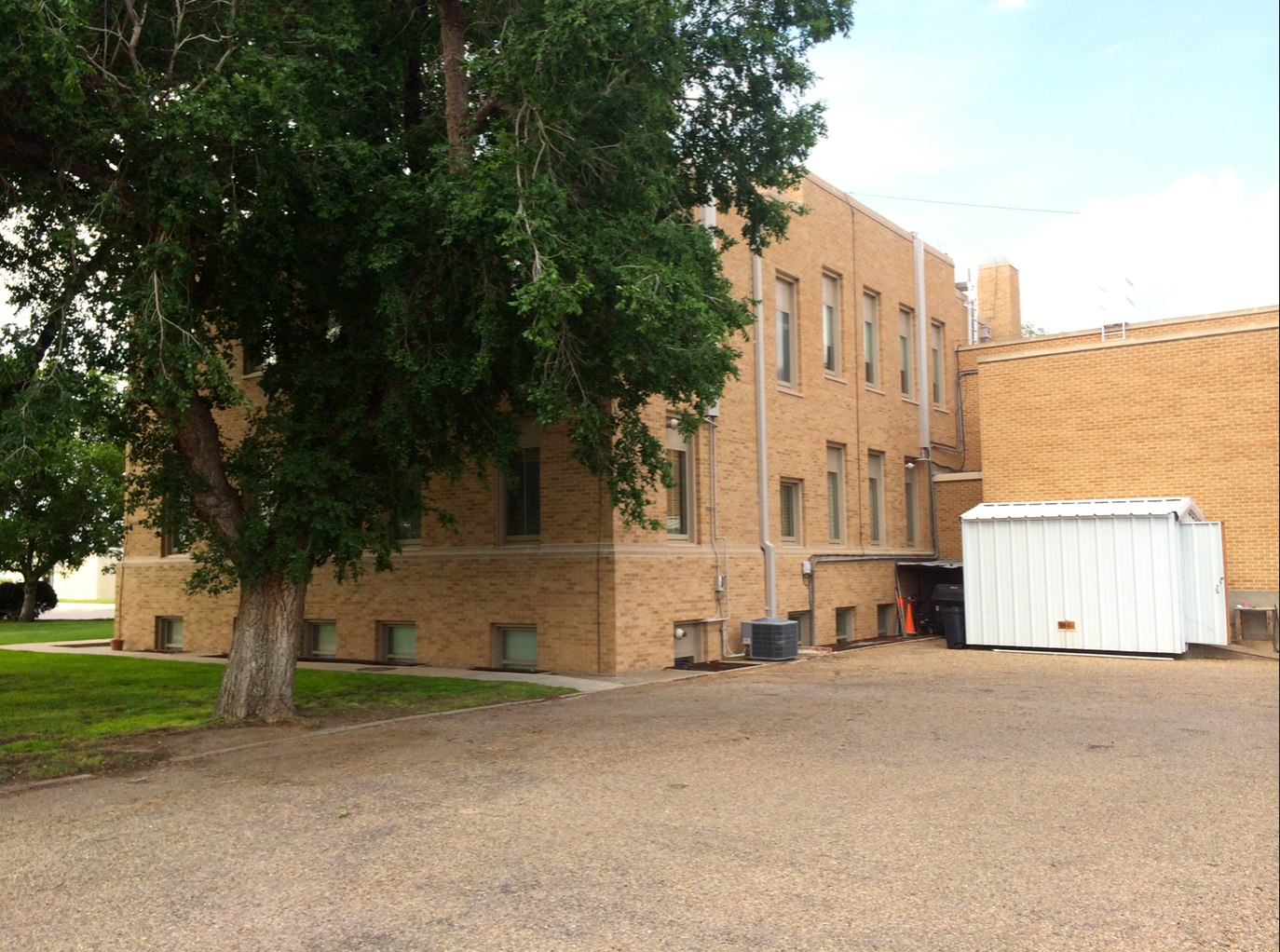 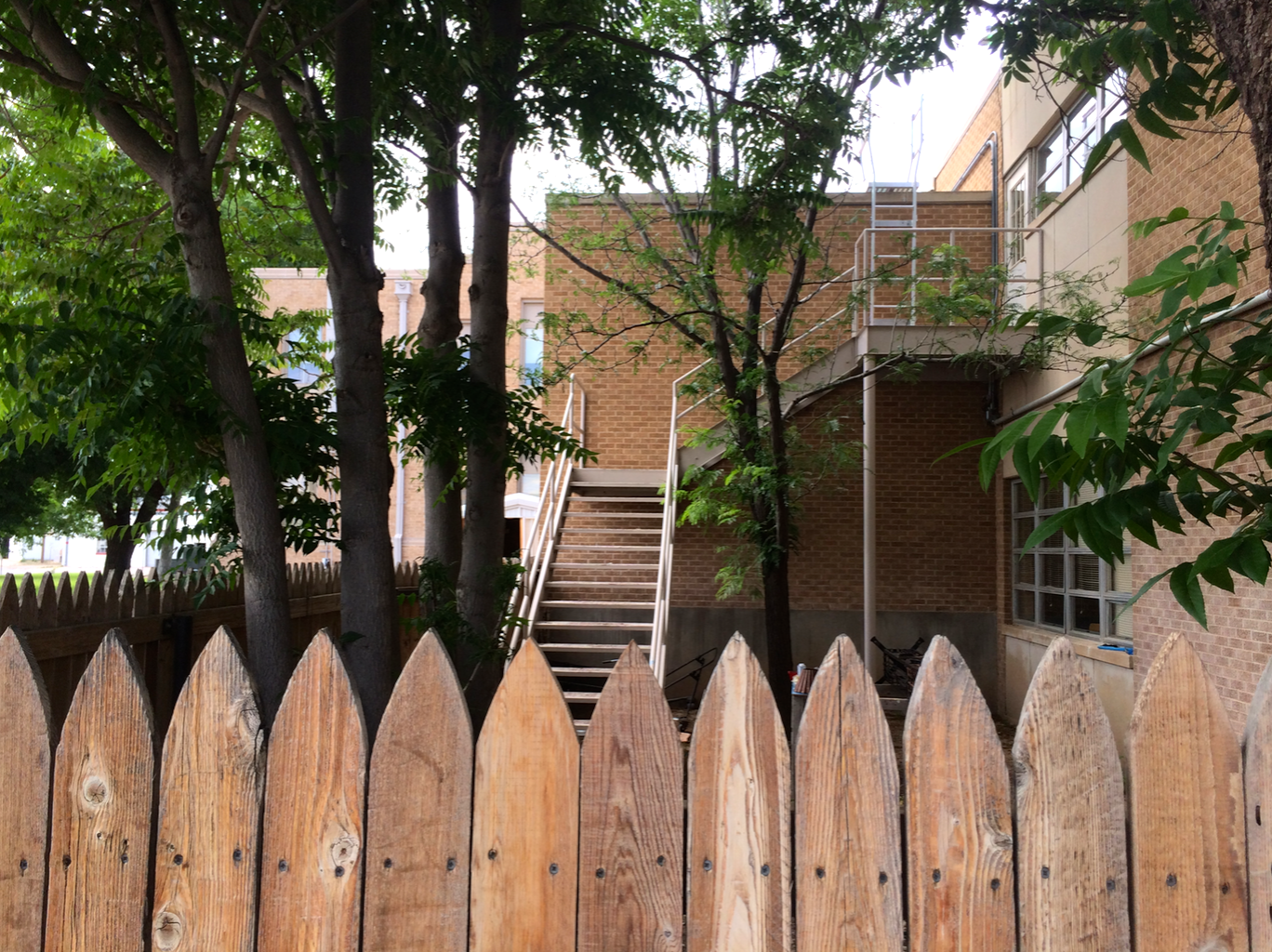 This is a view from behind a fence at the courthouse annex. The actual courthouse can be seen just beyond the trees 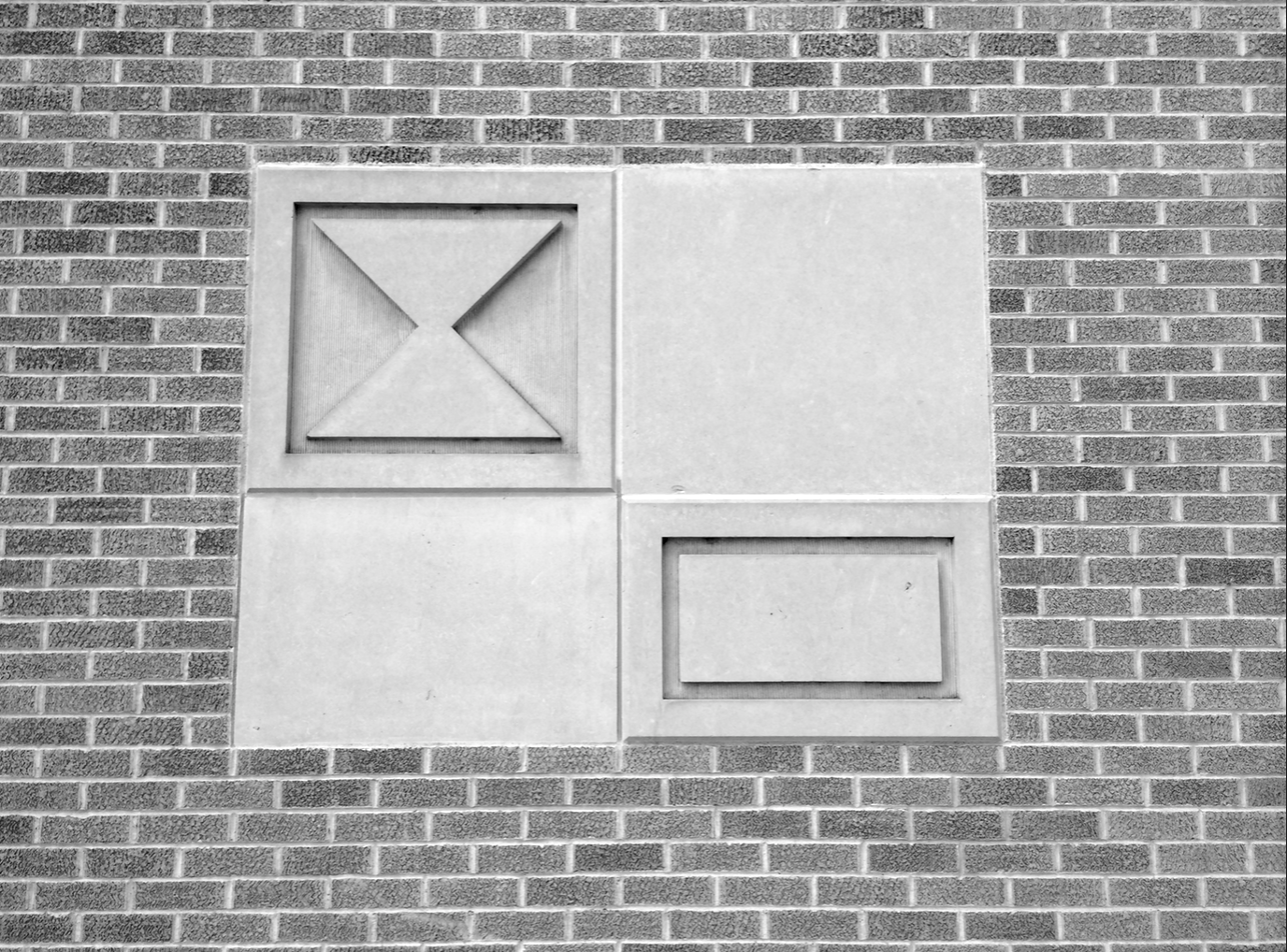 Ornamentation along the back wall of the courthouse annex

Spearman City Hall is across Southwest Court to the southwest of the courthouse. 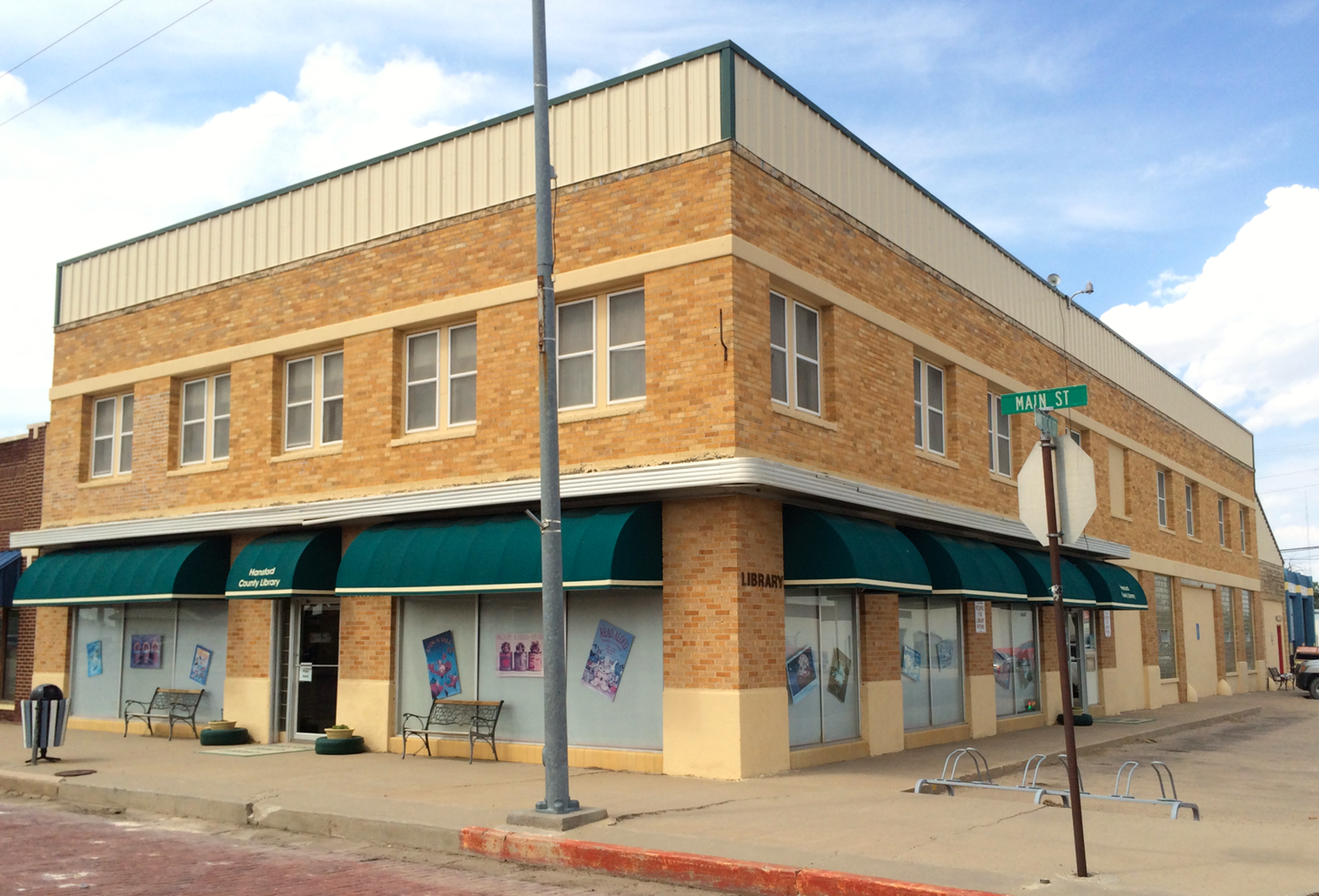 Hansford County Library, at the corner of Main & Hancock