“The county, named for Sidney Sherman, a veteran of the Texas Revolution, extends across 923 square miles of nearly level land covered by prairie grasses, some sagebrush, and yucca; elevations range from 3,200 to 3,800 feet above sea level. The area is drained by the North Fork of the Canadian River, which cuts across the northwestern corner of the county, and by Frisco, Coldwater, and North Palo Duro creeks.”

“In 1876 the Texas state legislature established Sherman County from lands formerly assigned to Bexar County. The area was attached to Oldham County for administrative purposes until 1889. When first surveyed in 1874, alternate sections of the land were given to railroads as compensation for the survey, and the even-numbered sections were reserved for homesteaders. Partly because of the area’s limited surface water and its distance from existing settlements, however, the population grew slowly. J. W. Rawlings built a bachelor’s quarters near the Coldwater springs in 1874, and by 1880 cattlemen had begun to move in to graze their herds on the open range.” 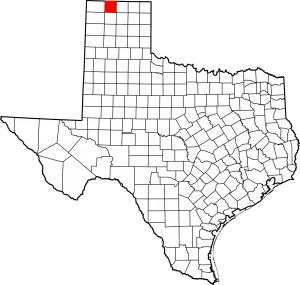 “The county was organized in 1889. Coldwater, a small settlement founded by the Loomis family near the center of the county, was designated the county seat by 1890. According to the United States census, there were thirty-four people living in Sherman County in 1890. The agricultural census for that year reported eight farms, encompassing 6,400 acres. There were about 500 cattle in the area, and no crops were reported. A small rock courthouse was built at Coldwater in 1891, and soon C. F. Randolf began to publish the Sherman County Banner, the area’s first newspaper, there.”

“During the 1890s much of the land in the county was incorporated into large ranches by men such as Dick Pincham, J. M. Turner, and William B. Slaughter. John Lanners, who settled on a claim under the Four-Section Act, ran a mule-drawn freight line between 1890 and 1898 to supply the area’s ranchers. By 1900 there were eighteen ranches and farms, encompassing 195,000 acres, in the county, and the population had increased to 104. Cattle ranching dominated the local economy.”

“Farmers began to move into the area in numbers during the first years of the twentieth century, especially after 1901, when the Chicago, Rock Island and Gulf Railway built across the northwest corner of the county. Growth was also encouraged by the introduction of mechanized water-well drilling. The D. D. Spurlocks settled in the south central part of the county about this time, and the J. T. Brown family moved in with well-drilling equipment in 1902.”

“The Norton family, from Kentucky, bought ninety-six sections of railroad land, which were managed for them by Walter Colton. Efforts to move the county seat to a site on the railroad began before the tracks were laid. Walter Colton, who owned a section of land on the line, formed a partnership with C. F. Rudolph to form a townsite (called Stratford) and to make it the new county seat. Their hopes were realized in an election held in May 1901, when voters chose to move the local government to Stratford.”

“Opposition to the move was so strong that county officials transferred the county records in the middle of the night and held court in a tent in Stratford after midnight to make the move official. Bitterness between the factions caused Governor Joseph D. Sayers to order Texas Rangers to Stratford to keep the peace. By the time the rangers arrived, however, the district court suit had been dismissed and Stratford was generally accepted as the new site. A new newspaper, the Stratford Star, began to be published about this time.”

“By 1910 there were 165 farms and ranches, encompassing 303,000 acres, in Sherman County, and the population had grown to 1,376. Crop farming had also been established; 2,757 acres were planted in wheat that year, and 3,362 acres were devoted to sorghum. Ranching was still at the center of the local economy, although the number of cattle in the county had declined to 22,400. In 1908 the Pronger Brothers ranch introduced registered Hereford cattle into the county.”

“There was a particularly large influx of farmers from Oklahoma, Kansas, and other states between 1926 and 1928. Wheat became the county’s most important crop; by 1930, 99,000 acres were devoted to the grain. As crop production expanded, the number of cattle declined somewhat but held fairly steady; 20,262 cattle were reported in 1920 and 20,772 in 1930. By 1930 there were 298 farms and ranches, and the population had increased to 2,314. Many residents suffered reverses during the Great Depression of the 1930s.”

“The county gained another railroad link in 1930, when the Santa Fe built a line through the area, but drought severely hampered farming during the first years of the decade. In 1933 the area received only ten inches of rain, and during the mid-1930s its residents were caught in the Dust Bowl. Wheat production had fully recovered by 1940, however, when 130,000 acres were planted in wheat. Sherman County lost 10 percent of its population during the 1930s; by 1940 there were only 2,026 residents.”

“The pattern of periodic expansions of crop farming followed by drought-induced retrenchments continued during the two decades following the depression. Crop cultivation revived during the 1940s and then fell during an extended drought in the 1950s. Almost 168,000 acres of cropland were harvested in the county in 1940, more than 275,000 in 1950, and about 193,000 in 1960. In the 1960s large-scale irrigation was introduced, and a rapid expansion of crop farming ensued. The abundance of grain encouraged the establishment of big cattle feedyards in the late 1960s. In 1975 the county ranked seventh in the nation in per capita income.”

“Sherman County’s population dropped to 3,164 by 1980, then rose slightly to reach 3,185 by 1990. The census counted 3,084 people in the county in 2014. About 55.5 percent were Anglo, 0.9 percent African American, and 42.3 percent Hispanic. Communities include Stratford (population, 2,050), the county seat, and Texhoma, which straddles the Texas-Oklahoma border (352 on the Texas side). Nothing except a tiny cemetery is left of Coldwater, the original county seat. Irrigated crops furnish cover for game birds, and pheasant season in December attracts hunters from all parts of the country to the area.” 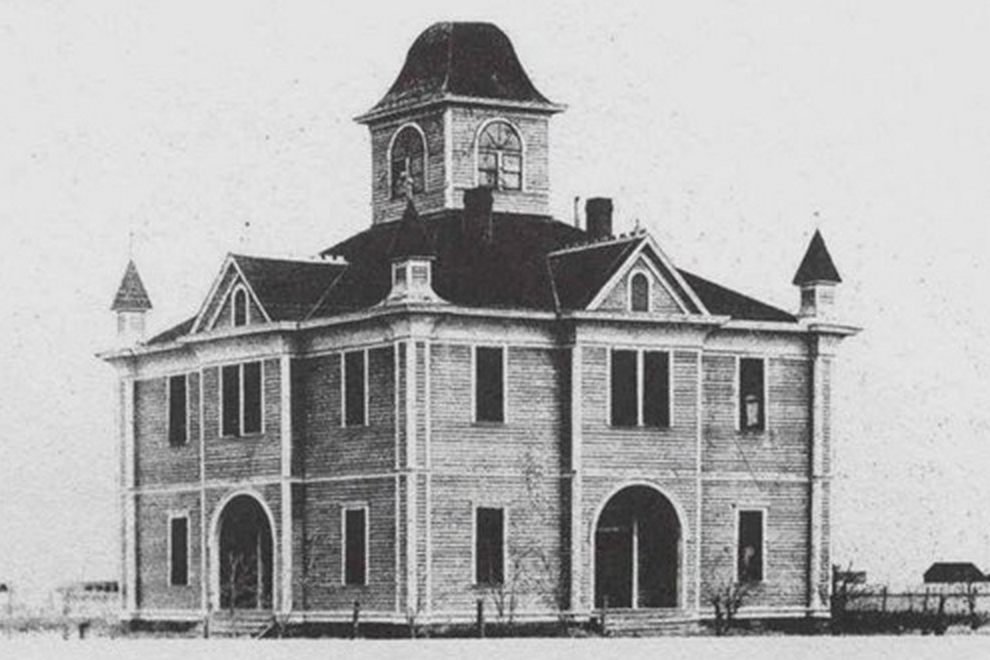 This design of architect H.W. White was constructed in Statford after the county seat moved there from Coldwater. Previously, a single-storied, stone, dugout-like building with an out-of-place, pyramidal roof had served. That one dated from 1889.

The 1901 building was constructed by O.W. Coffee & W.H. Farmer and lasted until 1922. That year, an inferno swallowed it whole and plans were put in motion for a replacement. 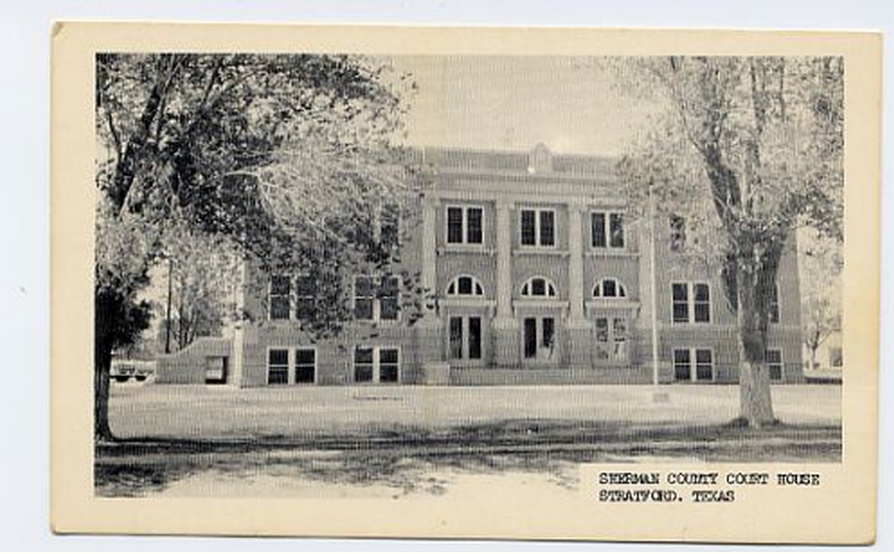 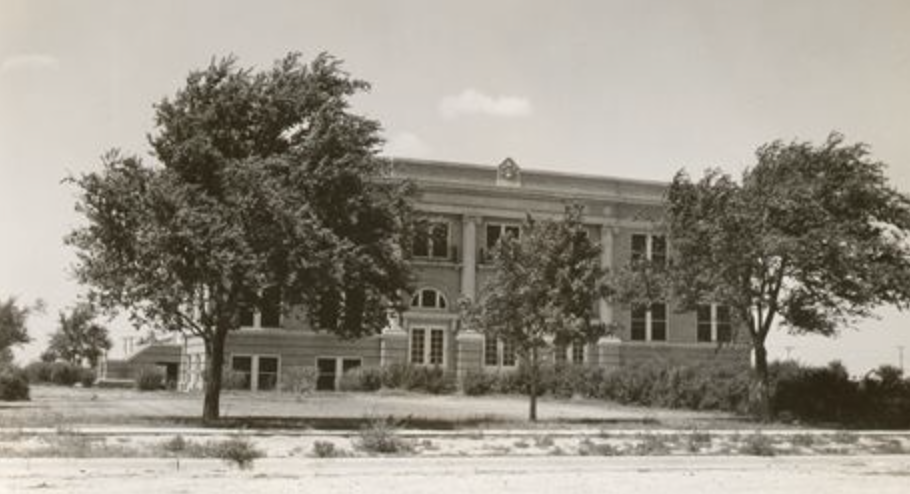 The architects involved here were Parker & Rittenberry. Their Classical Revival design came to life thanks to the work of contractor J.W. Mordecai. 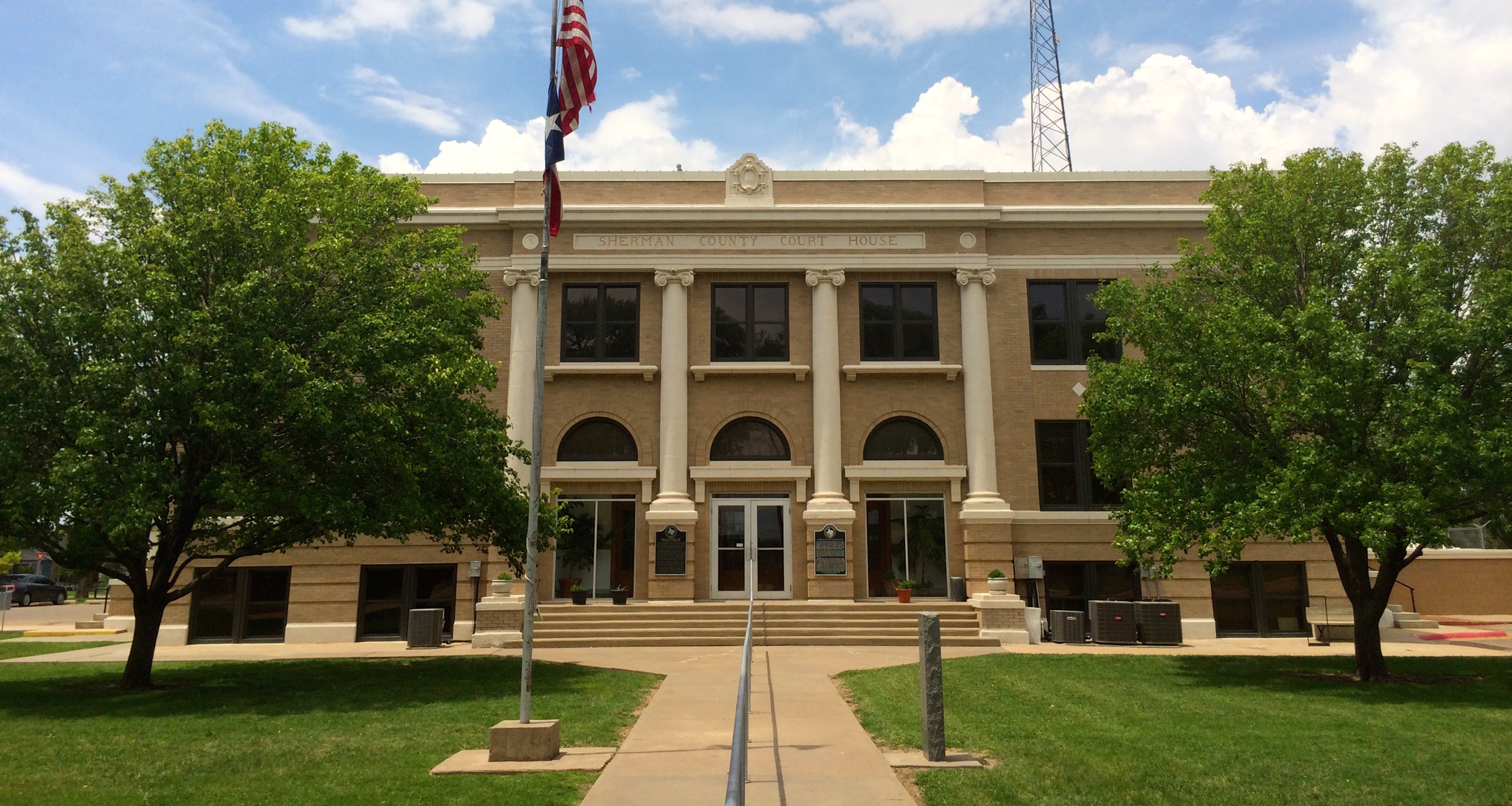 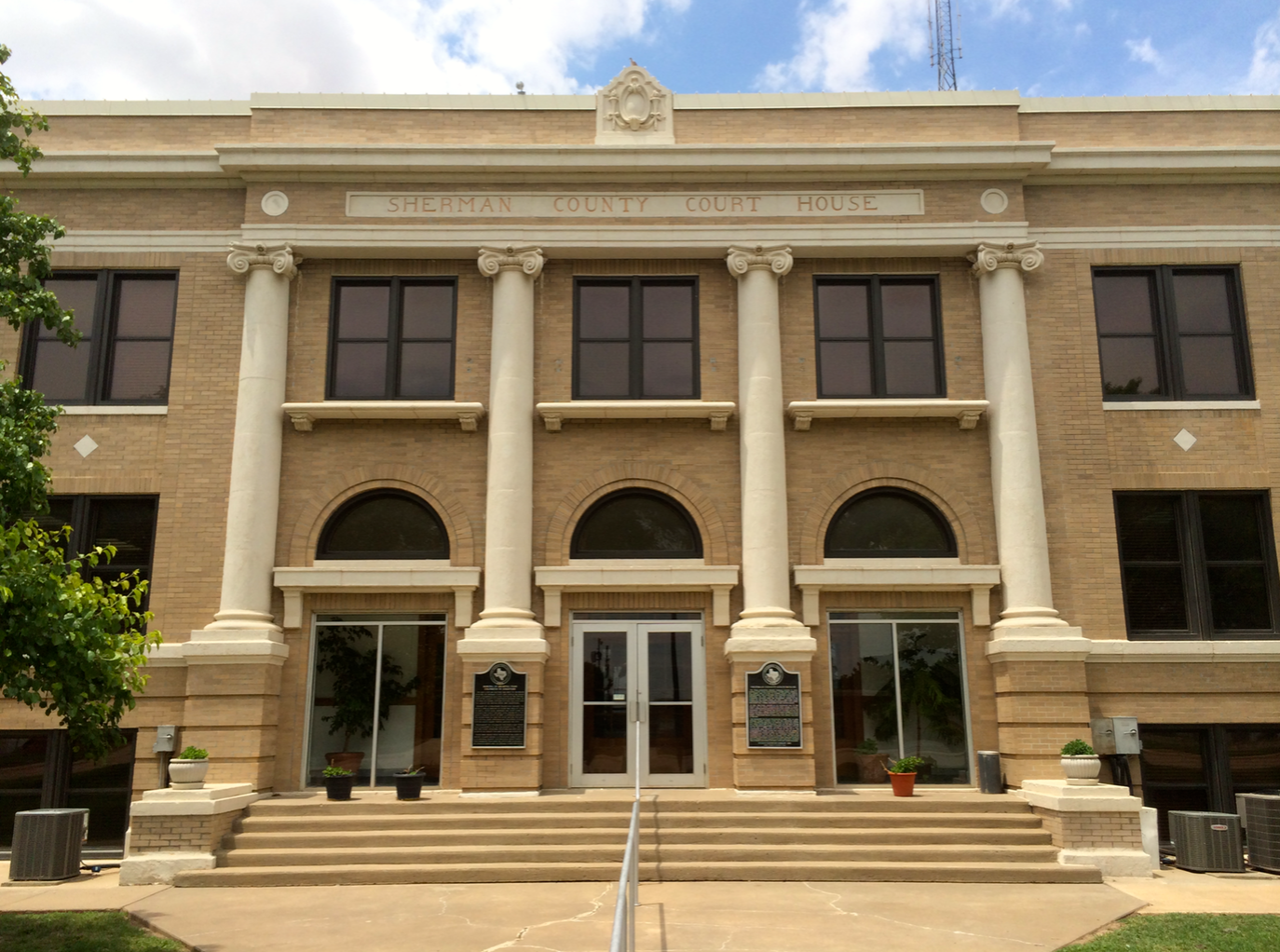 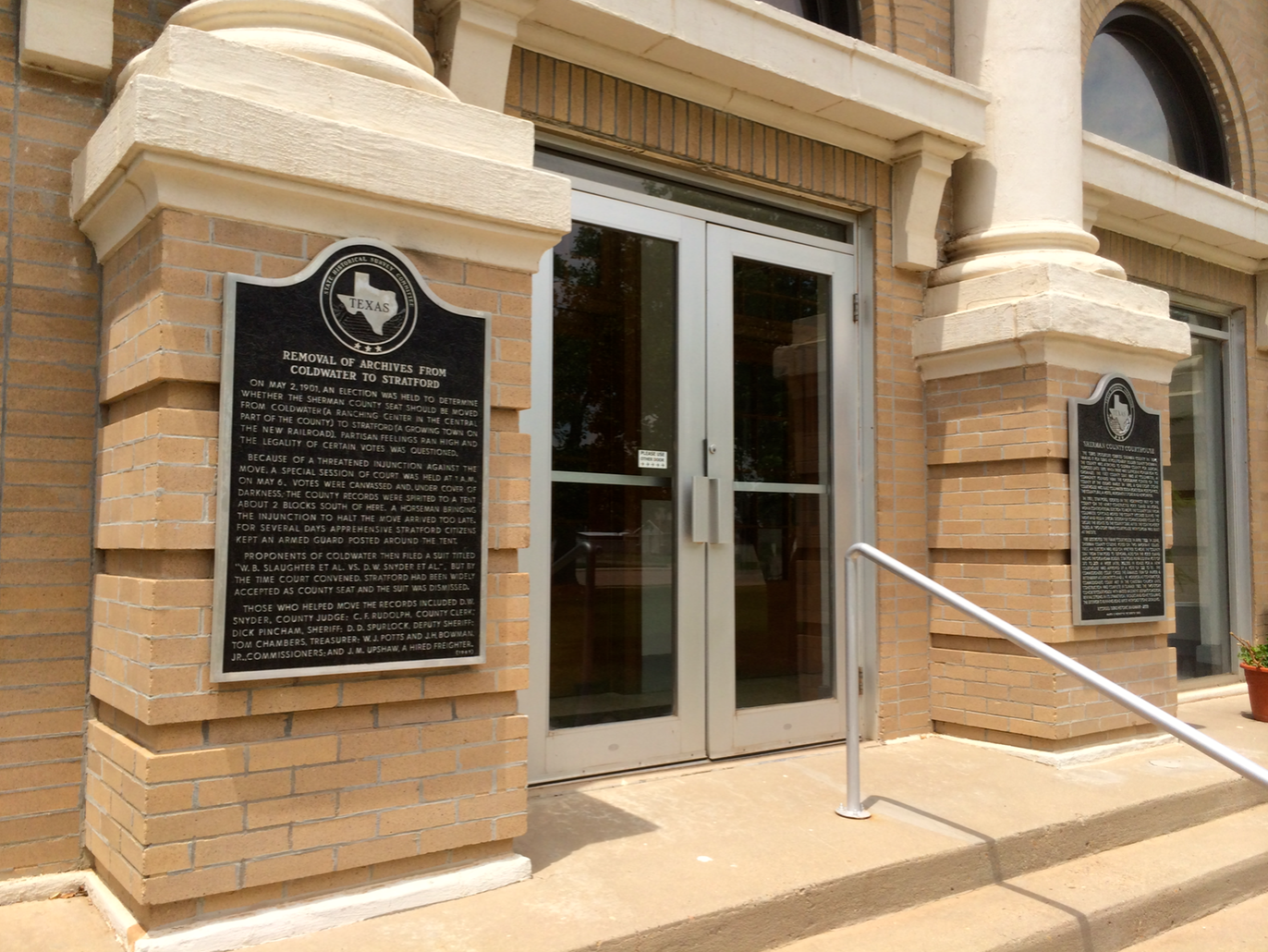 I’ve never again found two historical markers (of this size) actually attached to the courthouse, as opposed to being on posts in the lawn. You can only find this in Sherman County. 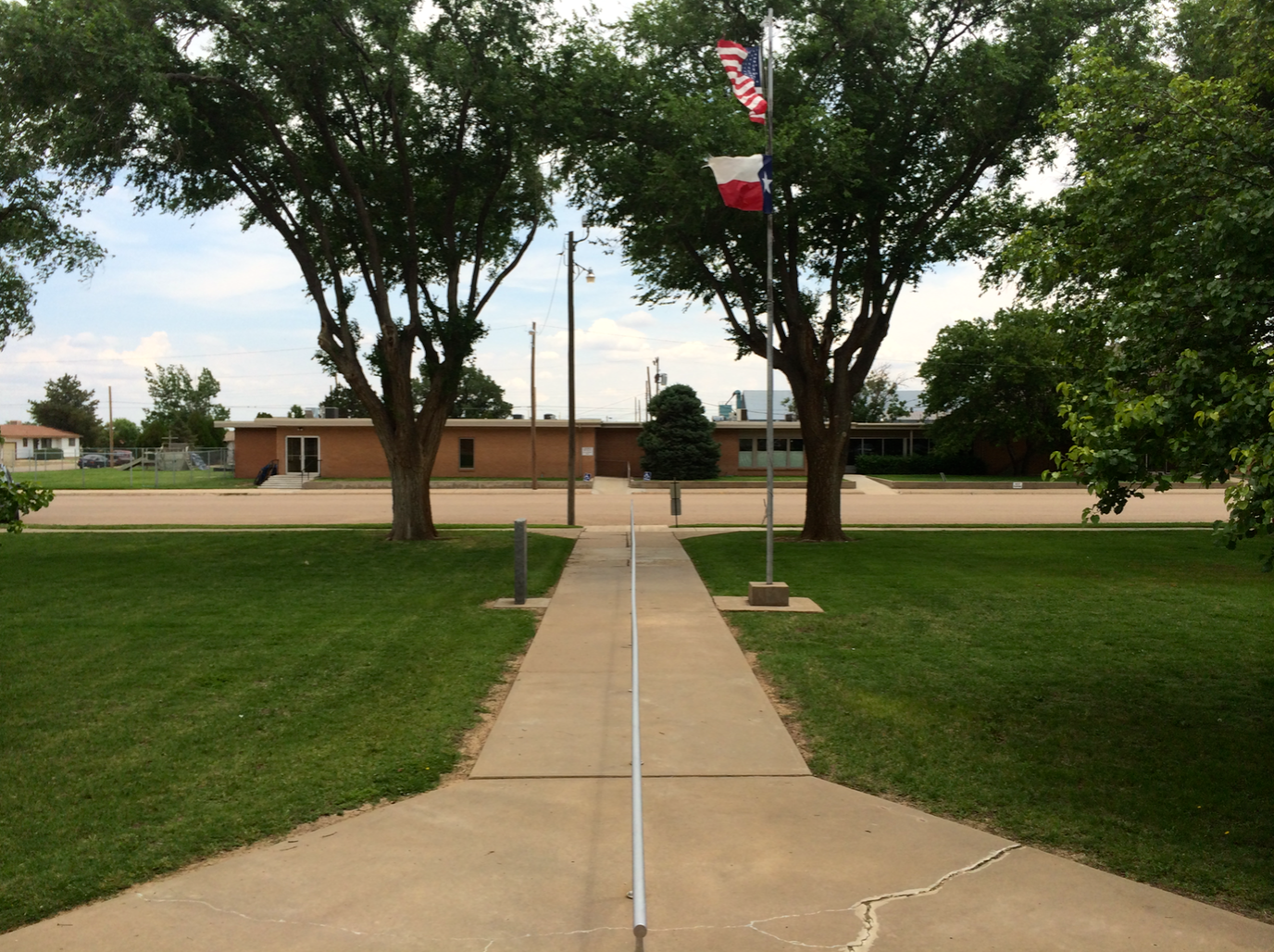 The view of Main Street from the courthouse’s main entrance 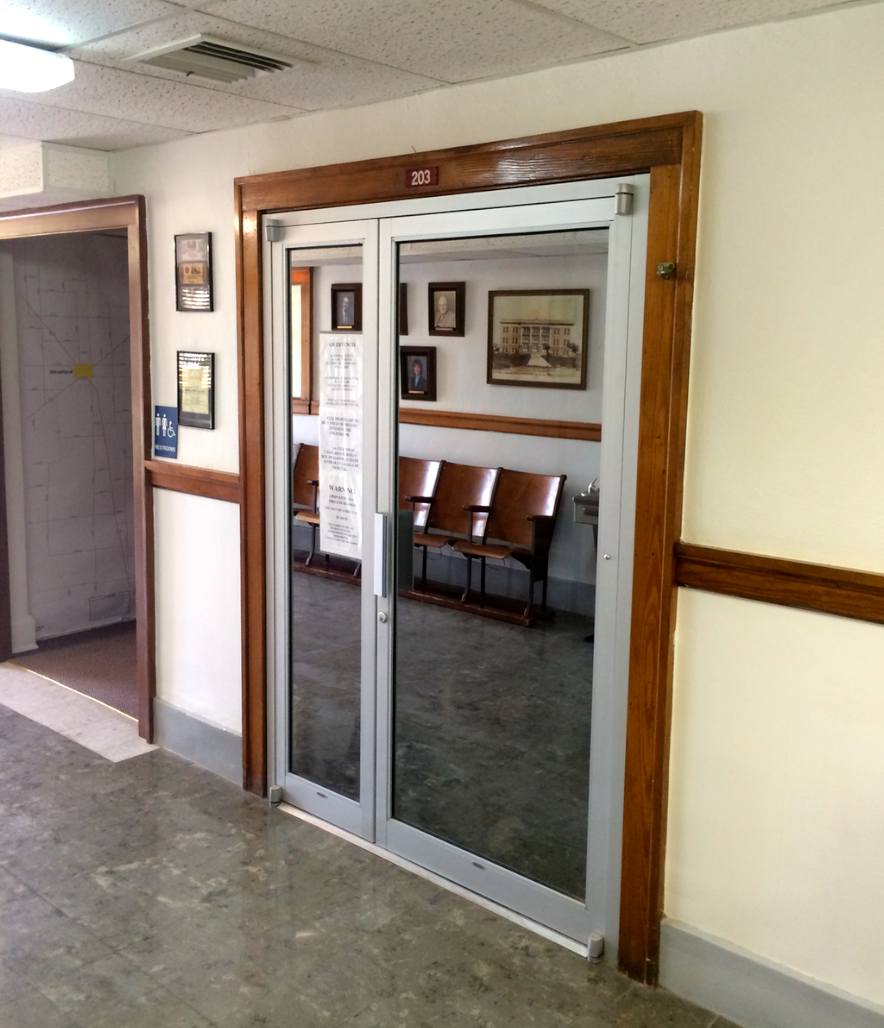 After searching in vain for the courtroom, I finally had the realization that it lies behind this door. There are actually two of these entrances to the courtroom, both made of two-way glass. Yet another unique find only in Sherman County.

Looking through the doors from the inside of the courtroom 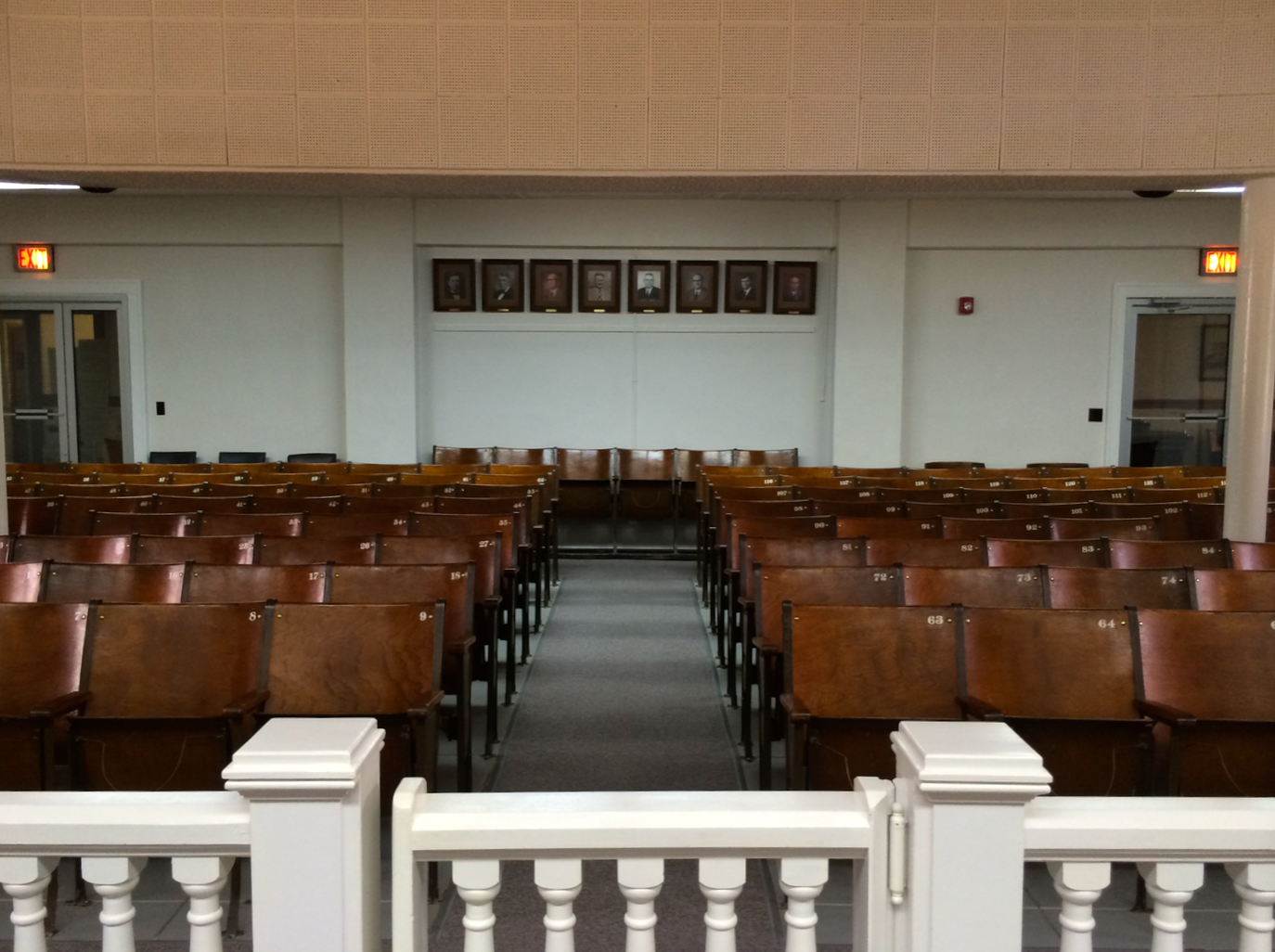 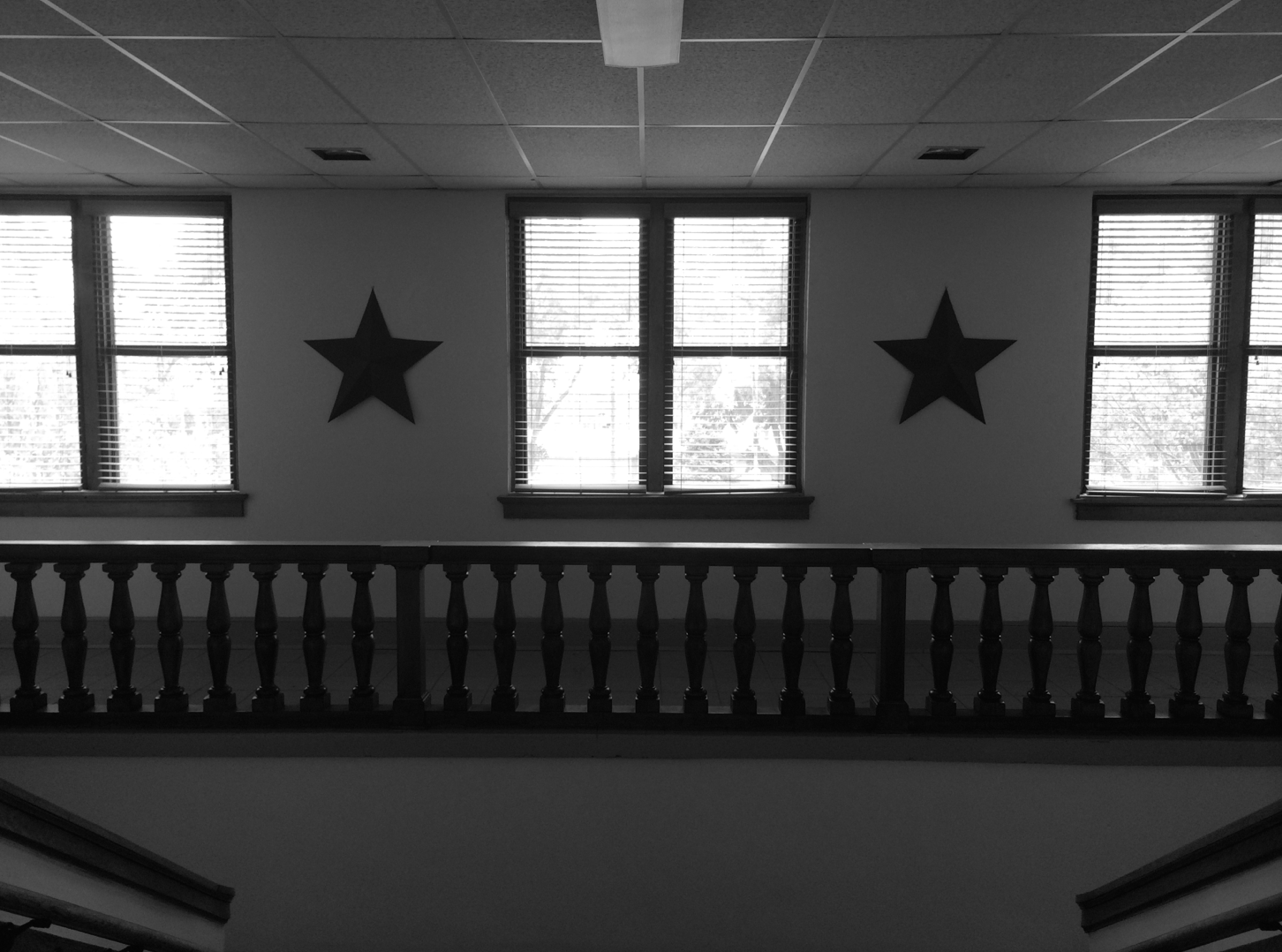 On the second floor

County offices are located in the basement. 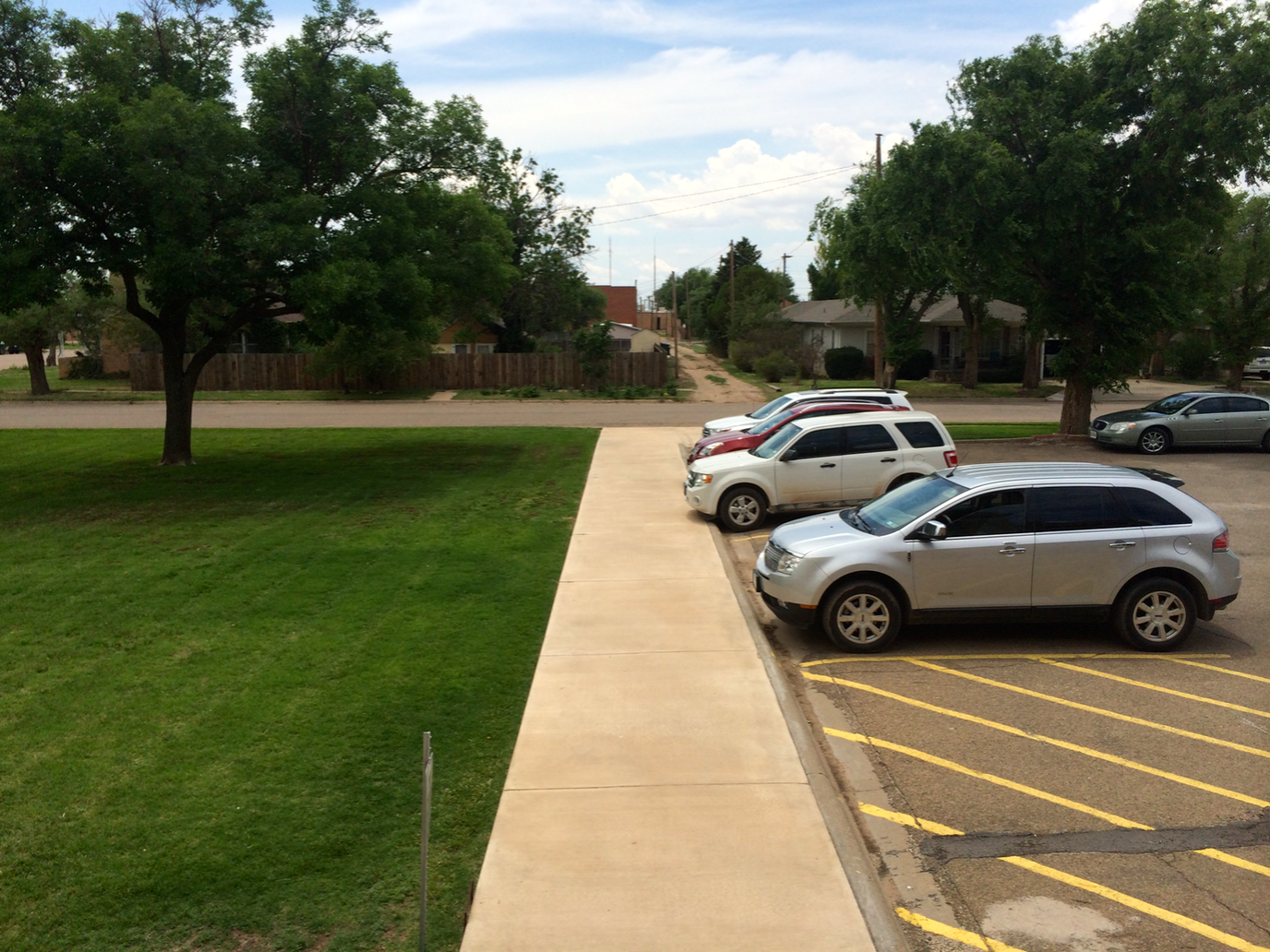 Fulton Street, as seen from the western entrance 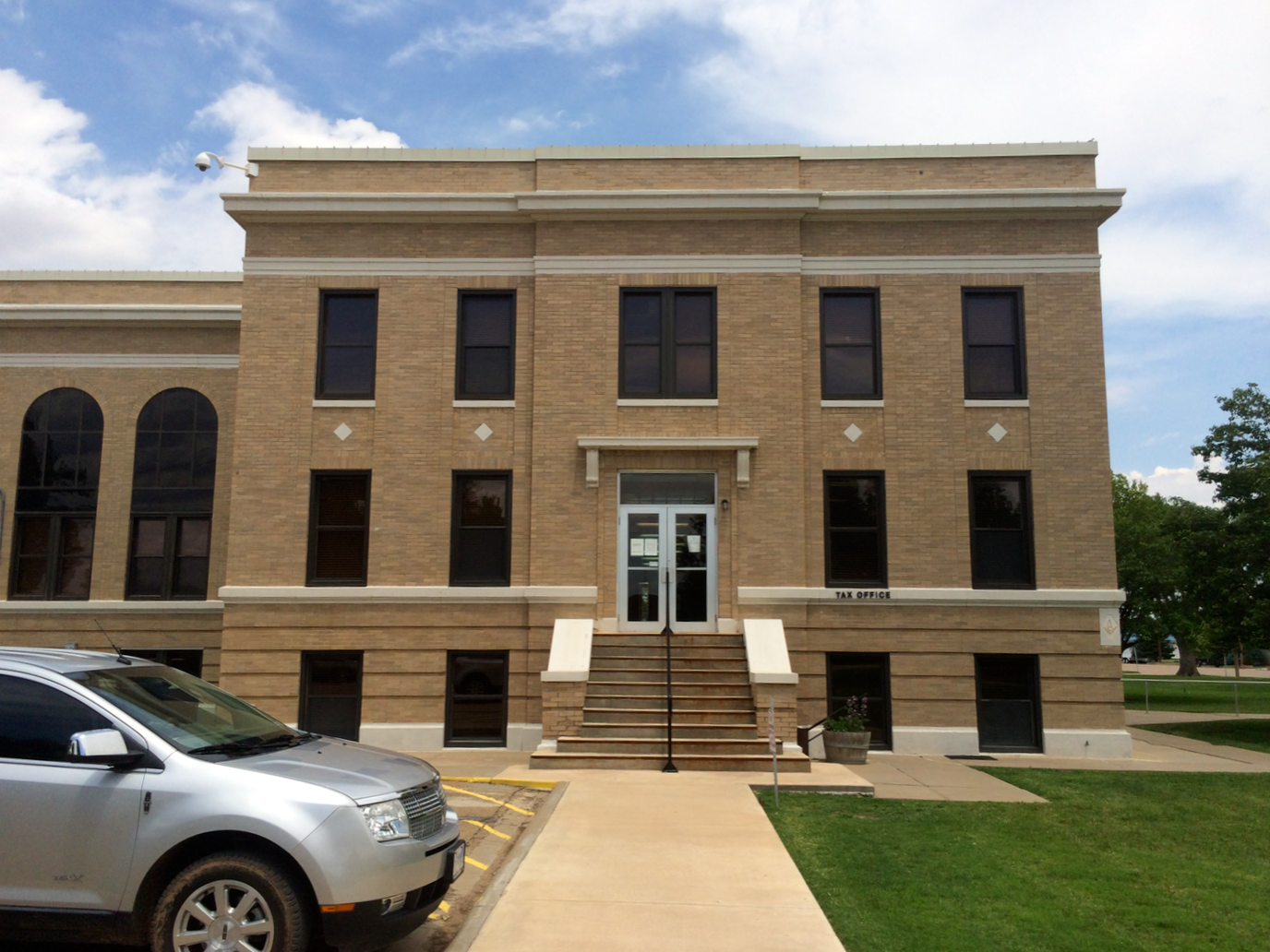 The southwest façade, on Fulton Street 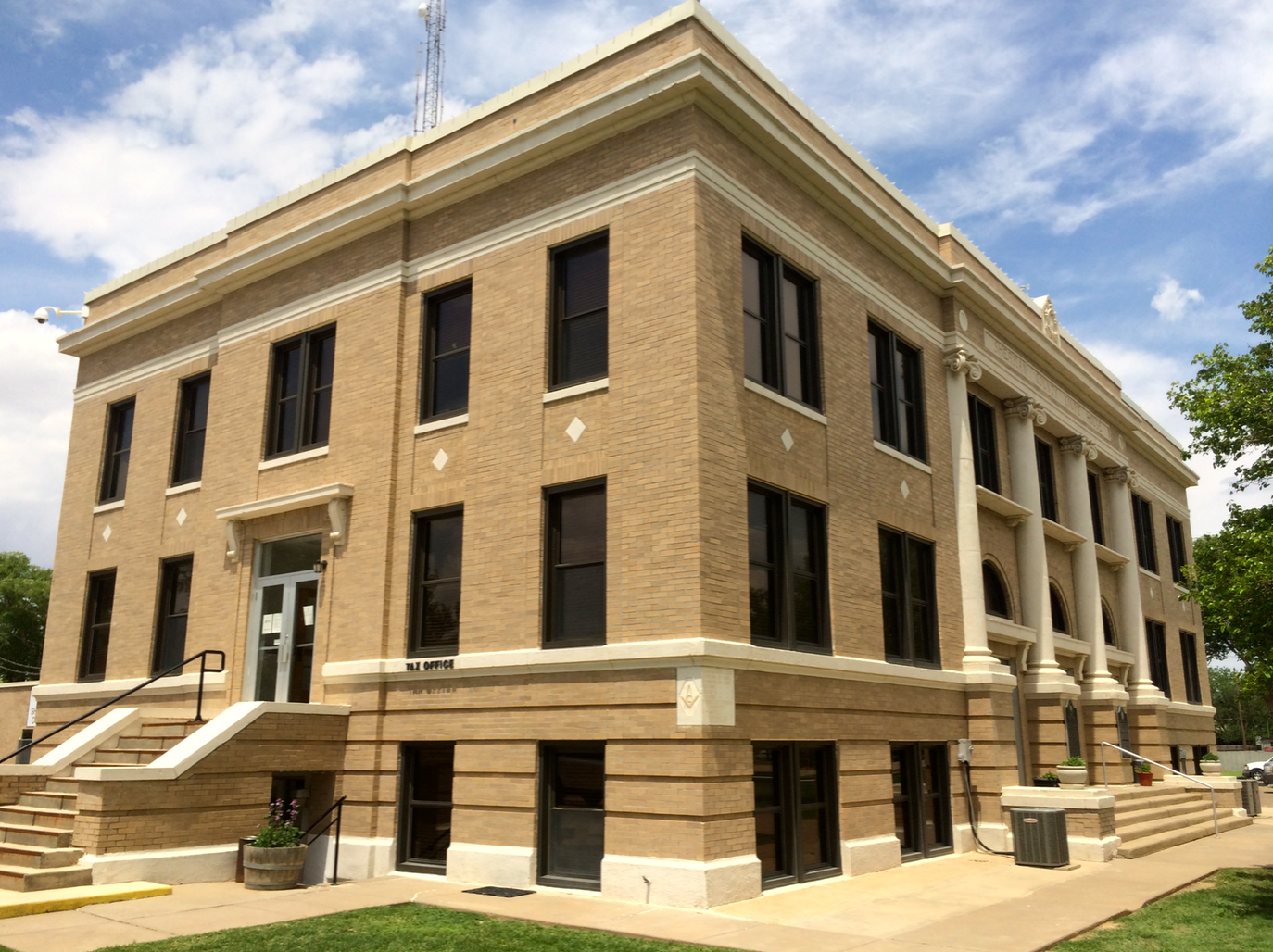 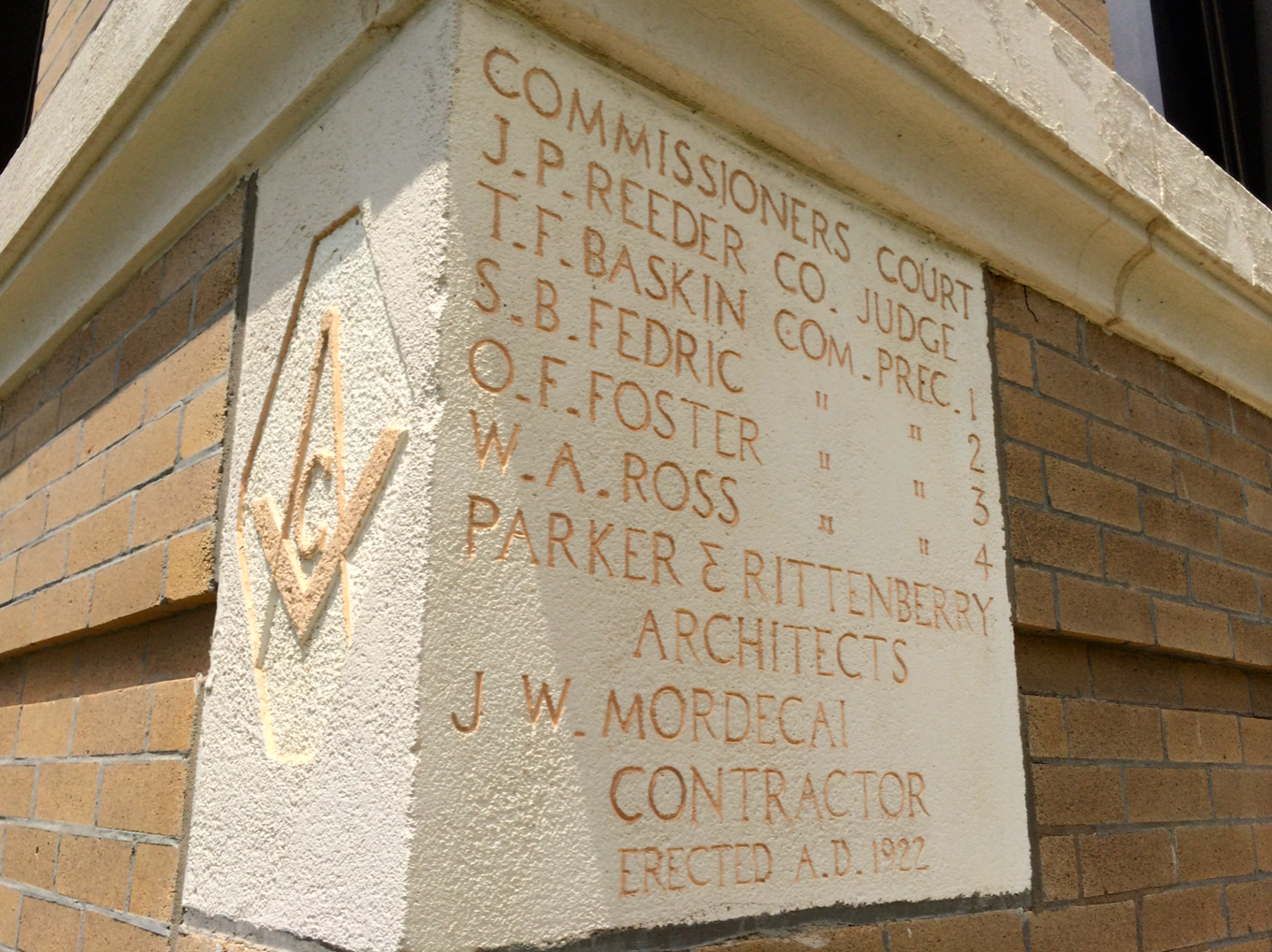 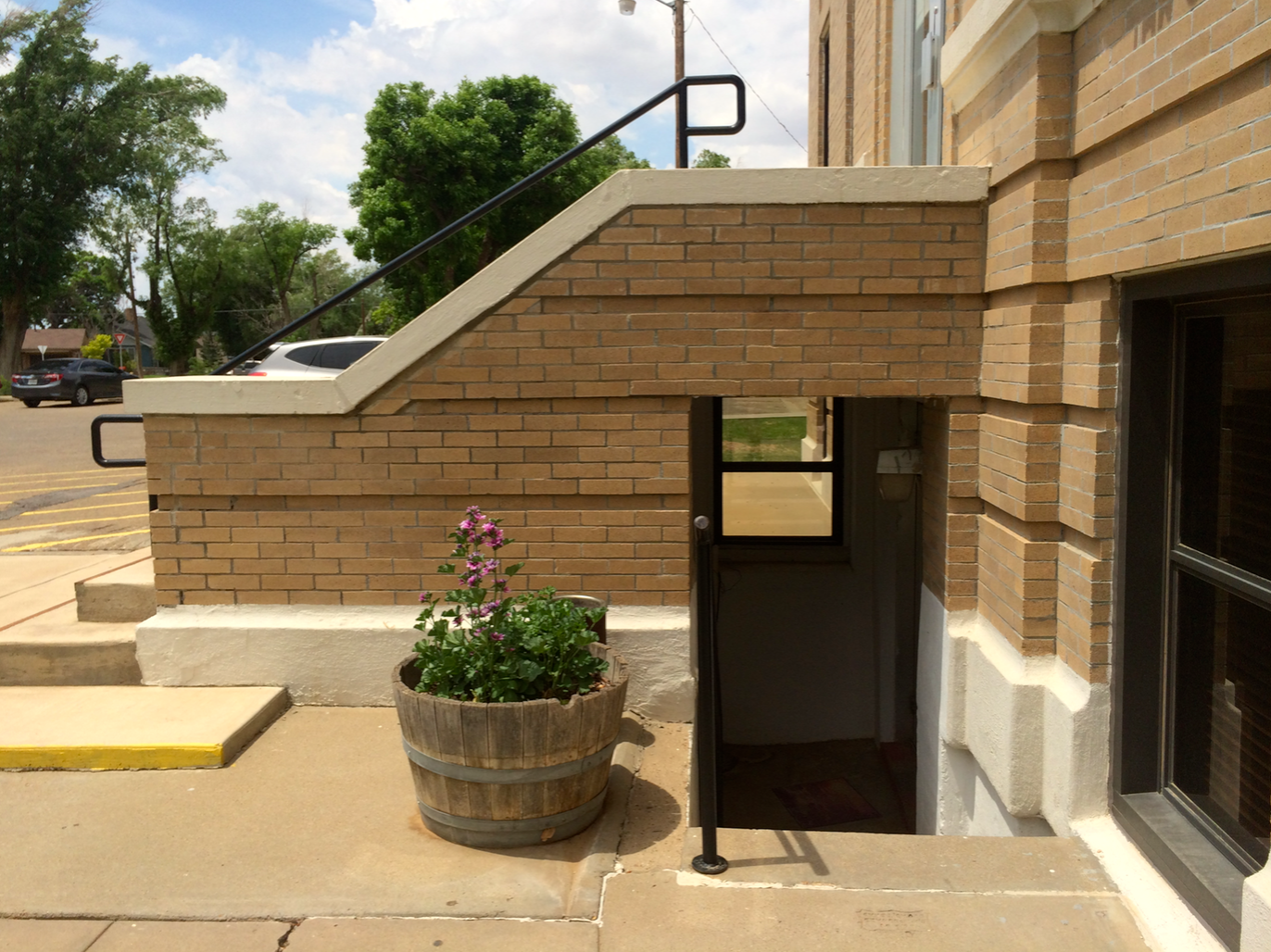 The northwest façade, as seen from 4th Street 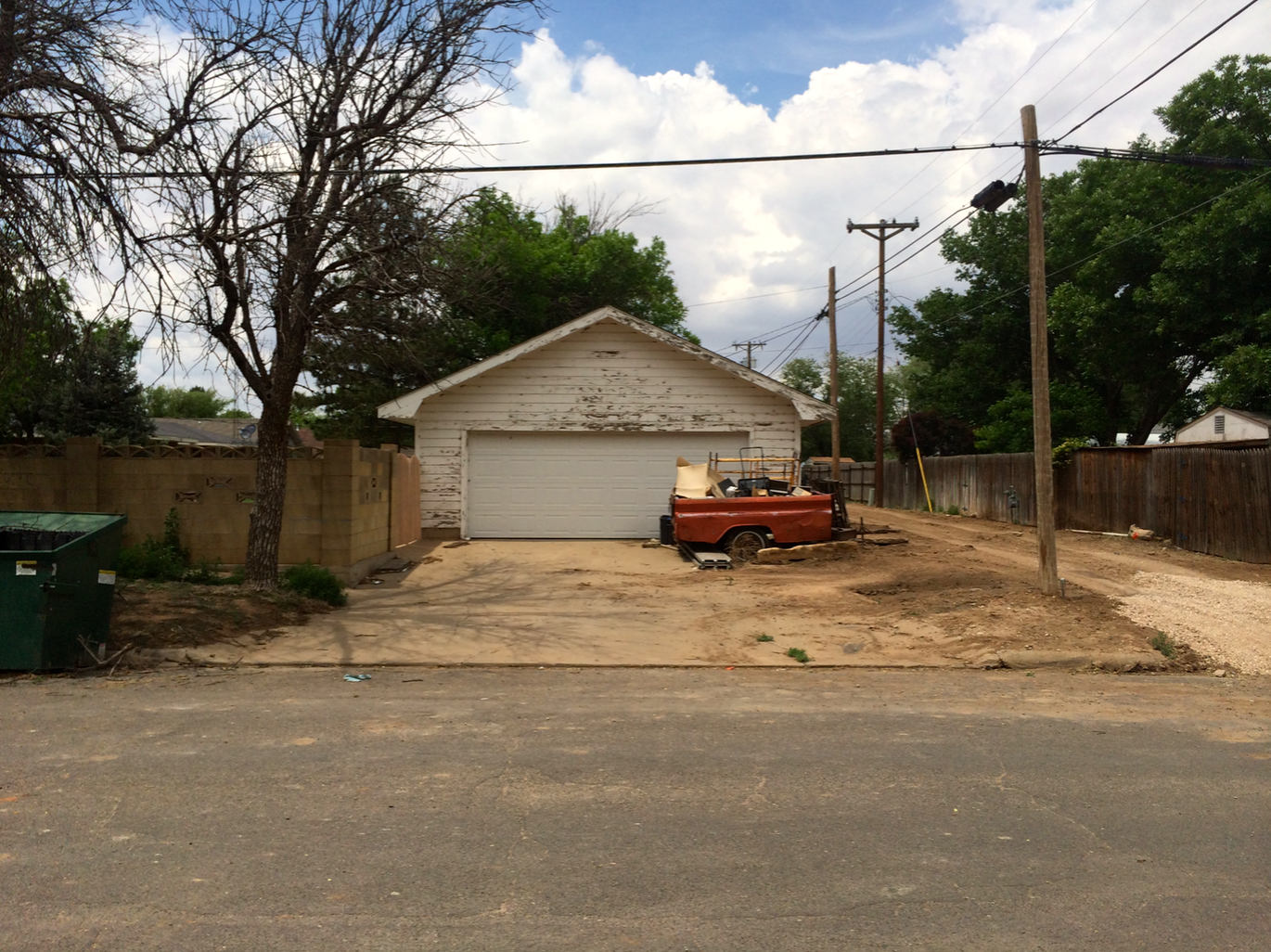 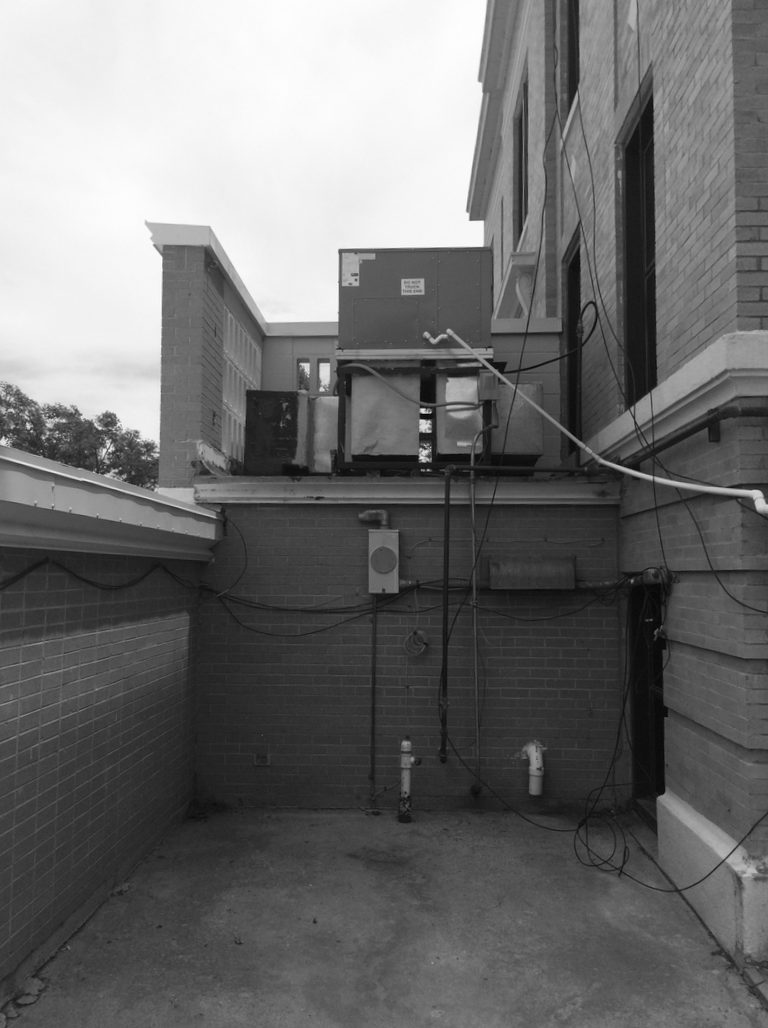 The courthouse’s northwest side contains all its utilities. 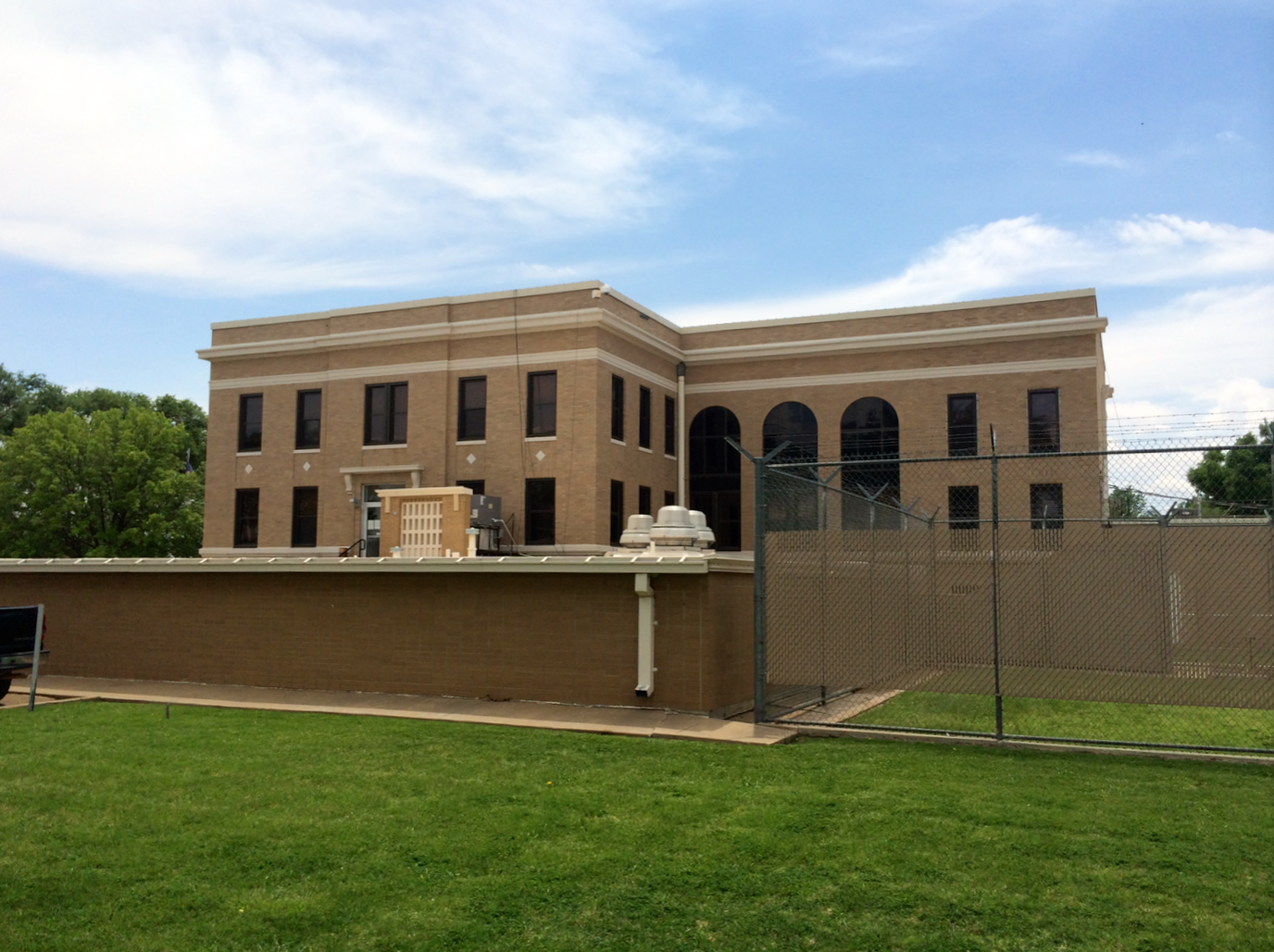 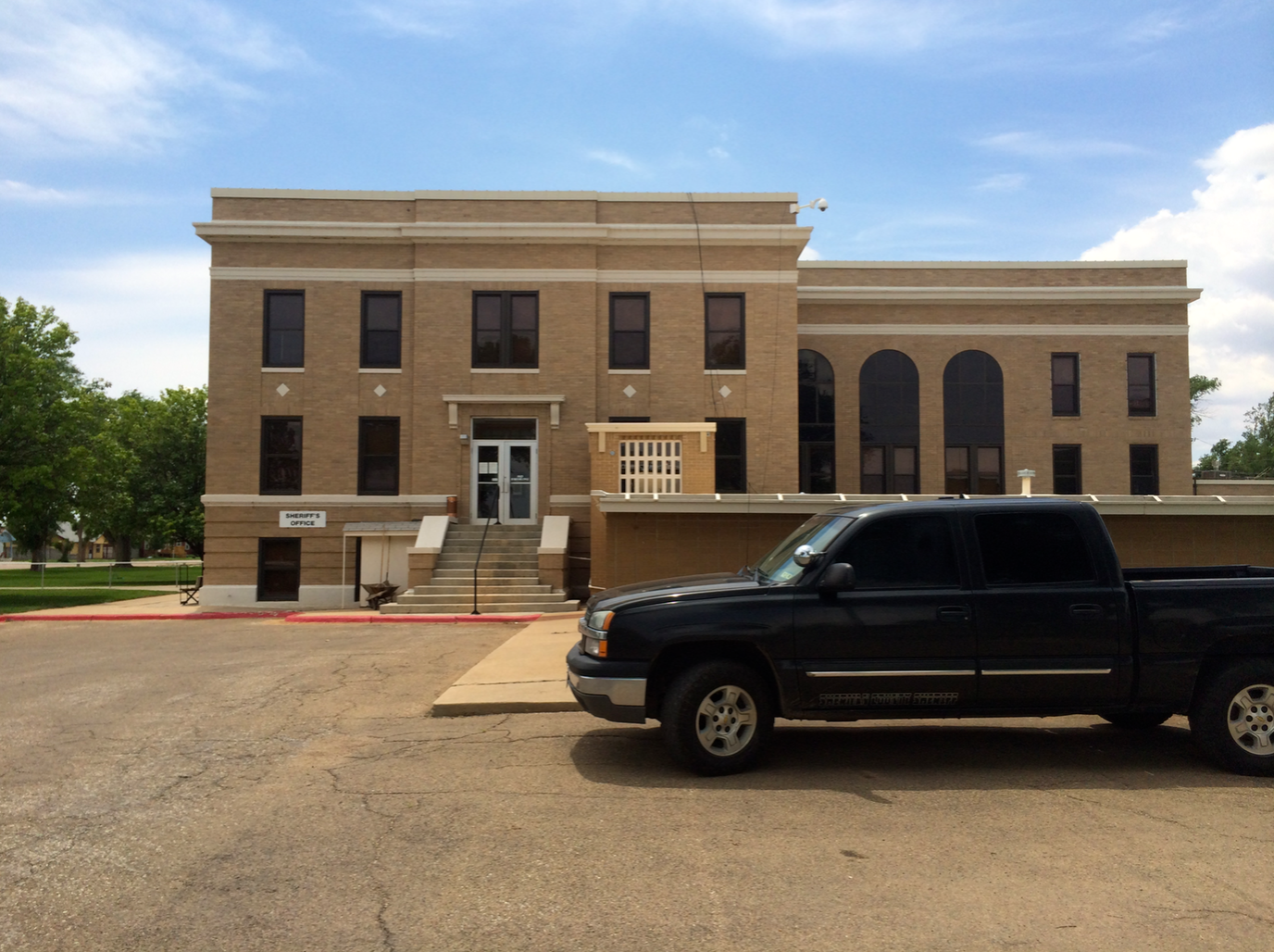 The northeast façade, on Wall Street 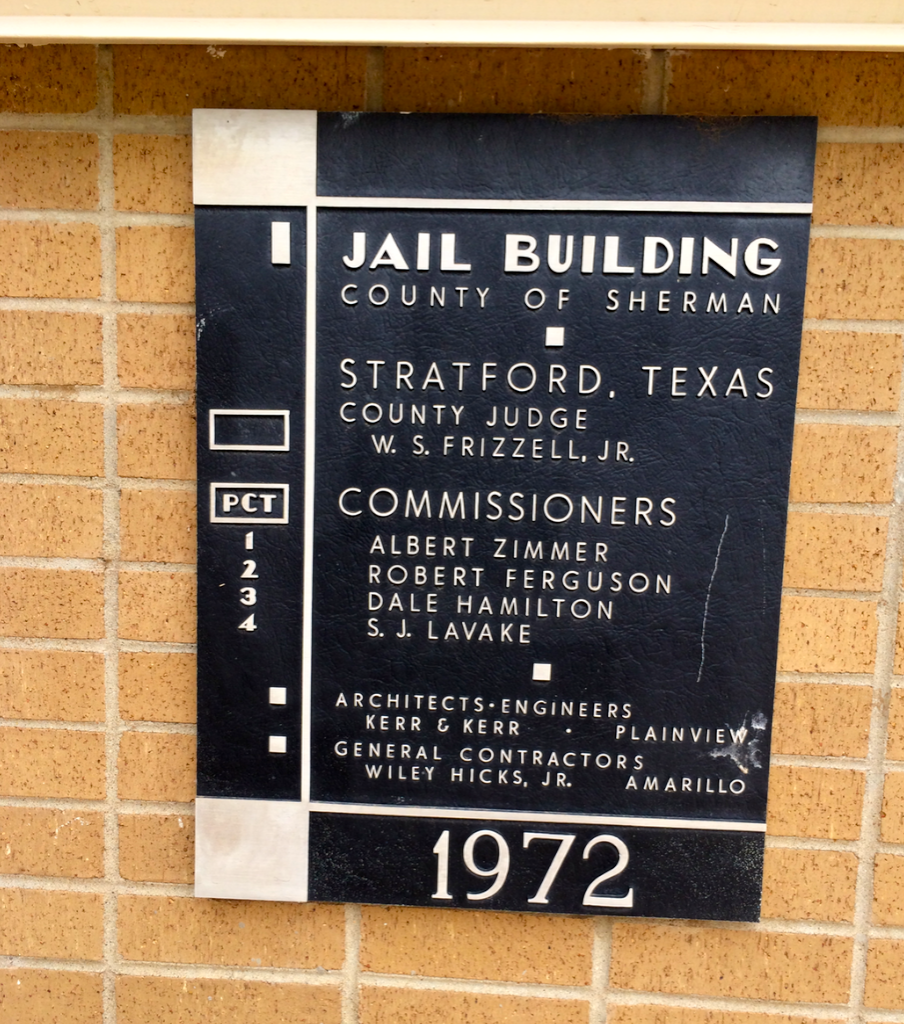 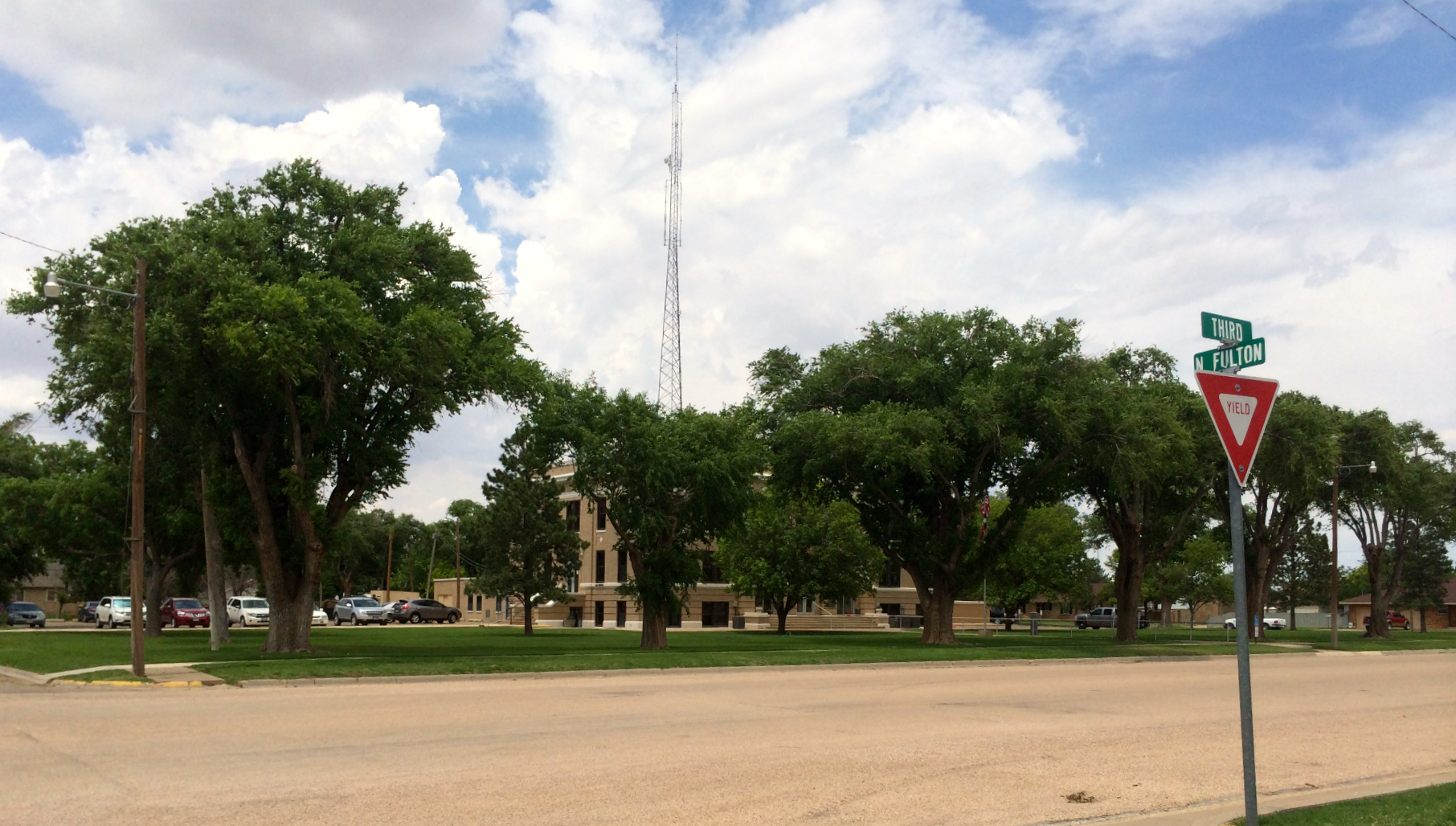