“The county was named for pioneer jurist http://254texascourthouses.com/winward-casino/. It comprises 871 square miles of plains and broken terrain; altitudes range from 2,750 to 3,400 feet above sea level. Hutchinson County receives an average annual rainfall of 19.9 inches. The average minimum temperature is 22° F in January, and the average maximum is 93° in July; the growing season averages 187 days. The Canadian River, fed by several small creeks, angles across the county from southwest to northeast; in the southwest it is dammed to form Lake Meredith.”

“The first Anglo-American expedition to come through the county was led by Stephen H. Long, who mistook the Canadian River for the Red River, in August 1820. Josiah Gregg brought his Santa Fe caravan through in March 1840. About three years later the firm of Bent, St. Vrain and Company sought to tap the Comanche-Kiowa trade by opening a trading post in the Canadian valley on what was subsequently known as Bent’s Creek, now in eastern Hutchinson County.”

“The post, known as Fort Adobe, remained in operation until about 1848, when increased friction with the Indians forced its abandonment. Subsequently its ruins gave the site the name Adobe Walls. The expeditions of Randolph B. Marcy (1849) and Amiel W. Whipple (1853) traveled by Adobe Walls during their surveys of the Canadian valley. In the first battle of Adobe Walls on November 25, 1864, Col. Christopher (Kit) Carson and his detachment of United States Cavalry troops fought their way out of a potential massacre at the hands of some 3,000 hostile Comanches and Kiowas.” 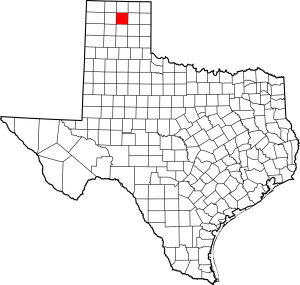 “In the spring of 1874, despite increased threats from disgruntled Indians, merchants and buffalo hunters from Dodge City established a trading post about a mile and a half north of the original ruins. The activities of these hide men led to depredations by Indians at various camps and finally to the second Battle of Adobe Walls, on June 27, 1874. In August, during the ensuing Red River War, a detachment of troops under Lt. Francis (Frank) D. Baldwin fought off a party of fifteen Indians near the beleaguered post, which was abandoned by October and subsequently burned by the hostiles. Nevertheless, the power of the southern Plains tribes was broken, and in 1876 Hutchinson County was established as the area was opened to white settlement.”

“Free-range cattlemen were the first settlers. In November 1876 Thomas Sherman Bugbee started the Quarter Circle T Ranch; his daughter Ruby was the first white child born in Hutchinson County. In 1878 William E. Anderson started his Scissors Ranch at the Adobe Walls site. Together, these ranches later formed the nucleus of the Turkey Track Ranch. The ranges of the LX Ranch and the Diamond F extended into the southern part of the county. For the next four decades ranching dominated the county’s economy.”

“After its boundaries were established, Hutchinson County was attached for administrative purposes to Wheeler County and then to Carson County. In the spring of 1901 a movement was begun for its organization. Elections were held on April 25, and on May 13 the county was officially organized with the riverside town of Plemons as its seat of government. W. H. Ingarton was elected county judge, and William (Billy) Dixon, the Adobe Walls hero who had operated the county’s first post office on the Turkey Track, was the first sheriff.”

“Hutchinson County slumbered as a sparsely populated ranching and agricultural center until the discovery of the vast Panhandle oilfield in the early 1920s. Such ranchers as James M. Sanford, J. A. Whittenburg, and John F. Weatherly cashed in on the resultant boom; many townsites and oil camps such as Isom, Sanford, Fritch, Phillips, Stinnett, Signal Hill, Electric City, and Dial sprang up almost overnight as petroleum-related industries moved in and independent oil producers struck it rich. The largest and rowdiest of these boom towns was laid out west of Dixon Creek in 1926 and named for its founder, A. P. (Ace) Borger.”

“With the boom, railroads finally came to the county. In 1924 the Chicago, Rock Island and Gulf Railway built northeast from Amarillo across the western part of the county, and in 1926 the Panhandle and Santa Fe extended a spur line from Panhandle in Carson County to Borger and Phillips. After a special election on September 18, 1926, Stinnett took over as county seat, thus causing the demise of Plemons. The population mushroomed from 721 in 1920 to 14,848 in 1930 as a result of the oil boom.”

“The onslaught of the Great Depression, with the accompanying black dusters of the Dust Bowl, ended the boom, devastated farms, and caused petroleum prices to drop; by 1930 the census reported 452 unemployed in the county. Nevertheless, Hutchinson County as a whole experienced a mixture of prosperity and recession as many “Okie” migrants found jobs in the oilfields and plants.”

“World War II saw a resurgence in the carbon black industry and the establishment at Bunavista, west of Borger, of a carbon black plant that in 1943 produced 361,000,000 pounds. The county’s population rose to 31,580 by 1950 and 34,419 by 1960. In 1963 the Magic Plains Industrial Foundation was formed to purchase land and promote new industrial growth for the Borger area. Tourism and recreation were enhanced in 1965 with the completion of Sanford Dam, which impounded Lake Meredith on the Canadian River.”

“Borger (2000 population, 14,302) remains the county’s largest town and chief commercial and cultural center, and Stinnett (1,936) is the county seat. Other communities include Fritch (2,235 in Hutchinson County, partly in Moore County), Sanford (203), Phillips, Dial, and Pringle.”

Hutchinson County was formally and legally organized on May 13, 1901 with the city of Plemons designated as the county seat. There, a courthouse was constructed by H.W. Wright and built by an E.E. Ackers. Historical documents indicate it was a one-story, wooden frame building and nothing more. A 1926 election election moved the county seat to Stinnett, which subsequently destroyed Plemons and rendered the courthouse there defunct.

Before any proper courthouse could be built in the new seat, court was held in an office building. Hutchinson County citizens only needed to wait a year, however, before a local oil boom prompted the immediate construction of something much more spacious. Amarillo architect W.C. Townes provided the designs and local architectural firm C.S. Lambie & Co. set to work to bring it to life. Toady, the massive building: “features brick construction with cut-stone ornamentation, a 3-bay primary facade with grand entry bay, raised basement with end entries, metal sash windows and second floor window with round-arch stone lintels. Friezes at the east and west entrances of the courthouse depict the petroleum, farm and ranch, and cattle industries, historically the three principal commercial enterprises in the area.”  - Hutchinson County Courthouse Historical Marker

The huge edifice is the definition of imposing. It sits on a hill above TX-136, casting its impressive gaze over the highway. This is the southwest corner. 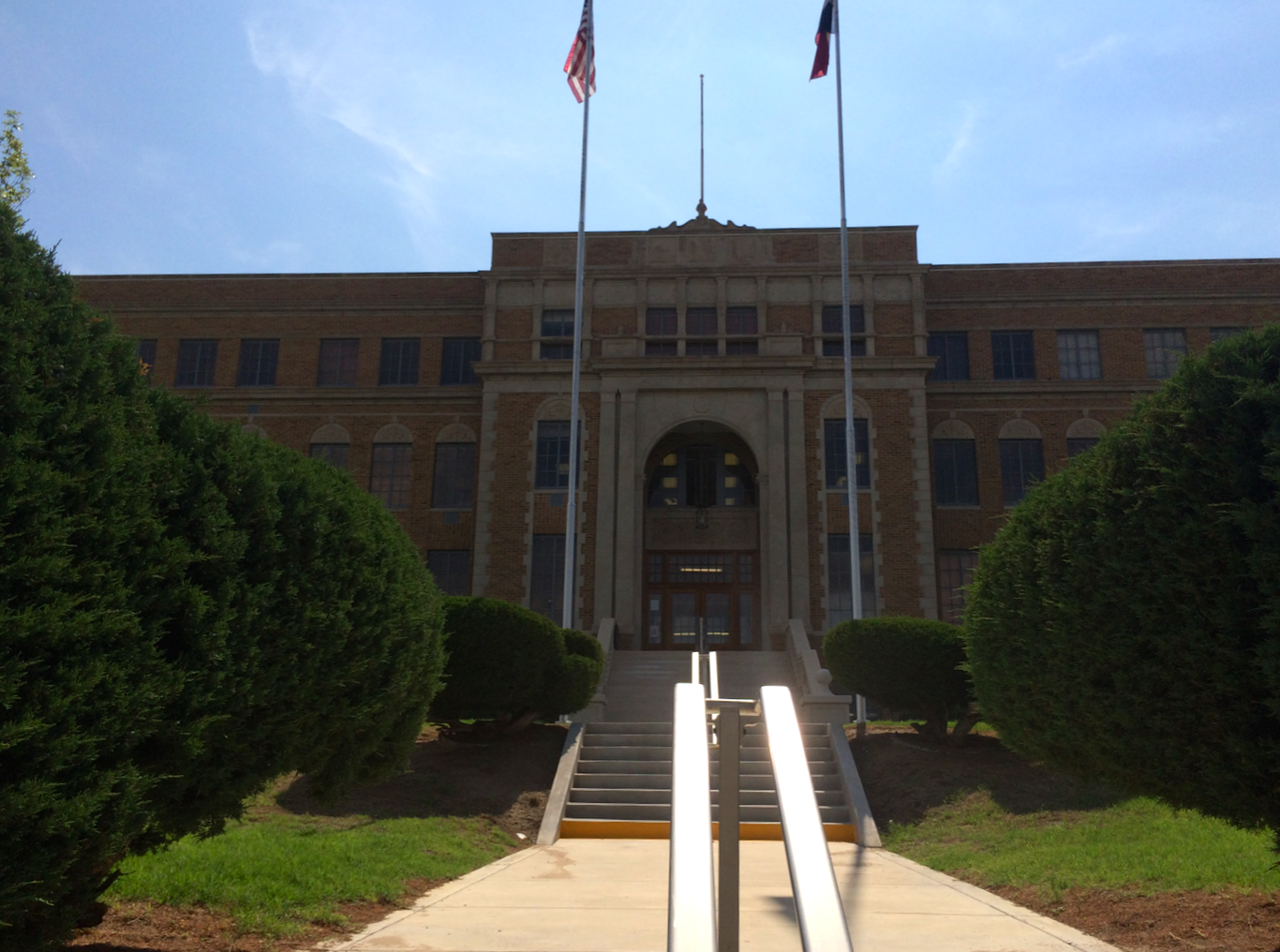 A series of steps ascend the hill to the western (and main) entrance. 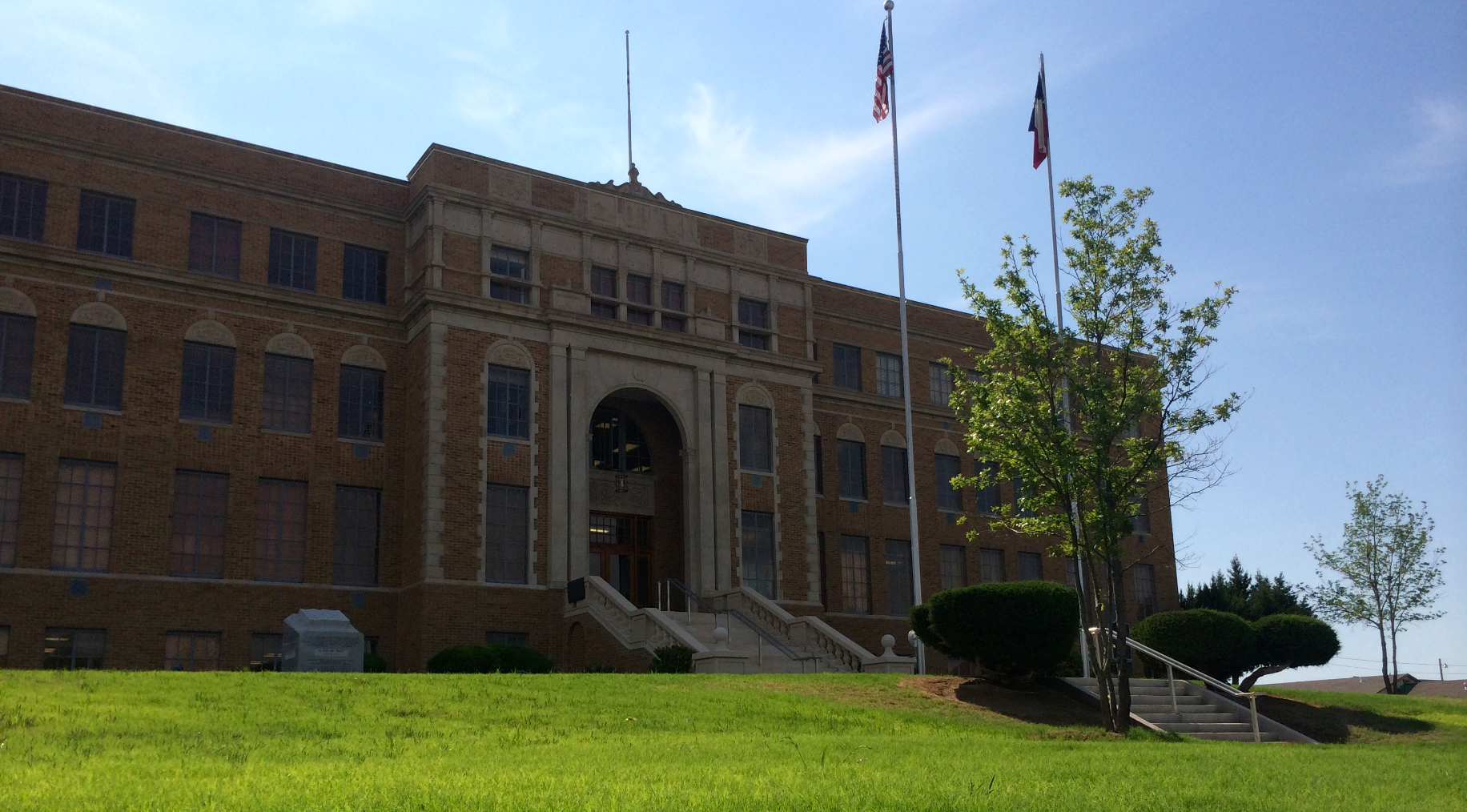 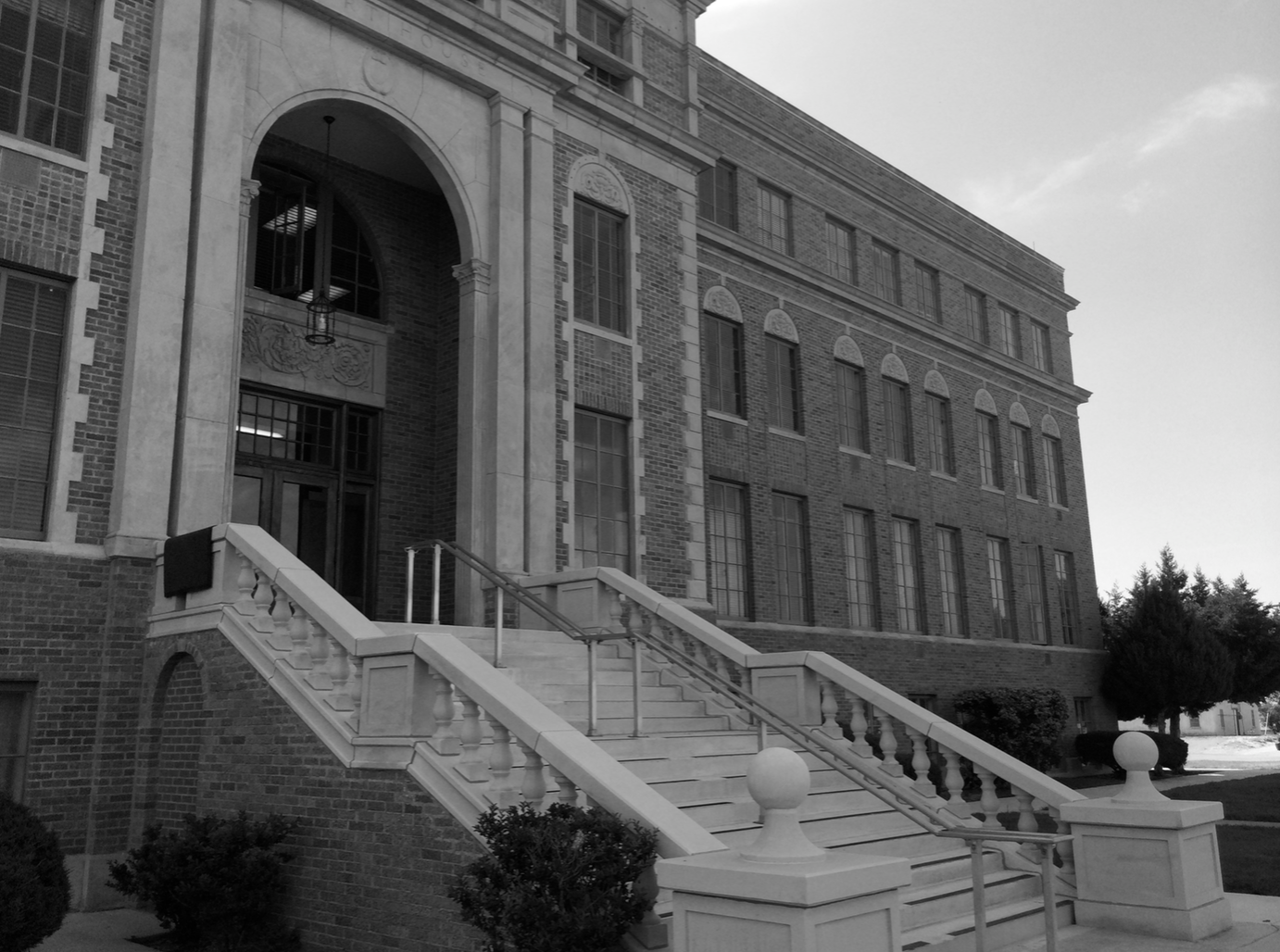 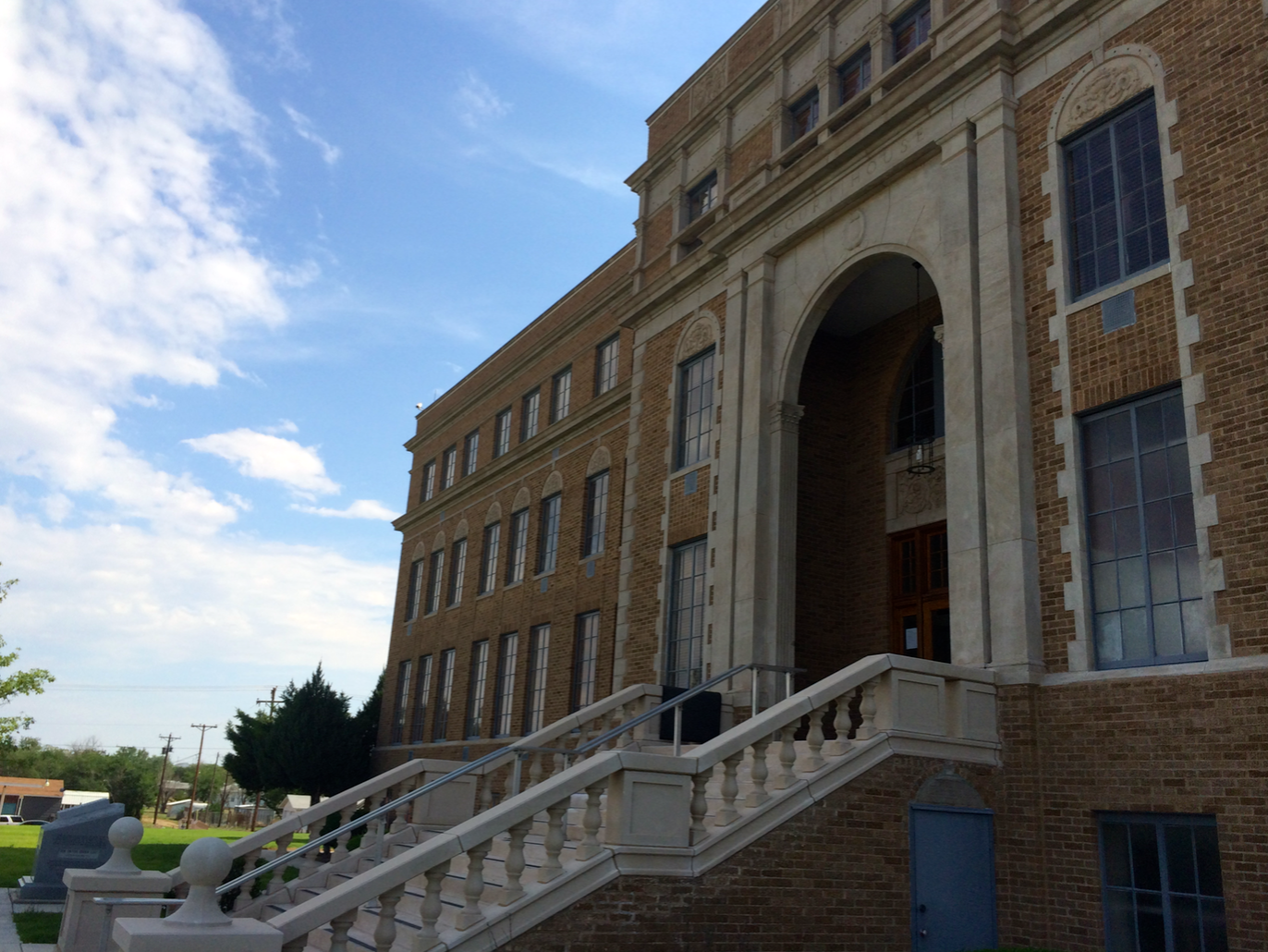 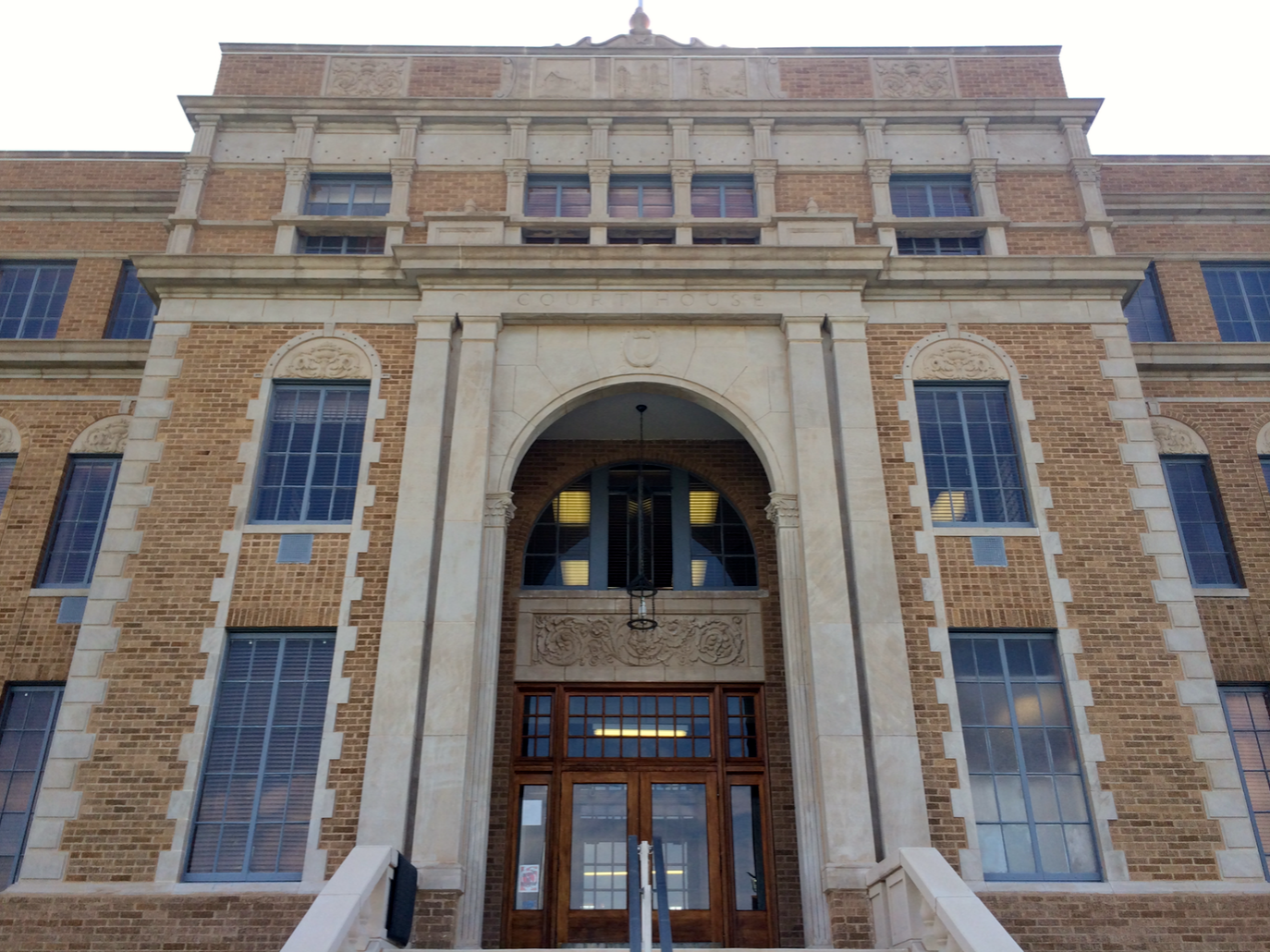 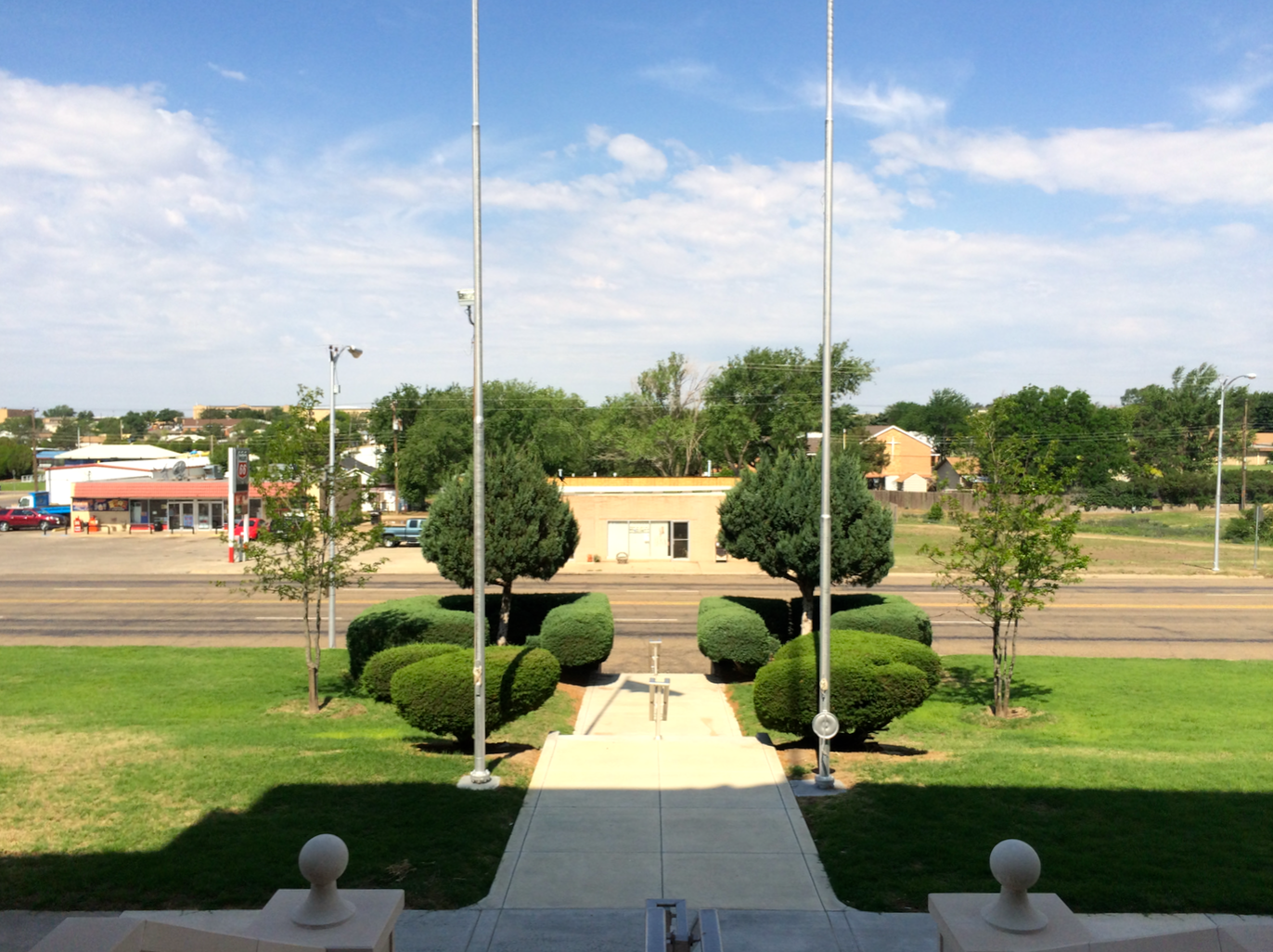 Main Street / TX-136, as seen from the western steps 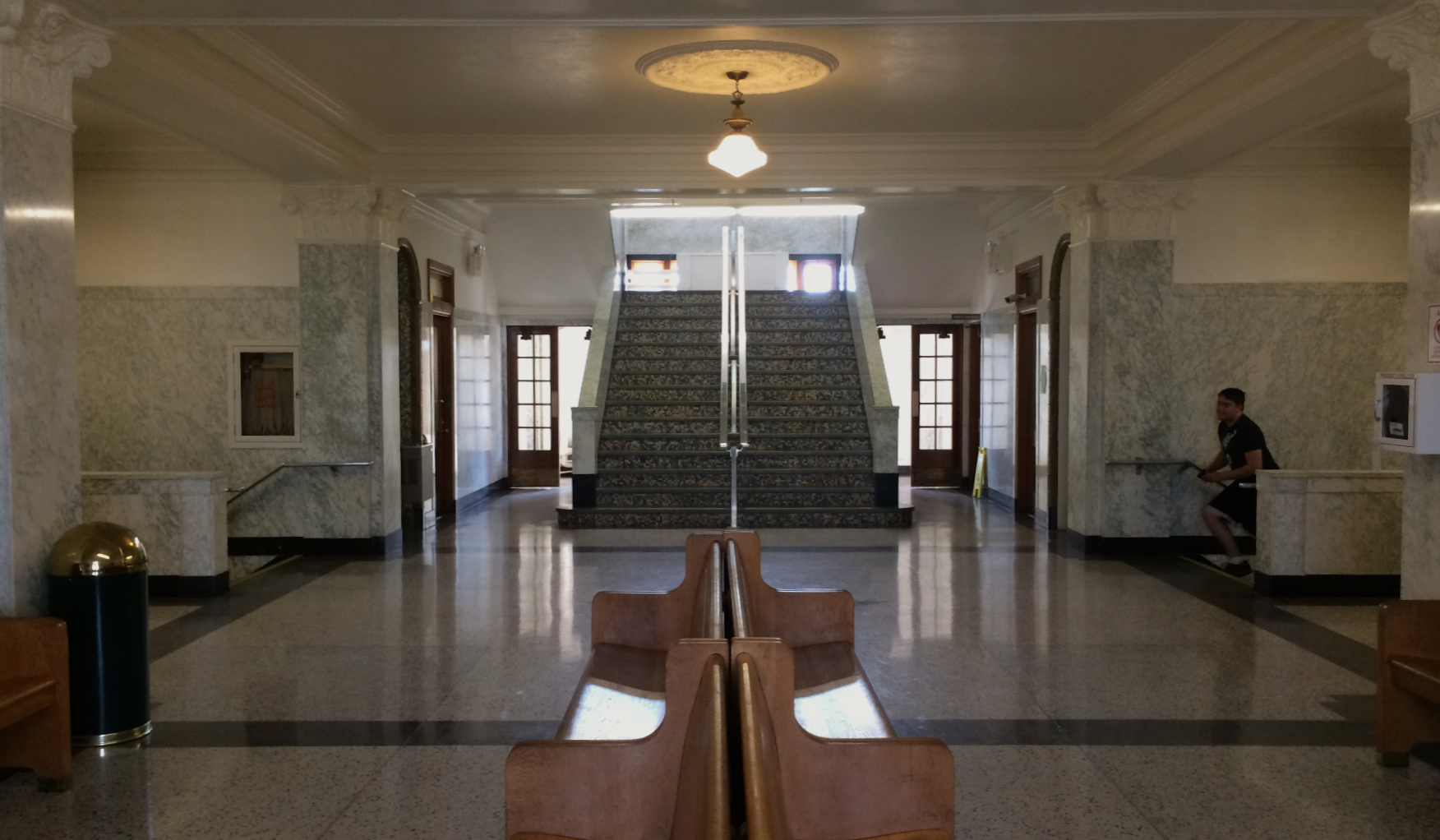 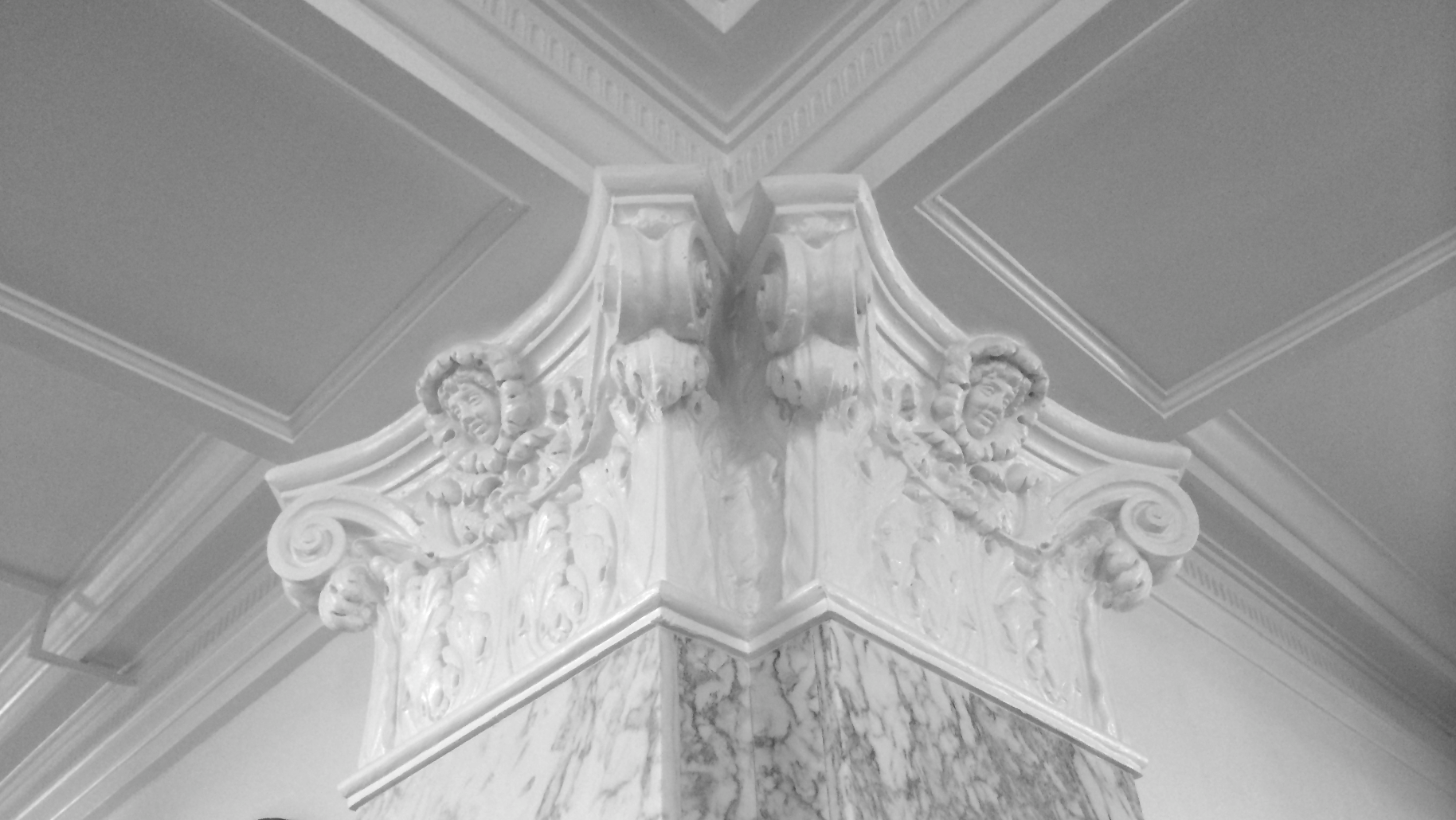 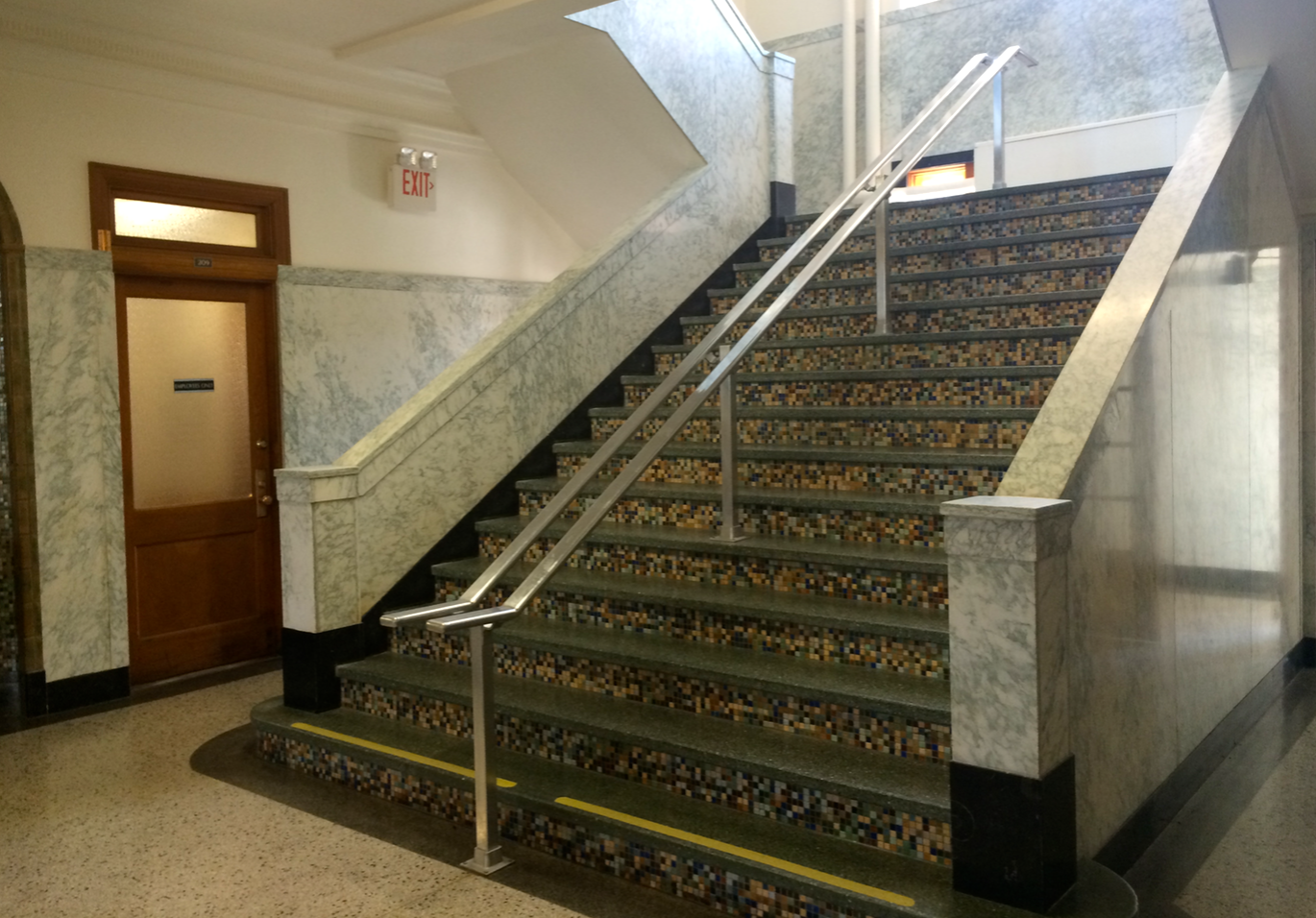 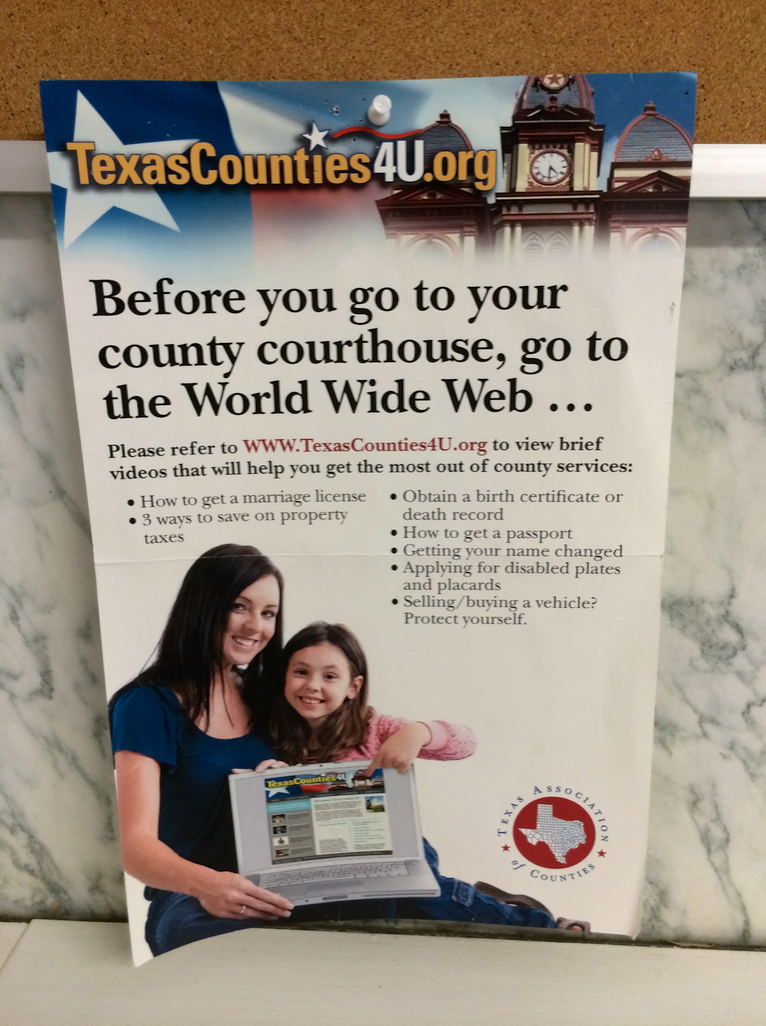 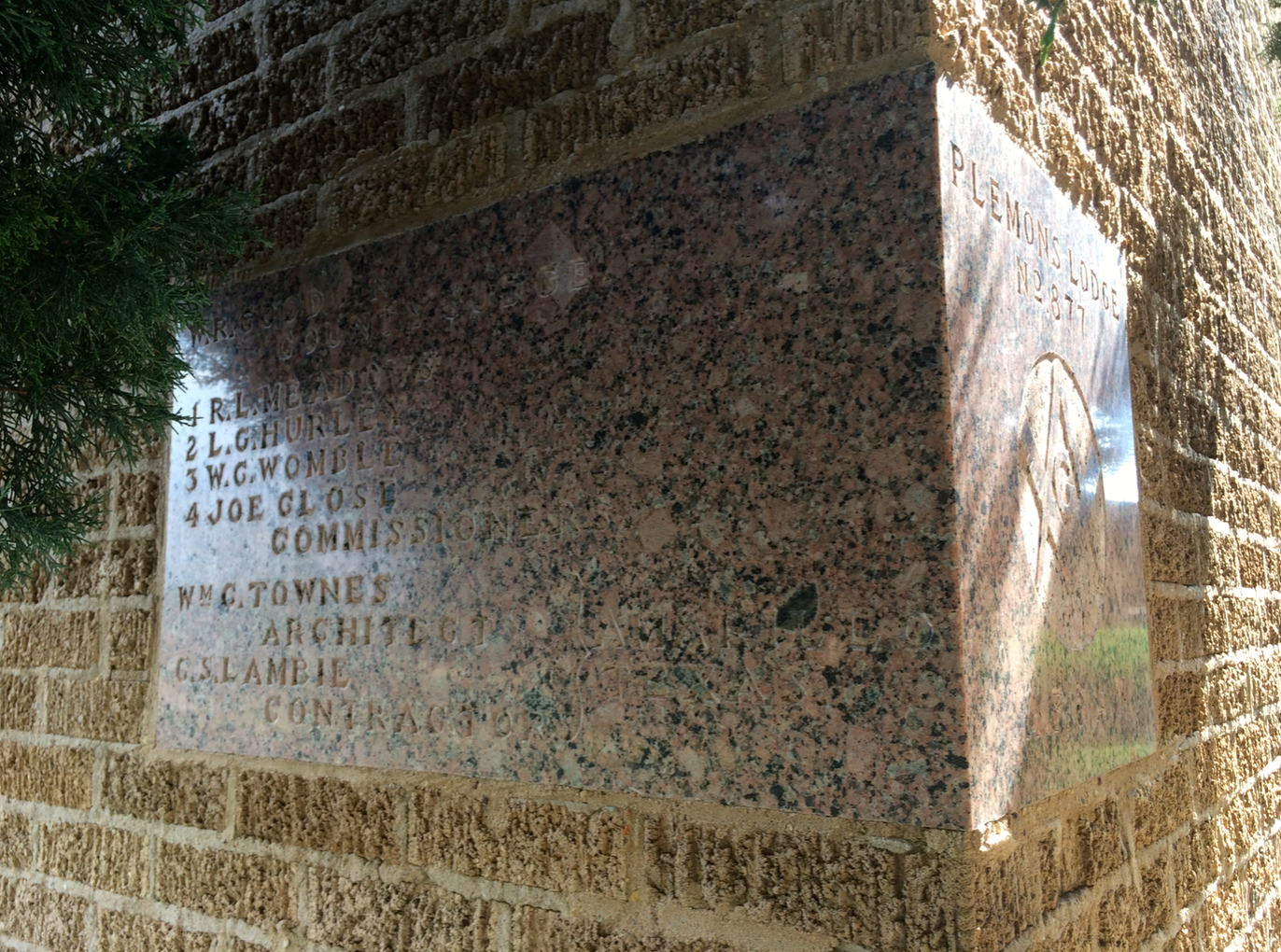 The cornerstone is on the southwest corner. You’ll notice the Plemons Masonic Lodge laid it. 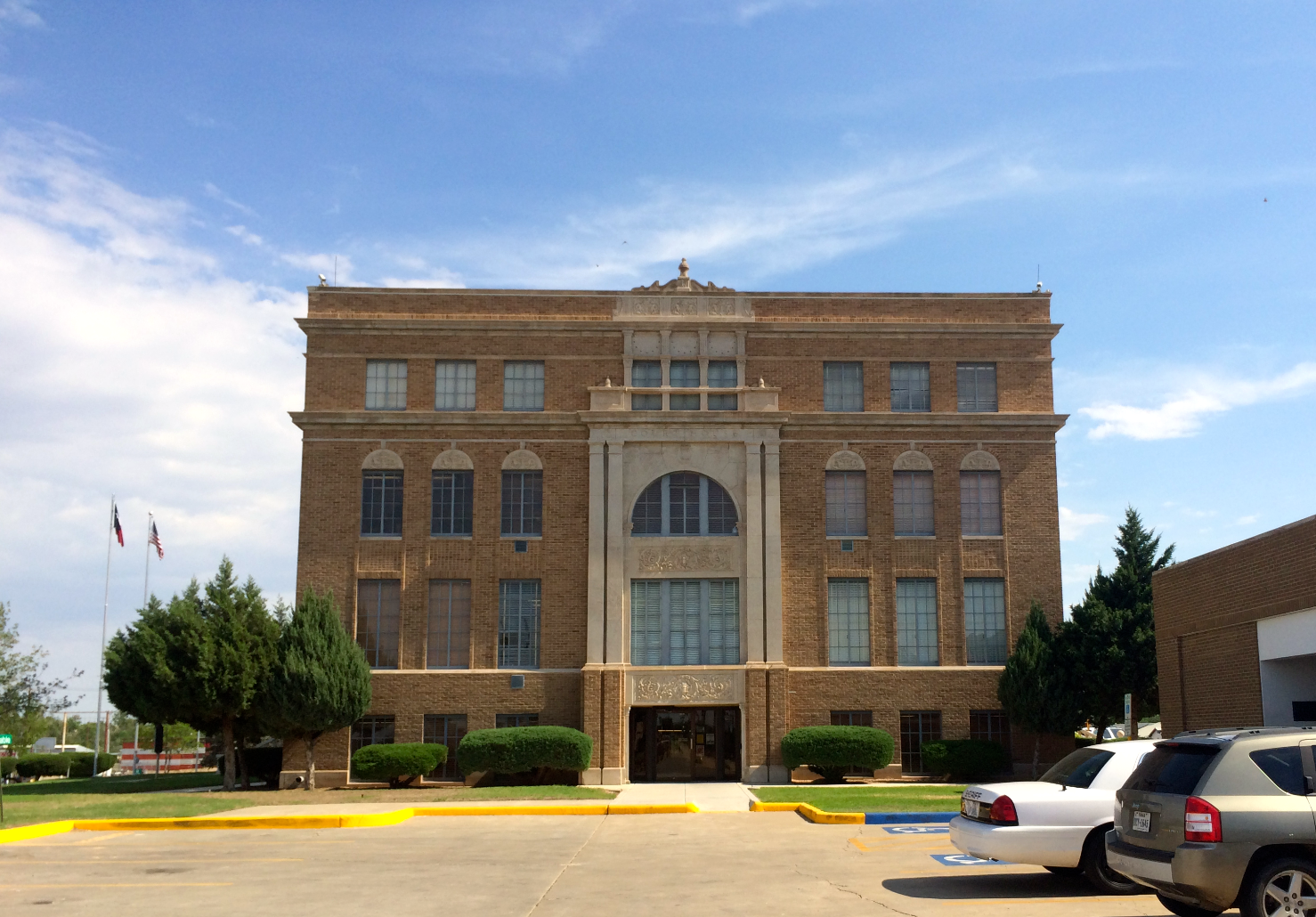 The southern façade, on 6th Street

The eastern façade, on Morse Avenue 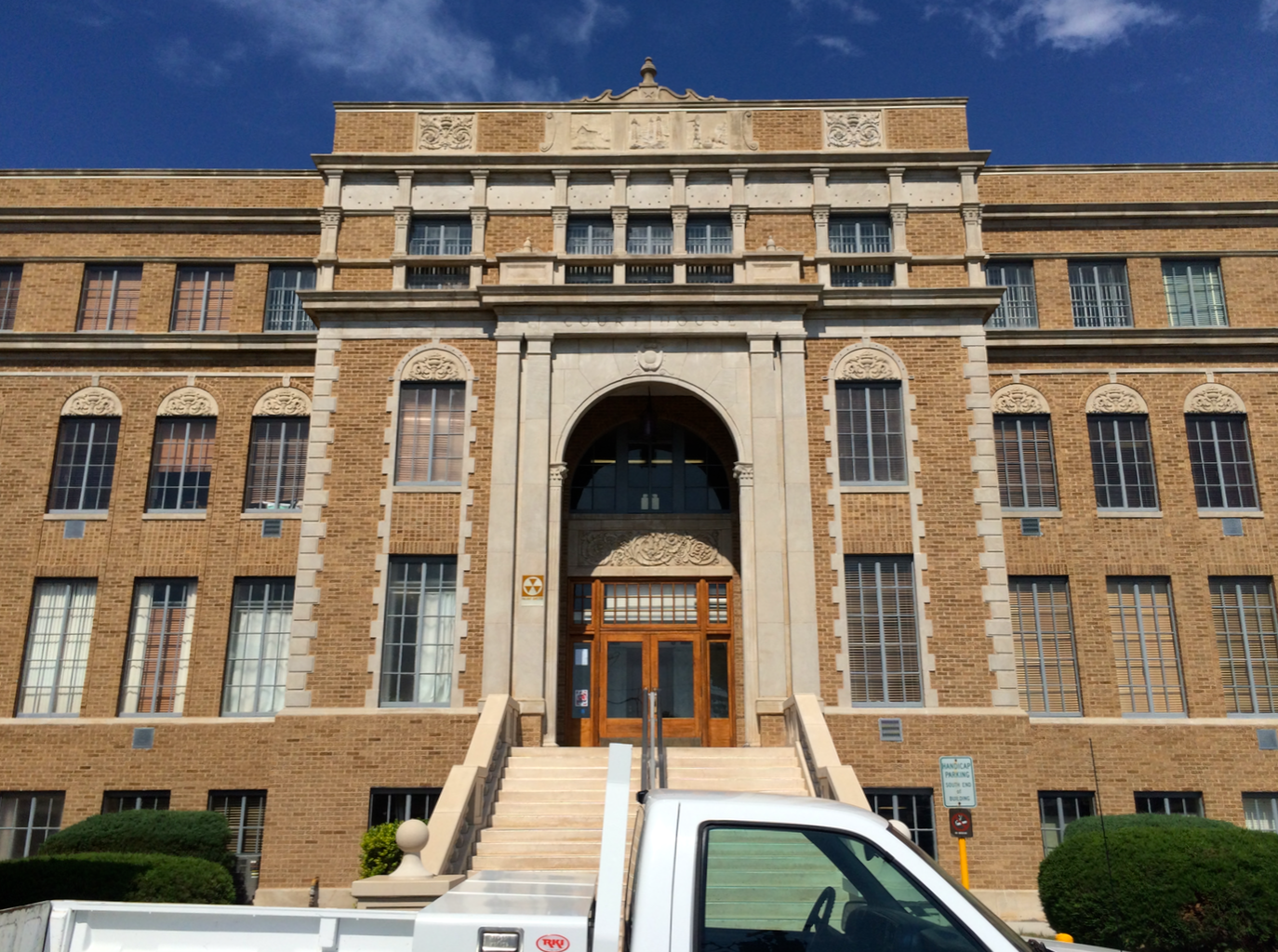 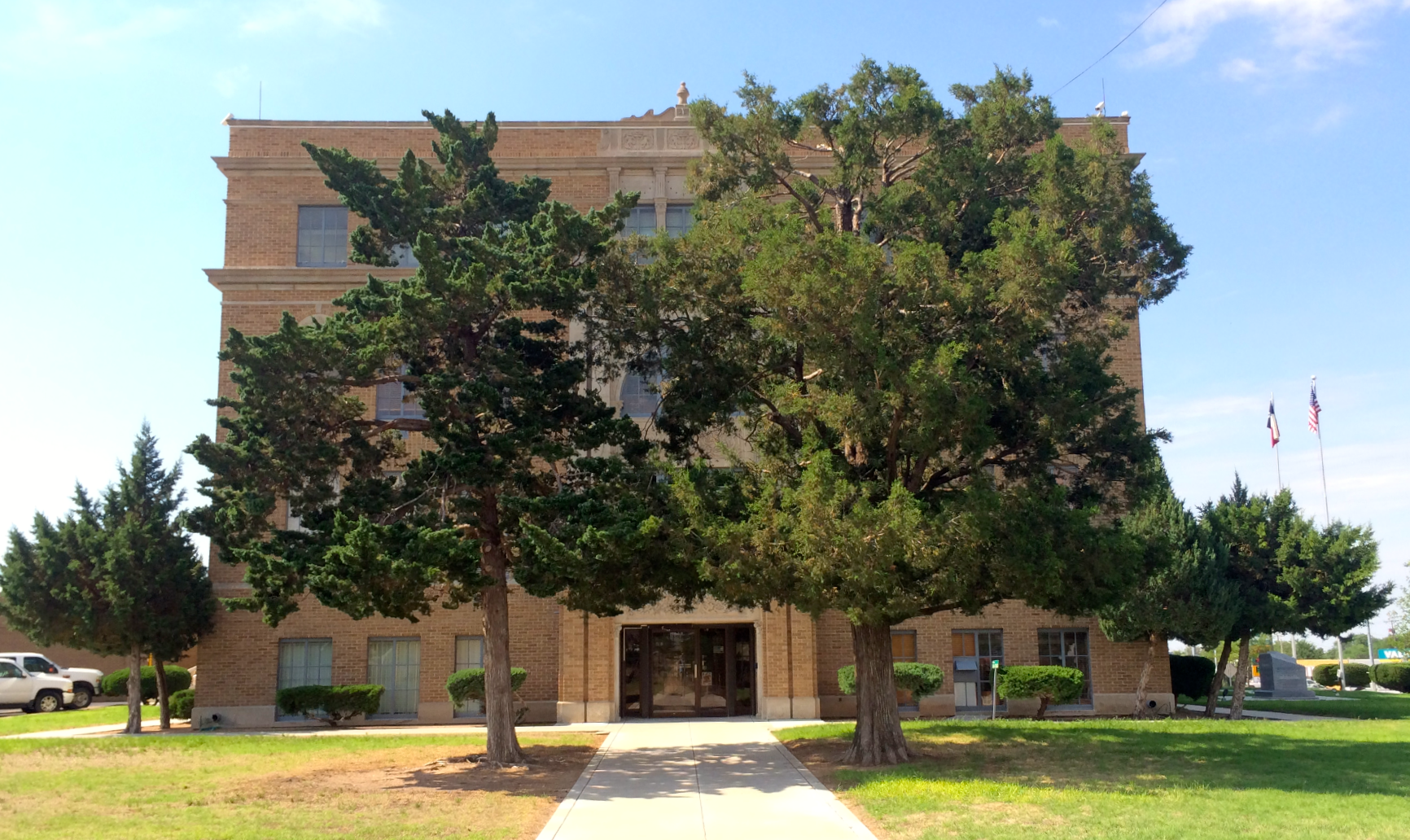 The northern façade is partially hidden behind two trees. It faces 5th Street. 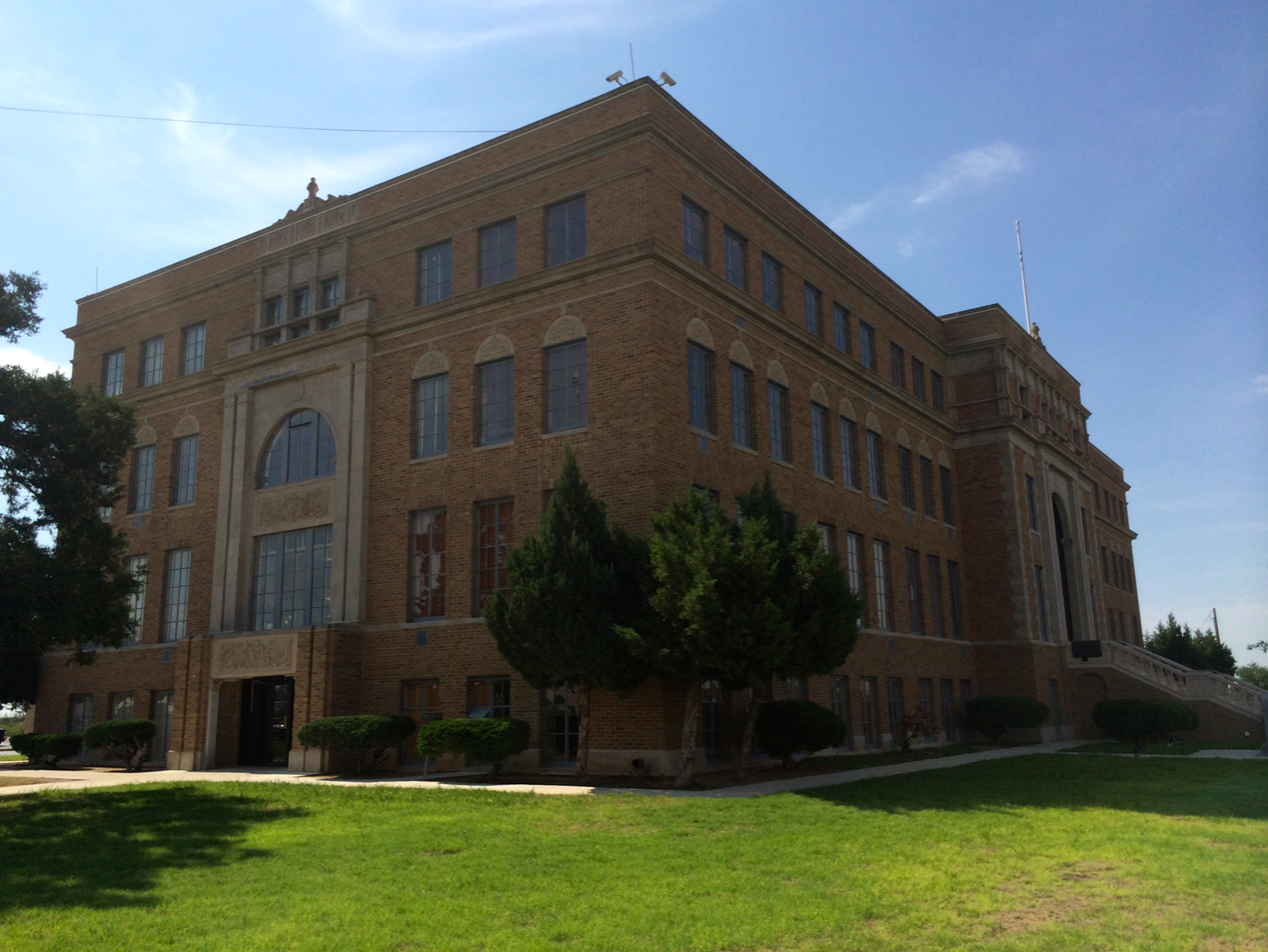 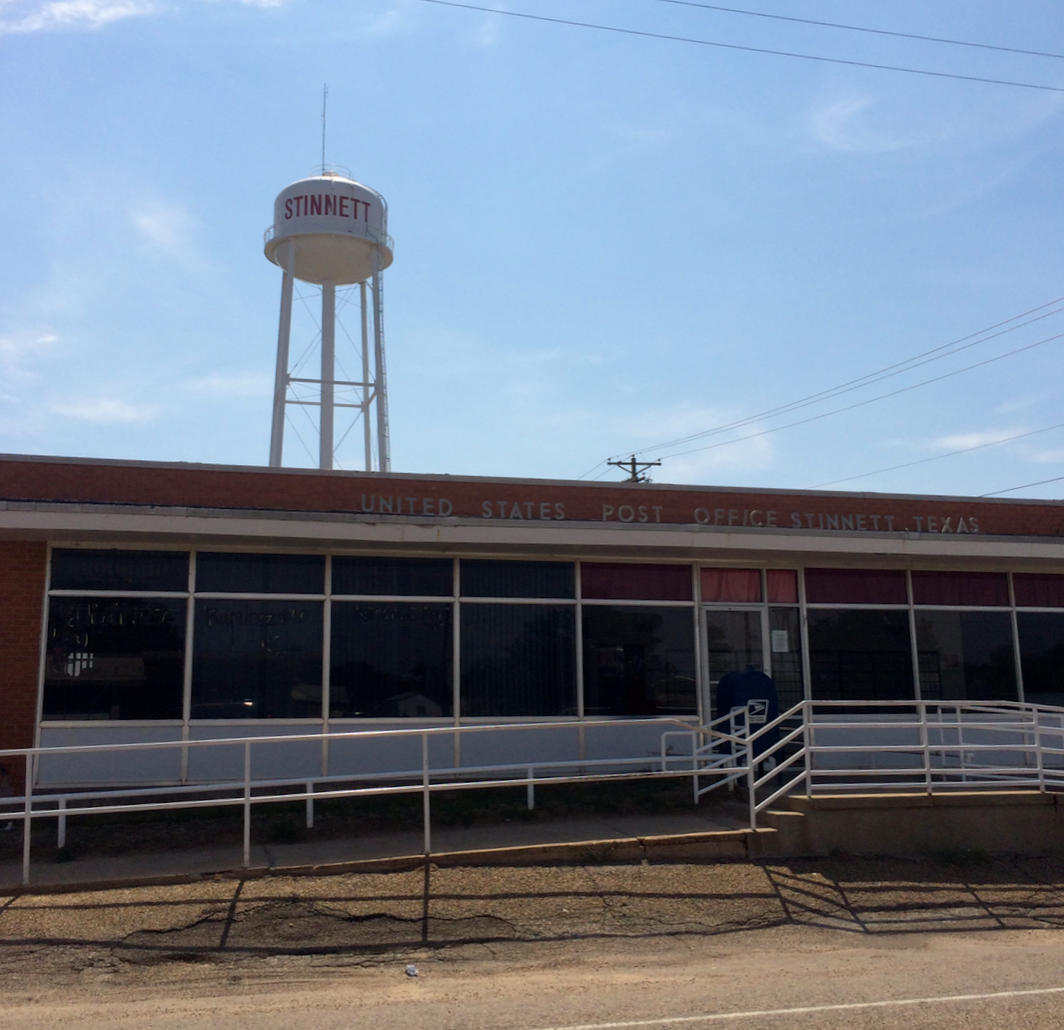 Adobe Walls was once a trading post near the Canadian River in present-day, northeastern Hutchinson County. Over the course of history, two famed Indian battles occurred here: one against the US army, and another against pioneers. You can read more about them from the link above.

While in Hutchinson County, I was curious about the battle and decided to visit the site. Todays, it’s denoted by a series of monuments standing out in the middle of the Hutchinson County countryside. As the bird flies, the site is about seventeen miles northeast of Stinnett, but the distance it takes to drive there on actual roads is about twenty-eight. 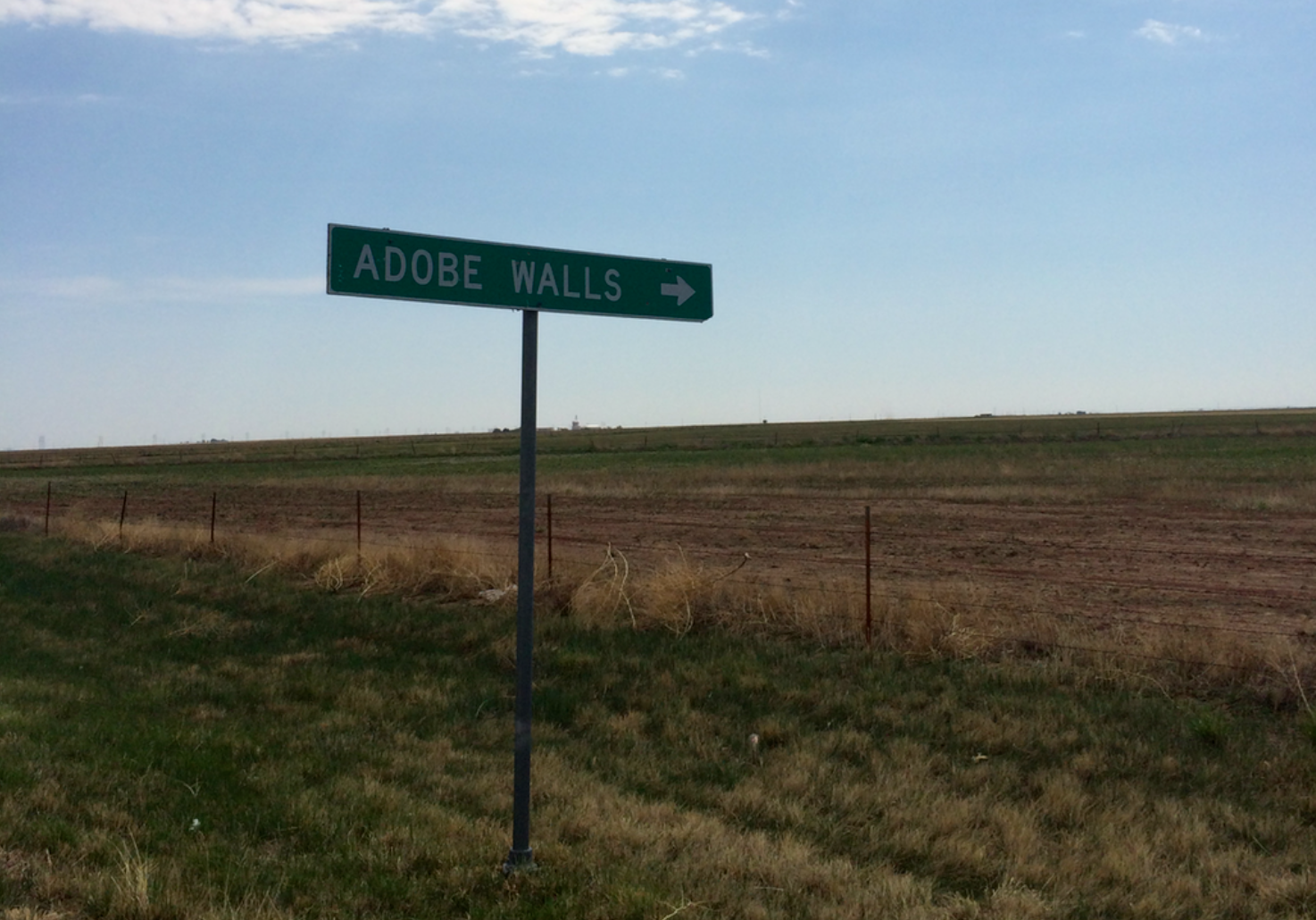 Views from the small road that gives access to Adobe Walls

This area is primarily under the control of the Turkey Track Ranch.

A panoramic view of the Adobe Walls Valley 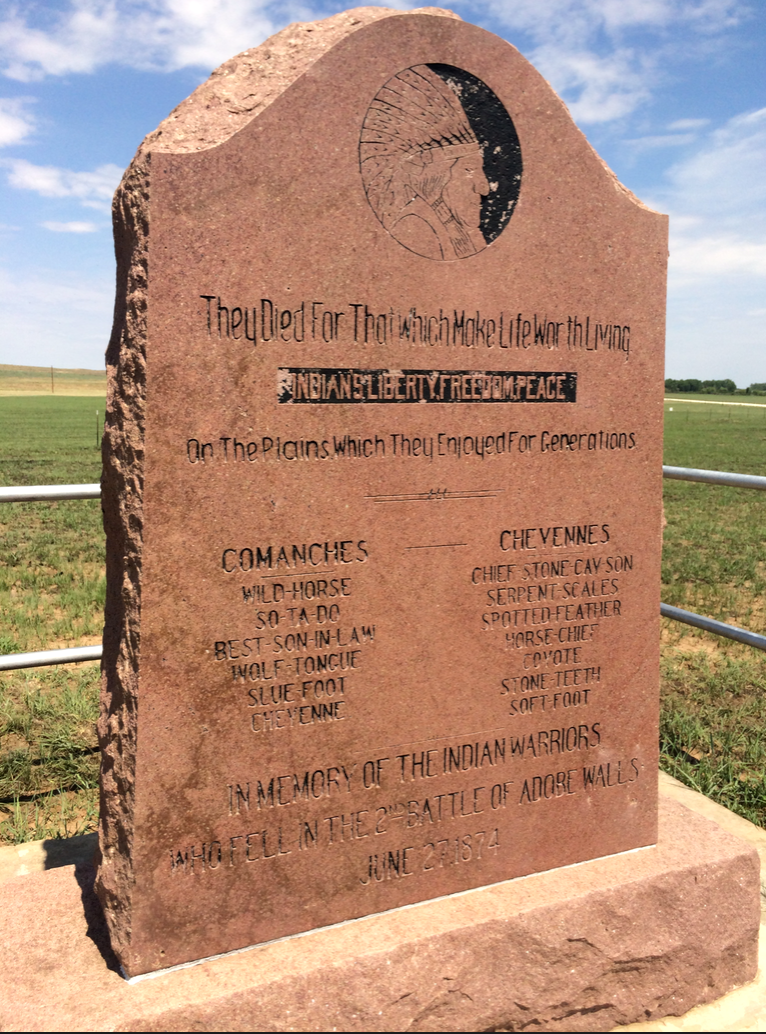 …and one honoring the fallen Comanche and Cheyenne as well. This one is several yards away from the other. 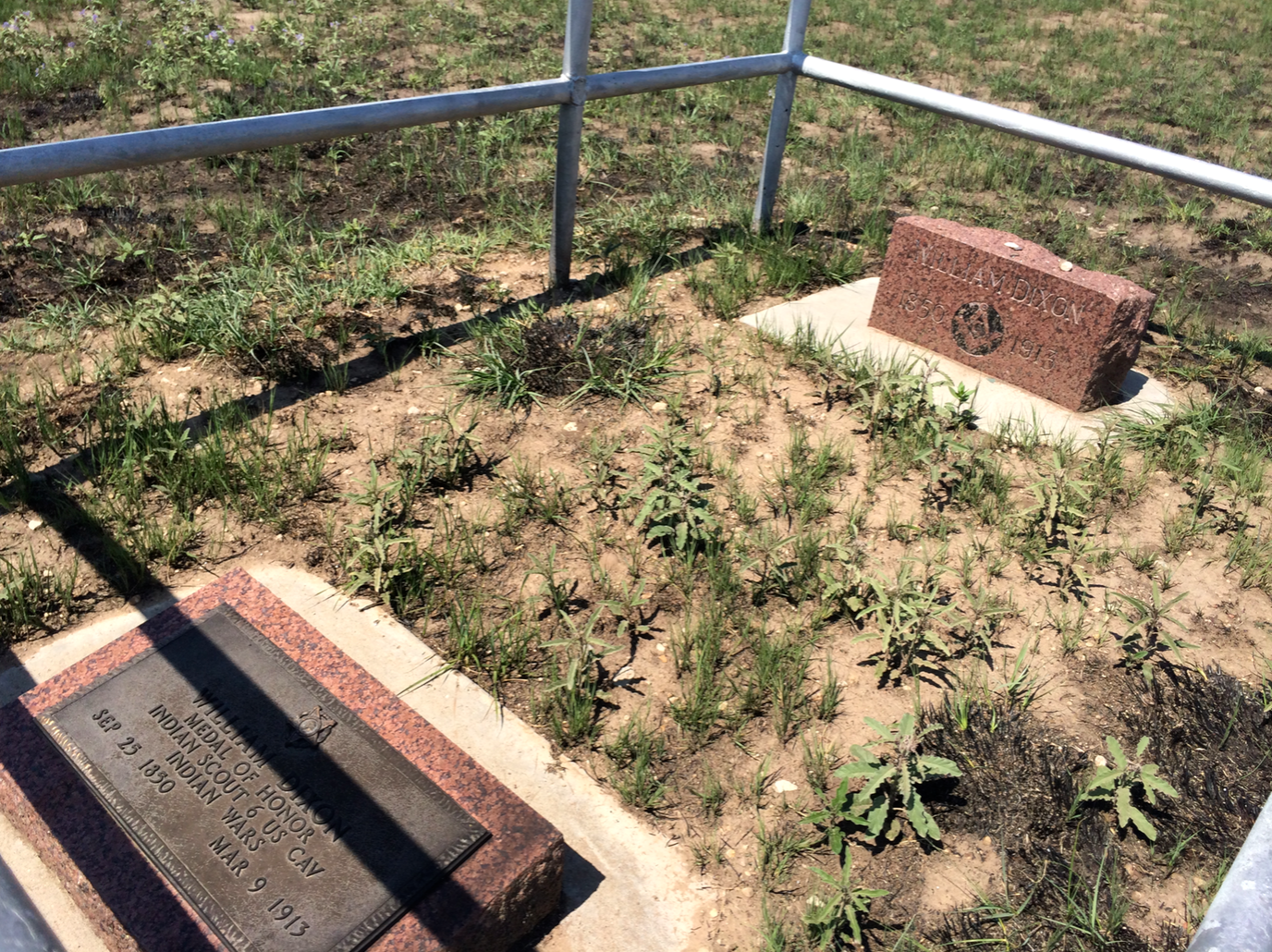 William “Billy” Dixon was undisputedly the hero of the Second Battle of Adobe Walls. This is his grave. He’s best remembered for his record rifle shot that unseated a Comanche warrior one mile away. You can see the mesa the rider was positioned on in the photo below.