“Carson County was named for Samuel P. Carson, the first secretary of state of the Republic of Texas. The county occupies 900 square miles of level to rolling prairies surfaced by dark clay and loam that make the county almost completely tillable and productive. Native grasses and various crops such as wheat, oats, barley, grain sorghums, and corn flourish. The huge Ogallala Aquifer beneath the surface provides water for people, crops, and livestock.”

“American buffalo hunters penetrated the Panhandle in the early 1870s as they slaughtered the great southern herd. The ensuing Indian wars, culminated by the Red River War of 1874, led to the extermination of the buffalo and the removal of the Comanches to Indian Territory. The Panhandle was thus opened to settlement. Carson County was established in 1876, when its territory was marked off from the Bexar District.”

“Ranchers appeared in Carson County in the early 1880s. The JA Ranch of Charles Goodnight and John G. Adair and the Turkey Track Ranch both grazed large ranges in Carson County by 1880. In 1882 Charles G. Francklyn purchased 637,440 acres of railroad lands in Gray, Carson, Hutchinson, and Roberts counties, 281,000 of them in Carson County.” 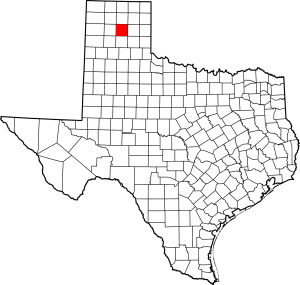 “In the later 1880s the railroads reached Carson County. By 1886 the Southern Kansas Railway, a subsidiary of the Atchison, Topeka and Santa Fe, had built from Kiowa, Kansas, to the Texas-Indian Territory border. The Southern Kansas of Texas Railway was formed to extend the line into Texas. Panhandle City, a temporary railhead, was founded in 1887 in anticipation of the railroad line, which finally reached the town in 1888.”

“By 1890 Carson County had a rail network, and its first town, soon known simply as Panhandle; that year, the United States census listed twenty-eight ranches or farms in the area, and 356 people were living in the county, all of them white and twenty-nine of them foreign-born.”

“Water had to be brought to Panhandle by railroad from the area of Miami in Roberts County, then carried in barrels on wagons to homesteads. This problem hindered development until it was found that abundant underground water could be pumped to the surface by windmills. That discovery, together with the selling of White Deer lands to small ranchers and farmers in 1902, greatly increased the area’s attractiveness.”

“During the early twentieth century both Europeans and Americans built the agricultural economy of the county and added variety to the cultural milieu of the Panhandle. Anglo-American farmers arrived early in the century, settling as early as 1901 and 1902 around the new town of Groom in the southeastern corner of the county. A large number of German Catholics arrived in western Carson County and eastern Potter County between 1909 and the 1920s. They established St. Francis, a community that straddles the Potter-Carson county line.”

“Likewise, a large Polish Catholic population developed in the eastern part of the county on lands purchased from White Deer lands by immigrants. They began to arrive in 1909 and centered their community around a new village named White Deer, laid out in the same year.”

“As the county’s economy developed between 1900 and 1930, its population rose. In 1910 the census counted 2,027 residents in Carson County, and by 1930 the population had increased to 7,745. During the Great Depression of the 1930s, however, agricultural production dropped off, and many local farmers were forced to leave their lands.”

“During and since World War II defense spending by the federal government has helped the local economy. In September 1942 the Pantex Ordnance Plant began to manufacture bombs and artillery shells. The plant was on 16,076 acres of southwestern Carson County land, where it operated until August 1945. In 1949 Texas Technological College (now Texas Tech University) acquired the site for use as an agricultural experiment station. During the Korean War, however, the federal government took back more than 10,000 acres of the site for use as a nuclear weapons assembly plant.” 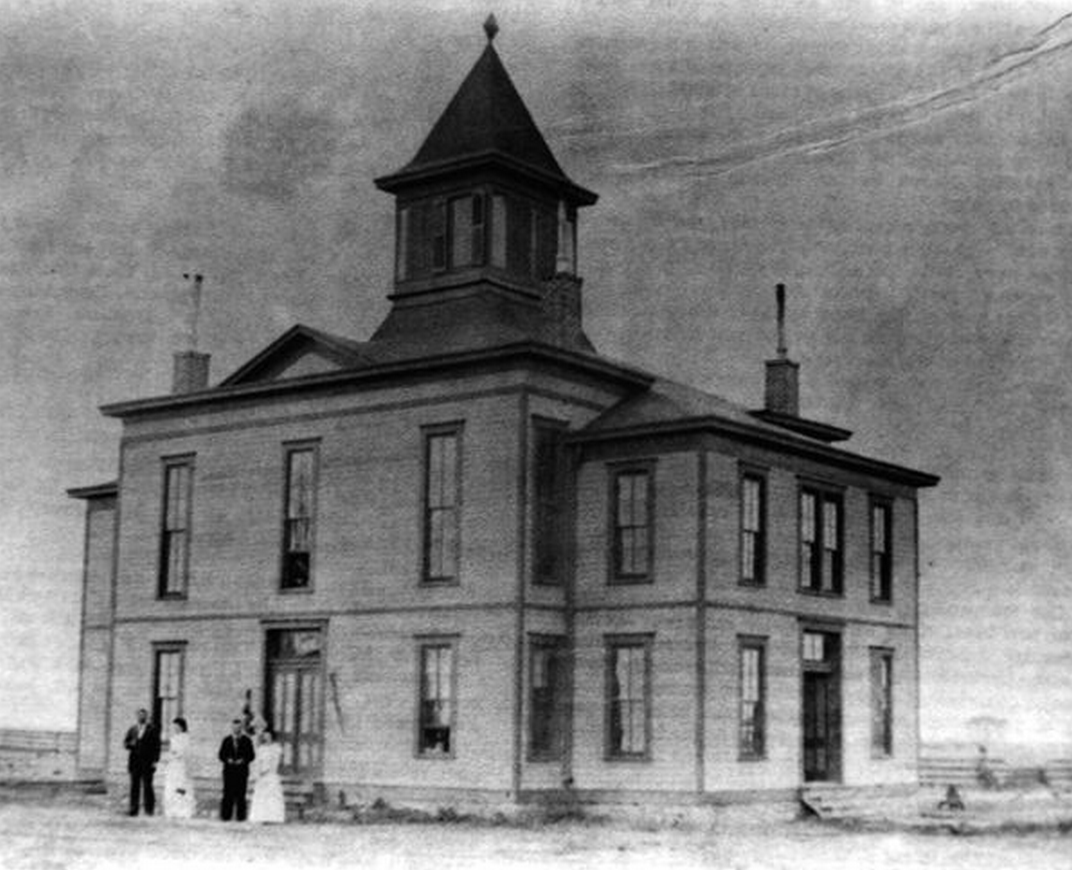 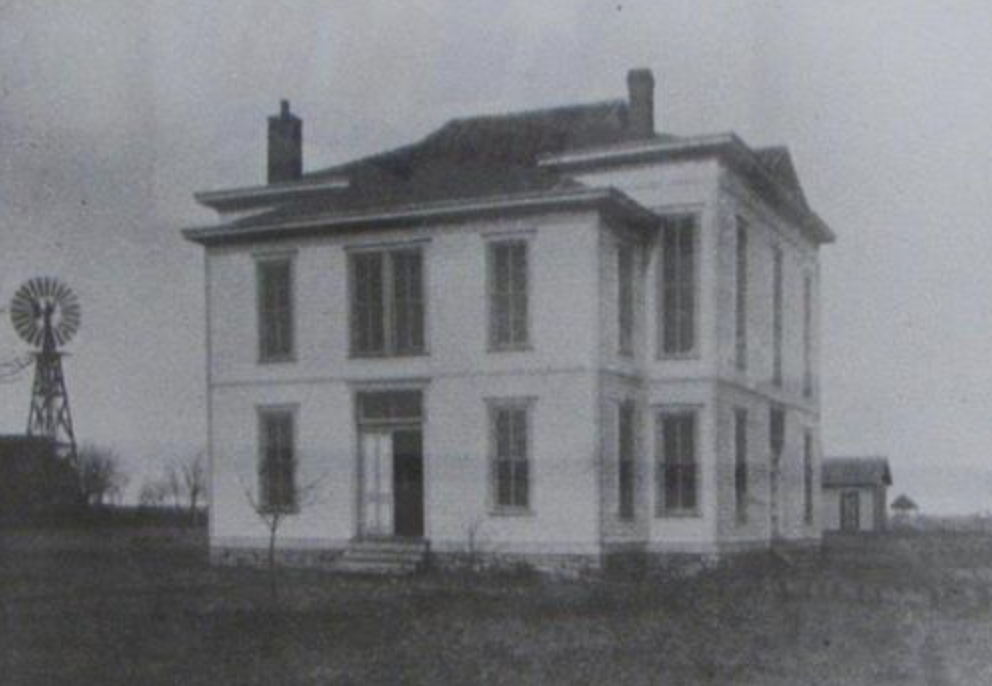 Much about this courthouse is unknown except that at some point throughout its existence, its cupola was removed. In 1901, the entire building was demolished. 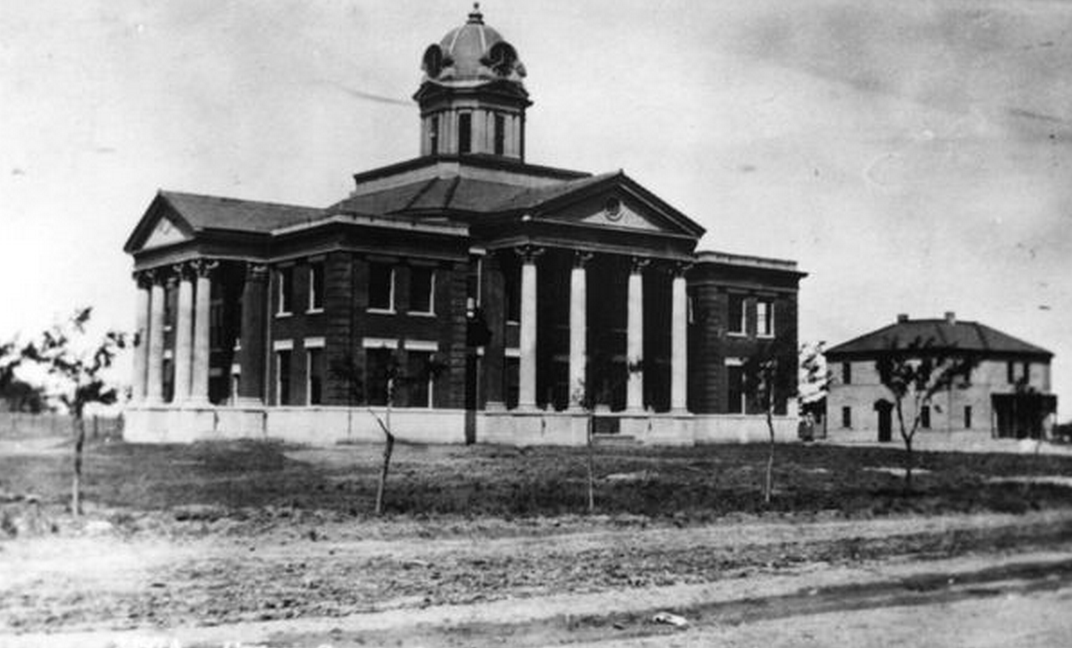 Eight years later, Carson County constructed this impressive courthouse as a proper successor. Surprisingly, there is no definitive documentation as to who constructed this Classical Revival building. However, its overall appearance lends credence to the theory that it was Leslie L. Thurmon of Dallas. At any rate, the contractors belonged to the Falls City Construction Co.

The courthouse was regrettably demolished in 1950, so the county could replace it with something more modern.

The Moderne replacement was designed by J.C. Berry, with aid from the Kerr & Kerr firm. The contractor on hand was Neill Singleton.

The Texas Historical Commission describes the courthouse as a:

The main façade of the Carson County Courthouse faces northeast on Main Street. 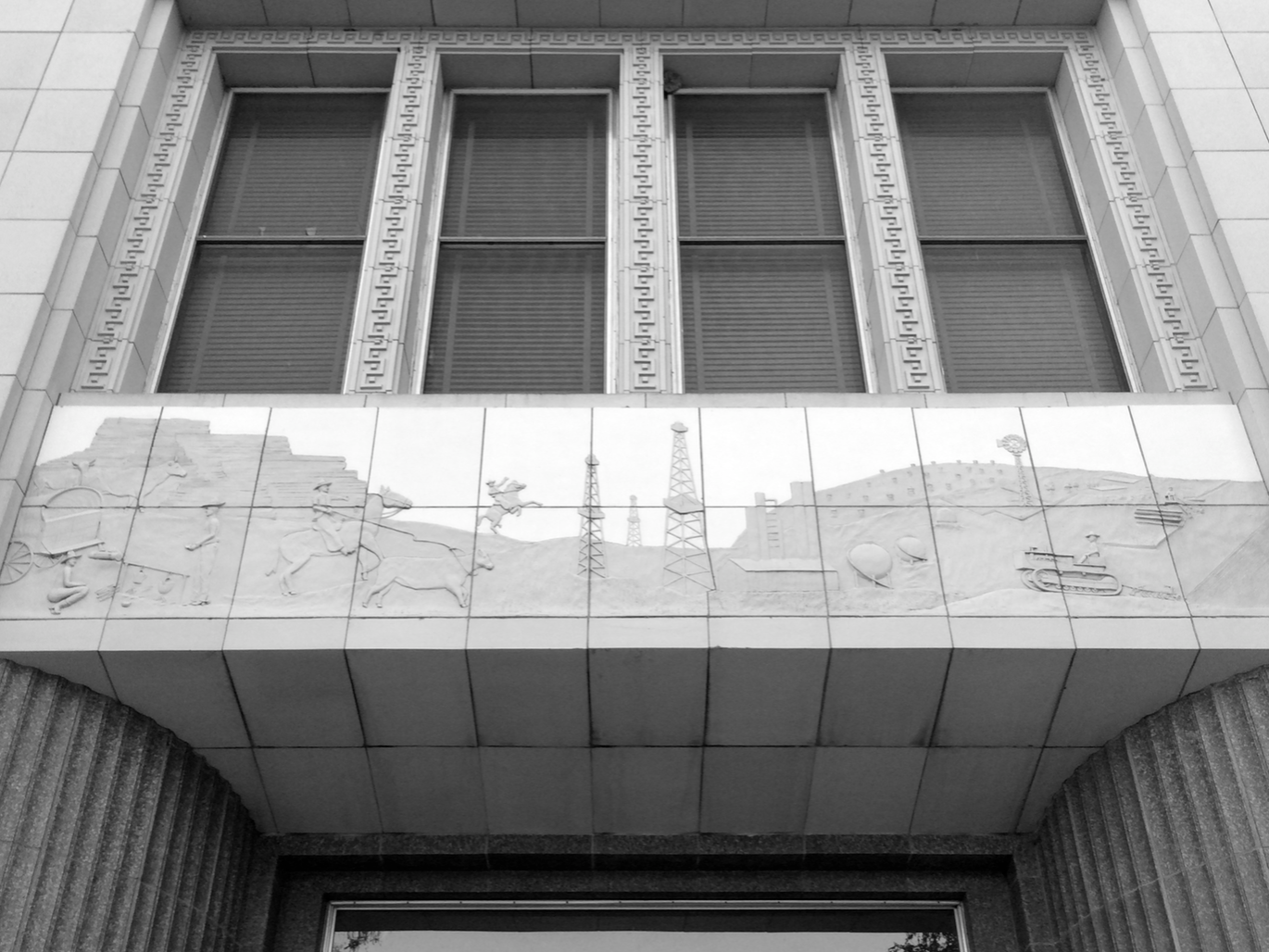 A detailed mural above the main doors portrays the county’s economic history.

Main Street, as seen from the northeast doors 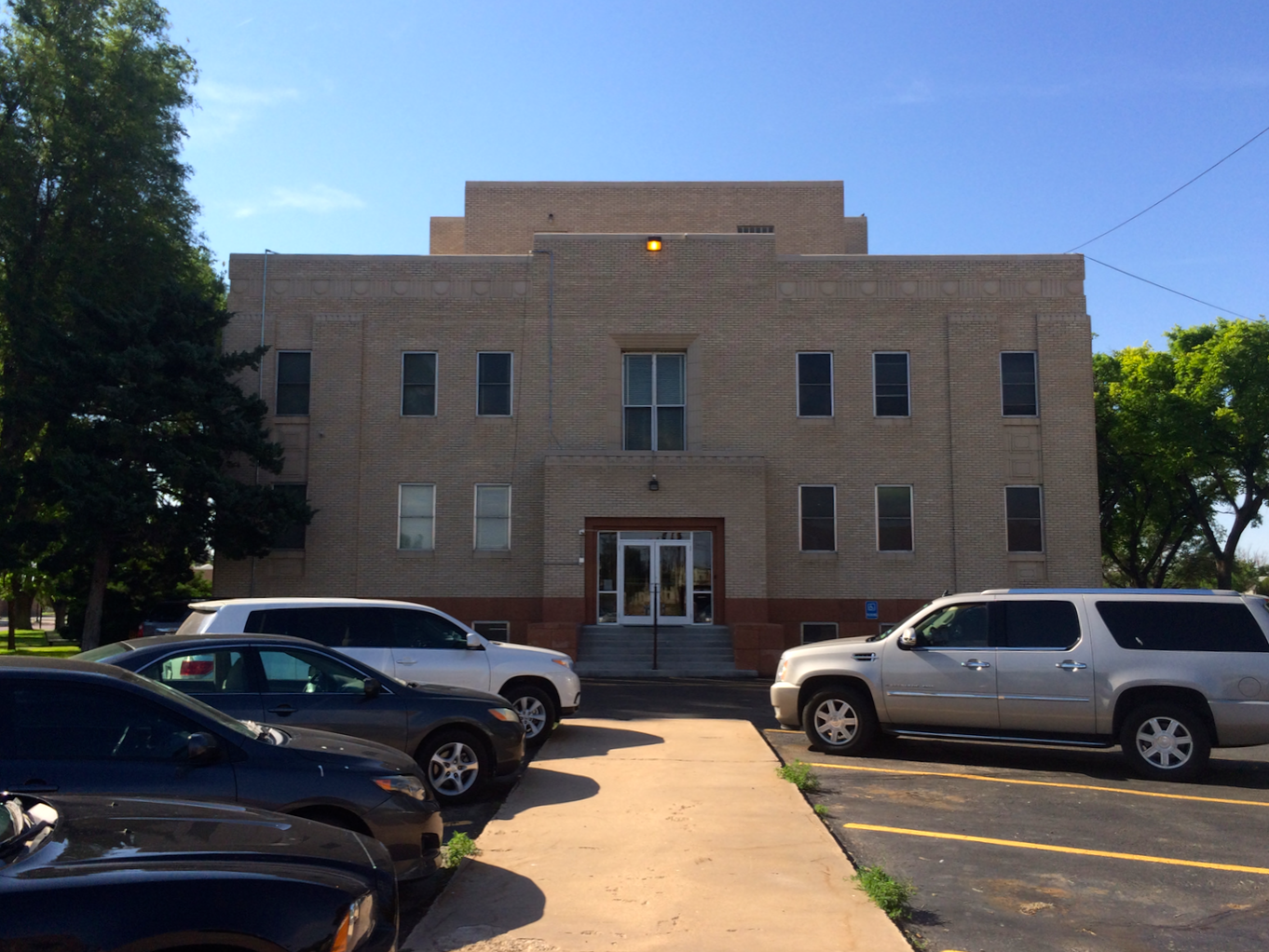 The northwest façade and an employee parking lot, on 6th Street 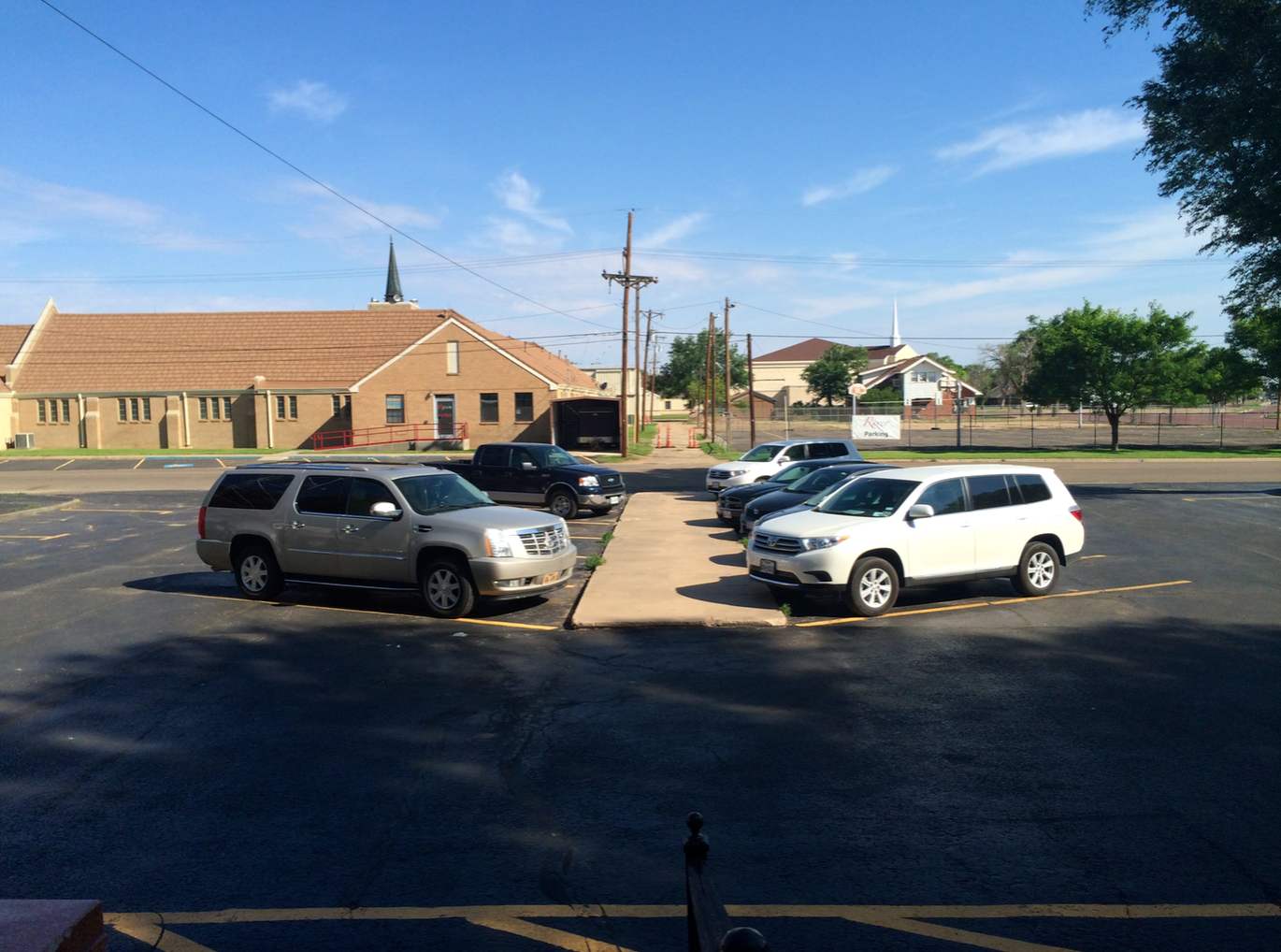 This is the view from those doors.

The southwestern façade holds no entrance. It faces Euclid Avenue.

A series of air conditioners and a very long downspout grace this side. 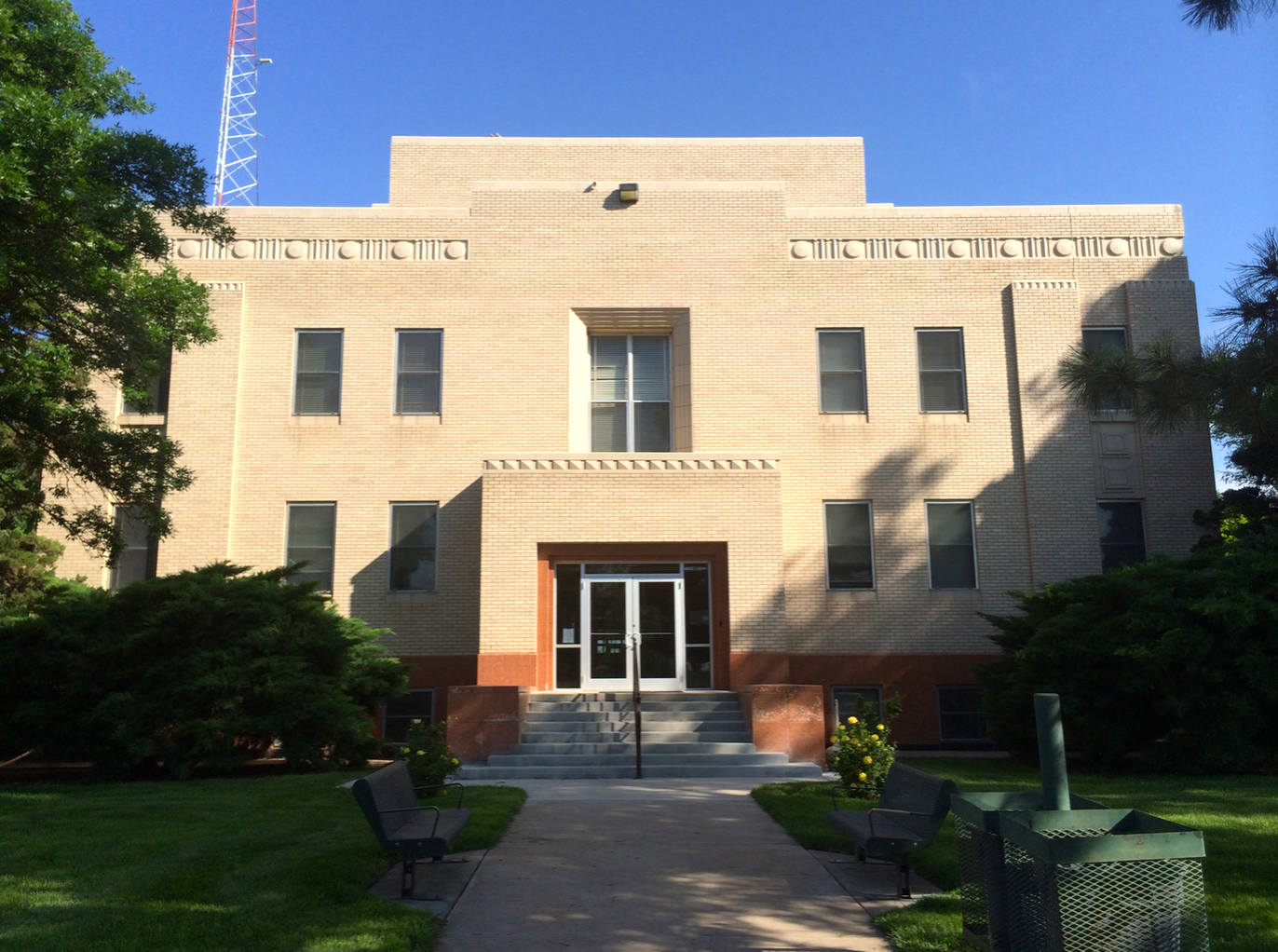 The southeast façade, on 5th Street

The view from the southeast steps 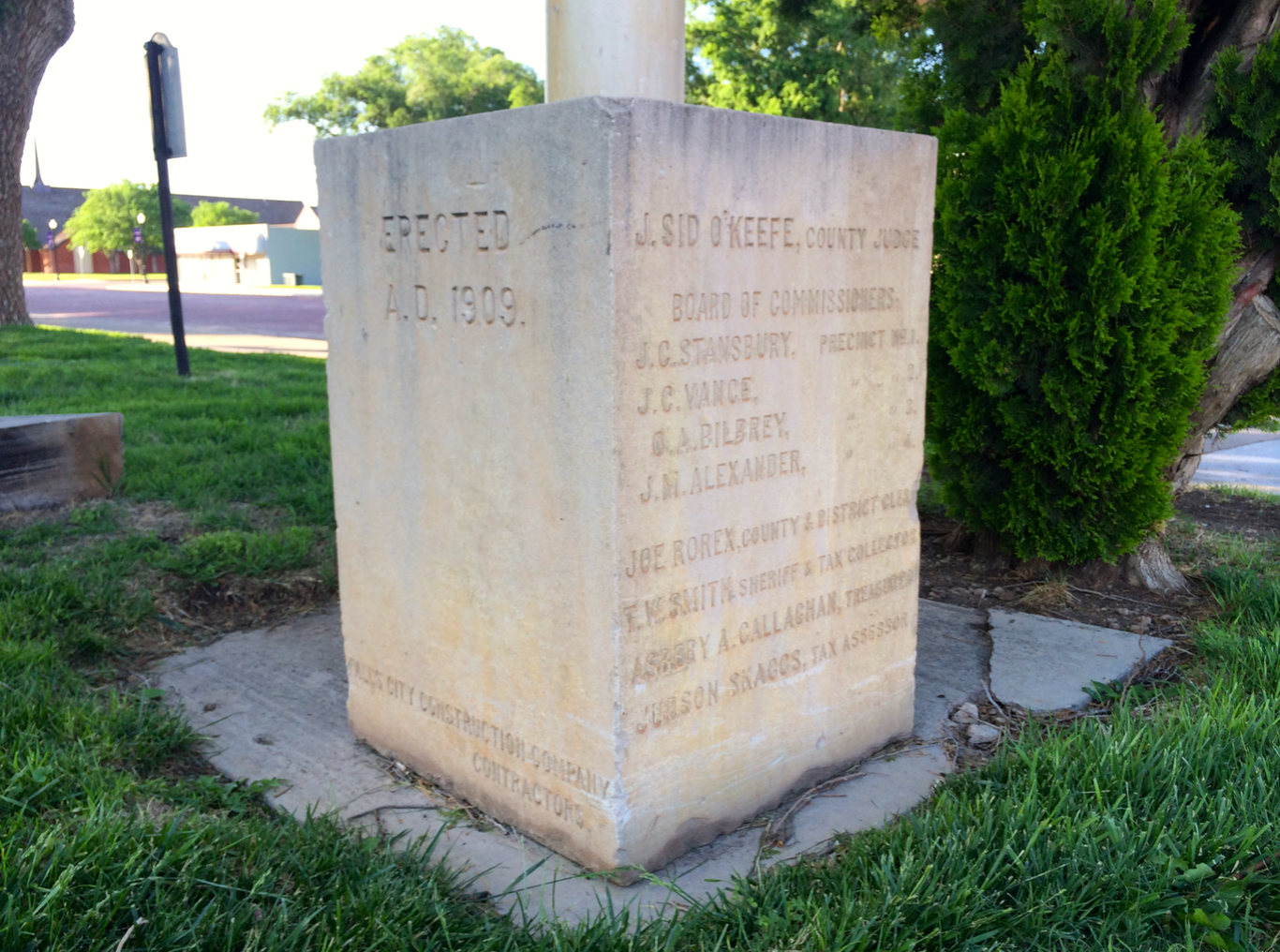 The 1909 Courthouse cornerstone sits on the southeast corner of the lawn. 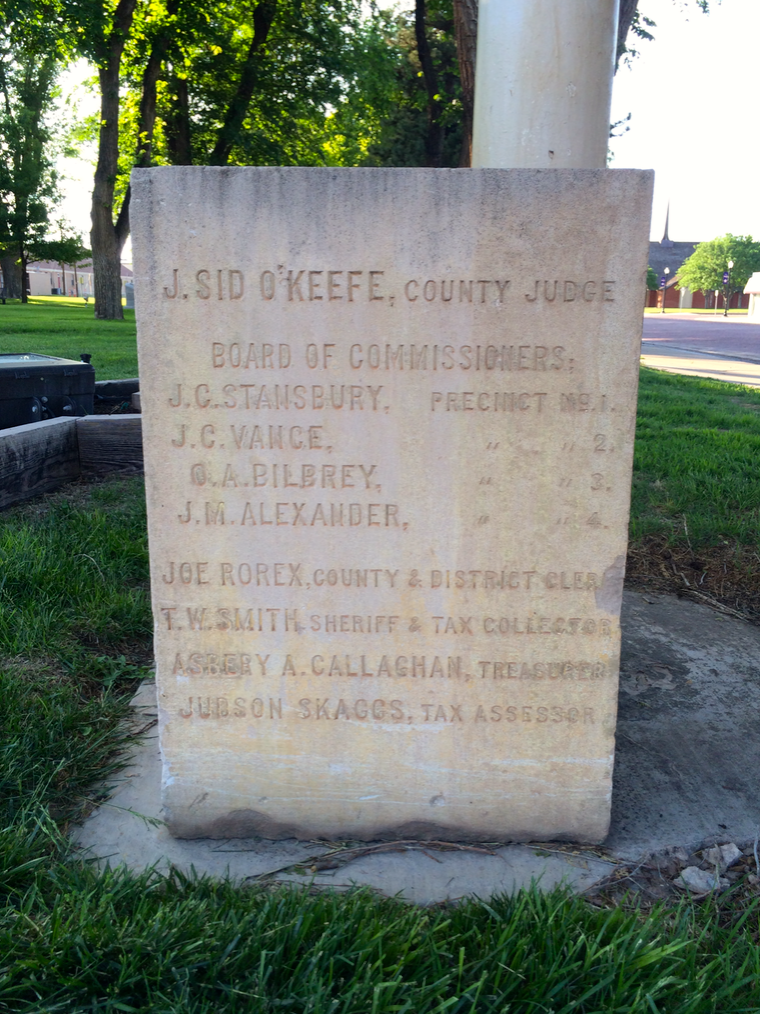 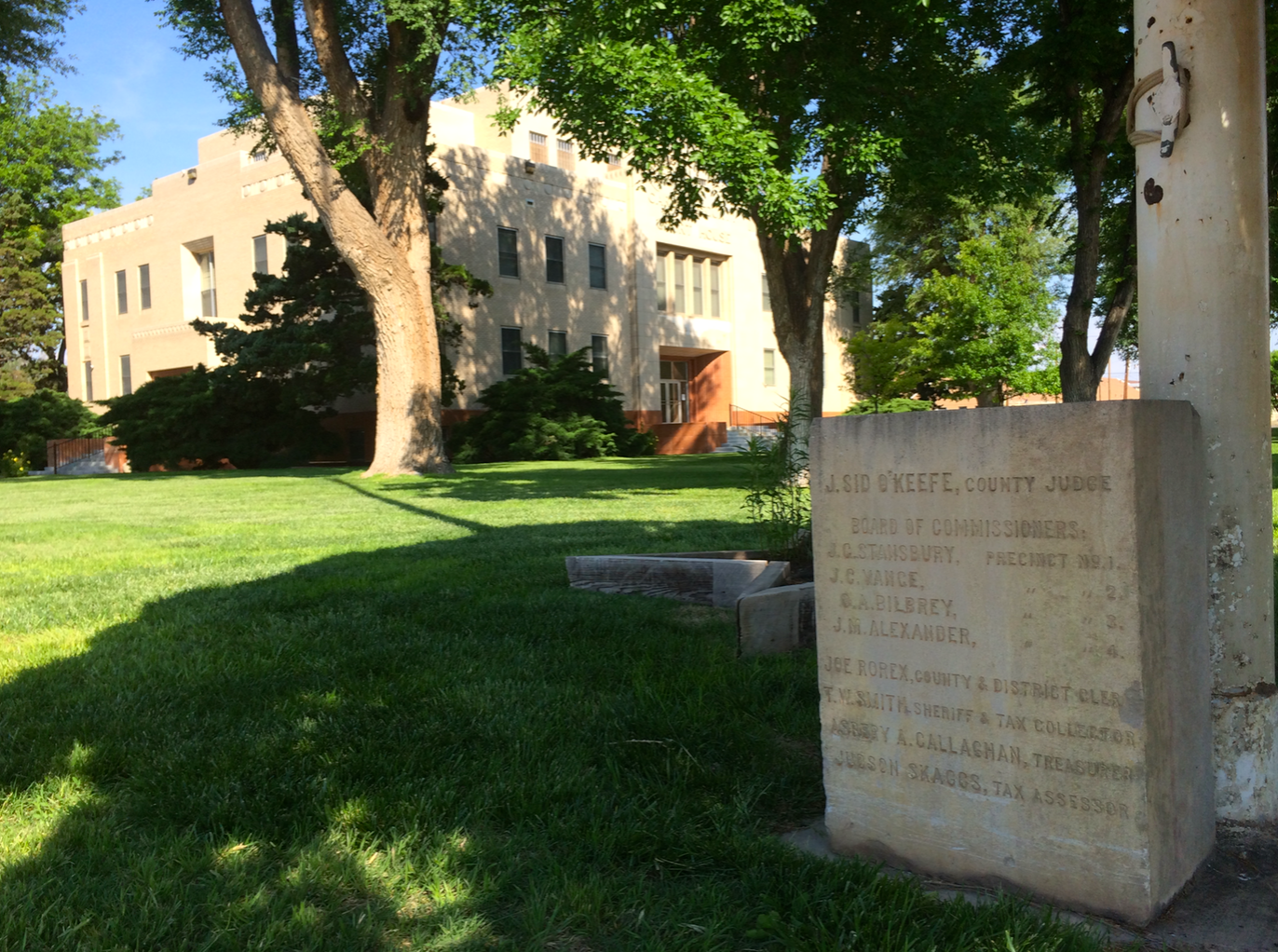 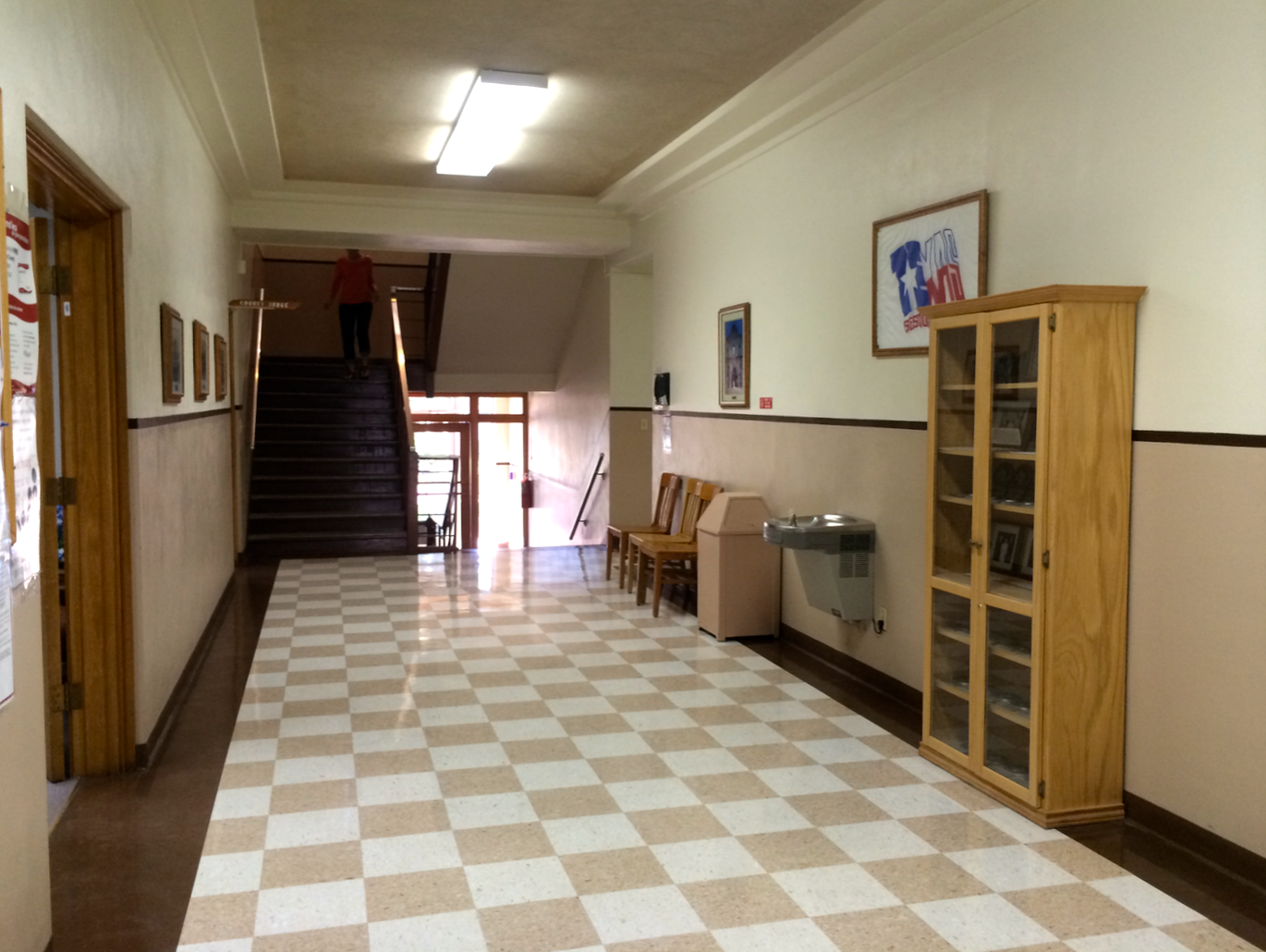 At one end of Main Street is Panhandle City Hall, housed in the historic Atchison, Topeka, & Santa Fe Railroad Depot. 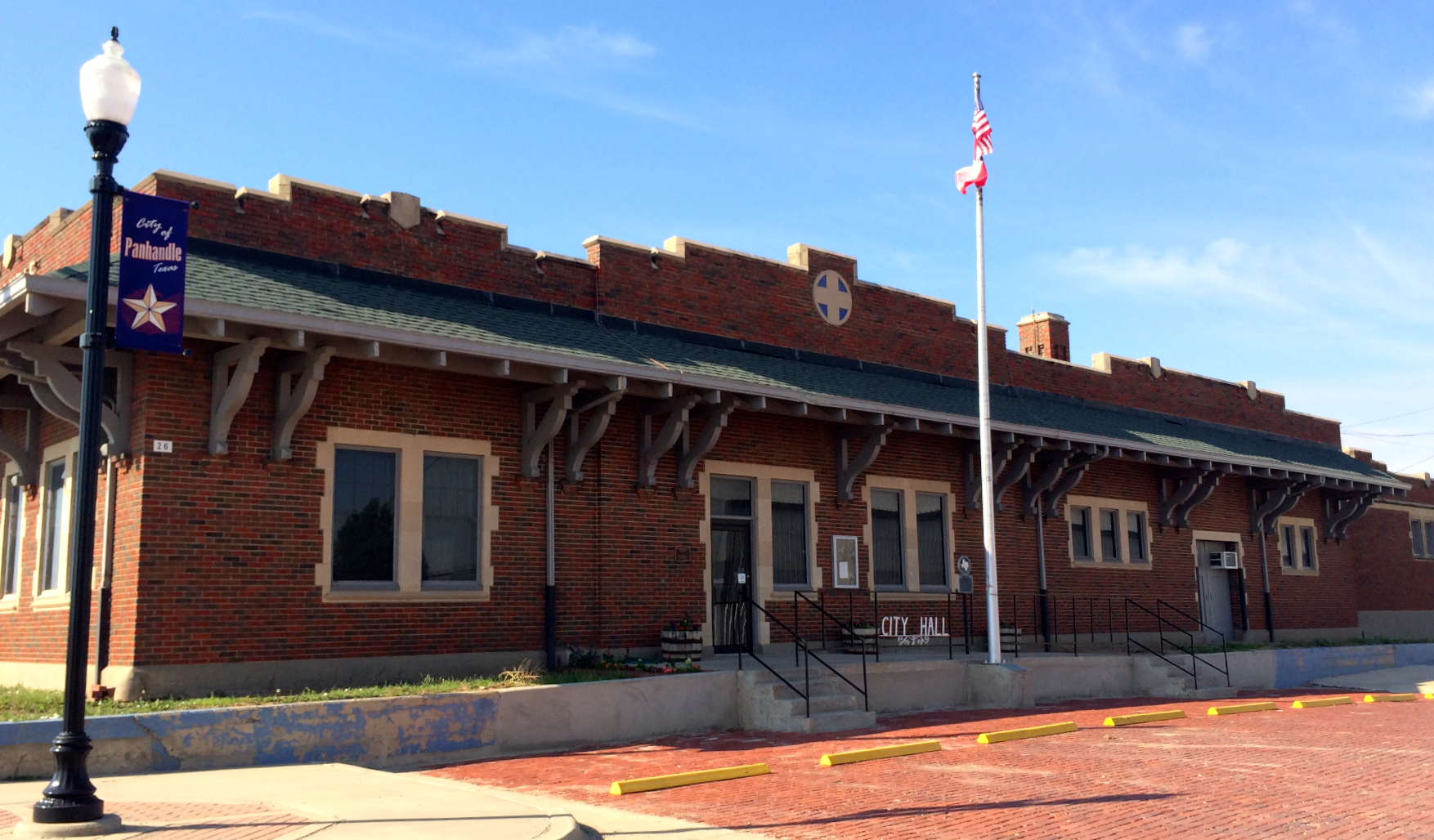 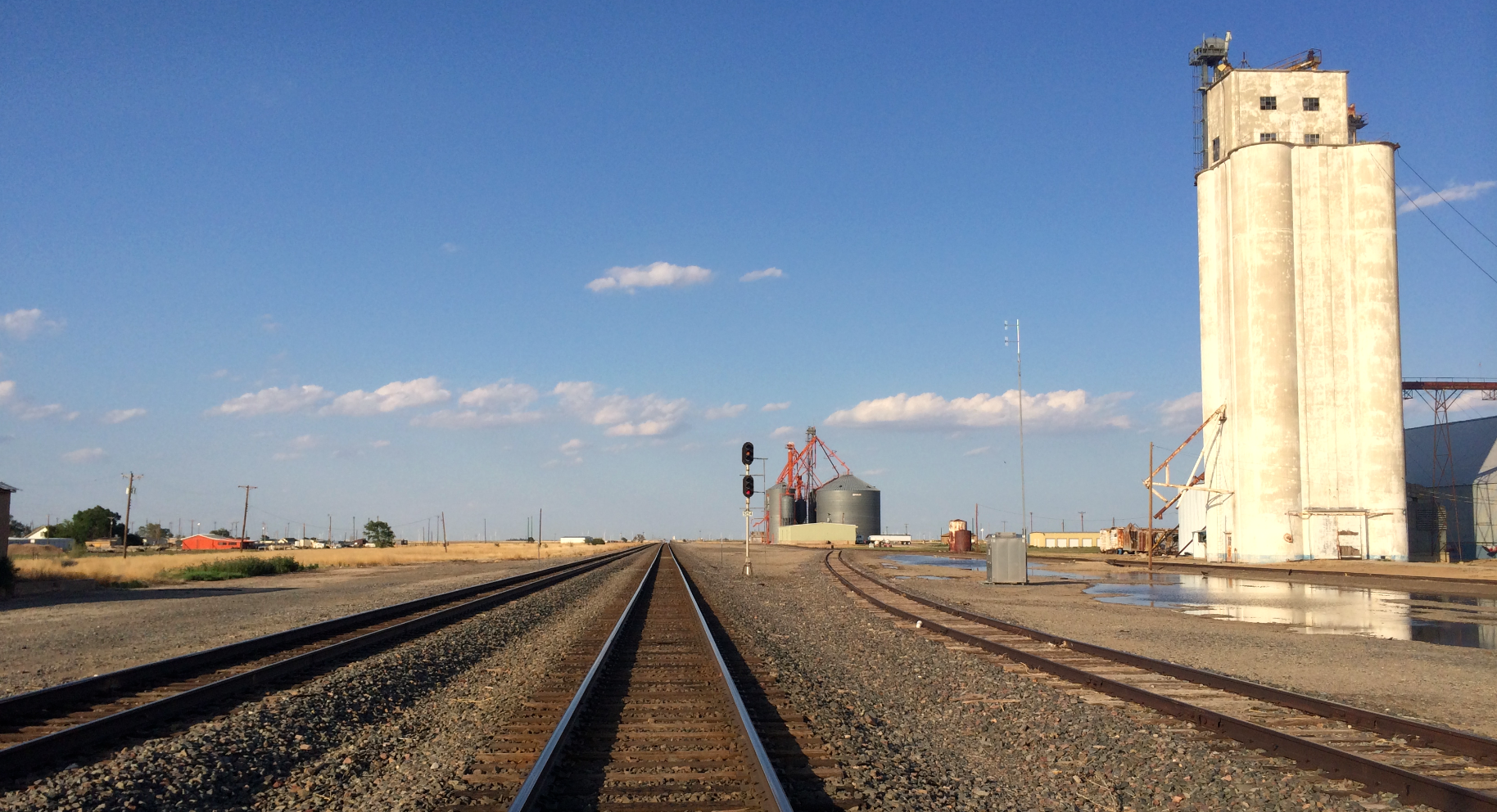