“The county occupies 934 square miles of level prairie and rolling river breaks. The county’s sandy loam and black waxy soils support a variety of native grasses as well as abundant wheat, corn, grain sorghum, and hay crops. The timber in the riverbottoms includes cottonwoods, hackberries, elms, and walnuts as well as the ever-present mesquite. The county has huge reservoirs of oil and natural gas.”

“Gray County is basically made up of two distinct parts: the flat plains in the west and north, and the Red River breaks in the east, center, and southeast. Gray County is at the head of the North Fork of the Red River; numerous intermittent and flowing creeks can be found in the eastern part of the county.” 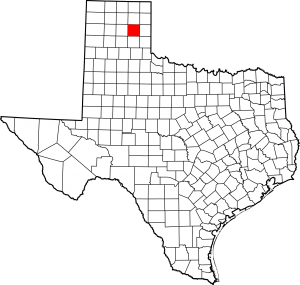 “Gray County, formed in 1876 out of the Bexar District, was named for http://254texascourthouses.com/best-casinos-online-europe-download/, a lawyer and politician of the Republic of Texas and Civil War eras.”

“The county’s prehistoric Plains Apache inhabitants gave way to the Apaches, who in turn were displaced by the Comanches and Kiowas. These peoples dominated the Panhandle until they were crushed in the Red River War of 1874 and removed to Indian Territory. With Gray County for settlement, ranchers began to reach the region as early as 1877.”

“In 1882 the Francklyn Land and Cattle Company purchased a huge tract of land that included the western part of Gray County. The company failed in 1886 and was reorganized as the White Deer Lands (formally the White Deer Lands Trust of British bondholders), which operated the huge Diamond F Ranch. For the rest of the nineteenth century Gray County remained the domain of cattle ranchers. The population, 56 in 1880, rose only to 203 in 1890 and 480 by 1900.”

“By the turn of the century the county’s stable stock-farming population felt a growing need for self-government. As a result, in 1902 the county was organized with Lefors as the county seat. Lefors, a tiny ranching town, remained the county seat until 1928, when Pampa’s oil-induced growth led to its becoming the county seat.”

“Railroads entered Gray County from two different points in two different eras. A Santa Fe subsidiary, the Southern Kansas Railway Company, building from Kansas to Amarillo in 1887 and 1888, crossed the northwest corner of the county as it progressed from Canadian to Panhandle. This line allowed settlers in Gray County to ship cattle more easily and economically and allowed for greater ease of travel, but did not bring an influx of settlers with it.”

“By the turn of the century, farmers began to appear in the county. White Deer Lands began to sell its huge holdings in 1902, and a land rush to the area of Carson and Gray counties began. The county population grew to 3,405 by 1910 and 4,663 by 1920. The newly arriving farmers settled in the western and northern parts of the county, planting wheat, corn, and grain sorghums on fertile, newly broken lands. Farming and ranching dominated the county’s economy for a short time, and then major petroleum discoveries greatly altered the county.”

“Oil and gas exploration began in the county during the early 1920s. A major discovery well five miles south of Pampa, the H. F. Wilcox Oil and Gas Company’s Worley-Reynolds well, drilled in 1926, led to more developments around Lefors. Between 1925 and 1928 increasing amounts of oil came out of the county’s three oilfields (the Lefors, Bowers, and south Pampa fields). Production mushroomed in 1929, and the county became and remained a substantial oil producer. As of 1990 it had produced 642,556,026 barrels of oil.”

“The modern economy of the county depends upon a mix of oil, petrochemicals, farming, and ranching. In 2002 the county had 351 farms and ranches covering 452,820 acres, 63 percent of which were devoted to pasture and 35 percent to pasture. In that year farmers and ranchers in the area earned $94,867,000; livestock sales accounted for $87,340,000 of the total. Cattle, wheat, sorghum, hay, corn, and soybeans were the chief agricultural products.” 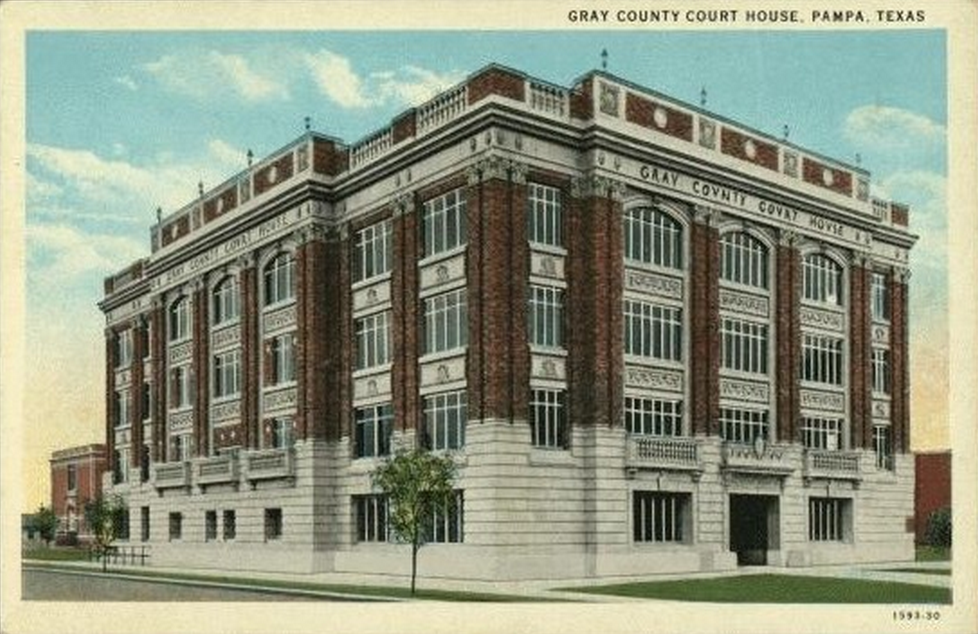 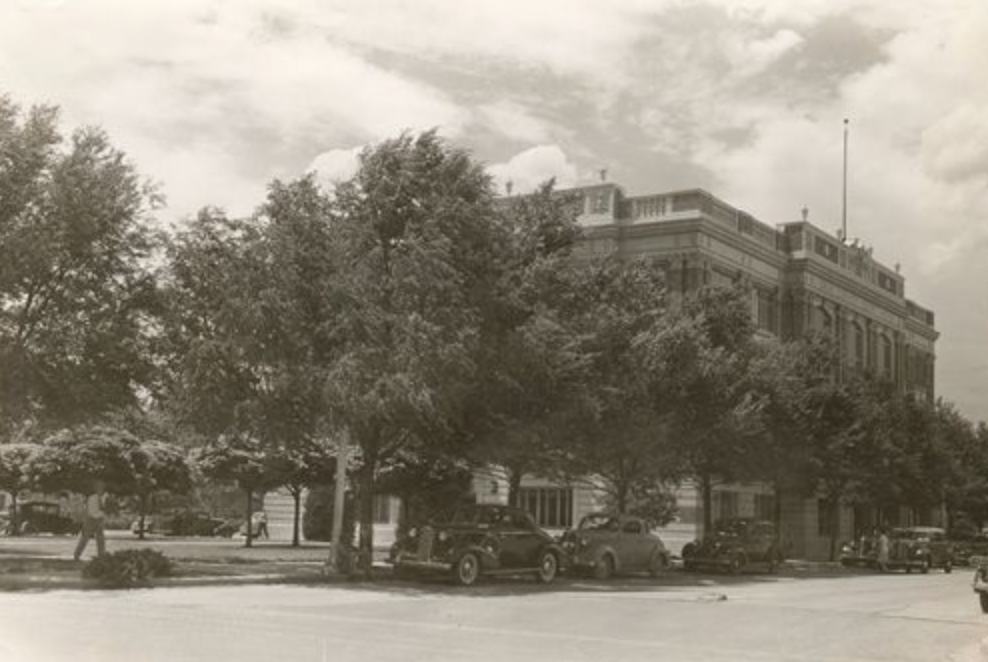 A wooden frame building had been built in 1902 in Gray County’s original seat, Lefors, but that building was sold in 1928 when the government moved to Pampa. They very same year, a second courthouse was built. It was designed by W.R. Kaufman in the Classical Revival style, but with some elements classified in the Beaux-Arts school. The H.L. Case Company constructed it throughout 1928, and completed it the next year.

According to the Texas Historical Commission, the courthouse is a:

An annex was added in 1959, but it was destroyed by a tornado in 1970. It just goes to show you what part of Texas Gray County’s in. 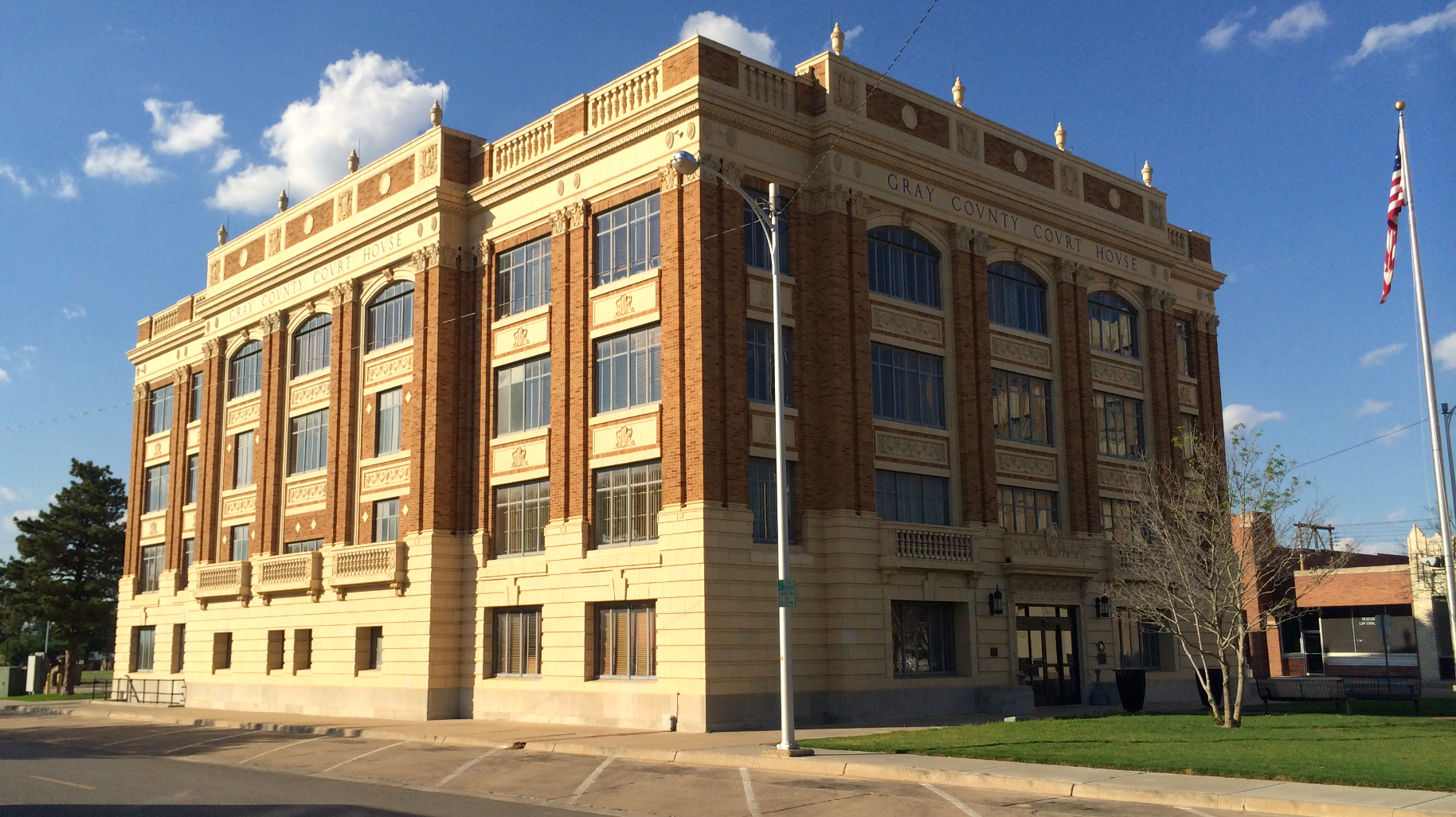 The courthouse doesn’t sit in a large, square green like most. Rather, it lies in a more “streamlined” version of a courthouse lawn. Two of its sides are bounded by the road, while two are not. 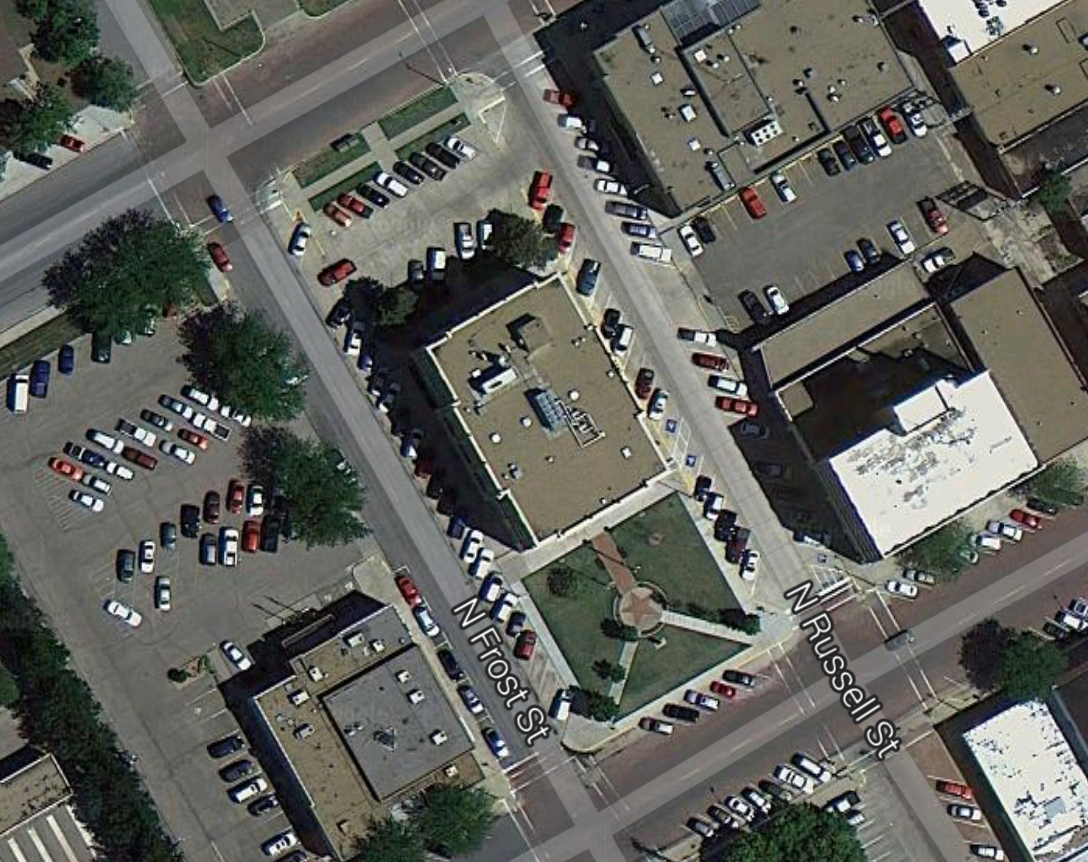 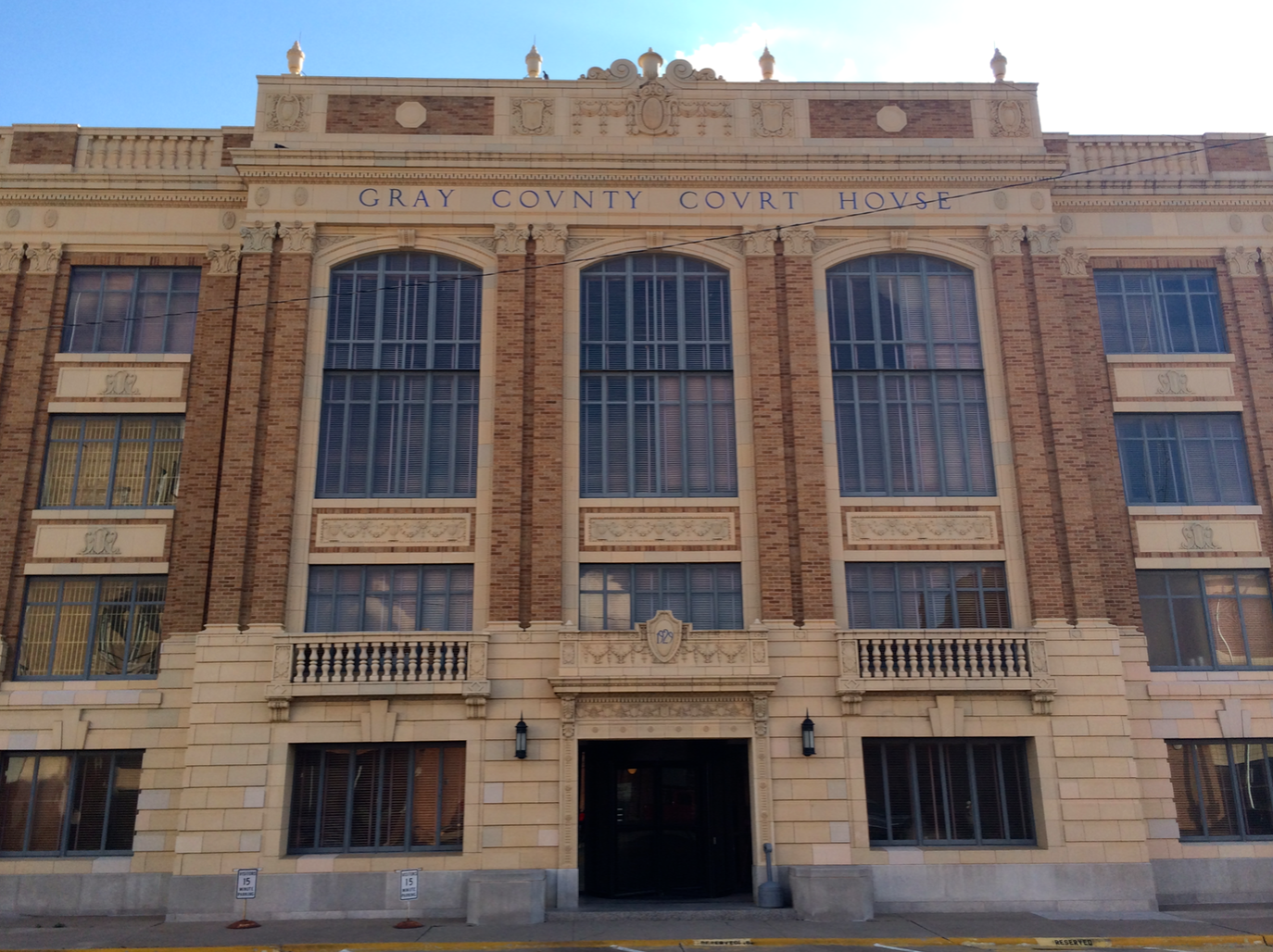 This positioning made photography of the courthouse all the more interesting. This is the northeast façade, on Russell Street. 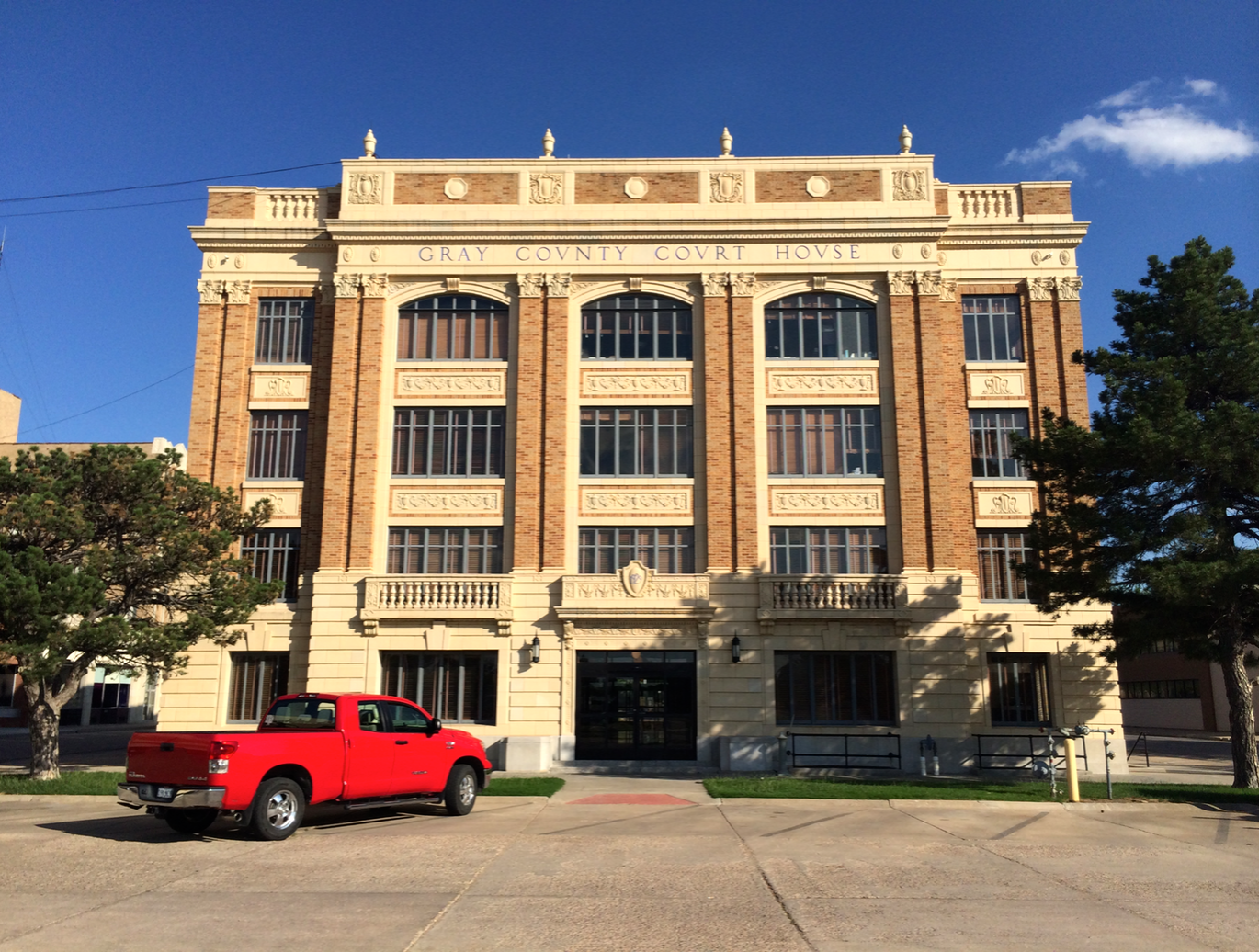 The northwest façade faces a parking lot and Francis Avenue.

The northwest corner, with Pampa City Hall visible in the background 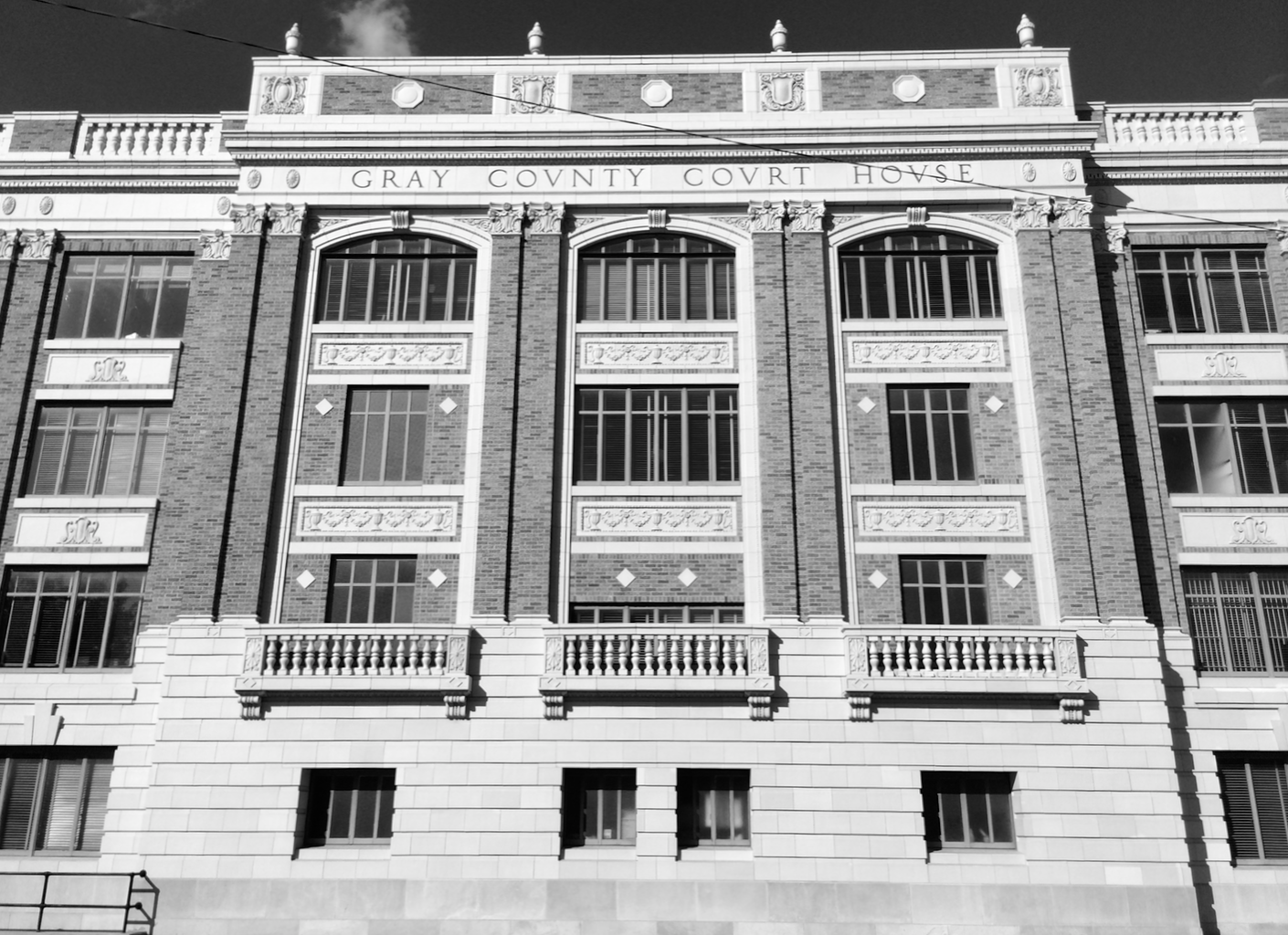 The southwest façade is on Frost Street. It’s the only one without an entrance. 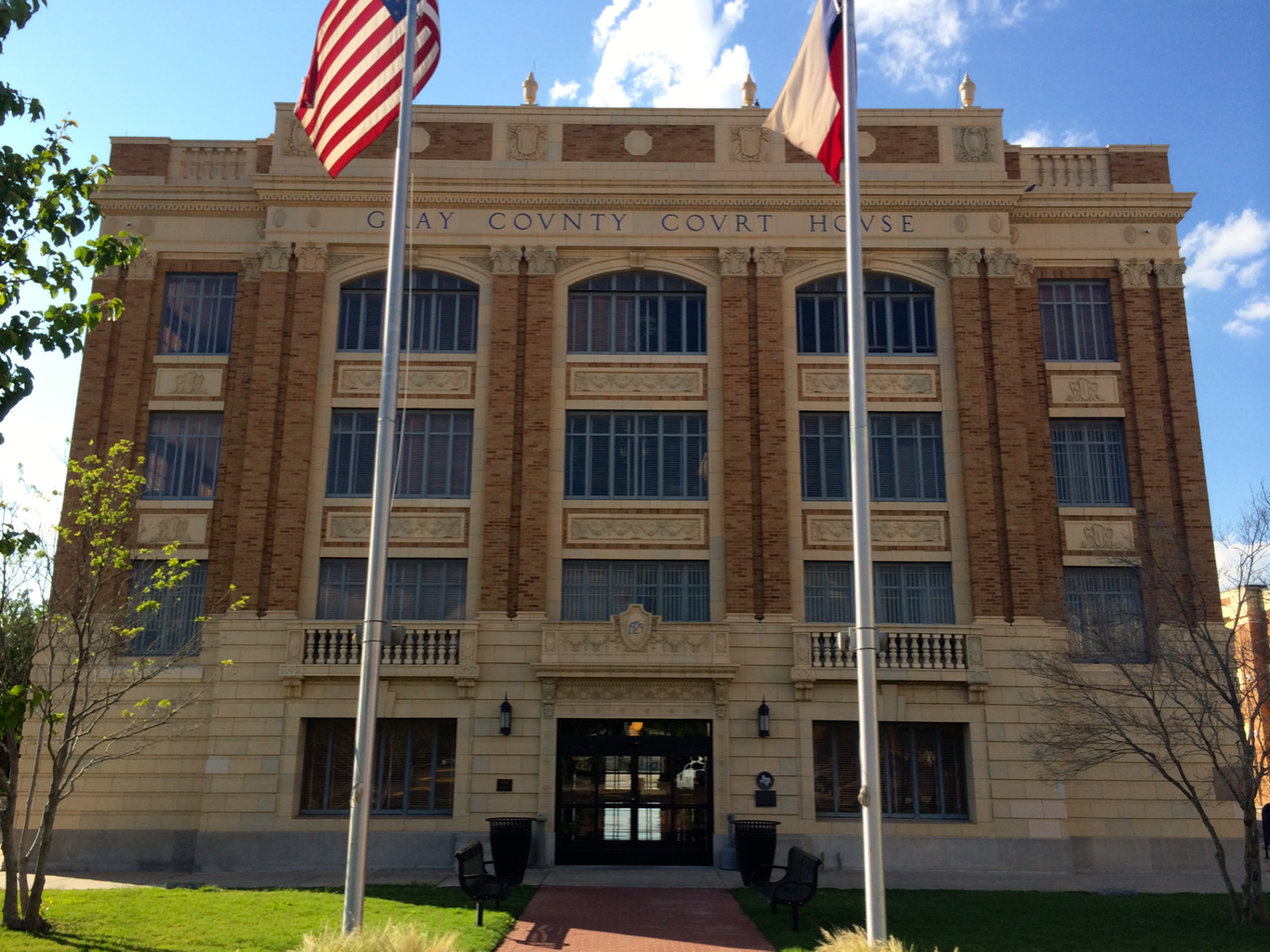 The southeast façade, on Kingsmill Avenue, is the main one. 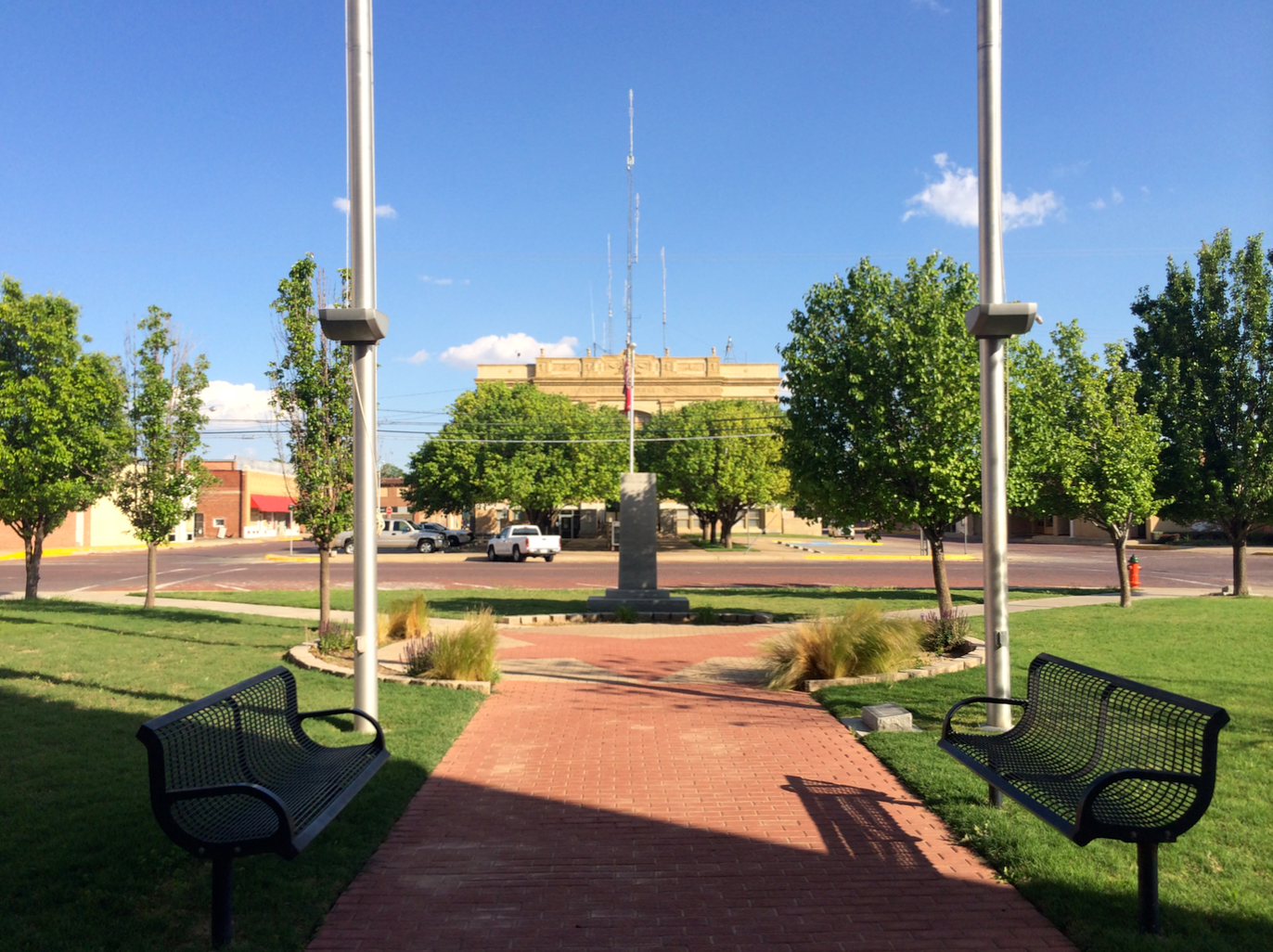 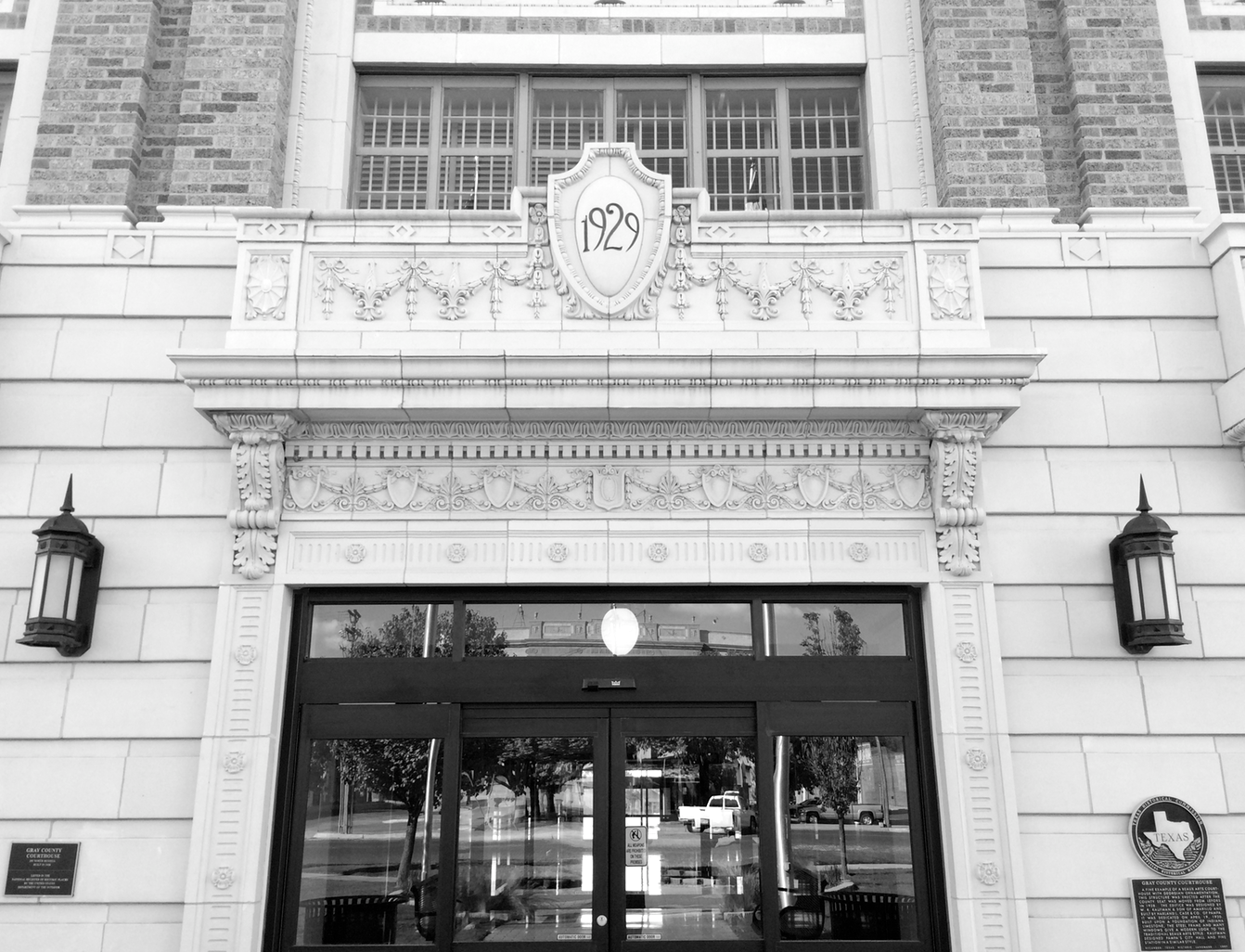 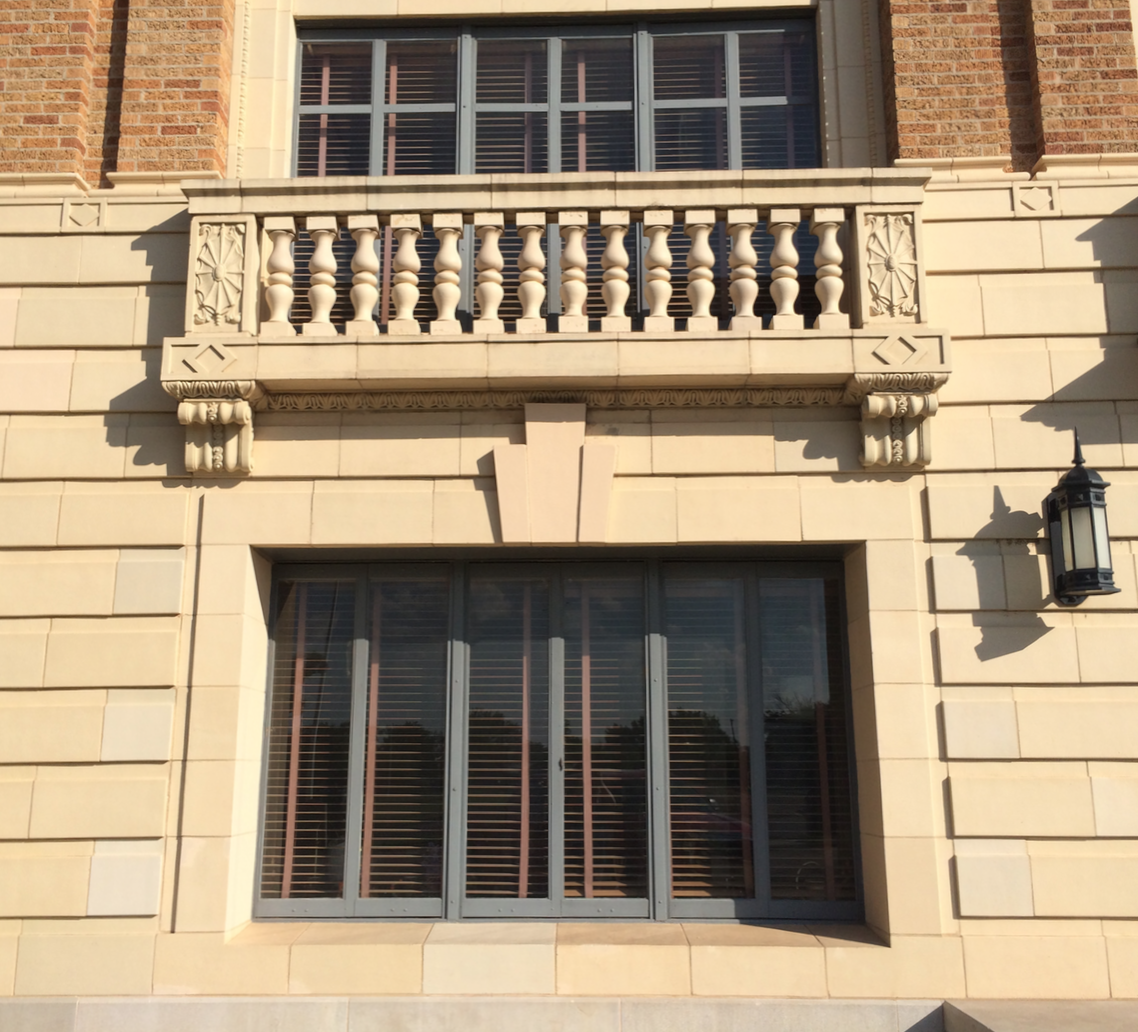 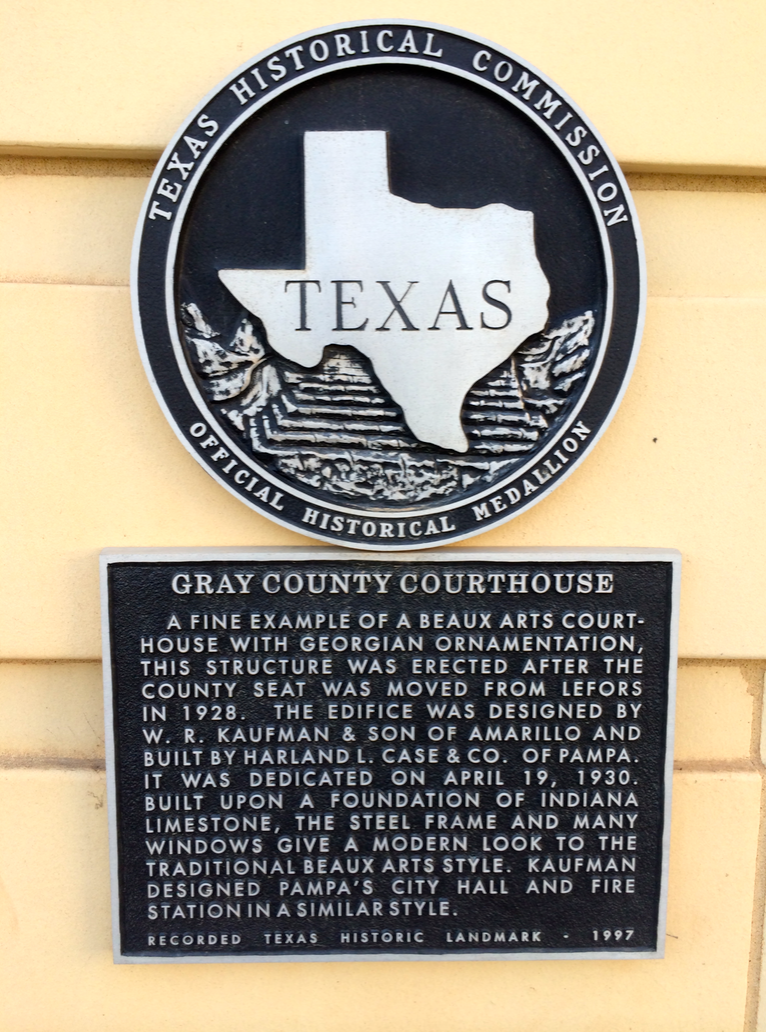 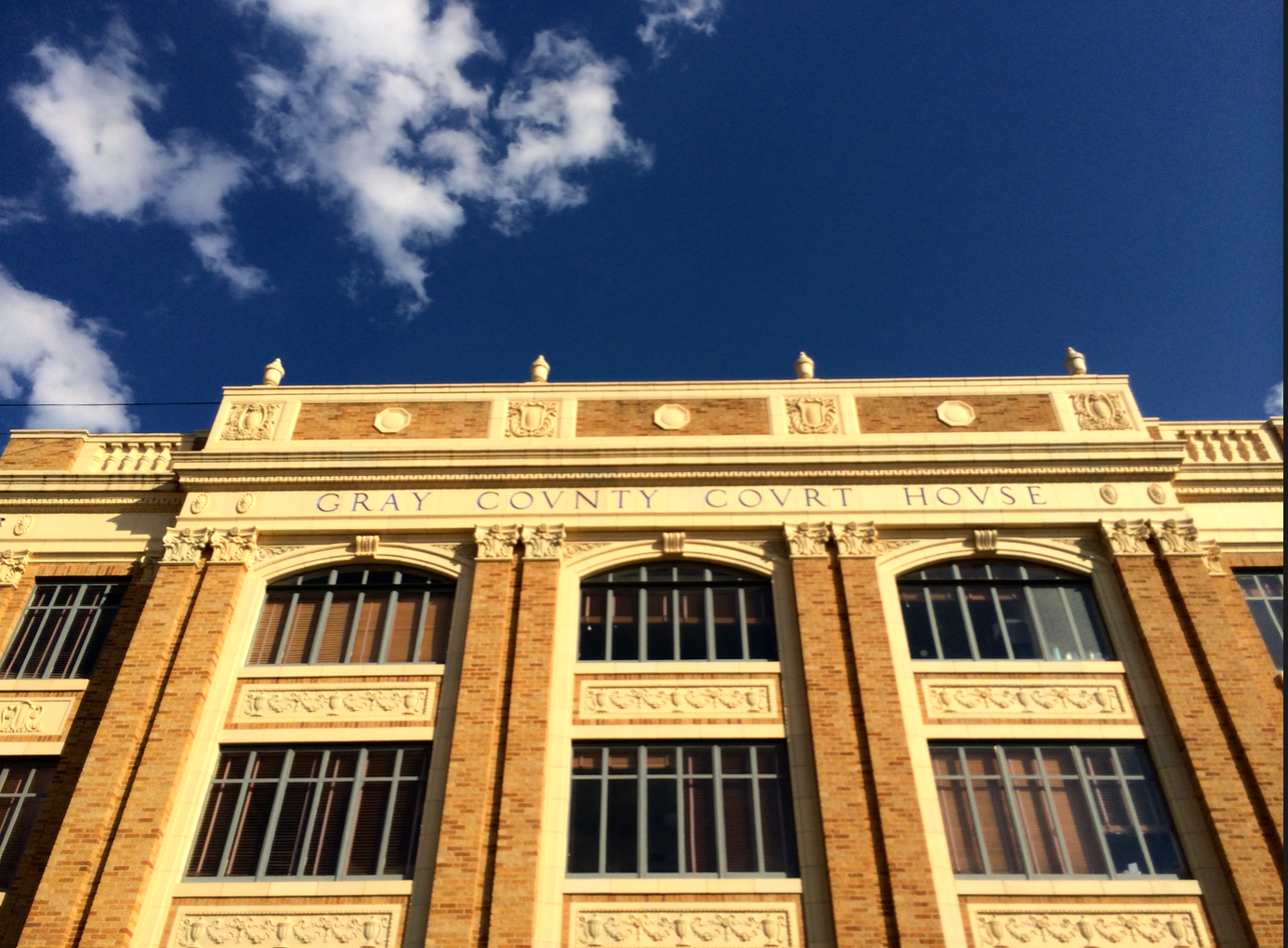 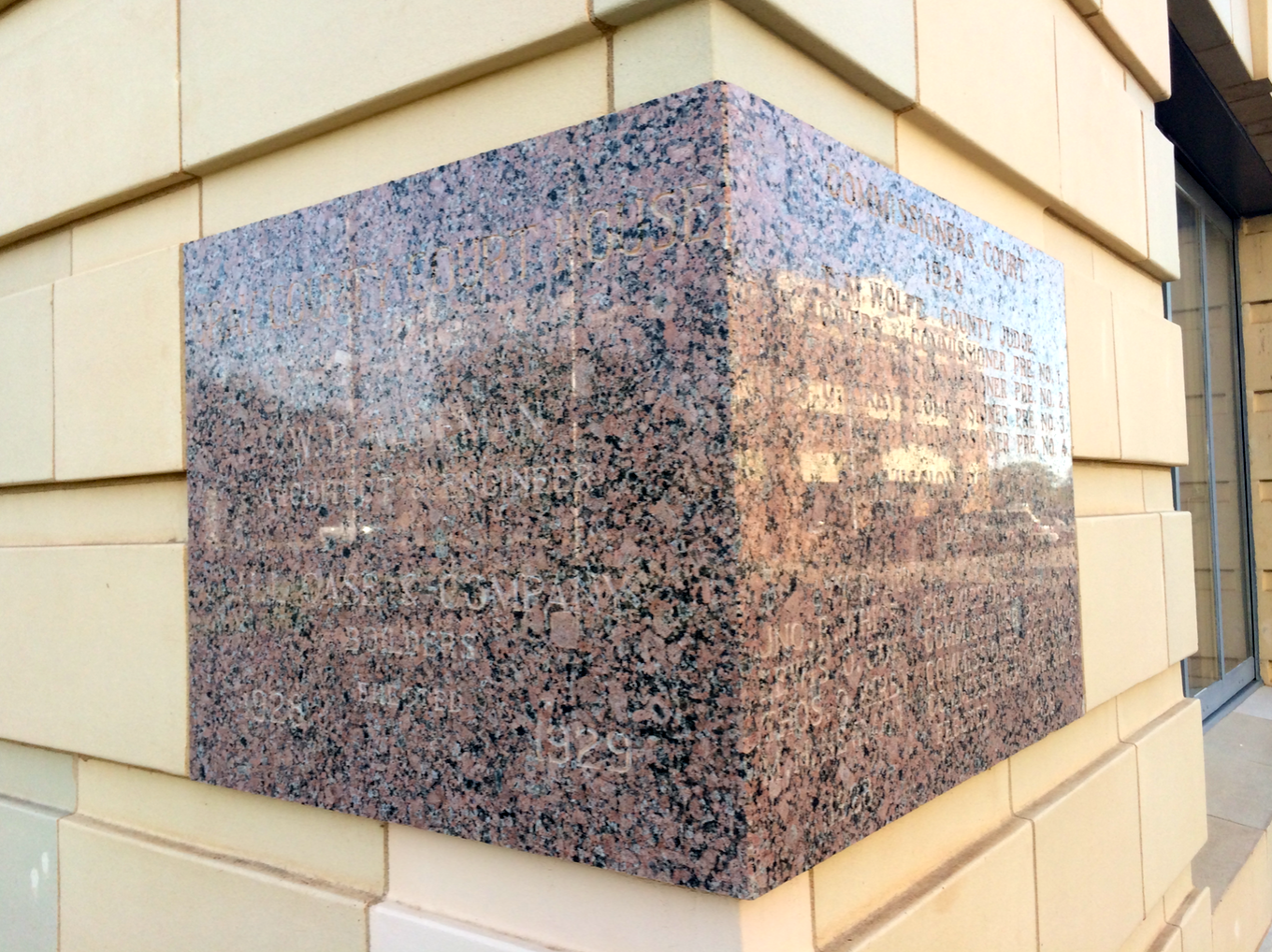 Within the glare of this granite cornerstone, once can just make out the Gray County Jail (opposite the courthouse on Russell Street). This is on the southeast corner. 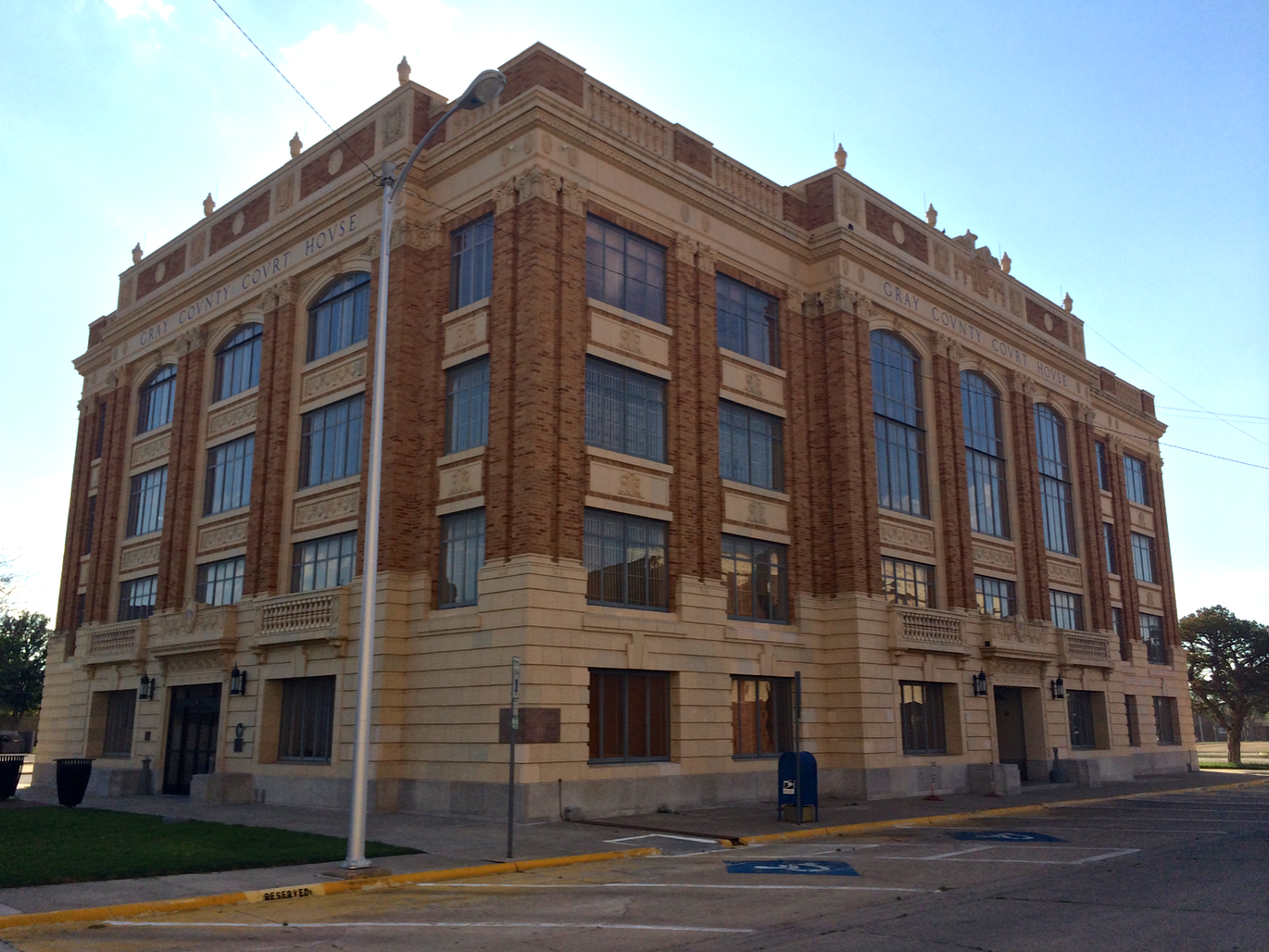 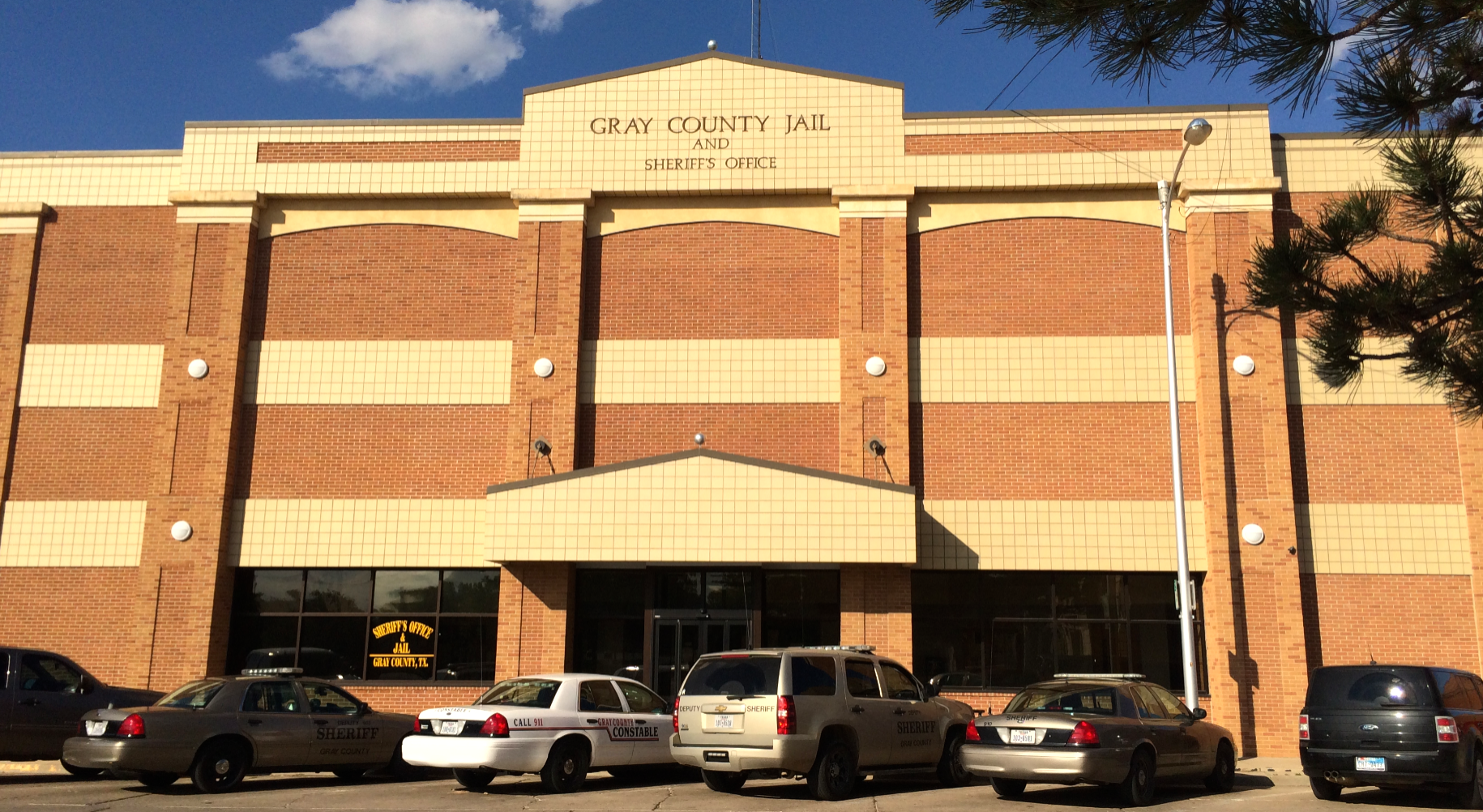 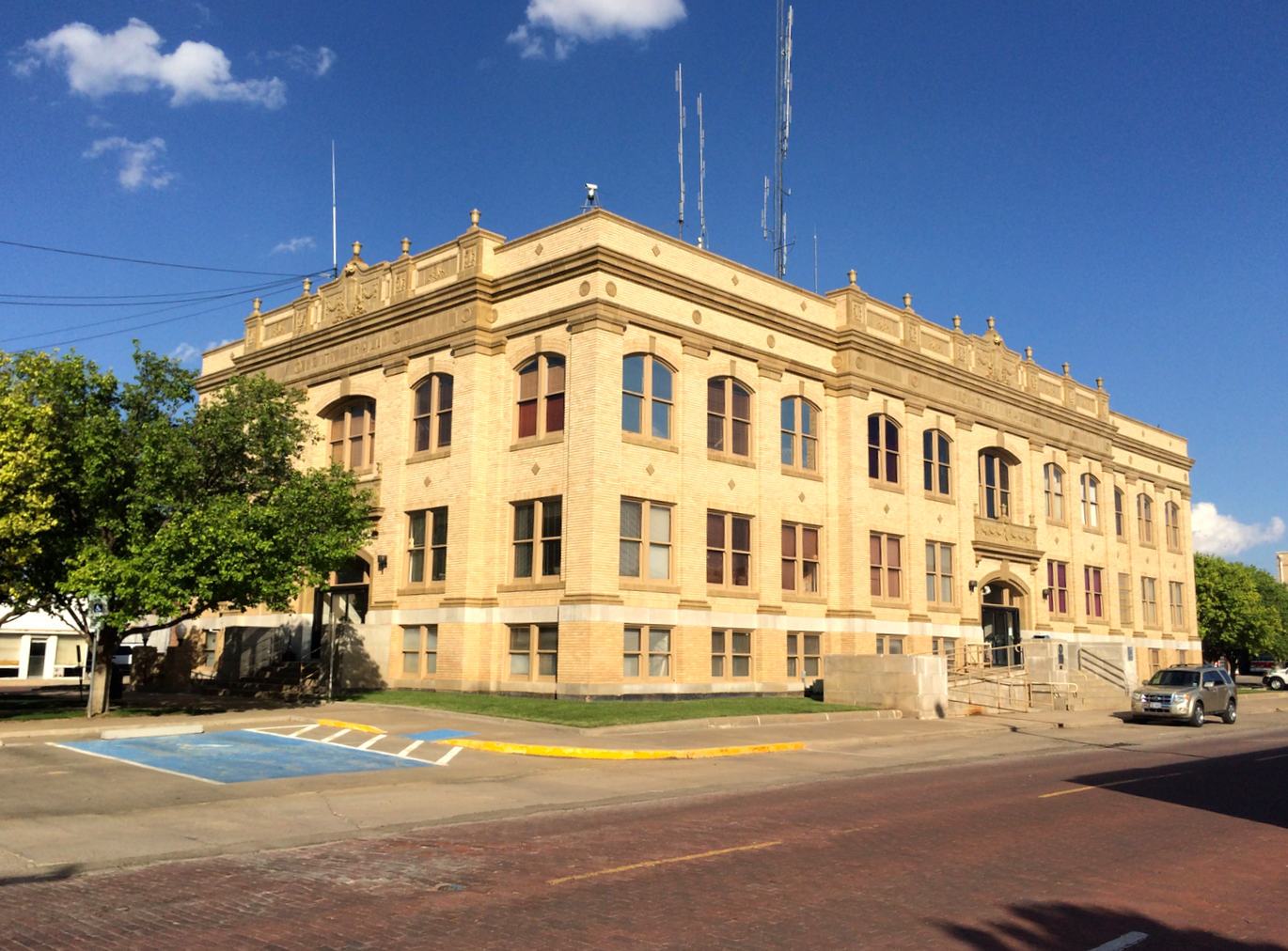 Like the courthouse and jail, Pampa City Hall is also an impressing building.