“In the eighteenth and nineteenth centuries, the abundance of wild fruits and herbs made this area a favorite haunt of Comanche and Kiowa bands, who frequently camped there during the winter as they followed the migrating buffalo herds.”

“The Comanche chief Peta Nocona staged several raids on white settlements from a favorite winter campground on the Pease River near its junction with Mule Creek; he paid the price on December 18, 1860, when Capt. Lawrence S. (Sul) Ross and his Texas Rangers attacked his camp and captured his wife, the white captive Cynthia Ann Parker, and her infant daughter. As Indian power was being broken during the 1870s, hide hunters came into the region on the “Buffalo Road” from Henrietta and points east and killed off the great herds that once roamed the region.”

“In 1891, Foard County was marked off from lands previously assigned to Cottle, King, Knox, and Hardeman County. Although Beaver County was the original name proposed, the county was named for Robert Foard because he was the law partner of an influential member of the committee that reported on the bill to establish the county.”

“Shortly after the county was authorized on March 3, 1891, the new townsites of Foard City and Crowell vied to become the county seat; a third townsite, Sandrock, was also a contender for a brief time. Crowell was chosen after an election on April 27, 1891. J. C. Roberts was elected county judge, G. W. Thompson county clerk, and S. J. Moore sheriff. Nine school districts were established.”

“In 1900 the United States census counted 1,568 residents in Foard County, which had 210 farms and ranches; according to the agricultural census,cotton culture occupied 1,982 acres in the county, corn culture 2,712 acres, and wheat culture 2,060 acres. Almost 38,000 cattle were counted in Foard County that year. The county’s development accelerated after 1908, when the Kansas, Mexico and Orient Railway built tracks from Knox City and Benjamin through Foard County to Chillicothe and established depots at Foard City, Crowell, and Margaret.”

“By 1910, 718 farms and ranches had been established in Foard County, and the county’s population had risen to 5,726. More than 21,300 acres in the county was planted in cotton that year, 9,100 acres in corn, and almost 6,700 acres in wheat. Meanwhile, local farmers were also establishing orchards; by 1910 more than 10,000 fruit trees (mostly peach) were cultivated in the county. Cattle ranching continued to be a significant part of the local economy, but since 1900 had declined in importance in both real and relative terms; in 1910, only about 16,000 cattle were counted in the county.”

“Droughts and other adversities reduced crop production and drove some farmers off their lands in the second decade of the twentieth century; by 1920 the number of farms in Foard County county had dropped to 629, and the population had declined to 4,724. Thanks to an increase in cotton production during the 1920s, the county recovered somewhat during that decade. Cotton acreage expanded to more than 58,500 acres by 1929, and by that year the number of farms in the county had again increased to 720; by 1930 Foard County had a population of 6,315.”

“Agriculture suffered serious setbacks during the 1930s, however, because of the Great Depression and the concurrent Dust Bowl. Cotton production plunged by more than 50 percent, and by 1940 only 24,098 acres of Foard county was planted in the fiber; wheat production also dropped from about 33,400 acres in 1929 to about 24,100 acres in 1940. More than 15 percent of the county’s farmers were forced out of business during this period, and by 1940 only 561 farms remained.”

“Although oil leases in Foard County had been sold as early as 1901, no actual discoveries were made until 1925, when the Thalia field was first drilled; the boom there started in 1929, when the Shell Petroleum Company struck a pool that yielded 500 barrels a day. Beginning in 1933 the Texas Company (Texaco) discovered the county’s largest oil and gas field twenty miles west of Crowell. In March 1934 a $150,000 natural gas stripping plant was built at the field, with a three-inch pipeline laid from there to the railroad tracks at Foard City.”

“Crowell is the county’s largest town and the county seat. Although the town was devastated by a tornado on April 27, 1942, it recovered quickly and remains the center of the county’s agribusiness and oil economy; Foard County’s sole newspaper, the Foard County News, is published in the town. Other communities include Margaret, Vivian, Foard City, and Rayland.” 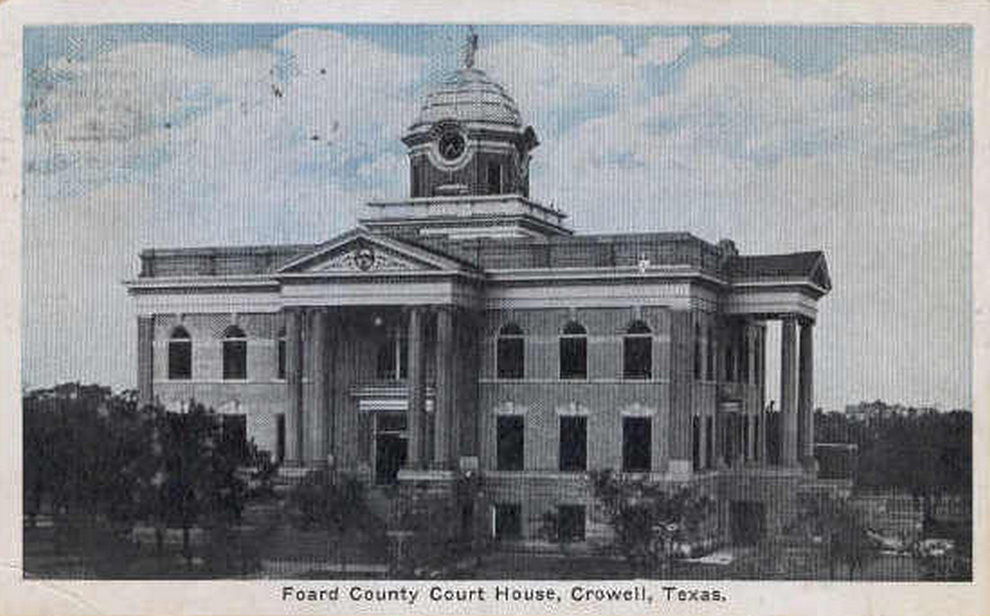 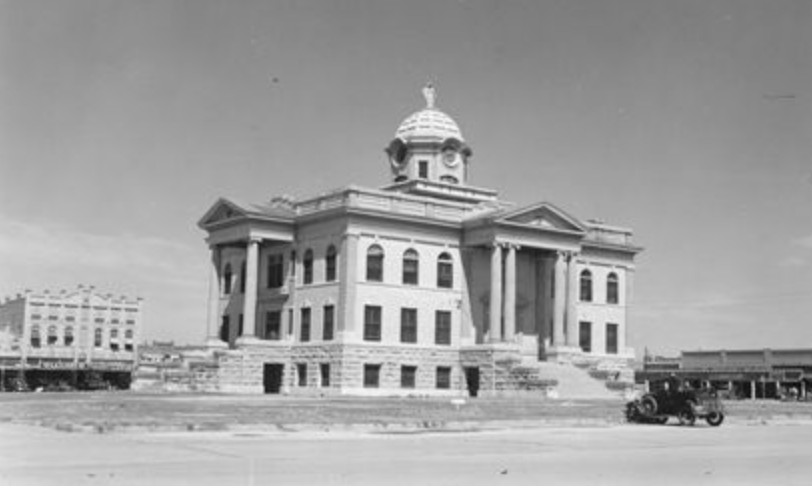 A two-story, wooden frame courthouse was the first to sit on the Crowell square. The Mathis & Adams firm was responsible for its construction, following designs that were most likely their own. It was completed in 1891, but demolished in 1910.

A year before, county citizens had voted in a bond election for the creation of a much larger, more spacious courthouse. Commissioners duly selected Fort Worth architect Elmer G. Withers to design their new court building, R.H. Stuckey to serve as superintendent, and G.W. Brillhart of Abilene as its contractor. The Texas Historical Commission describes this courthouse as follows:

“This three story buff brick and limestone courthouse was originally constructed with a central dome and clock tower. Classical details include pilasters, flattened entablature with roof parapet, flat arched windows on the rusticated limestone main floor and round arches on the top floor accented with large keystones.”

On April 28, 1942, a devastating tornado ripped through Crowell at approximately 8:40 PM (the time the clock hands froze). With eleven fatalities, 125 injuries, and over 1500 newly homeless, Foard County appealed to the Red Cross, National Guard, and Civilian Conservation Corps for aid.

And thankfully, aid came. Once Crowell was able to shakily stand back up on its own feet, subsequent remodel efforts began on the Foard County Courthouse. The tornado had removed the dome, cupola, porticoes, and columns, ripping away nearly ever key stylistic element of Withers’ Classical Revival design. The building’s structure was repaired, but they were never restored. 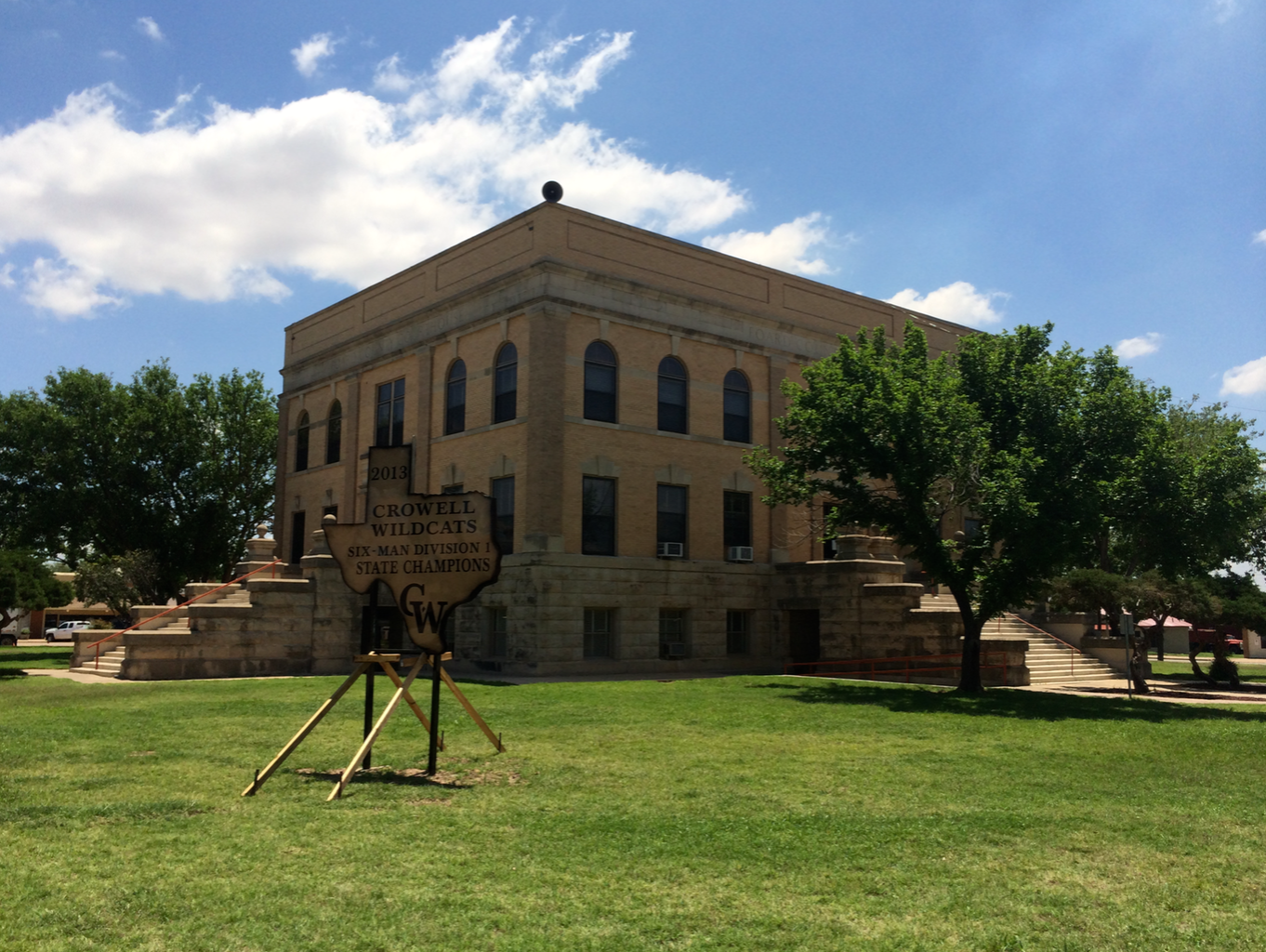 What remains of Wither’s Foard County Courthouse today. Compare this to the historical photos above and notice which parts still stand. 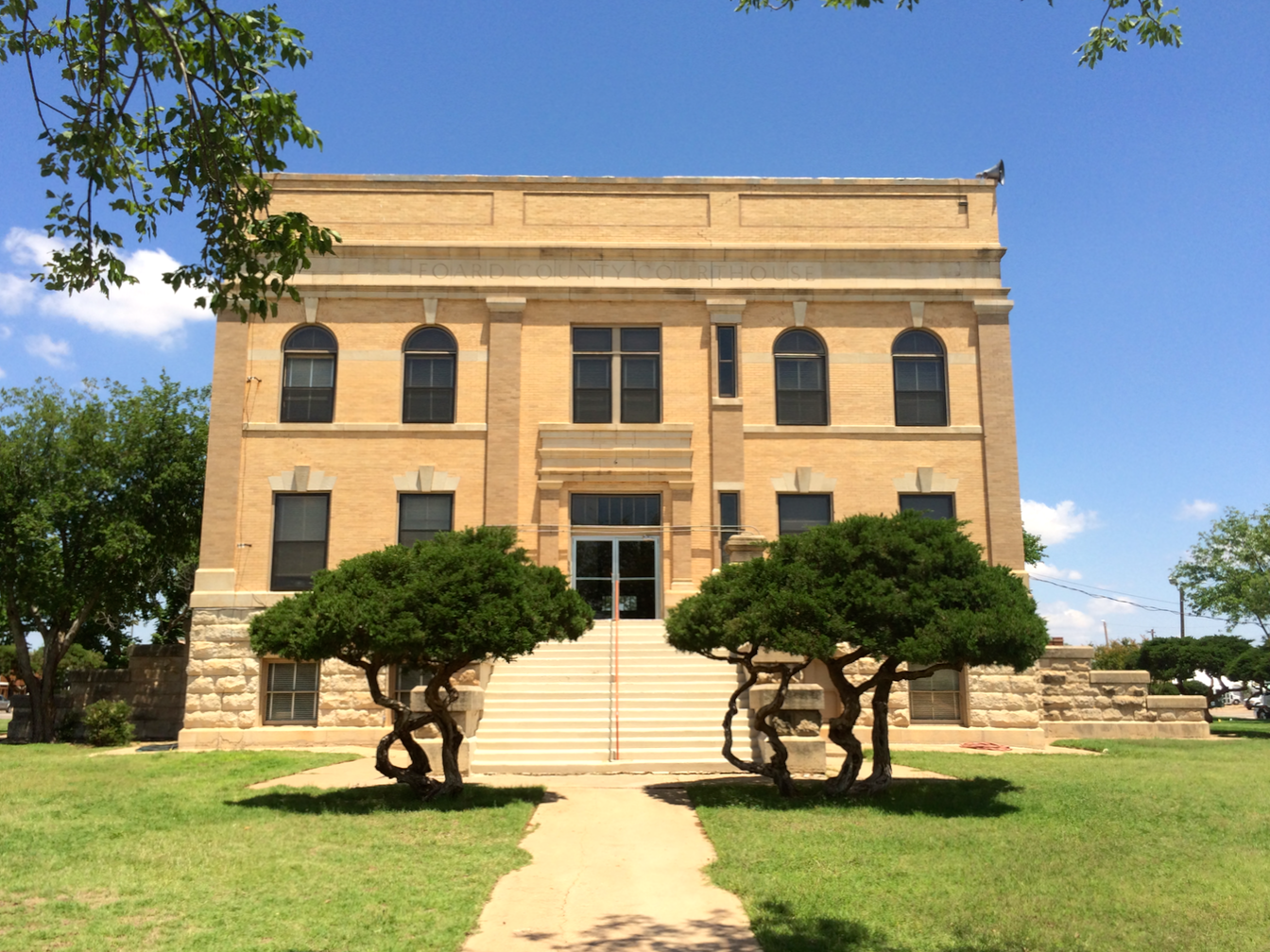 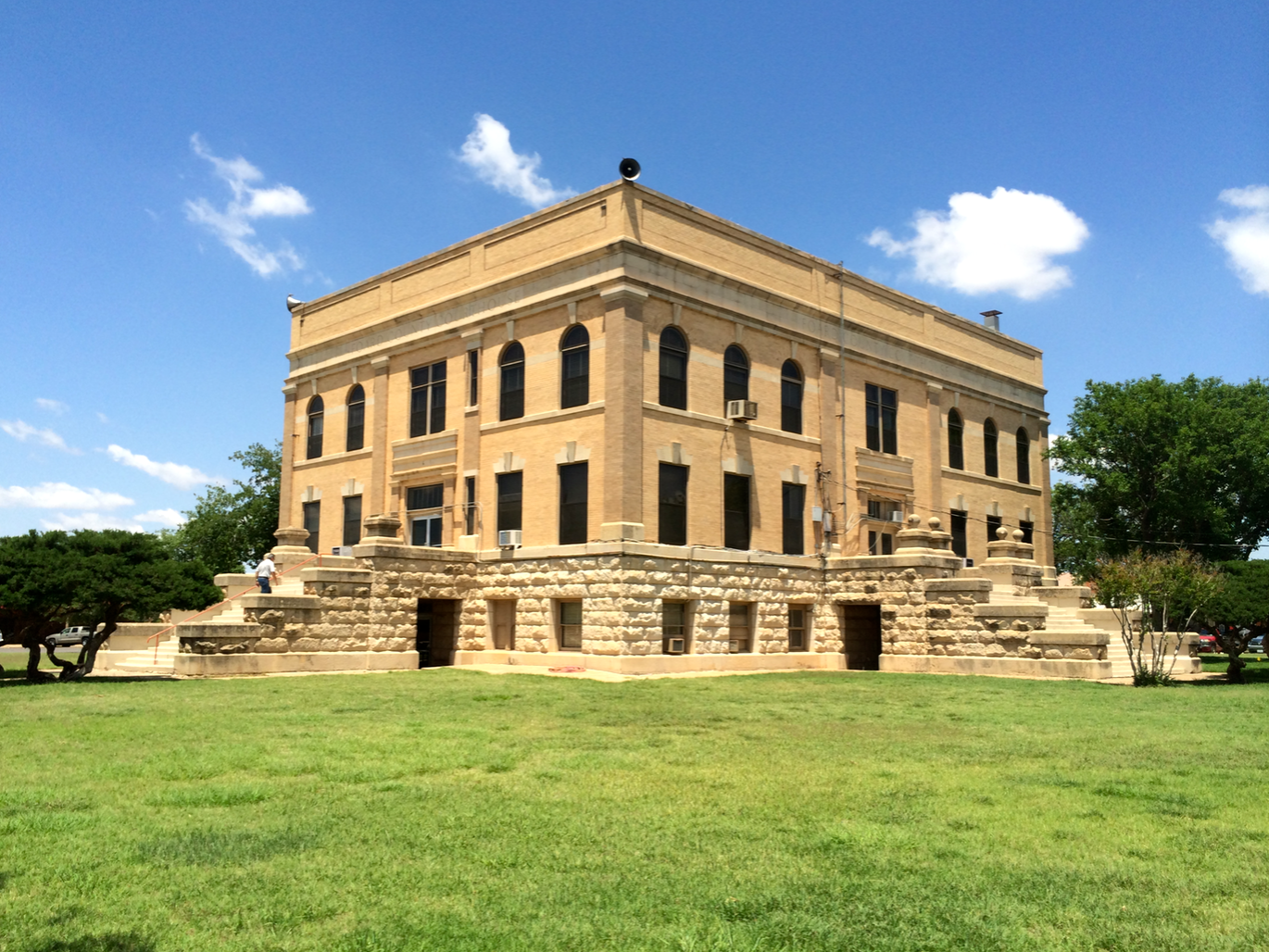 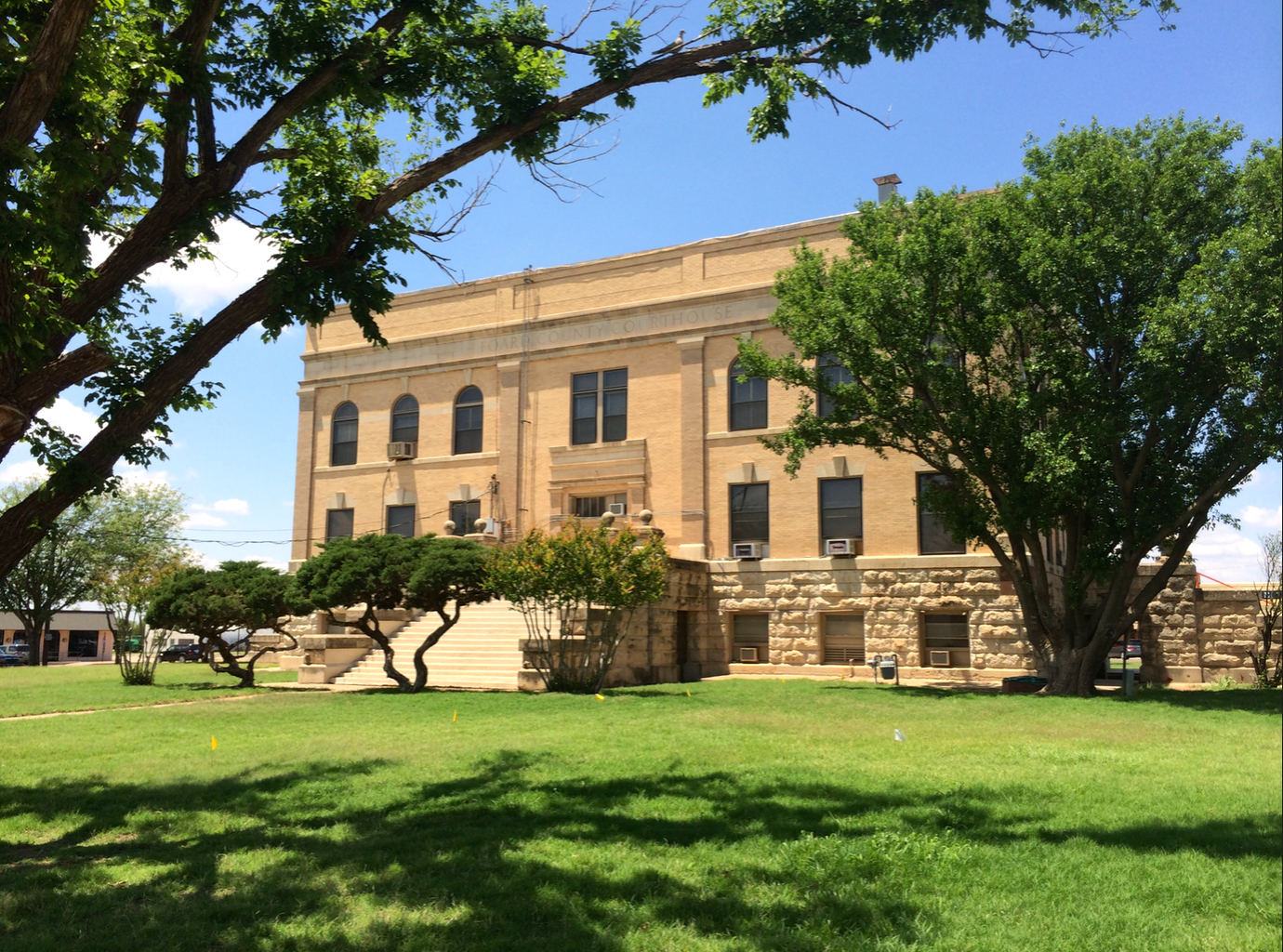 The eastern façade, on 1st Street 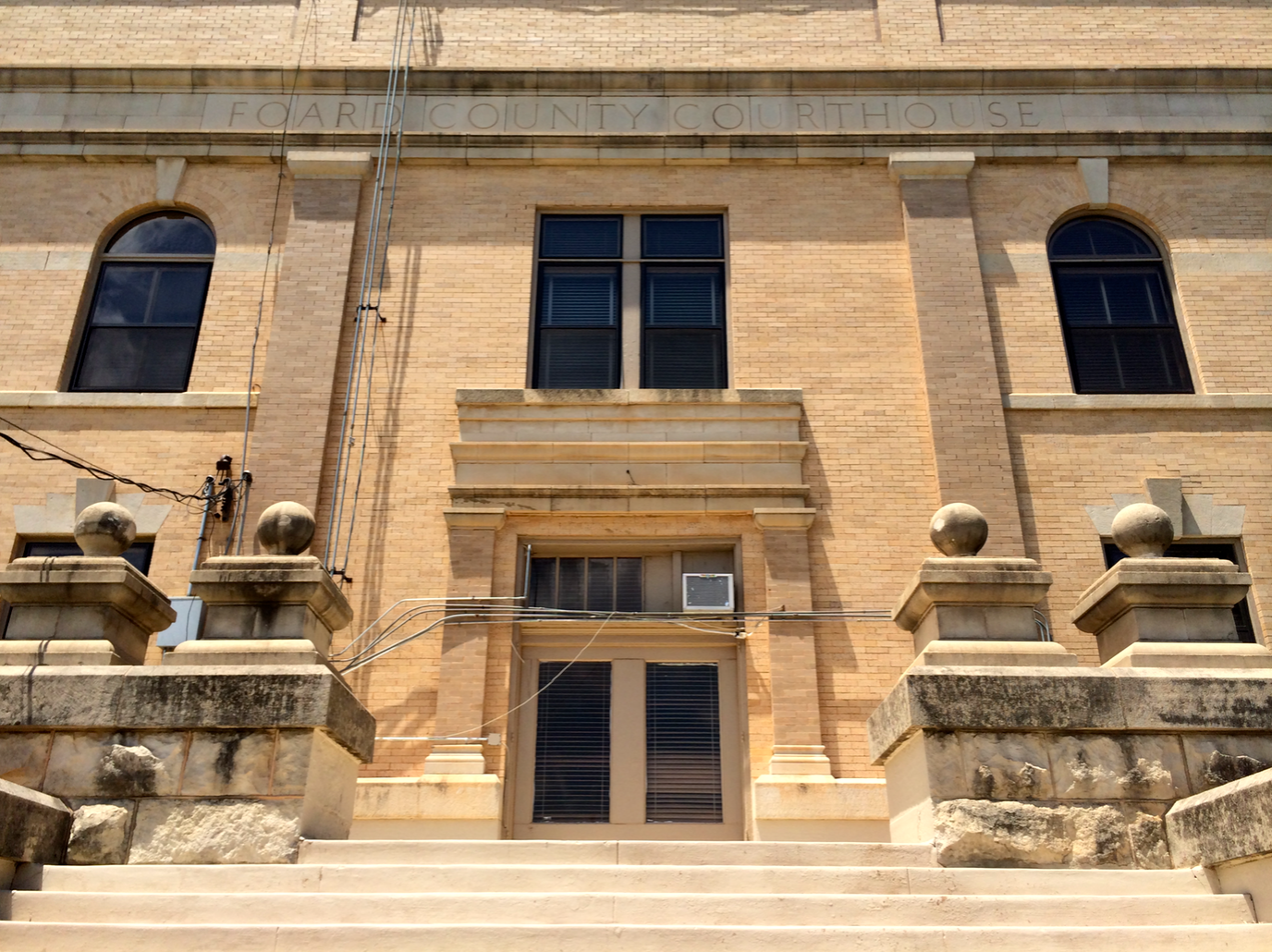 This entrance is no longer an entrance.

Stone spheres mark the locations of the columns that once were.

The view from the eastern steps 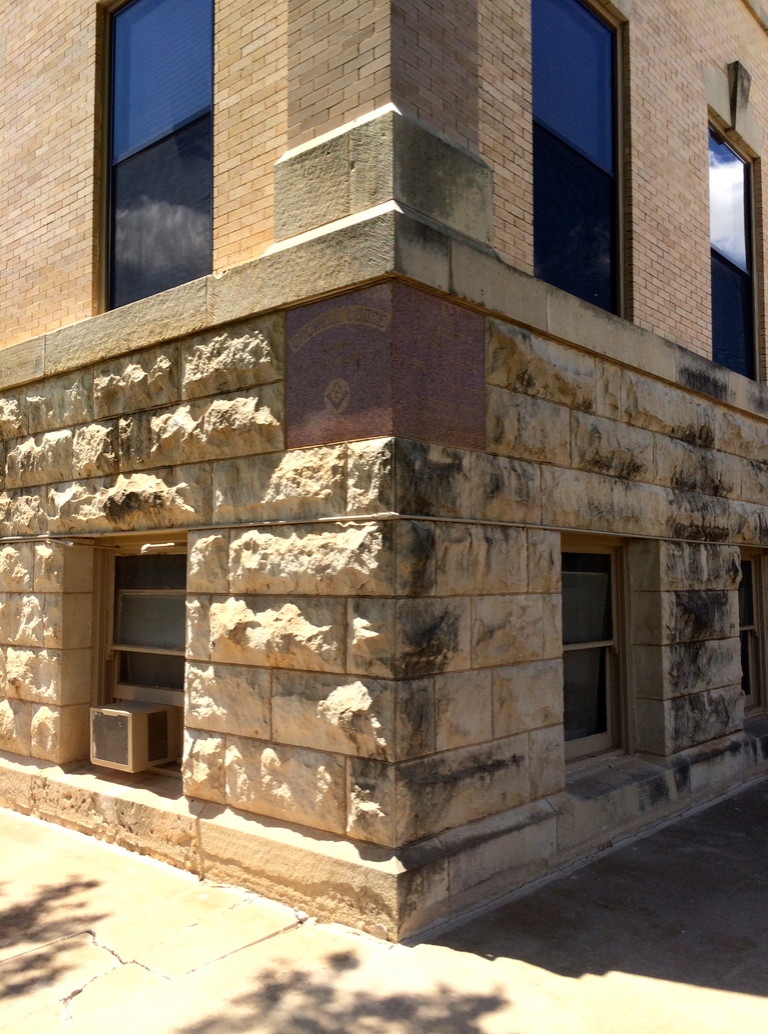 The northeast corner holds the cornerstone. 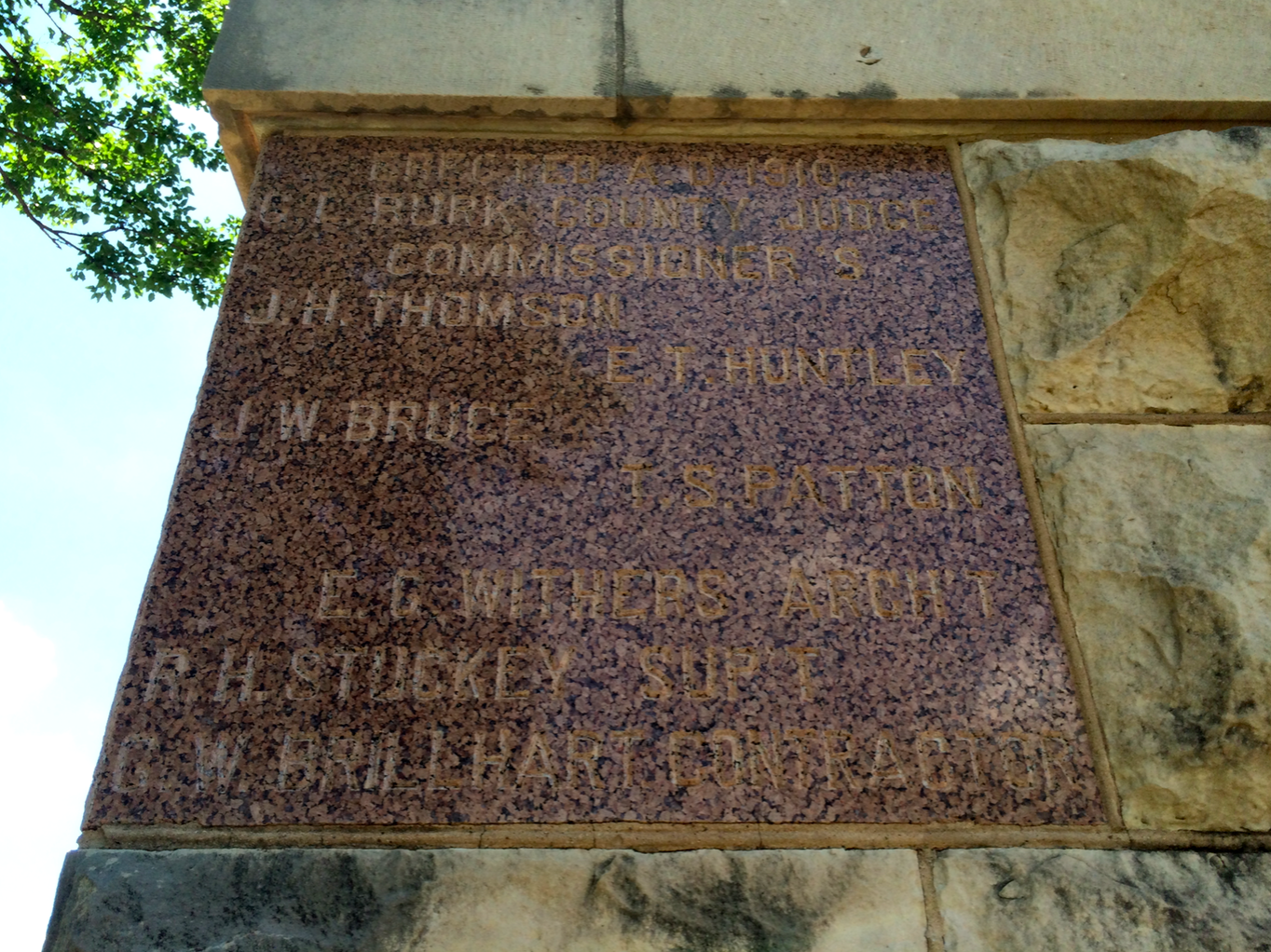 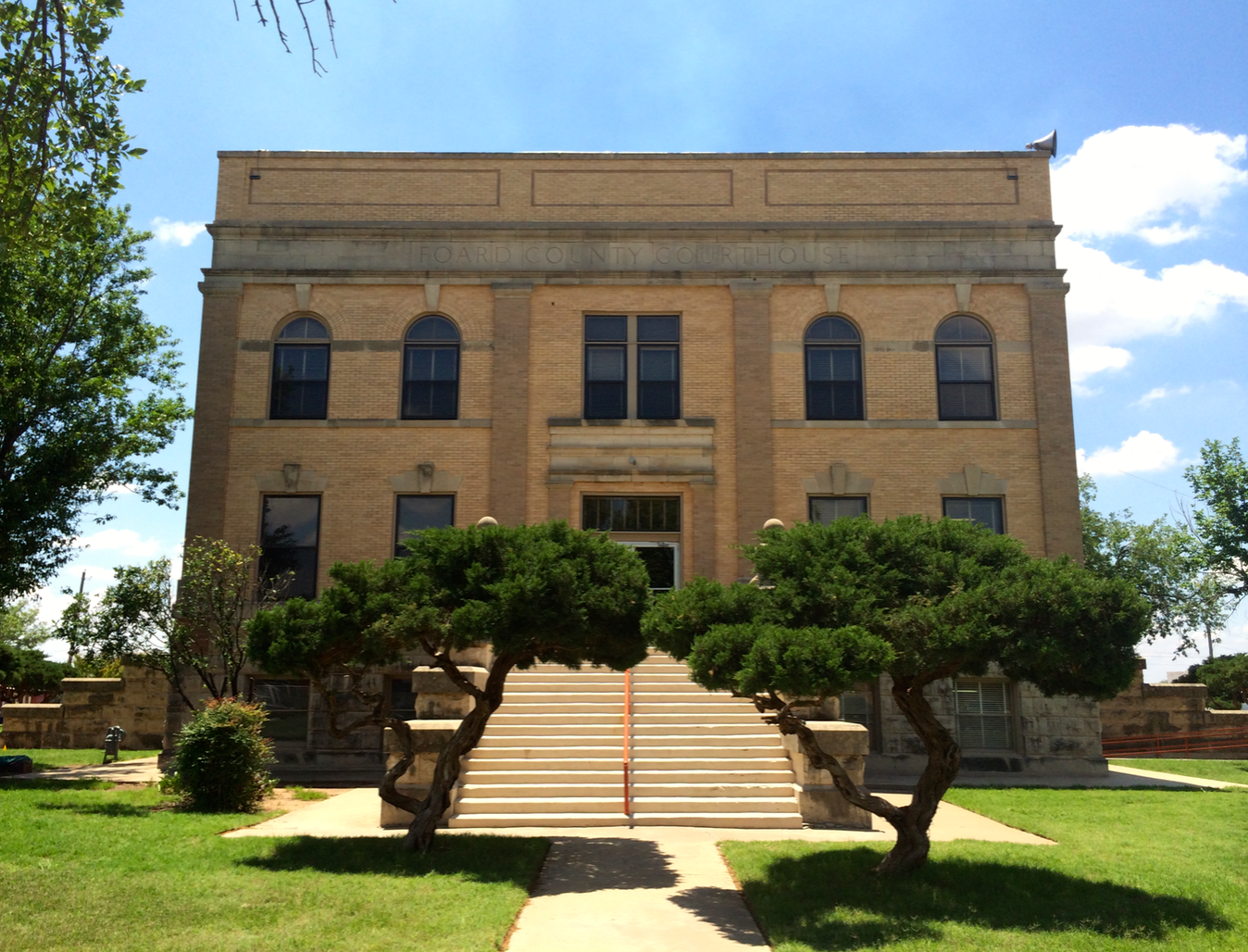 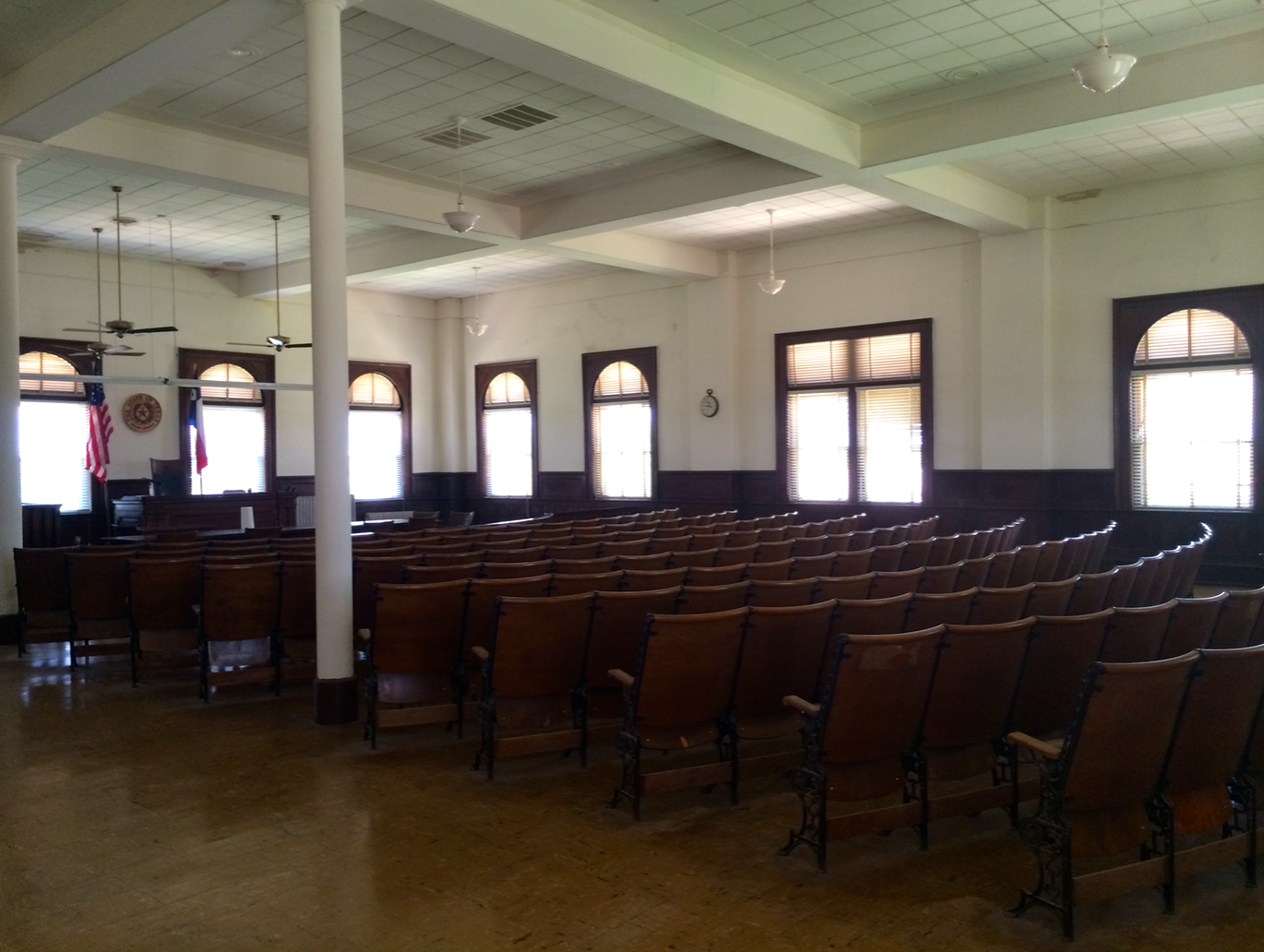 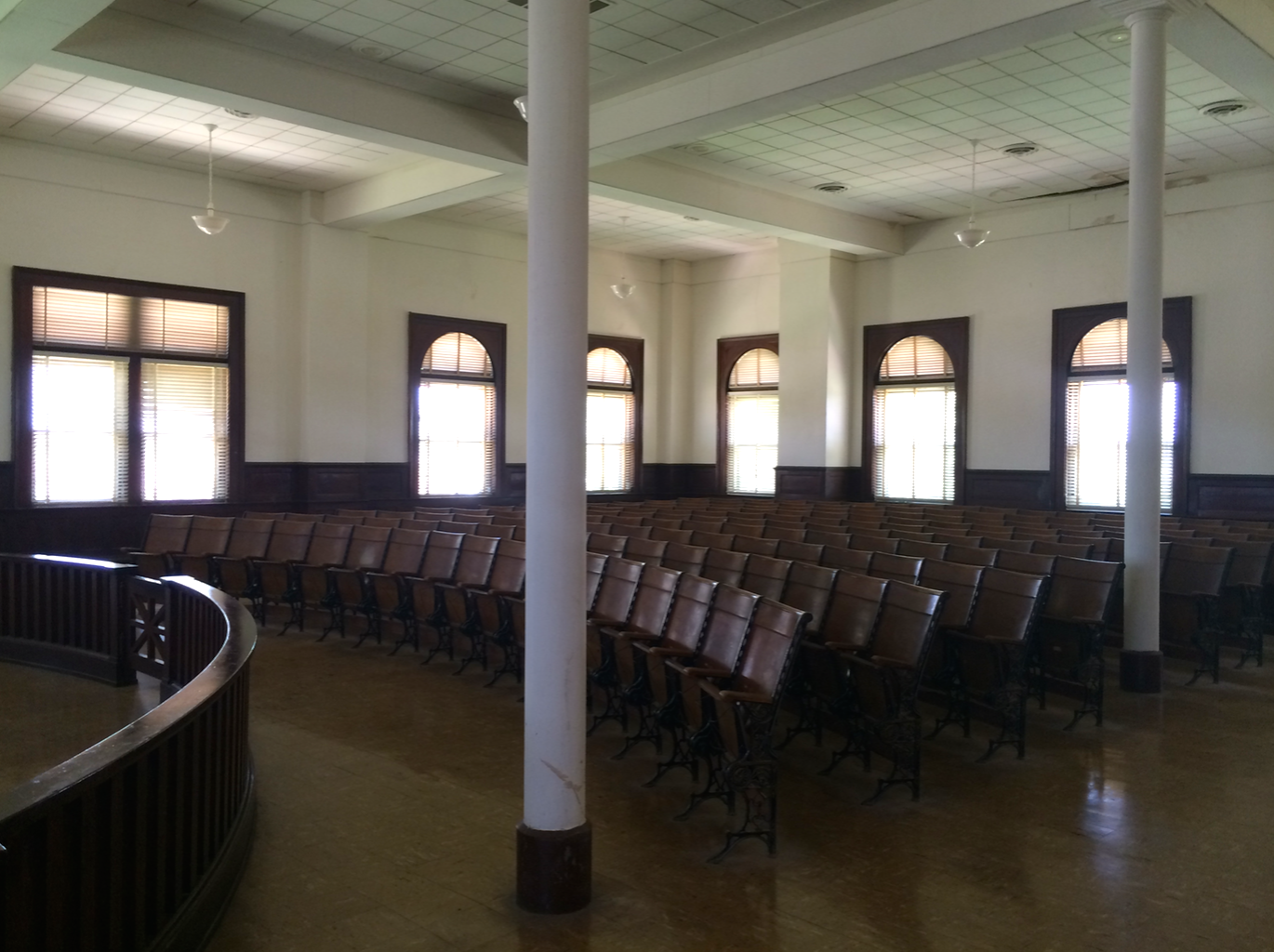 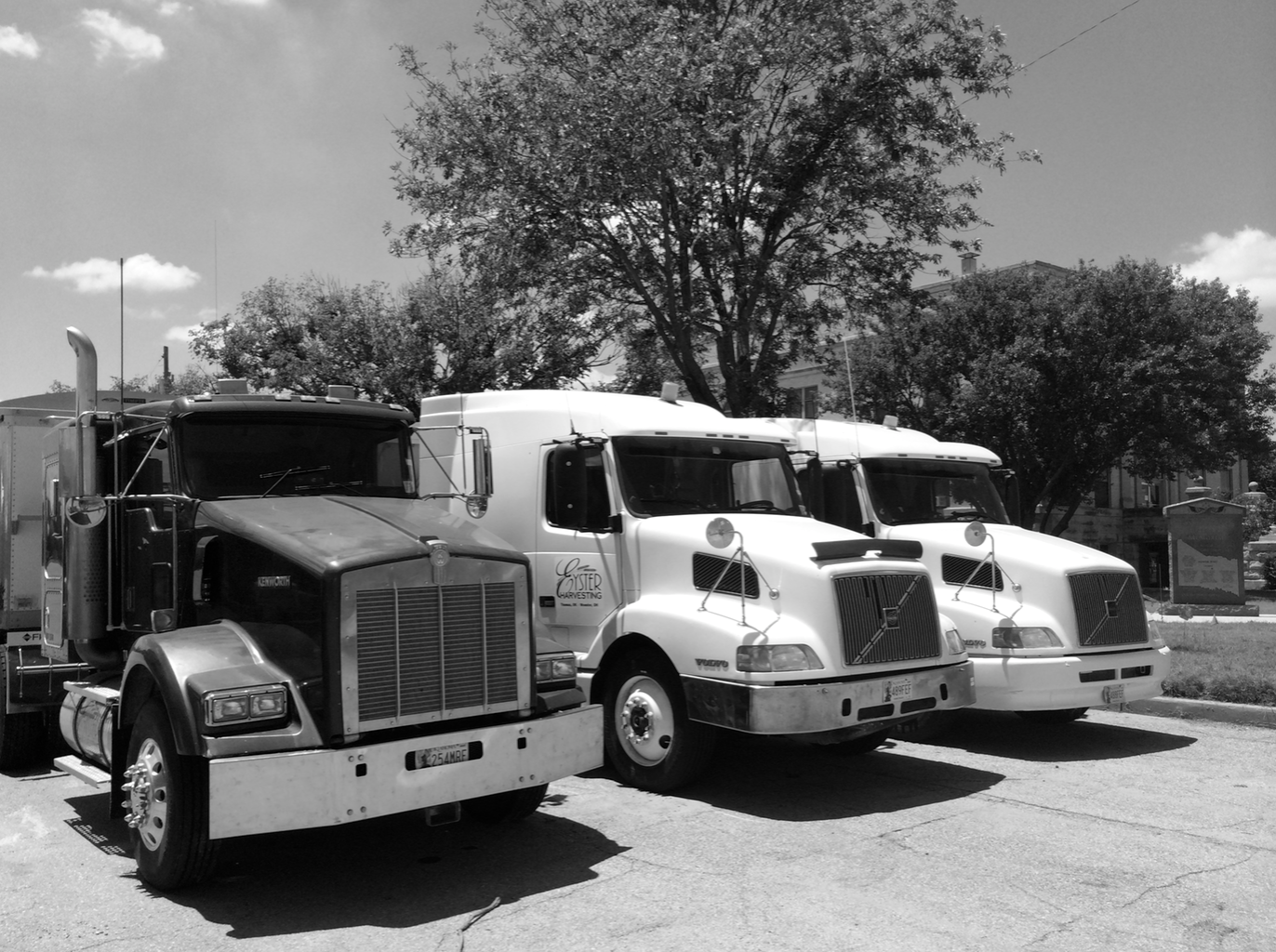 The courthouse can be seen behind several large trucks from this vantage point on 1st Street. This area has its fair share of eight-wheeler traffic. 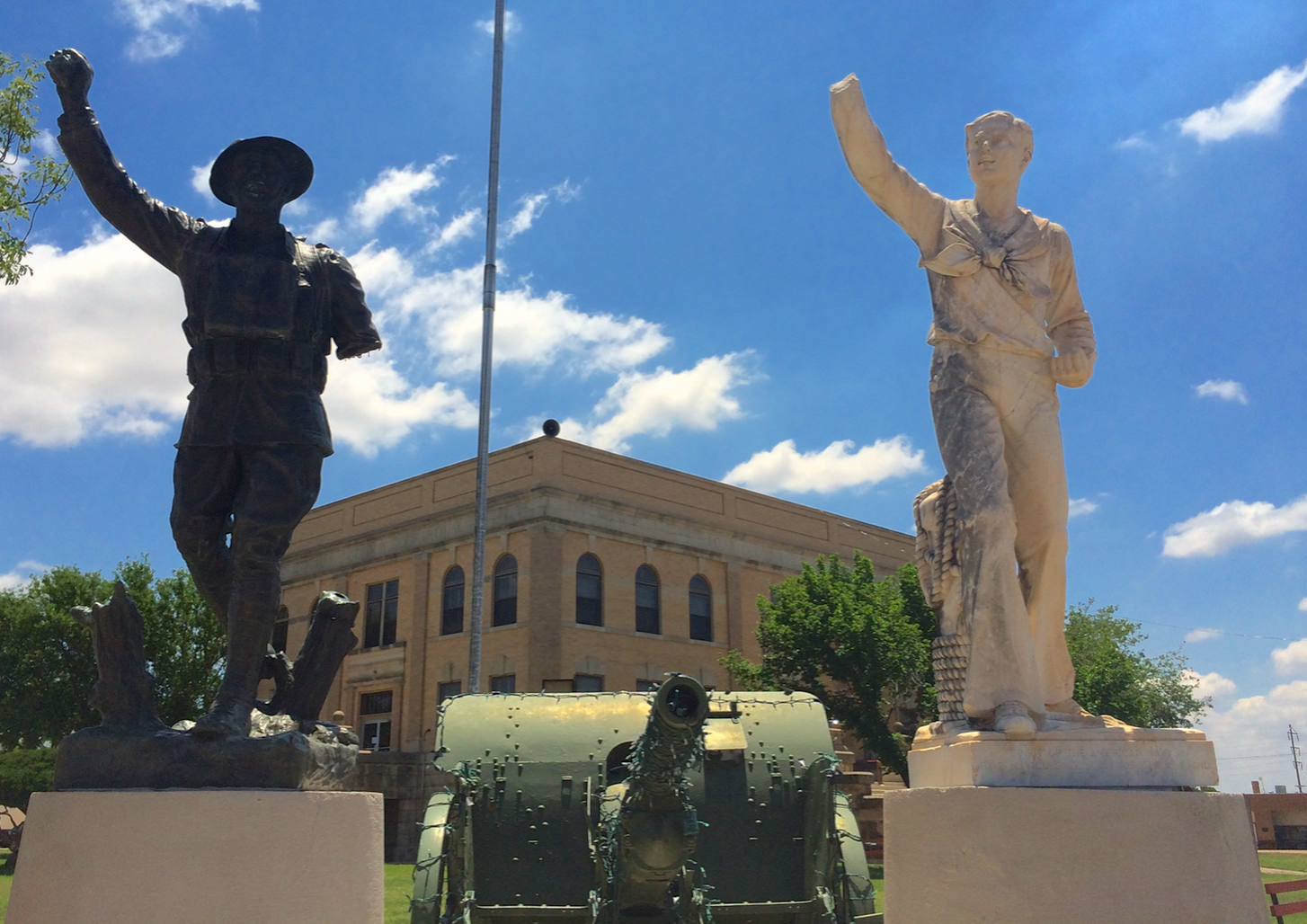 Two veterans’ memorials mark the northwest corner of the courthouse lawn. Interestingly enough, both statues are missing the opposite hand. This damage came from the 1942 tornado. 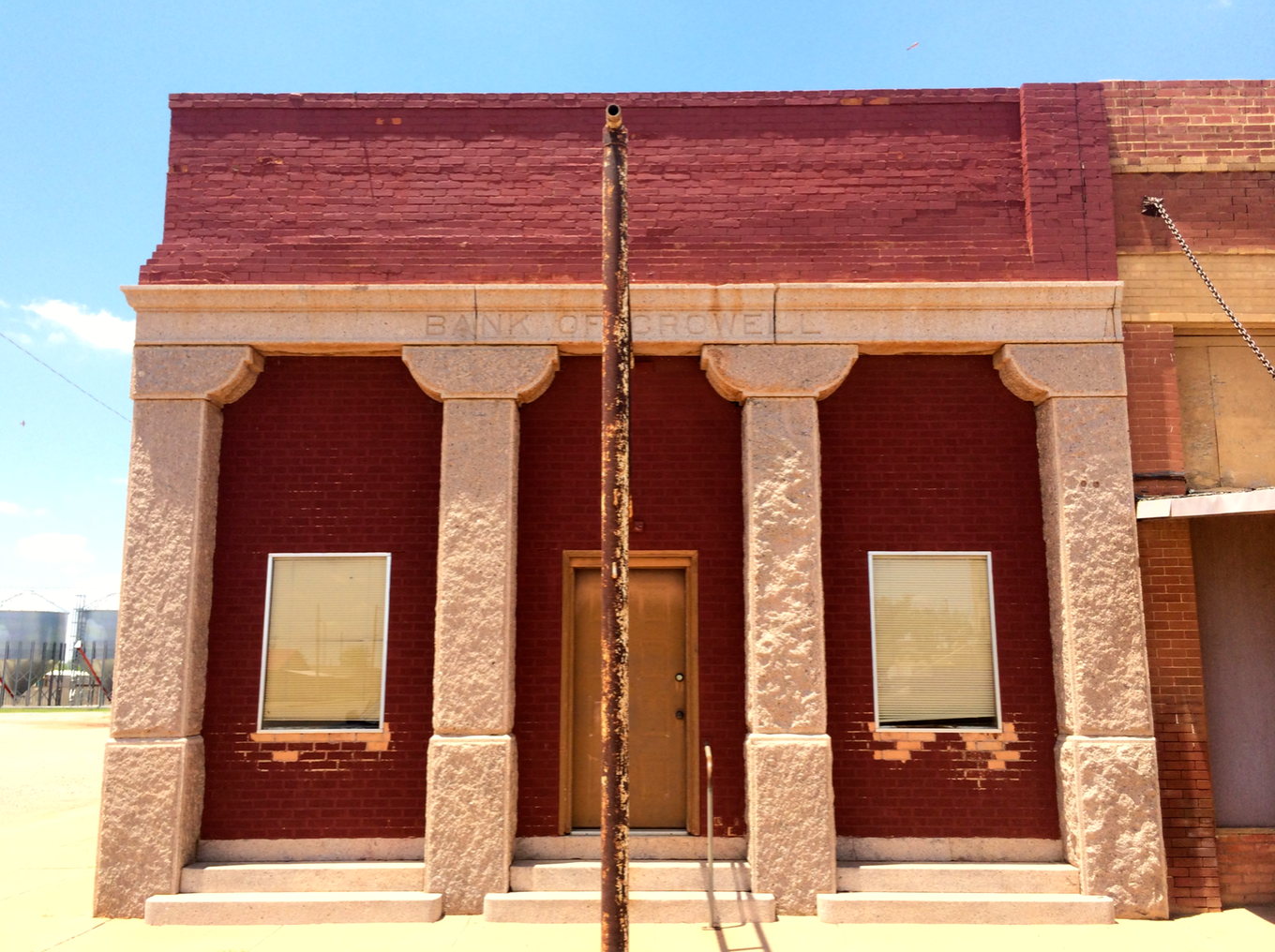 The Bank of Crowell Building, on Main Street

Also on Main Street is another unique storefront.