“Martin County, on the southern High Plains of west Central Texas, comprises 911 square miles and is bounded on the north by Dawson County, on the west by Andrews County, on the east by Howard County, and on the South by Midland and Glasscock counties.”

“Comanche Indians displaced Lipan Apaches in the region in the mid-eighteenth century and were in turn forced out by the United States Army after the Civil War. Martin County was formed on August 21, 1876, from Bexar County and named for Wylie Martin, one of Stephen F. Austin‘s Old Three Hundred colonists.”

“Martin County was attached to Mitchell County for administrative purposes for five months and then attached to Howard County until 1884, when the county was reduced to its present size and organized with Mariensfield (now Stanton) as the county seat. The first white settlement in what is now Martin County was Grelton (later known as Mariensfield), which was established in 1881 by John Konz and his family under the sponsorship of the Texas and Pacific Railway. Railroad promotion was a key element in attracting settlers to West Texas.”

“The region was pleasing in appearance and well watered by springs, including Mustang Pond, where United States Army officers had once observed Indians watering 1,000 mustangs. “This beautiful country,” said one pioneer, “was just a lush garden with green plums, prairie chicken, and quail galore.” In 1881 the Texas and Pacific line began service to its lands in the Martin County area, which it sold to settlers for $1.50 to two dollars per acre. The drought of 1886 almost depopulated the nascent community.”

“Settlers planted grain, cotton, vegetables, vines, and orchards and hunted antelope, deer, quail, and the few buffalo still remaining, to become self-sustaining. Cattle and, especially, sheep were introduced in greater numbers in the mid-1880s to utilize range not already preempted by Christopher C. Slaughter and others who had run cattle since 1877. Slaughter’s 37,500 section Lazy S Ranch extended into Martin County and had its headquarters at Mustang Spring.” 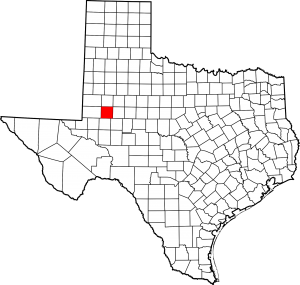 “Immigration to the area intensified after Konz encouraged a group of Carmelite priests from Anderson County to move to Martin County to establish a monastery. The name of the original settlement, Grelton, was changed to Mariensfield (Field of Mary) by German settlers from Anderson County. Encouraged by Christian D. (Father Anastasius) Peters, immigrants also moved to Martin County directly from Germany. The first Catholic Mass in the county was celebrated on the site of the present county courthouse.”

“By 1890, when Mariensfield’s name was changed to Stanton, the area had a much more settled character than it had only ten years earlier. In 1880 only twelve people lived in the county; by 1890 the population had risen to 262, and by 1900 332 people were living in Martin County. By 1905 Stanton had become a major shipping point in the region; ranchers from as distant as 150 miles to the south drove herds there. In the early twentieth century Martin County prospered and received a new wave of settlers, as land promoters subdivided cattle range into farmsites, and a railroad connection to the north, passing through Lamesa, was constructed.”

“The Great Depression years of the 1930s were difficult for farmers, although the Bankhead Cotton Control Act of 1934 and the Soil Conservation Act helped stabilize the market, and the Domestic Act of 1936 provided incentives for soil conservation. Other federal relief measures may have contributed to survival, if not prosperity, through the 1930s. The World War II years were prosperous. The small irrigated section of the county was increased dramatically, and within ten years Martin County had 20,000 acres of farmland irrigated by sprinklers and another 2,500 in flood irrigation. The yield on each irrigated acre of cotton land was 1½ bales, compared with one bale for nonirrigated land.”

“Petroleum development was late in coming to Martin County. There was some drilling in the early 1920s, and a producing well was drilled in 1945, when the shallow Mabee field in Andrews County was extended into southwestern Martin County. The first commercial petroleum production occurred in 1950, when the Texas Company drilled over 13,000 feet into the northwest section of the county; more than 90,000 barrels of oil were produced in the county that year.”

“In 1951 three additional fields were located: Glass in the southwest, Breedlove in the northwest, and Stanton in the southwest. Petroleum production quickly became an important part of Martin County’s economy.”

“Stanton (2,847) is the largest town in the county. Other communities are Ackerly (232, partly in Dawson County), Lenorah, Flower Grove, and Tarzan.”

(Photo Courtesy: historictexas.net) (This is the building while under construction). 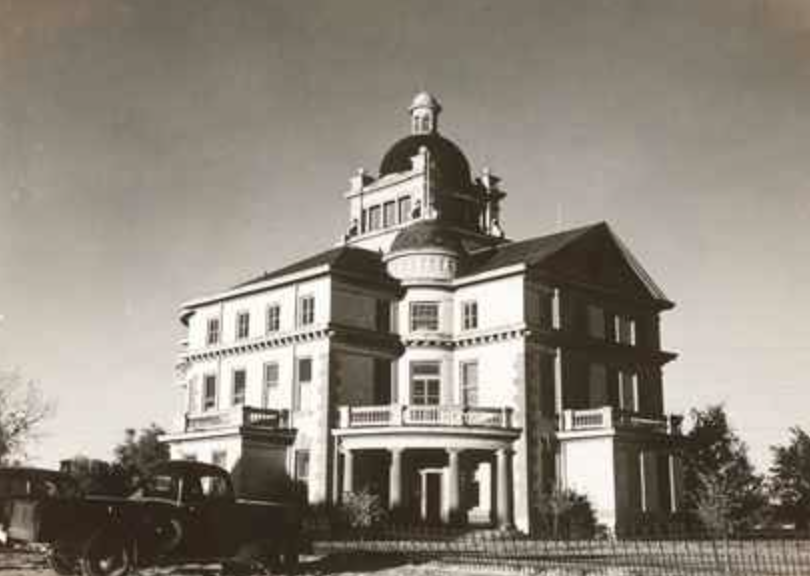 After both the Great Depression and the height of the modernization crazes of the 1950s and Sixties, this courthouse was left as arguably one of the most imposing and aesthetically pleasing courthouses in all of West Texas (excluding the Trans-Pecos region). It had survived all of its remarkable contemporaries, a feat unmatched by any other in-use courthouse in any county surrounding Martin County.

That’s why it is a bitter shame that county officials decided to demolish it as late as 1970. Architect A.J. Olson’s striking, brick, Classical Revival courthouse came down that year, marking the extinction of corner-entry courthouses (a la J. Riely Gordon) anywhere west of New Braunfels.

It’s not immediately clear why the building was demolished, but I can only surmise that the curse of modernization had infected Martin County. 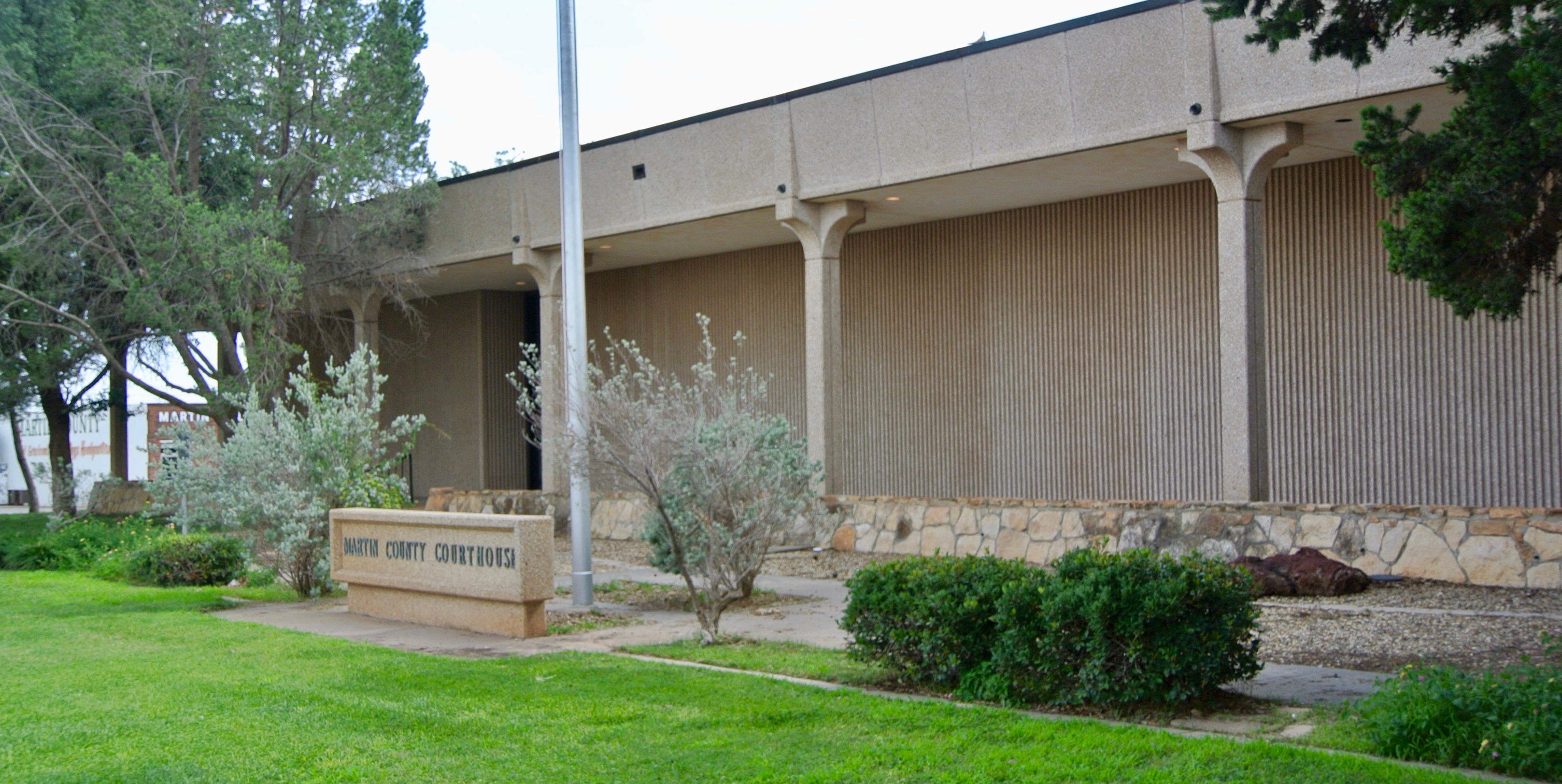 Riherd & Huckabee paired up to design this concrete wonder. I can’t tell you much more, because I don’t any more. But to tell you the truth, even if I did, I don’t think I would. My sympathies to the people of Martin County. 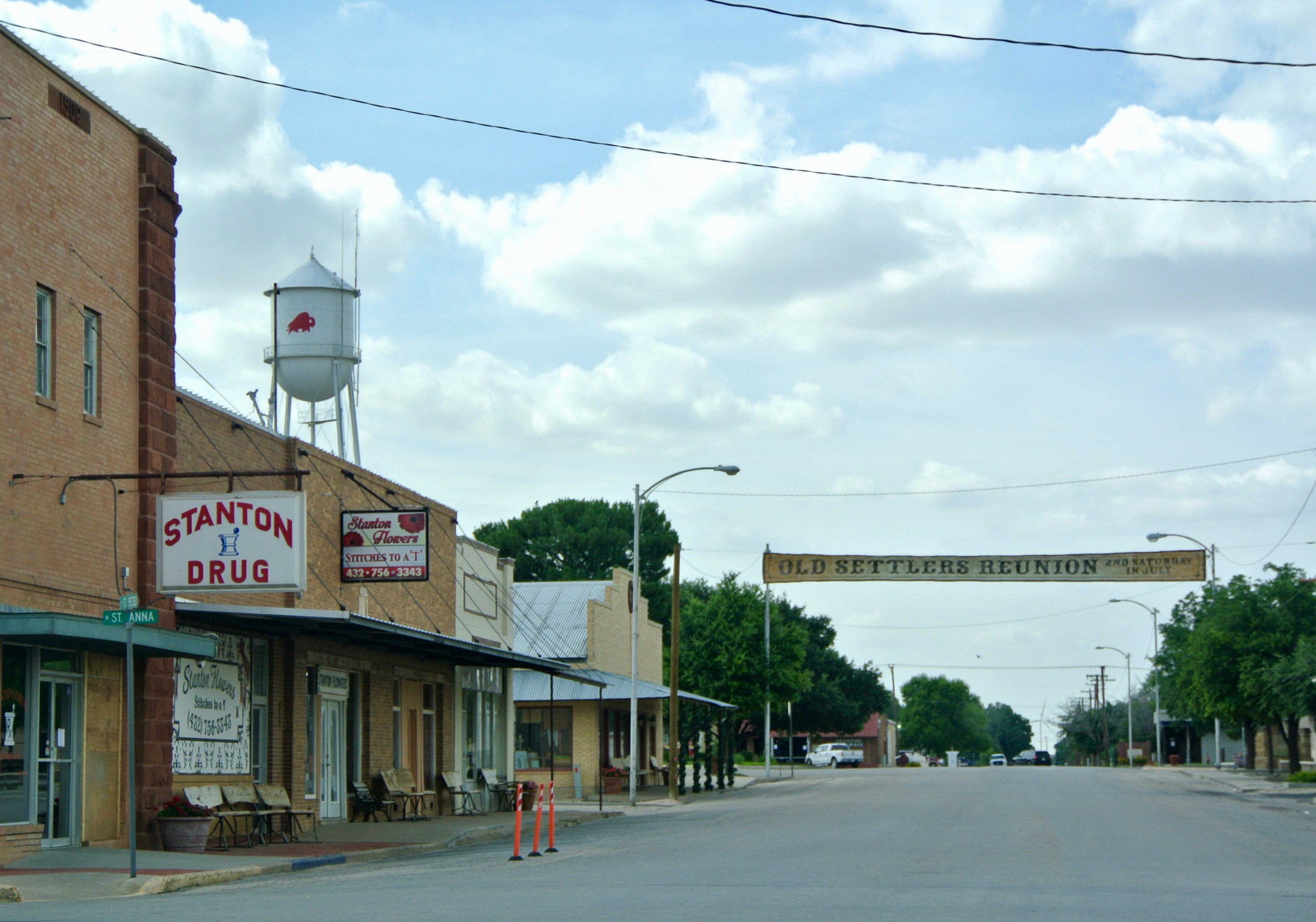 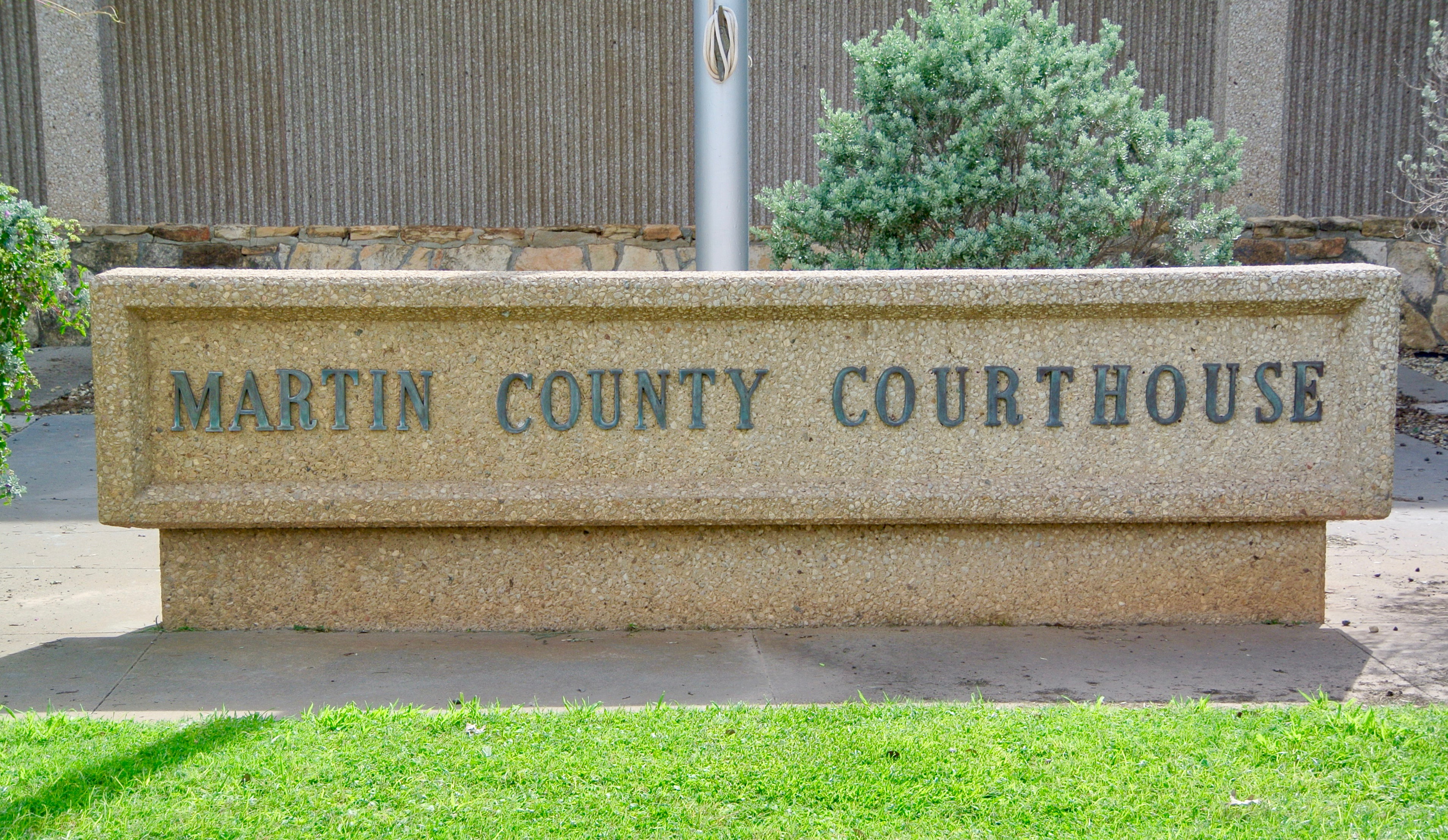 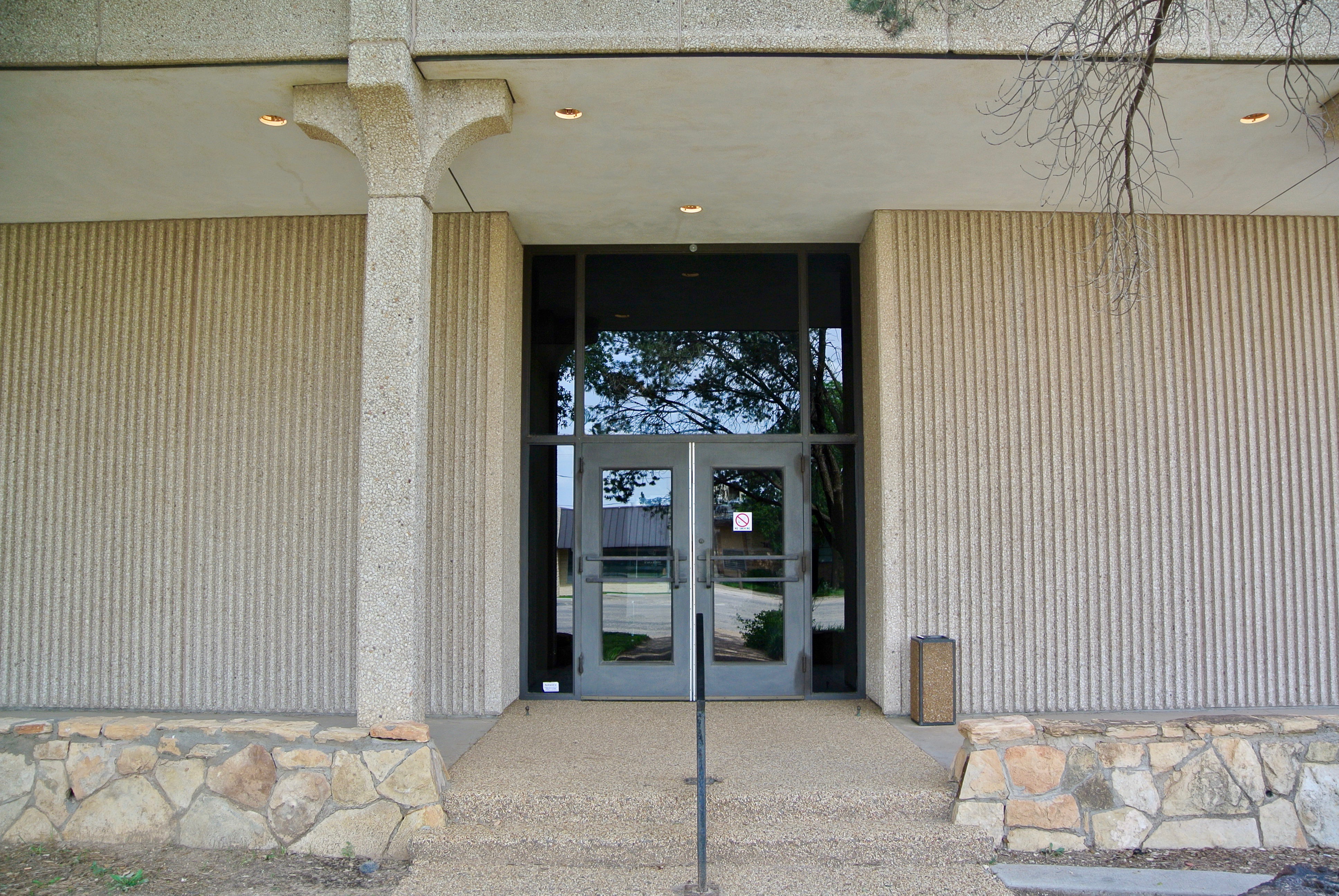 This is the southernmost entrance along the eastern façade (there are two). 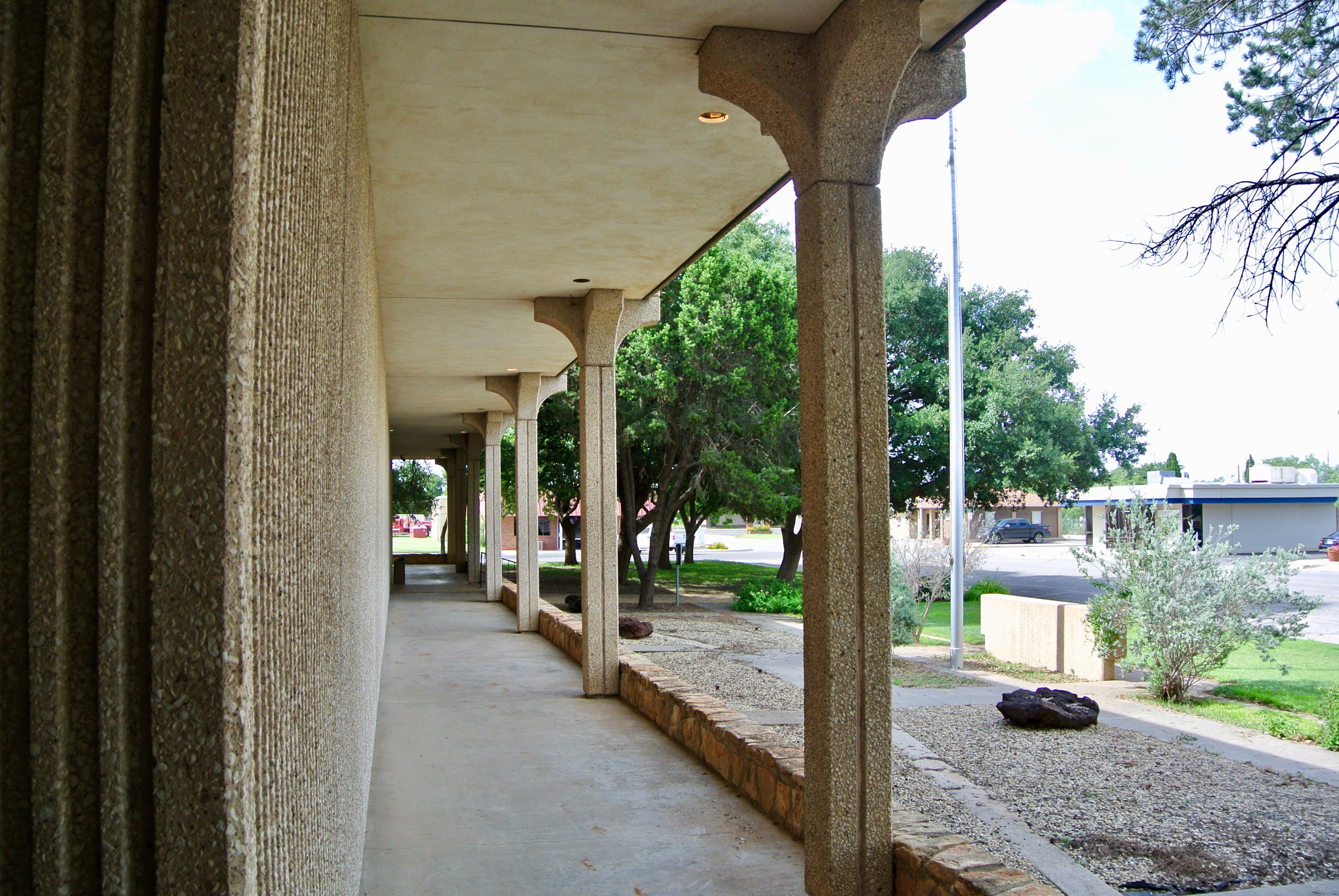 Saint Peter Street, as seen from those doors 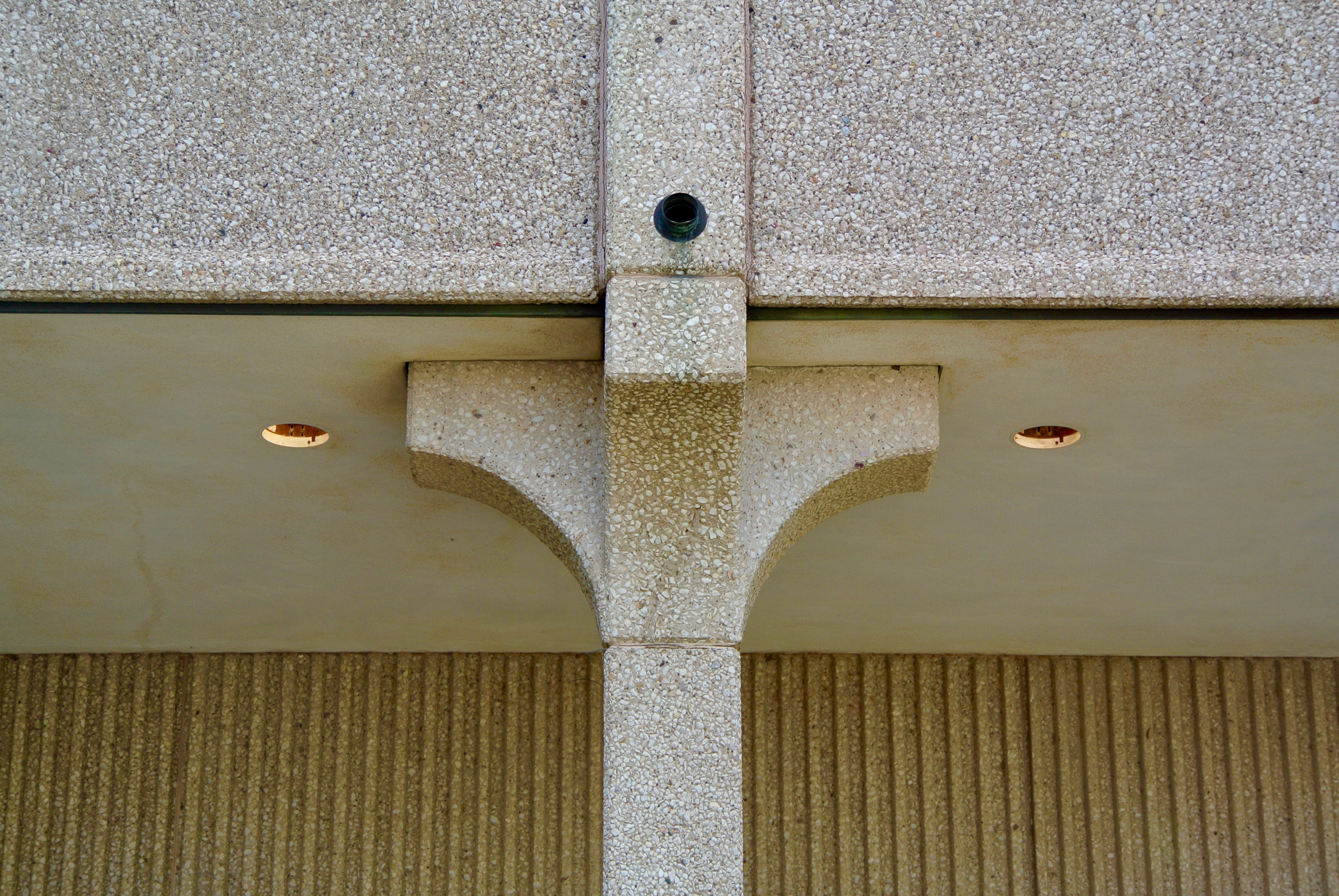 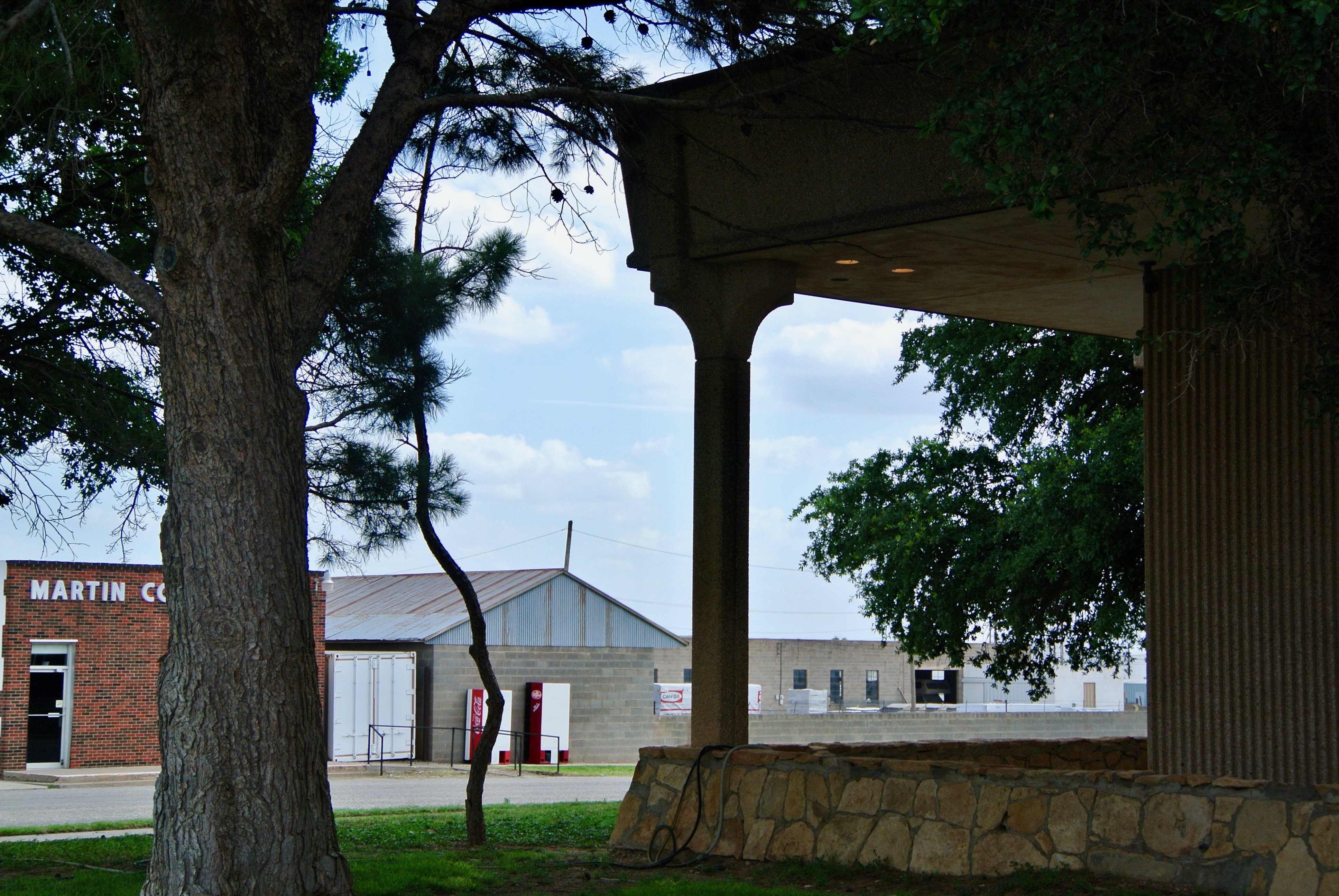 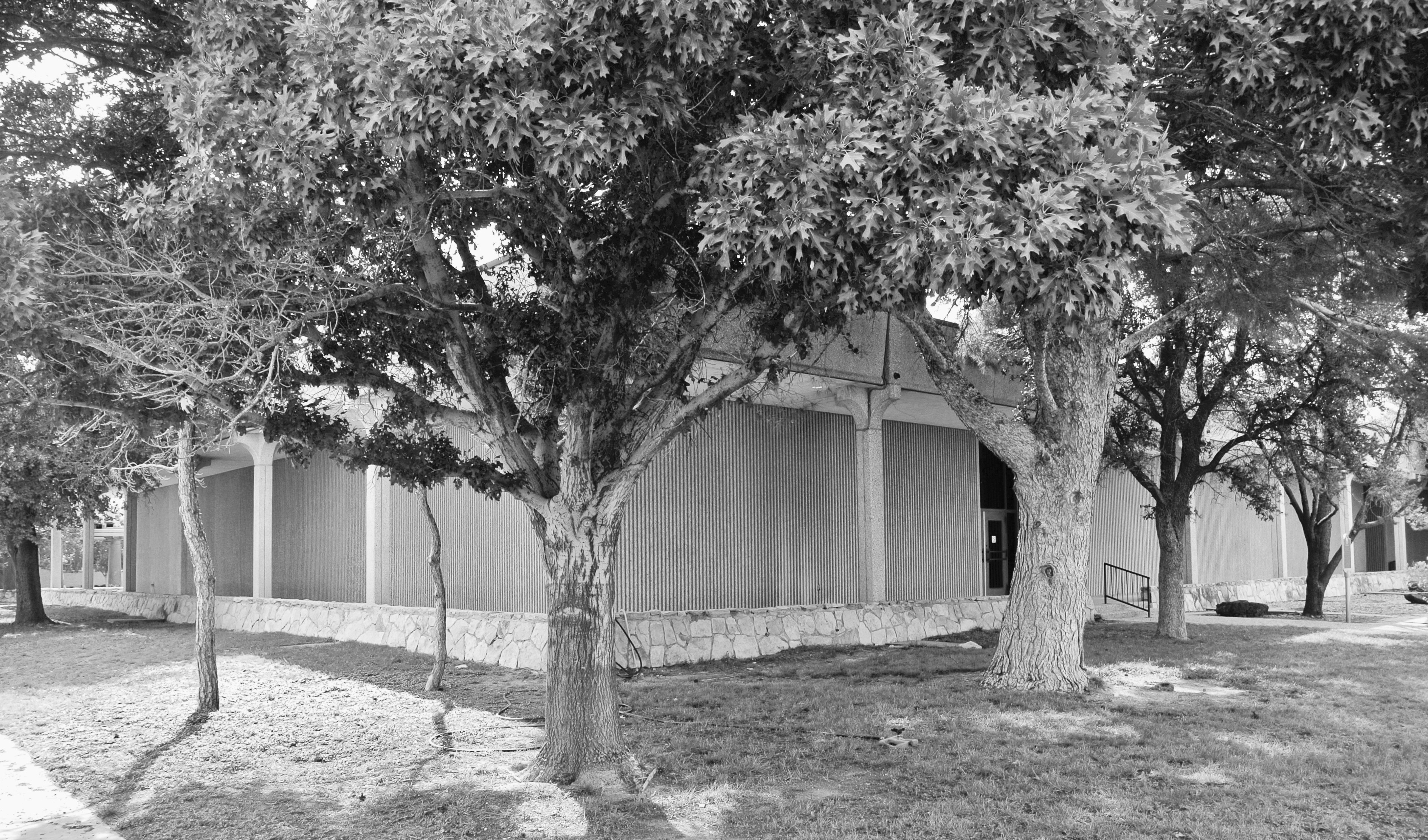 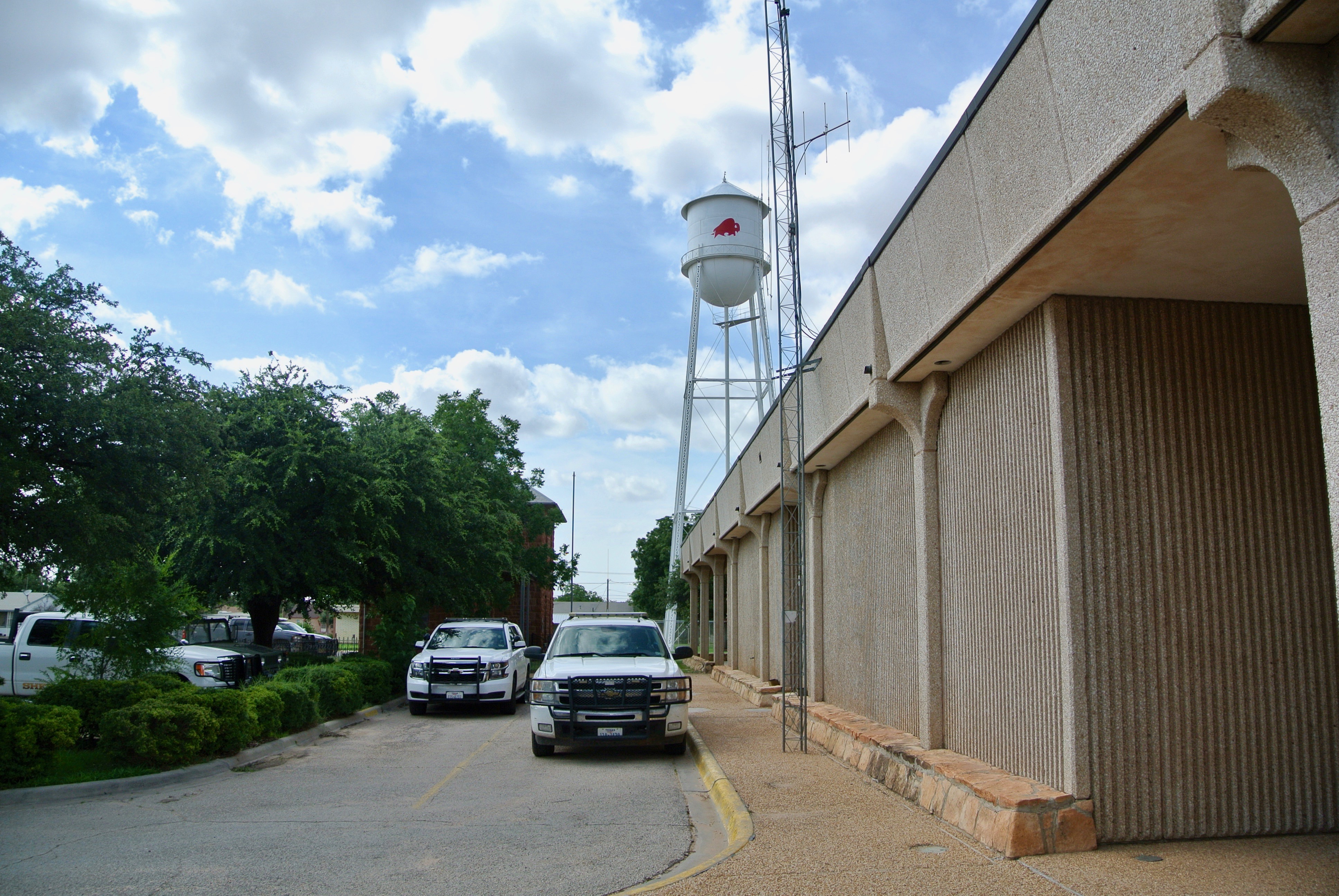 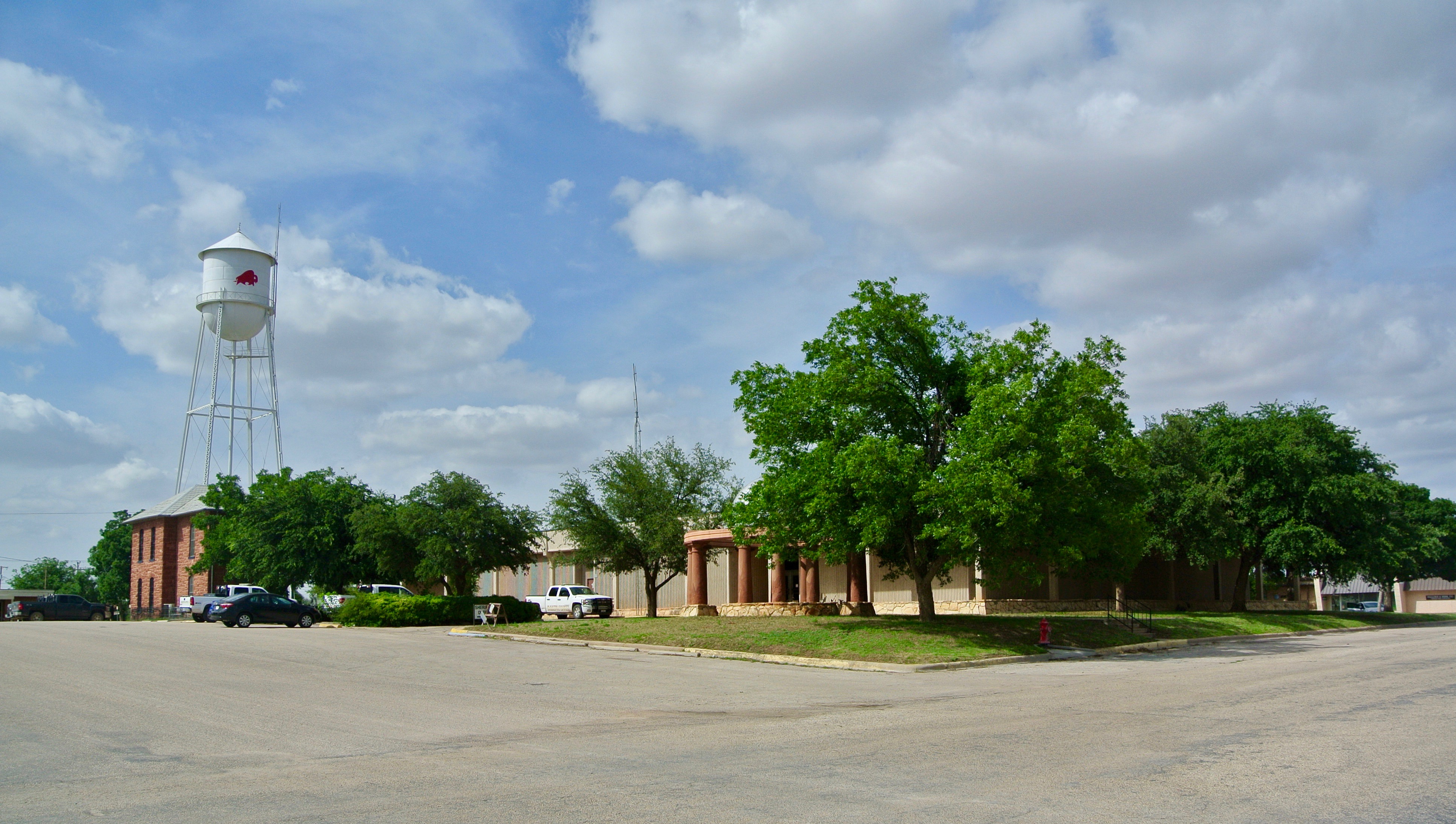 Martin County’s historic jail, at the northwest corner of the courthouse property 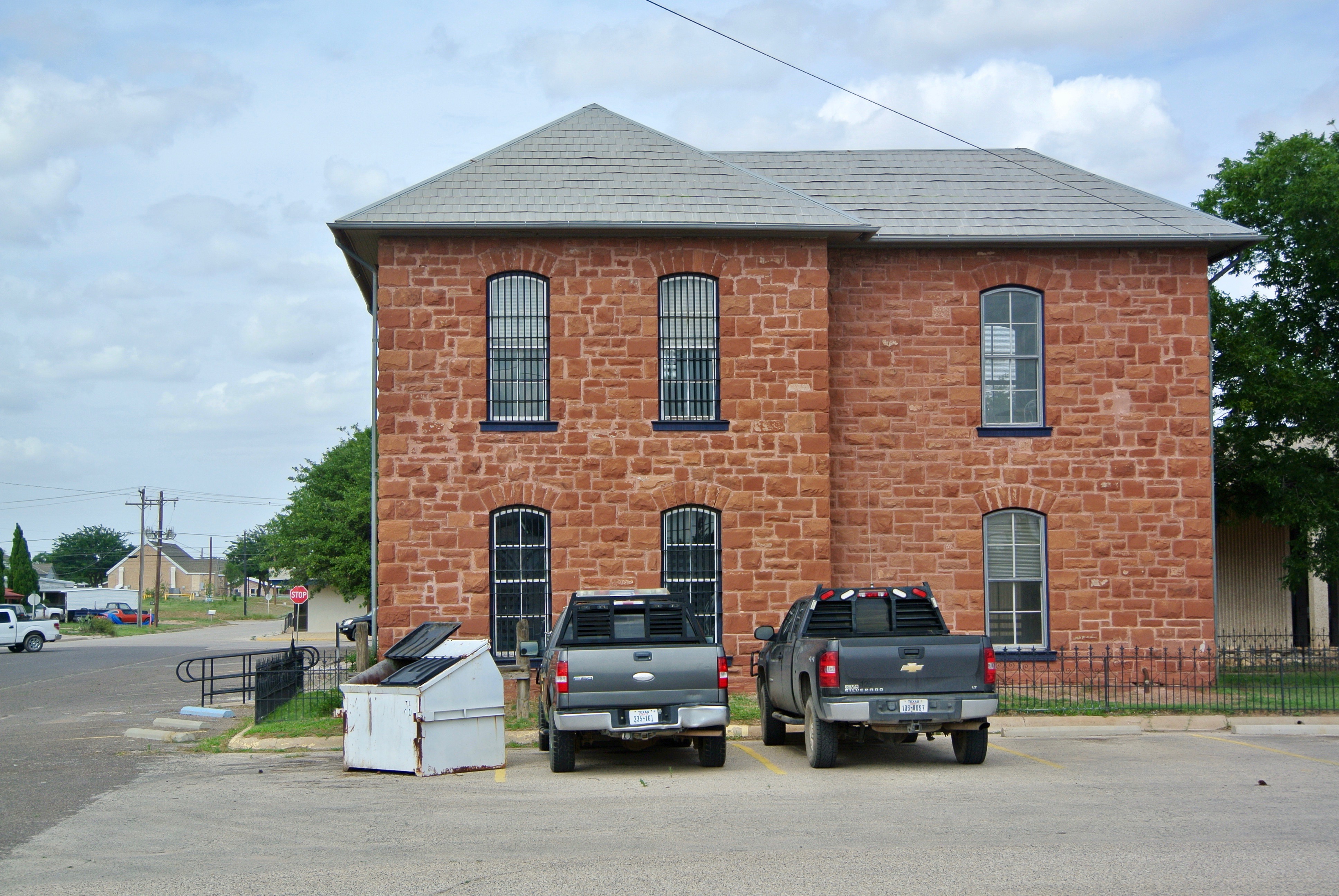 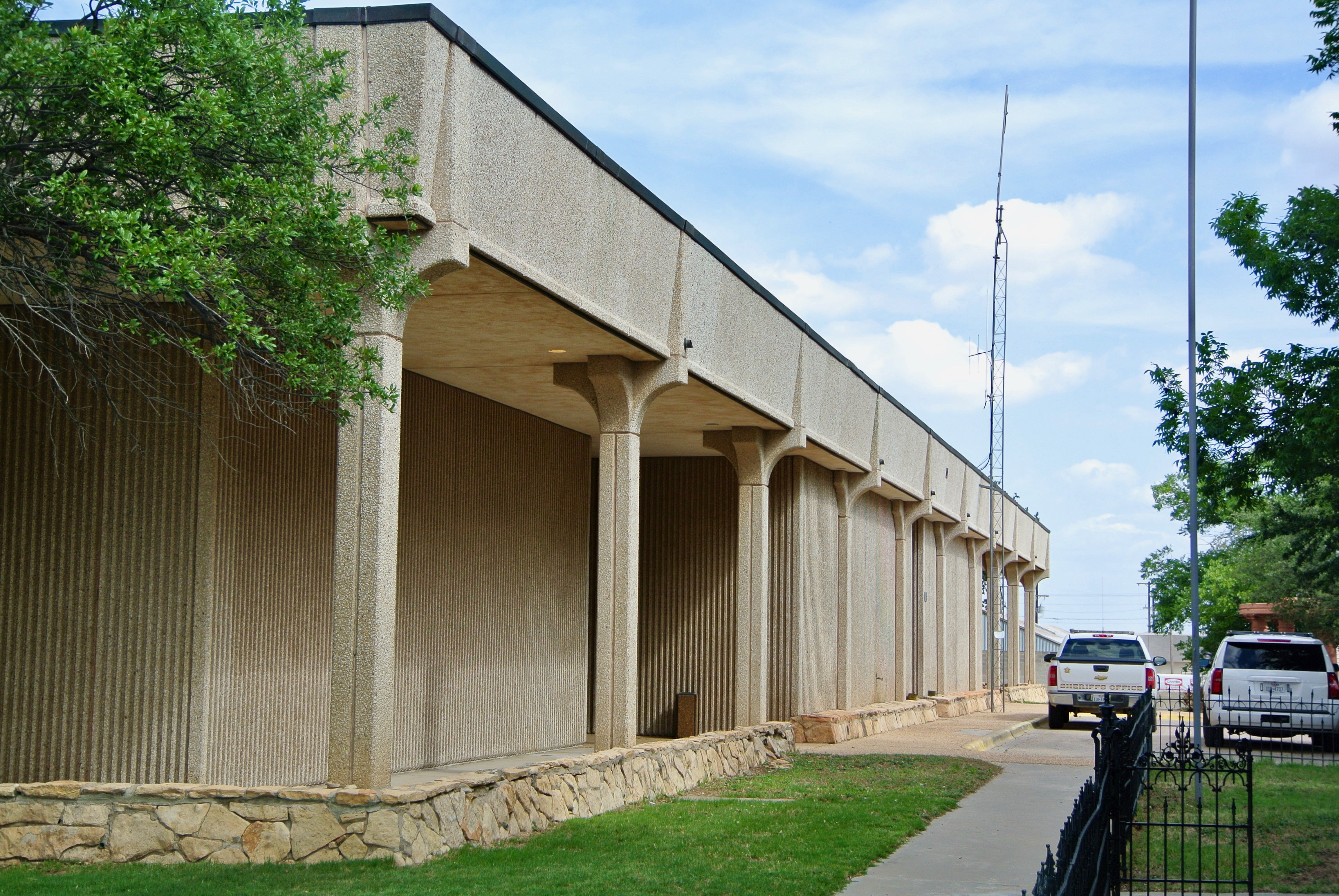 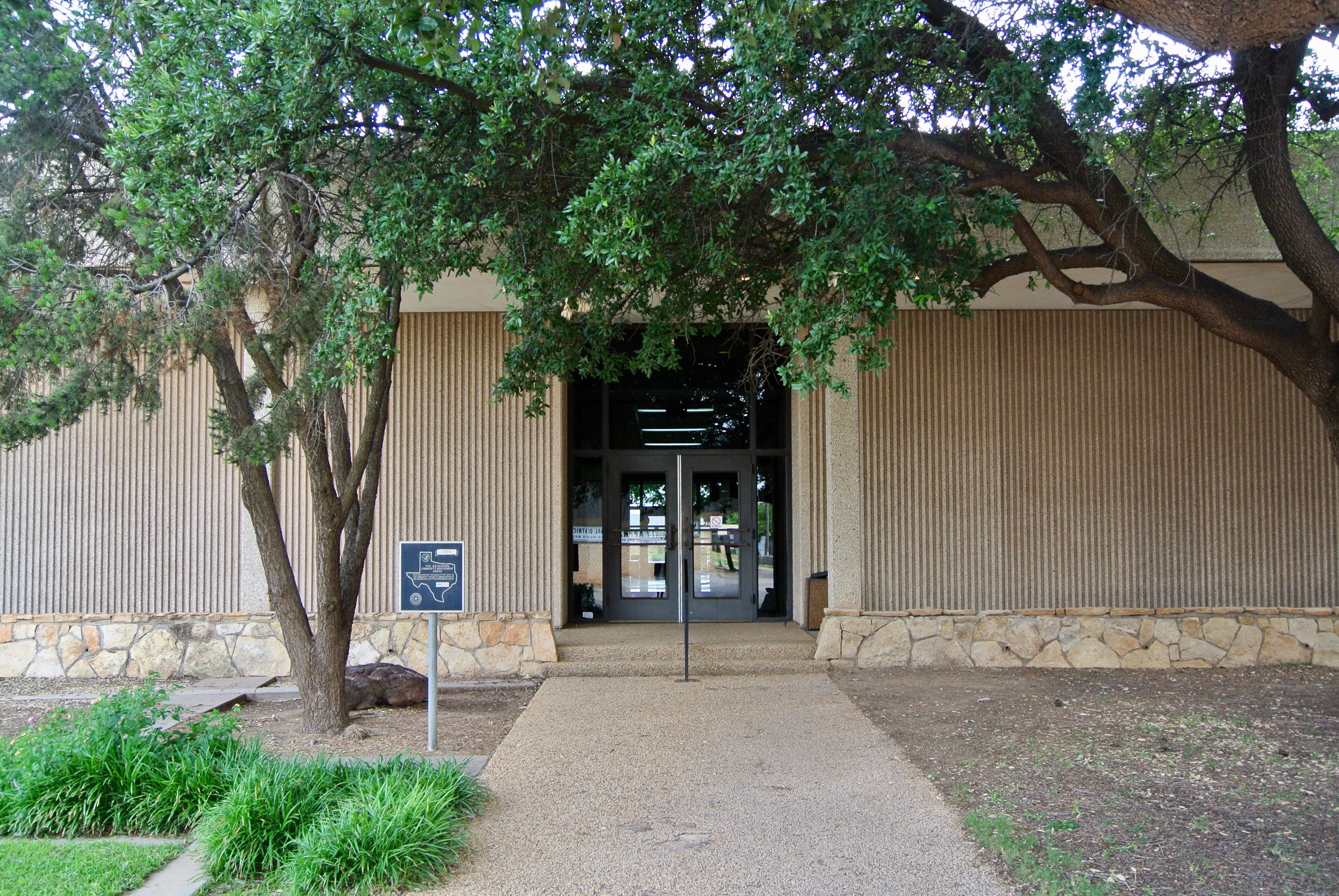 The courthouse’s second main entrance is along the eastern façade, near the intersection of School and Saint Peter Streets and the northeast corner. 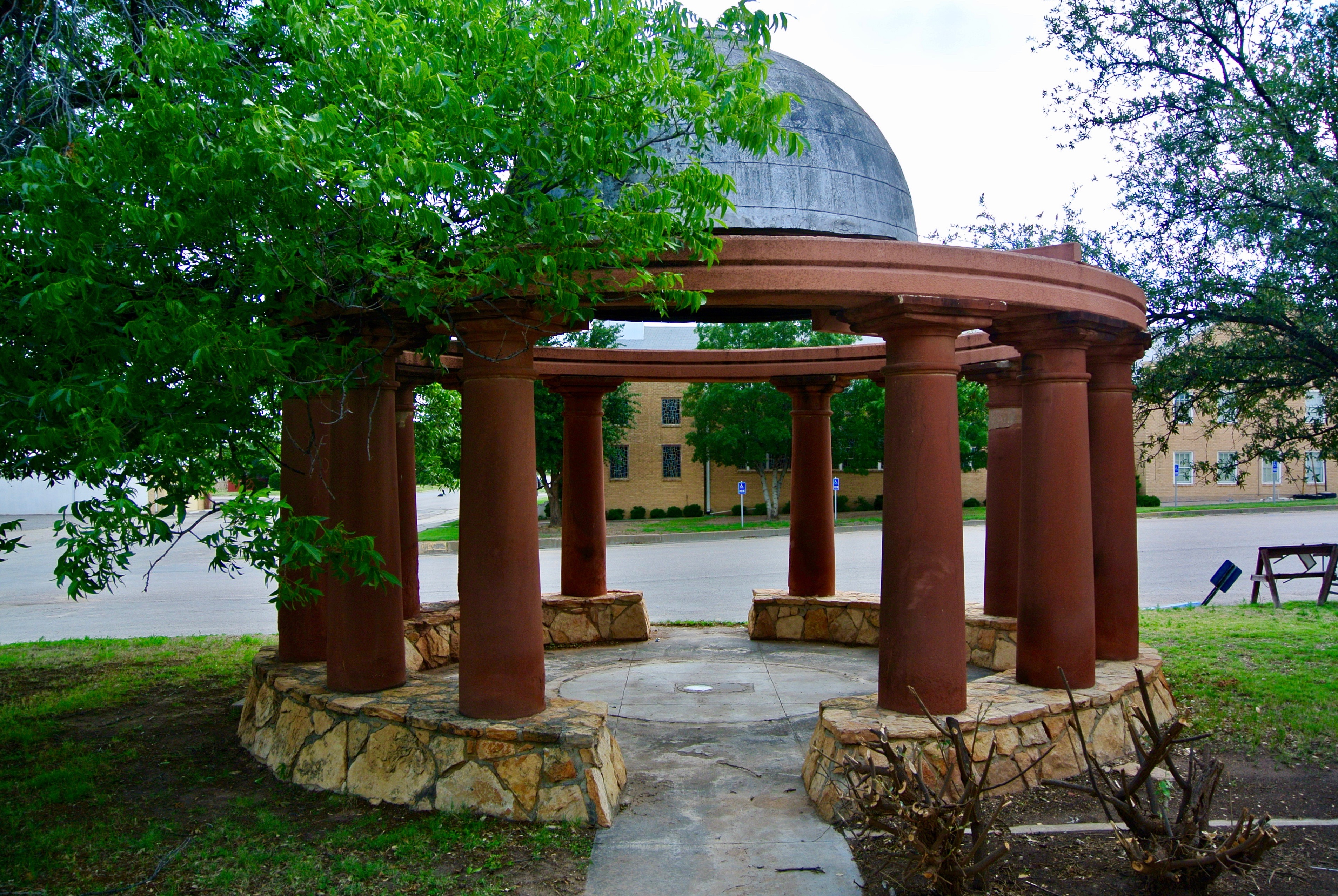 Back around the rear of the building is a small gazebo, constructed from dome and column remnants of the historic 1908 Martin County Courthouse. 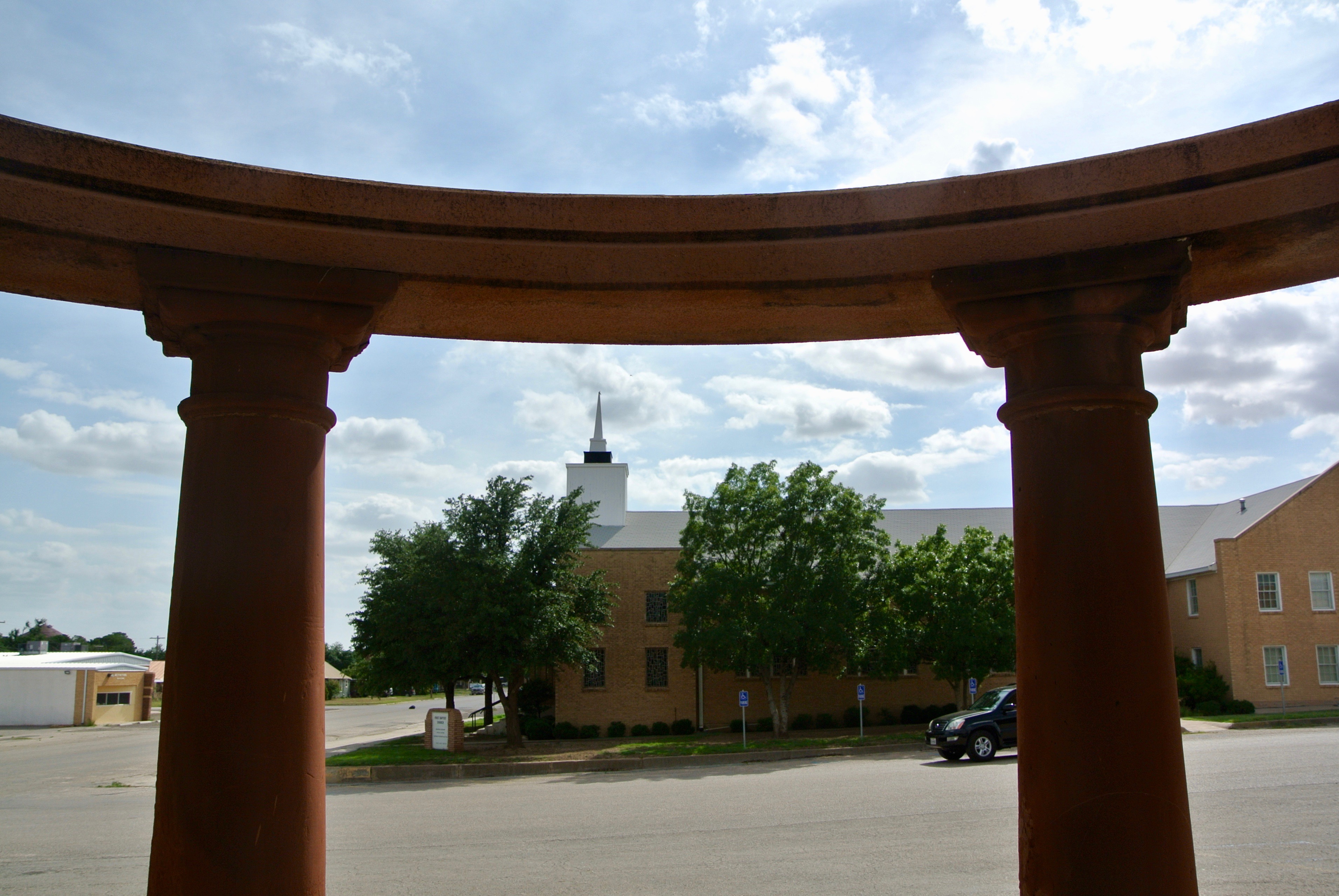 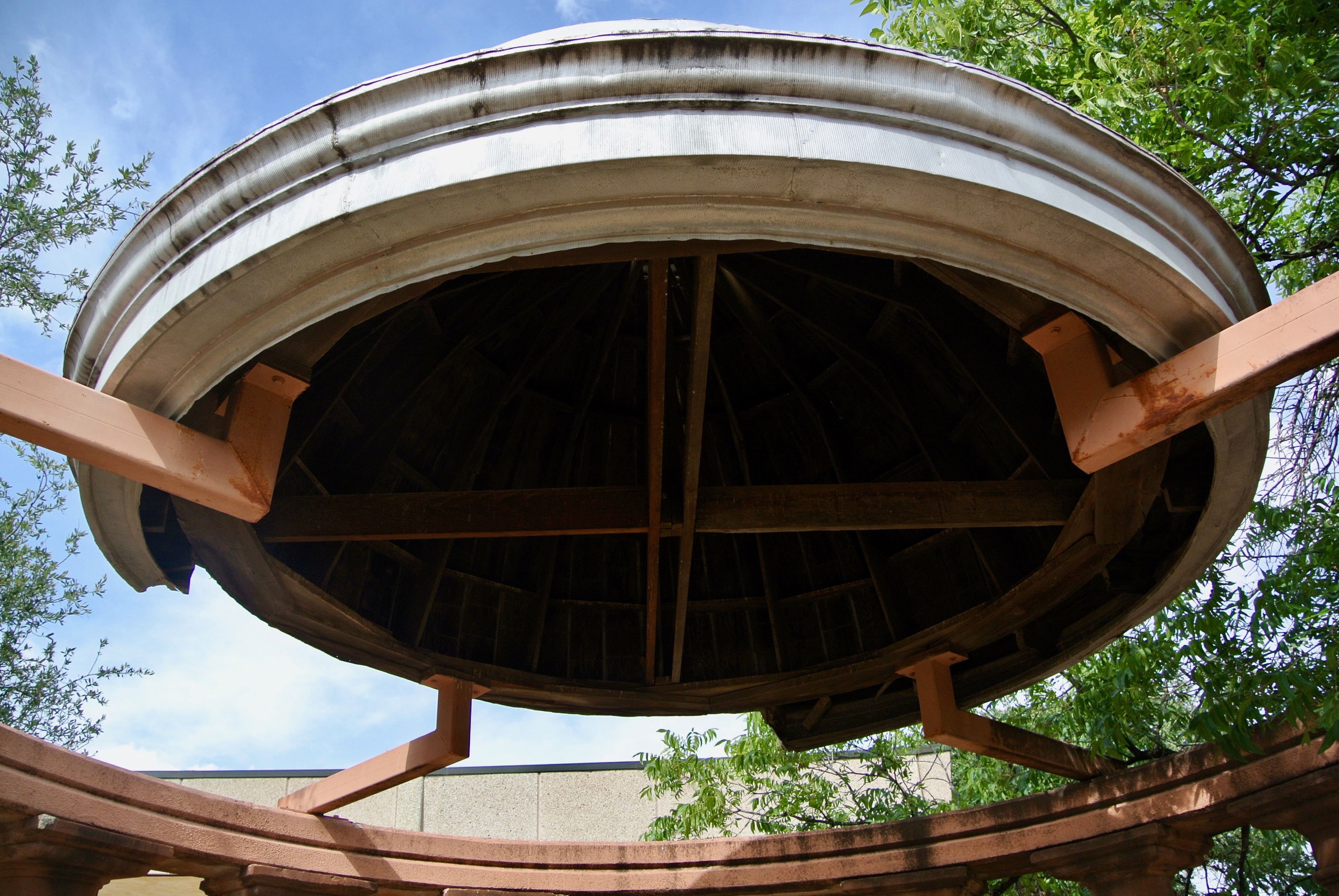 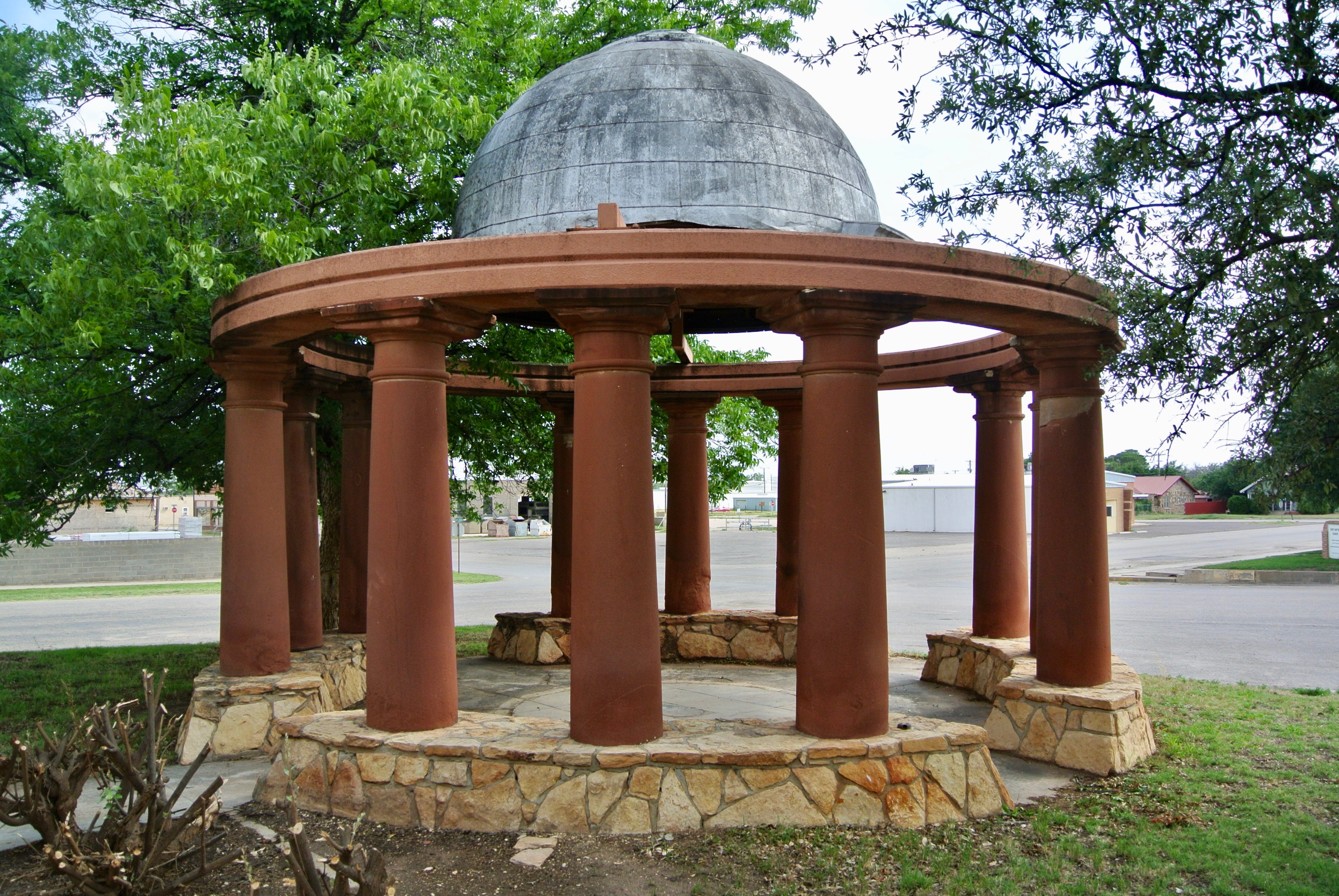 En route to Stanton, traveling through the Kingdom of Big Oil 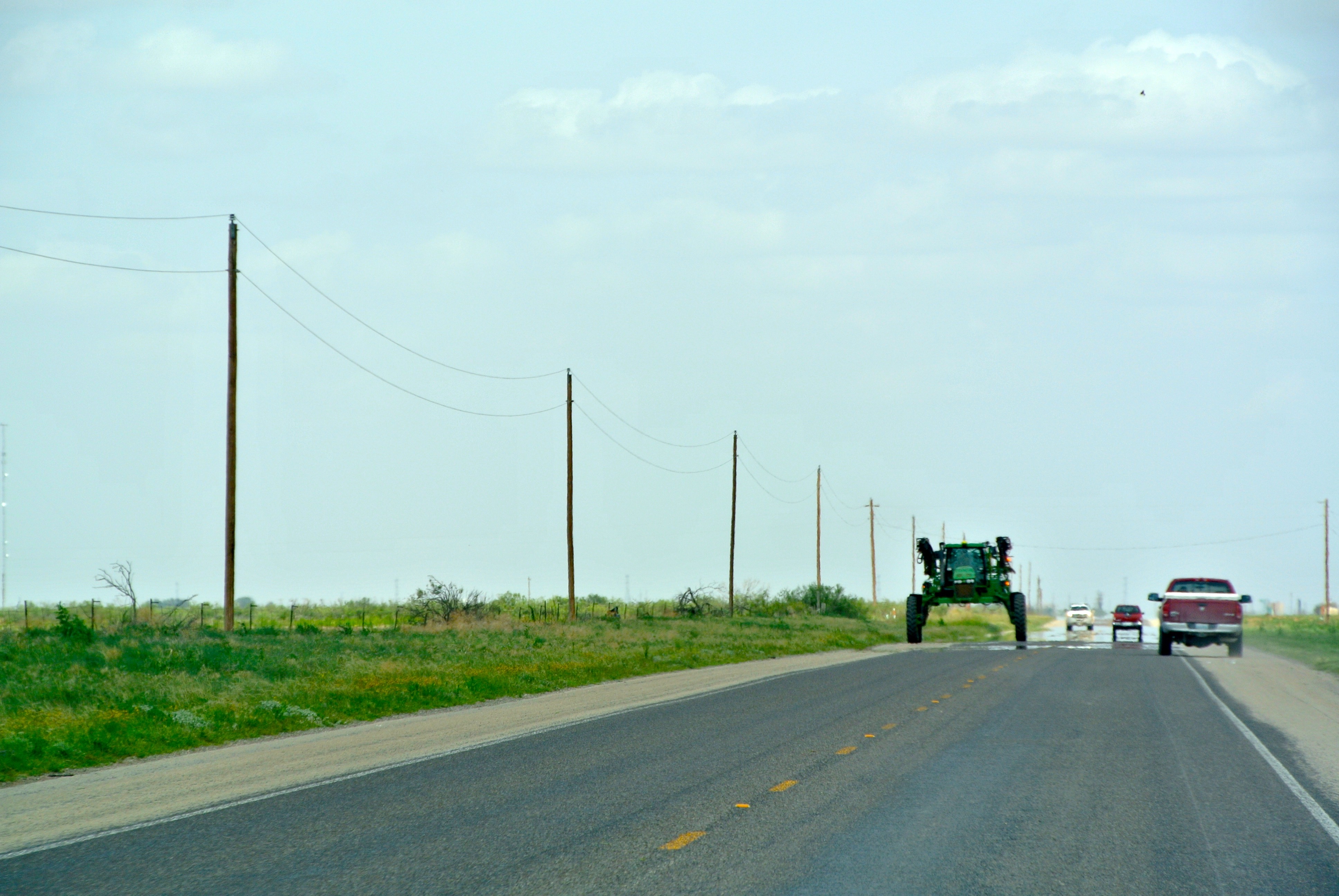 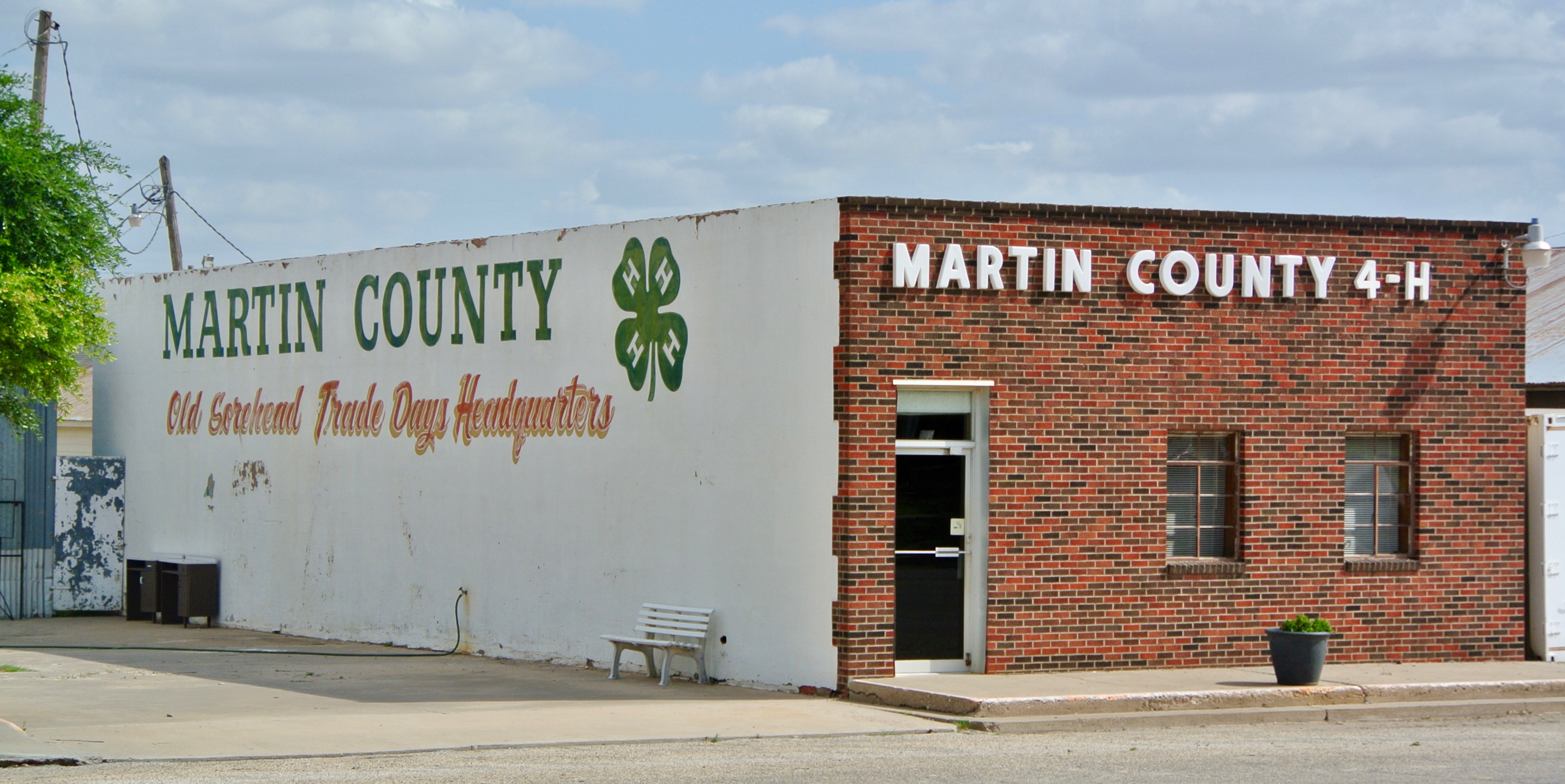 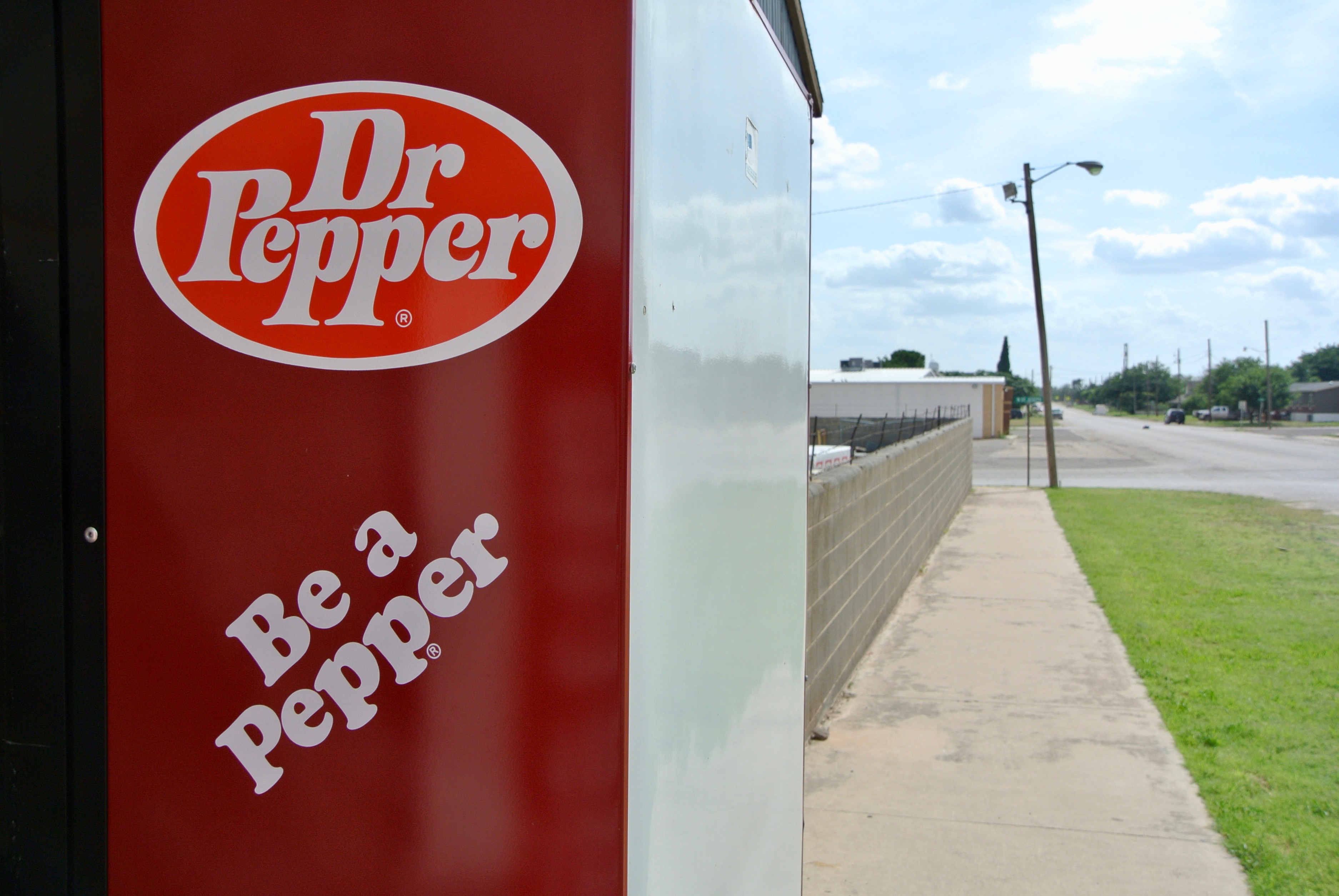 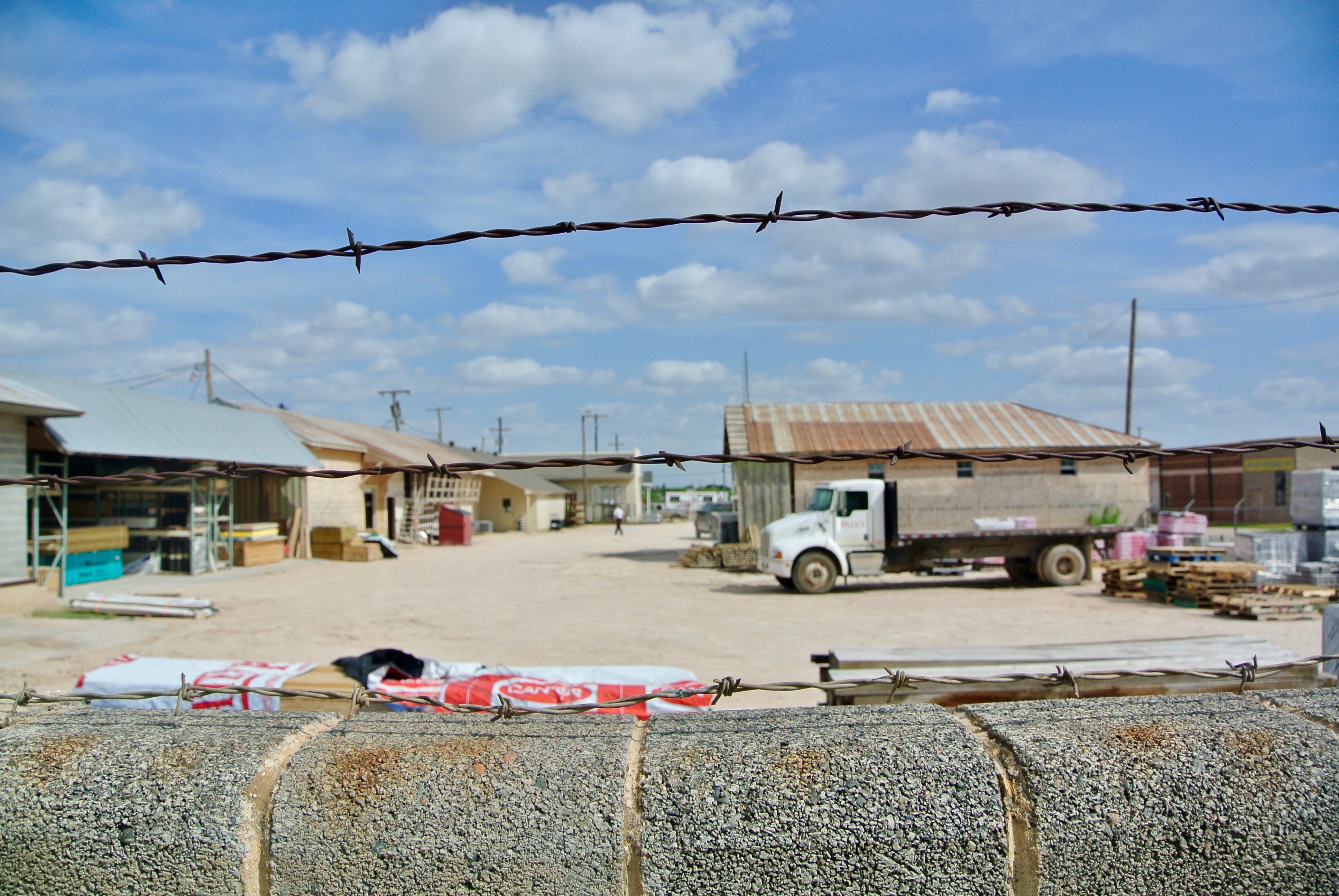 South of the courthouse 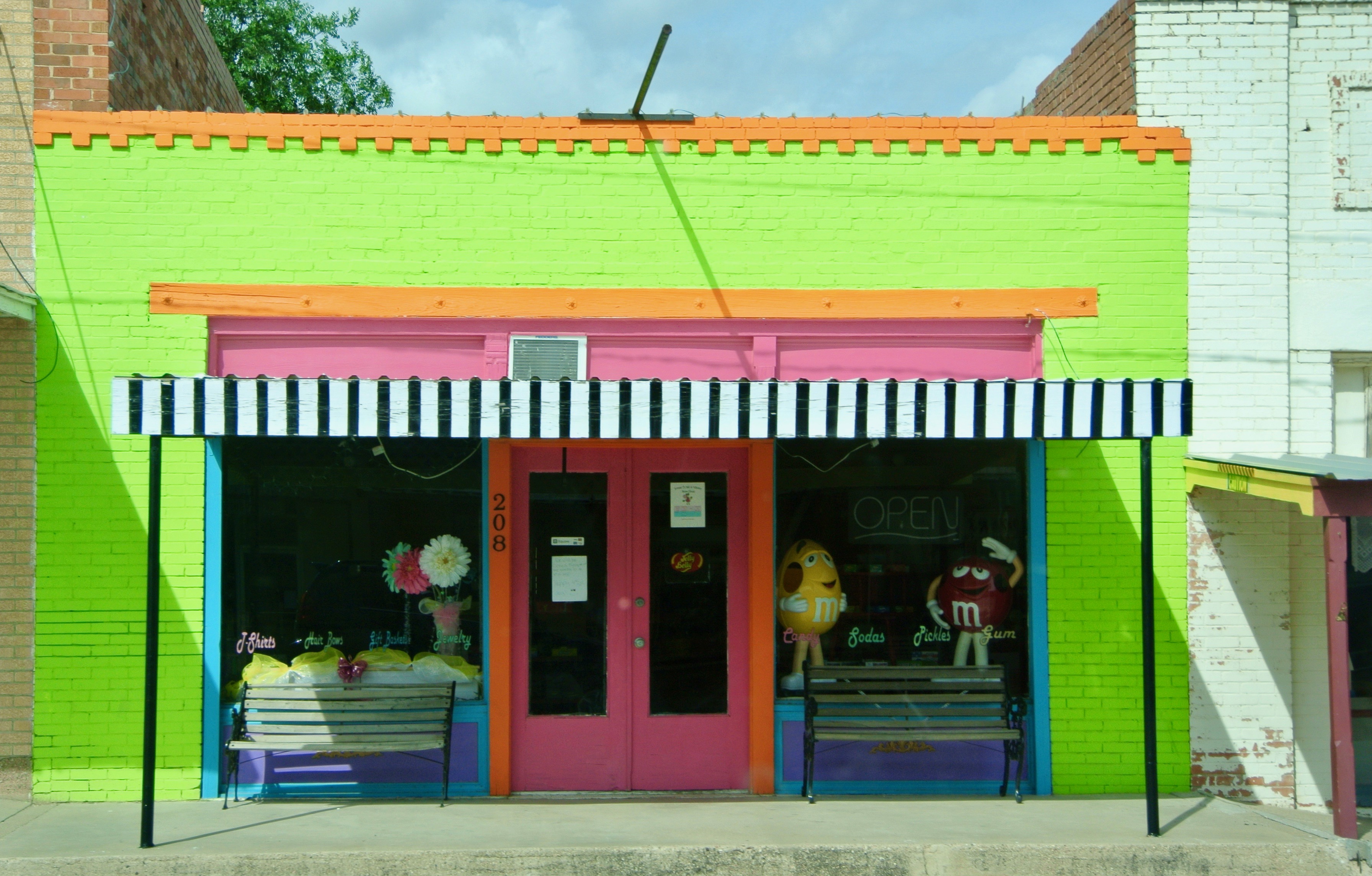 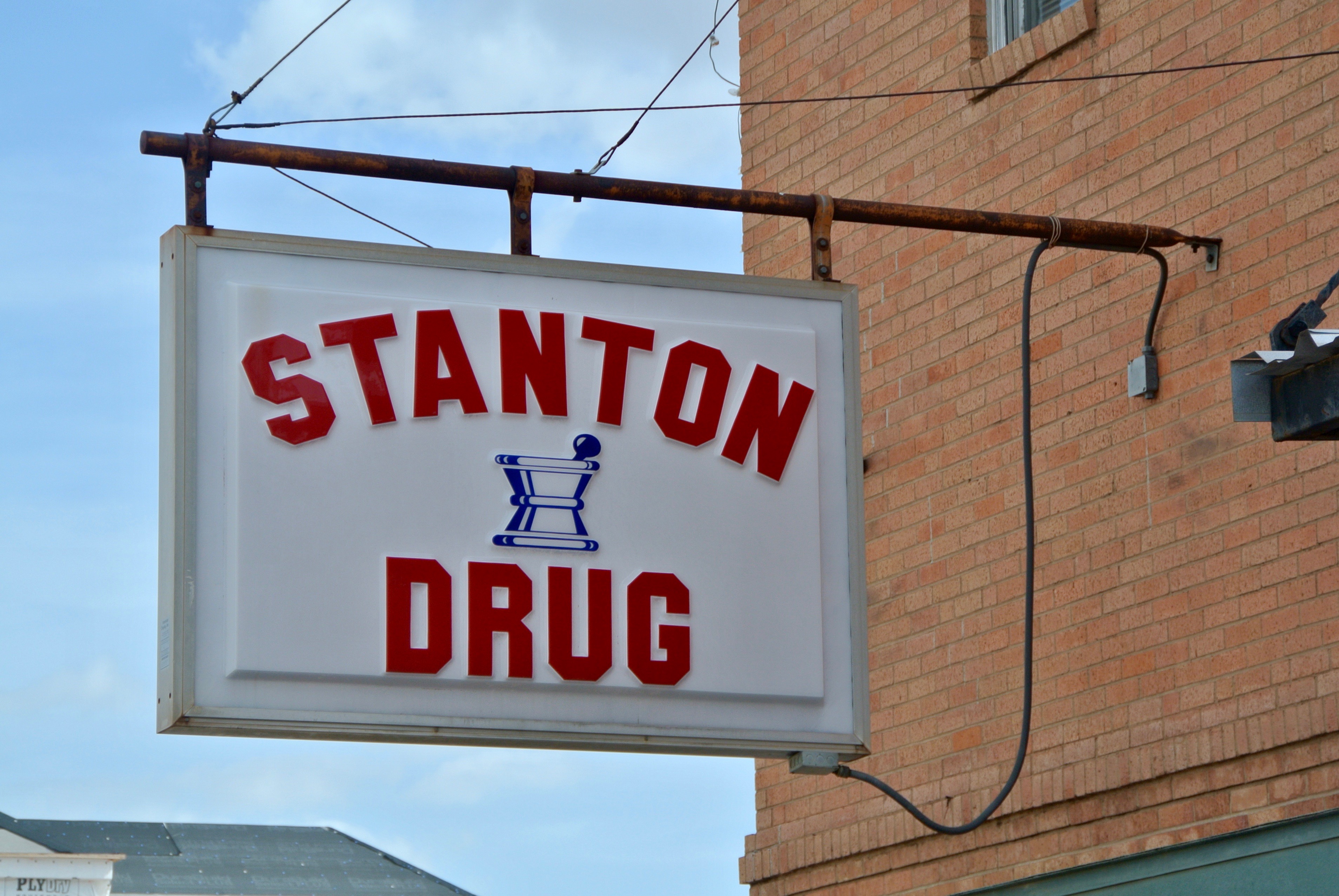 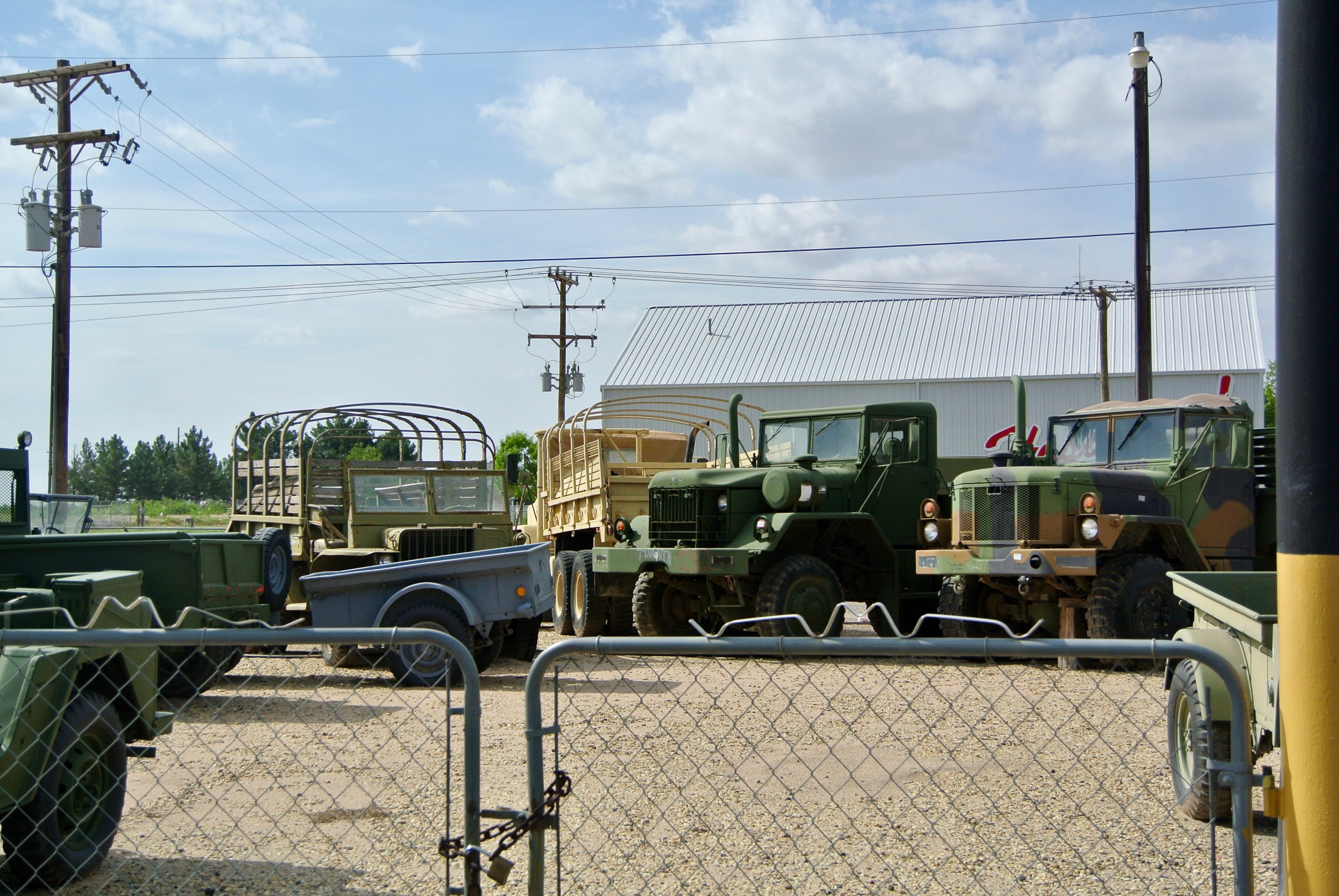 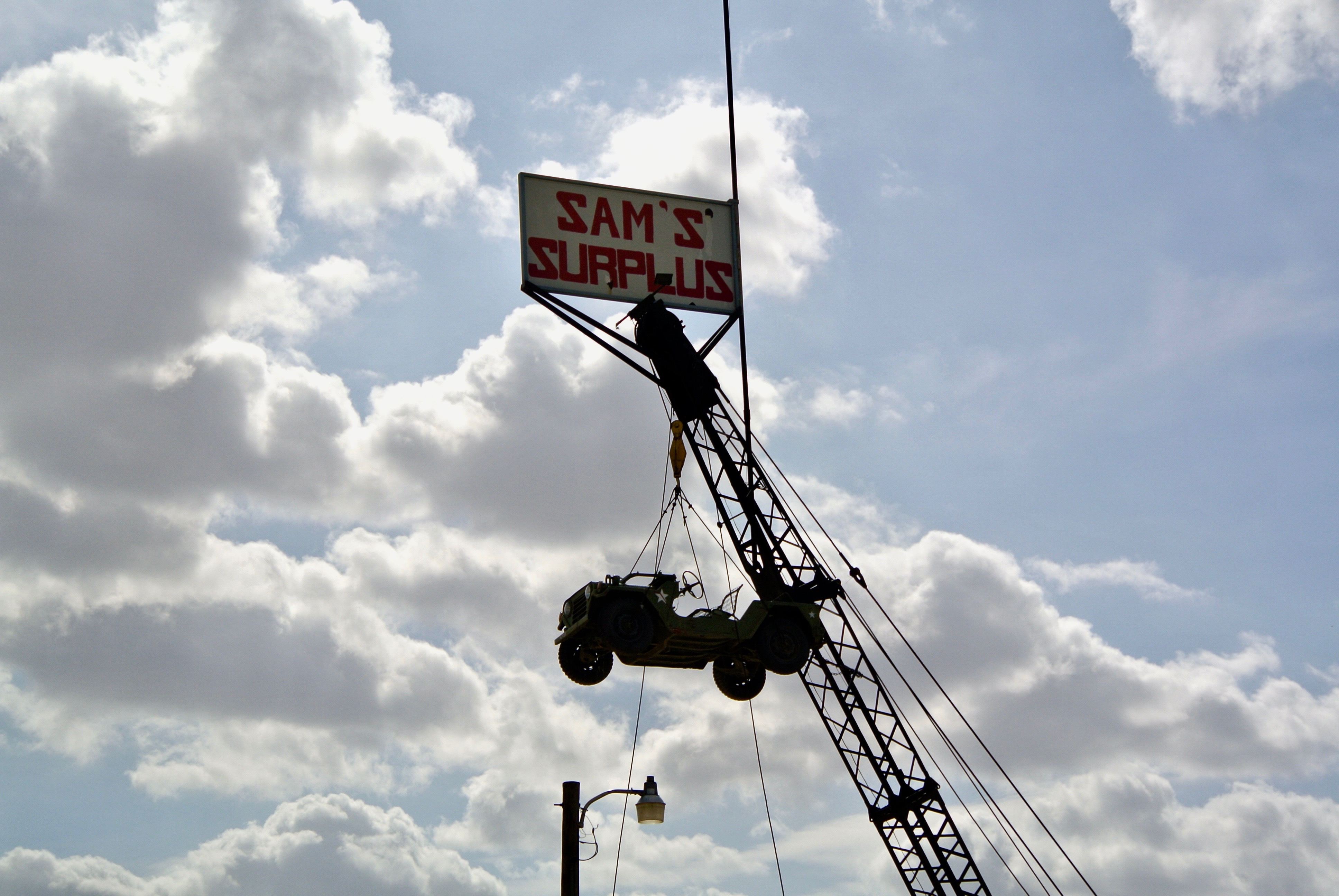