“The name Matagorda, Spanish for “thick brush,” was derived from the canebrakes that formerly lined the shore. Crossed by the once highly flood-prone Colorado River, which bisects it from north to south, the county extends across 1,612 square miles of mostly open prairie. With the exception of a slight undulation in the north, most of the county is level, with elevations ranging from sea level to seventy feet.”

“Alonso Álvarez de Pineda mapped the Texas coastline in 1519, but the first recorded European expedition into the Texas interior was conducted by Álvar Núñez Cabeza de Vaca, who sometime after 1528 probably passed through what later became Matagorda County. Guido de Lavazares landed at Matagorda Bay in 1558, surveyed the northern Gulf Coast, and claimed the area for King Charles V. In 1690 Manuel José de Cárdenas y Magaña mapped Matagorda Bay as part of the Llanos-Cárdenas expedition, and the Alarcón expedition passed through what is now Matagorda County between 1718 and 1719.”

“The town of Matagorda, at the mouth of the Colorado River, was founded in 1829 after [Stephen F. Austin had convinced the Mexican government that a military post was needed to protect incoming settlers. The town quickly flourished, and settlement proceeded inward from the coast, initially along Caney Creek. A custom house established at Matagorda in 1831 was maintained until the Texas Revolution. Steamers and sailing vessels approached within six miles of the town on Matagorda Bay; other county transportation was also largely by water. The municipality of Matagorda, which comprised the southeast corner of the original Austin grants, was established in 1834 while the area remained under Mexican control.” 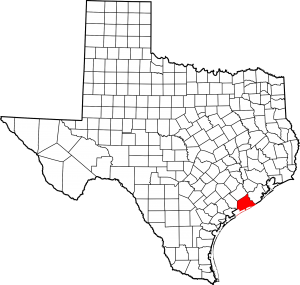 “After the war, in 1836, Matagorda County was organized as one of the first twenty-three counties by the Republic of Texas; Matagorda was designated as the county seat. The area’s culture reflected the southern backgrounds of many of its inhabitants. Baptist education began at Matagorda around 1829, an Episcopal congregation was established in the area in 1838, and the area’s first Methodist congregation was established in 1839. The county’s first newspaper, the Tribune, appeared in 1837.”

“As Texas’s second major seaport and a port of entry for Texas immigrants from 1840 to 1865, Matagorda rapidly developed transportation and industry. The town had a gristmill in 1859, and the largest sugar mill in the state was built there sometime before 1860. By 1850 there were 2,124 people living in the county, including 913 whites, 1,208 slaves, and 3 free blacks. According to the agricultural census, almost 59,000 acres were in farms in the county that year, including 8,500 acres considered [']improved.[']“

“From 1875 to 1880 financial difficulties plagued the county government, which was forced to resort to script to finance its activities. There were few towns and little commerce in the area at that time, and the rich farm lands along Caney Creek held the majority of the population; progress awaited the development of improved roads. Steamships of the Morgan Lines maintained a station at Palacios in the 1880s, but the once-thriving port of Matagorda declined, losing its competition with Lavaca and Indianola as a port.”

“Bay City was founded in 1894, and because of its location near the center of the county it replaced Matagorda as the county seat. The influx of new immigrants increased land values but discouraged ranching, though the county’s herds were improved with Hereford and Durham cattle strains. Cotton acreage in the county almost tripled during the 1890s, and by 1900 12,000 acres in the county were planted in the fiber. That year there were 448 farms and ranches in the county, and the population had increased to 6,097.”

“While the town of Matagorda was the only major town in the county in 1890, by 1913 the railroads had helped to establish or expand many towns and villages, including Bay City, Palacios, Blessing, Collegeport, Markham, Midfield, Wadsworth, Van Vleck, Pledger, and Sargent. Bay City, located at the junction point of all three railroad lines, flourished after 1900.”

“Between 1900 and 1920 the population of Matagorda County more than doubled, as land speculators helped to attract immigrants to the area. There were 13,589 people living in the area by 1910 and 16,589 by 1920. The area’s population continued to grow during the 1920s, and by 1930, 17,678 people lived in the county. Immigration into the area during the early twentieth century fundamentally altered the county’s racial composition. More than two-thirds of the county’s residents had been black, but by 1930 blacks constituted under 26 percent of the area’s residents.”

“By 1936 the Colorado River had built a delta across Matagorda Bay to Matagorda Peninsula, cutting the bay into its present eastern and western sections. That same year a channel was dredged through the new delta from the Gulf of Mexico to the town of Matagorda; thereafter, Matagorda was no longer on the coast. In spite of the depression, the county’s population continued to grow during the 1930s, and by 1940 there were 20,066 people living in the area.”

“By 1982 the population was 20 percent Hispanic, 14 percent black, 20 percent of English descent, and 16 percent of German or Irish descent. Many people still engaged in farming, but 10 percent were employed in the construction industry, and more than half the population resided in either Bay City or Palacios. A total of 782 businesses operated in the county in 1982, and 12 percent of the labor force was employed in manufacturing. The fishing industry and fine recreational facilities for hunting also helped to diversify the economy.”

“Almost half of the county’s residents live in Bay City (population, 17,342), the county seat and a center of petrochemical production in the area. Other communities include Palacios (4,574), Markham (1,082), and Van Vleck (1,912). Major tourist attractions include fishing and water sports, birding, and an October rice festival. The Texas Independence Trail runs through Matagorda County, and an annual cattle drive across the Colorado River to summer pastures on Matagorda Peninsula, which began in 1919 still drew tourists in 1994. Palacios celebrates the Texas Fishermen’s Seafood Festival in November. Bay City hosts the Matagorda County Fair, in March, and Market Days on the Square on the third Saturday of every month.” 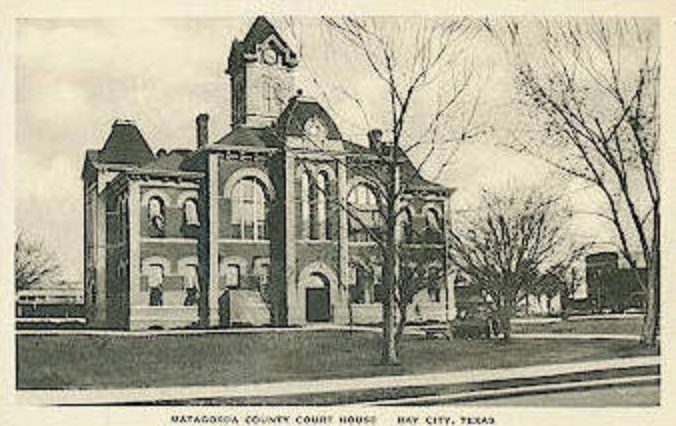 This is a work of Eugene Heiner, designed in the Second Empire style. The contractor was named Thomas Lovell. In 1928, it was renovated beyond recognition with the addition of wing additions and the destruction of its central tower. 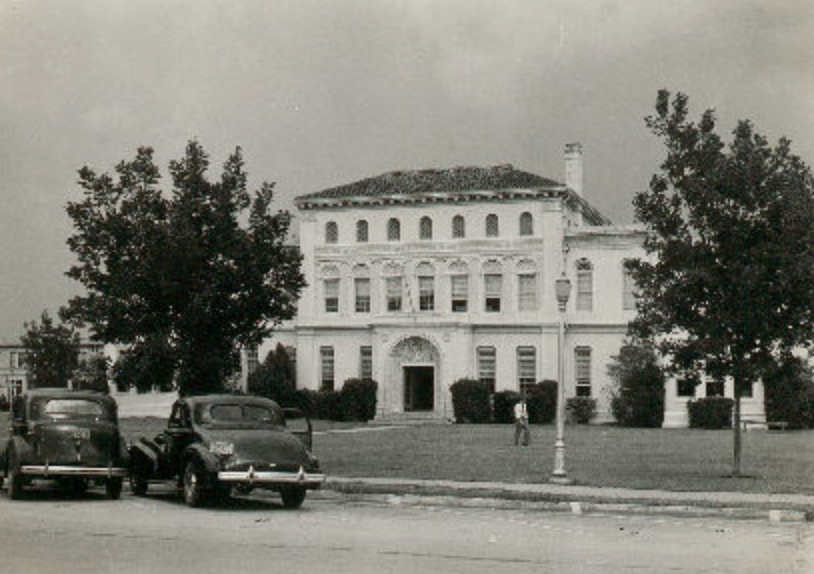 Unfortunately, it was demolished in 1963. 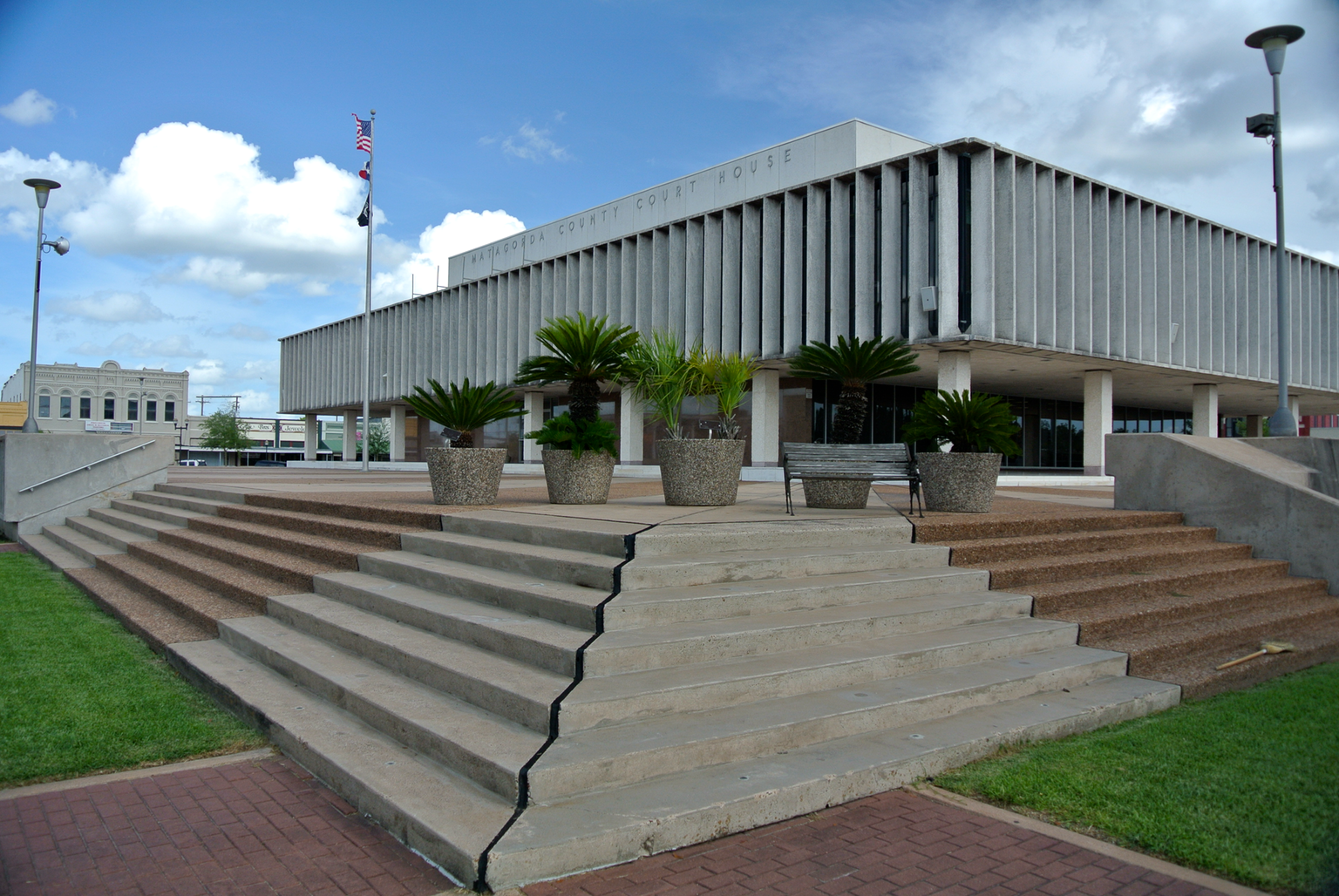 This was designed by the firm Rusty, Martin, & Vale and constructed by Cross Construction Co. Inc. It sits at the center of a historic square, and certainly looks slightly out of place. However, the grounds are kept clean and the building is in good shape. I can’t ask for more. 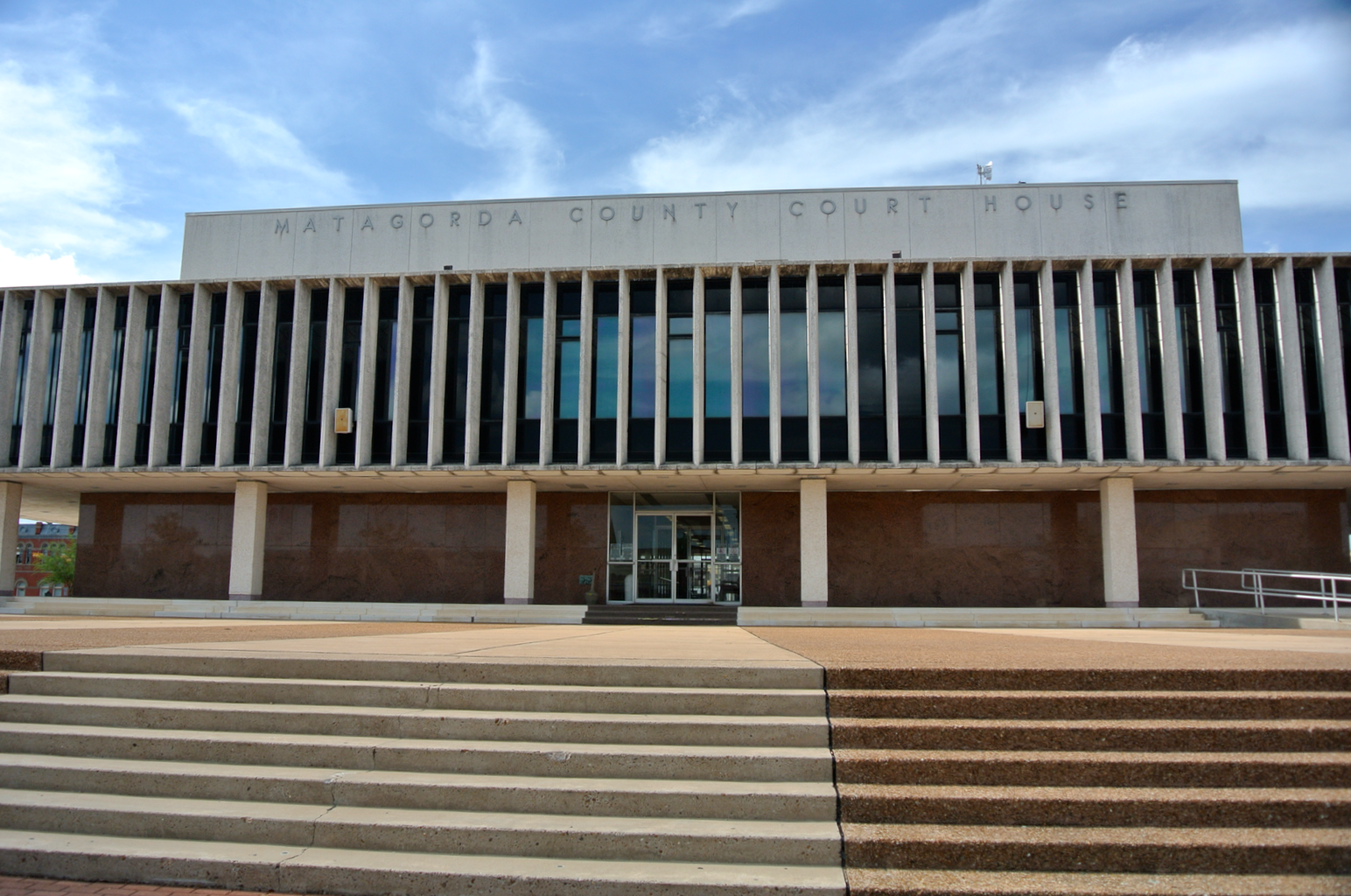 The northern façade, on 7th Street 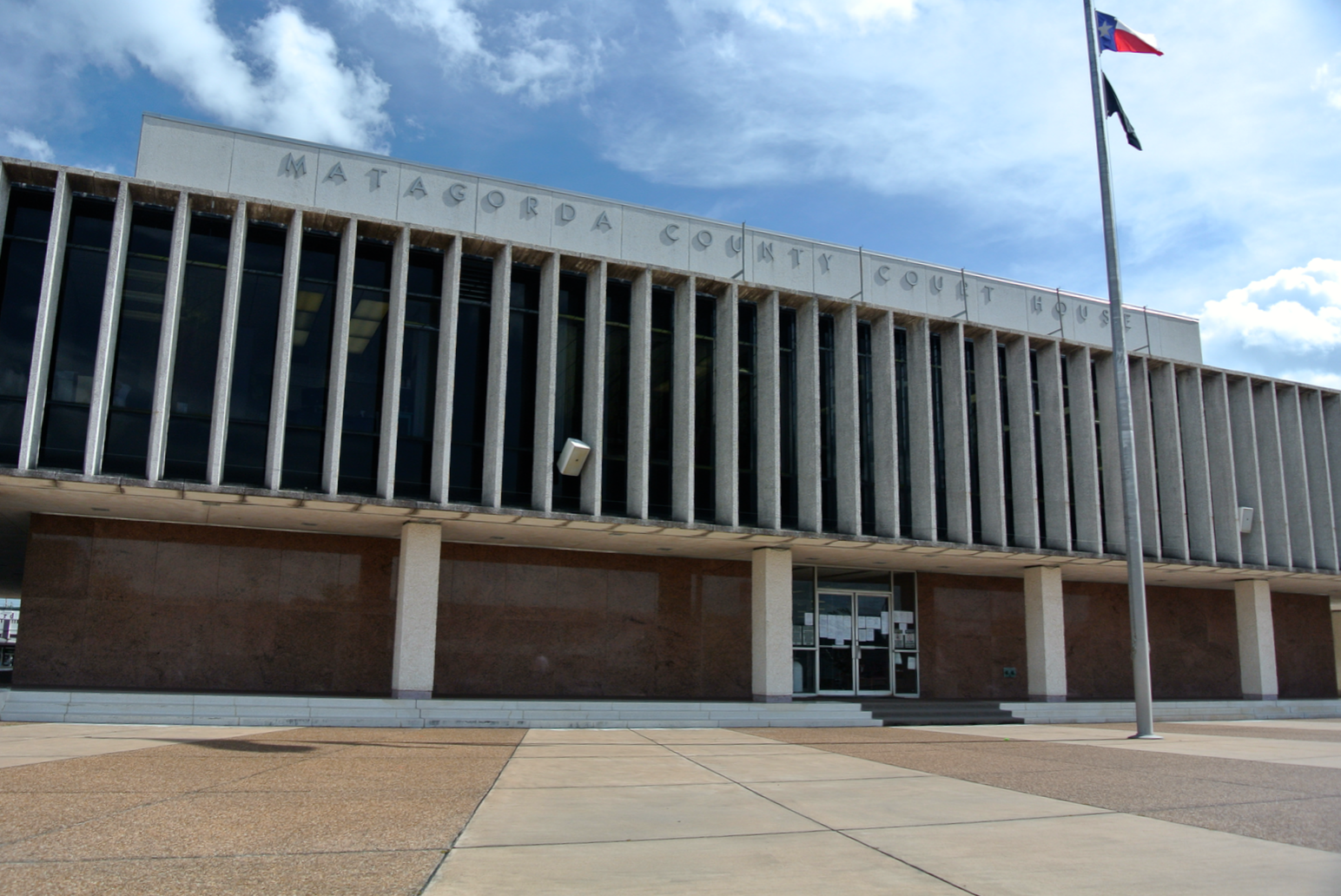 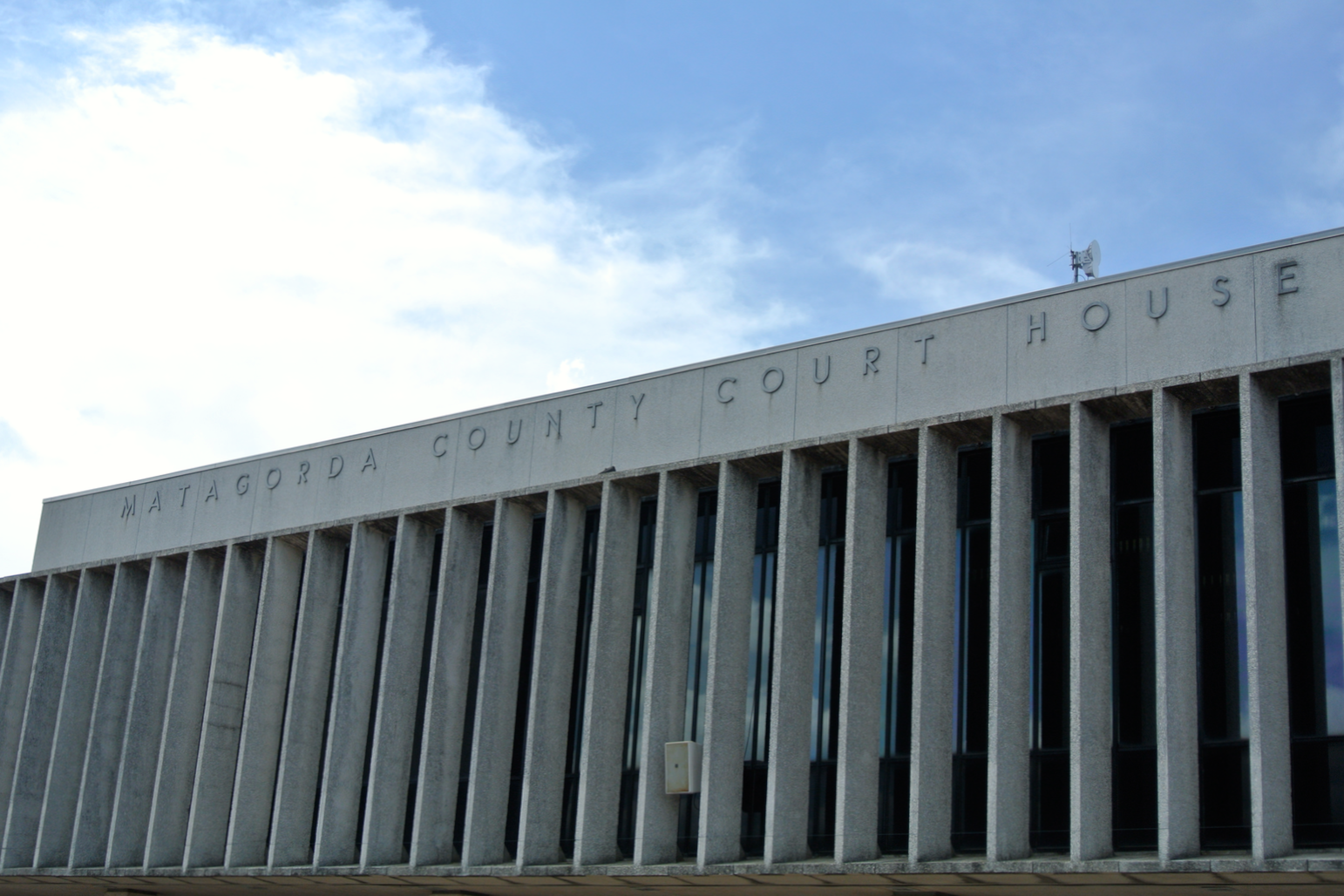 The eastern façade, on Avenue G 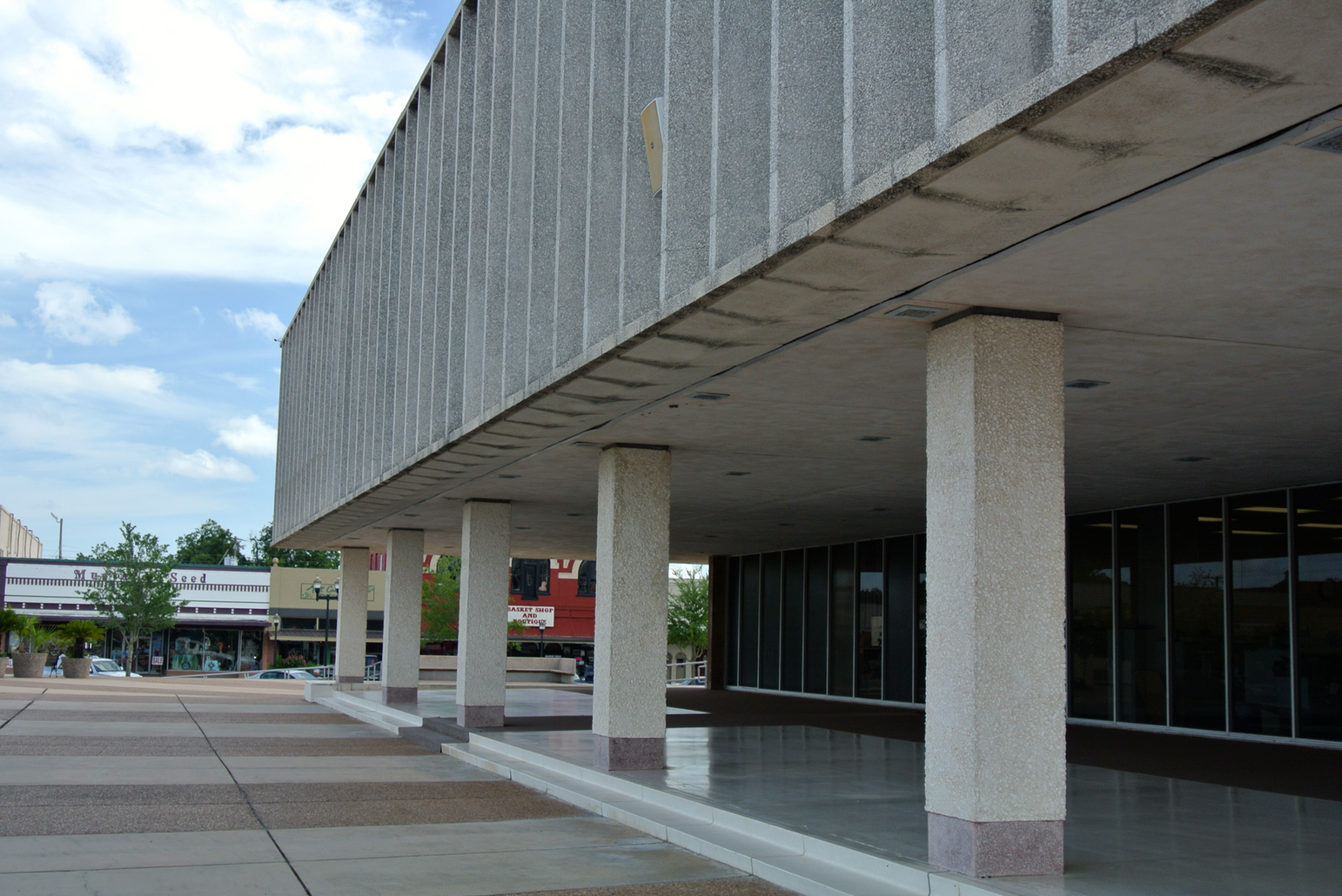 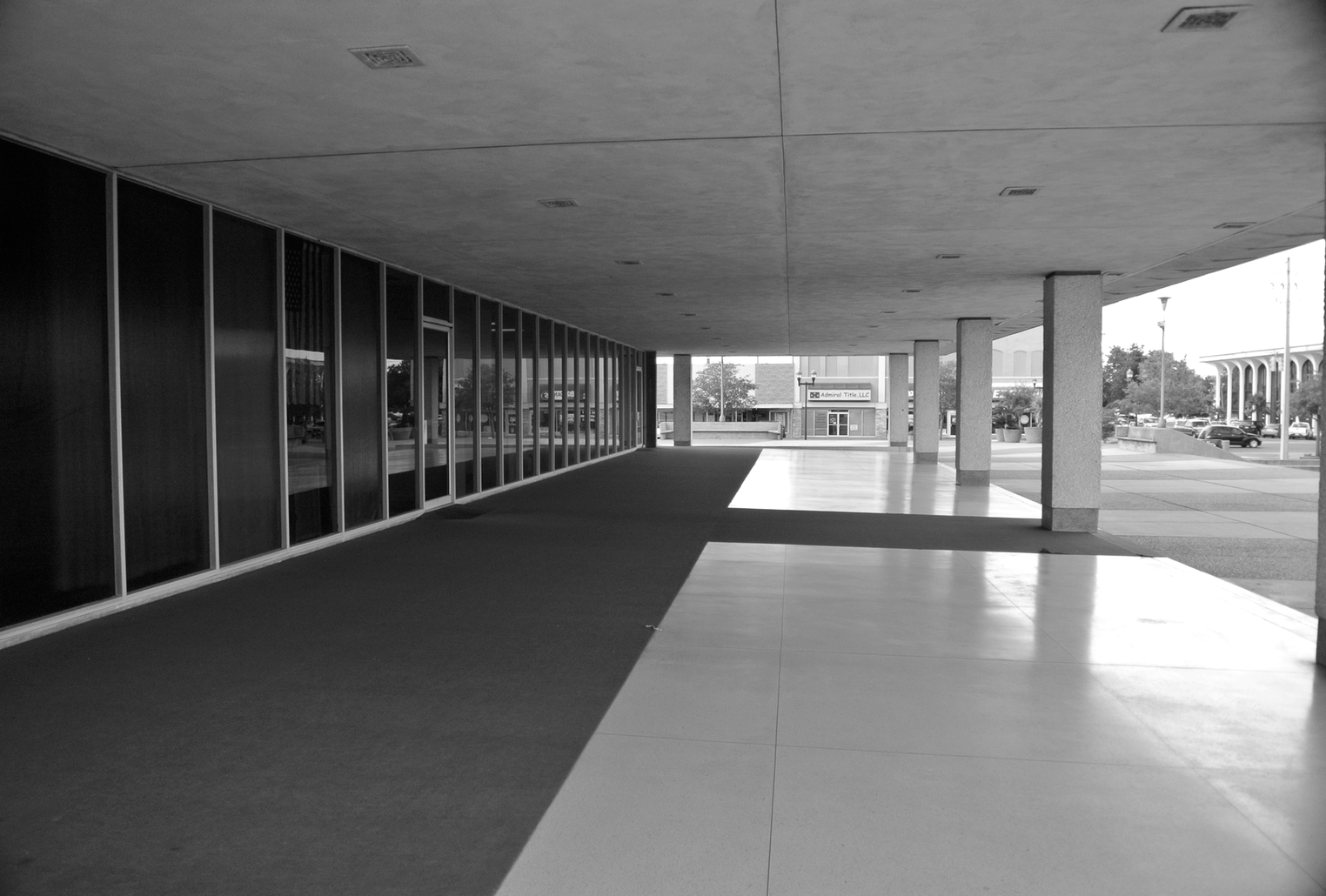 The view from the eastern side

The main façade, on 6th Street 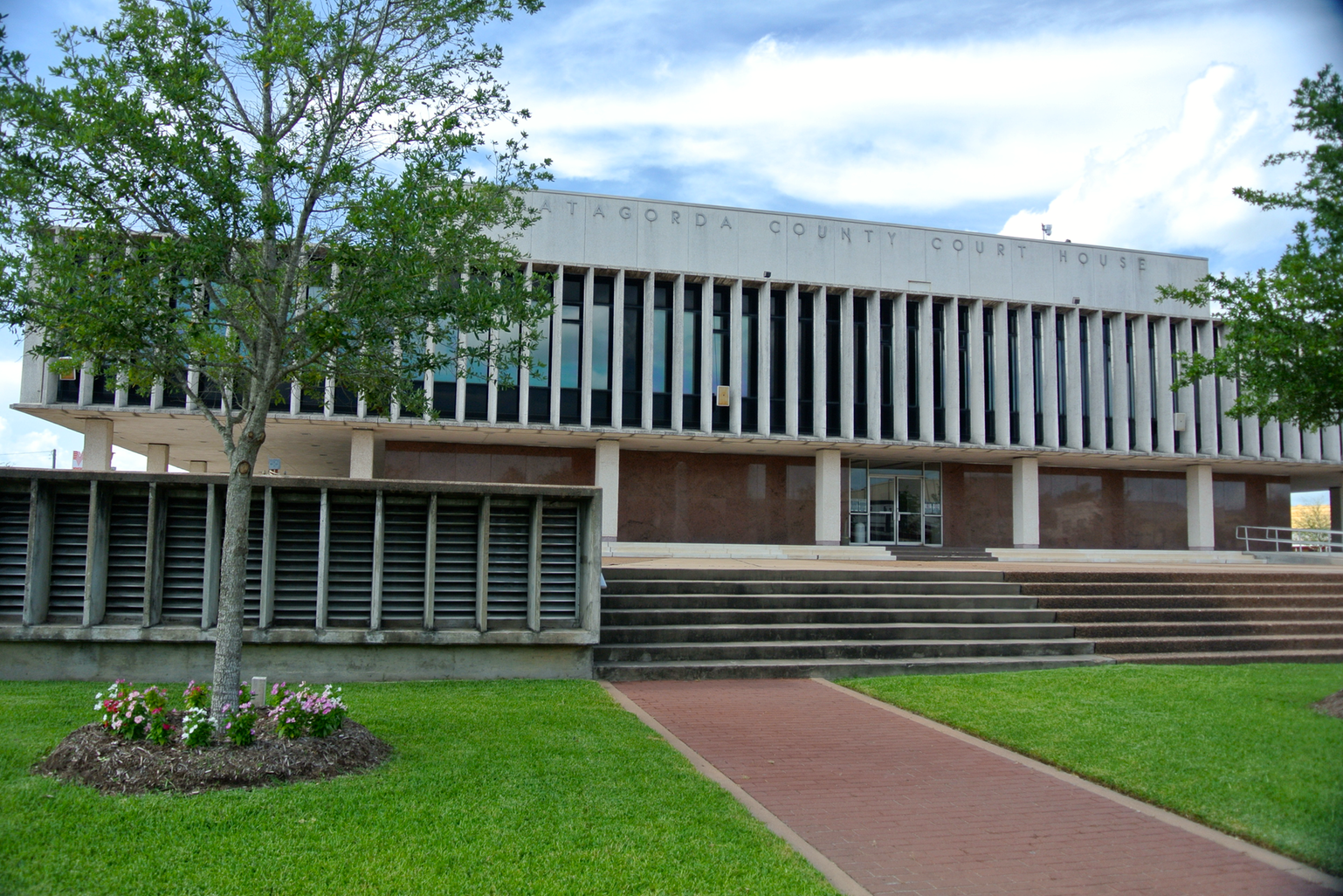 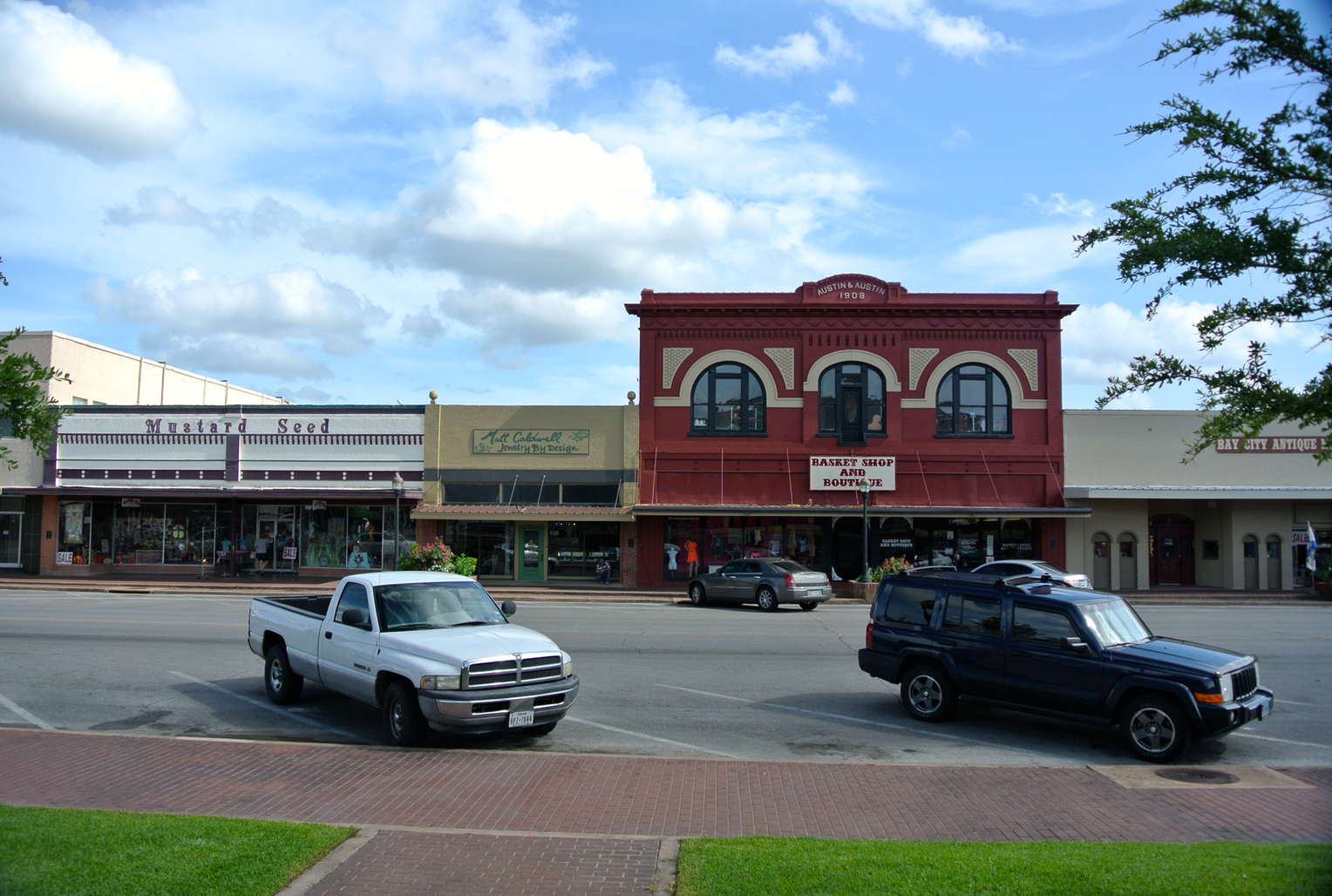 The view of 6th Street from the southern doors 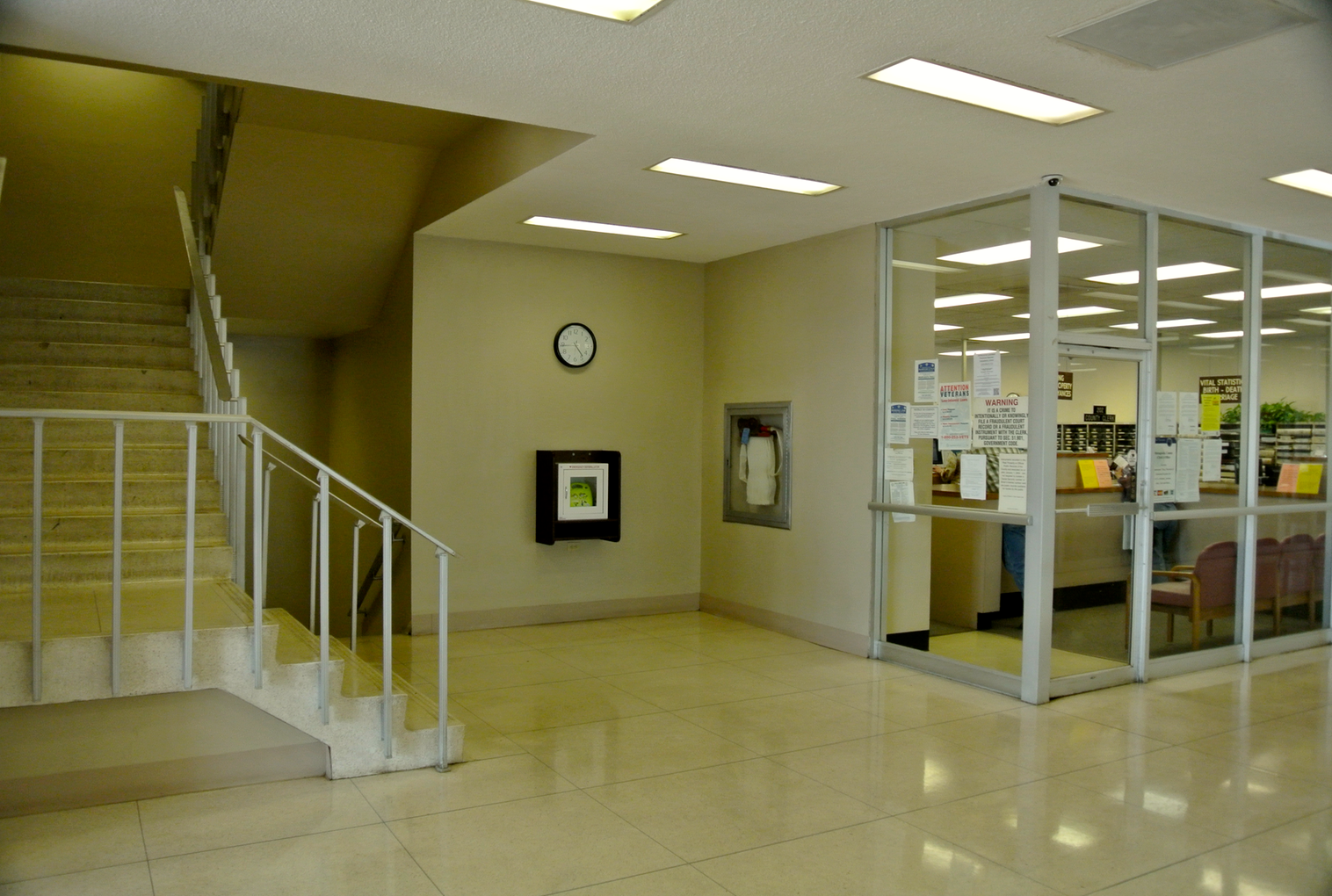 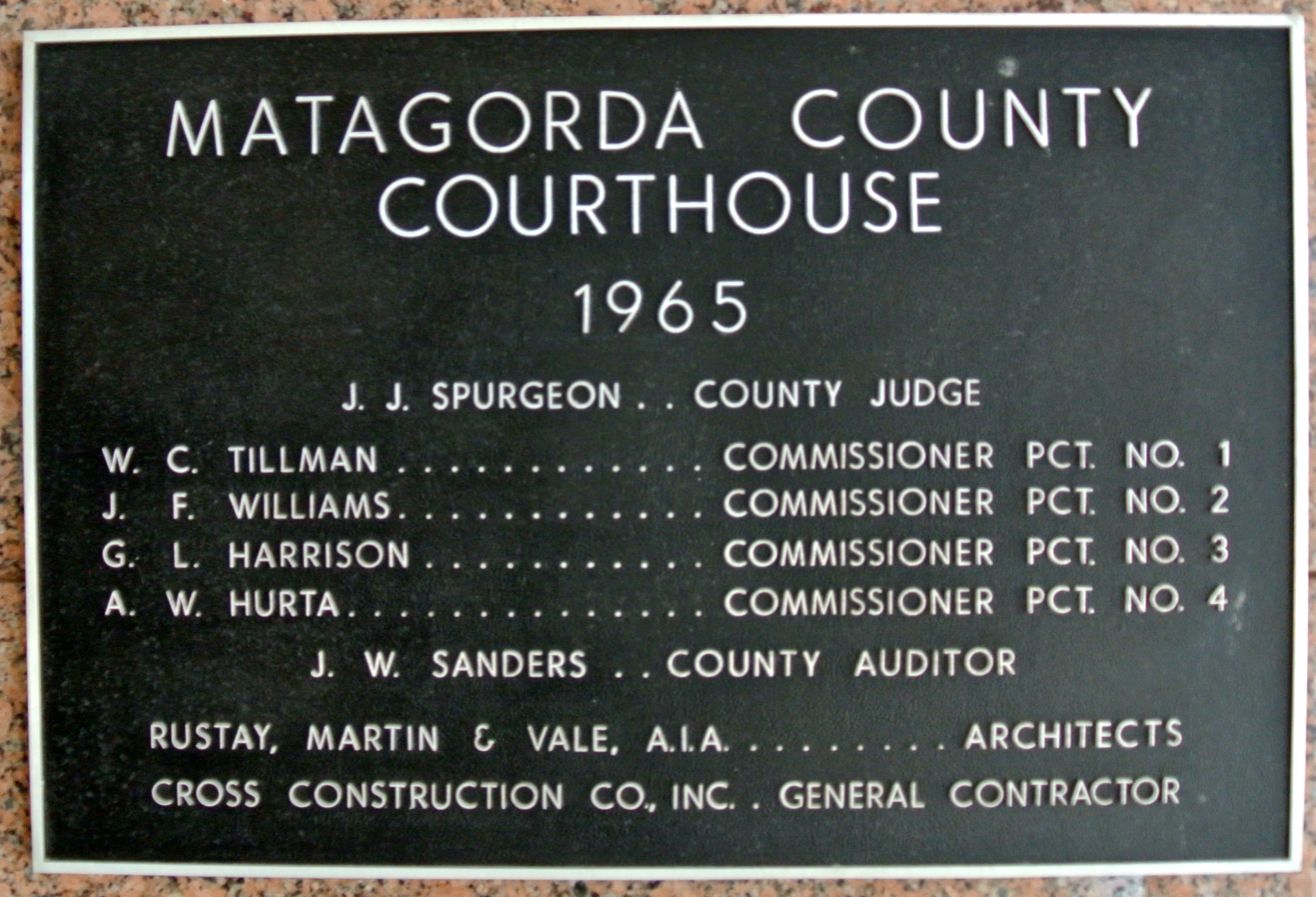