“Brazoria County, on the prairie of the Gulf Coast at the mouth of the Brazos River in Southeast Texas, is bordered by Matagorda, Fort Bend, Harris, and Galveston counties. It covers an area of 1,407 square miles. Its highest altitude, Damon Mound, is 146 feet above sea level.”

“The area was first populated when Stephen F. Austin selected it for his proposed settlement, and eighty-nine of Austin’s Old Three Hundred had grants in what is now Brazoria County by 1824. The earliest communities were Velasco (at the site of present Surfside), East Columbia (originally known as Bell’s Landing or Marion), Columbia (later West Columbia), and Brazoria.”

“Brazoria County became part of the Victoria district when Austin’s original San Felipe district was divided in two in 1826. In 1832 the legislature of Coahuila separated Brazoria Municipality from San Felipe and made Brazoria its capital. Brazoria Municipality was the scene of the battle of Velasco on June 26, 1832, and witnessed other agitation against Mexican rule. In 1833 county residents suffered both flood and cholera, but in 1834 population in the municipality reached 2,100, and prosperity returned. A decision was made to change the name of the municipality from Brazoria to Columbia, to make Columbia the seat of government, and transfer some territory to Matagorda Municipality.”

“Under the provisional government [post Teas Revolution], Texas accepted the constitution that made its first counties from former municipalities. Brazoria County, among the first, took its name from the Brazos River when the Congress of the republic established it on March 24, 1836. Brazoria, which became county seat when the county was organized on December 20, 1836, served until 1896, when Angleton replaced it. The establishment of Fort Bend County in 1837 and of Galveston County in 1838 drew the present county boundaries, and the towns of Columbia, Velasco, and Brazoria were incorporated by the Congress of the republic in 1837.” 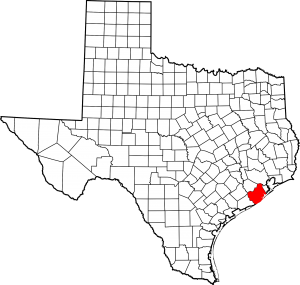 “Between 1849 and 1859 plantation life in Brazoria County flourished, and the county became the wealthiest in Texas, with a typically Southern society based on slavery. Agriculture was the foundation of the county’s early economy, and some of the state’s largest and most prosperous sugar and cotton plantations grew up along the rivers and deeper creeks on which crops could be shipped by barges. Plantations in the county between 1850 and 1860 numbered forty-six, including nineteen sugar, sixteen cotton, and three that produced both sugar and cotton. Before the [Civil] war, these plantations produced an average of 7,000 to 8,000 hogsheads of sugar annually, and up to three-fourths of the state’s output in 1857.”

“Though the county suffered little physical damage in the [Civil] war, the presence of federal troops and loss of profit from cotton crops in 1864 brought increasing hardship. Some plantations were destroyed, and agricultural production declined sharply with the freeing of the slaves. David G. Mills alone lost 313 slaves as a result of emancipation. County land was valued at more than $3 million in 1860, but its value had declined to less than $2 million by 1866. During the same period, total property value in the county fell from almost $7 million to less than $3 million.”

“Economic recovery came slowly in the post-Civil War era. The principal crops were corn, grains, sweet and Irish potatoes, fruits, wild grapes, and cotton and sugar for export. Sugar production, reduced in the early years of Reconstruction, burgeoned with the use of convict labor by 1871, but never again reached earlier levels. By 1867 the value of livestock, chiefly cattle, nearly equalled that of agriculture.”

“Between 1900 and 1930 Brazoria County was described as a cattle-raising area, with some oil and sulfur production, dairying, and diverse farming. The dairy industry, centered around Alvin, peaked between 1910 and 1930, and cotton culture in 1920. Corn culture concentrated near Sweeny, Brazoria, Damon, Danbury, and Angleton, stock farming around Alvin, truck farming in the Sweeny area, figs and poultry near Alvin and Angleton, and pecans around Sweeny and East Columbia.”

“The population of Brazoria County became more homogeneous during the twentieth century. After 1900 the white population grew steadily. By 1920, as blacks began to leave for employment in northern cities, the county had twice as many white as black residents. A typical county resident at the turn of the century was born either in the lower South or within the state of Texas.”

“Small farms in Brazoria County increased through the 1930s and 1940s, and farmers increasingly raised crops as tenants rather than landowners. By 1945 agribusiness had appeared; fewer than 7 percent of all farms accounted for almost 70 percent of farm income, and more than 50 percent of farms made less than $1,000 annually. At the same time, the county ranked eighth in Texas cattle production, with 69,437 head, and farmers turned to the Brahman breed. Overall farm production peaked in the 1950s, with 130,000 acres of cropland harvested.”

“By the 1980s the county had 186 manufacturing establishments that employed almost 18,000 workers. In the 1990s, when the county had more than 41,000 acres of rice in production, the chief agricultural products were rice, cattle, cotton, corn, small grains, forage, and truck crops, with some sorghum, soybeans, and horses. The Brazoria-Galveston Soil Conservation District promoted adequate drainage to allow cultivation.”

“Brazoria County offers water sports, fishing, hunting, and other recreation, along with historic sites including Varner-Hogg Plantation State Historical Park. The county celebrates a San Jacinto Festival at West Columbia and the Spring Fling at Clute in April; a Mexican Fiesta at Pearland and Youth Rodeo and Frontier Days at Alvin in May; a Fishing Fiesta at Freeport, a Fireworks Display at Alvin, and the Great Texas Mosquito Festival and Parade at Clute in July; a Founders Day Celebration at Pearland in September; and a County Fair and Rodeo at Angleton and the Bluegrass and Gospel Fall Festival at Brazoria in October.” 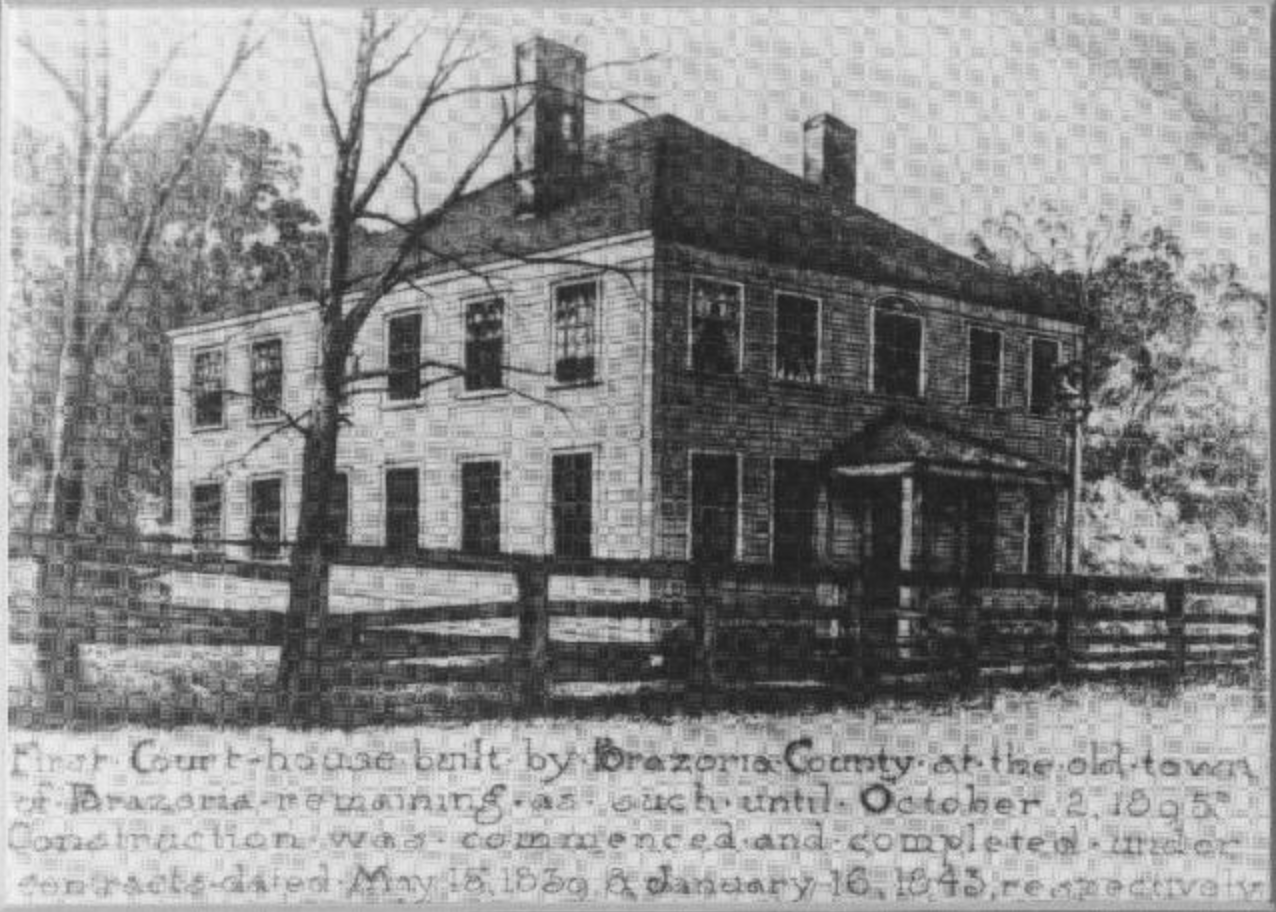 The county’s first courthouse, constructed three years after Texas Independence, stood in the first county seat of Brazoria. It was a relatively simple, wooden, two-storied building that was demolished in 1895. 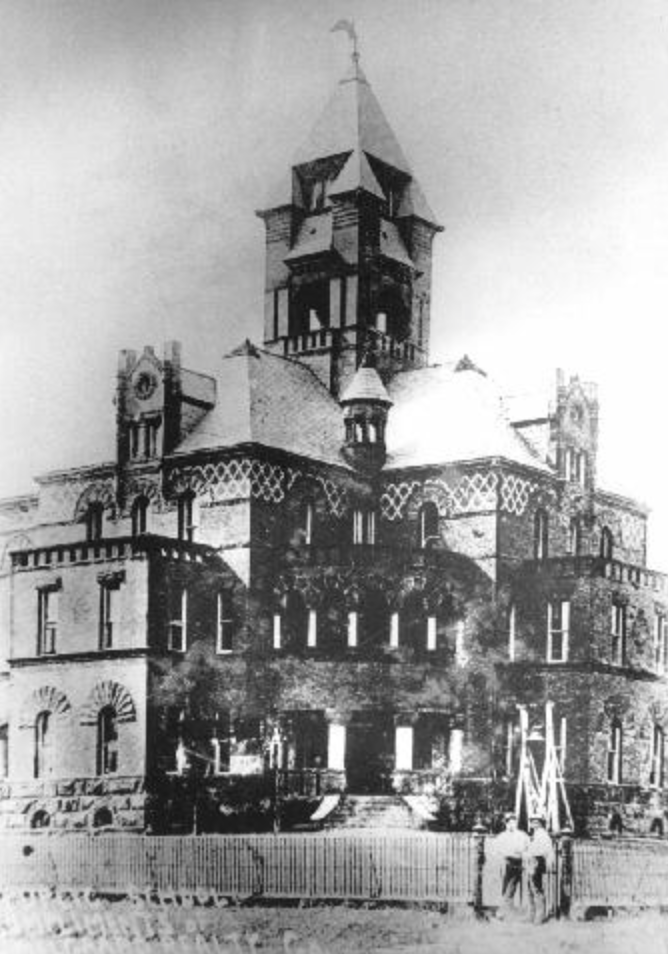 A masterful work of J. Riely Gordon, this building is described by the Texas Historical Commission as follows:

“The four-story building was decorated with granite columns and walls of red pressed brick with red sandstone trim. It formed a Greek-cross plan, with entrances at the reentrant angles and an open shaft opening into the tower. Only two years later, the county seat was moved to Angleton, and this building remained vacant for several years.”

Because this huge, beautiful courthouse was only used for a very short amount of time, it became locally known as the “Folly.” When a tornado wrought severe damage to it in the early 1900s, the county approved its demolition. Materials taken from the structure were used to pave roads in Brazoria County. 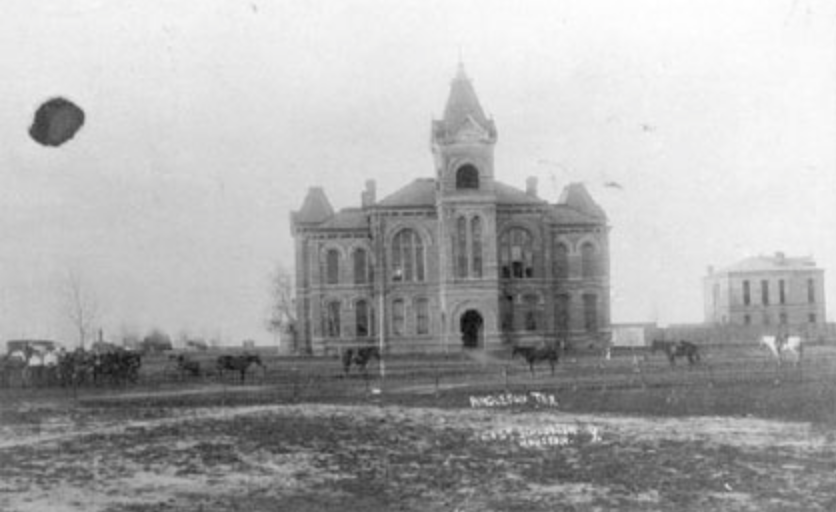 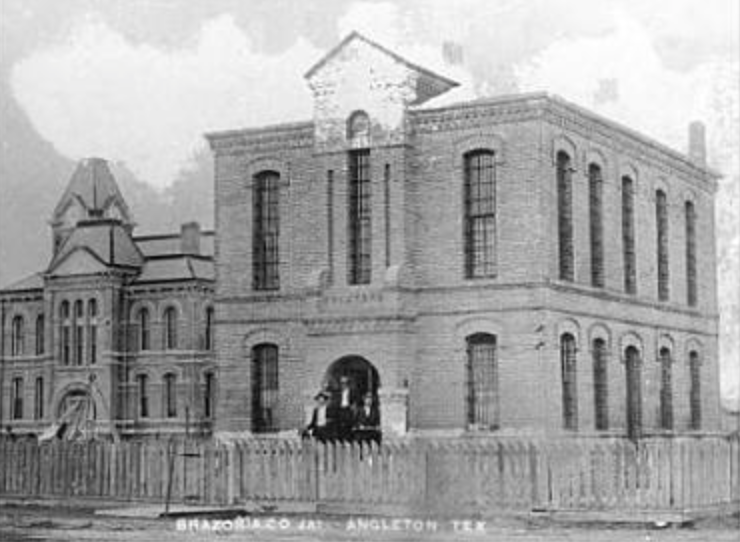 Eugene Heiner designed this Italian Renaissance building that served as the county’s courthouse from 1897 to 1940. In 1927, it went under renovation courtesy of the Houston architect J.A. Tempest. The effort he led consisted of removing the 90-foot tower, stuccoing the exterior, and adding on to the eastern, western, and southern sides.

The building still stands, albeit i its altered, 1927 form. Today, it houses the Brazoria County Museum. 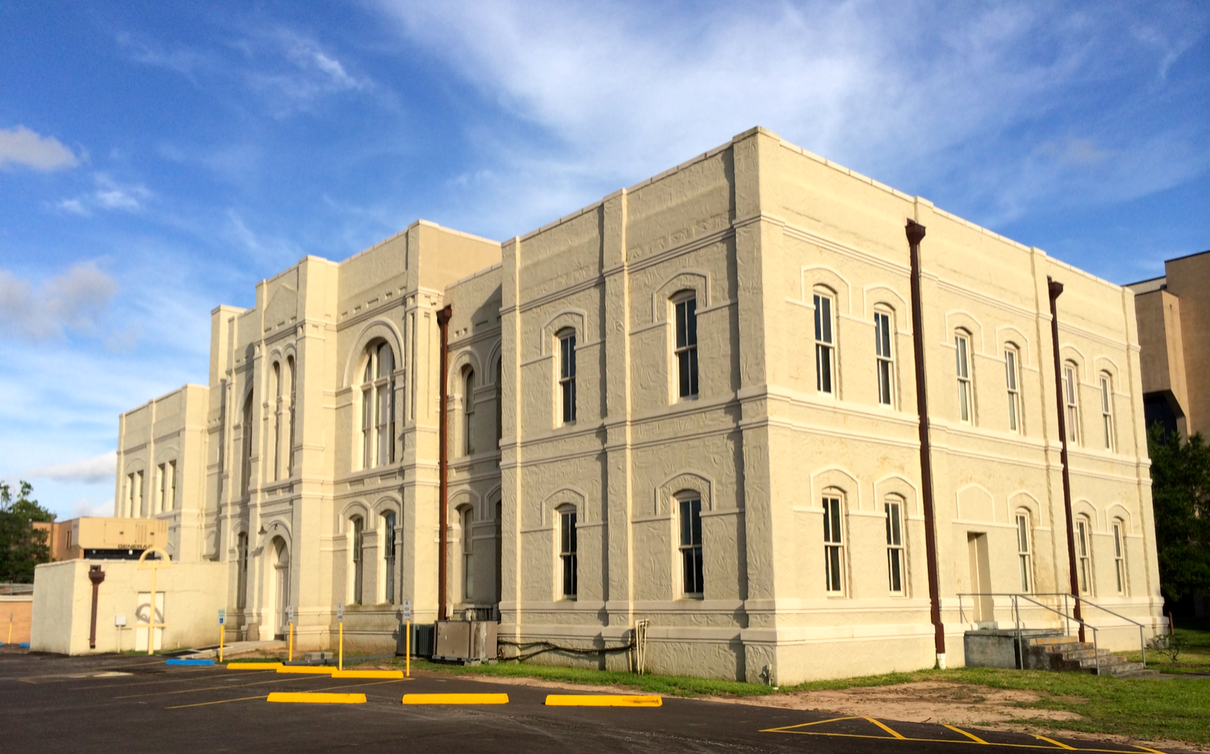 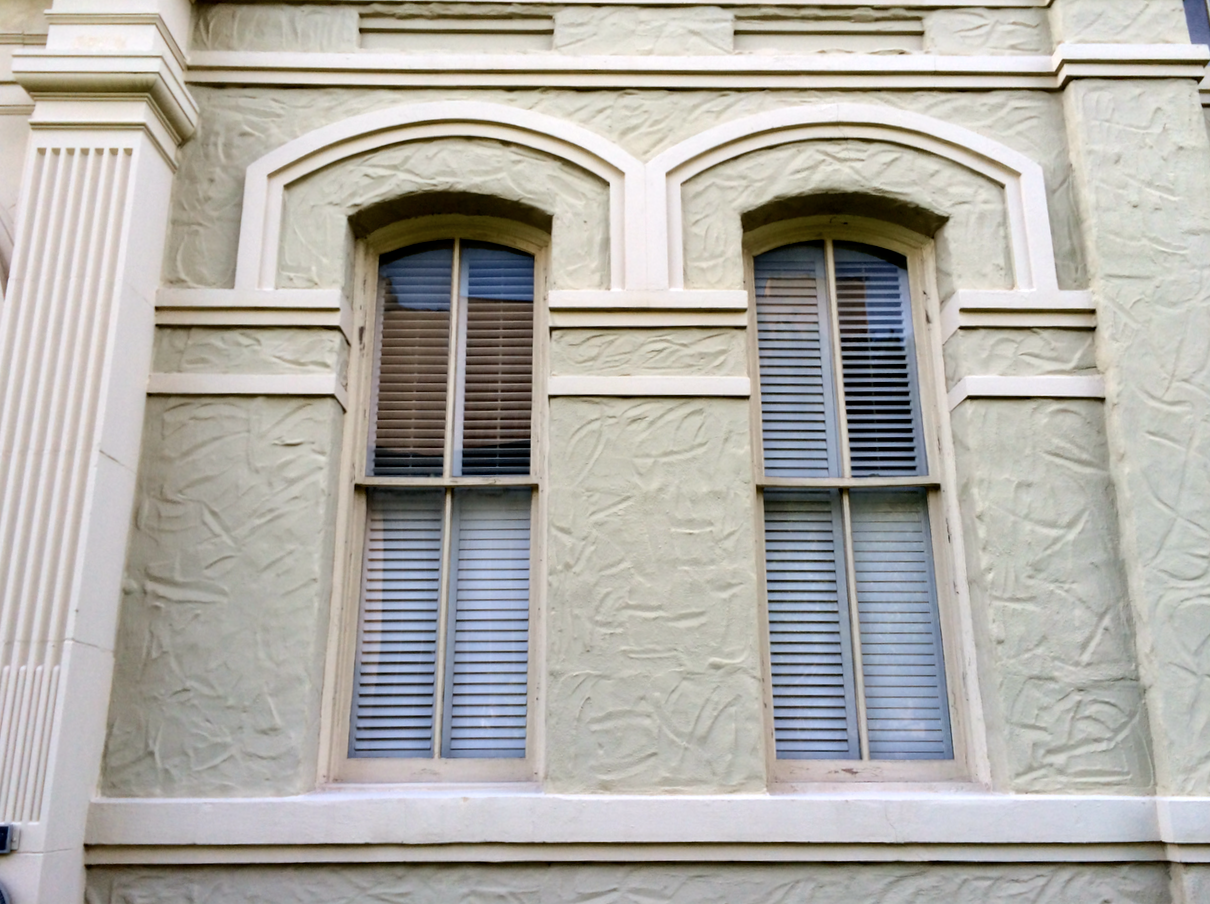 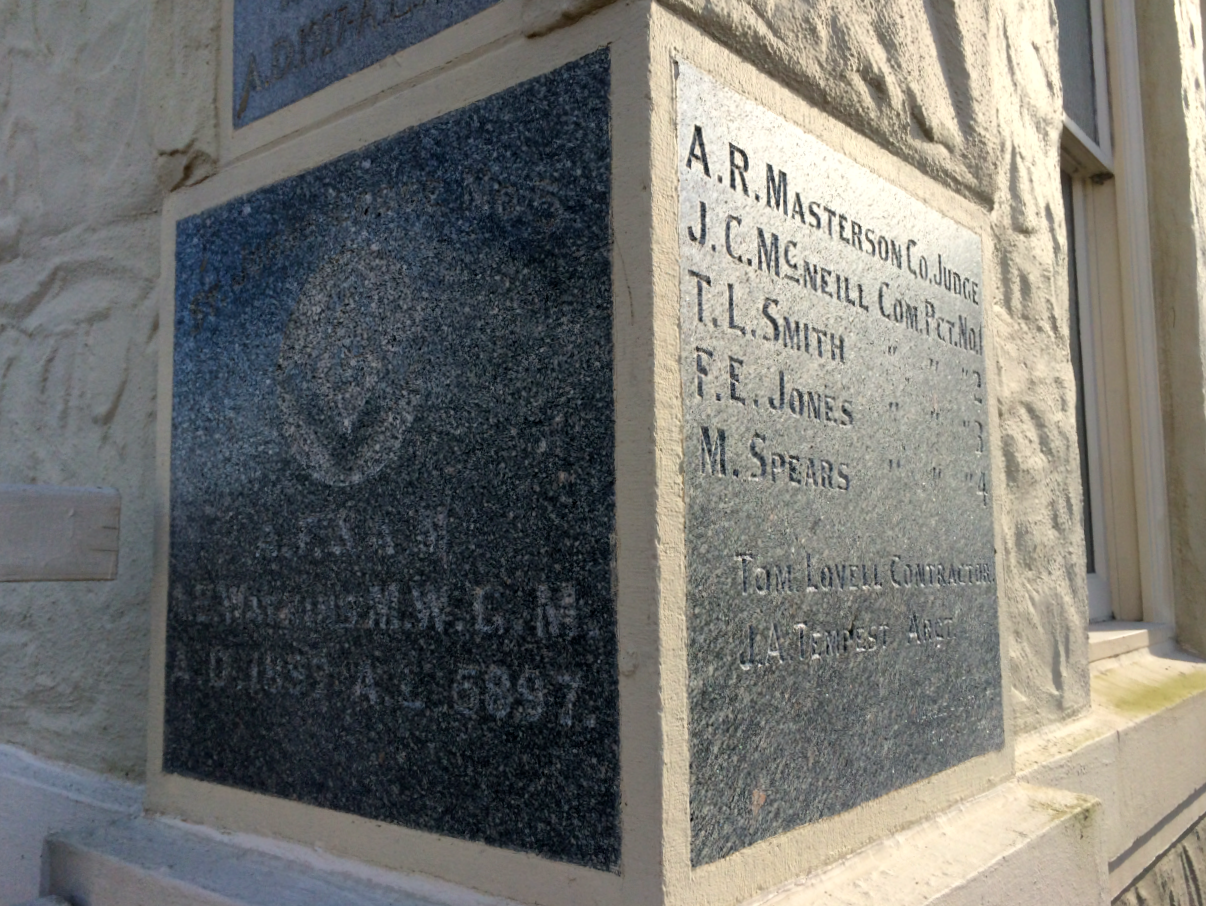 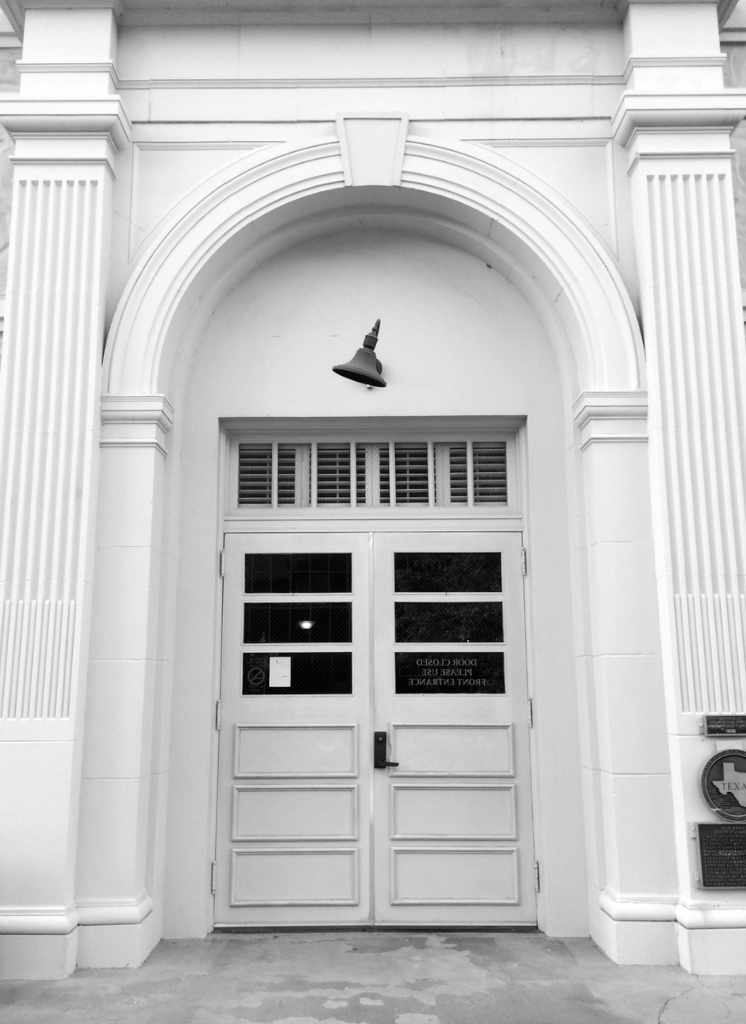 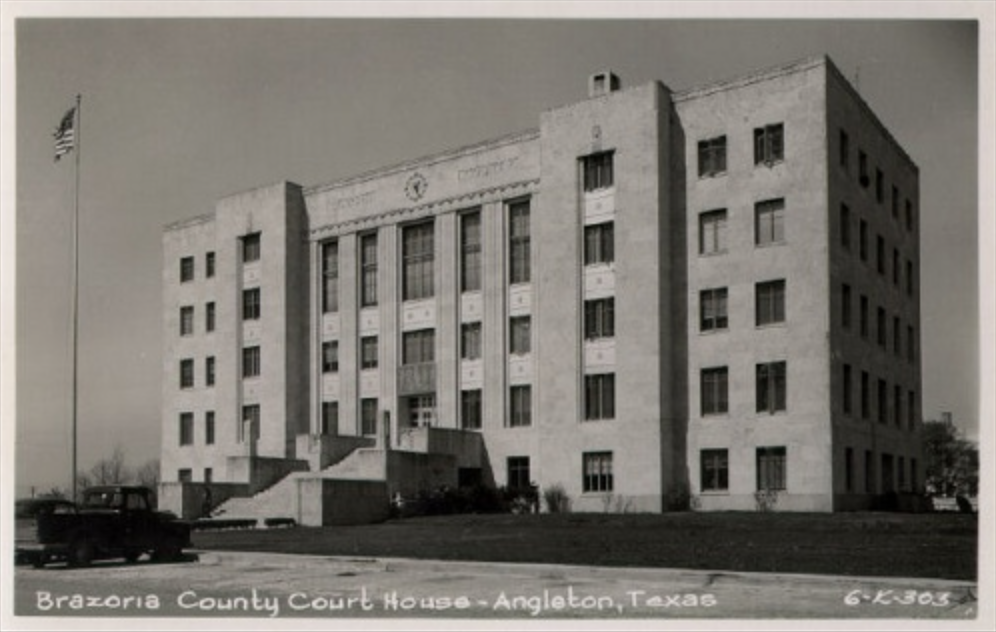 Out of Brazoria County history’s five courthouses, only two remain that function as they were originally intended to. This is the oldest of those two. Constructed in 1940 by Knutson Construction of Houston, this Moderne courthouse was designed by Lamar Q. Cato. He too was from Houston. 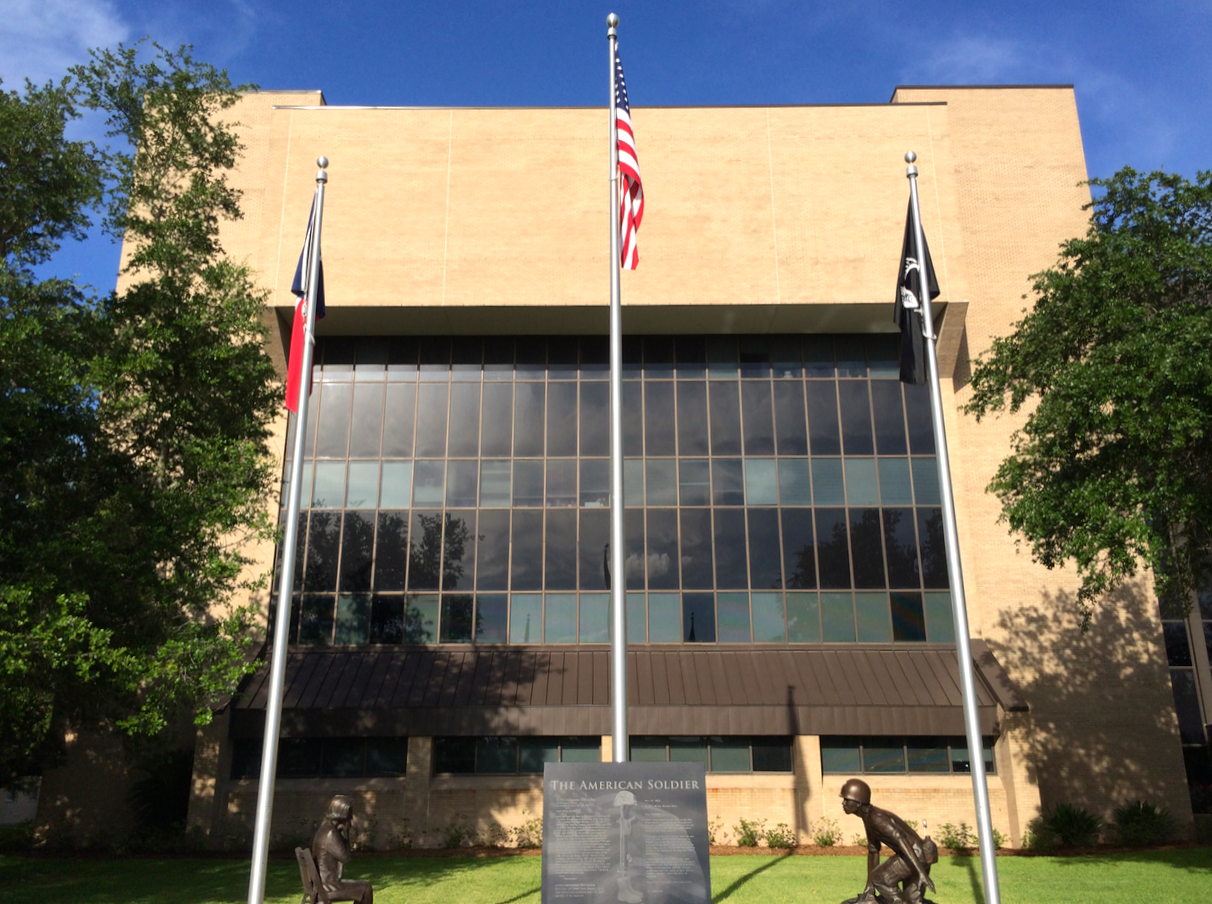 This is a peculiarity. While it is considered by some an entirely separate courthouse entity and by others simply an addition to the 1940 building, I know for certain that it is an eyesore. The monstrous, five-story building joins the 1940 one via a large atrium.

This is the scene as ones approaches the courthouse complex. That’s the 1897 one you see on the left. 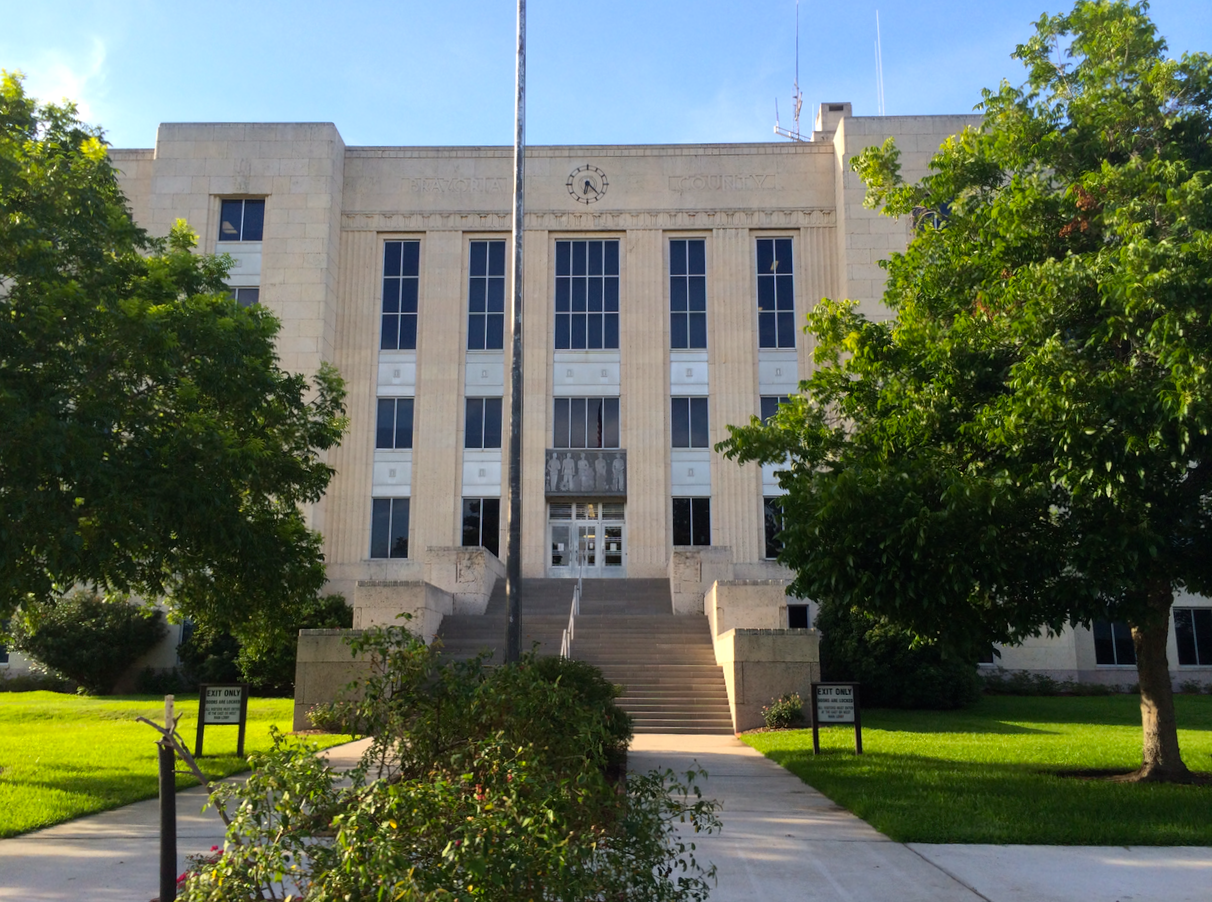 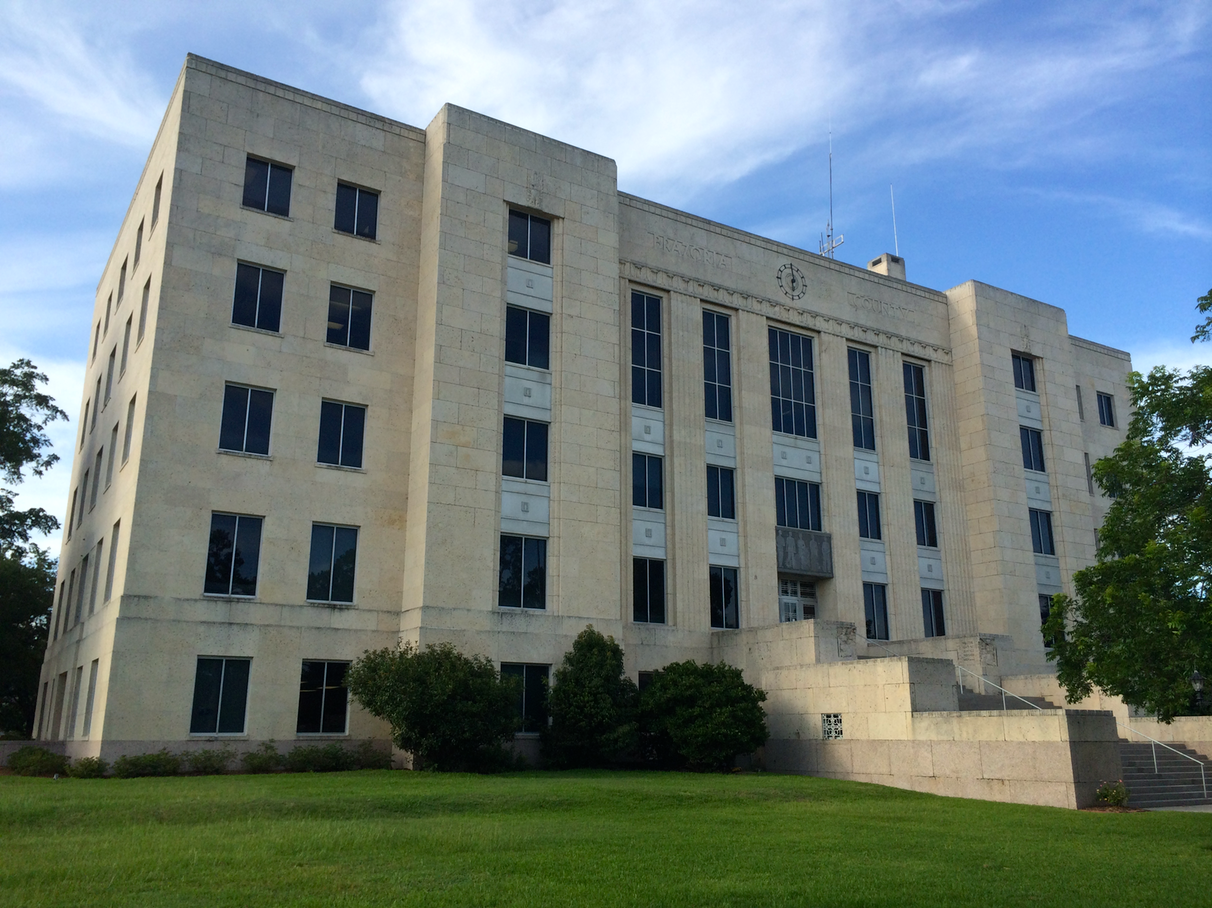 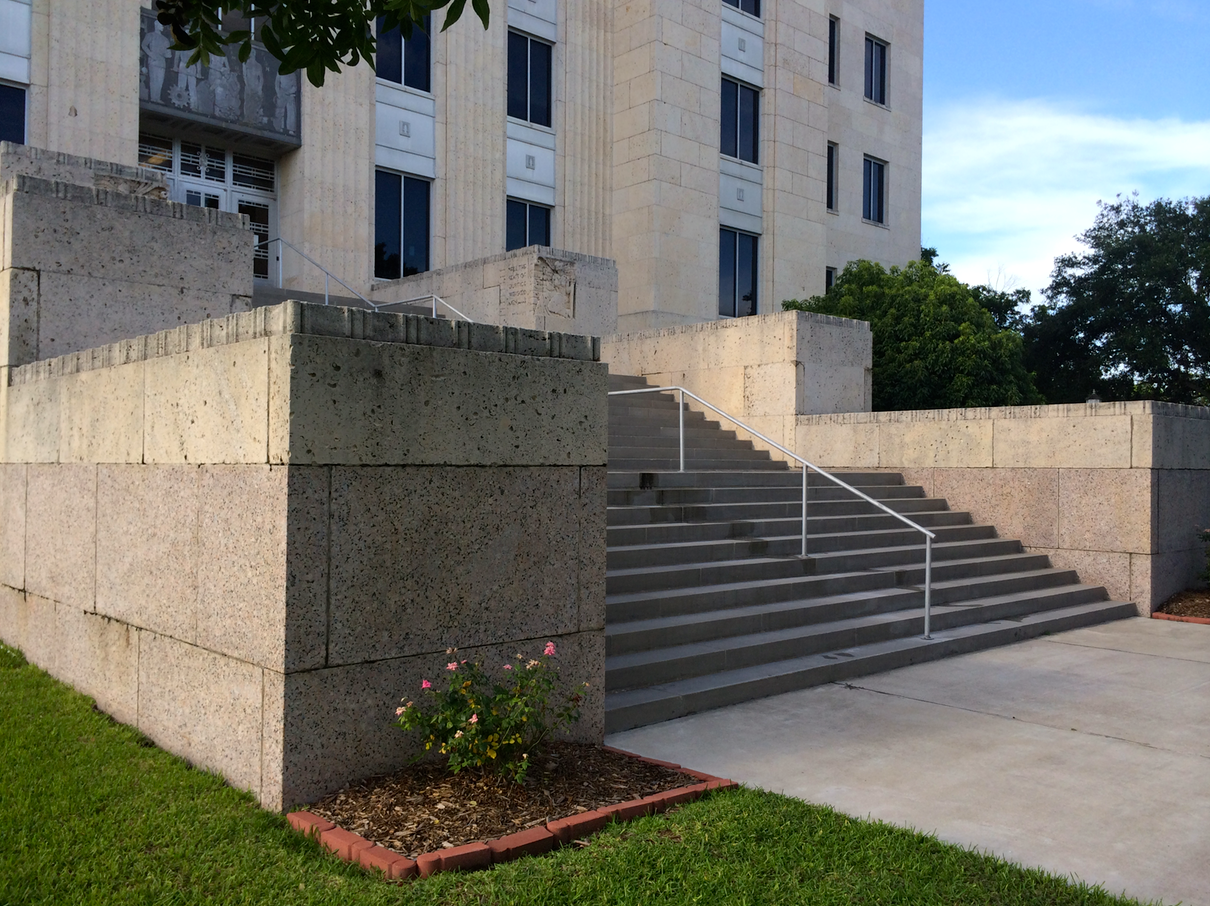 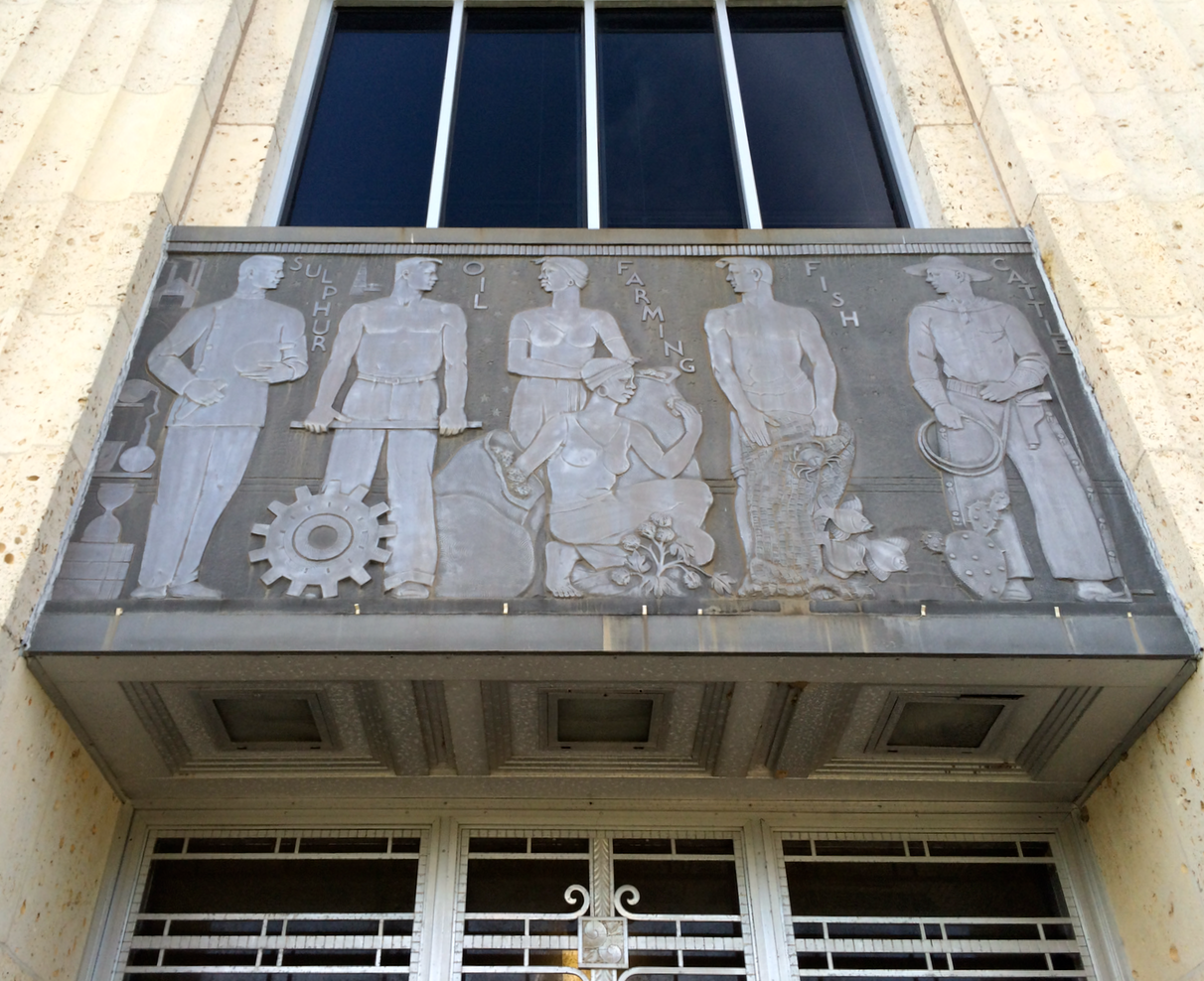 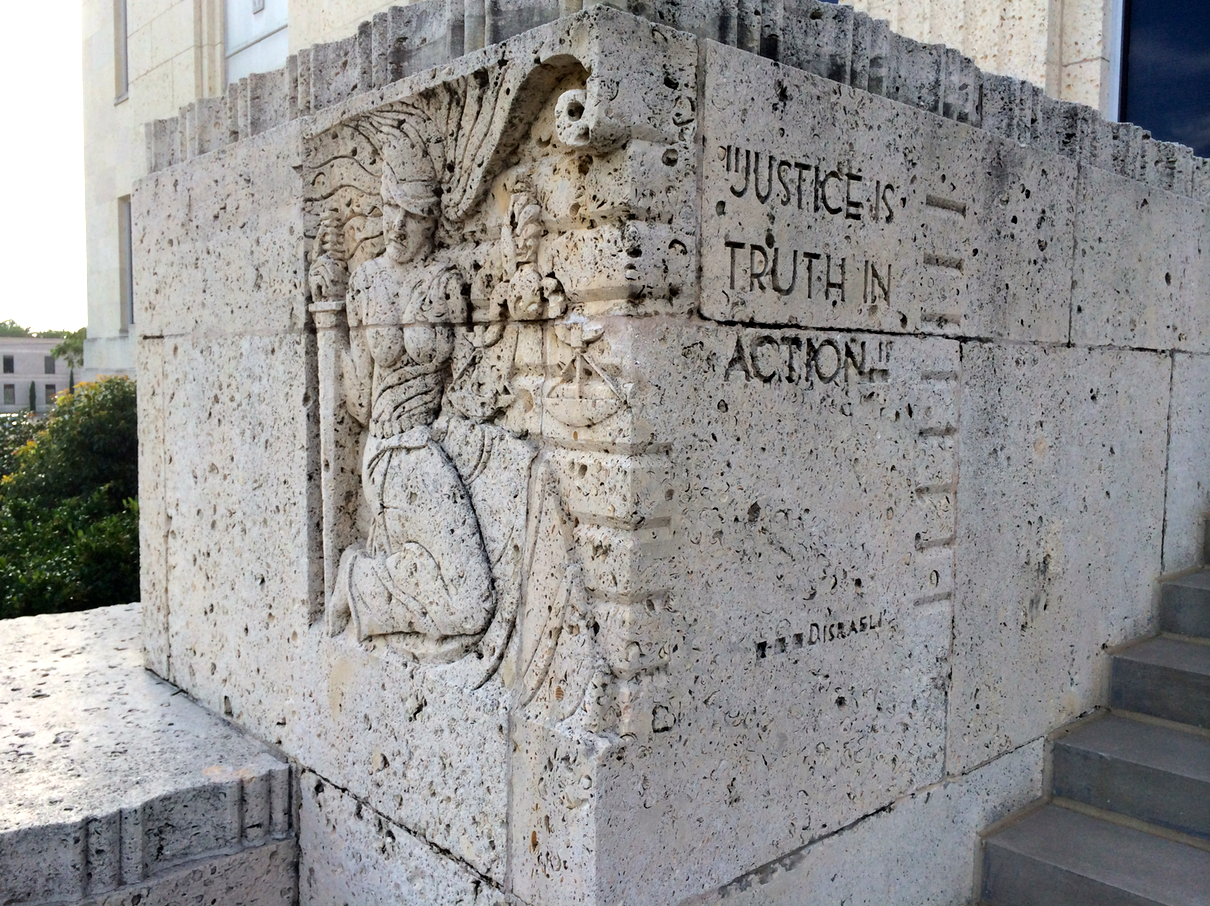 Detailed, carved friezes are one of the most welcomed features of the building. 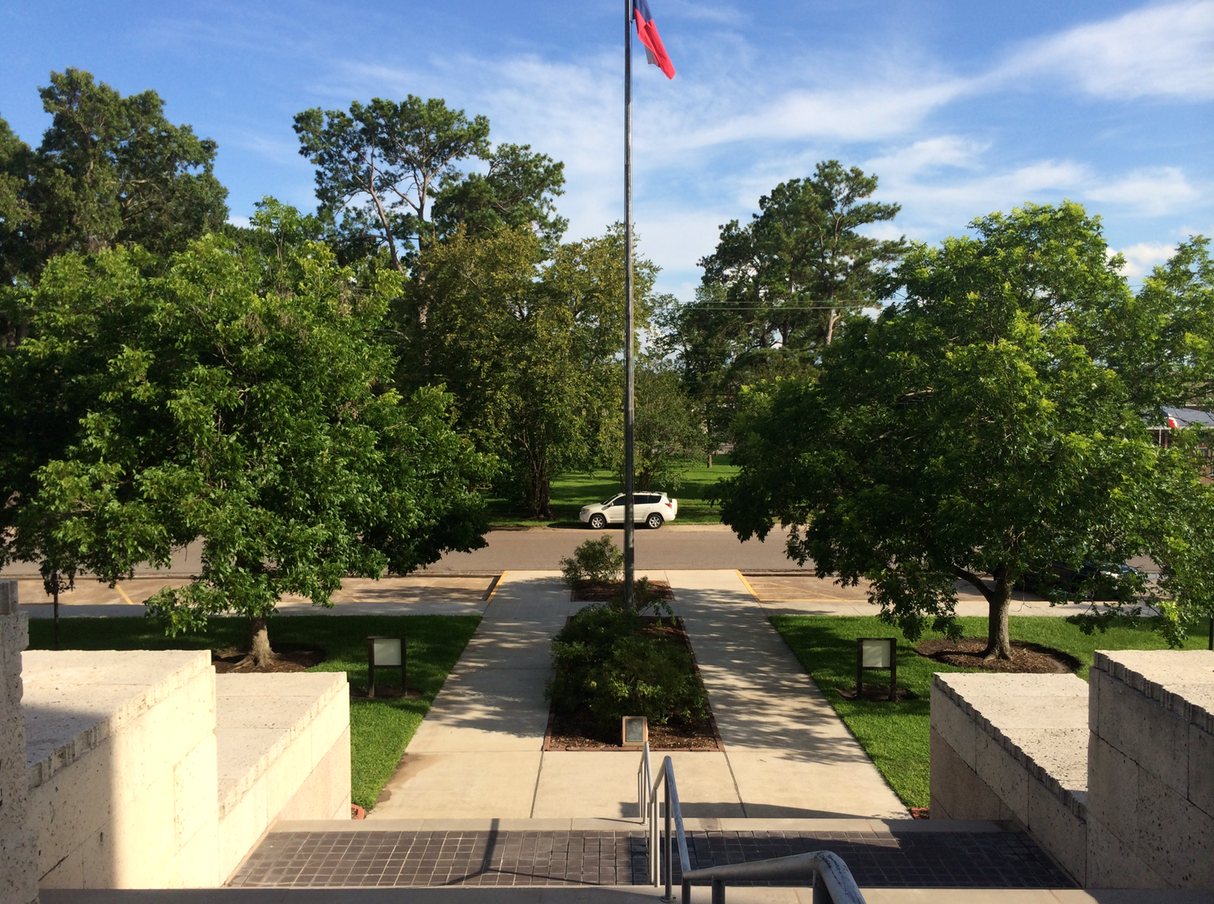 Locust Street, as seen from the southern doors 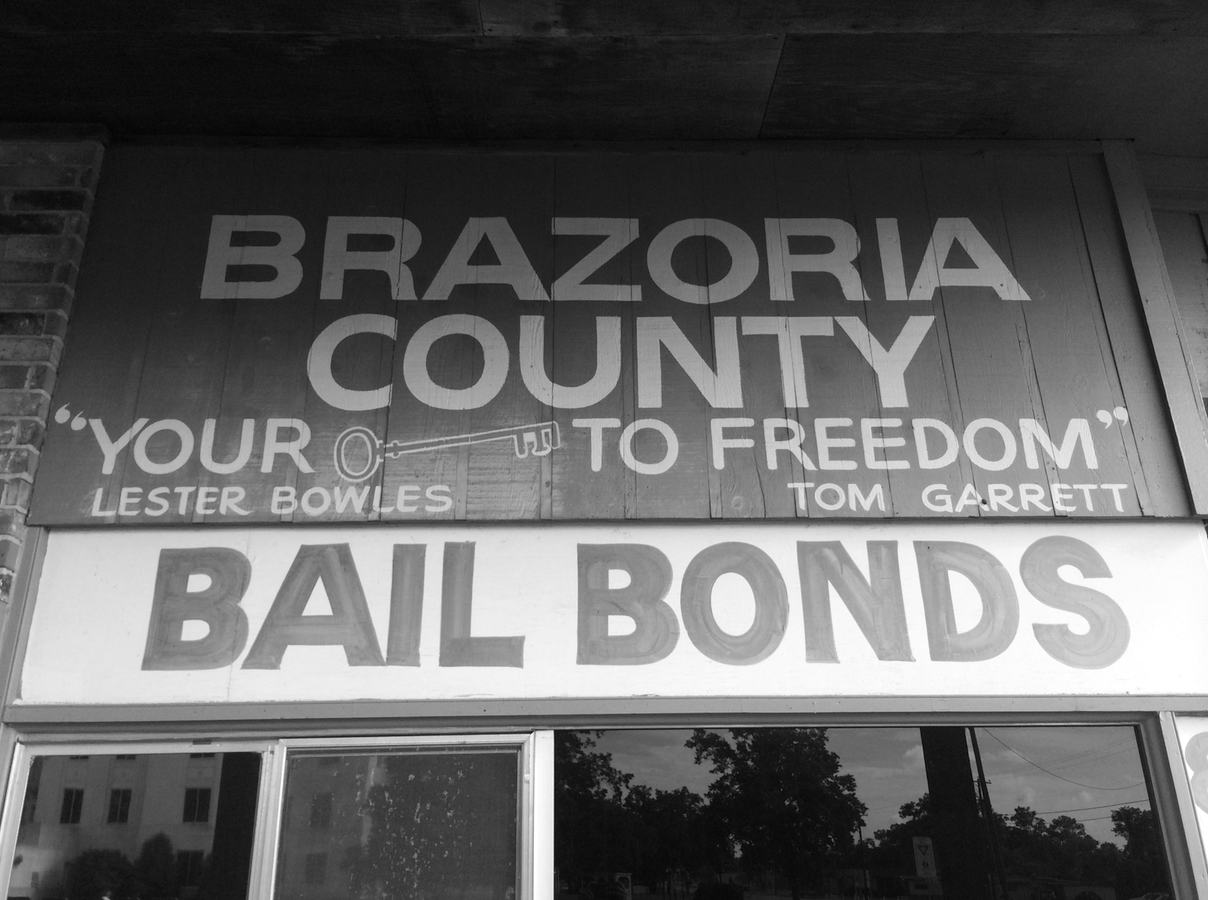 You can see the courthouse in the window of this Locust Street establishment. 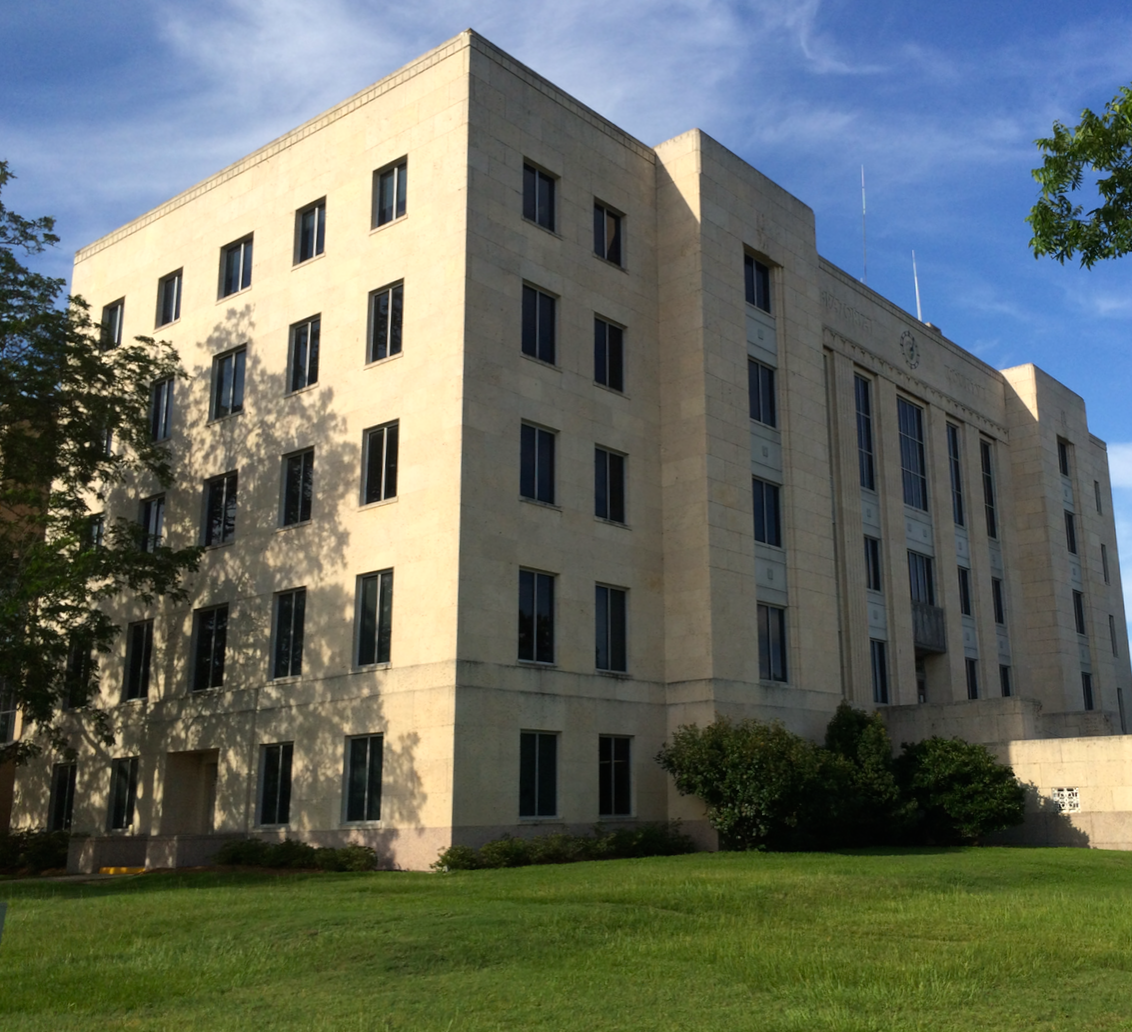 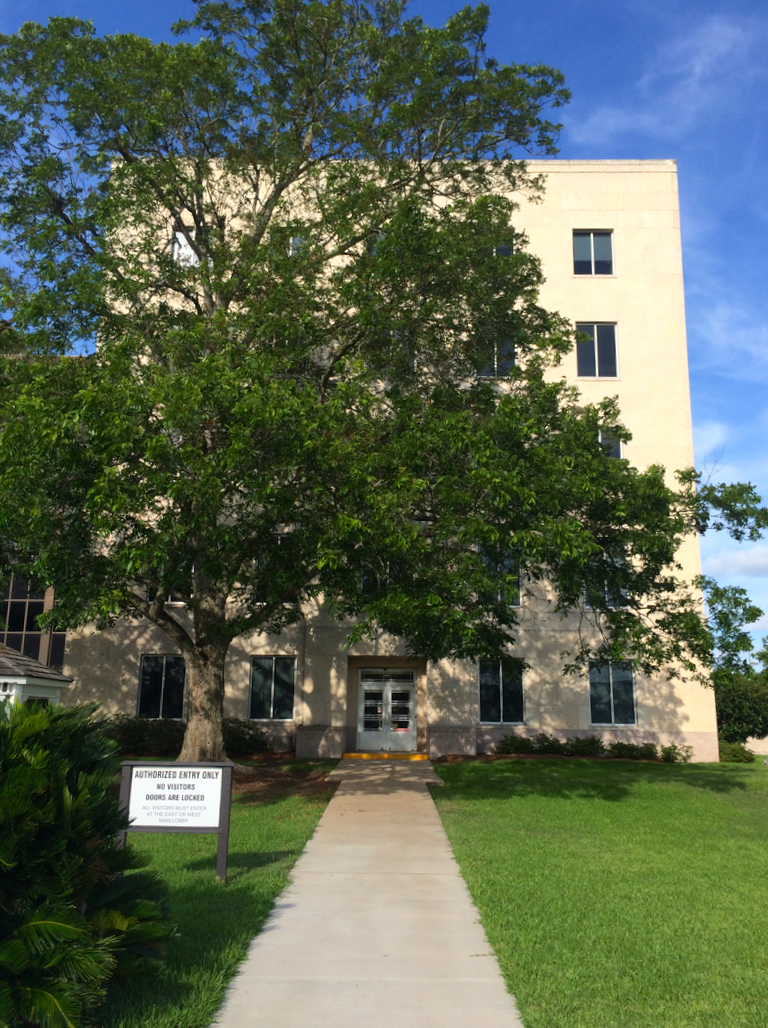 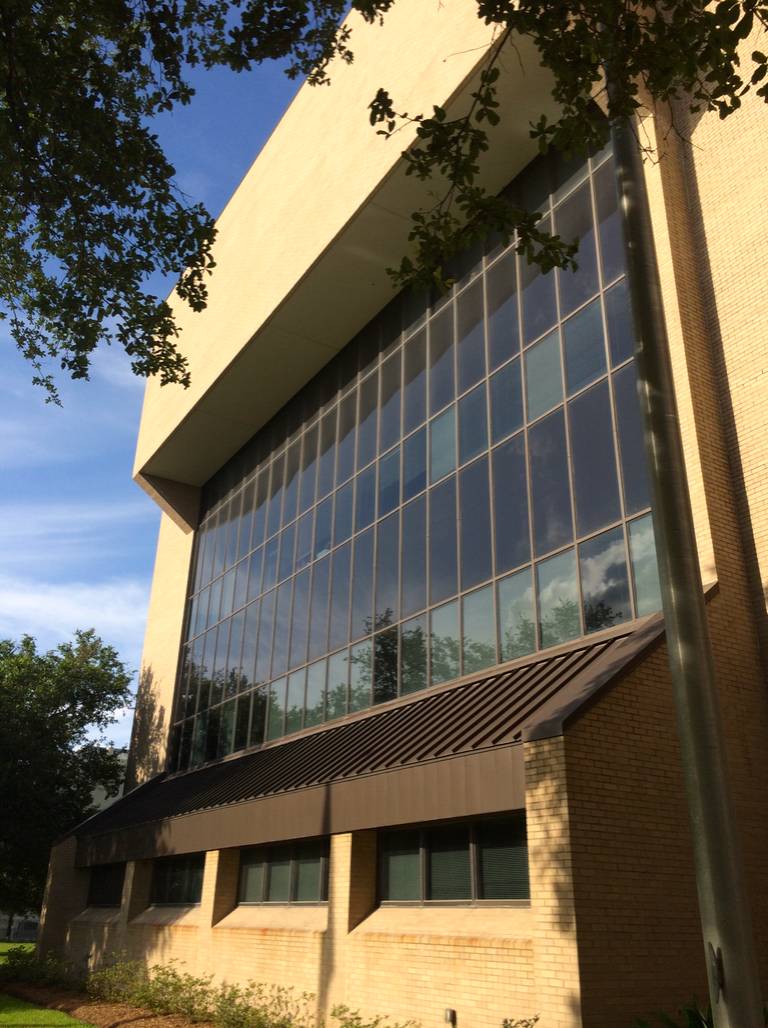 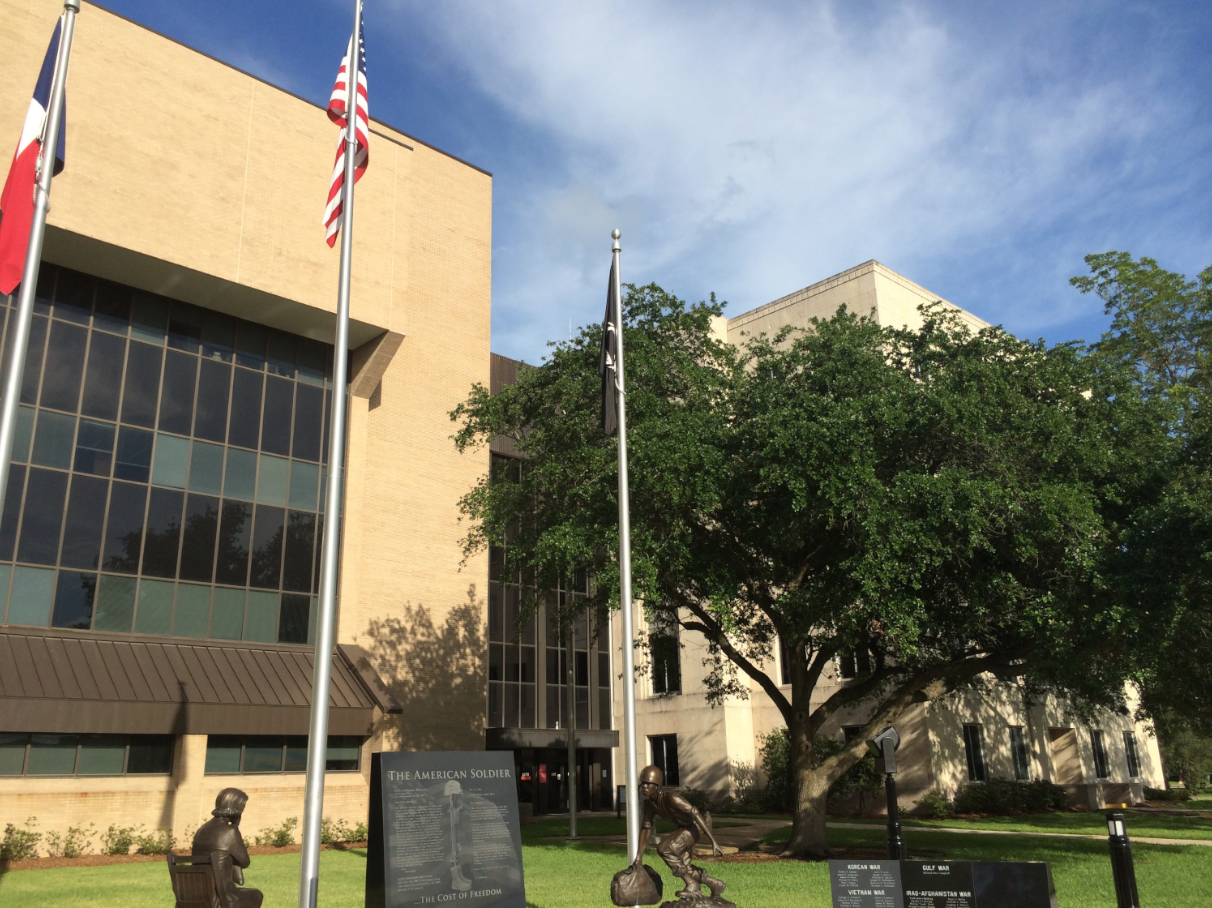 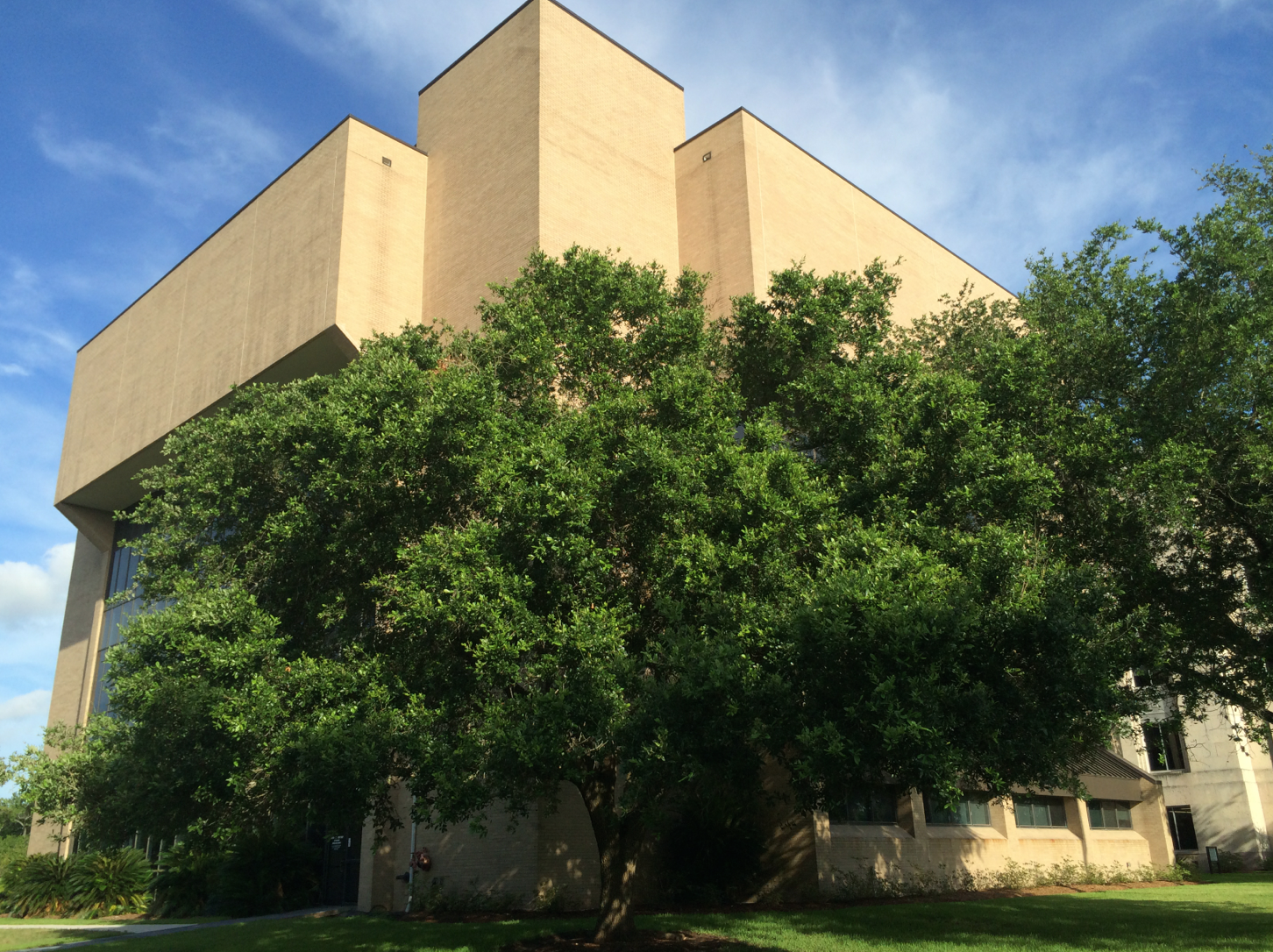 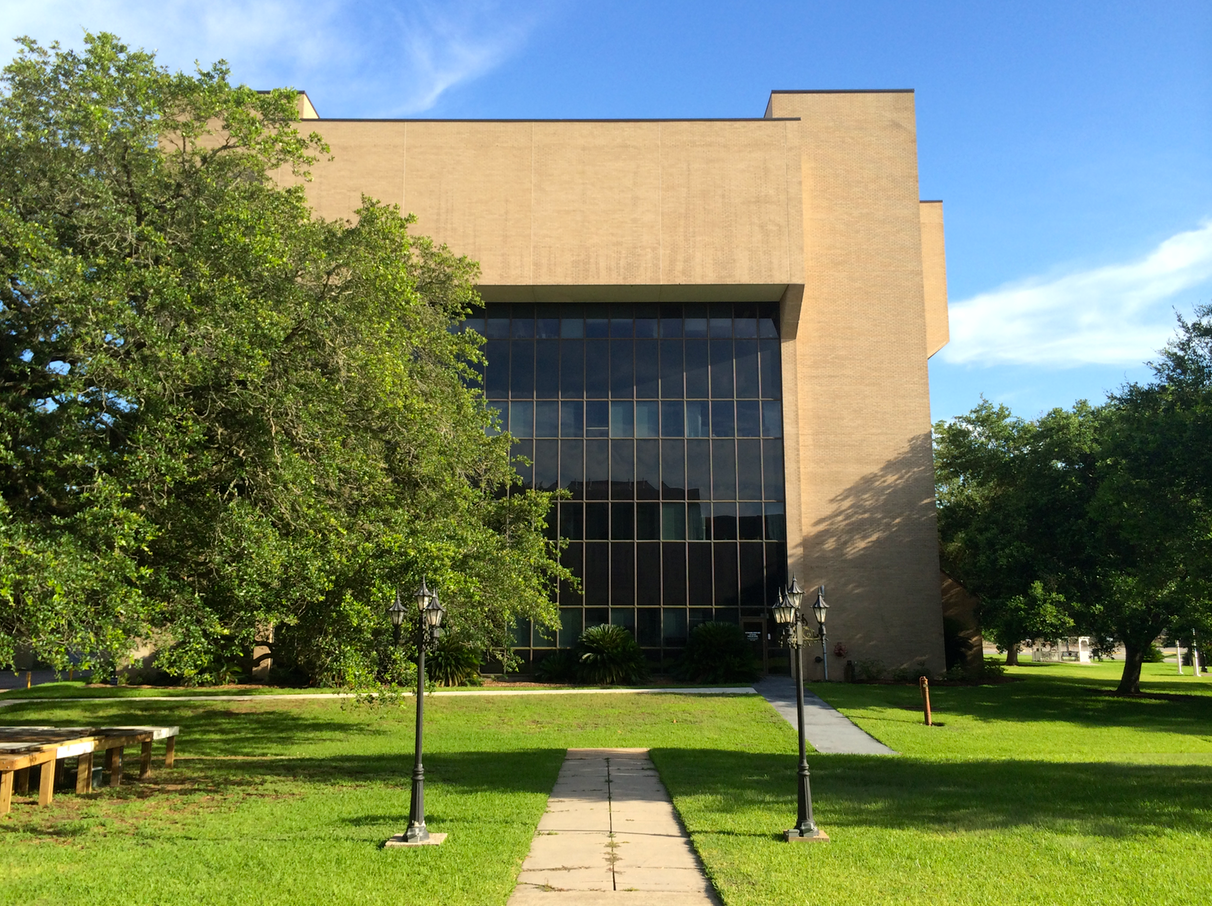 1976′s version, as seen from the doors of the Brazoria County Museum

Three courthouses, all in a row (the only occurrence of this in Texas)

The eastern doors to the 1976 building 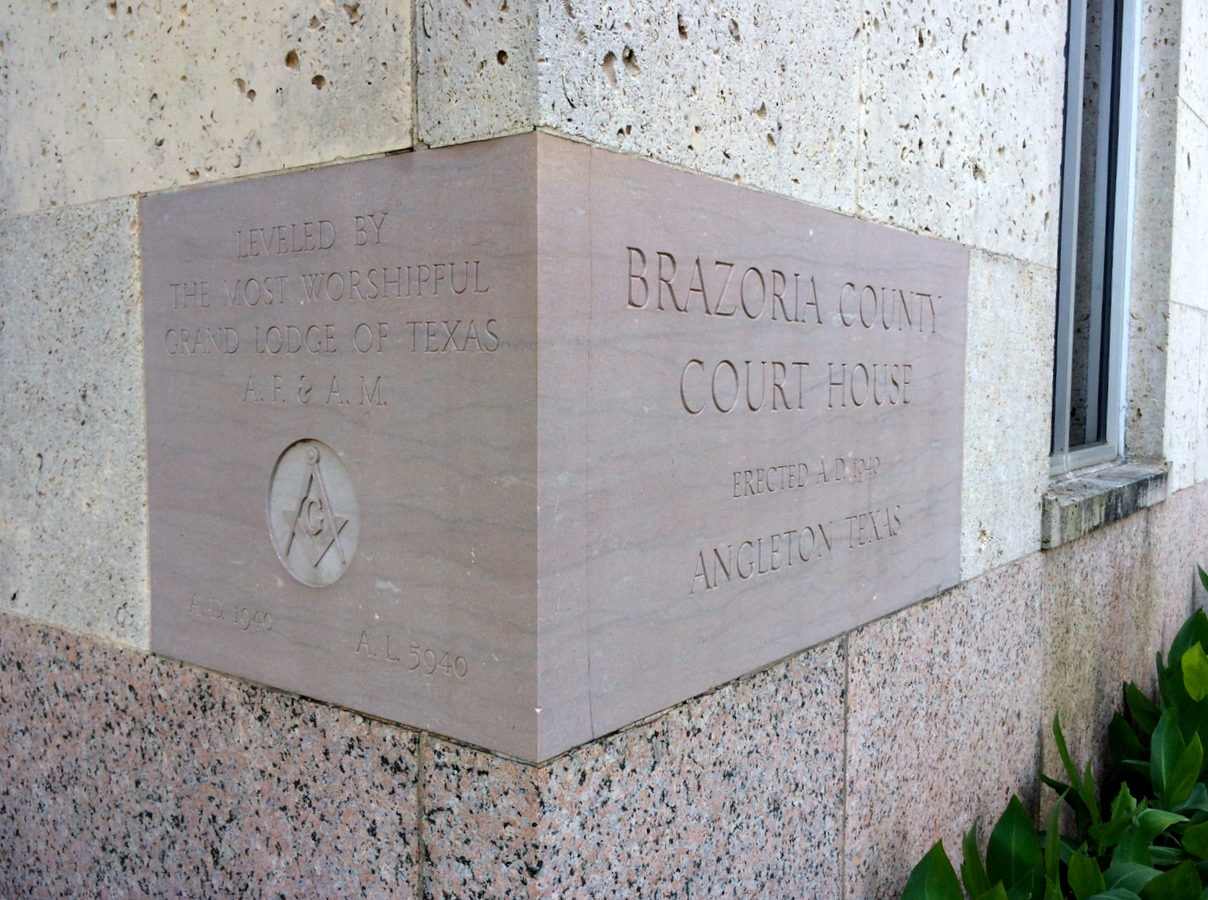 Features of the 1940 courthouse on the eastern side

The courthouses, as seen from the intersection of Locust and Front Streets

Brazoria County is a large industrial area for natural gas. This is one of many plants south of Angleton.

The Gulf of Mexico, as seen from Surfside Beach in southern Brazoria County

The Gulf of Mexico, as seen from the bridge spanning San Luis Pass (the opening to the bay between Brazoria County and Galveston Island)