“Chambers County, named for Thomas Jefferson Chambers, is a rural county less than twenty miles east of Houston in the Coastal Prairie region of Southeast Texas. The county is divided by the Trinity River. It comprises 616 square miles of level terrain that slopes toward Galveston Bay and the Gulf of Mexico, its southern and southwestern boundaries.”

“American settlement began in 1821 at the invitation of the Mexican government. Some of Laffite’s men stayed, and empresarios Haden Edwards, Joseph Vehlein, David G. Burnet, and Lorenzo de Zavala received grants in the area. The major part of what is now Chambers County became Vehlein’s grant. T. J. Chambers received land for serving as chief justice of the Supreme Court of Coahuila and Texas and, in 1829, as surveyor general. Chambers’s home, built in 1835, today houses the county library.”

“The Mexican government established Fort Anahuac in 1830 and gave command of the port at Anahuac to John Davis Bradburn, whose difficulties with the settlers culminated in the Turtle Bayou Resolutions and the eventual withdrawal of the Mexican garrison. Bradburn also arrested Francisco I. Madero, whose commission was to grant land titles to American immigrants. In a further foreshadowing of the Texas Revolution, discontented settlers rose against Mexican rule in 1835 in a conflict set off by disagreements over Mexican tariff policy.”

“Chambers County was formed in 1858 from Liberty and Jefferson counties, and organized the same year with Wallisville as its county seat. By 1860, census returns reported merino sheep, 26,632 cattle, and only 344 slaves countywide, a reflection of the importance of livestock in the local economy. Of sixty families that owned slaves in 1859, John White held thirty-three, and only twelve families among the remainder owned more than ten. Cotton growing increased in the antebellum period, but by 1860 only 100 cotton farmers operated in a county population of 1,508. Industry was confined to a steam sawmill and a shipyard.”

“The Whites and Jacksons maintained large ranches, and James Jackson introduced wire fencing on 26,000 acres in 1882. Price declines after the Civil War kept cotton farming to a minimum. Brickmaking on Cedar Bayou supported a Galveston building boom in the 1870s, while other manufacturers turned to boatbuilding, particularly at the Turtle Bayou Shipyard. The lumber industry centered at Wallisville helped that city to grow in the 1880s and 1890s, while Anahuac remained unoccupied.”

“Because railroad routes reached no farther than the county’s eastern and western borders by the 1890s, with the exception of a single branch line that provided freight service to the interior, Chambers County remained isolated and dependent on steamer traffic and other water transportation to Galveston. No important towns developed in the county until 1896, when settlers from the Midwest, who also developed the port at Bolivar, helped to complete the Gulf and Interstate Railway from Beaumont to Bolivar Peninsula.”

“A disastrous fire at the county’s wooden courthouse destroyed early records in 1875, hurricanes in 1875 and 1900 damaged crops and livestock, and a smallpox epidemic in 1877 killed many residents. Though some farmers left Chambers County after the 1875 hurricane, total farms increased from 146 to 327 between 1870 and 1900. In the latter year the total acres in farms reached 366,436; farm value had increased tenfold in the previous ten years. General prosperity resulted in a near doubling of the population between 1880 and 1910 from 2,187 to 4,234.”

“In 1906 Wallisville adopted a stock law to prevent pigs from running loose. Anahuac had become a boomtown. In 1908 Anahuac supporters filed suit and, in spite of Wallisville’s genteel swine law, succeeded in making their town the county seat. Efforts to dissolve the county itself were made in 1915, 1923, and 1925 as conflicts developed over stock laws, prohibition, and the county seat question; these were complicated by offers of lower taxes from Harris and Liberty counties, whose officials hoped to cash in on Chambers County oilfields.”

“After [World War II,] the population grew to 7,871 by 1950 and 10,379 by 1960. By 1959 county farms totaled 483, of which roughly 62 percent were commercial and only 12.4 percent tenant-operated. Mining, contract construction, wholesale distribution, petroleum extraction, and natural-gas production were the chief county industries. Only four manufacturing firms were operating, among 112 mining and mineral establishments. By 1966, though the overall population continued to increase, no populated place in Chambers County had as many as 2,500 inhabitants.”

“Between 1970 and 1980 the rural population of Chambers County grew 52 percent, and in the early 1980s the total county population was 19,100. People of English origin comprised 27 percent, Irish 17 percent, French 6½ percent, African-American 14 percent, and Hispanic 3 percent.”

“In 2000 the census counted 26,031 people living in Chambers County. About 78 percent were Anglo, 10 percent were African American, and 11 percent were Hispanic; other ethnic groups comprised about 1 percent of the population. Almost 77 percent of residents age twenty-five and older had four years of high school, and more than 12 percent had college degrees. In the early twenty-first century petroleum and chemical production, agribusiness, fish and oyster processing, and tourism were key elements of the area’s economy.”

“Incorporated communities in Chambers County include Anahuac (population, 2.288), the seat of government; Beach City (2,365); Cove (505); Mont Belvieu (4,418); Stowell (1,839); Old River-Winfree (1,248); and Wallisville (300). Several important wildlife areas are located in Chambers County, including Moody National Wildlife Refuge and Anahuac National Wildlife Refuge, at the juncture of Oyster Bay and East Bay. Lake Anahuac and Fort Anahuac Park were built in the 1940s, H. H. (Hub) McCollum Park in 1959, and Whites Park in 1965. The Texas Rice Festival, which began in 1969, is celebrated annually at Winnie-Stowell in September.” 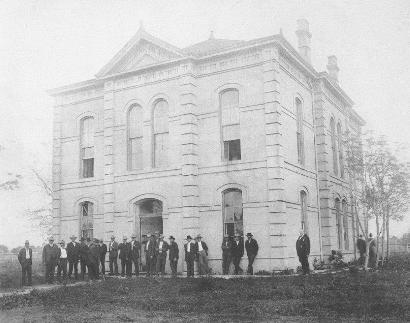 I’m unaware if the contractor of this building also served as the architect, or if the architect is simply known at all. However, we can be sure that a man named August Baumbach was involved with this building in some capacity. He constructed this building with Renaissance Revival characteristics from brick and stone.

An adjacent jail was constructed in 1894 with a tower for gallows, but no hangings ever commenced in Chambers County. A local dispute over roaming livestock, known to history as the “County Seat Hog War”, moved the seat to Anahuac, and the 1886 courthouse become defunct. 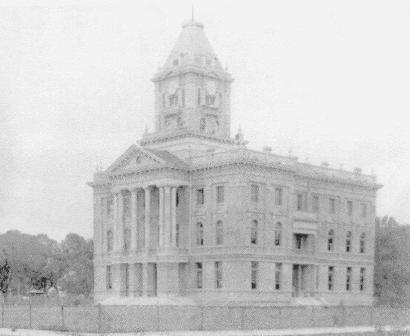 This building was designed by F.W. Steinmar and became the first courthouse in Anahuac. It was used until April 28, 1935 (on which date it burned). 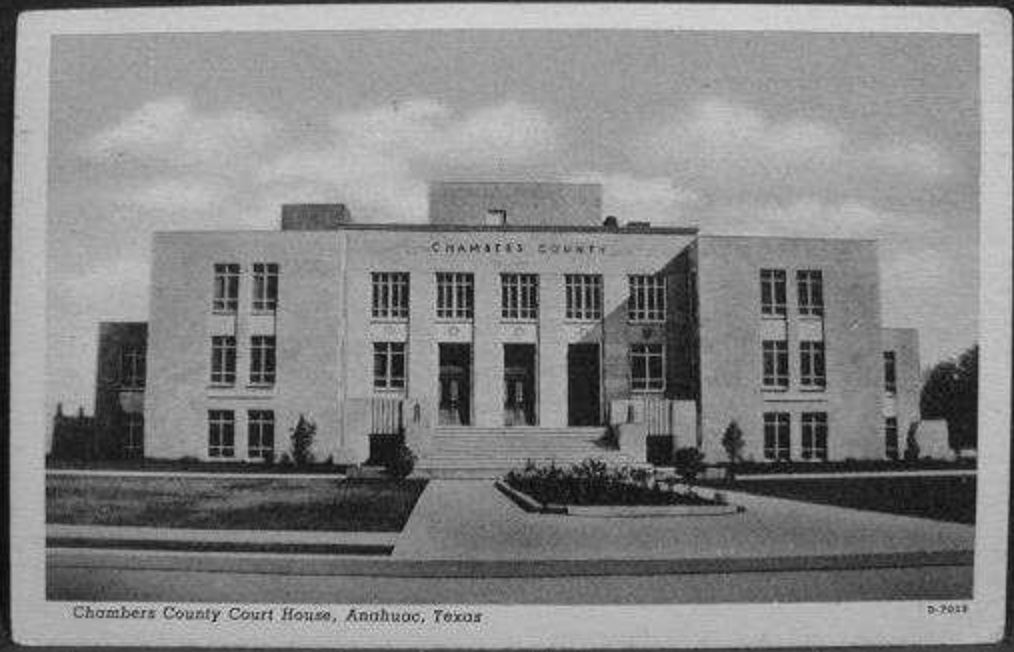 Built of shell-limestone, this Corneil G. Curtis-designed courthouse was constructed during the Great Depression with partial funding from the Works Progress Administration. The building cost the county $276,000.

From 1936 to 1983, a portion of the third floor functioned as the Chambers County Jail. 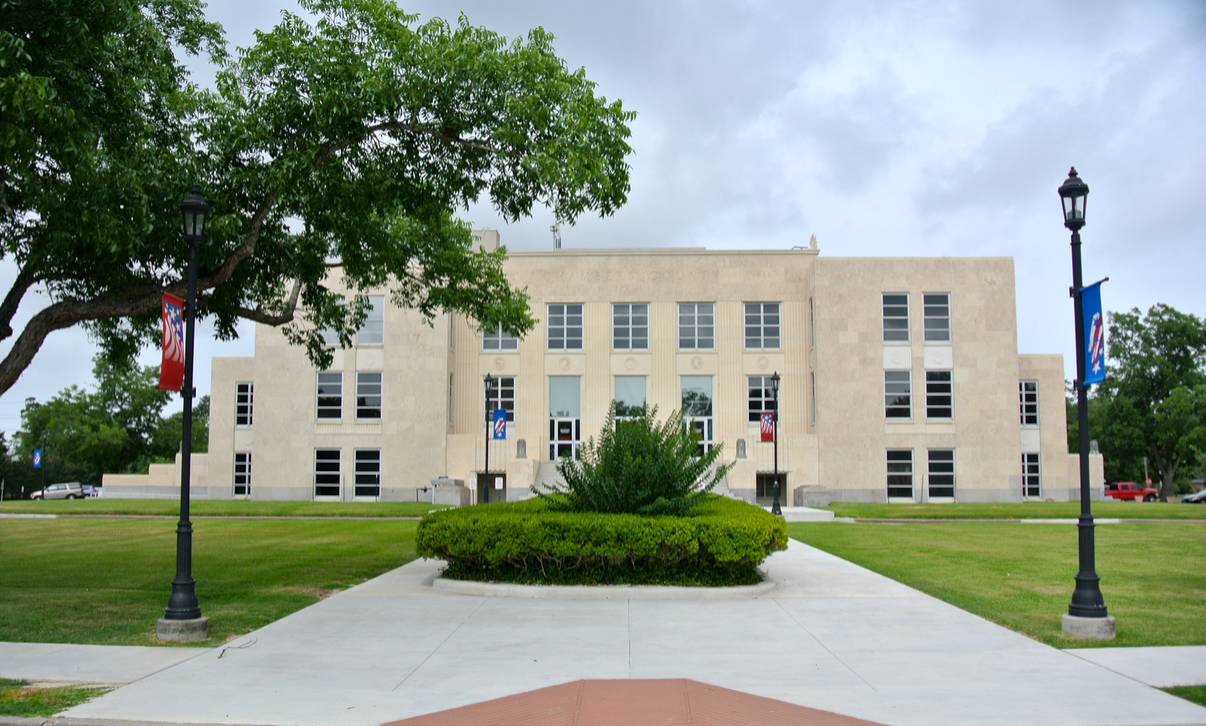 The main façade of the Chambers County Courthouse faces west towards Washington Avenue. 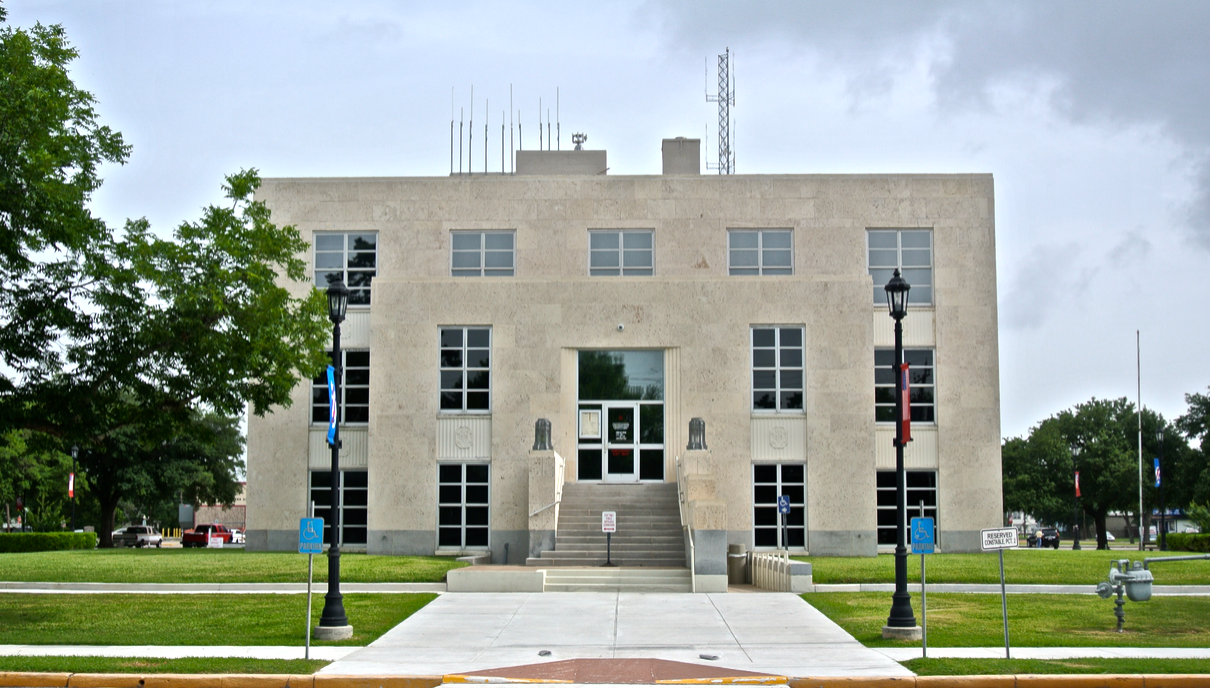 The southern façade, on Stowell Street 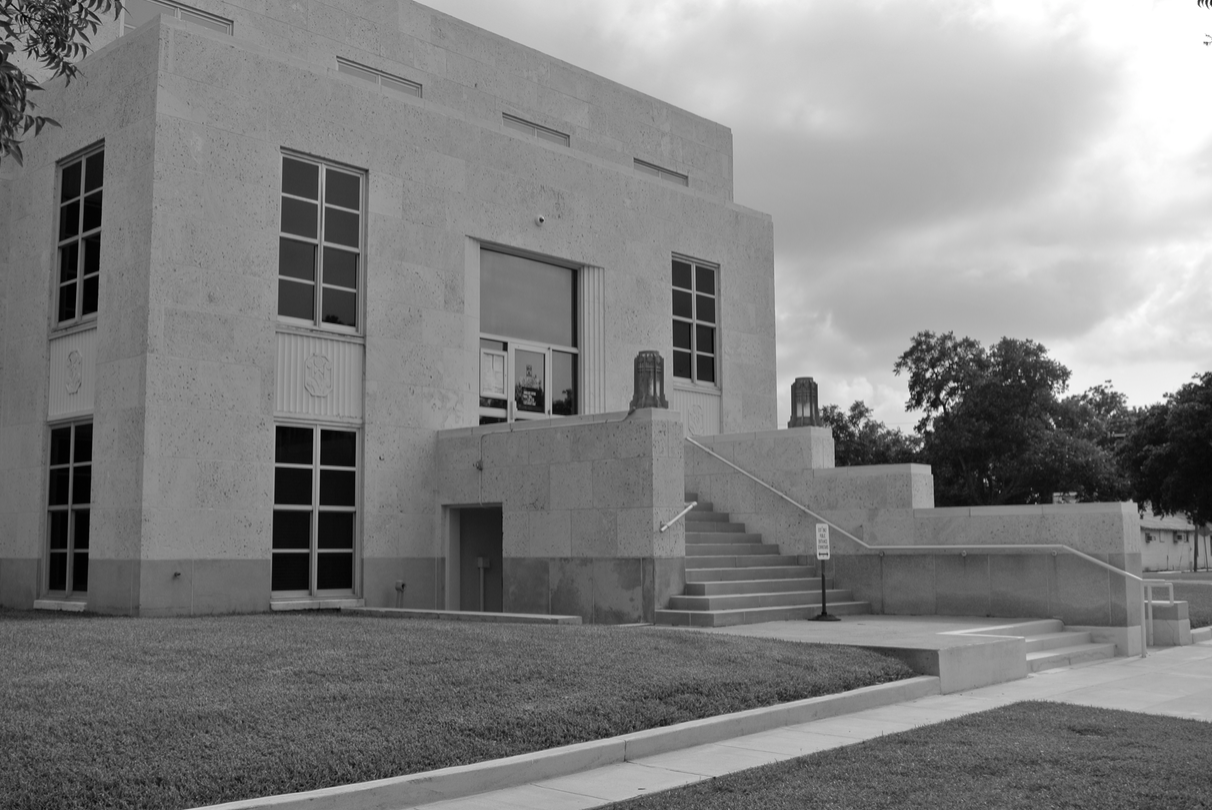 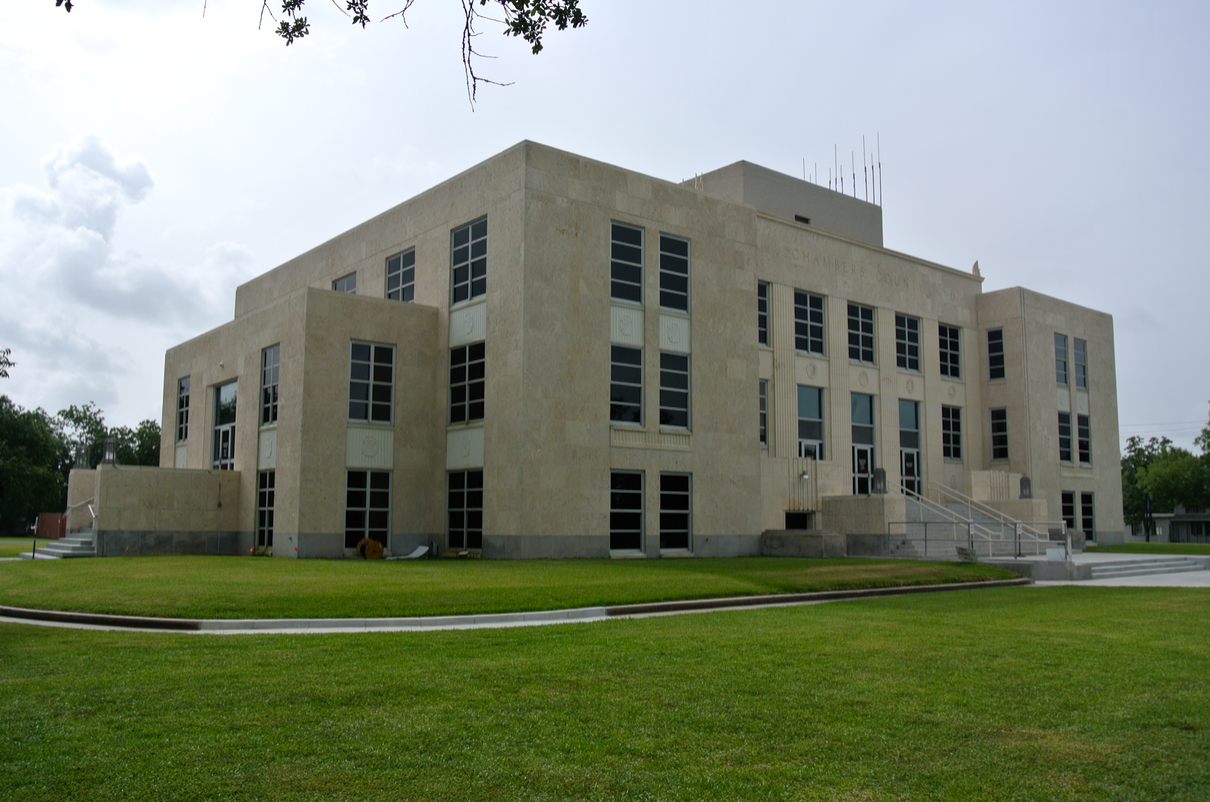 The southwest corner, as seen from the intersection of Stowell Street and Bolivar Avenue

The southern façade, facing west towards Bolivar Avenue and the Anahuac Channel 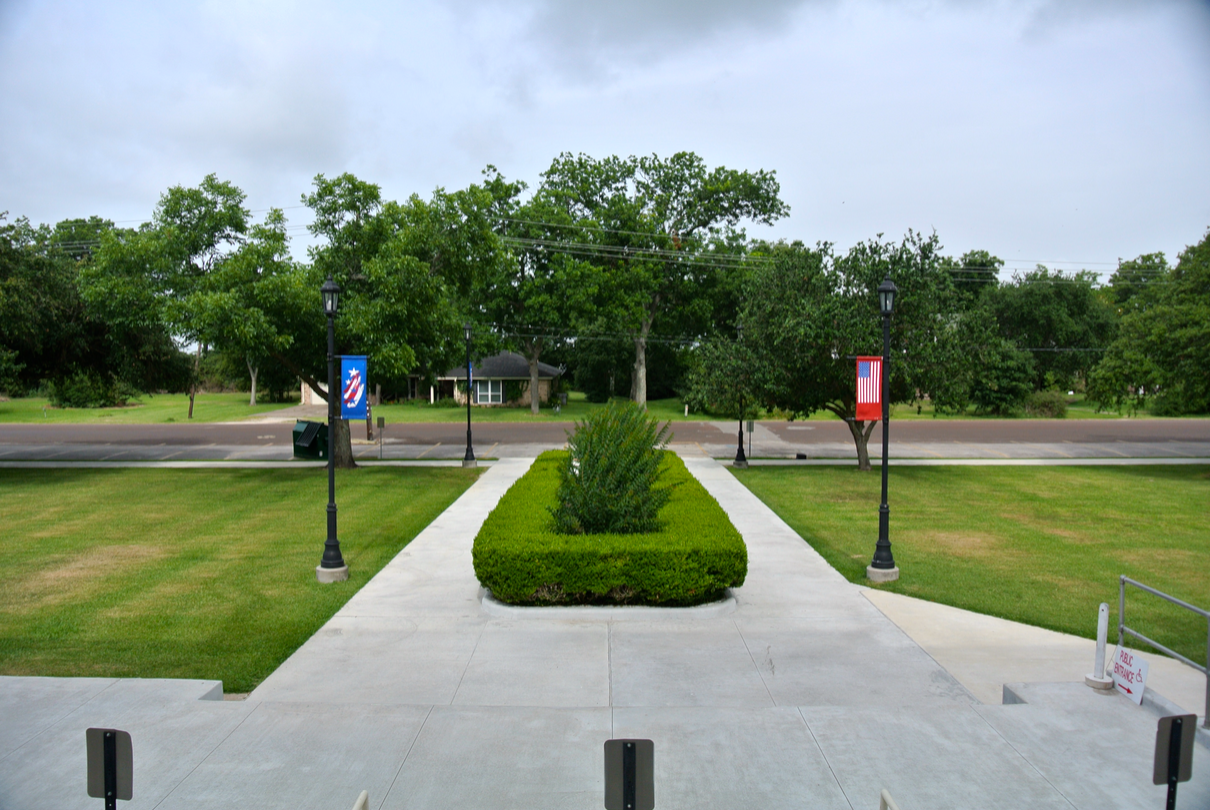 The view from the western doors looks upon Bolivar Avenue and the thin tree line separating the courthouse from the Anahuac Channel.

Five different engravings line both the western and eastern façades. They each tell a story about the economy of Chambers County. 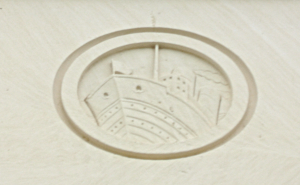 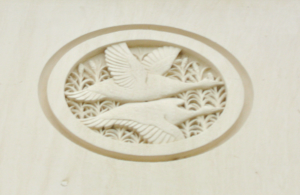 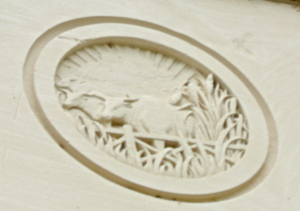 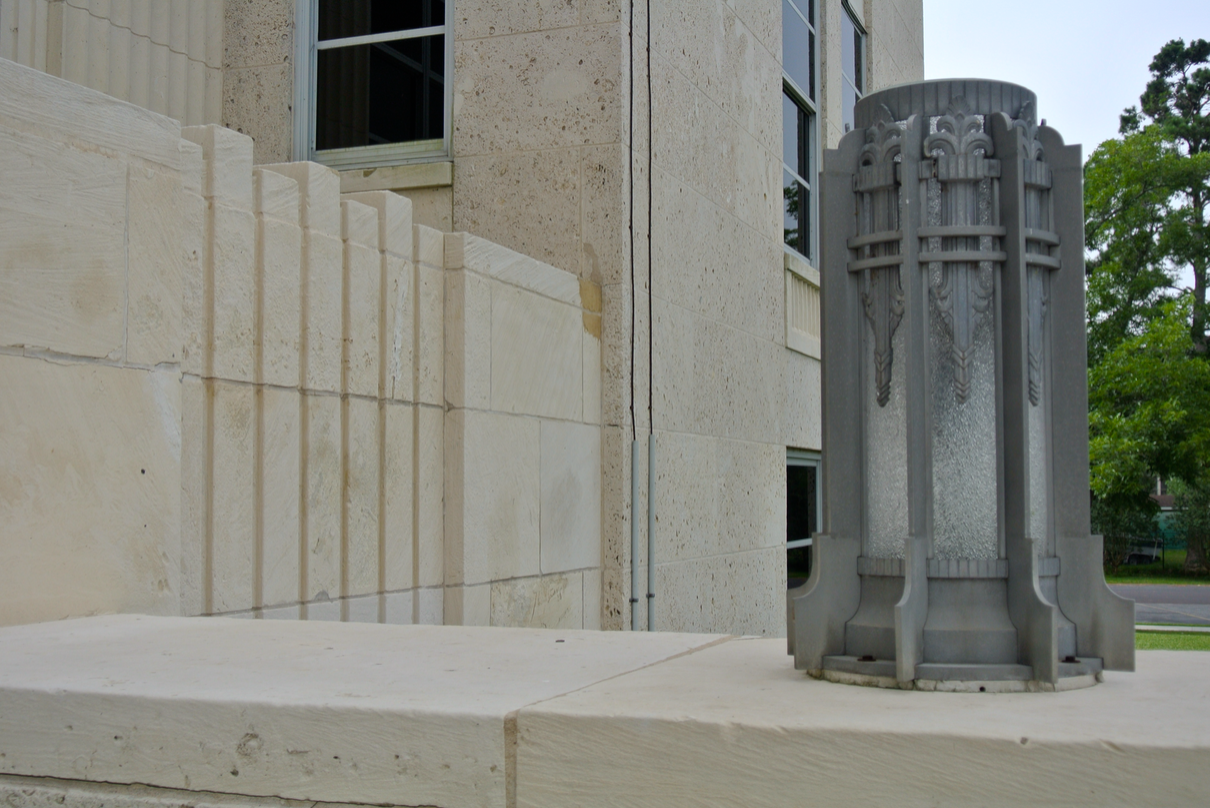 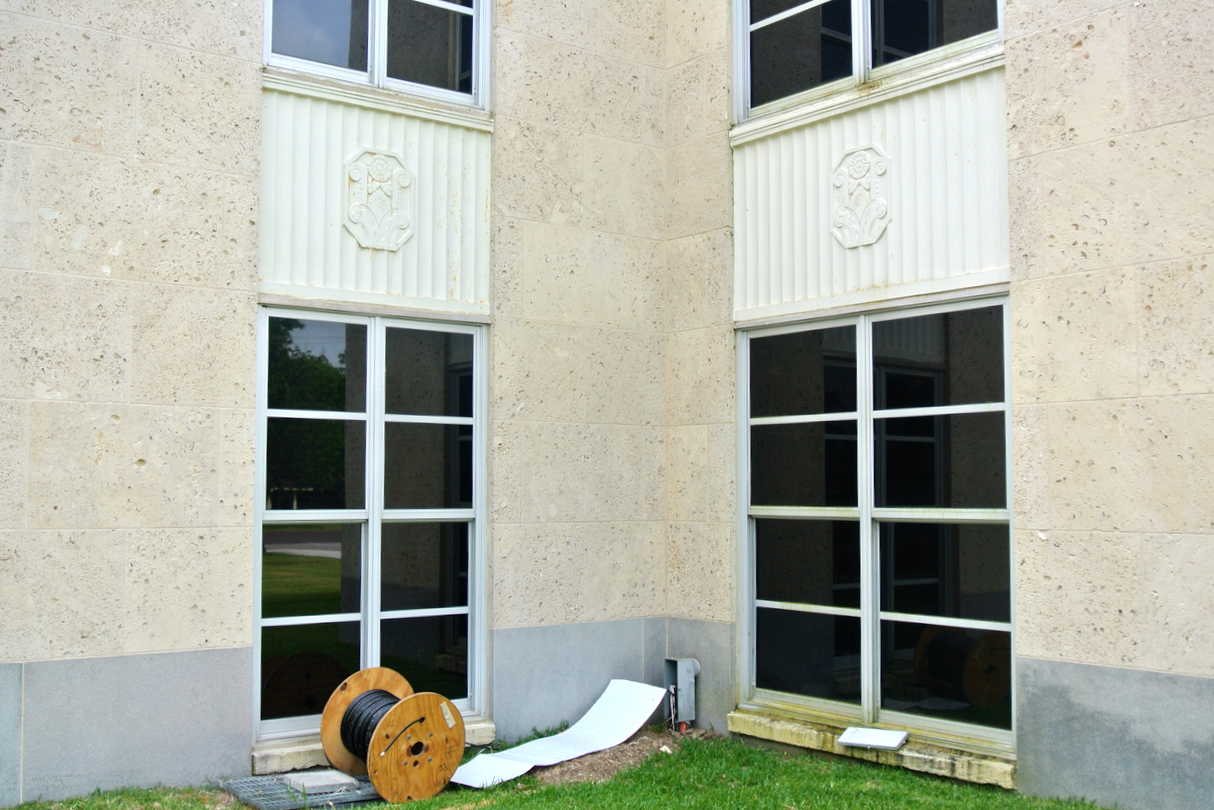 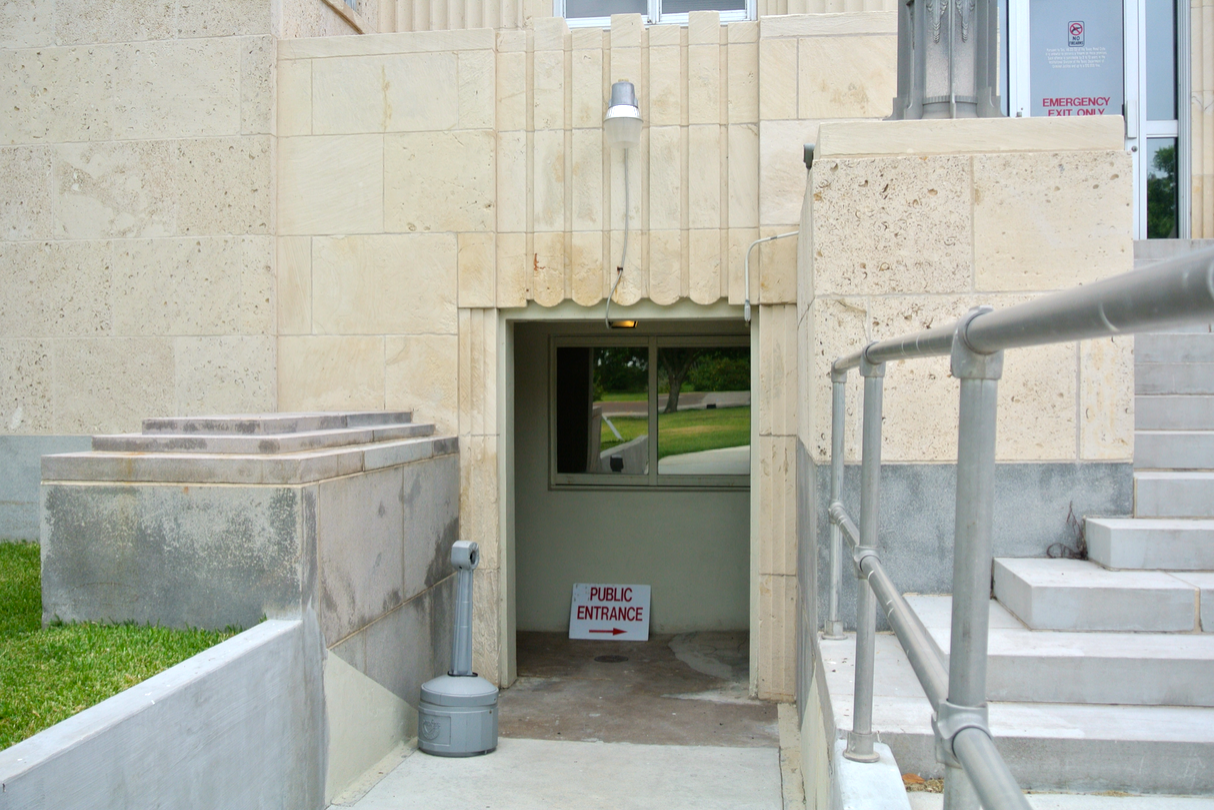 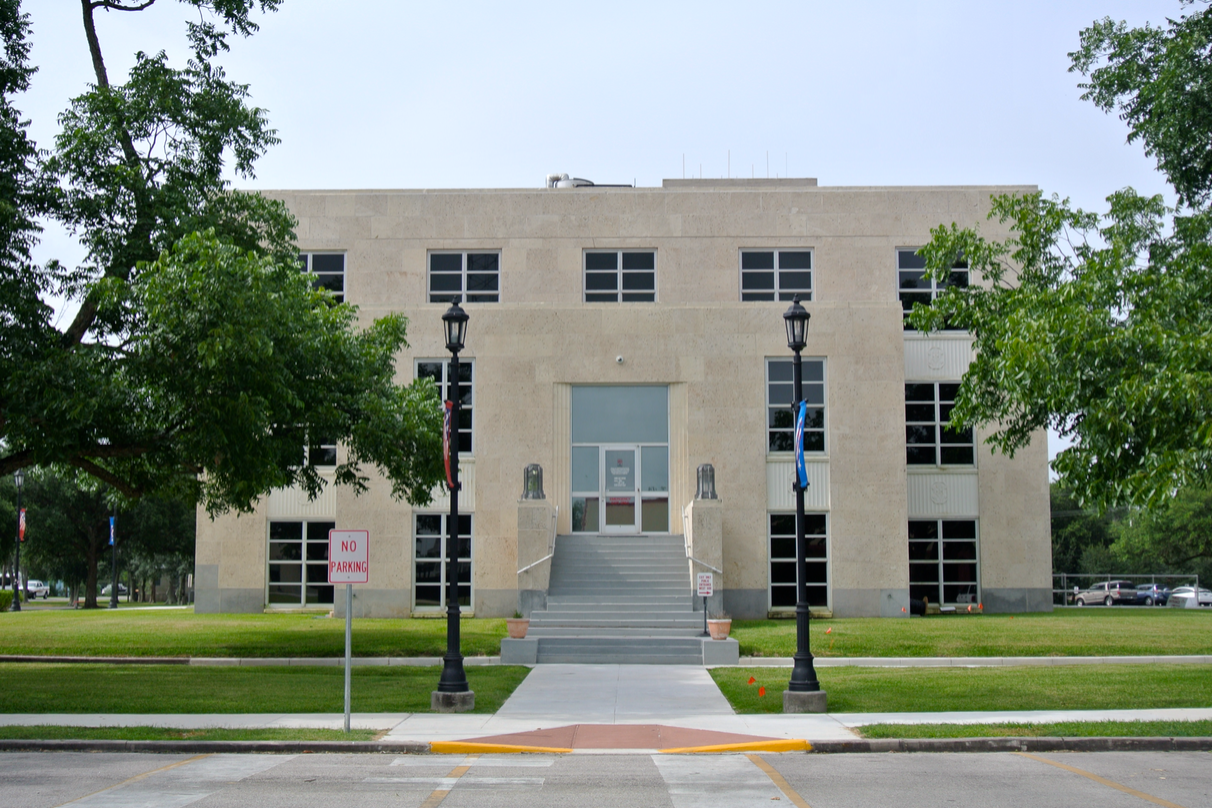 The northern façade on Court Street

The shell-limestone is a reflection of the region this courthouse is located in. 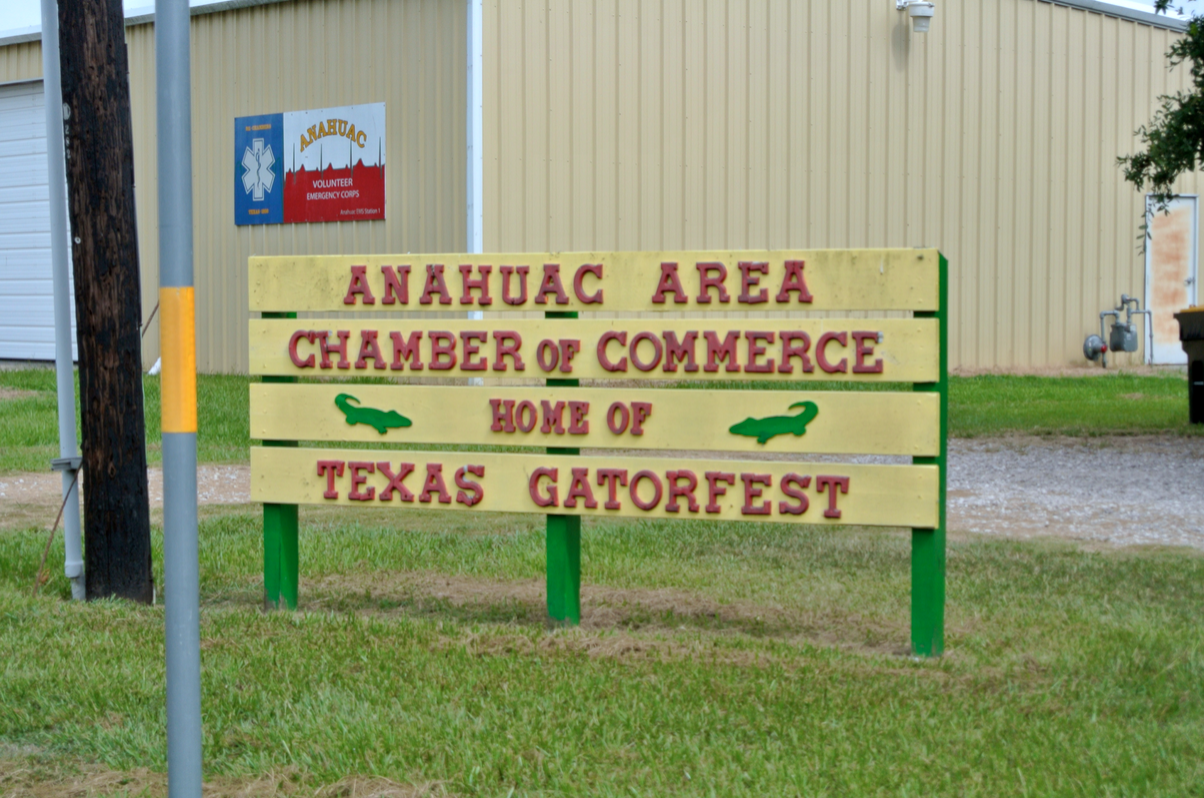 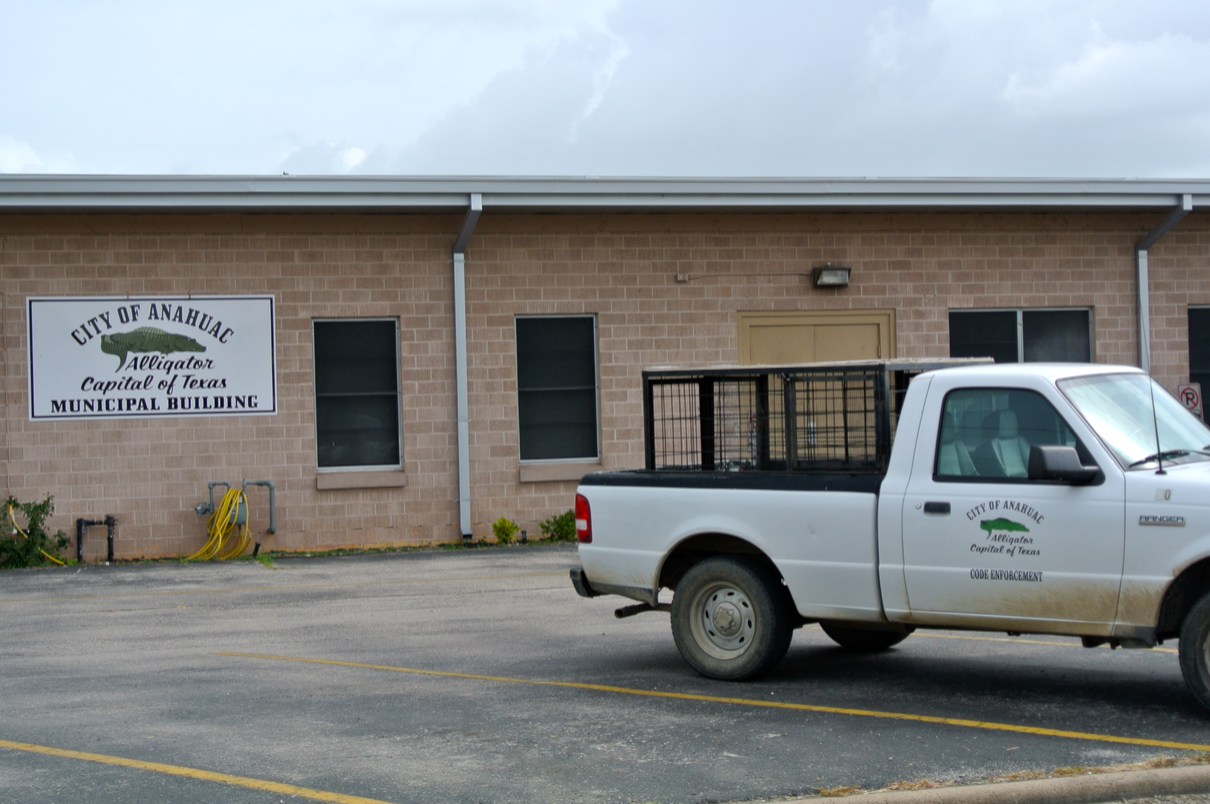 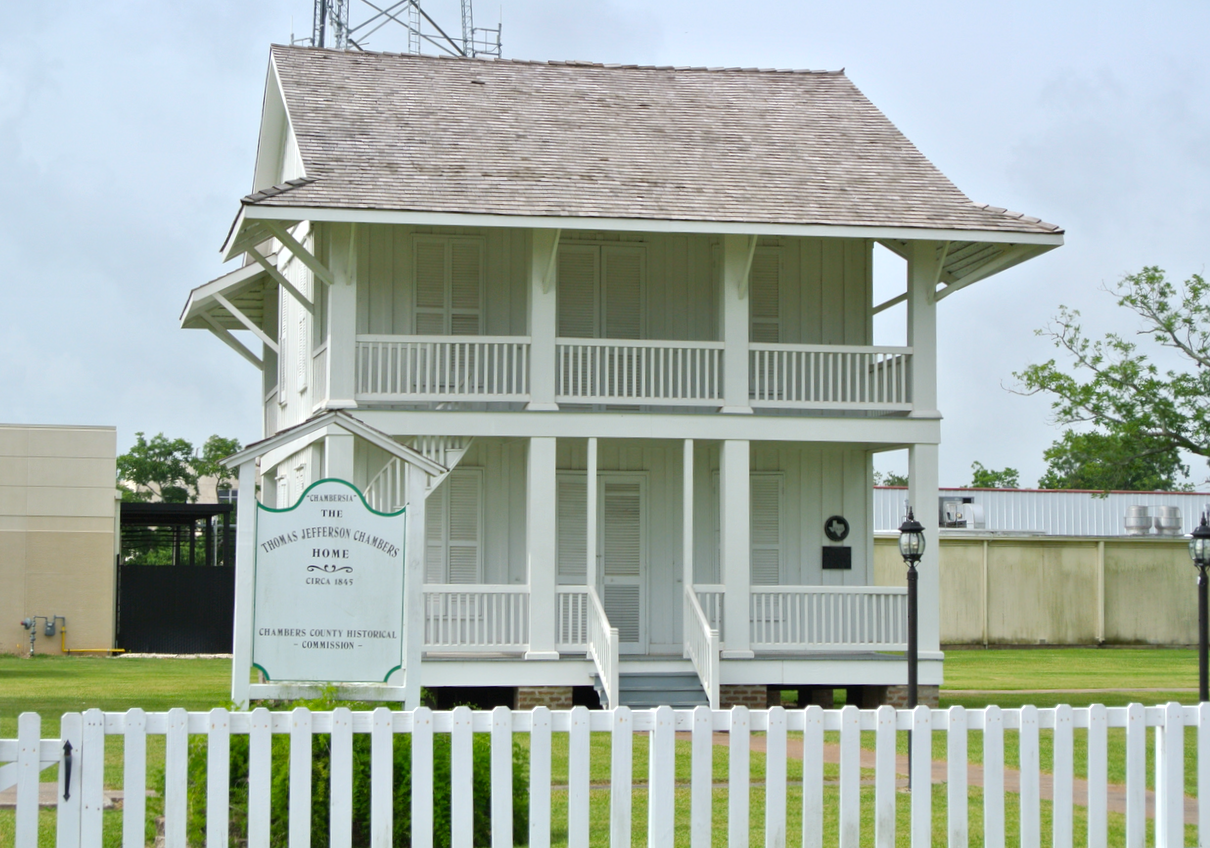 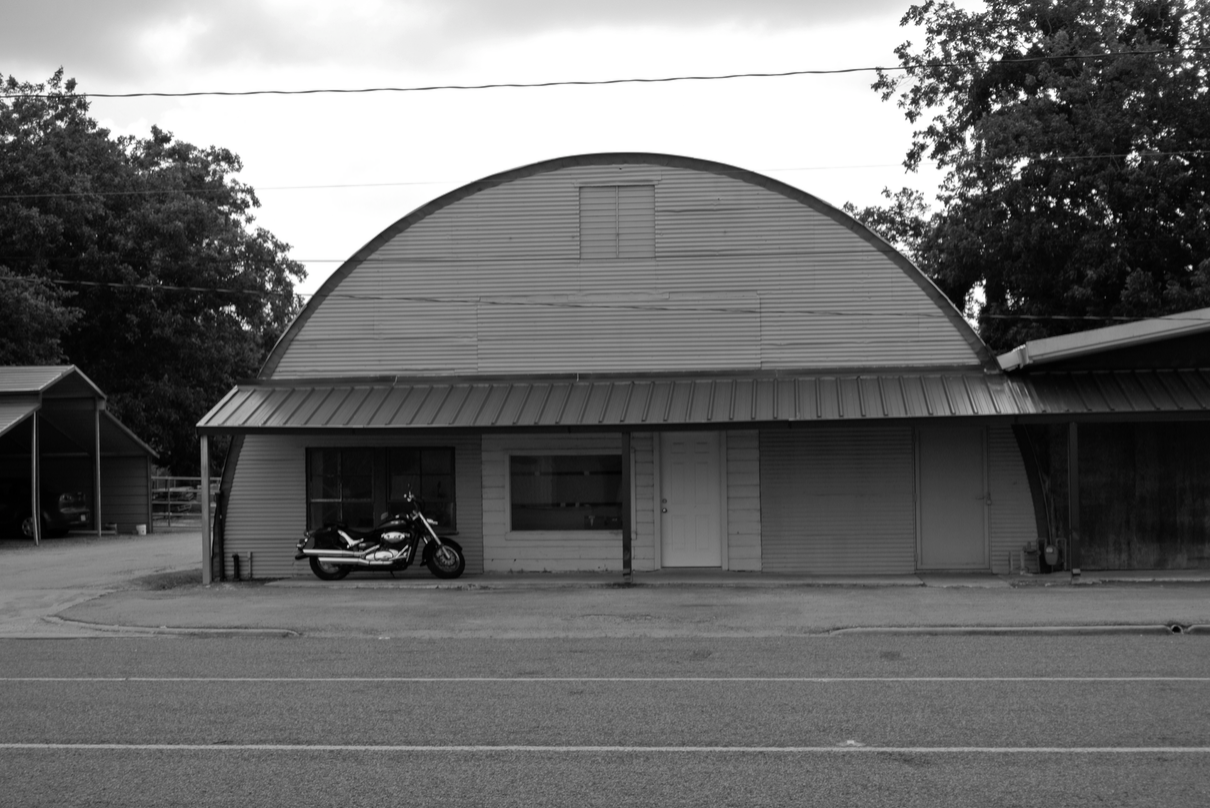 Across the street from the courthouse