“The town of Refugio, the county’s seat of government and largest urban center, is thirty-five miles north of Corpus Christi. The county was named for Nuestra Señora del Refugio Mission. Refugio County covers 771 square miles of generally flat land covered with tall prairie grasses and spotted in some areas with mesquite, live oak, prickly pear, and huisache. Elevations range from sea level at the shore to 100 feet in the northwest section.”

“The region was originally inhabited by the Karankawa Indians, a nomadic tribe. The site of the modern town of Refugio was a favorite camping ground of the tribe, and in time a permanent village developed there. Comanche and Lipan Apache Indians occasionally raided the area in the nineteenth century. The first Europeans in the area were probably Álvar Núñez Cabeza de Vaca and his companions; the coastline was charted by Alonso Álvarez de Pineda in 1520. In 1722 Spaniards established Nuestra Señora del Espíritu Santo de Zúñiga Mission (often called La Bahía Mission) at the site of present Goliad to minister to the Karankawa Indians and to cement the Spanish claim to the Texas coast; the mission came to be surrounded by ranchos that supported a growing Spanish population.”

“La Bahía was in territory that became part of the original Refugio County but is not within the present county limits. In 1793 Nuestra Señora del Refugio Mission was founded at the juncture of the San Antonio and Guadalupe rivers. After a destructive Indian raid in 1794, however, the mission was moved to another site; and in 1795 the mission was moved to a location on the Mission River, at the site of the present town of Refugio. Though the mission attracted few Indians, it was the last Spanish mission to be secularized after the Mexican War of Independence.”

“The villa of Refugio, officially established in 1831 around the old Refugio mission, became the center of the Refugio Municipality in 1834. Martin Power was elected the first alcalde. From its inception the Refugio Municipality was troubled by political disputes that were reflected in a controversy over what the area should be called. The name was briefly changed to Wexford (after the Irish county from which many of the new settlers had come), but that name was not accepted by many of the area’s residents and was finally dropped. The dispute over the legal status of the Refugio Municipality was still unsettled when the Texas Revolution began in October 1835.”

“In January 1836 troops began to concentrate at Refugio in preparation for the proposed Matamoros expedition, but Gen. Sam Houston dissuaded most of the volunteers from following through with the ill-fated scheme (see MATAMOROS EXPEDITION OF 1835–36). Soon after he left Refugians elected Houston and James Power as delegates to the Convention of 1836. The area soldiers elected Edward Conrad and David Thomas to the convention, and all the delegates were seated.” 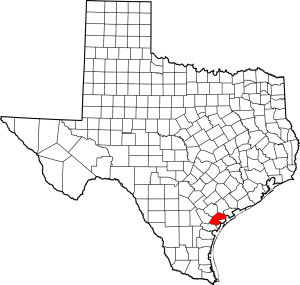 “On March 14, 1836, at the battle of Refugio, a greatly outnumbered Texian force under Amon B. King and William Ward held off a division of the Mexican army led by Gen. José de Urrea. Although most of Ward’s men escaped, all of King’s contingent were either killed or captured. King, and the remnants of his force, were summarily executed in the Goliad Massacre on March 16. After the revolution the greatly depleted population of Refugio stood off petty raids from Mexico until the end of 1842, while bitterness and anti-Mexican feelings occasioned by the war lingered on in the minds of the Anglo-American settlers, causing conflicts with Mexicans in the area, whether or not they had supported the centralist cause.”

“After independence Refugio was organized as one of the thirteen original counties of the Republic of Texas, with the town of Refugio as the county seat. Far larger than the current county, the original Refugio County included territory that was later incorporated into new neighboring counties. By the time of the Civil War the original Refugio County area had been reduced by Goliad County in 1841; Calhoun, San Patricio, and Victoria counties in 1846; and awards to Bee County in 1857 and to Nueces County in 1858.”

“During the Civil War saltworks of long standing were operated near Lamar, and others were opened along the coast. In 1862 the saltworks were raided and thereafter were periodically reraided. In retaliation for successful blockade-running into St. Mary’s, the federal navy destroyed that port’s wharf and warehouse and in 1862 burned Lamar. A number of Refugio County men served in Confederate gray, serving in all four companies of Col. Alfred M. Hobby‘s regiment, organized in May 1862. The unit successfully withstood the Union bombardment of Corpus Christi in August of that year.”

“By 1868 the town of Refugio had been reduced to a few private homes, a dilapidated concrete courthouse, a hotel, the McCambell Brothers store, and a wooden Masonic building. The old stone mission had been demolished, leaving only piles of rocks and debris. Meetings of the town council had been suspended in 1861, at the beginning of the Civil War, and were not begun again until 1874.”

“Refugio County lost much of its coastland during the 1870s when the county was divided after a political dispute between coastal and inland residents. Refugio had served as the county seat since 1836, but the Constitution of 1869officially designated St. Mary’s the county seat. The records, however, stayed in Refugio. Partly because most of the county’s population increase since the Civil War had been along the coast, on March 15, 1871, the legislature changed the county seat to Rockport.”

“The records were temporarily moved, but the older settlers in the region objected so strongly that on April 18, 1871, the legislature established Aransas County with its county seat at Rockport and fixed the seat of government for Refugio County at “the mission.” Partly because of the Mexican-American exodus and the consolidation of ranchlands and partly because of the physical division of the county, the number of farms in the county fell from 176 in 1870 to 123 in 1880; the population also declined significantly during that period, dropping to 1,733 by 1880.”

“The new century brought rapid and dramatic changes to Refugio County. In 1905 the St. Louis, Brownsville and Mexico Railway was built through the county, opening the area to development. Beginning in 1906 promoters subdivided the Bonnie View, Hynes, Gullett, and Rosborough ranches into farmlands, and the communities of Tivoli, Bonnie View, Austwell, Woodsboro, and Bayside were soon begun. The number of farms in the county jumped to 236 by 1910 and to 310 by 1920; by 1930 there were 507 farms in the area. Many of the new farmers planted cotton.”

“Cotton production in the area dropped significantly during the Great Depression of the 1930s, and by 1940 only 18,000 acres were devoted to the crop. The county lost more than 20 percent of its farms during that period; by 1940 only 396 remained. The effects of the depression were offset to some extent, however, by continuing development of petroleum and gas resources, and the population rose during the 1930s; by 1940, 10,383 people lived in the area.”

“In 1990 the town of Refugio, with 3,158 inhabitants, was still the county’s largest population center and seat of government. Other communities included Woodsboro (1,731), Austwell (189), Tivoli (540), Bayside (400), Vidauri (85), and Bonnie View (25). In July the town of Refugio celebrates an “Old-Fashioned Fourth” and hosts the State Frog-Jumping Contest. The County Fair is held there every October.”

Refugio County’s had its fair share of courthouses through history. Some of its more interesting stories include the use of the crumbling Refugio Mission at different times from 1837 to 1848, and how county employees are said to have torched the 1880 building when commissioners refused to build a new and more spacious one. Unfortunately, no pictures of these structures remain.

As for the 1917/’19 courthouse (reports on the year of completion differ), this blurry TxDOT image is all we have. It was designed by the popular South Texas architect Atlee B. Ayres, who would have drafted its plans shortly after leaving the position of State Architect. Local contractor W.H. Borglud provided its construction. The Mission-Style influences are pronounced (a common denominator in most all of South Texas’ courthouses, especially those designed by Ayres).

To me, this one looks like a “mash-up” of his creations in Jim Wells and Kleberg Counties, minus a dome. 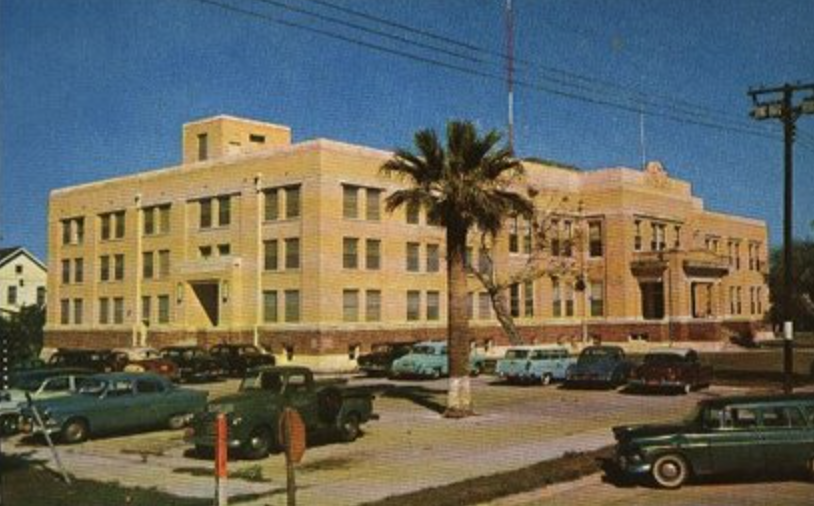 The above picture is of the same courthouse, but it’s a bit hard to tell that. Certainly, many years had passed since Ayres designed his original building, and the popular architectural style of the period had changed drastically. It was in 1950 that the courthouse was renovated, modernized, and additions were tacked on. Today, it’s off the main road and tucked behind trees to hide its state of disrepair. A ghost of what once was… 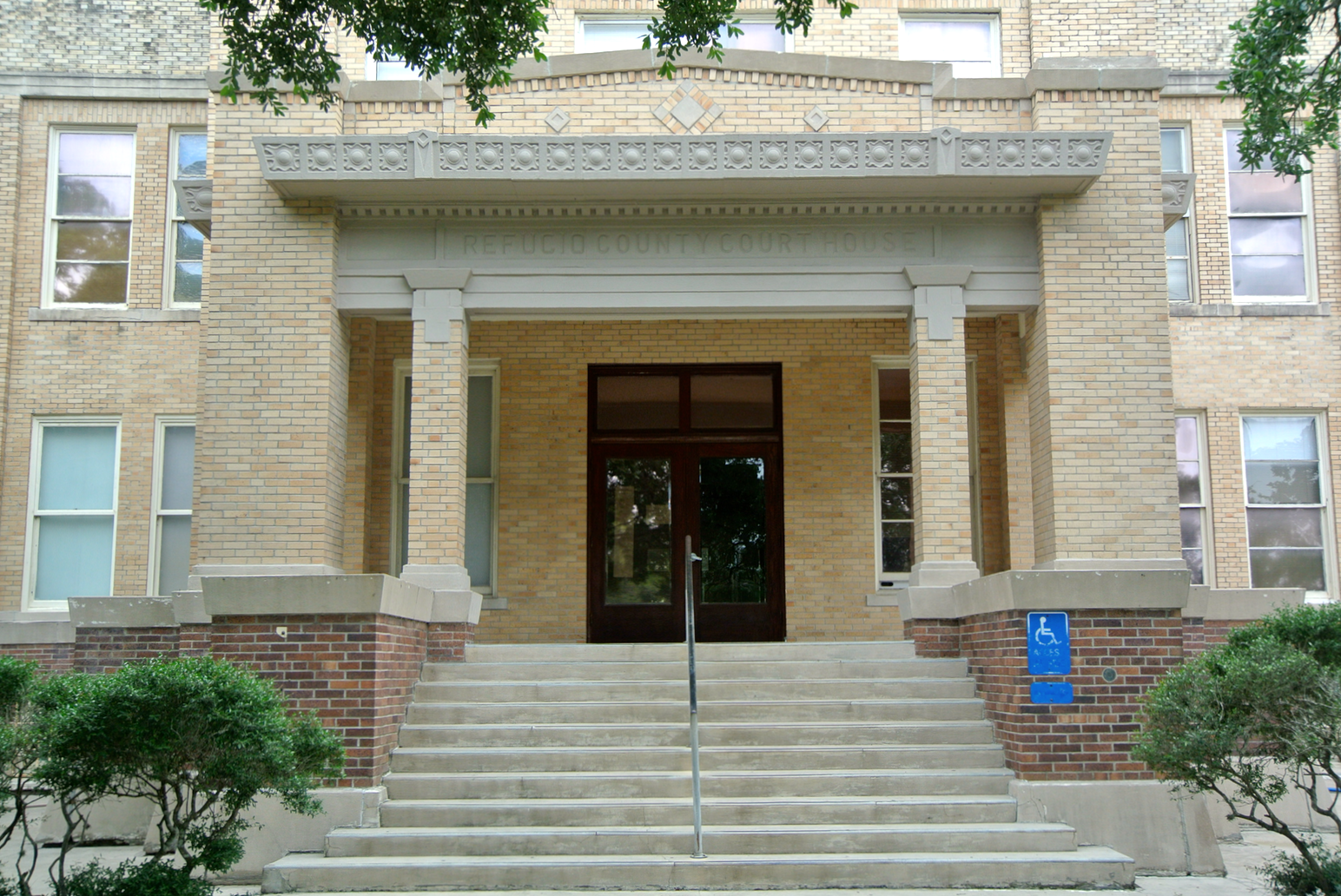 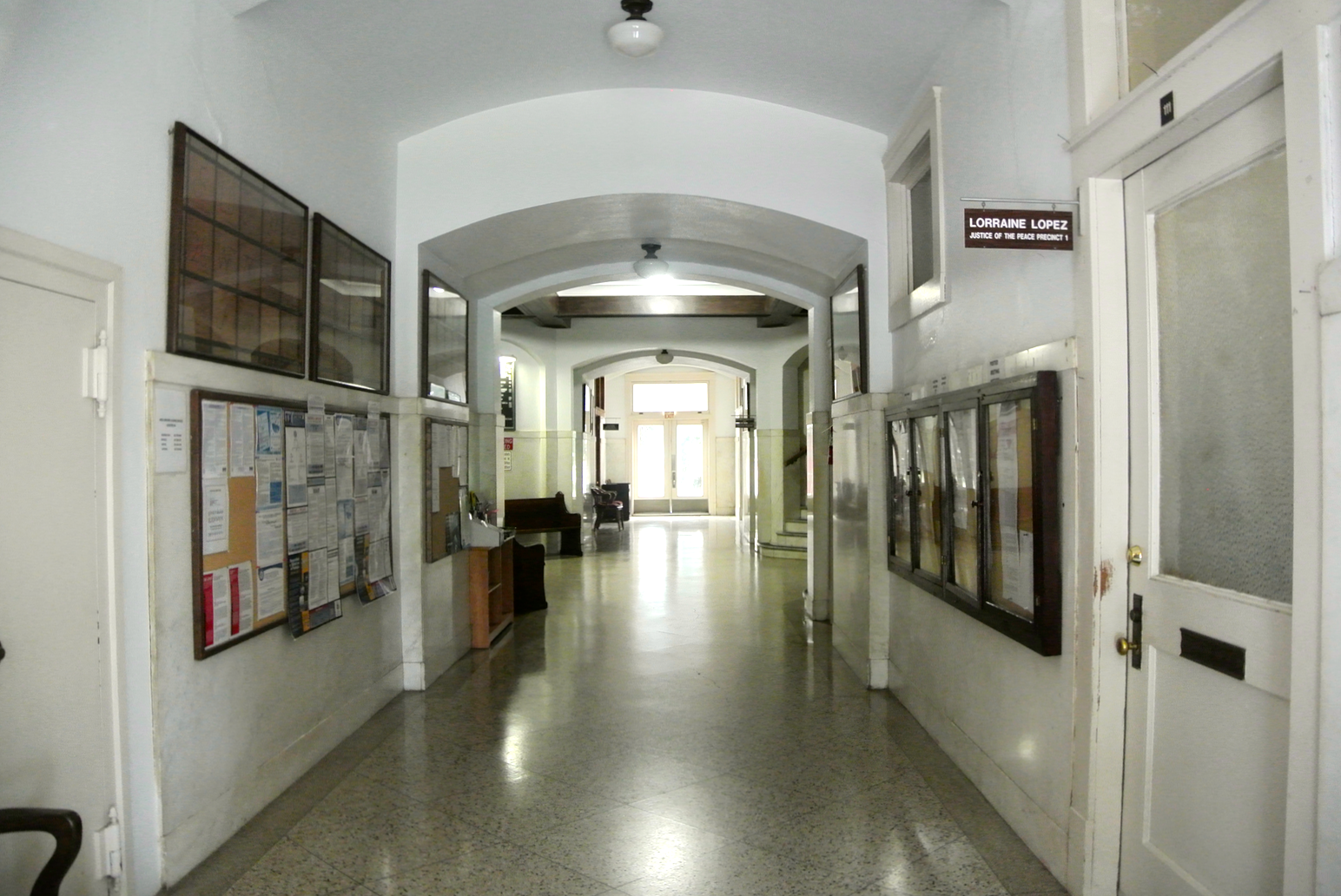 The interior, viewed through the front doors 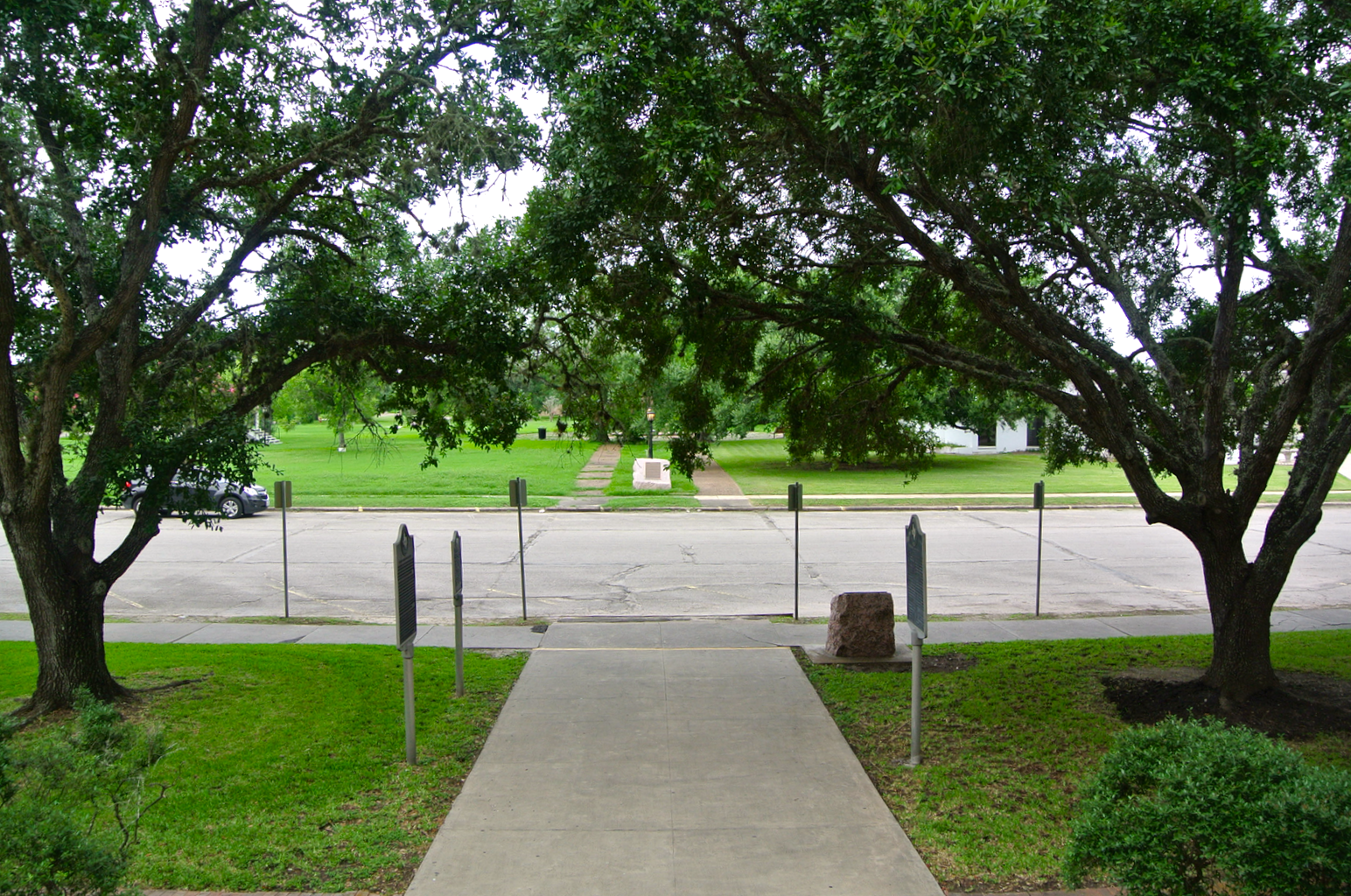 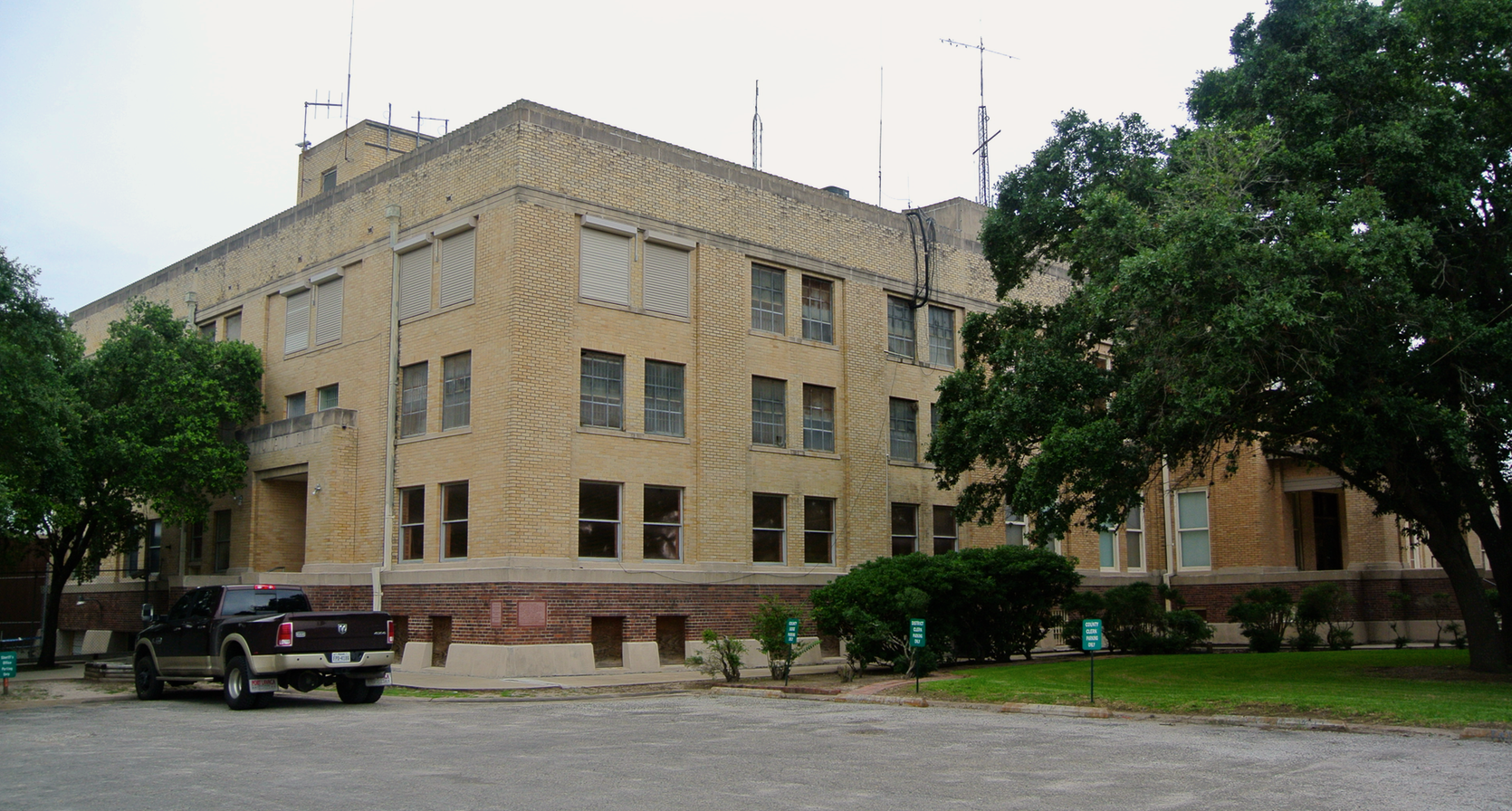 The southeast corner, at the intersection of Commerce and Empresario Streets

The cornerstone only pertains to the 1950 addition, not the original courthouse. 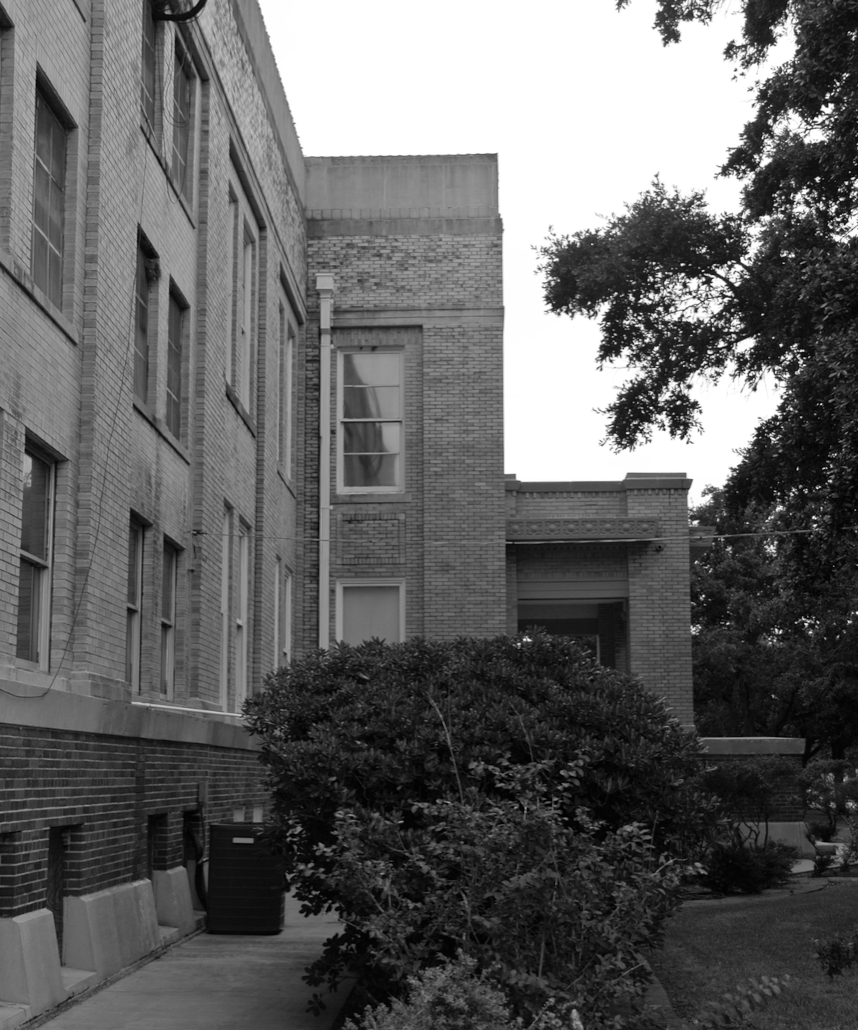 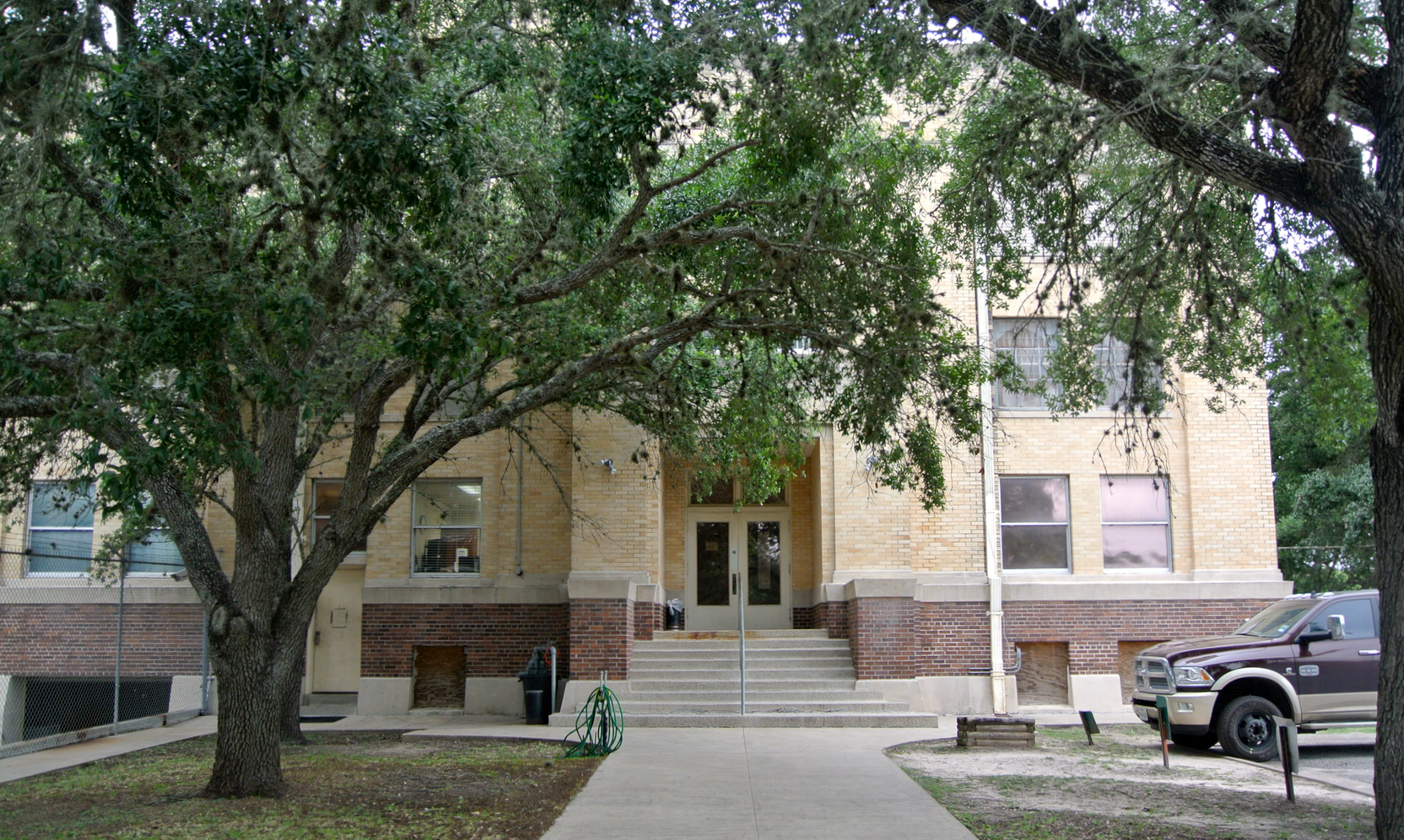 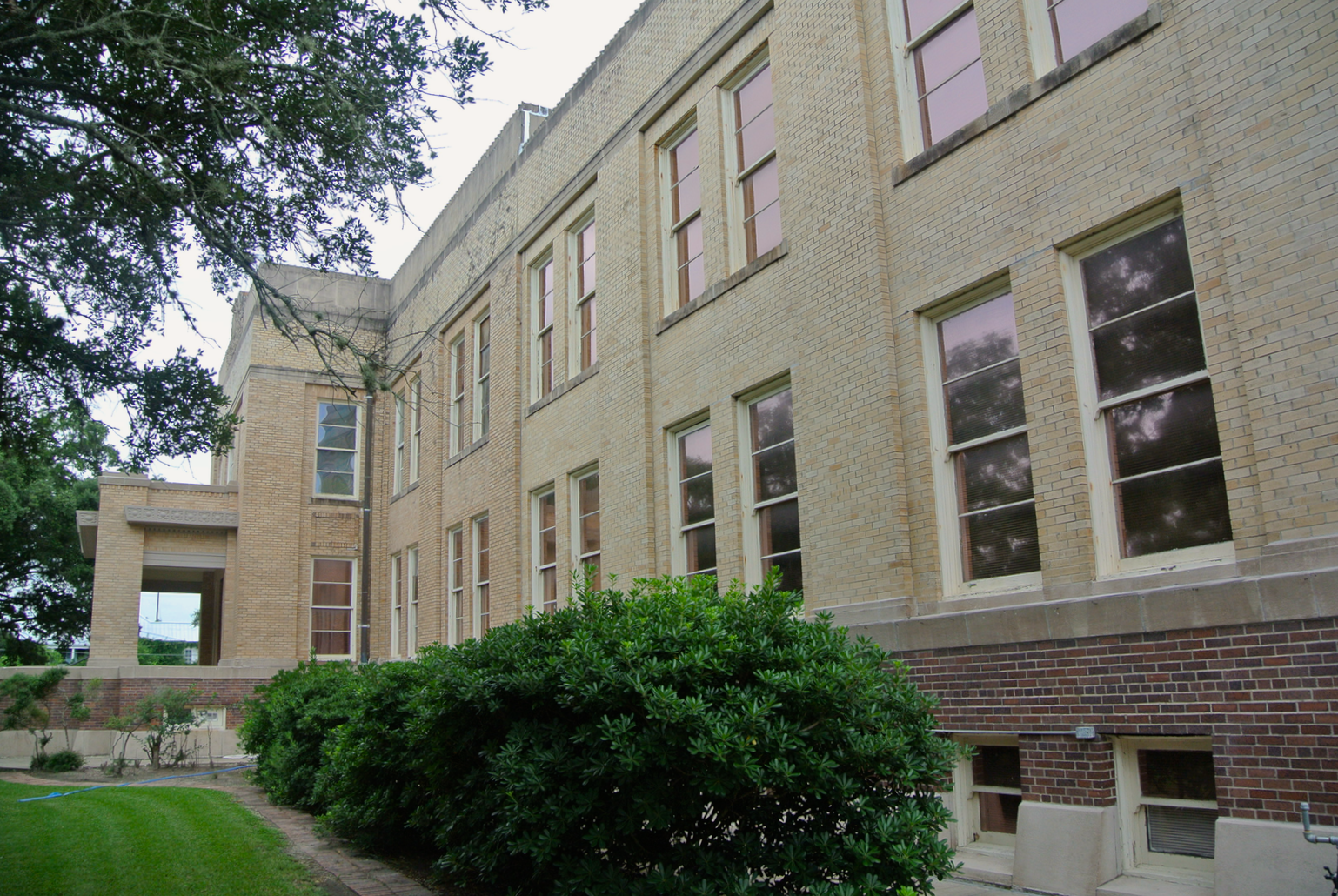 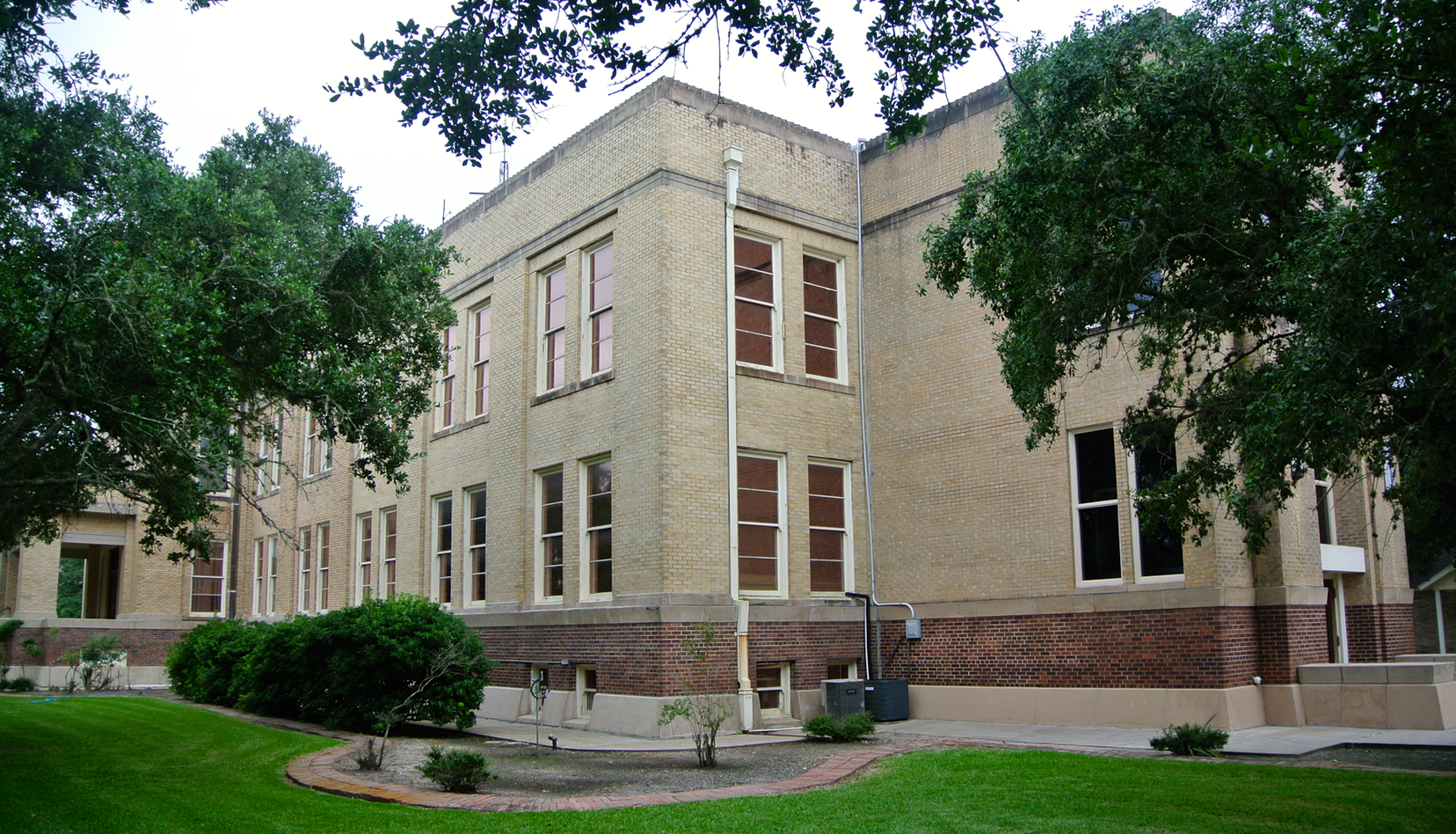 Views from the northeast corner 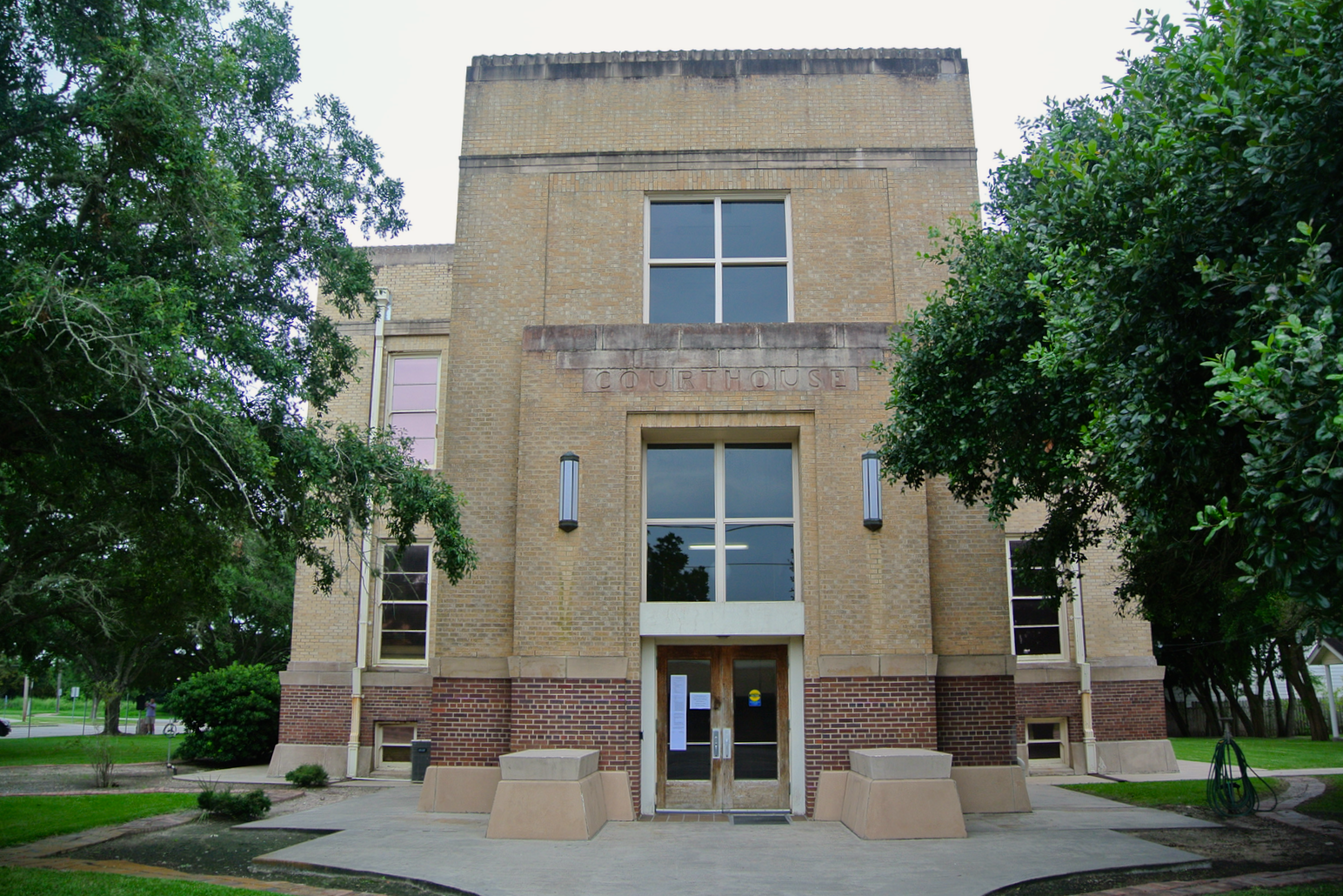 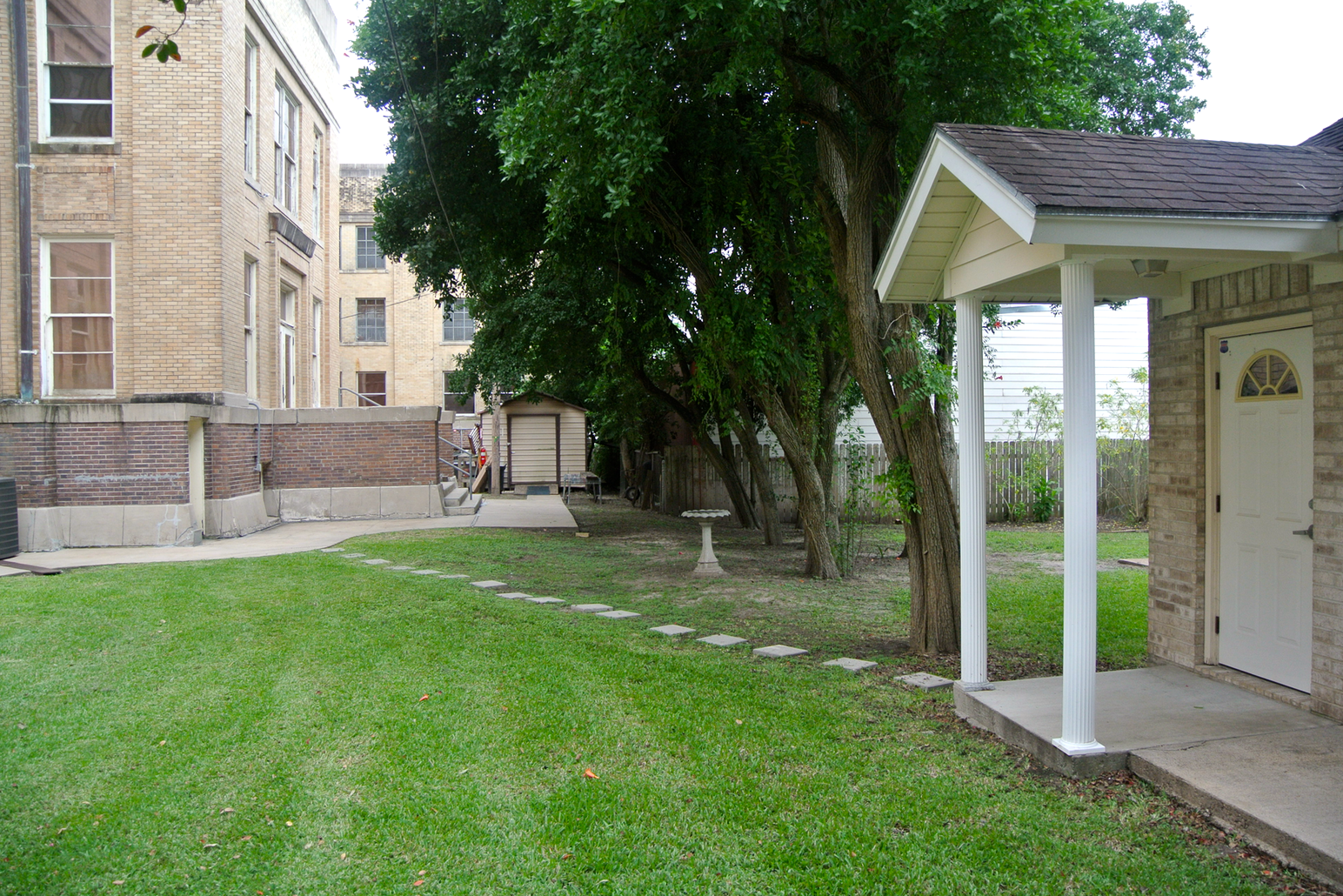 The rear of the courthouse is fairly secluded. 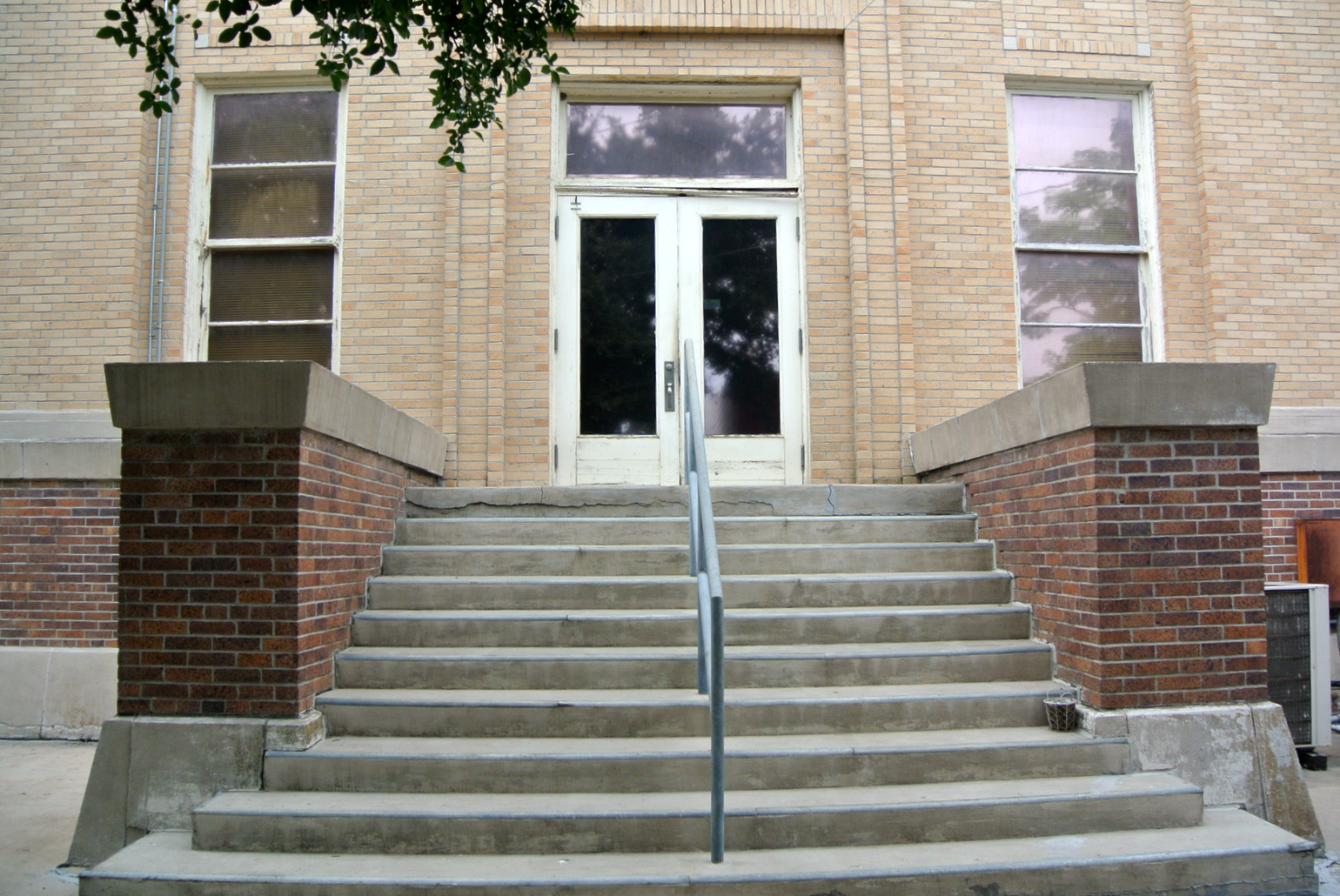 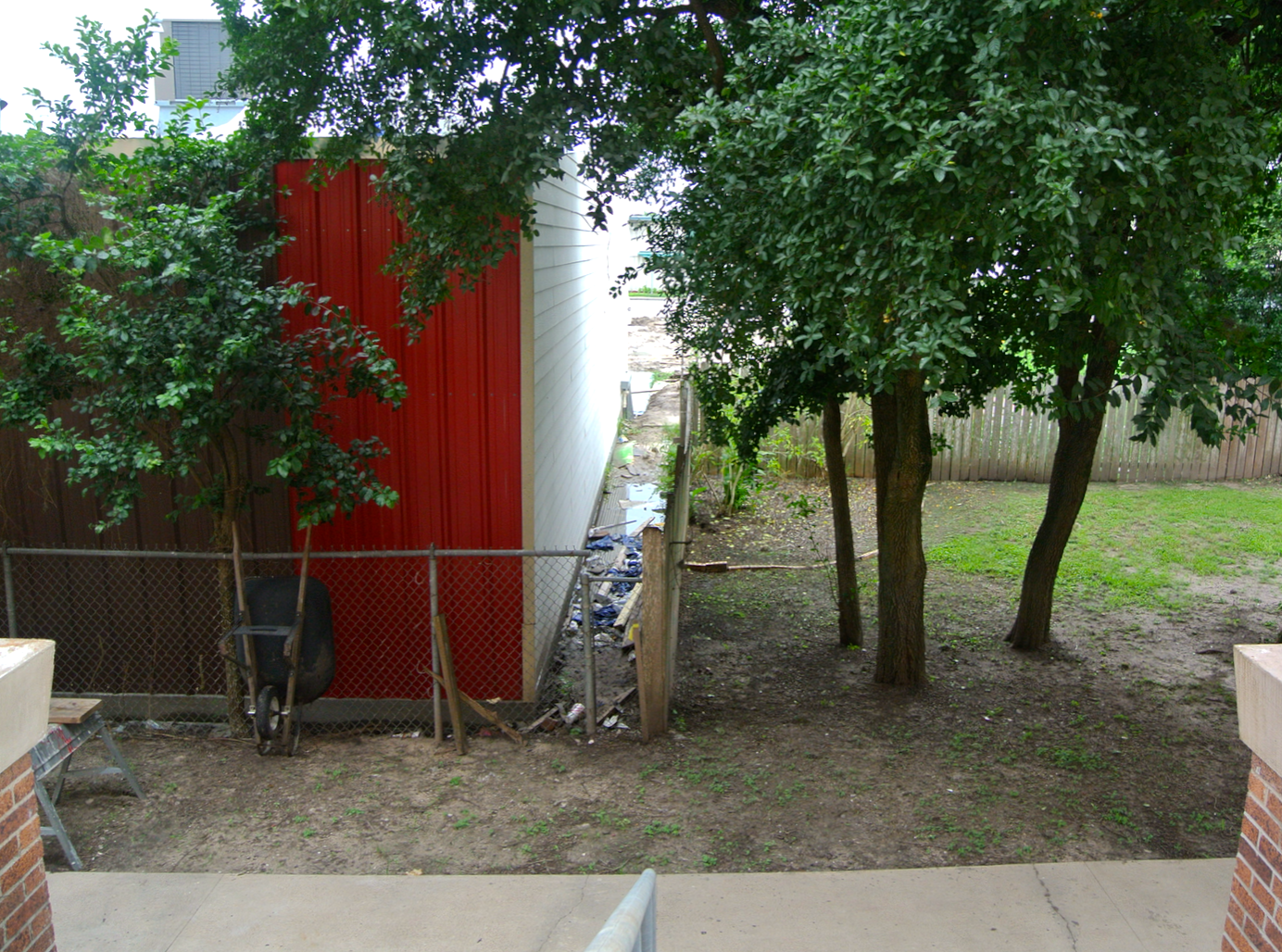 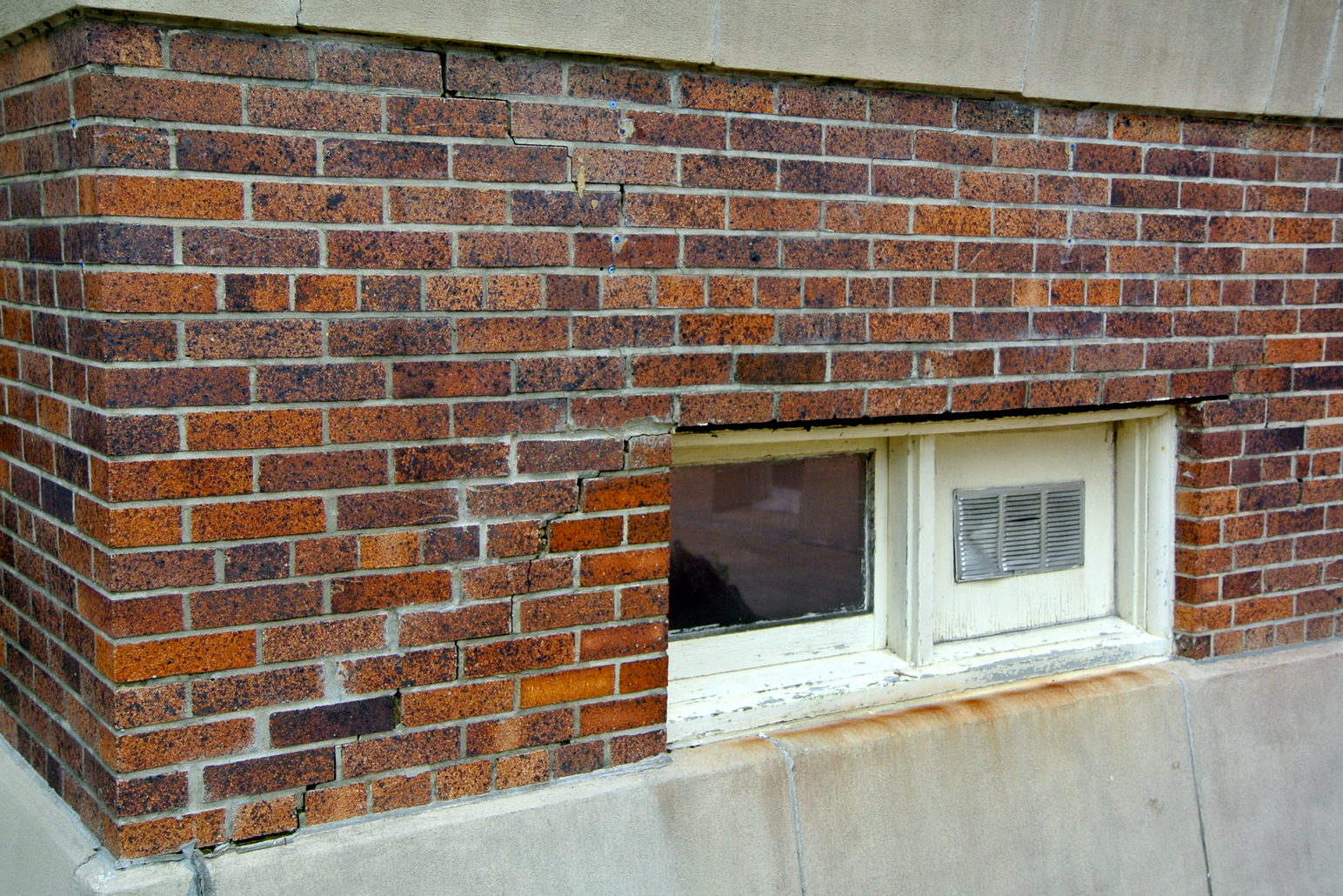 Out of all the sides, this one is in the worst shape.

Yet while some of the building shows serious signs of wear and tear, this courthouse does have some very nice ornamentation. 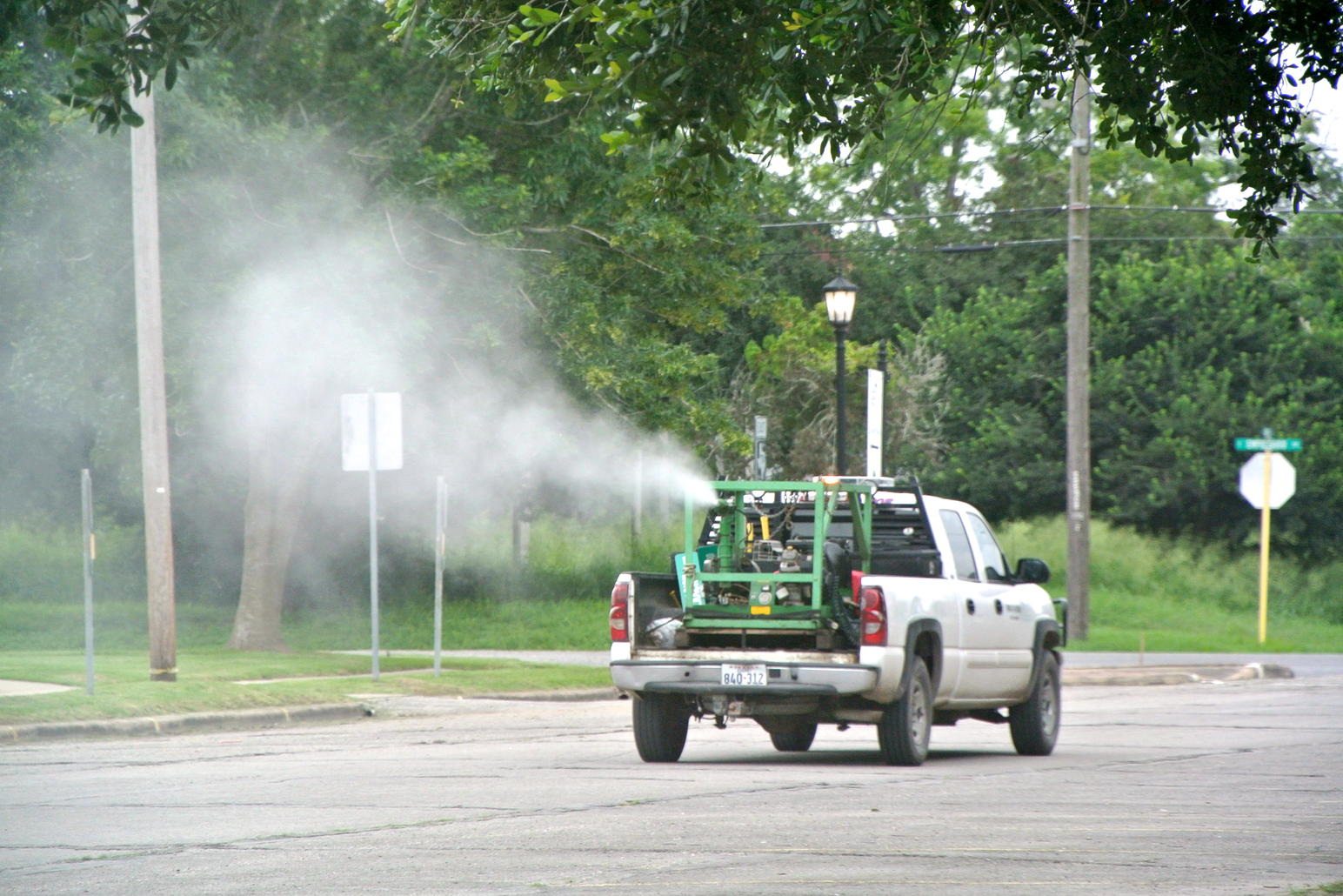 South Texas mosquitoes are killer in the summer (sometimes literally). I noticed a truck rolling by the courthouse while I was there, spraying pesticides. 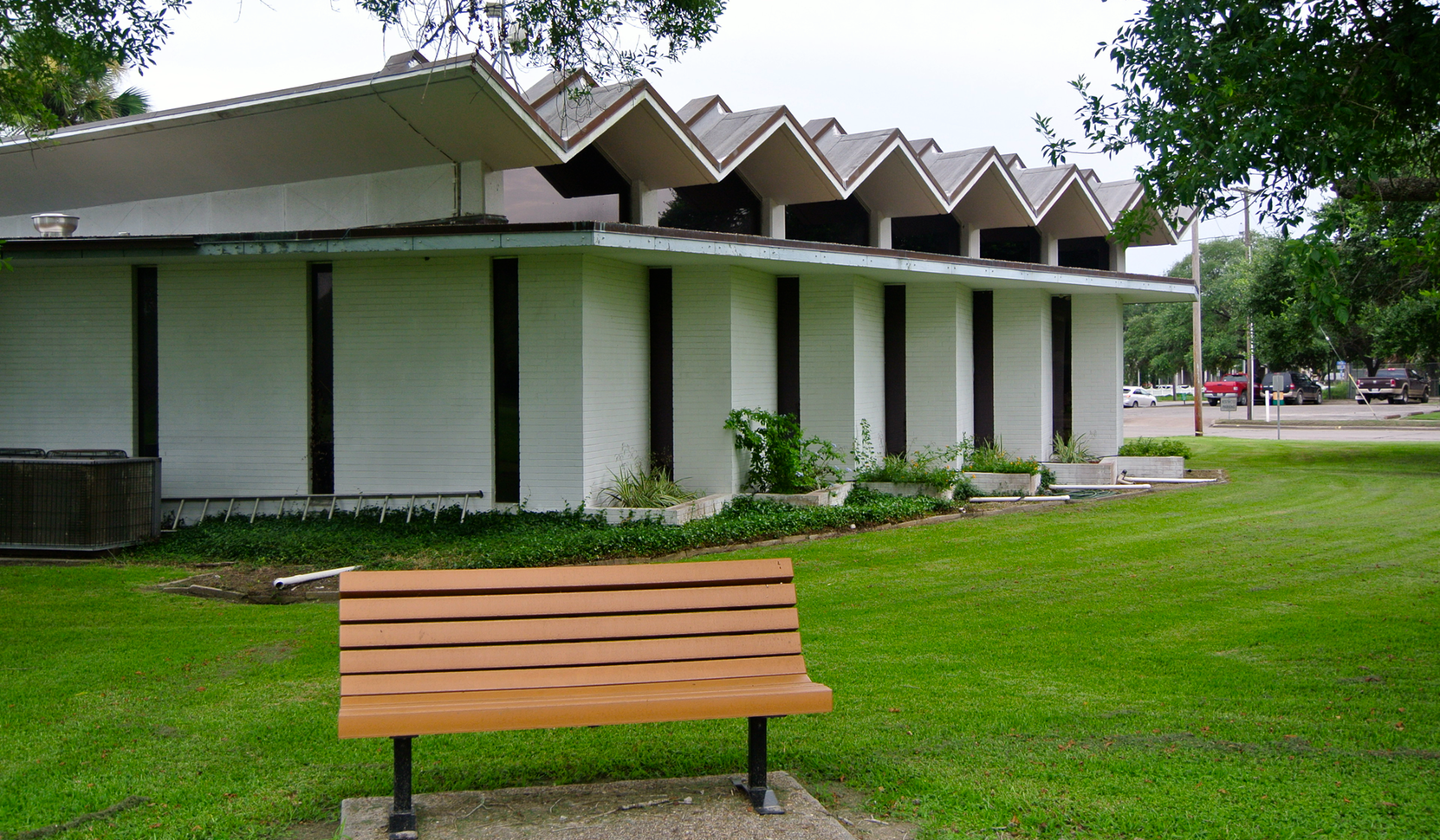 The Dennis M. O’Connor Public Library’s got a psychedelic roof.

A memorial to the Texas Independence soldiers that fought in the Battle of Refugio is across Commerce Street from the courthouse. 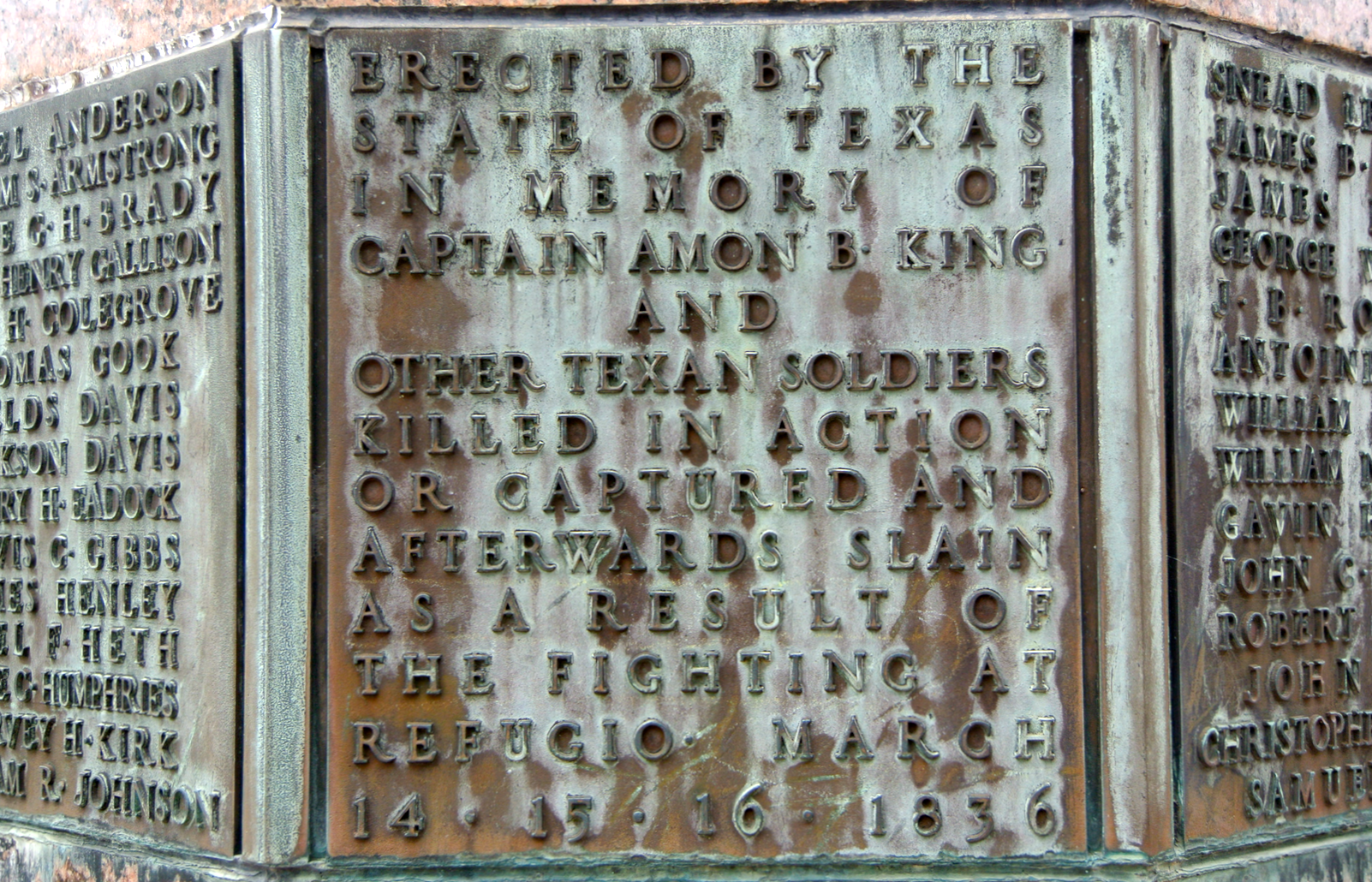 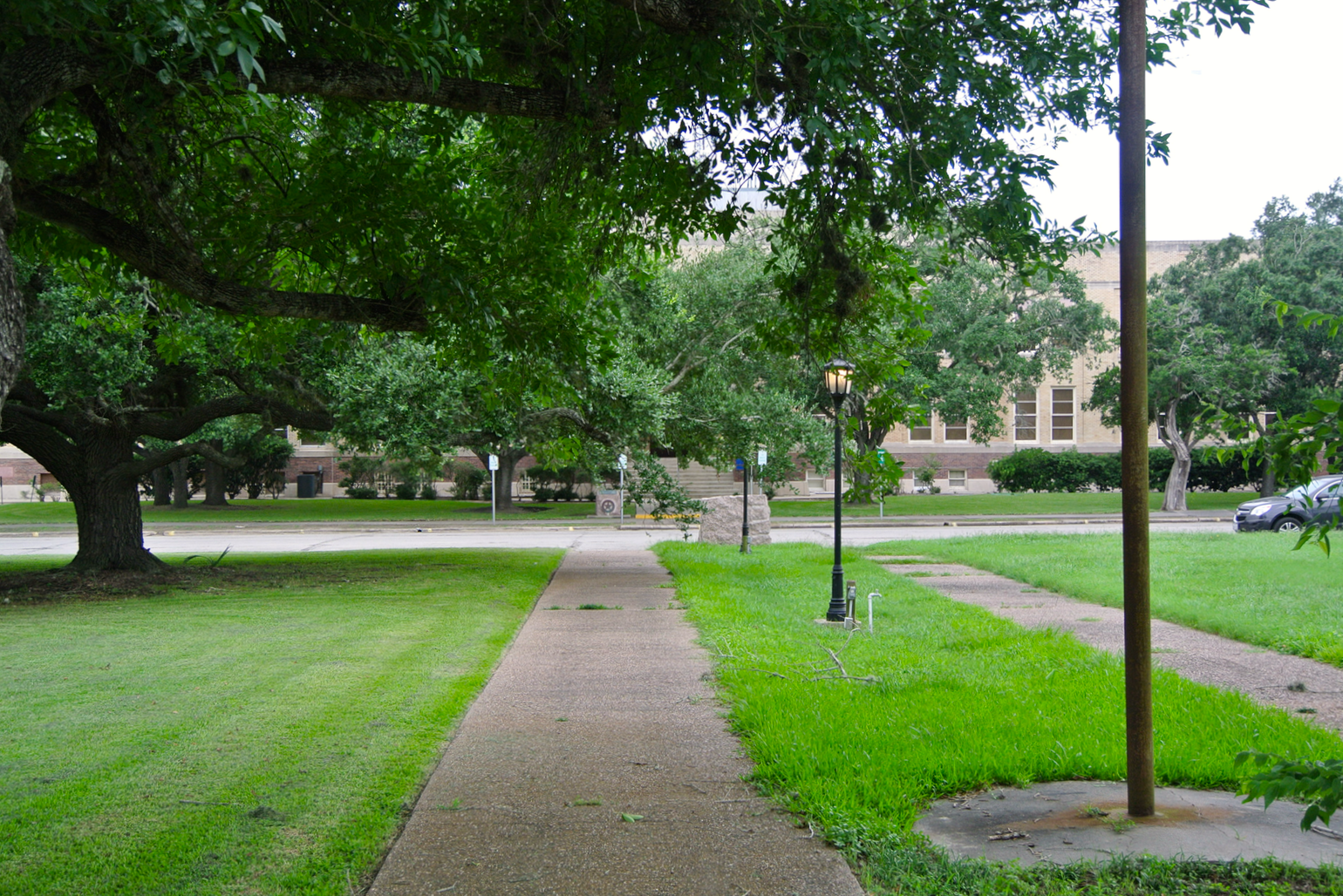 The courthouse, visible from the memorial 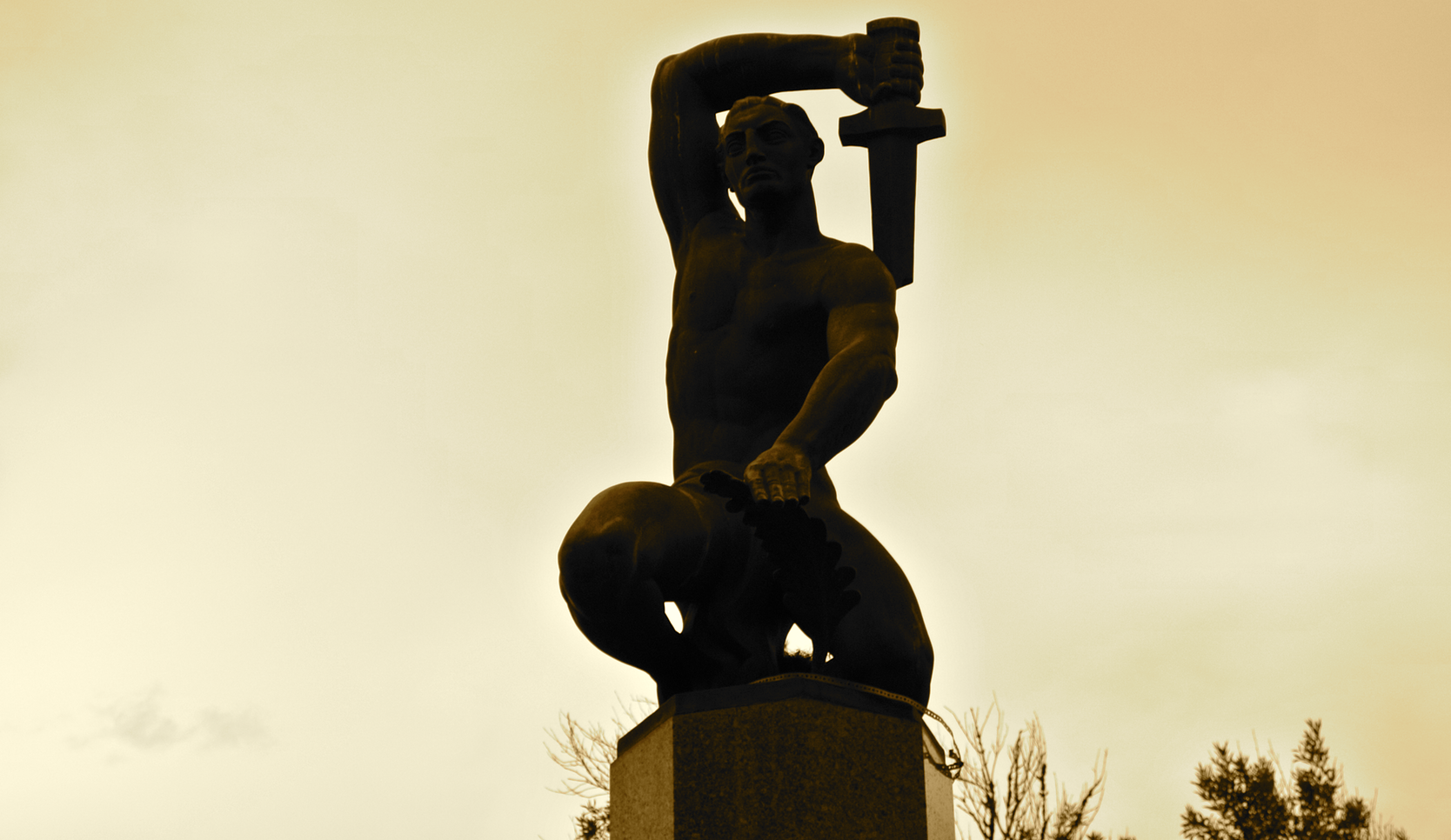