“San Patricio County covers 693 square miles of generally flat land with tall prairie grasses spotted by mesquite and live oak trees. Most of the county lies in the coastal plain, but in the far western area the surface is rolling with some caliche hills; elevations range from sea level to 200 feet. Soils consist of light to dark loam on the surface, with clayey subsoils. The area is drained by the Nueces River on the south and the Aransas River on the north, with Chiltipin Creek draining the north central portions.”

“In 1828 empresarios John McMullen and James McGloin contracted with the government of Mexico to settle 200 Irish Catholic families on eighty leagues of land in the area. The first groups of families, recruited from the Irish population of New York, landed at El Cópano and Matagorda in late 1829; two other groups soon followed. After a brief stopover at the old Refugio mission, the colonists proceeded to the north side of the Nueces River and established the town of San Patricio de Hibernia, named after the patron saint of Ireland.”

“In 1834 the colony was legally established as the Municipality of San Patricio in the Mexican state of Coahuila and Texas. By 1836 eighty-four land grants had been made in the colony, and about 500 people were living there. The area was engulfed in fighting during the early stages of the Texas Revolution. Fort Lipantitlán, built in 1833 across the Nueces near the colony, surrendered to a company of the colony’s settlers in 1835. In February 1836 a detachment of Texans commanded by Francis W. Johnson encountered a Mexican force in the town of San Patricio. All but four of the Texans were killed or captured. Most of the colonists subsequently moved to Victoria and other havens.”

“San Patricio County was established in 1836 by the Congress of the new Republic of Texas. Far larger than the current county, the original San Patricio County included territory later incorporated into other counties. Its original residents were slow to move back into the area, however, for fear of the periodic Mexican incursions; a Mexican force under Gen. Ráfael Vásquez raided the San Patricio area as late as 1842. The county was officially designated a “depopulated area” by the government during most of this time, though traders, soldiers, and various adventurers traveled through.” 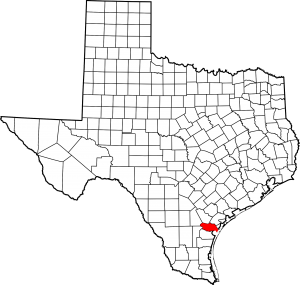 “Towards the end of the Civil War and in the years immediately following, settlers from other parts of the south in search of cheap land moved into San Patricio County. The new immigrants were especially concentrated in the southern parts of the county. Around 1870 Sidney G. Borden started Sharpsburg, which soon outstripped San Patricio in population and was the county’s only port. By 1870 there were 602 people, including sixty-four blacks, living in San Patricio County.”

“In 1871 Thomas M. Coleman and George W. Fulton joined with J. M. and Thomas H. Mathis in a partnership that formed the largest cattle firm in Texas. The Coleman, Mathis, and Fulton partnership, which held acreage in San Patricio, Goliad, and Aransas counties, flourished until an eighteen-month drought in 1878–79 wiped out much of its stock. When the partnership was dissolved in 1879 T. H. Mathis, who was awarded 64,000 acres of the firm’s land, began plans to develop a townsite on his property.”

“Development of the area was significantly encouraged by out-of-state investors, especially David B. Sinton, a wealthy Ohio banker who was an old friend of Fulton’s. Sinton and his son-in-law, Charles P. Taft, became major partners in the Coleman-Fulton Pasture Company. The ranch soon became known as the Taft Ranch. In 1893, after the Coleman-Fulton company donated 640 acres for a townsite near the center of the county, the Sinton Town Company was formed to develop the site. The new town, called Sinton, became the county seat later that year. In 1896 the St. Louis, Brownsville and Mexico Railway began to build into the county.”

“The development of the county intensified during the first years of the twentieth century, and particularly after 1909, when land agents began to widely advertise San Patricio County property to prospective farmers. New towns such as Odem (1904), St. Paul (1909), Edroy (1910), Taft, and Sodville sprang up along the railroads, as hundreds of new farmers moved into the area from northern Texas and other states. Meanwhile, trainloads of laborers were brought in from Mexico to clear the land of mesquite and prepare it for farming; large numbers remained to work in the fields, shaping the cultural and social development of the area.”

“Oil and gas discoveries in the region during the 1910s and 1920s helped to diversify the local economy, and in 1926 a gas pipeline was laid from neighboring Refugio County gasfields to Aransas. San Patricio County’s population more than doubled during the 1920s, and by 1930 there were 23,836 people living there. Many farmers suffered during the Great Depression of the 1930s. Low prices, federal crop restrictions, and other factors combined to drive tens of thousands of acres out of production.”

“The area’s population grew to 28,871 by 1940, and agriculture revived during the 1940s, but farm mechanization and consolidation led to a continuing decrease in the number of farms. By 1959 there were only 816 farms (393 operated by tenants) in the county. Though cotton production remained relatively high, sorghum became an increasingly important crop.”

“Two of the world’s largest marine rig builders operated on the bay, and Ingleside was designated the homeport for the United States Navy’s Battleship Wisconsin battle group. Aransas Pass was home to about 300 shrimp boats (see SHRIMPING INDUSTRY), and seafood landed in Aransas Pass and Ingleside earned more than $60 million annually. In 1990 there were 59,288 people living in the county.”

“There are eight incorporated cities in the county, including Sinton (population, 5,712), the seat of government; Mathis (4,973); Odem (2,415); Taft (3,056); Gregory (1,926); Portland, (15,553, partly in Nueces County); Ingleside (9,605); Aransas Pass (8,305, partly in Nueces and Aransas counties); and San Patricio (387, partly in Nueces County). Edroy and St. Paul are not incorporated. Special events include the World Champion Rattlesnake Races held at San Patricio in March, the Fish-A-Rama held in Mathis each May, and the Shrimporee held in Aransas Pass each May. Taft hosts a Boll Weevil Festival in September, and an Old Fiddler’s Festival is held in Sinton in October.”

This courthouse was the fifth to ever stand in San Patricio County, succeeding a long line of extinct former courthouses. It was, however, arguably the most remarkable building of that group. That’s because its design was sent to Sinton in the early 1890s by renowned architect John Riely Gordon himself. This Richardsonian Romanesque-inspired courthouse clearly bears his signature corner entry plan.

Gordon’s plans were accepted by commissioners and work began promptly. Otto P. Krueger led that construction effort. After completion, this building stood for approximately thirty-four years until it was demolished in favor of something modern modern (circa 1927). A shame. 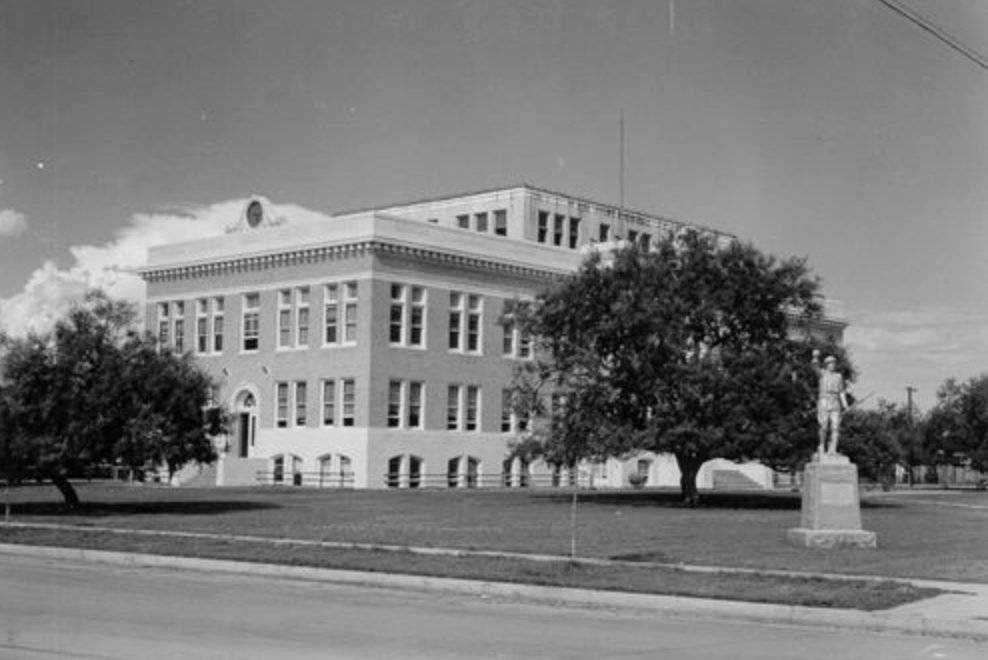 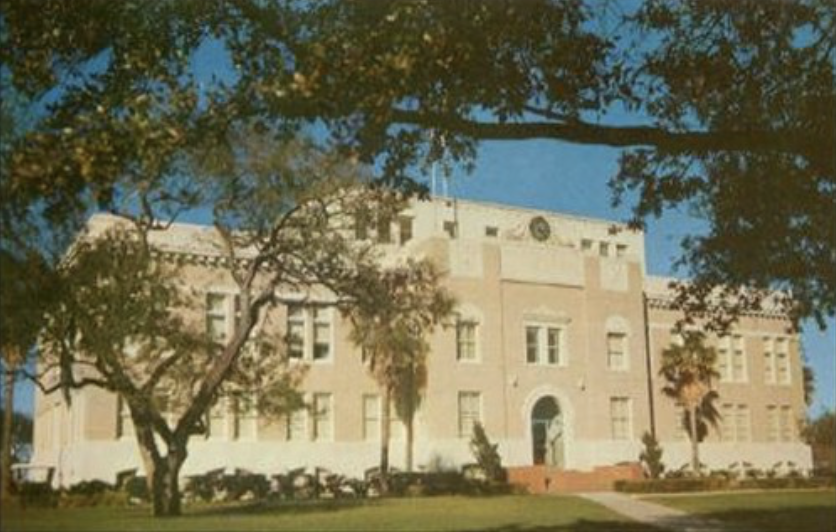 The successive building arrived just before the full swing of the Moderne era had hit Texas forcefully, and so historians attribute pieces of its design to the remnants of the Classical Revival style. That trend, after all, was just about to finally slow to a halt by 1928. Henry T. Phelps, notable architect in his own right, provided the designs here.

Additional remodeling efforts were carried out later on in the courthouse’s history by M.H. Ryland of Uvalde, but none were drastic enough to alter the building’s overall appearance. It looks much the same today as it did in 1928, except for a large annex constructed around its northern side at some point in history. 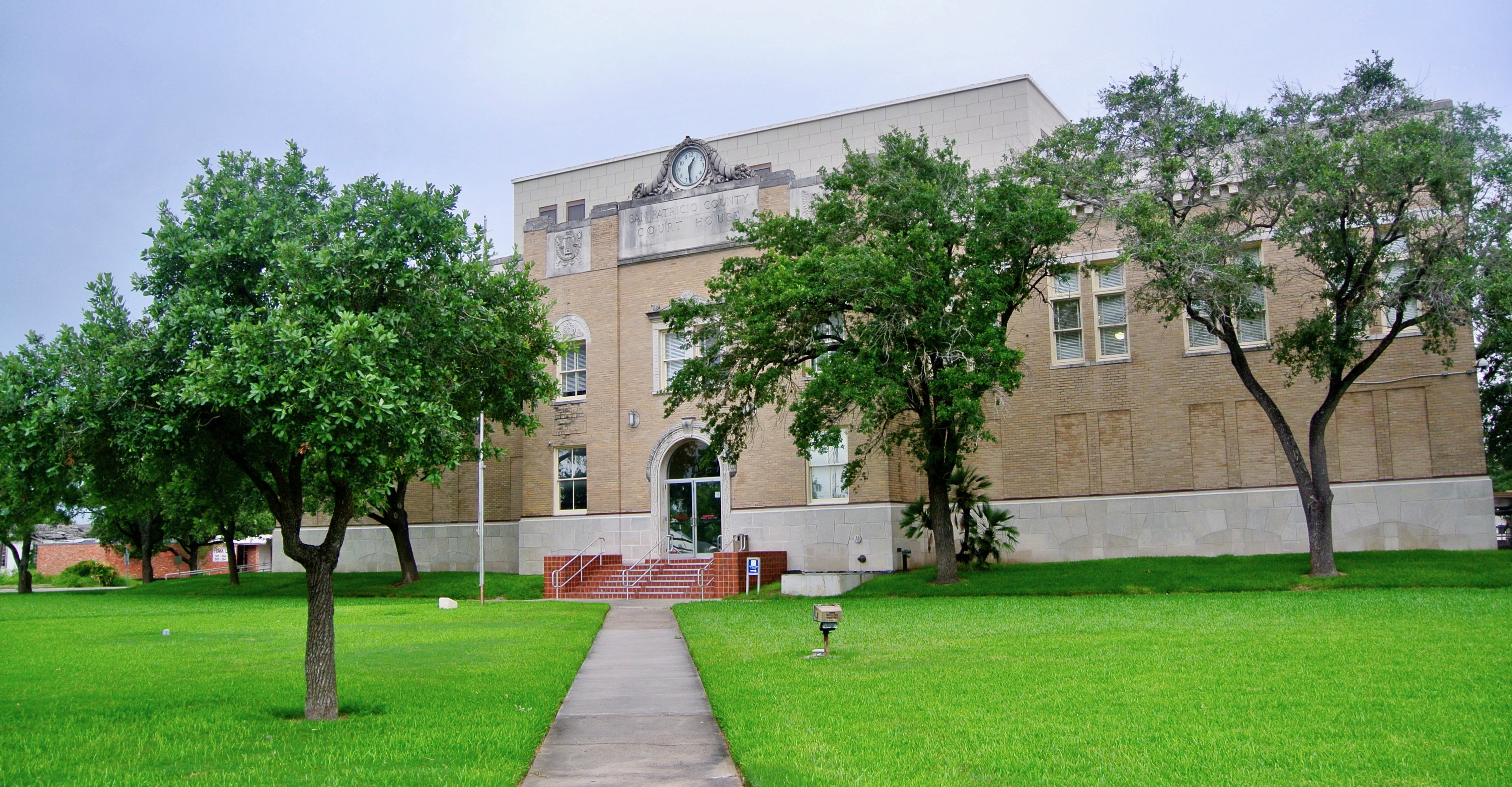 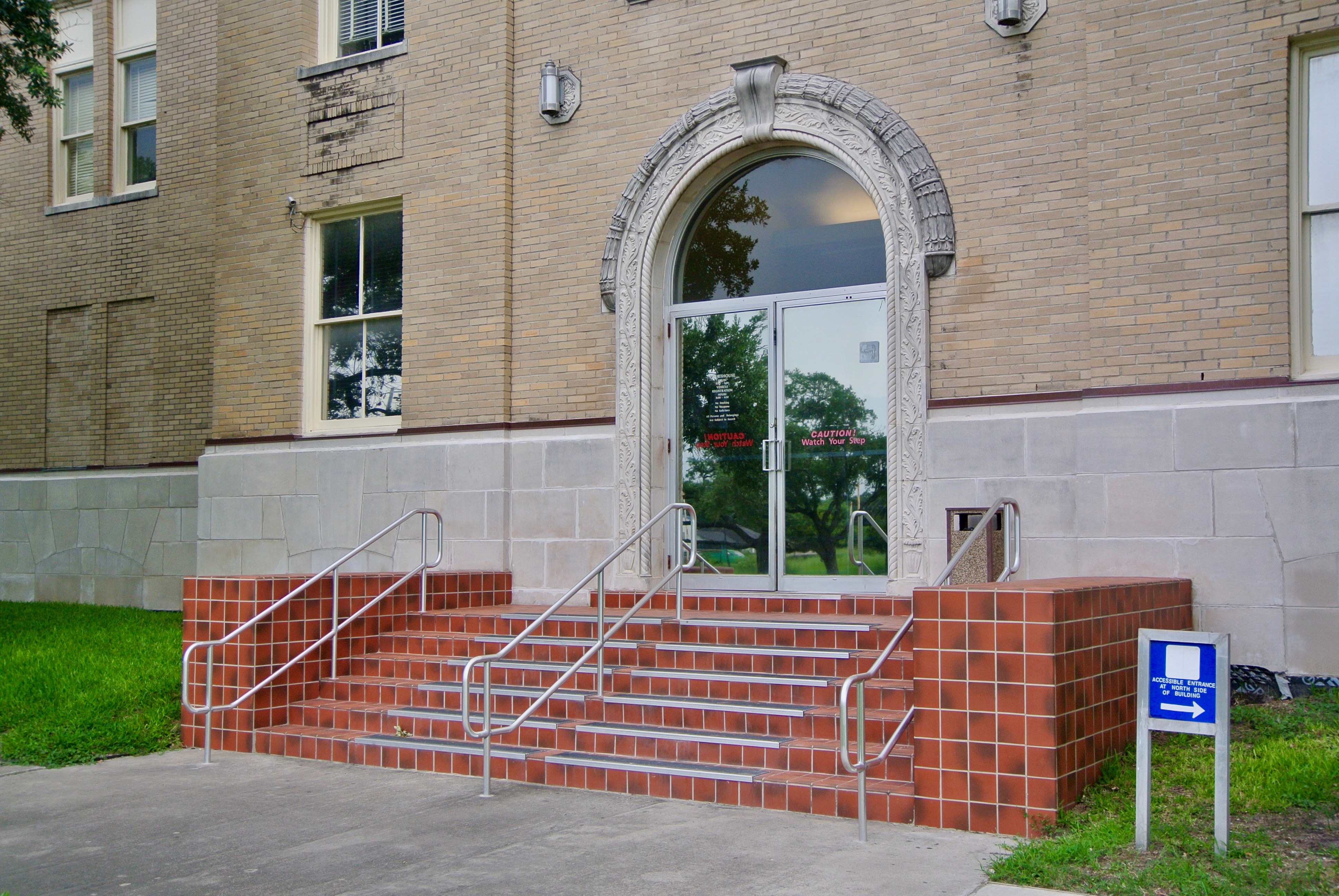 This is the main entrance. 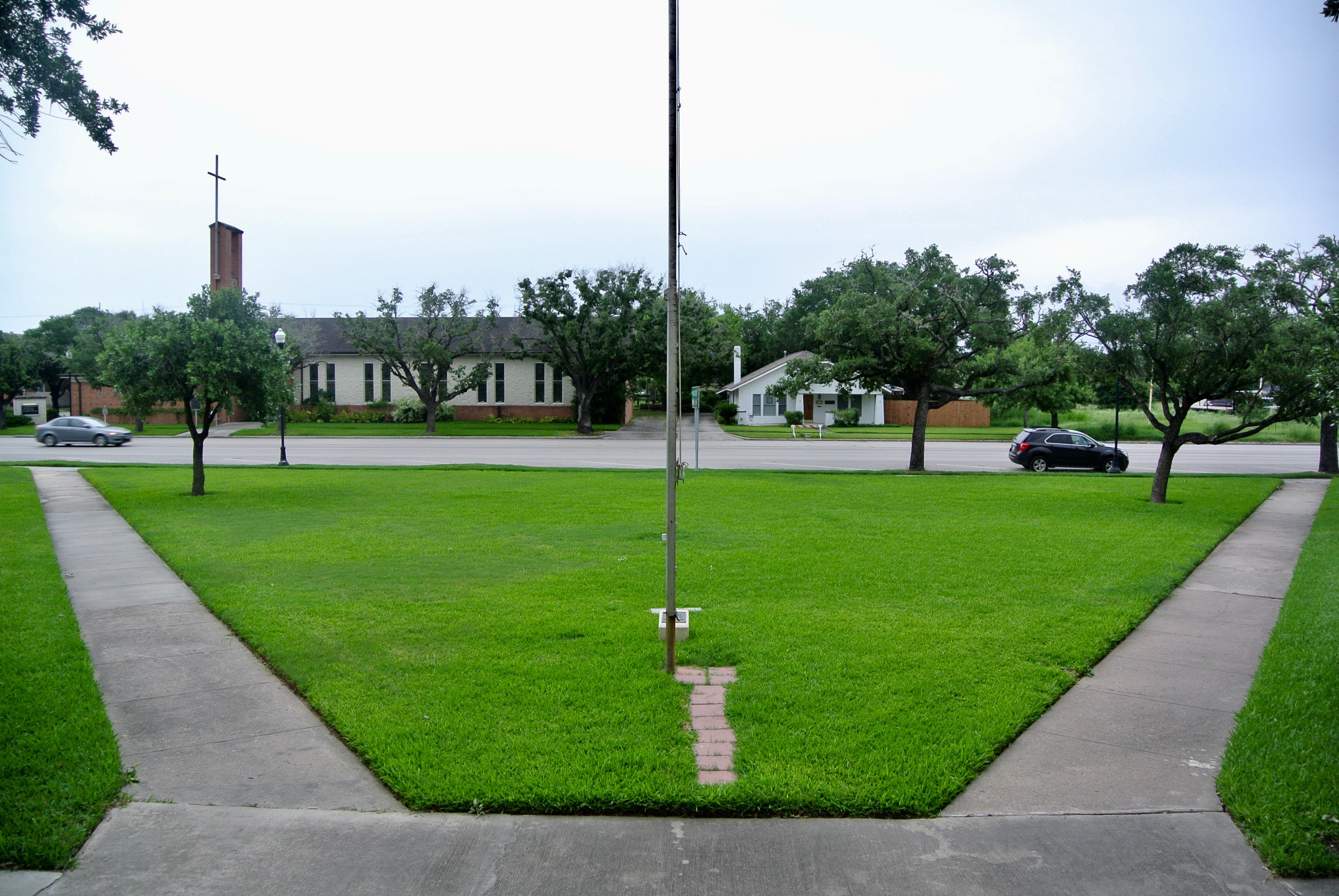 Here’s its view of Sinton Street. 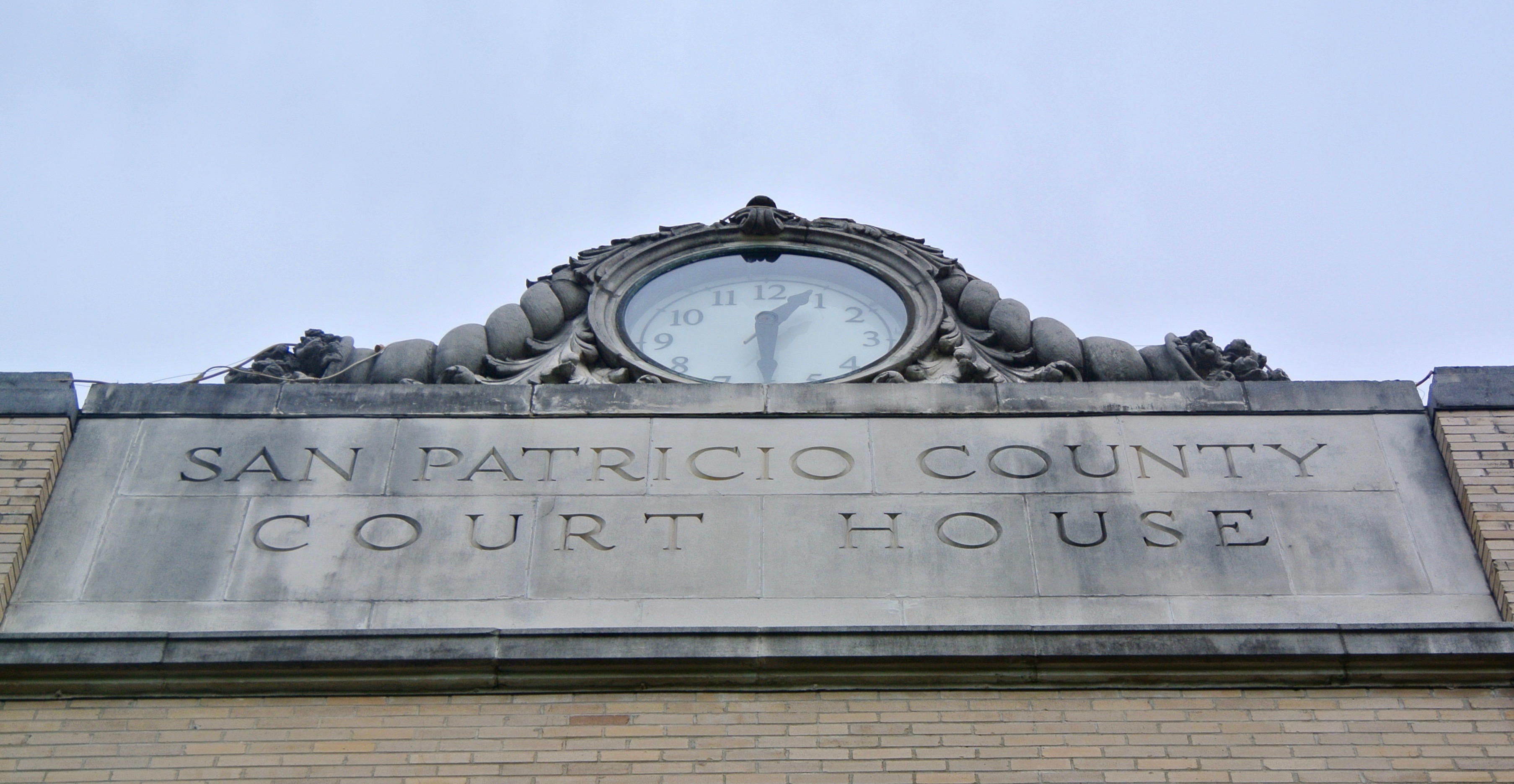 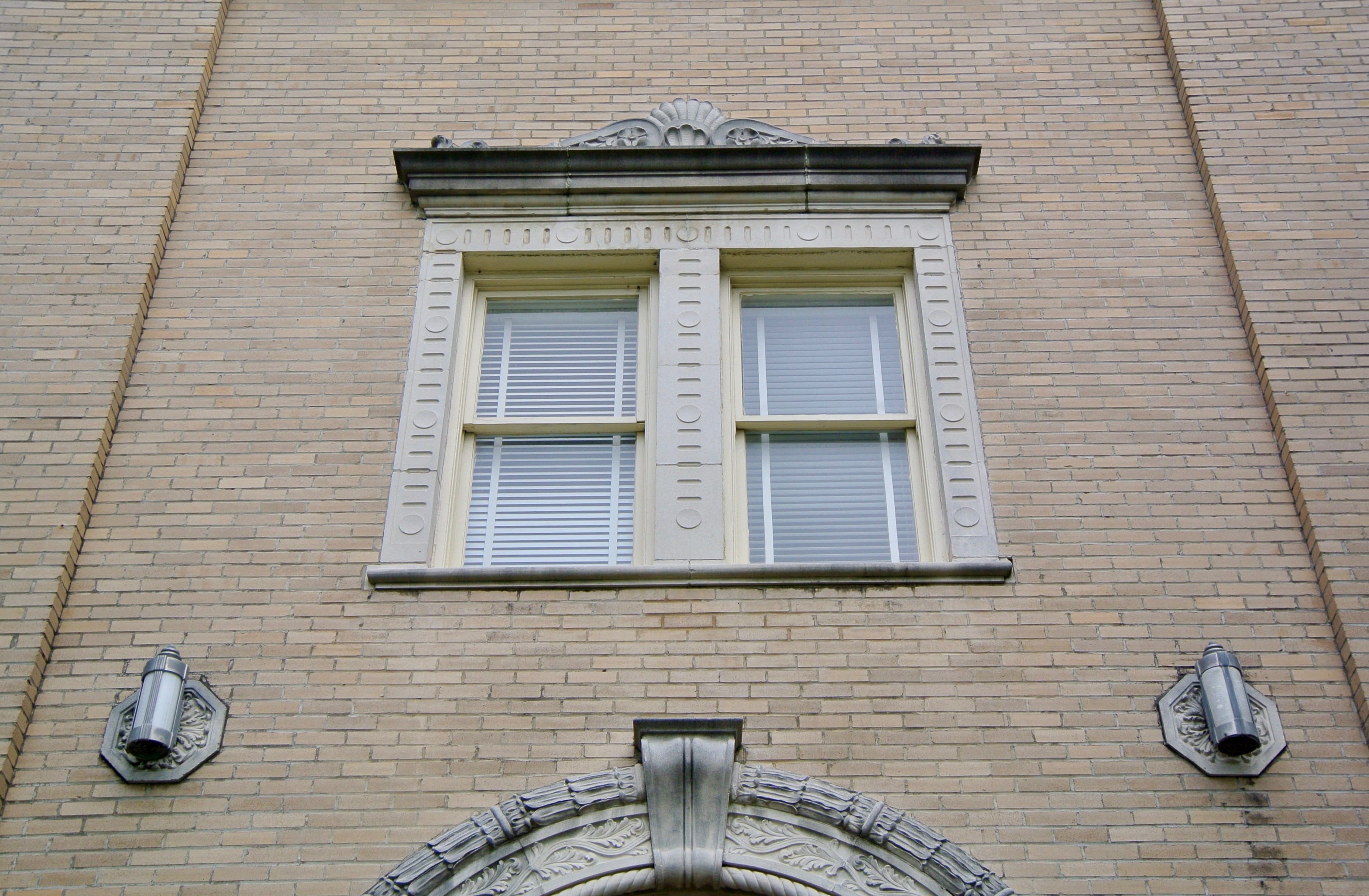 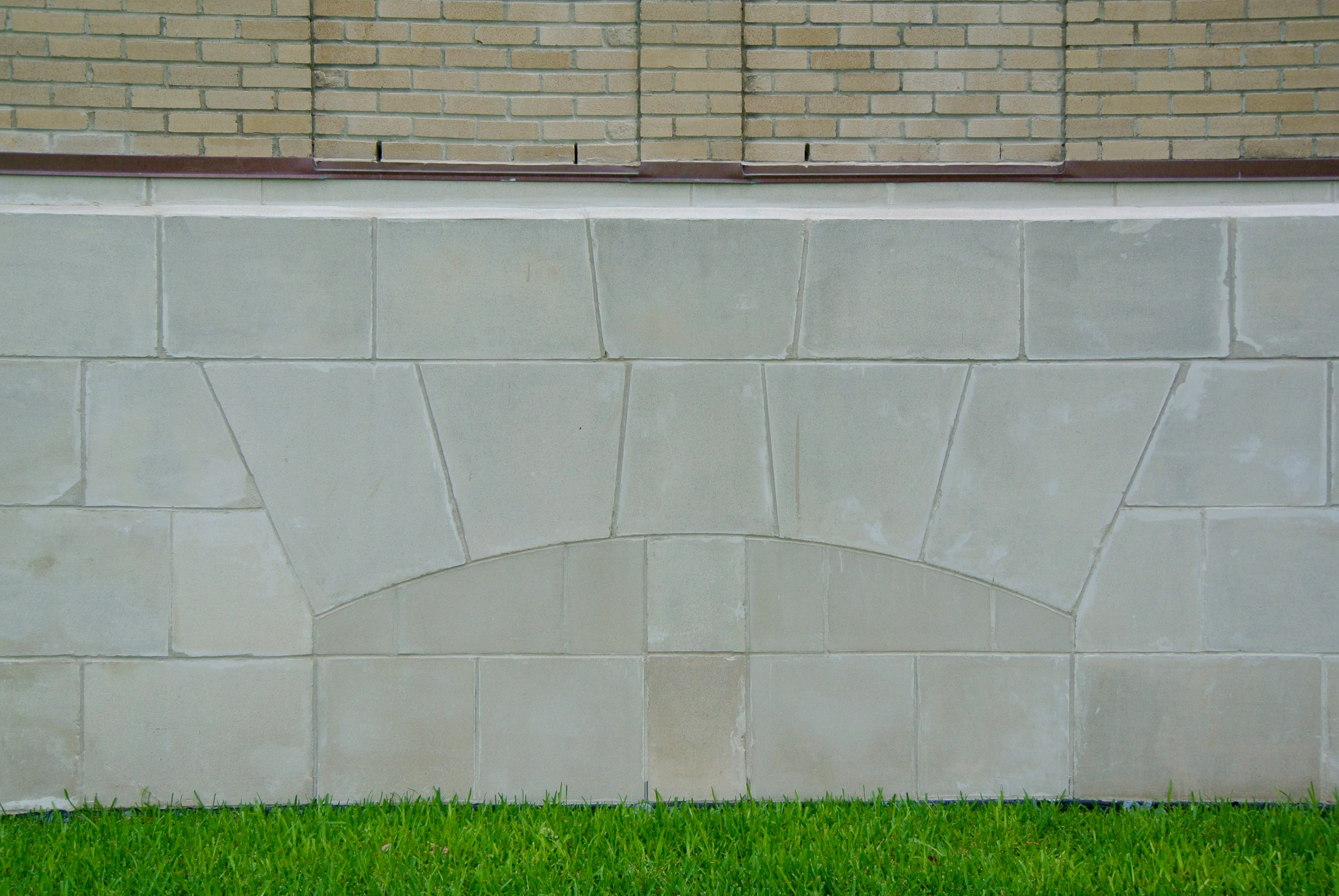 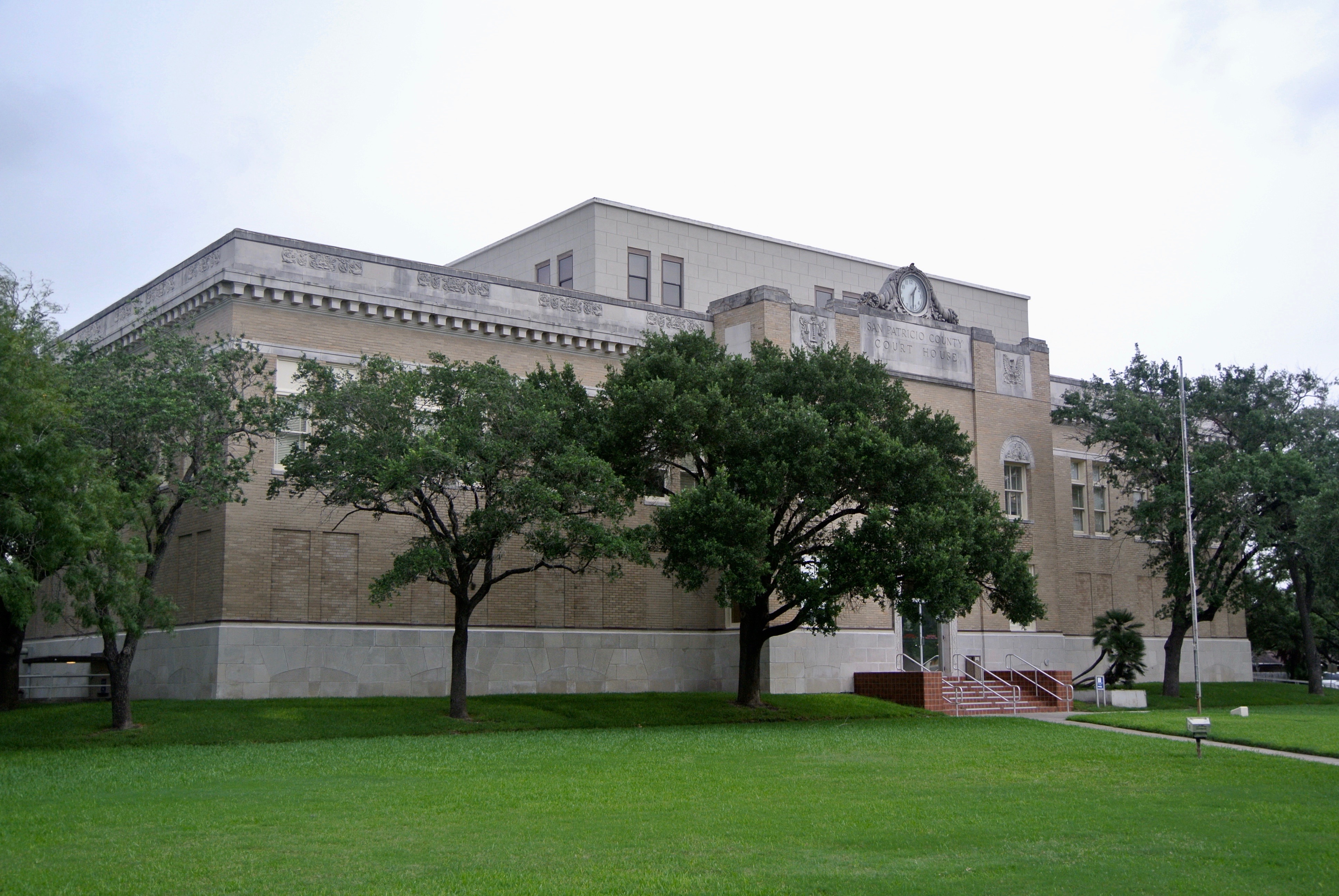 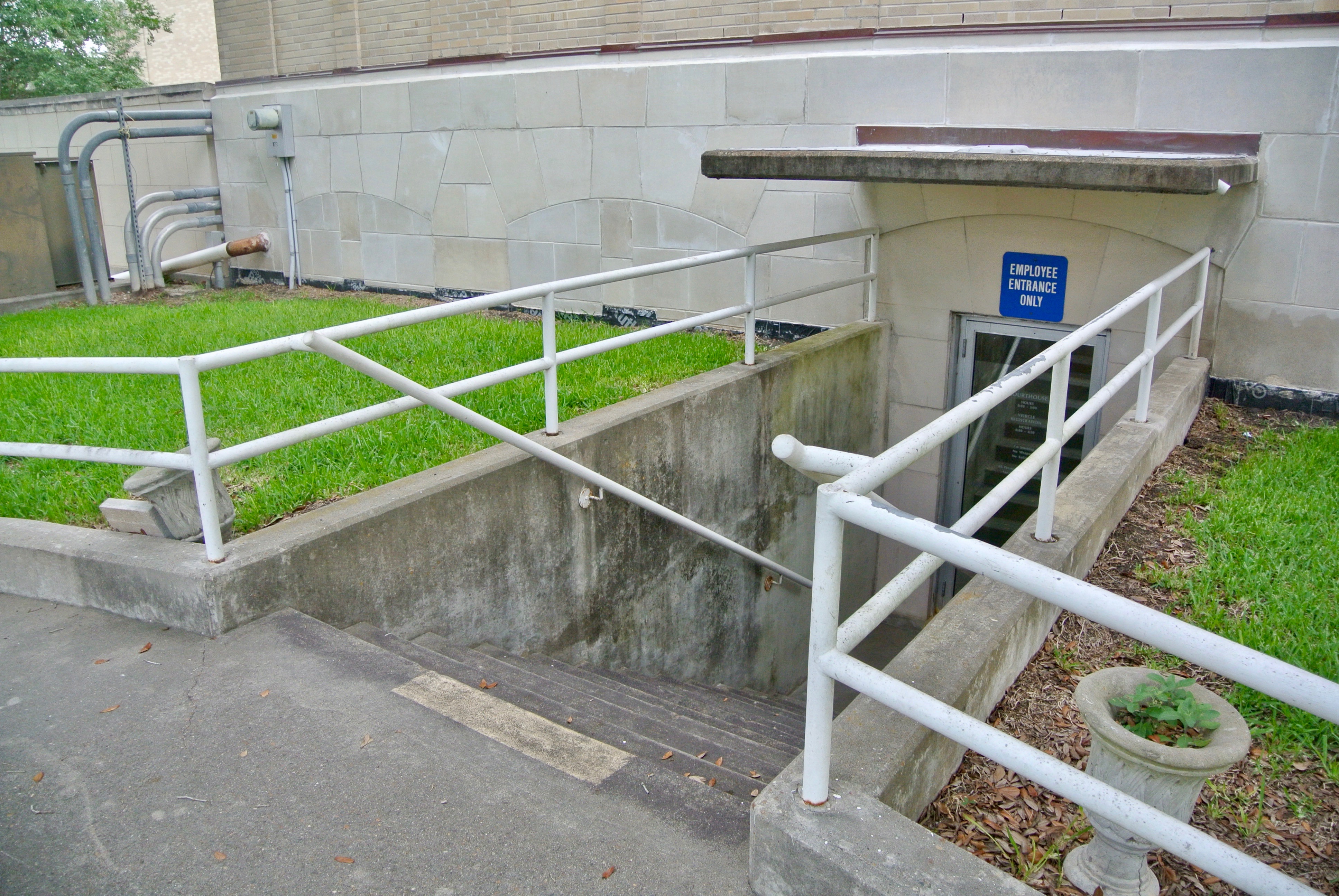 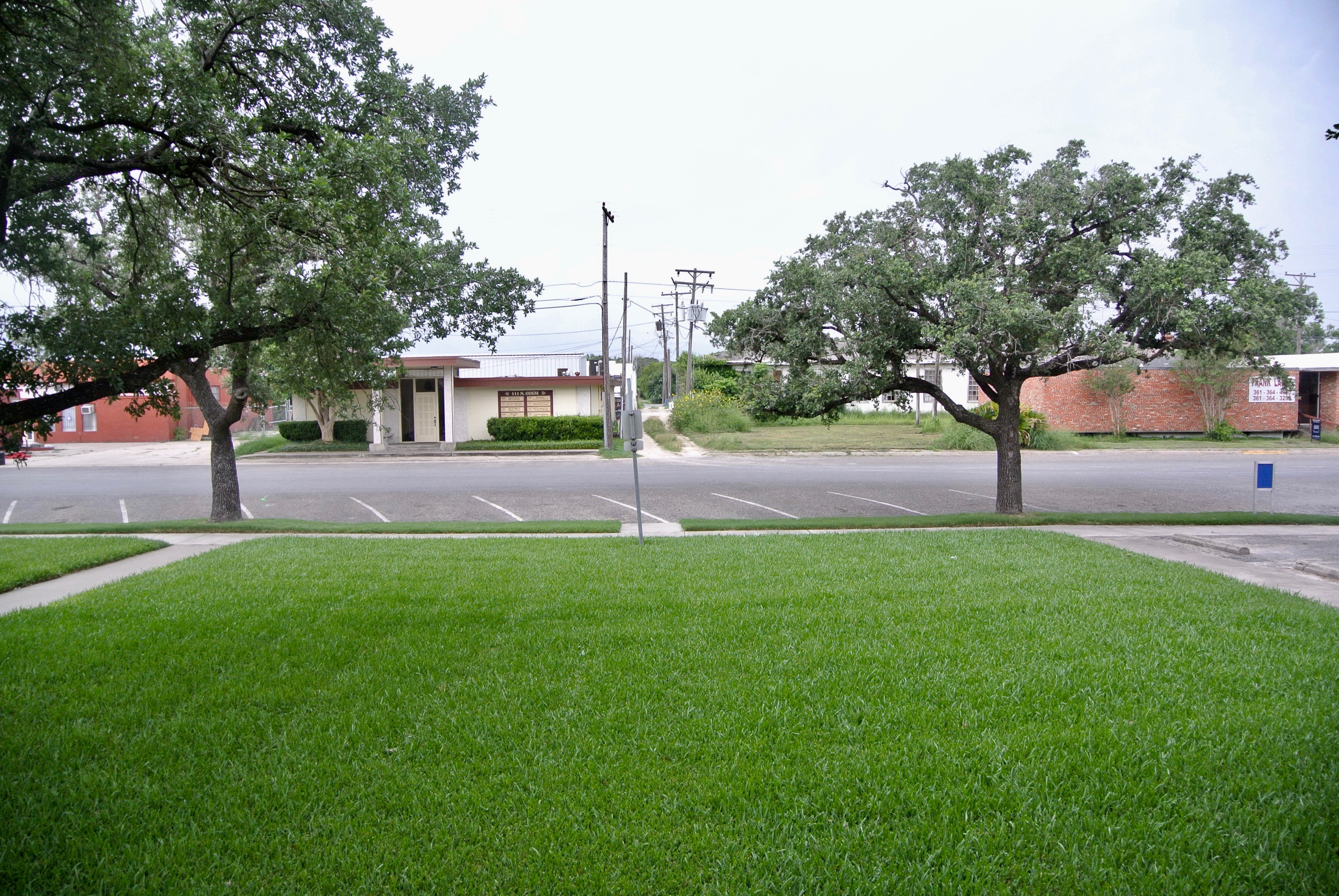 …and its view (of Odem Avenue) 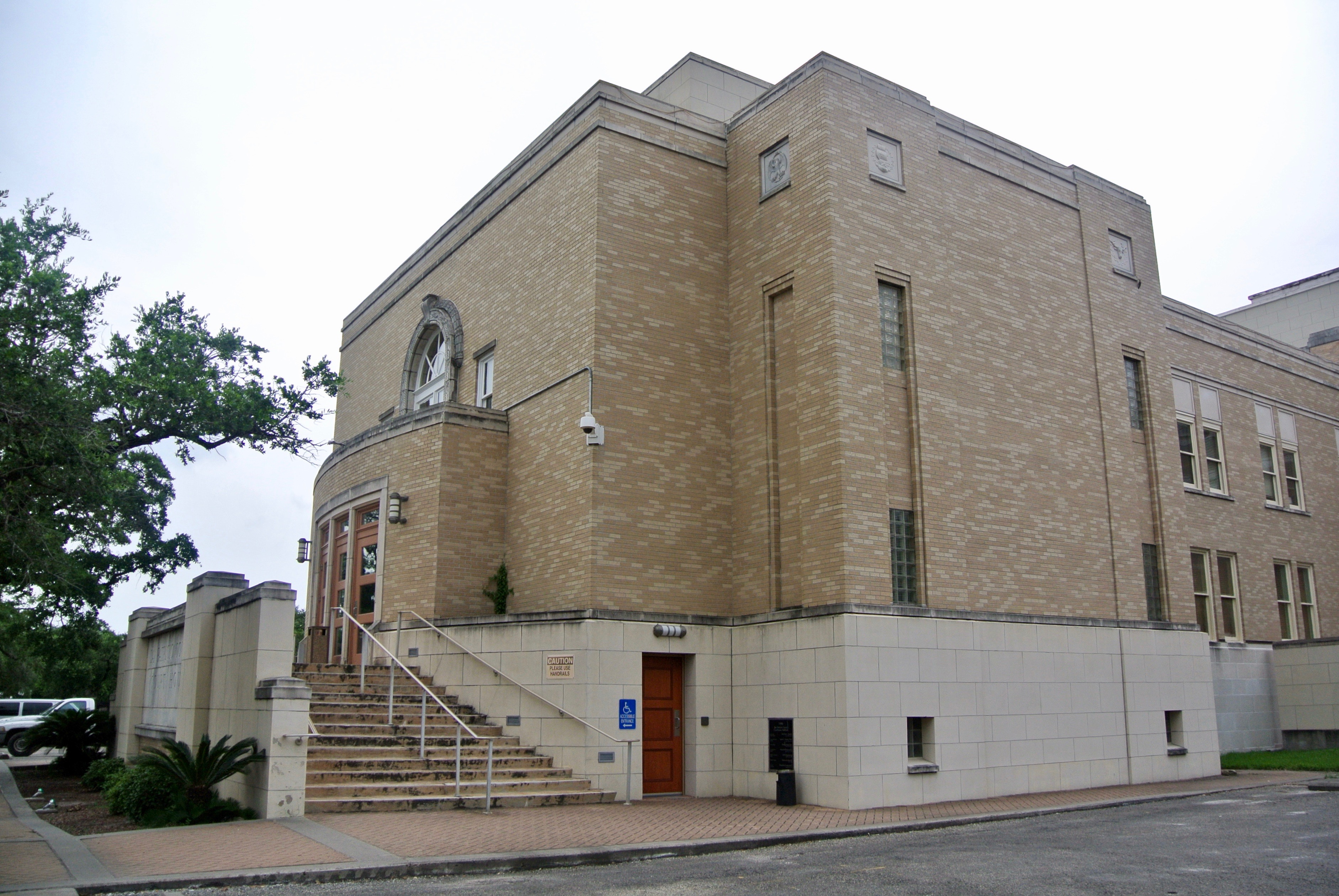 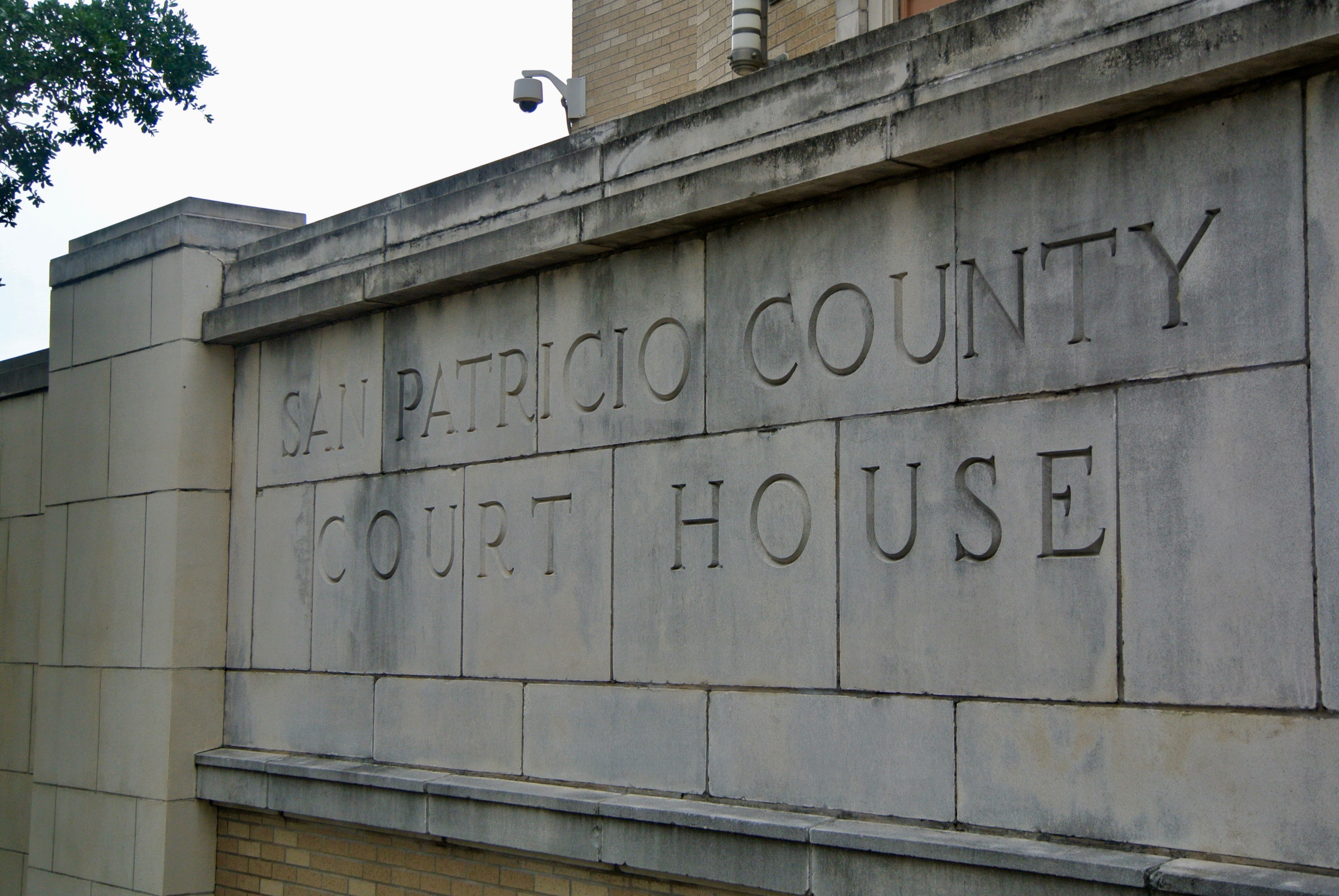 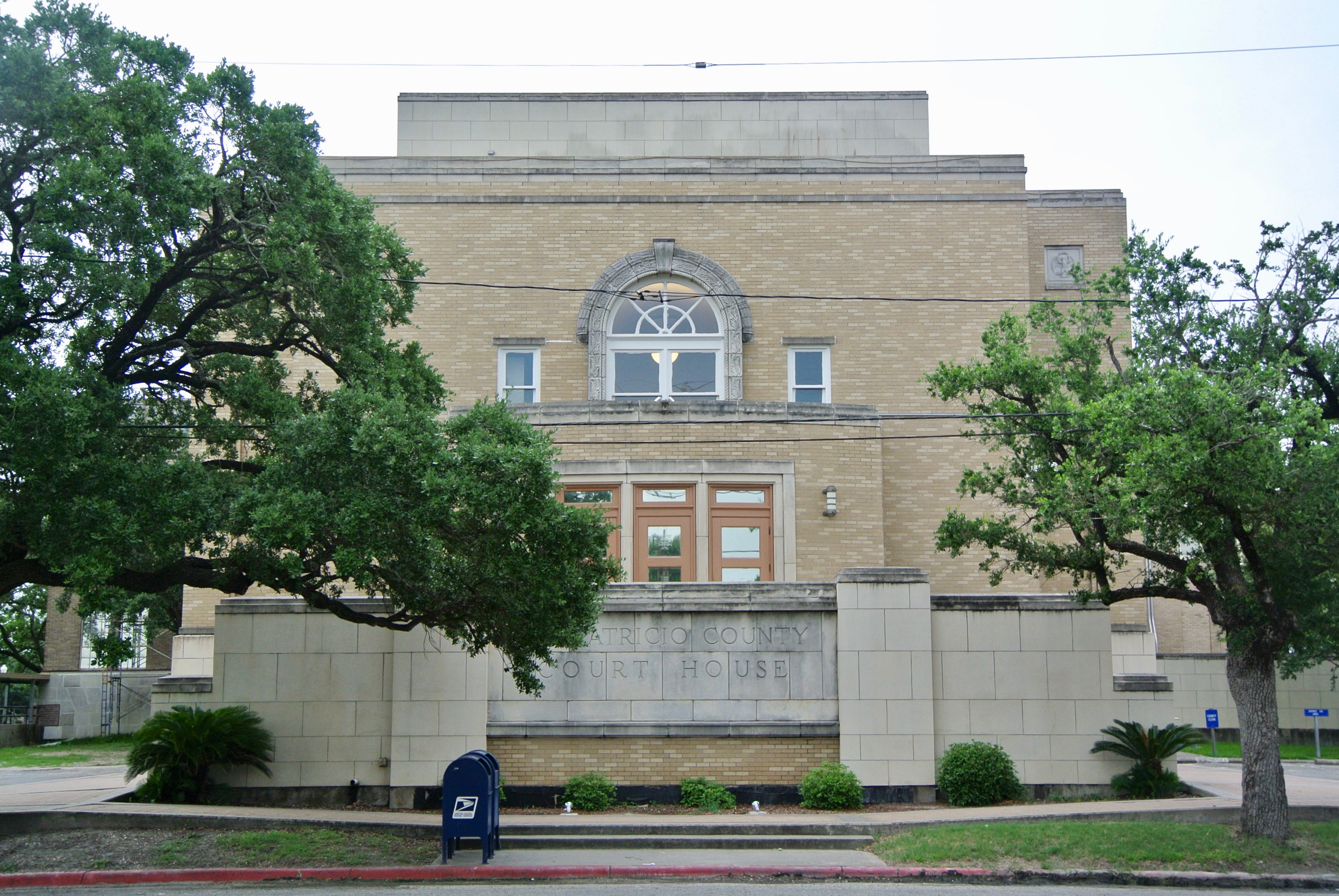 The northern façade, on Market Street 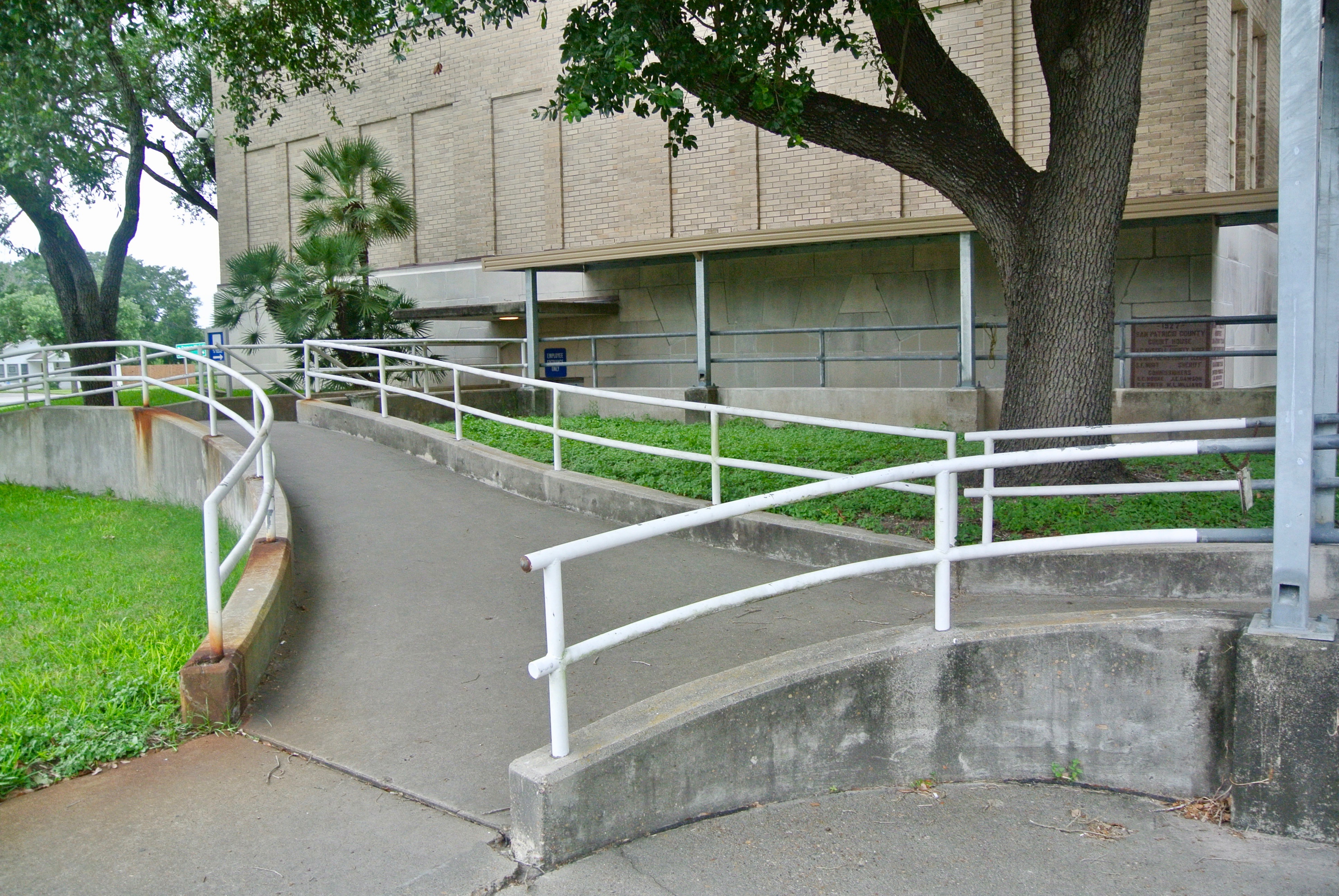 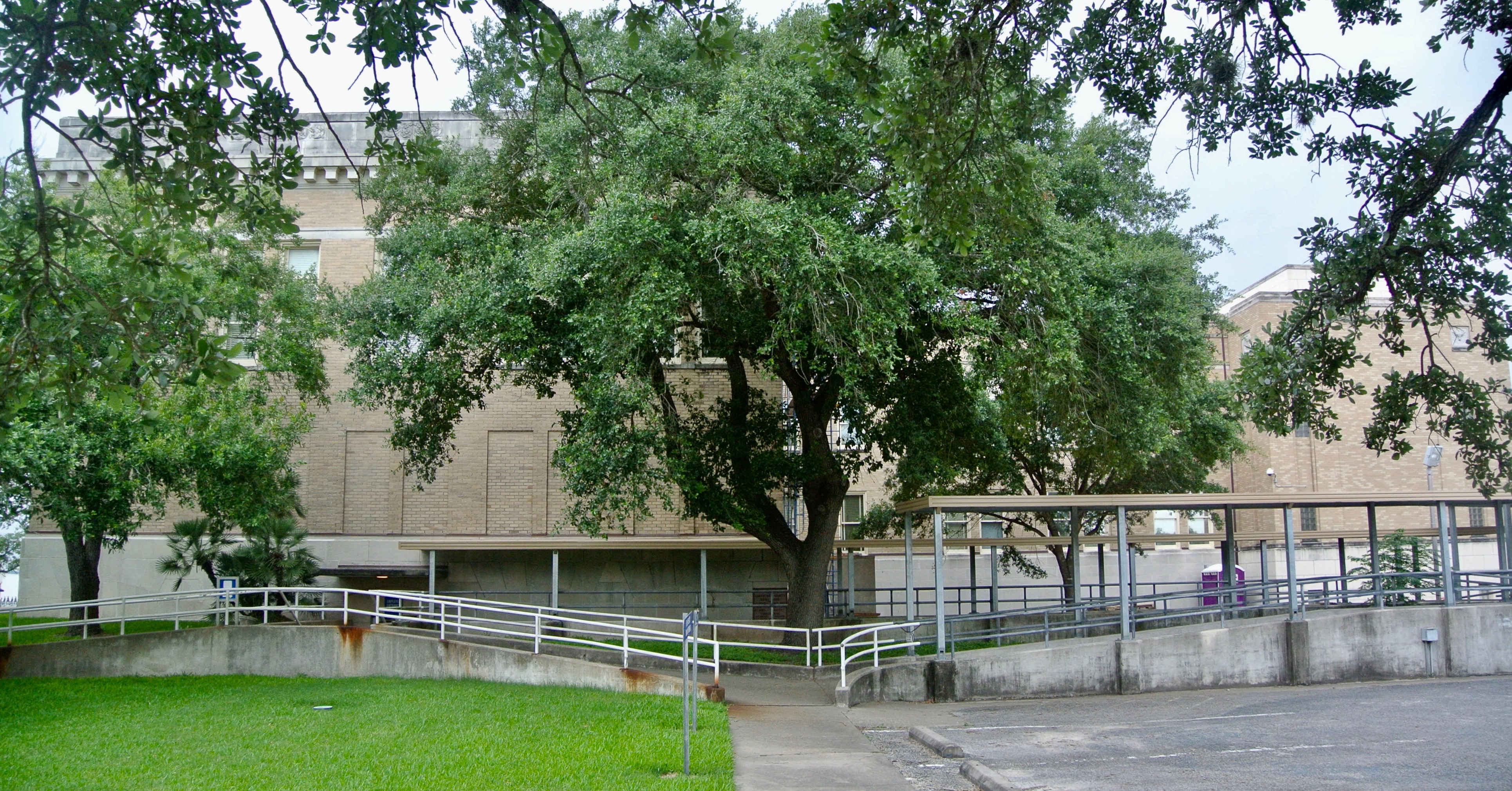 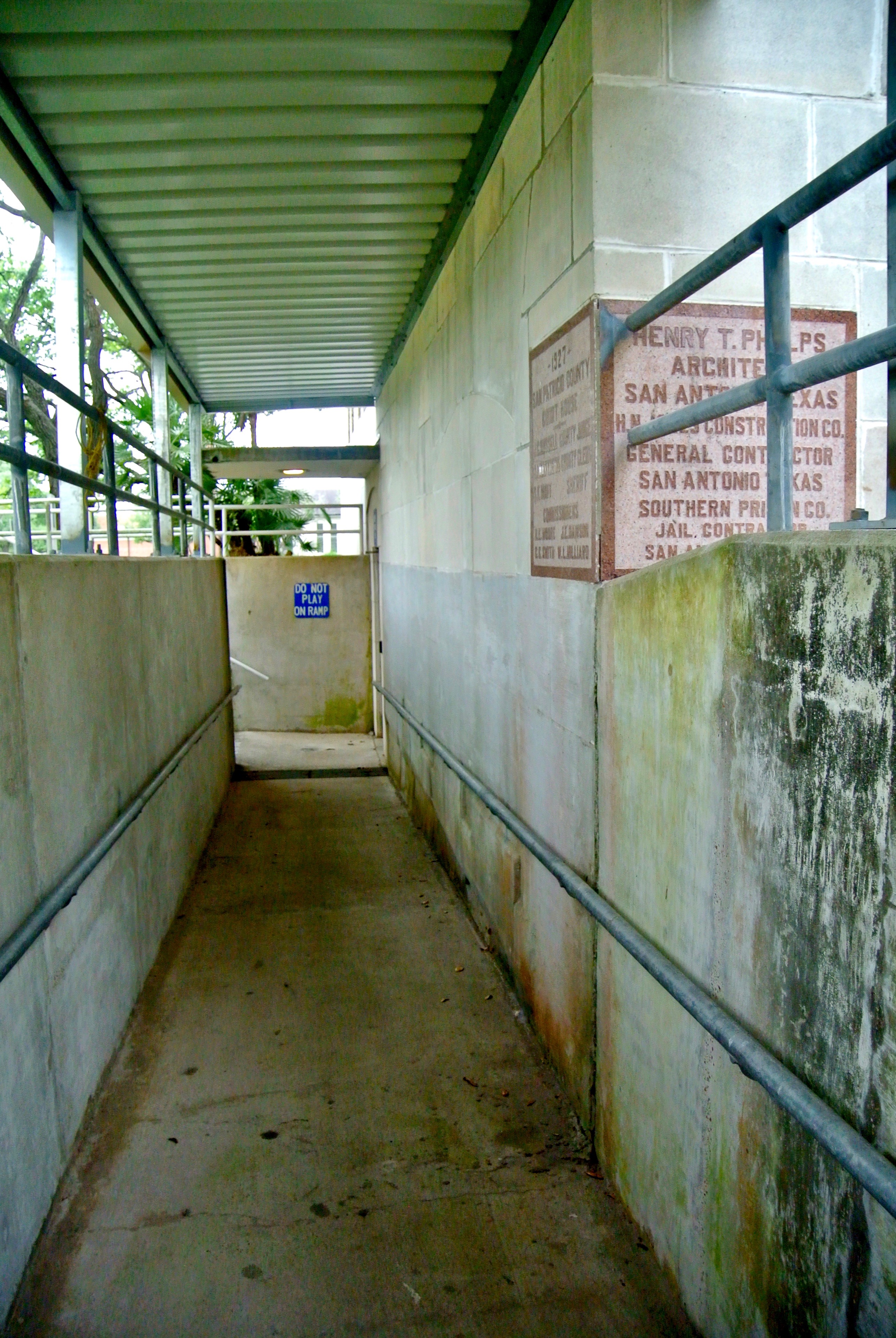 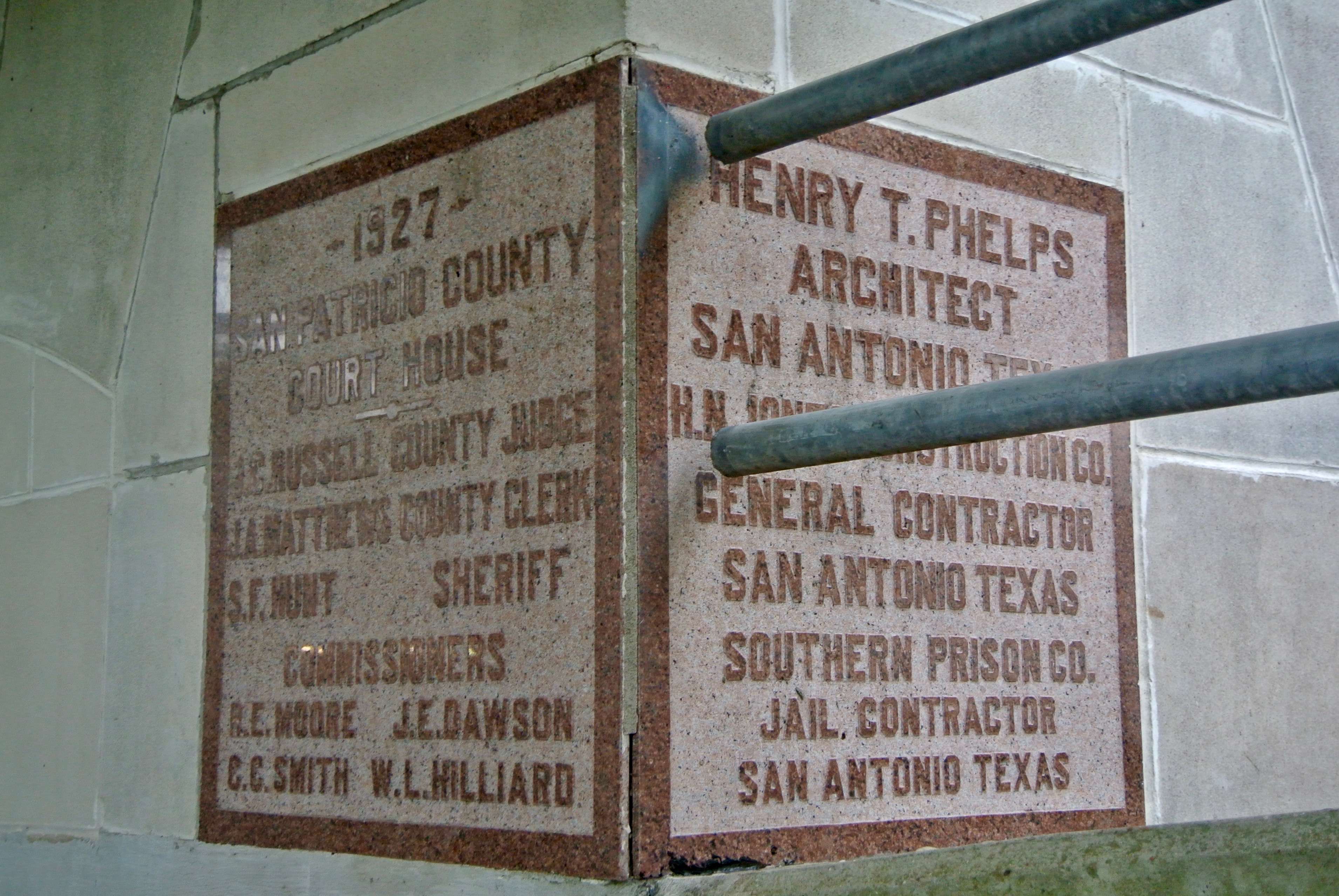 You’d think the architects of this handrail would have taken the time to think through this better. 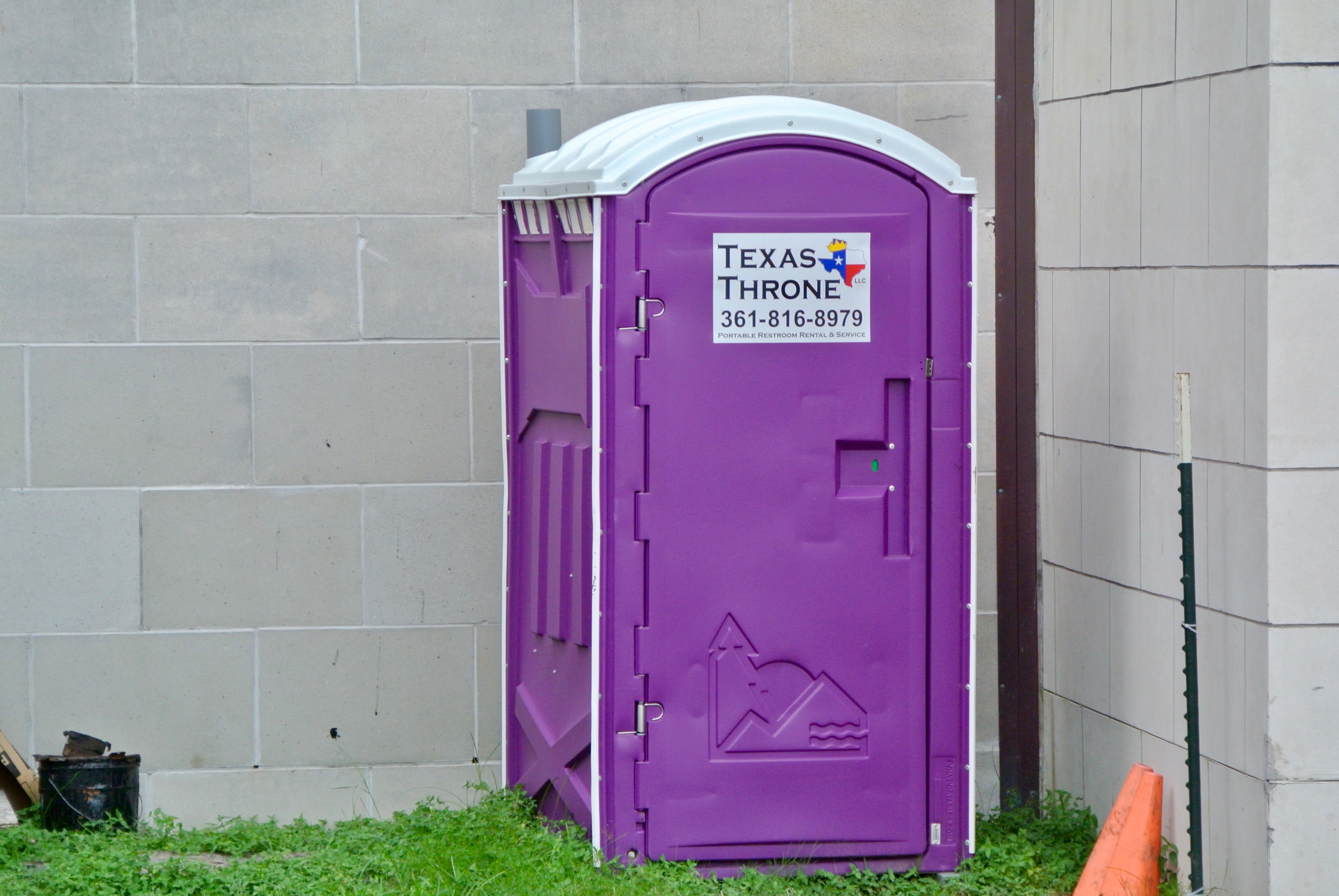 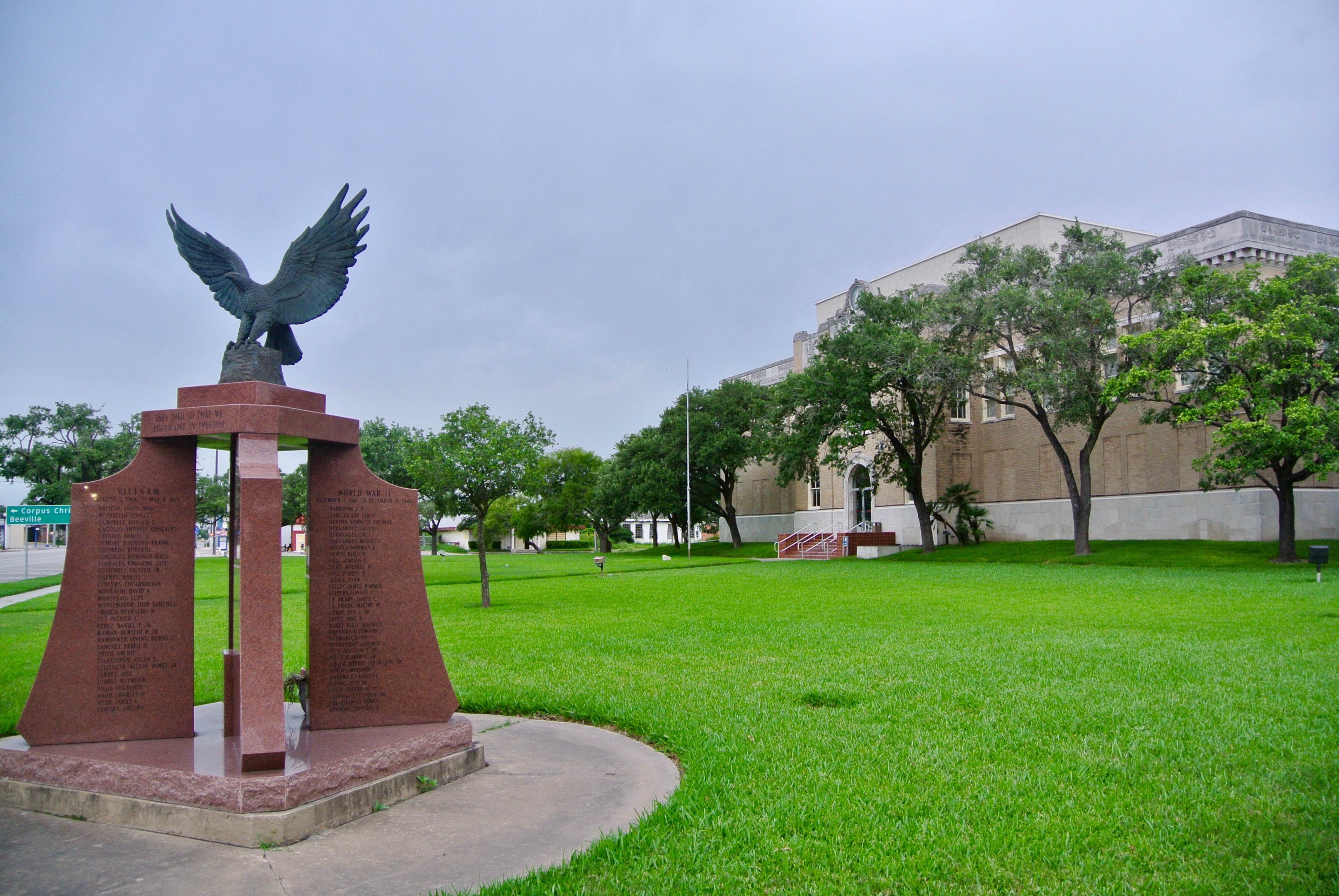 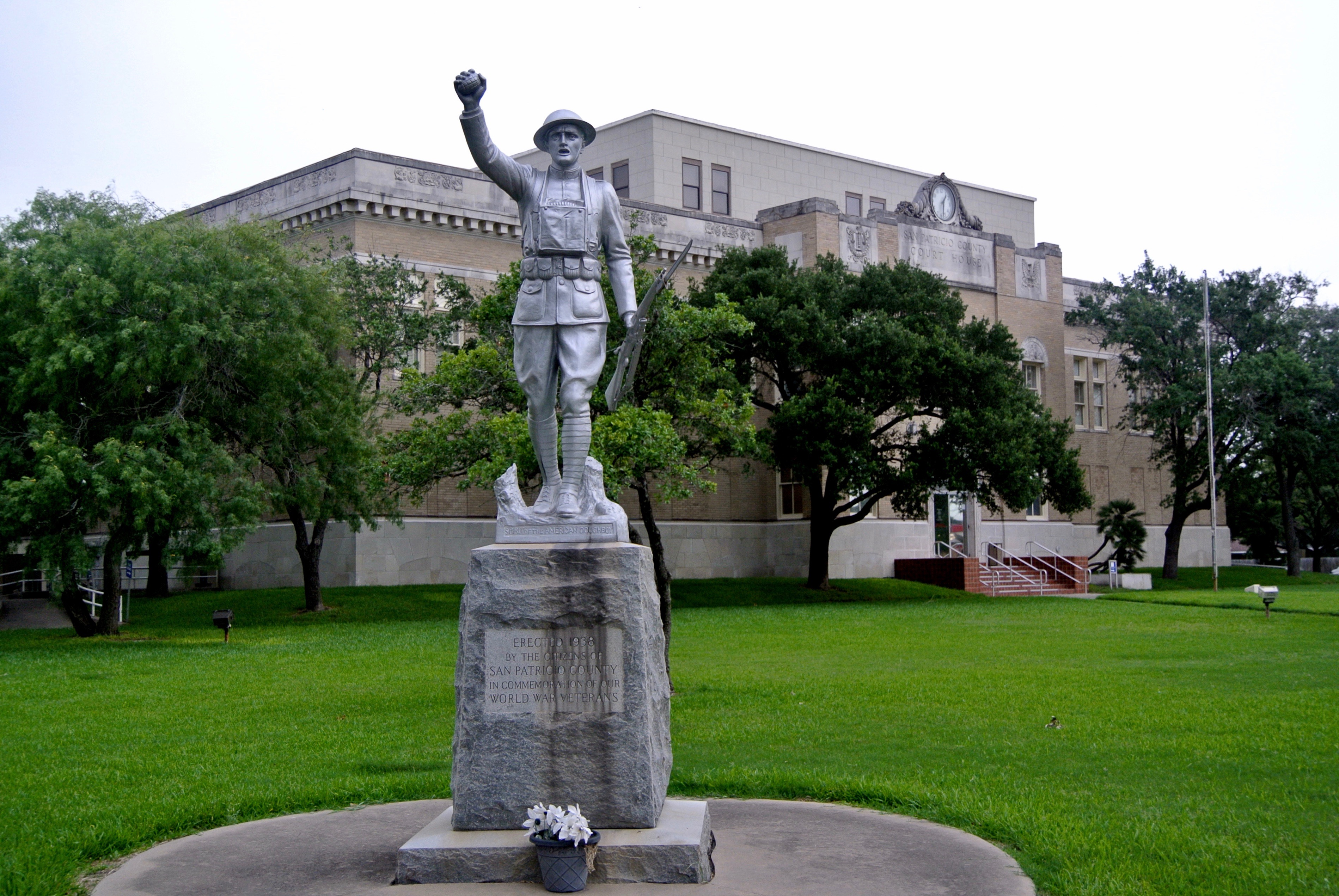 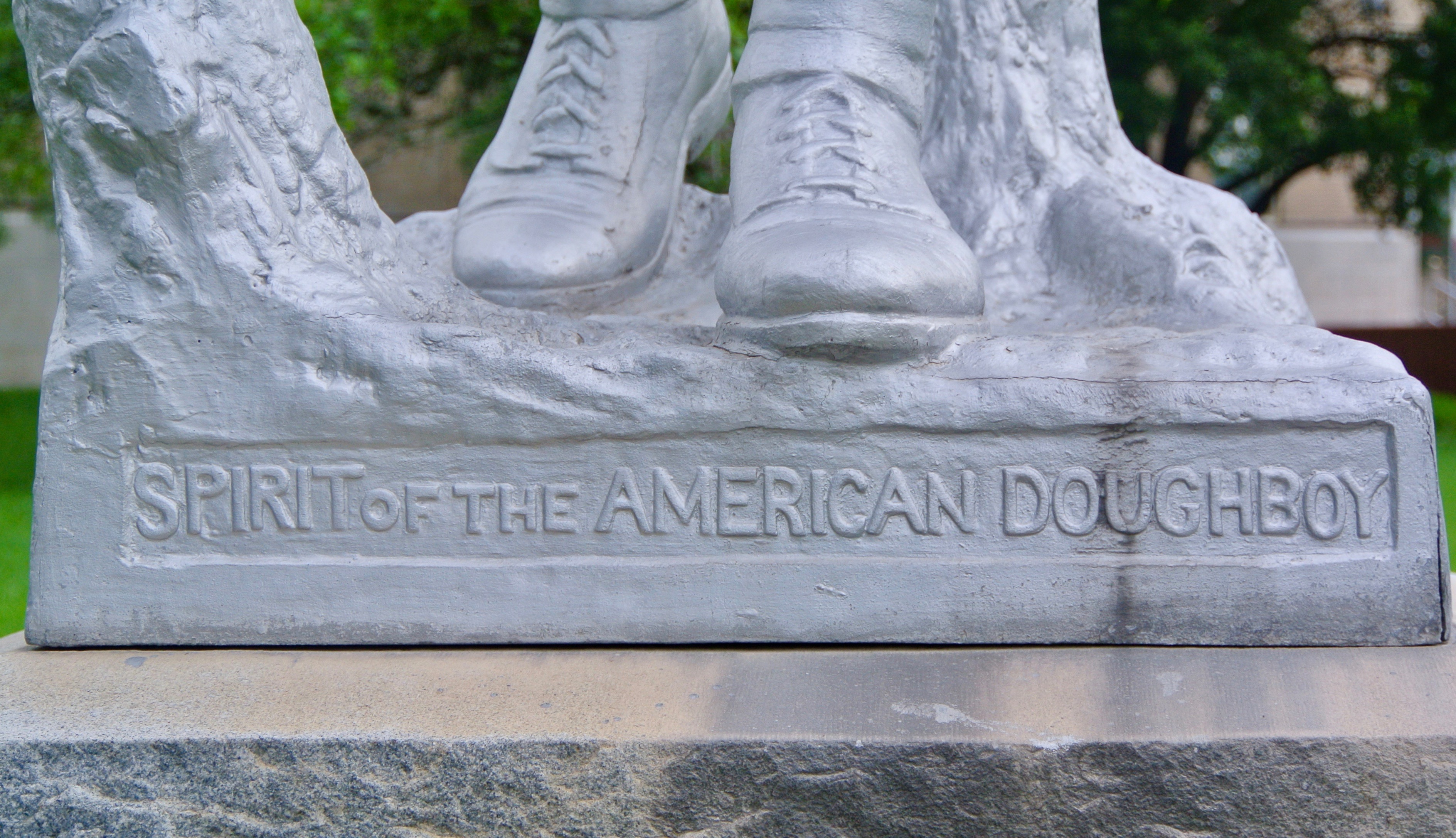 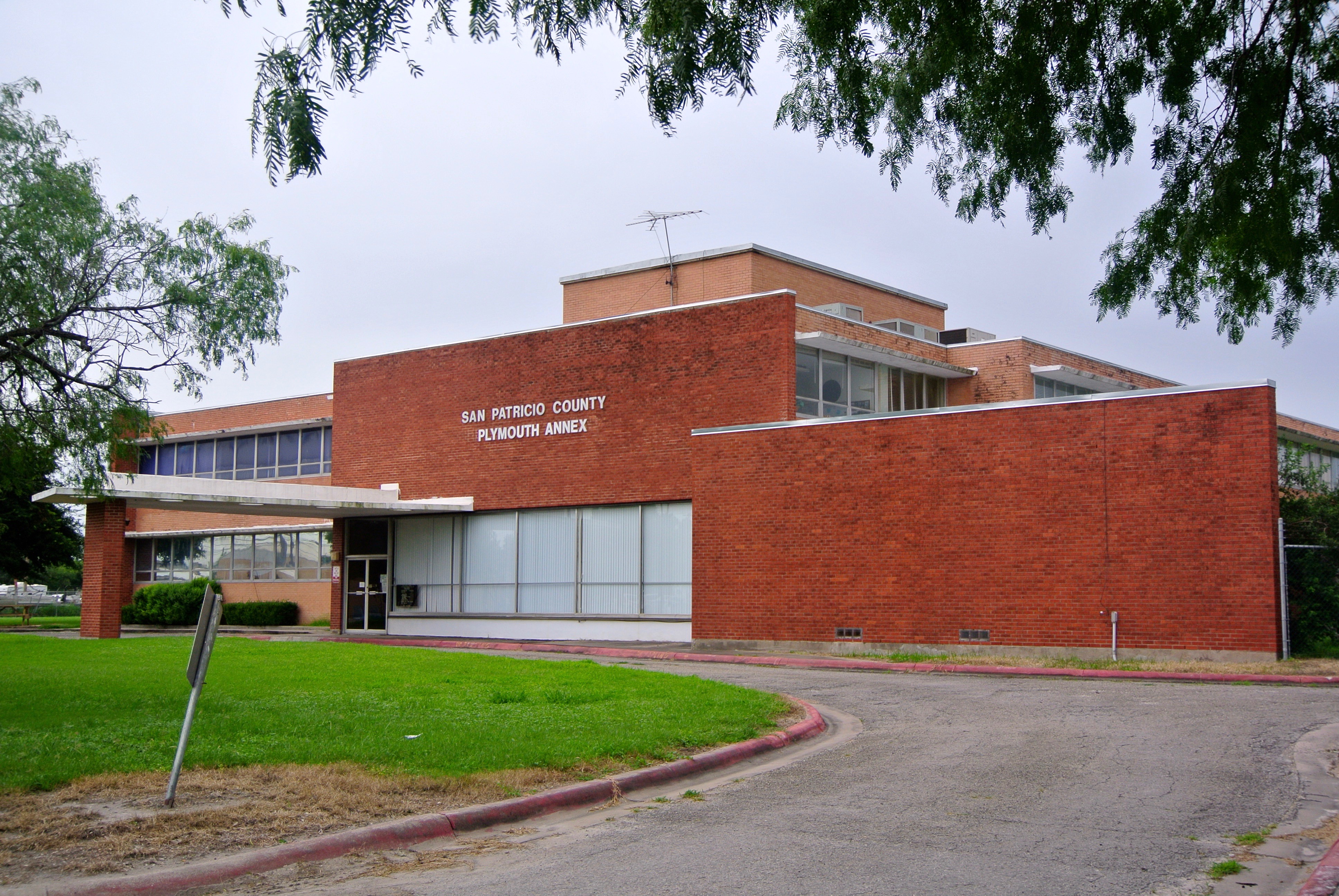 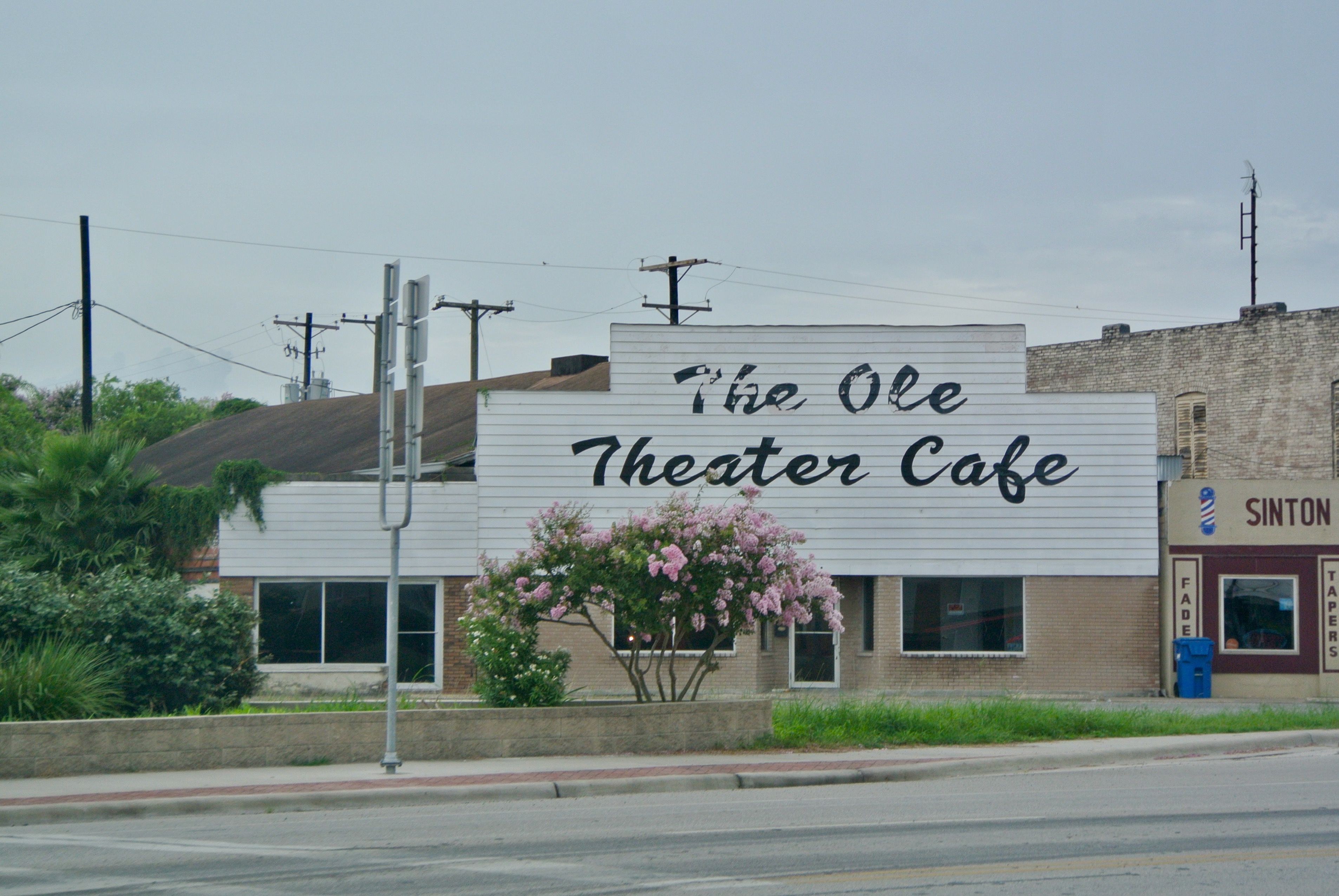 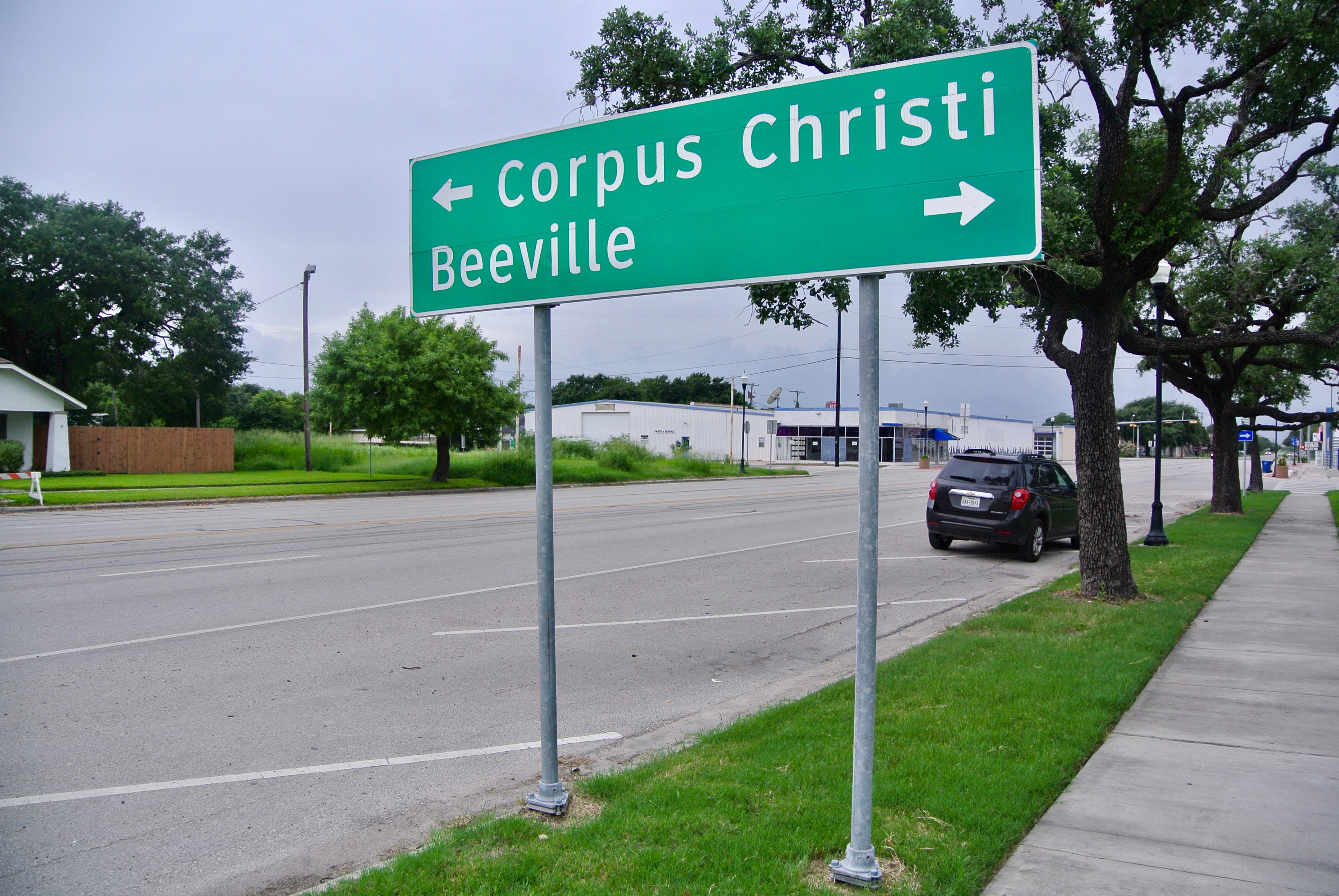 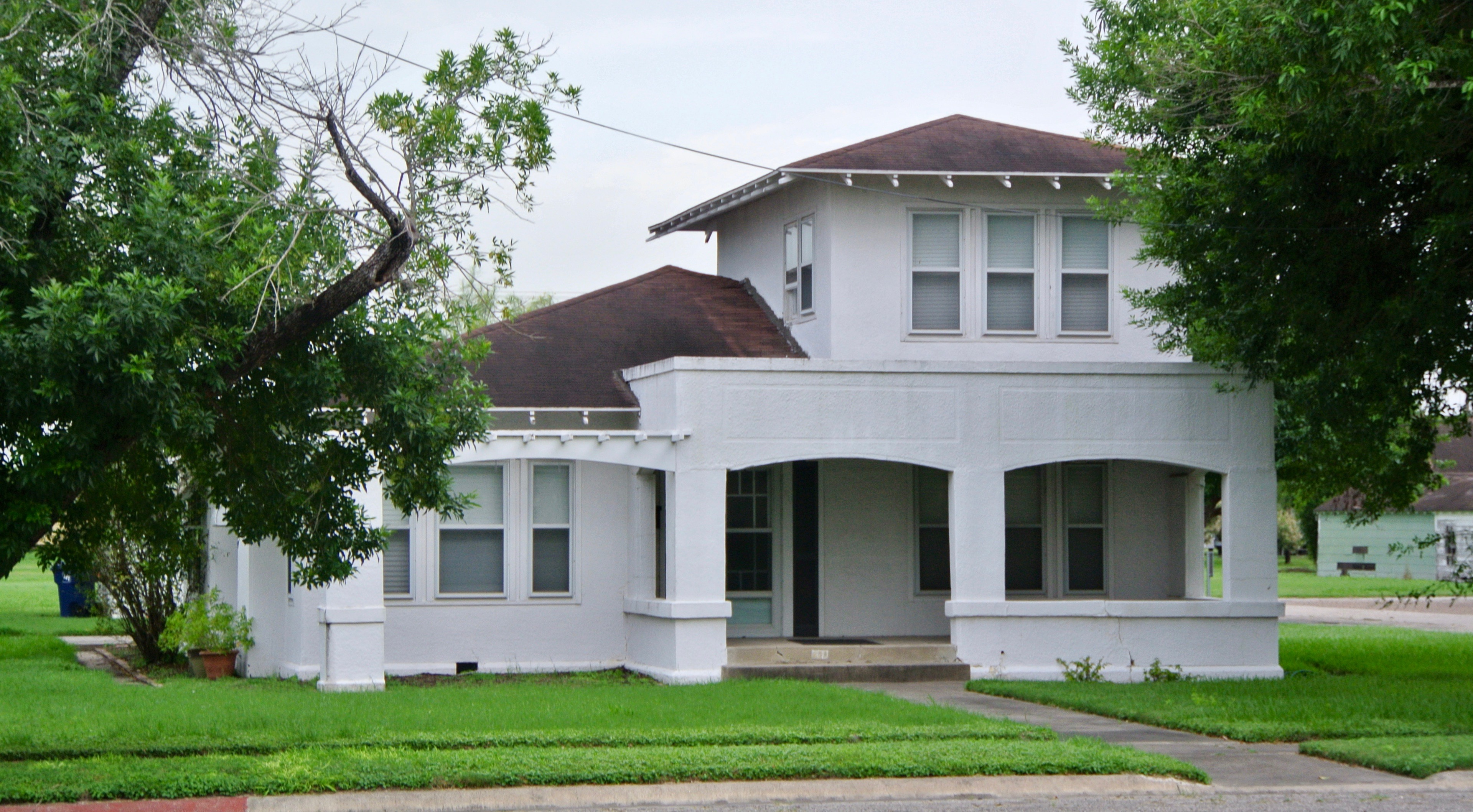 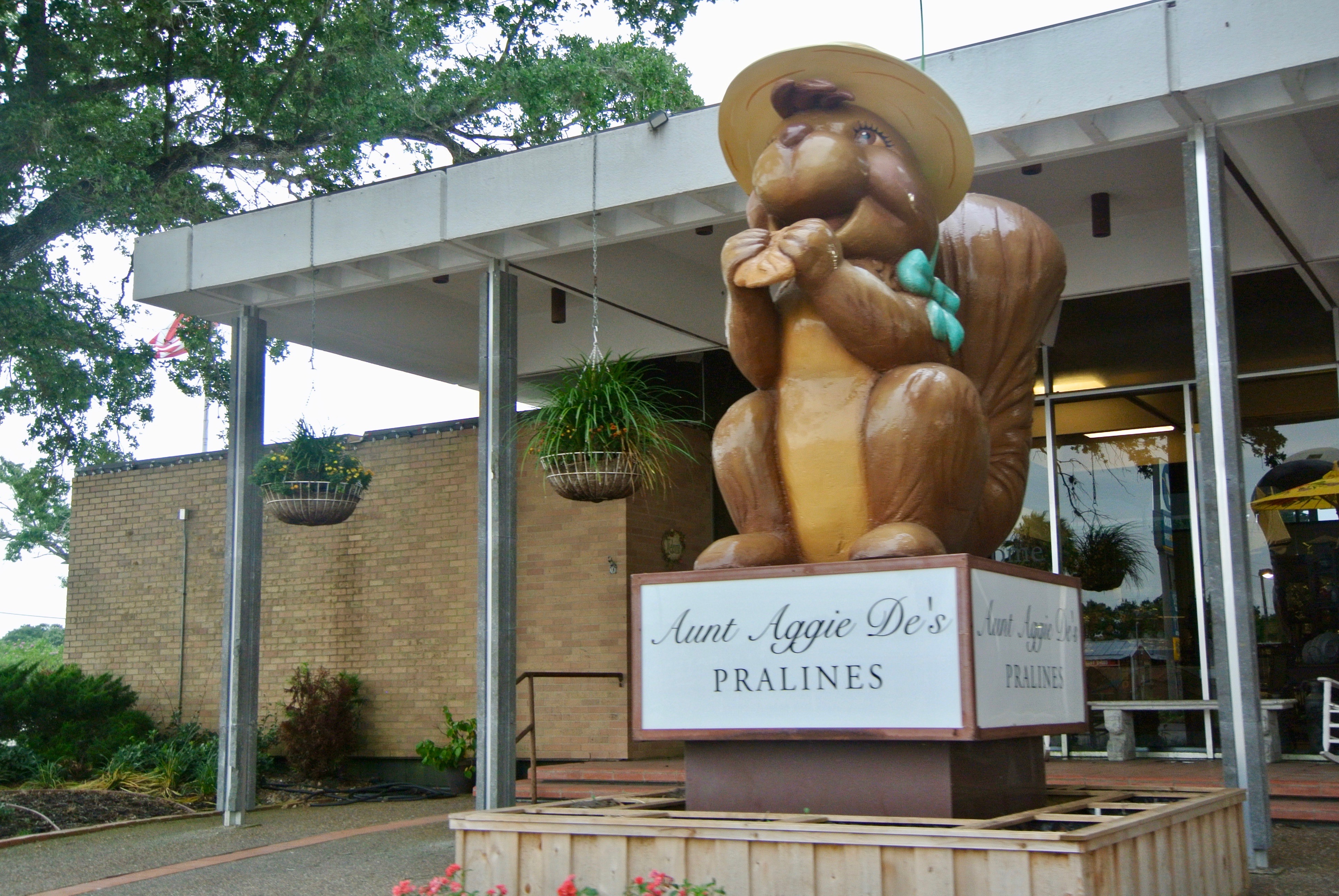 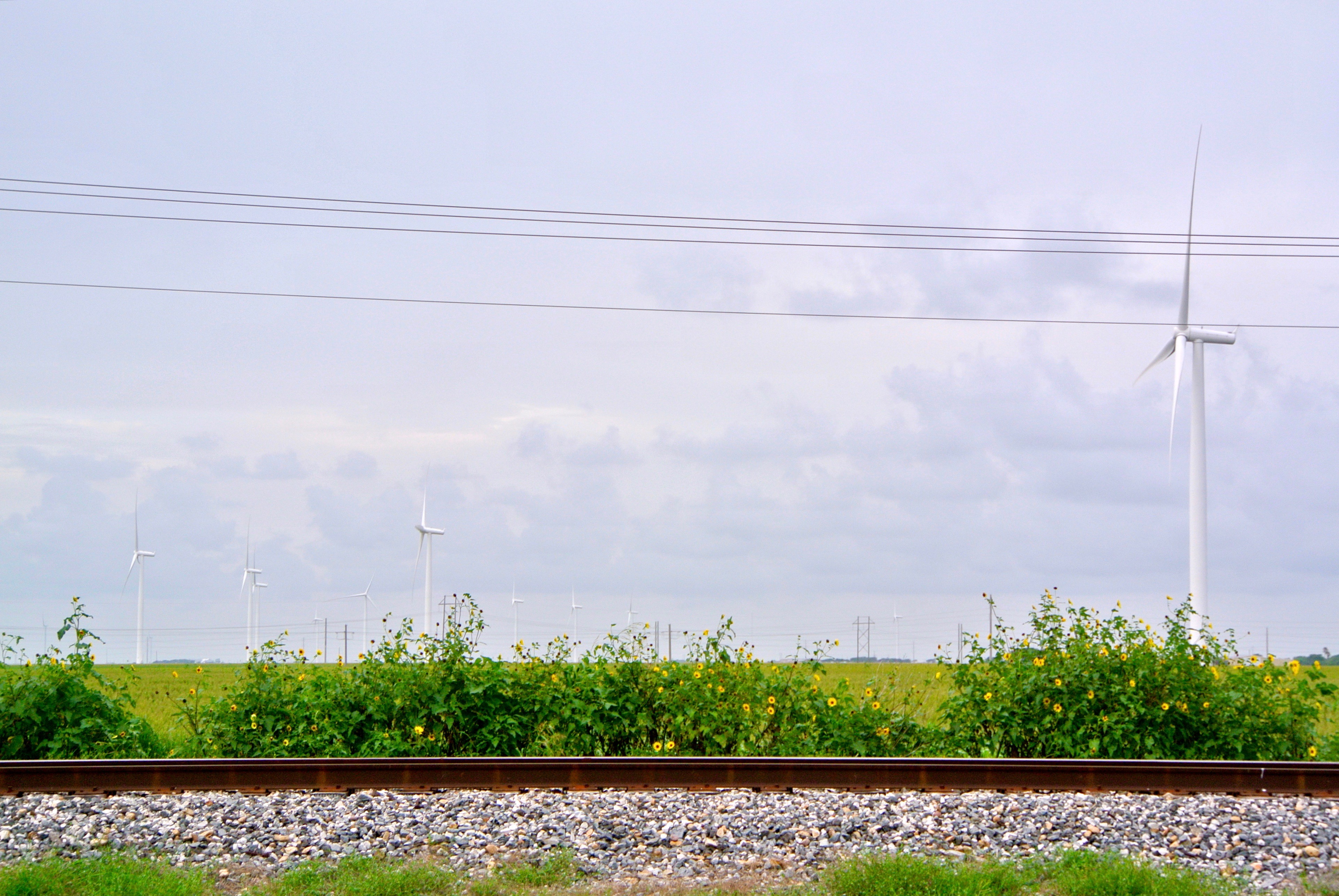 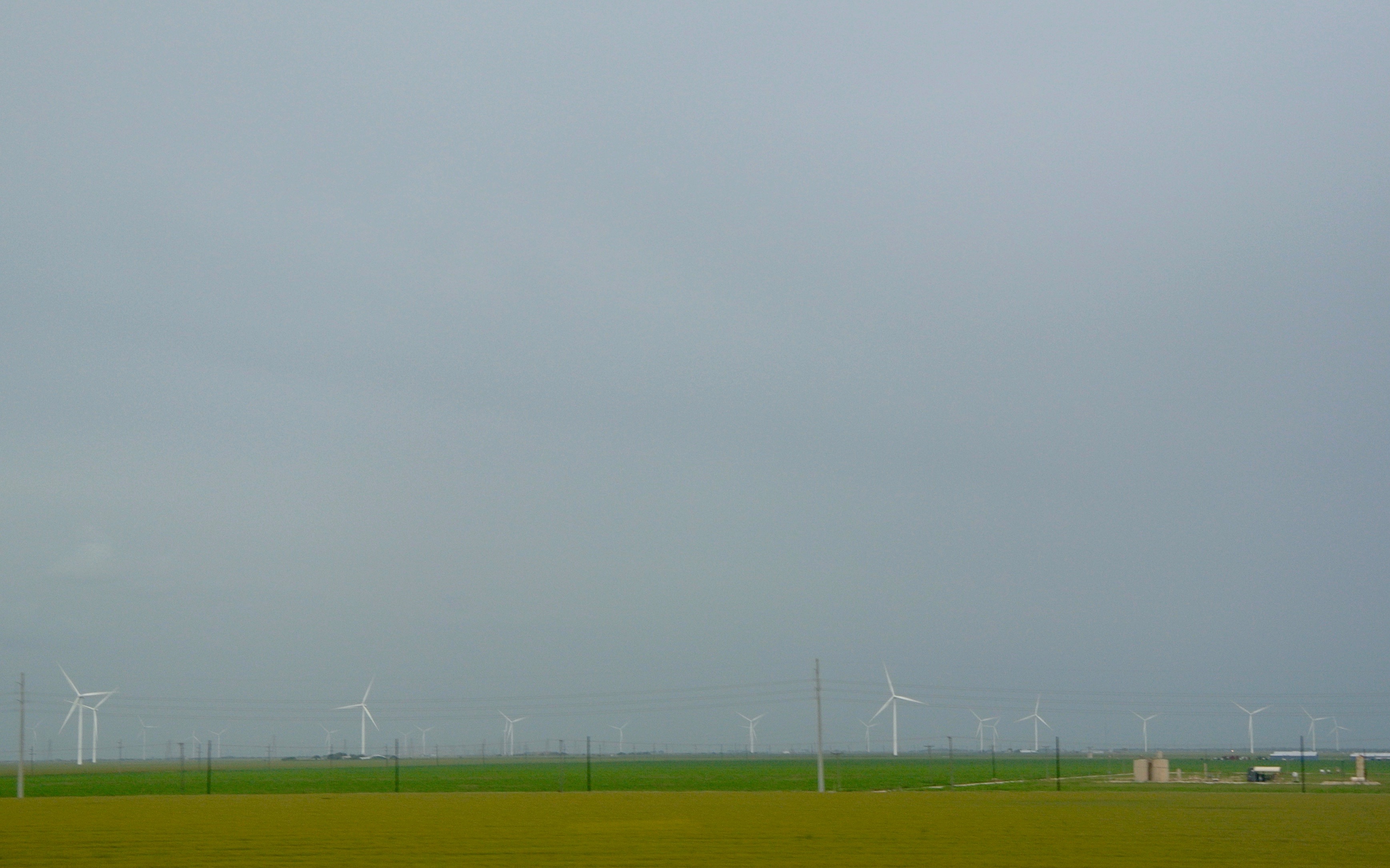