“Starr County is part of the Rio Grande Plain region and comprises 1,226 square miles with elevations from 200 to 400 feet above sea level. The northeastern part of the county has sandy or light-colored and loamy soils over very deep, reddish or mottled clayey subsoils.”

“The first settlement in the area was made in 1763 by Francisco de la Garza Martinéz, son of betway mobile casino download, who was granted porcíon 80 in 1767 by Spain. The villa was named Rancho Carnestolendas. Another early settlement was Corrales de los Saenz, founded about 1763 by the Saenz family.”

“The area was disputed after the Texas Revolution, when both Mexico and the Republic of Texas claimed it. In 1847 Henry Clay Davis established the town of Rancho Davis on the Rio Grande near the site of the former Carnestolendas Ranch. After the Treaty of Guadalupe Hidalgo ended the Mexican War in 1848, the area became part of Nueces County. Camp Ringgold, later Fort Ringgold, was established at Rancho Davis on October 26, 1848, the year the county was organized and named for James Harper Starr.”

“Rancho Davis was renamed Rio Grande City and made county seat. The introduction of steamboats on the Rio Grande in the late 1840s made trading centers of Rio Grande City and Roma. After 1849 itinerant Oblates of Mary Immaculate periodically visited the ranches between Brownsville and Laredo.” 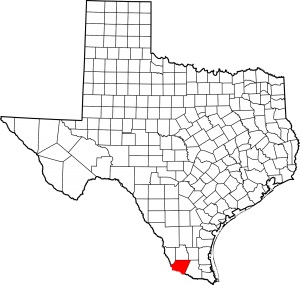 “Machine politics in Starr County came to the forefront during the 1870s and 1880s, when Manuel Guerra, rancher and merchant, asserted control of the county as political boss. Before that, county politics had been dominated by the Anglo minority of ranchers, merchants, and lawyers. Guerra’s power over the Reds, as the Democrats were called, however, was not absolute, although he did have the support of James B. Wells, the political boss of South Texas. Guerra’s biggest rivals were other Hispanics with political aspirations. Starr County, unlike other lower Rio Grande valley counties, had a proportionately high number of Mexican Americans contending for public office.”

“In 1894 Wells negotiated a truce between Manuel Guerra and Sheriff W. W. Shely, who agreed to share party patronage and party nominations; the truce allowed the Democratic party to reassert its domination over Starr County politics. Guerra was also able to gain a seat on the commissioners’ court. By the end of 1900 John R. Moore had been elected county judge by the Blues.”

“Starr County again made headlines in November 20, 1899, when black troops of the Ninth United States Cavalry stationed at Fort Ringgold fired on Rio Grande City. The attack lasted long enough for the citizenry to call for aid from the Texas Rangers. The county’s population was 11,469 in 1900.”

“Old settlers ranched along the river and in the south central part of the county, and the new farmers grouped together in the northern area of the county. The most famous of these northern settlers was Edward C. Lasater, who founded Falfurrias in the area that became Brooks County. In 1860 there had only been seventy-one farms in the county, but by 1910 there were 918. In 1900, forty-eight acres of corn and 1,615 acres of cotton were planted. By 1910 cultivation had risen to 14,339 acres of cotton and 2,825 acres of corn.”

“Brooks County was carved out of northern Starr County in 1911, after a long and bitter feud between the Lasater and Guerra factions. Lassater had agitated for the formation of a county that would free him and other farmers of machine politics. However, Brooks County cost Starr County its best farmland. In 1915 Starr County became a target of border raiders and officials requested help from the adjutant general.”

“As part of the wartime search for new sources of rubber, Starr County was chosen for a guayule experiment in 1942. This desert shrub that produces rubber was planted in the county because of its arid climate, and experiments in its cultivation continued after the war. In 1944 Fort Ringgold was permanently closed by the army, and much of the land and several buildings were acquired by the county school district.”

“Little changed for the county during the 1950s; it remained composed of a dispersed rural Hispanic population. By 1960 Starr County had an estimated population of 17,137.”

“In March 1985, 50 percent of the population received food stamps. The extreme poverty was attributed to the lack of jobs in the economically depressed oil industry as well as unemployment in other states, which displaced migrant farmworkers. In 1986 Starr County was one of the poorest counties in the nation.”

“In 1993 Starr County was the nation’s second poorest county, with 60 percent of its population living below the poverty rate; it also ranked first in percentage of persons of Spanish origin and forty-first in the highest birthrate.”

“The Starr County Courthouse was constructed in 1856. It was originally designed as the Mifflin Kenedy Warehouse and was used by Kenedy for his steamboat trading business. In 1865, the former warehouse was designated as the first courthouse of Starr County. The two-story building is constructed of brick that has been painted a pale shade of green. The structure is surmounted by a hip roof. A wooden balcony extends along the entire length of the front facade. An exterior stair provides access to the second story. The building was used as a courthouse until 1885, when a new courthouse was constructed. The former courthouse served as the county’s first school from 1885-1915. After 1915, the county used the building for various purposes, including a jail; this required extensive remodeling on the first floor. Rio Grande City recently purchased the building from the county and is restoring it for use as offices and a museum. The Mifflin Kenedy Warehouse is one of the oldest extant buildings in Texas that once served as a courthouse” - Texas Historical Commission

I wish I’d known about this building when I visited Rio Grande City. 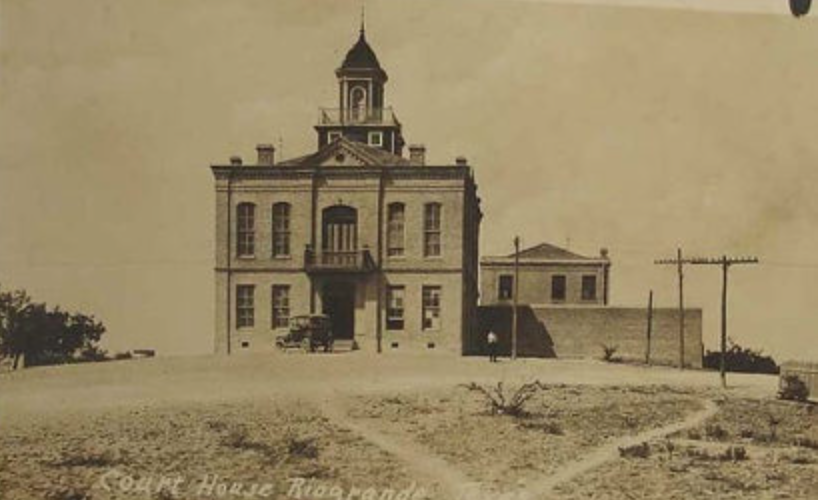 This courthouse and jail are almost identical copies of those that were built in Hidalgo County during the same year. There is no architectural listing for this courthouse, however we can assume the architect was an S.W. Brooks, as he designed its sister building just one county over. Unfortunately, this courthouse was demolished in the late 30s to make way for the current one. 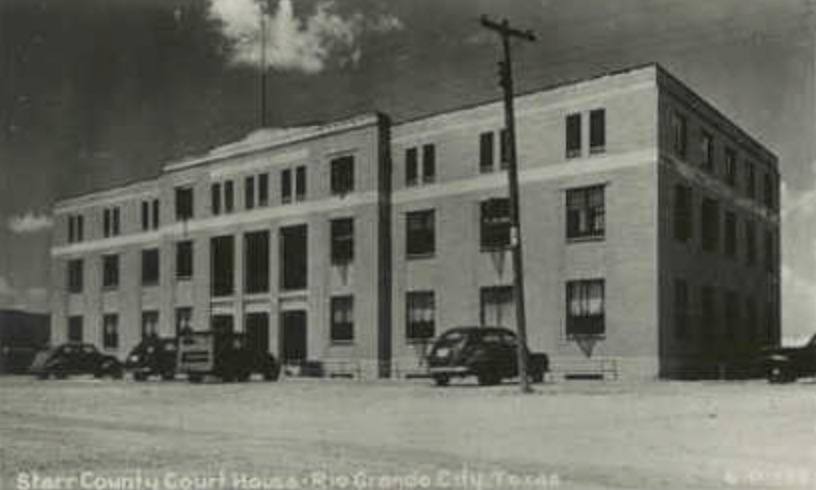 This modern creation followed the architectural plans of a Mr. Stanley Bliss. Contractors were provided by the Works Progress Administration, but the team was headed by H.H. Moeller.

The team of architect Gene Hobart and contractor F.H. Hernandez worked to renovate this courthouse in 1975. From my observations while in Rio Grande City, I’ve determined that it’s time for another renovation. 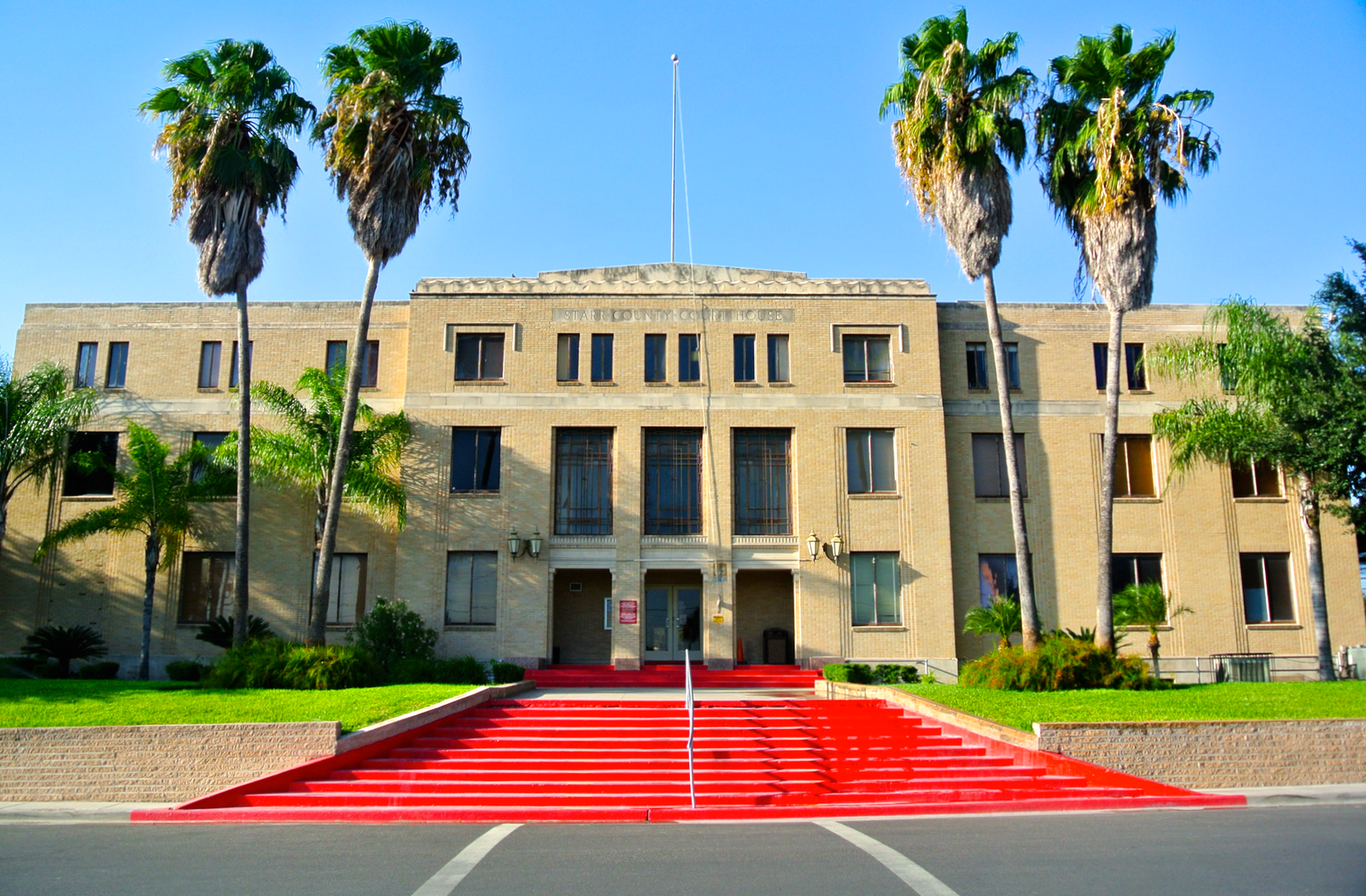 The courthouse with its signature, vibrant red steps, faces southwest towards the intersection of Britton Avenue and 4th Street. 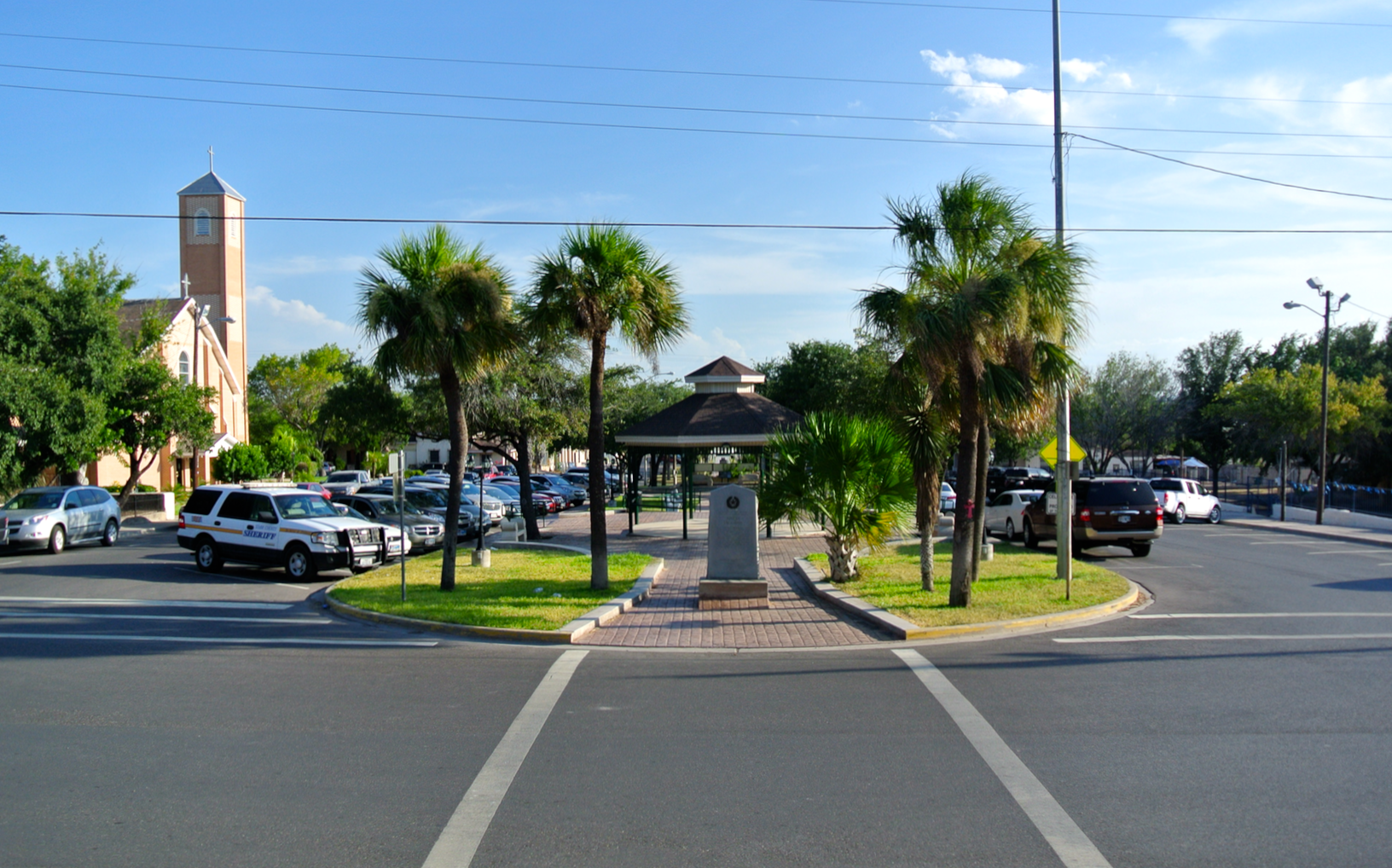 Here’s the view of Britton Street (on either side of the median), 4th Street, and Rio Grande City’s Immaculate Conception Church there on the left, as seen from the main entrance. 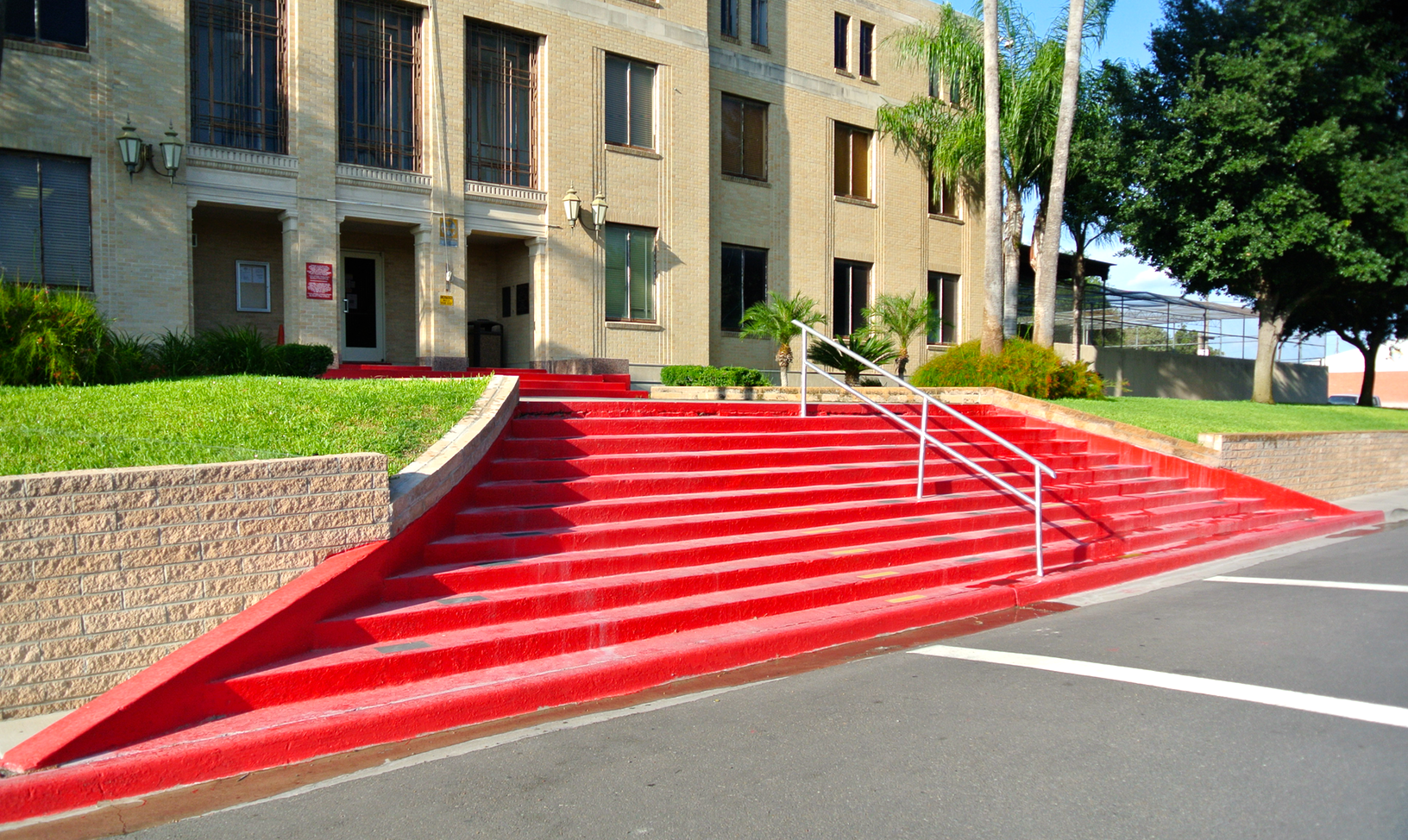 There’s no getting around those stairs. 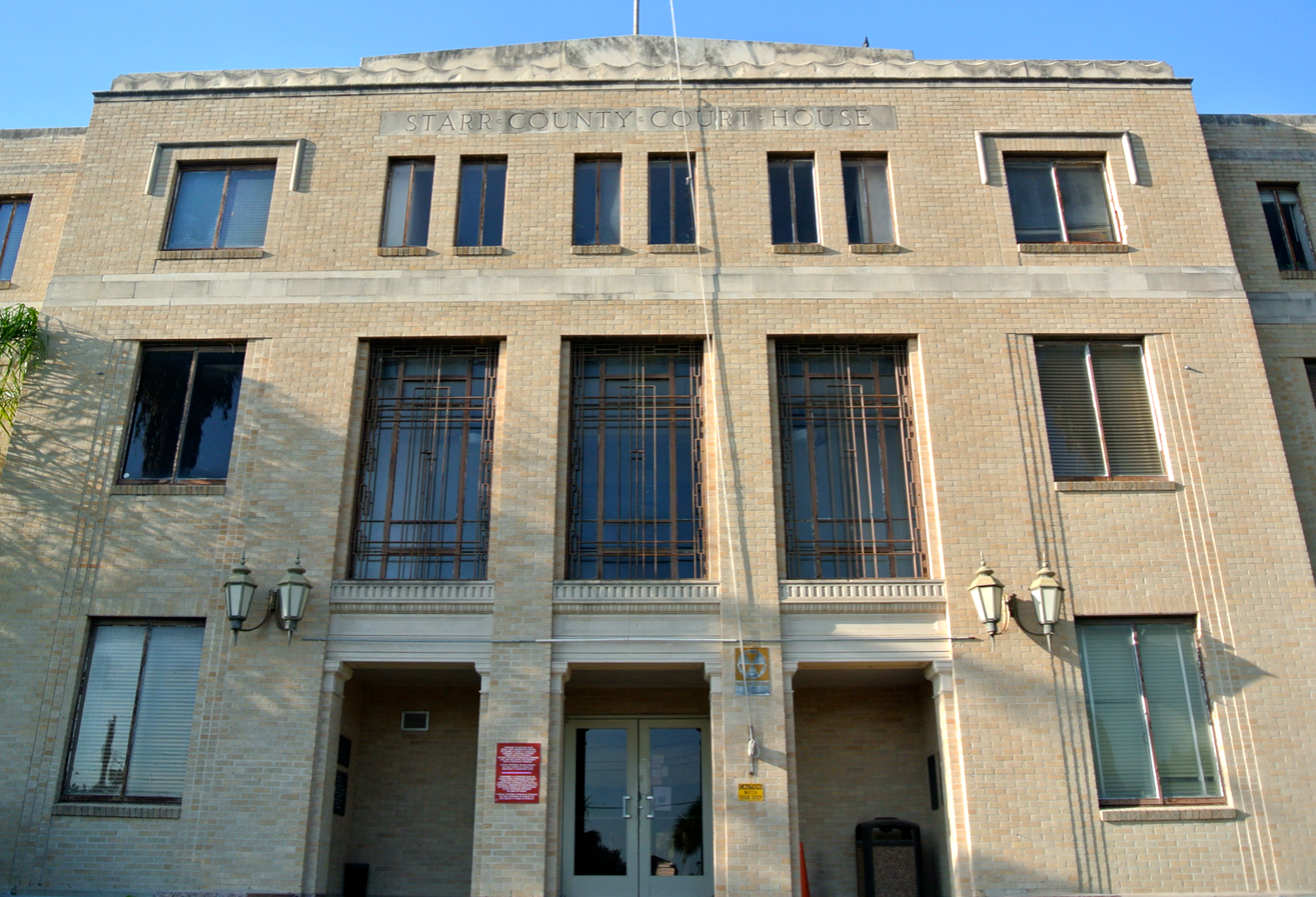 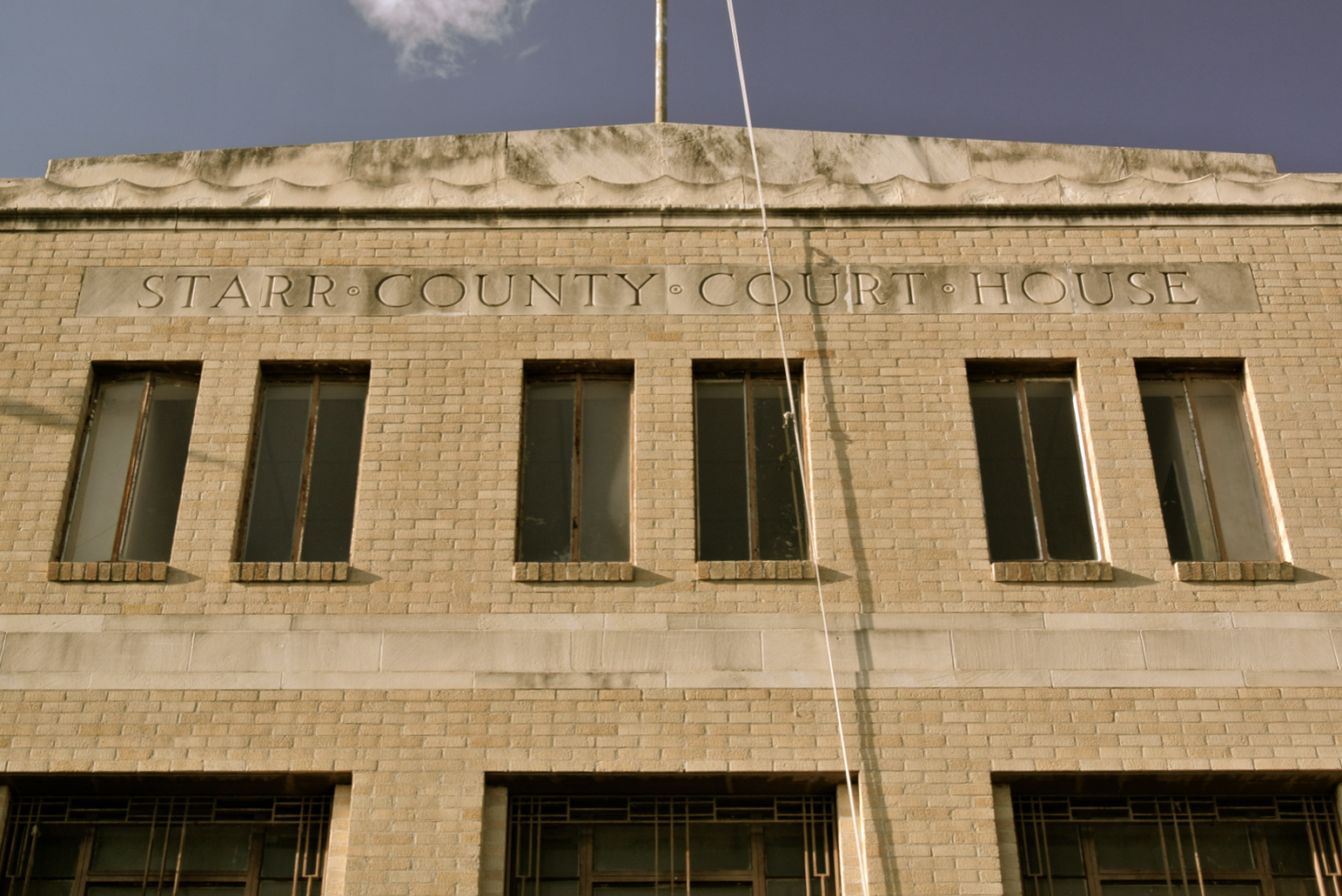 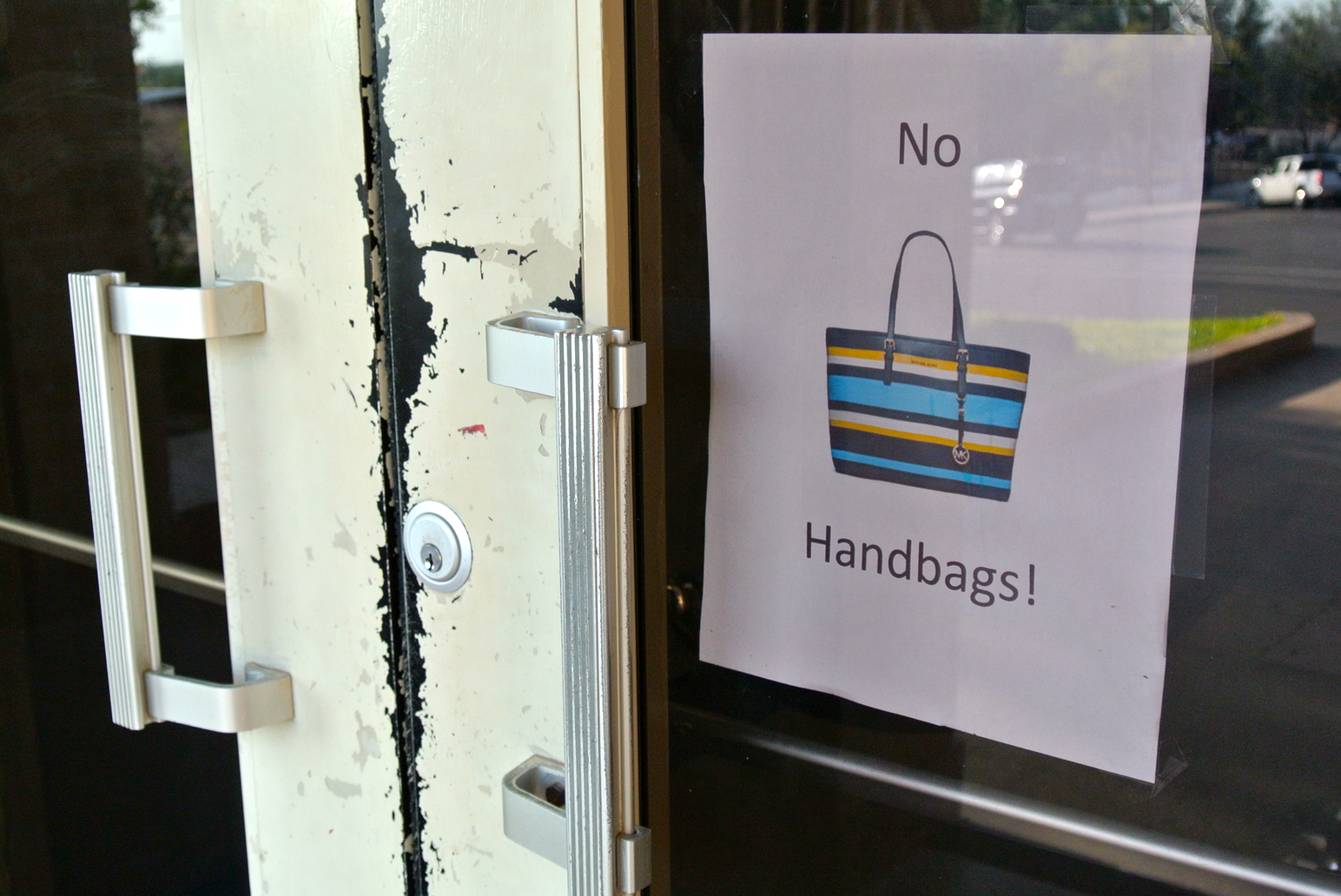 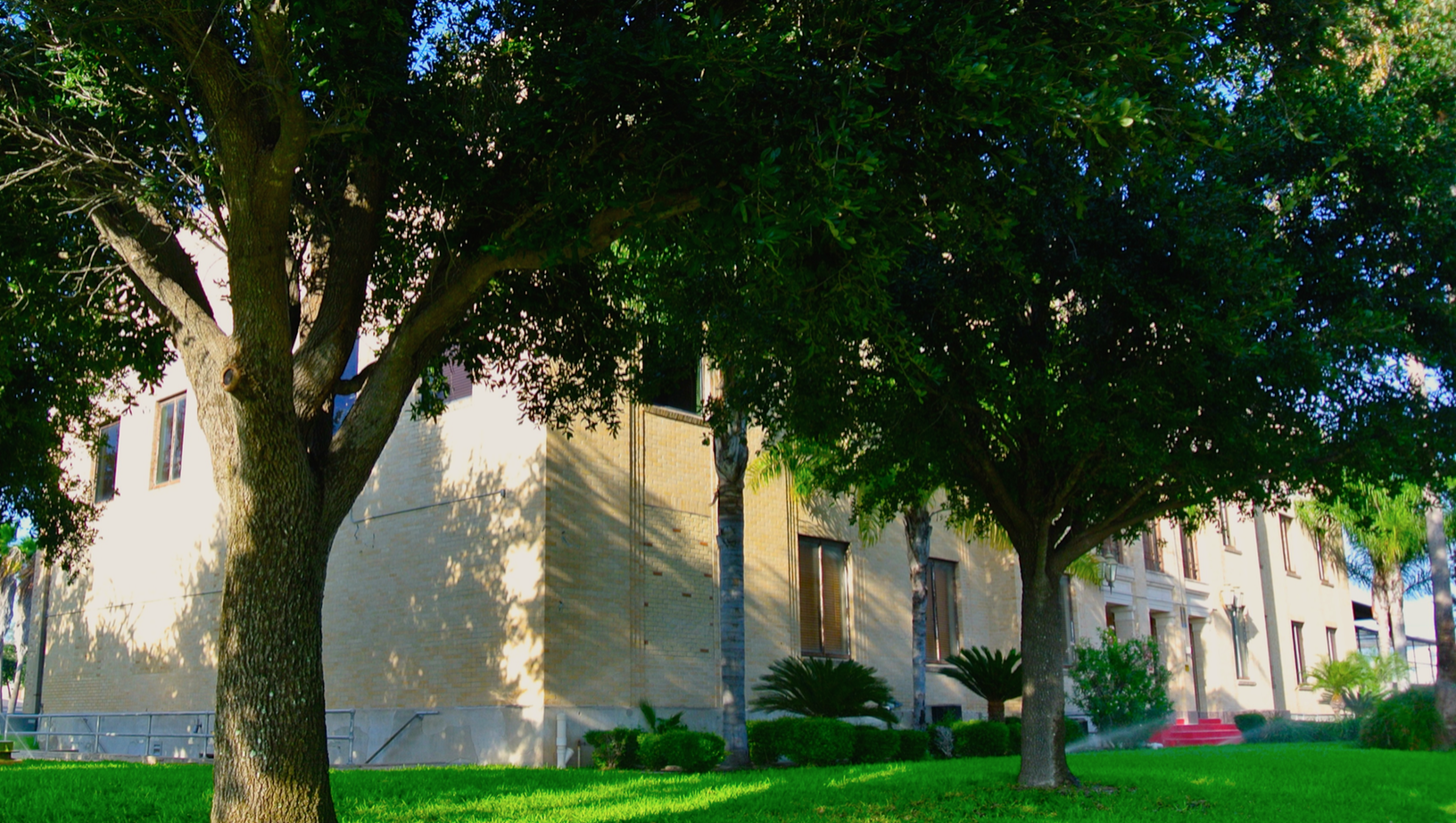 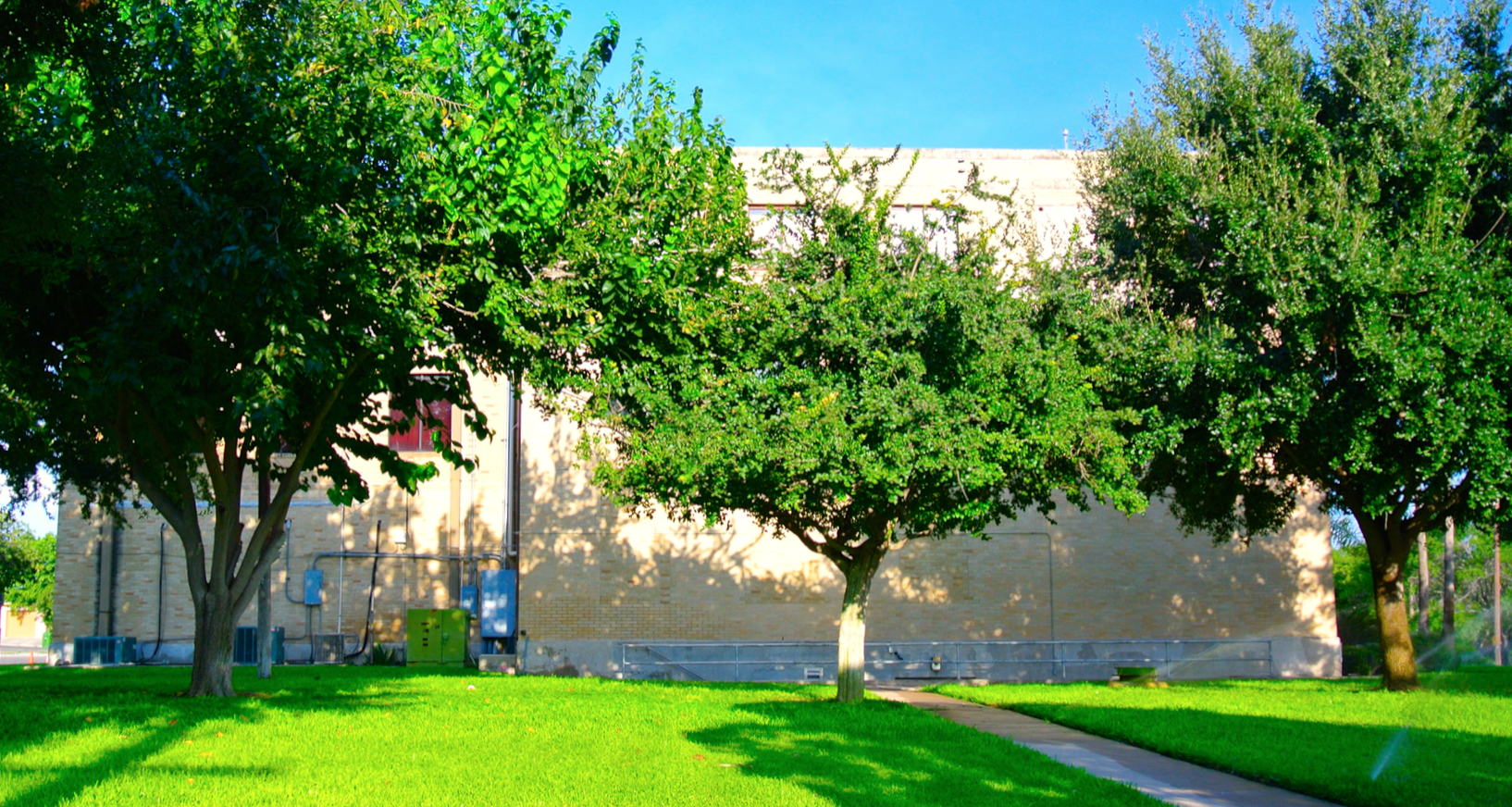 I had to navigate around late afternoon lawn sprinklers while trying to get a shot of the western façade. 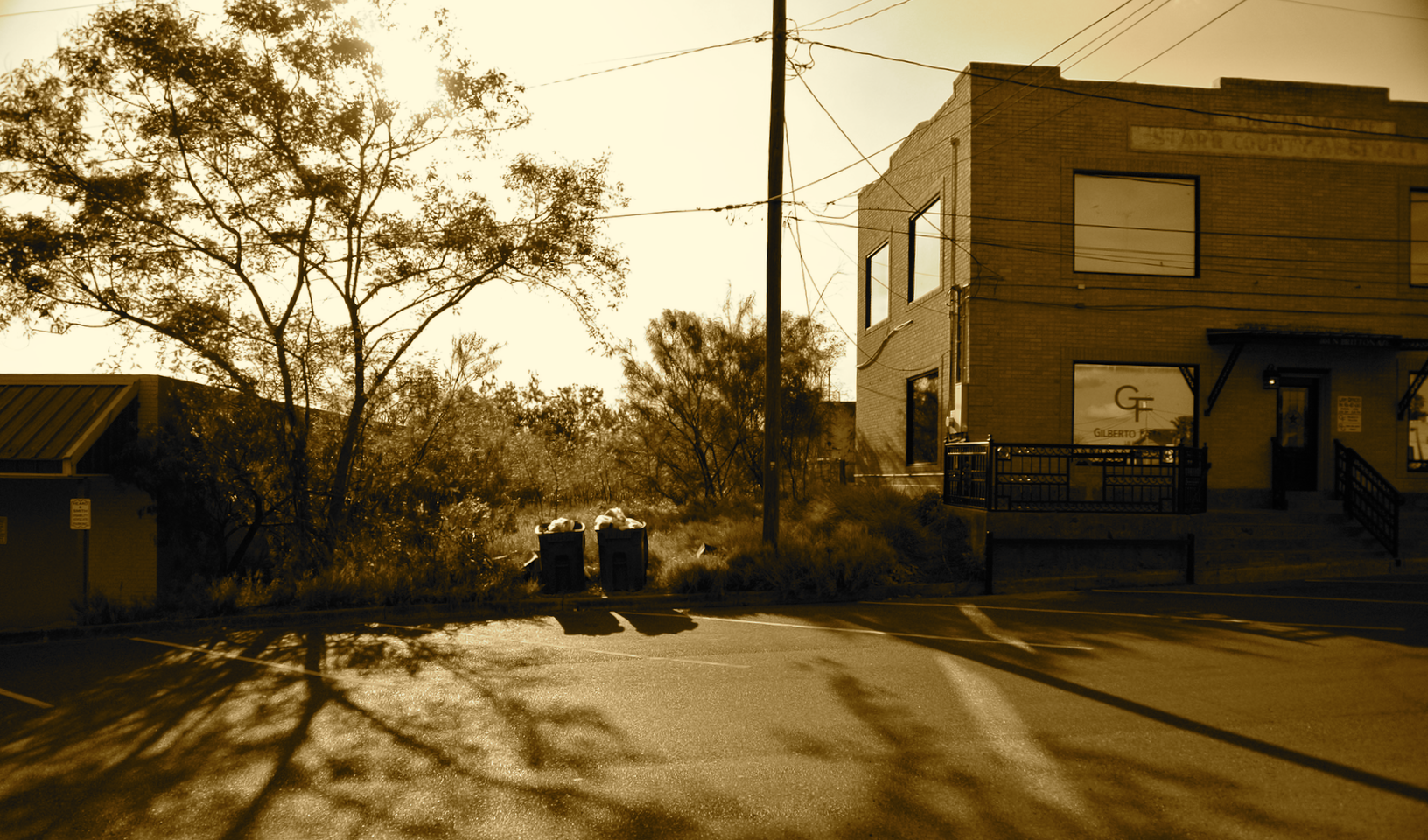 This view comes from the western side of the building. You can see the descending sun through that tree. 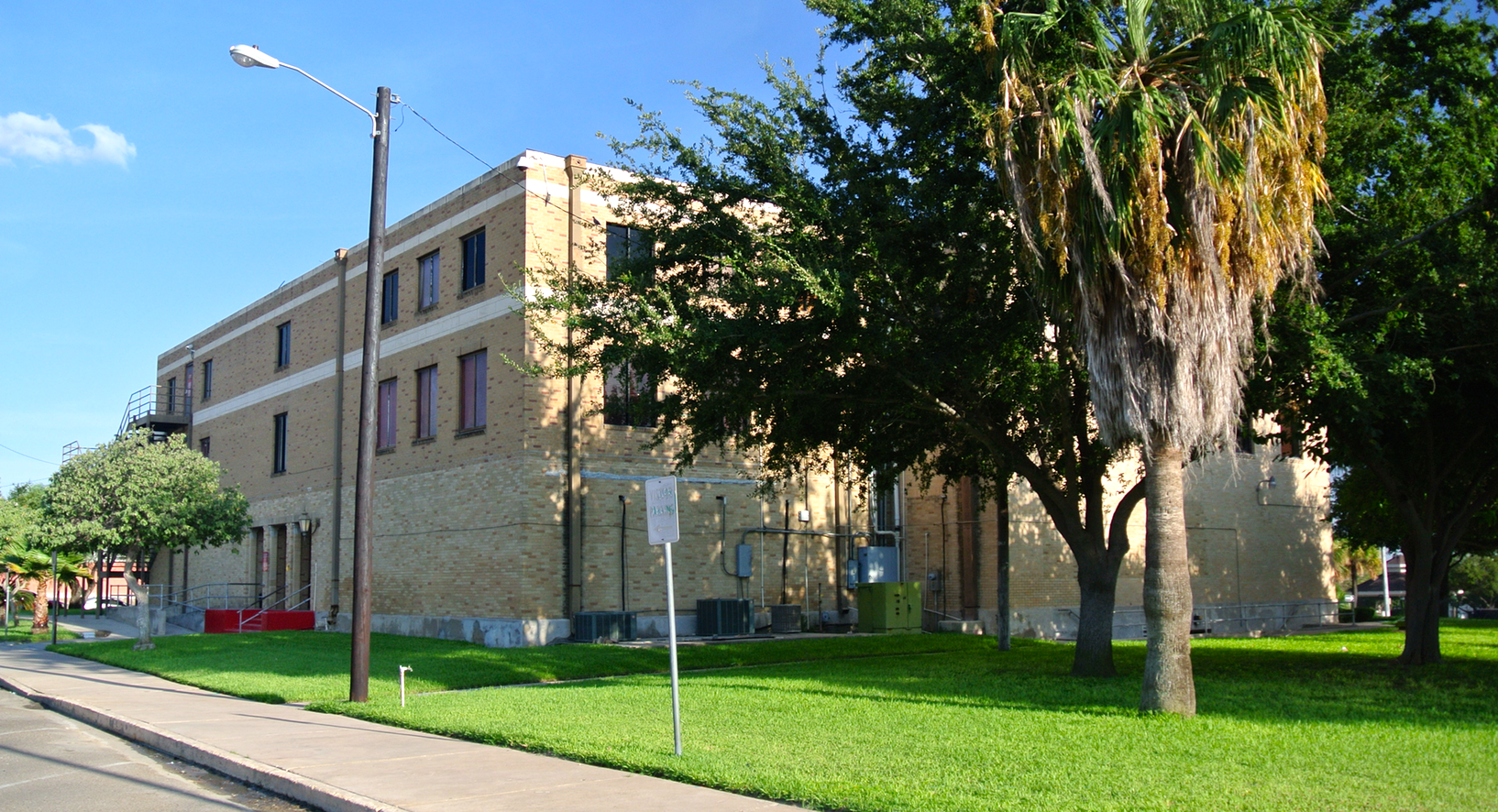 The northern façade doesn’t really look like it dates from 1939. I suppose this part of the courthouse is from the 1975 renovation. 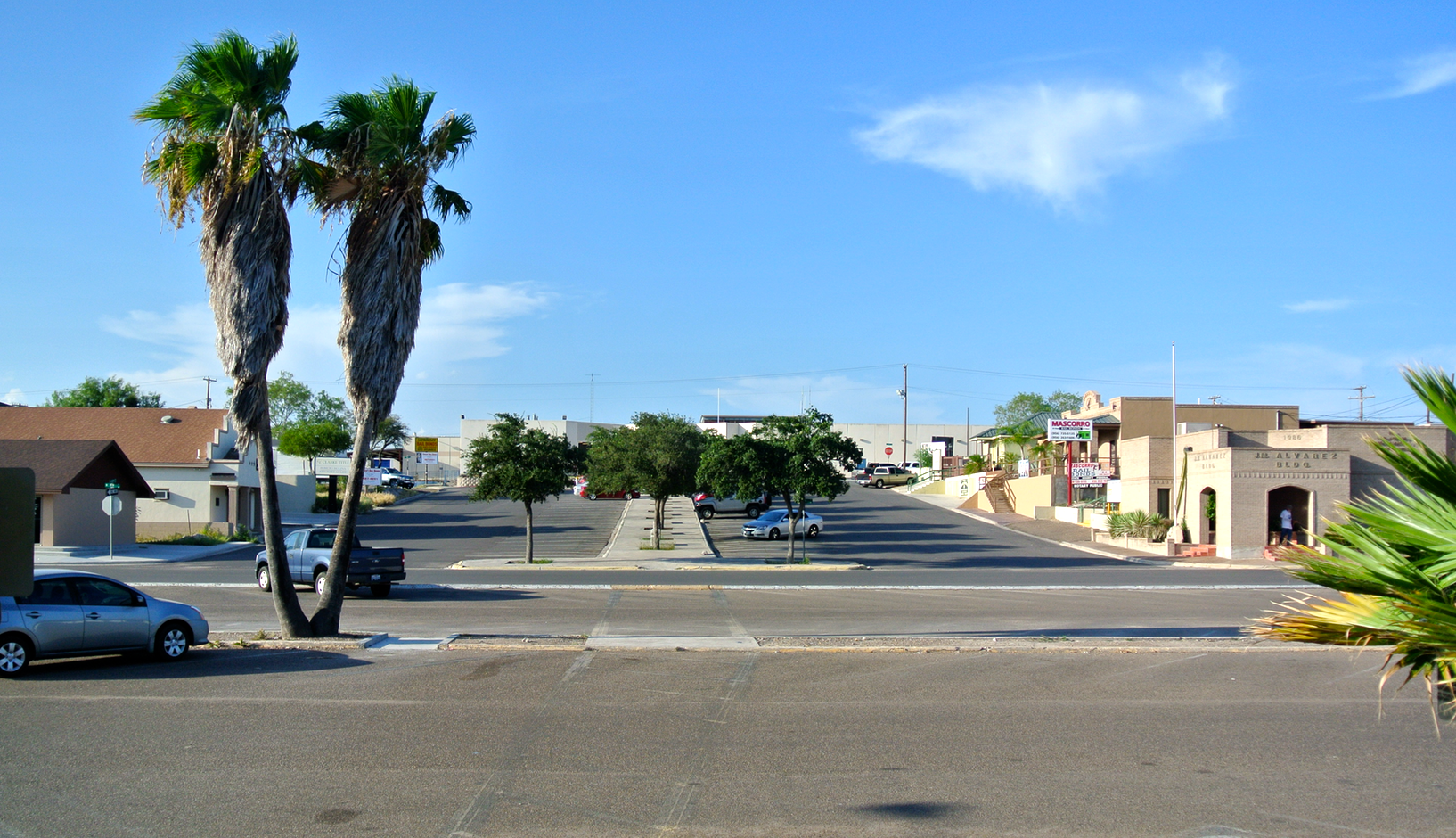 A concrete sea of parking lot and Britton Avenue stretches away from that entrance. 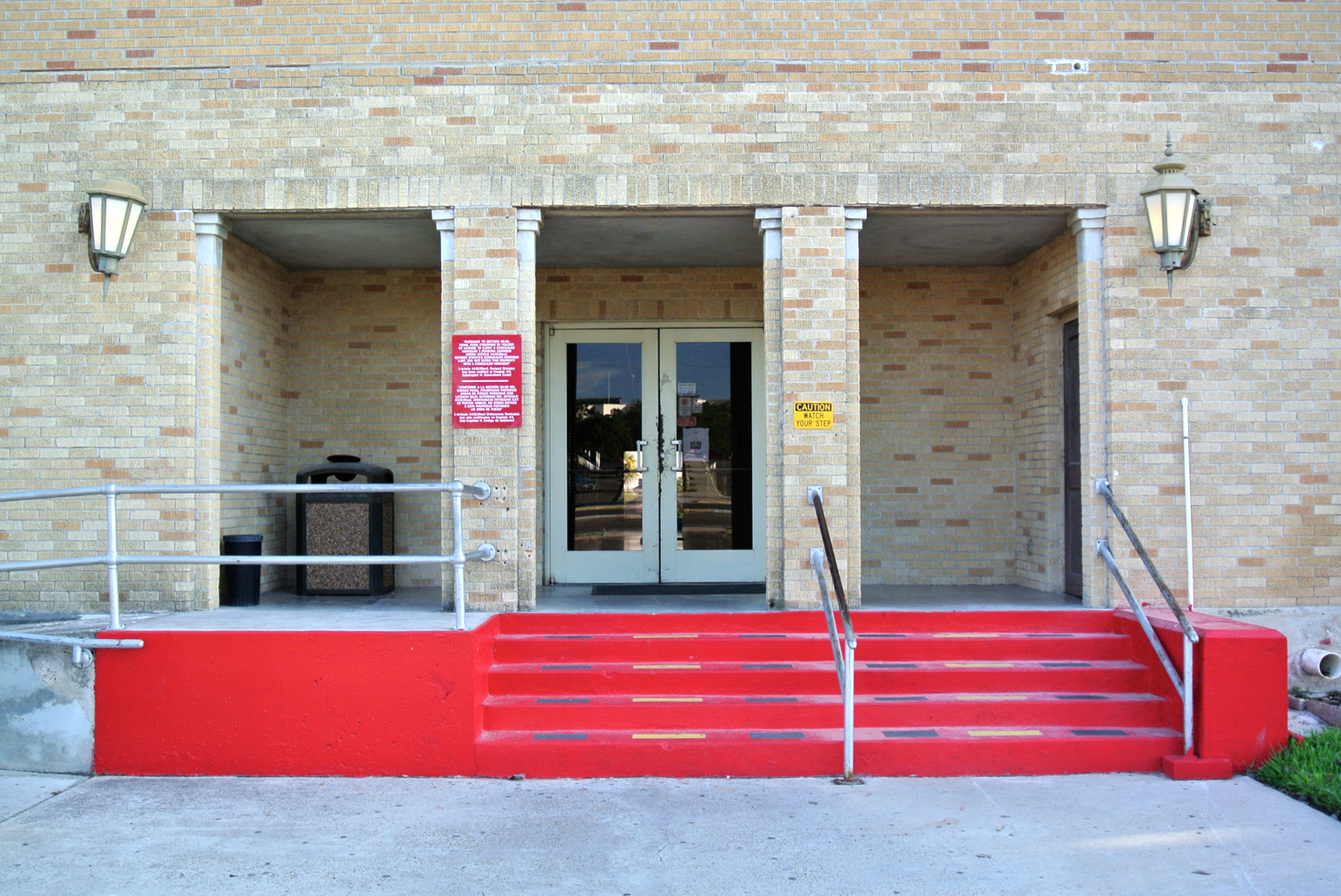 Like I said, you just can’t escape that red.

Roma is the nearest settlement to the bend in the Rio Grande that changes its course from south to east towards the Gulf of Mexico. It was once an inland port, and as such, is registered as a national historic landmark. It’s situated across the river from Ciudad Miguel Alemán, Tamaulipas, in western Starr County. 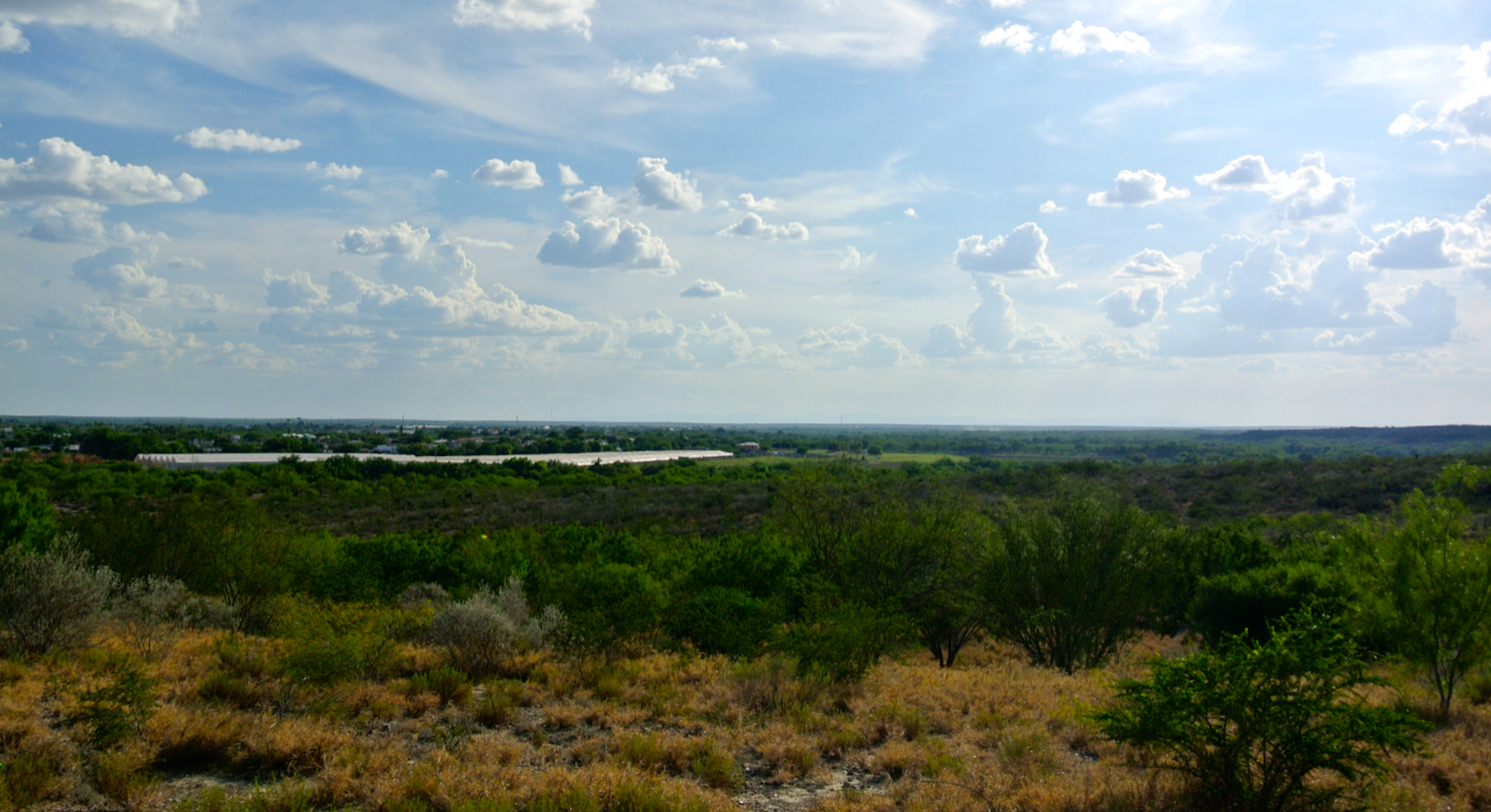 Ciudad Miguel Alemán, as seen from a bluff in Roma 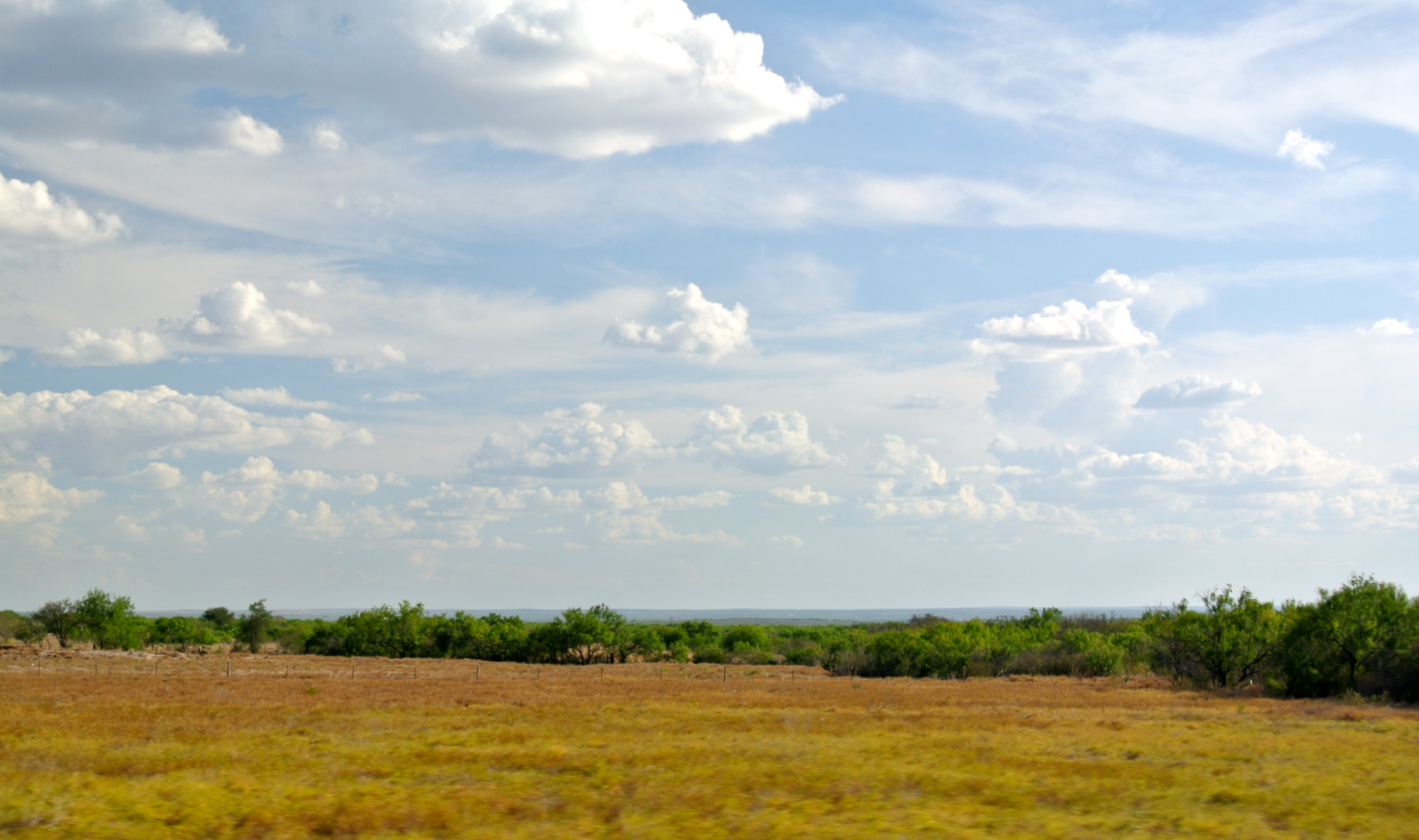 Tamaulipas, Mexico. Ciudad Mier is located among those plains.

In Rio Grande City. A little research found that this large rock sculpture is a replica of the Grotto of Lourdes, owned by the city’s Immaculate Conception Church.

I passed many of these on Highway 83. They’re called “aerostats” and are commonly used by Border Patrol for surveillance.

There’s one in flight!