“The area was named for http://254texascourthouses.com/luxor-hotel-and-casino/, an early settler on the north Texas frontier. Throckmorton County encompasses 915 square miles of rolling country with red to black soils drained by the Clear Fork and Salt Fork of the Brazos River; elevations range between 1,200 to 1,800 feet above sea level. Hills are prominent in the southwestern sections.”

“The county is in the Rolling Plains vegetation region and is covered by bluestem, gramas, wildryes, and wheat grass, along with some mesquite trees. Annual rainfall averages twenty-six inches.”

“The area that is now Throckmorton County was a part of Red River Municipality until 1837, when it became part of [n]ewly organized Fannin County. In 1854 the Comanche Indian Reservation, (18,576 acres), was established at Camp Cooper on the Clear Fork of the Brazos. In 1855 some 450 Comanches of the Penateka band settled there and tried to adapt to an agricultural economy.”

“John R. Baylor, Indian agent from 1855 to 1857, settled his family at Camp Cooper in 1856. That same year Lt. Newton C. Givens built a stone ranch house near the old California Trail and the Haskell county line. At the time this was the last house between Texas and New Mexico settlements. The Butterfield Overland Mail route crossed the area, and Franz Station was a well-known stop.”

“The Texas legislature established Throckmorton County in 1858, and Williamsburg initially was chosen to be the county seat. In 1859 the Comanche reservation was relocated to Indian Territory, and by 1860 the United States census found only 124 people living in the county. The outbreak of the Civil War also impeded settlement of the area, and the county remained unorganized for almost twenty years after it was formed.”

“Throckmorton County was organized in 1879, and the town of Throckmorton, located near the center of the county, became the county seat. Early businesses included a store operated by a Mr. Tadley and a restaurant-stage stand run by C. A. (Alex) Housley. By 1880 sixty-eight ranches or farms operated in the area.”

“One of the most important ranches in the area, the SMS Ranch, was put into operation during the late nineteenth century. Swante M. Swenson gained railroad and other lands in parts of Throckmorton, Jones, Shackelford, Haskell, and Stonewall counties in 1854. His sons, E. P. and S. A. Swenson, began fencing and running cattle on the lands in the early 1880s.”

“While ranching remained an important component of the local economy, hundreds of new farms were established in the area between 1900 and 1930, as the cultivation of cotton and wheat spread. Cotton was the first cash crop to be planted on a fairly large scale in the county; by 1910 cotton was being grown on 21,000 acres of county land and had become the county’s most important crop. With expanding cotton production came more intensive settlement. There were 694 farms or ranches in Throckmorton County by 1910, and the population had more than doubled to reach 4,563.”

“Oil had been discovered in the county in 1925, and despite the low prices that troubled the industry during the early 1930s, by 1938 almost 123,000 barrels were produced in the county. Nevertheless, more than 15 percent of the area’s population moved away during the depression, and by 1940 there were only 4,275 people living there.”

“In spite of the oil industry, in the decades following World War II farm consolidations, mechanization, and the search for new opportunities continued to drain the county’s population. The number of people living in the area dropped to 3,618 by 1950, to 2,767 by 1970, and to 2,053 by 1980.”

”In 2014 there were 1,608 people living in the county. About 86.2 percent were Anglo, 0.9 percent African American, and 11.2 percent Hispanic. In that year, 802 people lived in the town of Throckmorton, the county seat and the principal shipping point and supply center for surrounding ranches and oil operations. Other communities included Woodson (259), Elbert (29), Spring Hill, and Lusk. Visitors are attracted to the county by local hunting and fishing and by historic sites such as Camp Cooper and Camp Wilson. The town of Throckmorton hosts an Easter Egg Hunt and Festivities event each year in spring, Pioneer Days in June, and a Christmas Parade in December.”

Shortly after Throckmorton County’s creation in 1858, early pioneers chose the settlement of Williamsburg as county seat. However, since county organization wouldn’t come for a little more than twenty years later, the community was fairly defunct.

When Throckmorton became county seat in 1879, the first courthouse was built there. Reports indicate that it had to undergo repeated whitewash treatments through the 1880s, constantly demanding maintenance. A chimney and cistern, flues, and guttering were all added in the same decade.

Eventually, the expense to upkeep the building became too great. A county election was held in 1890 to approve a new courthouse, and the motion was passed. County resident J.E. Poole purchased the older building for $235. The original design constructed by J.L. DeWees and Jacob Rath bore a stately tower, as is visible in the photo above (circa 1890). However, a renovation effort in 1938 saw the advent of a county annex on the western side of the building and the removal of that tower. In its place came a squatty, less aesthetically pleasing cupola. From 2013 to 2015, that mistake was repaired. The county’s eyesore annex was demolished to free up the courthouse’s western façade and the cupola was altered to make way for a recreation of the historic tower. This restoration effort was financed by a $2,400,000 grant from the Texas Historical Commission and $2,800,000 of county funds, forming an approximate $6.2 million project. On March 12, 2015, the Throckmorton County Courthouse was publicly rededicated.

Unfortunately, I visited the area in November of 2013. During my time there, the humble beginnings of the restoration project had just begun to become visible. The exterior was not yet covered in scaffolding, but the courthouse’s interior had been recently emptied and vacated.

Heading back up to Throckmorton has been at the top of my list for some time now. Throckmorton is also the home of Bob Lilly. Maybe you’ll know who that is. I don’t. The inside of the courthouse, prepping for renovation. 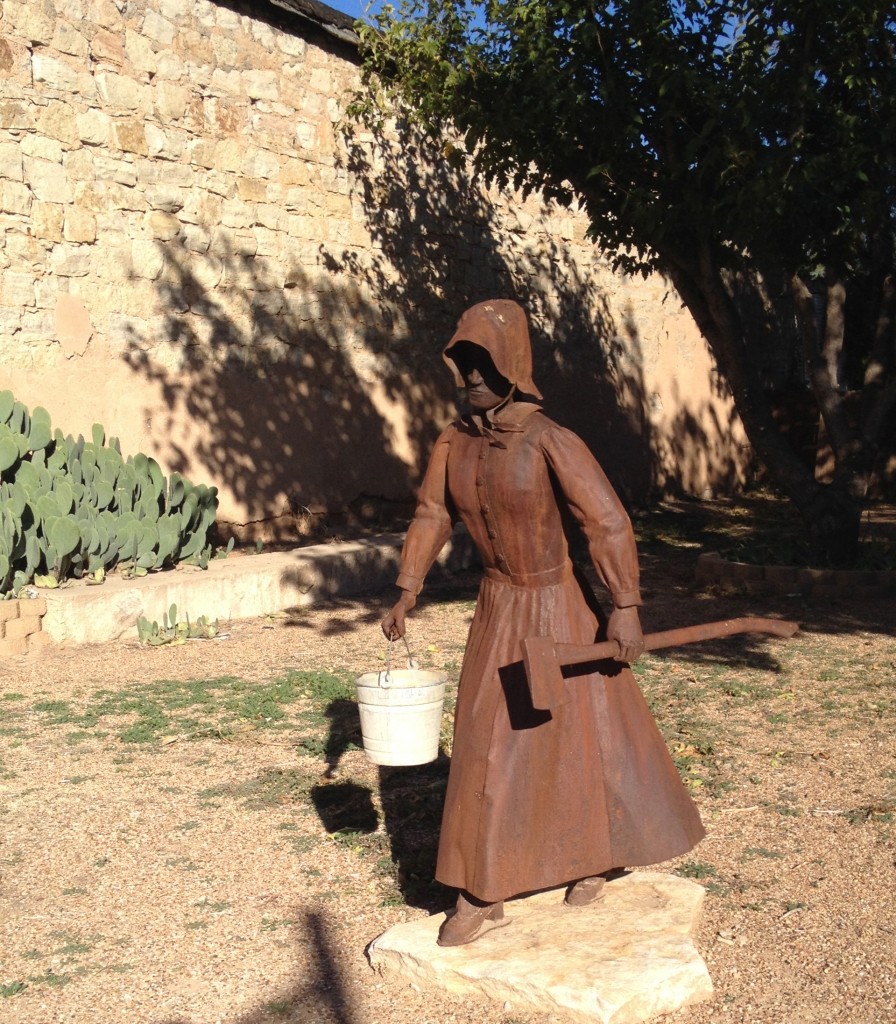 A unique sculpture can be found directly across the street of the main (eastern) entrance. 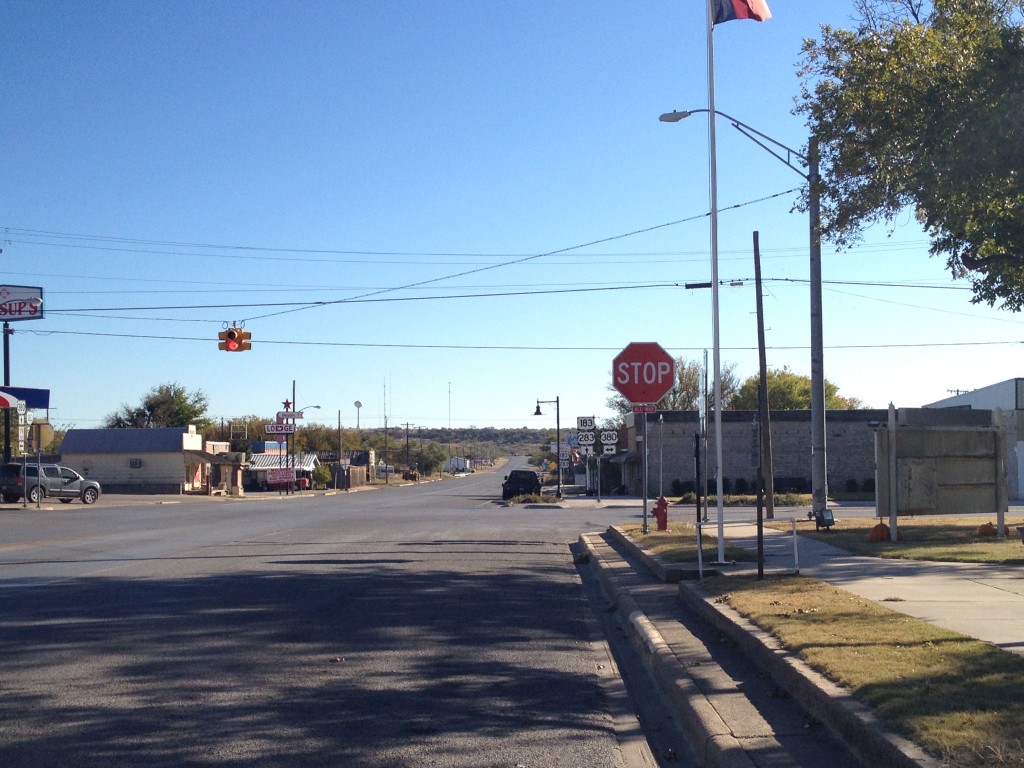 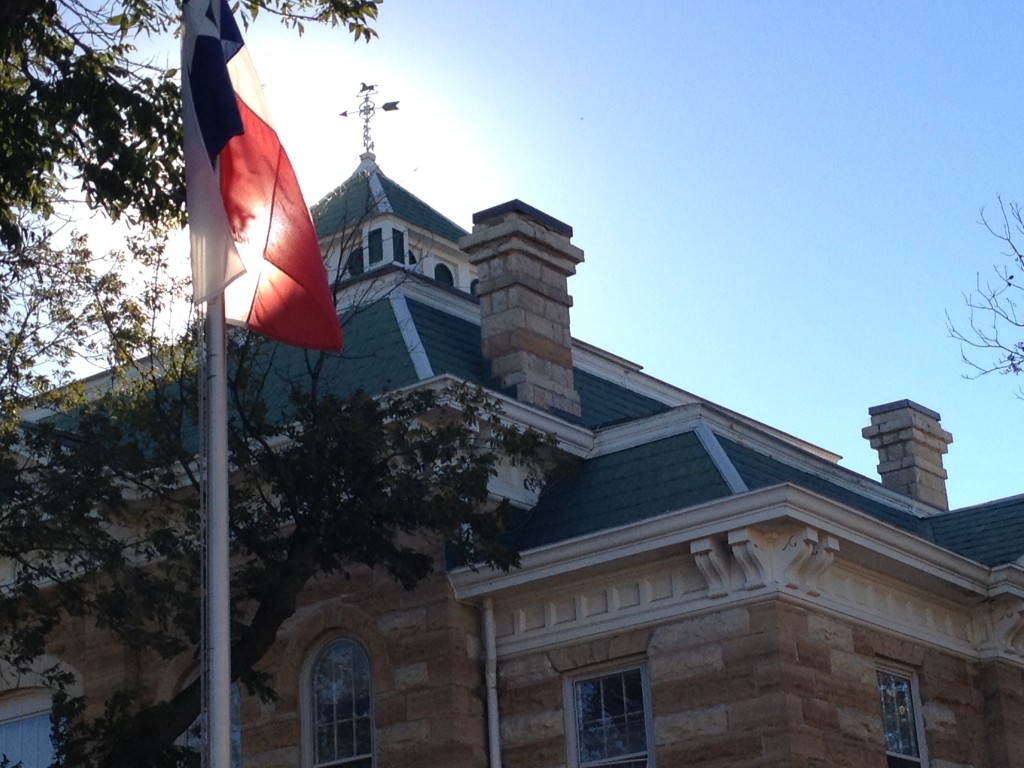