“The county was named for Charles R. Haskell, who was killed in the Goliad Massacre. The county covers 901 square miles of rolling plains broken and drained by tributaries of the upper Brazos River. The elevation ranges between 1,416 and 1,681 feet above sea level.”

“In 1858 the Texas legislature formed Haskell County from lands formerly assigned to Milam and Fannin counties. Because of Indian hostility in the area, however, the county remained unsettled for nearly two decades. During this period several Indian fights took place in the county, including an engagement at Double Mountain on April 3, 1867, and Capt. Adna R. Chaffee‘s fight on South Point (California) Creek near the Jones county line in March 1868. By 1876 the Indian menace had subsided, and the county was reestablished.”

“J. Wright Mooar and other hunters operating out of Fort Griffin slaughtered the buffalo herds that roamed through the area; mustangs that frequented the springs in the county were rounded up in annual drives. Ranchers began moving into the area in 1877, when George T. Reynolds and John A. Matthews established their ranch headquarters on California Creek.” 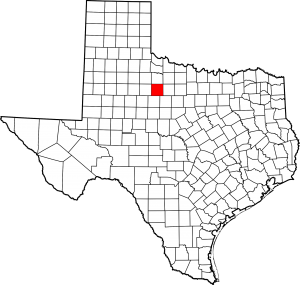 “Sometime later W. R. Standifer, a former buffalo hunter, brought a flock of sheep to Willow Pond, or Rice Springs, near the center of the county. The 1880 census found forty-eight people living in the county; the agricultural census reported two ranches in the county that year.”

“By the fall of 1882 the ranching community of Rice Springs had begun to flourish, and in December its name was changed to Haskell in response to a request from the United States Post Office.”

“Haskell County was organized in January 1885, with Haskell designated as the seat of government; Tom Tucker was elected the first county judge. A small, two-story frame structure served as the first courthouse until a larger, native-stone building was completed in 1891.”

“By 1890, 105 ranches and farms had been established in the county. Ranching was the mainstay of the local economy; 5,564 cattle and 6,171 sheep were reported that year. But crop farming was also beginning to become important, as corn was planted on 1,421 acres and cotton on 1,340. By 1900 the county had 256 farms and ranches, and though corn was grown on only 159 acres that year, cotton cultivation had expanded to 3,674 acres.”

“In 1910 there were 2,210 farms in Haskell County, and the population had increased to 16,249. That year more than 18,420 acres in the county was planted in corn, and 1,893 acres in wheat, but the county’s most important crop was cotton; more than 75,000 acres of Haskell County land was devoted to the fiber by 1910. The county’s agricultural economy was also becoming more diversified. County farmers had planted more than 28,000 fruit (mostly peach) trees by 1910, and more than 10,300 chickens were reported on local farms. While declining in relative importance, cattle ranching remained an important component of the economy, as over 34,000 cattle were counted in Haskell County that year.”

“The farming sector suffered severely during the Great Depression and Dust Bowl years of the 1930s, however. Almost 100,000 acres of cotton land fell out of production, and by 1940 the county had lost 441 farms, or almost 19 percent of the total ten years earlier. Hundreds of people moved out of the county, and by 1940 Haskell County had only 14,905 residents.

“Haskell, the county seat and largest town (population, 3,266), remains a farm trading center and maintains the county hospital. Other towns include Rule (627), O’Brien, Rochester, Weinert, and Stamford (most of which is in Jones County). In 2014, 5,769 people lived in Haskell County. Of those, 68.8 percent we”re Anglo, 4.5 percent African American, and 25 percent Hispanic. In addition to the Burlington Northern and Santa Fe railroads, the county is crisscrossed by two U.S. highways (277 and 380), two State highways (6 and 283), and a number of farm-to-market roads. Lake Stamford, impounded in 1951 when a dam was built on Paint Creek, provides recreation for local residents and visitors. Haskell hosts the Frontier Days Celebration and Rodeo in May, and the town also maintains the Haskell County Railroad Museum.”

I was the guest of Haskell and Haskell County on November 9, 2013. 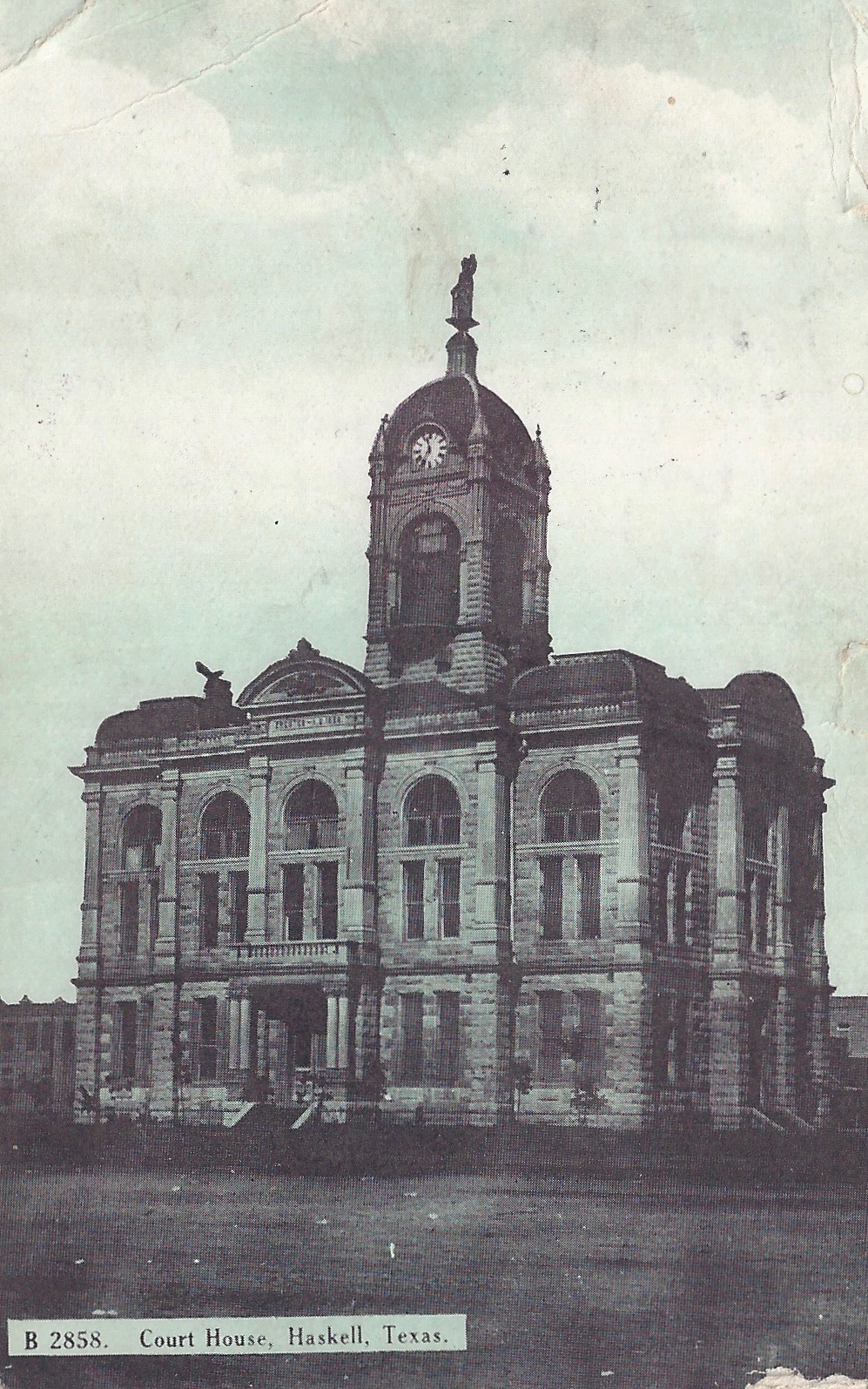 Haskell County hired the A.O. Watson firm to design a suitable courthouse to succeed the county’s original 1885 version. While Watson would go on to form an architectural pair with Jacob Larmour, this creation preceded their union.

As seen in the photo above, the building was originally designed in the Romanesque Revival style, but an increasing population brought a need for more rooms and more space. In 1906, the tower was removed and the roof flattened. In 1931, impressive wings were added to both the western and eastern façades, widening the courthouse considerably. 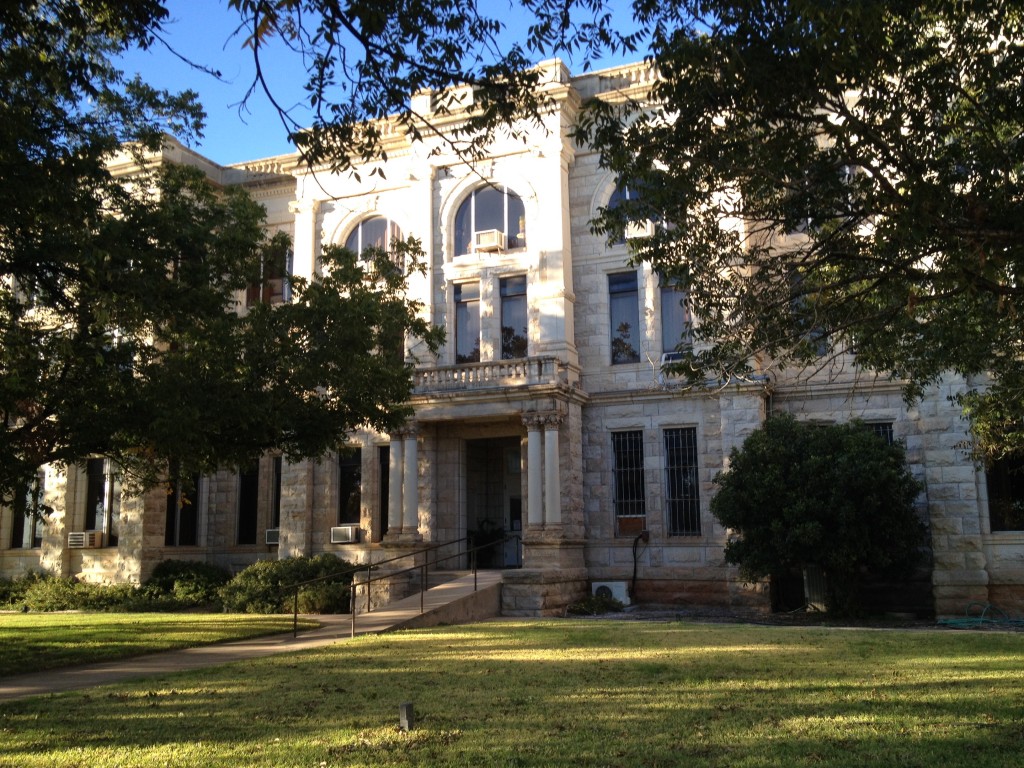 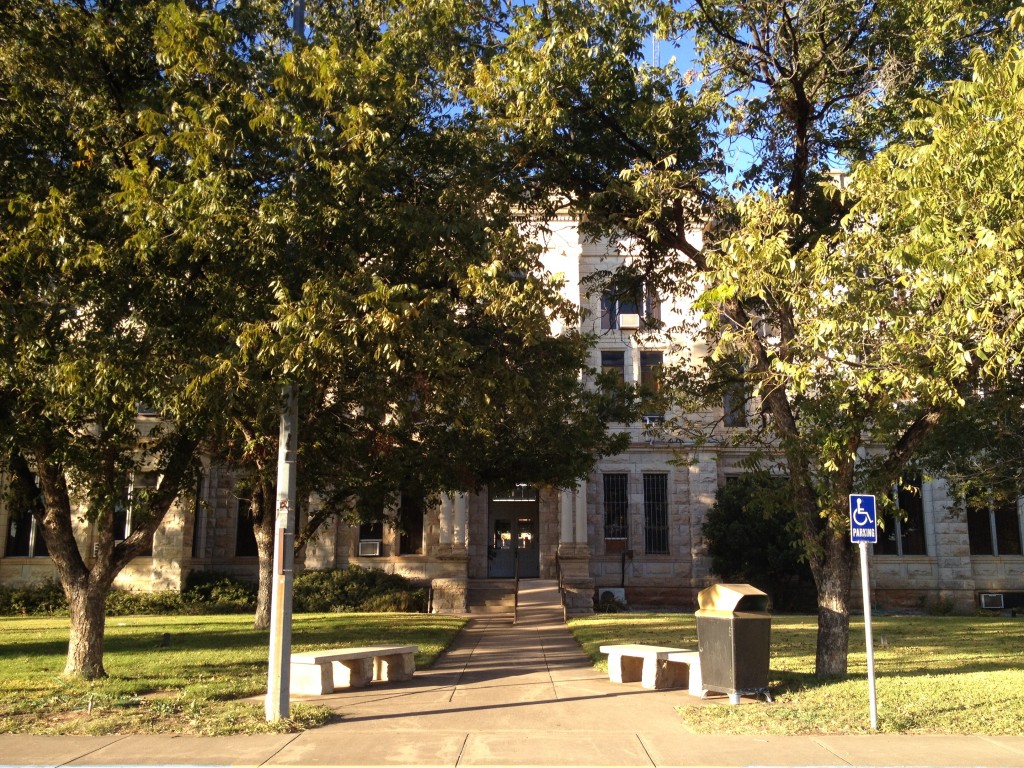 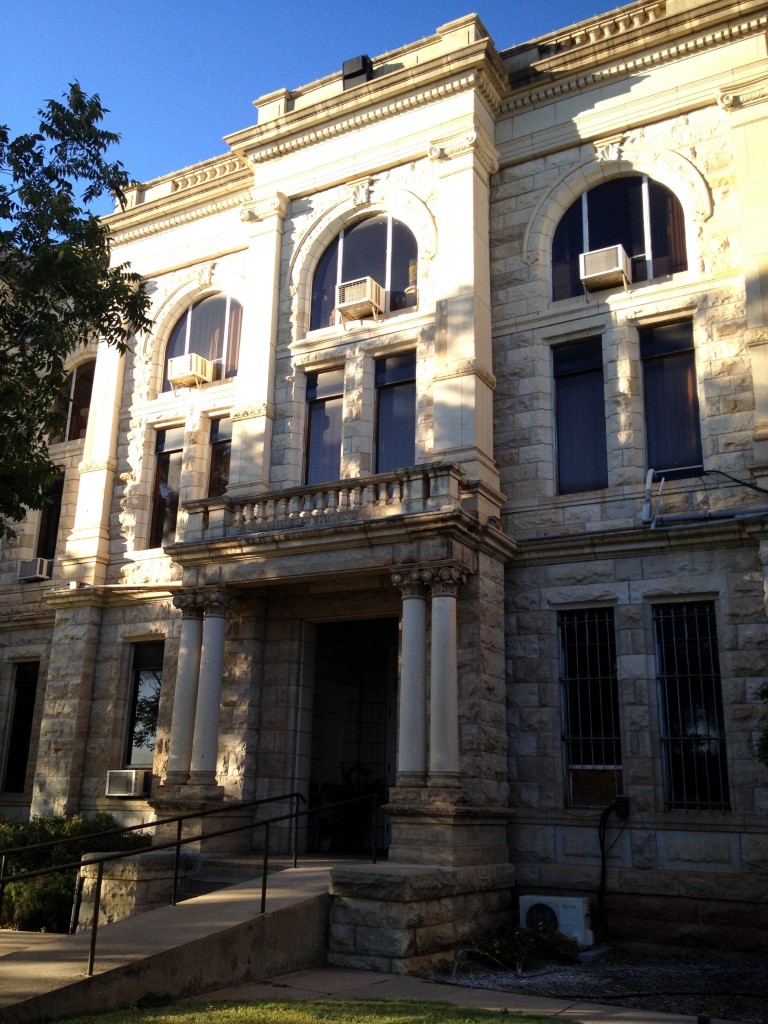 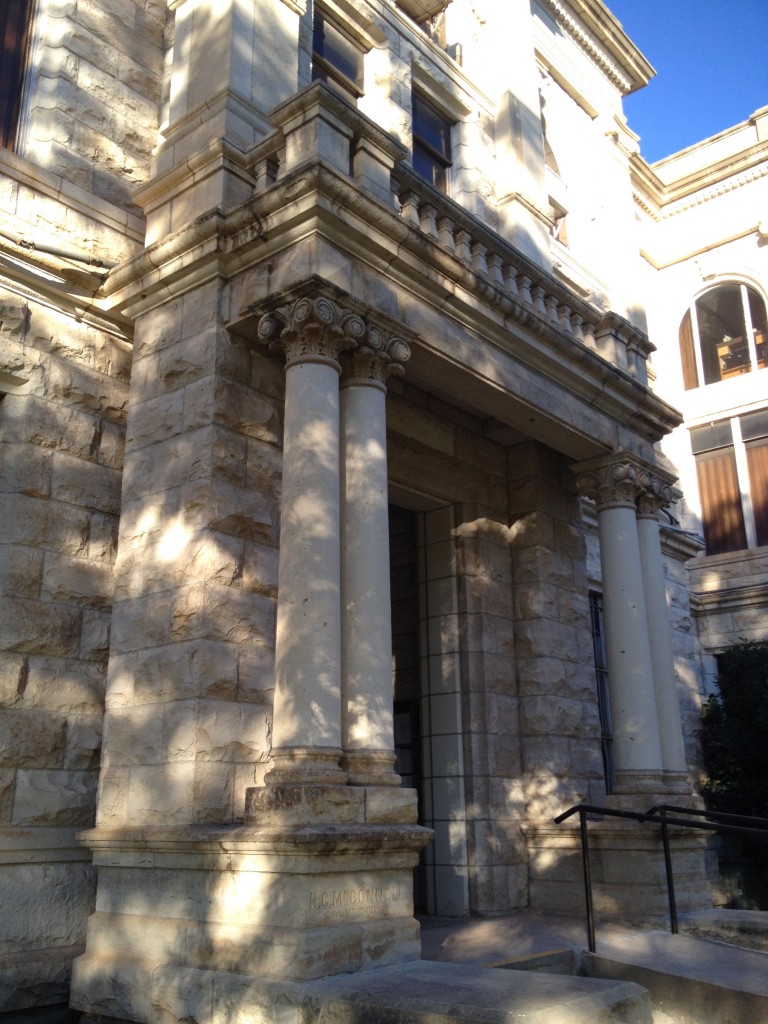 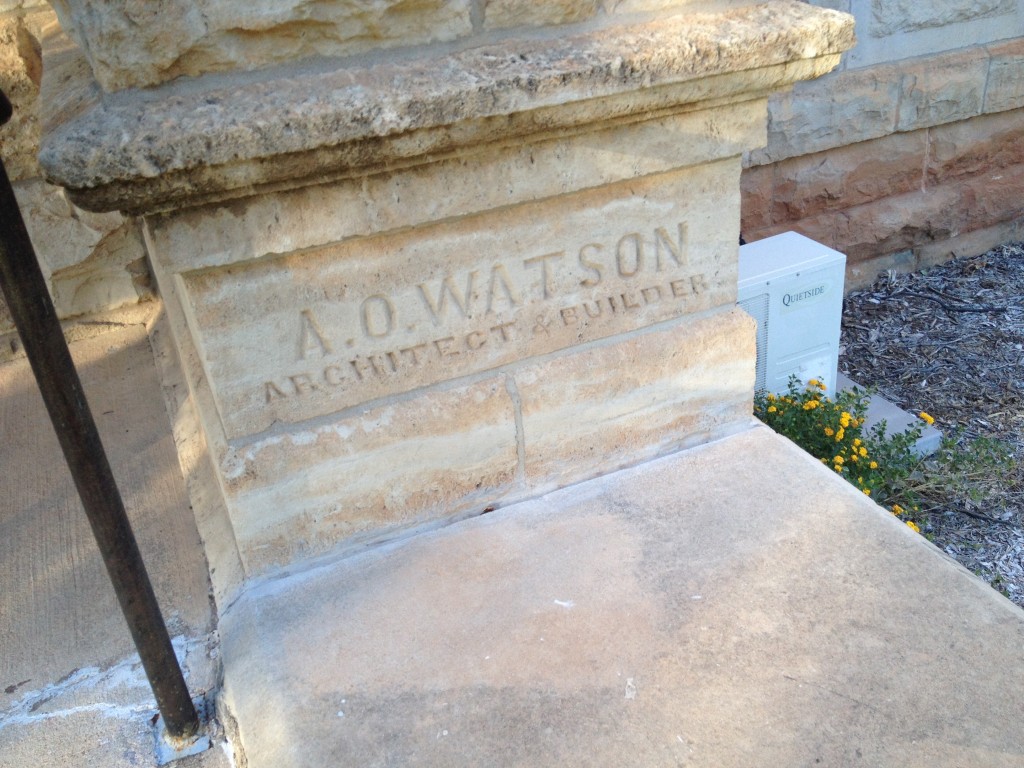 The “cornerstone,” if you could call it such, is split into two parts on either side of the southern entrance. A.O. Watson served as architect and contractor. 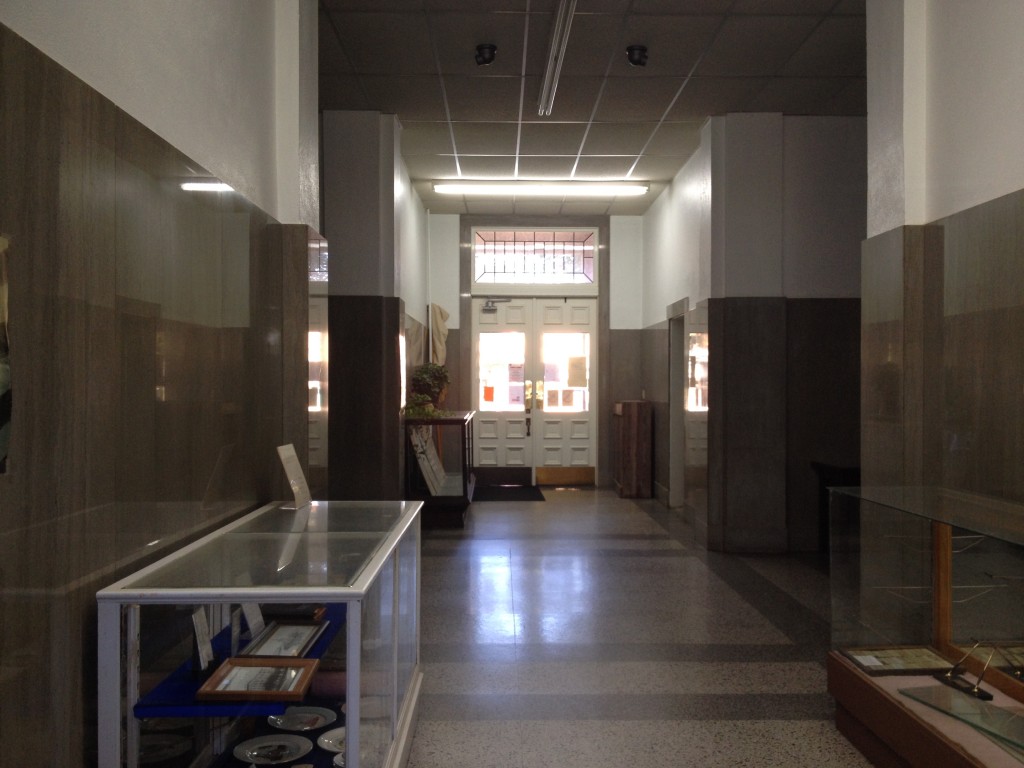 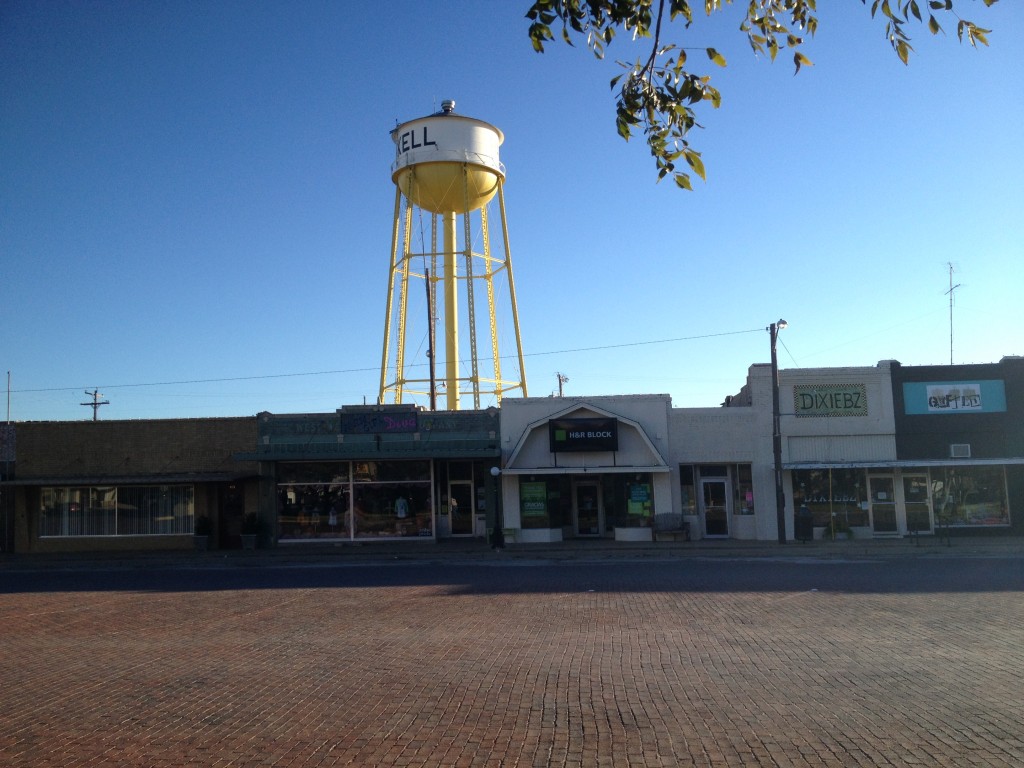 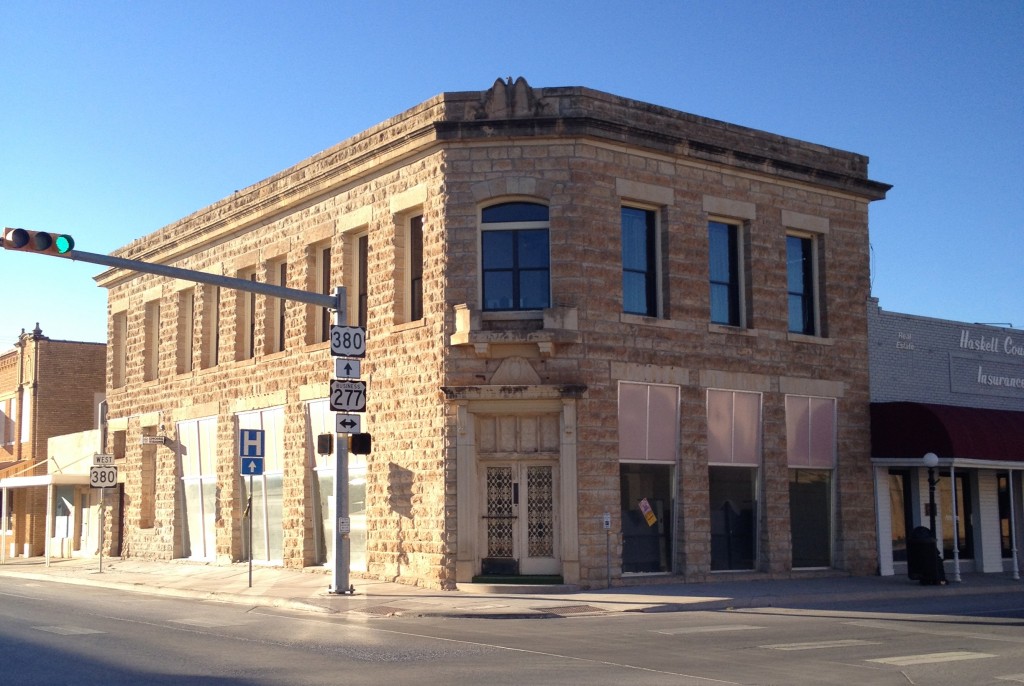