“The county comprises 788 square miles of the Blackland Prairie region of Northeast Texas. The terrain is predominantly level to gently undulating, with an elevation ranging from 300 to 550 feet above sea level. The county is on the divide between two large rivers, the Trinity and the Sabine.”

“The first Kaufman County settlement was started in 1840 by William P. King and a group of forty pioneers from Holly Springs, Mississippi, who had purchased certificates for headrights from the Republic of Texas. The group built a fort and named it King’s Fort in honor of their leader. Because of readily available land grants and because the land had been praised in eastern towns, the area around King’s Fort, or Kingsboro, or Fort de Kingsboro, attracted settlers rapidly.” 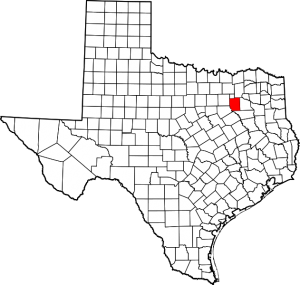 “Kaufman County was drawn from Henderson County, established in February 1848, and named for David Spangler Kaufman, a diplomat and member of the Congress of the Republic of Texas, the legislature of the state of Texas, and the Congress of the United States. King’s Fort was renamed Kaufman and became the county seat in March 1851, after four elections.”

“The county’s northern boundary was reduced by the establishment of Rockwall County in 1873, and its limits have since remained unchanged. Kaufman County was settled predominantly by natives of the southern United States, particularly Tennessee, Arkansas, and Missouri. Though slaves were brought to the county, slavery was never widespread here, perhaps because cotton culture remained minimal until after the Civil War. The 1860 census counted 533 slaves (15 percent of the population).”

“In 1861, by a three-fourths majority, Kaufman County’s citizens voted in favor of the state’s secession from the Union. During the four years of the Civil War, the county contributed several companies of soldiers, most of whom fought in Elkanah B. Greer‘s regiment. In terms of actual combat, the war did not come to Kaufman County, although it was felt, as slave patrols were established in each precinct and the tax dollars of the citizens went to purchase supplies for county companies in the war and to arm the county.”

“From 1880 to 1930 Kaufman County retained its antebellum rural and agricultural character. During this fifty-year period, the population almost tripled, growing from 15,448 to 40,905. The county’s black population more than doubled between 1880 and 1930, rising from 13 percent to 29 percent of the total. The number of farms more than tripled, rising from 1,594 to 5,131, the latter again an all-time high.”

“The Texas and Pacific Railway was completed through the northern part of the county in 1873, when it was linked with Longview to the east and Dallas-Fort Worth to the west. During the mid-1890s, the Texas-Midland Railroad was completed through Kaufman County to Garret in the south and Paris in the north. The T-M, which had been purchased by Hetty H. R. Green in 1892 and was run by her son, Edward H. R. Green, established its shops and offices in Terrell, thus bringing an important industry to the county. The nonagricultural economy expanded slowly from 1880 to 1930.”

“The 1930s and 1940s witnessed significant changes in Kaufman County as the Great Depression and World War II affected its people. Farm value fell by 56 percent between 1930 and 1940, and the number of farms decreased by more than 1,800. Unemployment rose from 2 percent in 1930 to more than 16 percent in 1940. In 1935, 1,294 workers were on government relief in Kaufman County. By 1940, 947 workers were employed by government works programs, while 1,163 workers were unemployed. A Civilian Conservation Corps camp near Kaufman employed young men in soil-conservation and erosion-control projects, and the National Youth Administrationmaintained a machine shop in the town. The Work Projects Administration spent over $1 million in Kaufman County between 1935 and 1940 on road and bridge construction and various building programs.”

“As the population of Kaufman County and its agricultural production declined, there were other, more positive, developments. The growing importance of the automobile greatly affected transportation. In 1932 the county had 5,089 registered motor vehicles. By 1946 the total stood at 6,862. There were 8,700 automobiles registered in the county in 1956; by 1970 the number had risen to 11,969, and the county was served by U.S. highways 80 and 175, State highways 34 and 243, and Interstate Highway 20, the major route of traffic from Dallas to Shreveport.”

I was the guest of Kaufman and Kaufman County on November 22, 2013. 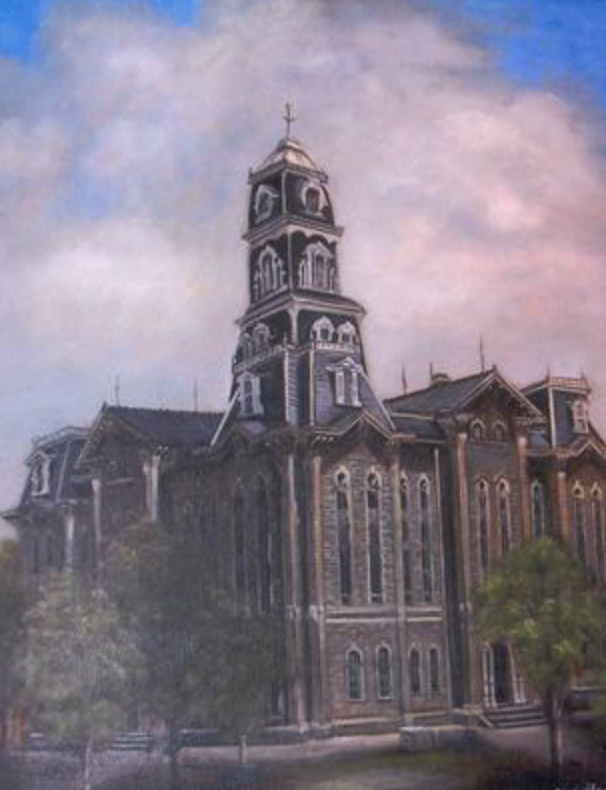 Wesley Clark Dodson designed Kaufman County’s third courthouse in the Second Empire style. The three-story, stone building cost $69,569 to build and originally boasted a sizable central tower (like nearly all of Dodson’s other works). At some point in its history, the top of the tower was either removed or burned away, and the building was renovated to look as you can see below. 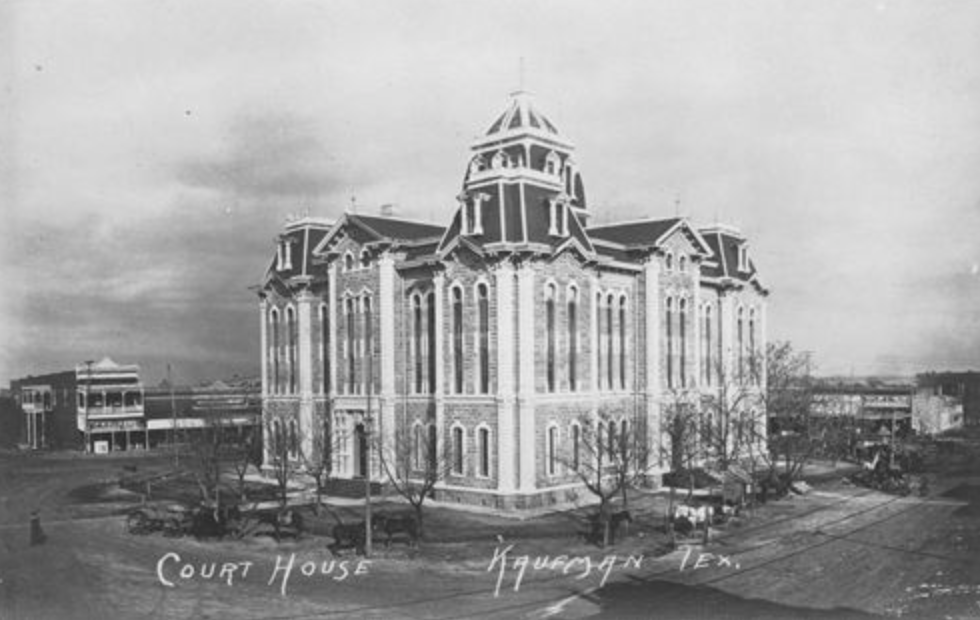 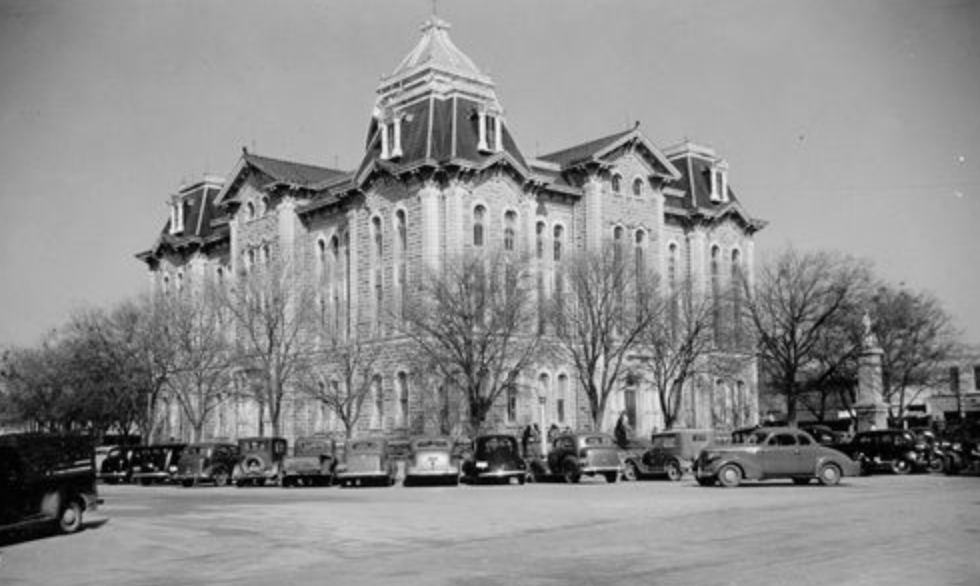 It was demolished in the Fifties for something with a modern modern flare. What drove counties to do this, I will never know.

It was designed by modern architects More & McGill. What more can I say? 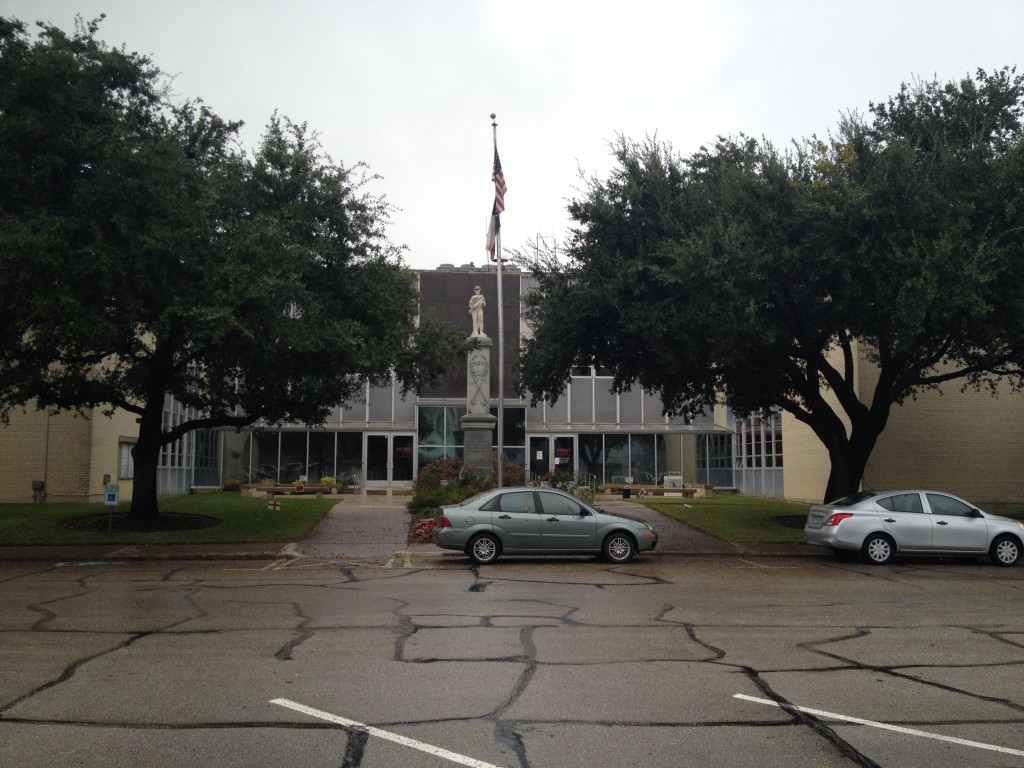 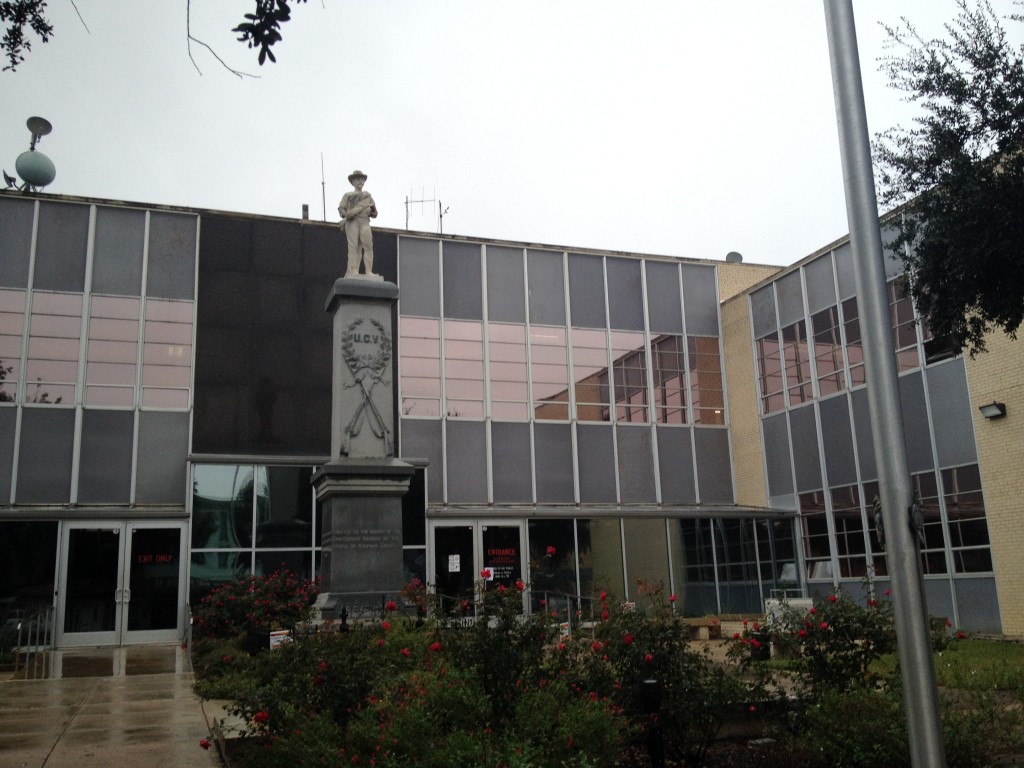 The building’s most distinguishable feature is the entry courtyard, complete with a Confederate veterans memorial. 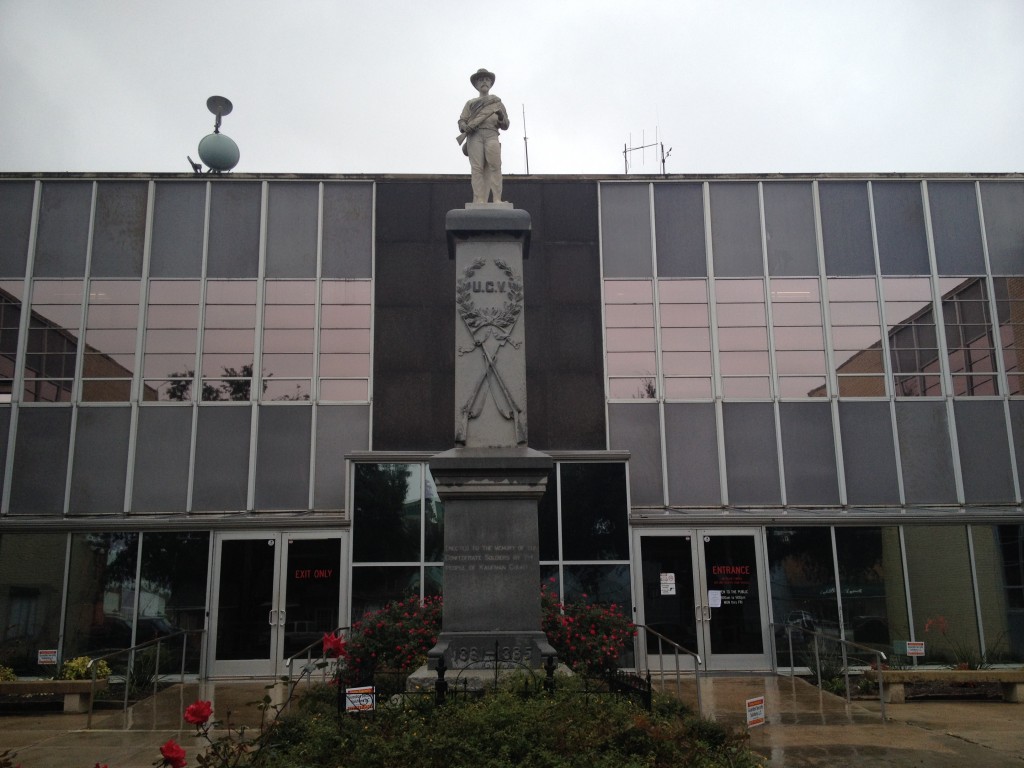 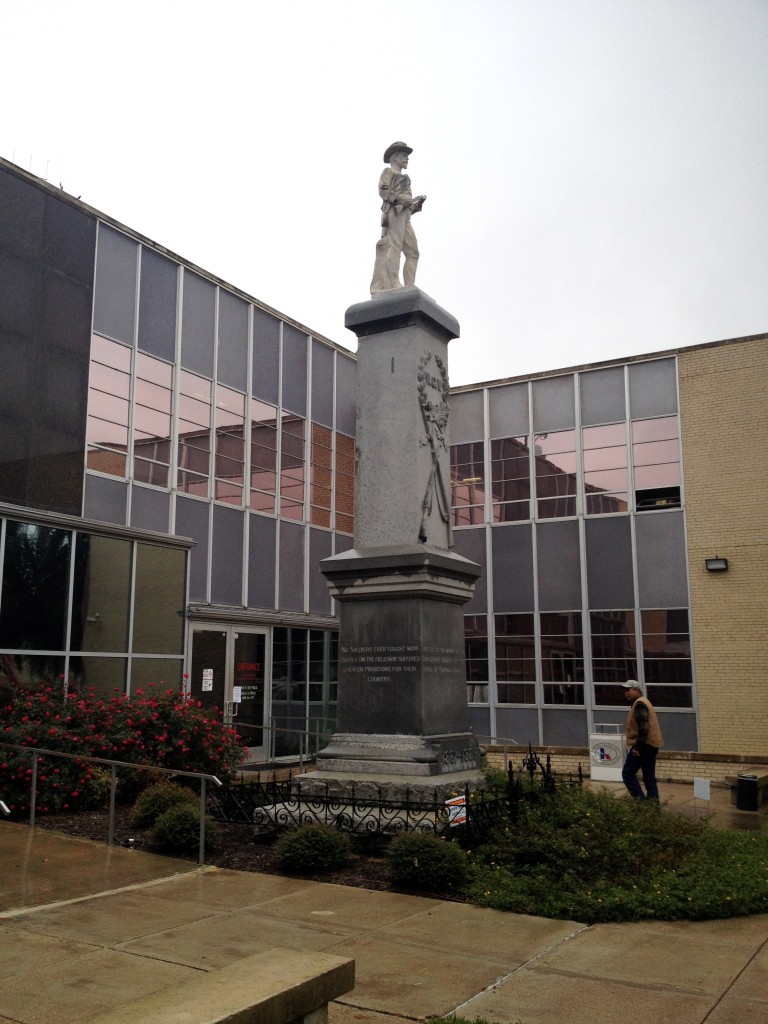 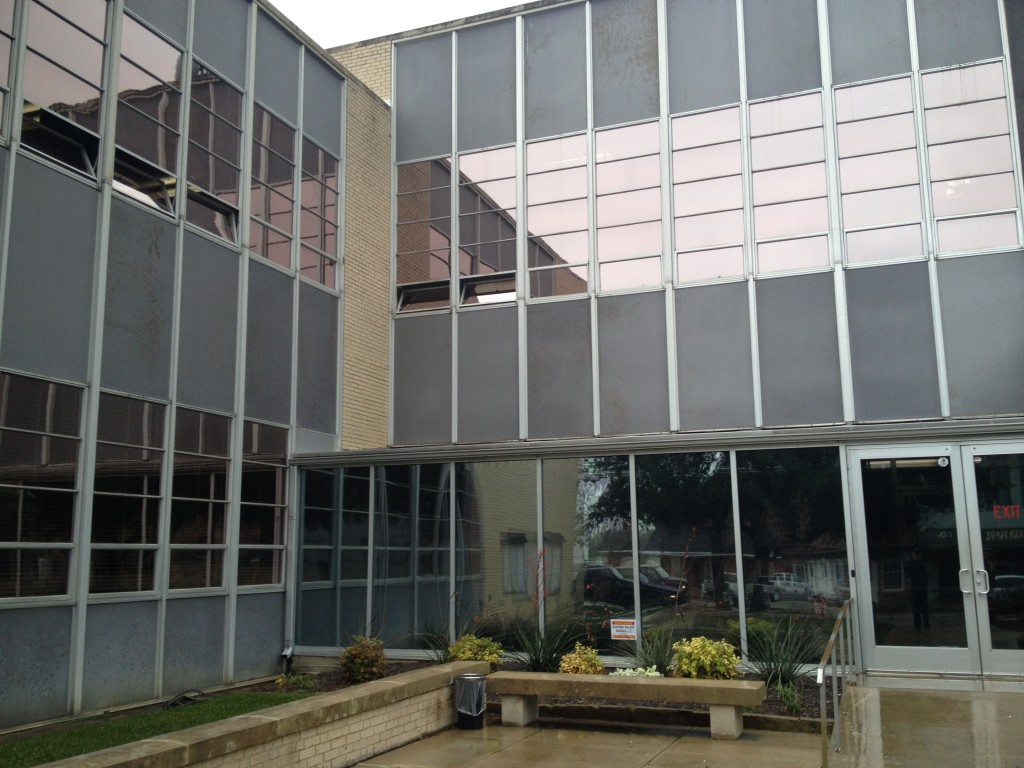 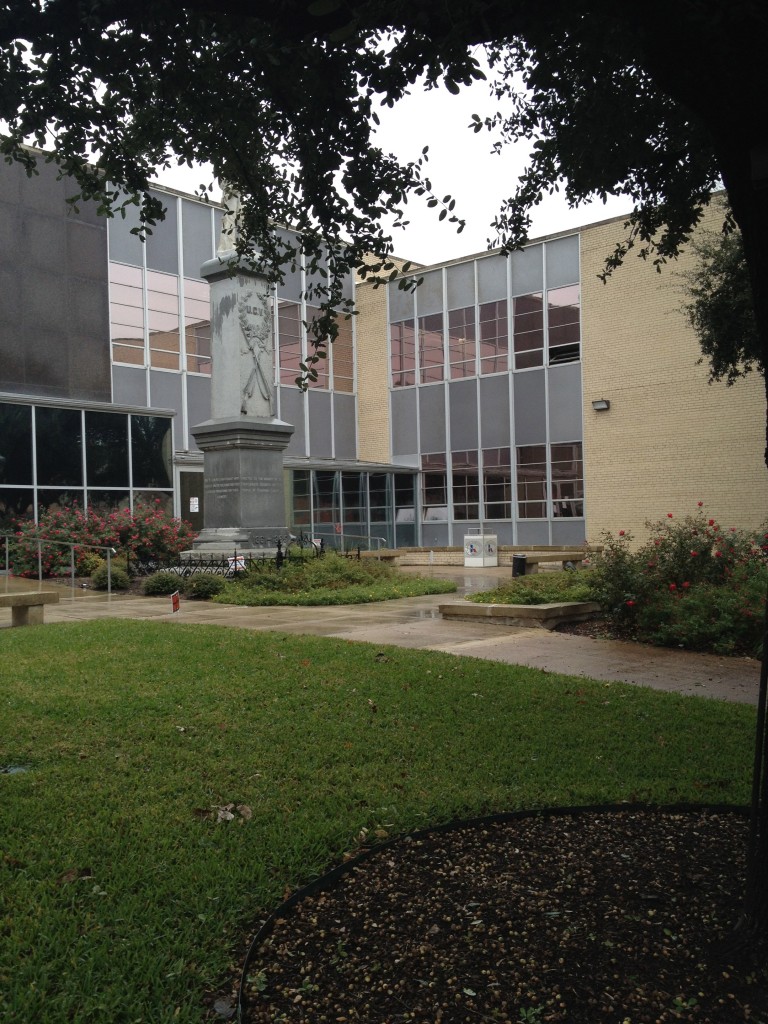 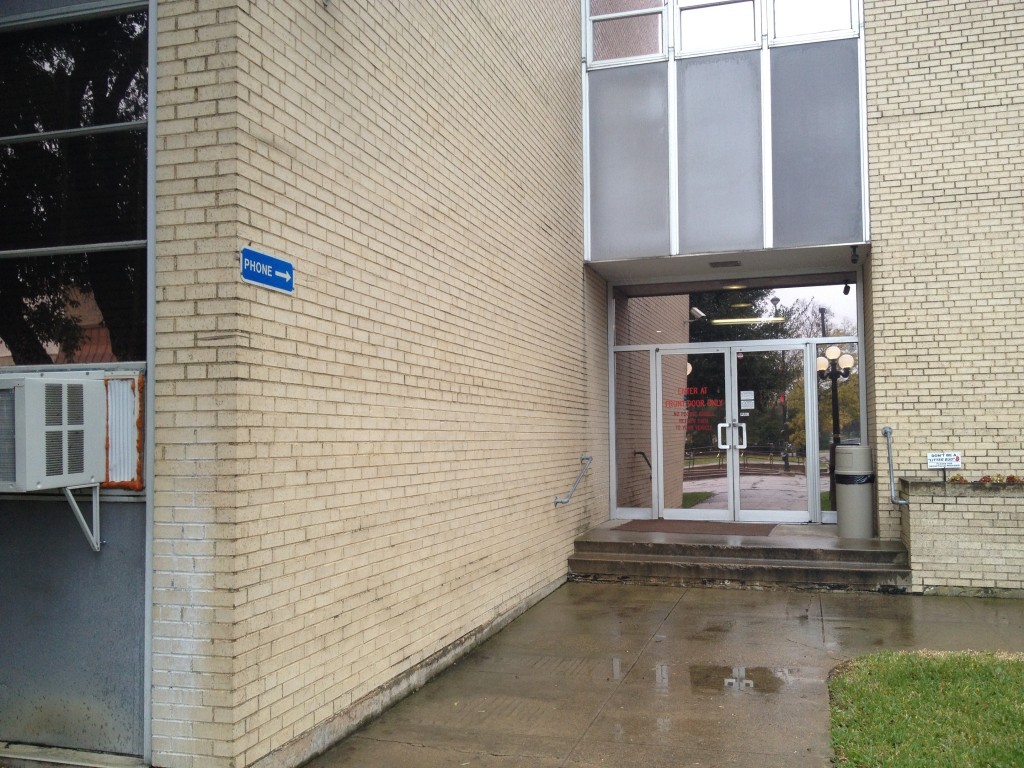 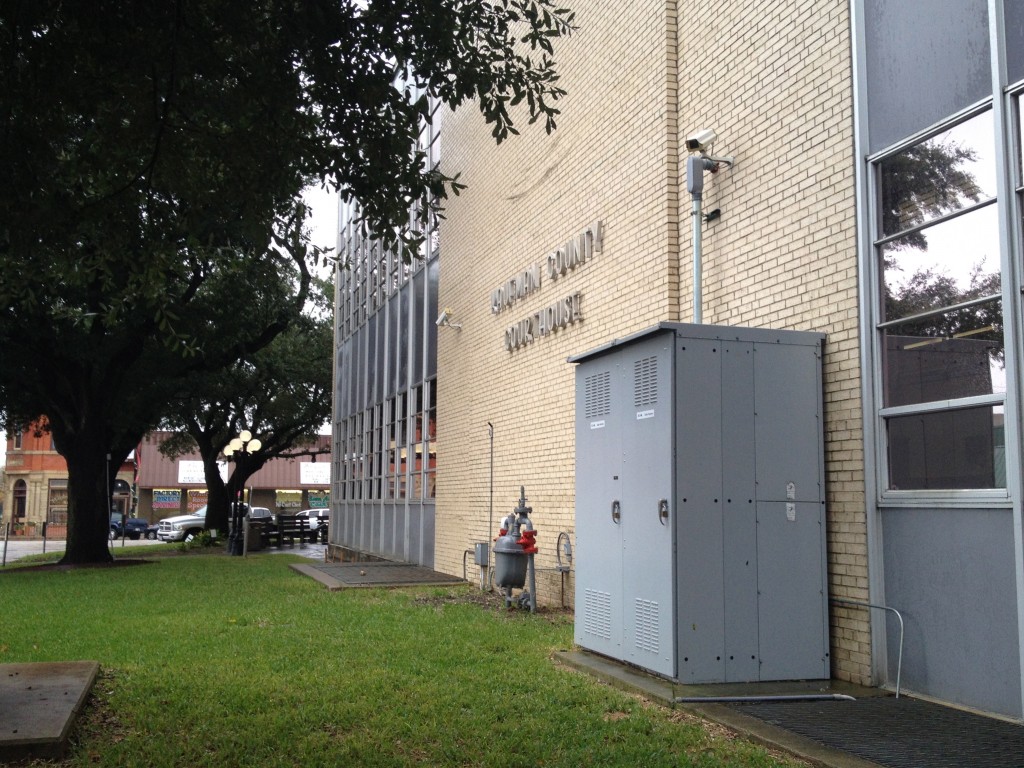 The building’s northern side 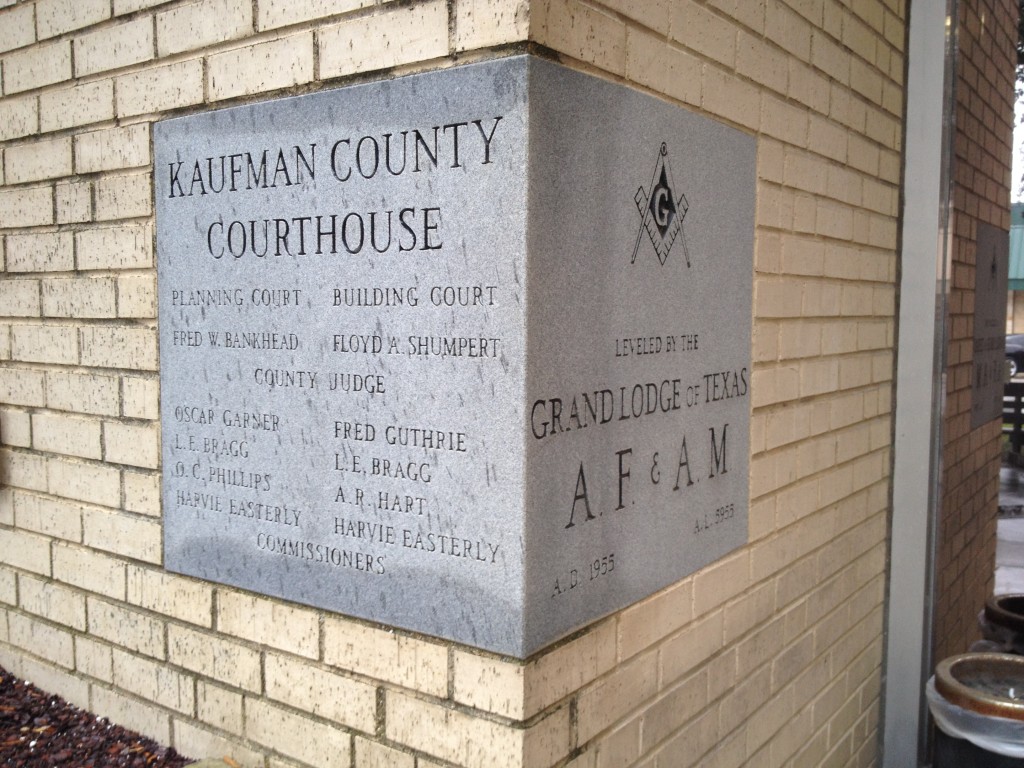 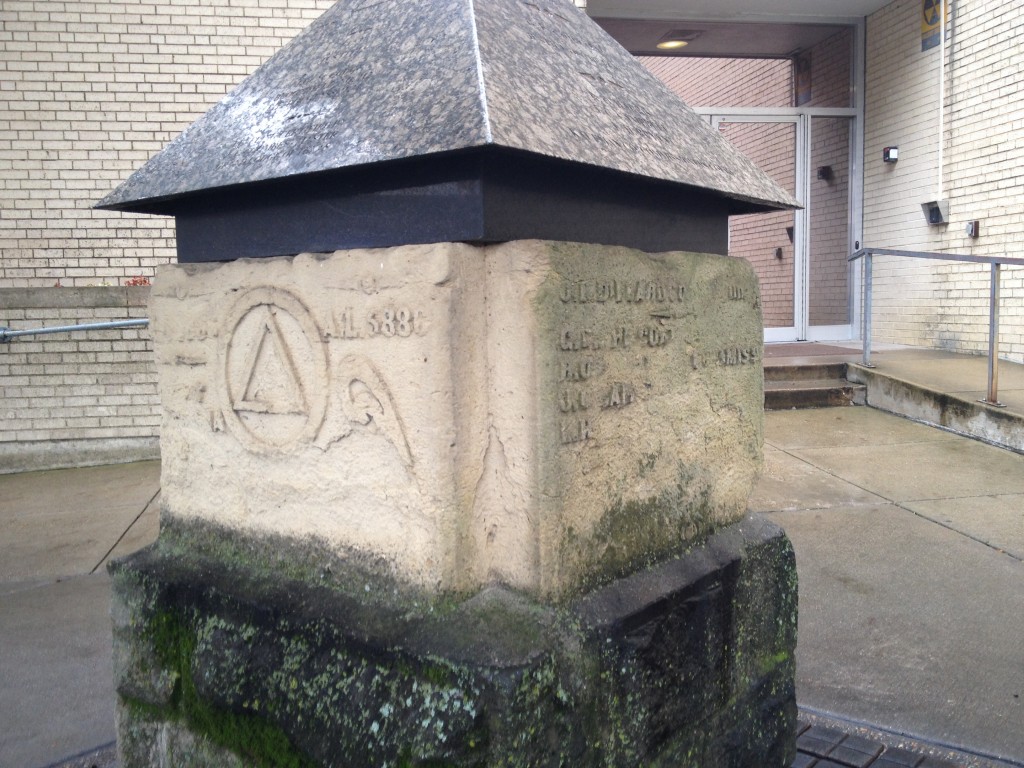 …and the historic cornerstone, displayed near the northeastern corner of the building 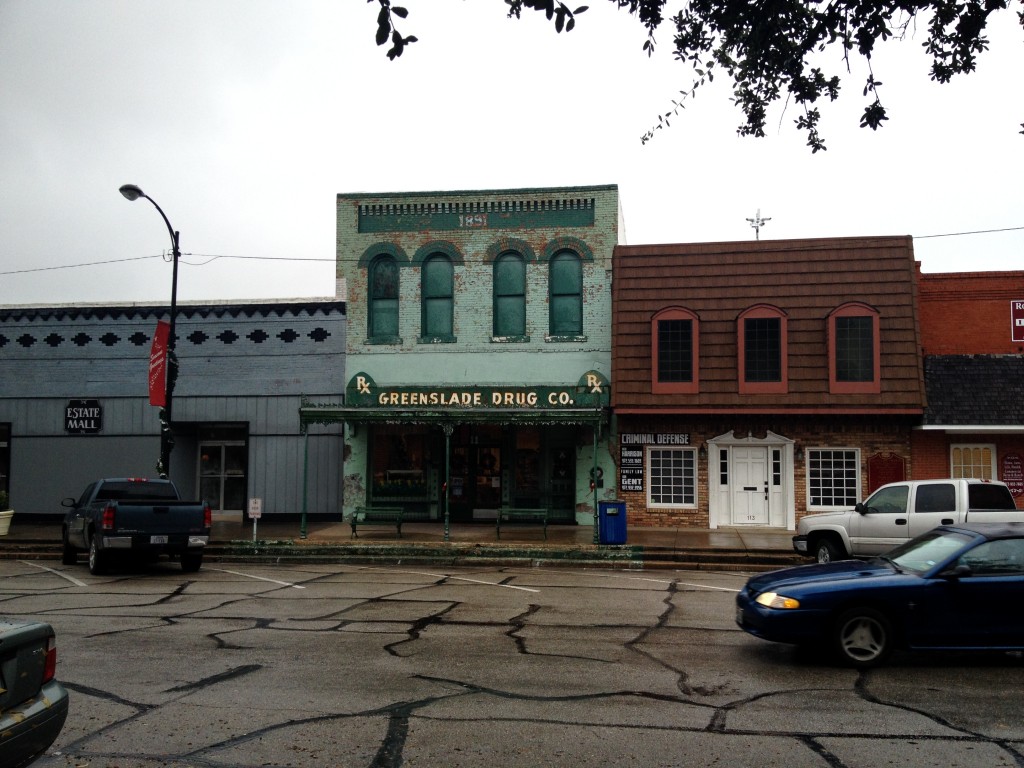