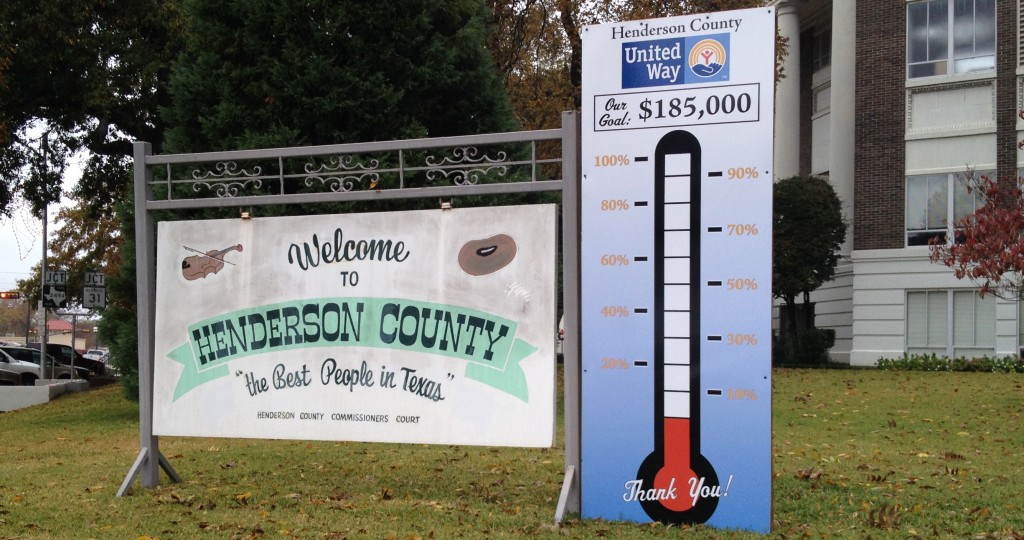 “Henderson County is in a transitional region between East and Central Texas. Two major lakes are partly in the county: Cedar Creek Reservoir on the northwest and Lake Palestine on the southeast. The county encompasses 949.7 square miles and has different land-resource areas that run almost parallel to the two river boundaries in a northwesterly to a southeasterly direction. The eastern third of the county, along the Neches River, is part of the East Texas Timberlands.”

“People of European origin did not settle in the area until after the Texas Revolution in 1836, though the future Henderson County was part of the Nacogdoches District in Spanish and Mexican Texas. Although no settlers lived in the area at the time, more than a dozen Mexican land grants were made there. In 1836 the region was inhabited by Indians—Cherokees, Shawnees, Delawares, and Kickapoos—who migrated westward in the winter of 1819–20 ahead of white settlement.”

“White settlers moved first into the area along the Trinity River and then into those previously occupied by the Indians. Some of the first settlers were Jane Irvine, who had a Mexican land grant of a league and a labor, and Henry Jeffreys, who owned the league of land where the first community, Buffalo, developed.”

“The Texas legislature established Henderson County on April 27, 1846, and named it in honor of James Pinckney Henderson, first governor of the state of Texas. The county was formed from parts of Nacogdoches and Houston counties.”

“Henderson County was organized on August 4, 1846, and comprised 3,500 square miles at the time. Buffalo was the county seat until March 1848. Bennett H. Martin presided over the first district court in Buffalo in 1847. Centerville, six miles west of the site of present Eustace, near the center of the county, was to be the permanent county seat.”

“But Centerville did not remain the county seat. On April 2, 1849, the archives and county government were returned to Buffalo, for reasons not exactly clear, and Centerville ceased to exist.”

“In 1848 the legislature formed Van Zandt and Kaufman counties out of Henderson County and reduced it to its present size. The center of the county again moved. J. B. Luker became chief justice, James Boggs sheriff, and E. J. Thompson county clerk. Court was held under a grove of red oak trees where the present courthouse stands.”

“The name of the new county seat, Athens, was suggested by Dulcina A. Holland (later Mrs. Dull Avriett), who hoped the town would be a center of learning. The first courthouse, built in 1850, cost the county fifty dollars.”

“By 1860 the county more resembled the Deep South. Roads, ferries, and bridges replaced buffalo trails. Cotton had increased in importance. Lumber, leather work, and clay products were manufactured. Levi Cogburn established a pottery company in 1857 to manufacture cups and saucers. Two other manufacturing firms, a lumbermill and a gristmill, helped boost the number of persons employed in manufacturing to thirty-nine, who received $14,700 in wages and produced $35,180 worth of goods.”

“The county continued to grow into the 1890s, aided by the completion of the St. Louis and Southwestern Railroad, although manufacturing declined. The Texas and New Orleans was extended from Dallas through Kemp to Athens by 1898. Eustace was established on this line in 1900. Commercial development increased, and in 1890 T. F. Murchison became the first banker because his store had the only vault in the county.”

“Agriculture and manufacturing progressed subsequently. Hay and livestock production replaced the traditional crops of family farms in the 1950s, when the Henderson County Livestock Association was formed. From the 1950s to the 1970s the number of farms decreased to mid-nineteenth-century levels. Production of cattle, peaches, and pears rose to higher levels than ever before; the last cotton crop reported in the census, that of 1969, amounted to only sixty bales.”

“In 1990 most county residents were employed in manufacturing. Retail trade had doubled since 1956, service jobs had quadrupled, and agricultural jobs had remained stable. Mining, oil, and gas had declined, while transportation and public utilities had grown slightly. Wholesale trade had declined and finance had risen. Recreation and entertainment, hunting, and fishing, bring people to the county along the Texas Forest Trail and the Texas Lakes Trail.”

I was the guest of Athens and Henderson County on November 22, 2013. 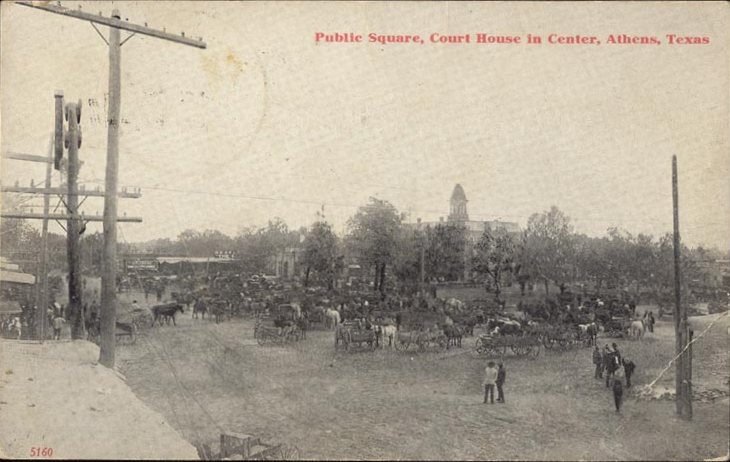 C.H. Hawn & Co. designed this two-story, brick courthouse in the aftermath of a fire that consumed the 1860 wooden frame courthouse of William Warenskjold. It too happened to burn, in 1913.

The L.L. Thurmon & Co. firm was selected by the Commissioners Court to design this Classical Revival courthouse with a fairy unique building pattern. The wings of the courthouse extend at angles, which is a peculiarity only otherwise found in nearby Rains County. L.R. Wright & Co. of Dallas carried out its construction.

Most notable are the courthouse’s impressive pediments, which mimic those of the Ancient Greek Acropolis in Athens (which is no mere coincidence). 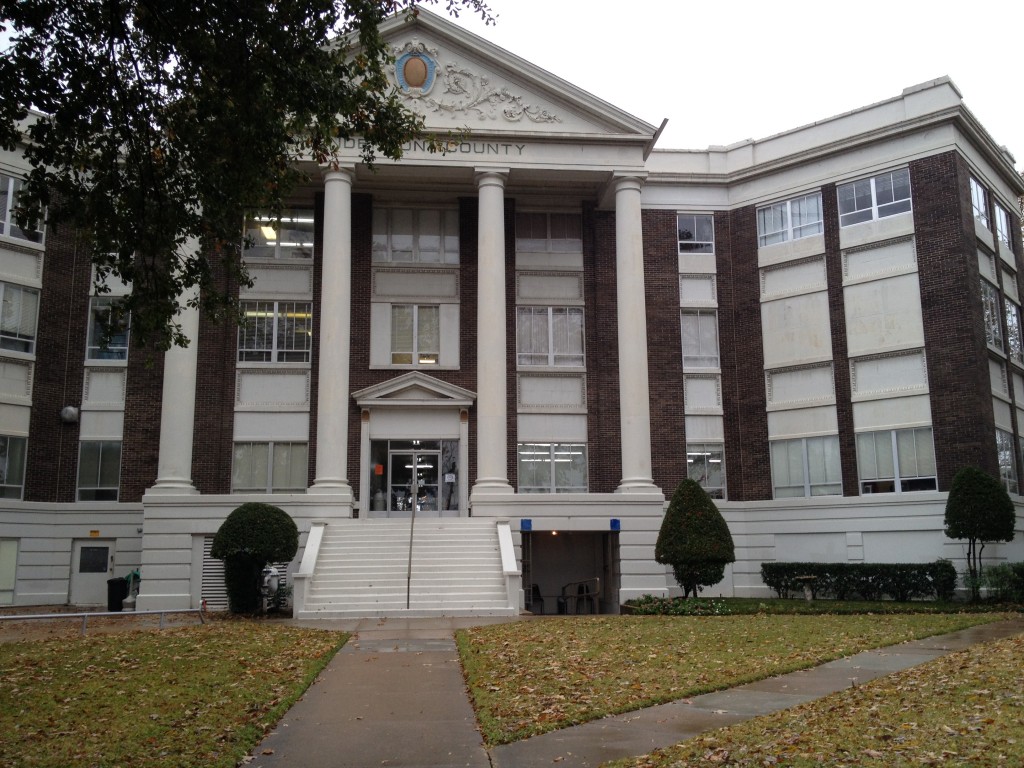 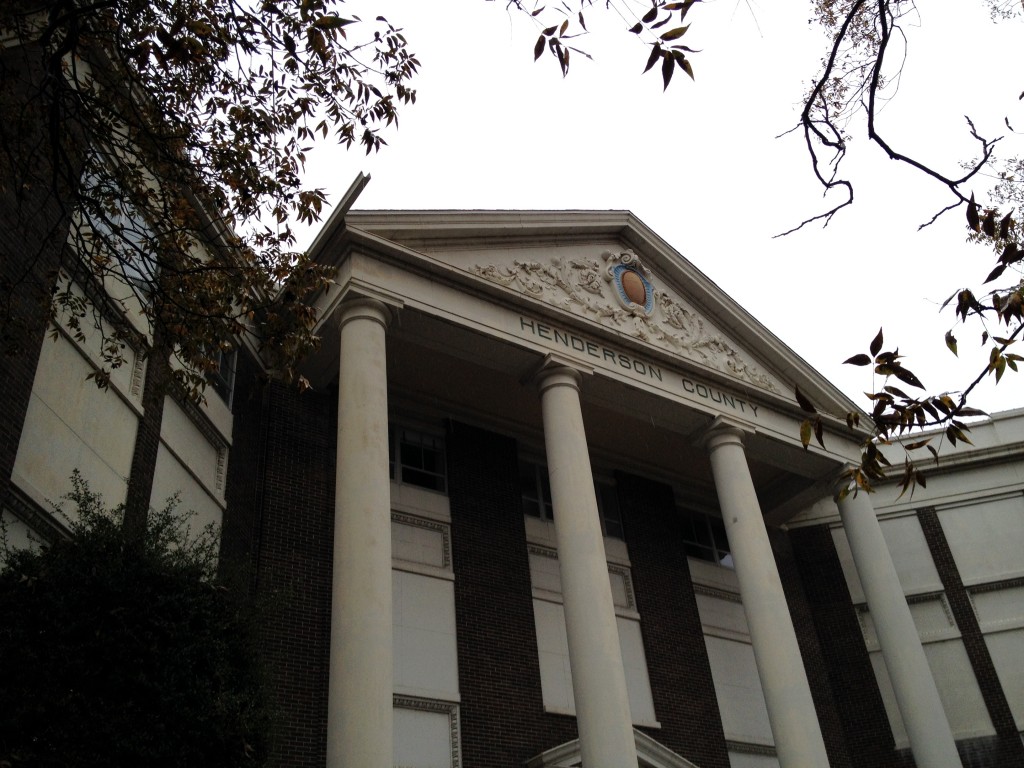 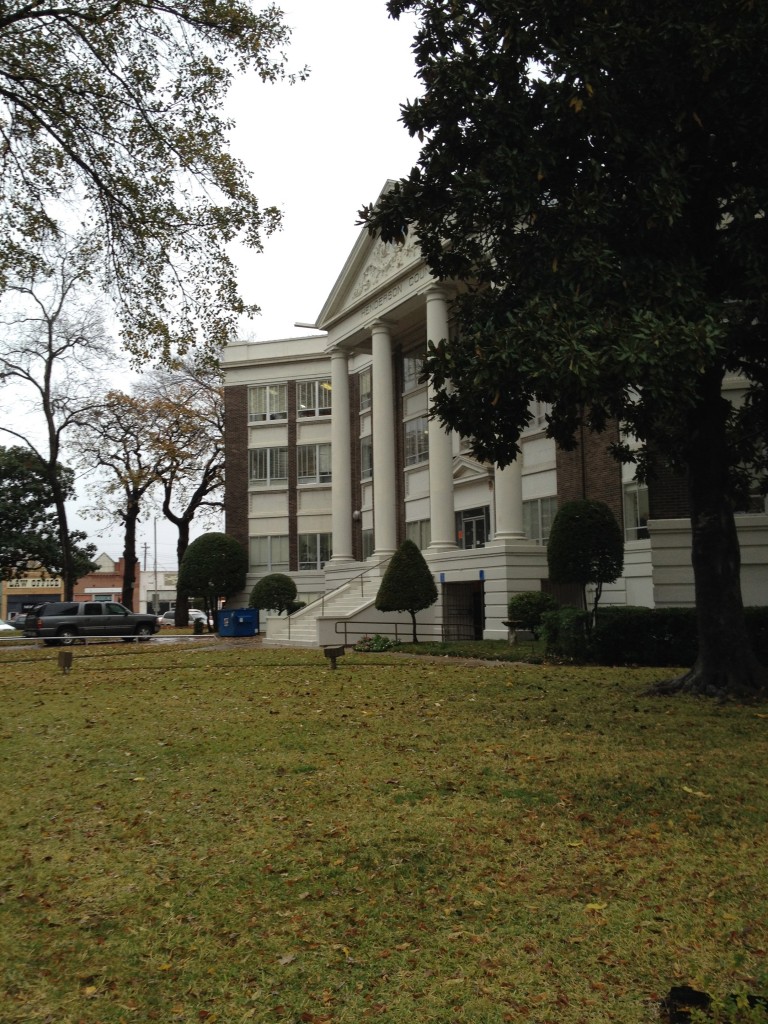 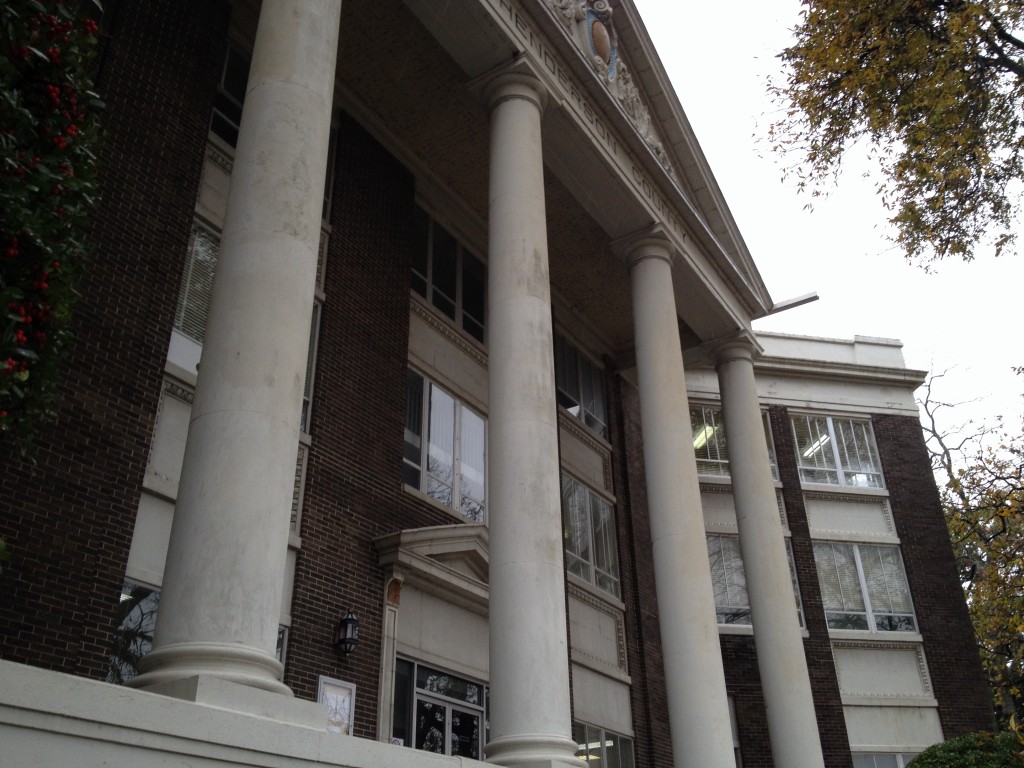 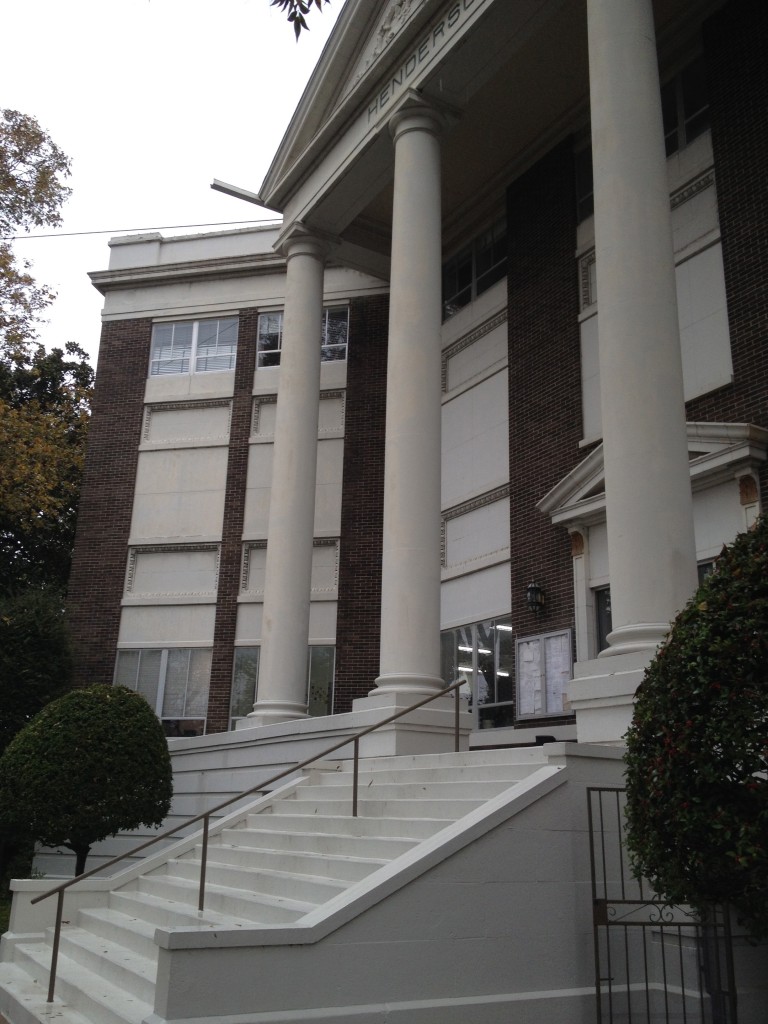 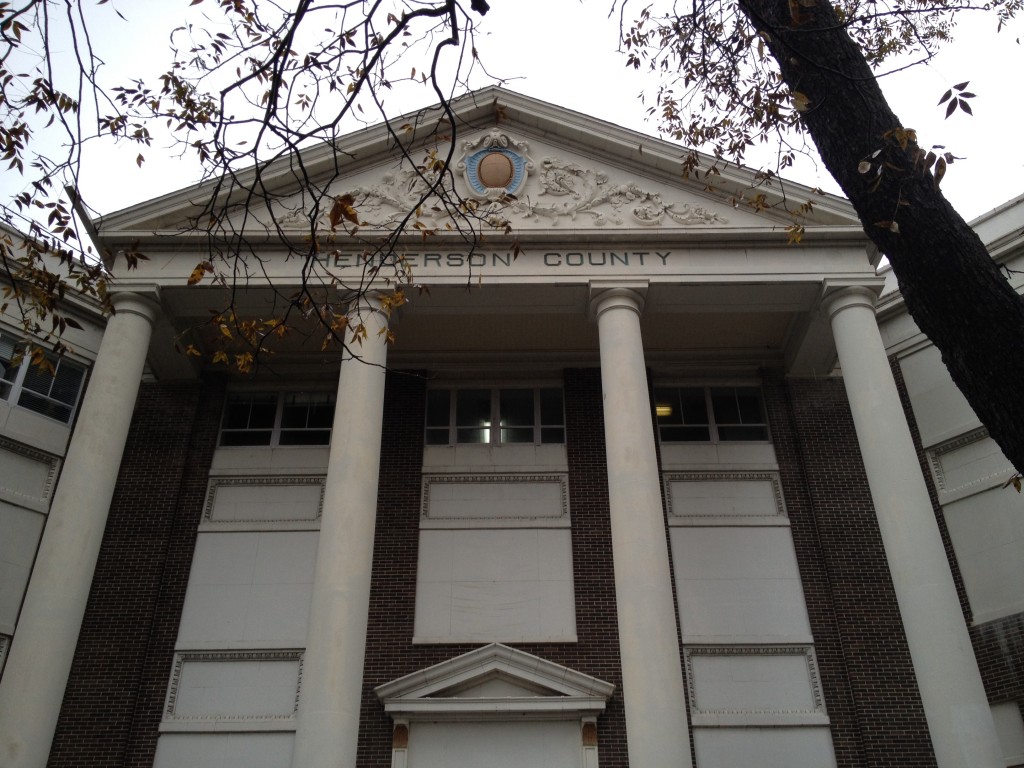 The pediment and Doric columns of the southern façade help add to that Ancient Greek style. 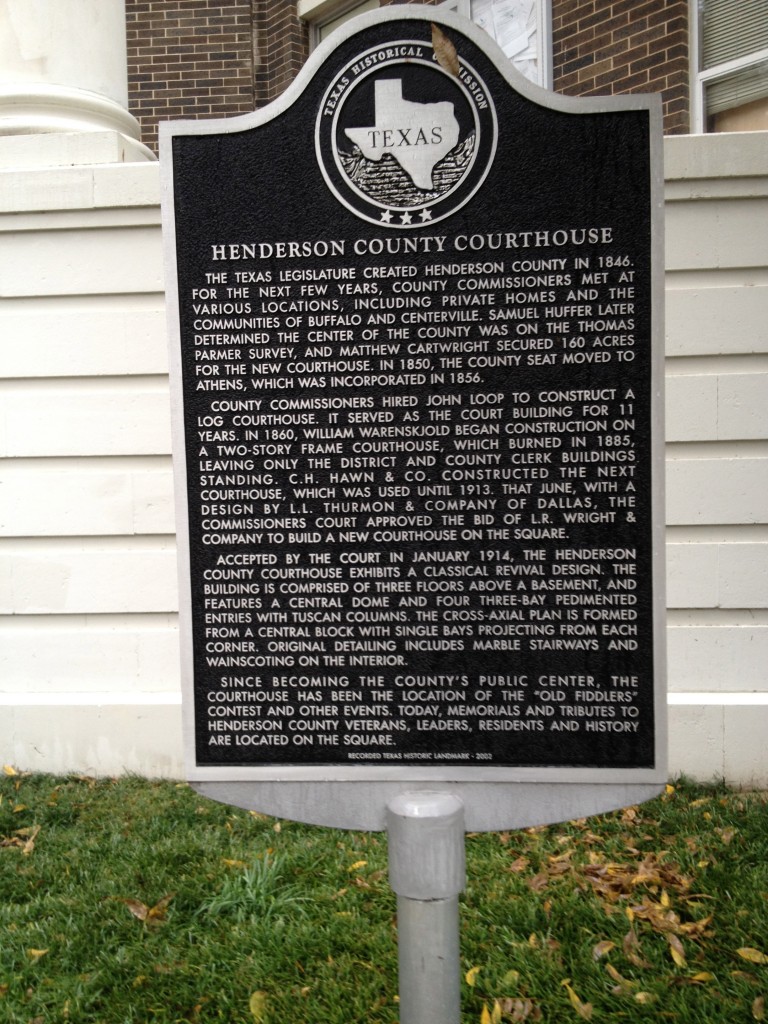 The courthouse does have a dome, though it’s hard to see from ground level. This picture was taken at the corner of Corsicana and Palestine Streets.

On the road in Henderson County, en route to Palestine