“With a total area of only 258.8 square miles, Rains County is one of the smallest counties in the state, and more than 10 percent of it has been under water since the construction of Lake Tawakoni and Lake Fork Reservoir. The soils are primarily a mixture of sand and clay. The Sabine River forms the southern border of the county, but most of the creeks drain northeast into the Lake Fork of the Sabine.”

“After 1850 most of the area that later became Rains County fell within the boundaries of Wood County, which was represented in the state Senate by Emory Rains, an early pioneer who had served in theCongress of the Republic of Texas. In 1866 Rains lobbied for the bill that established Rains County. On June 9, 1870, the legislature approved “an Act to create and provide for the organization of the County of Rains.”" 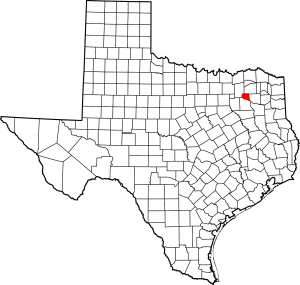 “The bulk of the new county was taken from Wood County. The western section, including the sites of the first settlements, came from Hunt County, and a narrow strip of land in the north was carved from Hopkins County. The act provided that the citizens should choose a county seat, to be named Emory. Springville, the largest and most centrally located community, was designated the temporary place of business for the five appointed commissioners and was later selected as the permanent county seat and renamed Emory.”

“Until at least the early 1880s, when rail service was first brought to Rains County, most of the inhabitants did their business in Mineola in adjoining Wood County. A log house in Emory was used initially as a temporary county courthouse. In 1872 a two-room wooden courthouse was erected. Seven years later the small building burned, along with all of the county records. The seat of government was moved back into the original log house until 1884, when a new brick courthouse was completed. In 1908 the courthouse was again destroyed by fire, but this time the records were saved.”

“About 1880 the Denison and Southeastern division of the Missouri, Kansas and Texas Railroad began construction of a line from Greenville to Mineola which passed northwest to southeast through Rains County. In addition to a station at Emory, the railroad established a flag station eight miles to the northwest. Residents of the area proposed the name Rice’s Point for the post office built there, but the name Point was adopted instead to avoid confusion with another post office. Point became the second-largest town in the county, which by 1887 had six merchants, five lawyers, and seven physicians.”

“The late nineteenth century was a time of unrest in many rural areas, as farm owners and tenants rebelled against what they believed were monopolistic practices of banks and railroads. The agrarian populist movement was especially strong in East Texas, and Rains County in particular. In the 1870s many farmers organized Granges, cooperative ventures aimed at bypassing the big-city middlemen. The following decade a national organization, the Farmers’ Alliance, attracted many local members.”

“Despite the grievances voiced by its small farmers, Rains County grew and prospered. The population was officially reckoned at 8,099 in 1920 and may have peaked at over 10,000 around 1925. The three population centers were still Emory, Point, and Ginger. Cotton production reached a peak of 8,291 bales in 1920 and remained high through 1931. The other staples—corn, oats, and hay—showed substantial increases as well. The 1920 harvest produced a third of a million bushels of corn and half that much of oats. Dairy cows were twice as numerous as the decade before, but other types of livestock were less.”

“World War II substantially depopulated Rains County. Between 1940 and 1950 the number of inhabitants fell from 7,334 to 4,266 as people found employment in war plants. This transformation was paralleled by the consolidation of small farms into larger ones and a shift to less labor-intensive forms of agriculture. The number of farms dropped from 1,132 to 814, while the number of beef cattle soared from 1,146 in 1940 to 8,198 in 1950. Cotton production continued its gradual decline, and the production of other crops except sweet potatoes fell off sharply.”

“The year 1960 was a turning point in Rains County history, due to the completion of Lake Tawakoni. In 1955 the City of Dallas and the Sabine River Authority had agreed to construct a dam across the Sabine River southwest of Emory in order to provide a supply of water to Dallas and to further the economic development of the region. Lake Tawakoni, which is impounded by Iron Bridge Dam, has a surface area of 36,700 acres and a storage capacity of 936,200 acre-feet. The economic benefits it brought to Rains County accrued slowly but steadily.”

“Lake Tawakoni reversed Rains County’s downward trend in population. The number of inhabitants grew steadily from 2,993 in 1960 to 3,752 in 1970 and to 4,839 in 1980. The new residents were predominantly white; the number of blacks in the county dropped from 306 to 270 over the same twenty-year period. Manufacturing returned to the county in the 1970s. By the end of the decade there were seven firms employing a total of 200 people with a payroll of $1.5 million. Although Rains County was bypassed by the interstate highway system, it did acquire a small general airport southwest of Emory in the early 1970s.”

“Emory (population, 1,226), the county’s seat of government, was its largest town. Other communities include Point (811) and East Tawakoni (876). Recreation in Rains County revolves around its two large reservoirs. Farm Road 47, which runs south from Point and skirts Iron Bridge Dam, has been designated part of the Texas Lakes Trail. There are public boat ramps and other facilities at both Lake Tawakoni and Lake Fork Reservoir. In 2004 the county began to host an annual bass fishing and golf tournament in September.” 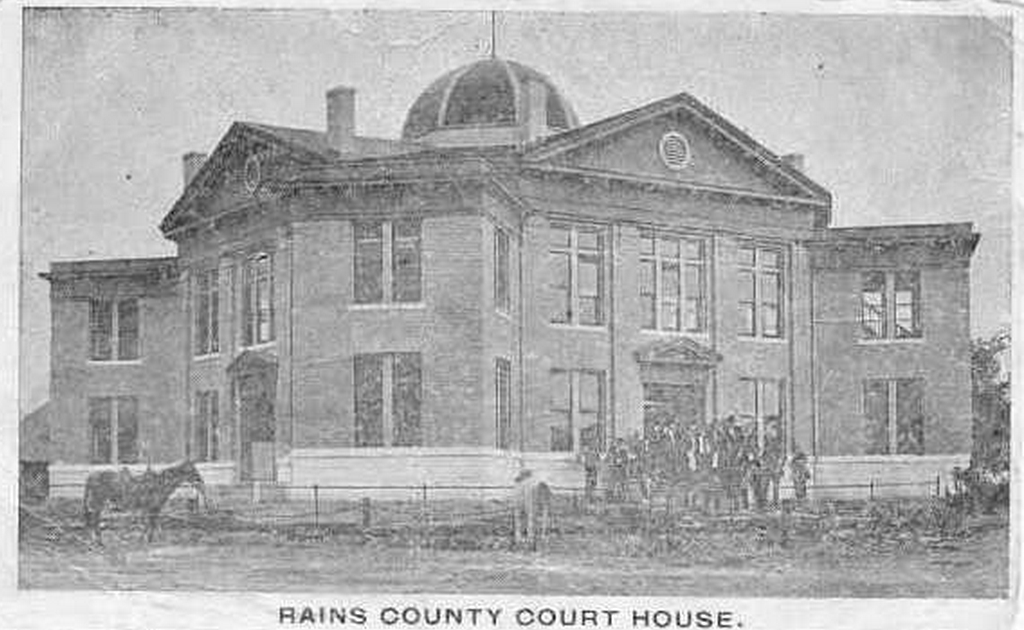 “The first courthouse, a temporary log structure, served the county for nearly two years, when a two-room building was constructed. It and all the records housed within it burned in 1879, and the county returned to the log structure until a two-story, red brick courthouse was completed in 1884. It was gutted by fire in 1908, but the steel vault containing county records survived the fire. The Bryan Architectural Company of St. Louis, Missouri was selected to design a new courthouse, built around the steel vault still in its original location.”

The Bryan Company was aided in the process by the Falls City Construction Company from Louisville, Kentucky. Ginger brick was used to build the courthouse, manufactured by the Fraser Brick Company in Ginger three miles away. The unique, cruciform layout plan in which the building’s wings protrude at angles was also a signature of the original Fisher County courthouse (also designed by the Bryan Company).

Throughout history, records indicate that the courthouse and its grounds have long been utilized for social gatherings, most historically significant of which included political speeches from House Speaker Sam Rayburn and President Lyndon Johnson. 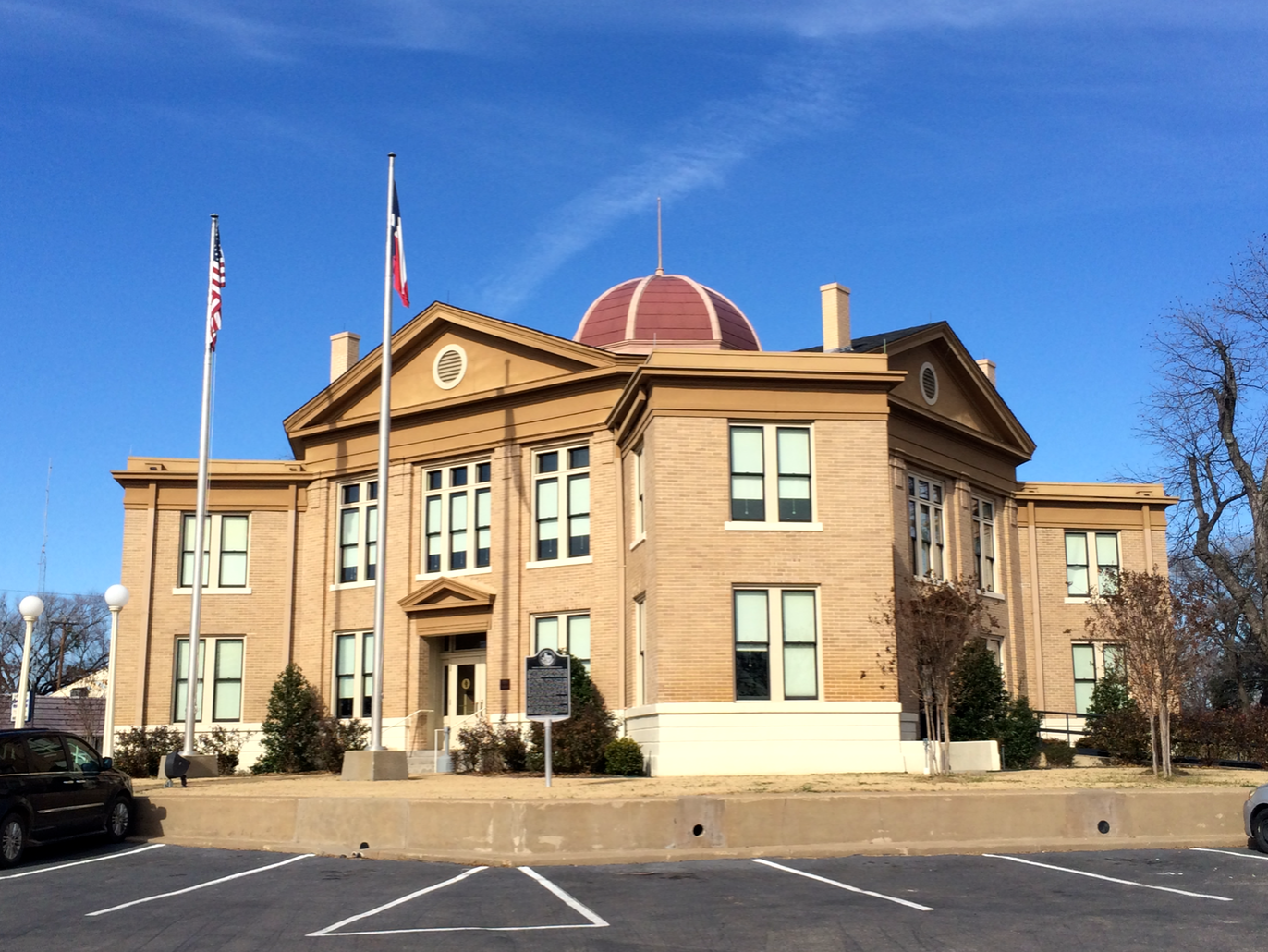 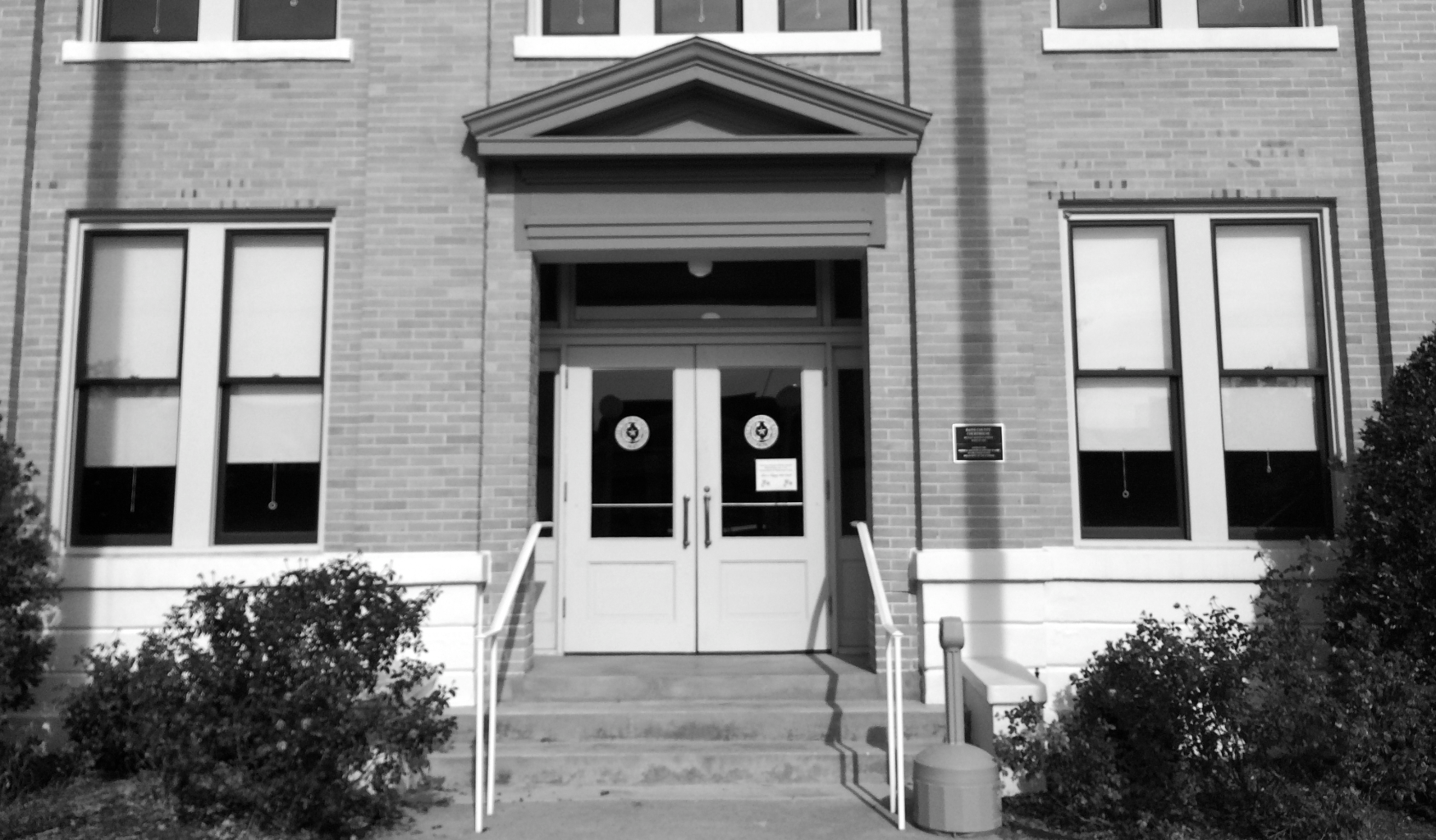 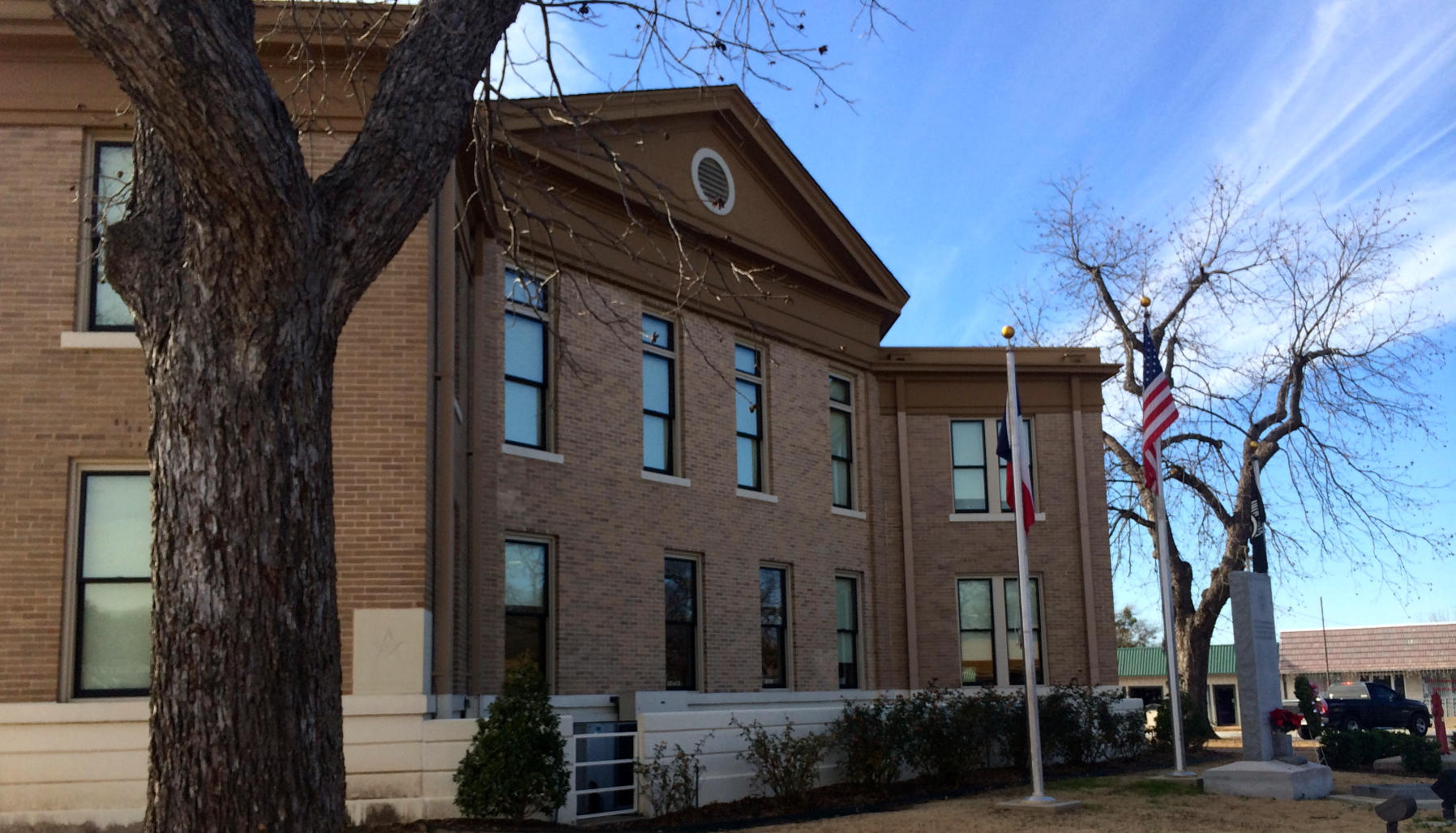 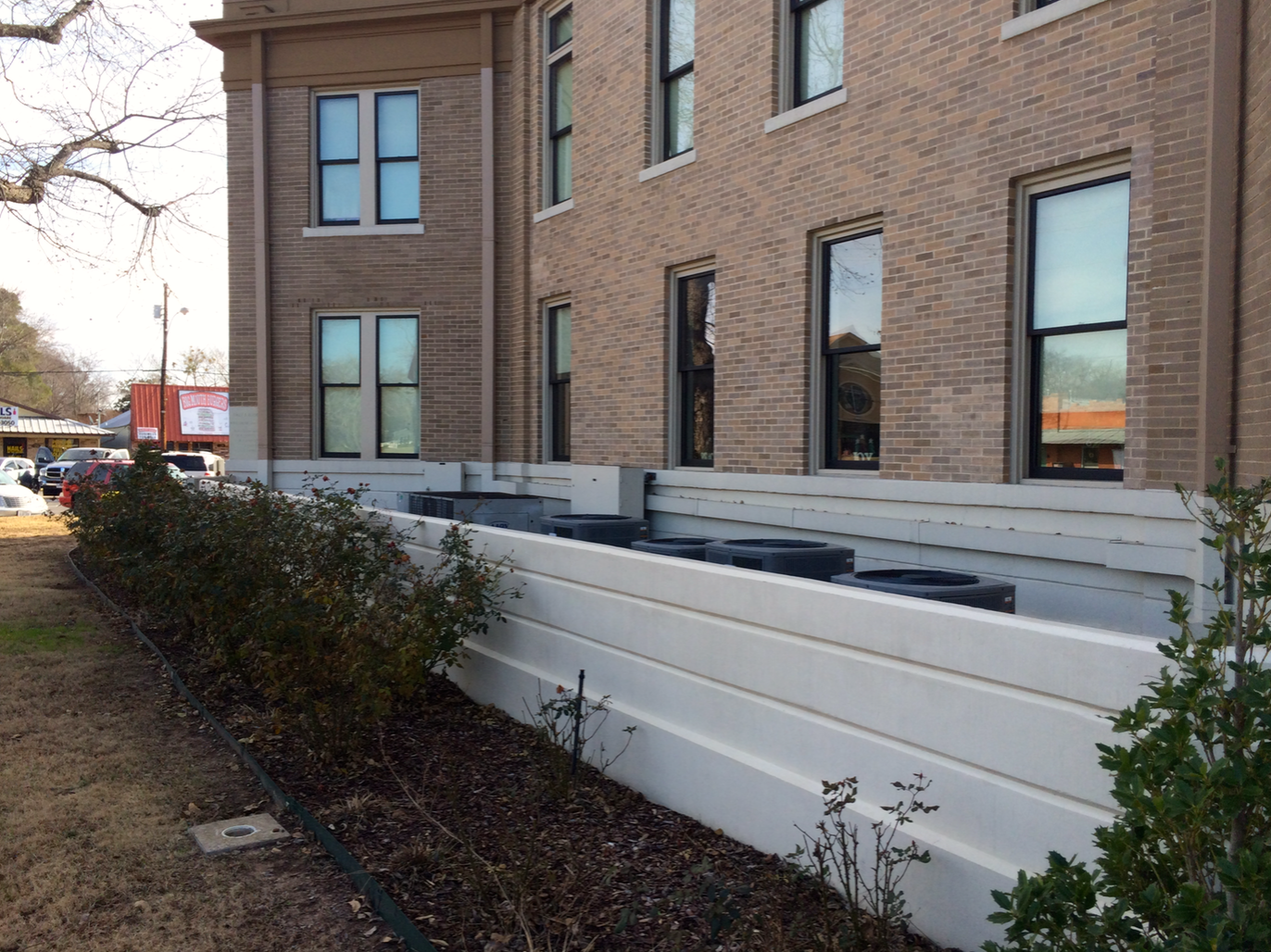 Courthouse air conditioners are housed behind a small wall along this façade. 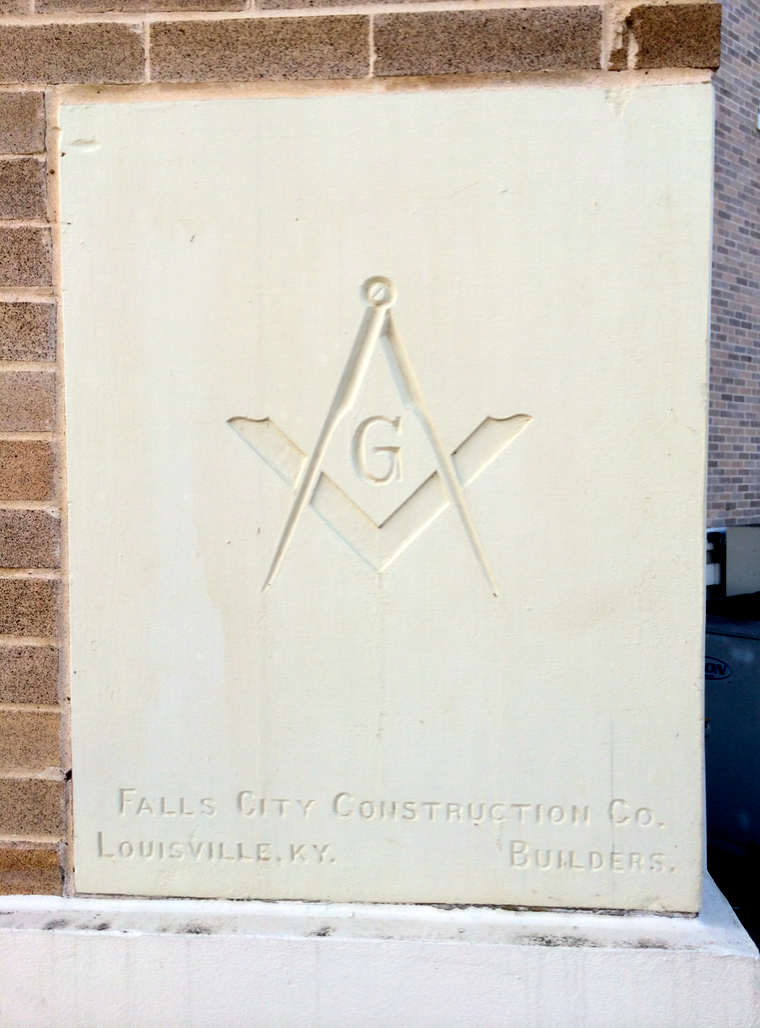 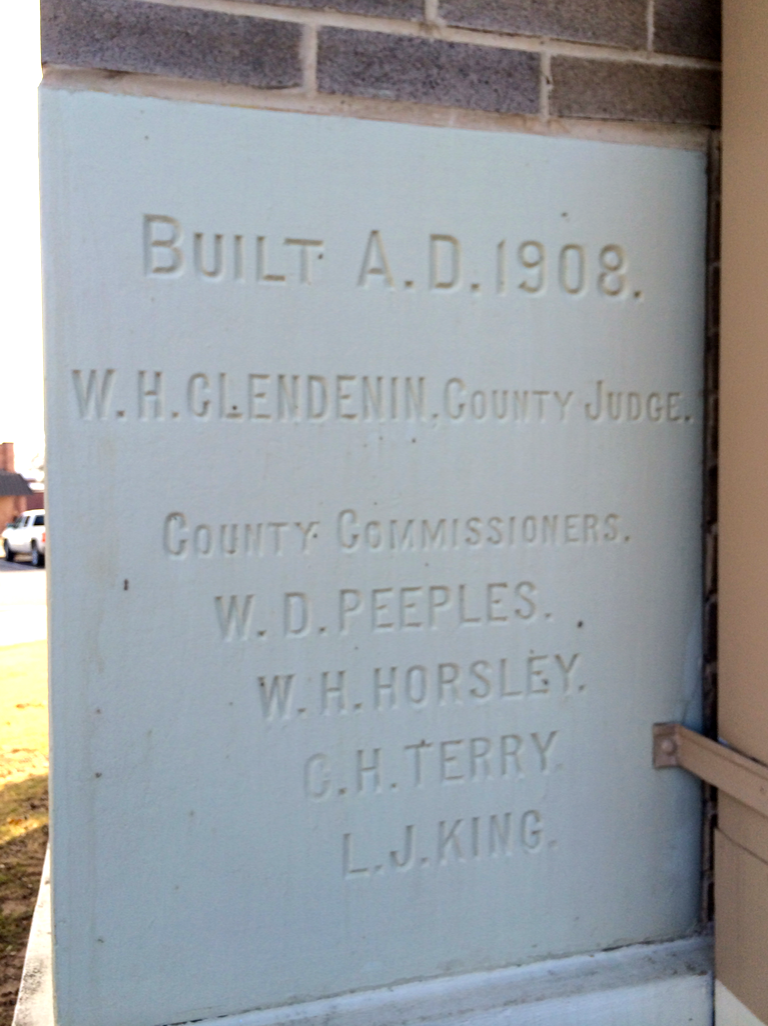 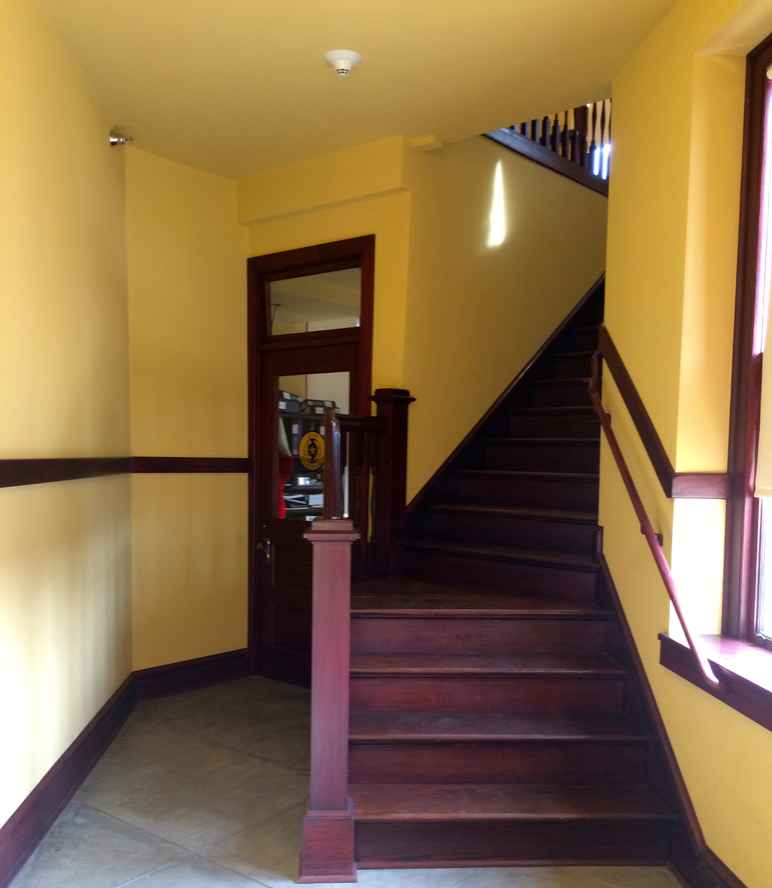 The view from the northwest entrance, on Texas Street

County offices are located northeast of the courthouse on North Street. 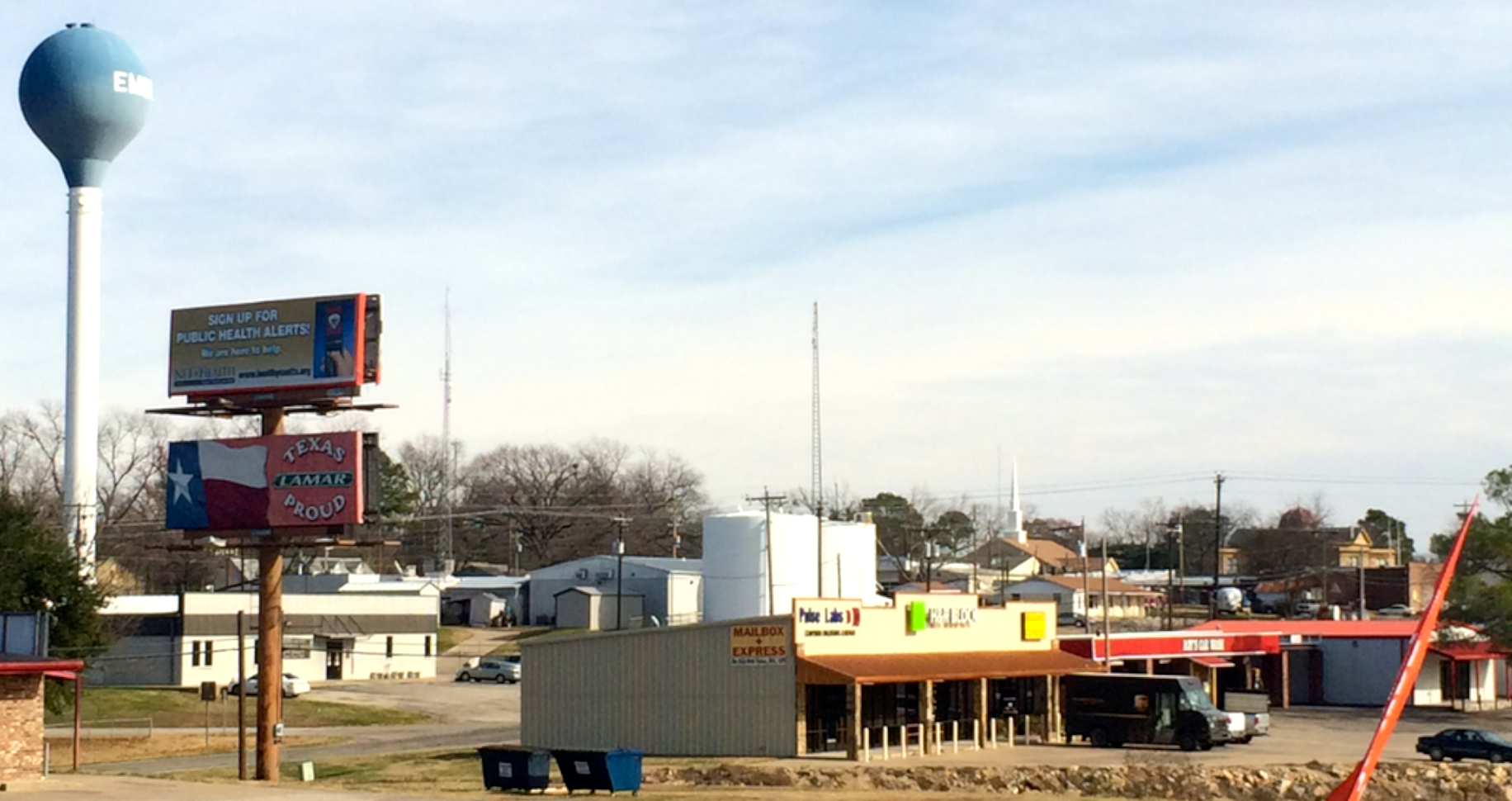