“Rockwall County is the smallest county in Texas. Its 147 square miles of flat, undulating, and gently rolling prairie ranges in elevation from 390 to 620 feet above sea level. The almost square county has three distinct topographic divisions: the valley of the East Fork of the Trinity River; a small area of gently undulating to steeply sloping terraces west of the valley; and rolling uplands east of the valley, which cover 80 percent of the county.”

“The National Road of the Republic of Texas was surveyed and constructed in the mid-1840s through the area that would become Rockwall County. Running northeast from the Dallas area to the Red River, the road was a major route for settlers traveling to Peters colony near the site of present-day Dallas. In 1846 the first settler, John O. Heath, received a grant from the Mercer colony and established his home on the East Fork of the Trinity River near the crossing of the Central National Road. Occasionally when the swollen waters of the Trinity River prevented crossing, some families simply settled along the east bank of the river. The towns of Heath and Rockwall were thus founded along the highway.”

“Several farmers were digging a well in 1851 when they discovered a subterranean rock wall or diker that crossed the county and occasionally appeared at ground level. Although scientific analysis indicated that the wall is a natural geological formation, folk tales persist that it was built by prehistoric natives. When it was surveyed and laid out in 1854 the town of Rockwall was named for the curious rock formation.”

“In 1836 the area was established as part of Nacogdoches County, and when Texas joined the Union in 1845, it was included in Henderson County. Kaufman County was formed in 1847, and the region now known as Rockwall County was placed in the jurisdiction of the new county. In 1873, because the county seat, Kaufman, was inconvenient for the residents of the northern panhandle, Rockwall County was formed, taking its name from the town and geological formation. Rockwall was the first county seat and continues to hold that position, although in 1892 there was an unsuccessful attempt to make Fate the county seat. In 1873 Rockwall was incorporated.”

“When the Texas and Pacific Railway was built through Kaufman County in 1873, much of the agricultural produce of Rockwall County was taken there for shipment. The combination of better transportation, a cotton gin built in 1866, and fertile land encouraged farmers to produce cotton on a large scale. The Missouri, Kansas and Texas Railroad built through the county in 1886 and gave impetus to settlement. By 1890 there were 5,972 residents in the county. The 50 percent increase in population from 1880 was composed almost entirely of white Americans. African Americans, the only other significant racial group, comprised only 3 to 5 percent of the total.”

“The Great Depression left 15 percent of the available workers with relief jobs or in search of work in 1940. Through the agency of the Work Projects Administration, a new courthouse was constructed to replace the old one built in 1893. The population in the county fluctuated between 8,000 and 8,500 during the first decades of the new century. Throughout this time, though, there was a steady decrease in the number of white citizens. The black population, largely rural, steadily increased in actual numbers and in the percentage of the total population.”

“The economic structure of the area was altered in 1940 because of the great number of workers commuting to industrial jobs in Dallas. It was estimated that in 1948 one-third of the labor force living in Rockwall County was employed in Dallas. The county continued to show a decline in population, with a total of 7,071 residents reported in the 1940 census. Further decline occurred during World War II, when 1,233 persons left to serve in the armed forces or obtain work in industry.”

“In 1955 52 percent of the residents were considered non-farm rural. A few manufacturing plants were established, including garment, leather goods, and aluminum processing factories. Other nonagricultural income came from rail and highway commerce. The city of Rockwall, with 2,166 residents in 1960, had a seed-cleaning plant and feed mill and was a commercial center for the thickly settled farming region. Royse City, in the northeastern part of the county, was a shipping point for cotton and other agricultural products.”

“The years between 1960 and the late 1980s saw impressive changes in Rockwall County, as it became more a part of the greater Dallas metropolitan area and less a small rural county. This trend had begun years earlier, during the depression and World War II, but was greatly influenced by several major developments. The first of these was the completion of Interstate Highway 30 in the late 1950s. This highway, which enters the county midway on its western border with Dallas County and passes by Rockwall and Royse City to exit in the northeastern corner, provides easy access to Dallas and facilitates shipping into and out of the county.”

“The population grew accordingly. In 1970 7,046 people lived in the county. Rockwall County ranked thirty-third among all United States counties in growth rate for the years between 1970 and 1980. In 1990 the population reached 25,604. Many of the new residents commuted to Dallas, and many were financially well off. In 1999 Rockwall County’s median household income was $65,164, ranking it second among Texas counties.”

“Most of the people in the county lived in either Rockwall (population, 41,147), the county’s seat of government; Royse City (10,338); Heath (7,704); or McLendon Chisholm (1,672). Rockwall County’s proximity to Dallas and the lure of its large, peaceful homes near the lake have made it a growing suburban county. Royse City hosts a Funfest in April and is home to the North Texas Speedway.”

I was the guest of Rockwall and Rockwall County on December 30, 2013. 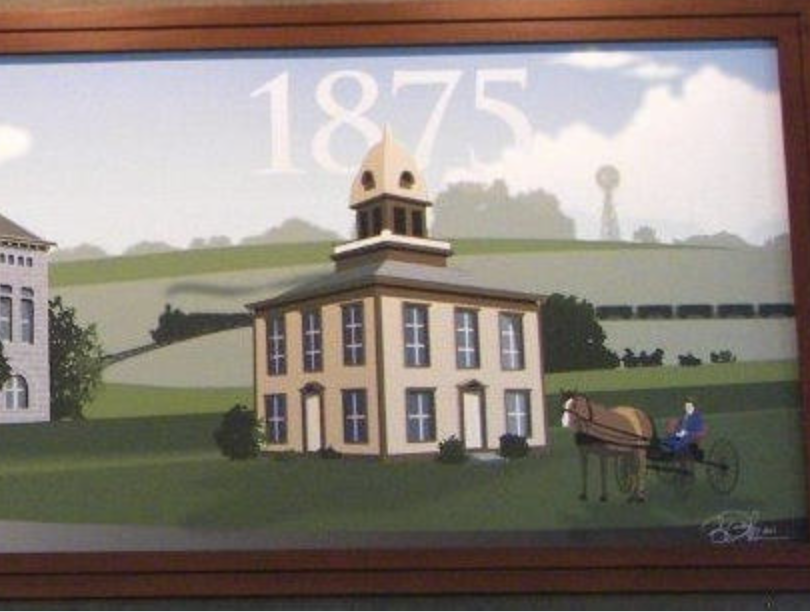 The county’s first courthouse was an Italianate work of Dallas architect James Edward Flanders. This happened to be one of his earliest courthouse designs; he would go on to craft several more across Texas in the last quarter of the nineteenth century.

Unfortunately, a fire destroyed this charming little courthouse on January 27, 1891. The chances are, however, that had that not happened, the county would have demolished it by the 1910s. There was no way county business could sufficiently fit in a building that small. 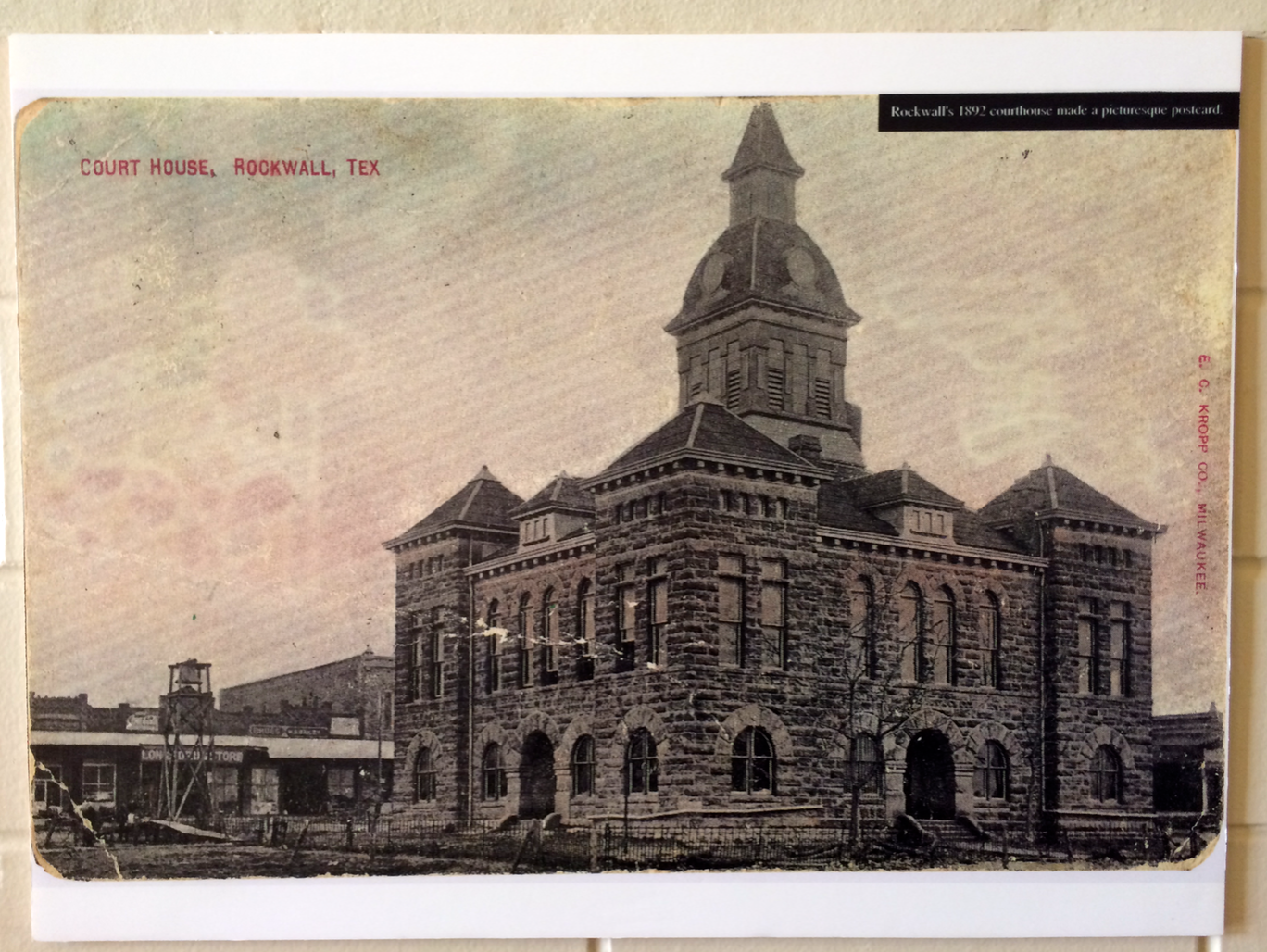 To replace the original courthouse came a massive, imposing work of Maximilian A. Orlopp. The towering Richardsonian Romanesque building cost the county $25,000 and was the “sister building” of the equally impressive Dallas County courthouse, one county to the west. Whether for a cited need for a more modern building or to provide work during the Depression, the county ordered a demolition crew to bring it down in 1938. 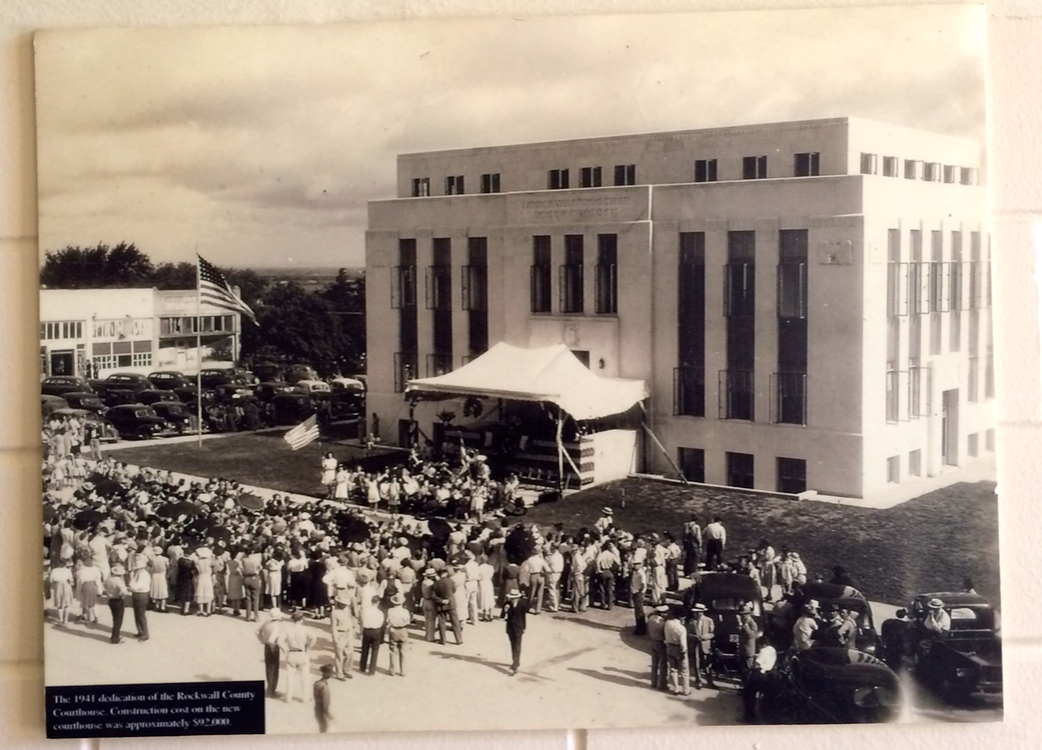 After the Orlopp building met its end, the county hired renowned Moderne architects, Voelcker and Dixon to design a new structure. The Works Progress Administration provided the construction workers, who were supervised by Carl Miller. 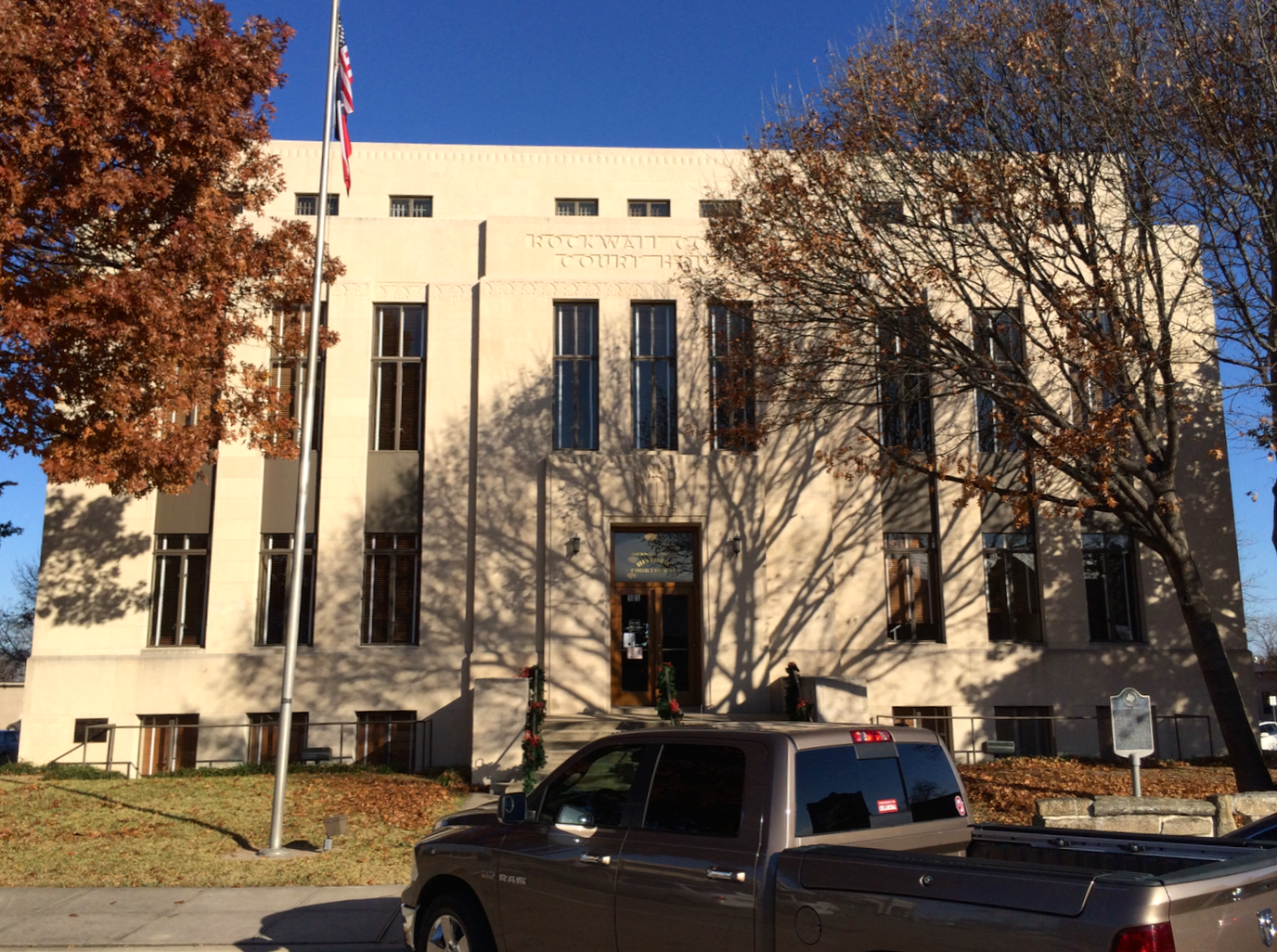 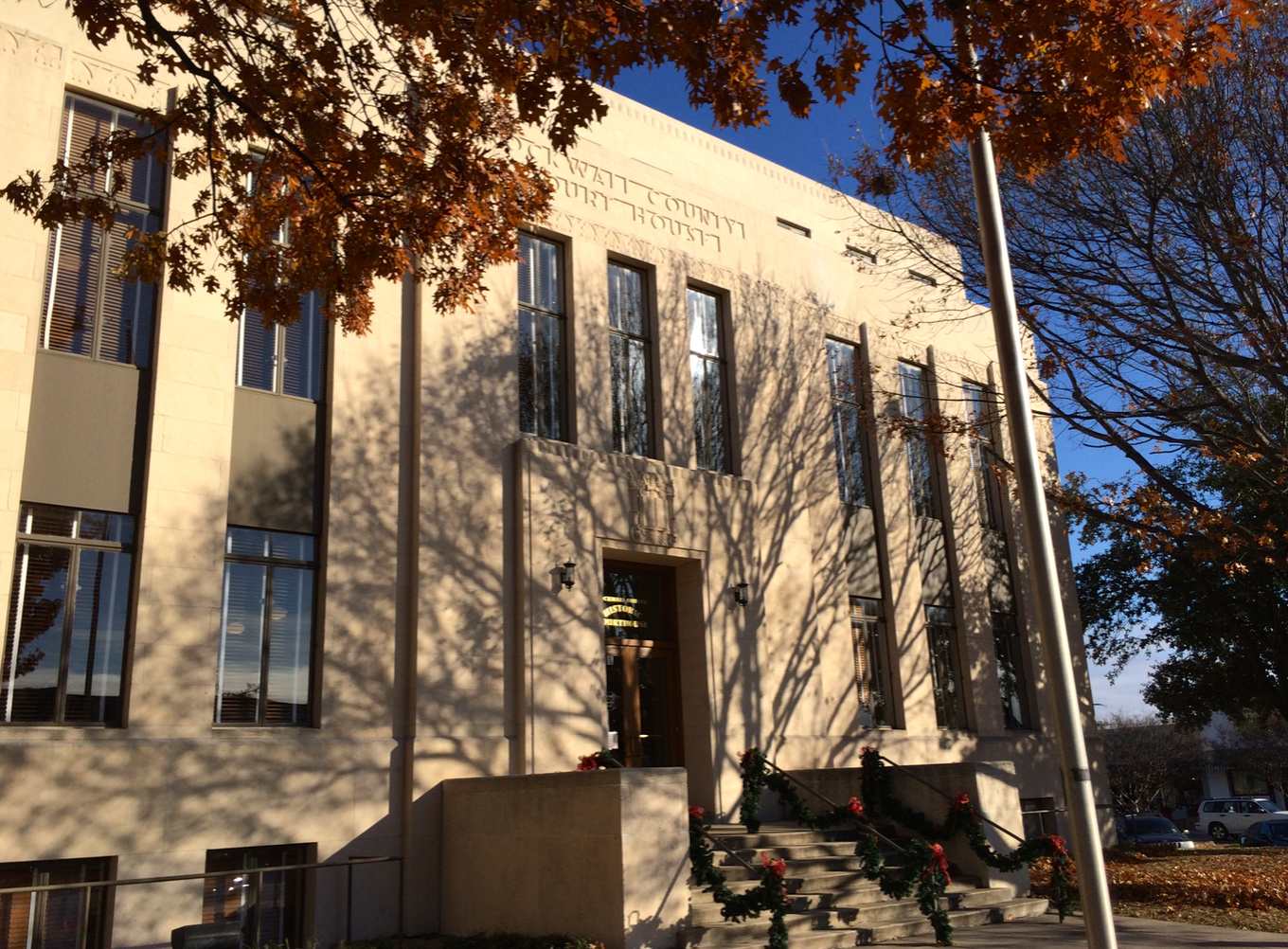 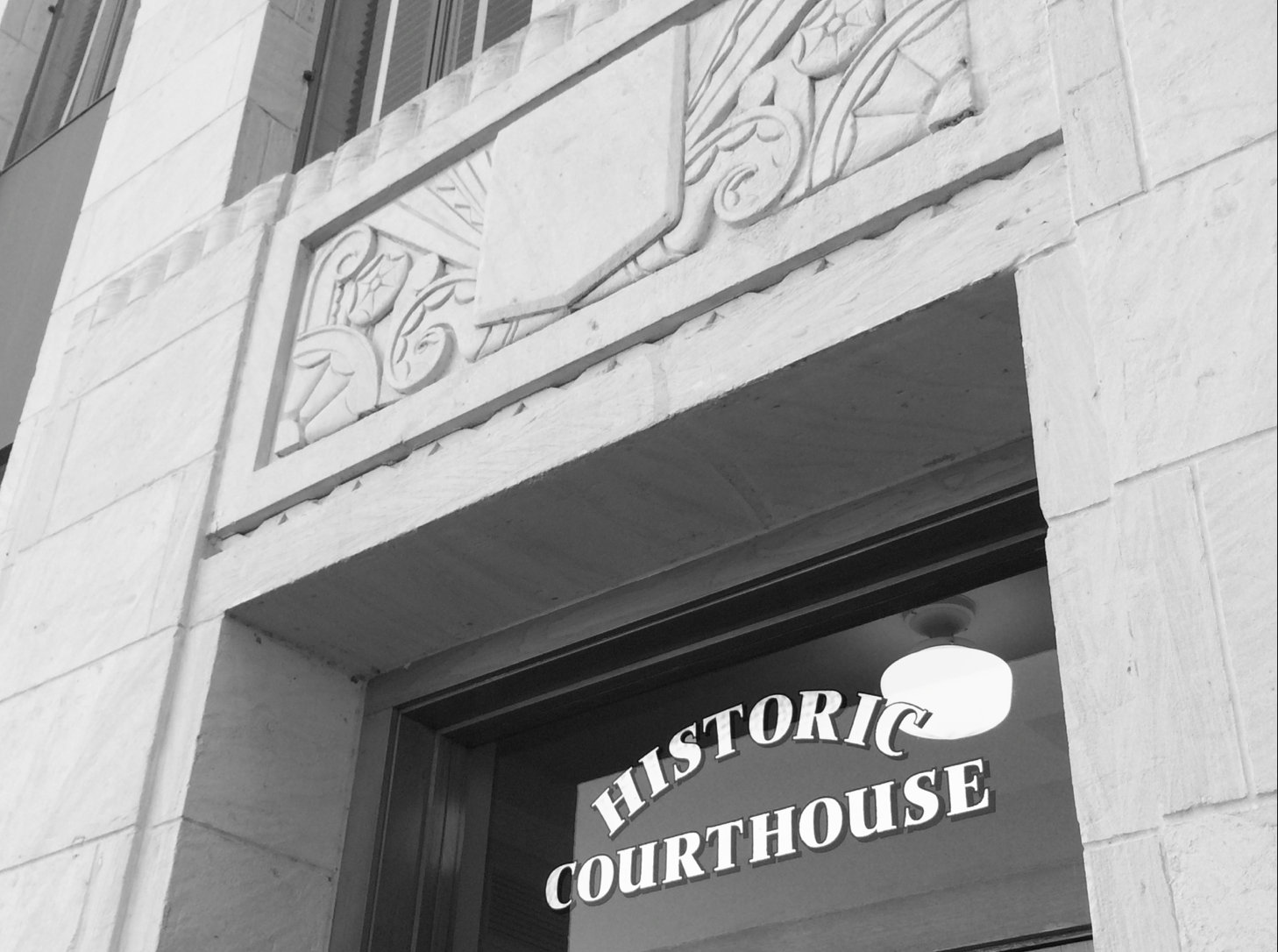 In today’s Rockwall, this building happens to be the historic courthouse. A much larger, much newer structure is just off the Interstate, south of downtown. 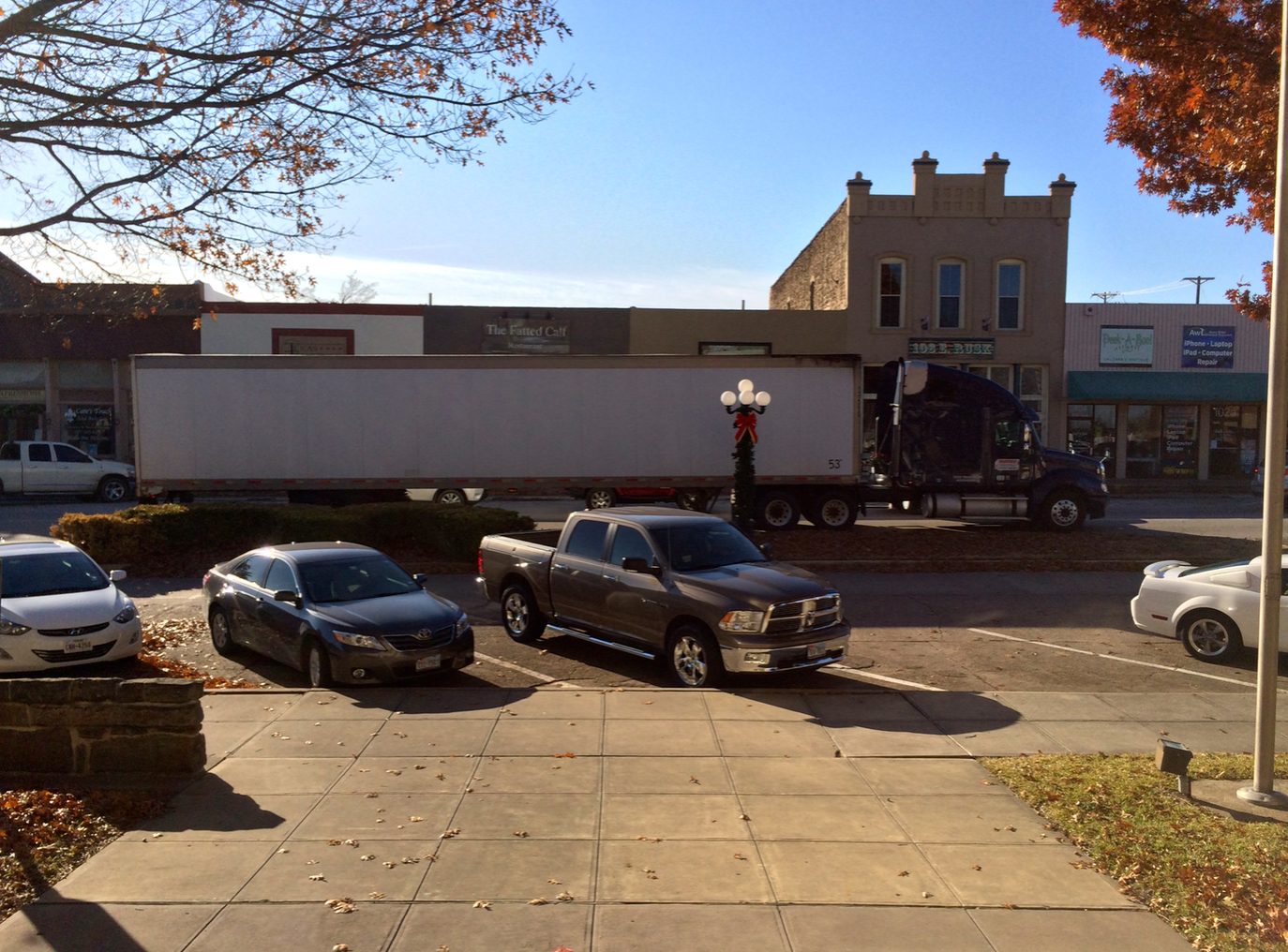 The view of Rusk Street from the southern entrance 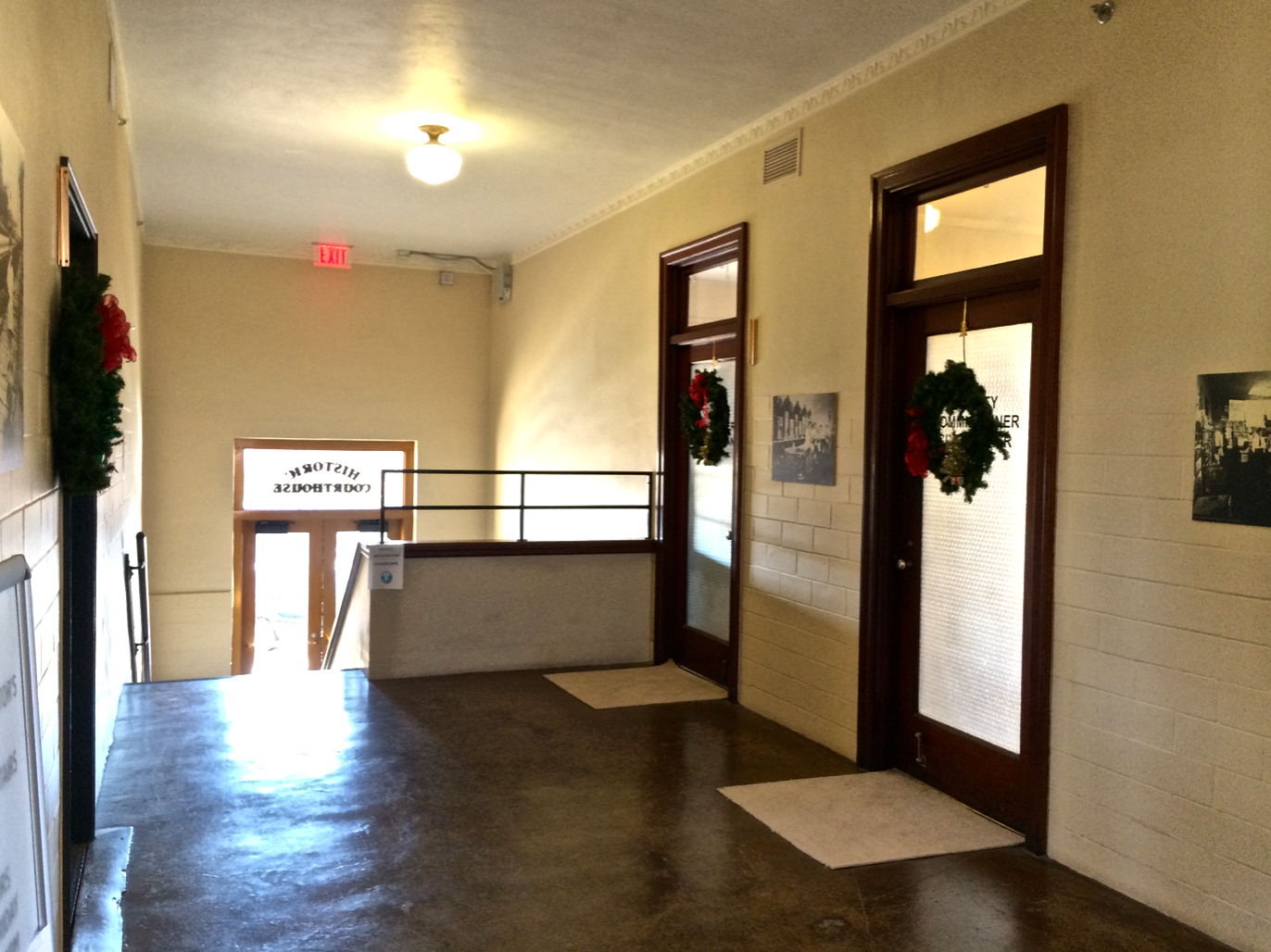 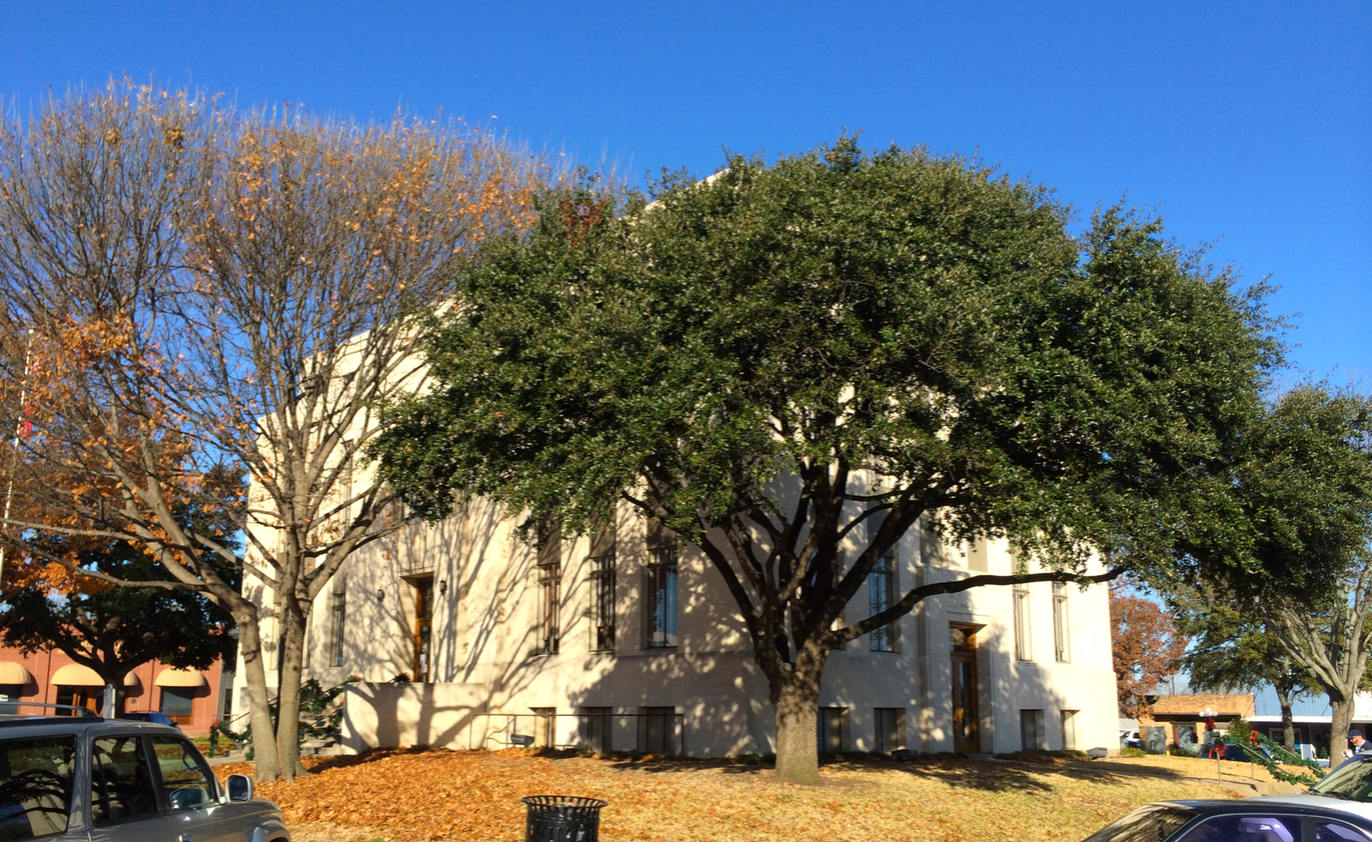 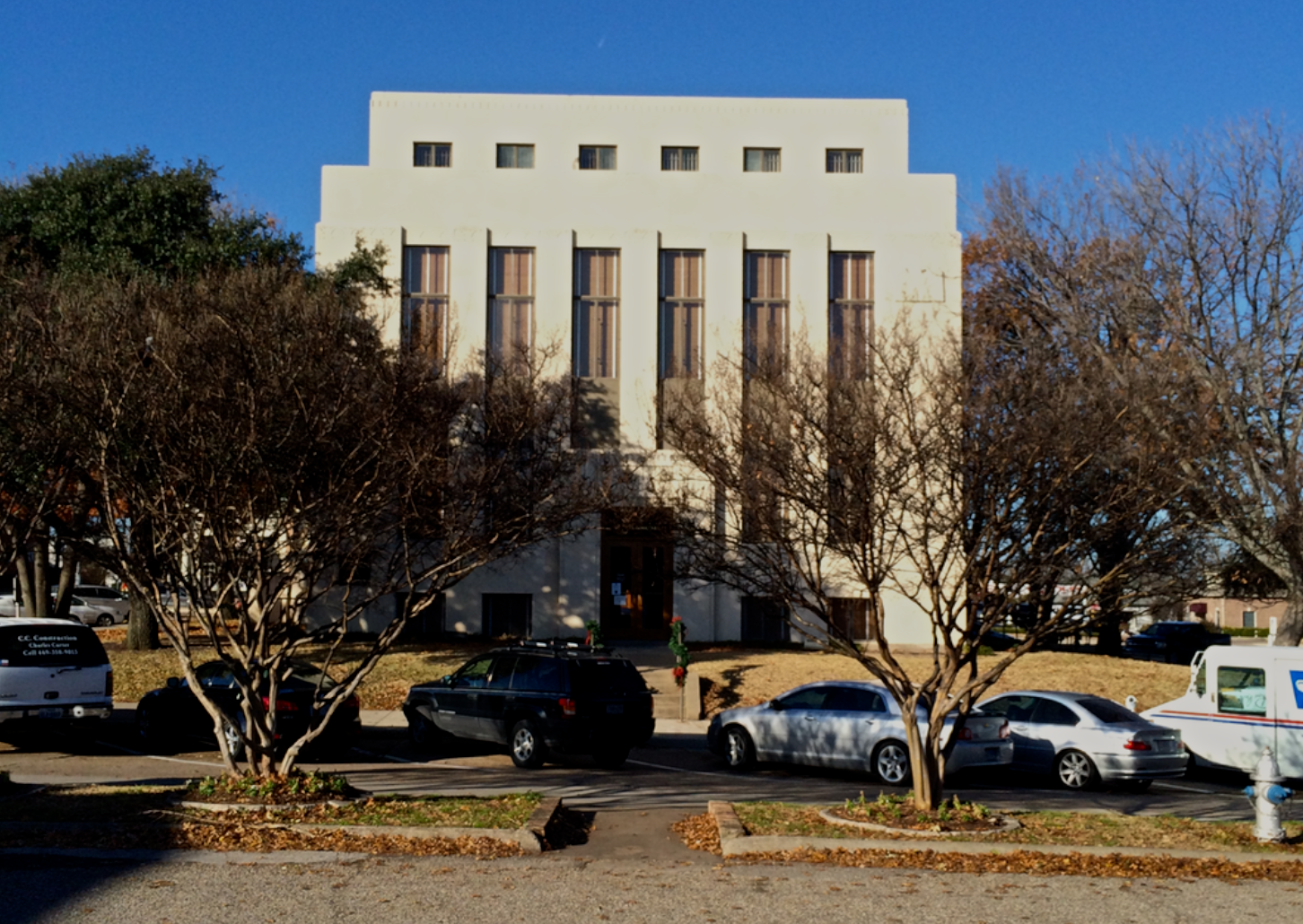 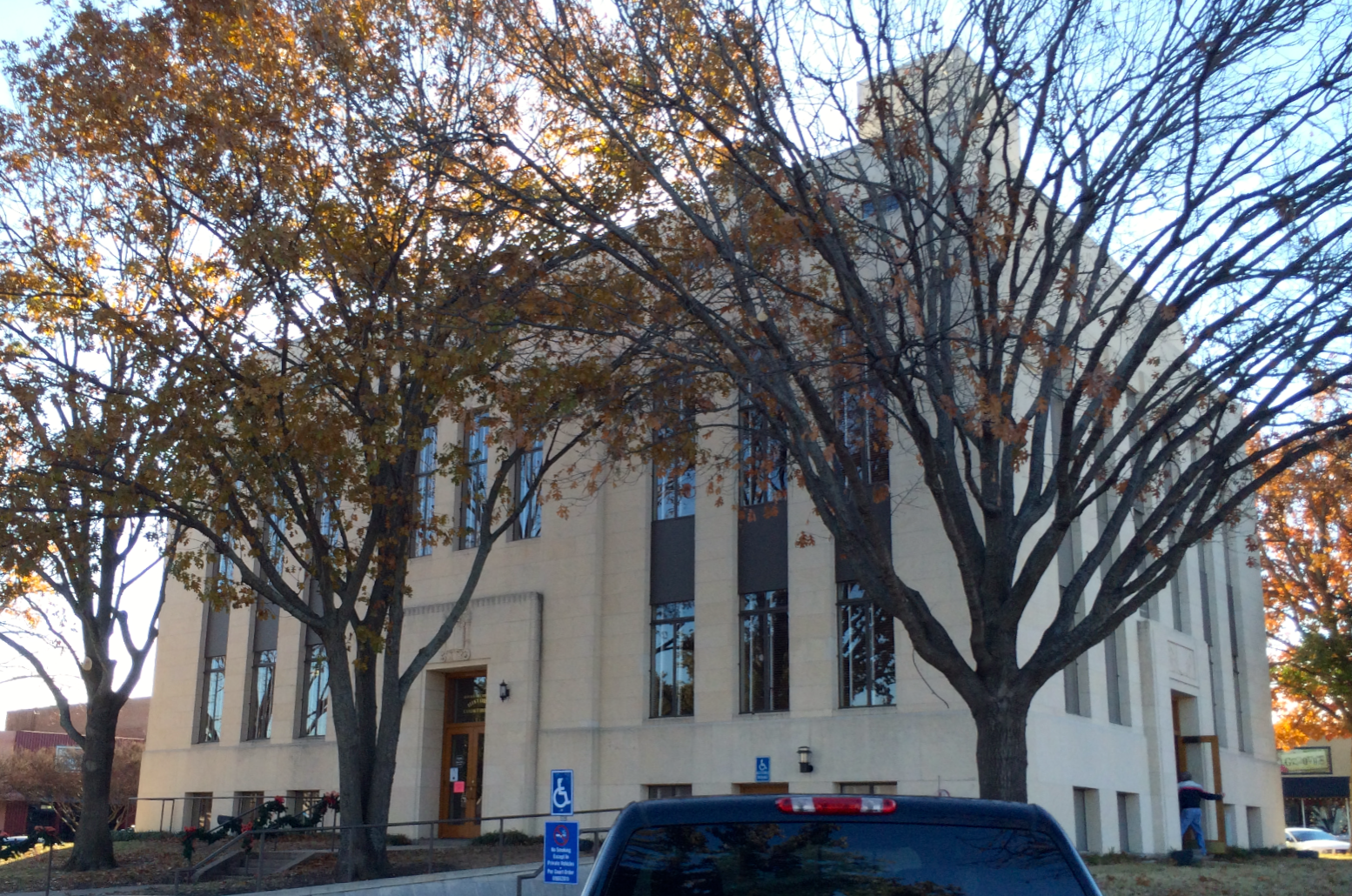 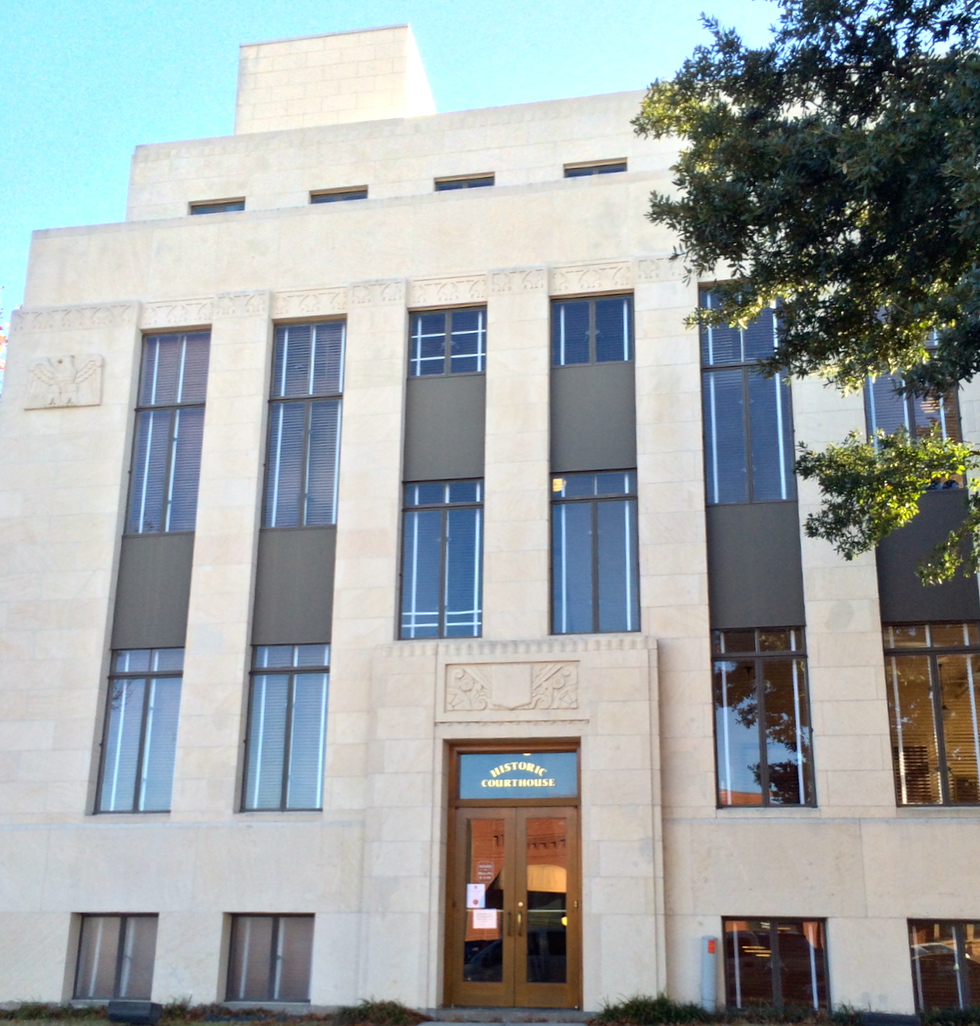 The western façade, on Goliad Street 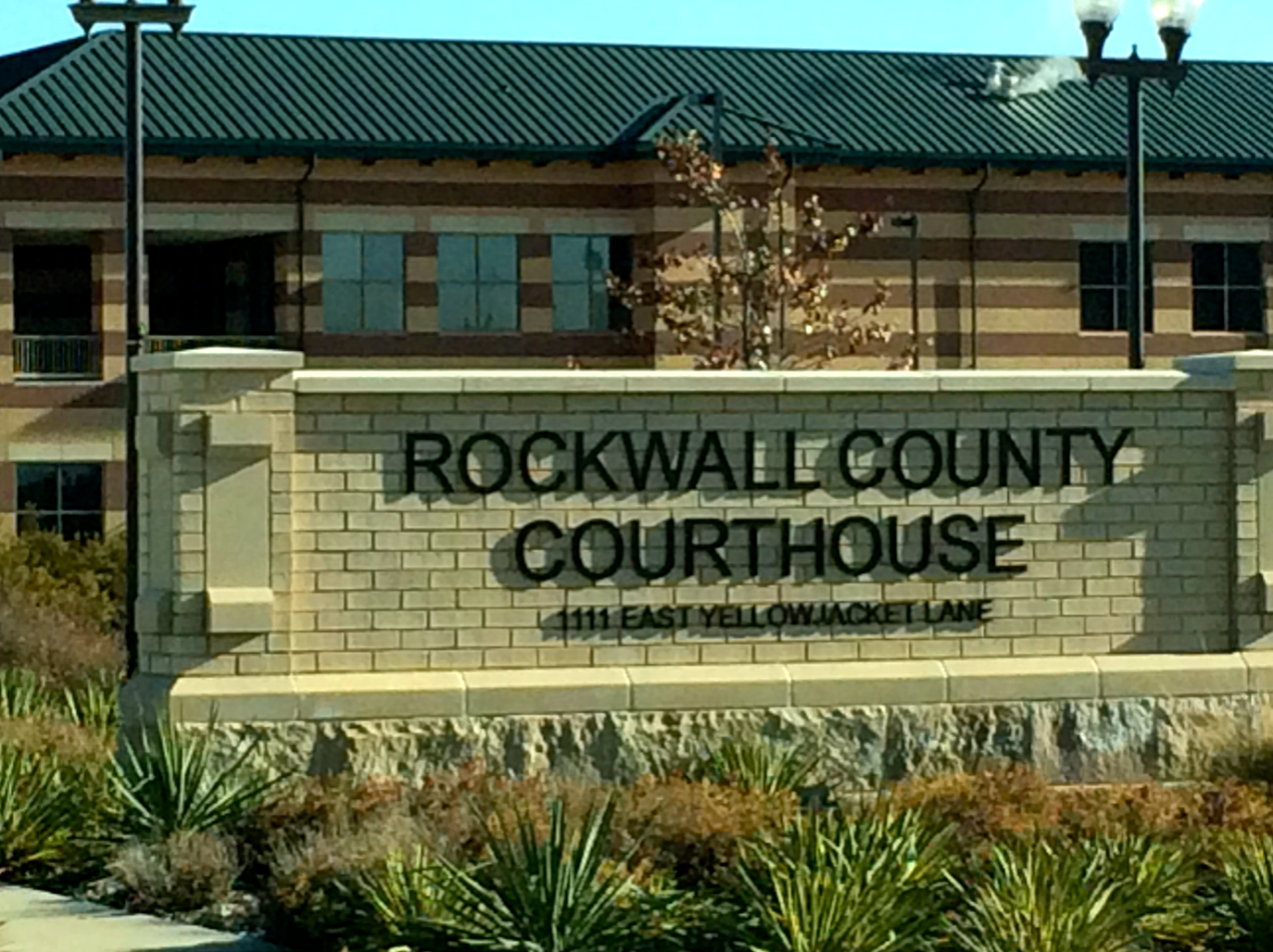 The newest courthouse in Rockwall County is located at 1111 East Yellow Jacket Lane, south of the historic building. 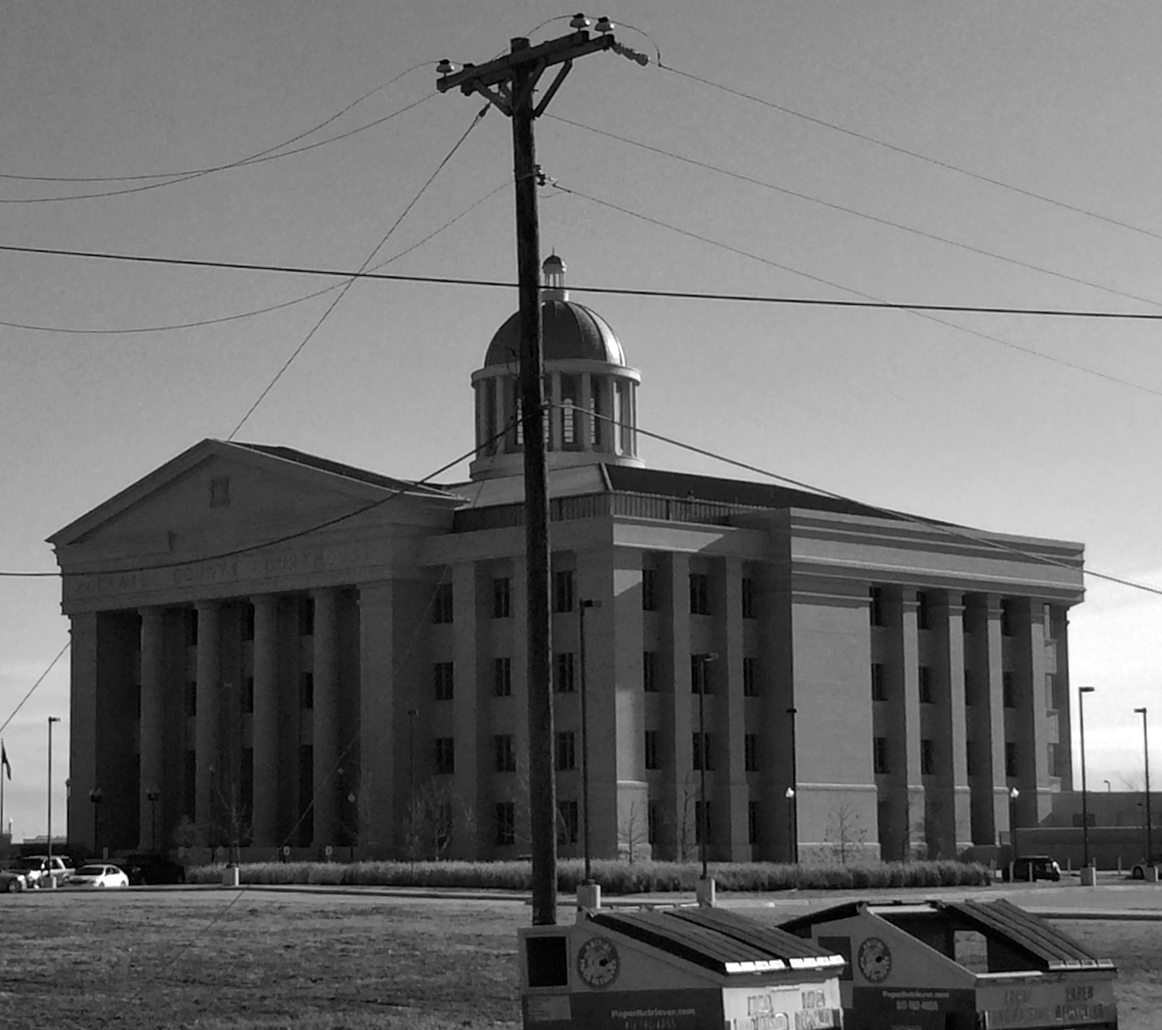 It was built in 2011 by Manhattan Construction Company. The design is Brinkley Sargent’s. 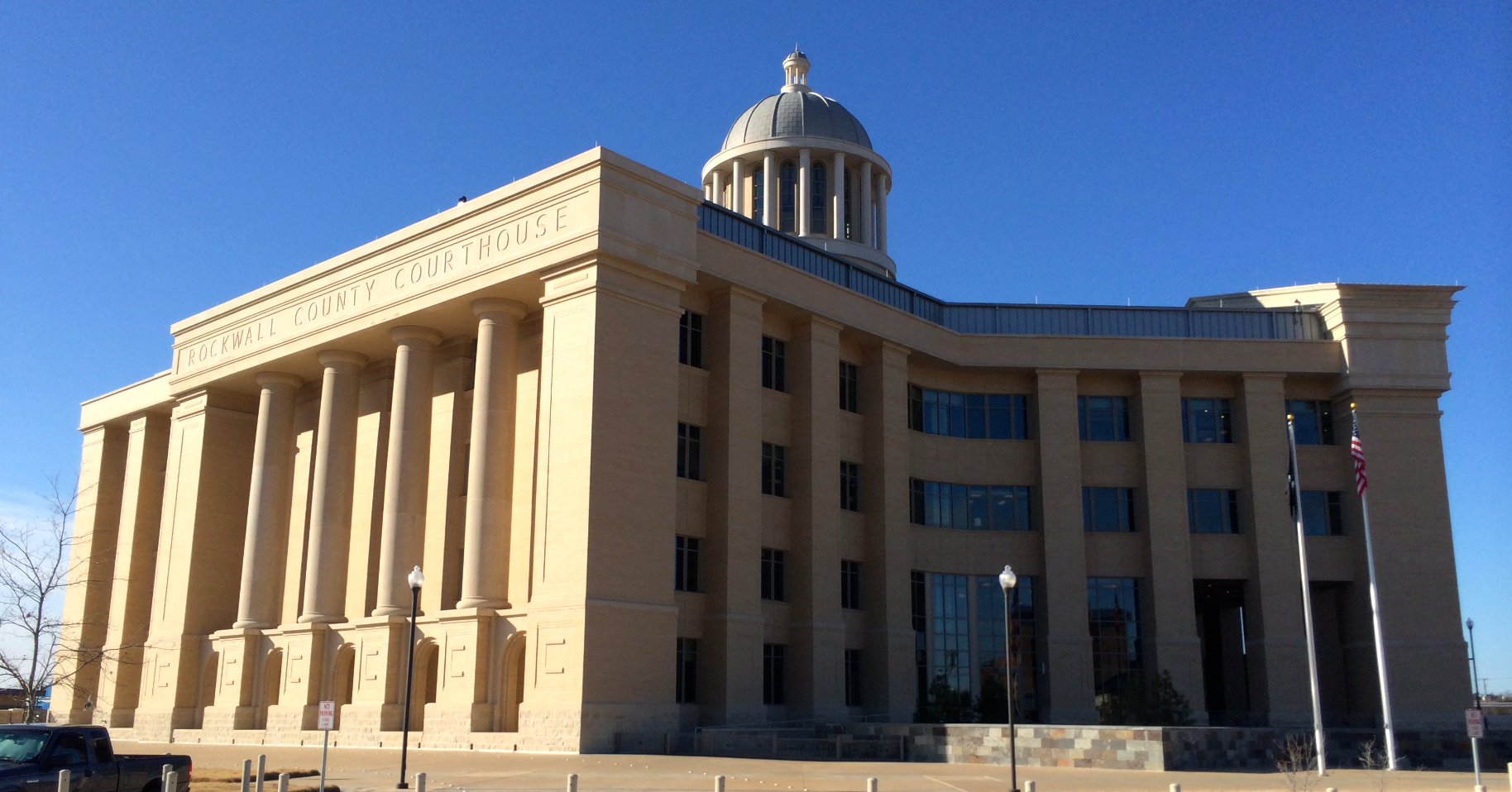