“Taylor County covers 917 square miles of prairie covered by grasses, with some mesquite and live oak trees. The loamy surface soils are reddish to brownish, while the clayey subsoils often include lime accumulations; altitudes range from 1,672 to 2,410 feet above sea level. Taylor County is traversed from east to west by the Callahan Divide, a line of hills separating the Brazos River and the Colorado River watersheds. Lake Abilene, Kirby Lake, Lytle Lake, and Fort Phantom Hill Reservoir provide water and recreation.”

“Comanches of the Penateka band led the advance into the region in the eighteenth century. In 1858 the Texas legislature established Taylor County, named for Alamo defenders Edward, James, and George Taylor, from lands formerly assigned to Bexar and Travis counties. Taylor County was attached to Travis and Bexar counties for judicial and administrative purposes until 1873, when these responsibilities were assigned to Eastland County. Partly due to the presence of Indians, the area remained largely unsettled. The Penatekas maintained their independence until the 1870s, when, after much bloodshed, they were defeated by the United States Army. The earliest group of European settlers in Taylor County were buffalo hunters and bone gatherers, who arrived during the 1870s.” “Sam Gholson, William C. Dunn, and William E. Cureton were among the early settlers. As more people moved into the area, the county was organized in 1878, and Buffalo Gap, a small settlement near the center of the county, became the seat of government. By 1880 there were 917 people living in the area, and ranching completely dominated the local economy.”

“Settlement accelerated when the Texas and Pacific Railway built through the area in the early 1880s. Buffalo Gap was bypassed by the railroad, which was routed instead to pass through the northern part of the county to the site of a new town, to be called Abilene. In 1881 the railroad connected the area to national markets and encouraged immigration. While Abilene began to develop into a shipping center, Buffalo Gap declined in population, and, after an election held in 1883, Abilene became the county seat. Attempts by the people of Buffalo Gap to challenge the election results by force of arms were quickly suppressed.”

“Though the climate and land of Taylor County were hostile to agriculture, hopeful farmers experimented with different crops in the 1870s and 1880s, cultivating peaches, corn, wheat, and cotton. The spread of crop cultivation led to disputes between the cattlemen who favored the open range and the new farmers who sought to fence in their crops. This fence-cutting war was on the brink of an armed exchange until the late 1880s, when the legislature passed new laws to regulate the sale, ownership, and fencing of land.”

“The number of farms in the county almost doubled during the 1890s, rising to 1,152 by 1900. During the first years of the twentieth century, hundreds of farmers moved into the area. Though ranching remained important, crop farming emerged as the most significant element of the economy, and the cultivation of cotton continued to expand. By 1910 more than 101,000 acres were planted in cotton, while only 3,200 acres were devoted to wheat and corn combined.”

“The growth of the agricultural economy was reversed during the 1910s because of extended droughts at the beginning and the end of the decade. Cotton acreage declined 30 percent, to 17,000 acres, by 1920. Though some farmers switched to wheat production, the number of farms dropped to 1,892 by 1920.”

“The 1920s saw a resurgence of cotton cultivation, however, and the economy boomed. More than 139,000 acres were devoted to cotton by 1924 and more than 150,000 by 1929. The cattle and poultry industries also grew during these years, and sorghum became an important crop. By 1930 there were 2,333 farms in the county, and the population had increased to 41,023. Abilene more than doubled in size during the 1920s; by 1930, 23,175 people were living there. Taylor County’s growth during the 1920s was to some extent reversed during the Great Depression of the 1930s, which wiped out many cotton farmers.”

“The agricultural economy also shifted; after 1945 cattlemen diversified their stock and began raising more pigs and sheep; poultry farming was also encouraged. Meanwhile Dyess Air Force Base, completed near Abilene in 1956, also helped boost the local economy. Though farm consolidations and mechanization led to a steady decline in the number of farms during this period, the county’s population rose to 63,101 by 1950 and to 101,078 by 1960.”

“In the 1990s most of the county’s residents lived in Abilene, the county seat (population 121,495). Other communities include Merkel (2,637), Tye (1,254), Tuscola (750), Buffalo Gap (455), Impact (34), Lawn (321), and Trent (339). Abilene’s zoo and its numerous parks and lakes and provide residents and visitors with recreational opportunities. Other significant attractions include Buffalo Gap Historic Village and the annual West Texas Fair.”

I was the guest of Abilene and Taylor County on Thanksgiving Day, November 28, 2013, and I returned to photograph the original county courthouse in Buffalo Gap on July 5, 2015. Dating from its construction period between 1879 and 1880, the original Taylor County Courthouse is the oldest building still standing in the village of Buffalo Gap and is also one of the oldest recorded buildings remaining in the entire county. Martin, Byrne, and Johnston served as contractors, and are assumed to have drawn up its designs as well.

The courthouse was completed on May 20, 1880, nearly two years after the county was organized. The delay is attributed to Indian scares and lack of funds. Several records indicate this courthouse was also a frequent scene of breakouts and lynchings.

It’s a noteworthy testament to frontier justice that operates as a county museum today. The view of the Taylor County countryside, as seen from the western side of the building The interior of the courthouse today is set up as a museum devoted to Taylor County history. The historic courtroom is on the first floor, a rarity among most courthouses. While the architect is not officially documented anywhere, this design is often attributed to Jasper Newton Preston of Austin. It came into existence in 1883, three years after the Buffalo Gap courthouse was built and the same year Abilene was designated as the new county seat. No time was wasted in constructing a proper courthouse there, but it was demolished thirty-two years later in 1915. Rising from the rubble of the previous courthouse came this three-story, brick, Classical Revival design of George Burnett (of Waco). A.Z. Rogers served as contractor.

As the National Register describes it:

“The 1915 Taylor County Courthouse is a 3-story brick Classical Revival building with a rectangular plan and a concealed flat roof. The building utilizes a variety of materials on the exterior walls of the basement and three upper stories including brick, cast stone and terra cotta. The building is the lone building on the block, a feature that enhances both its scale and gradeur.The front, facing west onto Oak Street, features giant order Ionic columns that form a continuous colonnade around the building; a bas relief spandrel connects the columns and forms the break between the second and third floors. A central primary entrance has a tripartite architrave of bracketed hoods crowned by cast stone pediments. Only the center architrave serves as an entrance doorway, however. A string course acts as the architrave of the building’s entablature. A modillion cornice that encircles the top of the building caps the sparsely detailed frieze. Although the original wood sash windows have been replaced with aluminum frame windows that detract from the building’s historic character, the courthouse retains its original fenestration and enough of its integrity to be recognizable to its period of significance. Erected in 1913-1915, the Taylor County Courthouse is nominated at the local level of significance.”

This courthouse still stands in downtown Abilene, just across the street from the current one. Some county offices are kept here, making this one of the oldest courthouse annexes in the state. Tittle, Luther, Loving, and Lee (of Abilene) was the architectural firm responsible for the towering, modern design in use today. Contractors on hand were from Rose & Sons, Inc., who constructed the courthouse from concrete and pink granite.

The eastern façade, on Oak Street The northern (and main) façade looks out upon 2nd Street and Downtown Abilene. 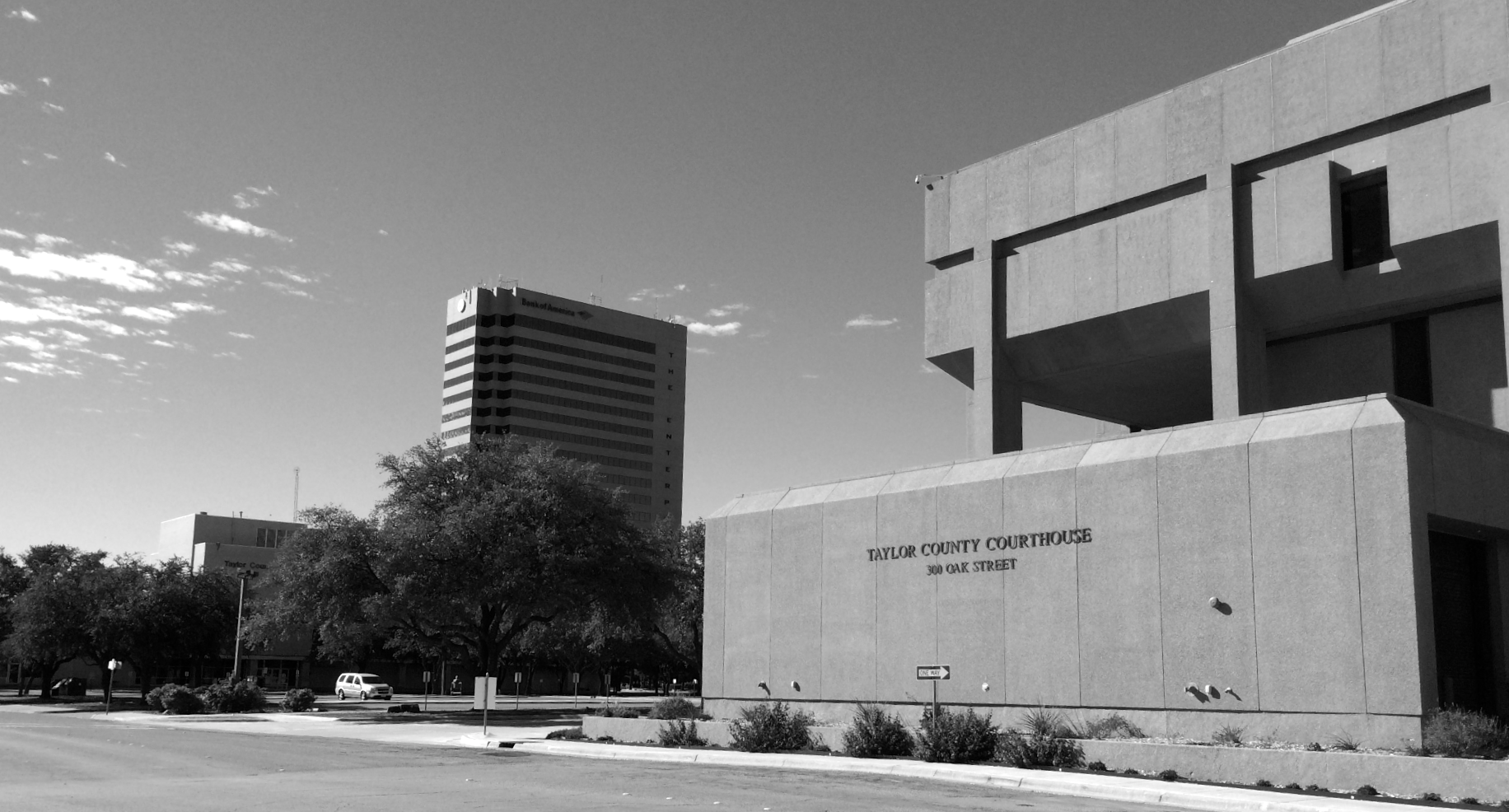