“Callahan County embraces 899 square miles of grassy prairie. The elevation ranges from 1,500 to 1,900 feet. The county is divided by a low range of hills known as the Callahan Divide, which runs from east to west. The region to the north is in the Brazos River basin, and the area to the south is in the Colorado River basin. Between 21 and 30 percent of the land in the county is considered prime farmland.”

“Tornadoes are common in the area. Since its establishment in the last century Callahan County towns have suffered several severe storms, most notably Baird in 1895, Oplin in 1922, and Clyde in 1938 and 1950.”

“Until the 1870s the county was dominated by Comanche Indians. The area was first explored and described by Dr. Henry C. Connelly of the Chihuahua expedition in 1839–40. Callahan County was formed by the Texas legislature in 1858 from Bexar, Bosque, and Travis counties and named for James Hughes Callahan, a survivor of the Goliad Massacre and leader of the Callahan expedition.” 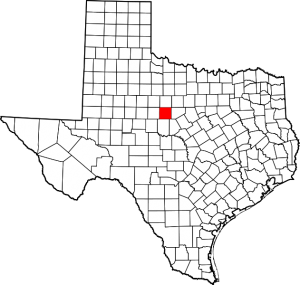 “Between 1858 and 1877, Callahan County was attached successively to Bexar County, Travis County, and Eastland County for administrative and judicial purposes. In 1877 the residents, more than 150 strong, signed a petition requesting the organization of Callahan County. At the election of July 3, 1877, Callahan City became the first county seat, a position the town retained only until the election of October 13, 1877, when Belle Plain was voted in as the new county seat.”

“Belle Plain showed signs of rapid growth, and a number of settlers moved there in anticipation of the railroad; by 1878 it had a population of more than 100, and by 1880 the number of residents had grown to nearly 300. In 1880–81 the Texas and Pacific Railway was constructed from Fort Worth to El Paso. Stations for the railroad were located at Putnam, Baird, and Clyde, all of which soon developed into towns, but bypassed Belle Plain six miles to the north. An election on January 16, 1883, made Baird the new county seat.”

“Belle Plain soon declined; the stone jail and many of residences were moved to Baird, and by 1897 only four families remained. The construction of the railroad also opened the way for numerous new settlers. During the 1870s and 1880s several communities formed, including Cottonwood, Atwell, Cross Plains, Caddo Peak, Eagle Cove, and Eula. More settlers continued to arrive during the 1890s, and by the turn of the century there were post offices in Oplin, Tecumseh, Denton, Dressy, Admiral, and Dudley. In 1880 the county population was 3,419; by 1890 it had grown to 5,274.”

“During the 1880s extensive farming was introduced. Settlers from East Texas began farming in the area around Cottonwood in the mid-1880s, raising cotton, oats, and various varieties of fruit. A severe drought in 1886–87 ruined crops and caused some to wonder if the region was suited to agriculture, but by the late 1880s the farming economy had recovered and was rapidly expanding. Between 1880 and 1890 the number of farms in the county grew from 346 to 518, and by 1900 it had increased to 1,176. During the late nineteenth century corn was the largest crop; by 1900 Callahan County farmers were producing more than 300,000 bushels a year.”

“Despite the impressive growth of agriculture, however, ranching continued to form the mainstay of the economy. The total number of cattle in the county during the period from 1890 and 1930 ranged between 25,000 and 35,000. Most were beef cattle, although dairying became more popular after the turn of the century, and for a time the county was a major producer of butter.”

“By 1905 county farms numbered more than 1,600, three times as many as in 1890. Land prices, however, also increased, and many newcomers could not buy land. As a result, the number of tenant farmers grew steadily, until by 1920 nearly half the farmers-823 of 1,649-were tenants. Most were sharecroppers, who farmed the land in exchange for a share of the harvest. In contrast to tenants in many parts of the state, however, virtually all of the Callahan County tenants were white; in 1910 there was only a single black tenant in the county.”

“By 1940, 1,200 active farmers were left, down more than 600 from the peak in 1910. The downturn in agriculture was partially offset by the discovery of oil in the county in 1923. A number of promising fields were soon located, including the Cross Plains Townsite, Pioneer, Cross Cut, and Blake fields, and by the late 1920s the oil business was in full bloom. Oil and gas revenues helped some landowners to survive the economic slump of the 1930s and made a few large landowners wealthy.”

“In 1982, 91 percent of the land in the county was in farms and ranches, with 18 percent of the farmland under cultivation and 4 percent irrigated. That year Callahan County ranked 180th of the 254 Texas counties in agricultural receipts, with 73 percent coming from livestock and livestock products, primarily from cattle. Overgrazing and water problems-erosion, salinity, and a shortage of potable water-had brought about several conservation programs. Principal crops included wheat, oats, hay, sorghums, and peanuts. Other significant agricultural products included watermelons, peaches, and pecans.”

I was the guest of Baird and Callahan County on Thanksgiving Day, November 28, 2013. 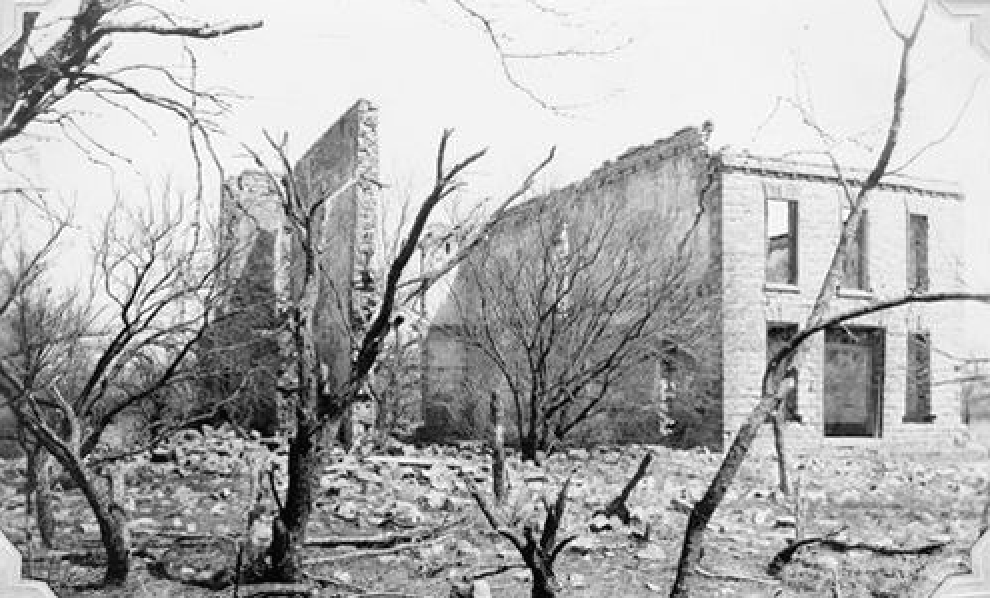 The first courthouse in Callahan County history was constructed shortly after the local government’s official organization. In 1883, a county seat election seized the title from Belle Plain and awarded it to Baird, instead. As such, the Belle Plain courthouse was abandoned and left to rot away into the plains. In 1939, a photographer working for the Texas Department of Transportation happened to capture this image of the courthouse, half a century later. Look at its condition by that point and just imagine what it might look like now.

Callahan County has had a wealth of courthouses. Some of Texas’ most renowned architects have, over the course of history, practiced for the county.

The story of its courthouse heritage begins in 1885, when plans for Baird’s first courthouse were put into motion by F.E. Ruffini of Austin. The previous year, Ruffini became privy to designs of W.W. Larmour from his brother, and fellow architect, Oscar Ruffini who had supervised a Larmour project in Tom Green County. So the story goes that F.E. liked those plans so much, he adapted them to form a style that history would eventually come to record as his signature one.

The Ruffini courthouse in Baird was completed in 1885, shortly after the finishing touches had been put on his other design in Blanco County. The photo above is of his Blanco County Courthouse, as no known pictures still exist of the Callahan County variant. However, the two buildings were said to have been virtually identical. 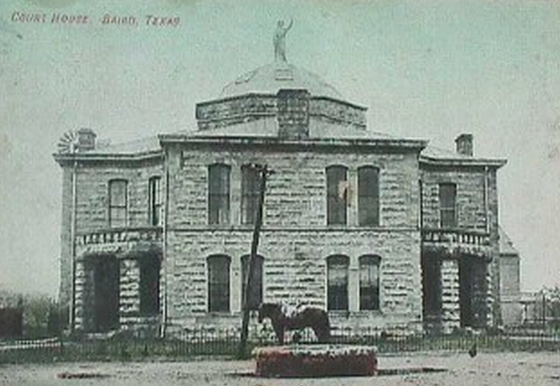 Excerpts from the records of the Callahan County Commissioners Court indicate that it was:

“Ordered by the Court that the J. Riely Gordon Co. Architects of Dallas be and are hereby employed as architects to prepare suitable drawings and specifications for a new courthouse for Callahan County approximately 65 x 75 feet two stories high and to utilize as much of the materials, etc. now contained in the old courthouse as is suitable. The remainder to be property of the contractor, who shall remove such stone and debris as is not needed for filling and grading the lot. It is further ordered by the court that the plans and specifications are to be submitted to this court, and accepted by this court before any advertisement for bids are to be made on same. It is further ordered and understood between Callahan County acting through her Commissioners Court, and the J. Riely Gordon Co. Architects, that said Callahan County does not become to said J. Riely Gordon Co. Architects, for any fees or compensastion of any character until a contract is let and bond fixed to build said courthouse.”

This information comes to us via page 425 in Volume C of the Callahan County Commissioners Court Minutes records. Fascinating stuff.

John Riely Gordon was selected to provide the newest courthouse after F.E. Ruffini’s 1885 design was demolished. In fact, stone taken from that rubble was recycled to build its successor. I suppose there was no point in wasting it. Gordon’s work and the contractor’s labor culminated to a final price of $27,069. James Flanders, also of Dallas (who had a lot more work in West Texas than Gordon ever did) served as supervising architect.

Gordon’s trademark corner entries make this a rustic, but yet unmistakable, addition to his Texas resume. Unfortunately, modernization drove this one into the ground as well. That was in 1929. 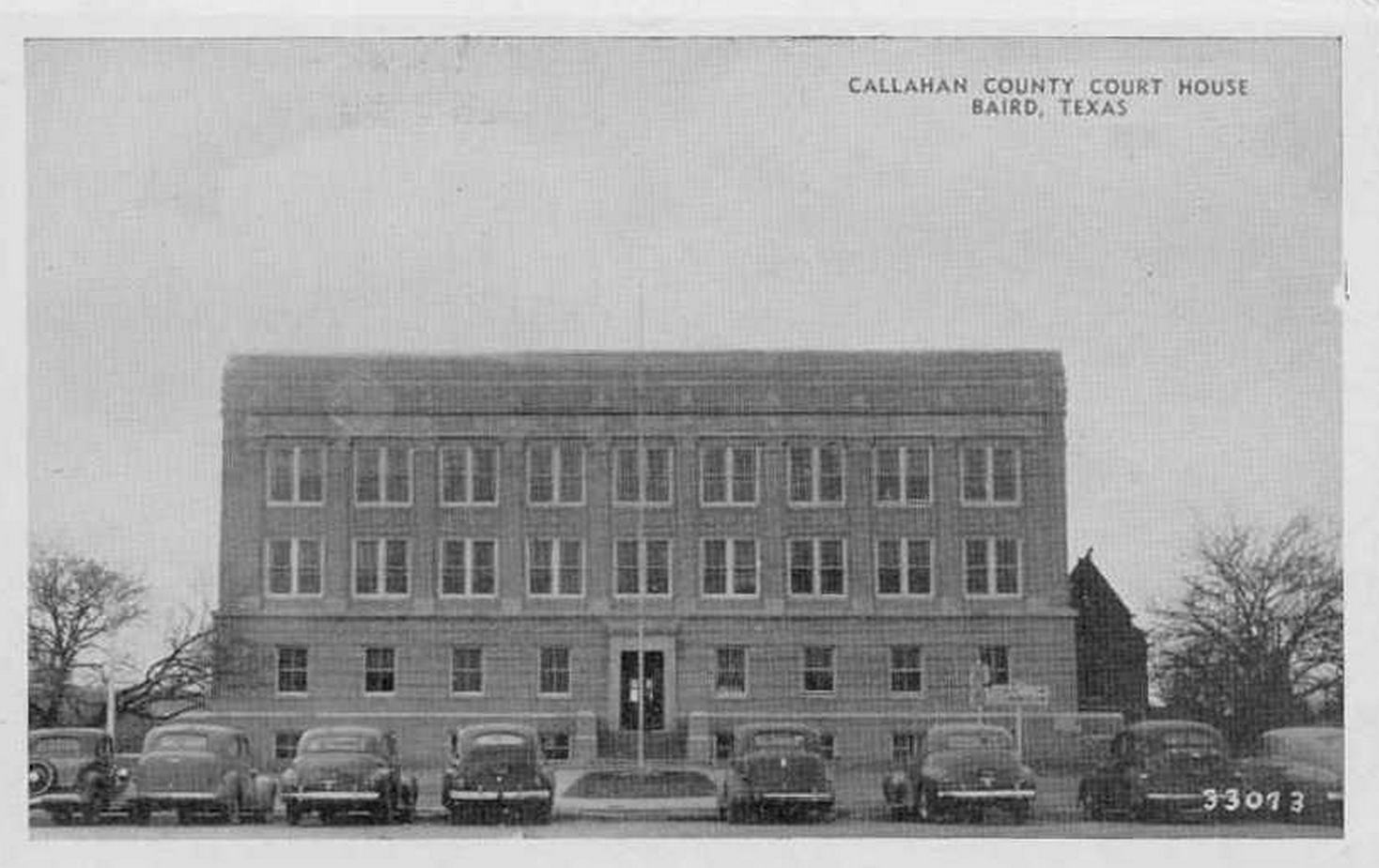 A year prior to the 1900 courthouse’s demolition, Callahan County officials had begun the process of looking for suitable architects of a newer, more modern courthouse to fulfill spacial requirements and newer aesthetic trends. Voelcker & Dixon, of Wichita Falls, were selected, and Suggs & Dunlap served as the contractors alongside them.

1961 saw both structural repairs to the courthouse basement and a reconstruction of the roof with steel and concrete. An elevator was added the next year. The entire second floor was remodeled in 1970. 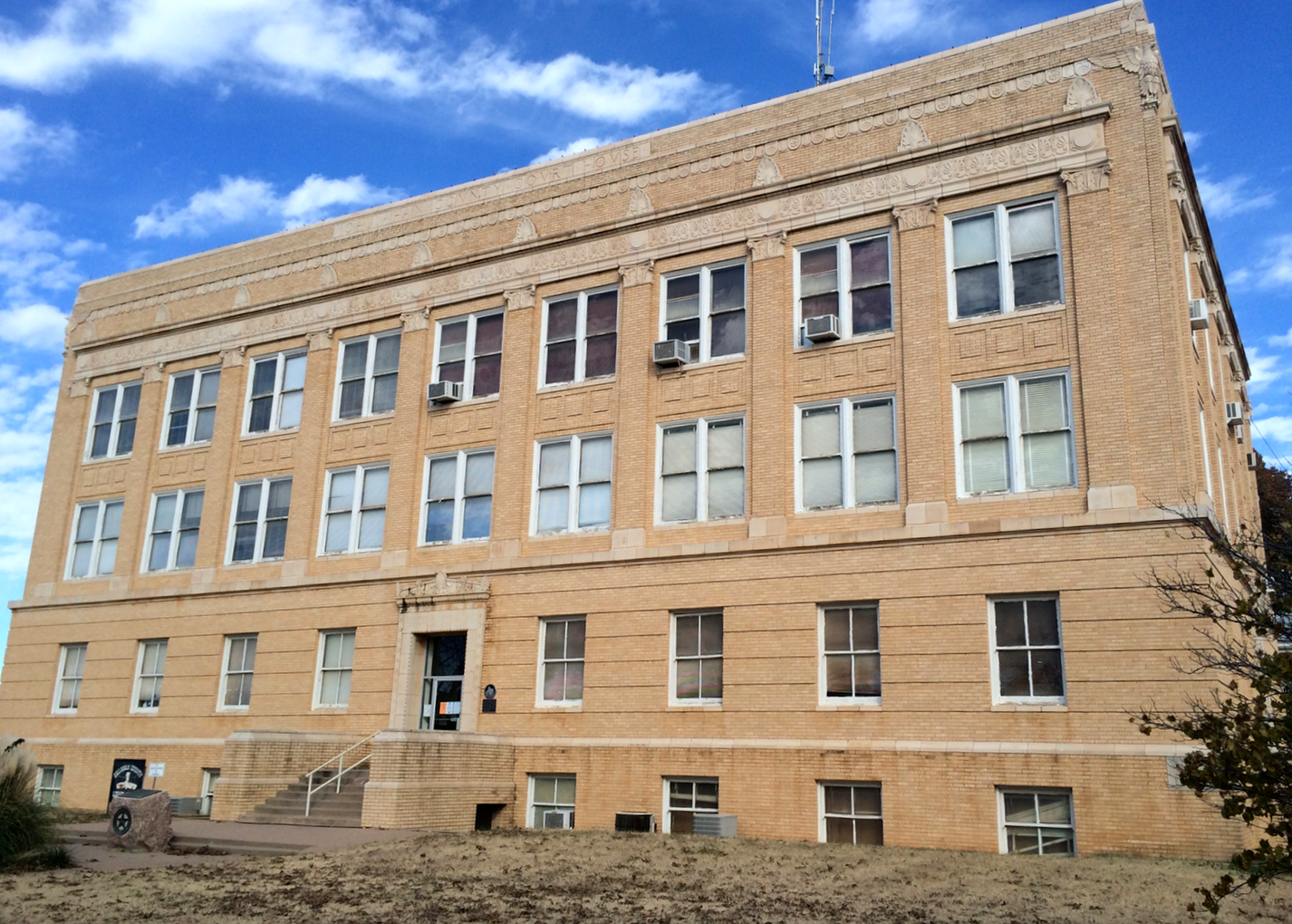 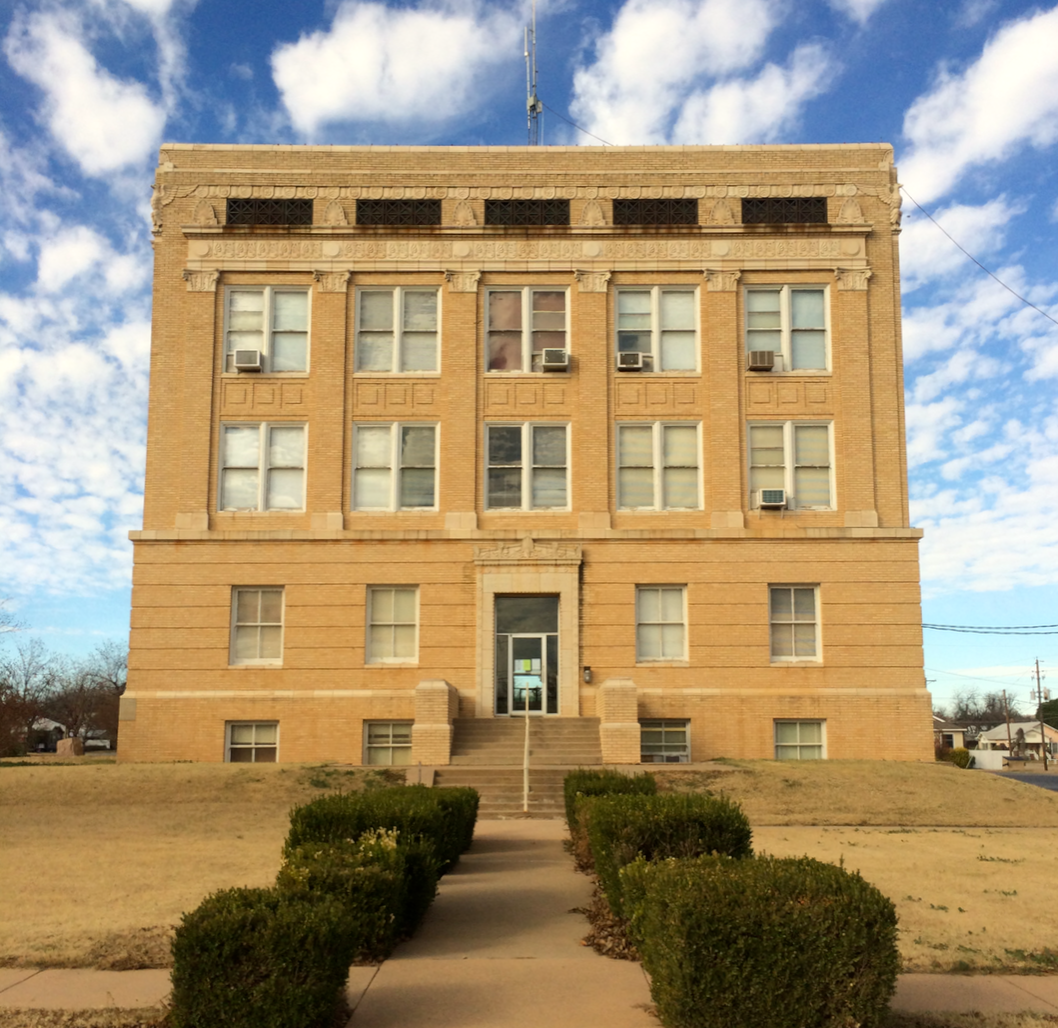 Above the eastern doors, we’re reminded: “The voice of the people is the Voice of God, the law of the place is justice for all.” 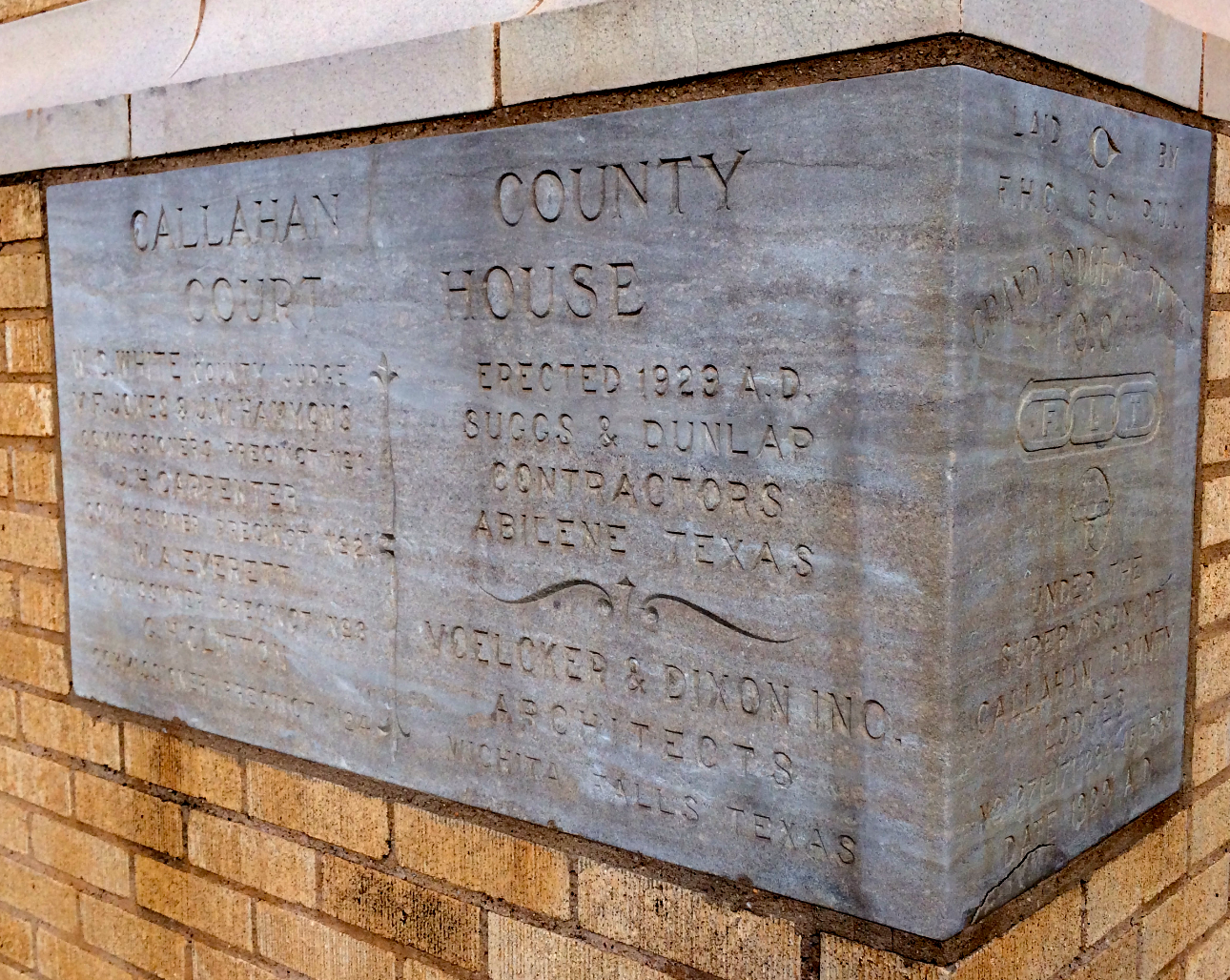 Slightly hidden behind two shrubs, the cornerstone can be found on the southeast corner. 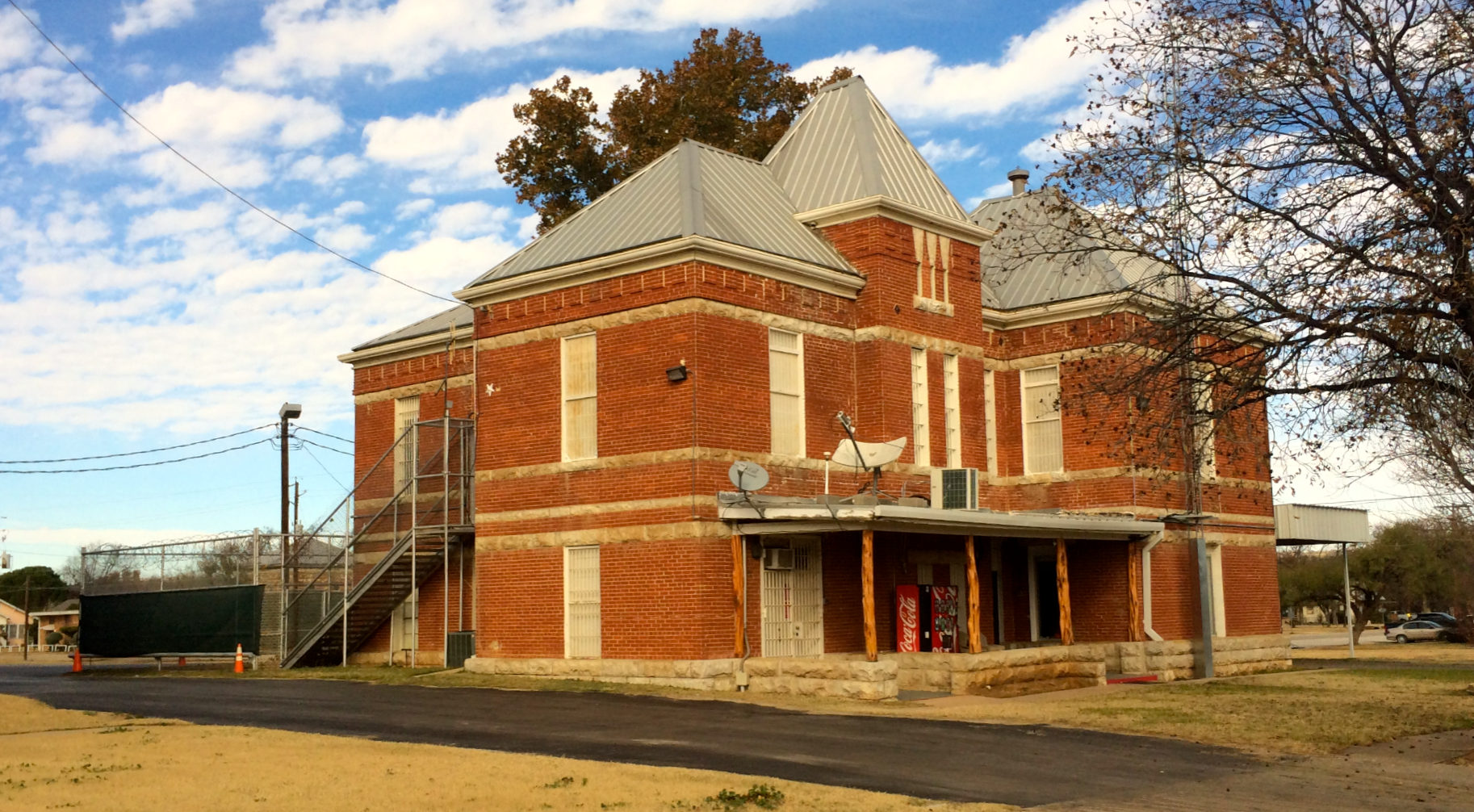 The Callahan County Jail is near the northeast corner of the courthouse.

Callahan County’s oldest jail (constructed in 1878 and moved from Belle Plain to Baird in 188) lies diagonally across from the courthouse’s northwest corner. 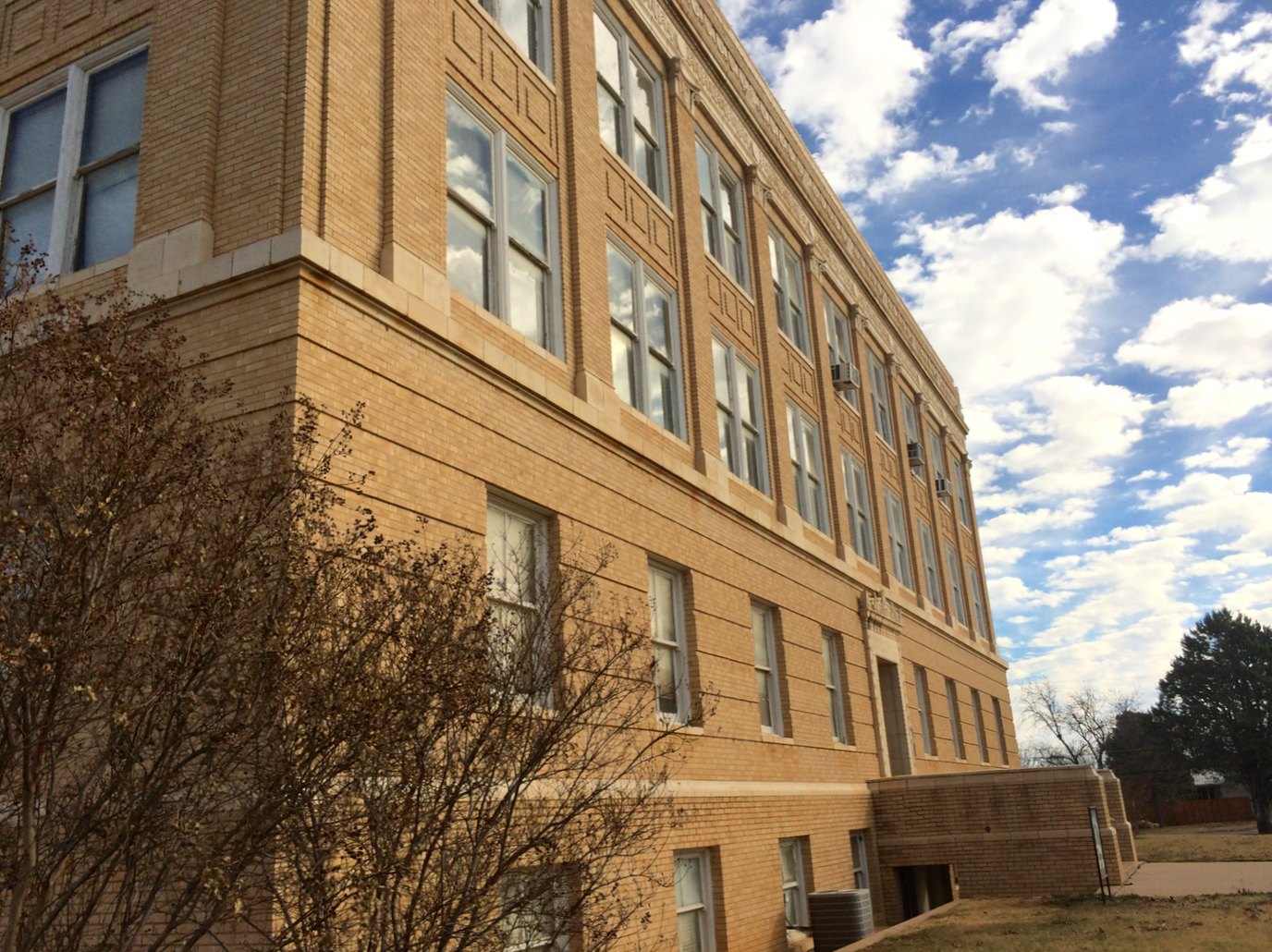 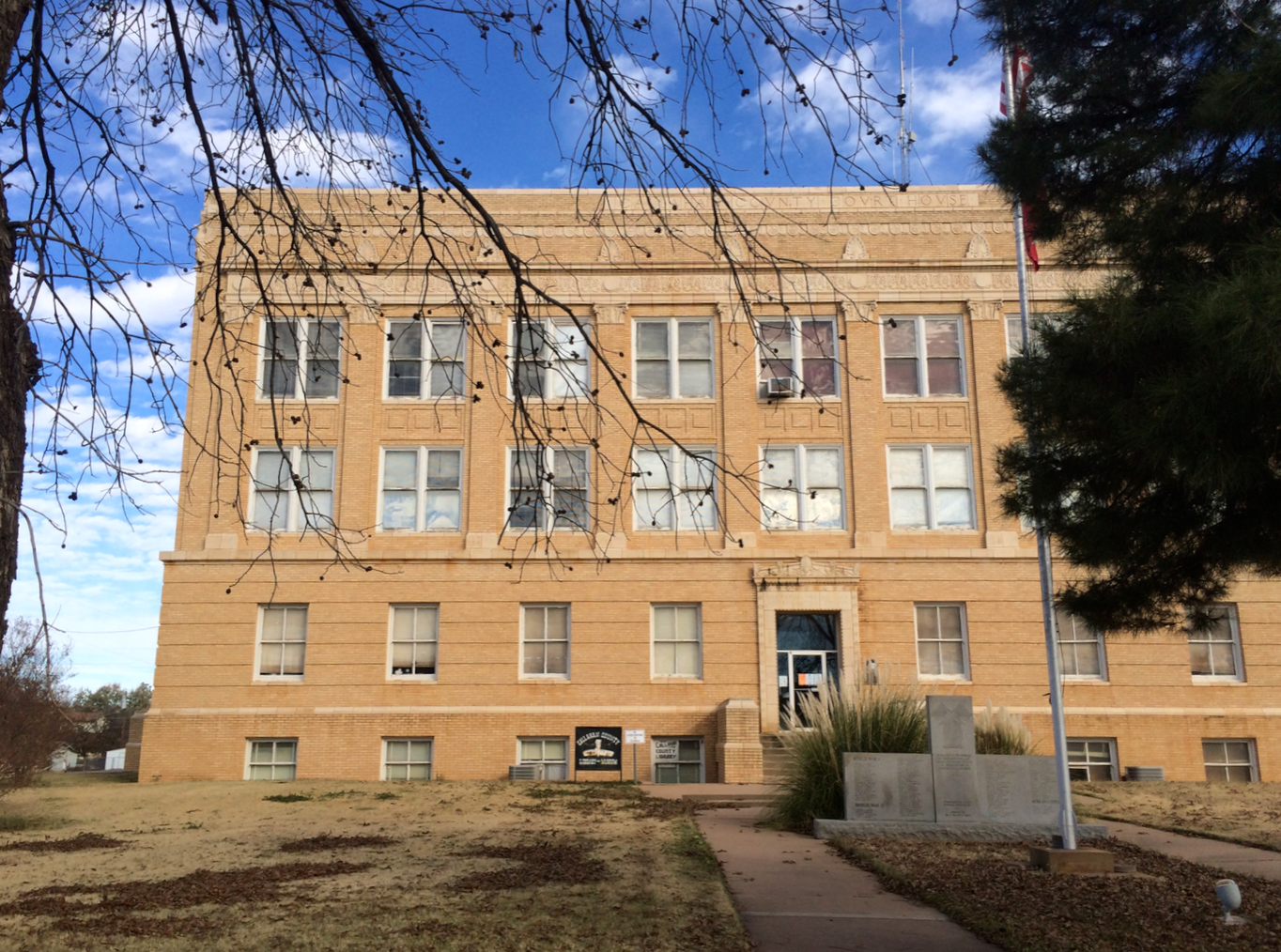 The view down Market Street from the southern entrance 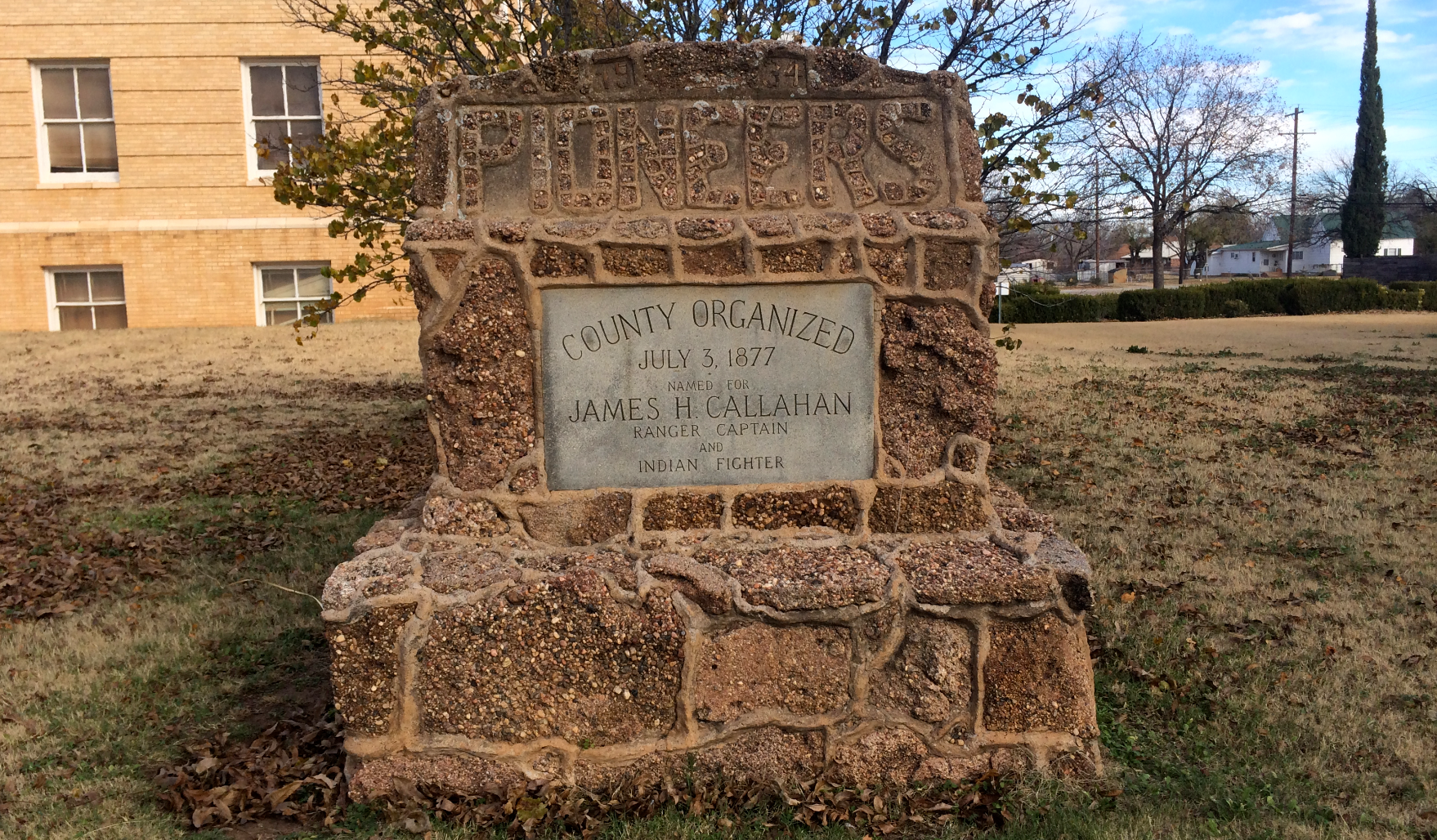 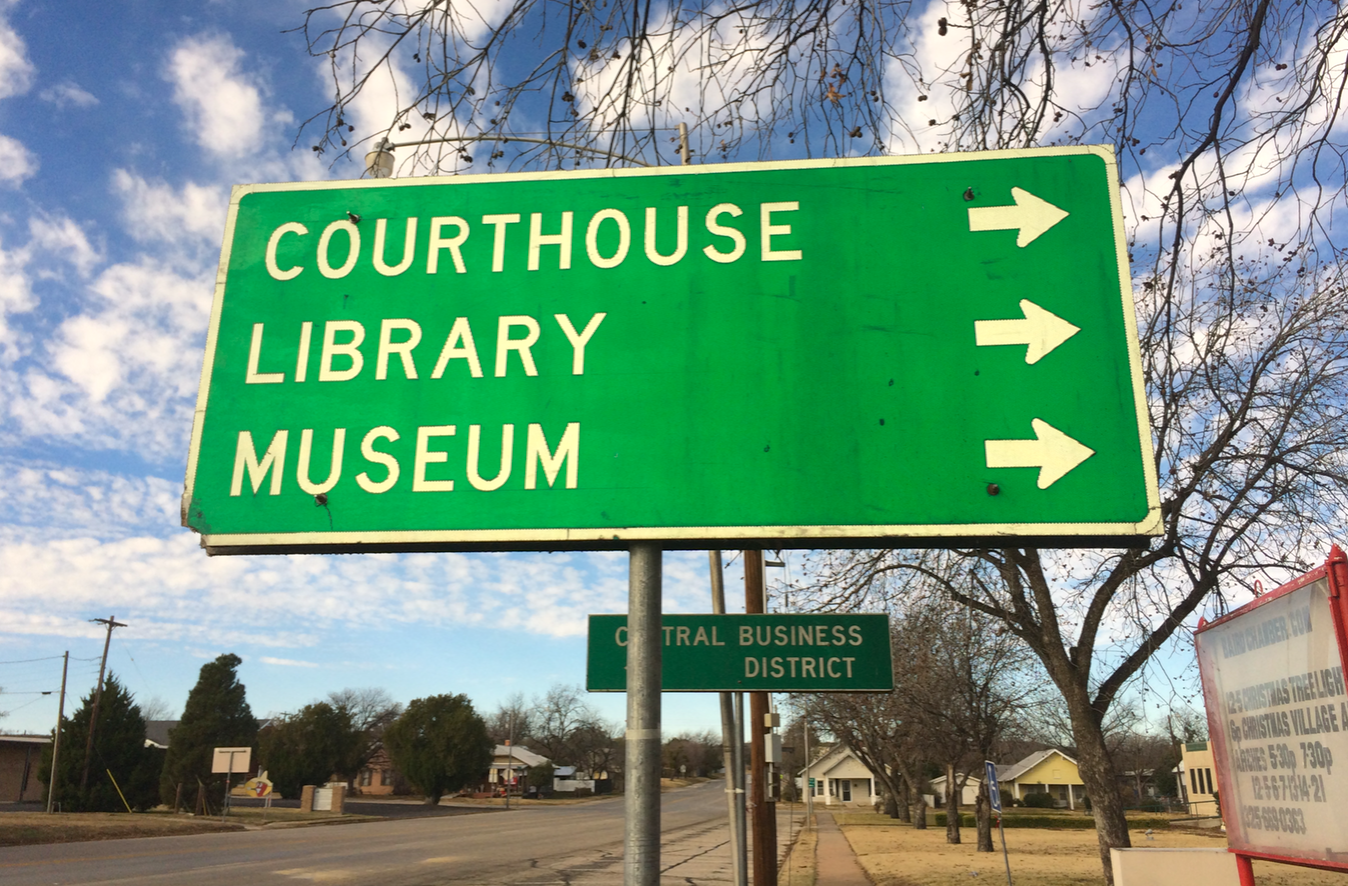 A sign near the courthouse grounds tells it all.