“Leon County embraces 1,078 square miles of rolling plains. Elevations range from 150 to 500 feet. The eastern two-thirds of the county is drained by the Trinity River, which forms the eastern boundary, and the remainder is drained by the Navasota River, the western county line.”

“Though the main route of the online pokies deposit bonus deutsch download passed along what is now the southern boundary of the county, the Spanish failed to establish permanent settlements there; Bucareli, on the Trinity River in neighboring Madison County, founded in 1774, was the nearest the Spanish came to settling Leon County.”

“The Mexican government made the first land grant in what is now Leon County to Ramón de la Garza in 1831. Additional grants were given before Texas independence, but few people settled permanently. After the attack on Fort Parker in neighboring Limestone County in 1833, white settlers abandoned the region, not to return until after the Texas Revolution. In 1837 they constructed a blockhouse on Boggy Creek and named it Fort Boggy. It offered protection to settlers who located nearby, and soon a small community developed adjacent to the fort.” 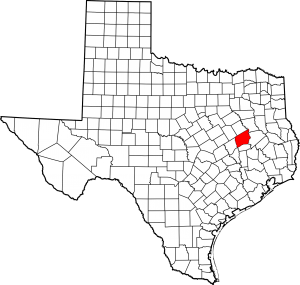 “Leon County was officially formed from Robertson County by the First Texas Legislature in 1846. The first meeting of the county court was held on October 16, 1846, with R. E. B. Baylor as presiding judge. The naming of the county is the subject of much controversy. Some maintain that it was named for Martín De León, founder of Victoria. However, many residents insist that the name (“lion” in Spanish) came from the nickname of a yellow wolf of the region commonly called the león. The first county seat, Leona, on the southern boundary near the Old San Antonio Road, was picked in 1846.”

“During its early years most of the county’s population was distributed along such Trinity steamer landings as Cairo, Commerce, and Brookfield’s Bluff, all of which later disappeared. During the end of the 1840s and early 1850s the population began to move away from the river valley, toward the higher land in the county’s center [hence, Centerville].”

“Like most other counties of the region, Leon County generally had small farms rather than large plantations. Of more than 700 families in 1860, 320 owned at least one slave. However, most slaveowners owned fewer than ten bondsmen, and only twenty-seven reported owning more than twenty. About half of the farmers cultivated fewer than fifty acres; these corresponded roughly to the percentage of nonslaveowners in the county.”

“Although Leon County residents made only a small material contribution to the [Civil] war effort, they were forced to deal with the lack of markets and dizzying fluctuations in the value of Confederate currency, as well as concern for their relatives and friends on the battlefield. The end of the war brought dislocations in the county’s economy. For many whites, the abolition of slavery meant devastating economic loss. Before the war slaves had constituted nearly half of all taxable property in the county, and their loss, coupled with a sharp decline in property values, devastated most planters. Farm values, which had risen rapidly before the war, fell dramatically in its aftermath and did not regain prewar values until 1880.”

“The economy began to recover during the 1870s, but not until the early 1880s did production levels for most crops met or exceeded prewar levels. In the years just after the war, corn was the county’s leading cash crop, but as the century wore on, cotton gradually replaced it as the largest source of agricultural receipts. Between 1870 and 1880 the number of farms in the county rose from 702 to 1,718. This increase was due in part to the growth of sharecropping. But it was also a reflection of the rapidly growing population.”

“After the turn of the century the amount of acreage given over to cotton gradually increased, and in 1930 more than half of the cropland harvested in the county (82,570 of 126,696 acres) was devoted to cotton.”

“The overreliance on cotton, however, had disastrous results during the Great Depression of the 1930s. Despite the growth of the farm economy between 1880 and 1930, hard times persisted for many farmers. Low agricultural prices and heavy debt took the land from many farmers. In 1880, 70 percent of the farms in the county were owner-operated. Twenty years later that figure had fallen to only 43 percent.”

“After [World War II], the economy changed dramatically. Cotton production declined during the 1940s; in 1950 the crop was only 3,616 bales. In place of cotton, most farmers turned toward raising hogs and cattle. Lumbering also saw a gradual increase as many fields, left to lie fallow, were gradually reforested. By 1972 Leon County, 42 percent forested, reported a farm income of $12 million, nine-tenths of which was derived from livestock. Though more than 3,000 bales of cotton was still grown annually, watermelons were the main crop.”

“In the early 1990s Leon County was among the state’s leaders in cow and calf production. Hogs were also raised in sizable numbers. The leading crops included hay, watermelons, vegetables, small grains, and Christmas trees.”

My trip to Centerville was complete with a tour of the courthouse given by county judge, Byron Ryder. He let us enter the courtroom and gave a brief history of some of the important aspects of the building. My thanks to him.

I was the guest of Centerville and Leon County on November 22, 2013. 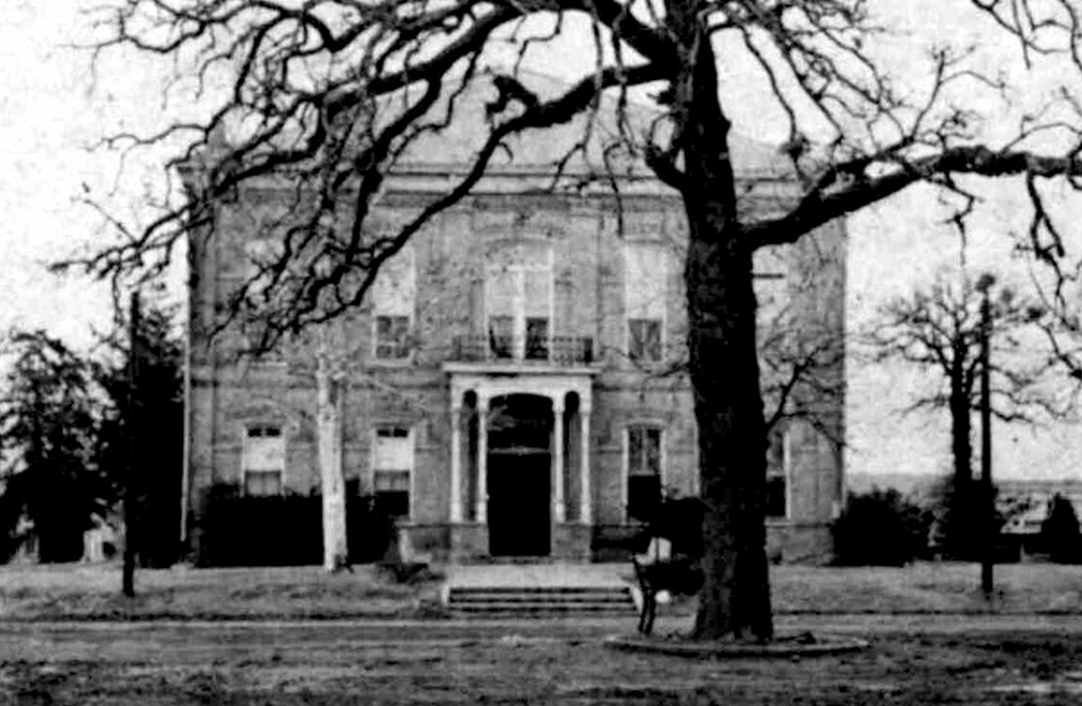 William Johnson was the architect chosen to design Leon County’s third courthouse, a small and quickly constructed replacement for the previous version that had burned within the same year. History indicates that a misunderstanding in communication between county commissioners led to the cost of the courthouse being nearly twice the quoted one provided by Johnson and contractor, P.G. Gillen.

As it happens, miscommunications of information seem to have been a significant trend in then history of this courthouse. The cornerstone maintains the architect was William Johnson, but sources like the Texas Historical Commission claim George Edwin Dickey of Houston was responsible, and still others implicate an A.L. Noyes. Whatever the truth is, this Classical Revival courthouse has stood the test of time. Whoever provided the designs did so well.

A THC restoration salvaged the building in 2007, and it has been shining ever since.

From the National Register:

“William Johnson designed the Leon County Courthouse in 1886. The building is small in size and displays attractive, although restrained, design features. The plan is rectangular with a single corridor extending lengthwise through the ground story. There are three offices on either side. A single stair in the corridor provides access to a landing on the north side of the second story. On either side of this landing is a small jury room, while the courtroom occupies most of the second story space. The foundation is of brick laid upon firm clay bearing three feet below the surface. The walls are constructed of brick with English Portland cement in the mortar rather than lime. The floors are structured with wooden joists, and there are cast iron ventilators in the walls to protect the ground floor joists against rot. Window and door openings are spanned with stilted brick arches. A transom was installed above the second-story windows to accommodate the high ceiling space of the courtroom. On both stories, window sashes with two-over-two lights are hung with cords and weights. The window sills are iron. The north and south facades are divided into five bays by brick pilasters with corbelling intended to represent Classical Doric capitals supporting an architrave. The east and west facades are similar but with only four bays. The east facade differs from the other facades in that the two central openings of the ground story are filled with brick panels. A small portico supported by paired iron columns with pedestals and modified Corinthian capitals emphasizes the south entrance. These bear upon low brick walls and support a wooden balcony with a decorative iron railing. Additional embellishments include brick stringcourses, a sheet metal cornice and chimneys with ornamental caps. The interior still retains most of its nineteenth-century character. The ceilings on the first and second floor are beaded lumber, rather than plaster and pressed metal.” 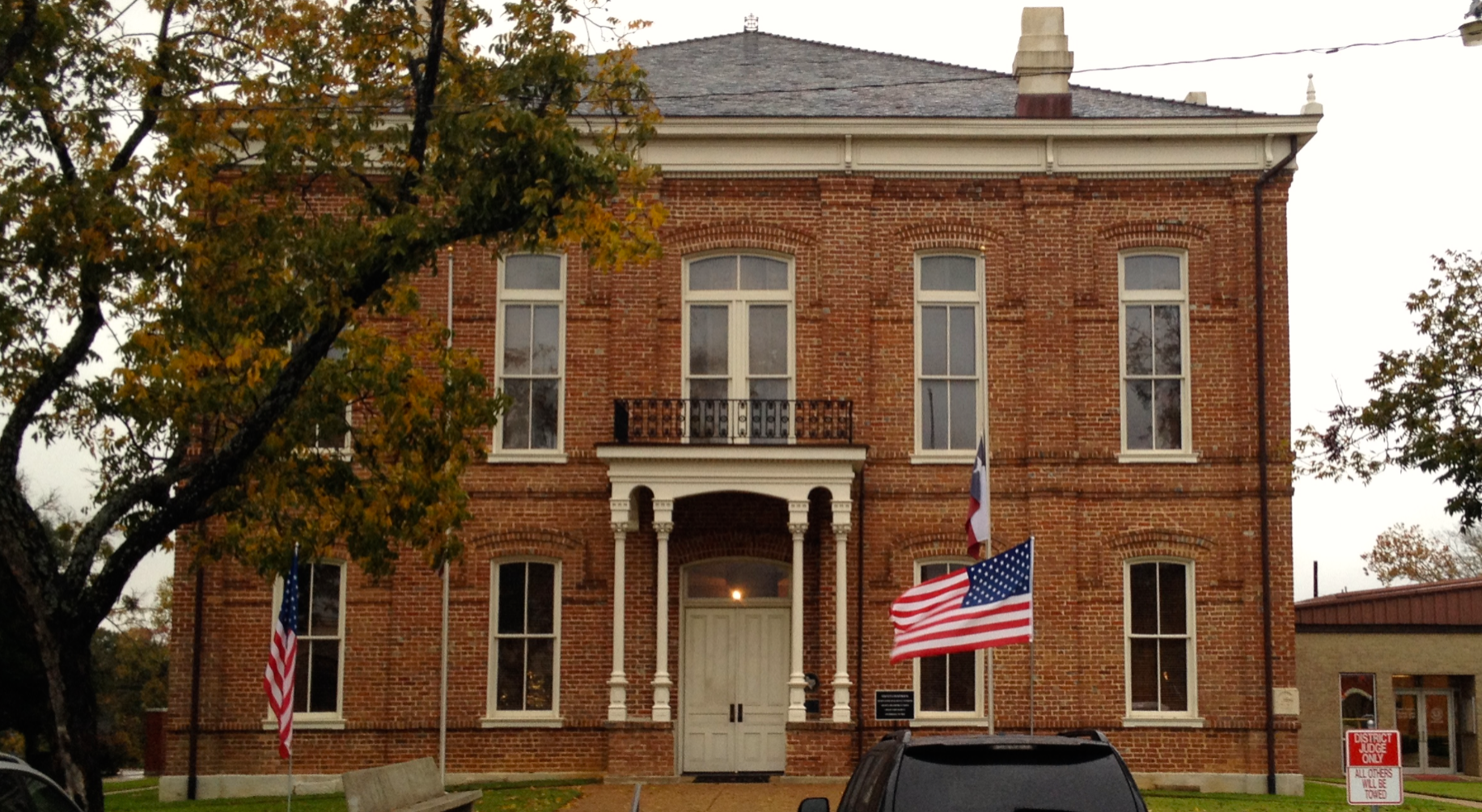 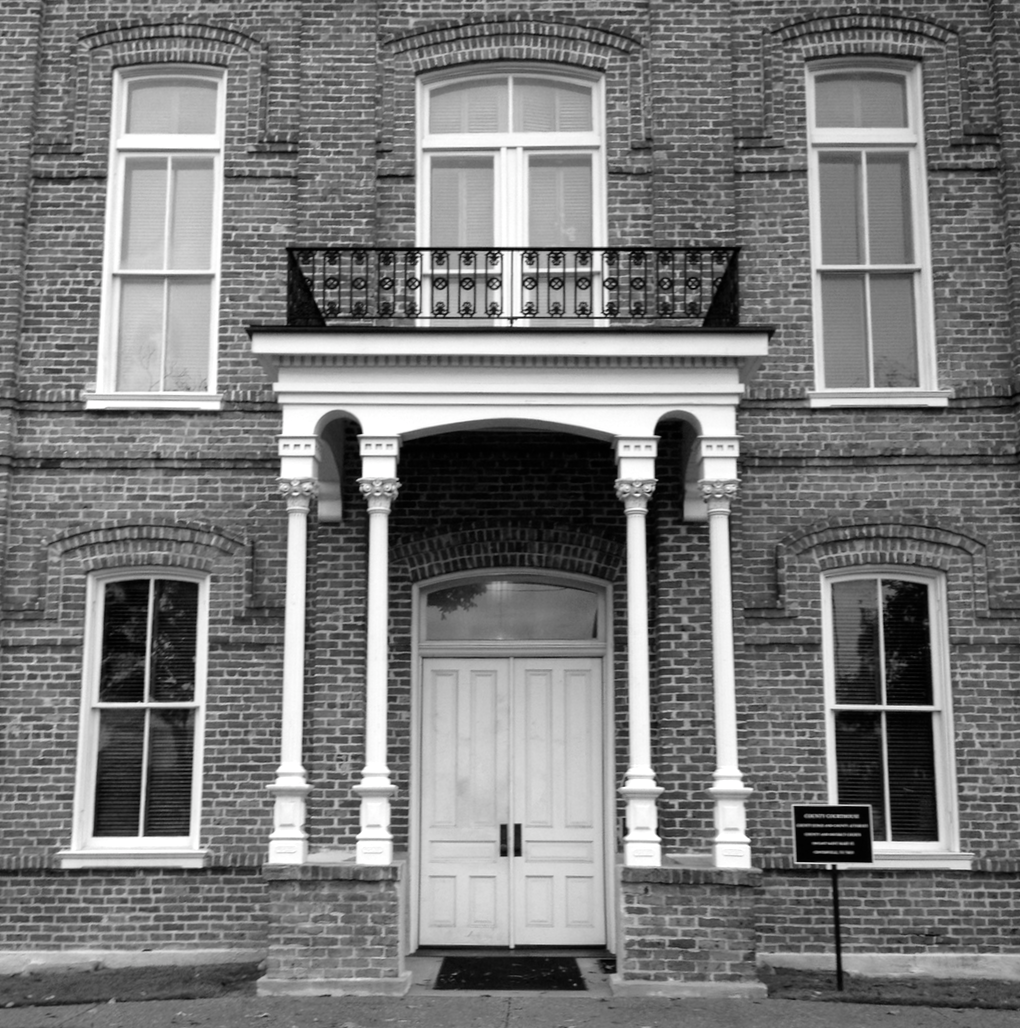 Prior to the THC’s 2007 restoration of this building, the entry portico read: LEON COUNTY COURTHOUSE. That aging wood has thankfully been replaced.

Inside the courthouse, a single, straight staircase leads to directly up to the second floor.

Thanks to Judge Byron Ryder, I was able to climb those stairs and see the courtroom.

On either side of the judge’s chair is a jury box. Judge Ryder said that depending on what time of the day it was, the jury would sit opposite the sun in order to keep the light out of their eyes. Never underestimate the cleverness of Texas settlers. 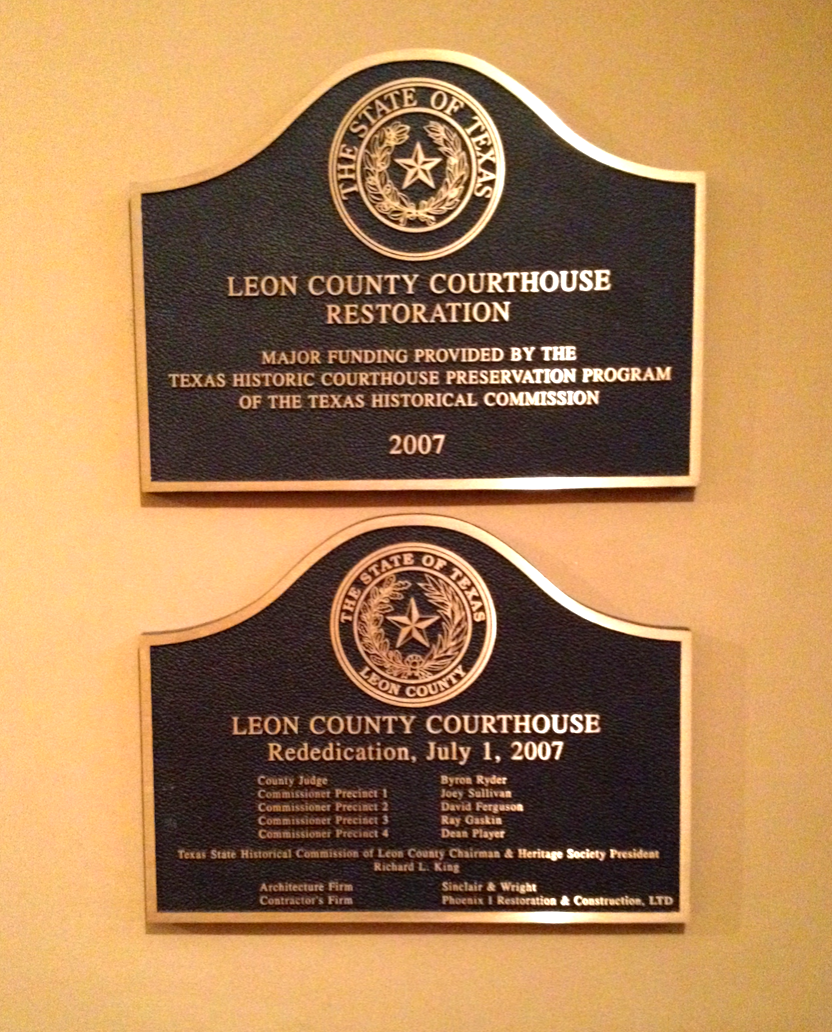 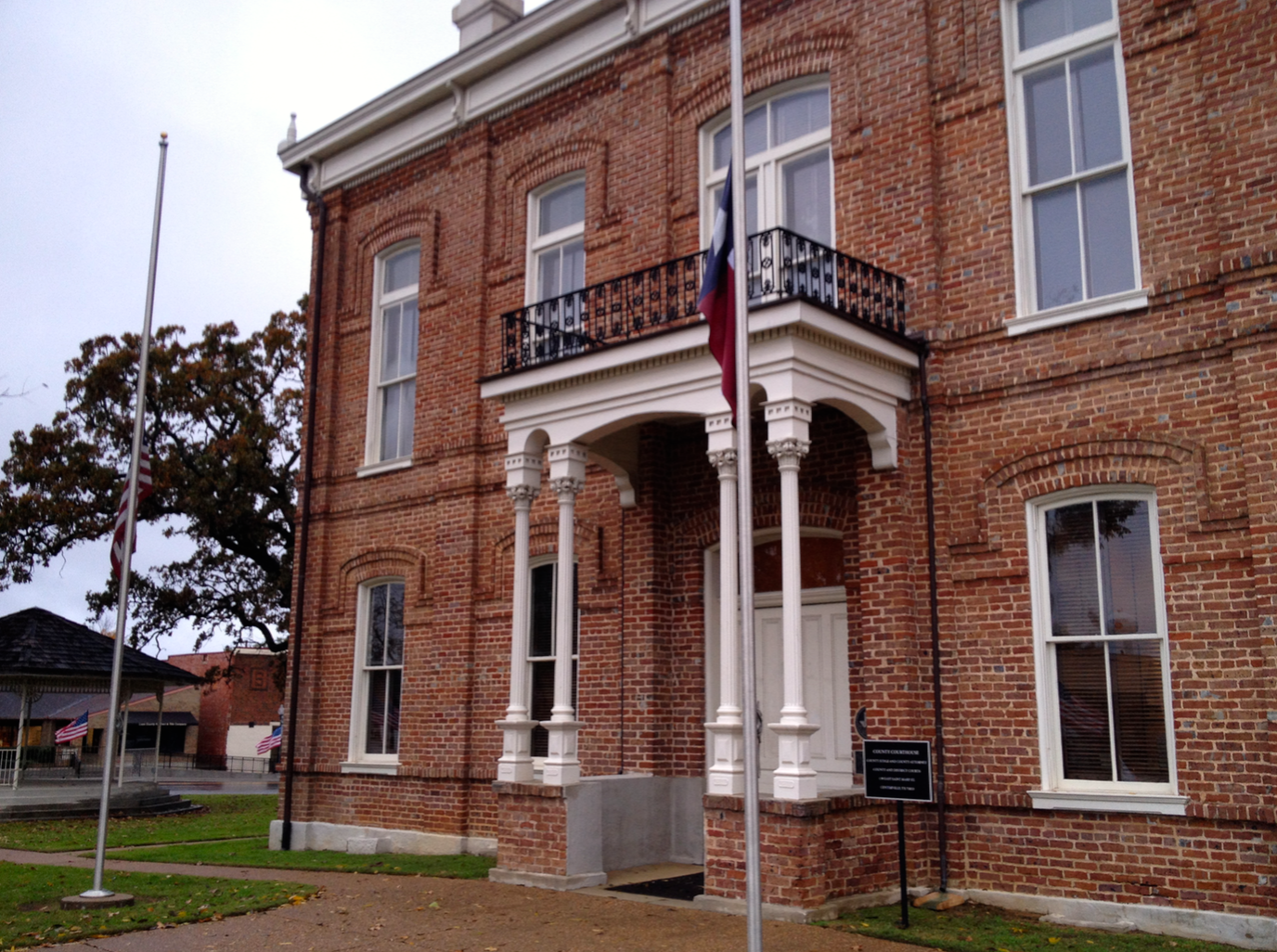 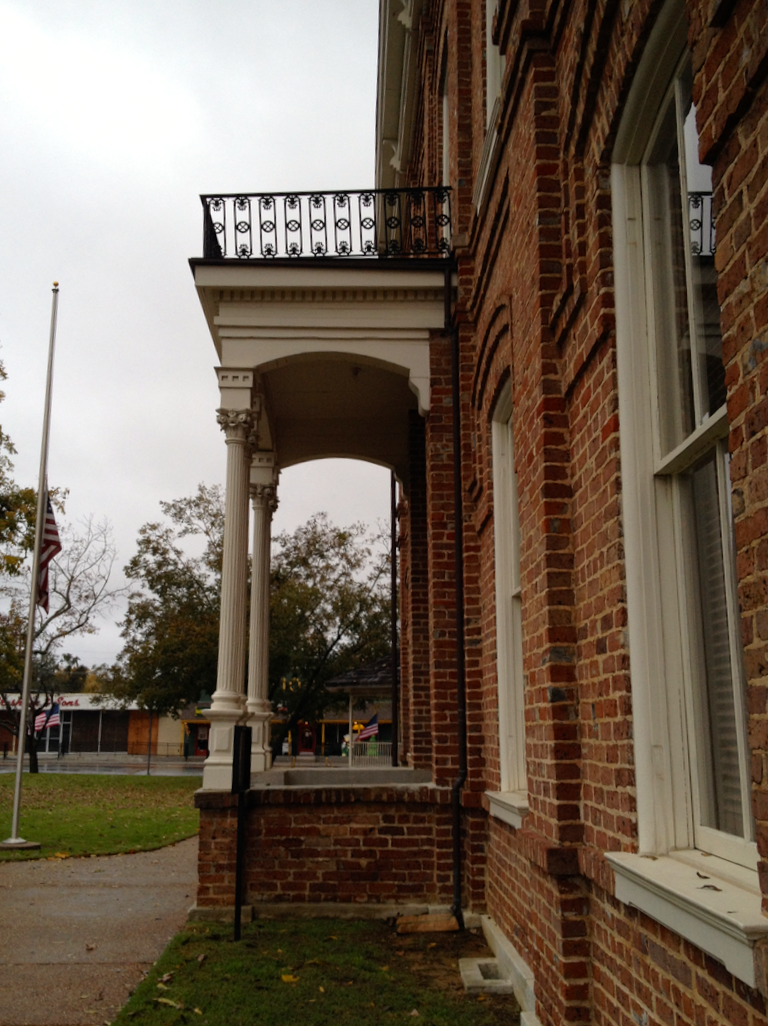 The modified, “mini” Corinthian columns flanking the main entrance are an interesting feature. 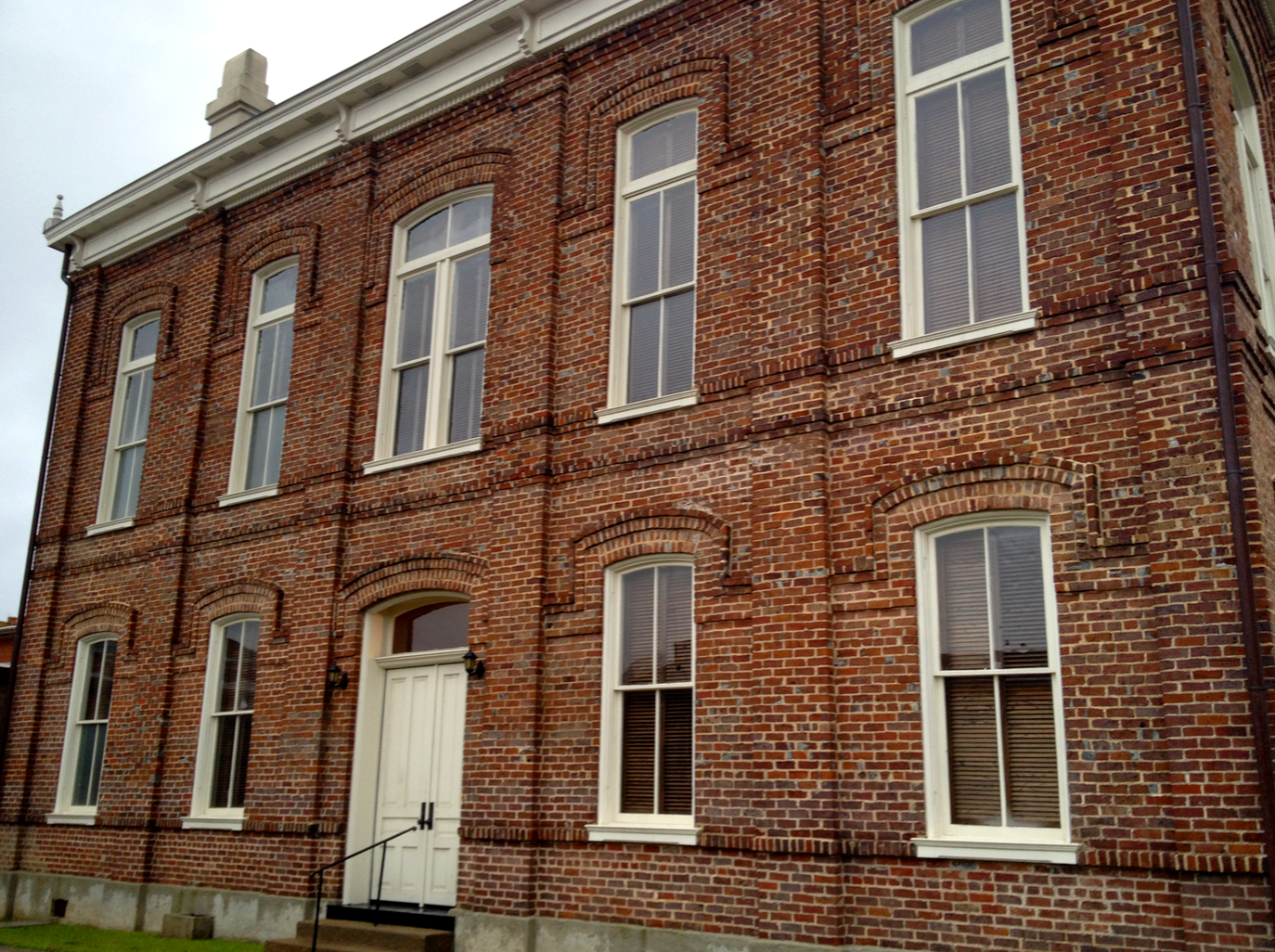 A gazebo sits off to the west side of the courthouse. 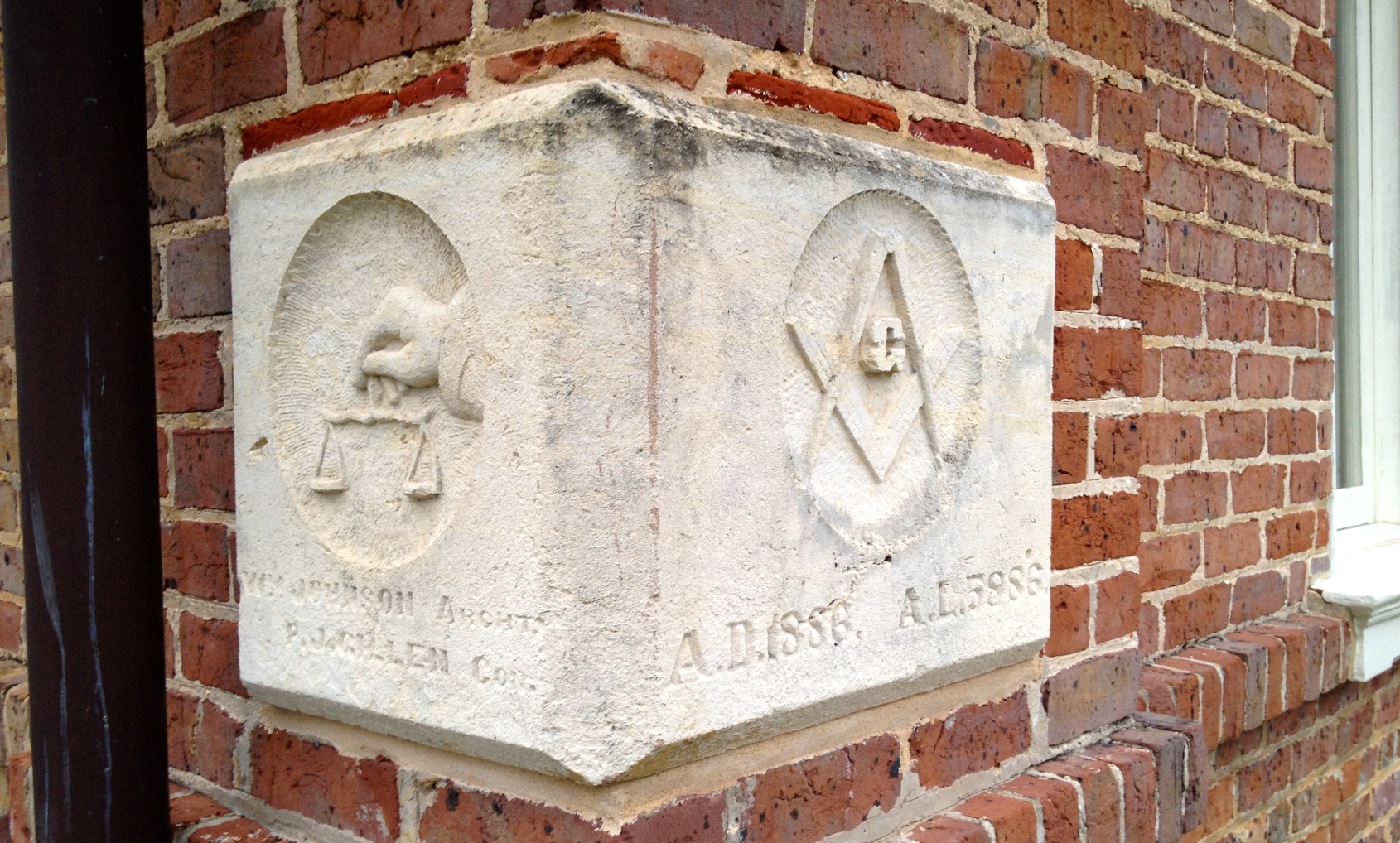 The cornerstone can be found on the southeast corner. 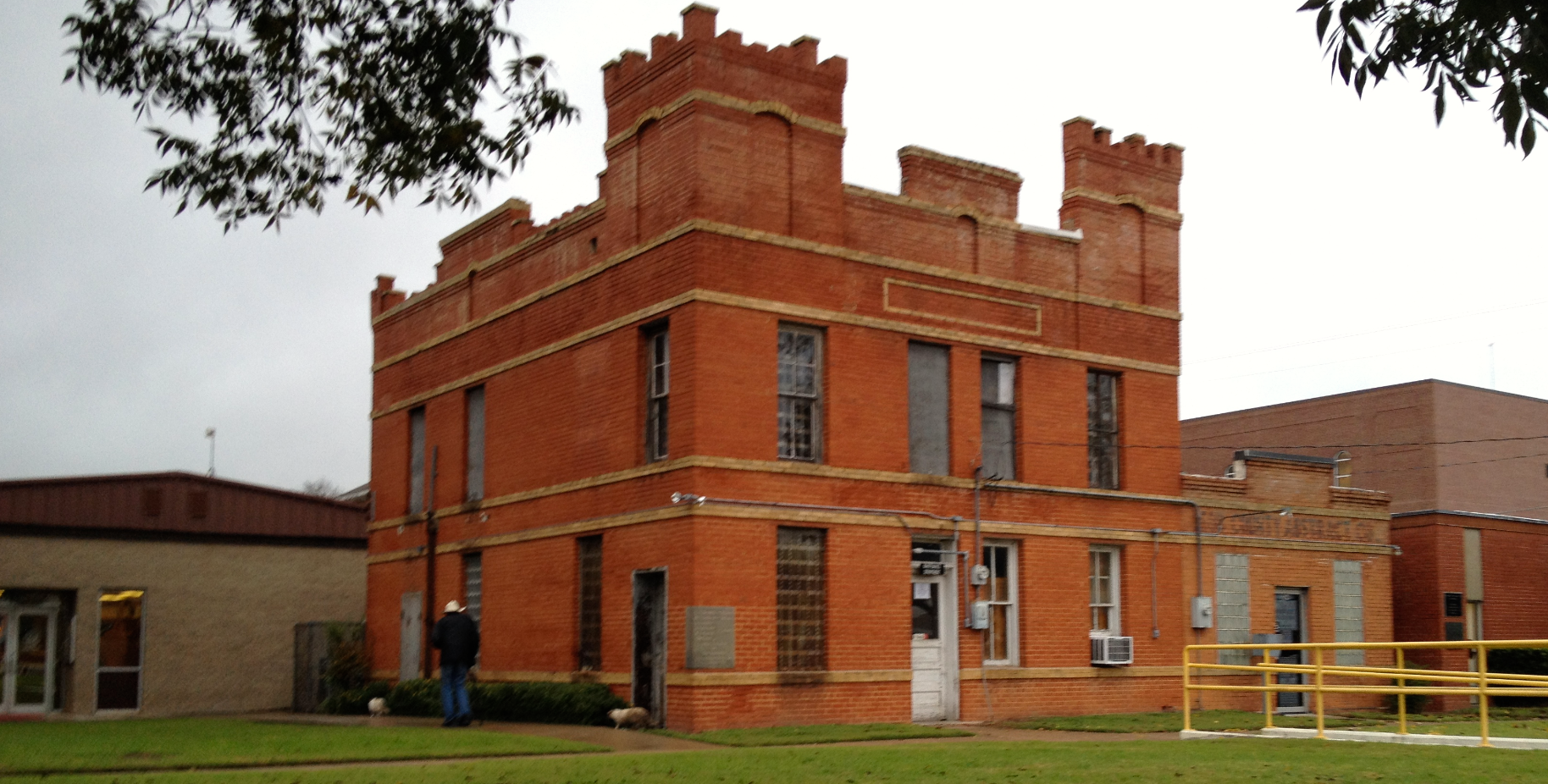 Off to the courthouse’s eastern side is the historic Leon County Jail.