“Land grants in the area were made by the Mexican government as early as 1828 to members of Joseph Vehlein‘s colony. Among the first to receive them were Jacob Masters, who settled ten miles northeast of the site of present Crockett in 1828.”

“In 1837 the boundaries of Houston County were laid out and its government was organized. It was named for President Sam Houston, who signed the order establishing the county on June 12, 1837. Upon its formation from Nacogdoches County in 1837, Houston County included the territory that later became Trinity and Anderson counties and part of Henderson County. Land was donated for the county seat by Andrew E. Gossett, who named it for his father’s friend and former Tennessee neighbor, David Crockett.”

“During the early 1840s the population of the county grew rapidly. In 1847 the number of residents reached 1,929, and by 1850 it stood at 2,721. Many of the early settlers were planters from the Old South who brought their slaves with them, and the early tax rolls of the county show that the number of bondsmen increased steadily during the decade, rising from 308 in 1840 to 545 in 1850.”

“Farming in Houston County was originally conducted on a subsistence basis, but by the late 1840s a thriving plantation economy, based primarily on cotton, had developed. In 1850, Houston County plantations produced 740 bales, and the figure grew rapidly over the next decade.”

“The Civil War and its aftermath brought profound changes to the county.The end of the war brought wrenching changes in the county’s economy. For many Houston County residents, the abolition of slavery meant devastating economic loss. Before the war slaves had constituted nearly half of all taxable property in the county, and their loss, coupled with a sharp decline in property values, caused a profound disruption for most planters.” 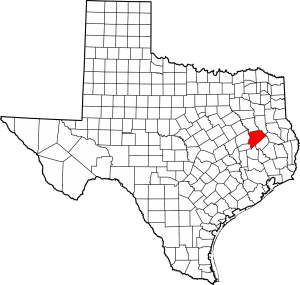 “Although Houston County witnessed little of the violence that many other counties experienced during Reconstruction, the effects of the war were felt for some time, and the economy did not begin fully to recover until 1872, when the Houston and Great Northern Railroad was built through the county. The new railroad provided improved access to markets outside of Texas and brought in large numbers of new settlers, who helped to reinvigorate the county.”

“Since World War II Houston County has been a regional leader in agricultural production. During the late 1940s and early 1950s the farming economy became increasingly diversified. Truck and fruit farming were introduced and greater emphasis was placed on the dairy industry and poultry production. Bruce plums were also grown in large quantities around Grapeland. In the early postwar years cotton was still being grown in large amounts, with some 15,000 bales reported in 1951, but as the decade wore on, peanuts, corn, sorghum, tomatoes, beans, and other crops gradually grew in importance.”

“During the 1960s stock farming gradually replaced crop farming as the leading agricultural pursuit, and by the early 1980s, 86 percent of the county’s farm income was from livestock and livestock products. In 1982, 55 percent of the land in the county was in farms and ranches, with 14 percent of the land under cultivation and 3 percent irrigated; that year Houston County ranked ninety-first of the 254 Texas counties in agricultural receipts. The primary crops were rye, hay, cotton, oats, wheat, sorghum, and peanuts; watermelons, peaches, and pecans were also grown in sizable quantities. The leading livestock products were cattle, milk, and hogs.”

“Crockett (population, 6,766) is the county’s largest town and seat of government. Other communities include Grapeland (1,489), Kennard (334), Latexo (334), Lovelady (652), and Ratcliff (106). Some 200 Texas Historical Commission markers identify historical sites and events. Leading attractions in the county include the site of the San Francisco de los Tejas Mission, Davy Crockett National Forest, a visitor’s center and museum in the 1909 Crockett Depot, Houston County Lake, and Lake Ratcliff. The area also offers numerous venues for fishing, swimming, hiking, and other outdoor activities.”

I was the guest of Crockett and Houston County on November 22, 2013. 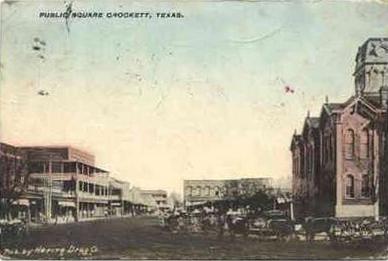 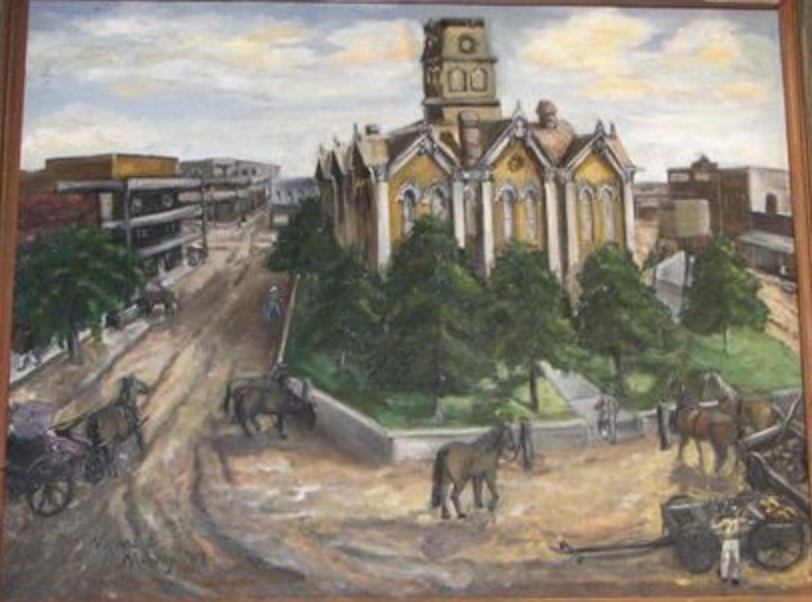 Just over a year after Texas gained its formal independence, on June 12, 1837, President Sam Houston authorized the creation of the first county in the Republic of Texas, joining a rank of twenty-three already extant counties from the days of Spanish and Mexican control. Crockett town fathers Andrew & Elijah Gossett subsequently lobbied to name the county after the president and the county seat after another Texas Revolution hero. I’m sure you can guess which one.

Houston County’s first courthouse was a log structure, built in what records describe was a fort-like style. In fact, it’s reported to have defended town residents against Indian attacks at least once. John Erwin was its architect and contractor, and his work was demolished twelve years later for a newer structure.

In 1851, a two-story, brick courthouse joined the Crockett square, but fire brought it down on February 2, 1865. The origins of that blaze were never resolved.

For four years, court was held in the L.E. Downes building on the Crockett square until J.H. Burnett’s two-story wooden frame building was completed. In 1871, commissioners authorized the addition of a jail building, but it burned during construction. So, another jail was ordered. Naturally, in 1882, that one burned too, taking the courthouse down with it.

That brings the historical narrative to 1883, when Wesley Clark Dodson completed Houston County’s fourth courthouse. And while his three-story, Second Empire creation (pictured above) was being built, county business was held in the Crockett Hotel. For fifty-five years after that this building served. However, at the time of the Great Depression, it was sold to a new owner for a grand total of $1. The only contractual condition was that it be demolished upon sale.

So it was, and it’s assumed the materials salvaged from the old courthouse made their owner a fine bit of profit from his $1 investment. 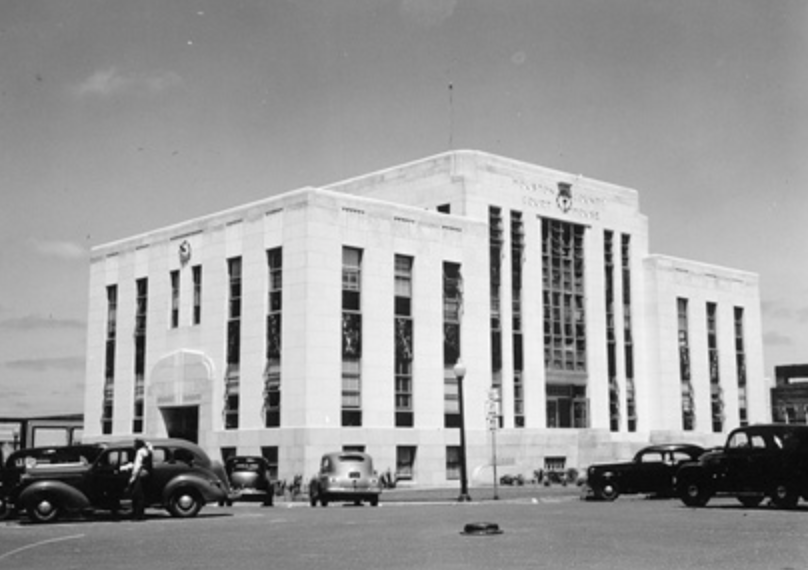 A year earlier, the Houston County commissioners court (with County Judge B. F. Bradley presiding) had begun plans for the construction of a much more modern courthouse to satisfy county needs. With the lot of the previous courthouse cleared and ample funds from the Public Works Administration, local architect Blum Hester and the Eckert-Fair Construction Co. of Dallas brought a fifth courthouse to Houston County.

The northeast corner, at the corner of Houston and 5th

The northwest corner, at the corner of Houston and 4th

The western façade looks down upon 5th Street. 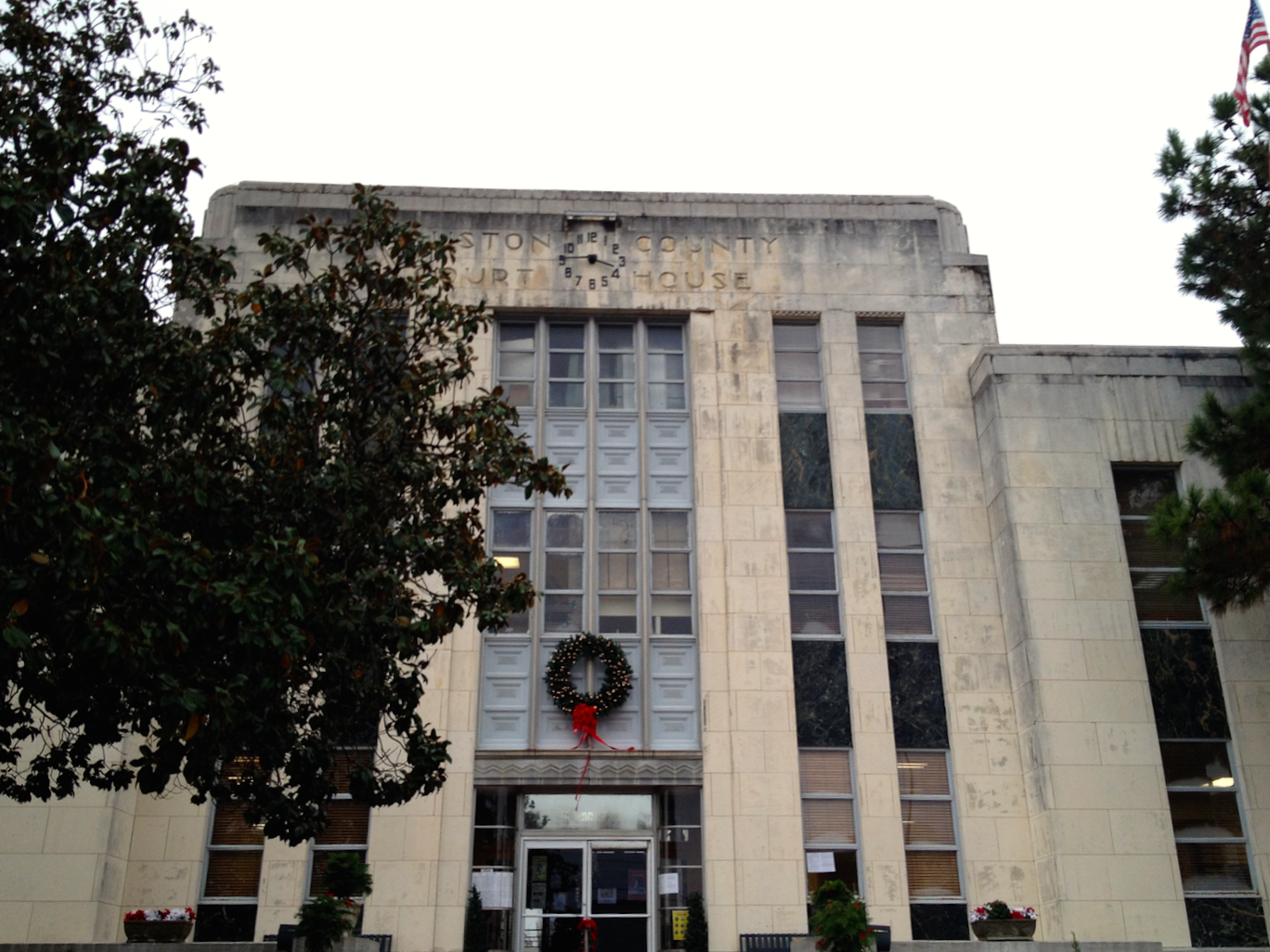 The courthouse lobby, complete with a Christmas tree 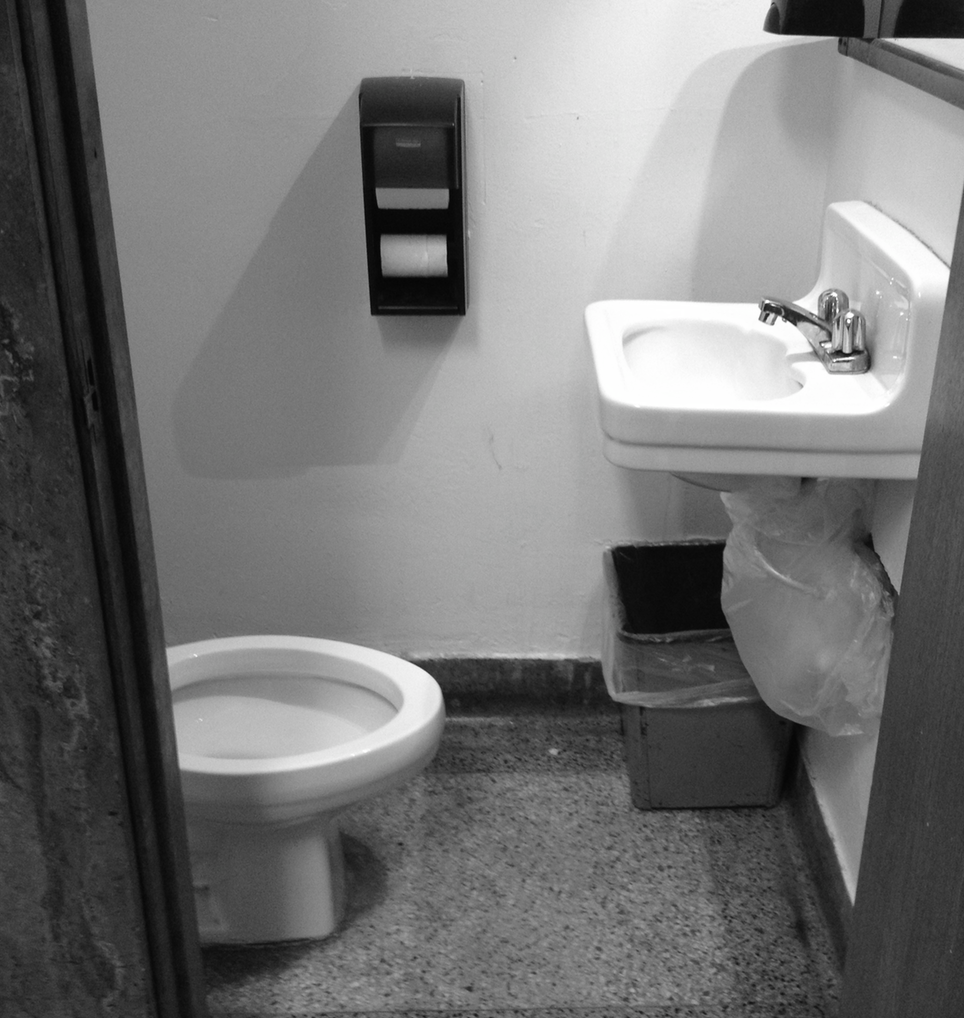 The public restroom in this courthouse is truly the smallest I have ever seen. 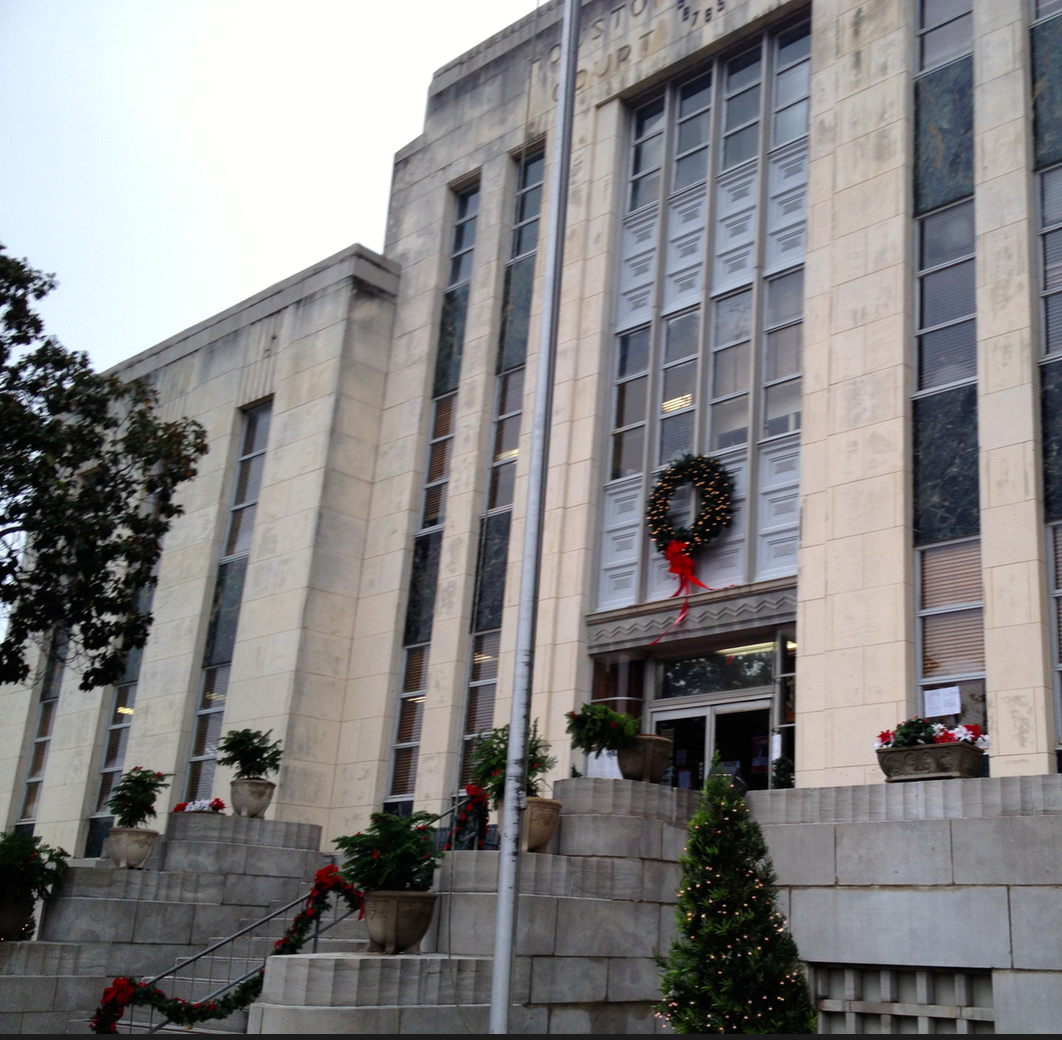 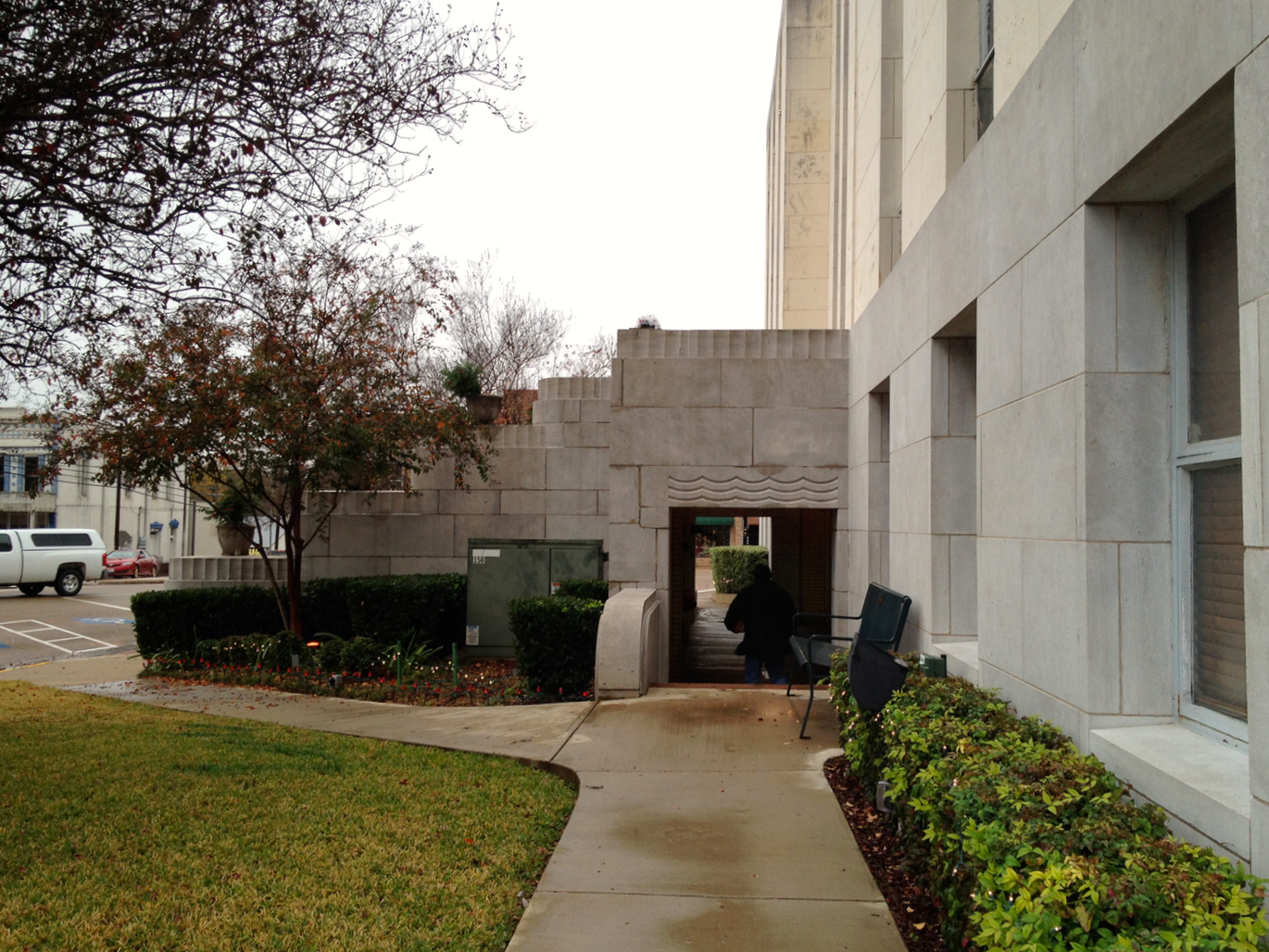 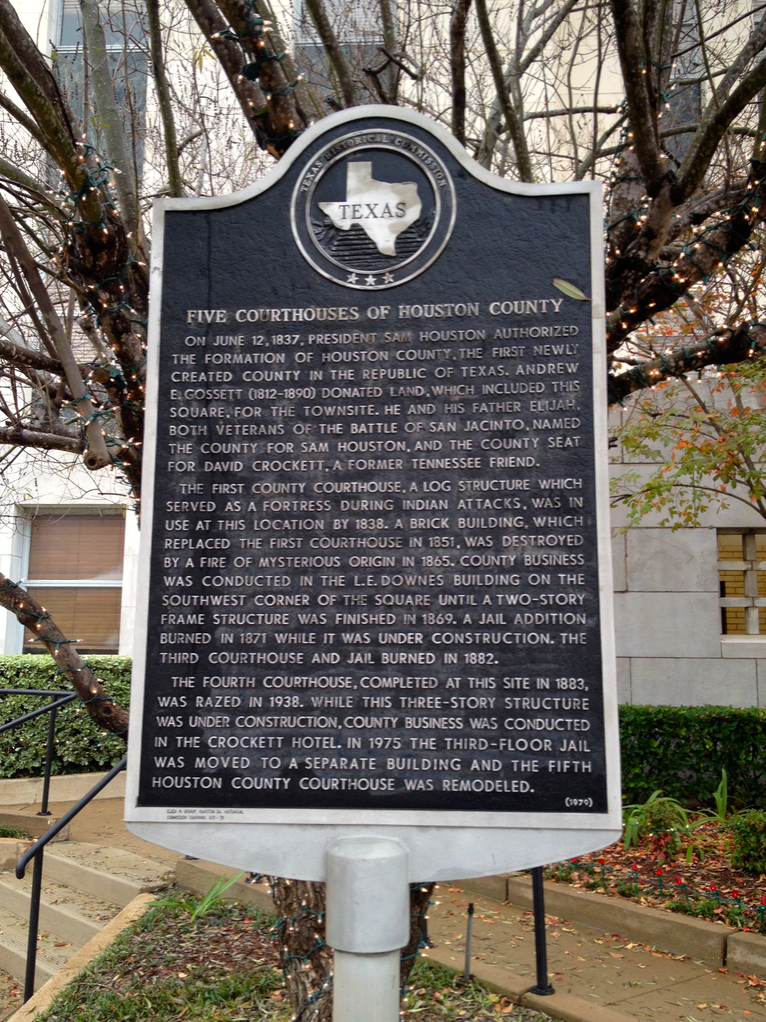 Along Highway 19, north of downtown, I came across this decrepit old building. It was once Mary Allen Junior College, but has since been abandoned. Luckily, things seem to be looking up for the structure, as at the time of my visit I understood it was to be renovated to a museum in the future.