“Anderson County has a total area of 1,077 square miles or 689,280 acres. The county is partly in the Texas Claypan area and partly in the East Texas Timberlands of the Southern Coastal Plains.”

“In 1826 empresario David G. Burnet received a grant from the Mexican government for colonization of the area that is now Anderson County.”

“On June 10, 1835, Willison Ewing and Joseph Jordan bought a tract of land, which is now the John H. Reagan homesite, about two miles southeast of the present city of Palestine, and erected Fort Sam Houston as protection from the Indians. In 1836 a settlement known as Fort Houston grew at this site. During the incursion of Antonio López de Santa Anna in the spring of 1836 most of the settlements west of the Trinity were destroyed.”

“After the removal of the Indians in the 1840s, settlement proceeded rapidly until the area had sufficient inhabitants to form a new county. In response to a petition presented by settlers at and around Fort Houston, the First Legislature of the state of Texas formed Anderson County from Houston County on March 24, 1846.”

“A suggestion was made that the new county be called Burnet in honor of David G. Burnet. The county was named Anderson, however, after Kenneth Lewis Anderson, a prominent member of Congress and the last vice president of the Republic of Texas.”

“Fort Houston was two miles from the center of the county, so a committee, composed of Dan Lumpkin, William Turner Sadler, and John Parker was appointed to lay out the site for and name a new county seat. They chose a 100-acre tract in the center of the county. The Parkers had come from Palestine, Crawford County, Illinois, and upon their suggestion, the new county seat was named Palestine.”

“On July 30, 1846, the first session of the Anderson County court was called. Road building was of foremost importance, and a road from Palestine to the Neches River was ordered. Other roads from Palestine to Fort Houston, Parker’s Bluff, Cannon’s Ferry, and Kingsboro in Henderson County followed. Authorization for construction of a courtroom and jail with an underground dungeon was given. In August 1846 a county tax was levied, and Thomas Hanks was appointed county treasurer. In October election precincts were arranged. District court was held on November 9, 1846, with Judge William B. Ochiltree, of the sixth judicial district of Texas, presiding. The first cases were civil cases involving title to land and slaves.”

‘In 1851 the Palestine Masonic Institute was established, with both male and female departments. In 1856 it became Franklin College. When the male department failed, the Palestine Female College was formed and stayed in operation until 1881, when a vote was taken to establish public schools.”

“When the Civil War broke out, Anderson County almost unanimously supported secession and sent her ablest men to fight. Judge John H. Reagan served in the cabinet of the Confederate government as postmaster general. Even after the defeat of the South, Anderson County resisted federal rule. During Reconstruction, one loyalist called District Judge Reuben A. Reeves, a resident of Palestine, “the greatest curse of the latter part of the nineteenth-century so far as this District is concerned” because of his refusal to allow blacks to participate as jurors in the judicial process.”

“Between 1880 and 1940 Anderson County was predominantly agricultural. Corn, cotton, sweet potatoes, hay, and, by the 1920s, peanuts were the most important crops. The timber industry gained importance in the 1930s. Between 1940 and 1982 the number of farms dropped by 70 percent, from 4,422 to 1,356. Crops that remained important in the 1980s included peanuts, sweet potatoes, hay, and fruits and nuts.”

“In January 1928 the first successful oil producer in Anderson County, known as the Humble-Lizzie Smith No. 1, was brought in. The discovery brought prosperity, and this may account for the county’s voting Republican in the 1924 and 1928 elections. The oil discoveries also meant that the Great Depression had a less severe impact than elsewhere.”

“Manufacture of diverse products, including glass containers, garments, automotive parts, metal and wood products, aluminum, and furniture played an important role in the economy of the county. Manufacturing-related and retail employment rose from 2,006 in 1965 to 3,663 in 1980, accounting for over 55 percent of total employment. Oil and natural gas discoveries, valuable timber regions, rich ranchlands for grazing cattle, iron ore deposits, and the conversion to peanut production kept the price of farm and ranch land steadily increasing. Three units of the Texas Department of Corrections were located at Tennessee Colony in the northwestern part of the county.”

“Palestine (population, 18,922) is the county’s largest town and seat of government; other communities include Cayuga (137), Elkhart (1,382), Frankston (1,196), Montalba (110), Neches (175) and Tennessee Colony (300). The county attracts numerous visitors, who go there to enjoy the beautiful Dogwood Trails in the spring, balloon launchings at the United States government’s Scientific Balloon Base, picturesque train rides to Rusk on the Texas State Railroad, the Engeling Wildlife Management Area, the 900 acre Palestine Community Forest, and other historic sites and museums. Educational opportunities increased with the opening in 1980 of Trinity Valley Community College in neighboring Henderson County.”

I was the guest of Palestine and Anderson County on November 22, 2013. 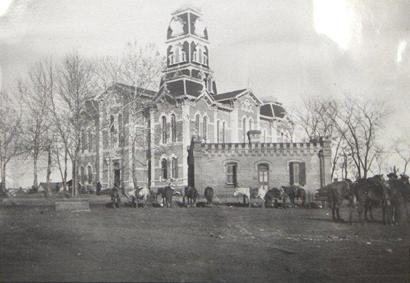 The 1885 courthouse was the design of Wesley Clark Dodson. Unfortunately, it burned in 1913. 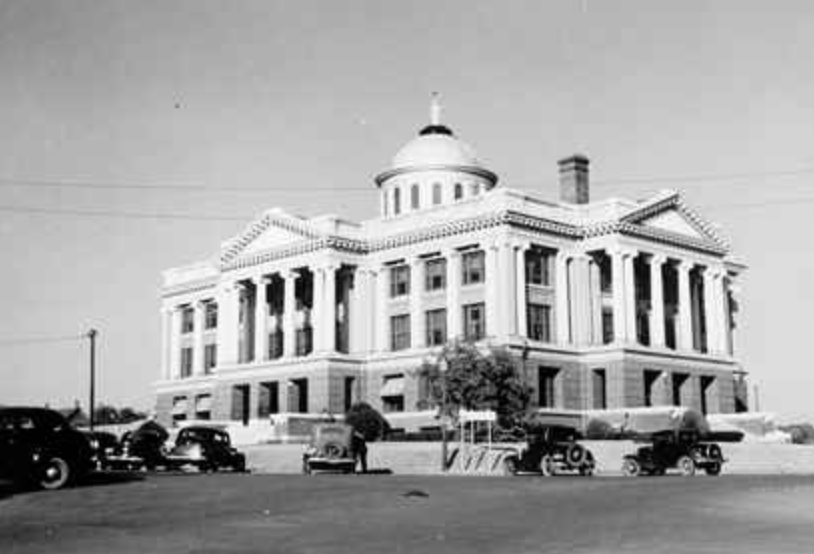 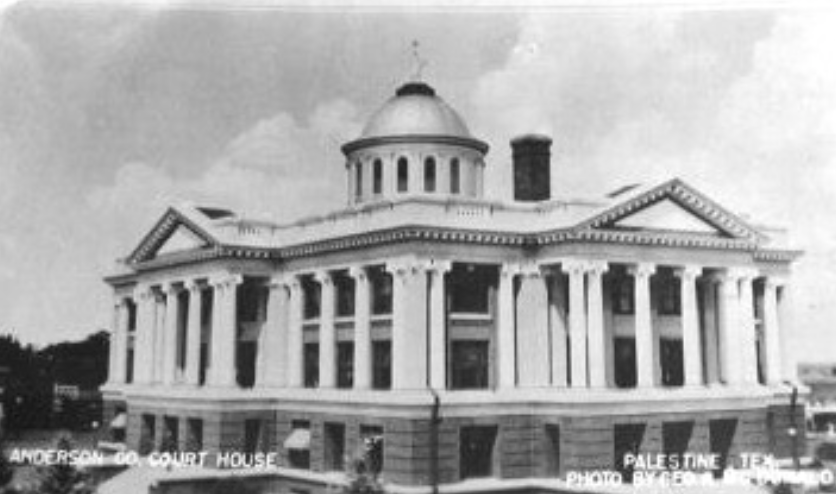 Major renovations were undertaken in 1986 throughout the whole courthouse, and the law library got a large ‘facelift’ in 1995. 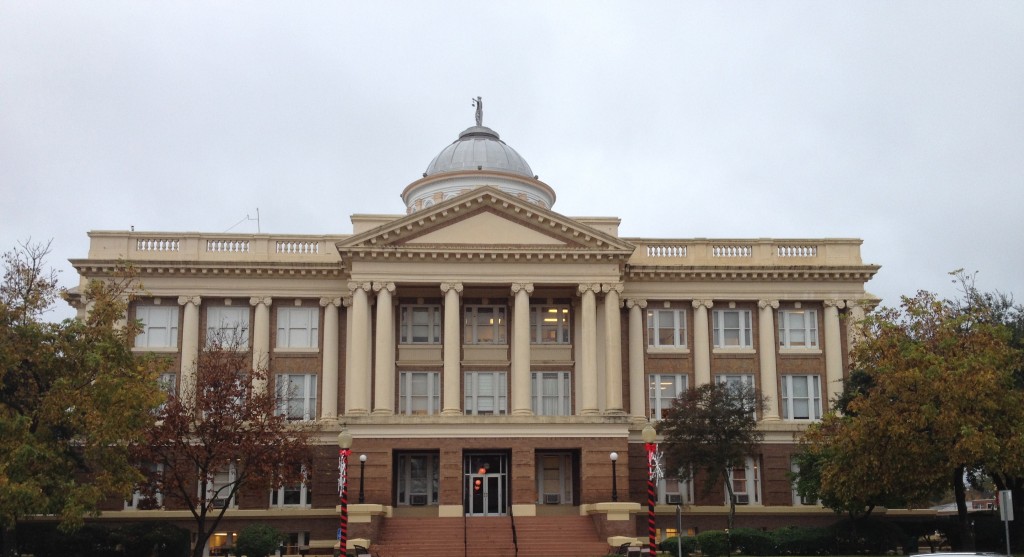 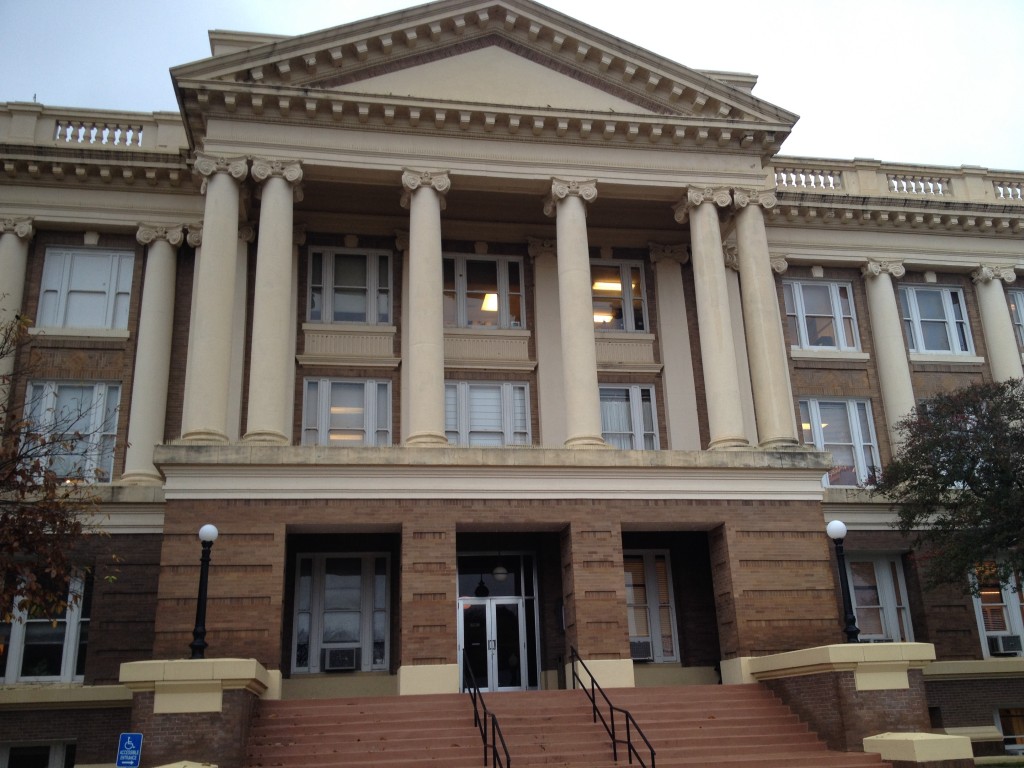 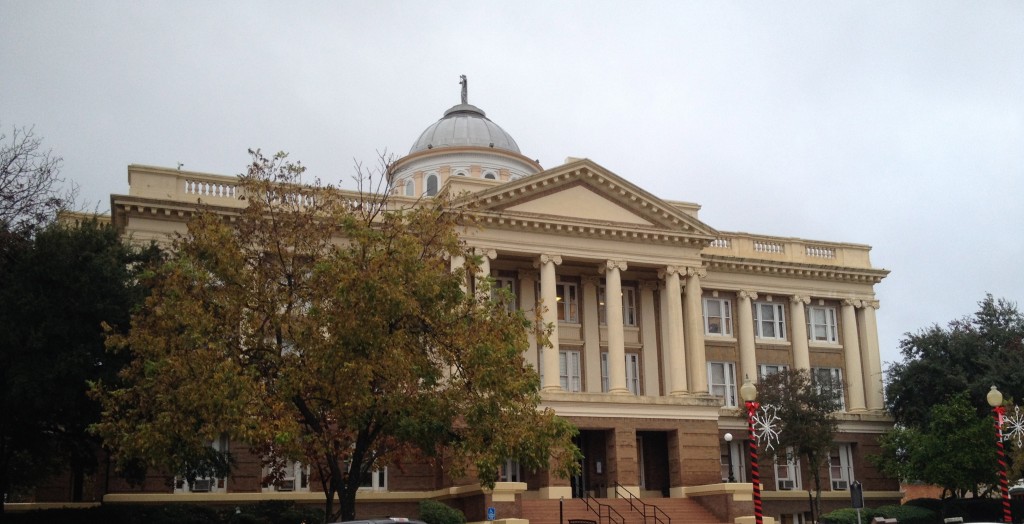 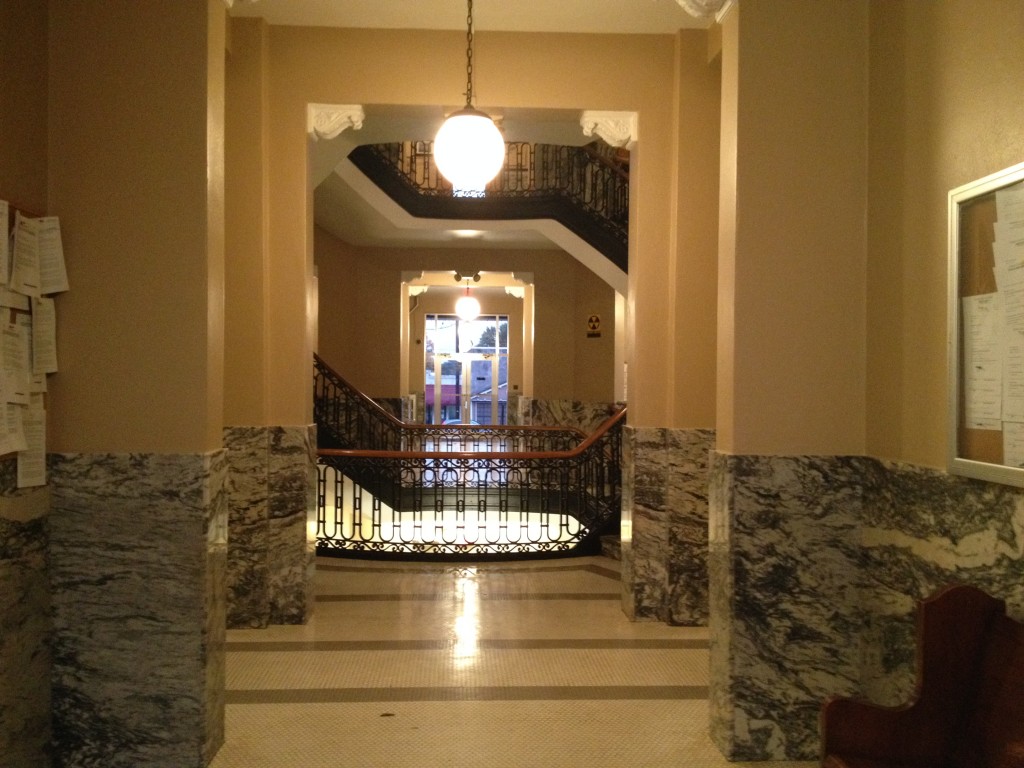 This courthouse has a strikingly impressive interior. 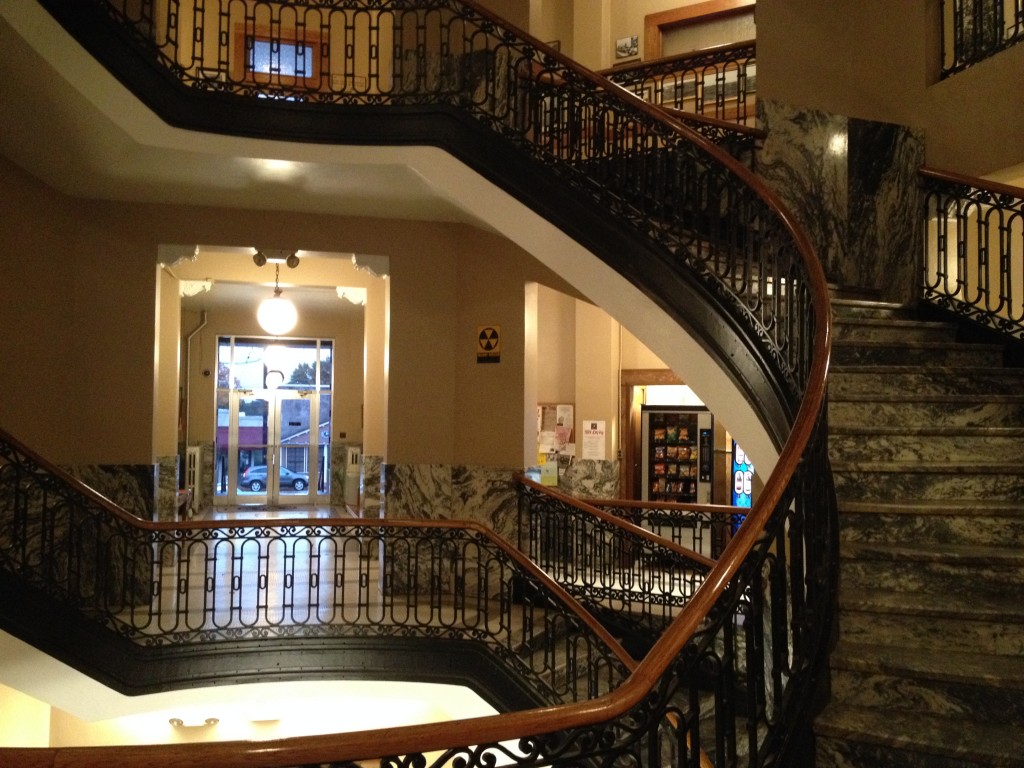 The rotunda features a massive staircase that winds up and down to all floors. 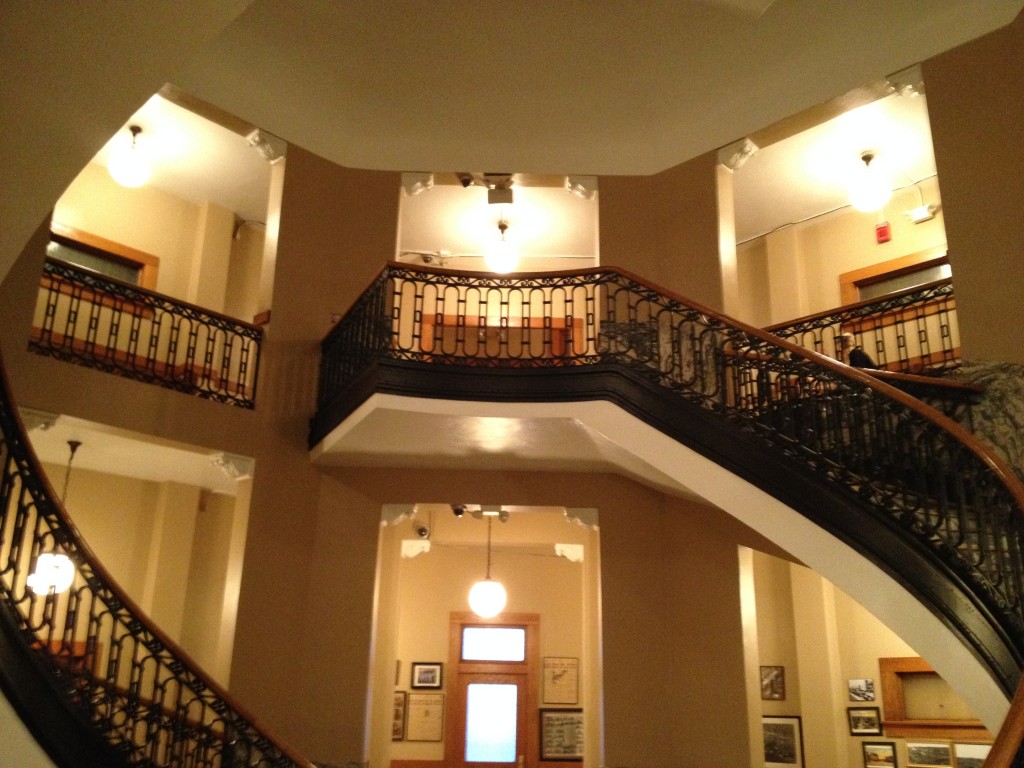 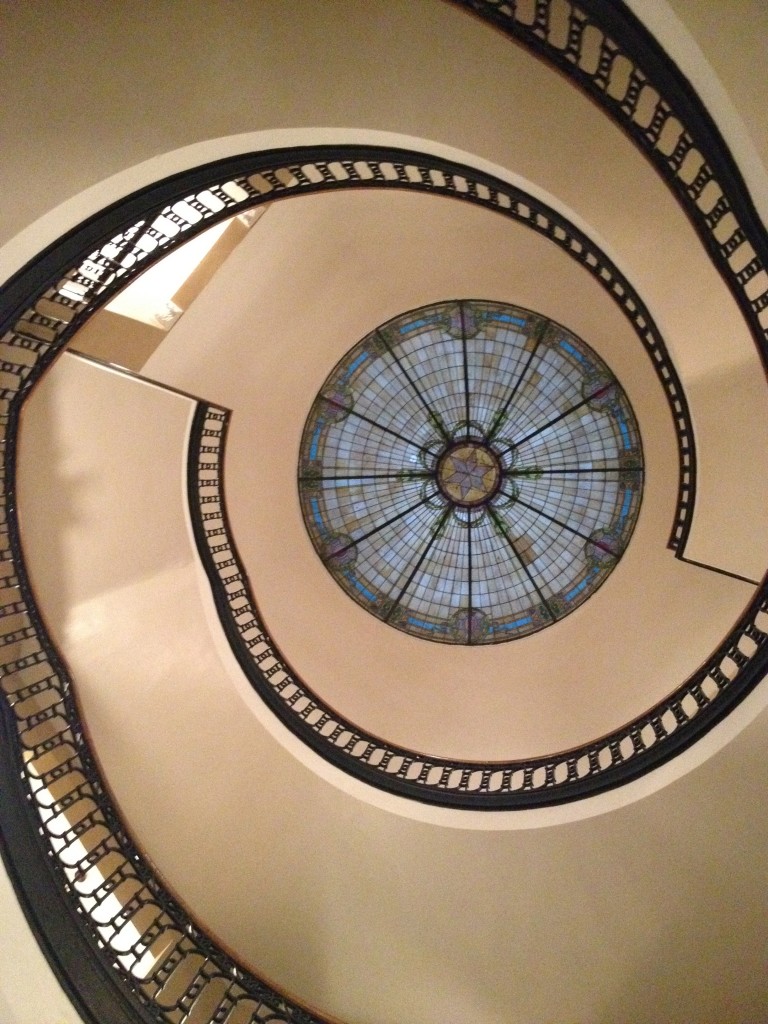 A mural lies at the bottom of those stairs.

A helpful security guard saw us taking pictures and allowed us to see and photograph Judge Bentley’s private chambers. Inside were piles upon piles of miscellaneous items that warranted some photos. 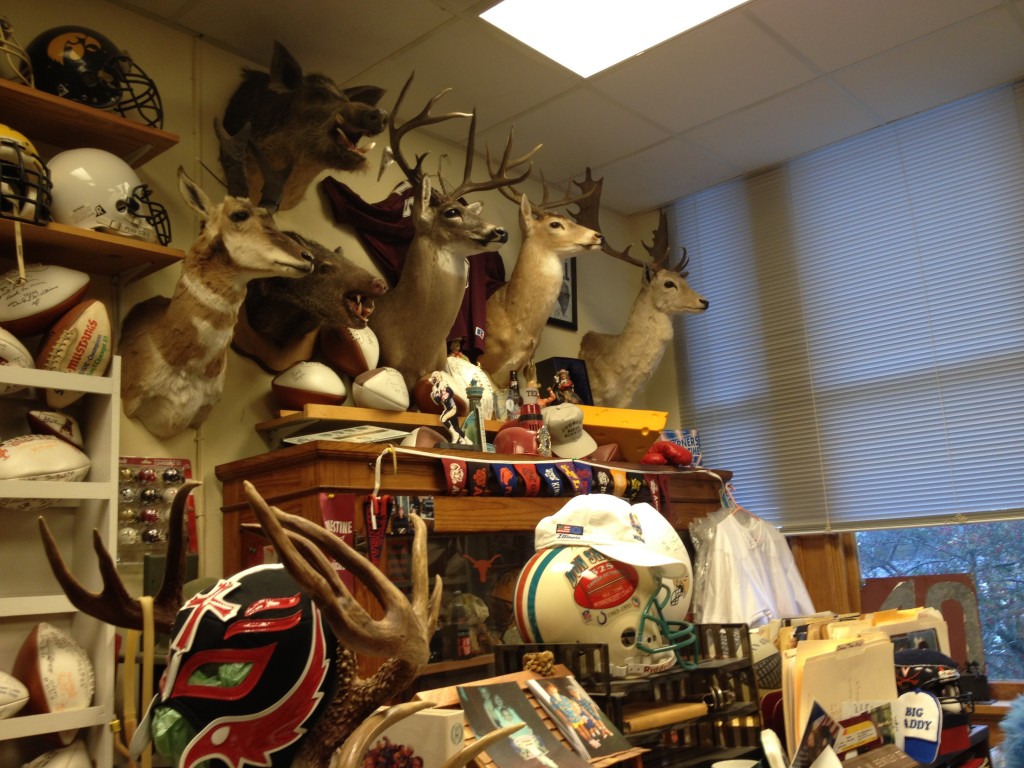 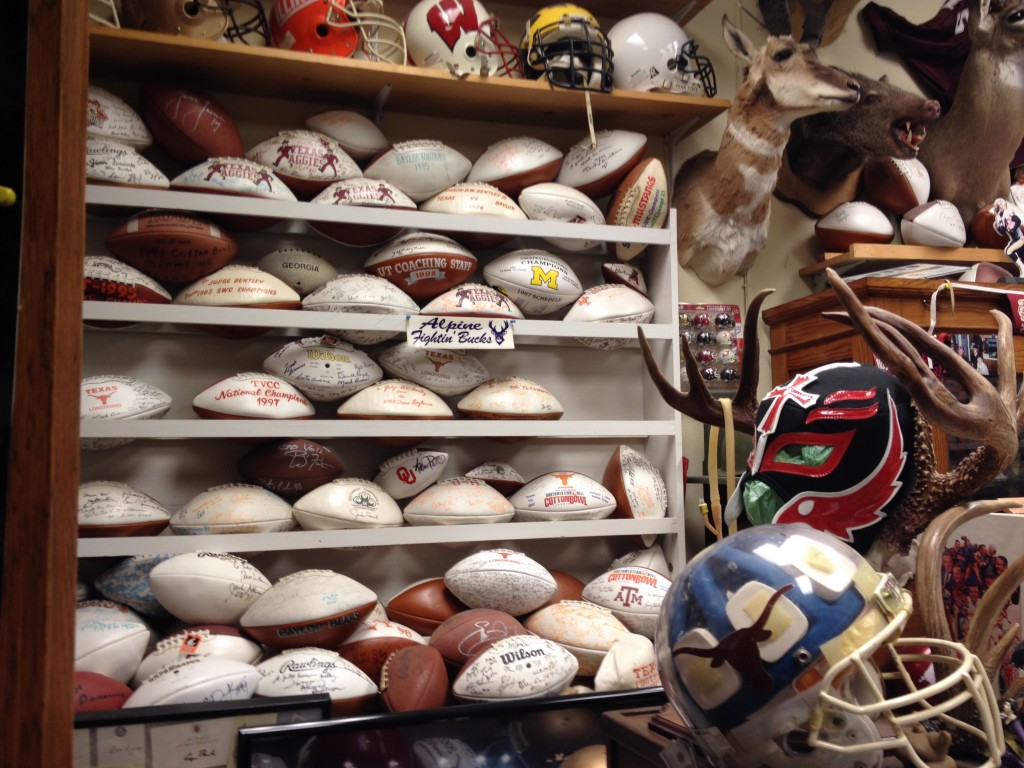 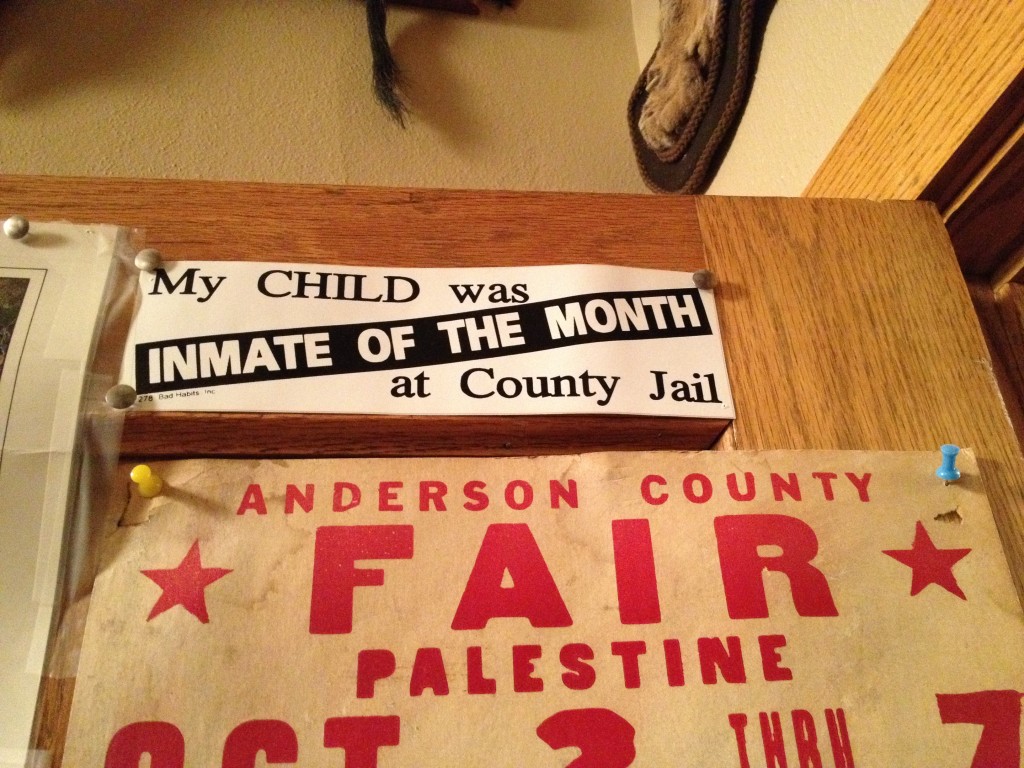 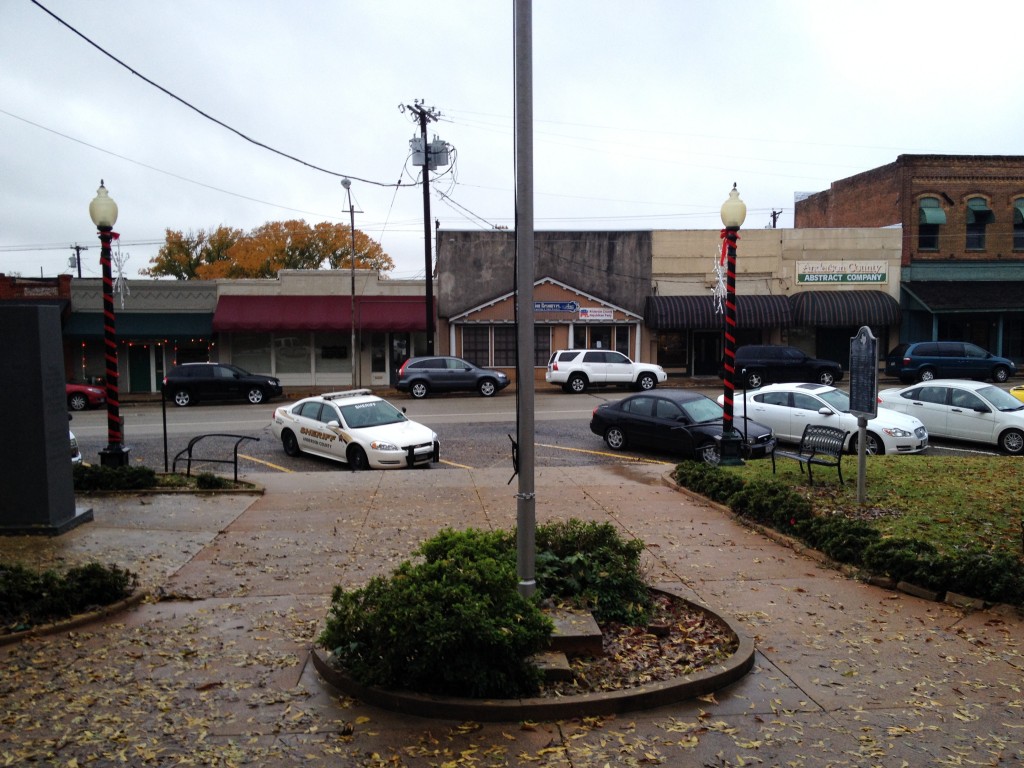 Church Street, as scene from the western entrance 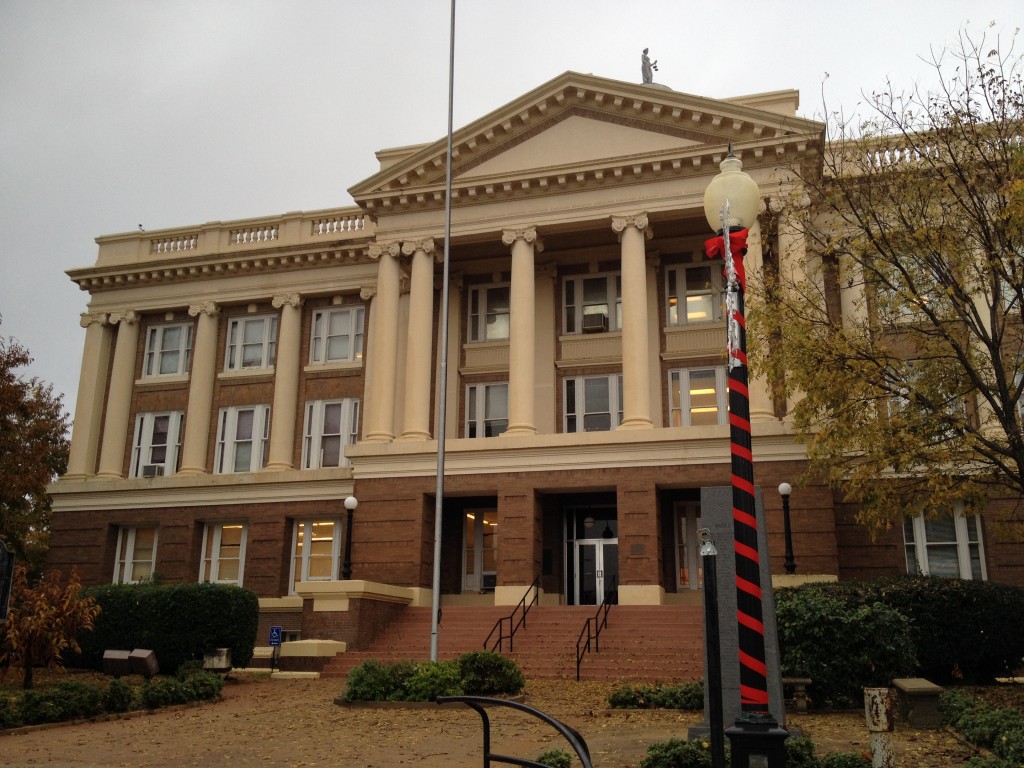 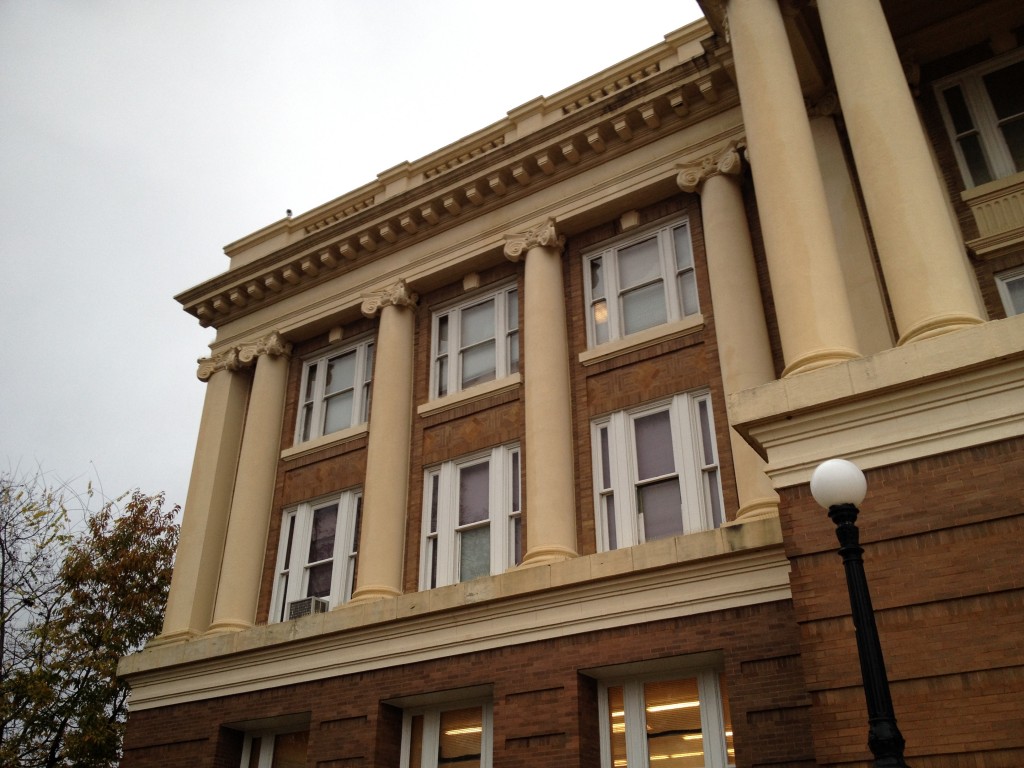 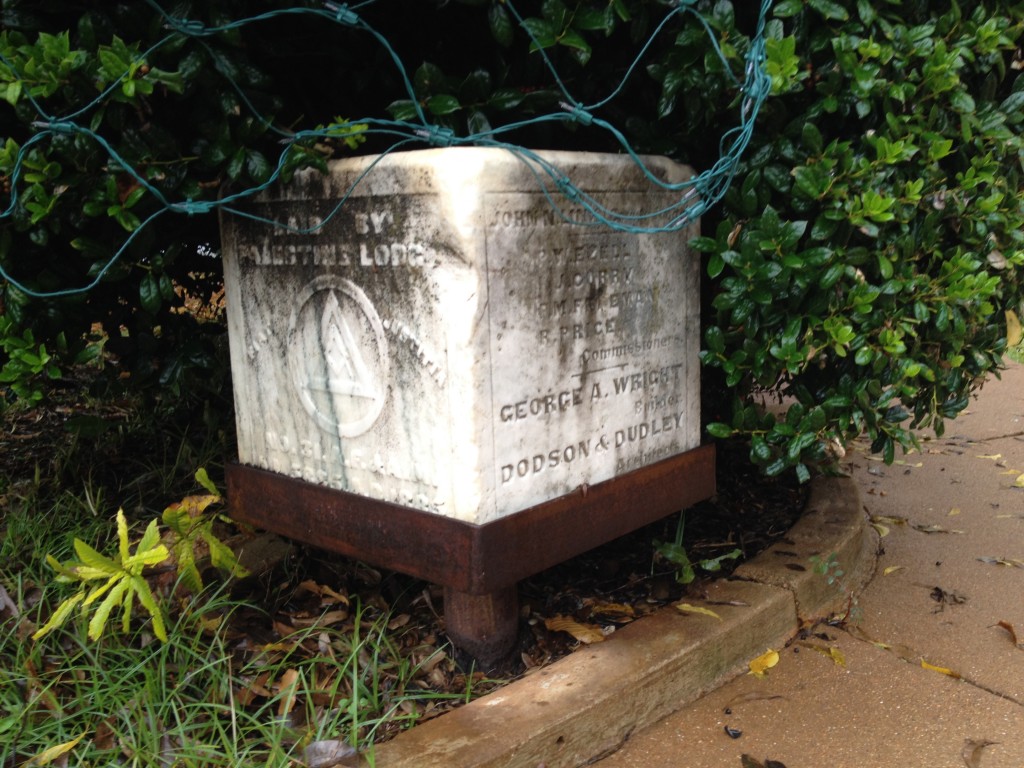 The cornerstone from Dodson’s 1885 courthouse is displayed near the western entrance. 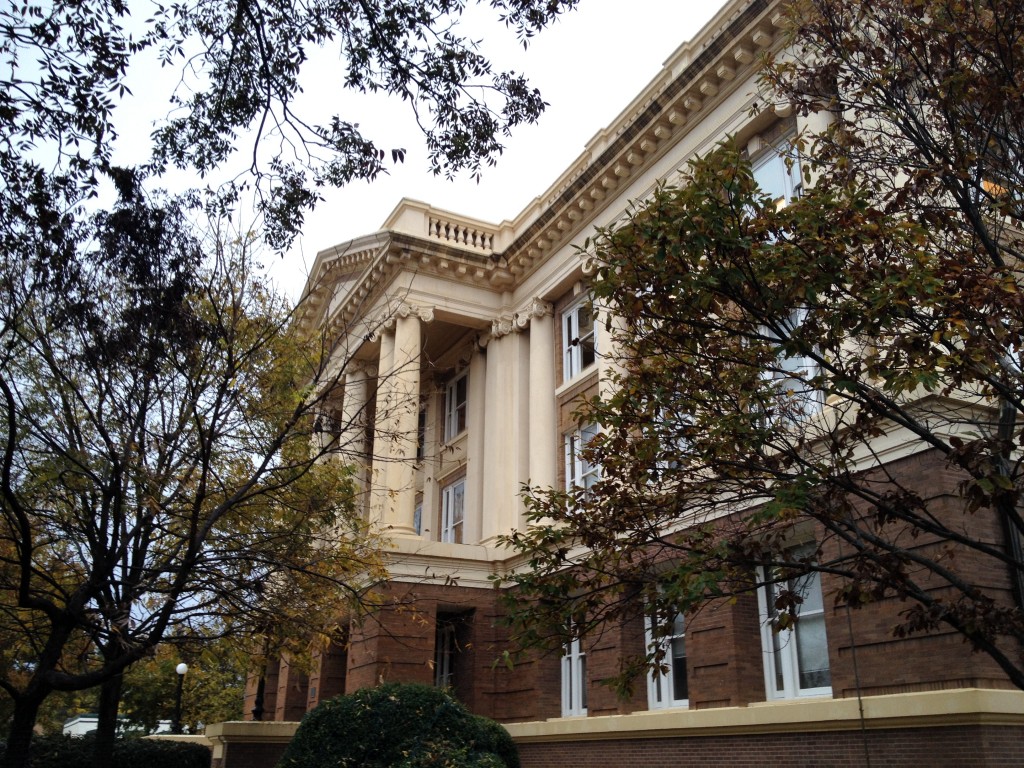 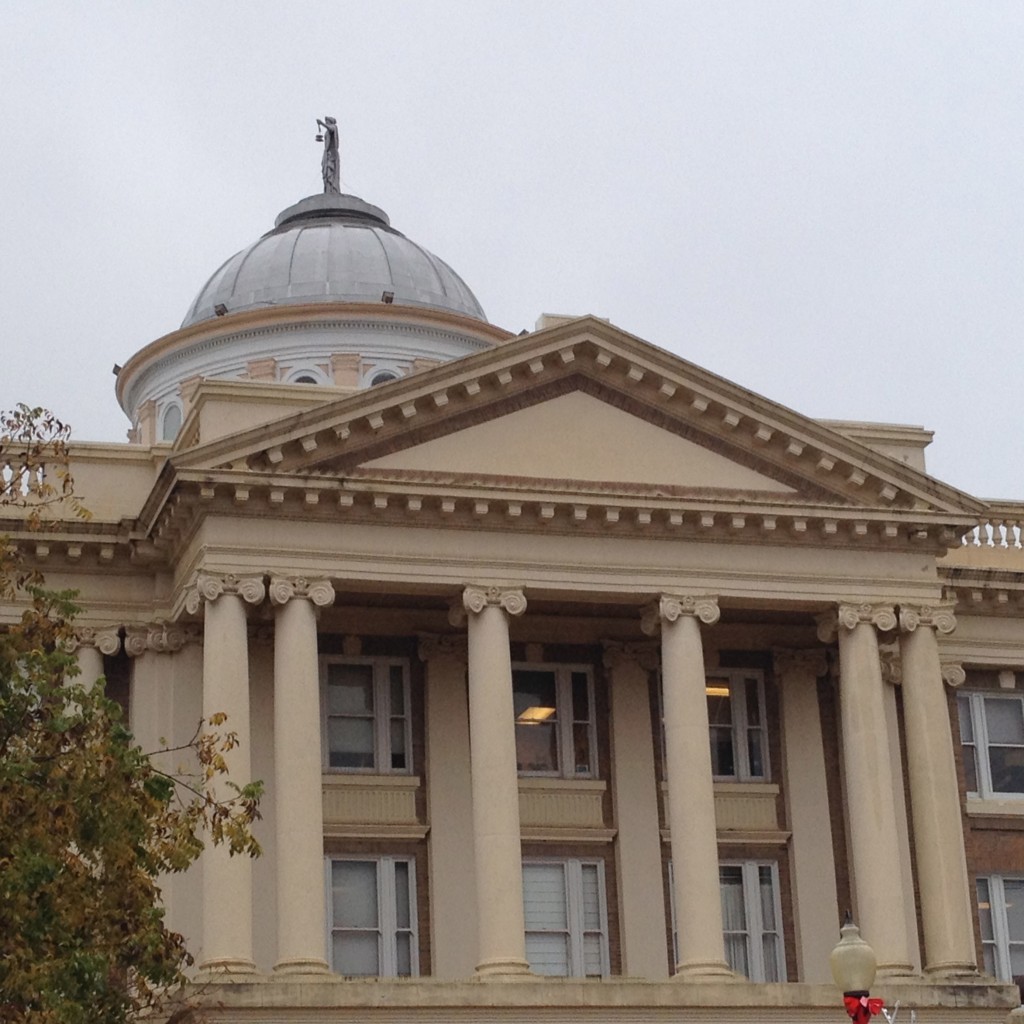